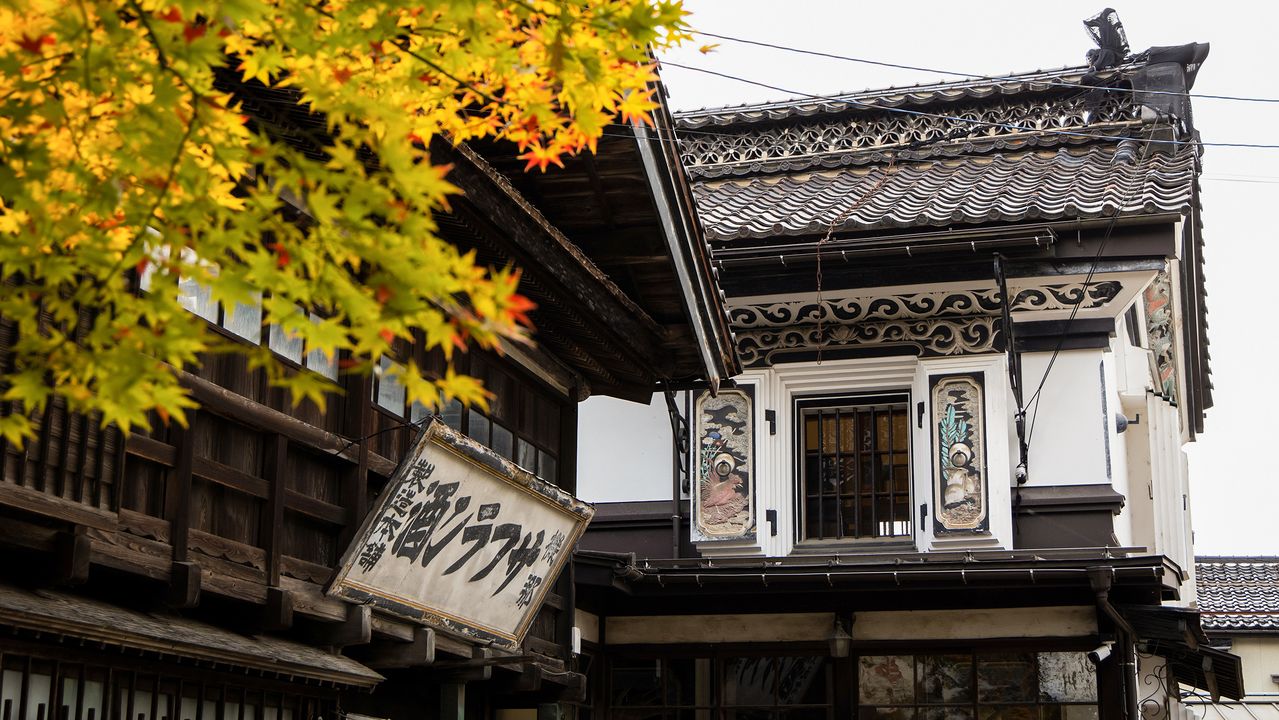 Settaya: A Historic Niigata Town of Breweries, Storehouses, and Gardens

A Window into the Past

The district of Settaya in Nagaoka, Niigata Prefecture, sets several kilometers south of the city center. The area is dotted by historic structures dating from the Meiji (1868–1912) and Taishō (1912–1926) eras, including a number still in use by traditional manufacturers, such as a 470-year-old sake brewer and a maker of dashi-flavored soy sauce founded in 1831. 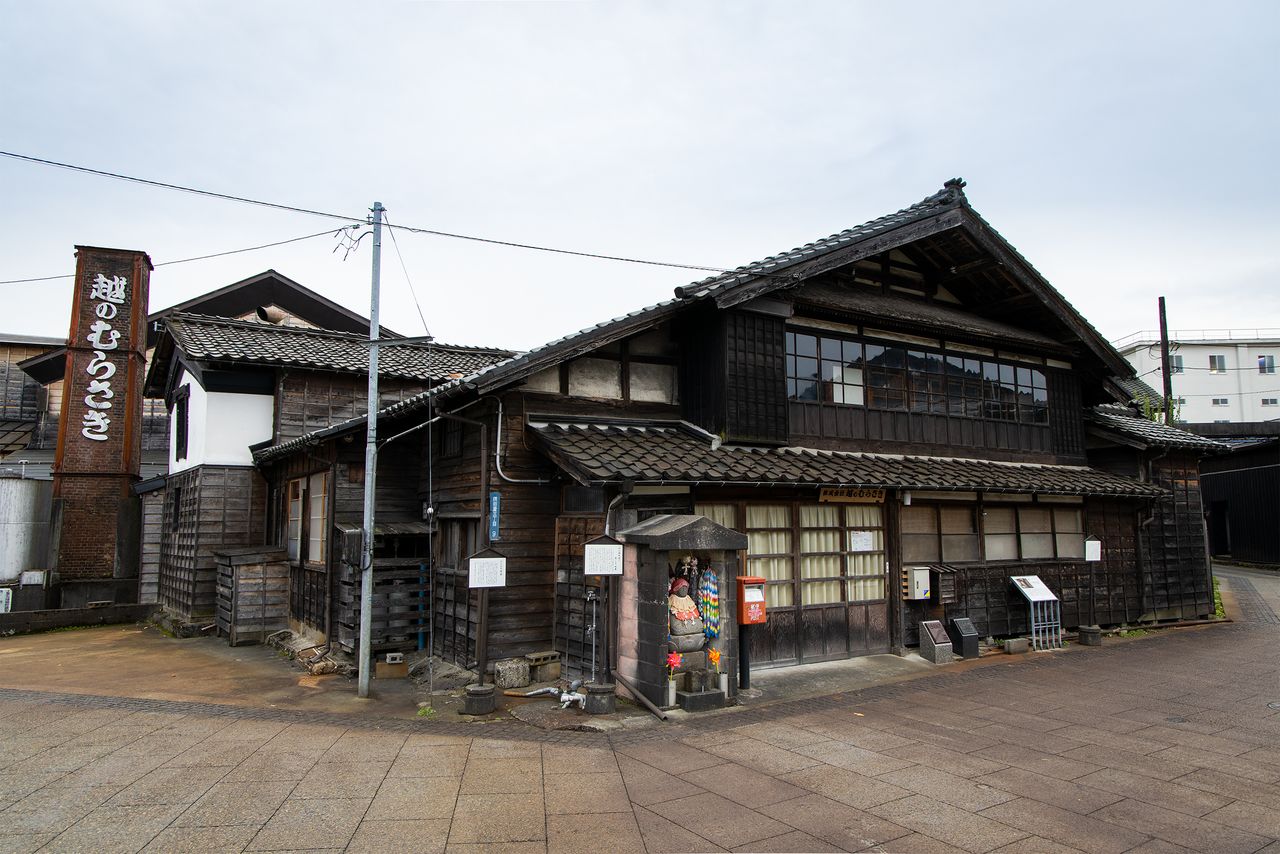 The headquarters of soy sauce brewer Koshino Murasaki was erected in 1877. The main building and storehouse behind are registered as cultural properties, while the brick chimney standing to the left is a Settaya landmark. 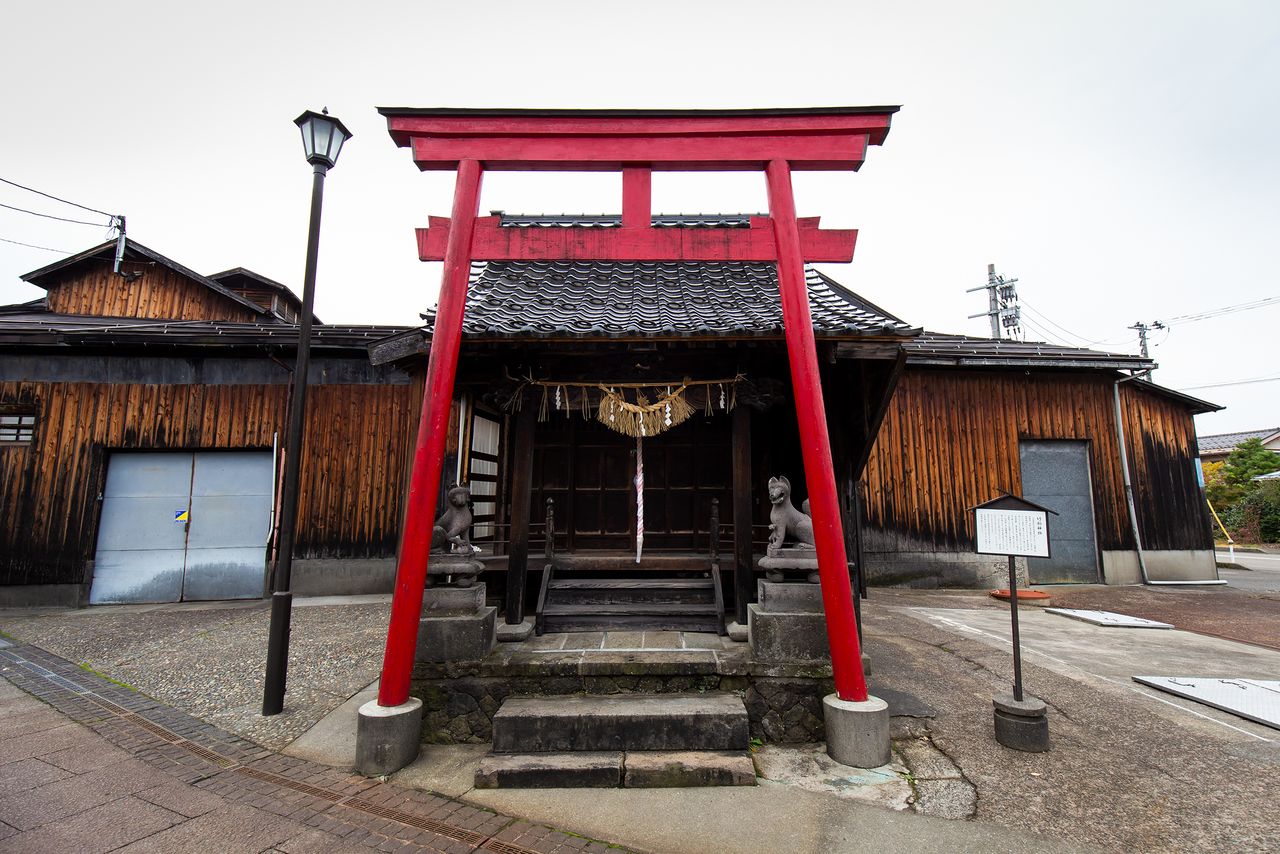 Takekoma Inari Shrine stands adjacent to the Koshino Murasaki property. The baby fox cuddled up to the guardian fox figure on the right adds charm.

Settaya lies on the Mikuni Kaidō, an ancient and important road that connected the region to the main highway, the Nakasendō. The local lord and daimyo from domains further to the north traversed the road when they journeyed to and from Edo (present-day Tokyo), as required by the shōgun under the sankin kōtai system. Some say that Settaya owes its name to the fact that it was a way station that offered food and accommodation (settai) to travelers.

Well situated for both river and road traffic, Settaya was directly managed by the shogunate and was part of the estate of Kan’eiji, an influential family temple of the ruling Tokugawa clan. This shielded Settaya from the heavy-handed regulations of domain officials, allowing production of fermentation goods like sake, miso, and soy sauce to flourish. 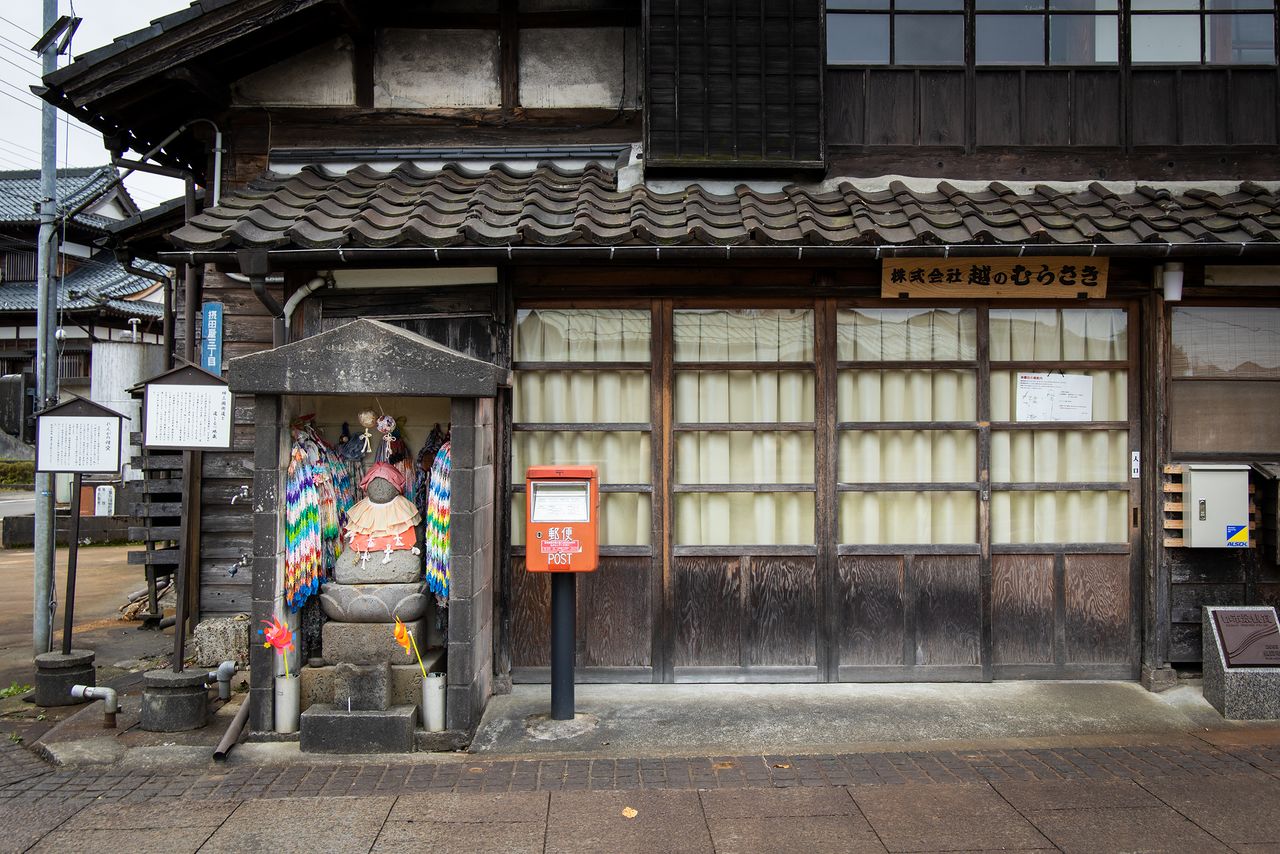 A small shrine dedicated to the Buddhist divinity Jizō in front of Koshino Murasaki served as a road marker on the Mikuni Kaidō. The base carries a carved inscription telling travelers “right to Edo, left to mountains.” 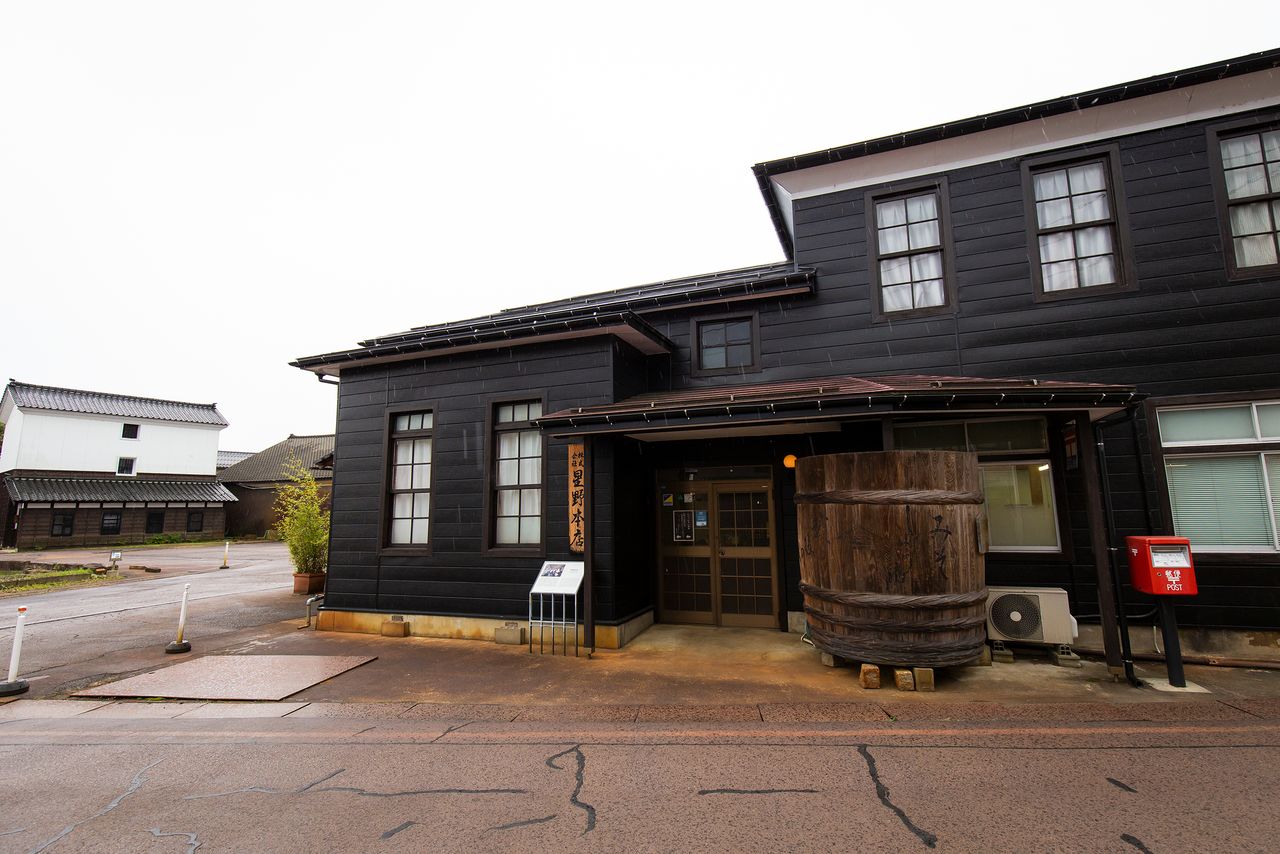 A large wooden tub stands in front of Hoshino Honten, a manufacturer of miso and soy sauce. The storehouse at the far left, registered as a cultural asset, is notable for having three stories.

Settaya continued to prosper into the twentieth century and miraculously survived the fire-bombings at the end of World War II that leveled much of Nagaoka. Among the businesses still manufacturing products using traditional methods, five have building registered as cultural properties, a testament to the care shown in preserving these historic structures. 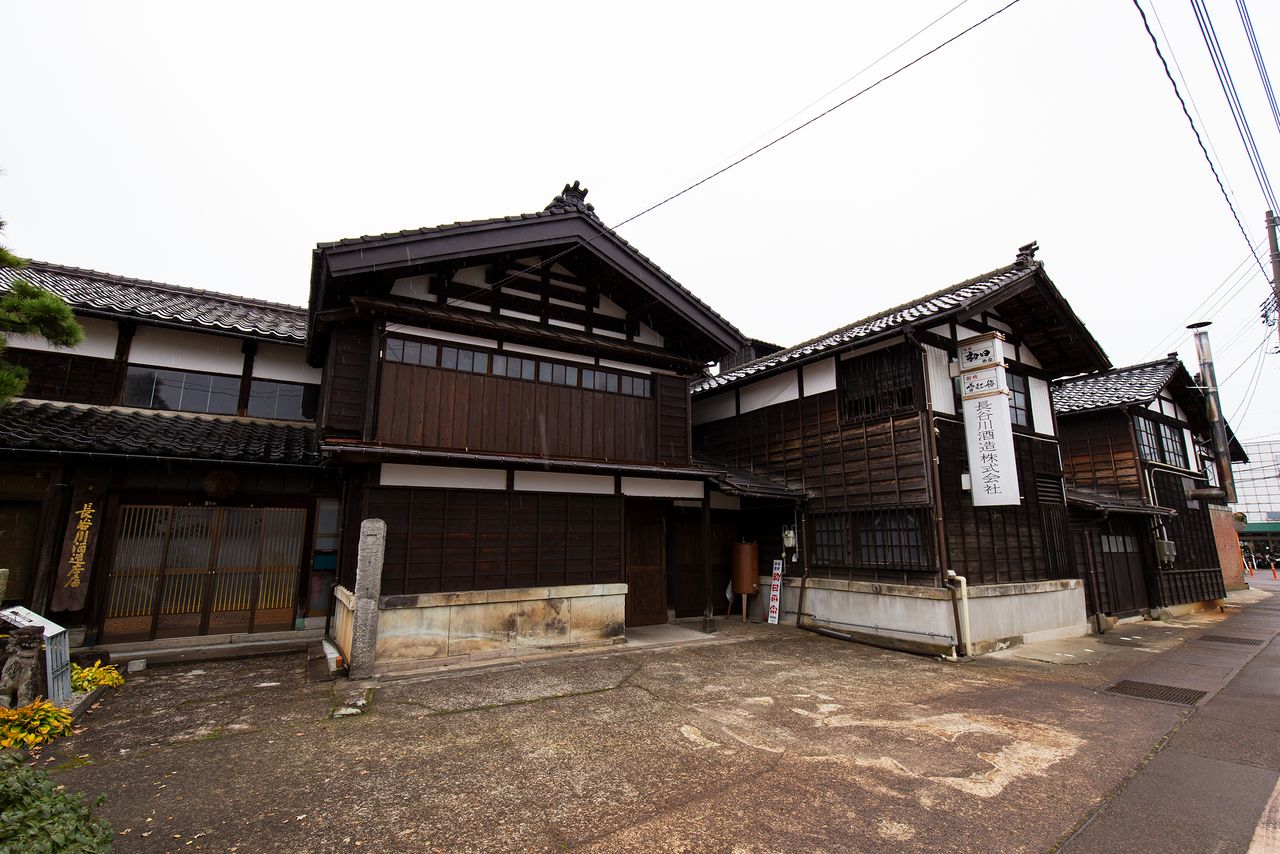 The main structure of brewer Hasegawa Shuzō, maker of sake brand Echigo Sekkōbai, was built in 1886 and refurbished in the mid-1920s. It is registered a cultural property. 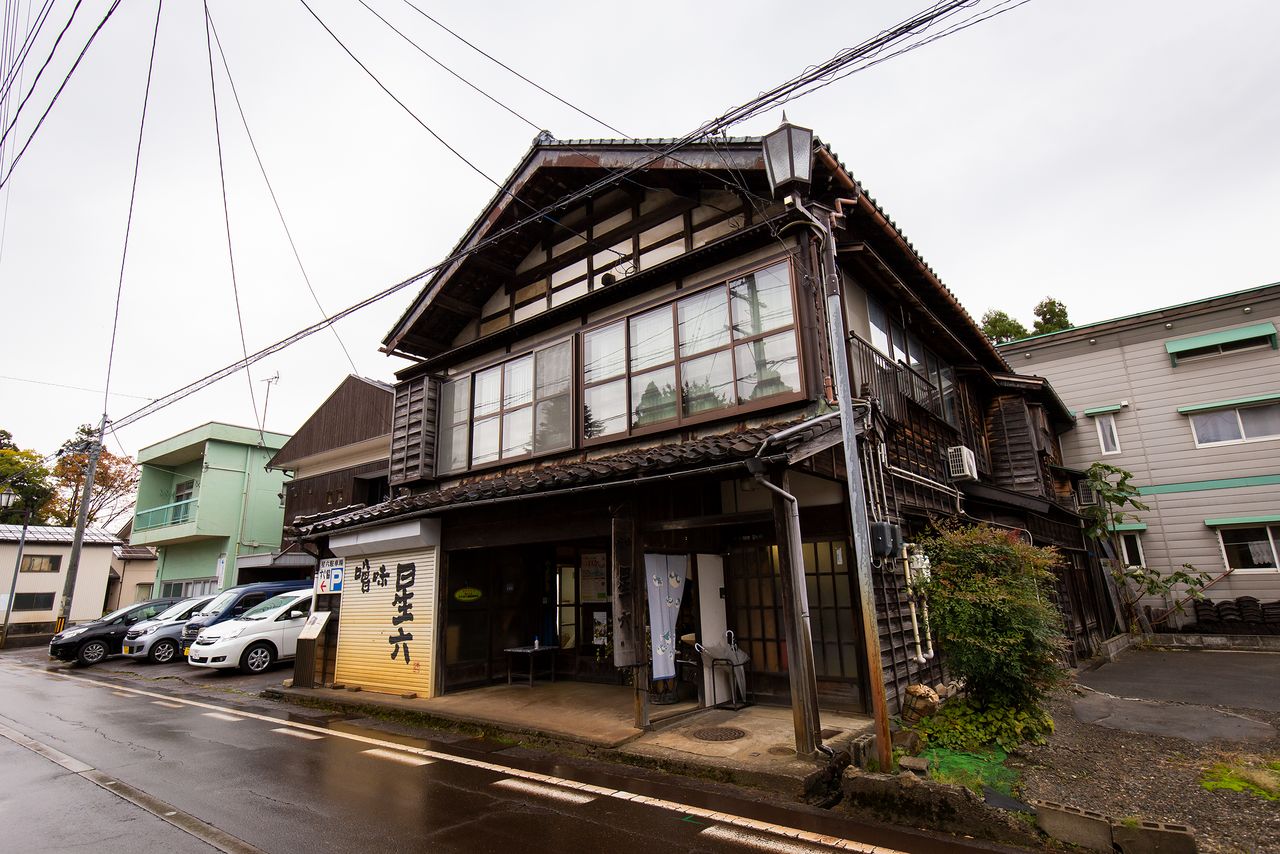 Miso Hoshiroku continues making its products using traditional methods. This storehouse, registered as a cultural property, gained nationwide fame when it was featured in the popular manga series Oishinbo.

Buildings in the district suffered damage in the 2004 Niigata Chūetsu Earthquake, but the community rallied together, forming a citizens’ group to revitalize the area. In the process of carrying out its work, the organization rediscovered the historic grounds of the now defunct medicinal drink maker Kina Safuran-shu Honpo. 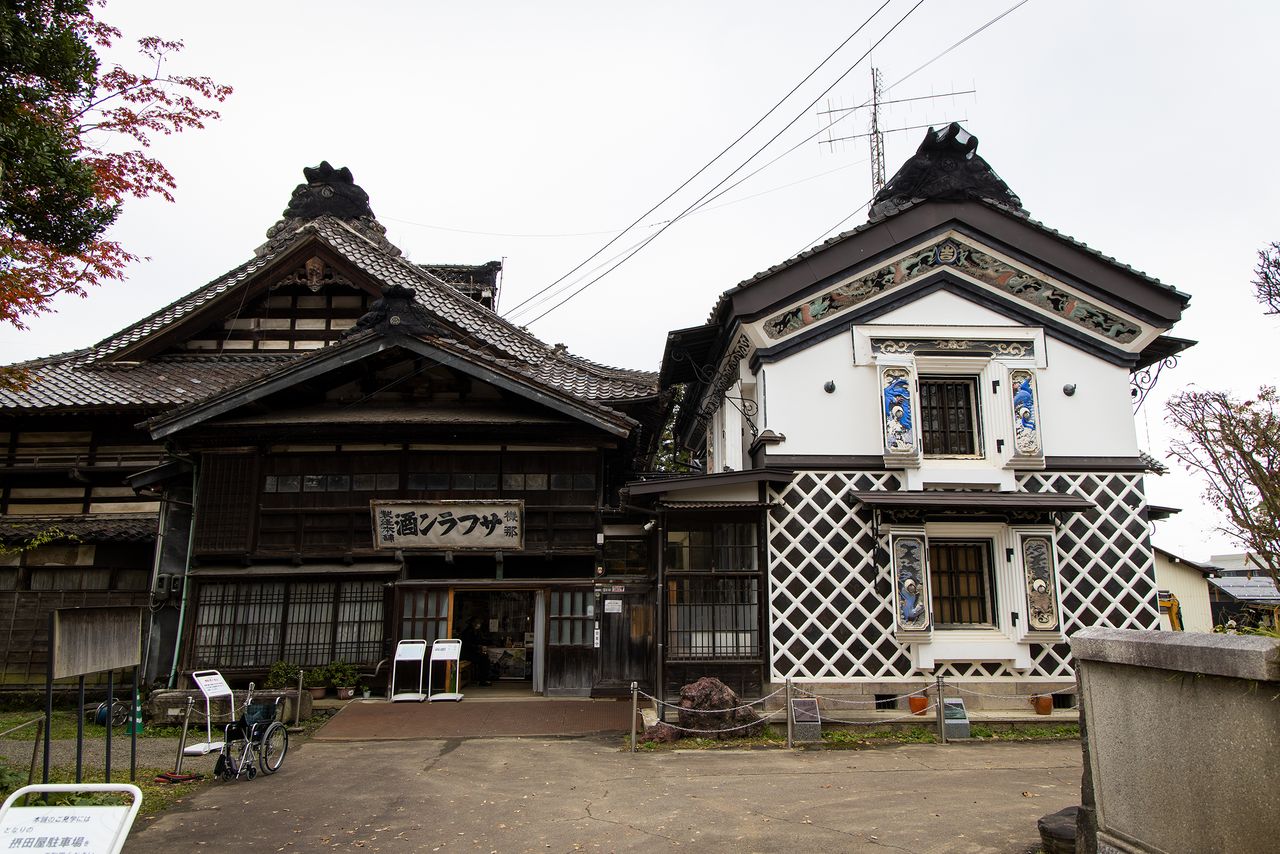 At the left is the main building of Kina Safuran-shu Honpo and at the right is a storehouse featuring raised stucco decorations called kote-e. 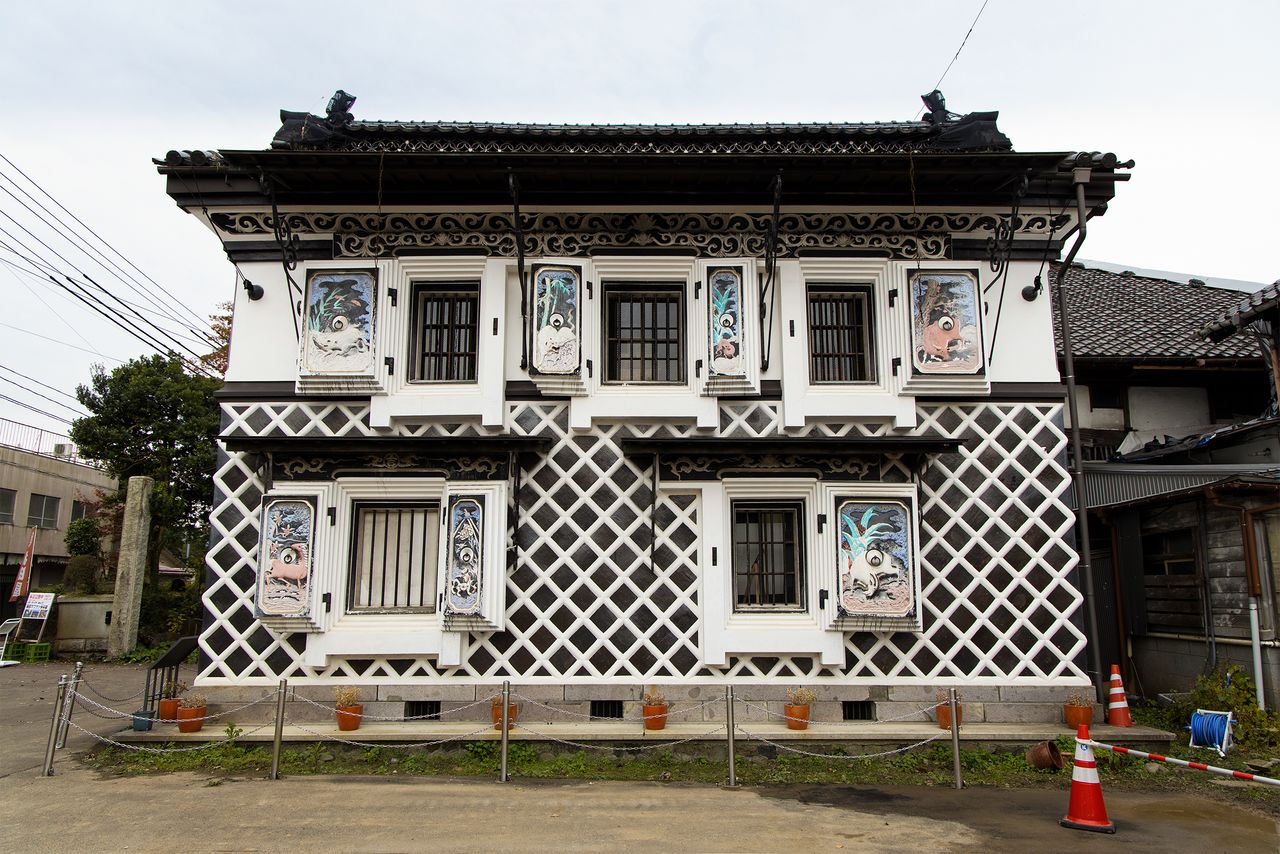 The storehouse’s north façade is decorated with kote-e that depict the 12 zodiacal animals in the Chinese astrological calendar and other motifs.

The founder of the drink maker, Yoshizawa Nitarō, was born in 1863 in a nearby village. While working at an apothecary at the age of 17, he studied traditional Chinese medicine and created a medicinal tonic containing ingredients like cinnamon, cloves, and honey, He launched the product under the name Kina Safuran-shu, and it sold very well.

The name Kina comes from the Japanese word for cinchona , a tree whose bark was used for treating diseases such as malaria. Like kina, saffron (safuran) was also a scarce, expensive import during the Meiji era, and the names of these ingredients were adopted to give the brand added cachet.

Yoshizawa moved his business to Settaya in 1894 and began producing whiskey and wine in addition to his original tonic, earning him a fortune. An avid researcher and a very dynamic figure, he thrived in the free atmosphere of Settaya. He also devoted a great deal of time and energy to architecture and landscaping, erecting several elegant buildings and creating a sumptuous garden on his sprawling property. 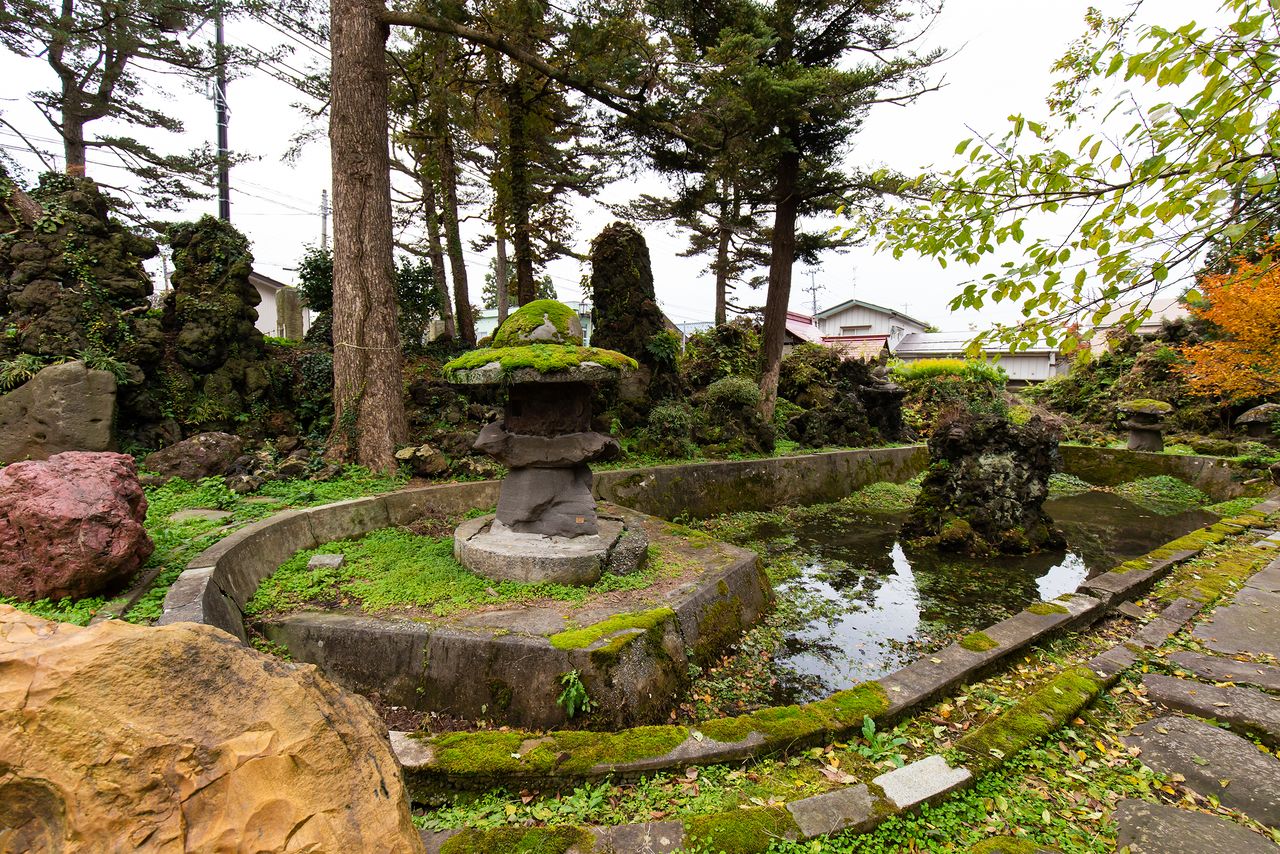 The garden, which is only open to visitors on weekends, showcases Yoshizawa’s distinctive esthetic. Some of the stone statues are said to have been created by Yoshizawa himself. 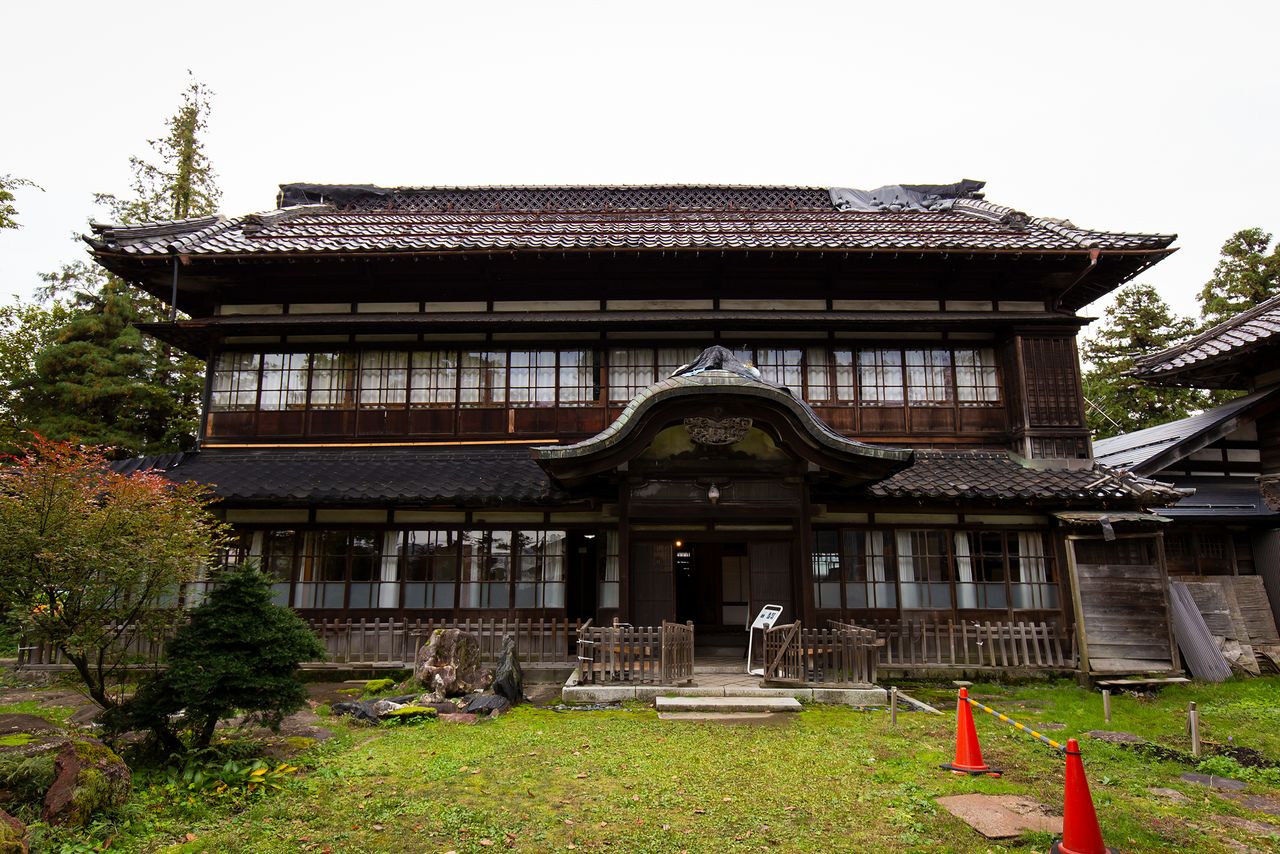 The entrance to the annex facing the garden is topped with a karahafu-style undulating gable. It once bore carp-like shachihoko figures at both ends of the roofline, but these were removed due to concerns about their ability to withstand earthquakes.

Yoshizawa died in 1941 at the age of 78, and following World War II the business went into decline. Eventually, the costs of preserving the grounds, including upkeep on the garden’s buildings and the fine stone walls, grew to be too great and the estate fell into disrepair. Even locals mostly forgot that the property existed.

The garden was heavily damaged in the 2004 earthquake, with many of the kote-e embellishments falling off the storehouse. The cost of restoring the grounds was enormous, beyond what an individual could afford. 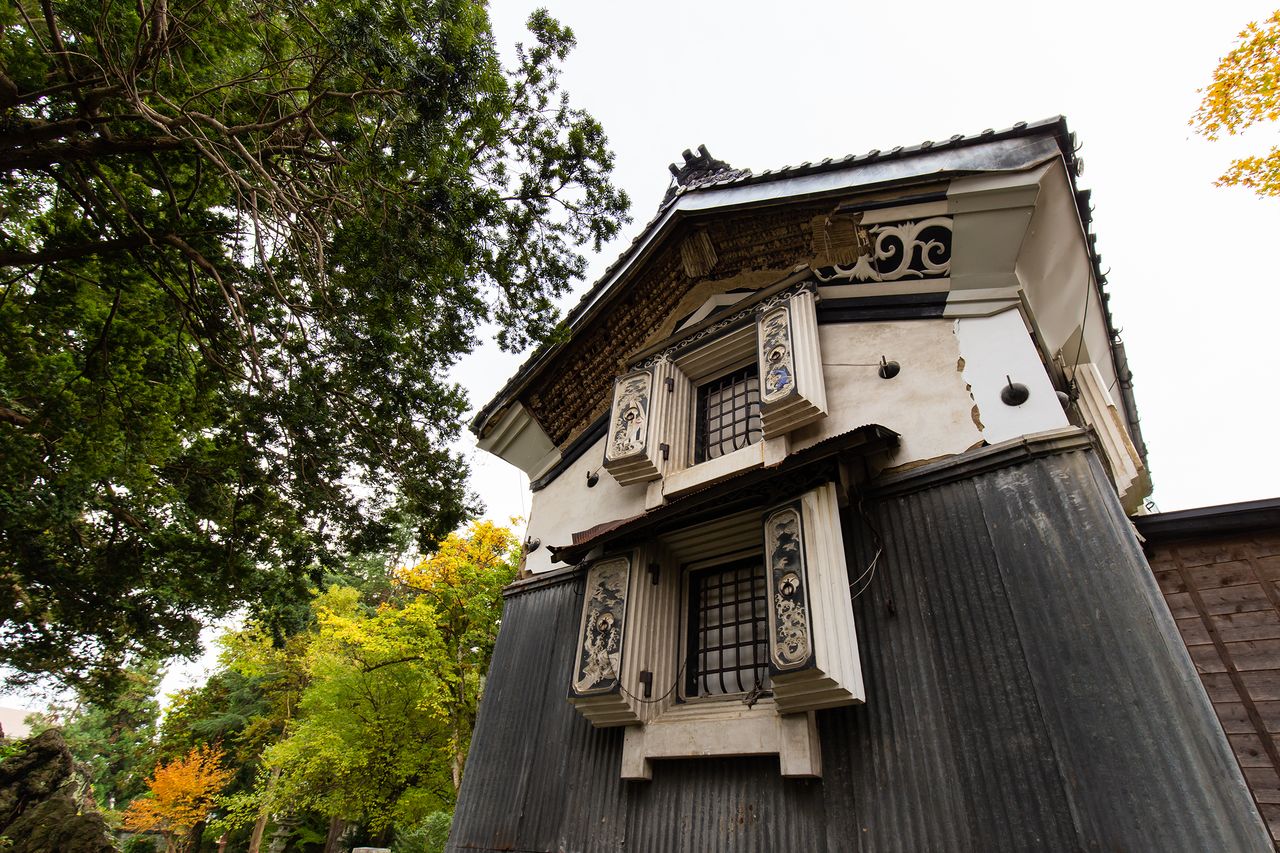 The ishō gura (clothing storehouse) prior to restoration. The quake shook the plaster off some sections of the building.

Surveying the post-earthquake damage and getting a close-up look at the kote-e on the storehouses for the first time, a community group decided that this was an asset worth preserving for future generations and promptly applied to register the buildings as cultural properties. The designation was granted in 2006 and thanks to a government subsidy, restoration work went ahead.

In 2009, local residents and student volunteers began weeding and tidying up the garden, which gradually revealed the structures on the site and the aesthetics of Yoshizawa. The group discovered valuable documents and artifacts inside the buildings and in 2013 officially formed a citizens’ association to preserve the grounds. Restoration work has continued and the garden opened to the public in 2015. Word of mouth about the splendid kote-e on the site spread and soon attracted visitors from all over the country. 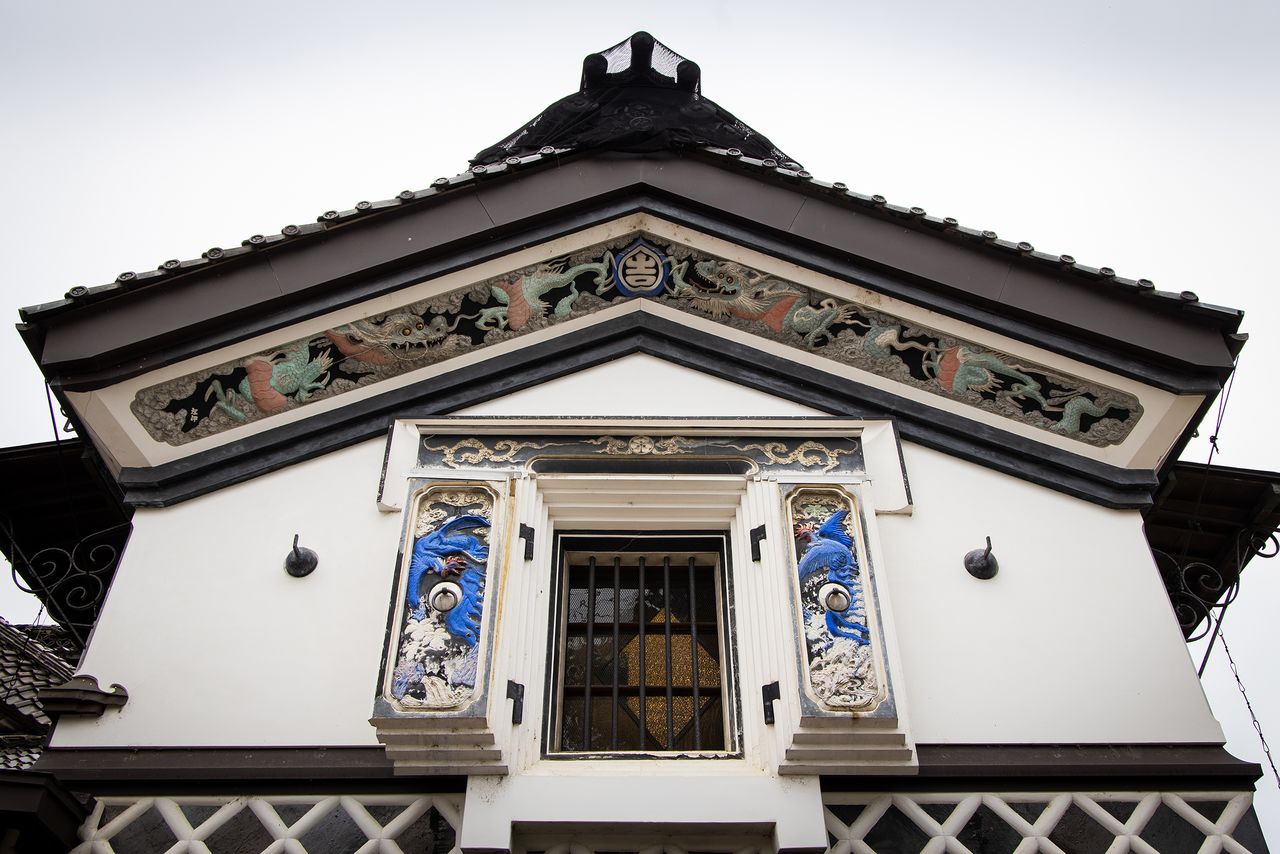 The façade on the east side of the storehouse after restoration shows kote-e depicting animals real and mythical and several types of plants originally done by master plasterer Kawakami Ikichi, a great friend of Yoshizawa who shared his artistic taste. 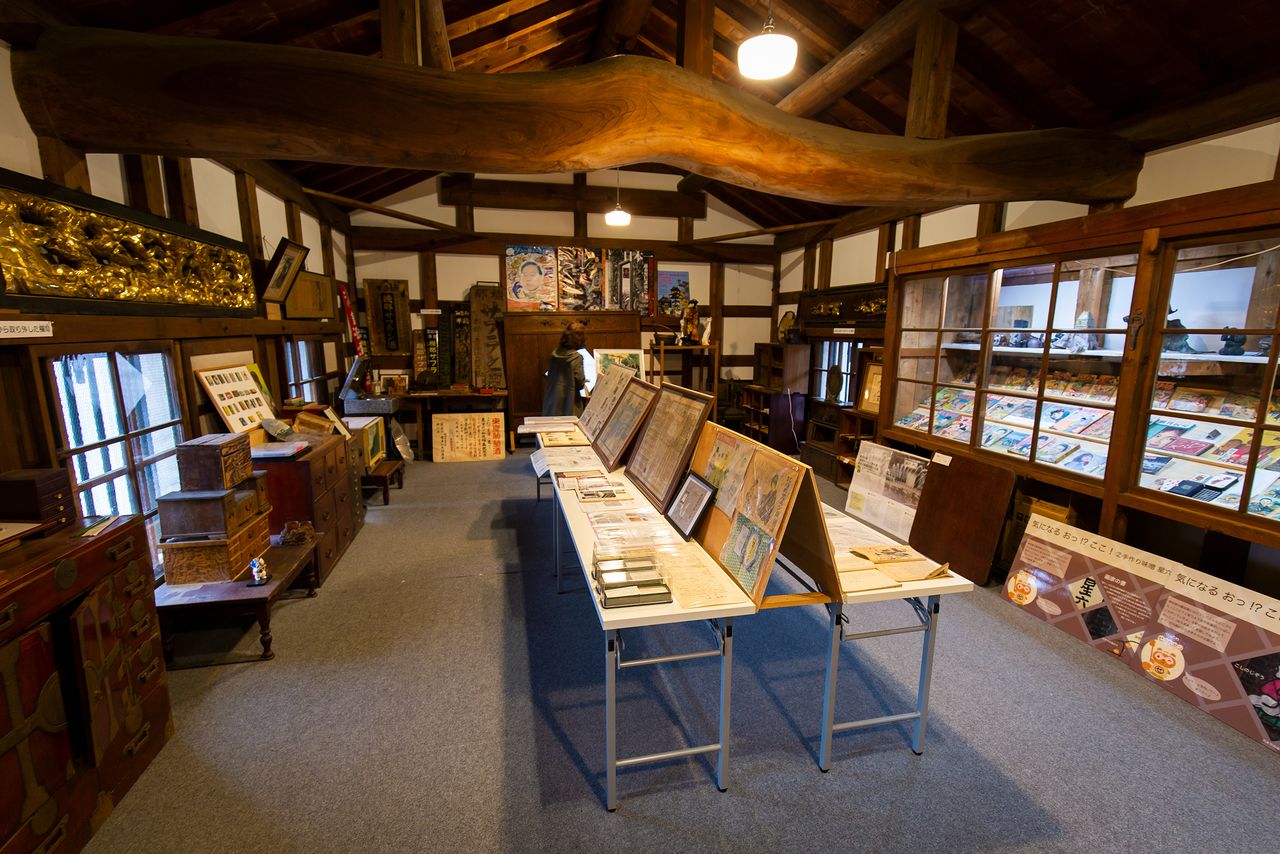 The storehouse has been transformed into an exhibition space displaying old signs, advertisements, and furnishings that had been stored in the building.

Nagaoka acquired the land and buildings belonging to Kina Safuran-shu Honpo in 2017, after which the city initiated a conservation program. In the first phase of the project, a refurbished rice storehouse was opened as a museum in October 2020. The remaining nine structures and the garden are slated to be restored over the next decade. 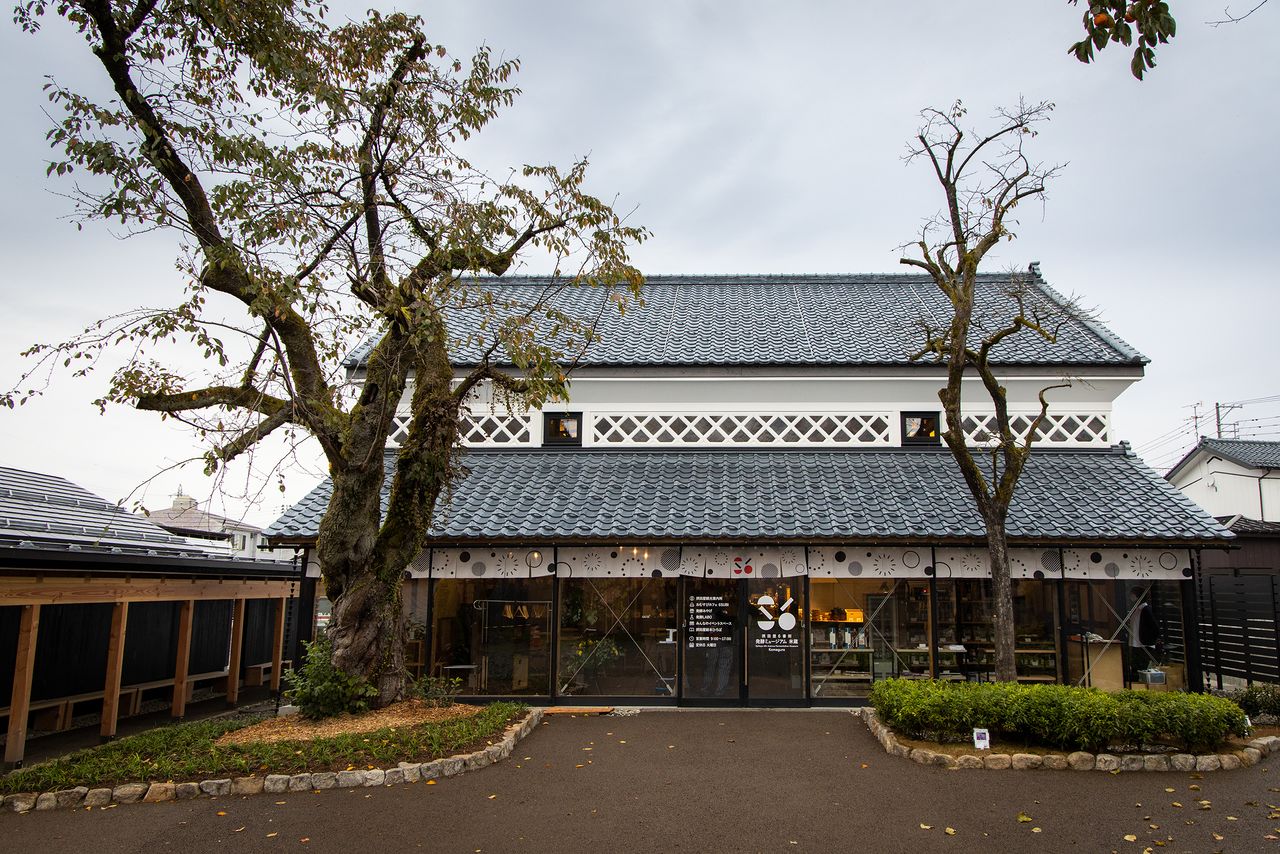 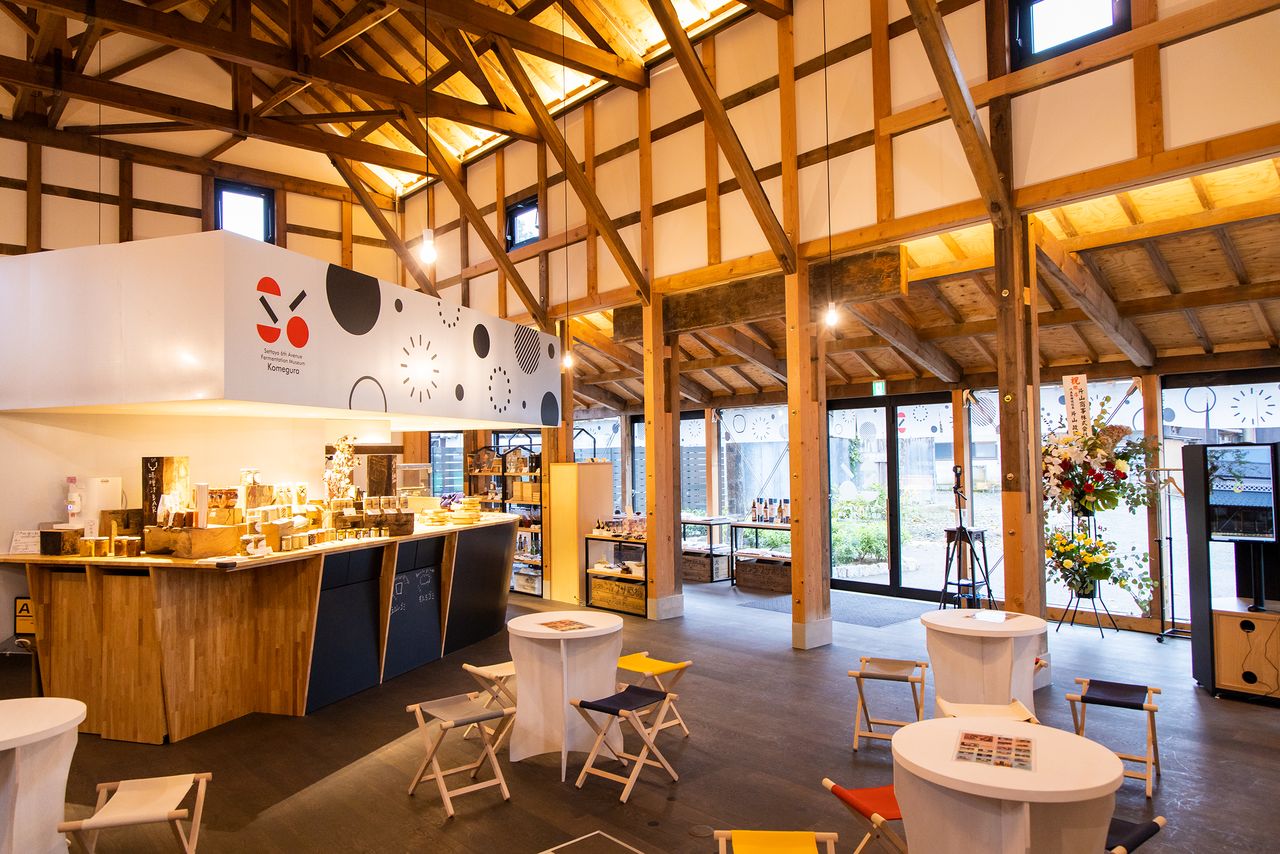 Inside the museum are the Settaya tourism information booth, a laboratory where visitors can learn about fermentation, and a café serving locally-sourced foods.

Nearby is Jōgura, a museum that traces the history of the Yoshinogawa sake brewery, which was founded in 1548. The museum is housed in a large storehouse whose roof is held up by triangular iron trusses. The building was erected in the early 1920s and is designated a cultural property. Exhibits include information on methods for brewing sake, displays of vintage sake-making equipment, and a collection of antique sake bottles. 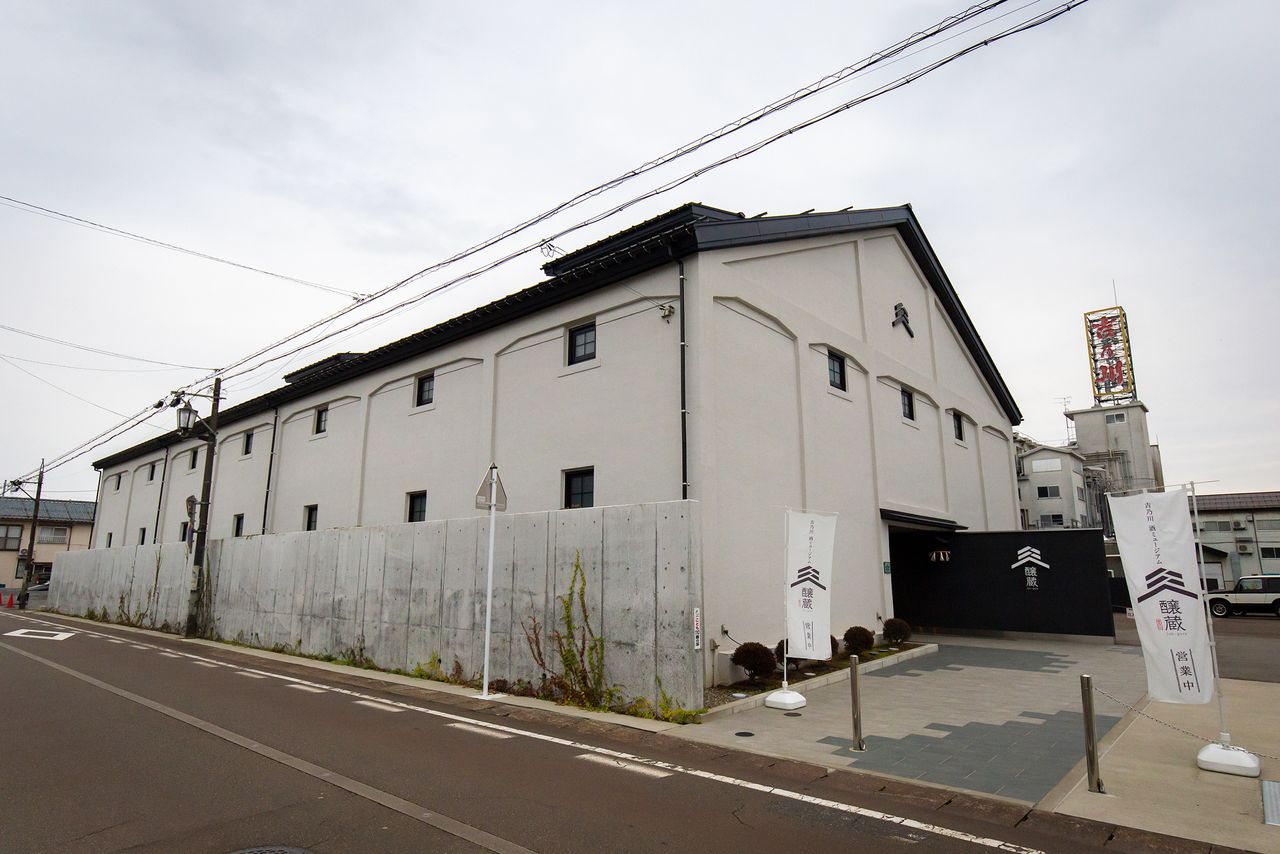 Formerly housing a sake bottling operation, the storehouse, built in 1923, was renovated and opened as an exhibition space in October 2019. 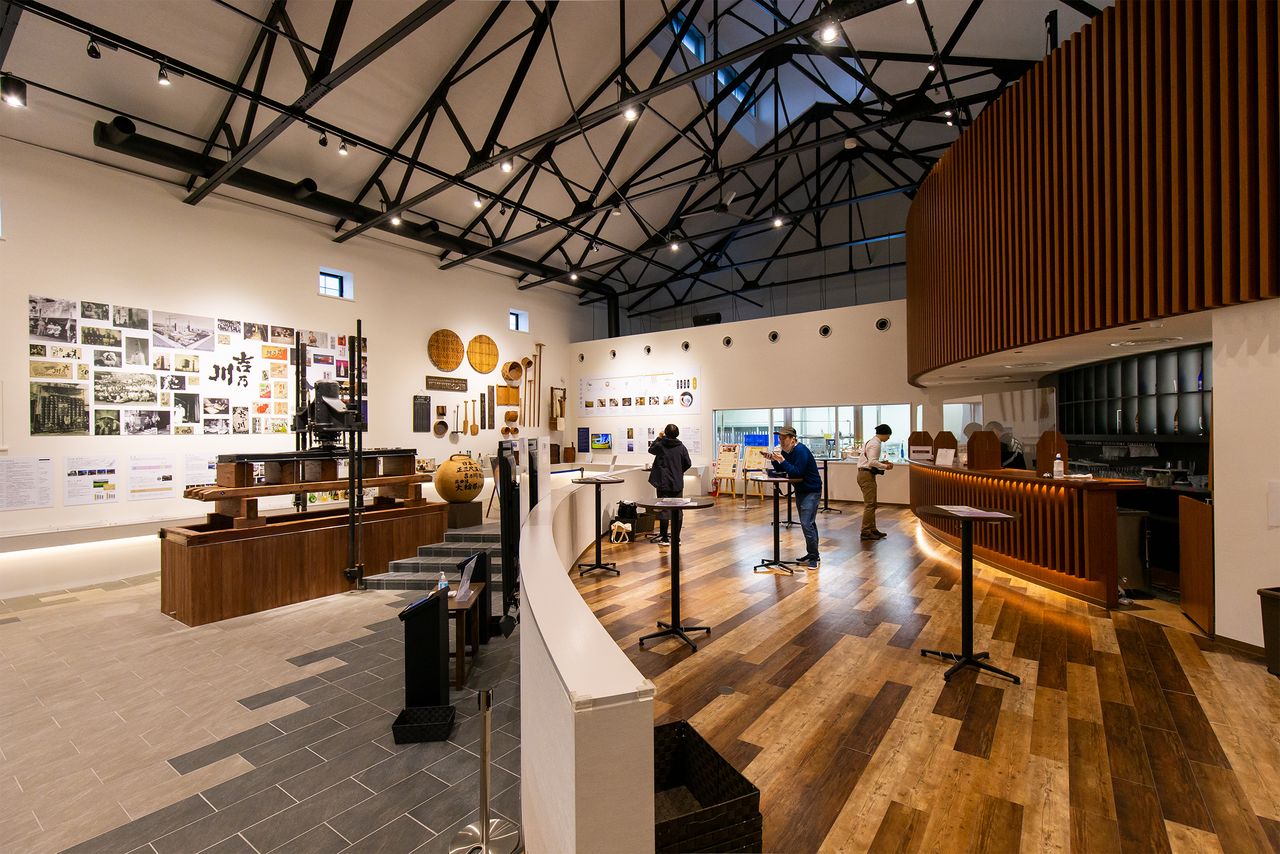 At Jōgura, a sake bar sits next to the exhibition space. The bar serves Yoshinogawa sake ranging from standard products to special varieties. Tastings are available for a fee. 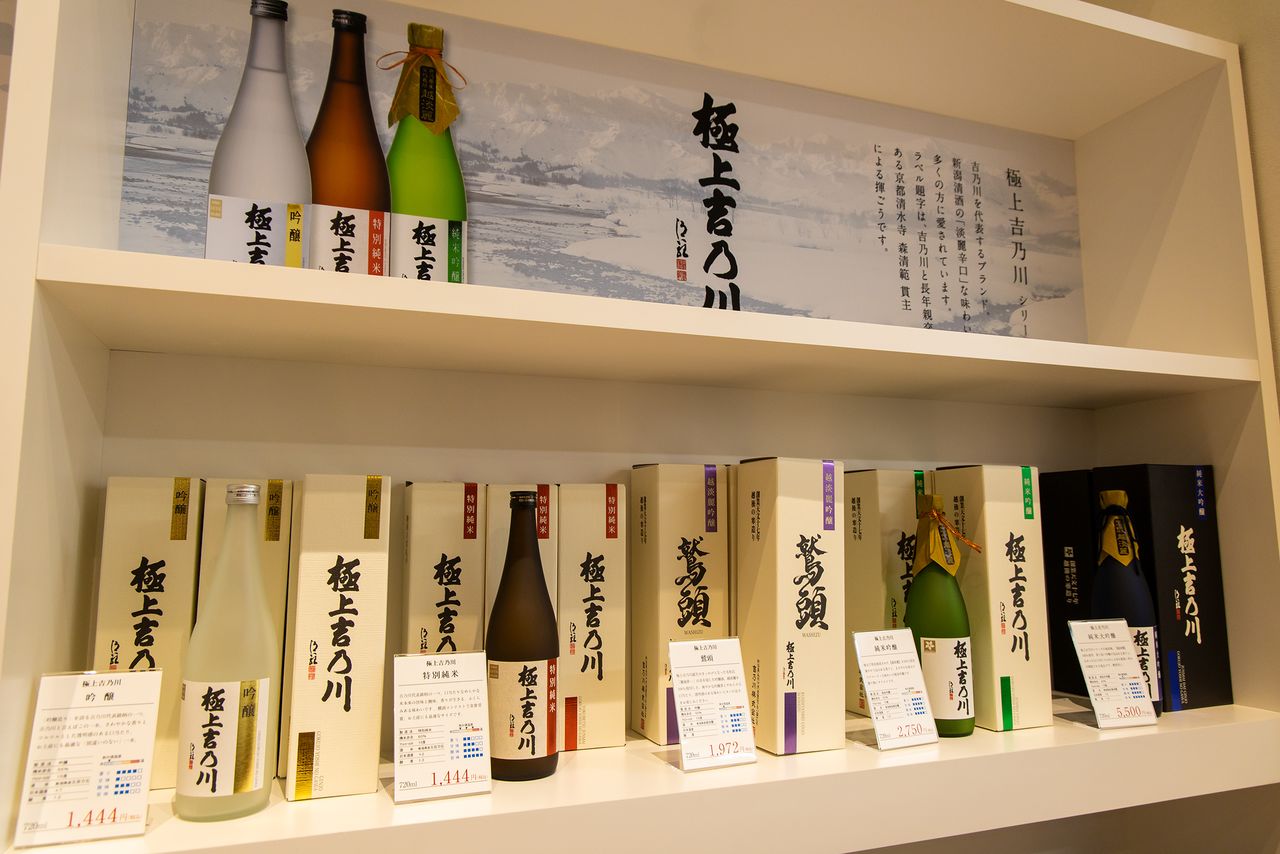 Displays of Gokujō Yoshinogawa, the brewery’s premium product, and other items developed jointly with local businesses.

In addition to his architectural accomplishments, Yoshizawa had a passion for fireworks. Nagaoka has held a fireworks festival since 1879, and the first sanshakudama, a legendary firework about 90 centimeters in diameter, was reputedly launched here. The pyrotechnic displays, which were started to ward off evil spirits, also have the dubious reputation of igniting Kōfukuji, seriously damaging the historic temple in 1903. The temple had served as the Nagaoka clan’s main base during the Boshin Civil War, fought from 1868 to 1869 between forces of the shogunate and those seeking to restore the imperial court. Regardless of whether the fireworks were actually responsible for the blaze, it is a story typically associated with Yoshizawa.

Beautification projects have been carried out in different sections of the district, including along the old Mikuni Kaidō. Settaya Park, a convenient spot for taking a break while exploring, is known for its unusual public restrooms. 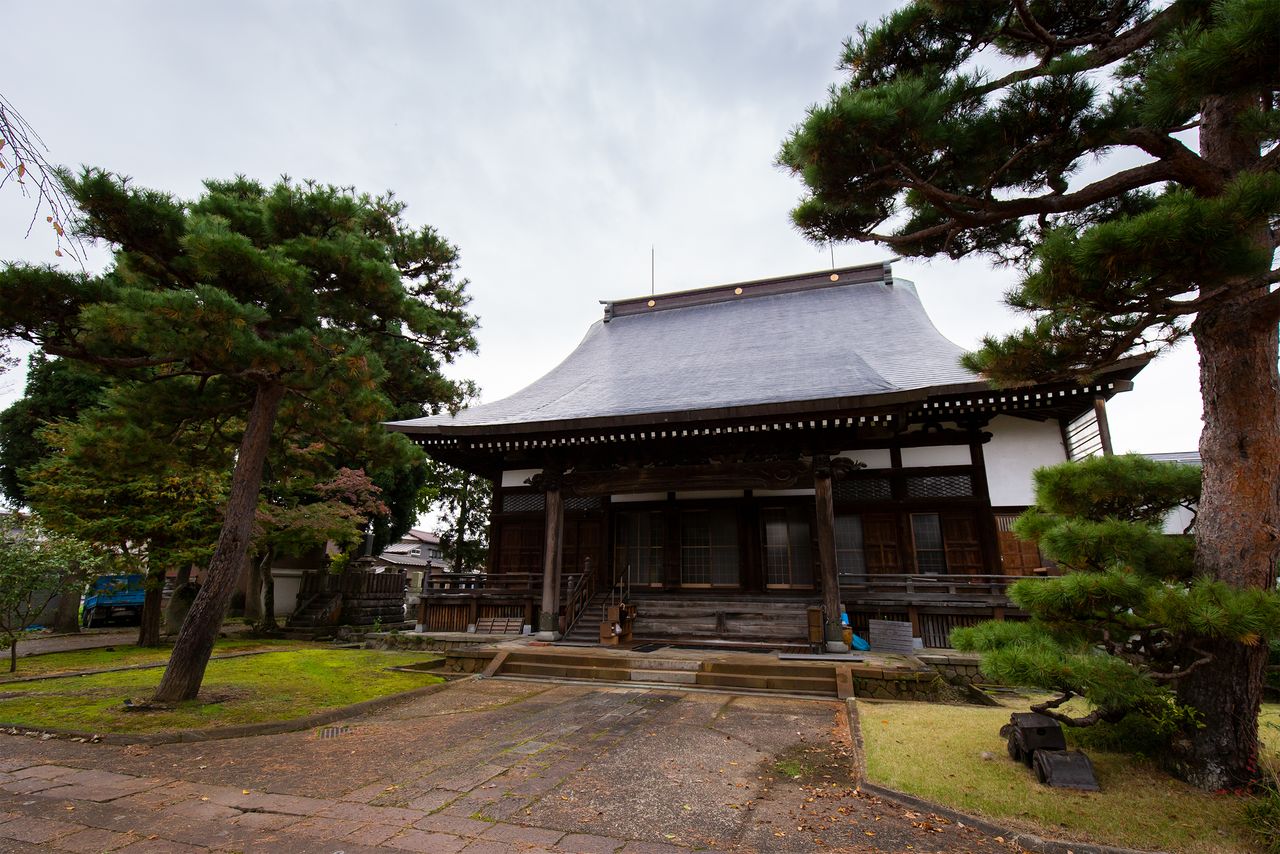 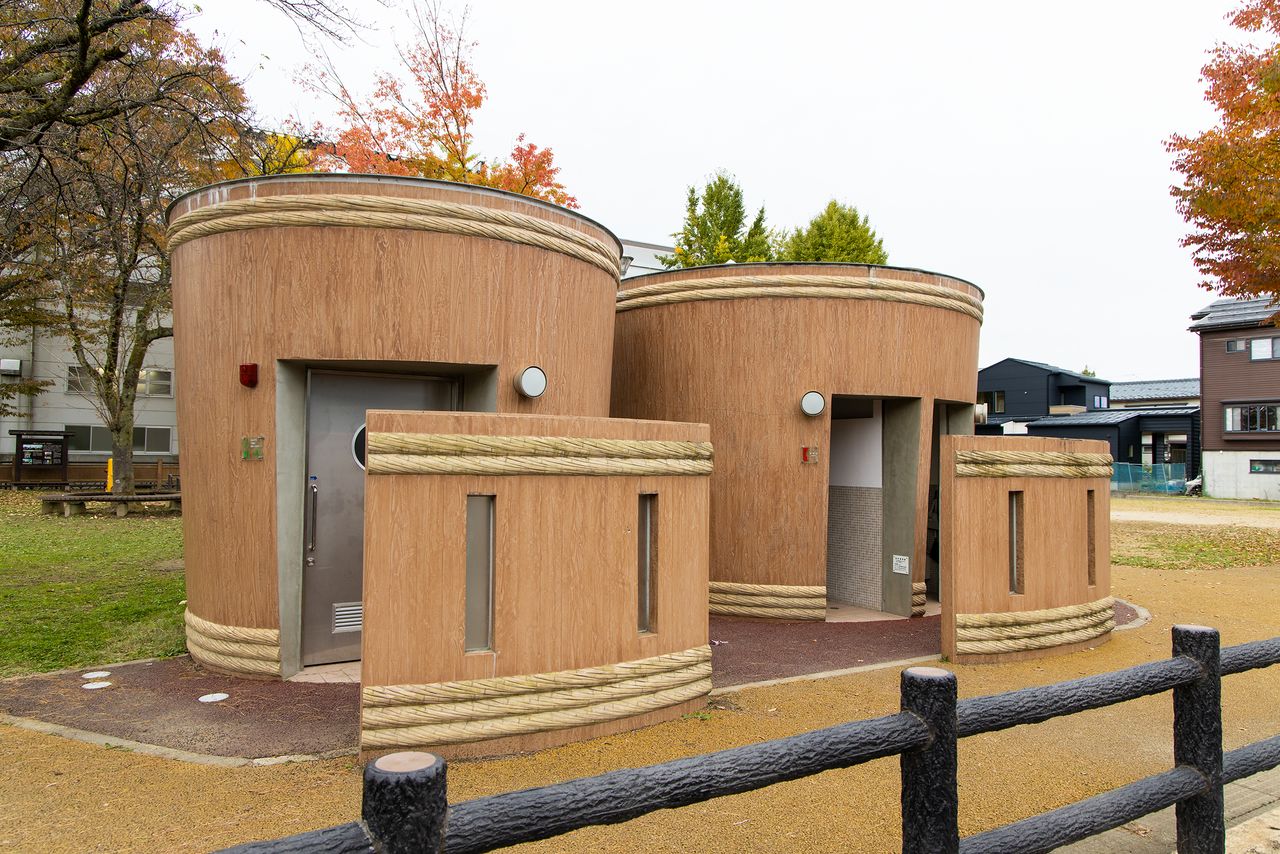 The public restrooms in Settaya Park are constructed to look like wooden barrels used to ferment products like sake and miso.

(Translated from Japanese. Reporting, text, and photos by Nippon.com.)