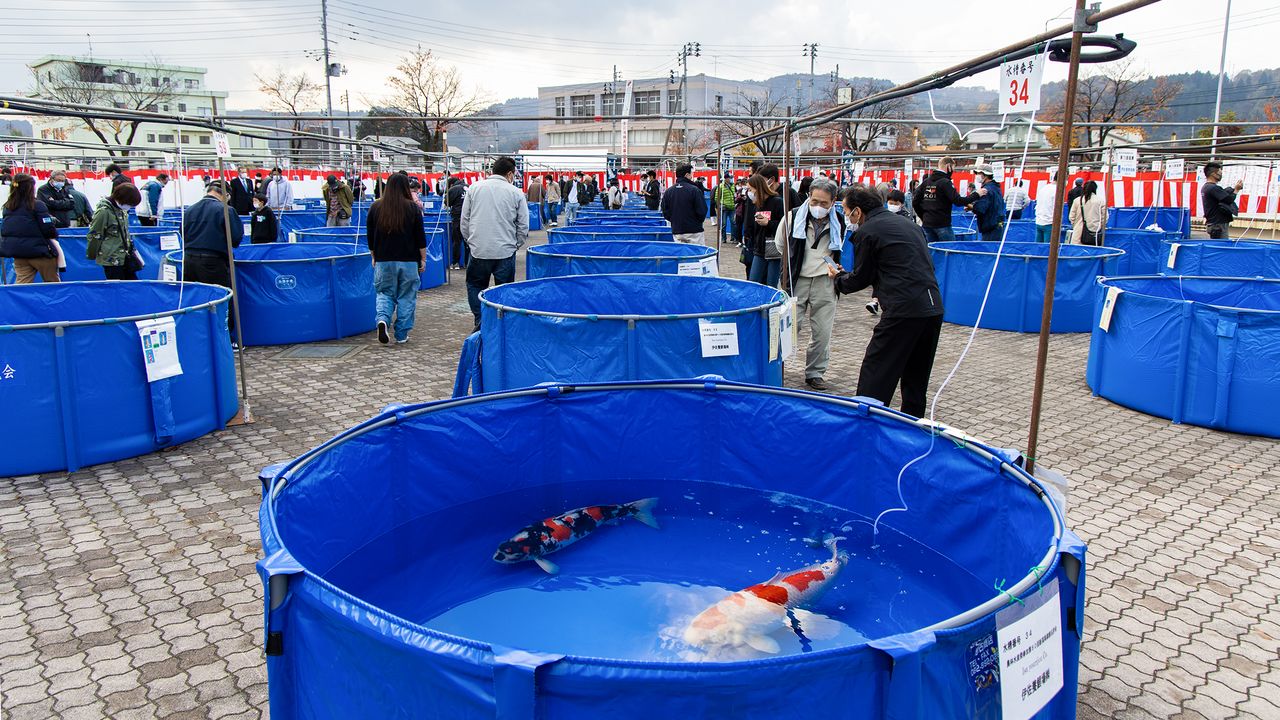 Culture Travel Apr 23, 2021
Brightly colored nishikigoi are often referred to as “living art.” Once farmed in the mountain valleys of Niigata’s Chūetsu region as a source of food, the colorful carp are now one of the world’s most sought-after ornamental fish.

At Niigata’s annual Koi Show, held in November, visitors mill about, gazing at the various colorful carp swimming in large, blue viewing tanks. The term ornamental fish typically brings to mind exotic species displayed by hobbyists in specialized aquariums. However, nishikigoi, a vibrantly patterned species also known as a brocaded carp, are best viewed not in fish tanks, but swimming gracefully in large ponds, such as those in Japanese gardens. At the show, though, the fish are displayed in plastic tanks so that potential buyers can easily asses from above the all-important color, markings, and form of specimens that determine the value of a nishikigoi.

In prewar Japan, a residence boasting a garden pond filled with nishikigoi was a symbol of wealth. Nowadays, with large swaths of the Japanese population living in small homes and apartments in cities, nishikigoi have become a rarity. This is not to say, however, that demand for the ornamental carp has fallen. Exports of the fish, a favorite of wealthy foreigners, are booming and producers of nishikigoi have seen revenues skyrocket. 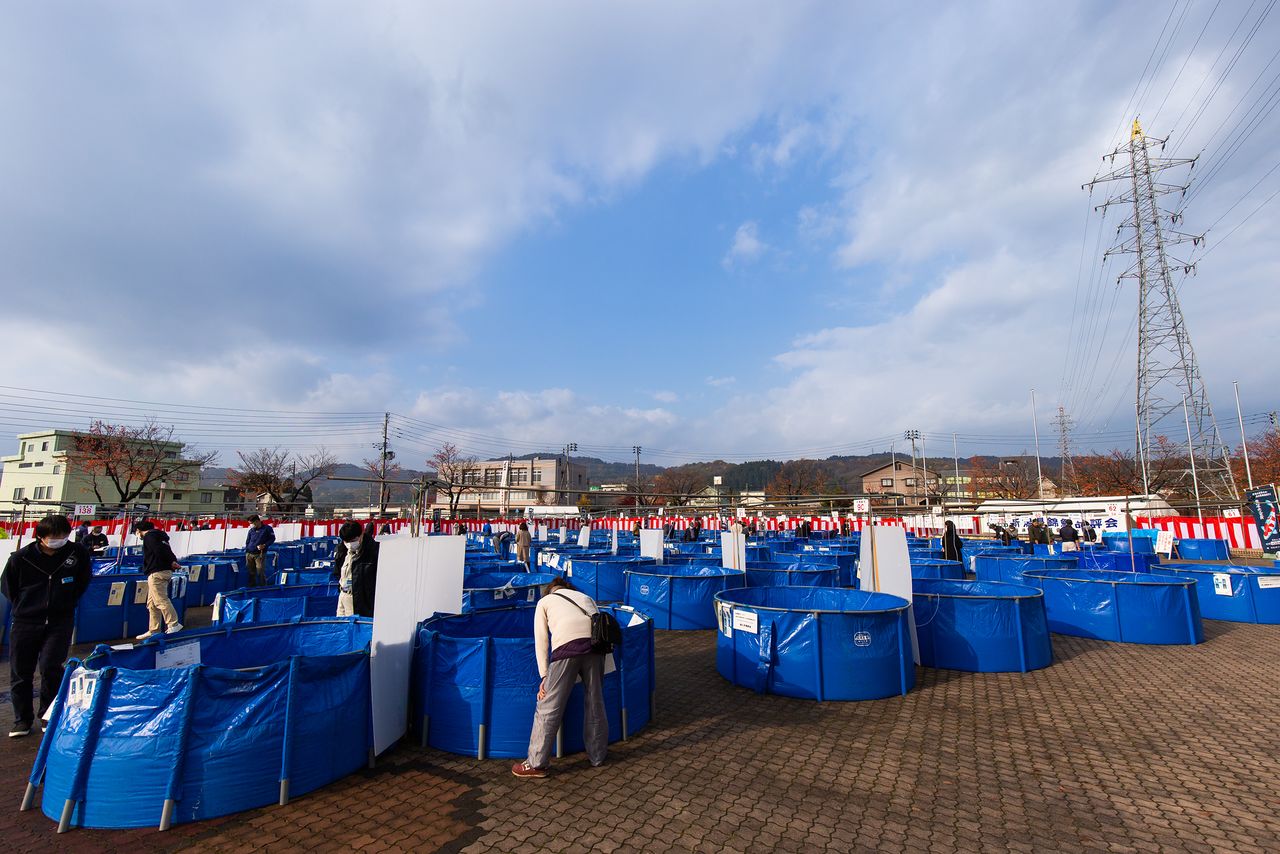 The Sixtieth Niigata Koi Show was held in the grounds of Ojiya municipal gymnasium on November 7 and 8, 2020.

The global love affair with nishikigoi is a relatively recent development. According to trade statistics published by the Ministry of Finance, up until around 2000, Japan exported some ¥1 billion worth of ornamental fish a year, excluding goldfish. By 2019, the amount had increased to ¥4.7 billion. Nishikigoi have grown so popular in Asia and elsewhere that in English the Japanese word for carp, koi, is used exclusively to refer to the decorative variety.

Niigata, the birthplace of the nishikigoi, currently has over 300 breeders, more than any other prefecture. The Niigata Koi Show, the world’s largest such event, marked its sixtieth anniversary in 2020. Over 80 breeders attended and some 750 fish were exhibited. It is not unusual for award-winning fish to be sold for tens of millions of yen, and many members of the public visit the event just to catch a glimpse of such expensive specimens. However, the COVID-19 pandemic prevented many overseas buyers and enthusiasts–over 1,000 in a typical year–from visiting the show. 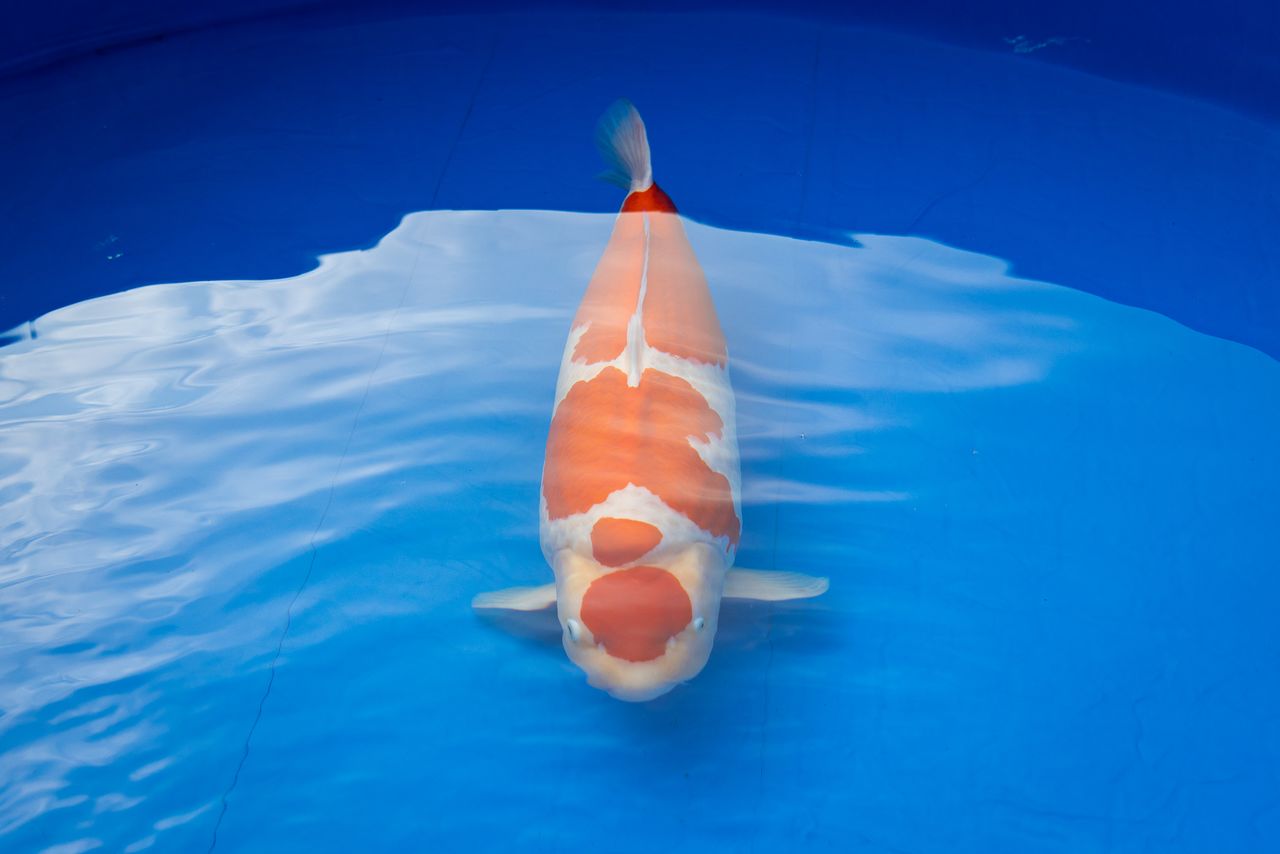 A kōhaku variety of nishikigoi measuring over 80 centimeters in length won the Minister of Agriculture, Forestry, and Fisheries Prize. 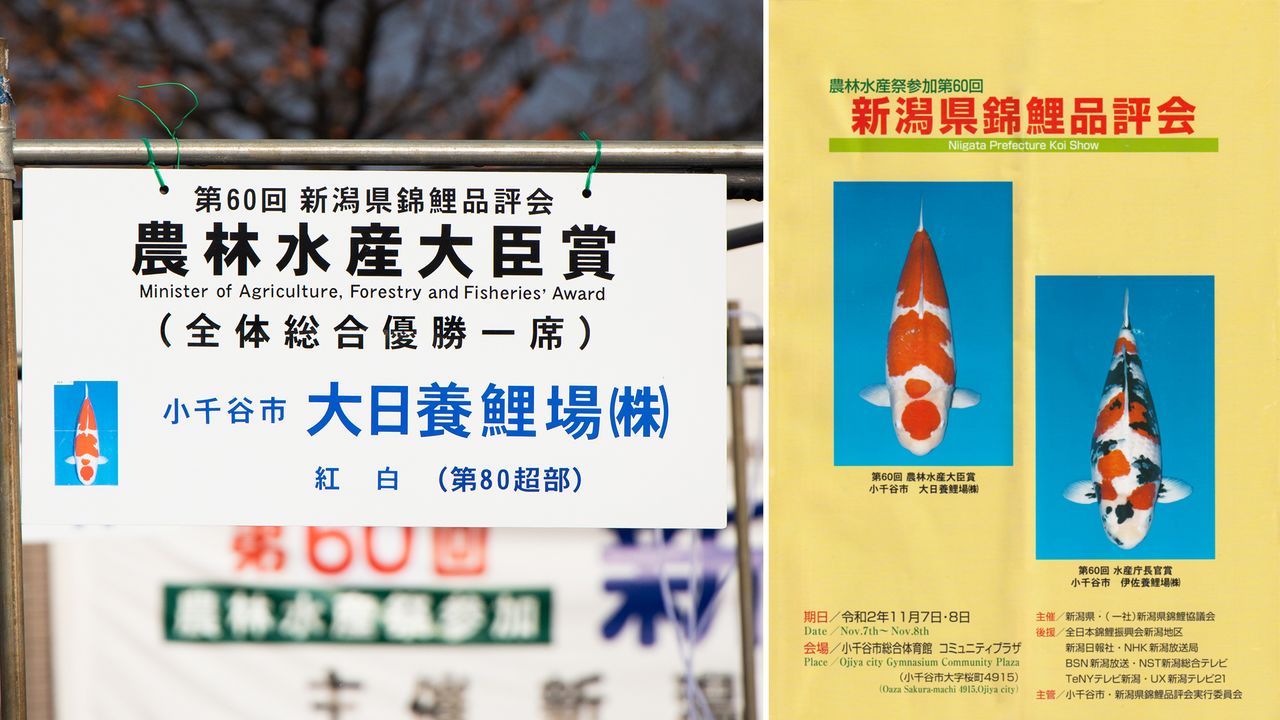 Pamphlets features photographs of the carp taken from above.

From Winter Food to National Treasure

Nishikigoi were first produced in the late Edo period (1603–1868) in Nijūmuragō, a district in Niigata’s Chūetsu region that now spans the municipalities of Nagaoka, Ojiya, and Uonuma. The fish were originally farmed for food. The area is known for its heavy winter snowfalls, and in those days communities would be cutoff from vital supply routes for months at a time, making nishikigoi a prized source of protein. Farmers kept fish in irrigation reservoirs in the warmer months, then in winter moved the carp to ponds attached to farmhouses, covering these with lids or erecting stout poles to prevent the snow from accumulating and suffocating the fish. Some farmers even kept carp in ponds dug under the floorboards of their homes.

Over time, repeated inbreeding yielded new varieties, including the completely red higoi. Later, a type called the asagi that had developed partially white markings due to the local clay soil and soft water arrived from a neighboring area. It is believed that these two varieties were then crossed to produce the kōhaku, a white-skinned fish with large red markings. 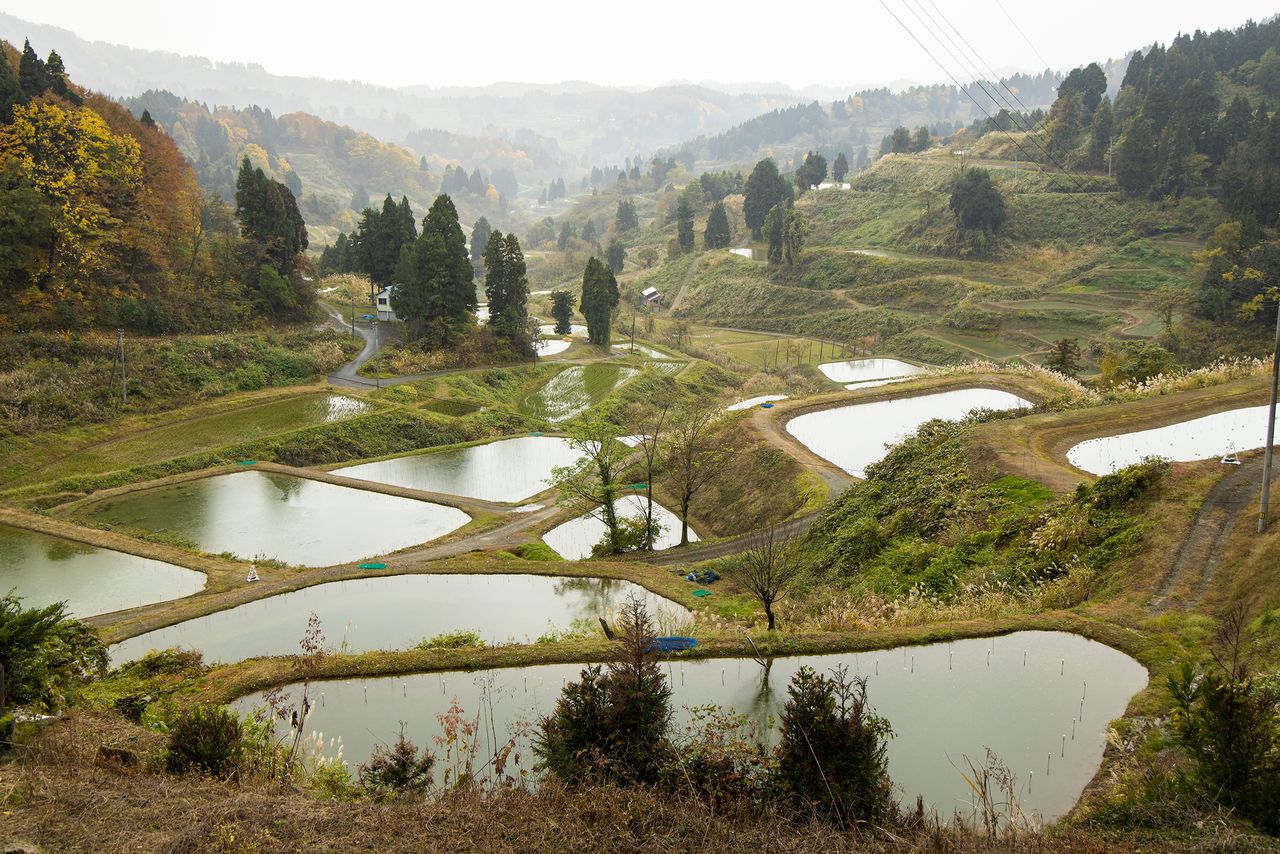 The district of Yamakoshi in Nagaoka is referred to as the home of the nishikigoi. What at first glance appear to be paddy fields are actually pools for carp farming. 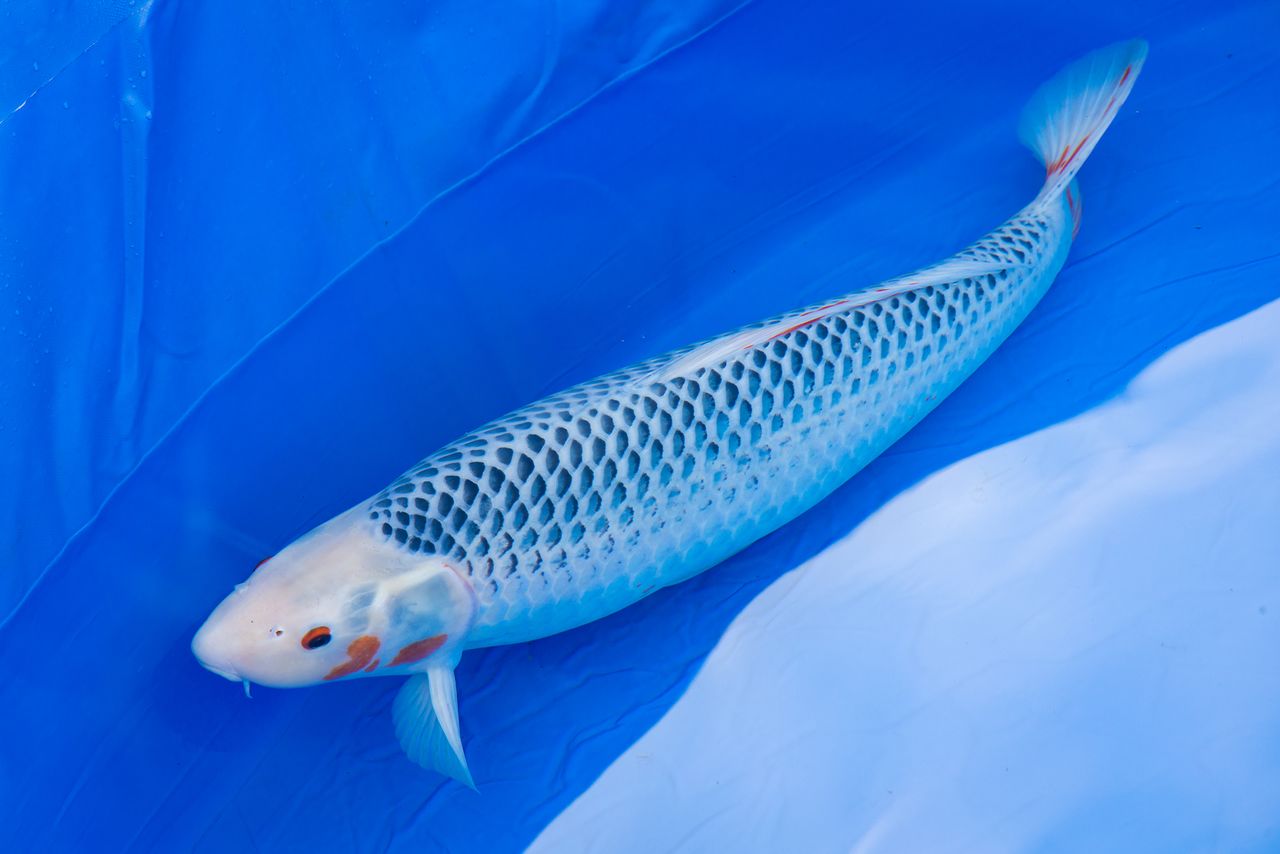 Bred by Maruhiro Koi Farm, this asagi won the chairman’s prize in the 80-centimeter division at the Niigata Koi Show.

In the isolated mountain communities, it is easy to imagine how villagers, taking great pride in the unusual nishikigoi varieties in their ponds, might meet with neighbors and discuss crossbreeding fish in the hope of producing offspring with specific colors or patterns. This preoccupation with carp eventually culminated in today’s shows where breeders are able to exhibit the fruits of their labor.

Isa Mitsunori, manager of the Isa Koi Farm and head of the Niigata chapter of the All Japan Nishikigoi Promotion Association, suspects that the advent of the kōhaku, followed by the Taishō sanshoku, with its ink-like black spots, and the Shōwa sanshoku, whose markings extend to its mouth, resulted in these varieties being treated as the “big three” nishikigoi varieties. Then, when German carp, which were larger and had fewer scales, were imported for food around the turn of the twentieth century, it had the effect of greatly boosting the number of nishikigoi varieties available, of which there are currently 82.

Nishikigoi debuted on the national stage at the Tokyo Taishō Exhibition, an industrial expo held in Ueno Park in 1914, where the fish was billed as kawarigoi, or “unusual carp,” from Echigo. At the time, the species also went by various other names such as irogoi, hanagoi, and moyōgoi, all references to its color and patterns, but by the 1940s, nishikigoi had stuck. 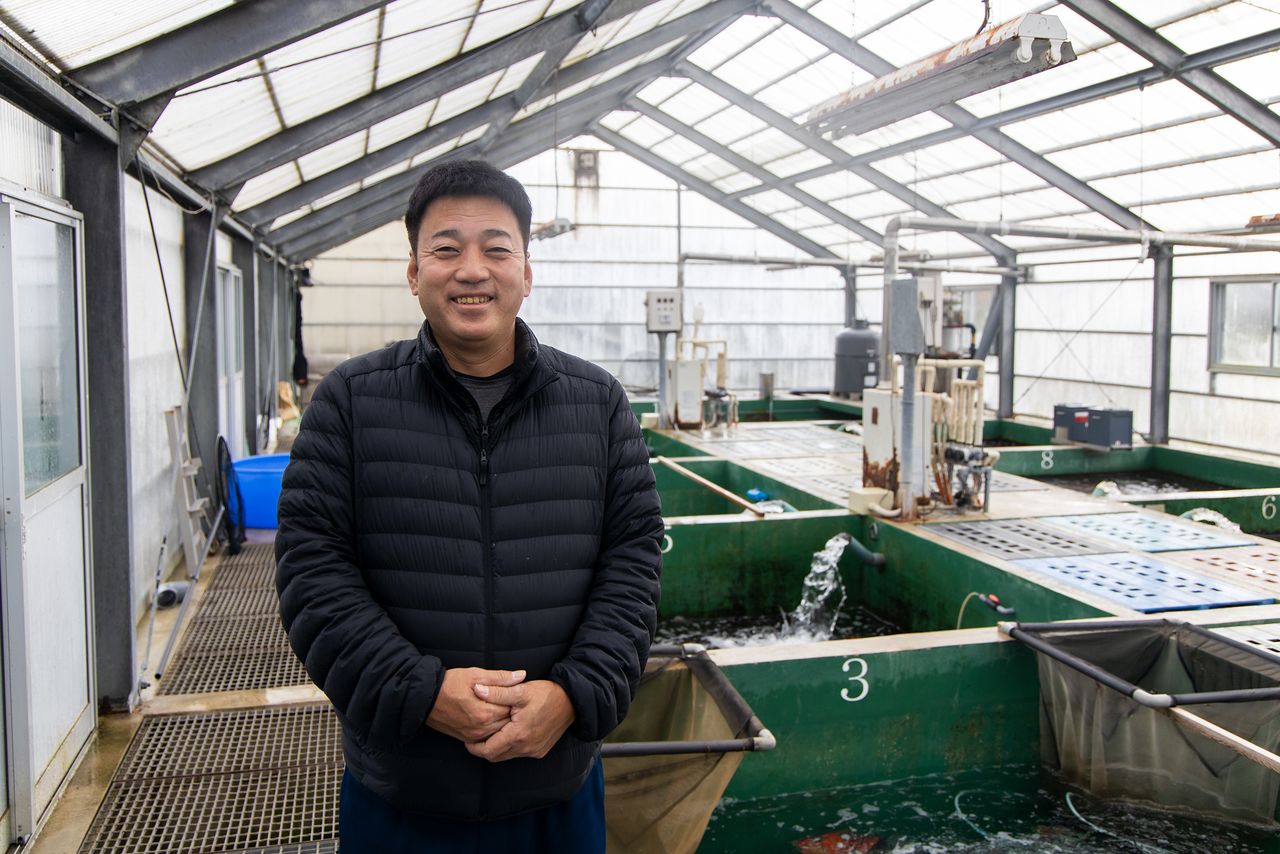 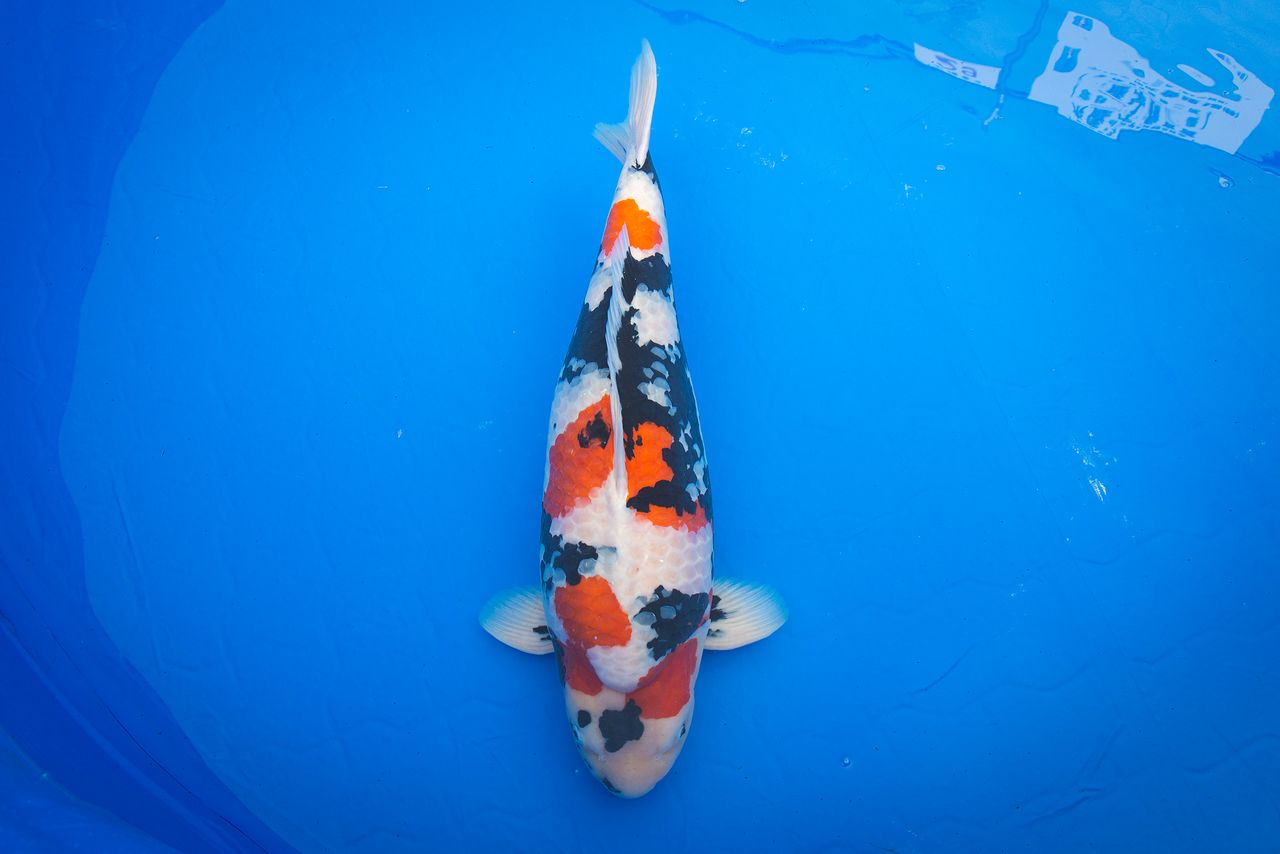 This Shōwa sanshoku bred by the Isa Koi Farm won the Fisheries Agency directors prize at the Niigata Koi Show.

Niigata began promoting the export of nishikigoi in the early postwar period. In the 1960s, thanks to the advent of specialized plastic bags for transporting live fish by air, nishikigoi began gracing the gardens of Hawaii’s Japanese-American residents, a factor that contributed to the steady increase in enthusiasts in the West.

In the 2004, the powerful Niigata Chūetsu Earthquake severely impacted the carp breeding industry. The temblor damaged buildings and cracked ponds, causing them to leak. In addition, landslides blocked waterways and power cuts caused oxygen pumps to stop working, resulting in the deaths of large numbers of carp. 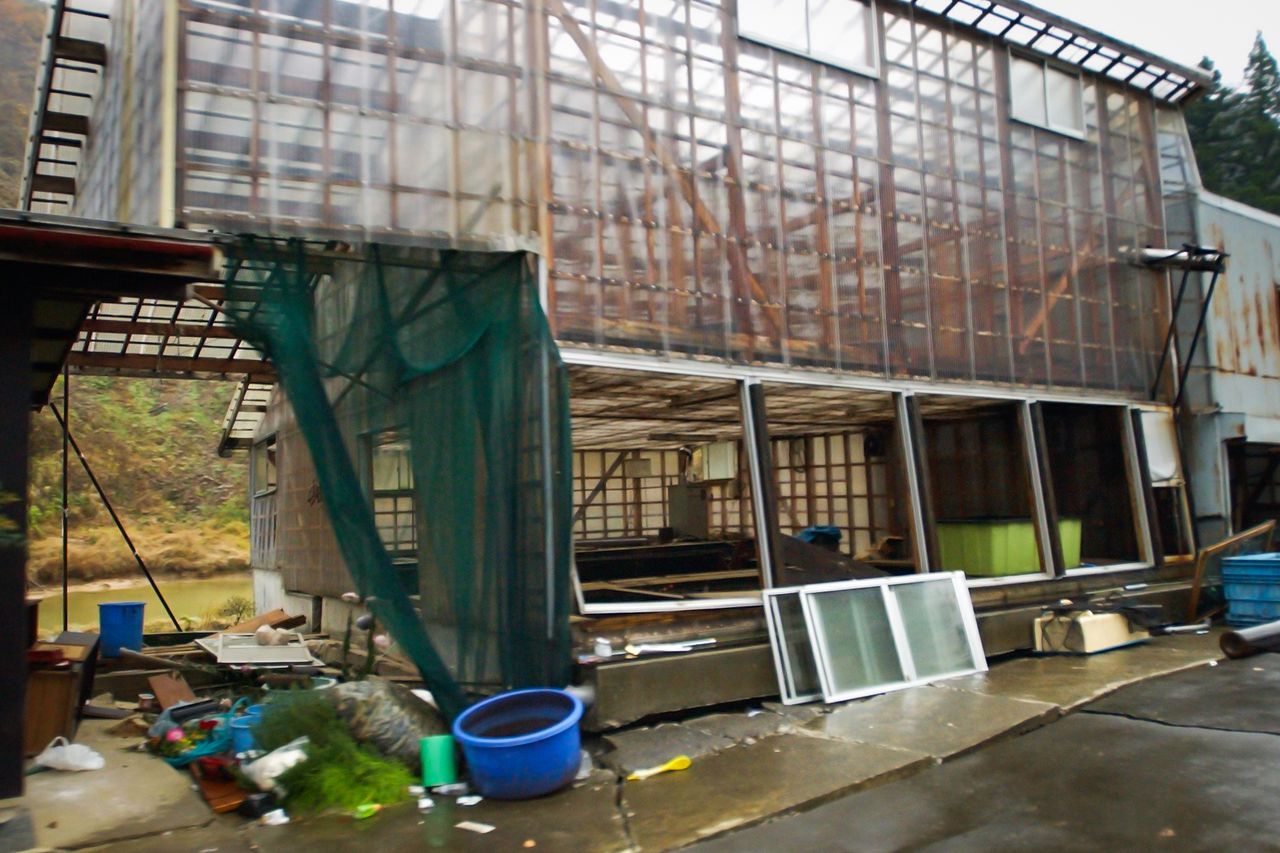 A month after the earthquake, a nishikigoi farm in Yamakoshi stands abandoned. (© Jiji)

The disaster inadvertently spurred the industry’s transition to the export trade. When breeders began rebuilding, words of encouragement along with financial support came pouring in from overseas enthusiasts. At the time, domestic demand had plateaued, but fish were enjoying increased popularity in China and other Asian countries. The industry worked with the government to focus more on exports as a way out of the crisis, concentrating on branding.

In 2017, Niigata declared the nishikigoi as the official fish of the prefecture. Currently, some 80% of specimens produced nationally are exported, of which around 60% are bred in Niigata. 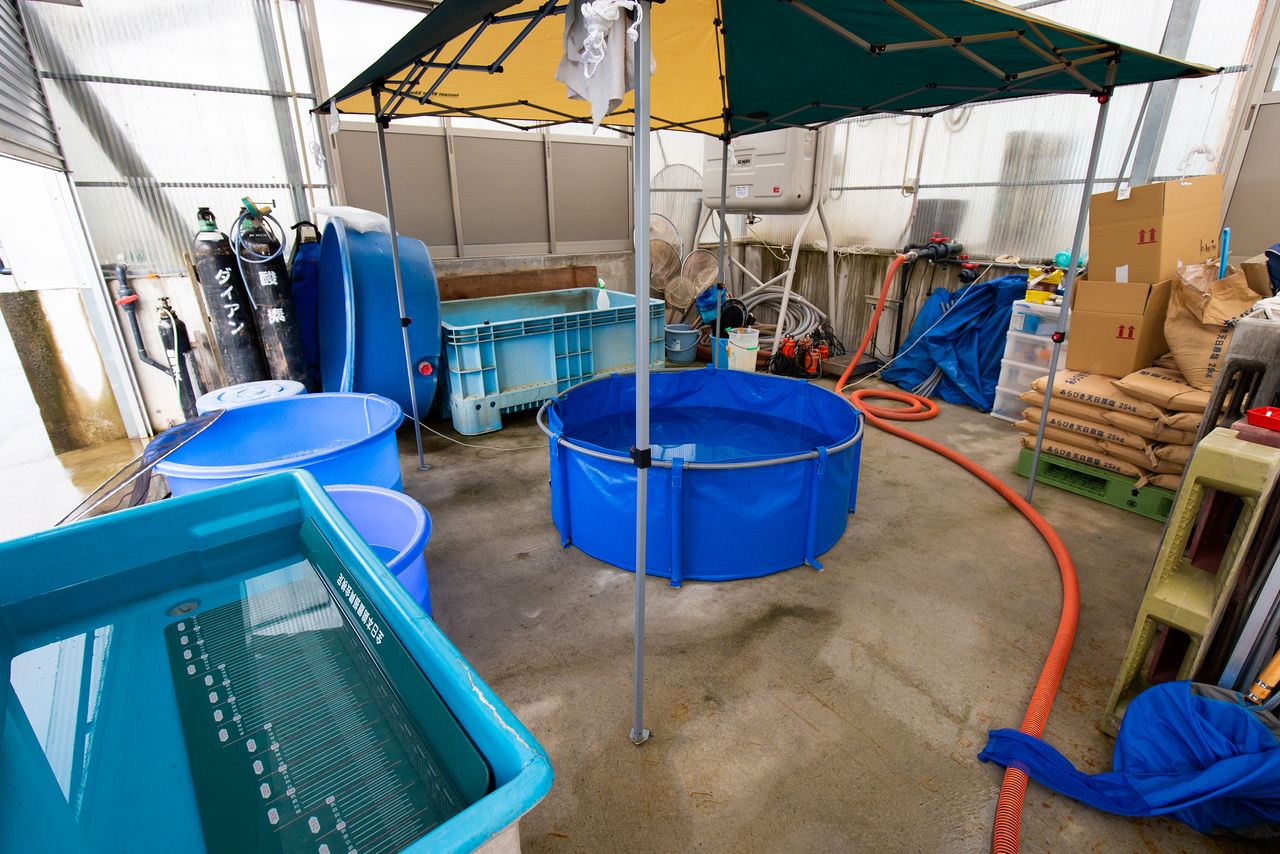 An area for taking photos has been set up beside an aquaculture tank at Isa Koi Farm. The COVID-19 pandemic has encouraged the farm to focus more on online sales to overseas customers.

Isa says that while many overseas buyers are initially attracted to gold- or silver-colored fish, most enthusiasts grow out of such flashy varieties and end up favoring the “big three.” 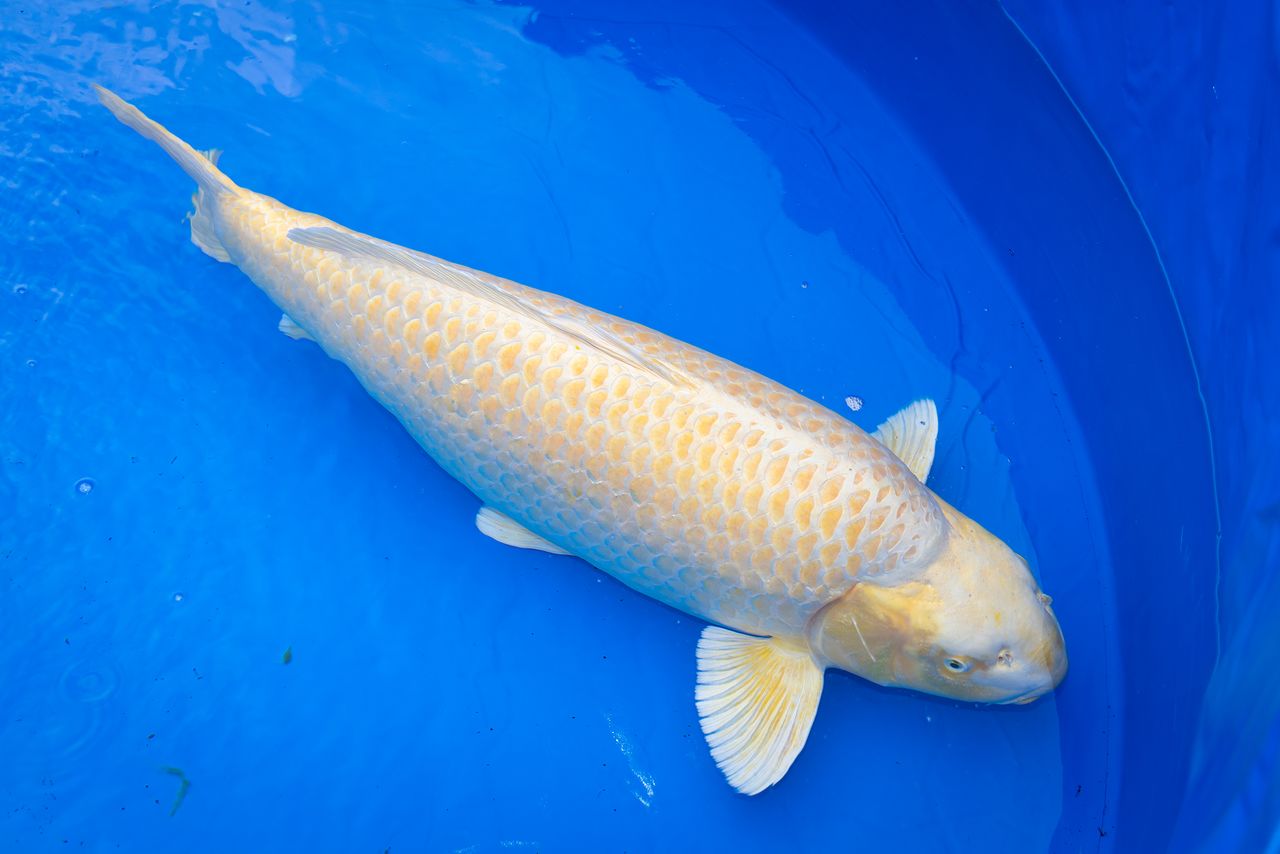 A yamabukiōgon variety raised by Izumiya Koi Farm won the over 80-centimeter division at the Niigata Koi Show.

Gold and silver nishikigoi tend to have regular markings. By contrast, the markings of the “big three” varieties are considerably more diverse and even change as the fish grow. Part of the enjoyment of collecting is buying a fish based on a prediction of how it will look in the future—will the markings become more vivid or grow in size?—and then watching how the specimen develops.

Today, overseas buyers and enthusiasts are well versed in the characteristics of the respective nishikigoi farms and will mention the traits of the different varieties they produce. In response to whether he can tell if a fish is one of his own, Isa says that he once visited Cambodia’s Angkor Wat on business and recognized a Shōwa sanshoku swimming in a pond near the entrance. “I could tell immediately it was one of mine,” he declares. “It made me proud to come to a World Heritage site and see a nishikigoi I had raised. It really brought home how lucky I am to do this kind of international work.” 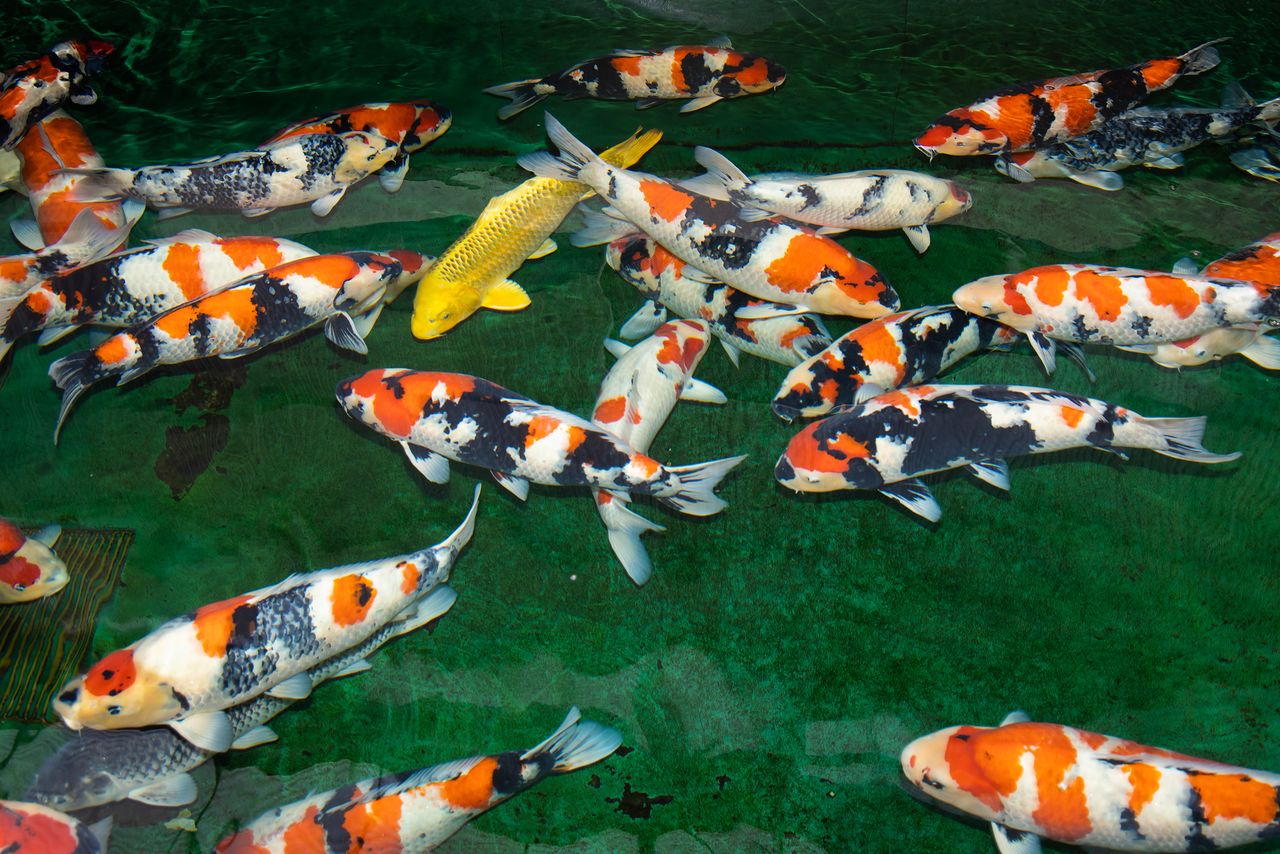 Isa Koi Farm chiefly breeds the three main nishikigoi varieties and is particularly well known for its prize-winning Shōwa sanshoku, which are referred to as Isa Shōwa.