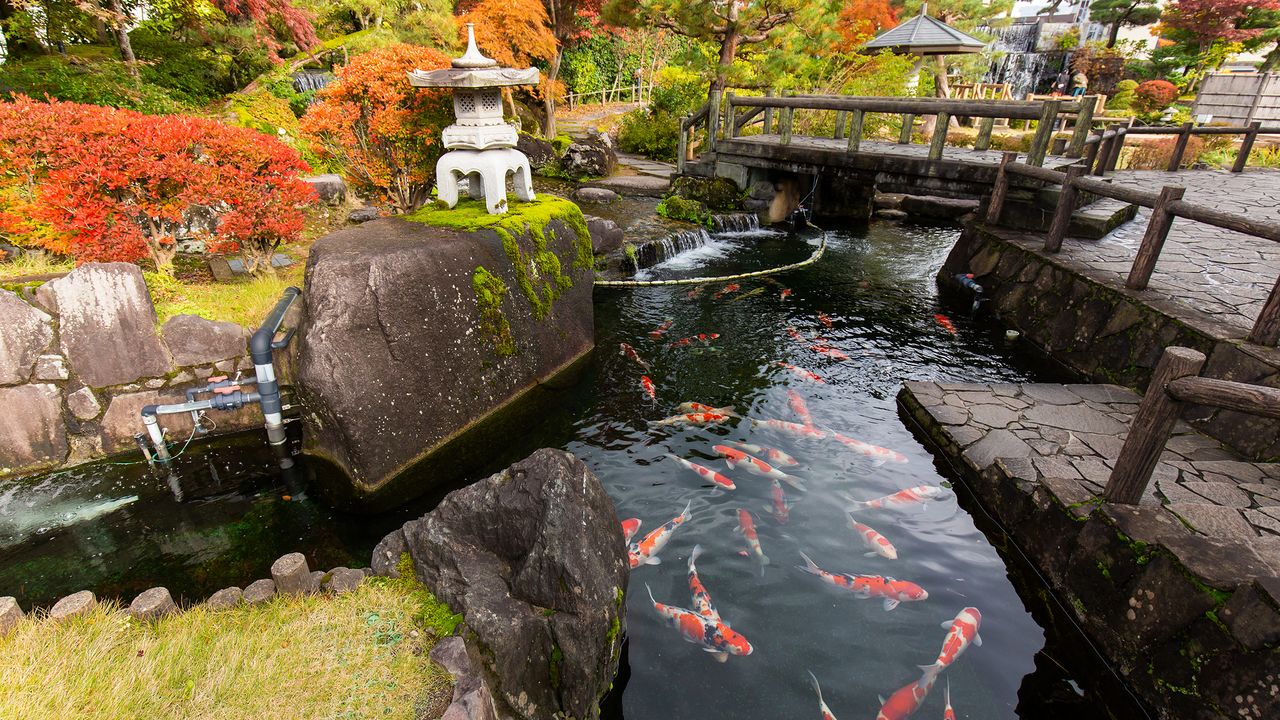 Culture Travel Apr 30, 2021
While the number of overseas nishikigoi enthusiasts is growing rapidly, there are concerns that demand for, and recognition of, this unique fish within Japan is declining. There are calls for the nishikigoi to be made Japan’s national fish to rekindle interest in the species.

While Prime Minister, Tanaka Kakuei played an important role in promoting the nishikigoi, both in Japan and around the world. It is a well-known fact that the pond at Tanaka’s Mejiro estate in Tokyo contained 200 of the fish, which were first developed in the mountains of his native Niigata Prefecture. Tanaka similarly stocked a pond that was created during his time in office in the grounds of Akasaka Palace, Japan’s state guest house. He also gifted the colorful carp to visiting foreign dignitaries and aristocrats to emphasize the nishikigoi’s status as Japan’s national fish. These efforts contributed to the strength of nishikigoi exports today. 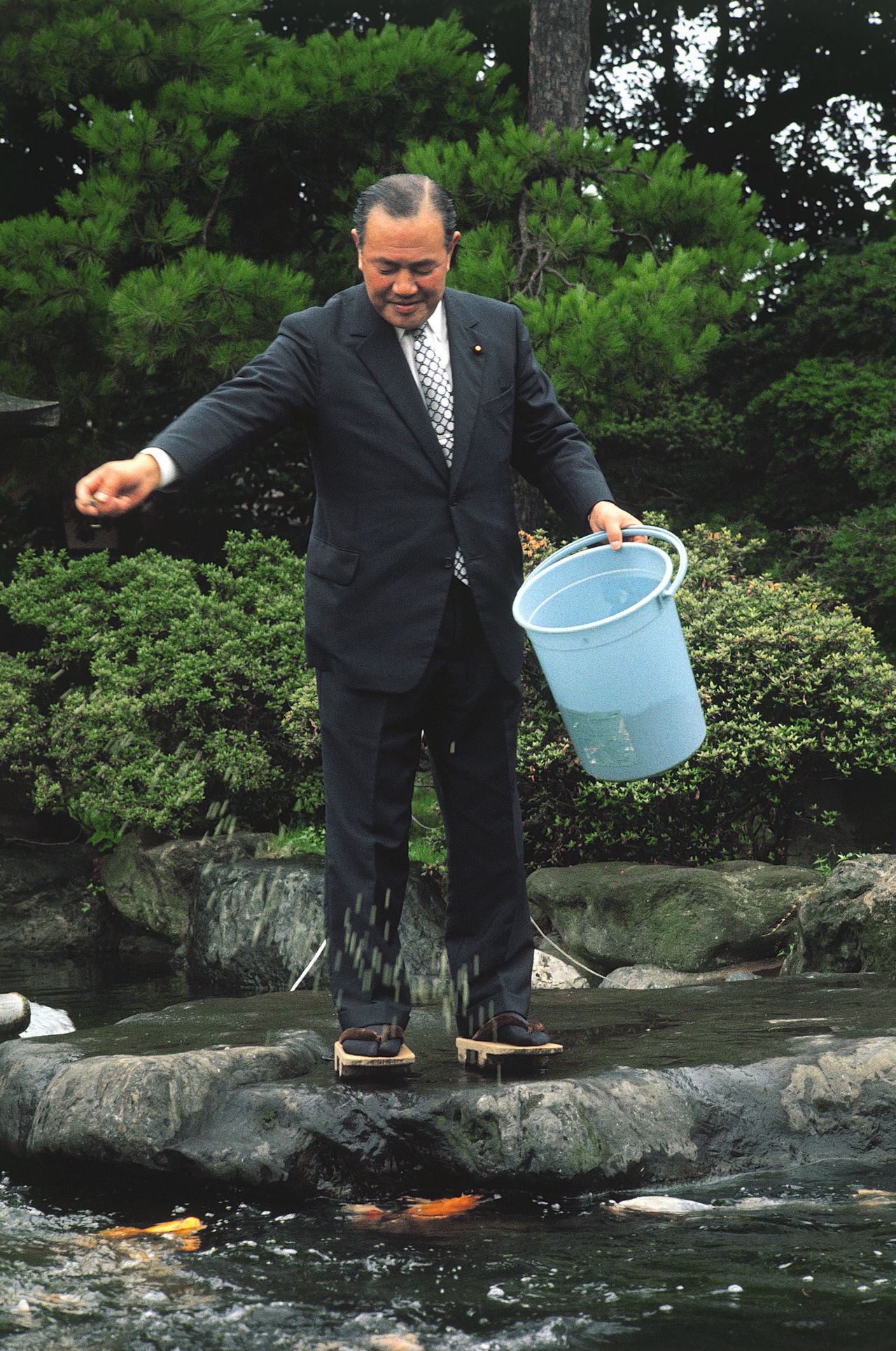 Tanaka Kakuei feeding nishikigoi at his home following his election as head of the Liberal Democratic Party in July 1972. (© Jiji)

An Industry with a Future

Two days after Niigata’s annual Koi Show in November 2020, the largest such event in the world, I visited another show organized by former employees of the award-winning Dainichi Koi Farm who have gone on to set up their own aquaculture businesses. Targeted at industry insiders, the small gathering had only a few foreign attendees from Europe and Asia. I initially thought, mistakenly it turns out, that these people had travelled to Japan despite the COVID-19 pandemic. They were, in fact, locally-based nishikigoi buyers, further impressing me at just how popular these fish are overseas. 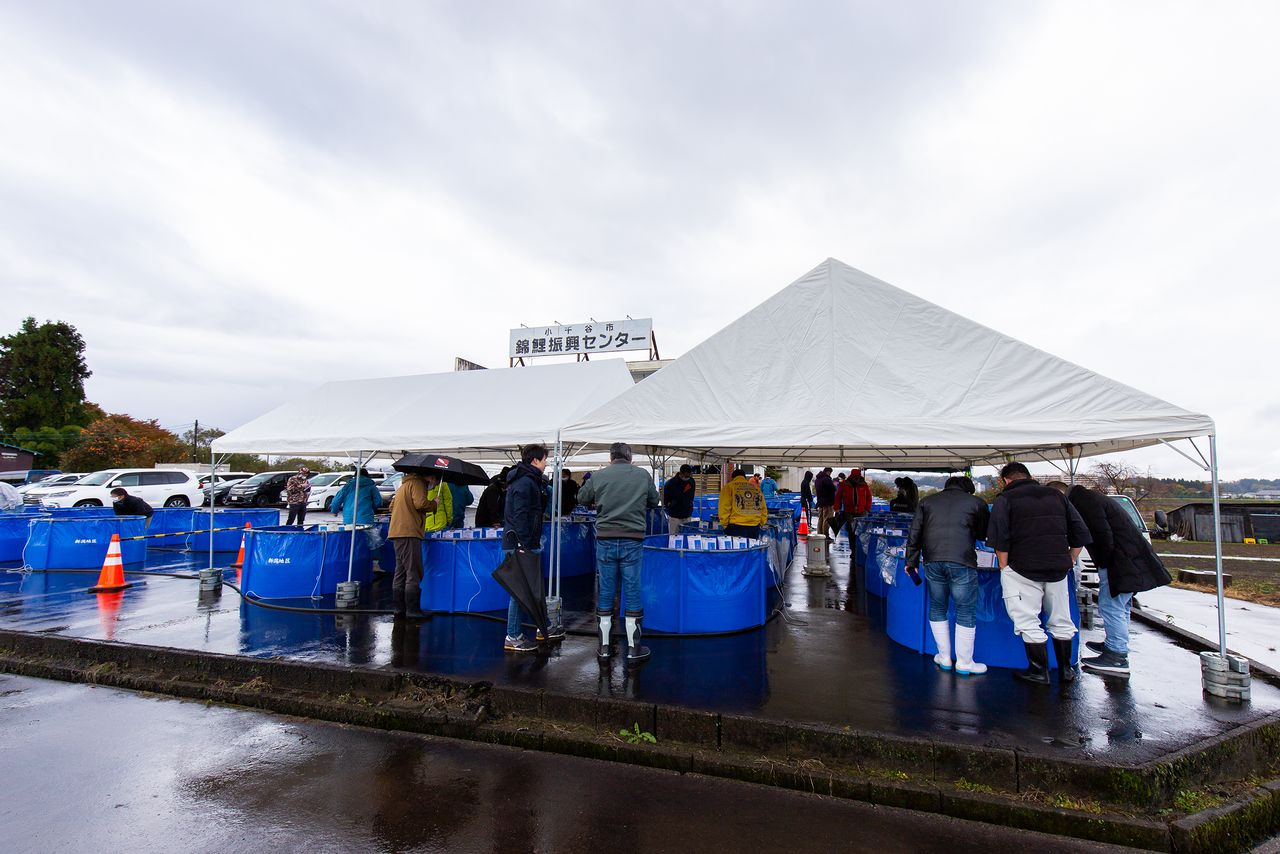 The Ojiya Nishikigoi Center in Niigata Prefecture hosted the event by former employees of the Dainichi Koi Farm. 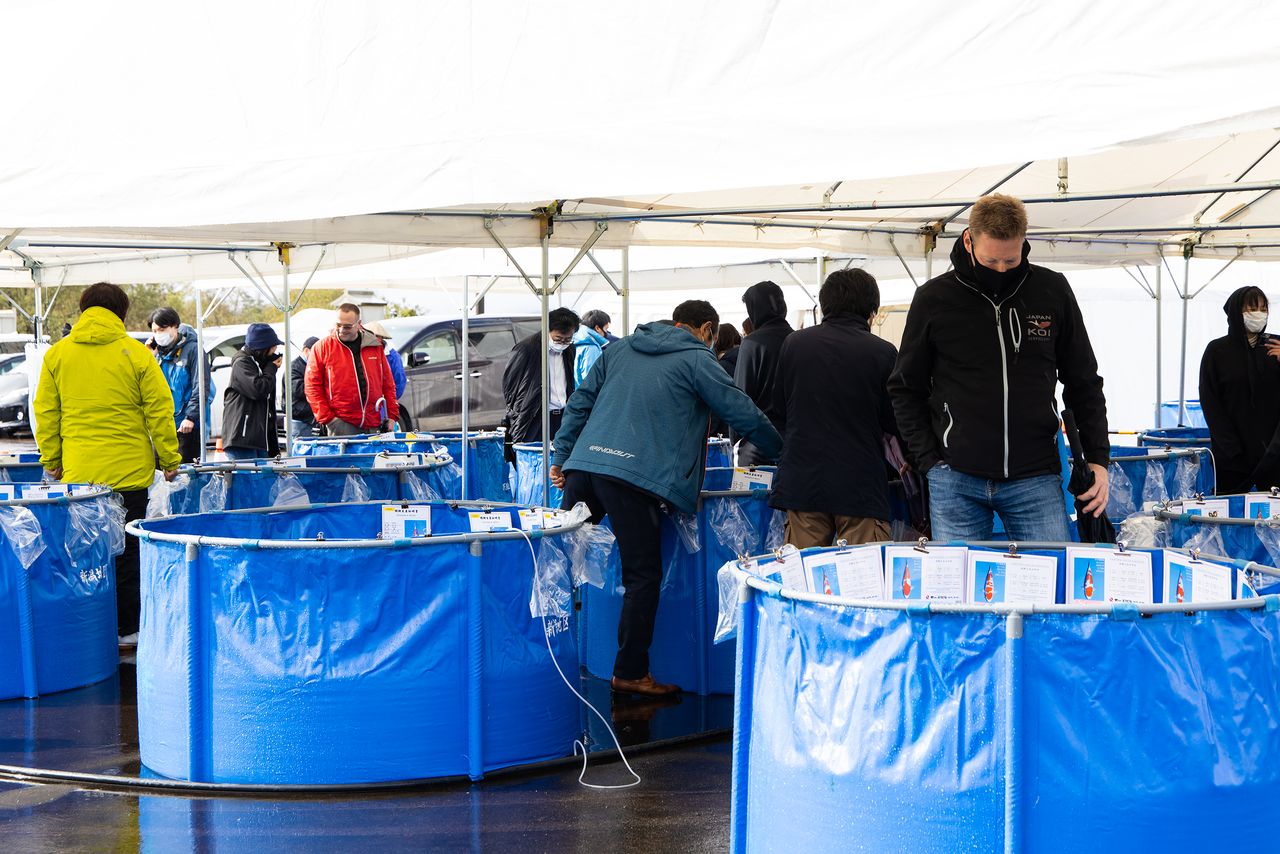 Nogami Hisato, chair of the host organization and 40-year industry veteran, admits that he first considered foreign interest in nishikigoi to be a passing fad. “In the old days, I never thought that overseas buyers would come to Japan just to buy carp,” he says, “or that I would travel abroad to sell them. I was certain that the international nishikigoi craze was a flash in the pan, but twenty years later, it’s still going strong.”

The youth of buyers is helping drive this trend. While nishikigoi enthusiasts in Japan tend to be older, the fanbase overseas includes a sizable proportion of younger people, suggesting that interest will remain high for the foreseeable future. Although Japanese breeders are steadily graying, Nogami insists that the industry is on firm footing for the future, proudly pointing to the large contingent of up-and-coming farmers. Carp breeding is a demanding job, involving daily care of stock, a lot of trial and error when breeding fish, and even an artistic sensibility. The effort required presents a challenge for newcomers, but the global market for nishikigoi offers successful breeders a chance to make a lot of money, making it an attractive career for young people. 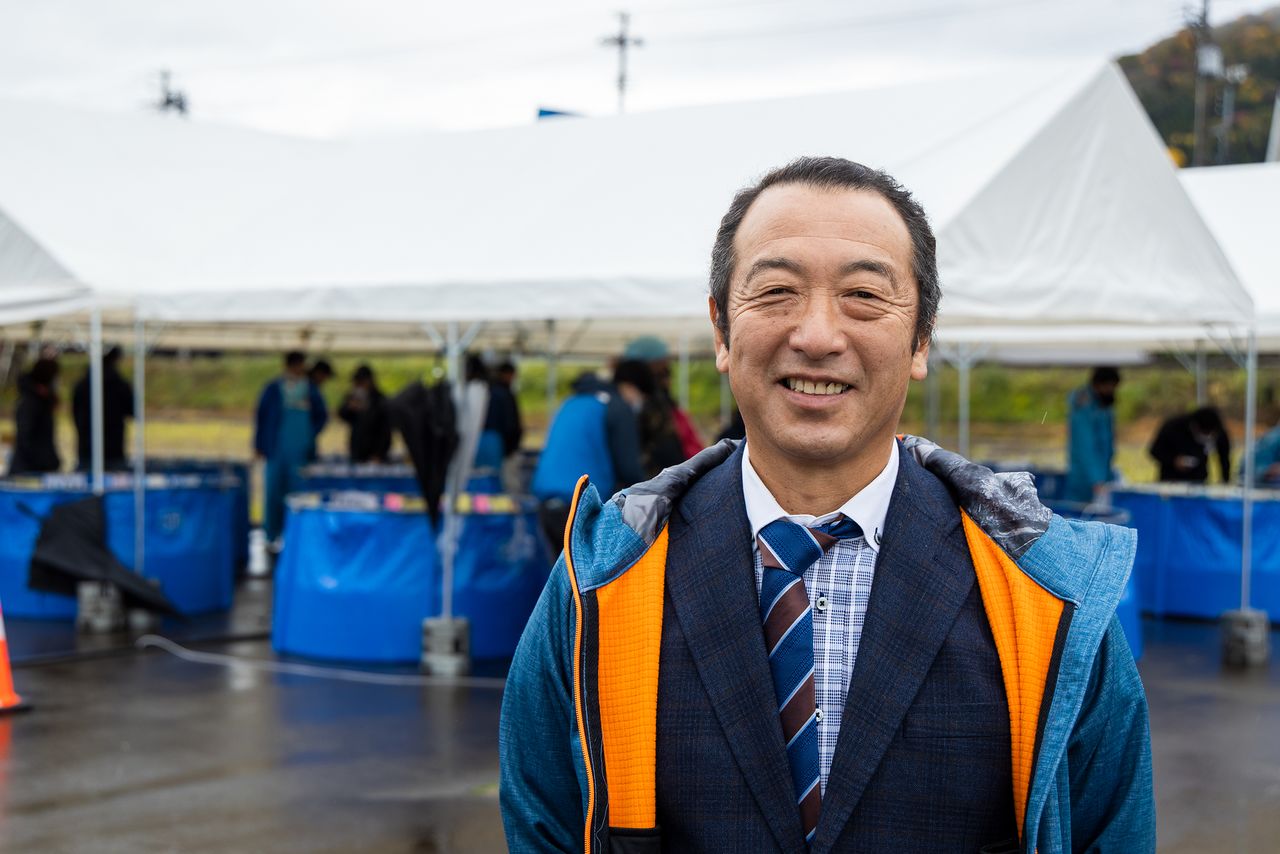 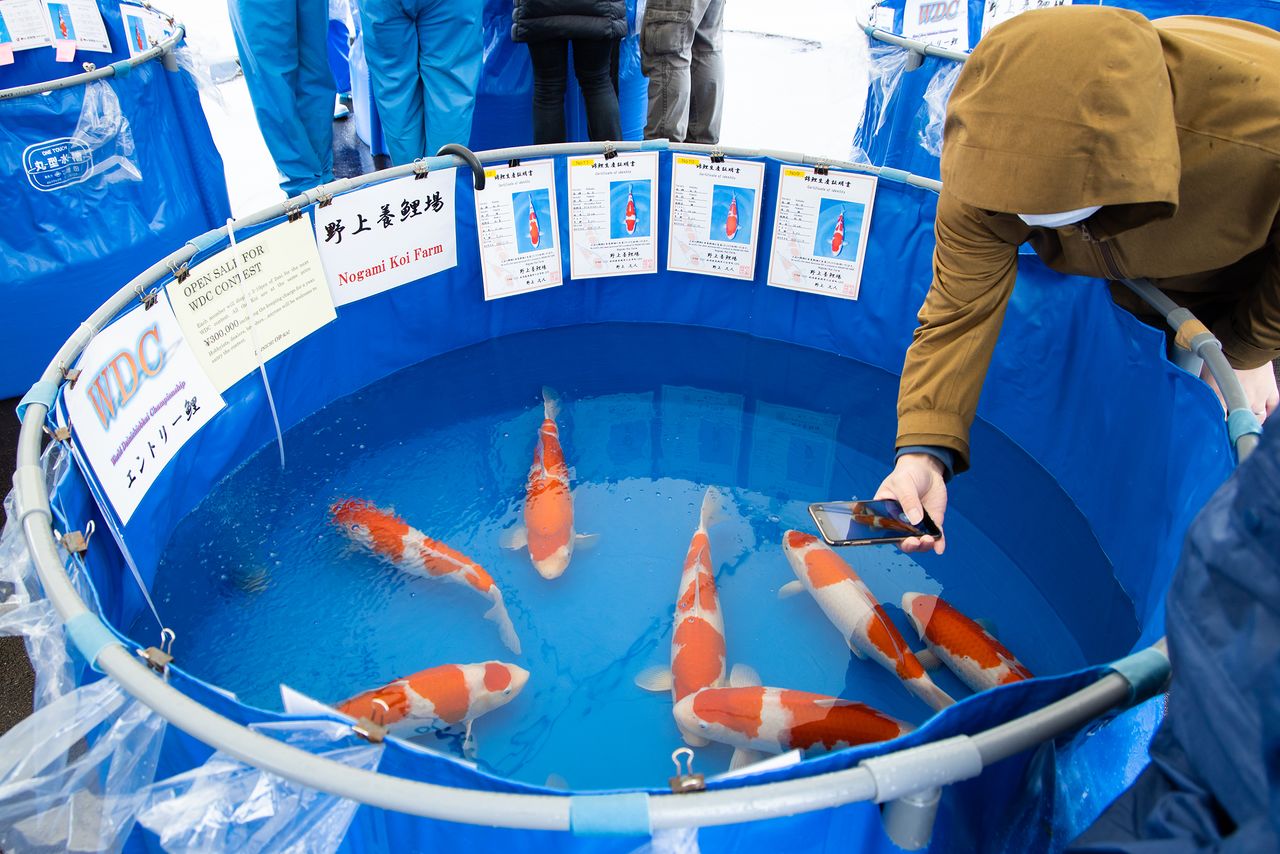 Buyers send photos and videos of fish to overseas collectors in real time.

Isa Mitsunori, head of the Niigata chapter of the All Japan Nishikigoi Promotion Association, says that while he welcomes the influx of young farmers, he also has concerns. The industry is enjoying burgeoning exports and high prices paid by overseas buyers, but the enthusiasm is not shared by the Japanese public, who Isa says are starting to forget how special the nishikigoi is. He places the blame for this on the industry’s inability to shake the image that the ornamental fish are a hobby for the wealthy. While top specimens fetch high prices, he wants more people to understand that they can buy a juvenile nishikigoi for a few hundred yen and keep it in a fish tank. 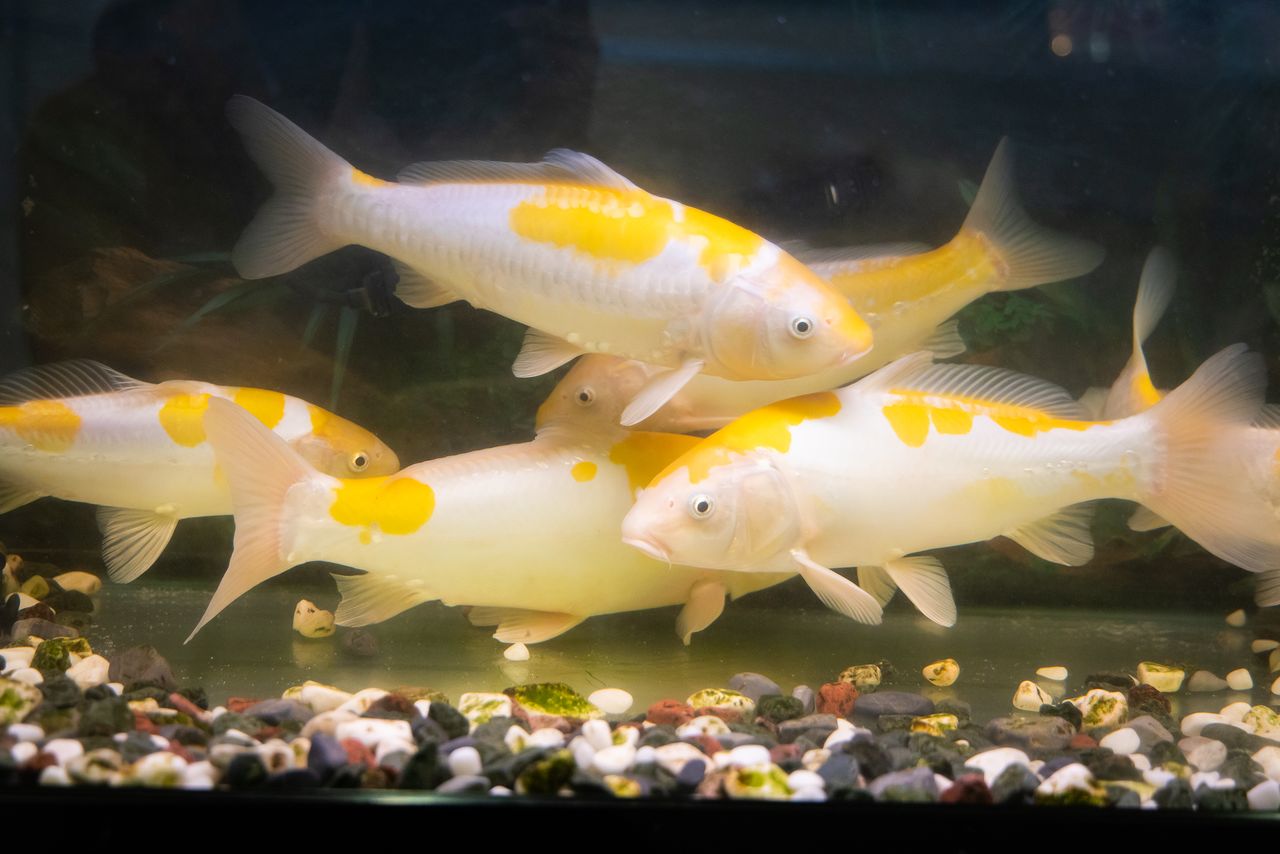 Young carp of the kijiro variety in a home aquarium.

Carp grow to the size of their surroundings, which is why breeders keep their stock in large ponds during the warm months between spring and autumn. By the same token, a fish kept in a household aquarium will remain relatively small. In Europe, inexpensive juvenile carp are popular family pets, with children in households often being put in charge of feeding.

Isa also points to the growing number of skilled koi farmers in Europe and elsewhere, a development directly attributable to the export of top-level nishikigoi abroad. “Breeders overseas are not yet at the level of Japanese farmers,” he explains. ”However, many, especially those in China, are seeing good results and will one day be serious competitors.” He warns that there might come a day when people in other countries will not even realize that nishikigoi originated in Japan and asserts that decisive steps need to be taken to prevent this from happening. “I believe that we need to make it our national fish, advertise the fact that this treasure comes from Japan, and boost its popularity with the local population.” 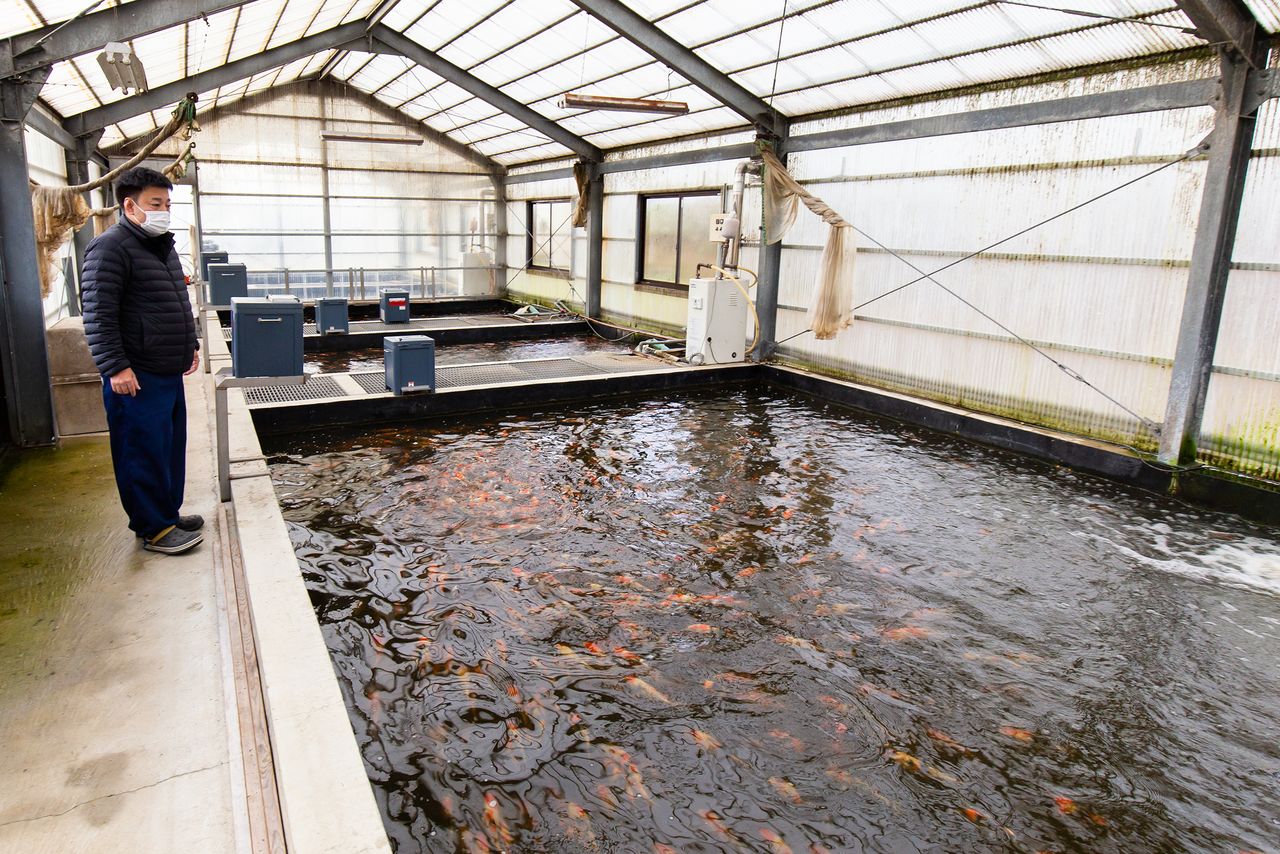 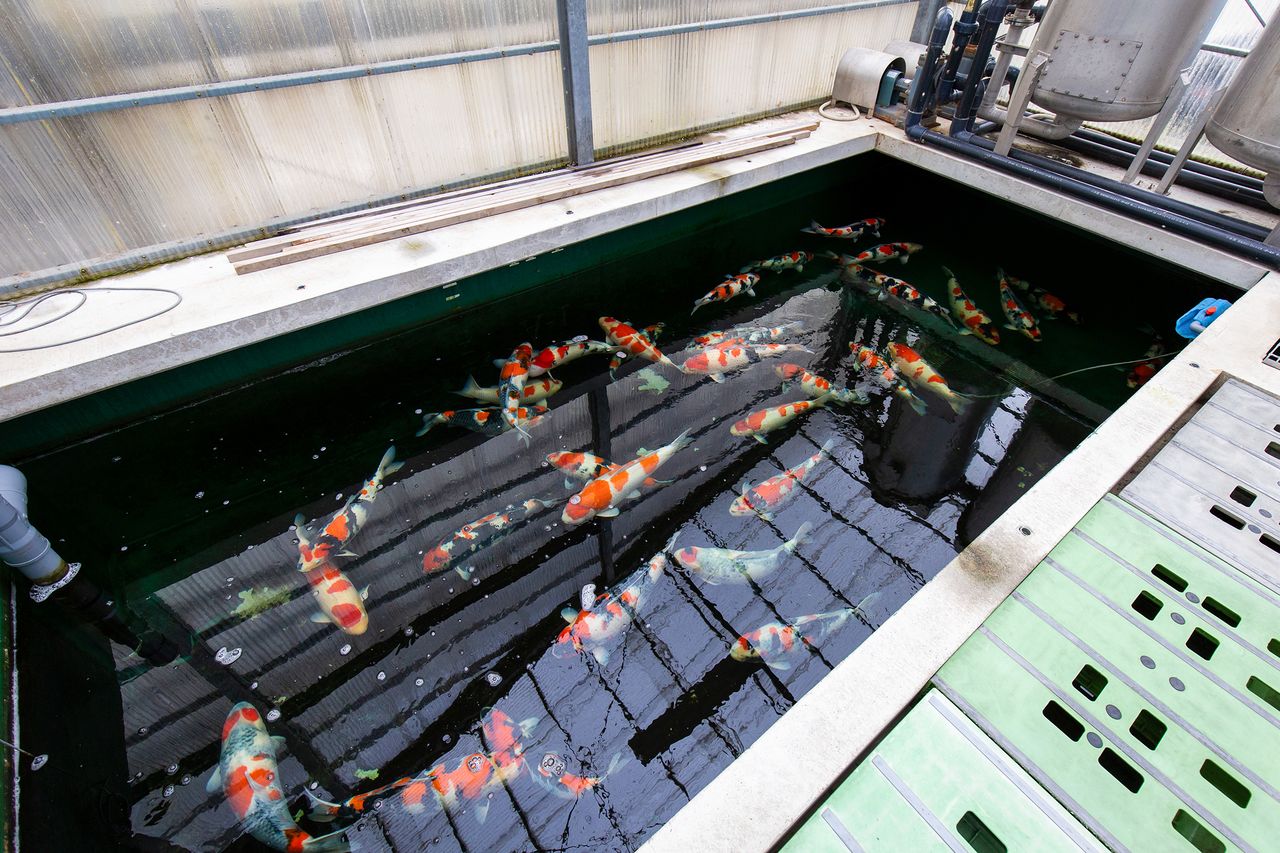 To prepare nishikigoi for exhibit at a show, they are kept in a large pond to allow them plenty of space to grow.

Nishikigoi no Sato, a tourist information center in Ojiya in Niigata Prefecture, offers visitors a chance to learn about the different aspects of ornamental carp, including their history, the various varieties, and farming techniques. Adjacent to the center’s exhibition area is a Japanese garden with a large pond containing over 300 fish. 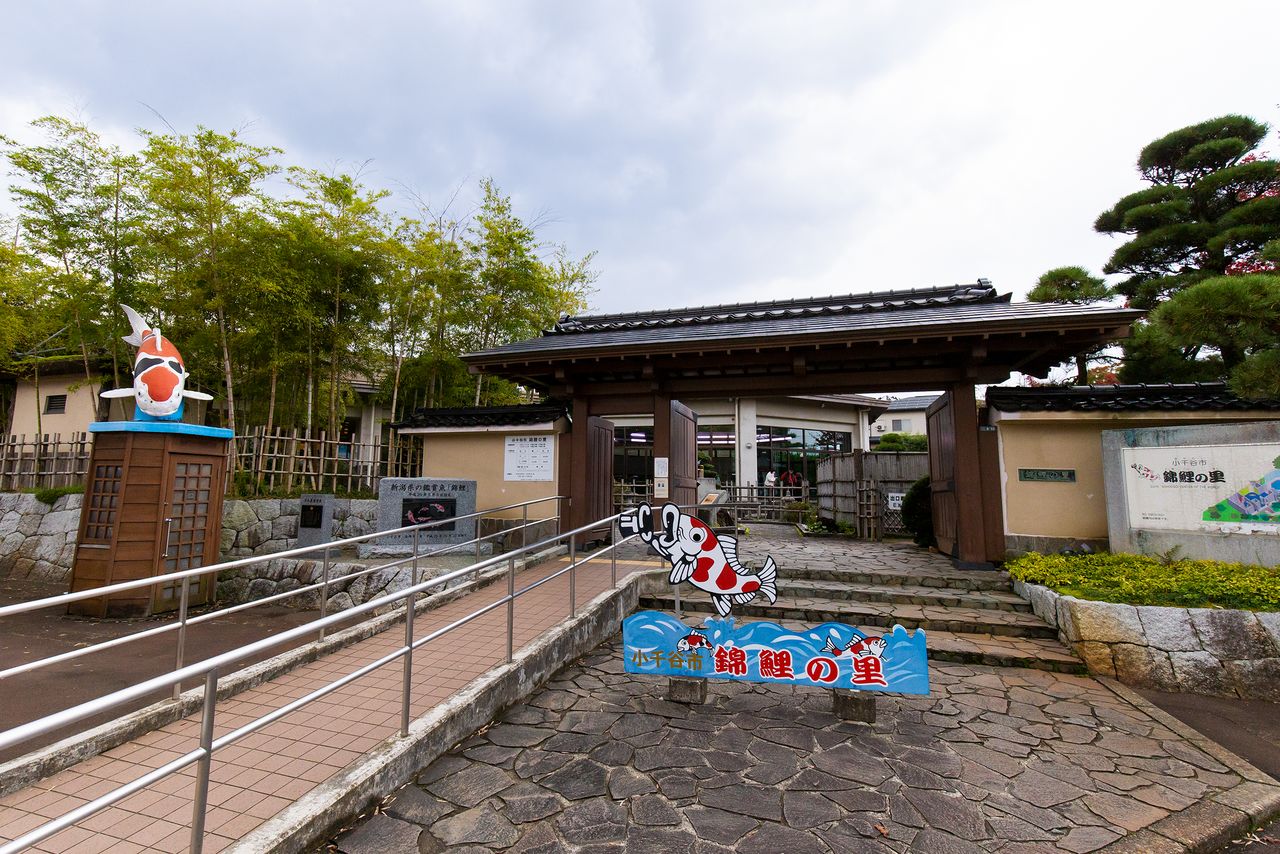 The entrance of Nishikigoi no Sato. Tickets are ¥520 for adults and ¥310 for elementary and junior high school students. The facility is around 10 minutes by bus from Ojiya Station on the JR Jōetsu Line.

What makes this facility unique is the fact that around 250 of the nishikigoi on display are privately owned. People purchasing locally-bred carp are able to entrust the fish to the facility for free on the condition of keeping them there for at least one year. After that time, owners are able to take their nishikigoi home once they have determined the fish has reached a suitable size. This approach serves the dual purpose of ensuring that more carp are raised while also giving members of the public a chance to view the fish. Visitors can feed the specimens displayed in the pond, an activity that is especially popular with young children. 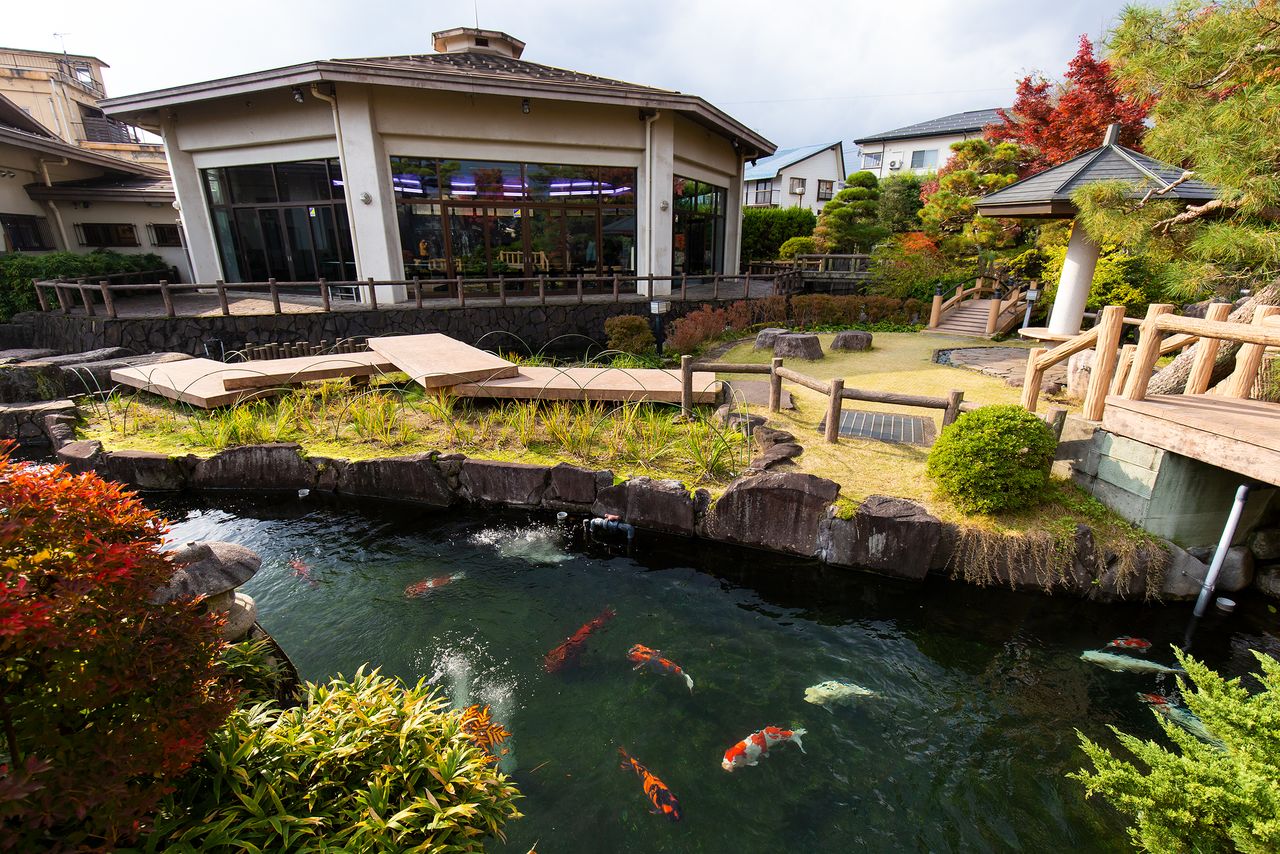 Nishikigoi swimming in an outdoor pond will be transferred to indoor tanks once the weather turns cold in November. 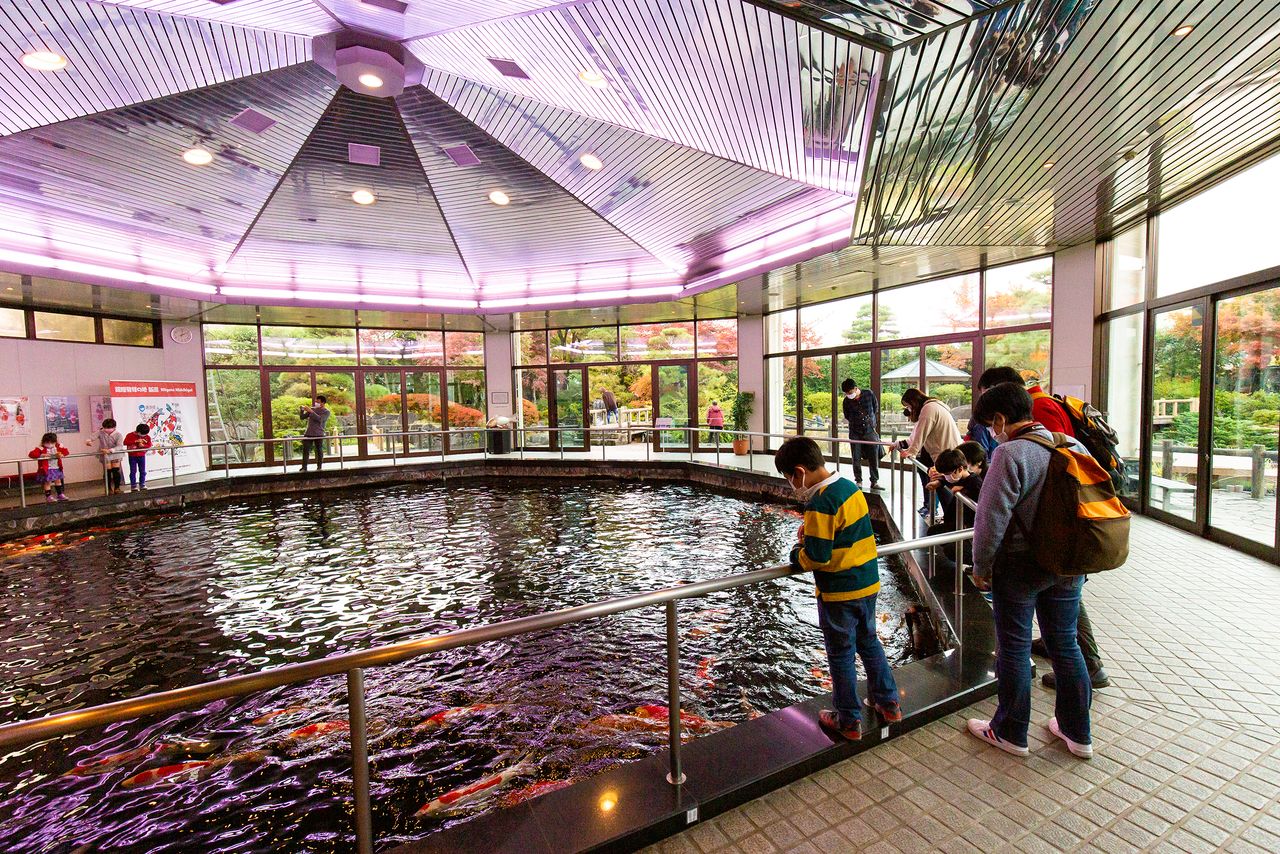 In the viewing area, young children are entranced by nishikigoi.

The success of the carp farming industry has also made possible the preservation of some of Niigata’s natural surroundings, a tourist attraction in their own right. Take for instance the practice of cultivating rice in terraced paddies. As local population of rice growers gets older, the traditional growing method is falling out of practice due to the significant burden involved. By converting the paddies to carp ponds, however, it has been possible to preserve this idyllic scene. In 2017, terraced rice farms in the Chūetsu region were listed as Japanese agricultural heritage in recognition of their implementation of systems that used snow to enable the farming of both rice and carp. In 2020, the community of Yamakoshi timed its inaugural pageant featuring terraced paddies lit up with electric lights with the famed Nagaoka fireworks show. 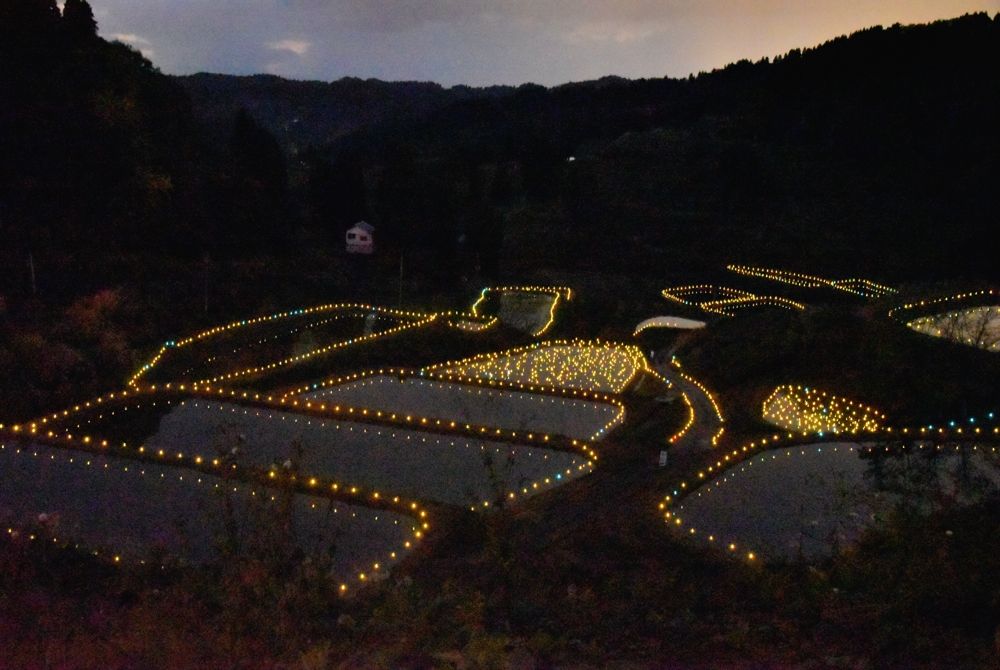 Terraced paddies and ponds lit up during the inaugural pageant. (Courtesy Nagaoka Incorporated Association of Tourism and Conventions) 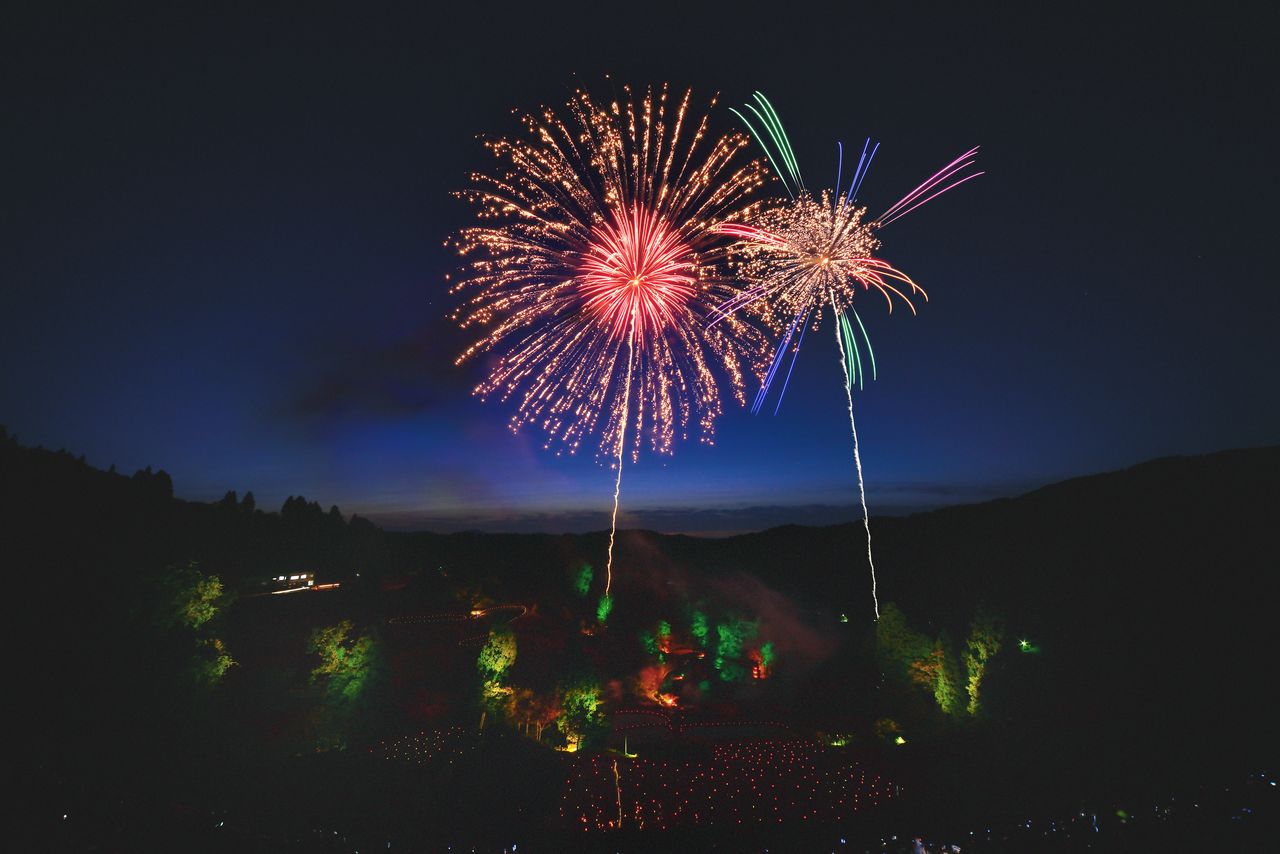 Efforts to recognize nishikigoi as Japan’s official fish are gaining momentum. In 2019, the ruling Liberal Democratic Party established a league of Diet members with the goal of promoting nishikigoi culture and the industry as a whole. That same year, the All Japan Nishikigoi Promotion Association’s poster featured an ink drawing of a carp by Tanaka Kakuei inscribed with the word kokugyo (national fish).

Hopes are high in the industry that growing overseas demand for nishikigoi will rekindle domestic interest in the fish and bolster appreciation of it as a national treasure. 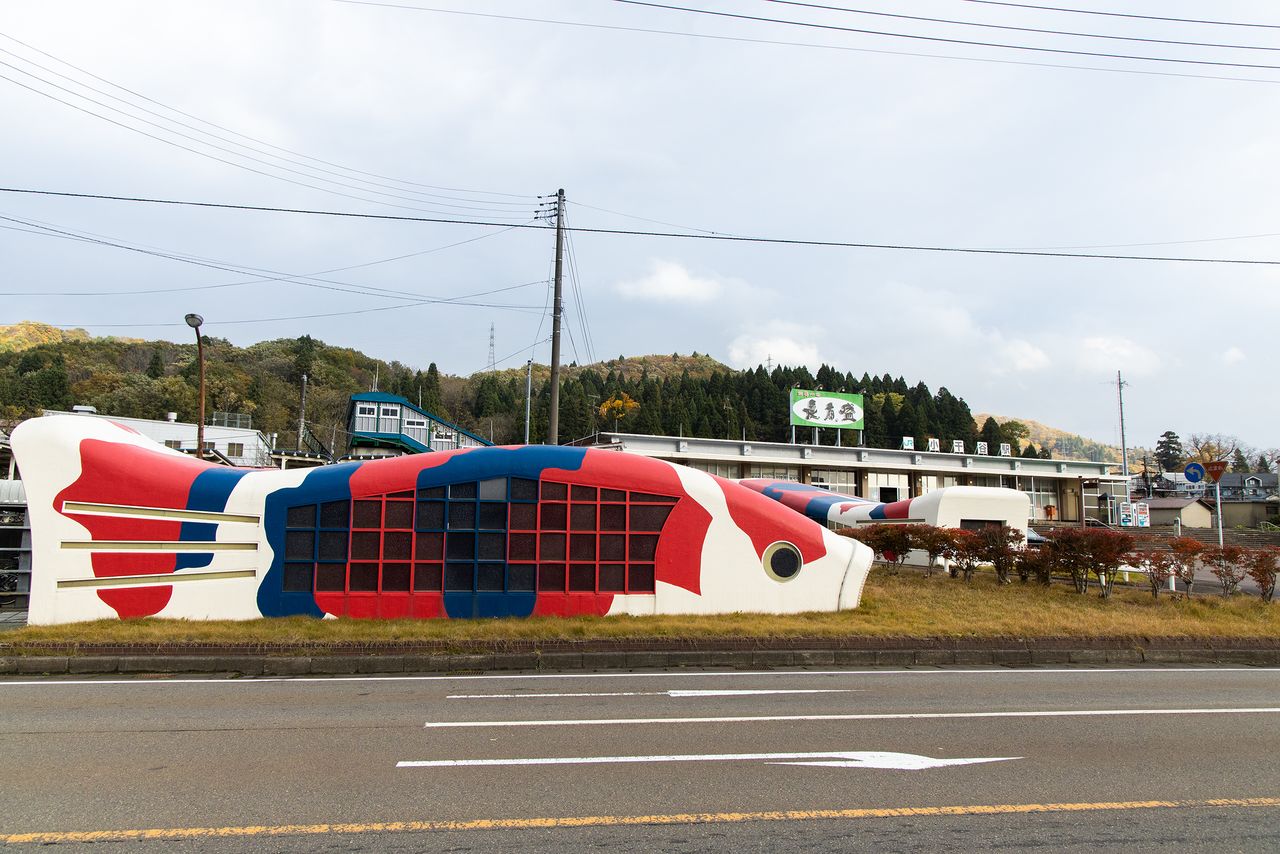 The entrance to an underground walkway near Ojiya Station is shaped like a nishikigoi.

(Originally published in Japanese. Reporting, text, and photos by Nippon.com, except where otherwise noted. Banner photo: Carp swimming in the pond at Nishikigoi no Sato.)