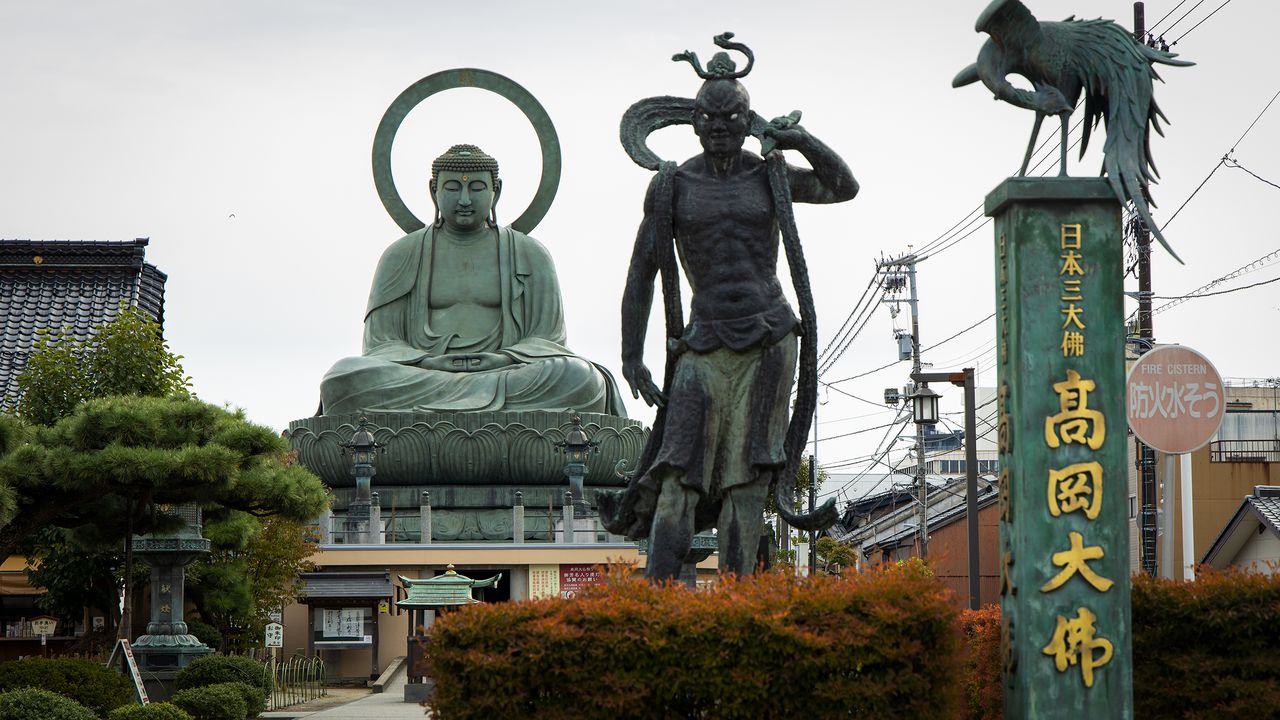 Takaoka: A Metalworking Townscape Beneath the Buddha’s Gaze

Art Travel Apr 9, 2021
Takaoka, a city in Toyama Prefecture, has been a center for metal casting since the early years of the Edo period (1603–1868) and is the country’s leading producer of copperware. Here we introduce the Takaoka Daibutsu (Great Buddha), symbol of Takaoka’s craft, and the Kanayamachi heritage district, the birthplace of the local cast-metal industry and a popular tourist attraction.

Saying “Daibutsu” reminds many people of the Great Buddha statue at Tōdaiji in Nara or the open-air seated giant at Kamakura’s Kōtokuin. Those are two widely known historic “greats,” but Japanese tend to like groupings of three, so which are the contenders for the number three spot? In the running are the Takaoka Daibutsu (at Daibutsuji, Takaoka), the Gifu Daibutsu (at Shōbōji, Gifu), the Hyōgo Daibutsu (at Nōfukuji, Kobe), and the Tokyo Daibutsu (at Jōrenji, Itabashi). Although factors like history, prestige, size, and artistic value come into play when rankings are assigned, each of these statues is venerated by its local community. Local Great Buddhas are also tourist draws, and each locality vies to outdo the others in claiming its own statue as one of the “big three” Daibutsu of Japan. 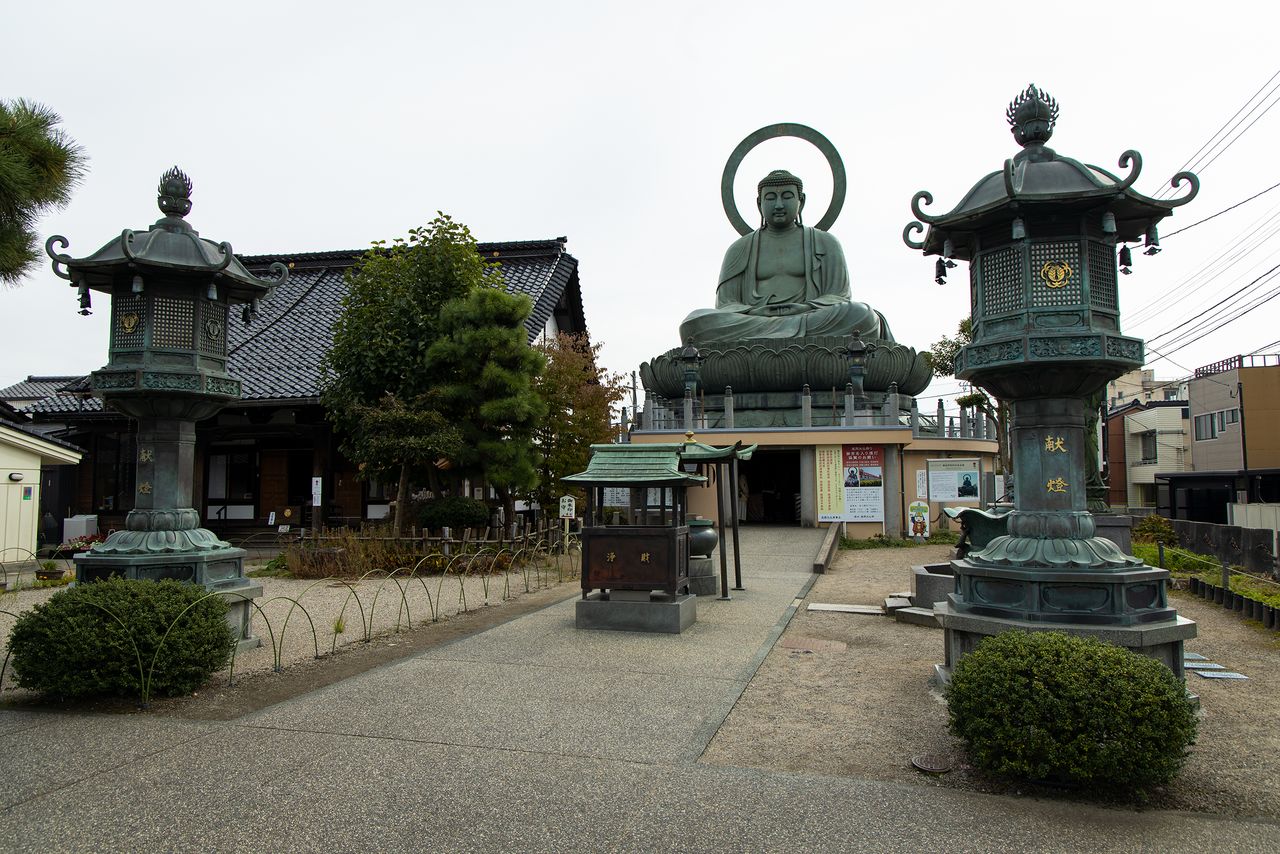 Often counted among the three Great Buddhas, the Takaoka Daibutsu is a 10-minute walk from Takaoka Station on the Ainokaze Toyama Railway.

The Takaoka Daibutsu, in particular, symbolizes the local traditional craft of metal casting, which has flourished in Takaoka since the seventeenth century. The city is famous for copperware in the form of tea ceremony wares, vases, Buddhist altar fittings, and other articles. When Maeda Toshinaga (1562–1614), head of the Kaga fief, built a castle at Takaoka, he moved to the town a wooden statue of Buddha created in the thirteenth century that originally stood on Mount Futagami , northwest of Takaoka. After the statue was destroyed twice by fire, in 1821 and 1900, it was decided to rebuild it in fire-resistant copper. Created partly to promote the local copperware industry, the current Takaoka Daibutsu was made by local artisans and completed in 1933.

Including its base, the Takaoka Daibutsu stands 15.85 meters tall. The statue itself is 7.43 meters tall, roughly half the height of the 15-meter Daibutsu in Nara. Representing Amida Nyorai (Amitābha), Takaoka’s statue is known for its handsome facial features and the exquisitely crafted disc of light behind its head. The poet Yosano Akiko, who celebrated the fine features of Shakyamuni, the Kamakura Daibutsu, in one of her works, supposedly found the Takaoka Daibutsu even more good-looking when she visited Takaoka soon after the statue’s completion. 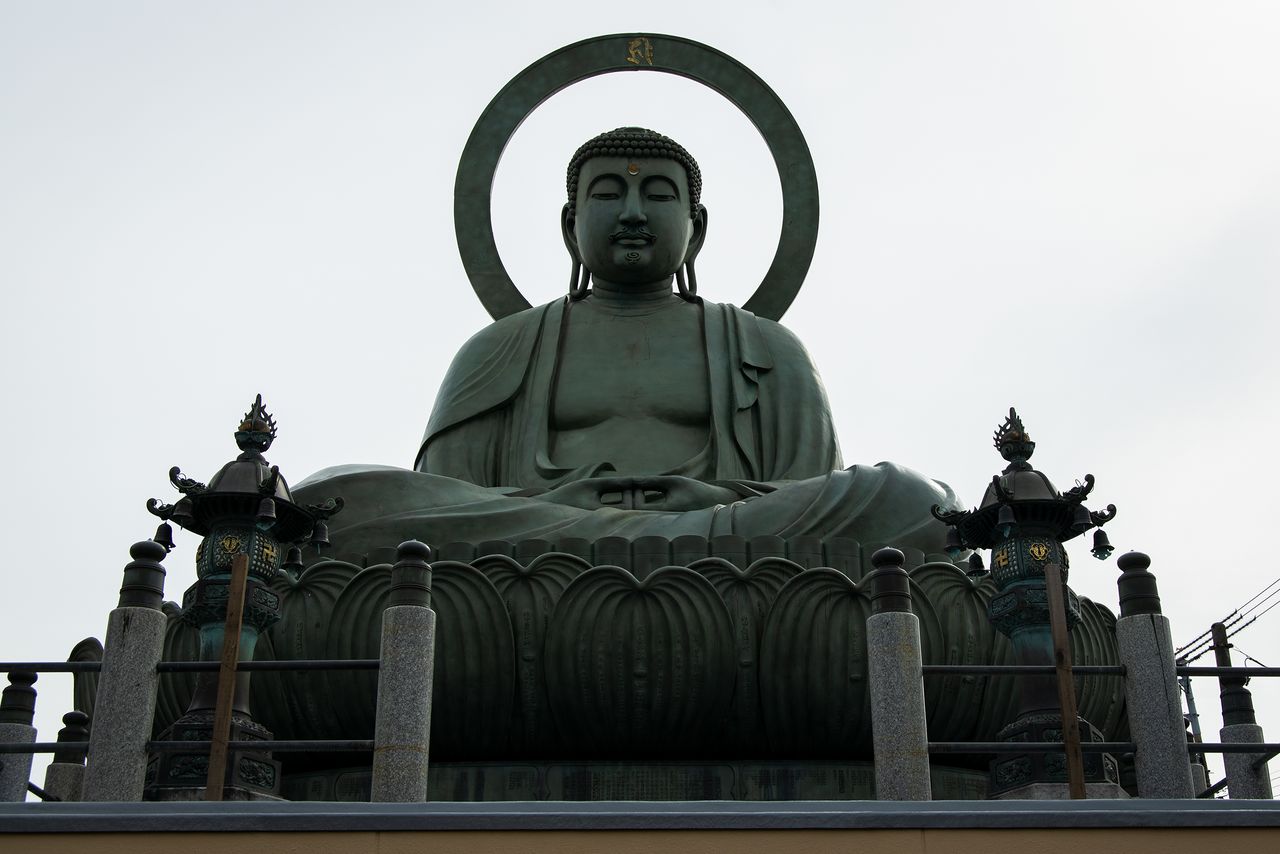 The Daibutsu’s handsome features are testament to the skills of Takaoka’s copperware artisans. This statue is unusual for the disc of light behind its head.

The Takaoka metal casting industry was born when Toshinaga invited seven metal-casting artisans from his home district to settle in Kanayamachi. At first, production was mainly of farming implements and household articles like pots and kettles, but beginning in the eighteenth century, artisans started making copper alloy vases, tea ceremony wares, and Buddhist altar fittings with chased metal decoration. By the 1870s, Takaoka copperware was being shown at overseas expositions, where it garnered high praise and grew in popularity both at home and abroad. Today, Takaoka copperware accounts for over 90% of domestic production, and the region’s artisans make everything from temple bells and bronze statues to smaller items like accessories, as well as vases and altar fittings for home use.

Today, many manufacturers of cast metal products have relocated to the Takaoka industrial copperware complex, but some stayed behind in Kanayamachi, which is now an officially designated heritage district. The area, home to artisans’ galleries and shops, antique sellers dealing in copperware and iron kettles, and restaurants and cafés, also attracts many visitors. Their first stop should be the Takaoka City Metal Casting Museum, located near the start of Kanayamachi’s main cobblestoned road, where they can learn about the area’s history and about metal-casting technology. 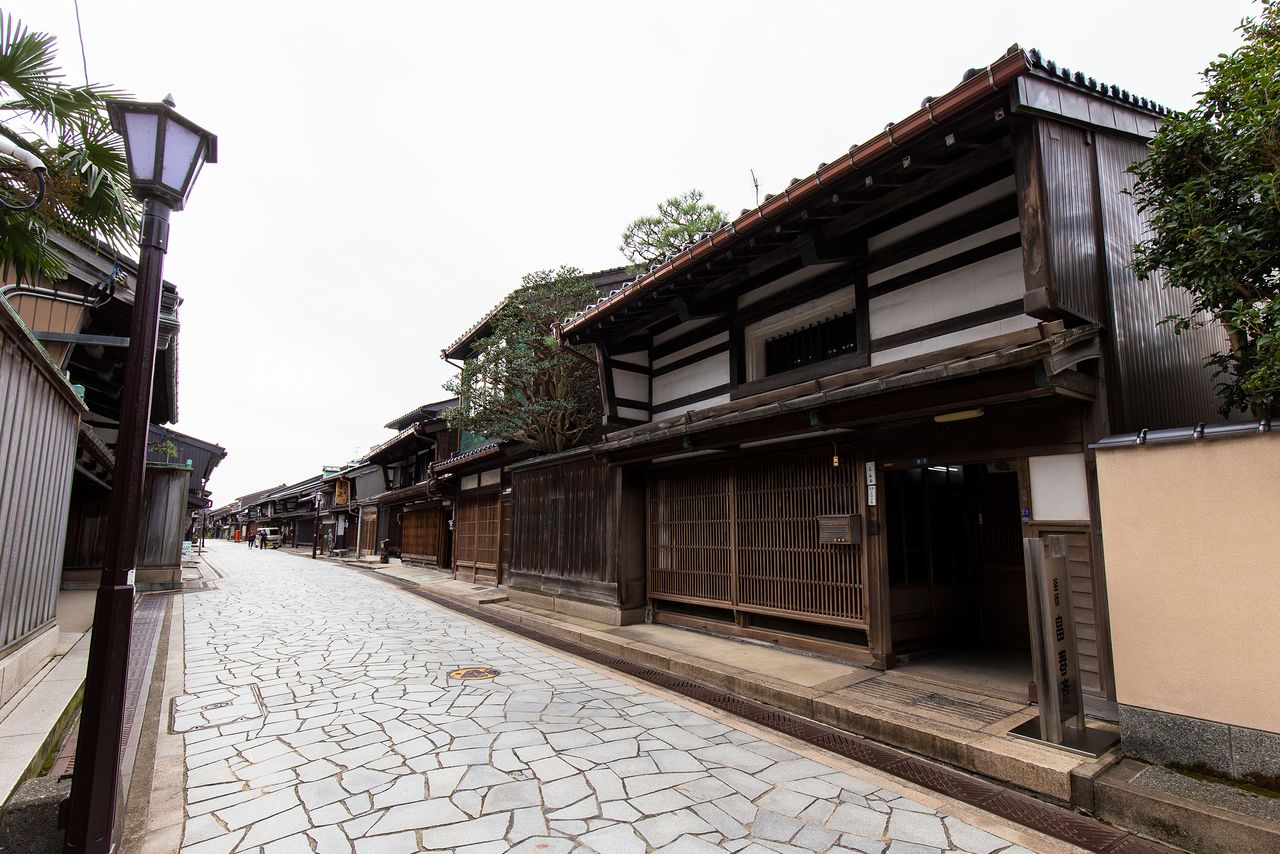 Buildings in Kanayamachi feature vertical louvers called samanoko. Visitors can amuse themselves searching for the heart-shaped cast metal decorations embedded here and there among the cobblestones. 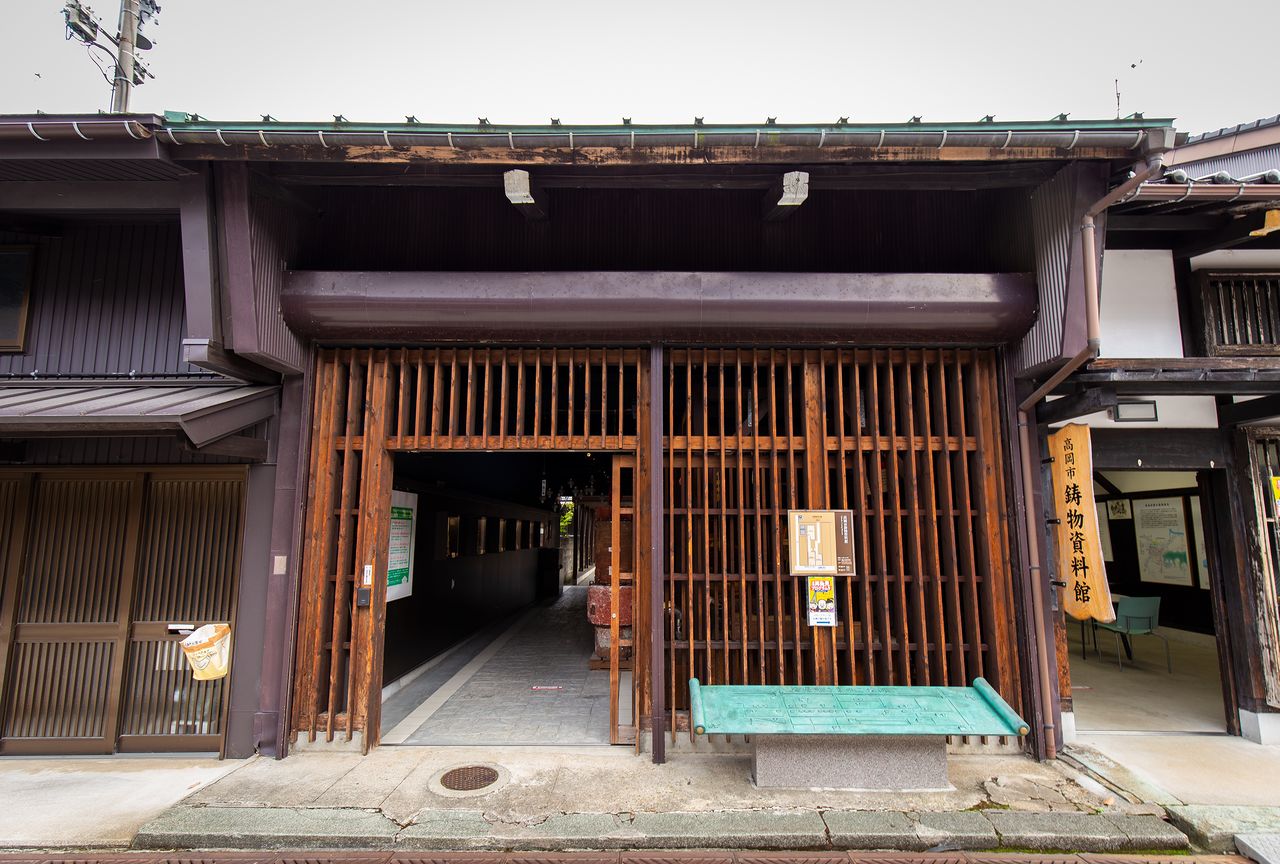 Metal casting equipment and artifacts used in the Edo period are on display at the Metal Casting Museum. Admission is free for junior high school students and younger guests; ¥300 for high schoolers and older visitors.

Along this street is Kōryō Kinjudō, where the copper statue that served as the model for the Takaoka Daibutsu is displayed. The statue was created using money donated by the community, and when the sculptor Nakano Sōzan created the model, he reputedly made several copies to be donated to supporters; this is one example.

Along with works by living national treasures Kanamori Eiichi and Ōzawa Kōmin, Kōryō Kinjudō features copperware creations by artists old and new. In the tatami-floored area at the rear of the shop, the dozens of beautiful teakettles and other objects collected from all over the country are also worth a look. 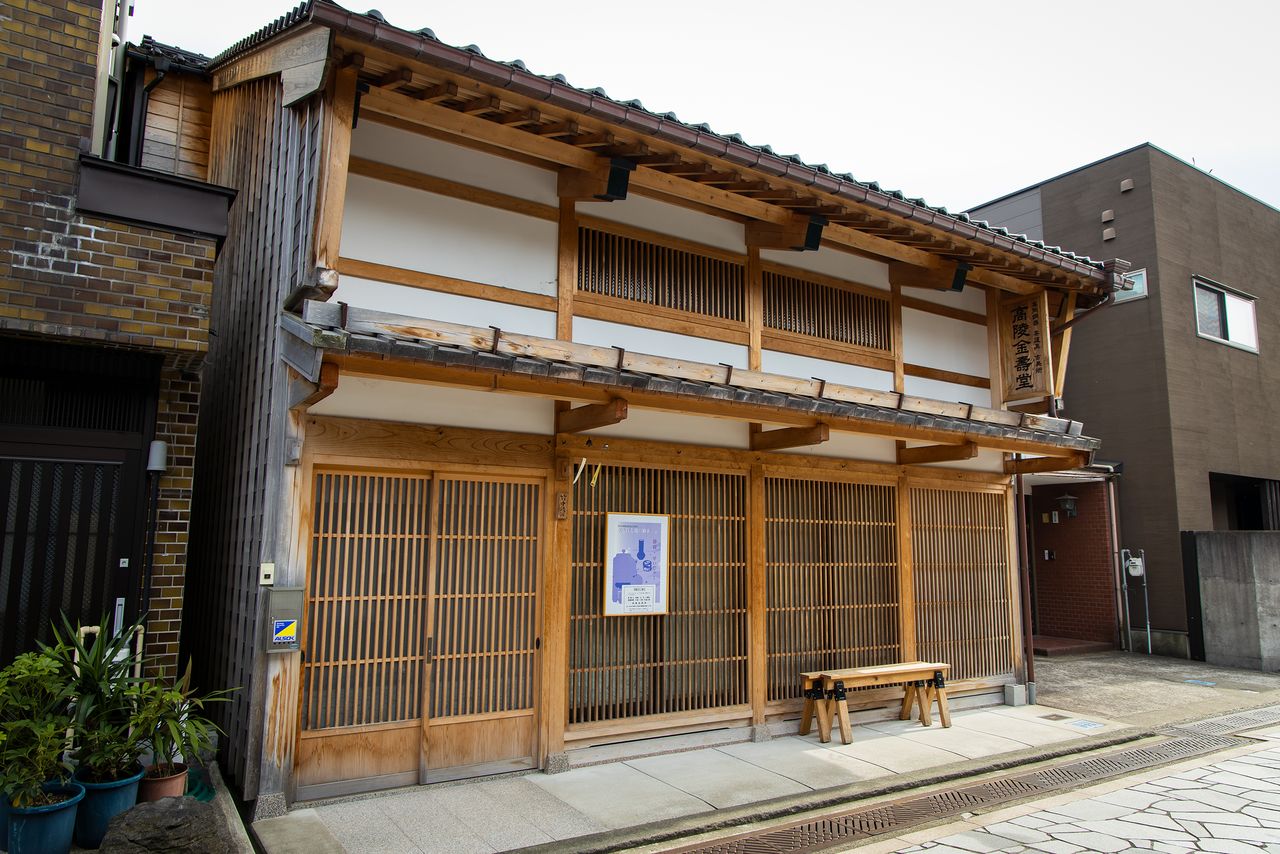 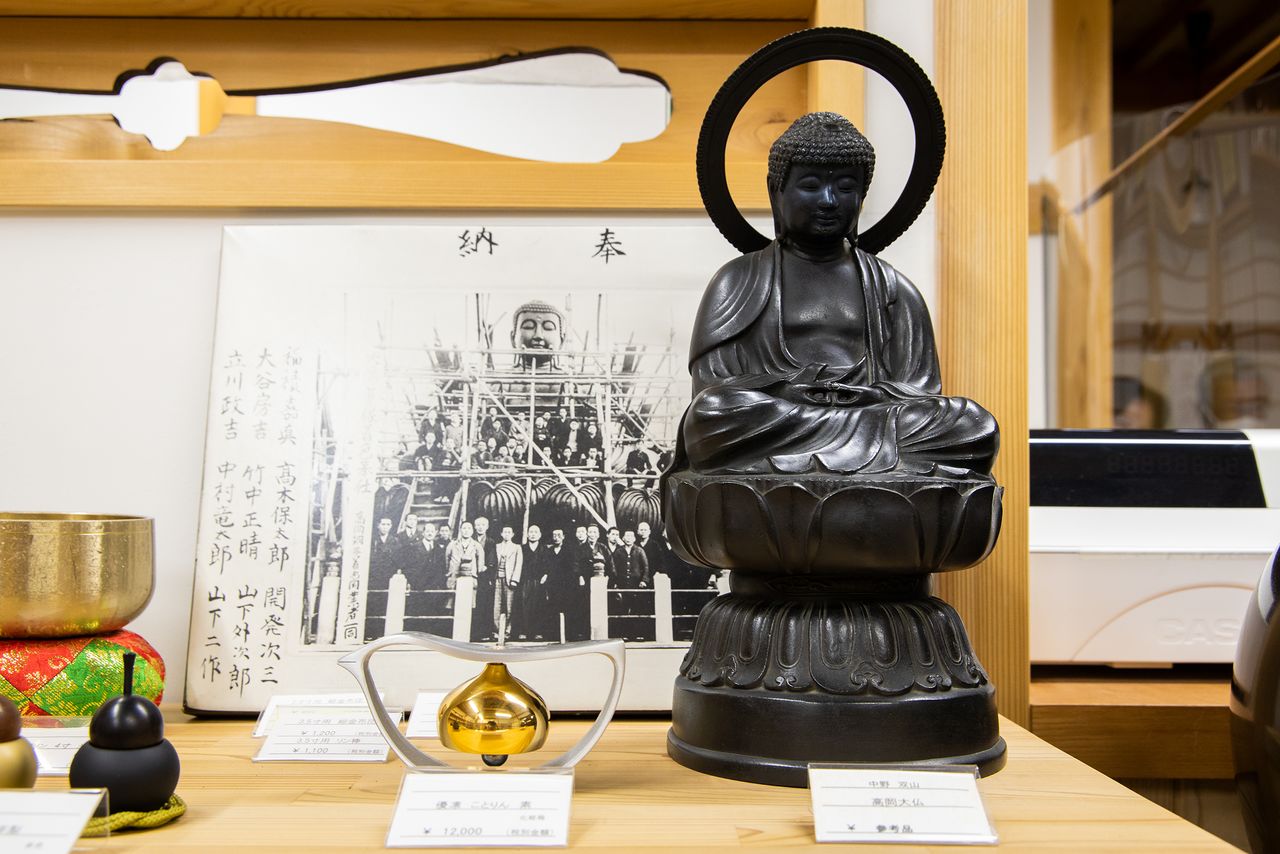 A copper statue used as the model for the Takaoka Daibutsu. 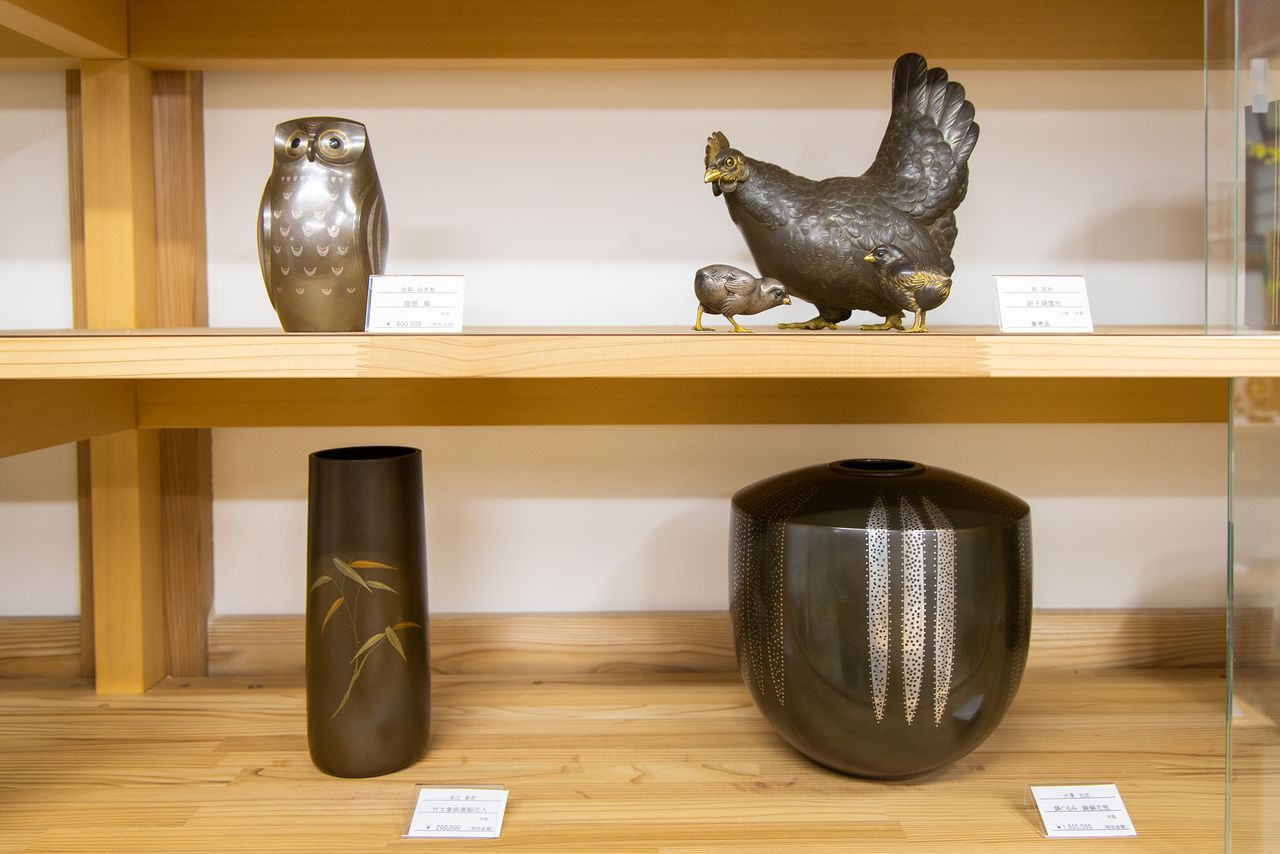 A silver/bronze owl with precious metal inlays by Kanamori Eiichi (upper left) and a cast copper vase by Ōzawa Kōmin (lower right) are among the museum’s holdings. 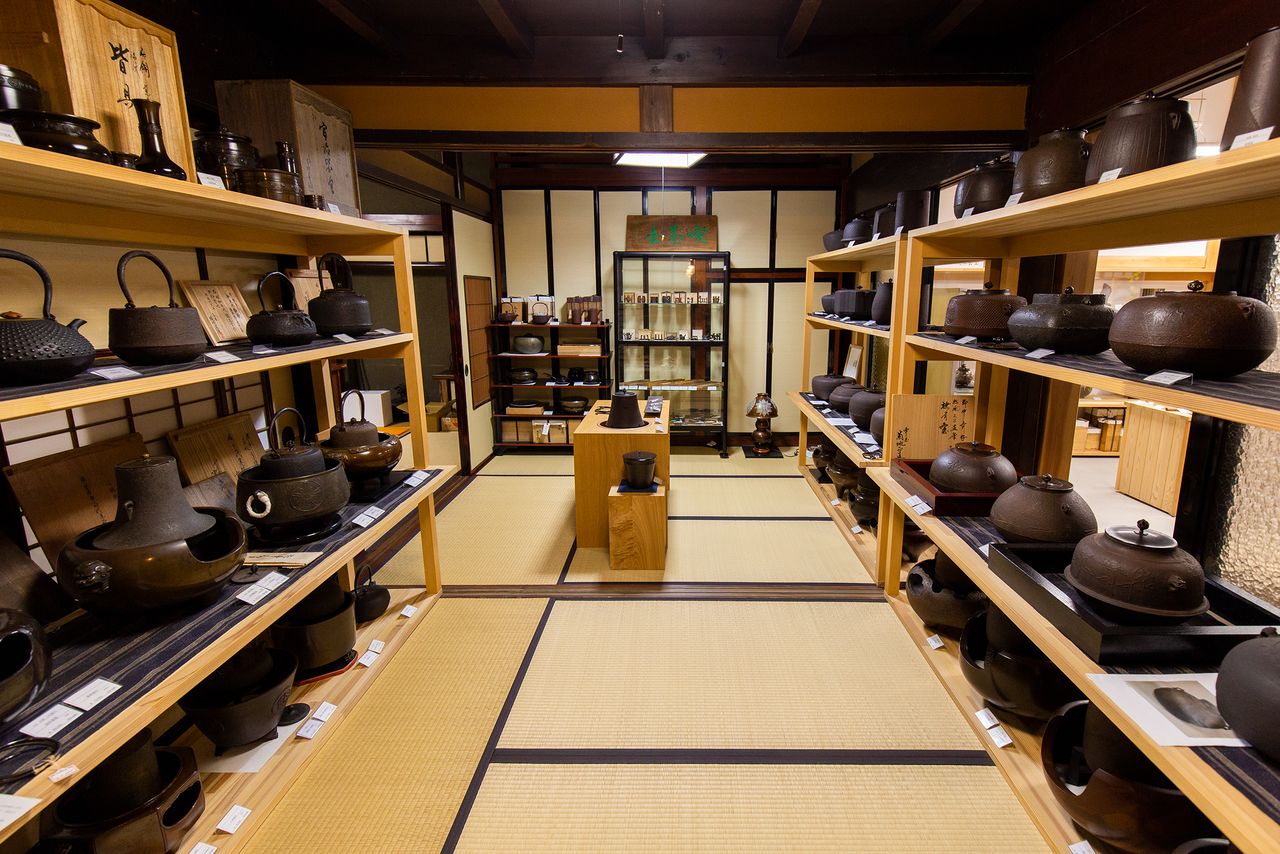 Exquisitely crafted tea ceremony wares are displayed at the rear of the store.

The Rizaburō Metal Casting Studio is one of the businesses that has remained in Kanayamachi. The shop sells vases and teakettles made by hand using traditional methods, and in the back is a studio where visitors can try their hand at metal casting. Using a nail to trace letters or decorations on sand molds into which molten tin is then poured, they can make a one-of-a-kind small dish or chopstick rest to take away as a souvenir of their visit. 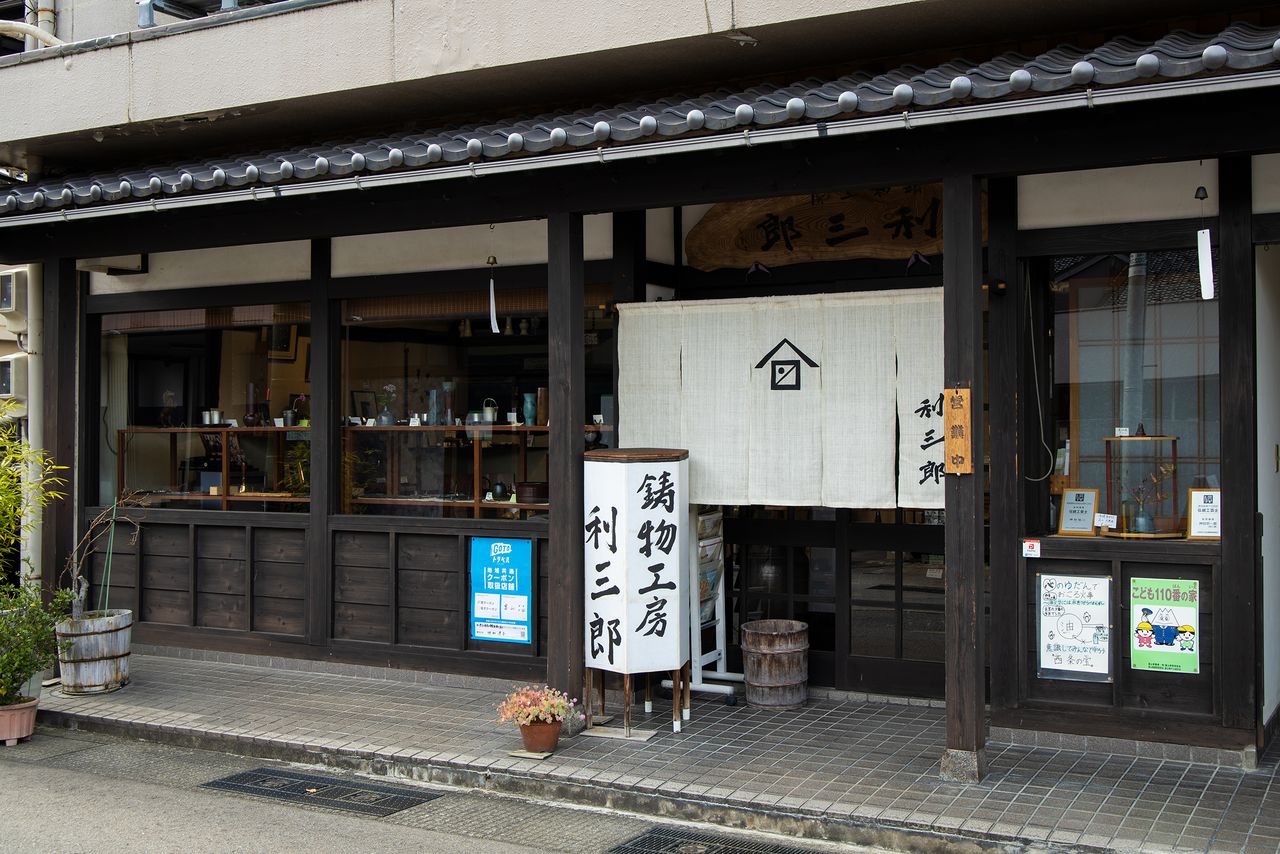 Entrance to the Rizaburō Metal Casting Studio, one street west of the cobblestoned main street. 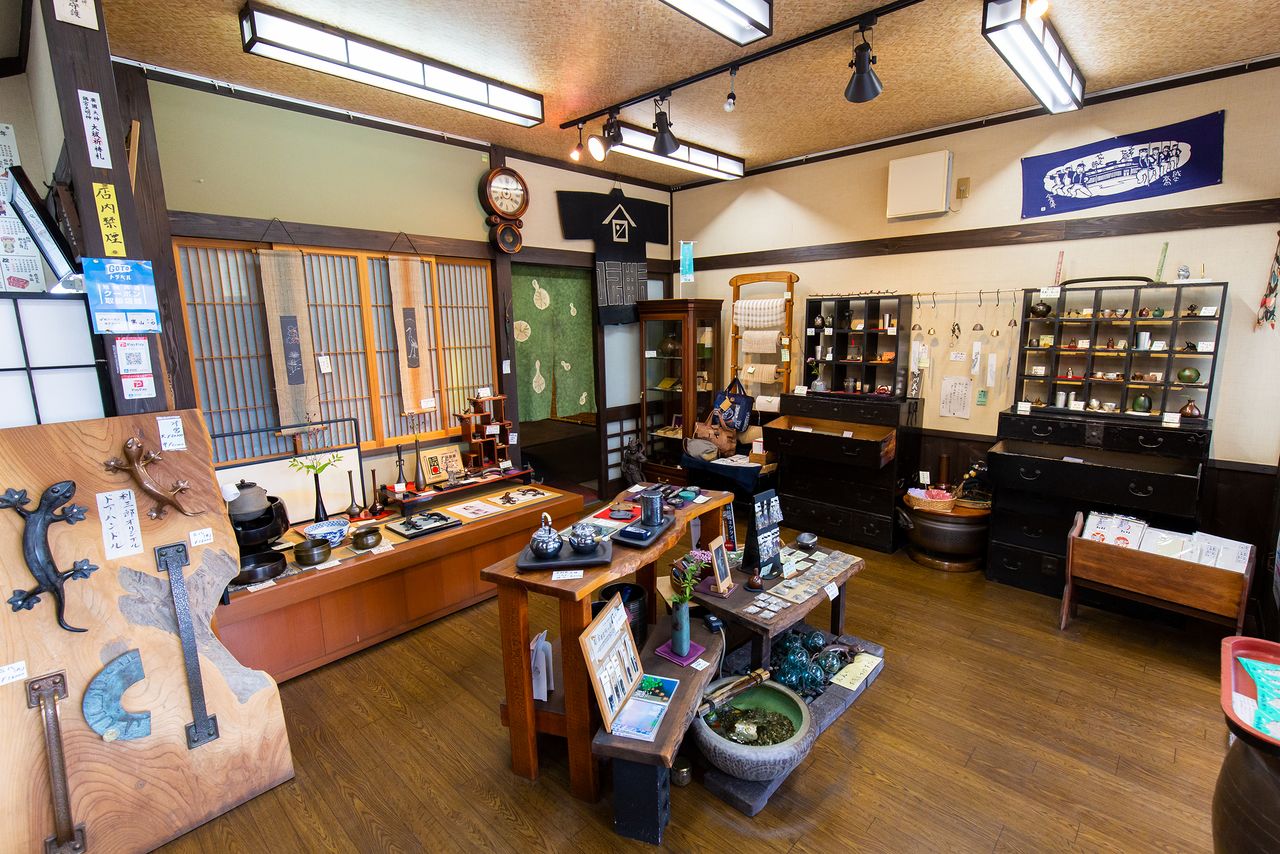 The shop sells a variety of cast metal products, from tea ceremony wares and vases to doorknobs. Behind the green curtain lies the studio where visitors can try metal casting.

Jinpachi Sōichirō, the fifth artisan to succeed to the Rizaburō name, has been practicing his craft for over 60 years. Using traditional skills while adding a modern element to his works, he says that continuing to work in Kanayamachi means a lot to him. He readily admits that his pieces sometimes do not turn out as he expects. That’s when he consults old records for hints. Every day presents a learning opportunity, and in the end, he thinks back on how his predecessors worked their craft.

“Sometimes when things don’t go right, I recall the old-timers’ physical movements, and when I imitate those movements, I finally ‘get’ things that I didn’t understand before. Experience has taught me that some particular techniques just work better.”

If the timing is right, visitors can tour the Rizaburō studio. The sight of seasoned artisans at work is a valuable experience, and visitors who want a tour should call ahead to make arrangements. 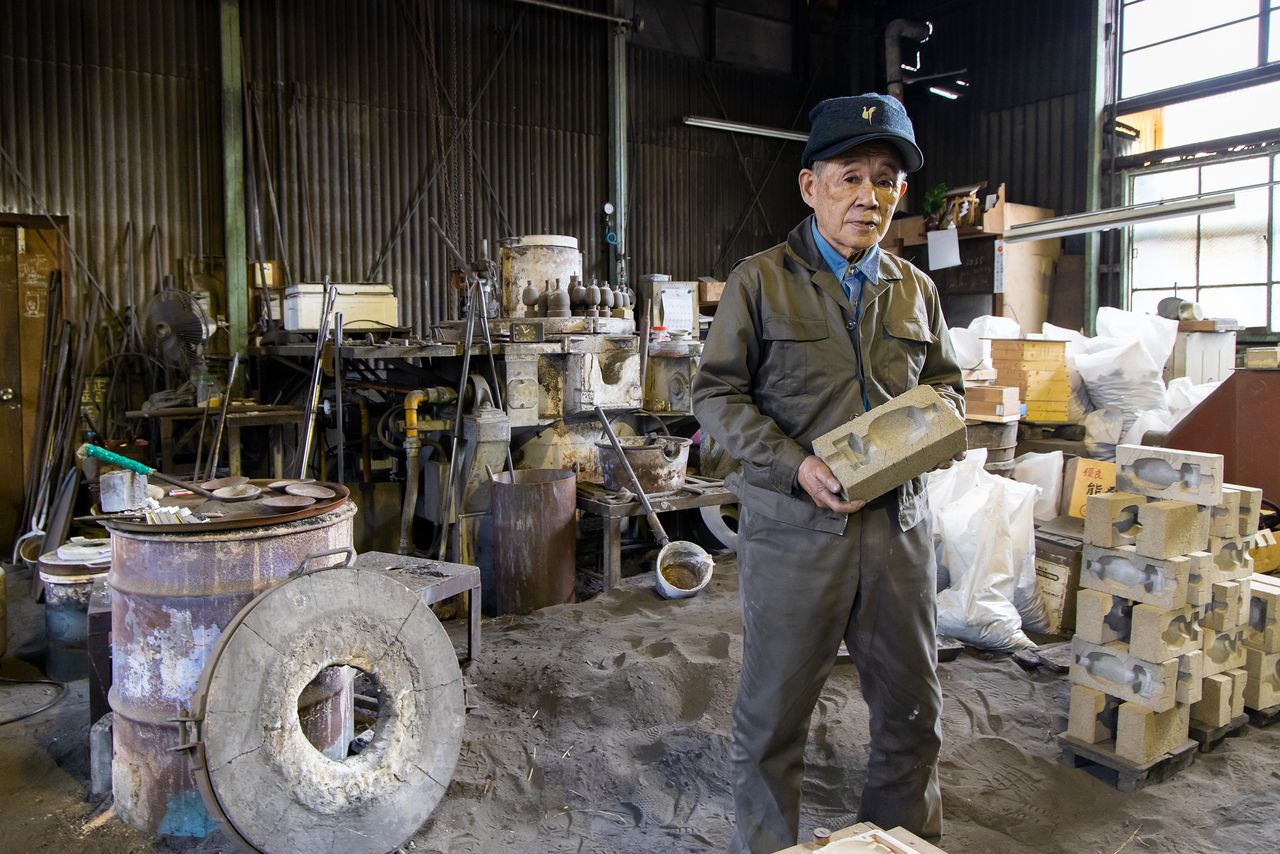 The artisan Jinpachi Sōichirō was honored with the Order of the Sacred Treasure, Silver Rays, for his contributions to the craft of metal casting. 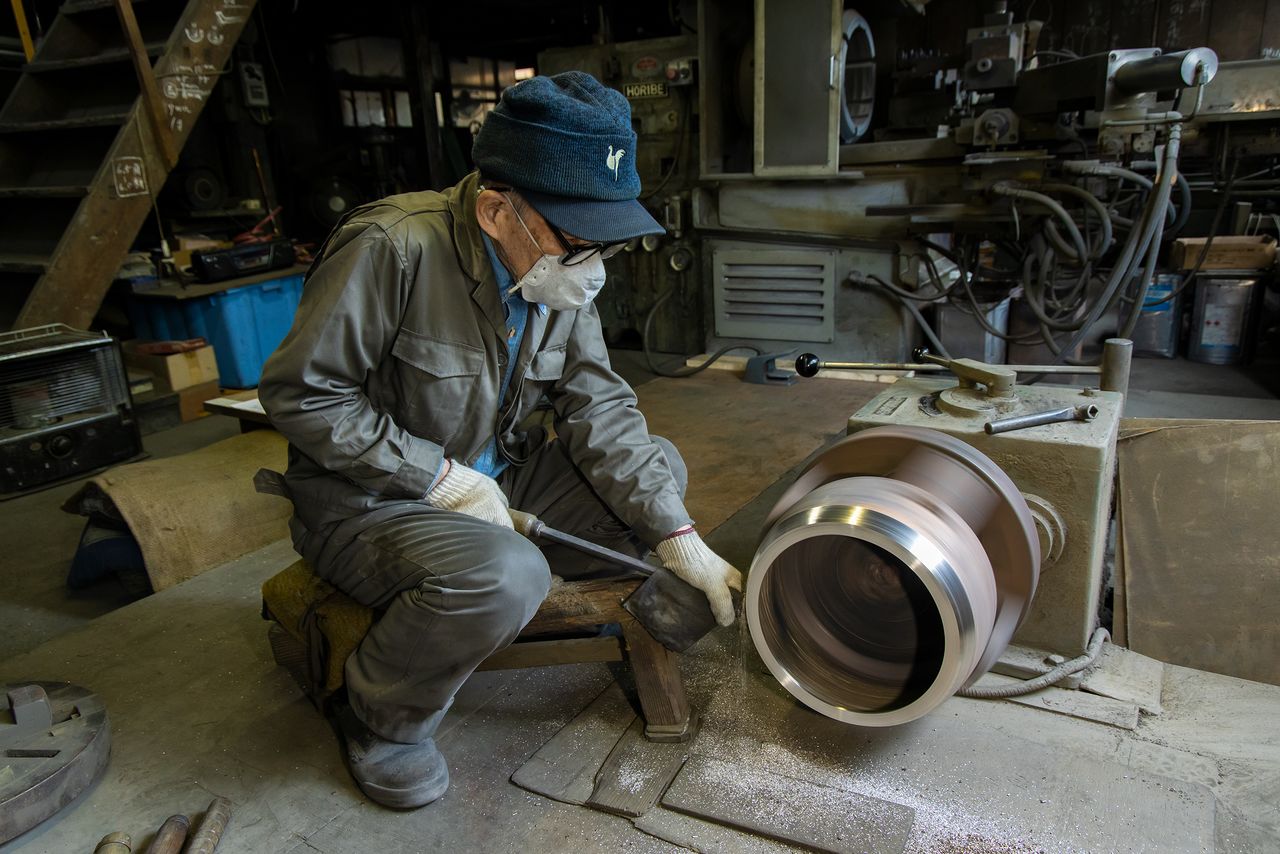 Hand-polishing a brazier used in the tea ceremony. 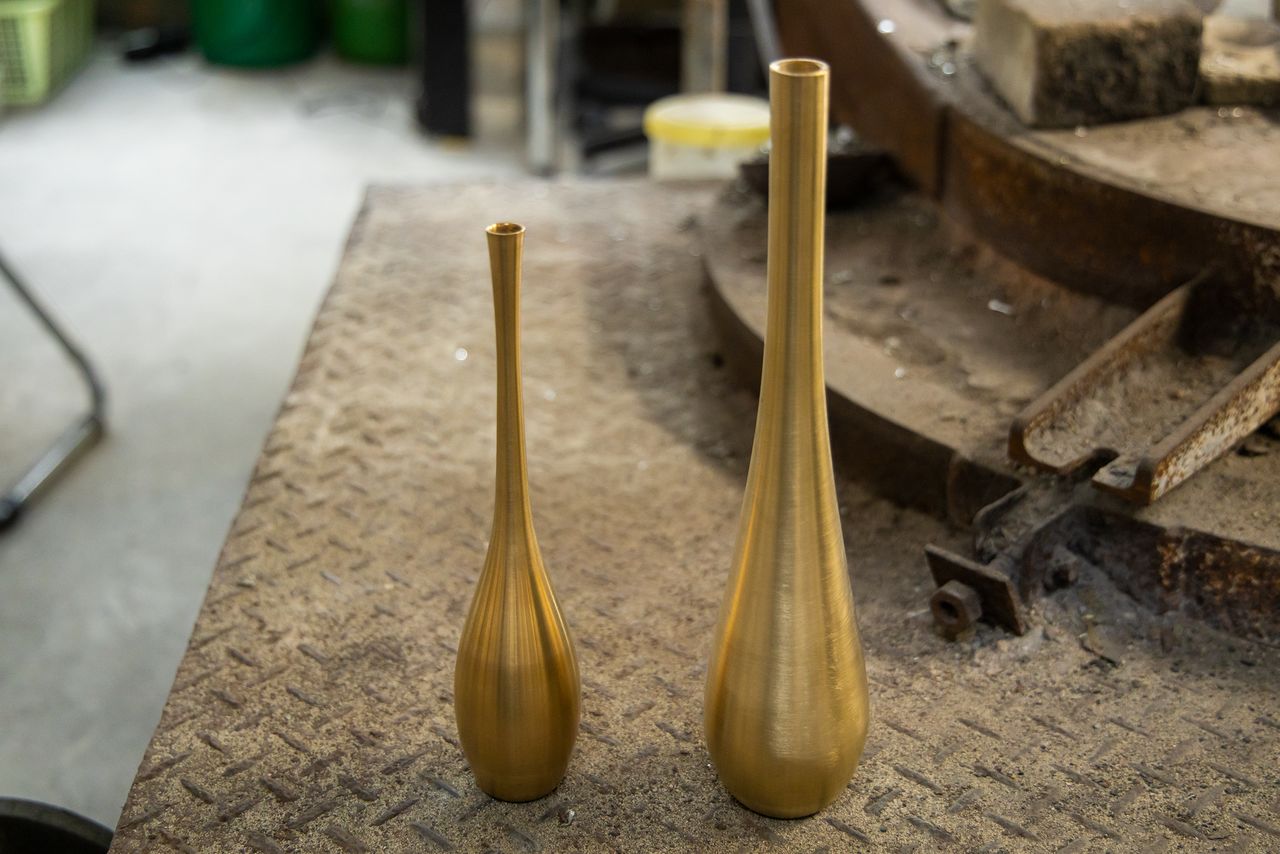 Yotsukawa Seisakusho’s modern showroom displays and sells two product lines: Kisendō, which focuses on the traditional aesthetic of Takaoka copperware, and the lifestyle brand Kisen, which offers a more modern take on the craft.

Kisen, which includes streamlined vases and wine coolers as well as items in wood and metal combos, has been selling well, but company president Yotsukawa Motomasa stresses the importance of selling both traditional products and popular modern items. The trend now is to redesign traditional crafts along more contemporary lines, but he predicts that tradition and modernity will come to be appreciated for their respective qualities. 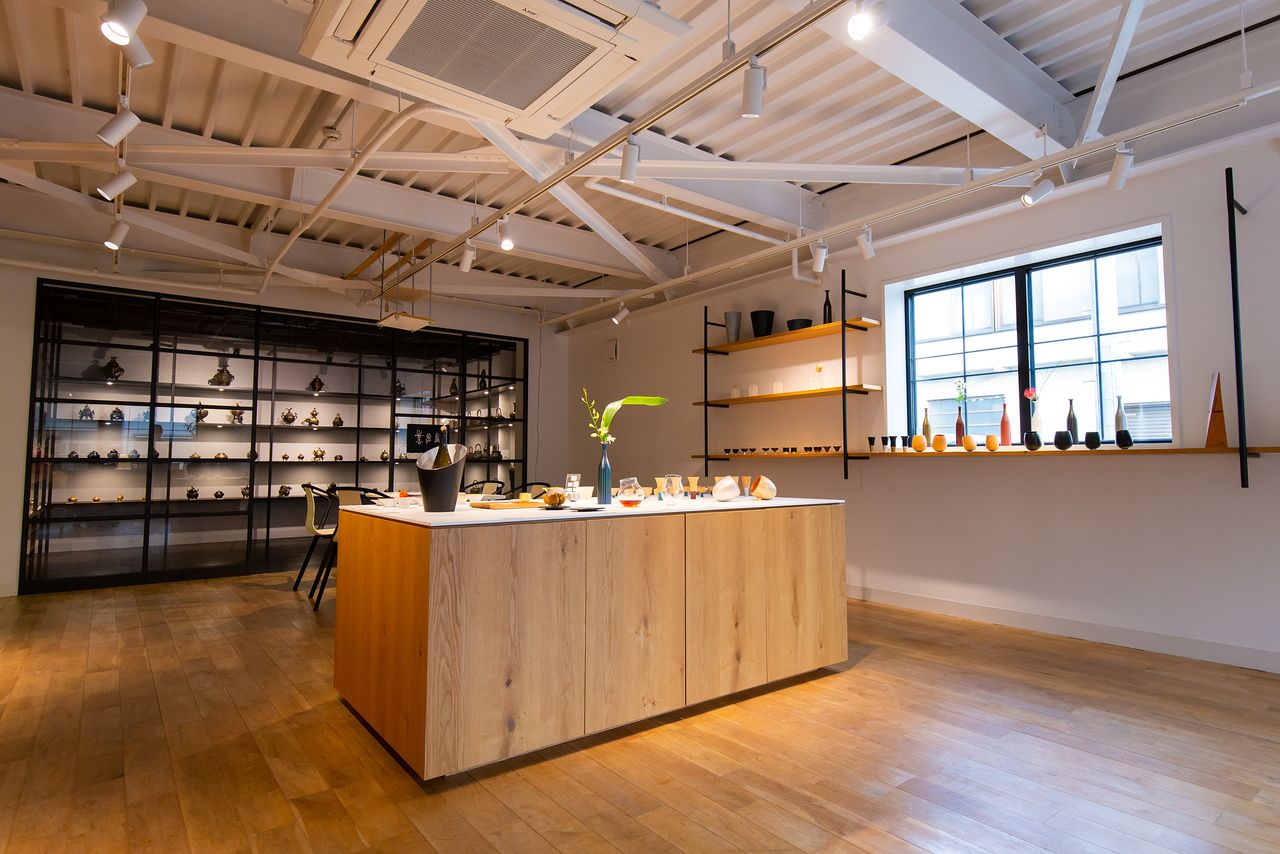 The Kisendō showroom is on the same street as the Rizaburō Metal Casting Studio. Display shelves at the rear showcase items created in the Takaoka copperware tradition. 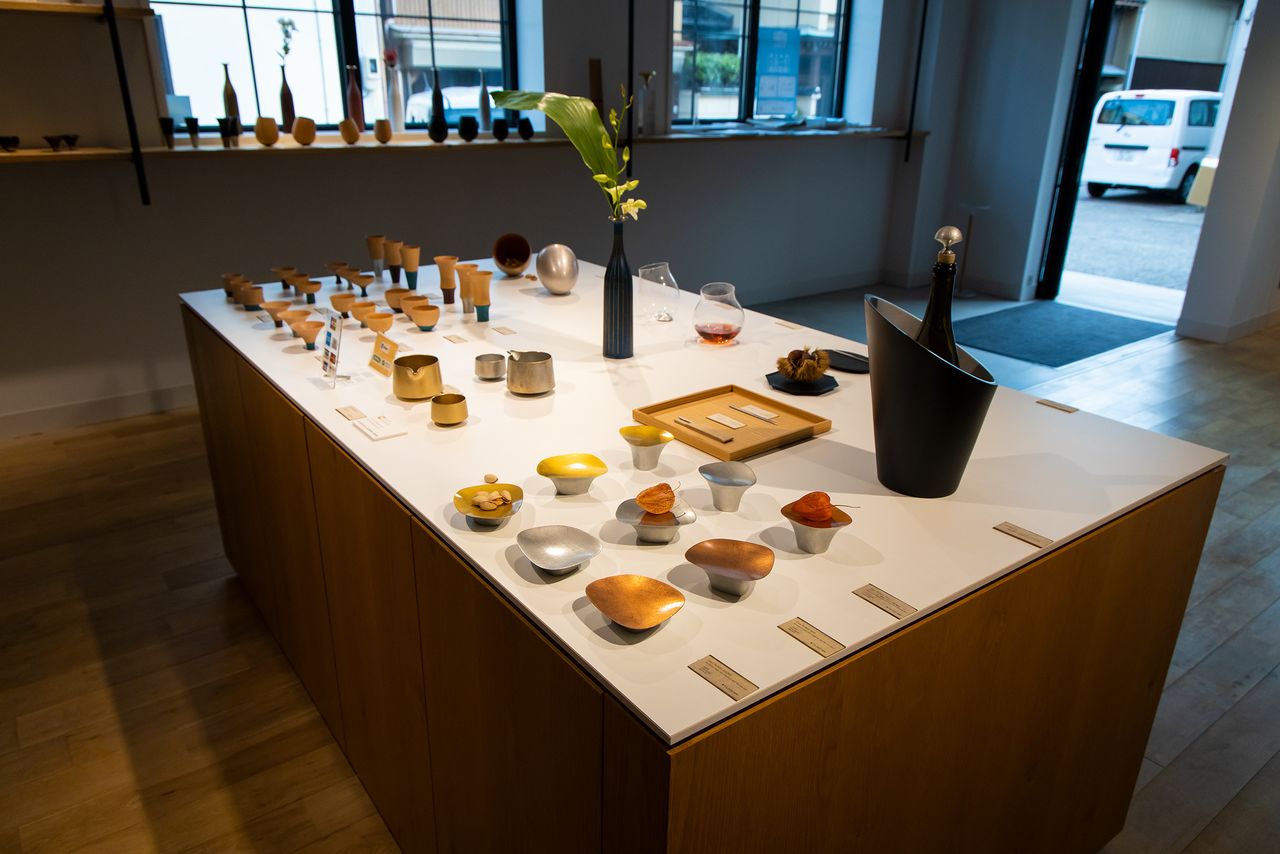 Yotsukawa adds that it’s important for manufacturers to protect artisans’ work. “Metal casting in Takaoka is a collaborative process, with different people working on the various phases of production, so having a well-balanced product mix is vital. For example, if we make only items that don’t require polishing, fewer artisans specializing in polishing will have a chance to develop their skills. That’s a problem, because when we do make something that requires polishing expertise, there’ll be no one available to do the work. Manufacturers need to think about issues like artisans’ livelihoods and motivation when they plan their product lines.”

He makes a point of going around to all the artisans to show them the finished products they worked on. In traditional craftwork, each aspect of production is handled by a different person, so quite a few artisans only work on a particular part or process and never get to see the whole product. He says that it’s also often the case that they may know the wage for their own work but not how much the product ultimately sells for. That was not a problem in the 1980s and 1990s, during the economy’s bubble years, when manufacturers received large orders from wholesalers, but nowadays when small-lot orders are more common, they need to pay heed to this issue so that artisans can stay motivated to work.

“I really believe in the potential of Takaoka metalware. The artisans here can work with copper, as well as other metals like gold, silver, and titanium. They can produce everything from statues to jewelry, and they also have highly developed coloring and shaping skills. Working with the artisans and the local community, I want to boost the visibility of the Takaoka metalware brand.”

Yotsukawa has also branched out in a different direction, opening opened Kanenosanzun, a hotel housed in a refurbished traditional home, in December 2020. He hopes visitors will stay overnight and use the copperware articles in their rooms, experiencing the attractions of Kanayamachi and Takaoka’s traditional craft as part of their stay. 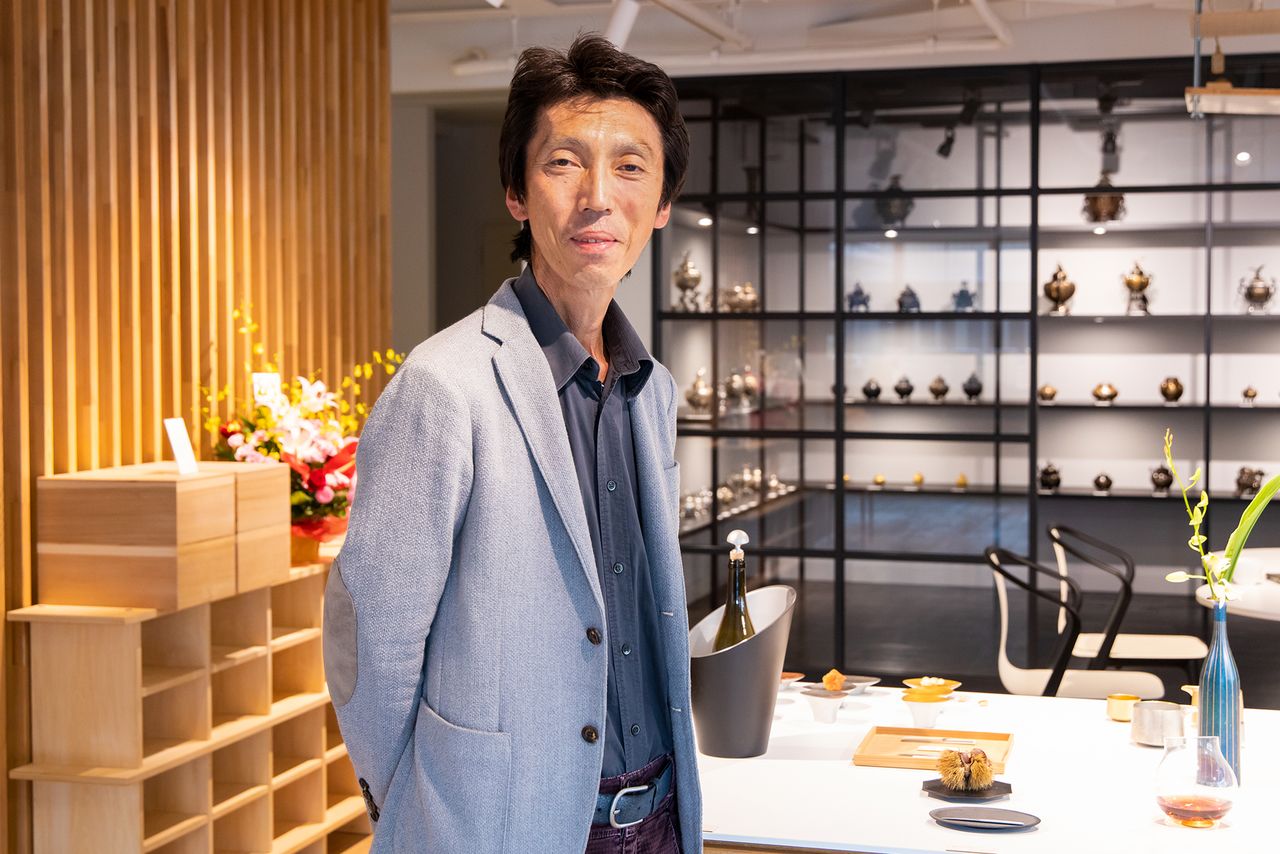 Yotsukawa says he will continue offering both traditional and modern copperware. 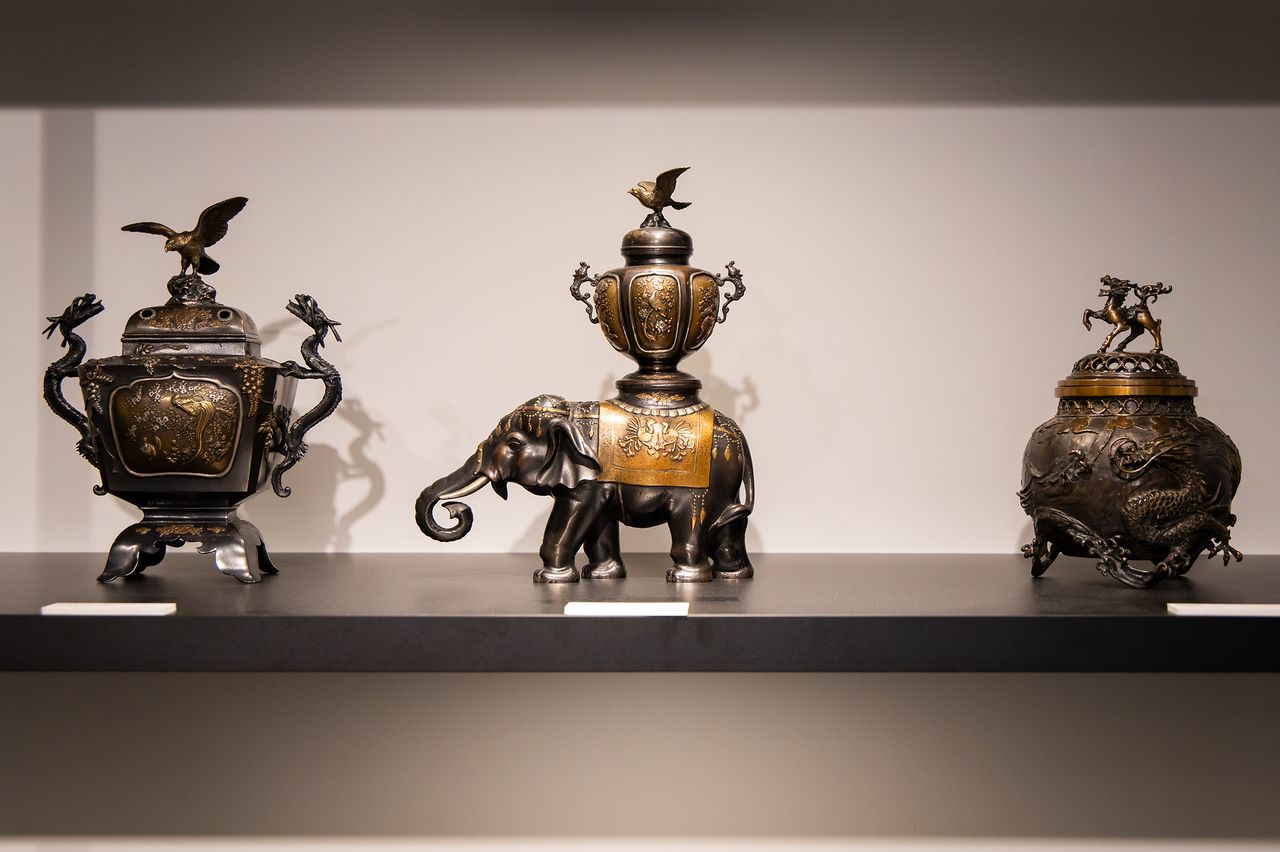 Incense burners are a signature product of Kisendō, with especially elaborate items growing in popularity in China.

(Originally published in Japanese. Reporting, text, and photos by Nippon.com. Banner photo: The gate to Daibutsuji temple announces that it is the home of the Takaoka Daibutsu.)