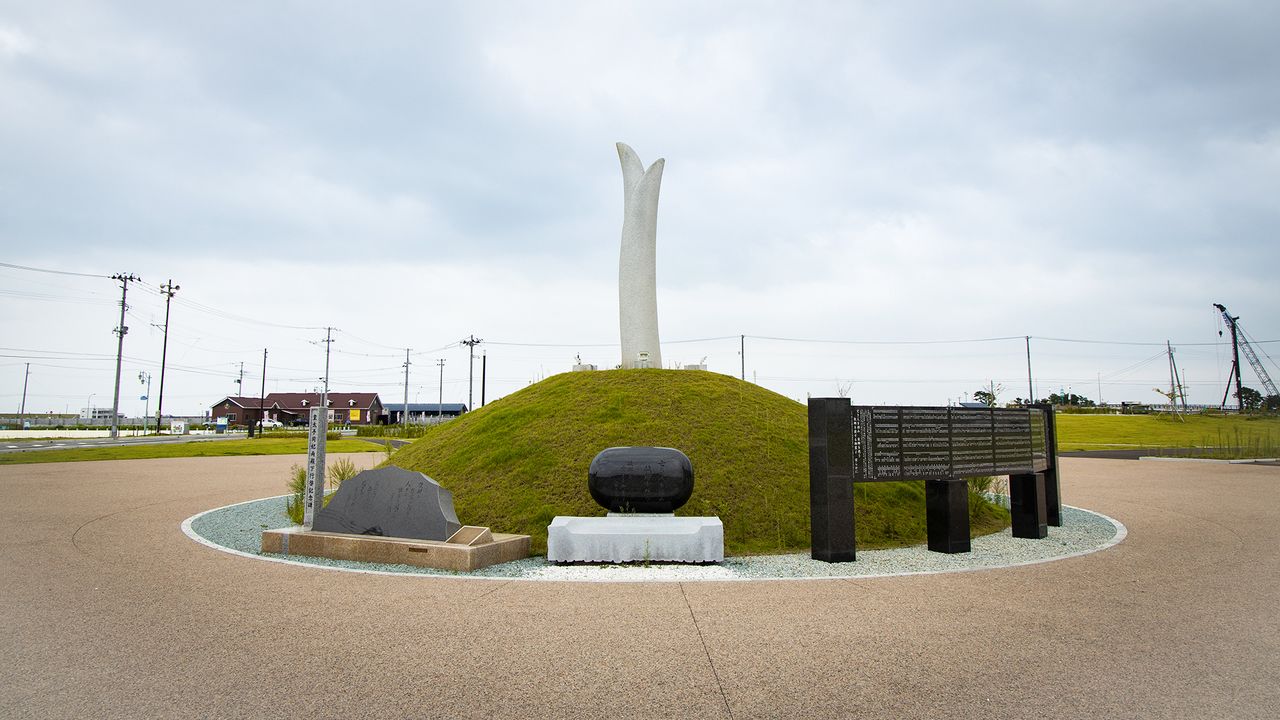 Natori: Perpetuating the Memory of 3/11

Disaster Travel Mar 11, 2021
The tsunami after the March 2011 Great East Japan Earthquake took the lives of 965 residents of Natori, Miyagi Prefecture. The city’s Yuriage district was especially hard hit; now, a decade later, a remembrance hall and memorial park here look back on the disaster and remind the public of the importance of preparing for calamity. A commercial center offering local specialties is also up and running, reintroducing vitality to the area.

A Lively Gathering Spot in Yuriage

The tsunami of March 11, 2011, devastated a swath of towns and villages along the Pacific Ocean coast of the northeastern Japan region of Tōhoku. Many people will no doubt recall the sight of Sendai International Airport’s runway engulfed by the waves. The airport itself is located in Natori, and the whole area, which lies on a flat coastal plain, was almost completely wiped out.

Yuriage, in the northeastern part of the city of Natori, suffered especially heavy damage. Near rich fishing grounds and situated along the Natori River south of Sendai, the region’s major city, Yuriage had long been a thriving port community. Known for its kamaboko steamed fish cake and other processed seafood products, Yuriage was built around a fishing port on an inlet at the mouth of the river. The tsunami, racing upstream, destroyed the levees and laid waste to homes, factories, and warehouses. Some 80% of Natori’s fatalities were people who lived or worked in Yuriage.

Reconstruction to strengthen seawalls and raise the land higher above sea level began soon afterward. The Yuriage Port morning market resumed in 2013, and a new industrial park for seafood processing businesses opened in 2016. New schools and housing were also built, and the new Yuriage district opened with great fanfare in May 2019. 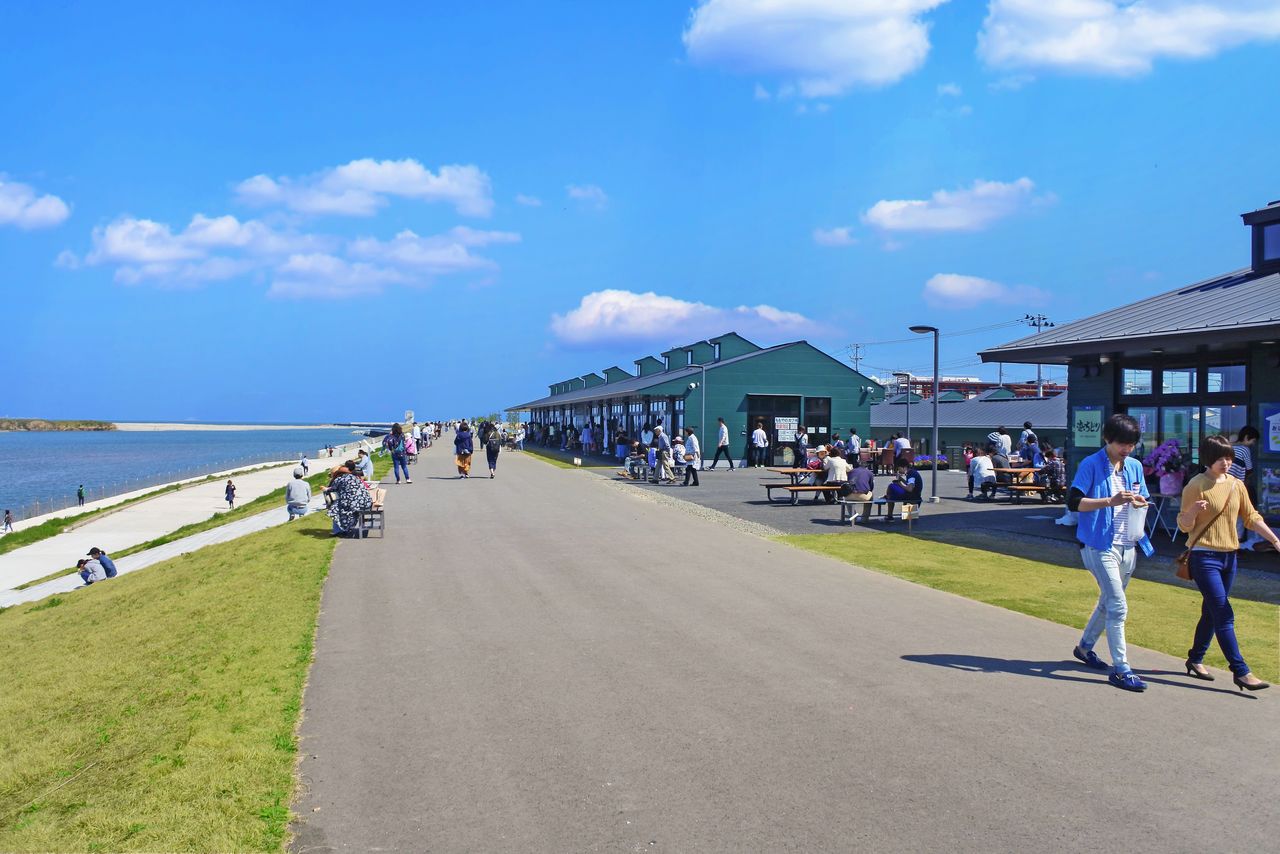 Kawamachi Terrace Yuriage, built along a levee near the Yuriage Ōhashi, a bridge spanning the Natori River, is a popular facility consisting of 26 shops and restaurants that feature local products. The restaurants serve akagai, a species of Ark clam (Anadara broughtonii), shirasu whitebait, and other seafood dishes, while the shops sell processed seafood products, locally grown vegetables, and confections. Cafés serving French toast, chiffon cake, and other sweets are popular too. Open-air seating is provided on the river side of the complex, and a wide walkway and grassy areas invite customers to take a leisurely stroll after enjoying a meal or snack. 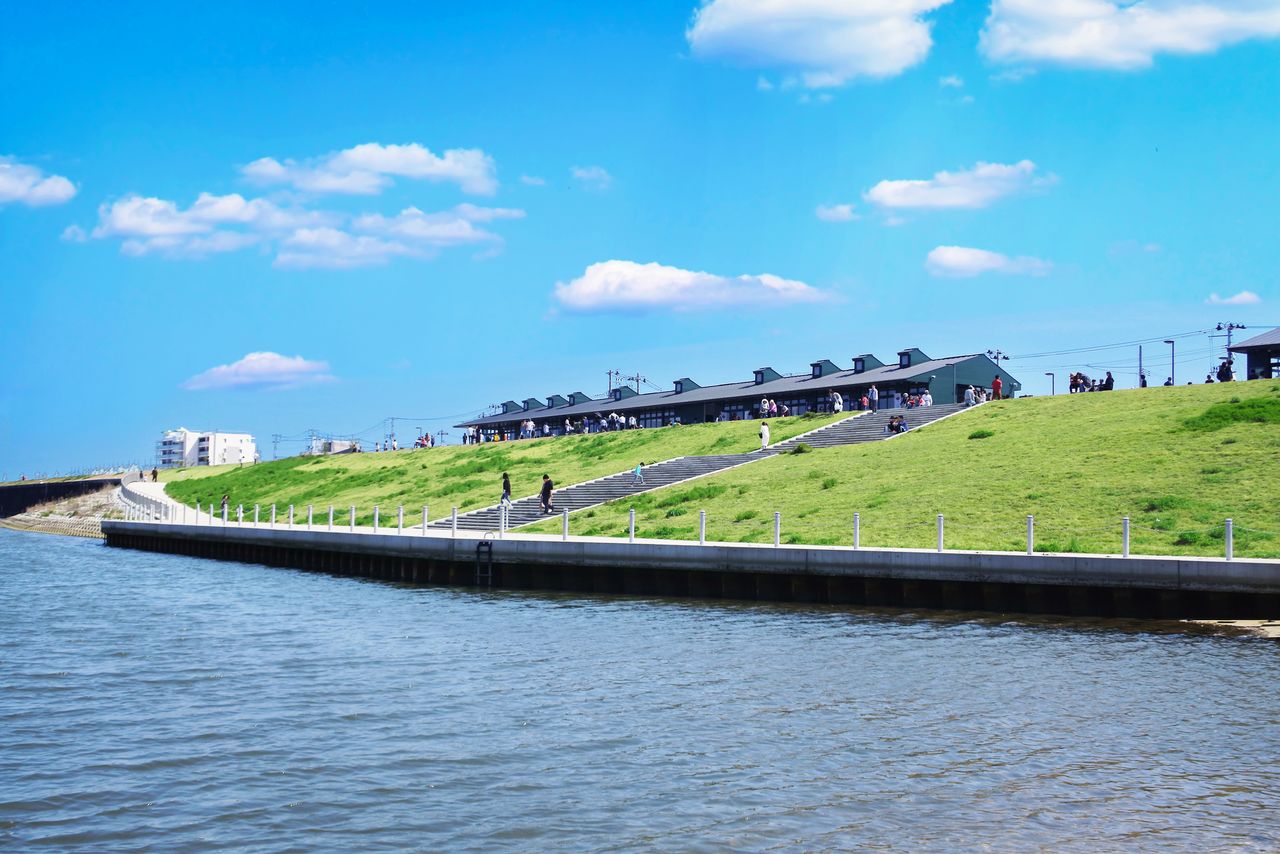 Some of the shops destroyed in the tsunami have opened up again at Kawamachi Terrace Yuriage. The restaurant Momoya, whose original owners perished in the tsunami, is one of them.

Katsudon, a pork cutlet and egg on rice dish, was the featured menu item at Momoya and a favorite of the district’s residents. The restaurant and everything in it were washed away, but a local chef, not wanting to see this local specialty lost, tried out a re-created recipe on the restaurant’s regular customers and the late proprietors’ relatives and, after much trial and error, succeeded in resurrecting their favorite dish. The new restaurant, using the original Momoya name, now serves Momoya’s famous katsudon at Kawamachi Terrace Yuriage. Its distinctive flavor comes from the sweet-tart sauce made from mackerel flake-based broth in which the cutlet is briefly simmered, and it is faithfully reproduced, right down to the number of green peas used for garnish and the taste of the accompanying pickles. 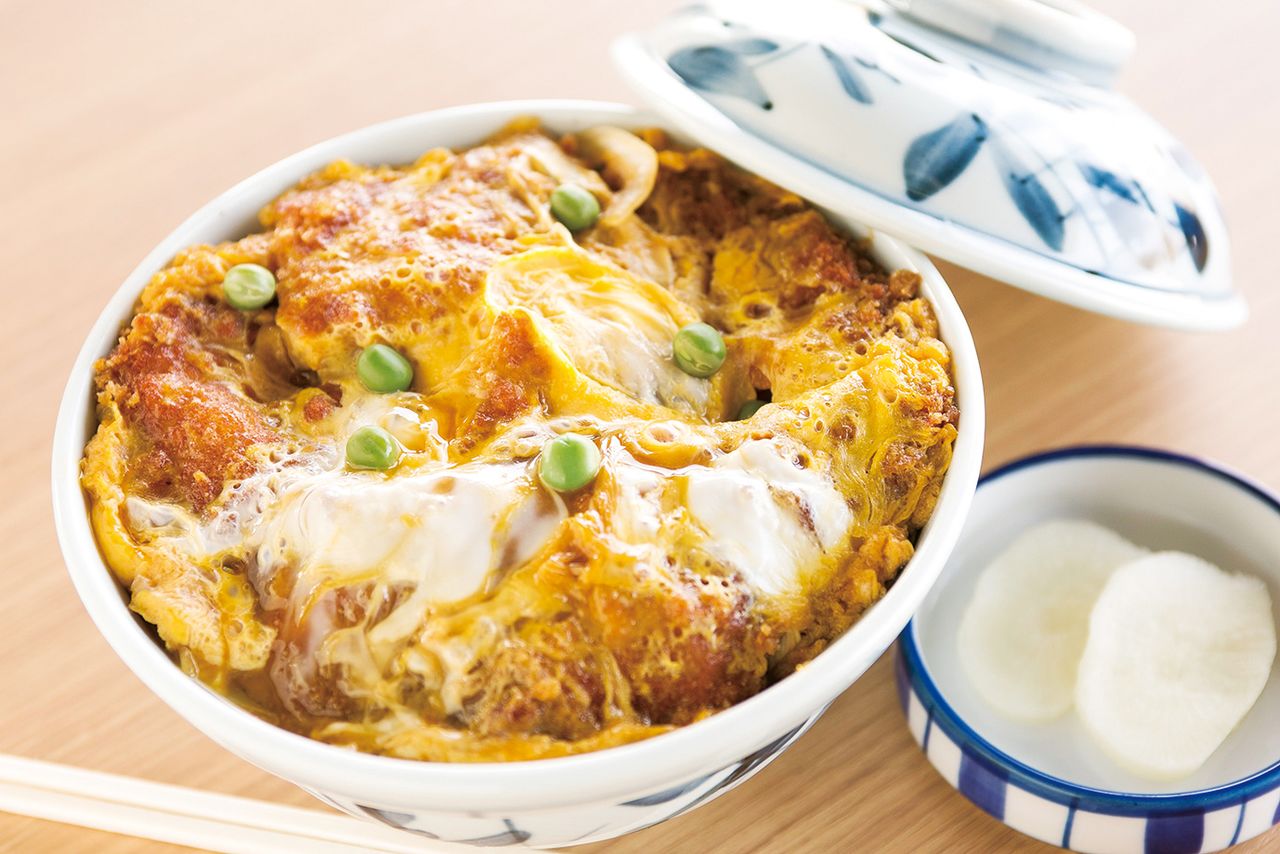 Other establishments destroyed in the tsunami—Ryōtei Hamaya, a restaurant famous for its fresh seafood rice bowl, and kamaboko makers Sasakei and Sasanao—have also reopened at Kawamachi Terrace Yuriage. The facility is not just a draw for tourists but a place where local residents can once again savor hometown flavors. 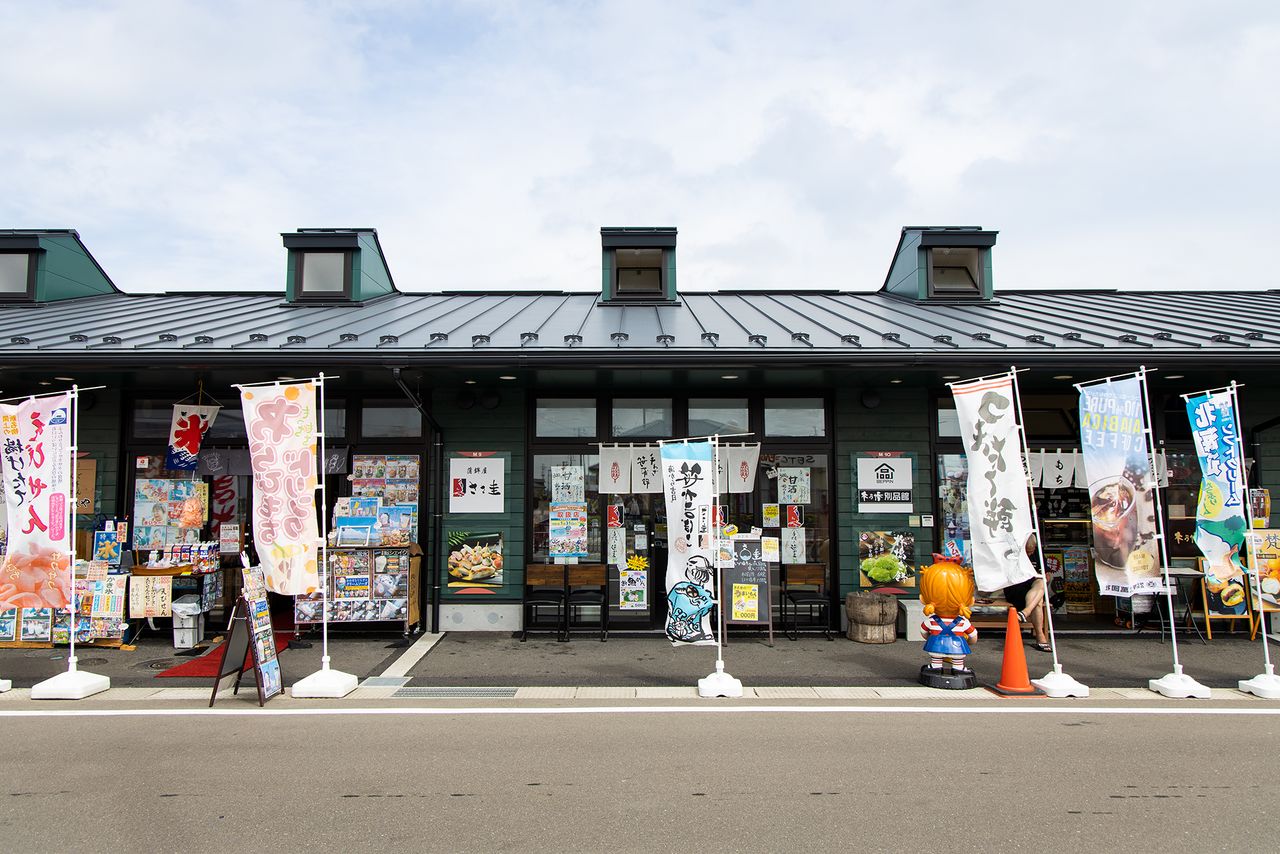 Yuriage, a fishing port district slowly getting back on its feet, is also a place where tsunami victims are remembered. At the Remembrance Hall, the ravages of the March 11 disaster are recorded for posterity, carrying forward lessons on the importance of preparing for and mitigating future disasters.

The Natori City Earthquake Reconstruction Hall, a 7-minute walk from Kawamachi Terrace Yuriage along the Natori River toward the sea, opened in May 2020. The facility includes a display area for materials relating to the Great East Japan Earthquake and a space for holding disaster management seminars and hands-on demonstrations. The diorama in the community meeting space visible from the entrance recreates Yuriage as it looked before March 11. A wall map details present-day Natori, making it easy to see the changes that have taken place since then. 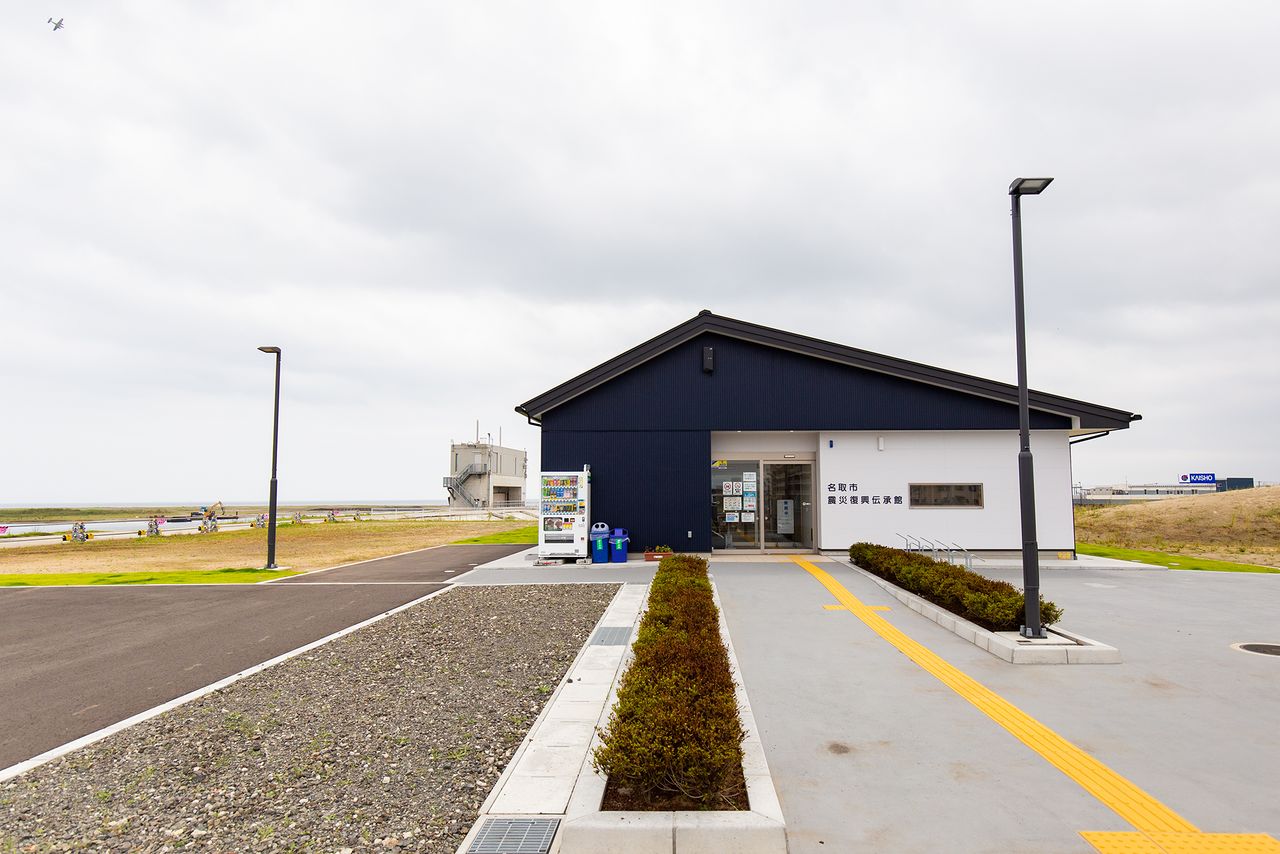 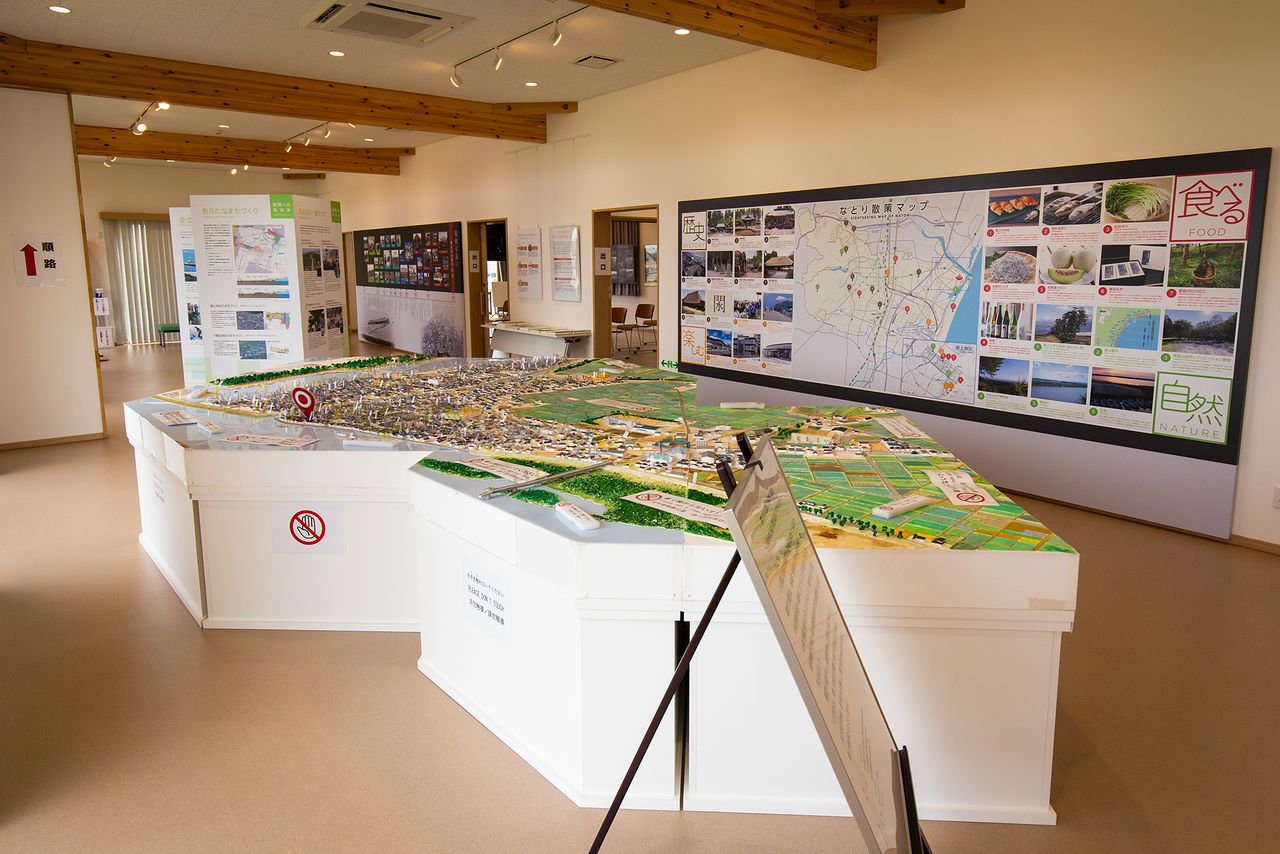 The facility features a diorama of Yuriage as it was before the disaster, created by students from Kobe University, the National Institute of Technology, Sendai College, and other schools. 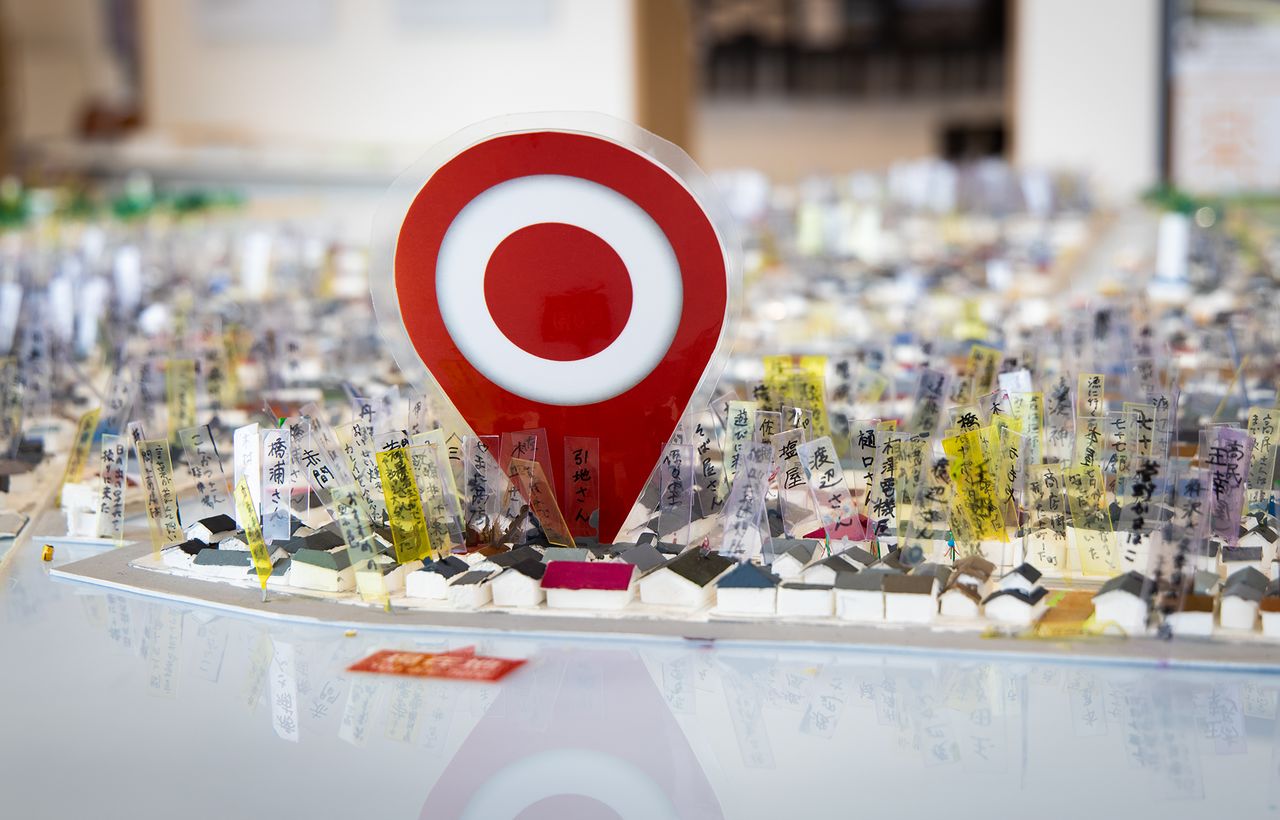 The diorama shows structures lost in the tsunami, identified by their owners’ names, and local landmarks. Near the arrow indicating the Reconstruction Hall are the former locations of Sasakei and Momoya.

The exhibit space consists of panels with photos and data on the area’s reconstruction, as well as modules allowing visitors to experience the tsunami menace. One ingenious display demonstrates the difficulty of opening a door against water pressure. It takes quite a lot of strength to force the door open, an experience that reinforces the importance of evacuating promptly.

In the screening room, there are photos of the damage caused in Natori by the tsunami, and a video on disaster preparation plays on a nearby screen. The video depicts the tense situation during the disaster and the hardships experienced by evacuees in the shelters where they took refuge, a reminder of the importance of preparing for whatever disaster might strike. 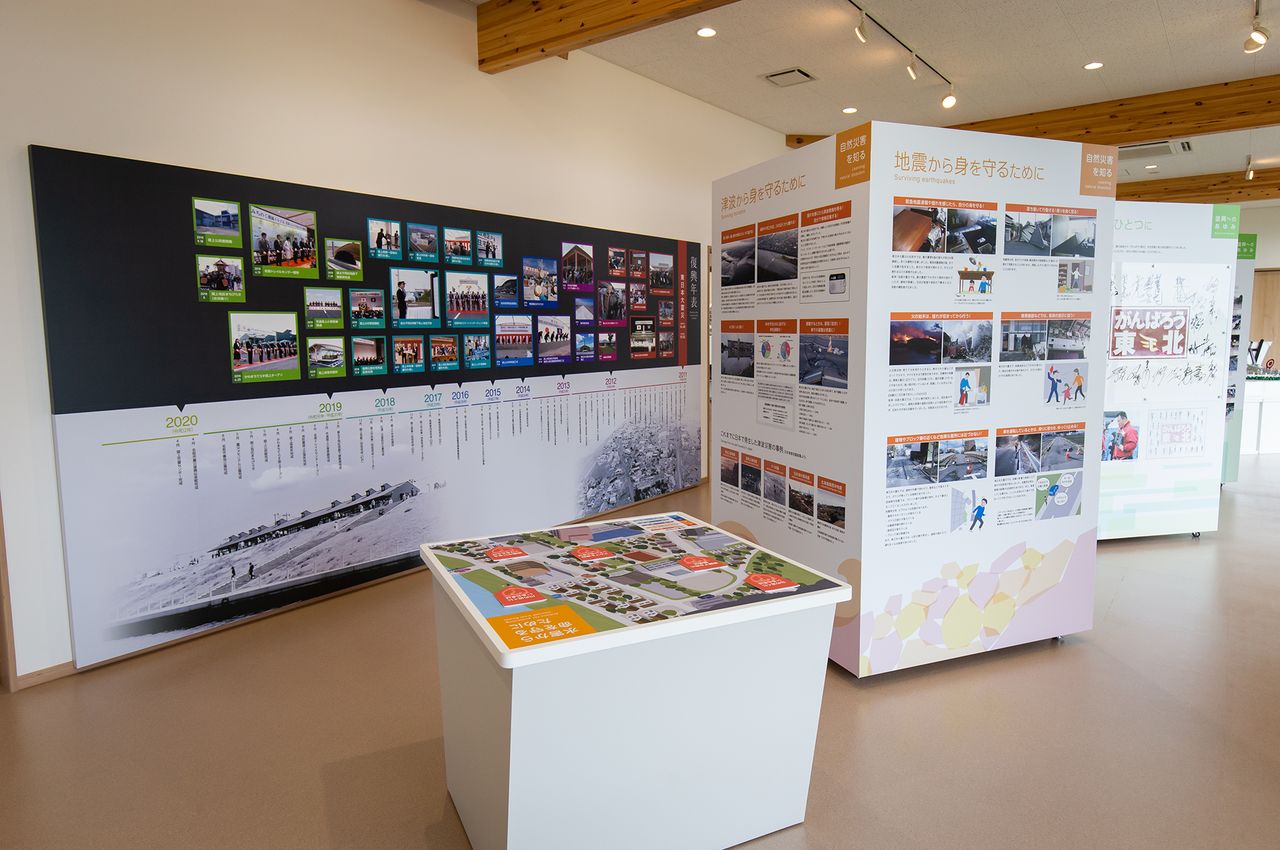 Displays detail reconstruction work and the importance of disaster preparations. 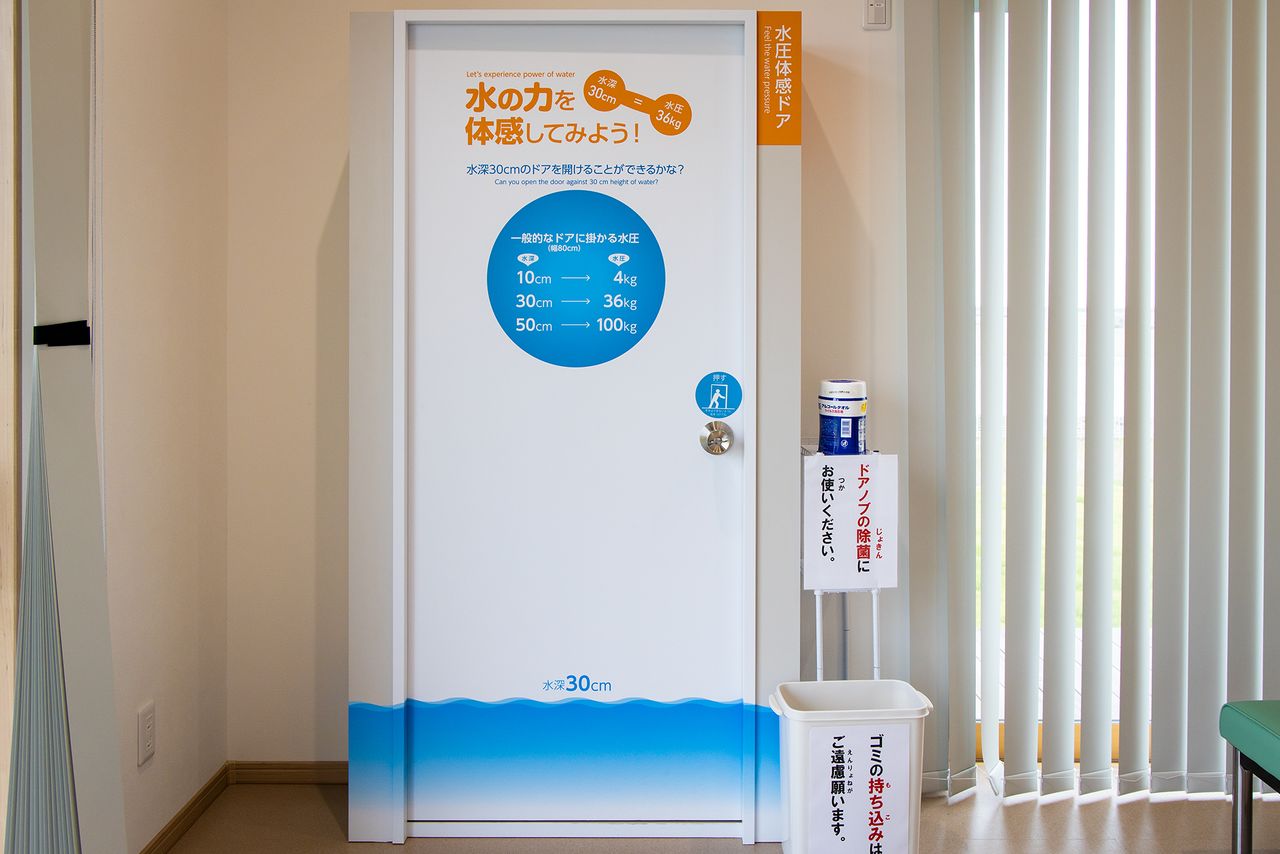 This exhibit allows visitors to experience the difficulty of opening a door when flooding has occurred. Water just 30 centimeters deep pushes against the outside of the door with some 36 kilograms of weight. 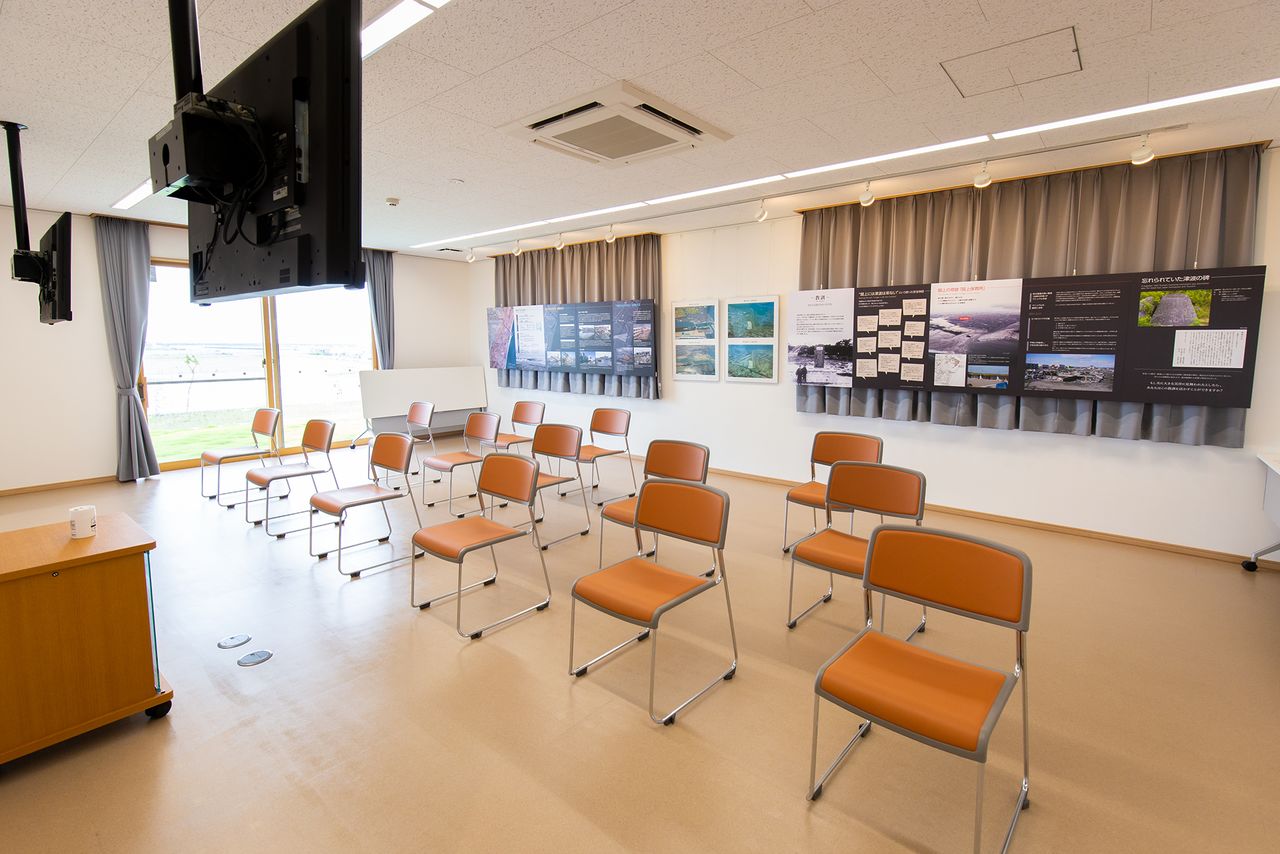 A video in the screening room replays the tense situation during the disaster and emphasizes the importance of evacuating.

The Natori City Earthquake Reconstruction Hall’s website carries information on citizen group workshops on disaster preparation and mitigation, guided tours of the affected areas, and other activities. Kataribe sessions—citizens retelling their experiences during and after the disaster—also take place here, and visitors who hear the talks say that they come away with greater awareness of the importance of preparing for disasters. Many of the tours and talks require prior reservations, so be sure to check the website before visiting. 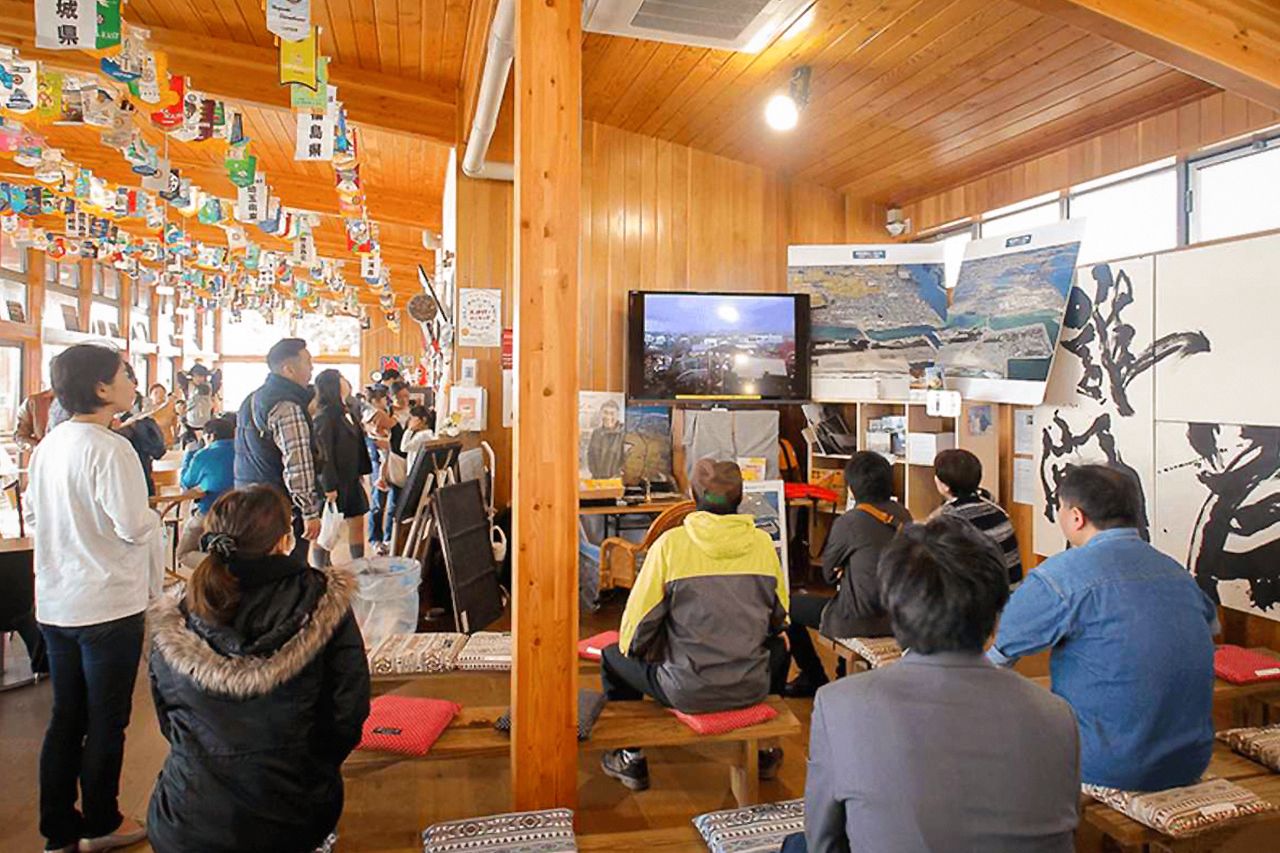 Visitors to the Yuriage Port morning market, held on Sundays and public holidays, attend a talk on the disaster. (Courtesy the Natori City Earthquake Reconstruction Hall)

Just a 10-minute walk from the Remembrance Hall is the Natori City Earthquake Memorial Park, which includes the Yuriage landmark of Hiyoriyama, a hillock 6.3 meters above sea level. The park consists of five areas, including a Remembrance Zone with a cenotaph and a hall displaying remnants of the disaster. Timed to coincide with the formal reopening of Yuriage, it opened in May 2019.

The cenotaph that is the centerpiece of the Remembrance Zone is a figurative representation of the souls of the victims ascending to heaven and of residents’ determination to rebuild their hometown. Standing 8.4 meters tall, it is the exact height of the tsunami that ravaged the area. The memorial plaque carries the names of many of the dead and speaks of the terror of the disaster and the importance of disaster management. 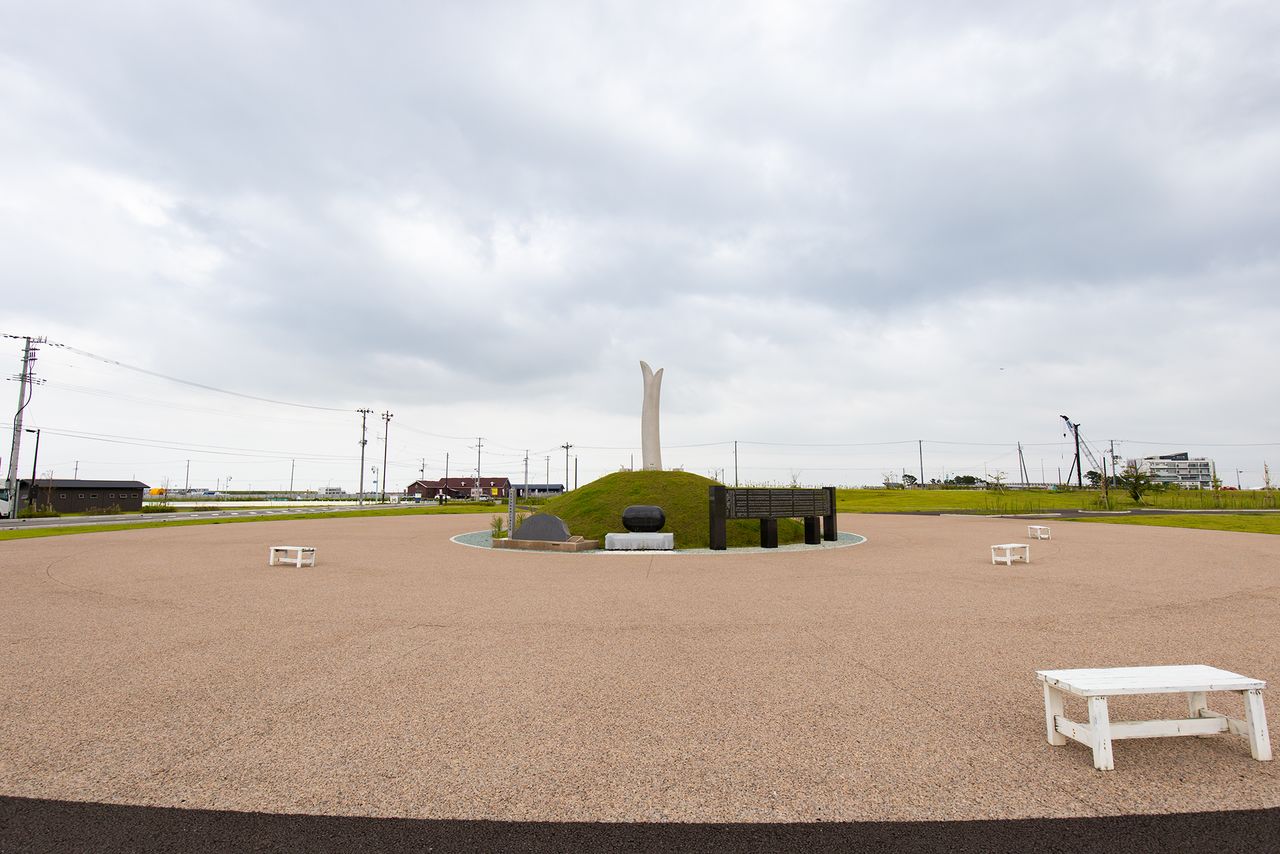 The Remembrance Zone includes a cenotaph, a monument inscribed with a poem, and a memorial plaque.

Atop Hiyoriyama stands Tominushihime, a reconstructed Shintō shrine. A subsidiary to the nearby Yuriage Minato shrine, it was built, fittingly enough for a fishing port, to pray for safety at sea, abundant fish catches, and success in business. Engulfed by the tsunami, Tominushihime’s main hall was washed away and rebuilt in 2013. It overlooks the Memorial Park and today has the additional role of consoling the souls of the departed. The entrance to the shrine is guarded once again by a pair of komainu, which were carried away in the tsunami but miraculously recovered by local residents.

Remnants from the disaster preserved in the park’s Relics and Retelling Zone include a damaged pedestrian bridge and streetlights, testament to the ever-present threat of disasters. Among the various memorial parks and remembrance halls commemorating the Great East Japan Earthquake in the region, access to the Memorial Park at Natori, which neighbors Sendai, is relatively good. Visitors are very welcome, especially since they can enjoy delectable local dishes at nearby Kawamachi Terrace Yuriage. 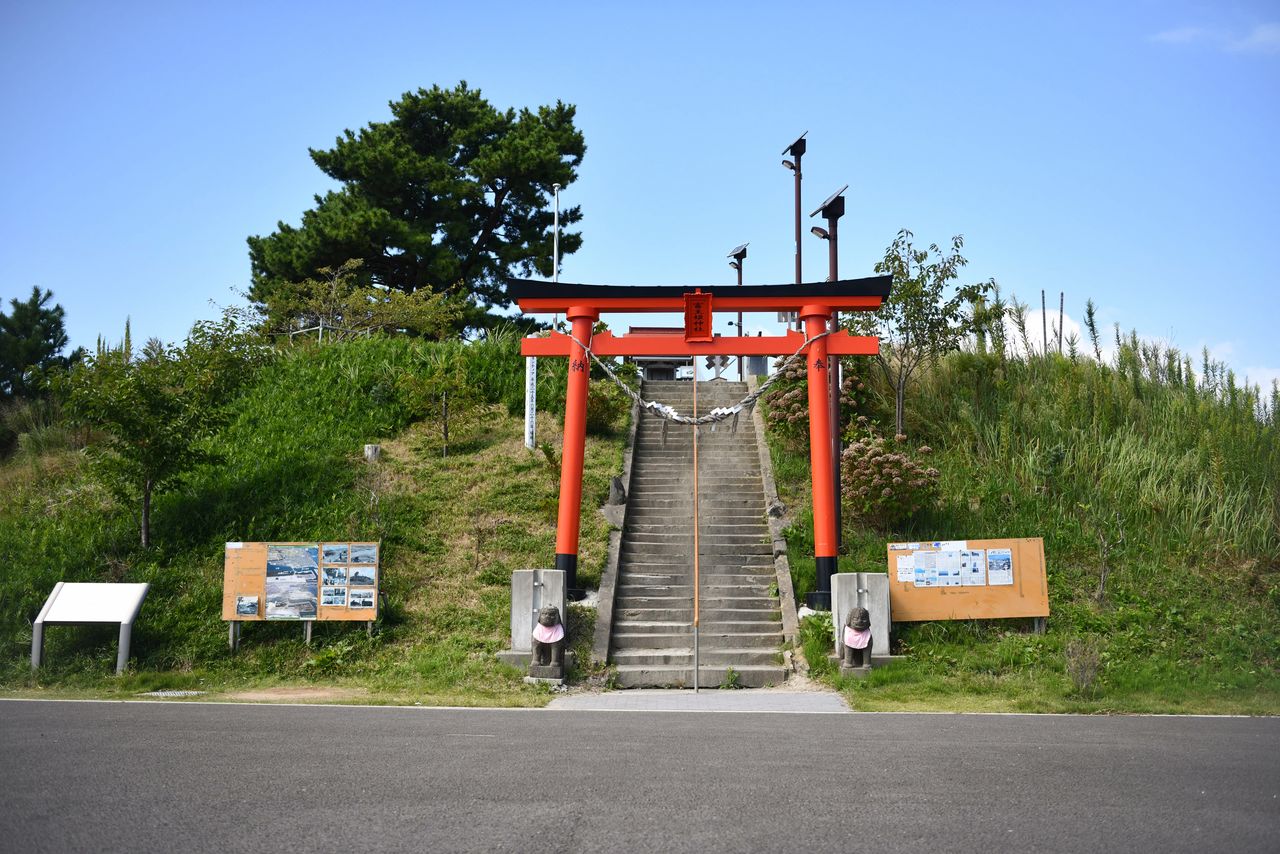 A pair of komainu dogs that survived the tsunami once again guard the shrine at Hiyoriyama. (Courtesy Natori municipal government)

(Translated from Japanese. Reporting and text by Shoepress. All photos by Nippon.com, unless otherwise noted. Banner photo: Cenotaph at the Natori City Earthquake Memorial Park.)