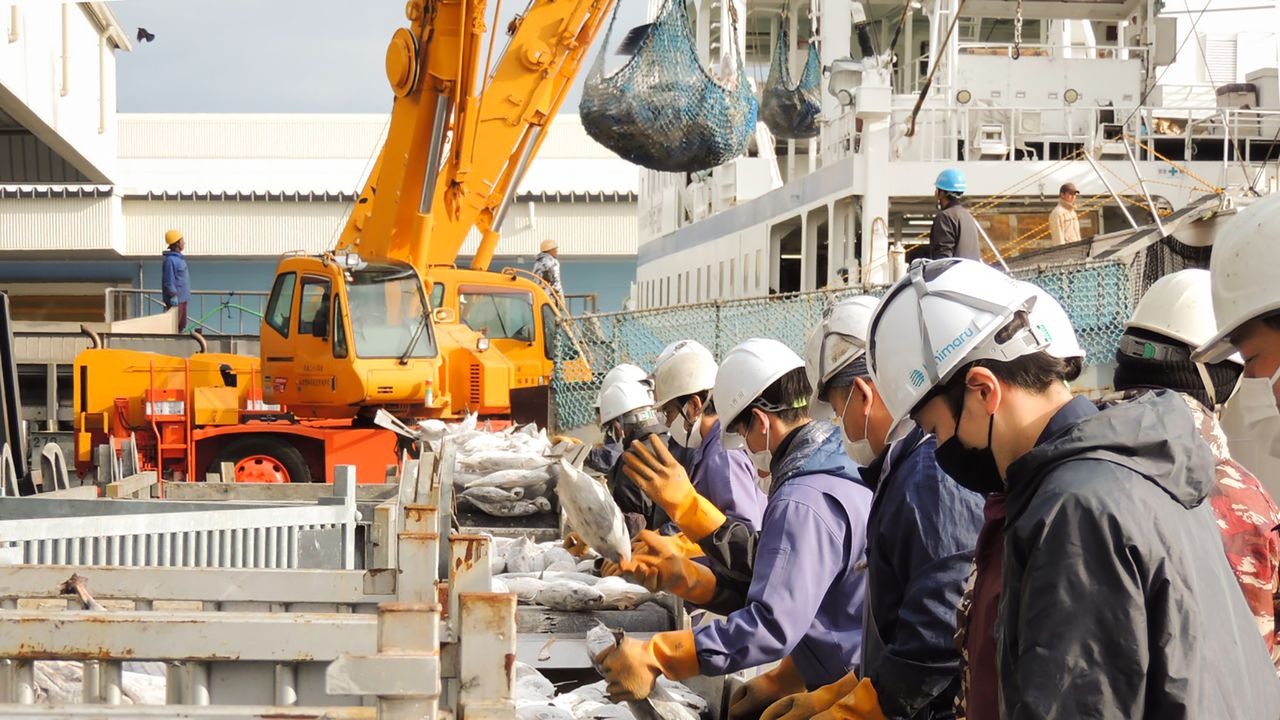 Food and Drink Apr 30, 2021
The ports of Yaizu and Ogawa in Shizuoka Prefecture are known for the large variety of fish, including tuna and mackerel, they handle. The surrounding area is home to numerous businesses manufacturing and selling traditional products like himono (dried fish) and katsuobushi as well as restaurants serving fresh seafood and shops offering all manner of gift items.

Yaizu Port in Shizuoka Prefecture boasts Japan’s largest annual fish haul by value, a title it has held for four years running. In 2020, ¥41 billion worth of fish and other seafood passed through the facility. Mainly a deep-sea fishing port, it handles great volumes of bonito along with one-third of all tuna landed in Japan, which also makes it one of the country’s leading anchorages by catch volume. 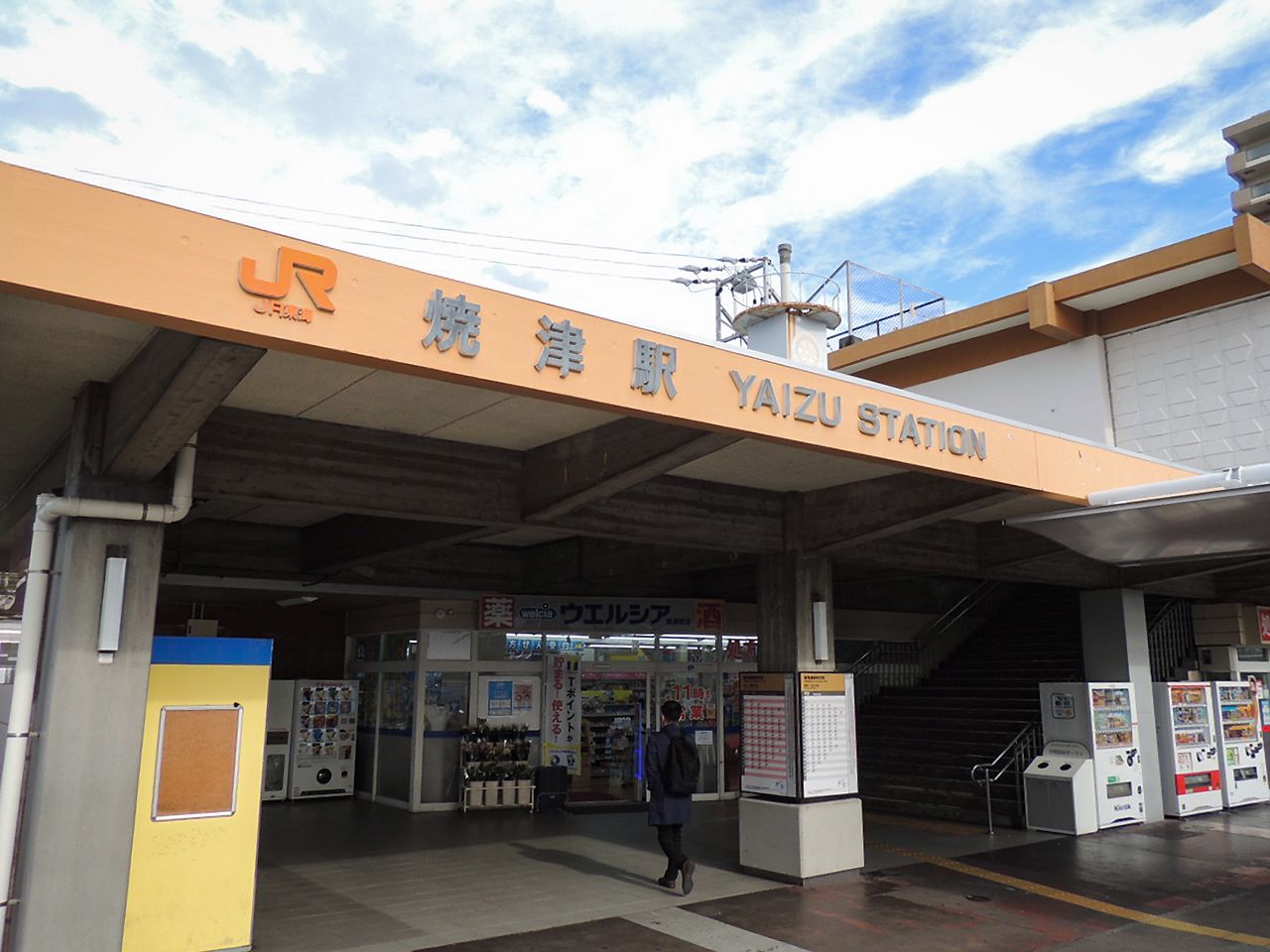 Yaizu Station on the JR Tōkaidō Line is the gateway to the port, which is a 15-minute walk away. From the station, visitors can also ride the Shizutetsu Bus to nearby Ogawa Port, a 12-minute journey. 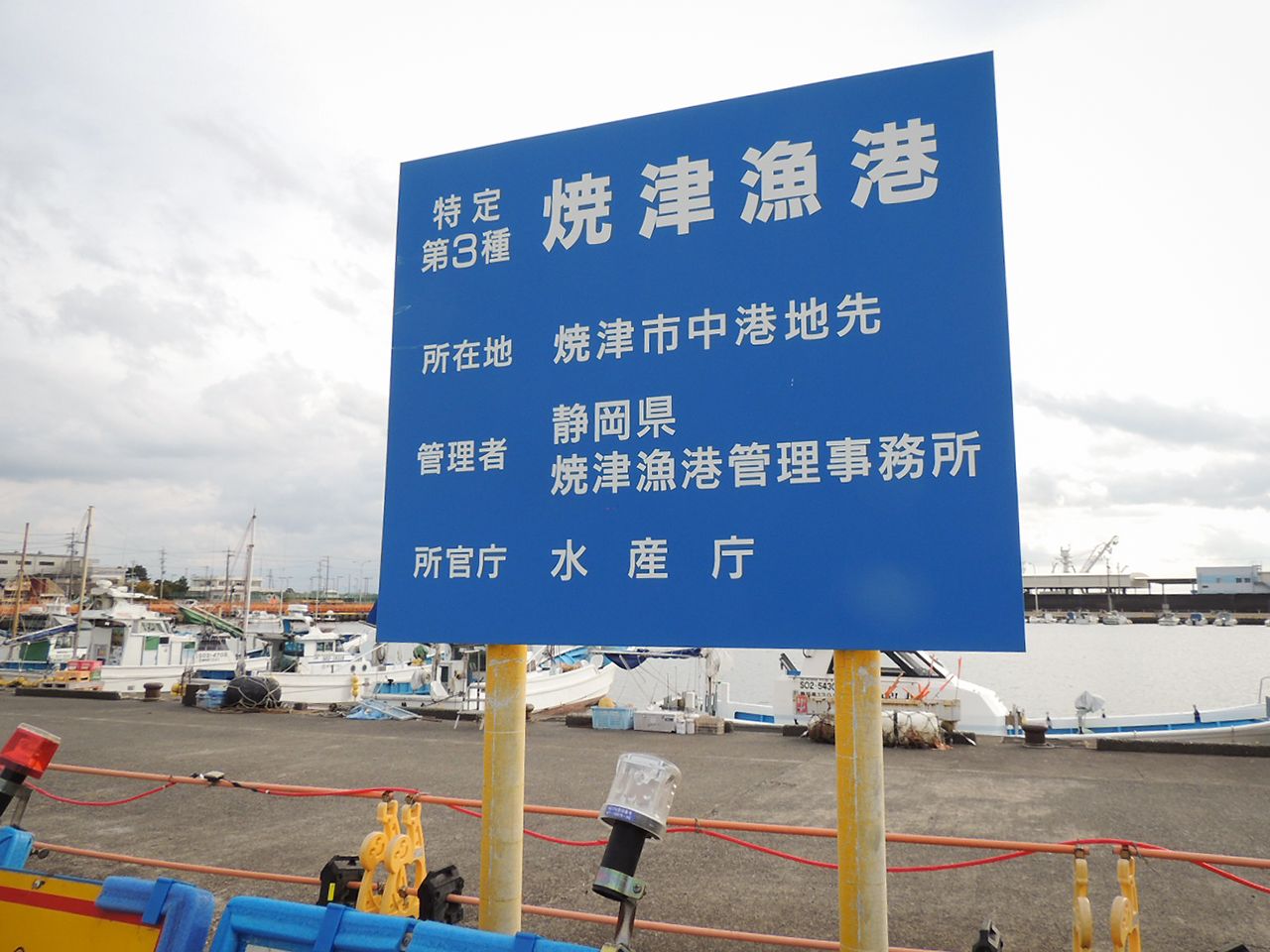 Yaizu Port is one of only 13 anchorages in Japan designated as a Class 3 fishing port, meaning it is used by fishing vessels from around the country.

At Ogawa Port, the Name of the Game Is Mackerel

Yaizu Port consists of two districts: Yaizu, the base mainly for deep-sea fishing, and Ogawa, whose boats fish in coastal waters. Catches landed at Ogawa Port, a smaller facility at the southern end, include such varieties as aji (horse mackerel), sardines, cutlassfish, mahi-mahi, and kinmedai (splendid alfonsino). However, the main catch at Ogawa is mackerel, which are transferred from fishing boats in an endless stream by a conveyor belt-like contraption to waiting port workers who sort and pack the fish by size. Some of the catch is shipped to Tokyo and other urban markets, but much of it remains to be processed locally. 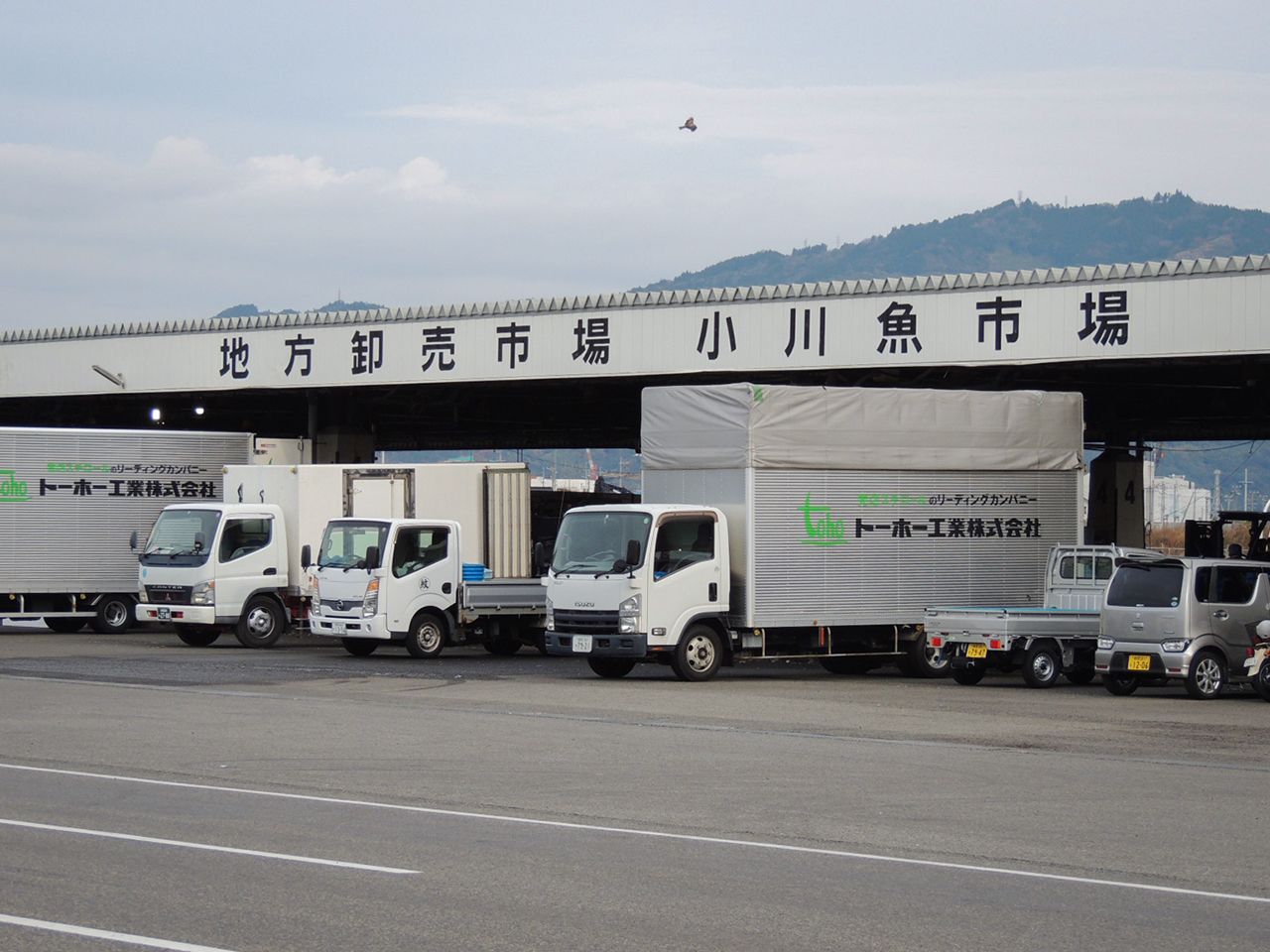 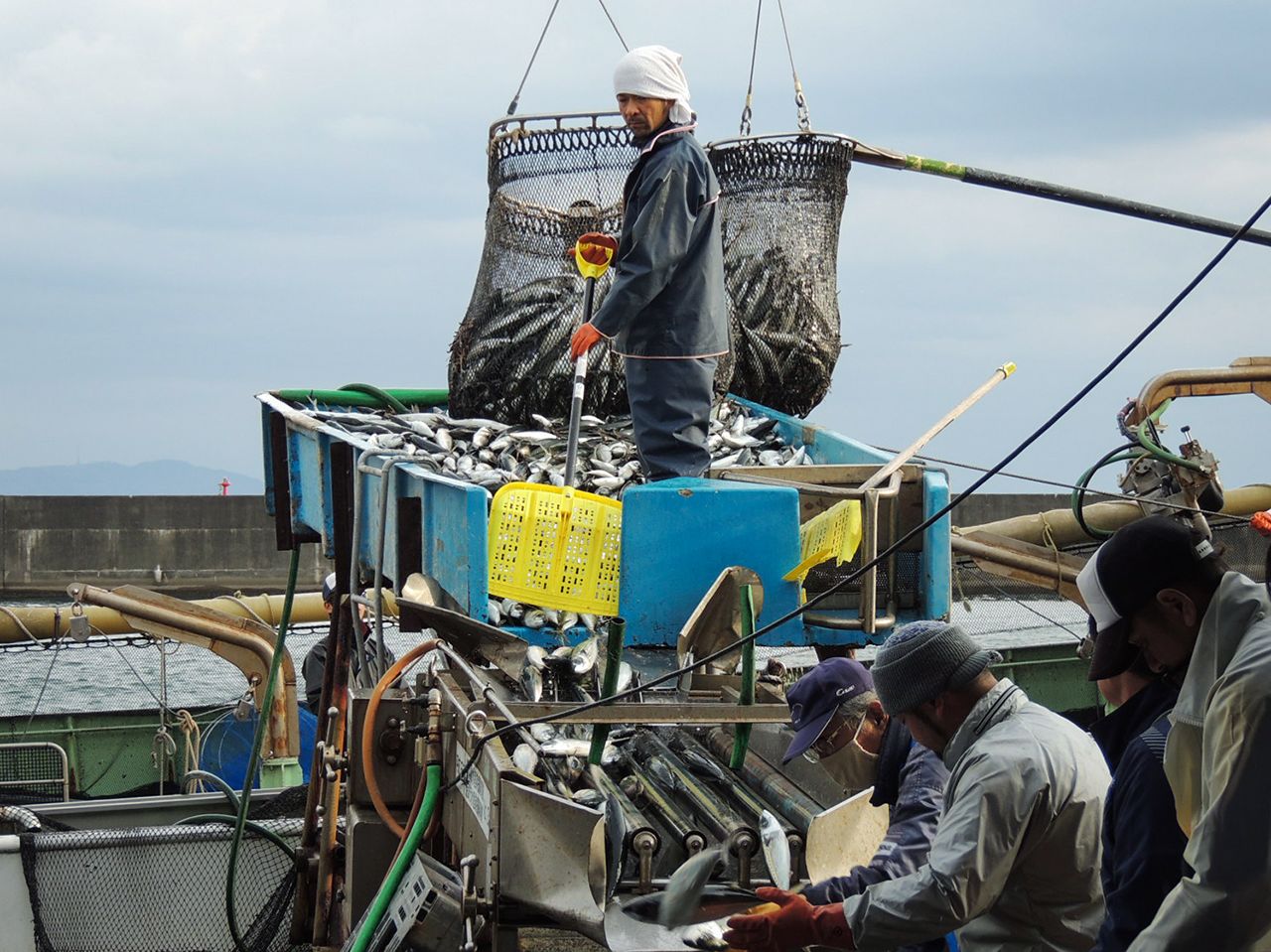 Mackerel being offloaded at Ogawa Port.

Yaizu is famed for its salted mackerel, a popular gift item in the Kansai region and elsewhere, but has also drawn attention for new products. The Ogawa Fishing Cooperative recently developed what it calls “Saba Chicken” that has proved a hit with fish lovers. Consisting of a cut of deboned mackerel marinated in deep-sea brine from Suruga Bay and steamed, it can be eaten straight out of the package or enjoyed as an addition to salads or rice. 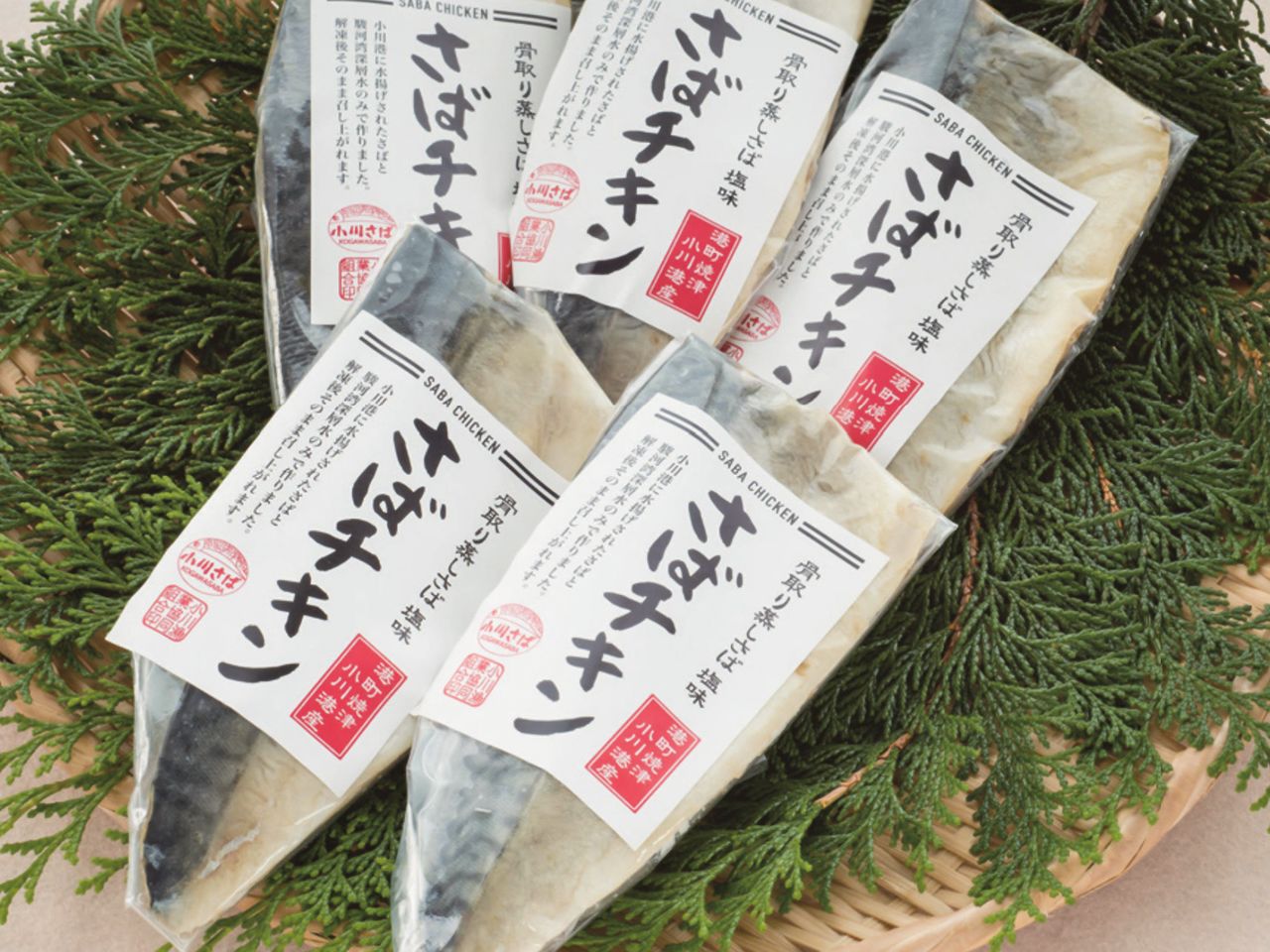 The restaurant Uogashi Shokudō at Ogawa Port offers an extensive selection of dishes featuring tuna, bonito, and mackerel as well as rice bowls and set meals of pink sakura shrimp, which are abundant in Sagami Bay, and other fresh seafood. Standard offerings like ramen and curry rice are also on the menu. 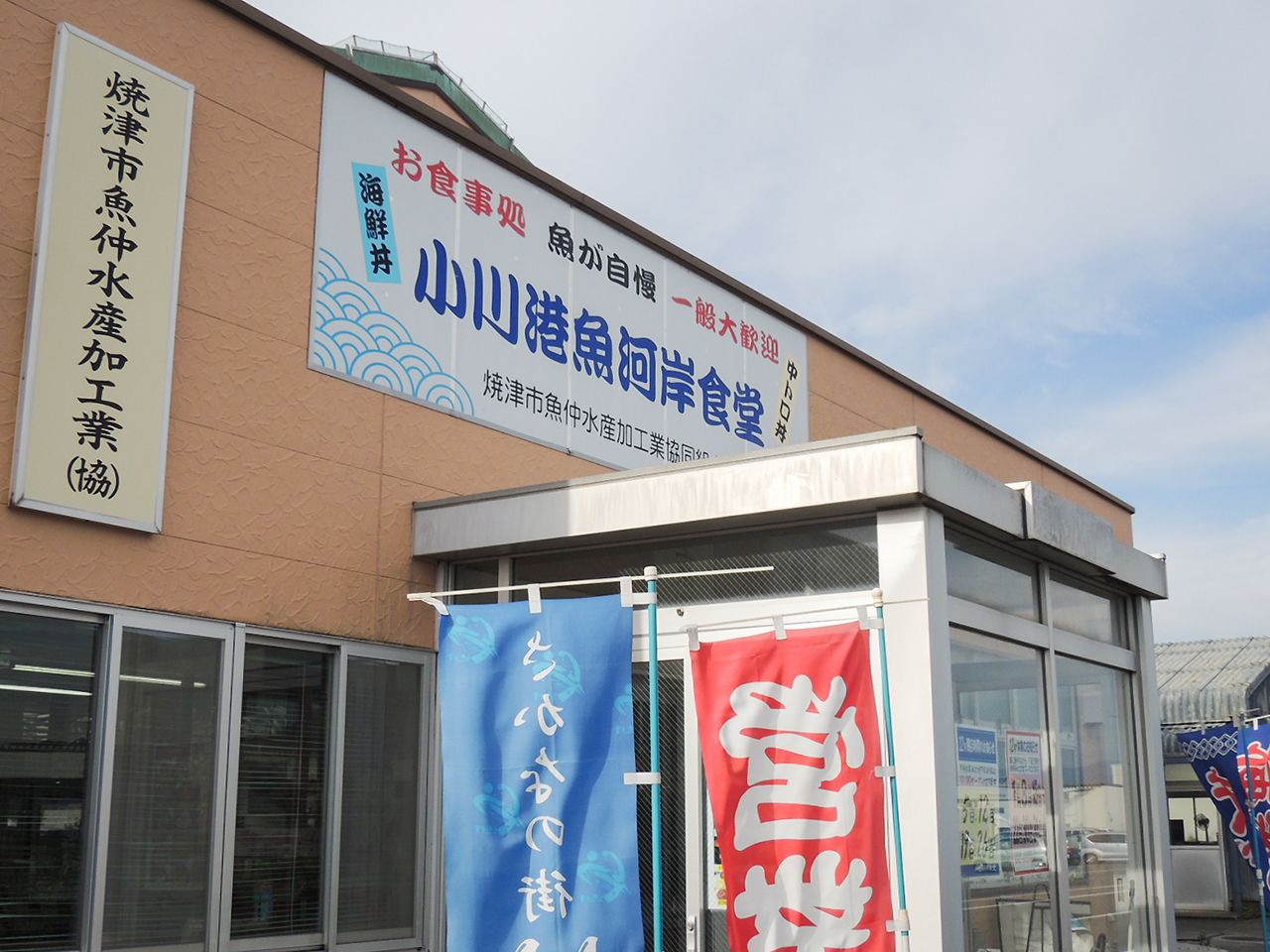 The Uogashi Shokudō is right in front of Ogawa Port. 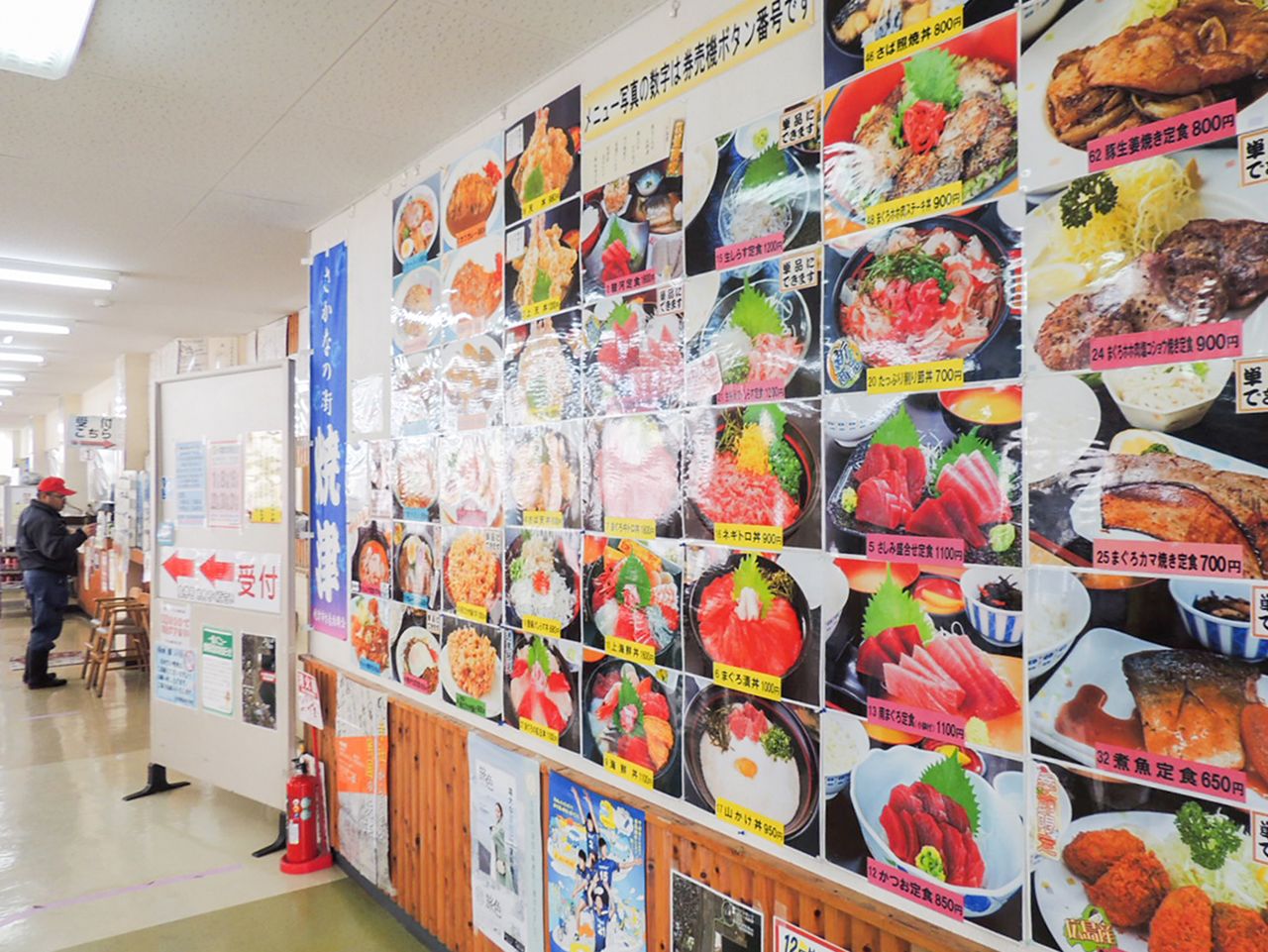 A wall display shows a mouth-watering assortment of seafood dishes on offer.

Restaurant staff say that the shop’s three most popular dishes are the Suruga and sashimi set meals and the fresh seafood rice bowl. At ¥1,600 per meal, the Suruga is the most expensive, but diners get their money’s worth as they can feast on tuna sashimi, deep-fried sakura shrimp, grilled salted mackerel, dried shirasu (sardine fry), and dark hanpen, a fish-paste cake that is a Shizuoka specialty. 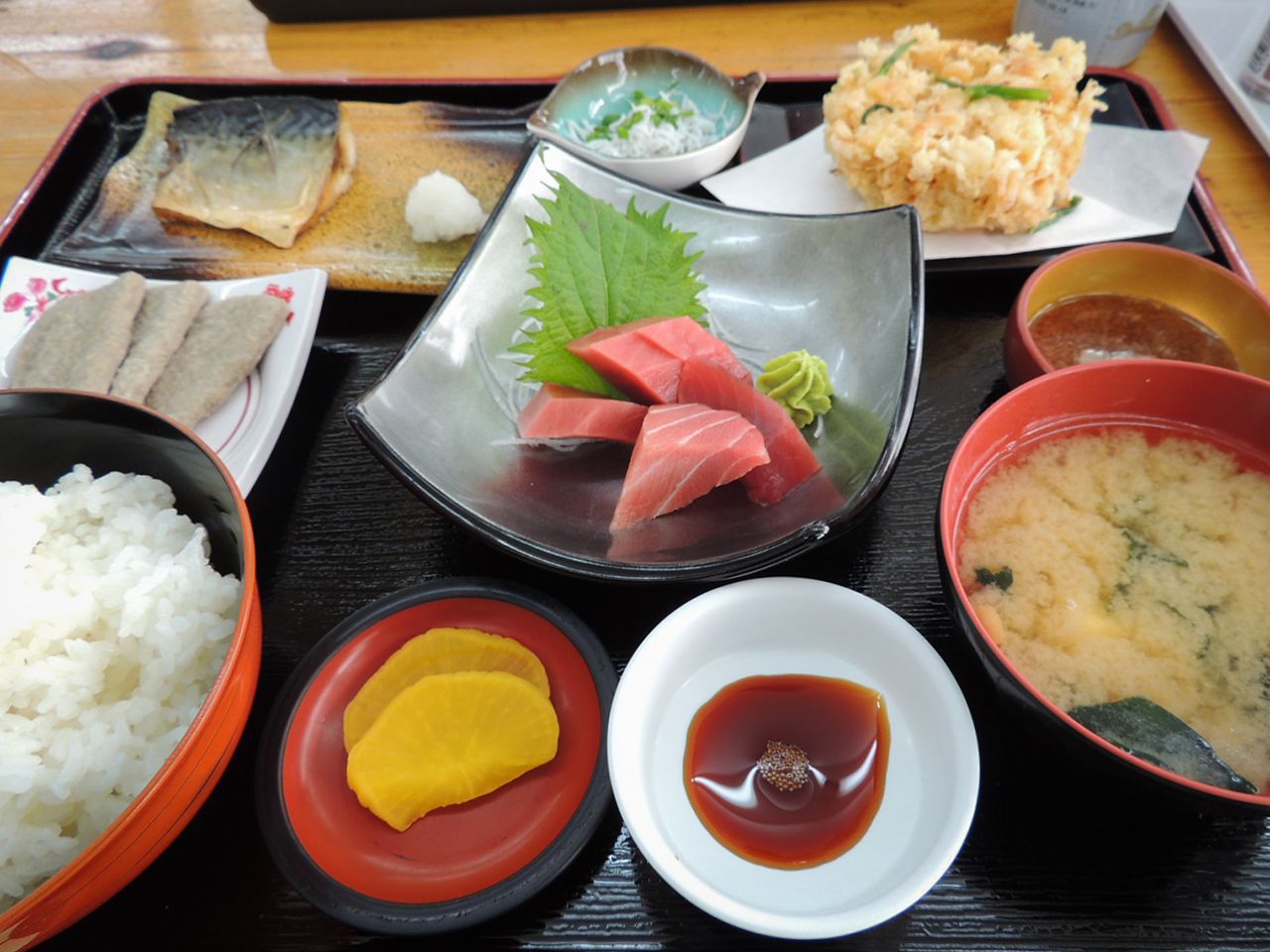 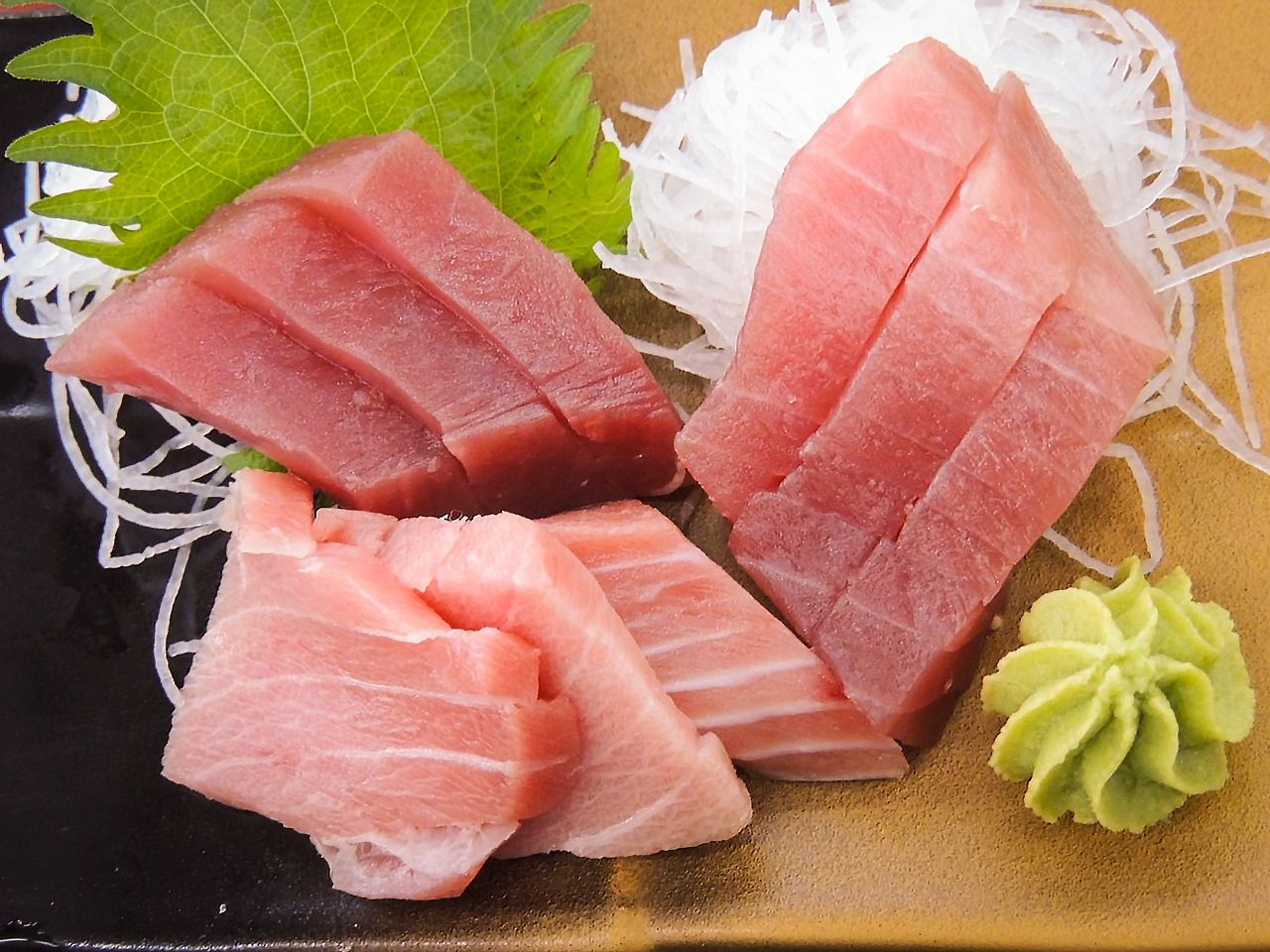 Bounty of the Sea

North of Ogawa is Yaizu Port, number one in Japan for bonito catches by volume. The deep-sea fleet fishing for tuna and bonito returning to port quickly unload their catches, the frozen-stiff fish cascading onto land in a dynamic flow. Yaizu also ranks second only to Kagoshima for katsuobushi production, and processing plants are scattered around the port.

The deep-sea fishing fleet also brings back a substantial amount of southern bluefin tuna, bundles of which are hauled off the ship by rope tied around their tails. Workers sort the catch by size, after which it is trucked off to market. 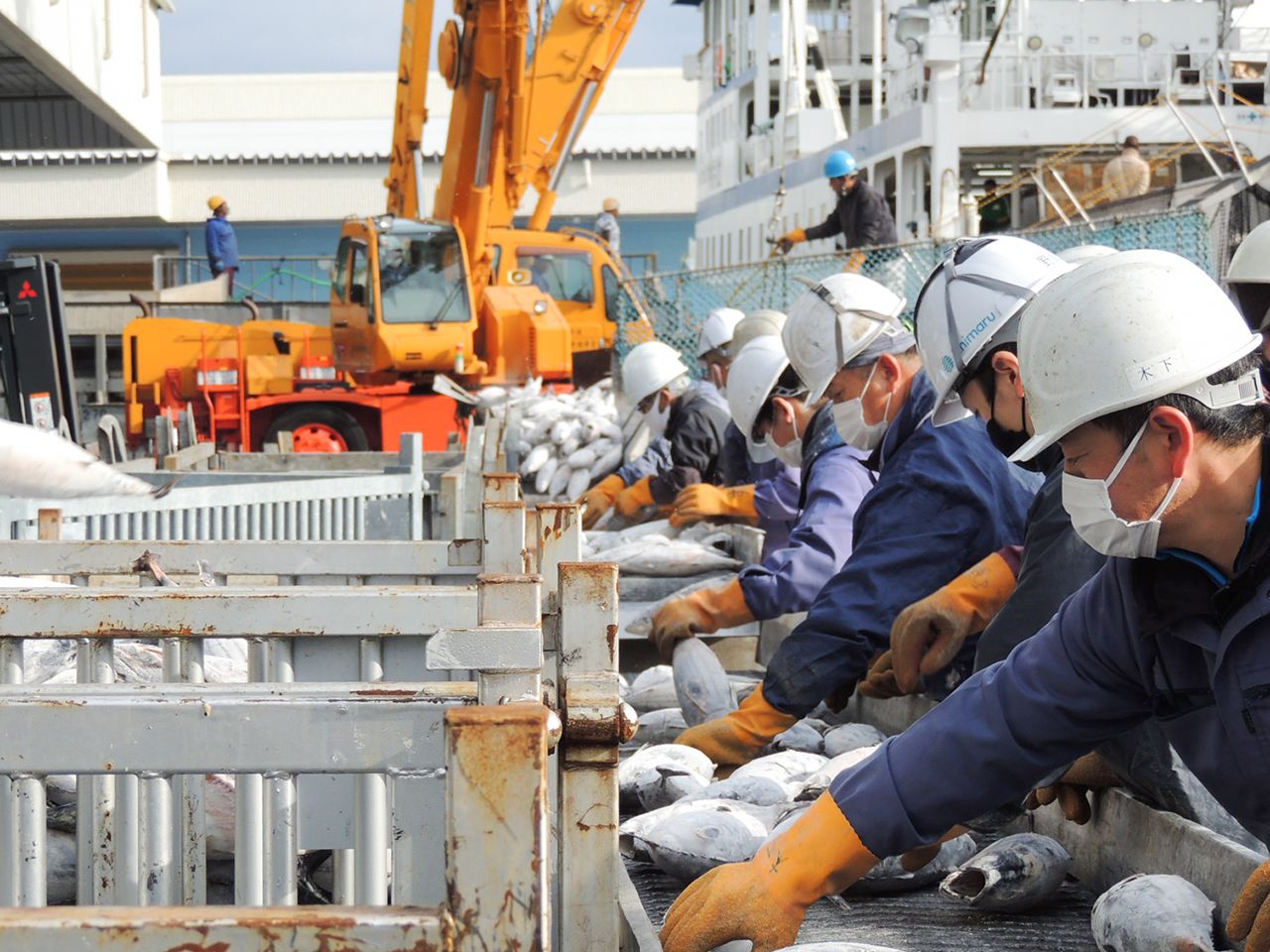 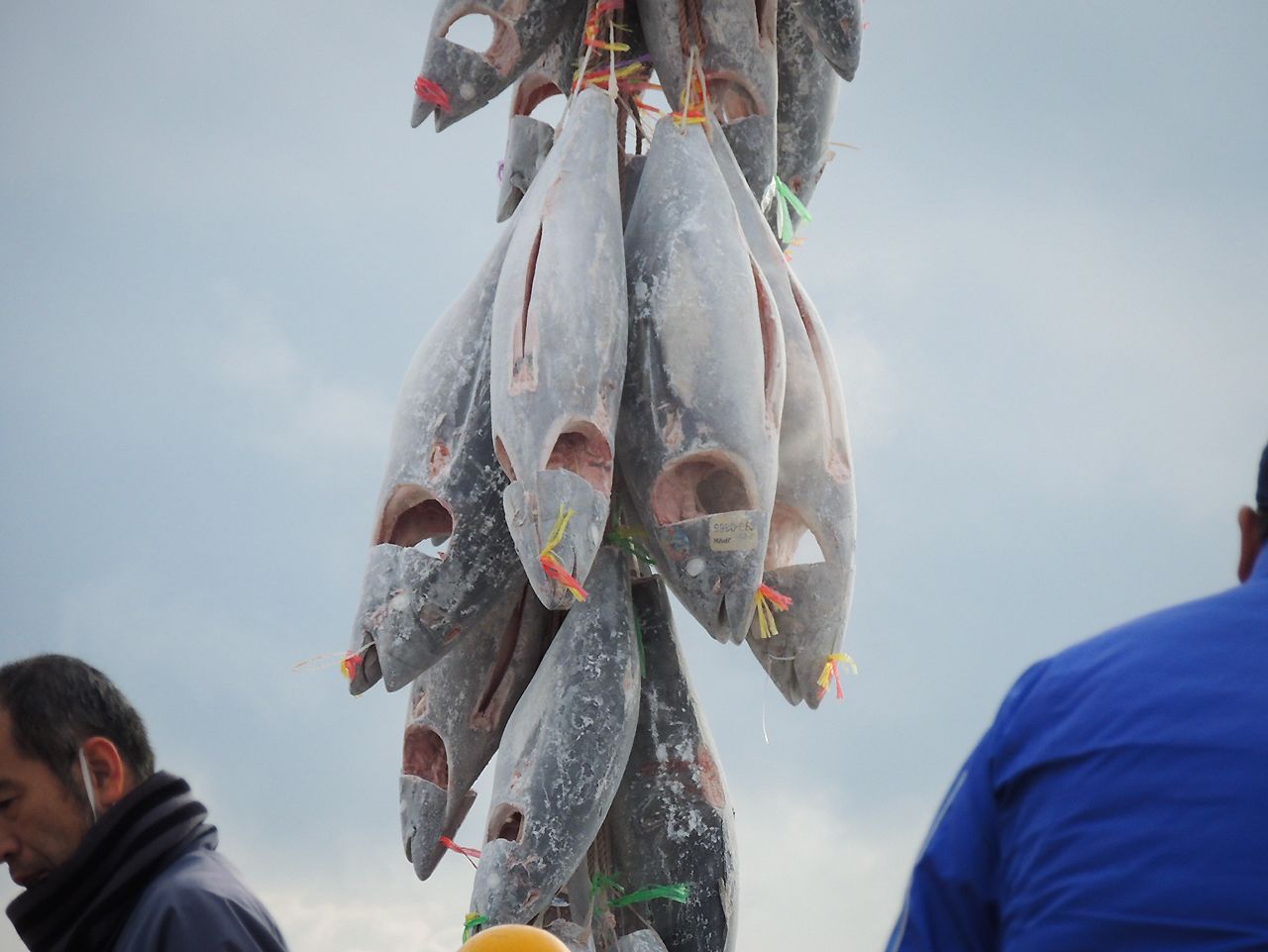 Visitors can enjoy local seafood products from various businesses around Yaizu Port or head to the Yaizu Fish Center near the Yaizu Interchange on the Tōmei expressway. The spacious restaurant Nagisa anchors the complex, which boasts nearly 70 shops and eateries. 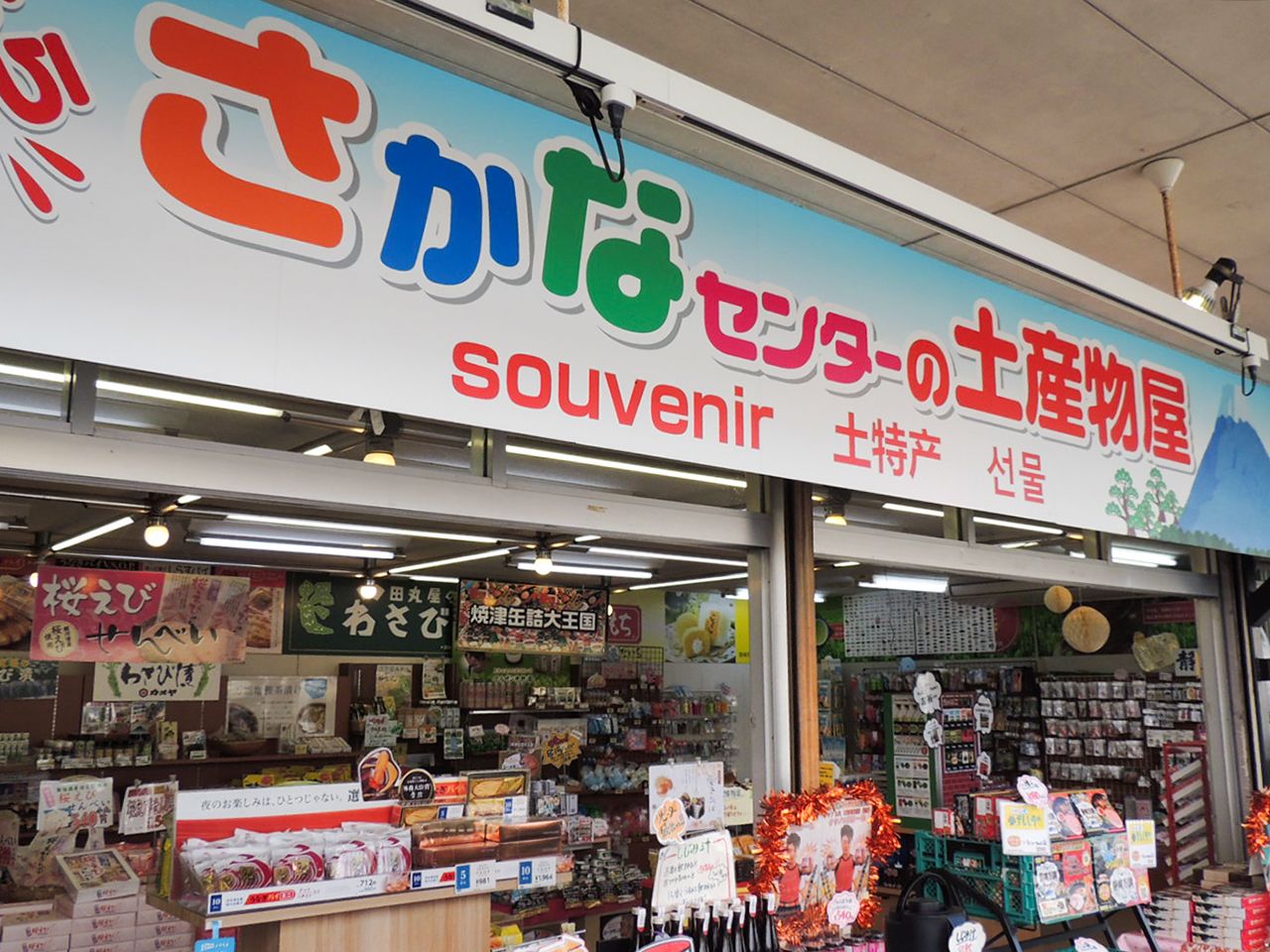 A souvenir shop at the Yaizu Fish Center.

Shops inside the complex offer all manner of seafood products, from fresh to processed, along with prepared foods and seasonings. Sadachō Shōten spotlights tuna, selling everything from haramo (underbelly flesh) and kama, the fish’s lower jaw, to vacuum-packed teriyaki-flavored kakuremi from the head of the fish. The shop also offers affordably priced dried squid, aji, mackerel, and kinmedai along with the local specialty sakura shrimp and wasabi-flavored items. 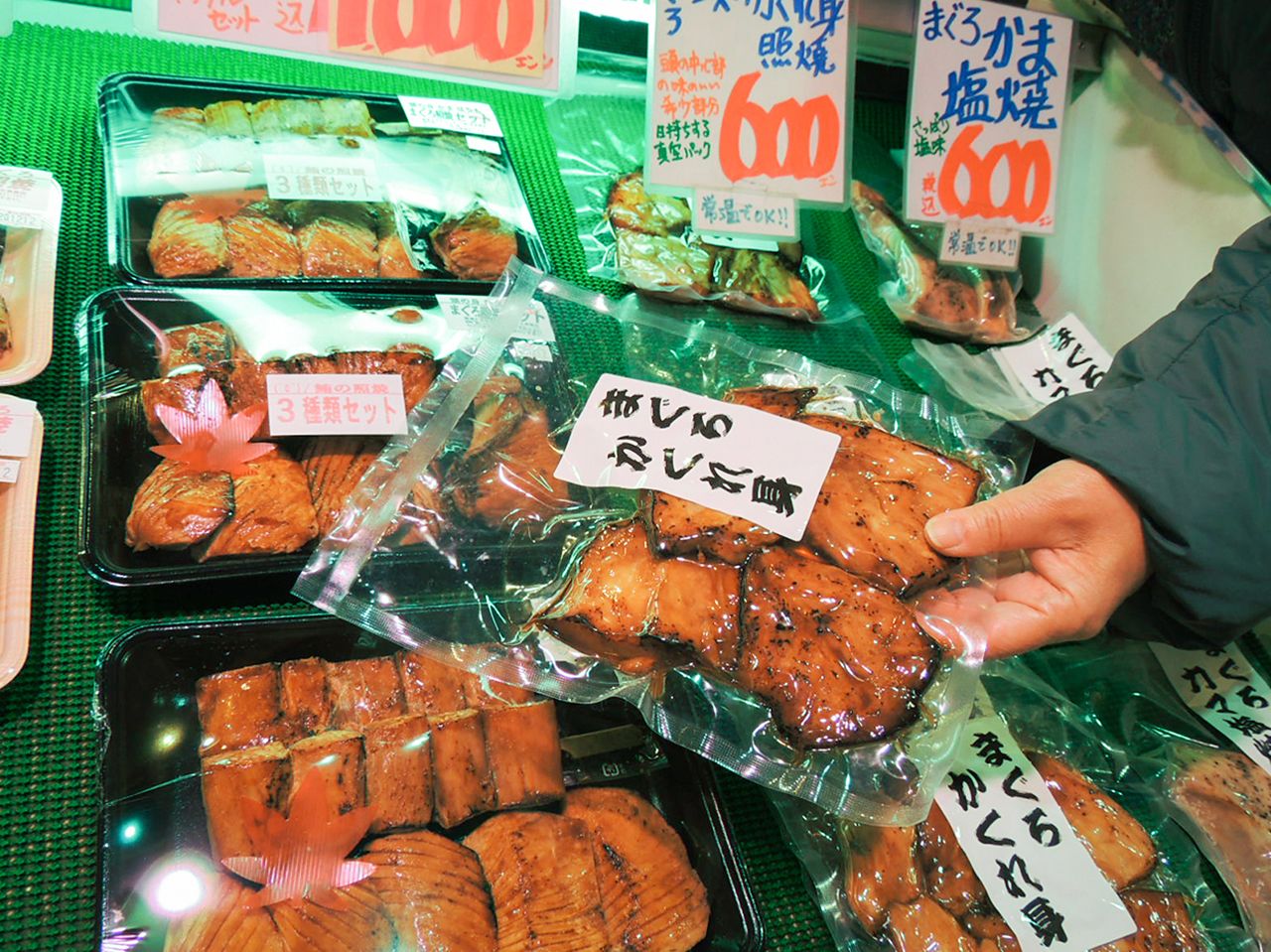 The shop Tairyō sells an unusual product, seafood-flavored soft-serve ice cream. The dessert comes in two varieties, one incorporating soy sauce-flavored bonito stock and another made with squid ink.

One of the best-selling gift items at the Fish Center is Bari Katsuo-kun, a katsuobushi chip snack that comes in popular flavors like wasabi-mayonnaise, ginger-soy sauce, and cheese. There is also a companion product made using mackerel. 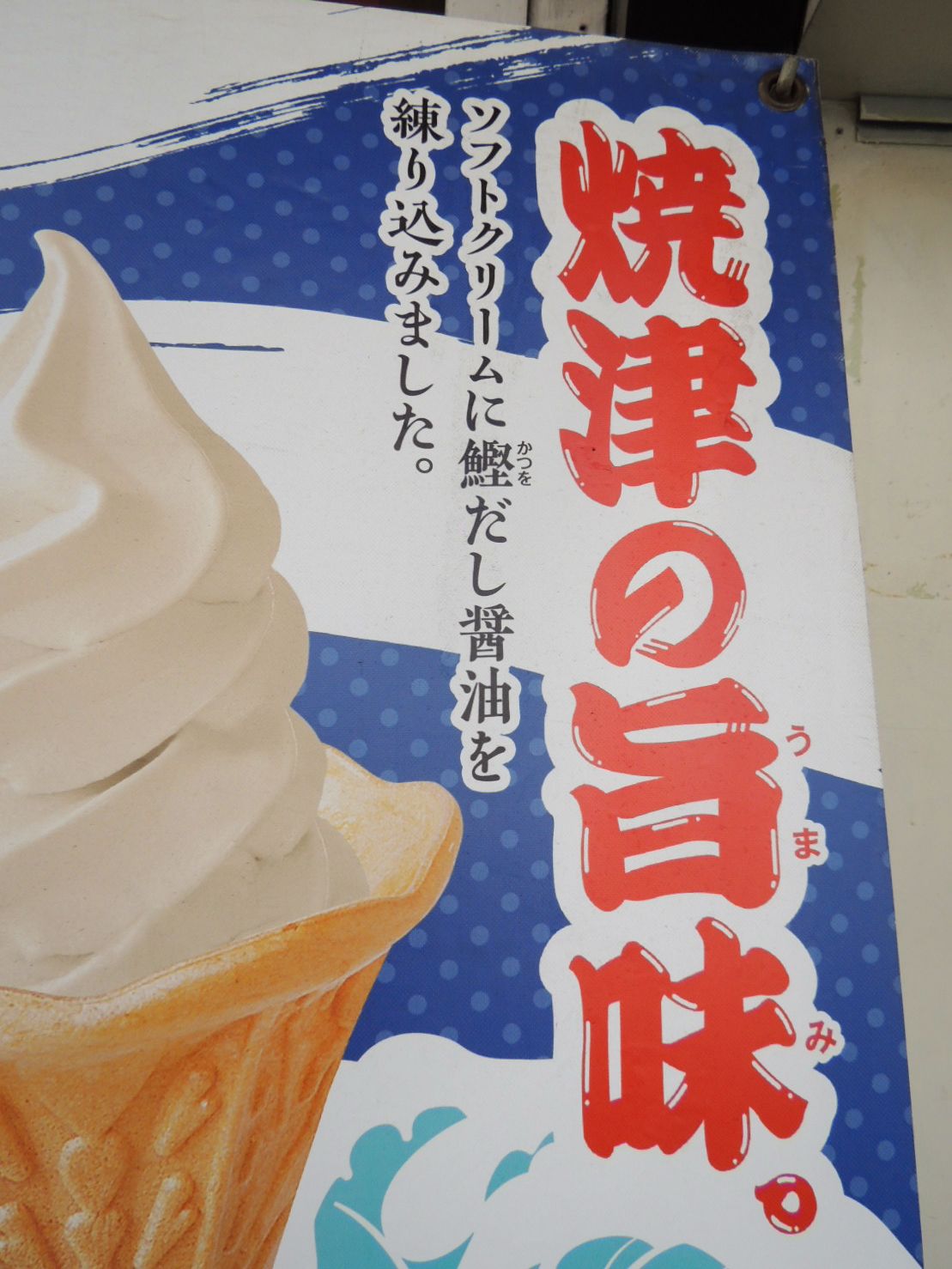 Only in Yaizu? A banner advertising bonito-flavored soft-serve ice cream. 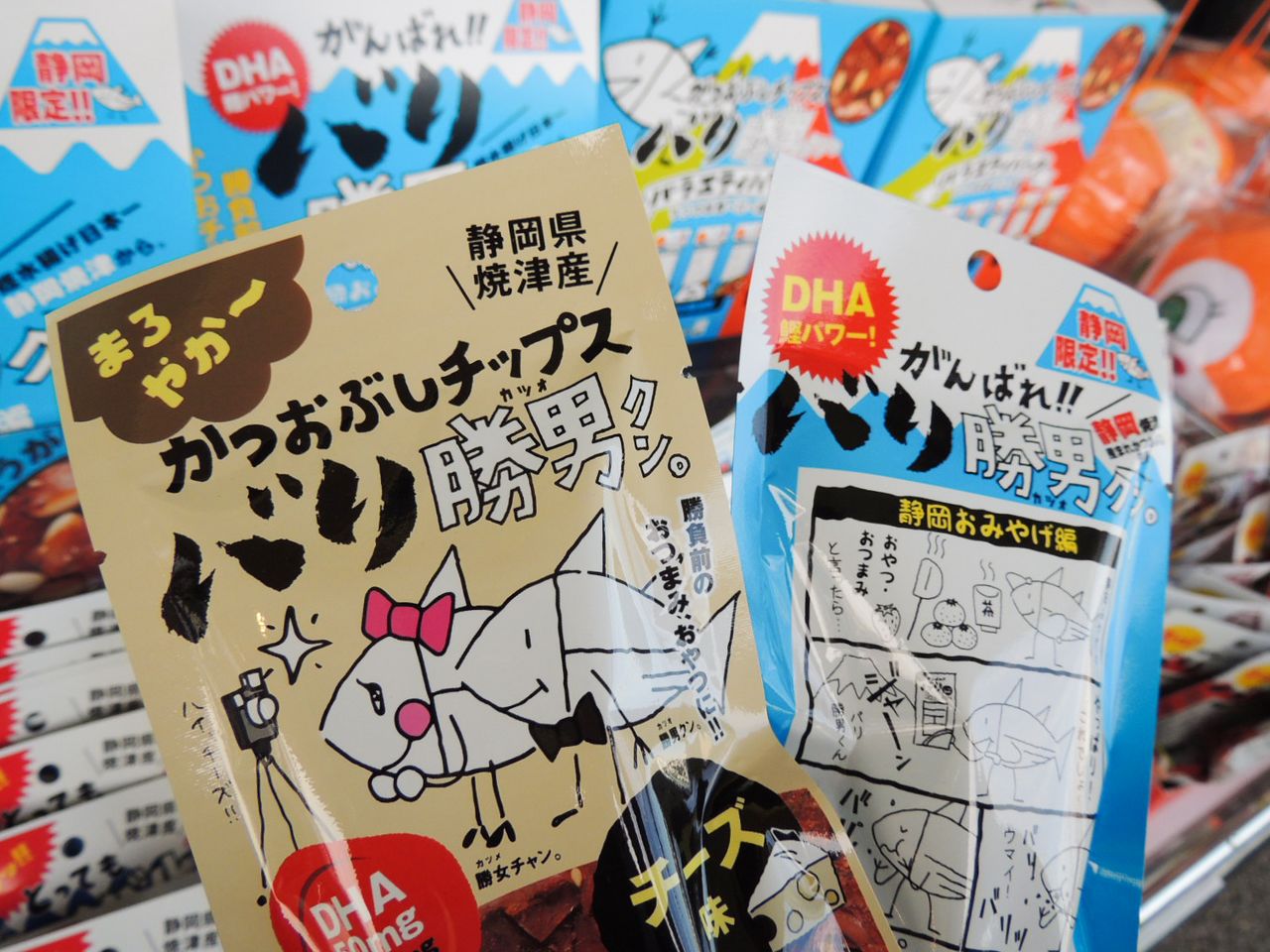 A selection of Bari Katsuo-kun chips.

Yaizu is easily accessible from Tokyo and can be reached in just an hour and 20 minutes on the Hikari shinkansen, via Shizuoka. From JR Yaizu Station, Yaizu Port is a little more than a kilometer away, a leisurely 20-minute walk that gives visitors time to enjoy the urban sights along the way. By car via the Tōmei expressway, Yaizu is around two hours from downtown Tokyo.

After visiting the port, travelers returning home by train can rest their weary feet at the public foot bath in front of Yaizu Station. Free of charge, it was set up by the municipal authorities to publicize the natural hot springs that bubble up in the city. 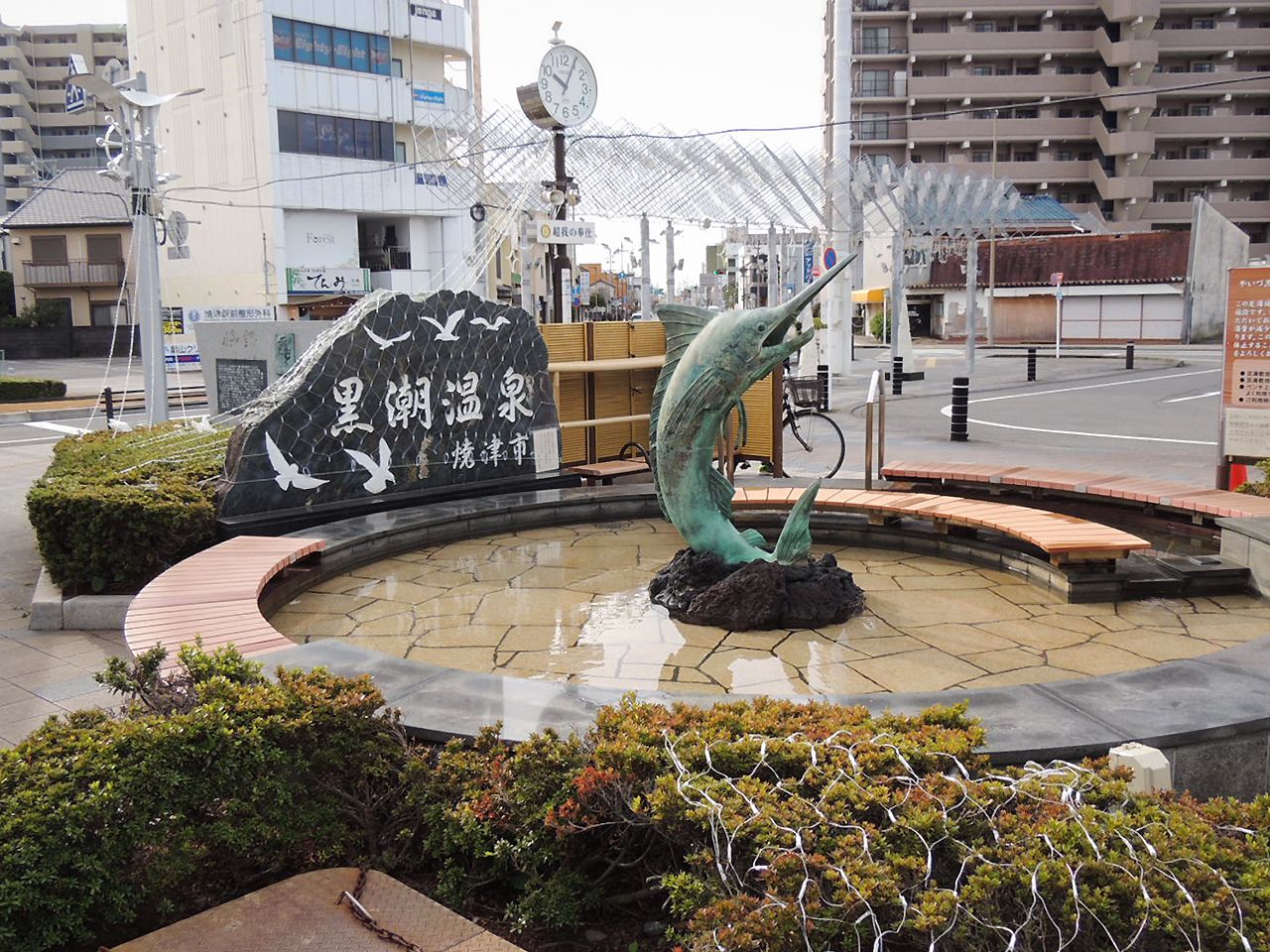 The foot bath in front of Yaizu Station.

(Originally published in Japanese. Photos by the author unless otherwise noted.)