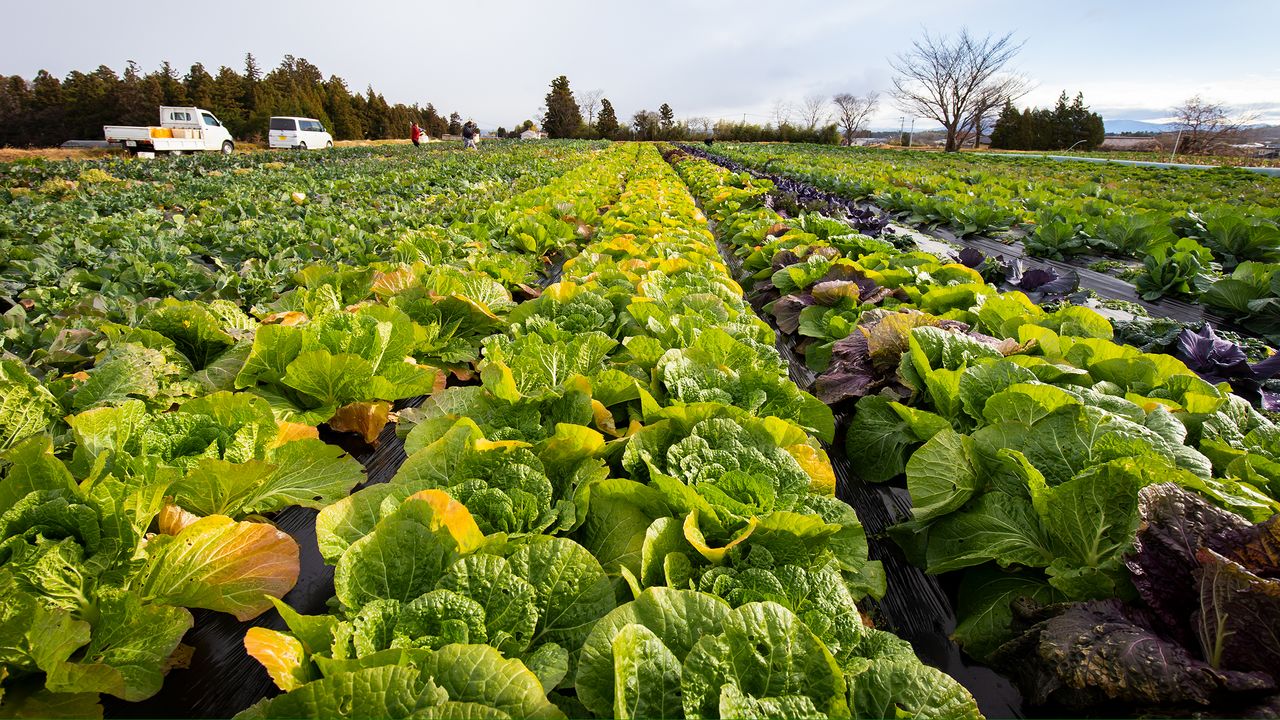 Food and Drink Lifestyle Jun 4, 2021
Blessed with fertile soil, clear water, and a temperate climate, Kōriyama in Fukushima Prefecture is a prime agricultural region. A new generation of growers in the area, on whose shoulders the future of the prefecture’s farming industry lies, are teaming up with local food service businesses to build the Kōriyama brand.

Kōriyama is situated on a plain in central Fukushima Prefecture, with Mount Adatara towering to the north, the vast waters of Lake Inawashiro to the west, and the wilds of the Abukuma highlands to the east. The area boasts mineral-rich clay soil, abundant water, and mild climate that make it ideal for farming. Kōriyama, for instance, produces the most rice in a prefecture that ranks seventh in the country for production of the staple food.

The area also produces a wide variety of tasty and nutritious vegetables that have a distinct sweetness owing to the region’s large fluctuation between day and nighttime temperatures. Despite its abundant farming output, though, like other parts of Fukushima, Kōriyama suffers from low brand recognition, with no particular vegetable or variety of rice being associated with the locale. Intent on boosting the image of locally-grown vegetables, in 2003 a group of growers set out to build the Kōriyama brand. Together, the farmers selected plant varieties best suited to the soil and climate and began selling their produce at local events and at farmers’ markets in Tokyo, working hard to woo consumers.

The focused approach of growing vegetables using methods that take advantage of specific local characteristics proved a costly and labor-intensive endeavor, however. The farmers had to largely forego regular distribution routes as they were unable to price their produce at a level sufficient to recoup costs, with it also being difficult to supply set quantities according to a fixed schedule. Selling directly to customers, though, required extra effort, including searching out restaurants and other buyers and running vegetable stands at farmers’ markets. Overcoming consumer fears about food safety, even a decade after the nuclear disaster at Fukushima Daiichi, is another hurdle growers have worked hard to clear.

Even with the extra burden, the ranks of young farmers who are enthusiastic about putting Kōriyama and their home prefecture on the vegetable map are growing. Banding together with like-minded restaurant owners, these farmers are working hard to promote tasty local vegetables. 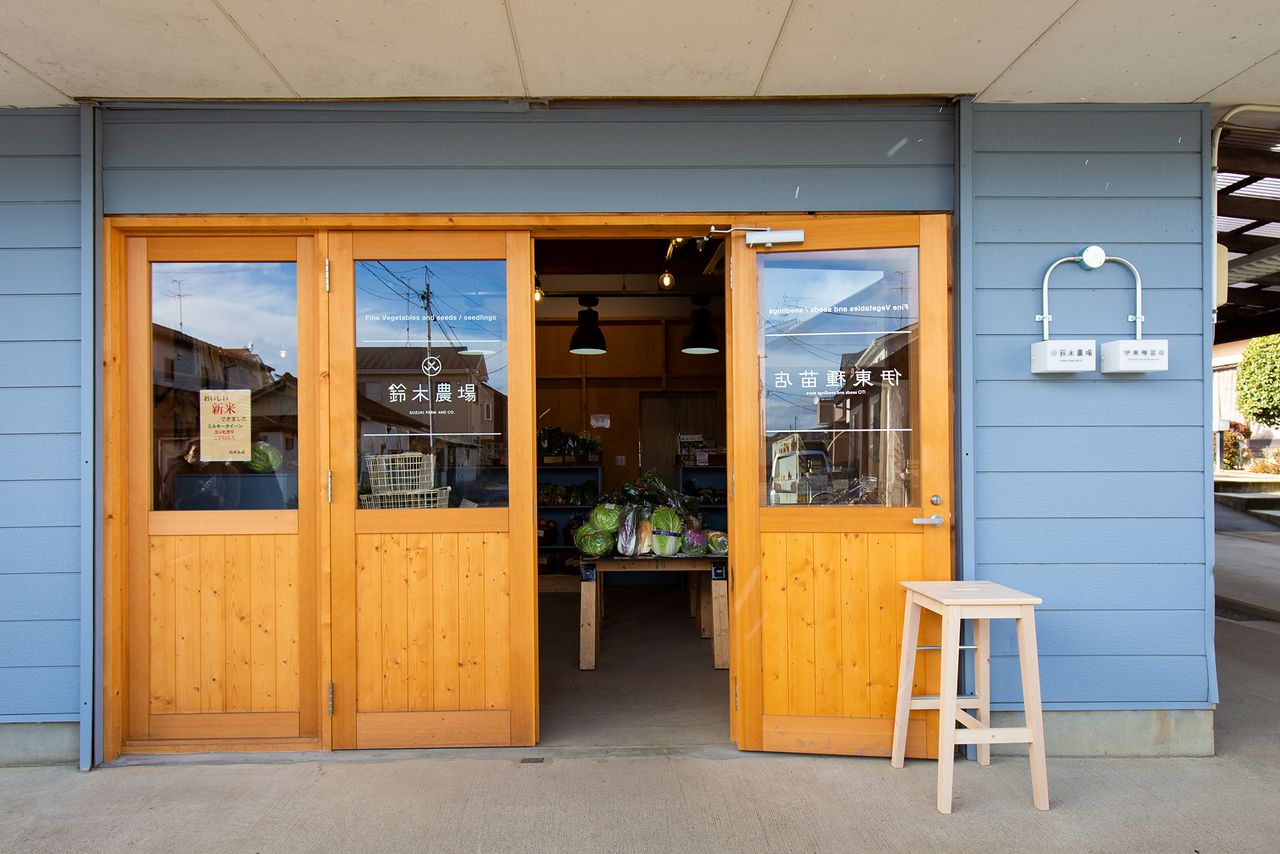 The vegetable stand run by Suzuki Farm, which heads the Kōriyama Brand Vegetable Council, doubles as a seed and seedling store. 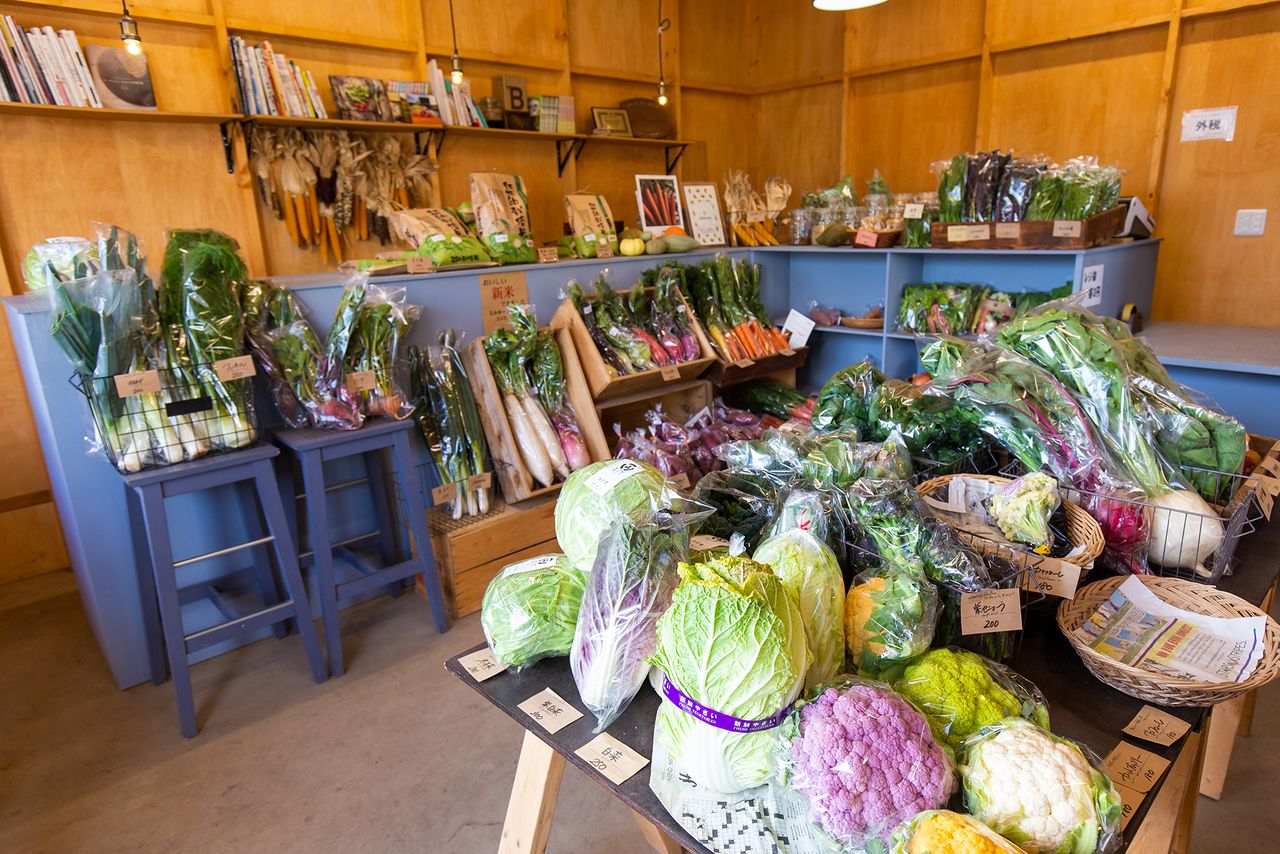 In addition to Kōriyama brand vegetables, the stand offers a wide assortment of less-common varieties of products.

Ōtake Hideyo, owner of Nikkei Farm, uses only organic fertilizer on his fields, where he grows around 100 different types of vegetables. He is especially proud of his spinach, the juicy leaves and extra-long stems of which he says have a sugar content that is higher than that of watermelon.

Determined to grow sweet-tasting vegetables and avoid stressing the soil and seedlings, Ōtake uses no chemicals. He even refrains from using manure to fertilize his fields as he cannot be sure about the composition of the feed the livestock have consumed. Cabbage fresh from his fields tastes just as good as his spinach, tasting wonderfully sweet, right down to the ribs. 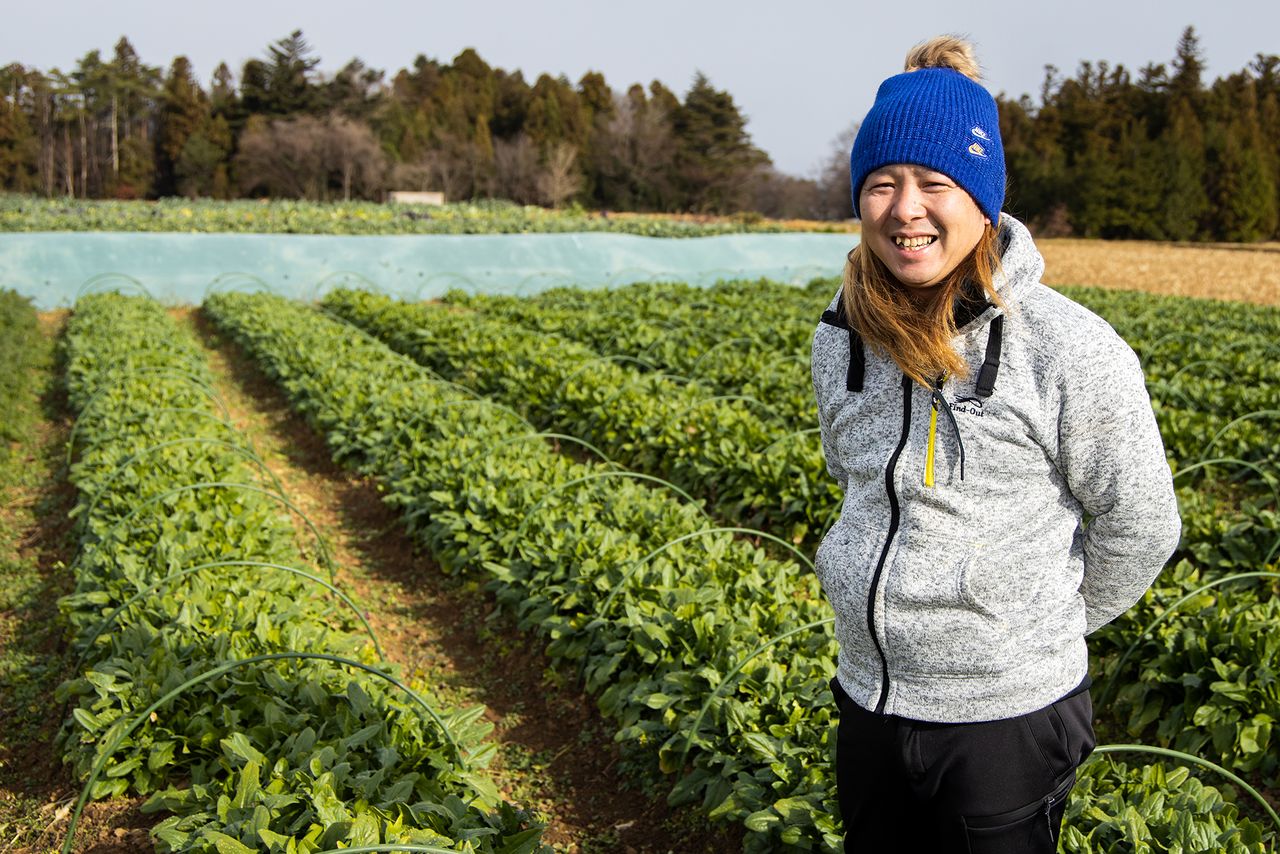 Ōtake stands in front of his spinach plot. Always cheerful, he turns serious when the subject is farming. 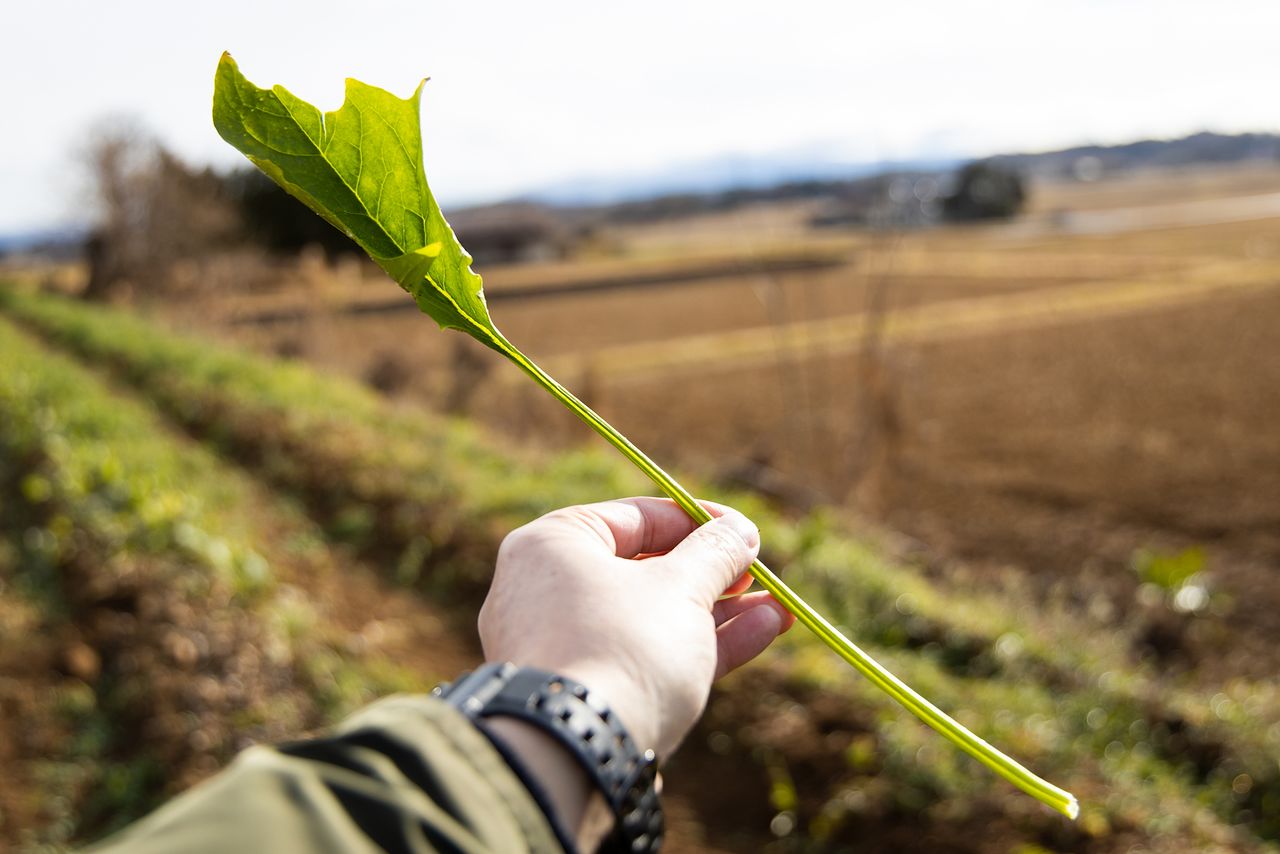 Despite being so particular about his growing methods, Ōtake is relatively new to farming. After graduating from high school, he worked as a hair stylist and only came back to his family farm after his mother took ill and was no longer able to work in the fields. “I took my mother’s illness as a sign that I should take up farming,” he says. “Since I’m a licensed hairdresser, I thought I could always go back to that if farming didn’t work out for me.”

One factor influencing Ōtake’s decision to go pesticide-free is that he has been an inveterate insect-lover since childhood. If he finds insects on his vegetables, he collects them in a jar and releases them in the woods on his way back from the fields. Such a hands-on approach requires him to pay close attention to crops as they develop. Although it is a lot of work to keep his vegetables insect-free, he says that “it’s natural to have bugs in the fields and frogs in the rice paddies. In fact, insects can tell me a lot about the condition of the fields and how I should grow my vegetables. I think this attitude makes farming a good fit for me.” 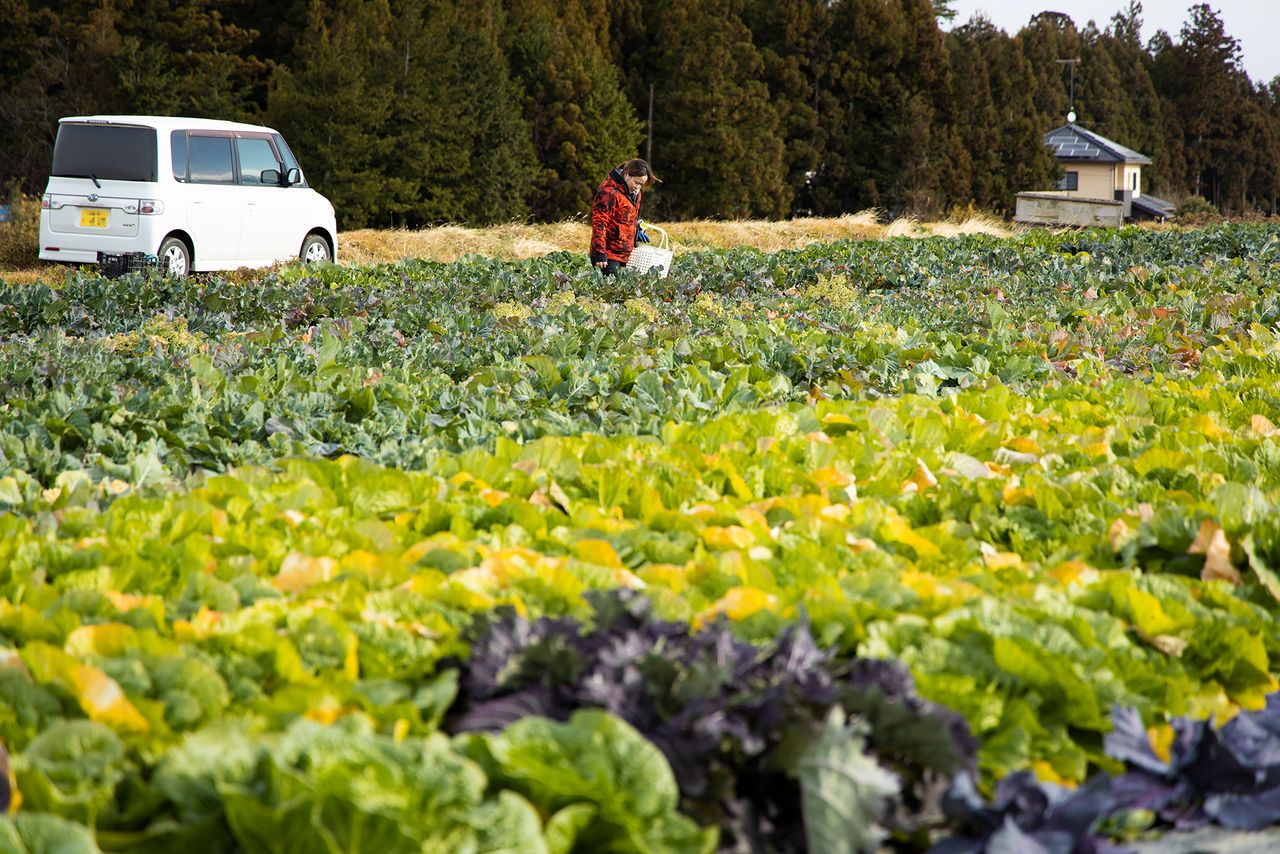 Ōtake and his wife grow radicchio rosso, an Italian vegetable, and other unusual varieties on the land beyond the cabbage plot. 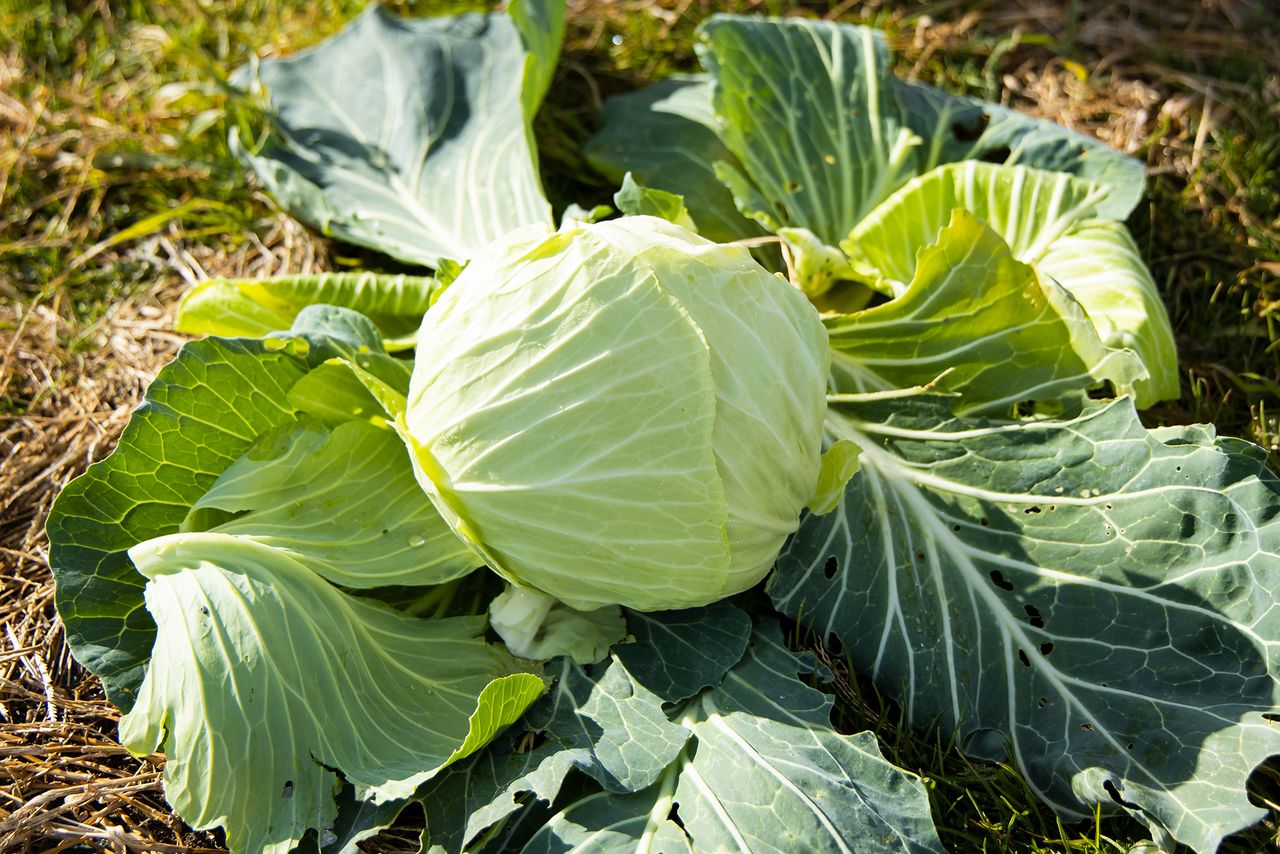 A freshly harvested Kiwami variety of cabbage, which are known for being sweet and tender.

Through trial and error and under the guidance of Suzuki Kōichi, owner of Suzuki Farm and head of the Kōriyama Brand Vegetable Council, Ōtake’s crop yields gradually improved. His farm’s yearly sales, ¥1 million when his mother ran it, grew to ¥6 million in his second year. By his third year, 2011, he seemed to be on track to record ¥10 million in sales. But then the March 11 disaster struck, forcing him to dispose of his entire crop.

“I had put so much time and effort into growing pesticide-free vegetables, and here I was, powerless in the face of nuclear radiation,” he recalls. “But that was only the start of my troubles. In order to receive compensation for damages from the accident, for two years I had to continue growing vegetables, only to throw them out at each harvest. Emotionally, it was very hard to deal with.”

Along with the duress of disposing of his crop, the accident had earned Fukushima agricultural products a negative reputation. “My sales plummeted to ¥300,000 a year and I had to take a side-job in construction to make ends meet,” Ōtake recounts. With he and his wife welcoming a new baby, though, he says that his desire to grow tasty vegetables burned brighter than ever. “I was able to get back to farming full-time thanks in large part to the help of fellow farmers and others who are dedicated to Kōriyama vegetables.”

Shinohara Yūtarō, who runs two local izakaya, is one of Ōtake’s most dedicated supporters. “Shinohara loves my spinach, and he cracks the whip over me, telling me to make sure I grow a tasty crop again this year,” jokes Ōtake. “Farming is hard work, but I want people to enjoy my vegetables, and that desire is what motivates me.” In addition to running his two pubs, Shinohara wholesales vegetables and does the legwork to get orders for Ōtake’s vegetables from top-class eateries in Tokyo. “That really gave me a push and broadened my horizons,” Ōtake declares. 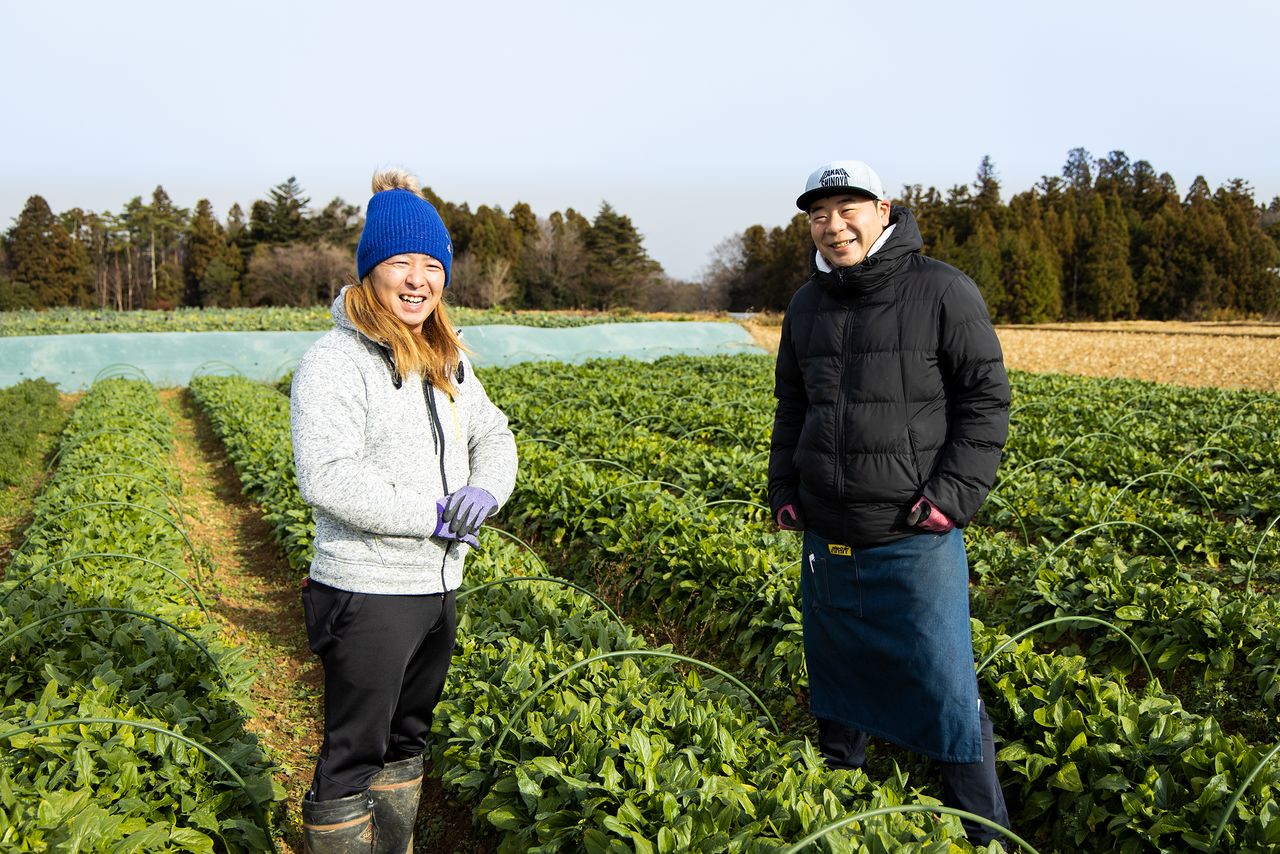 Shinohara Yūtarō (right), owner of the Shinoya izakaya and other businesses, with Ōtake at his farm. 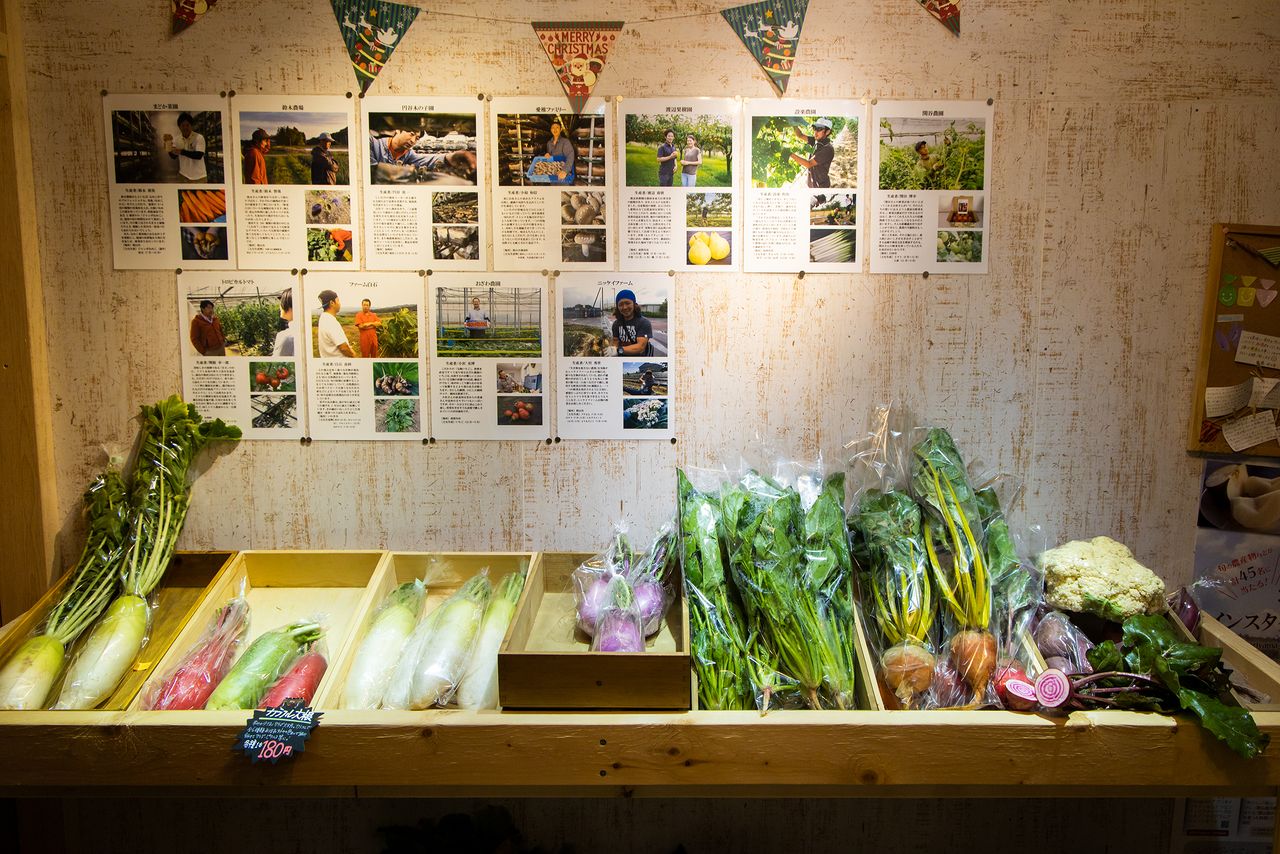 The walls of the Nikkei Farm vegetable stand display articles about the activities of partner farmers.

Shinohara bills his pair of traditional pubs, which serve local vegetables, fish, and sake, as “the home of the flavors of Fukushima.”

Shinohara used to work at a national chain izakaya facing Kōriyama Station. He was earning a steady salary, but whenever visitors asked for locally brewed sake or wanted to know whether Kōriyama had any distinctive cuisine, Shinohara found the standard menu dictated by the chain’s front office restrictive. For a few years after the March 11 disaster, the area around Kōriyama buzzed with workers dispatched to help with reconstruction, but Shinohara worried that local farmers, who were more or less left to fend for themselves, would go under.

In 2014, he set up his first business, an izakaya near Kōriyama Station that focuses on food and sake from Fukushima. 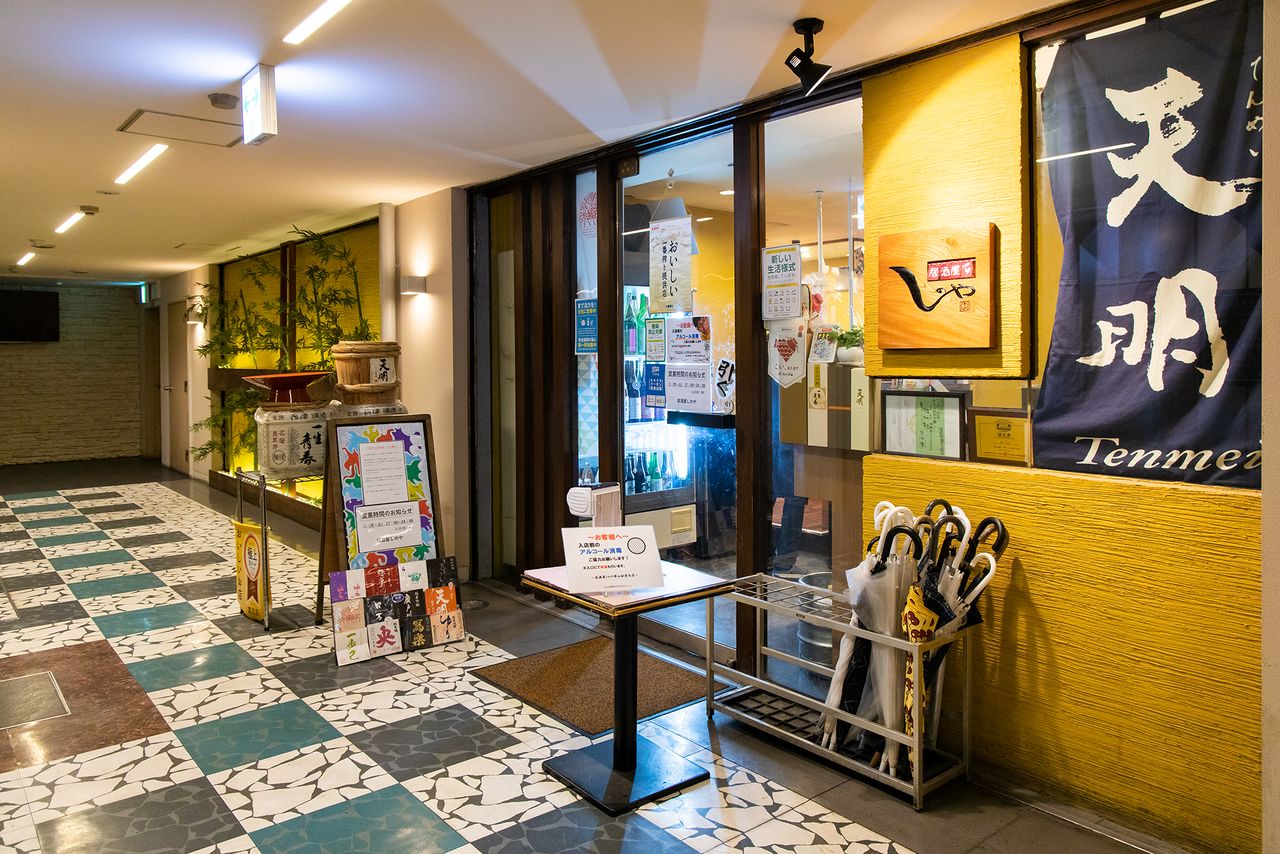 To source the best-quality vegetables, Shinohara makes a point of engaging directly with growers, discussing the types of dishes that can highlight the great taste of their produce. Once Shinohara has created appropriate recipes, he asks growers to taste the results to gain their approval. A year after opening his first izakaya, Shinohara opened a second location and also branched out into wholesaling and online sales. “I want to introduce more diners to the great flavors of Fukushima. Because of my close relationships with growers, I’m convinced that I can make a go of it.”

The COVID-19 pandemic has impacted all restaurateurs, including Shinohara. Sales at his two izakaya are down 70%, as he has been forced either to close temporarily or operate for shorter hours.

Referring to Shinohara, Ōtake says that “after the disaster, vegetable growers were having a really tough time, while construction and restaurants were buoyed by the influx of reconstruction money. I felt that growers like me were being left to bear the brunt of the disaster, but Shinohara would come over often and encourage me to keep going. With the pandemic and people staying at home more, I want to return the favor and support him by selling my vegetables through his wholesale operation. Thankfully, he’s been able to find buyers.”

The vegetable wholesaling business is not the only idea Shinohara had up his sleeve, though. In January 2021, he opened the vegetable shop Vegi-Fresh Shinoya in town. The store offers menu suggestions for the vegetables he sells, a service popular with local residents. 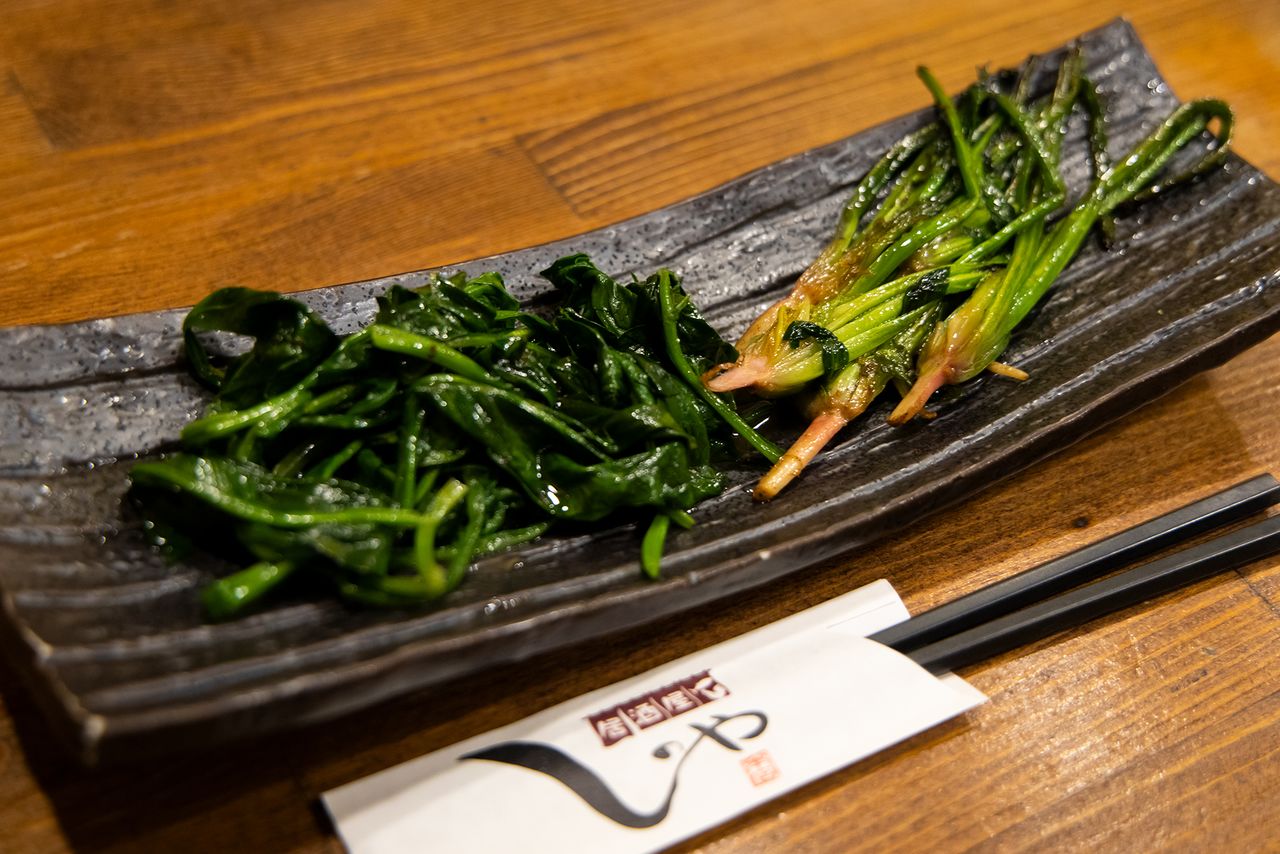 Sauteed spinach from Nikkei Farm. Sautéing brings out even more of the vegetable’s sweetness.

(Originally published in Japanese. Reporting, text, and photos by Nippon.com. Banner photo: A field of cabbages at Nikkei Farm.)