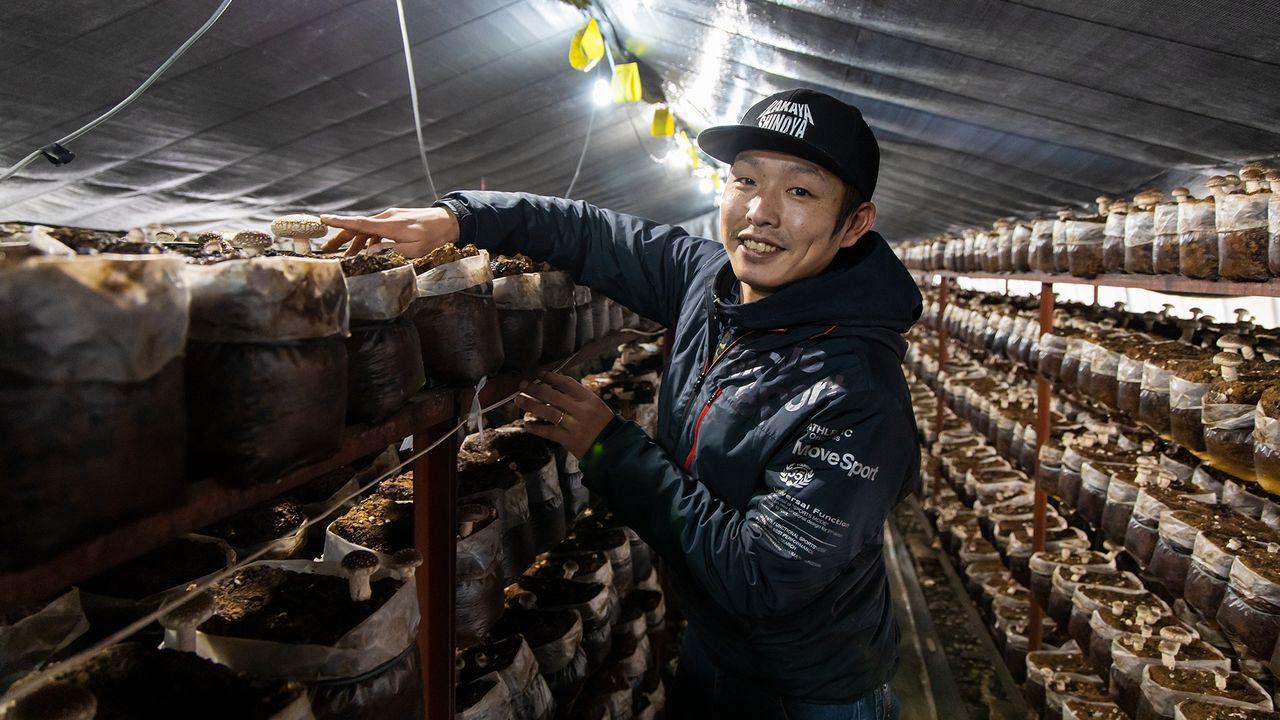 Food and Drink Lifestyle Jun 11, 2021
Kōriyama in Fukushima Prefecture is a prime agricultural center, but farm products from the area suffer from low consumer awareness. Looking to build the local brand, a new generation of young growers are finding innovative and sustainable ways to showcase what they grow.

Ogura Kazunobu, head of farming cooperative Aishii Family, takes pride in the large, meaty shiitake mushrooms that he cultivates on his farm near Lake Inawashiro in central Fukushima Prefecture. He is one of a number of growers who count on Shinoya, a chain of traditional Japanese pubs in Kōriyama operated by local Shinohara Yūtarō, to buy his produce. 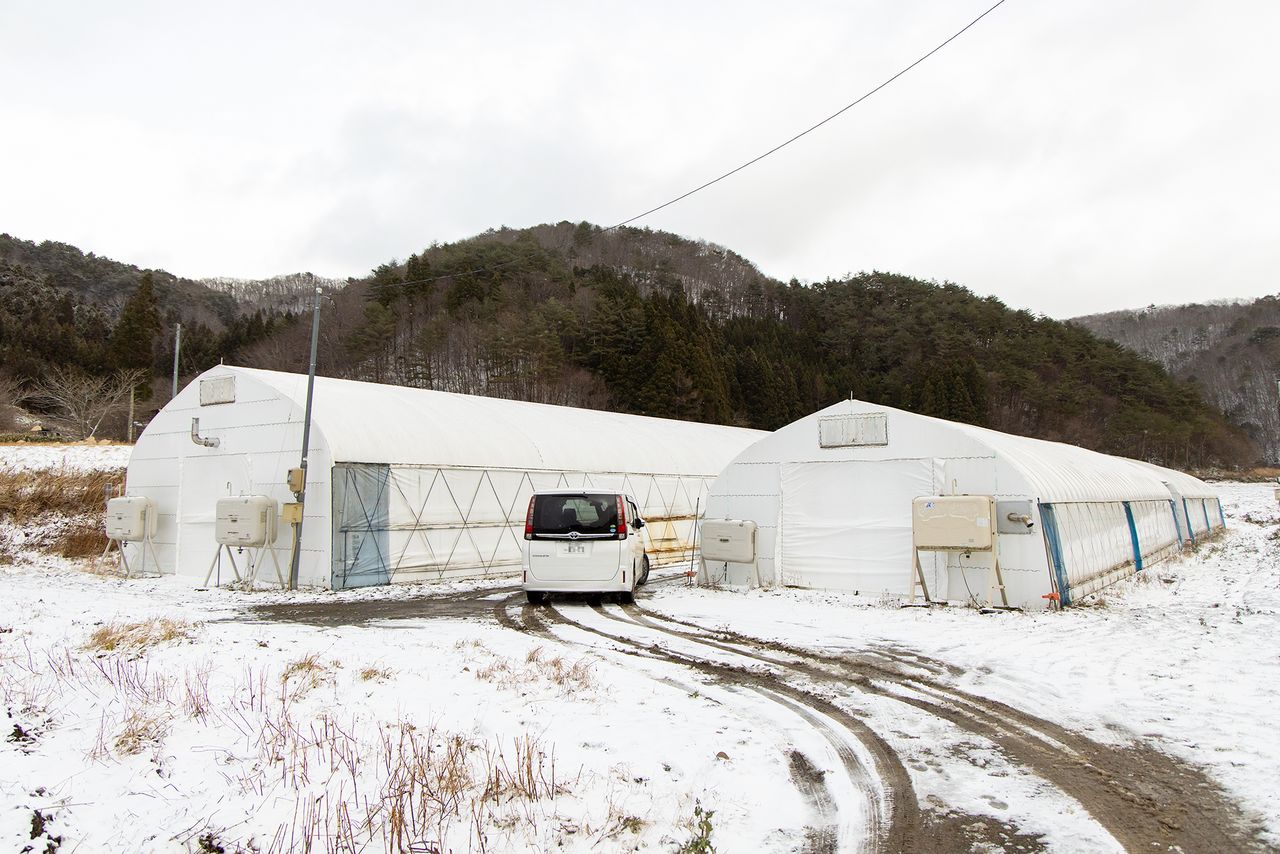 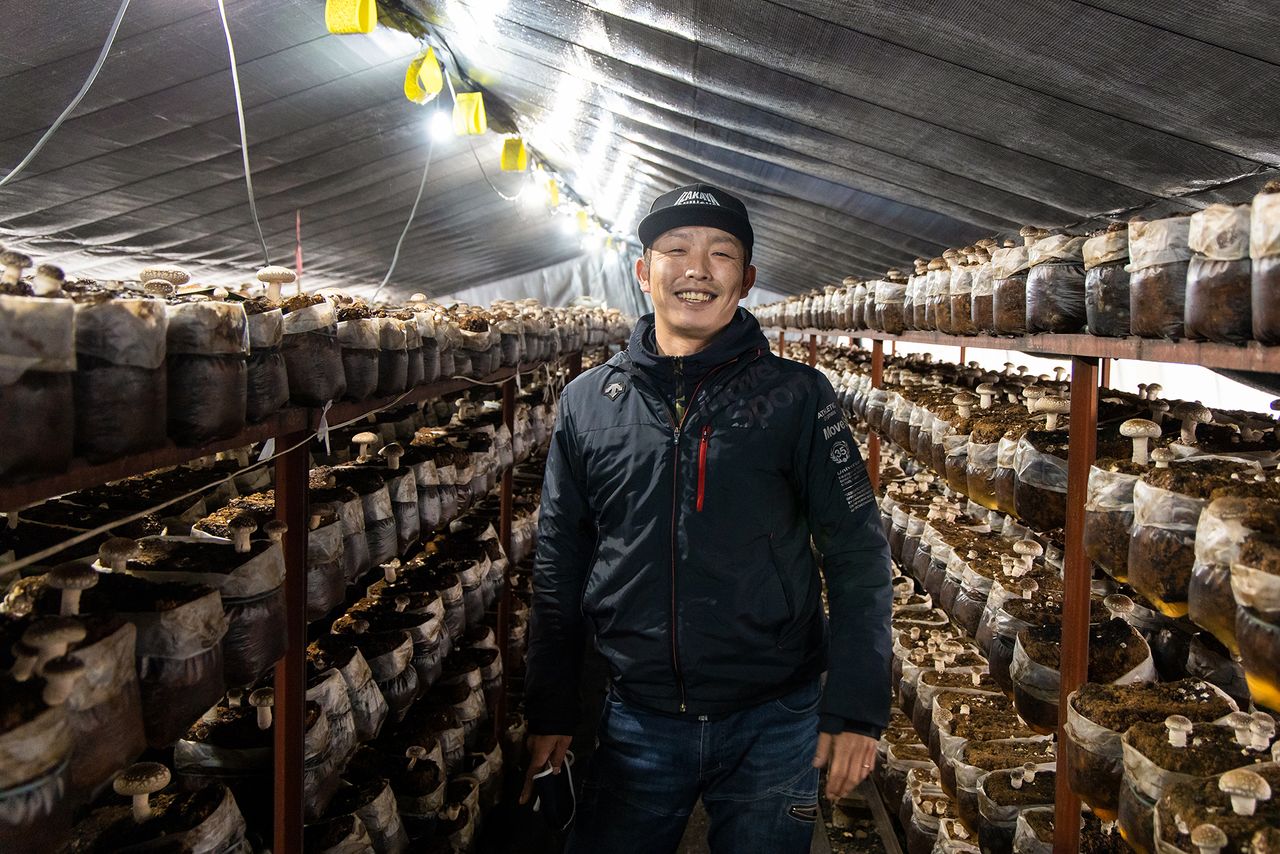 A smiling Ogura surrounded by a crop of shiitake.

Ogura admits that mushroom farming is an unusual career choice for him considering that as a child he disliked the shiitake that his father grew. In those days, the mushrooms were typically cultivated by inserting plugs of starter culture into short logs. The resulting shiitake had a pungent smell and strong, earthy taste that the young Ogura found unbearable.

In 2004, members of the farming cooperative tossed the logs aside and switched to cultivating shiitake in a medium composed of sawdust and rice bran mixed with various nutrients. Ogura, a former office worker, took over the family farm in 2010. Having failed to get over his childhood aversion to shiitake, he set out to grow a milder-tasting variety. He claims that shiitake cultivated in growing medium have a mellower taste, adding that “mine have an especially mild flavor thanks to the region’s clean air and fresh water.”

Fine tuning his growing medium every year, Ogura carefully cultivates some 30,000 shiitake over two months in winter, when cold weather reduces the risk of harmful bacteria damaging his crop. He is assiduous in his approach, carefully regulating the environment of the growing sheds and warily avoiding jostling the racks of mushrooms. To avoid overcrowding, he keeps the number of shiitake per growing bed to around half of capacity. He is a firm believer that the stress-free environment helps the mushroom grow faster and develop large, thick caps and sturdy stems. 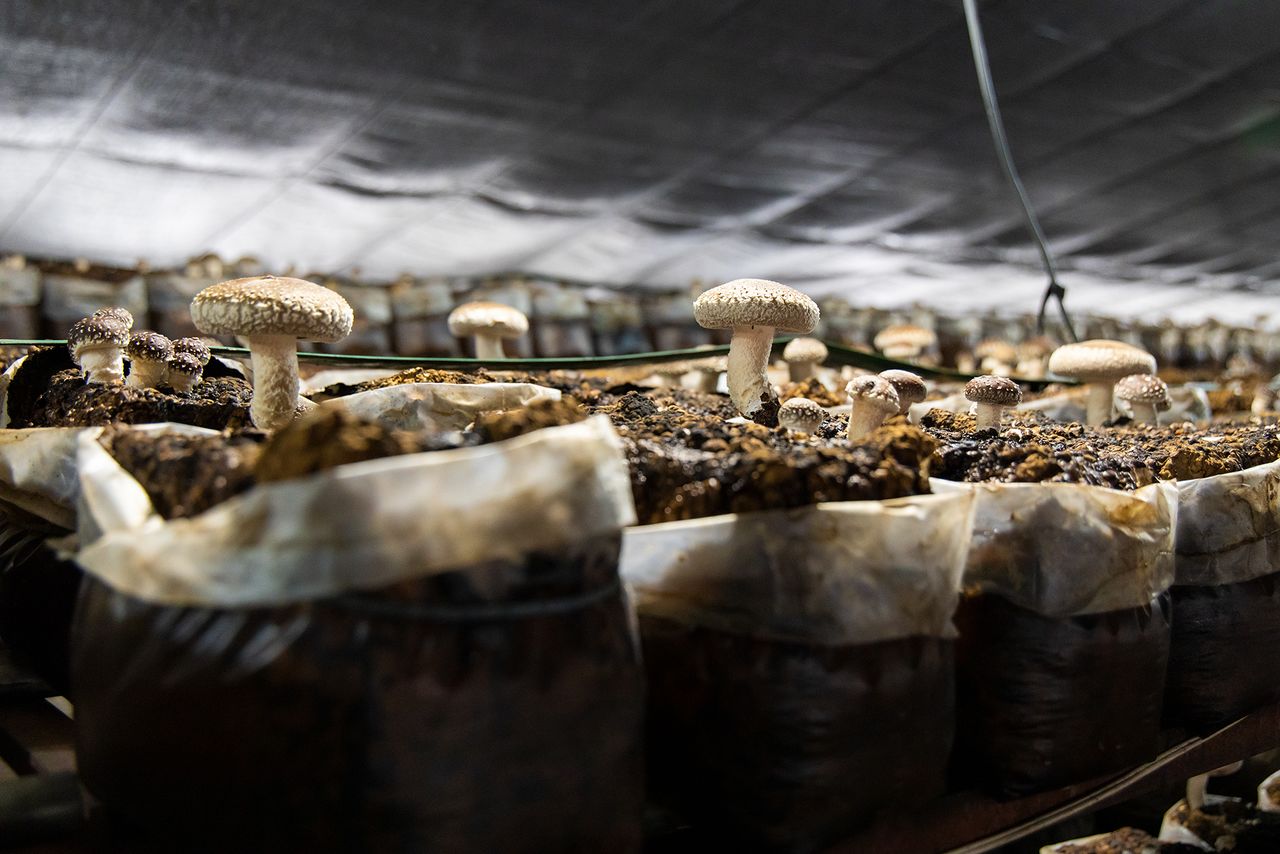 Protected from the elements, Ogura’s shiitake thrive in a controlled growing environment.

Like many other Fukushima farmers, Ogura’s business was seriously affected by the Great East Japan Earthquake. The massive temblor sent his mushroom beds, full of freshly-made growing medium, crashing to the floor. He spent three long, bleary-eyed days putting them back into place, only to have to dispose of his entire crop after the meltdown at the Fukushima Daiichi Nuclear Power Station.

In the wake of the accident, his sales plummeted due to consumer concerns over the safety of produce from the prefecture. It was at this time that Ogura changed the cooperative’s business approach, resolving to concentrate on growing shiitake notable for their size. Although he was unsure if his plan would succeed, amid the uncertainty following the disaster, it provided a clear goal to work toward.

It was during this period that Ogura met restaurateur and entrepreneur Shinohara Yūtarō, who helped him recognize the real value of his shiitake. Shinohara got to work creating dishes showcasing the large, meaty mushrooms and also promoted the shiitake to other eateries. Aishii Family shiitake became a brand-name item. They continue to be one of the most popular products sold through Shinohara’s online shop.

Ogura says that his relationship with Shinohara has not only improved his bottom line, but has also shown him the importance of customer outreach. “Up to now, I’ve simply concentrated on growing shiitake,” he shily admits. “But with all the attention, I’ve gotten a bit better at talking with people.” On Shinohara’s advice, he started explaining to visitors who come to inspect his operation the ins and outs of his meticulous growing techniques. Customer feedback, he insists, has given him a renewed appreciation for the quality of his mushrooms. 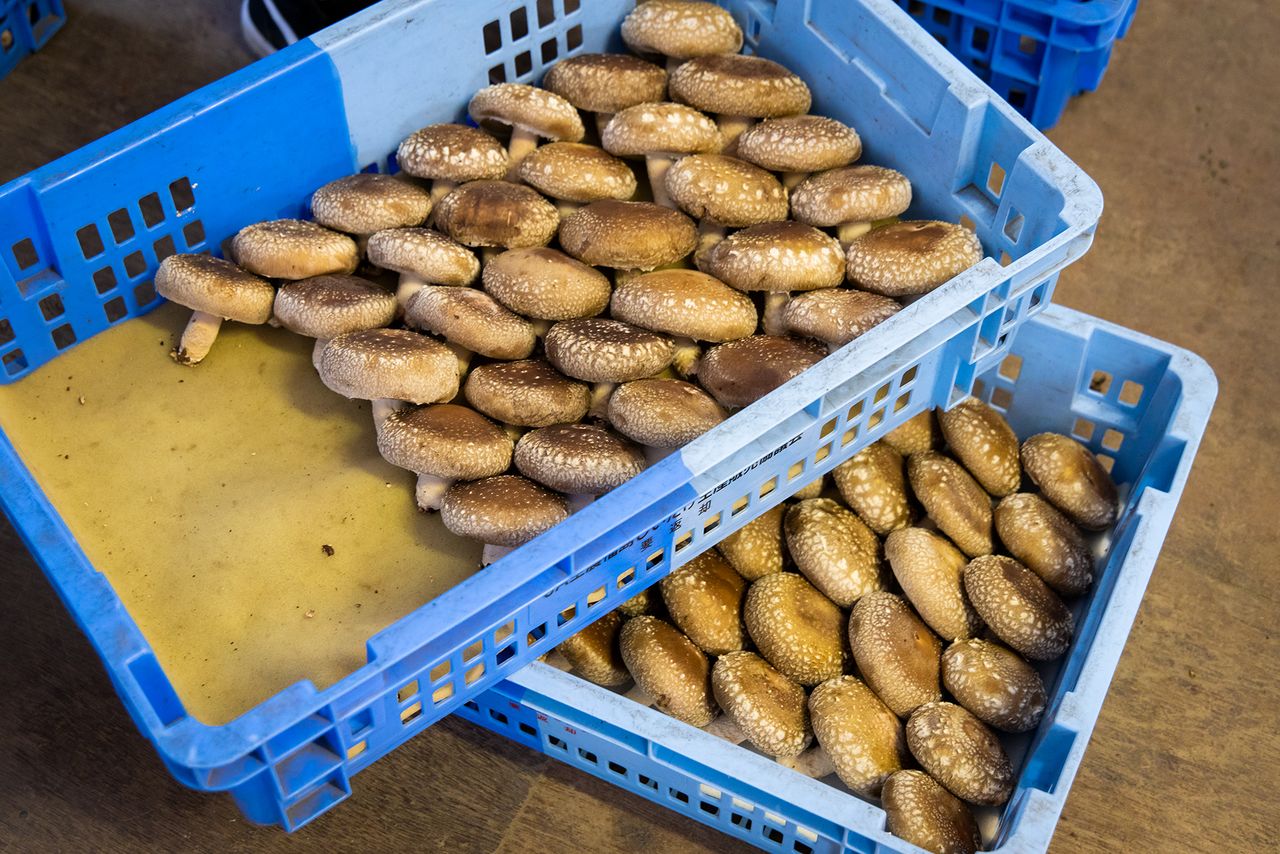 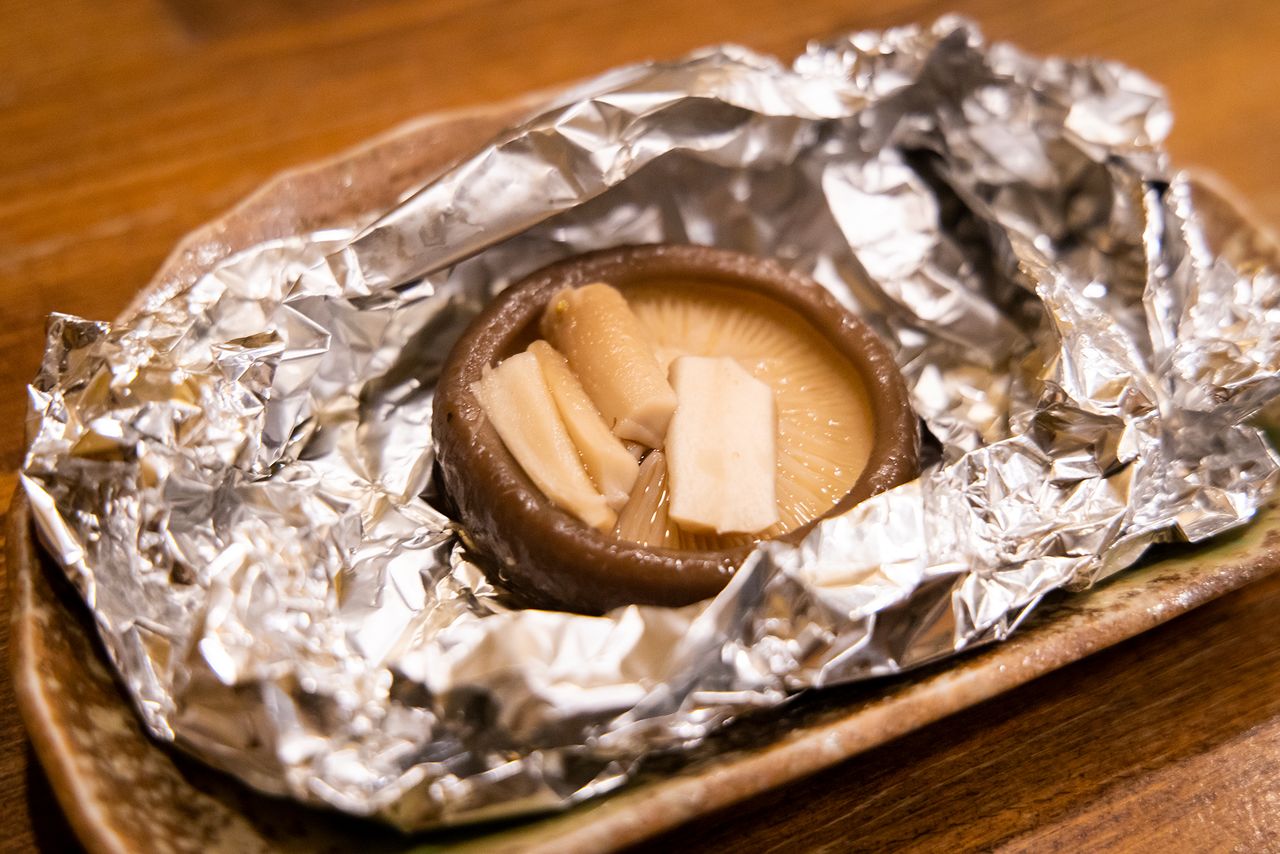 Juicy, foil-baked shiitake is a customer favorite at the Shinoya pubs.

An increasing number of restaurants in the area are making a point of using Fukushima-grown vegetables. One that has joined the trend is Italian-style farm café Arigatō, located in Kōriyama’s Asaka district.

The eye-catching blackboard atop Arigatō’s counter displays photos of the local growers who supply produce to the restaurant. The first course of the lunch table d’hôte menu features a large plate of greens, accompanied by cards describing how the vegetables are grown and their particular taste qualities. 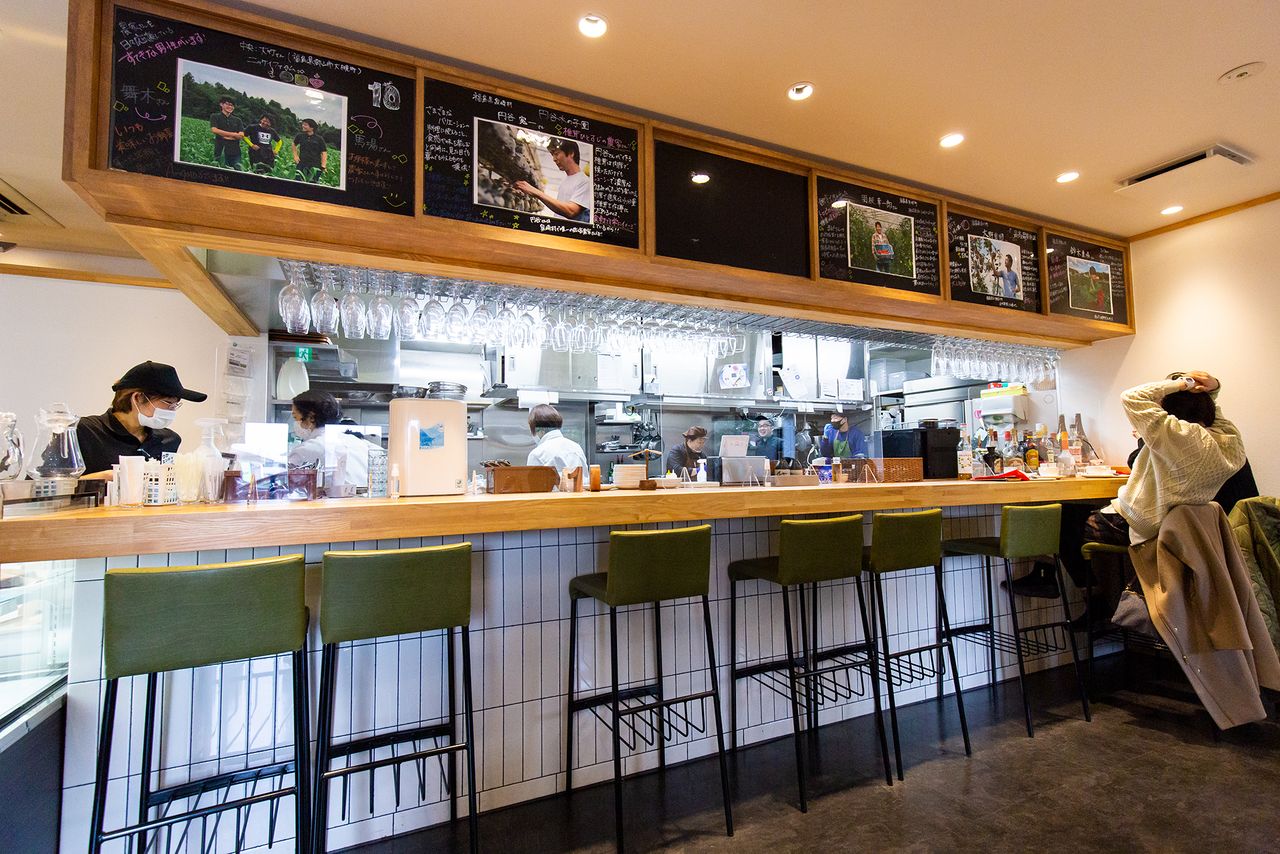 Photos atop the counter at Arigatō introducing local growers. 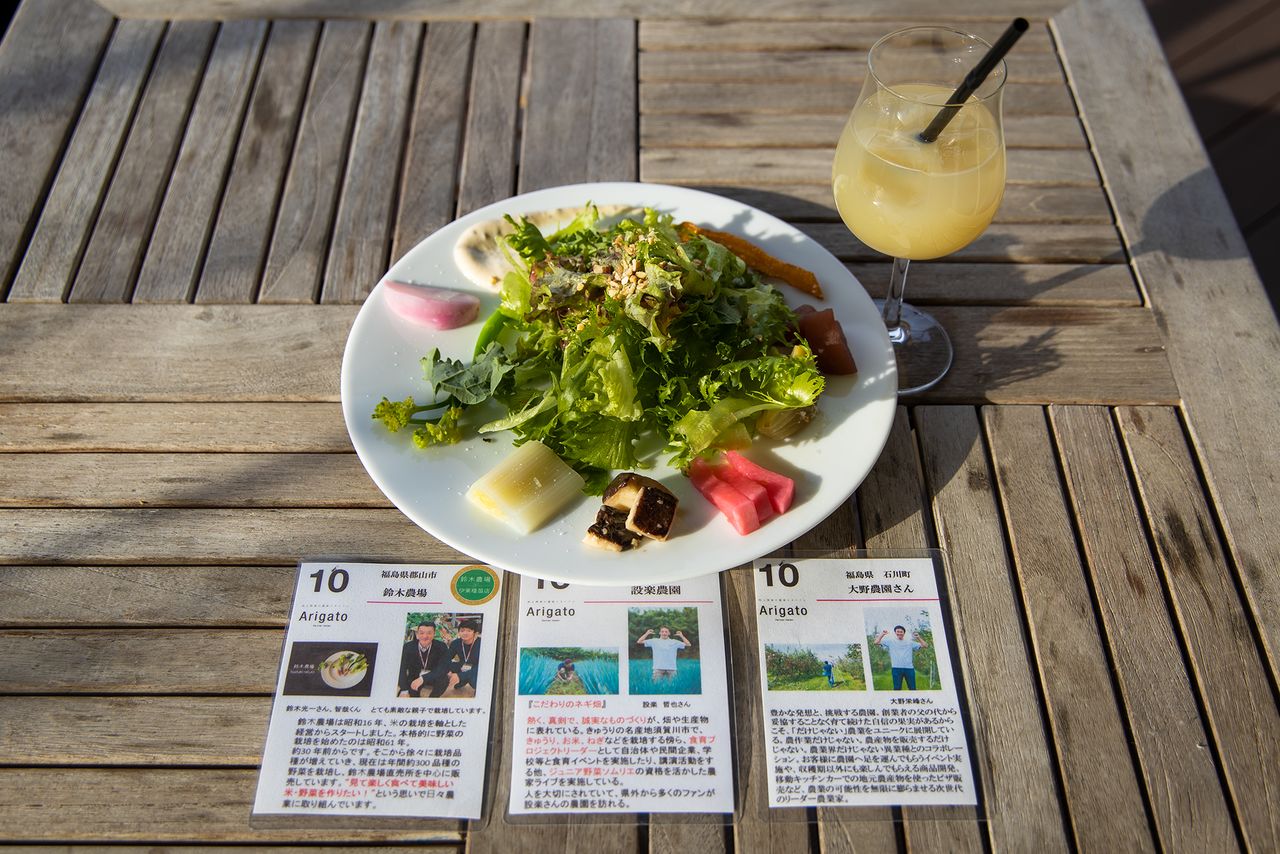 An Arigatō salad, accompanied by photo cards telling the stories behind the ingredients.

Suzuki Atsushi, a native of Shirakawa to the south, heads the company Yumenaru, which operates Arigatō and other businesses in Fukushima and Yamagata Prefectures. He opened the cafe in 2016 to support local suppliers impacted by the drop in demand following the Daiichi disaster. “I started Arigatō because I wanted to offer customers locally-grown, seasonal vegetables while also giving growers a chance to promote their produce,” he explains. “I want customers the share the pride growers have in these wonderful vegetables.”

Suzuki in his role as intermediary makes certain to pass along to farmers the delight restaurant customers take in their meals. As the name of the café implies, he hopes each arigatō (thanks) from customers will “put smiles on the growers’ faces and give meaning to their hard work.” 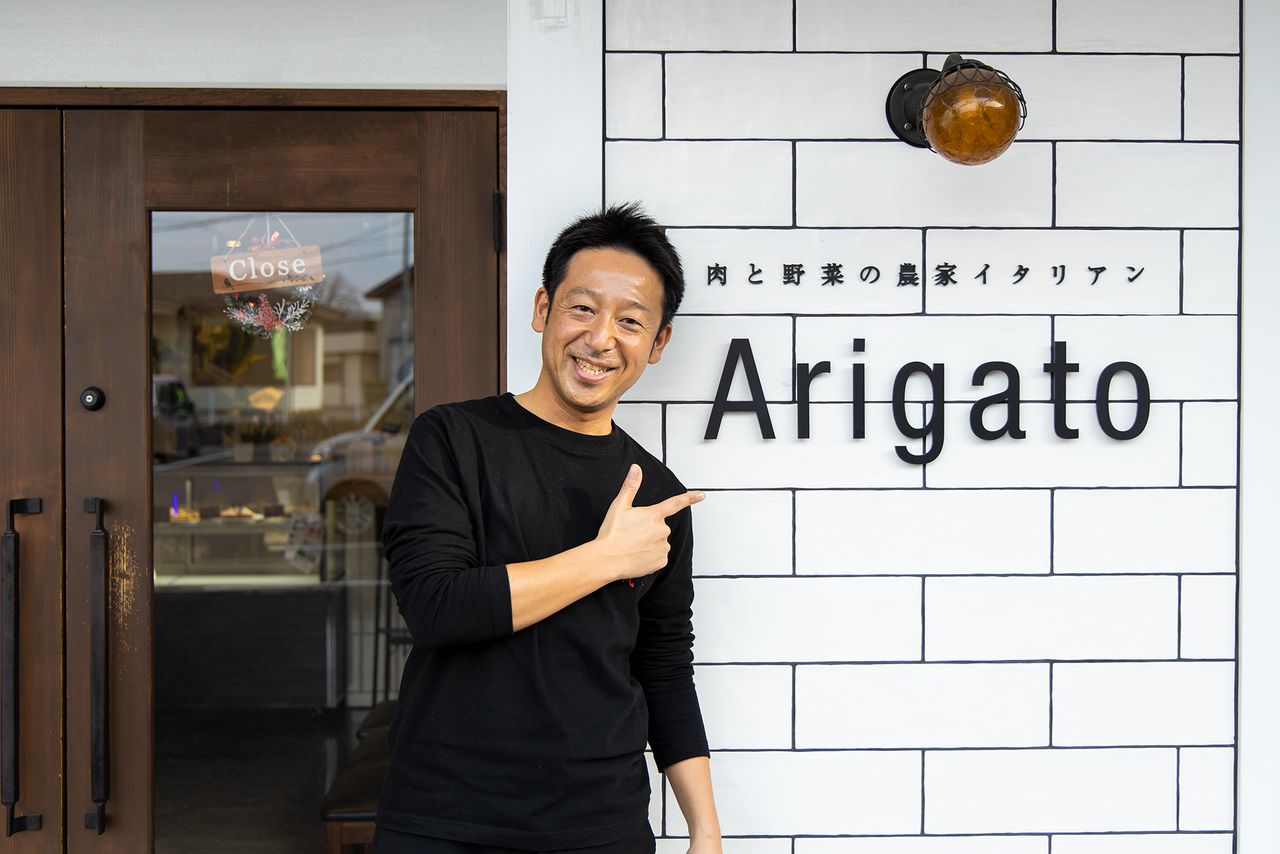 Suzuki Atsushi outside café Arigatō. He opened the restaurant with the idea of bringing happiness to Fukushima residents through cuisine. 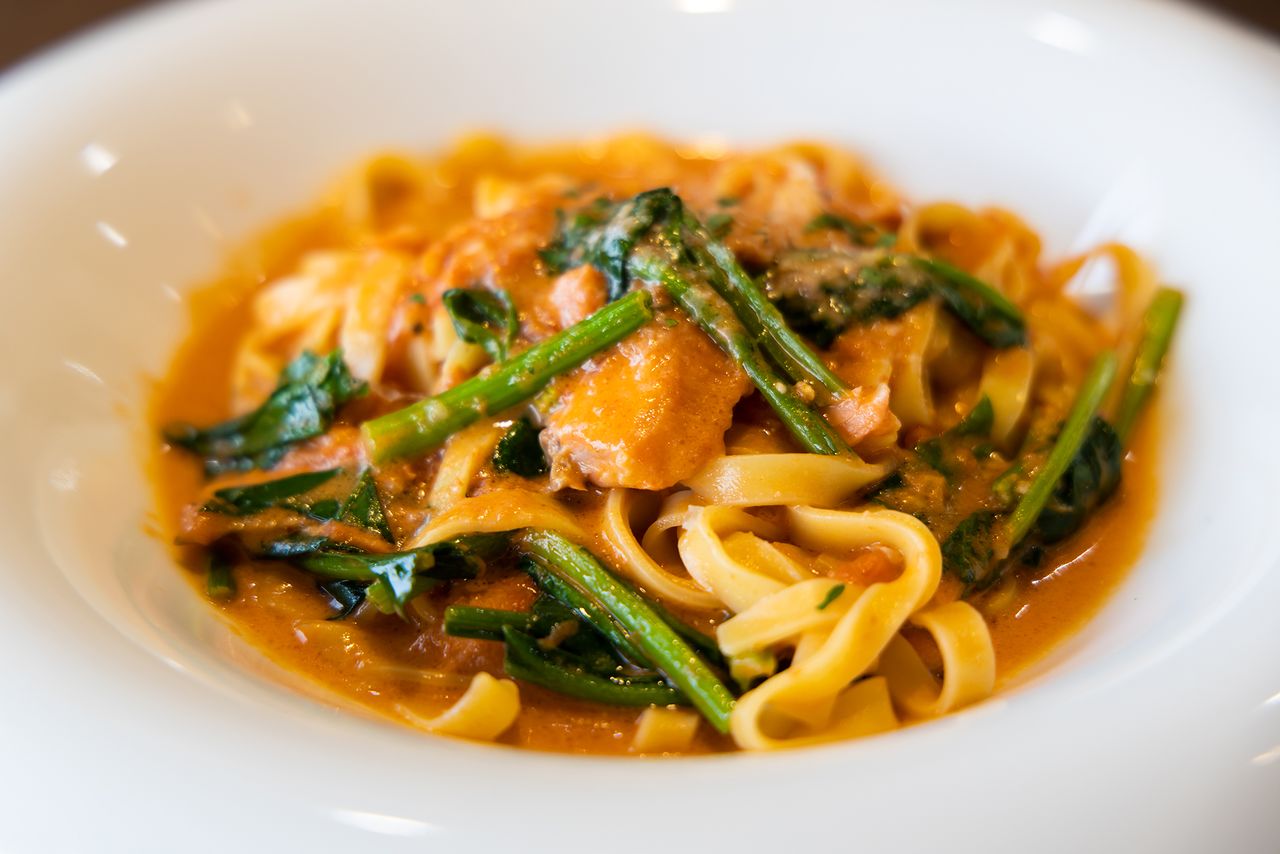 Smoked salmon and spinach in tomato cream is one of many delectable pasta dishes on the menu featuring locally sourced vegetables.

Onodera Atsushi, proprietor of farming company Agrity, is one of several Kōriyama young growers who are bringing their produce directly to diners. He is a relative newcomer to farming, having joined the industry in 2016, but already his operation includes a restaurant serving vegetables grown in his fields.

Onodera grew up in an agricultural family, but as a child he developed a strong aversion to vegetables. Even as an adult, he shunned them in just about every form, something he now ruefully admits he regrets. 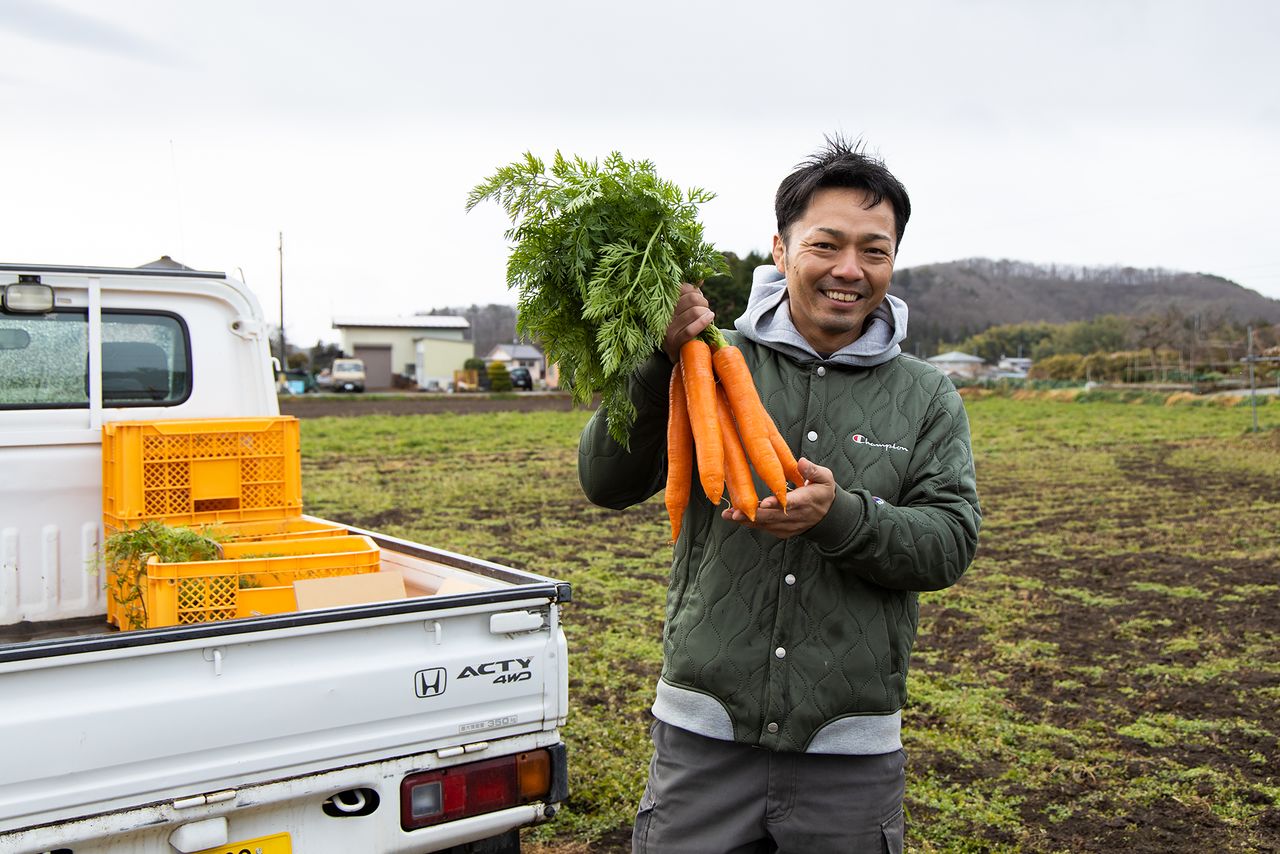 Fifteen years into his career as a company employee, Onodera says that an encounter with a Kōriyama brand of carrots, Gozen Ninjin, at a local vegetable stand was a turning point. Having received poor marks on his yearly physical exam, he decided to give them a try in a bid to improve his diet.

Biting into a carrot, the taste gave him such a thrill that he immediately got in touch with the grower, Suzuki Kōichi. This led him to learn about vegetable cultivation under the auspices of the Kōriyama Brand Vegetable Council, which Suzuki heads. 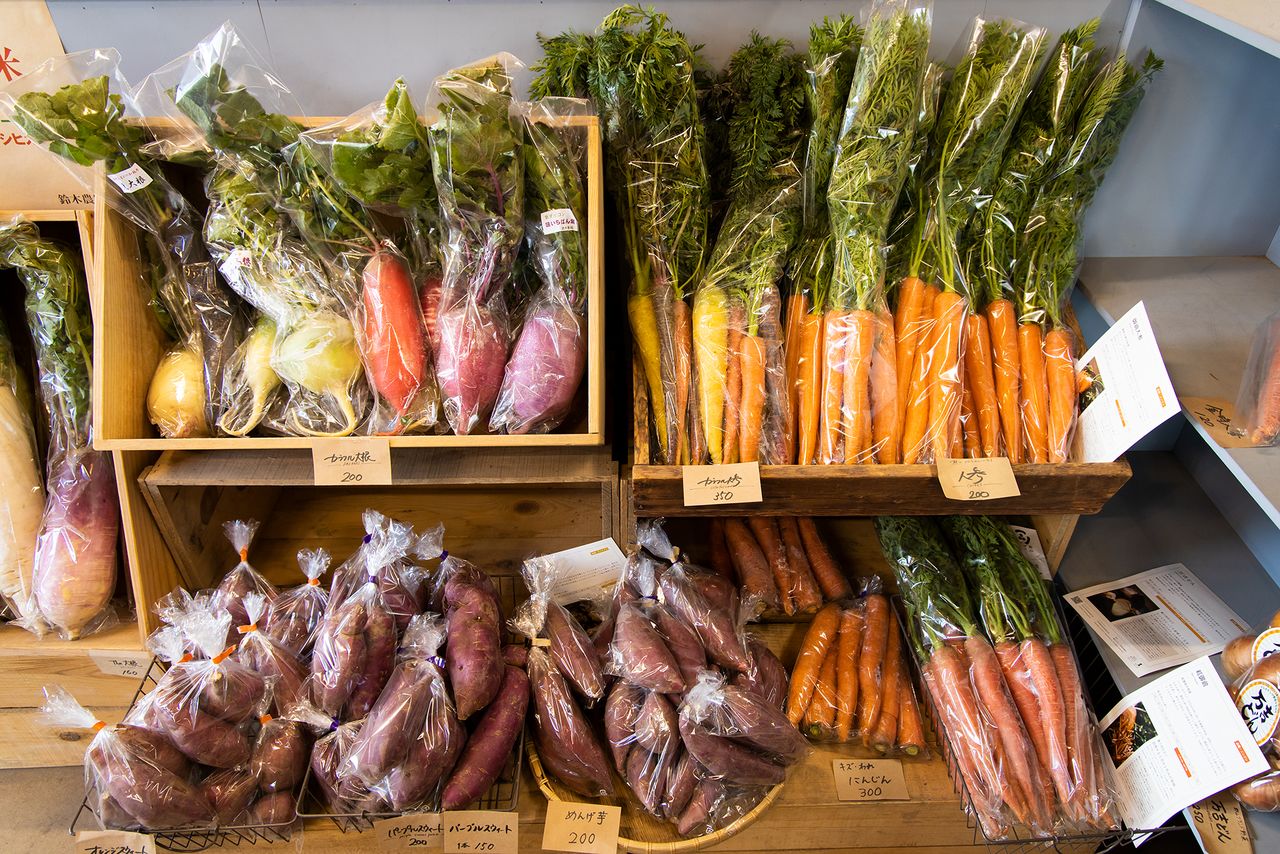 Onodera was convinced that flavorful vegetables like the carrots he had tried were sure to sell well. Although his family tried to dissuade him from farming at a time when Fukushima produce was still being shunned by many consumers, he paid no head and quit his office job anyway. Determined to restore the prefecture’s reputation for producing fine vegetables, he began learning about farming at the Kōriyama Horticultural College.

After obtaining certification as a “vegetable sommelier” and mastering techniques for creating healthy growing soil, Onodera spent a year visiting carrot farms all over the country. His dedication paid off when in 2018, just two years into farming, his summer carrots won the grand prize at a national organic vegetable fair. 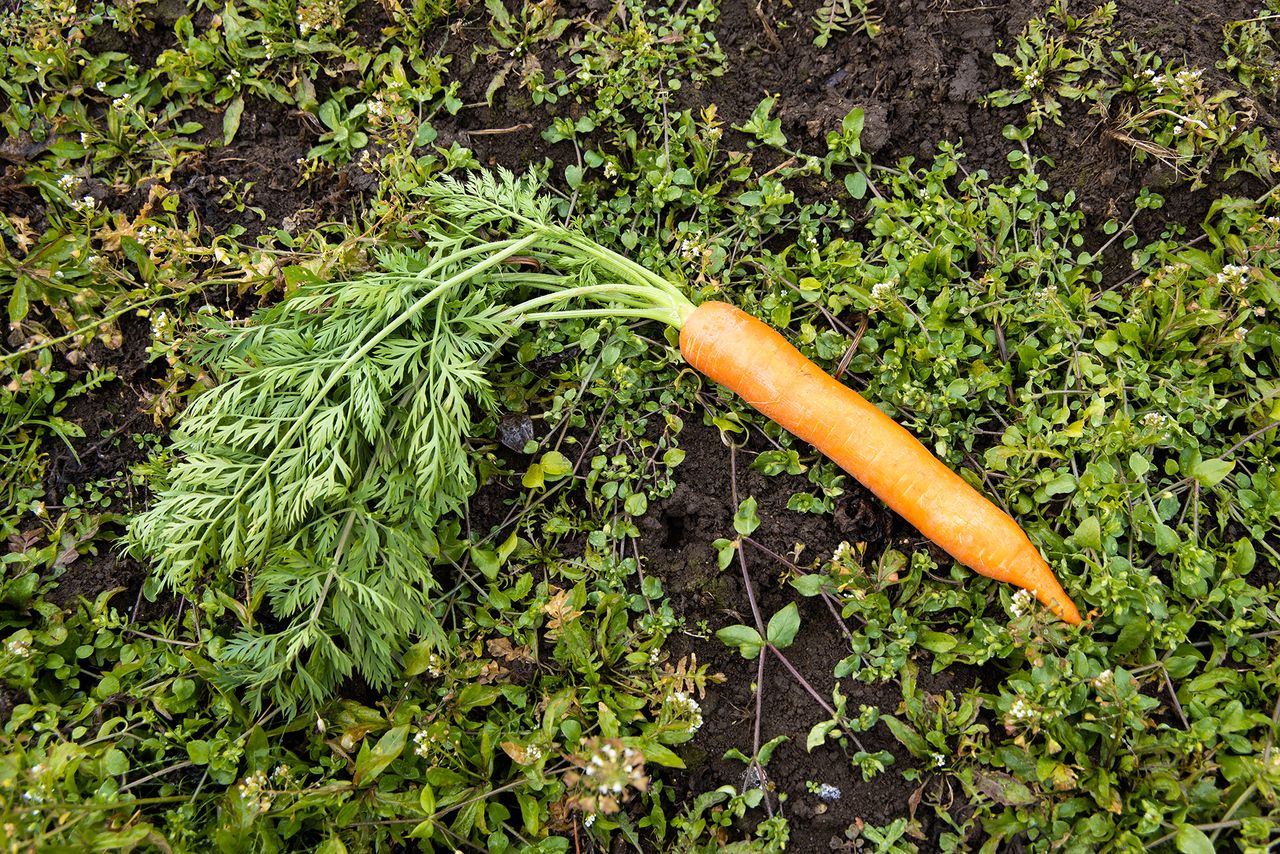 The First Ninjin variety of carrot developed by Onodera is tasty enough to appeal even to vegetable adverse children.

Onodera says that early on, he struggled to find buyers, a typical problem with organically grown produce as it is difficult to supply agreed-upon quantities on a fixed schedule. Undeterred, he applied for subsidies and set up his own vegetable restaurant, Blue Bee, in the neighboring city of Sukagawa. 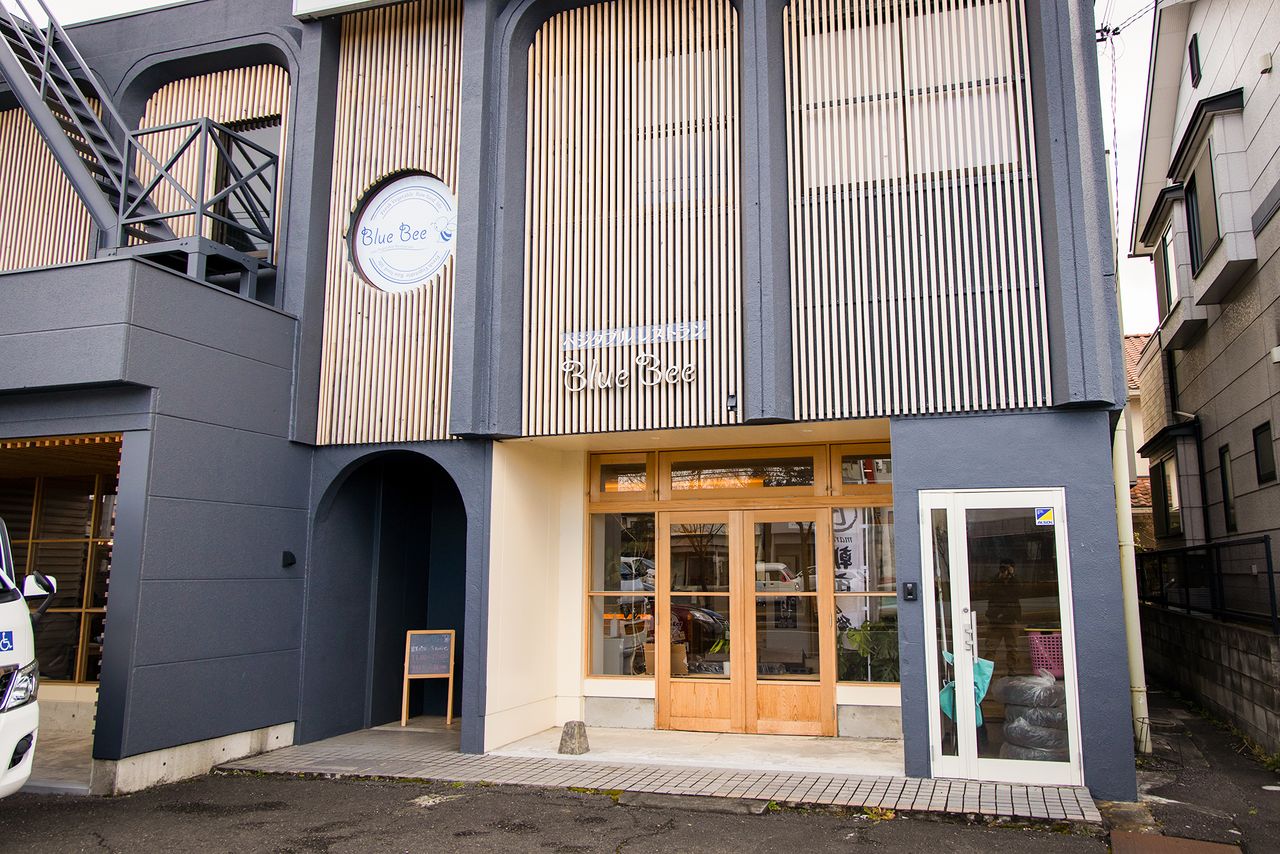 Rather than harvesting vegetables according to a set schedule, Onodera picks his crops at the peak of ripeness. He then prepares them immediately at his restaurant, where his menu offerings highlight their best qualities. He also sells his vegetables at the restaurant, offering them at prices he sets rather than a wholesaler, with all the revenue going to the business. His featured product is cold-pressed carrot juice, which he also sells online. By growing, processing, and selling his produce himself without the need of third parties for processing and marketing, he has been able to respond quickly to the shifting demands of customer.

Onodera now farms four fields, including in Sukagawa. He views his restaurant and his carrot juice production as part and parcel of farming and hopes to expand his business throughout the region.

Young growers in Kōriyama are experimenting with various ideas and working together to produce vegetables that grow well in local conditions. While growers still face consumer concerns about the safety of produce from Fukushima, many of them believe that their connections with restaurants are stronger than before the March 11 disaster. They hope that the tasty vegetables grown in Kōriyama, developed thanks to working together, will attract visitors to the area. 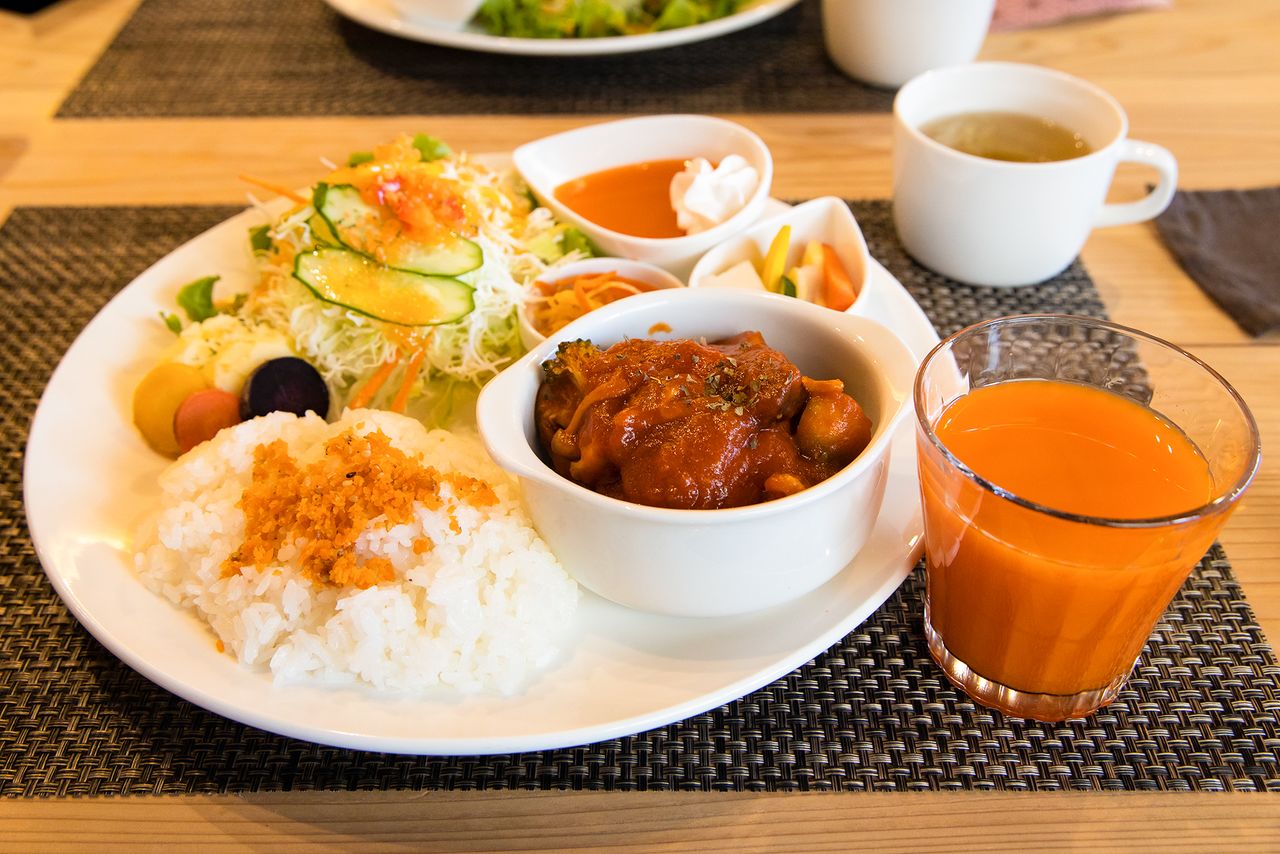 A lunch menu item at Blue Bee is chock-full of carrots and is served with pure, cold-pressed carrot juice. 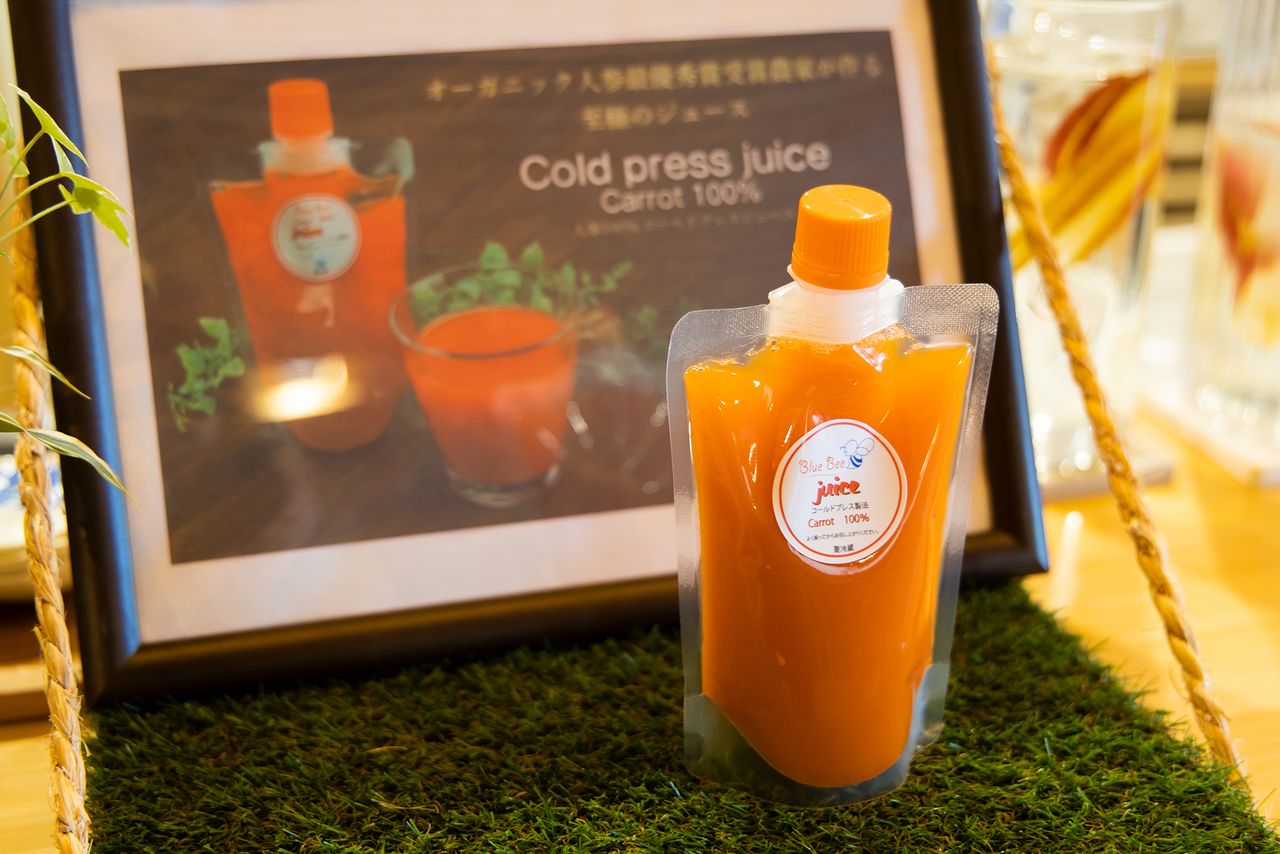