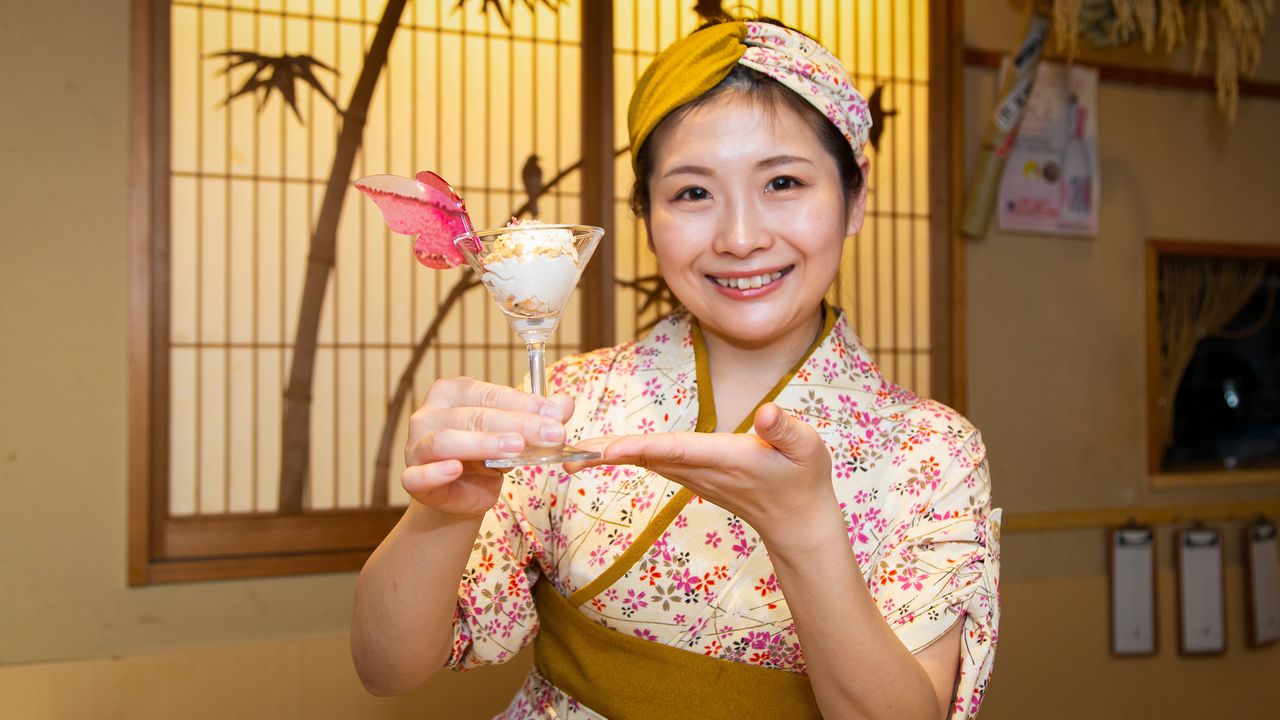 Lifestyle Economy Jul 2, 2021
Tokyo’s Toyosu wholesale market continues to languish in the COVID-19 pandemic. Especially critical is the decline in sales of top-quality food items that used to be bought by high-end sushi shops and restaurants. Creative vendors, however, are developing novel and tasty menu items made from top-flight seafood.

On April 25, four prefectures including Tokyo and Osaka, where measures to prevent the spread of COVID-19 were already in place, were put under a stricter state of emergency for the third time in response to a fourth wave of the pandemic. Once again, restaurants were pressured to either shorten their hours or temporarily close for the duration, dealing yet another heavy blow to the Toyosu wholesale seafood market in Kōtō, Tokyo.

The Toyosu wholesale market is a state-of-the-art facility, nearly twice as large as the old Tsukiji market in the neighboring city of Chūō. Expectations were high that the move to the new location would energize the seafood market, but just over a year after its opening, the market was hit hard by the COVID-19 pandemic. In 2020, the market’s marine product transaction volume was 334,000 tons, a 4% drop from the previous year; sales fell 10% to ¥358.6 billion. There seems to be no stopping the declining trend, with both volume and sales down to less than half what they were in 1990.

Transactions for January through March in the first quarter of 2021 remain somewhat lower than for the same quarter of the preceding year, and vendors are beginning to feel desperate. In this environment, Toyosu intermediary wholesalers and restaurants are trying to stimulate consumption of high-grade fish and shellfish such as high-grade bluefin tuna, for which sales are particularly difficult.

Veteran Toyosu wholesalers were taken aback when one of their comrades started selling breaded, deep-fried bluefin tuna sandwiches. This high-end tuna is a sushi delicacy. Frying such fish would cut its value in half, they cried.

This spring, Suzuki Tsutomu, the proprietor of the tuna wholesaler Suzutomi, began selling deep-fried tuna cutlet sandwiches at one of his sushi shops in Setagaya. The sandwiches are made with the fatty toro meat of bluefin tuna caught off the coast of Ireland. Considered among the best high-grade tuna available at the Toyosu market, even though frozen, the prized fish often sells for ¥5,000 or more per kilogram, prices comparable to those for the highest-quality fresh tuna. 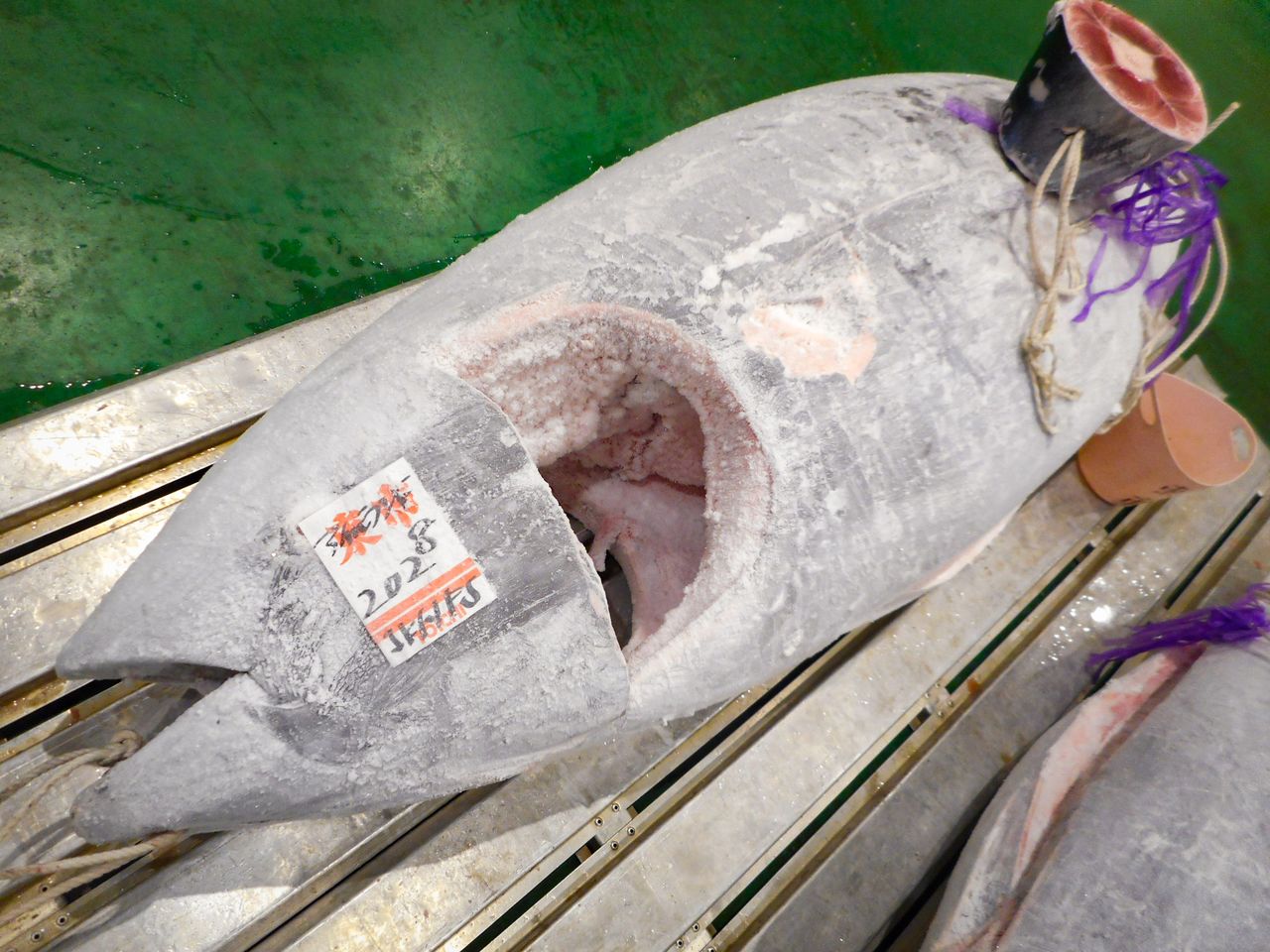 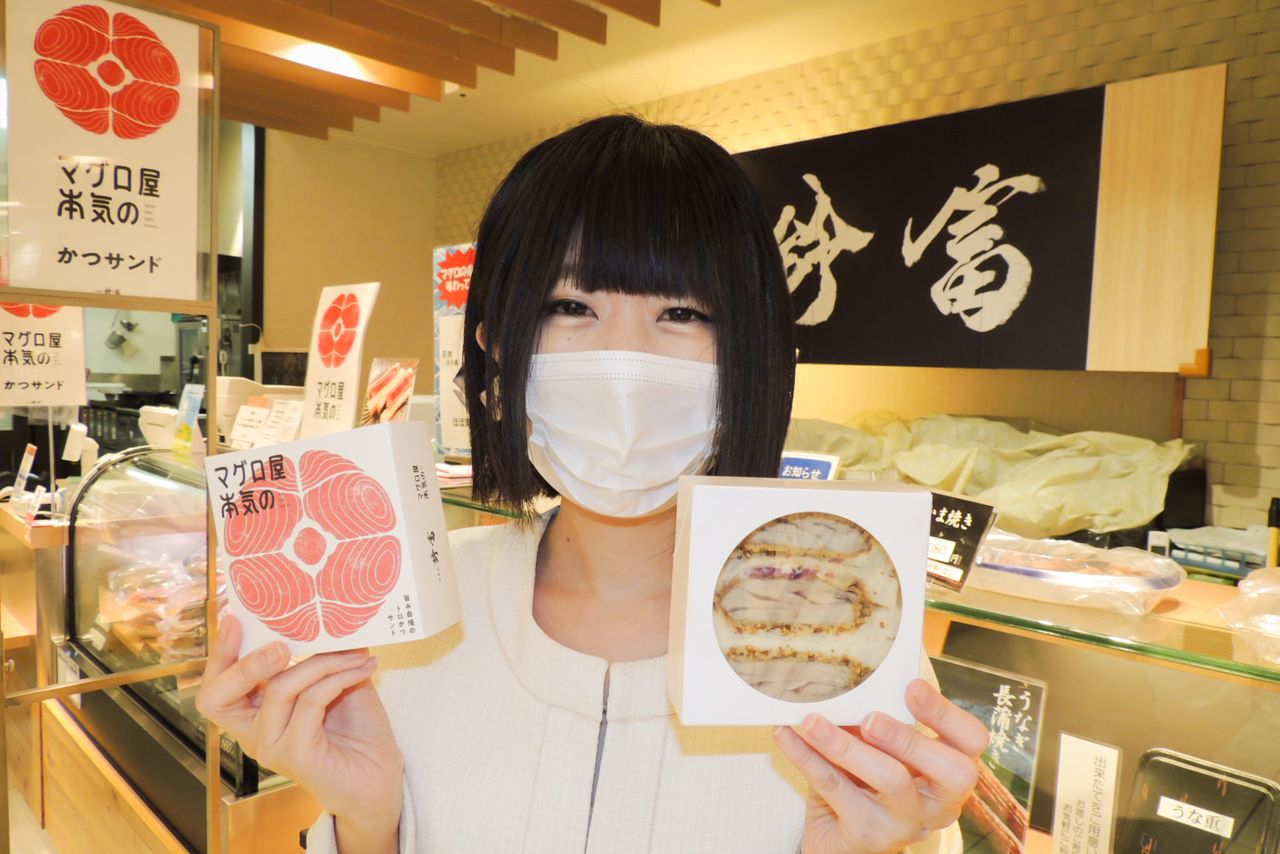 The sandwich box is illustrated with a motif of a tuna tail cross-section and labeled Maguro-ya honki no katsu sando (“a tuna dealer’s serious cutlet sandwich”). Two types are offered, one made with red tuna meat and the other with toro fatty meat, with three sandwiches per box. Each box comes with a packet of specially made sauce. The red meat “cutlets,” which are cooked rare to preserve the red color and umami flavor, are time-consuming to prepare, pushing the price up to ¥2,200 per box. The toro sandwich box is priced at ¥800. Rare and highly prized suji-toro scraped from the underbelly sinew of the fish is used for the sandwiches. “Normally, this kind of scraped toro is used to make gunkanmaki sushi rolls wrapped in dried seaweed,” says Suzutomi owner Suzuki.

As the “serious sandwich” name implies, the fish used is the highest-grade tuna caught off the coast of Ireland. Says Suzuki, “We wanted to offer a new way of eating this tuna that goes well with anything from coffee to wine.” Offered as a takeout item, the sandwiches are proving highly popular. Plans are underway to take online orders as well. 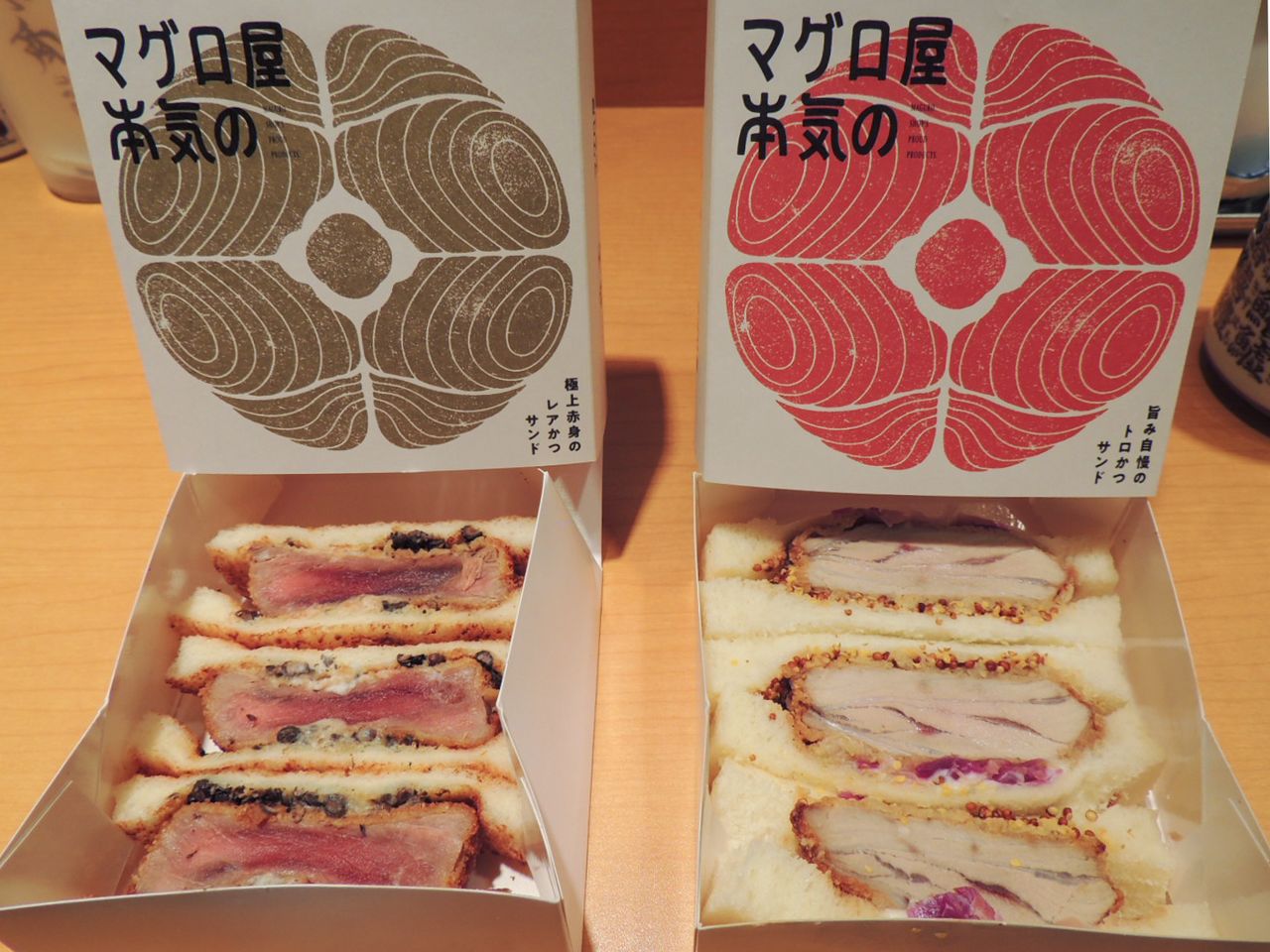 Sea Urchin in a New Confection

Uni, a high-end sushi topping second only to tuna in popularity, has also emerged as a novel ingredient appearing in places it hasn’t before. Senriken, on the third floor of the Tsukiji Outer Market, offers a luxury sea urchin pudding made of top-grade Hokkaido uni for ¥880.

The pudding consists of a steamed mix of pureed uni and egg topped with a jellied sauce made of ponzu, a tangy citrus sauce with a soy sauce base, and pieces of fresh uni. Chilling enhances the flavor and many customers enjoy it with a cup of hot coffee. 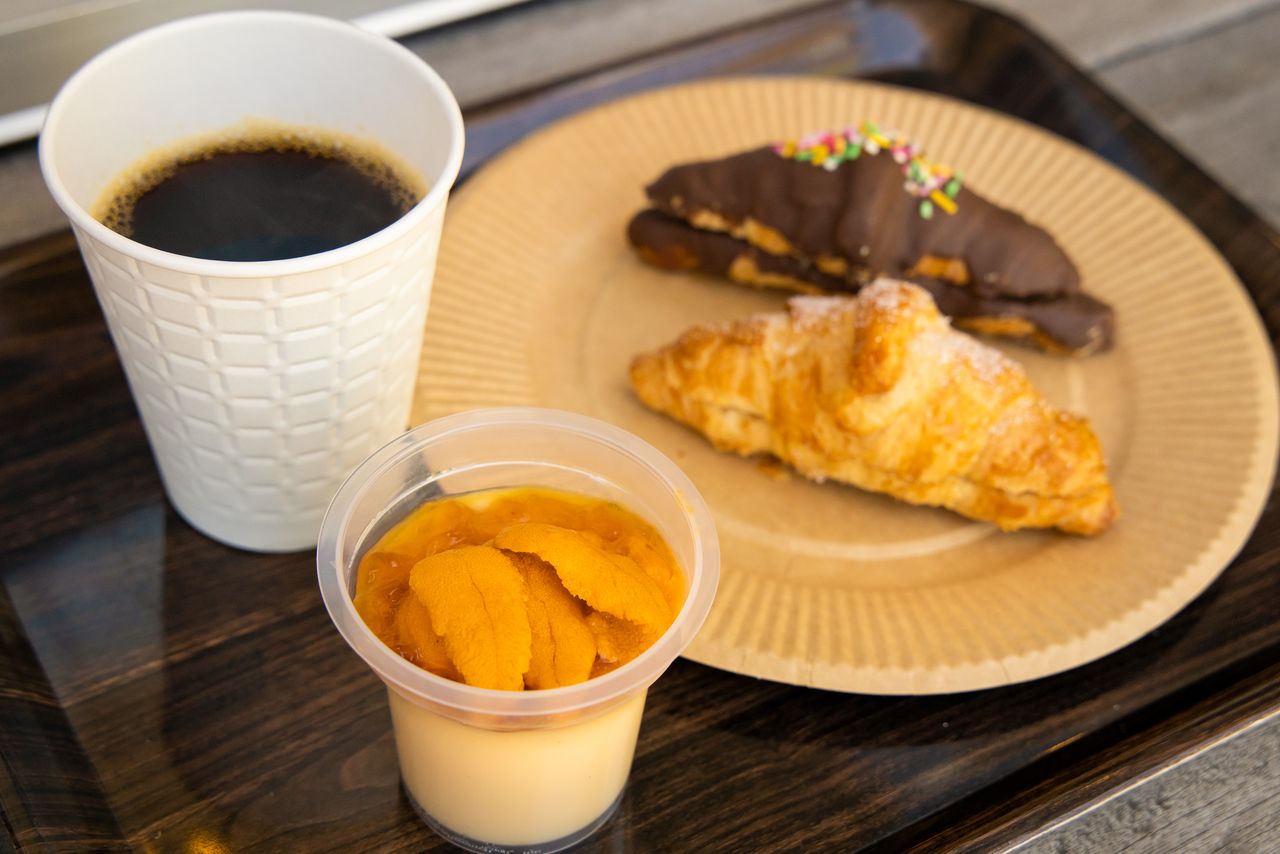 Senriken offers a number of other novel dishes that are gaining increasing popularity. One is a creamed stew of chopped sazae, turban shellfish, served in a shell for ¥1,680, and another is a pizza toast topped with shirasu boiled whitebait for ¥800.

The Tsukiji Outer Market, located next to the old wholesale market site, has continued to attract customers even after the wholesale market was moved to Toyosu, but “the pandemic is keeping people away and we need to offer novel items that will bring them back,” says Kawashima Yasuyoshi, Senriken’s owner. He is pleased with the success he has had so far and is thinking of more unusual dishes that can be made with fresh seafood brought in directly from Toyosu. 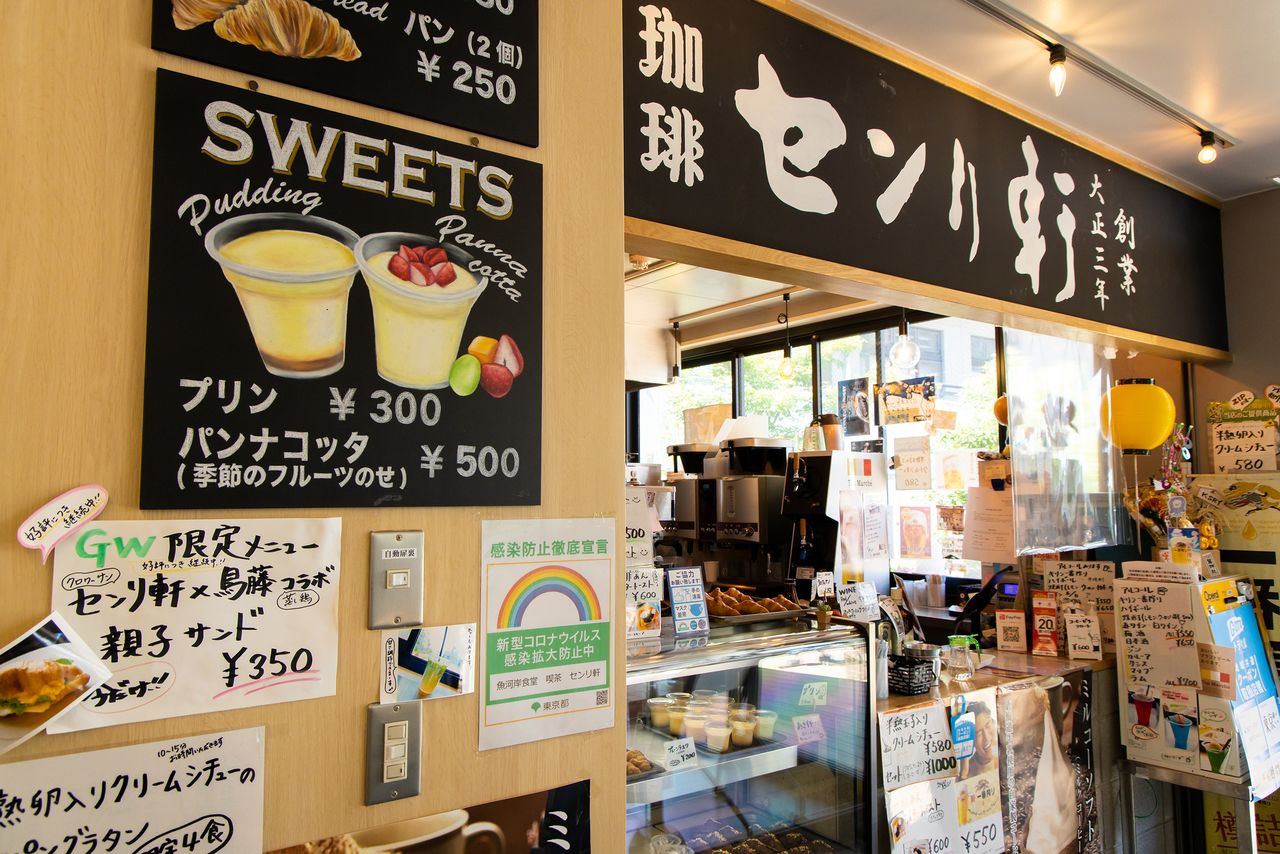 Senriken has a 100-year history. Its new uni pudding has become a leading item for the venerable shop.

Even Sea Bream, the King of Fishes, has Become a Dessert

Elsewhere, another shop has transformed high-grade madai sea bream into a fashionable dessert. Nadeshico Sushi, located near the JR Akihabara train station in an area popular with anime and idol fans, offers top-grade Hakuju Madai red sea bream not only as a sushi topping but also as an ingredient for a novel dessert.

Hakuju Madai is the brand name of a type of farmed sea bream cultivated in Ehime Prefecture. The fish is raised on a special feed made from white sesame, ensuring that it is rich in sesamin, known for its high antioxidant effect. This keeps the fish fresh and flavorful. The brand is popular among the Toyosu intermediary wholesalers. 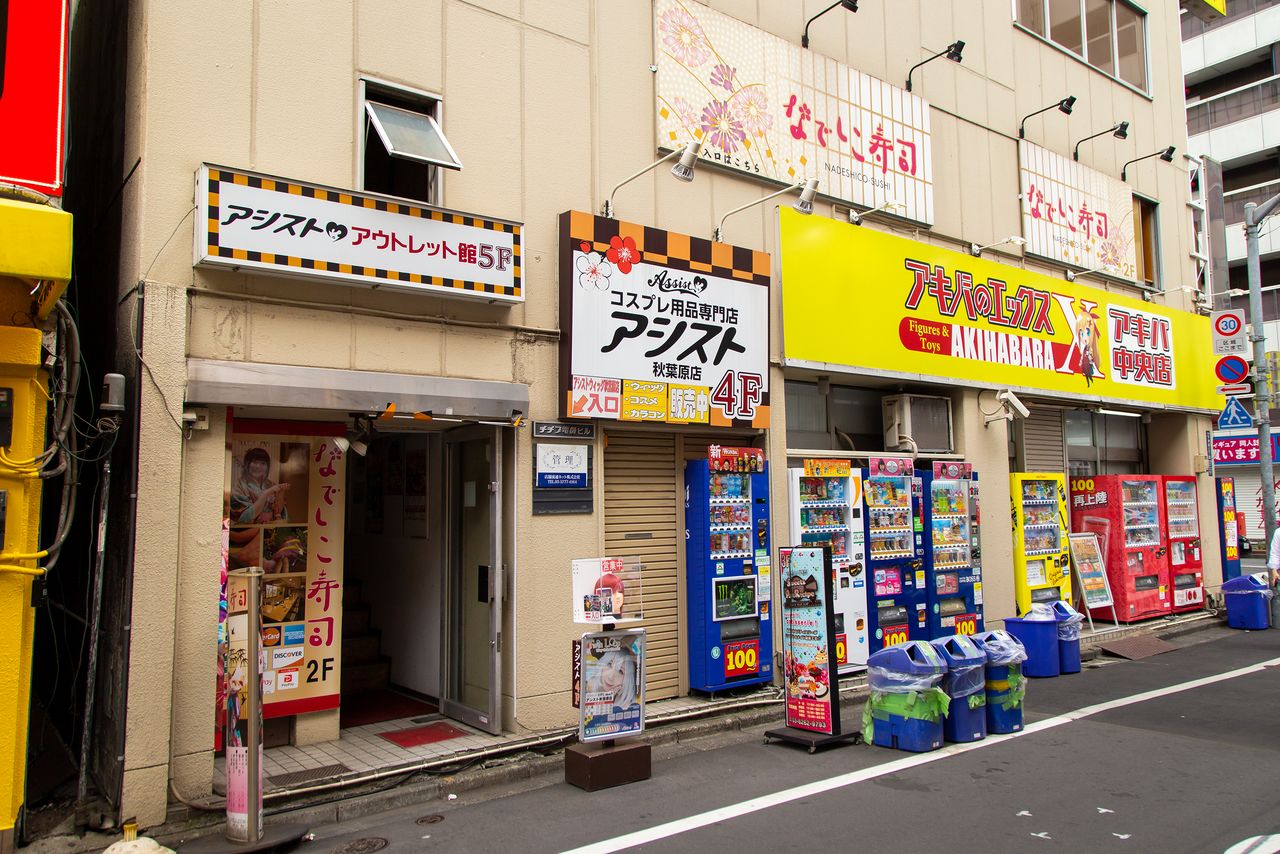 Nadeshico Sushi is a short walk from the JR Akihabara Station, tucked in among the electronics shops and maid cafes for which the area is famous. 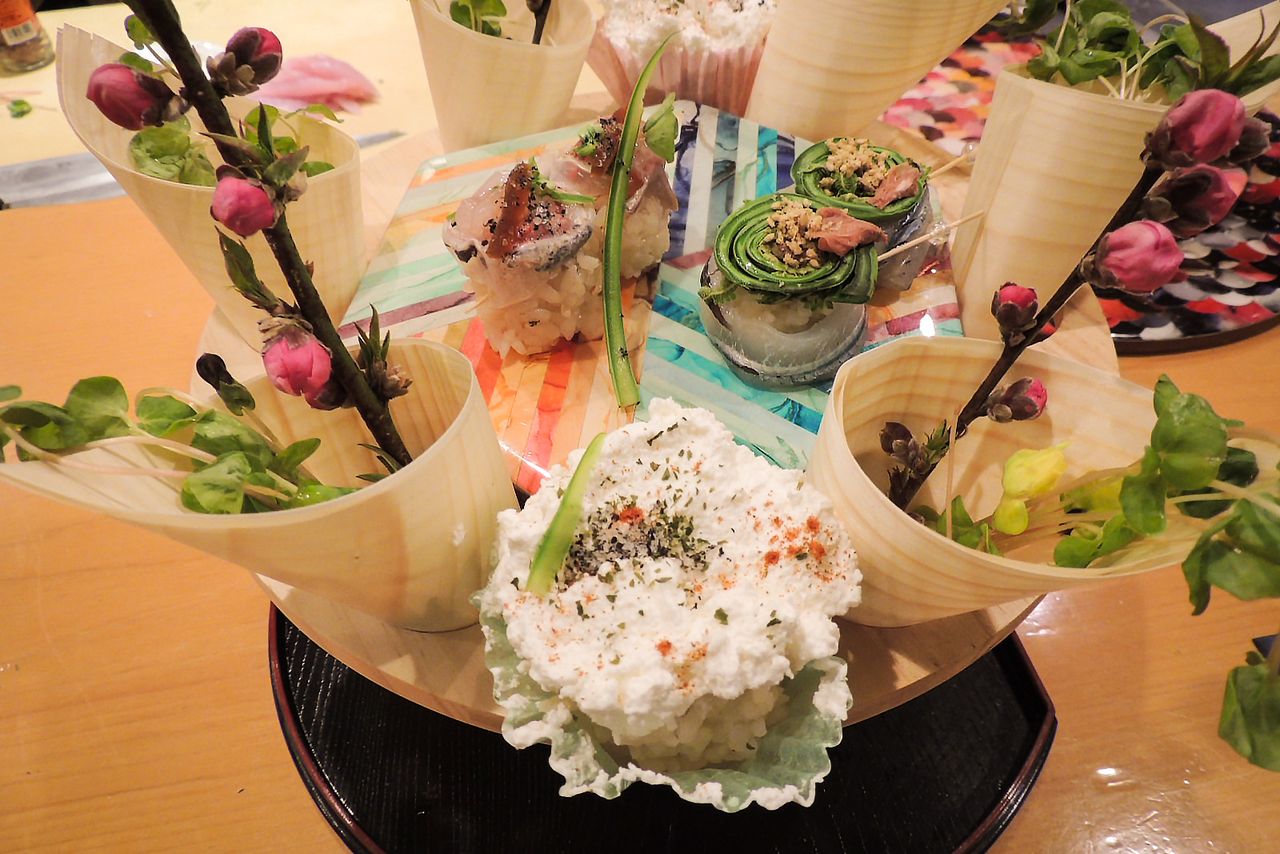 Nadeshico Sushi uses Hakuju Madai sea bream as an ingredient in several of its creative sushi offerings, and also serves it as an ingredient in a creamy mousse-like dessert made with whipped fresh cream, soy milk, and olive oil. The sweetness of the dessert is adjusted to harmonize with the customer’s meal. The novel dessert is proving to be popular. Says Chizui Yuki, the Nadeshico Sushi manager, “Roughly 60 to 70 percent of our customers before the pandemic were tourists from overseas, so we’re really struggling right now. Still, this has given us time to think of new menu offerings and to set up a system for online orders.”

With the emergence of new variants of the coronavirus, it is hard to predict how the pandemic will turn out. Despite this uncertainty, Toyosu’s intermediary wholesalers and Tokyo’s restaurants remain unfazed as they work hard to find new, tasty ways to prepare the fresh seafood brought in from inside and outside Japan so that it will reach as many plates as possible. 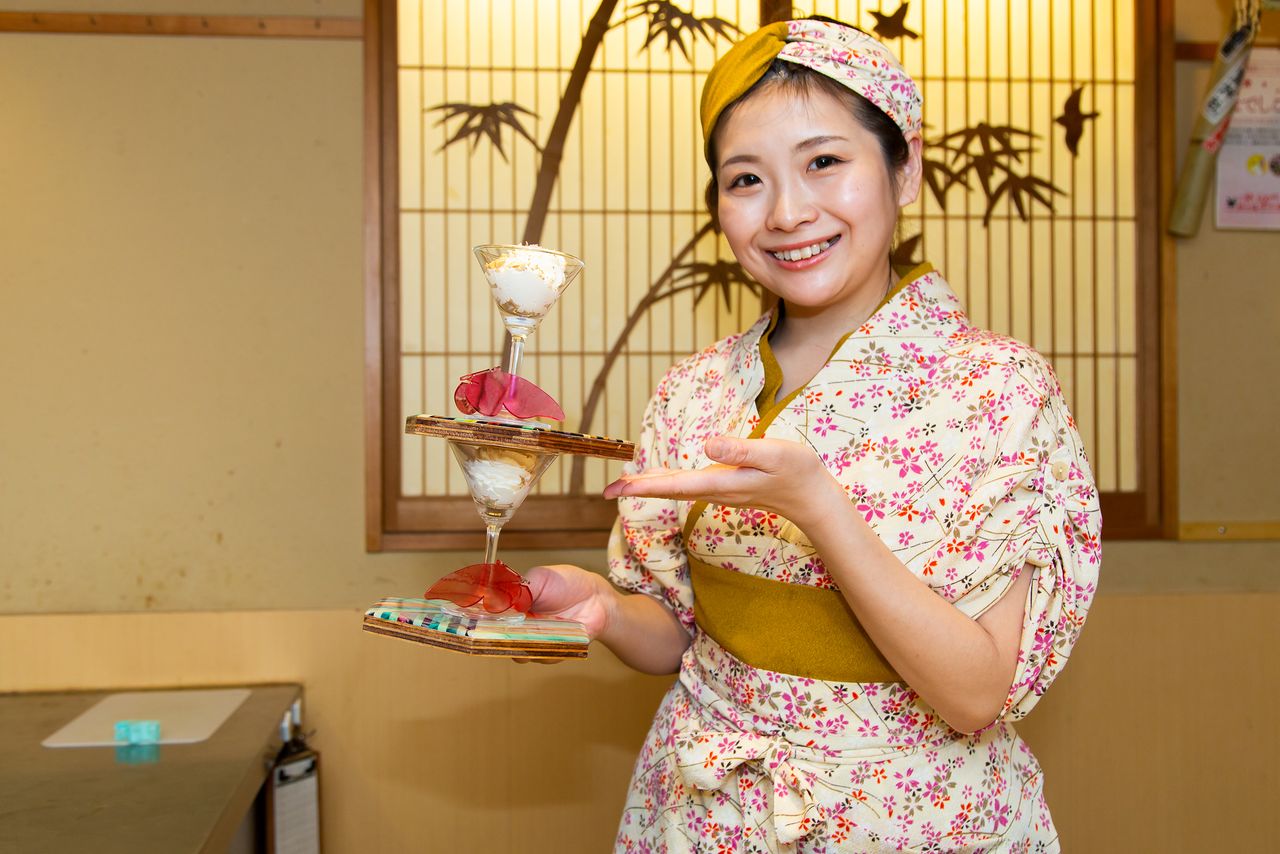 Nadeshico Sushi manager Chizui, the creator of the novel fish-based creamy dessert, is one of Japan’s rare female sushi masters. 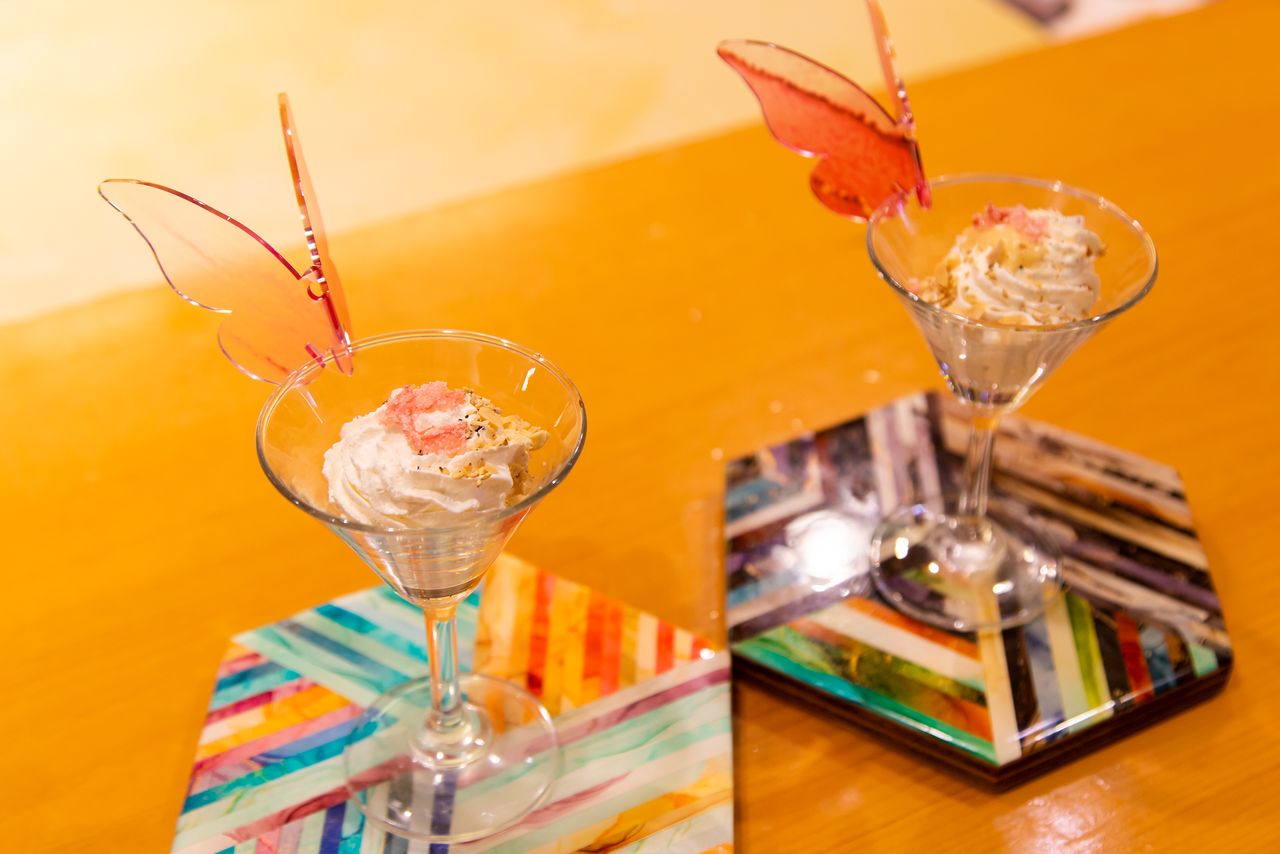 Nadeshico Sushi’s attractive servings of its new confection. Unfortunately, the shop is temporarily closed for the duration of the current state of emergency.