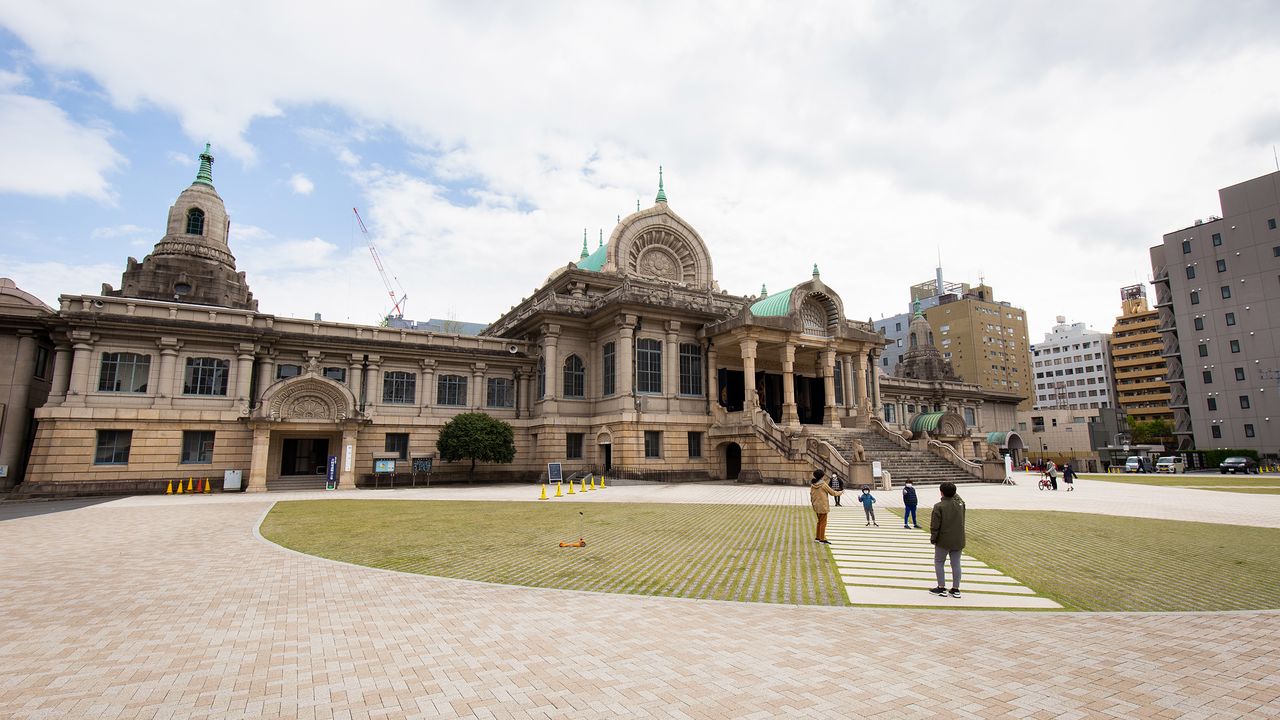 Tokyo’s Tsukiji Honganji: A Historic Temple in the Modern Age

Travel History Food and Drink Architecture Aug 6, 2021
Billing itself as an “open” temple, Tsukiji Honganji in Chūō, Tokyo, is a fascinating blend of traditional and contemporary. Founded in the earliest days of the capital, it has long served followers of Jōdo Shinshū. Visitors today can also sample secular delights at a fashionable café and browse titles at a well-stocked bookstore. The ornate main hall was designed by celebrated architect Itō Chūta.

Tsukiji is home to Tokyo’s world-famous wholesale market. But just a few blocks over from the celebrated site is one of the neighborhood’s other great attractions, the Buddhist temple Tsukiji Honganji. A centuries-old center of Jōdo Shinshū worship, it boasts an immense and conspicuously designed main hall, the creation of one of Japan’s most well-known architects, as well as an invitingly open atmosphere with a number of shops offering visitors decidedly secular attractions to please the taste buds and enrich the soul.

Tsukiji Back in the Spotlight

The history of Tsukiji Honganji is almost as old as that of Tokyo. It was established in the Japanese capital, then known as Edo, in 1617 as a branch of Kyoto’s powerful Nishi Honganji, the main temple of the True Pure Land Buddhism school founded by influential monk Shinran (1173–1263). It originally stood in the Nihonbashi neighborhood, but in 1657, it burned to the ground along with large swathes of the city in what is known as the Great Fire of Meireki. It was rebuilt at its present location atop what was then newly converted wetland (the name Tsukiji means something like “reclaimed land”).

In 1923, the temple was again reduced to ashes, this time in the massive conflagration that swept across Tokyo following the Great Kantō Earthquake. The head of the Nishi Honganji sect of Jōdo Shinshū at the time, Ōtani Kōzui, was deeply intrigued by Buddhism’s spread along the Silk Road and other routes and turned to acclaimed scholar and architect Itō Chūta (1867–1954) to design the hondō, or main hall. Itō shared Ōtani’s interest in ancient Buddhism and had travelled widely in Asia studying the architectural influence of the religion. When the temple was finished in 1934, it was like nothing ever seen before, containing elements borrowed from such far-flung cultures as India, Turkey, and China, along with Western religions.

In the subsequent years, Tsukiji Honganji has remained off the beaten path. In fact, the surrounding area continued to be something of a Tokyo backwater until the 1980s, when the sprawling Tsukiji Wholesale Market began to draw vast crowds for its enormous selection of fresh seafood and other culinary delights. Its tourist appeal was also enhanced by its proximity to the department stores and ritzy boutiques of Ginza and the celebrated Kabukiza theater.

Most visitors, however, paid little if any attention to Tsukiji Honganji, which often failed to get even a passing mention in travel guides despite its status as a National Important Cultural Property. This was in part due to the temple’s hushed confines, which starkly contrasted with the bustling atmosphere of the market. Tsukiji residents also paid it little heed, diminishing its presence even further. 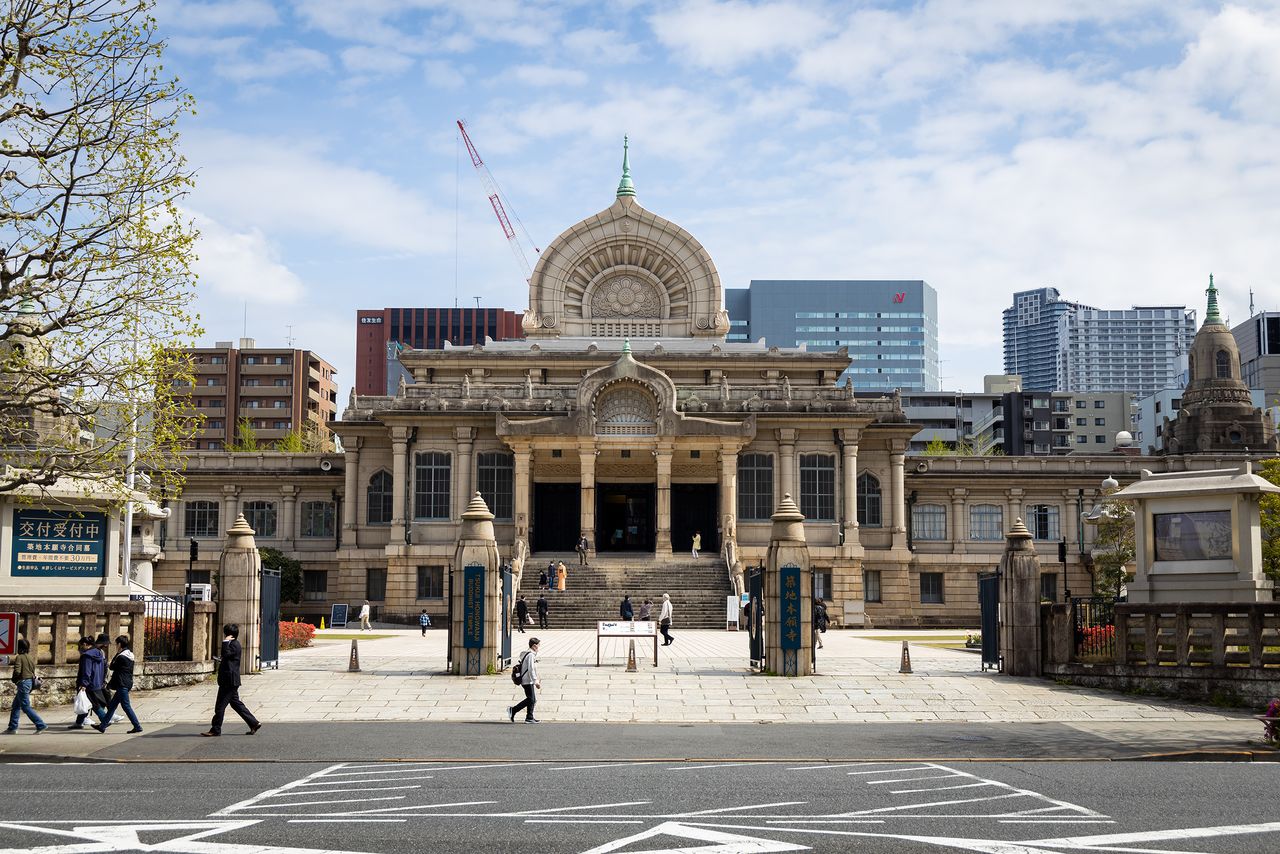 Tsukiji Honganji. The main gate of the temple originally stood on the same side as the Tsukiji market, but was rebuilt facing westward toward Nishi Honganji in Kyoto, and India further beyond.

Priest Higashimori Shōnin, who helps look after the temple’s business operations, admits that Tsukiji Honganji had allowed itself to become overly insular and haughty. “Even locals found it stuffy and stayed away,” he says. “A temple should be an open, inviting place, but somewhere along the way this was forgotten.” He says efforts are underway to remedy the situation, including working together with the Tsukiji Outer Market and other local businesses and organizations. “We want people from all walks of life to feel they are welcome here.”

In 2015, Yasunaga Yūgen took over as head of Tsukiji Honganji. A former banker and business consultant turned Buddhist priest, he set out to reform the temple to make it more open to the public. One of the first steps was to declutter the confines. The overgrown trees and shrubs along the outer wall were removed, letting in more light, and the parking area in front of the hondō was relocated and the space converted into a plaza. A café with outdoor seating was also built, as was a new bookstore.

The temple’s new look was a hit with locals and tourists alike. Today, office workers and schoolchildren pass through the confines on their way to and from their destinations, and shoppers and visitors to the outer market can be found lining up to enjoy breakfast at Tsumugi, the temple’s café. 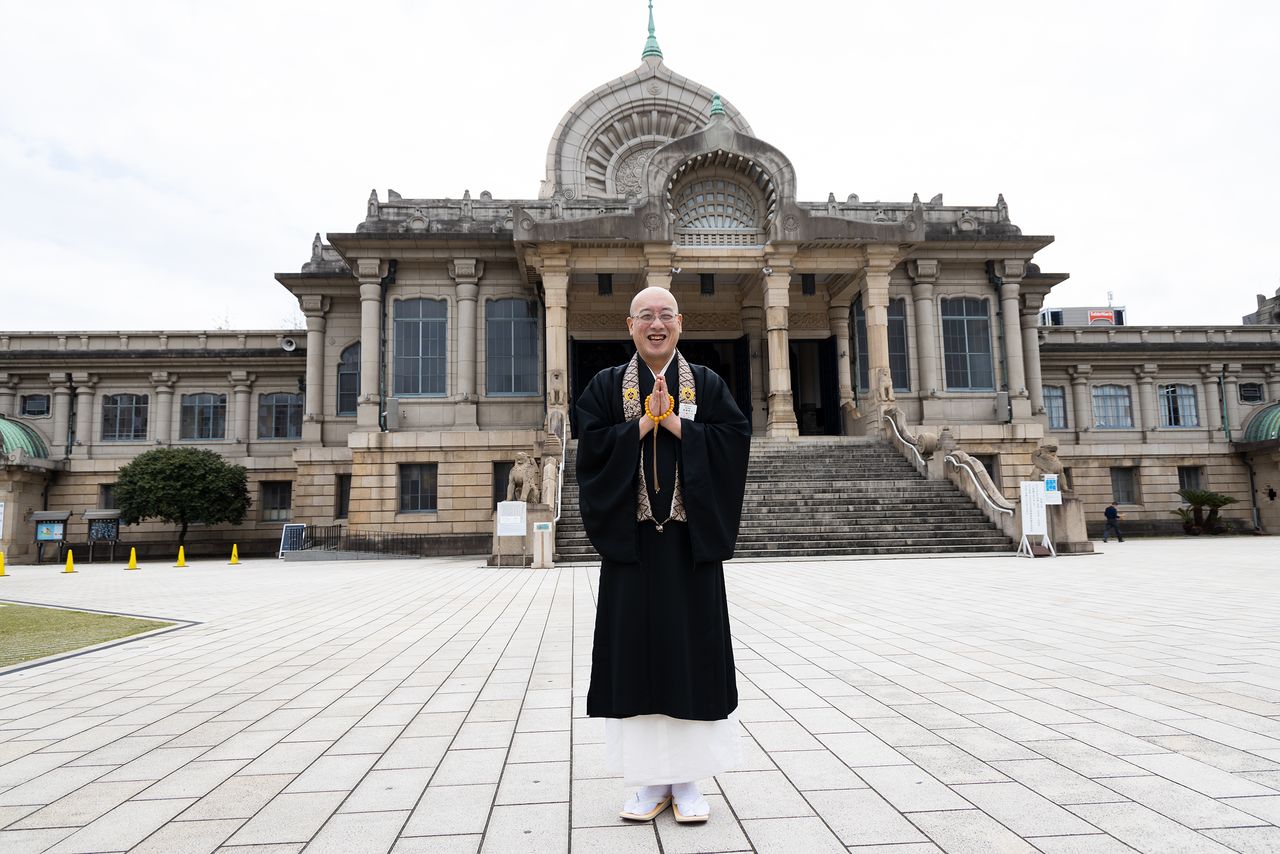 Higashimori Shōnin poses in front of the hondō. He worked at the business office of Honganji in Kyoto before coming to the temple in 2018. 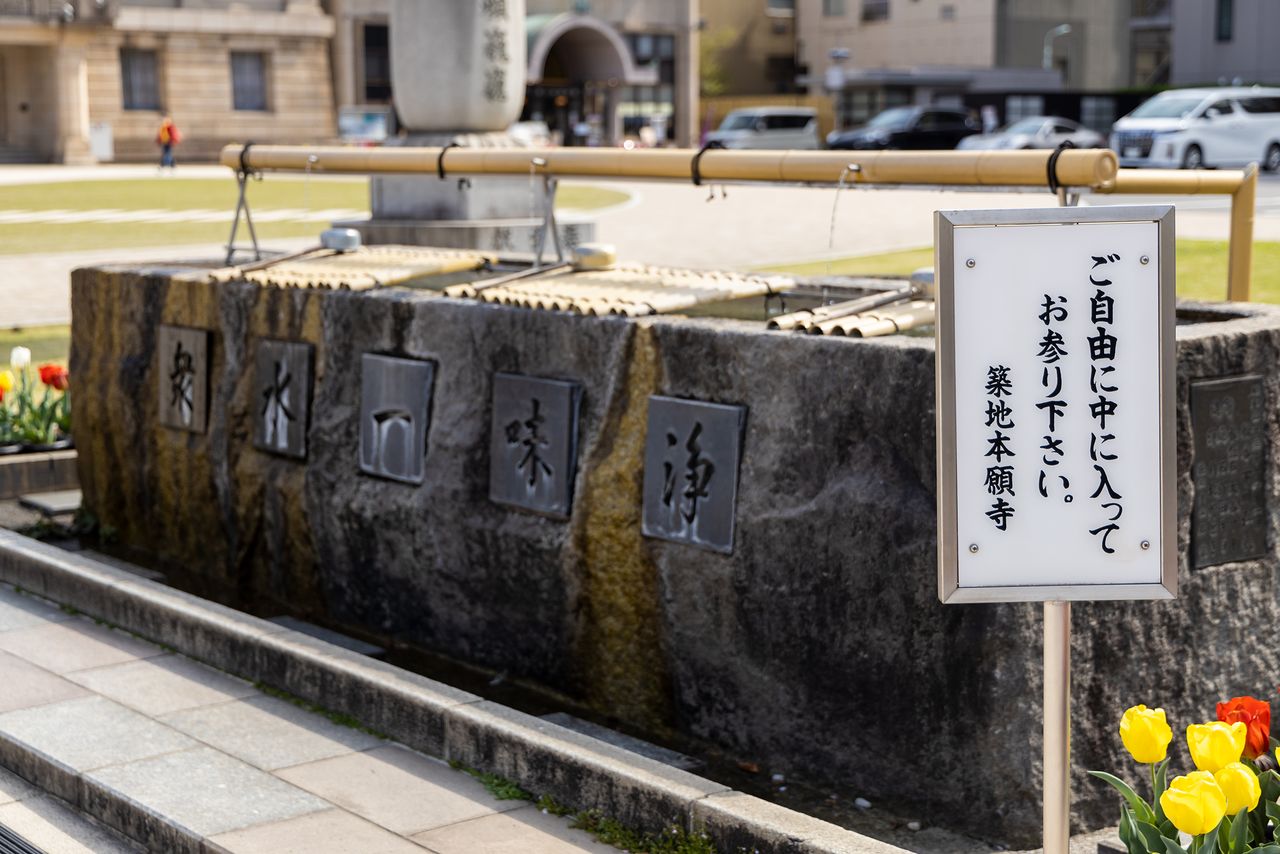 Water trickles from a stone cistern near the main entrance. Visitors are free to tour the grounds. 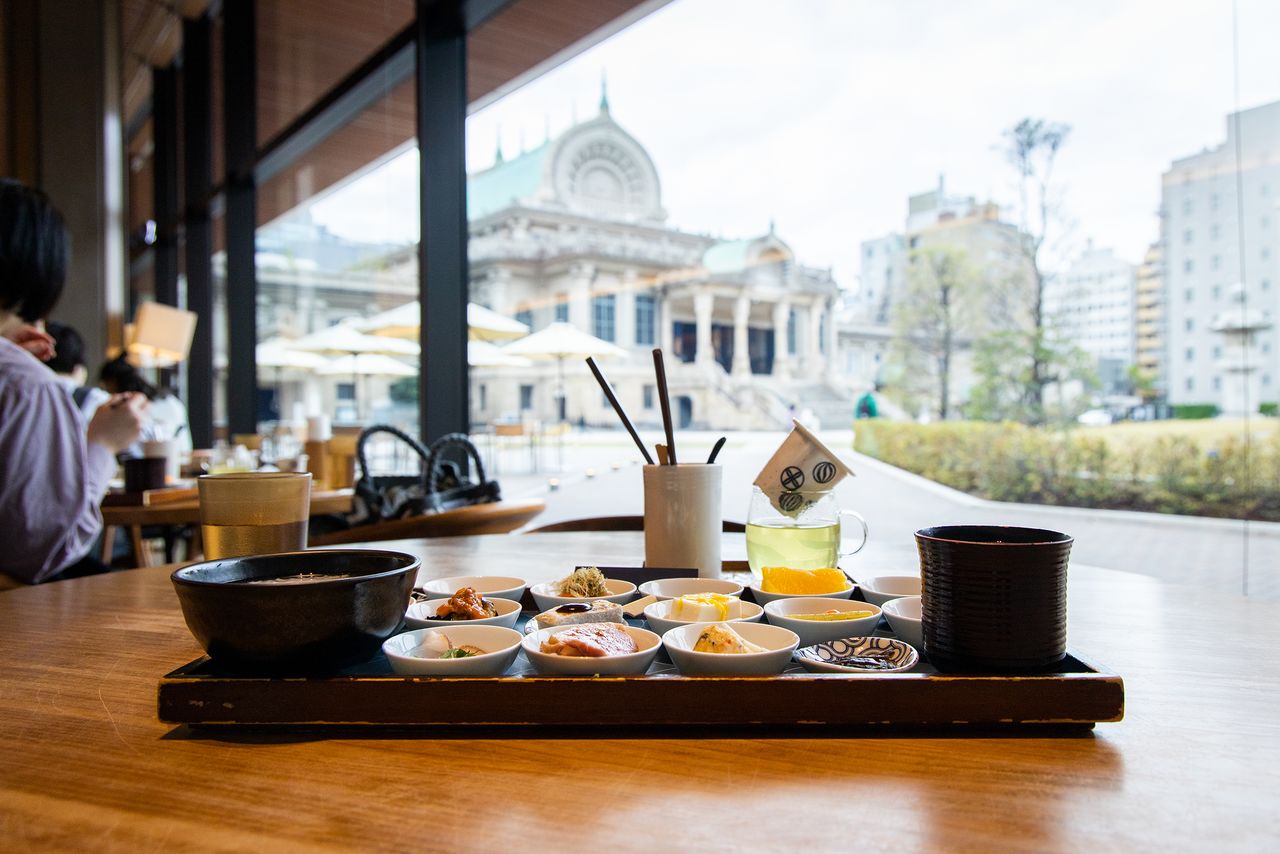 Tsukiji Honganji stands out from its surroundings, its exotic design making it appear more like a temple in South Asia than one in Japan. In drawing up the plans for the temple, Itō borrowed heavily from motifs he had come across while studying Buddhist architecture in places like China, India, and Turkey. He also included native elements as well as those from the West to create something of a hybrid structure, with Indian influence being the most evident. 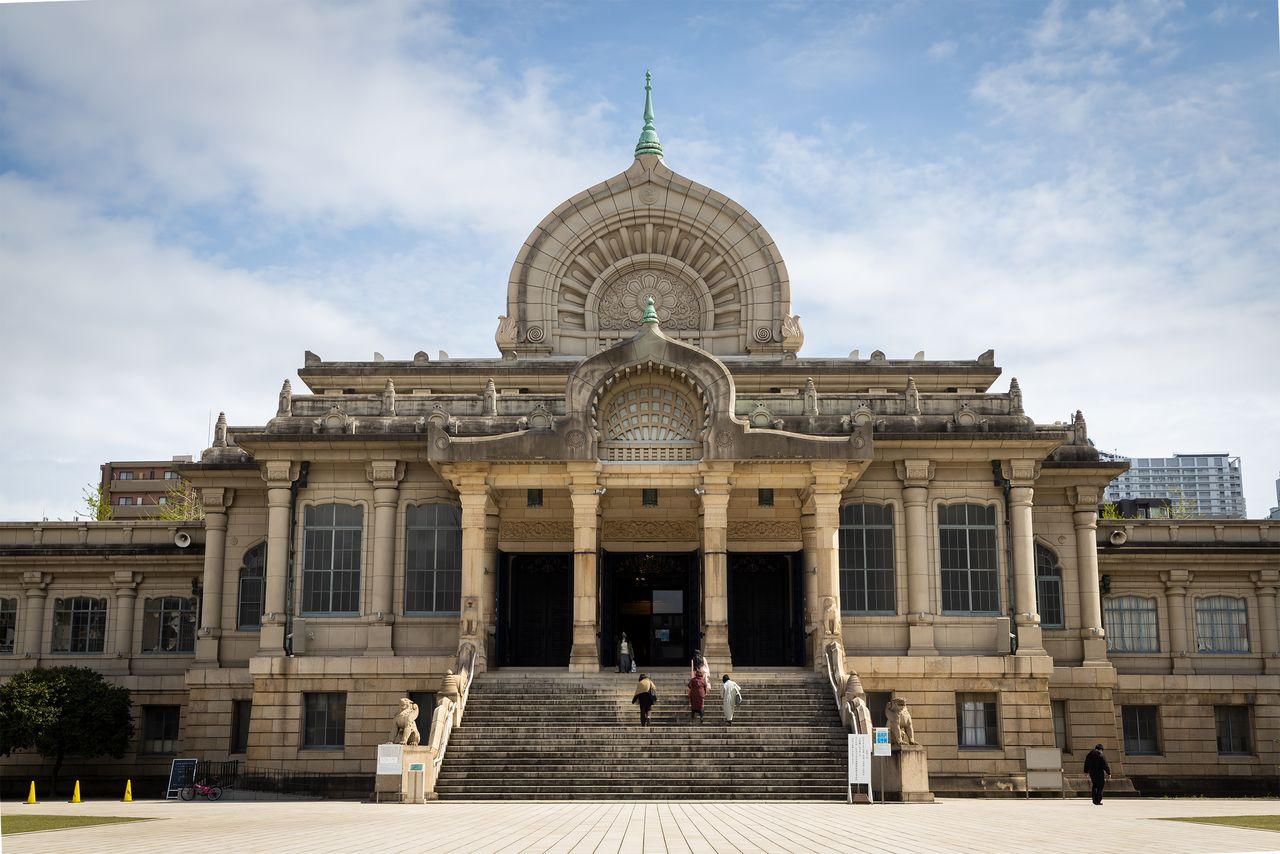 The dome atop the hondō is a distinguishing feature of the temple. 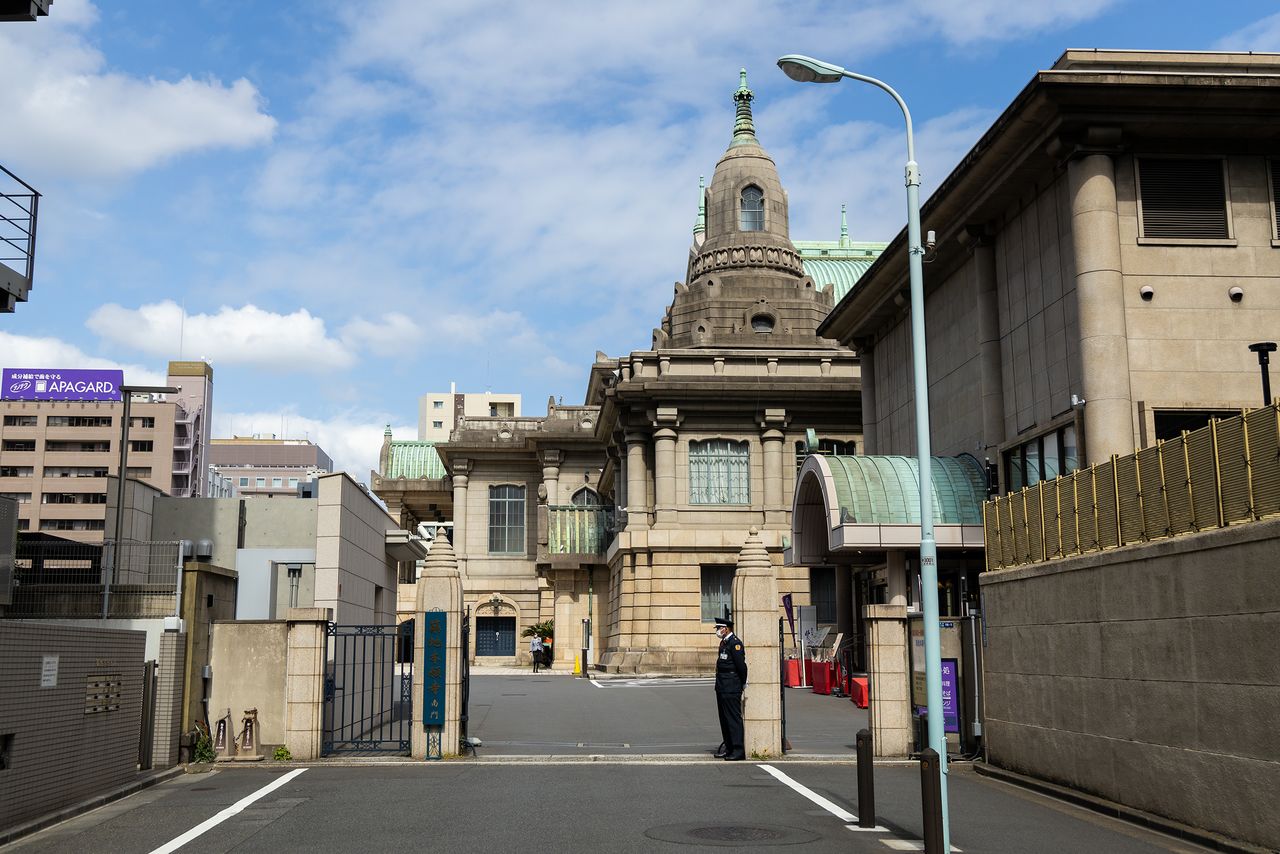 Higashimori notes that the design intrigues people as much today as it did when the temple was first built. “Wooden architecture had been the norm for temples since the earliest times,” he explains. “But Tsukiji Honganji broke with tradition in using concrete as its central building material. It’s also unusual in that the hondō has an open area for chairs instead of traditional straw mats, stained-glass windows, and a mercury-lamp chandelier. Such features might seem out of place in a temple, but not if you view the hall as a modern building.”

The use of concrete gives an impression of the stone temples of India on which the structure is modeled, and has the added benefit of fortifying the building against earthquakes and fires that have ravished early incarnations of the hall. Inside, the hondō is well lit and comfortable, making it accessible to even elderly patrons. During the colder months, a central steam-heating system, an innovative idea for a temple, keeps the interior at a pleasant temperature. 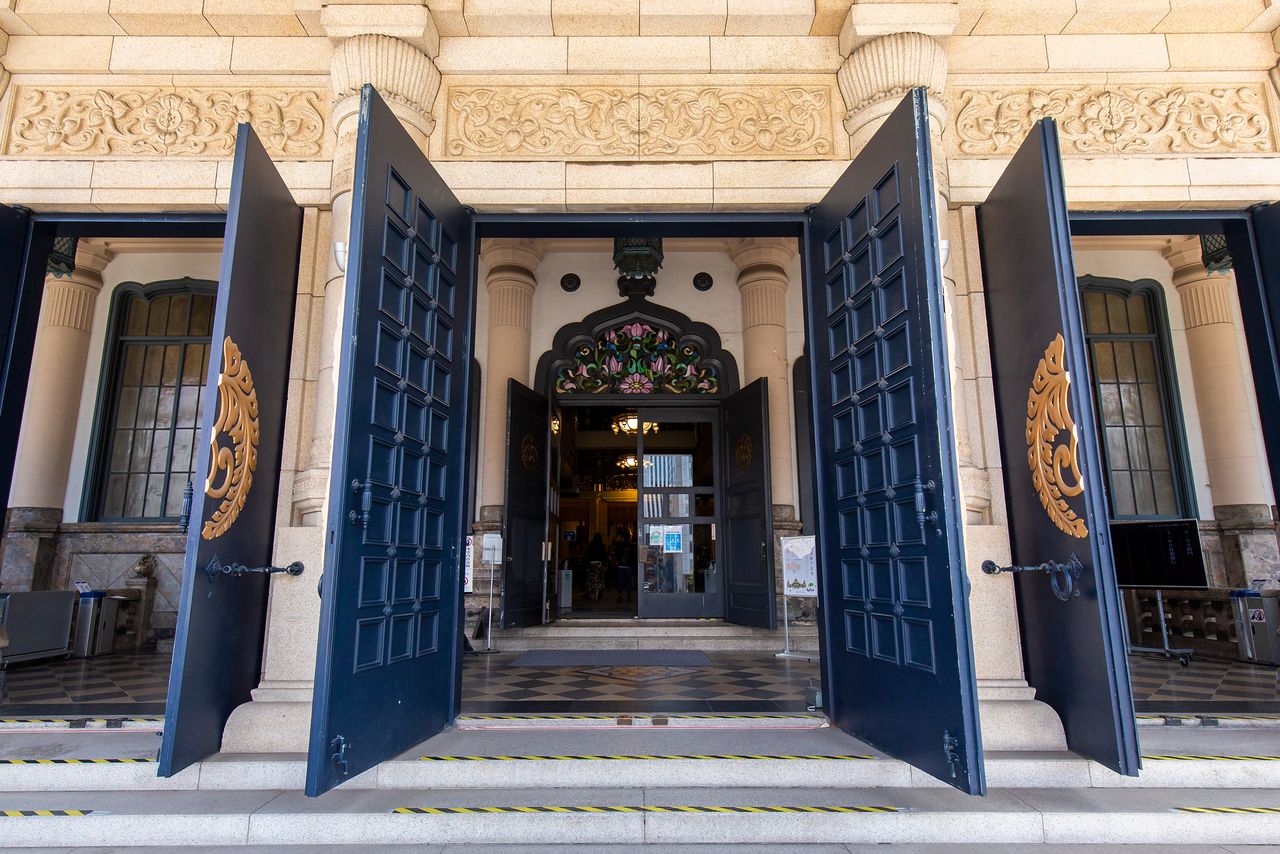 The entrance of the hondō reveals images of lotus flower rendered in stained glass. 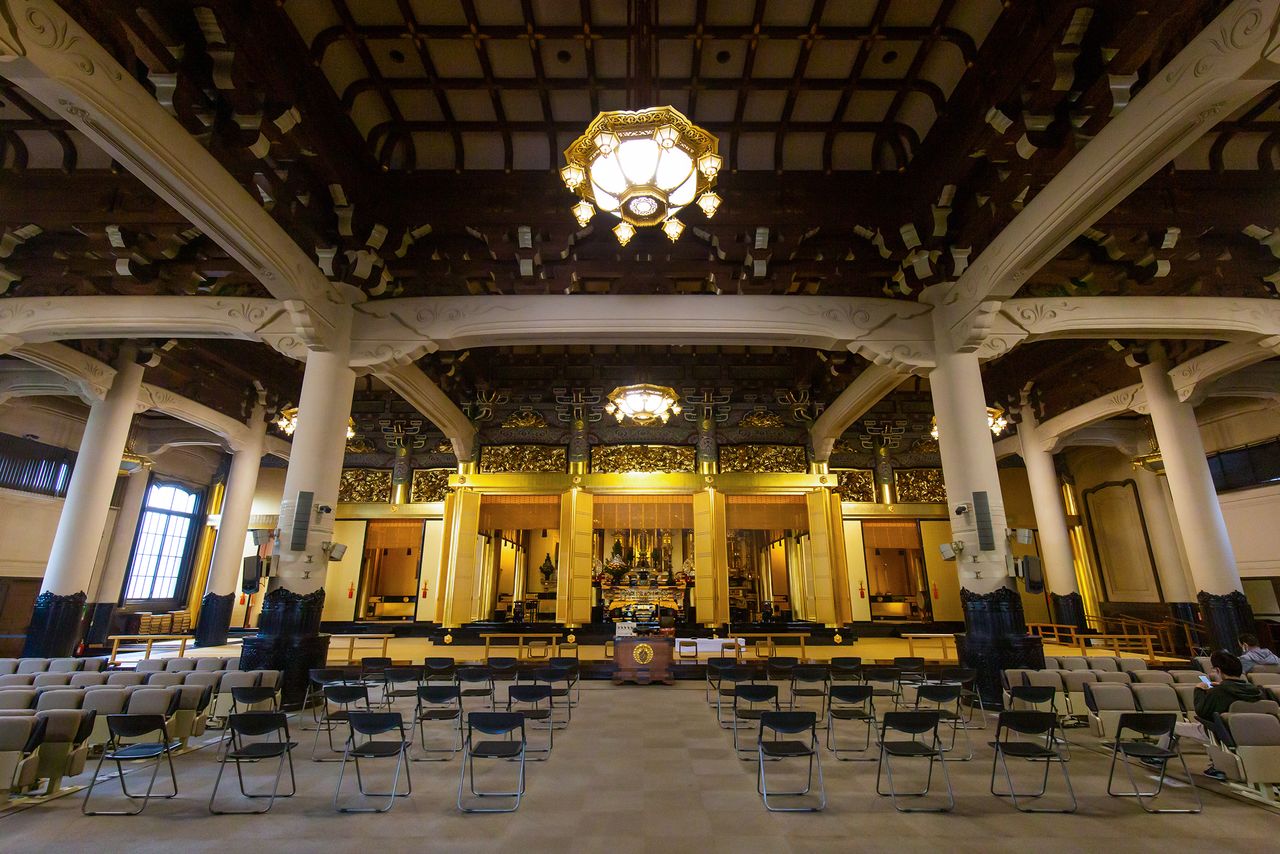 Chairs set out for parishioners under a ceiling featuring traditional Japanese bracketing. Such seating was unusual at the time the temple first opened. 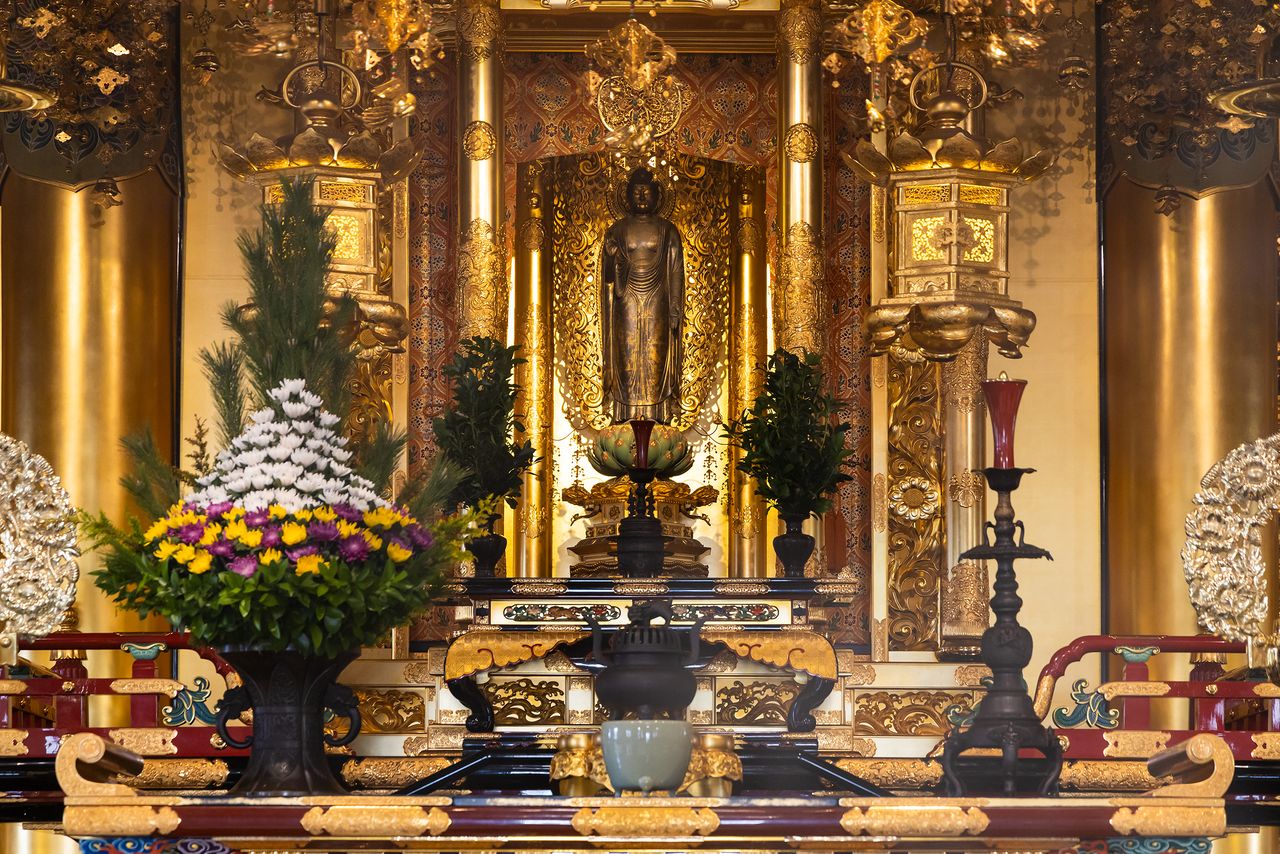 Visitors to Tsukiji Honganji will be struck by the intricate and eclectic ornamentation of the main hall. One of the grandest features is the dome inspired by Indian Buddhist architecture, the exterior of which bears the iconic heart-shaped image of a leaf of the Bodhi Tree with a lotus flower at its center and is topped by a number of pointed finials. Many of the windows are in the bell-shaped katōmado style typical of Japanese temples, while pillars, eaves, and hand railings have decorative elements that bring to mind ancient Greece and Islamic culture.

The interior of the temple is equally varied, boasting brackets under the ceiling designed in traditional Japanese and Chinese styles, an exotically designed main light fixture, Western stained-glass windows, and even a pipe organ. The artistic detail also extends to areas like the floors and walls, light coverings, and metalwork on doors, all of which are rendered in beautiful detail. 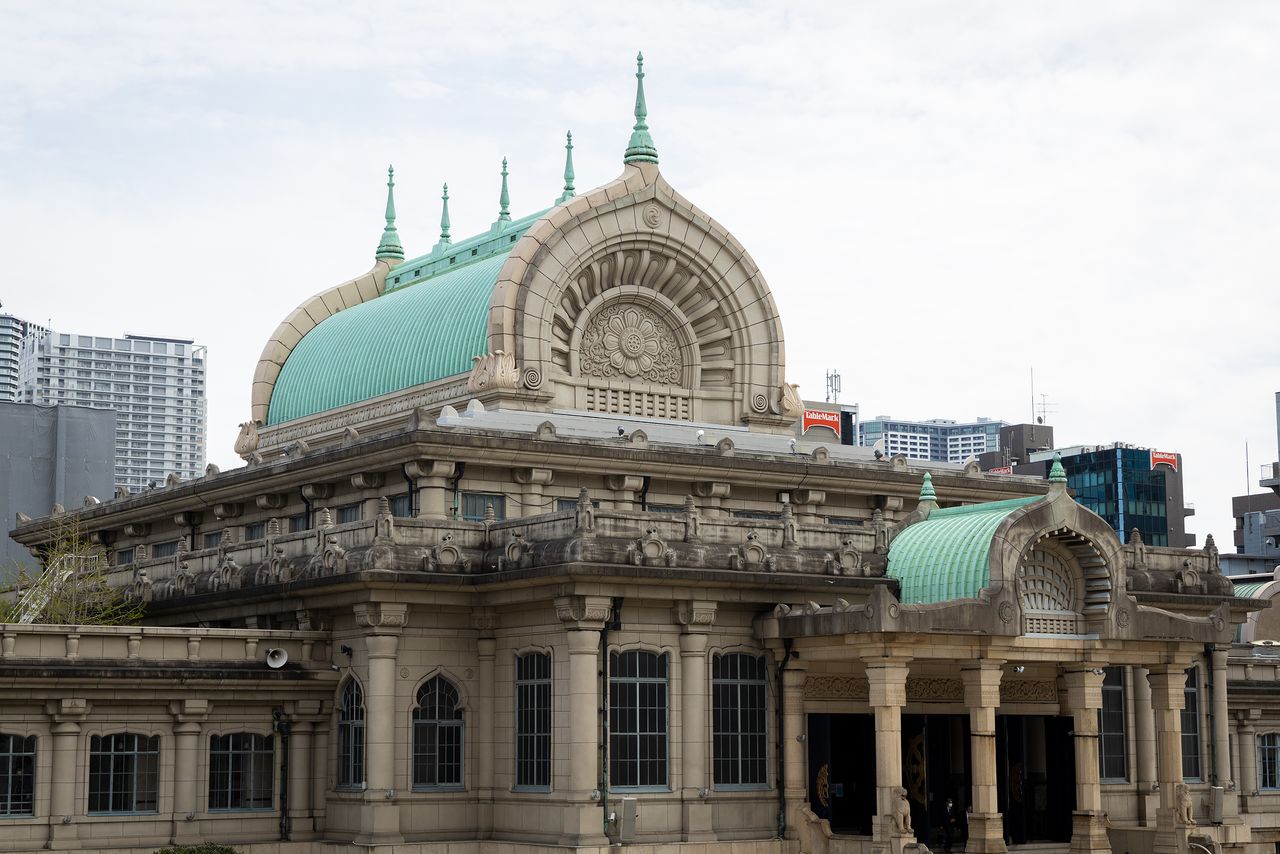 The temple uses a wide range of architectural elements, including an Indian-inspired dome and decorative windows done in the Japanese katōmado style. 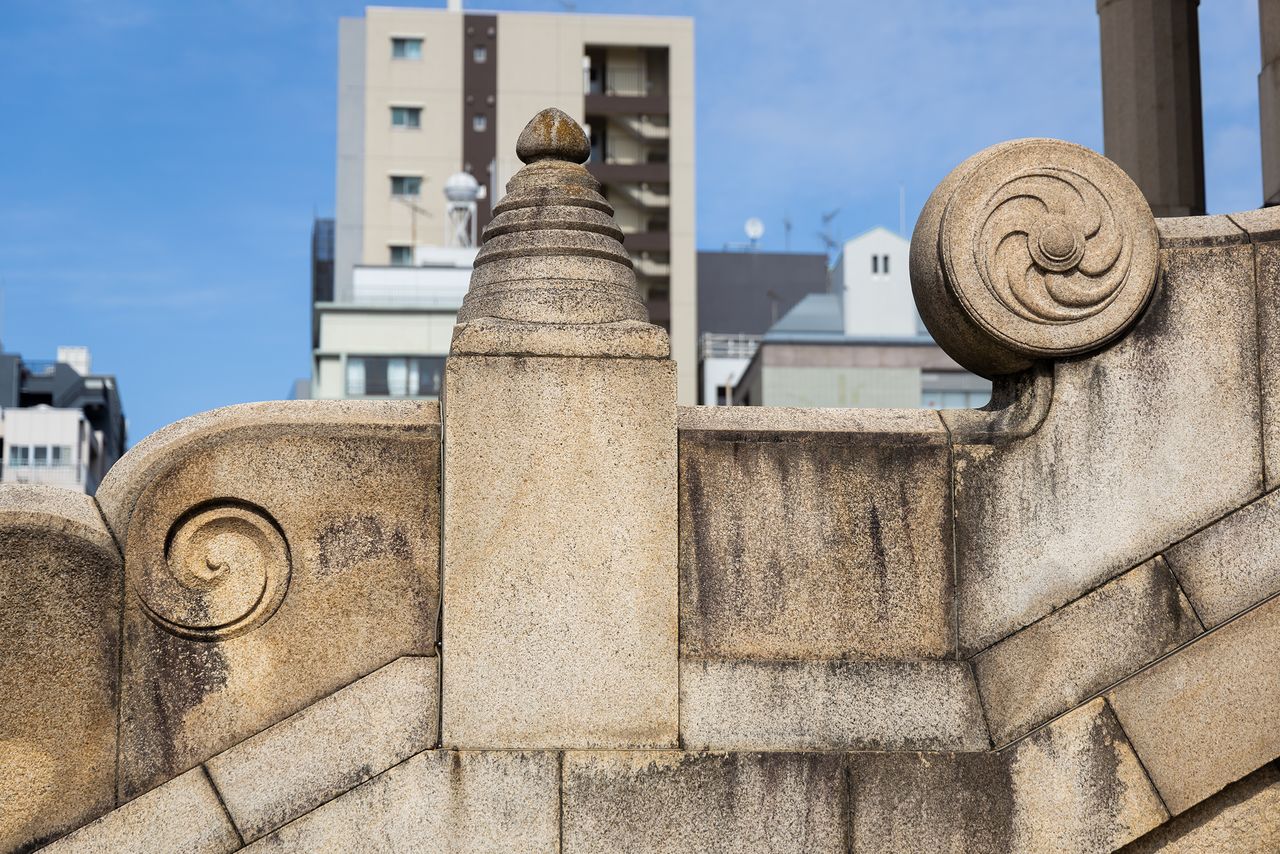 The steps of the temple feature pagoda-like stone reliefs and other carvings. 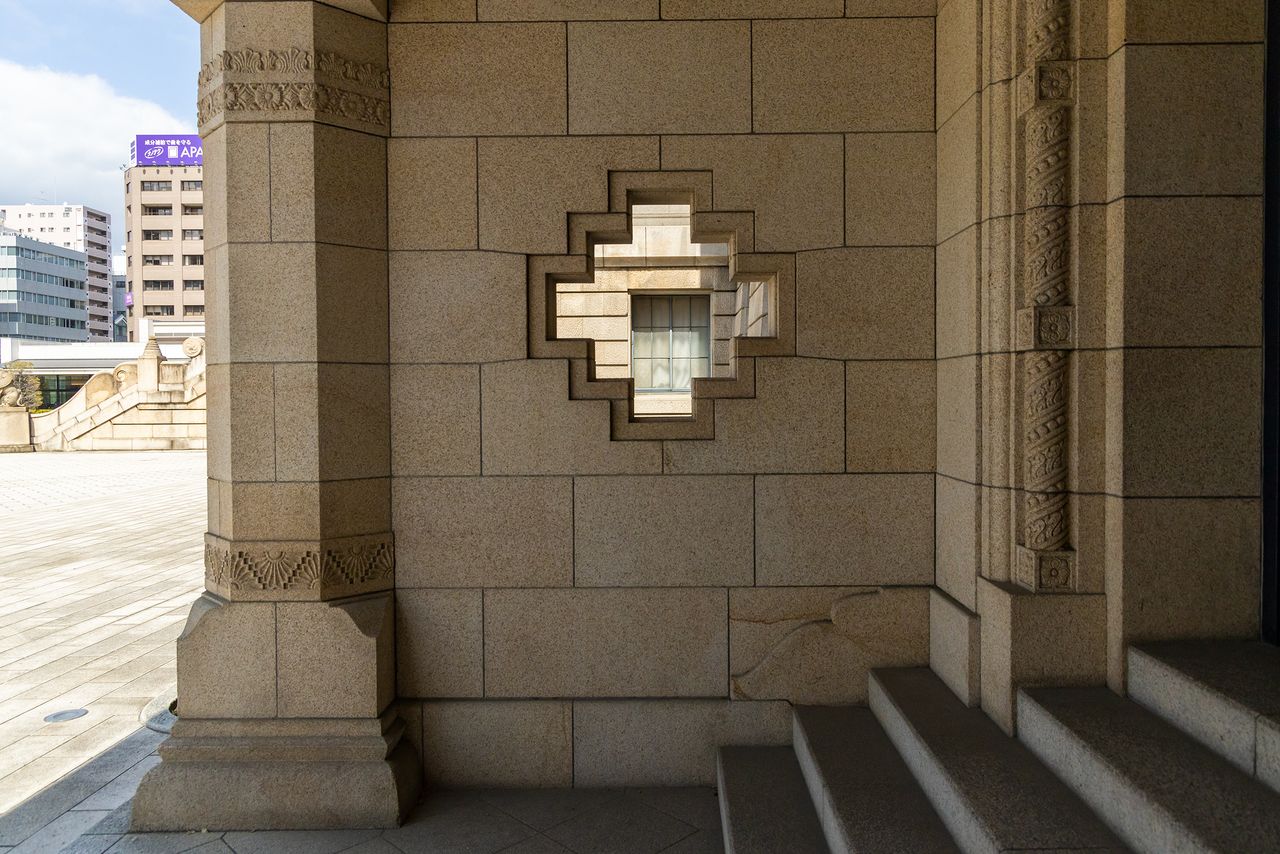 A geometric design in a wall near the entrance. 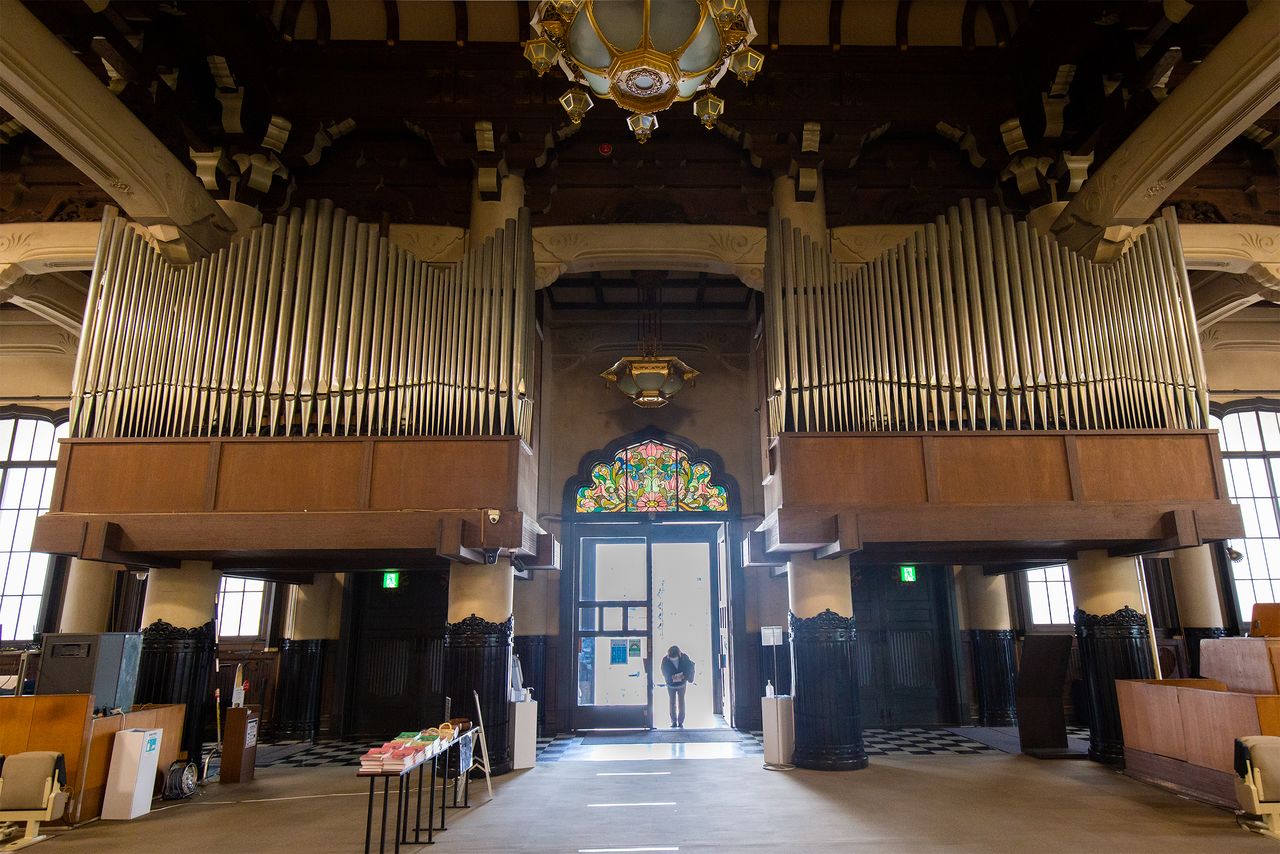 A stained-glass window shimmering from between the towering pipe organ is a peculiar scene for a Buddhist temple.

Designer Itō was fascinated with all creatures, fanciful and real, and included animals in many of the decorative elements of the temple. There are komainu typically found guarding the entrance to Shintō shrines, lion-dogs known as shishi, and even a carving that brings to mind the Great Sphinx of Giza. There are also images of more familiar beasts like birds, monkeys, and elephants—animals that feature in Buddhist teachings. 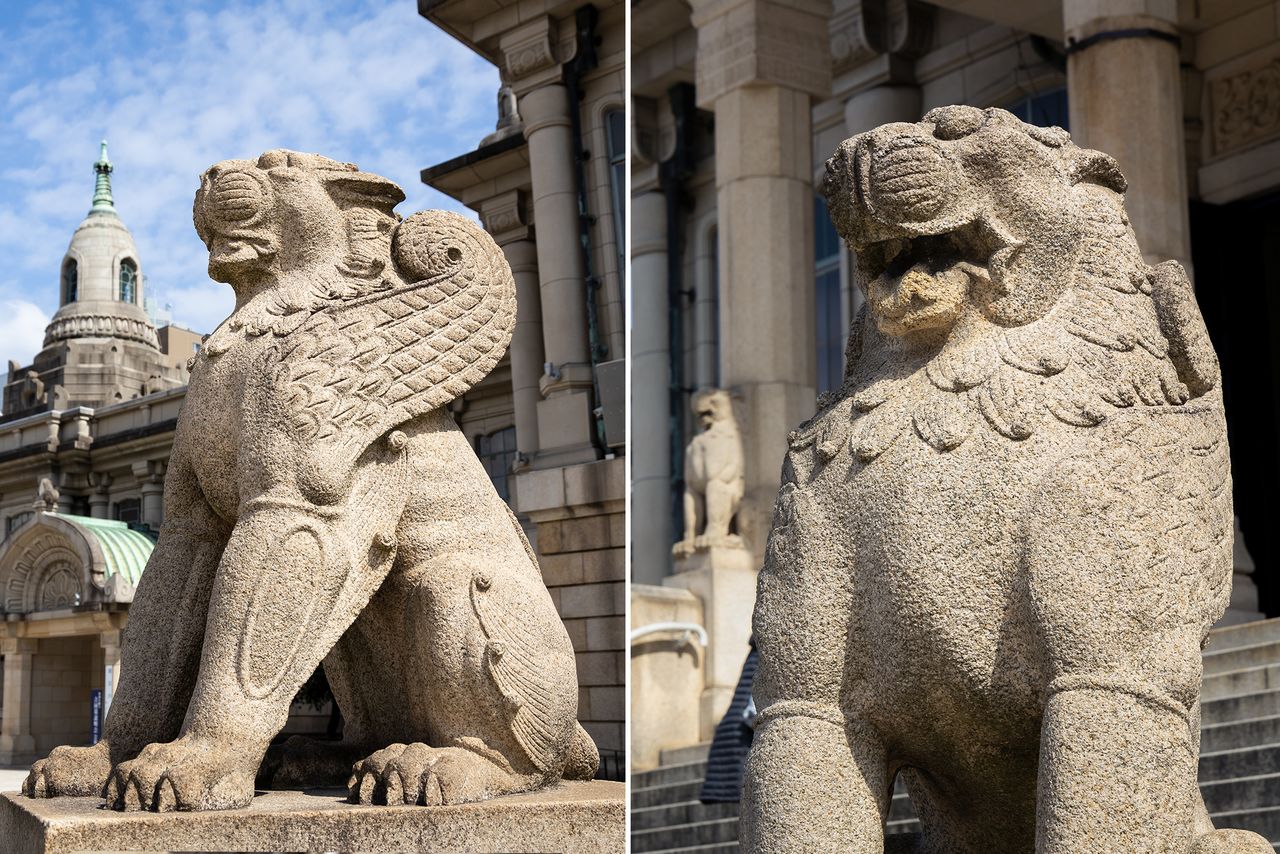 Winged shishi guarding the front of the temple are depicted expressing the sacred utterance Aum. 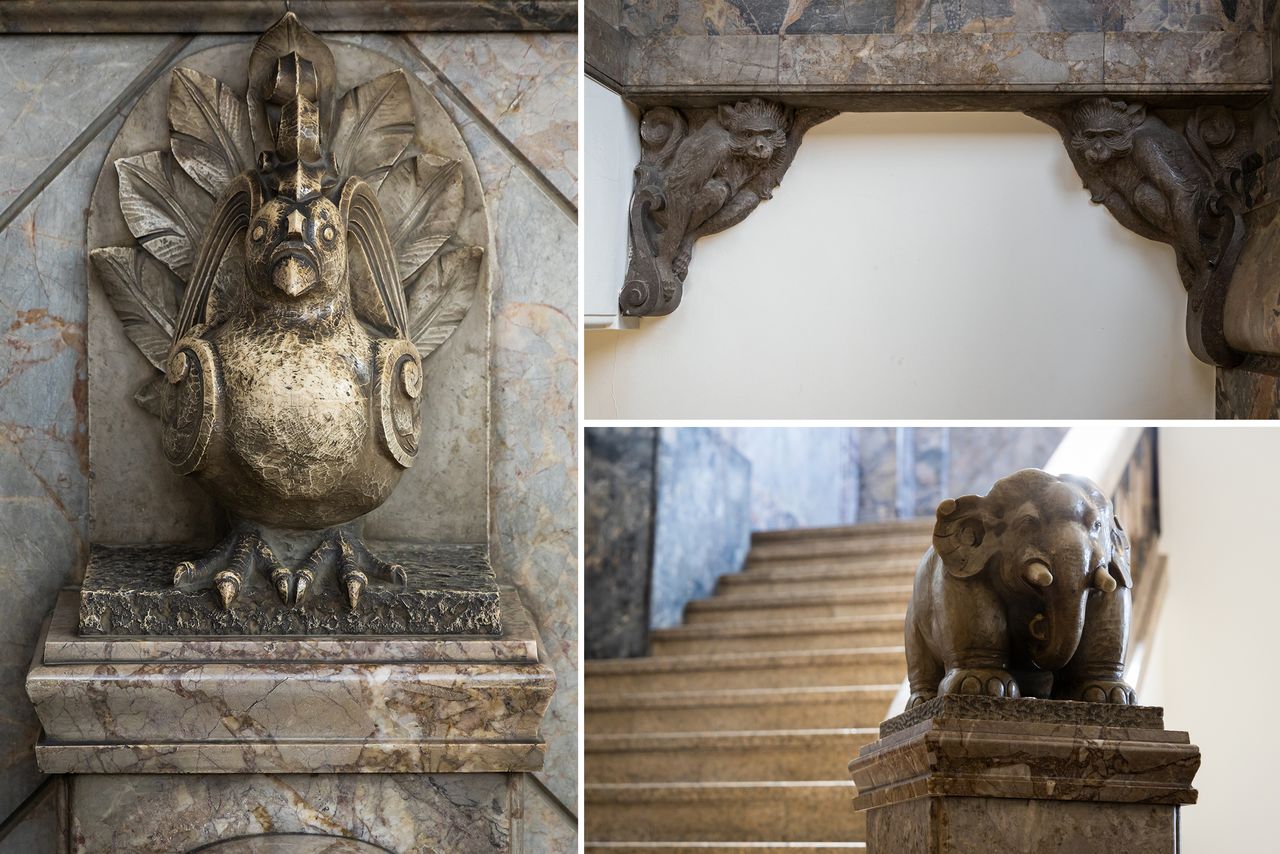 Images of birds, monkeys, and elephants—important animals in Buddhist teachings—adorn different areas of the temple. 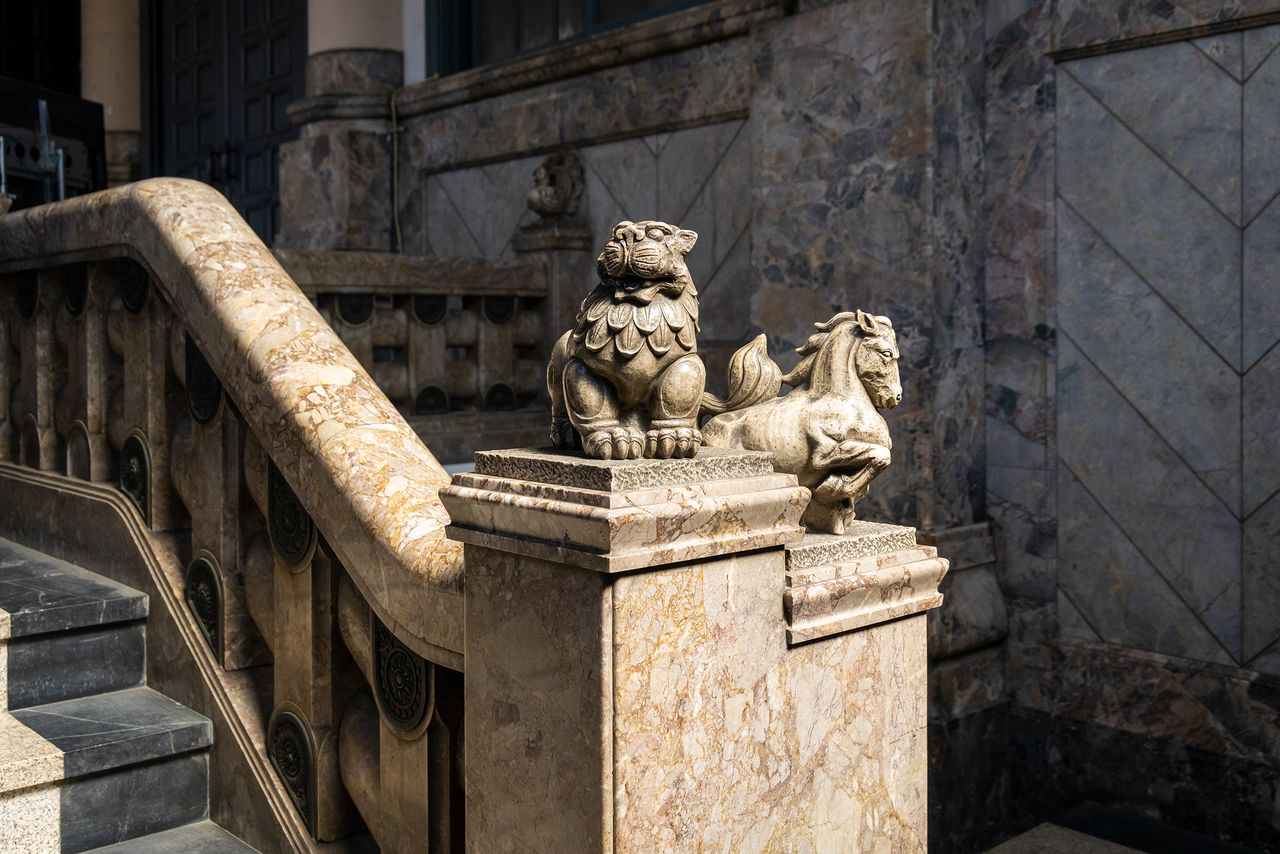 The mythical shishi joins a horse on the stone railing of a stairway.

In 2017, Tsukiji Honganji opened its information center on the grounds. It houses the café Tsumugi and a bookstore, as well as featuring a second-floor terrace where visitors can enjoy a panoramic view of the hondō. 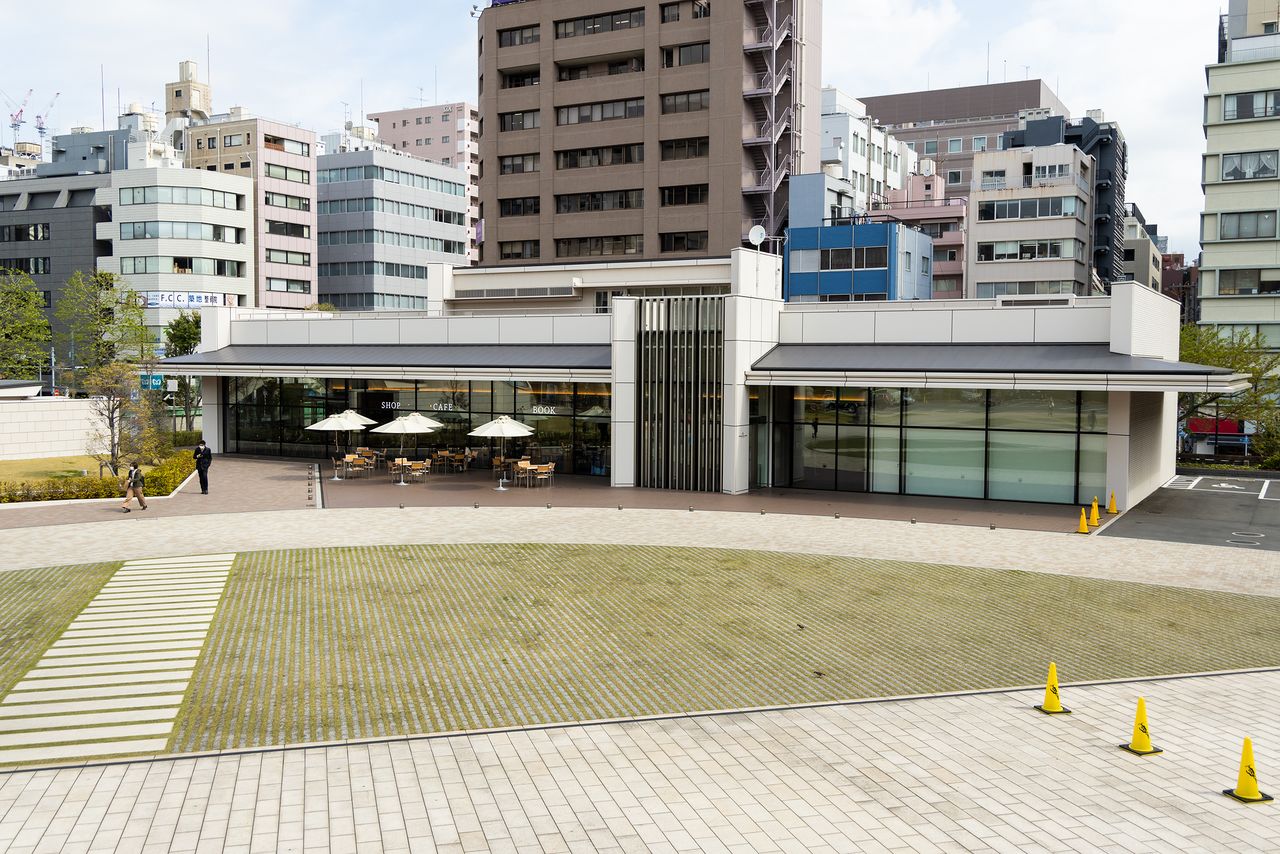 Tsukiji Honganji’s information center. It is located near Exit 1 of Tsukiji Station on the Tokyo Metro Hibiya Line.

The café offers coffee, tea, and other drink, desserts, and light fare. One of the most popular menu items is an 18-dish breakfast set featuring traditional items like rolled omelet, tsukudani, and tōfu. In the evening, the hondō is illuminated, providing diners a different perspective of the structure. 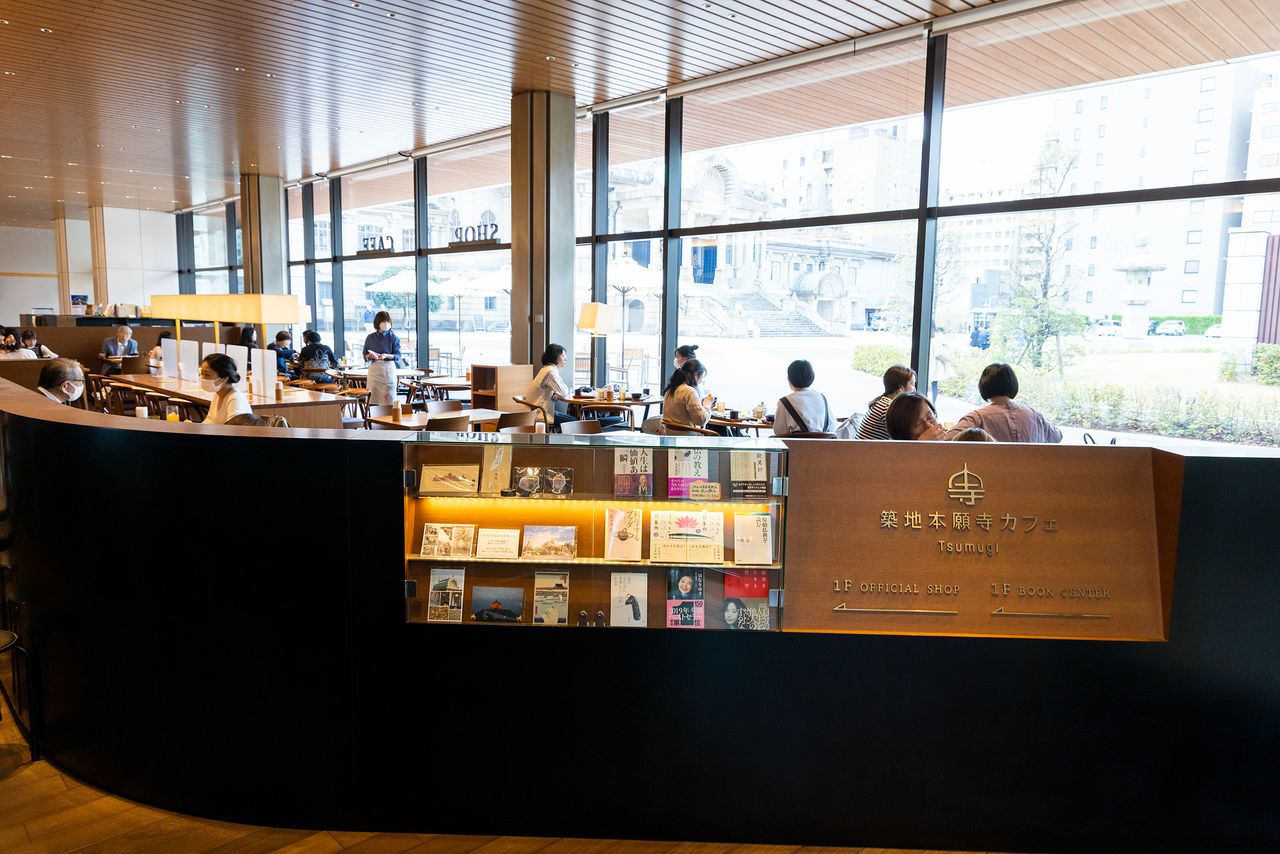 The interior of Tsumugi. Large windows give an unobstructed view of the hondō. 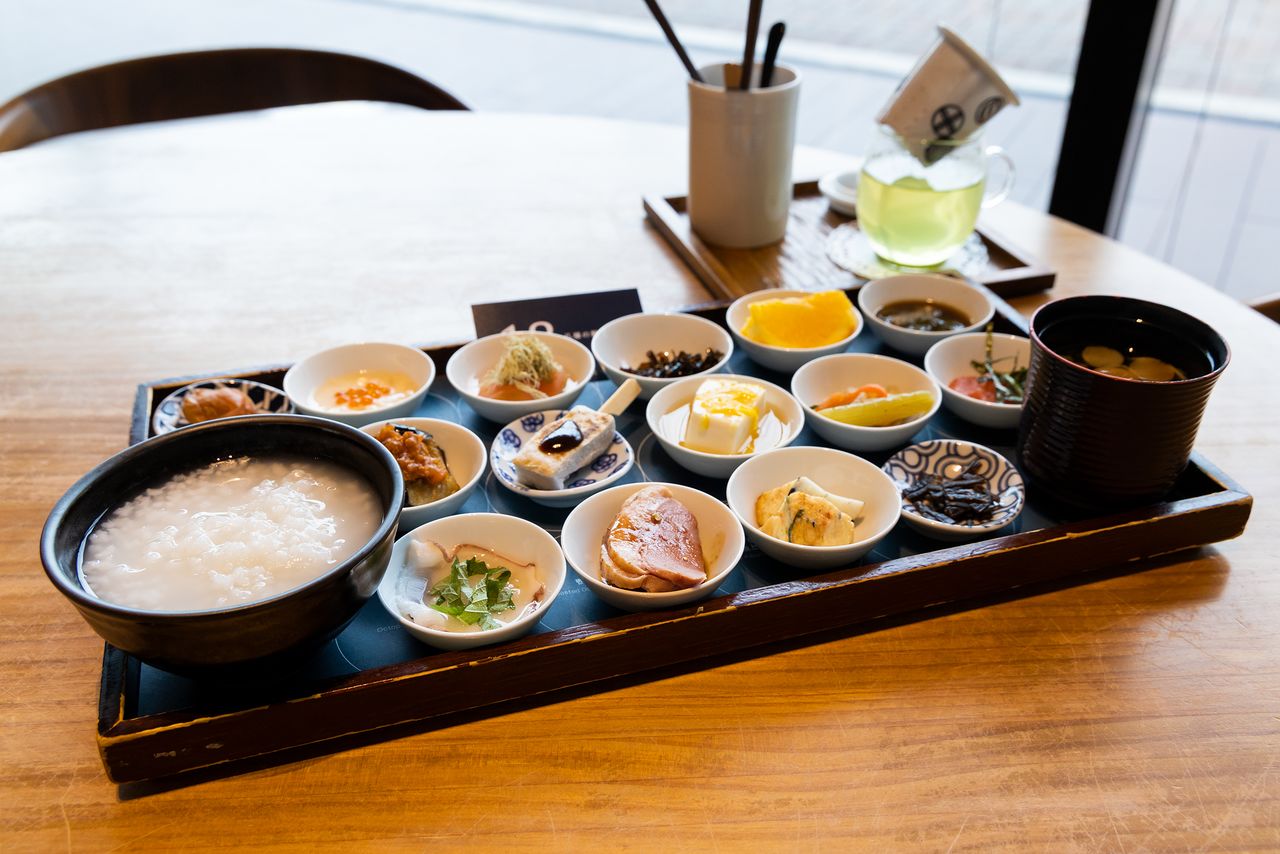 The 18-dish breakfast special is served with a bottomless bowl of rice porridge. 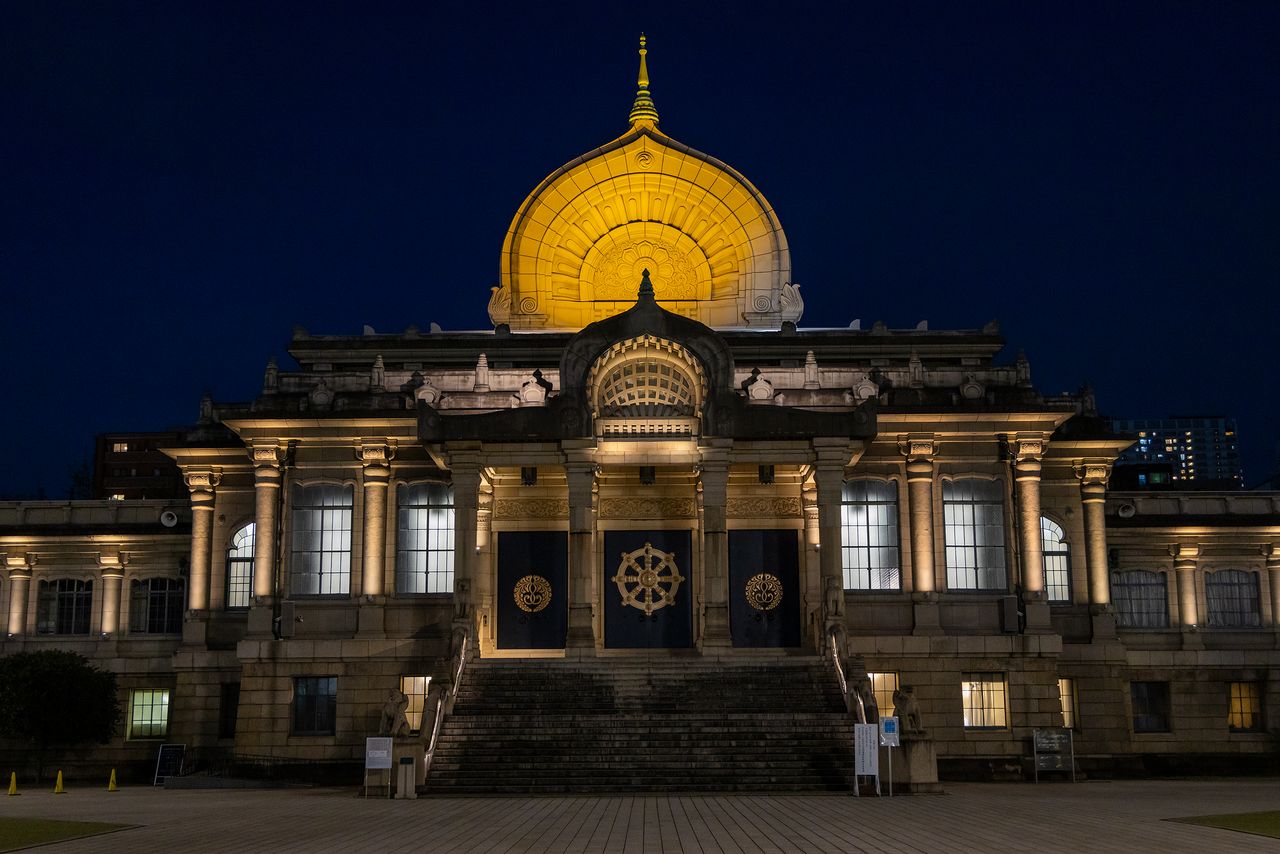 Tsukiji Honganji lit up at night.

Next to the café is the temple bookstore. As might be expected, the shop is stocked with works aimed at followers of Buddhism. Rosaries are also for sale, and various items available only at Tsukiji Honganji. A priest is always posted inside the information center for visitors wanting to discuss religious or personal matters. 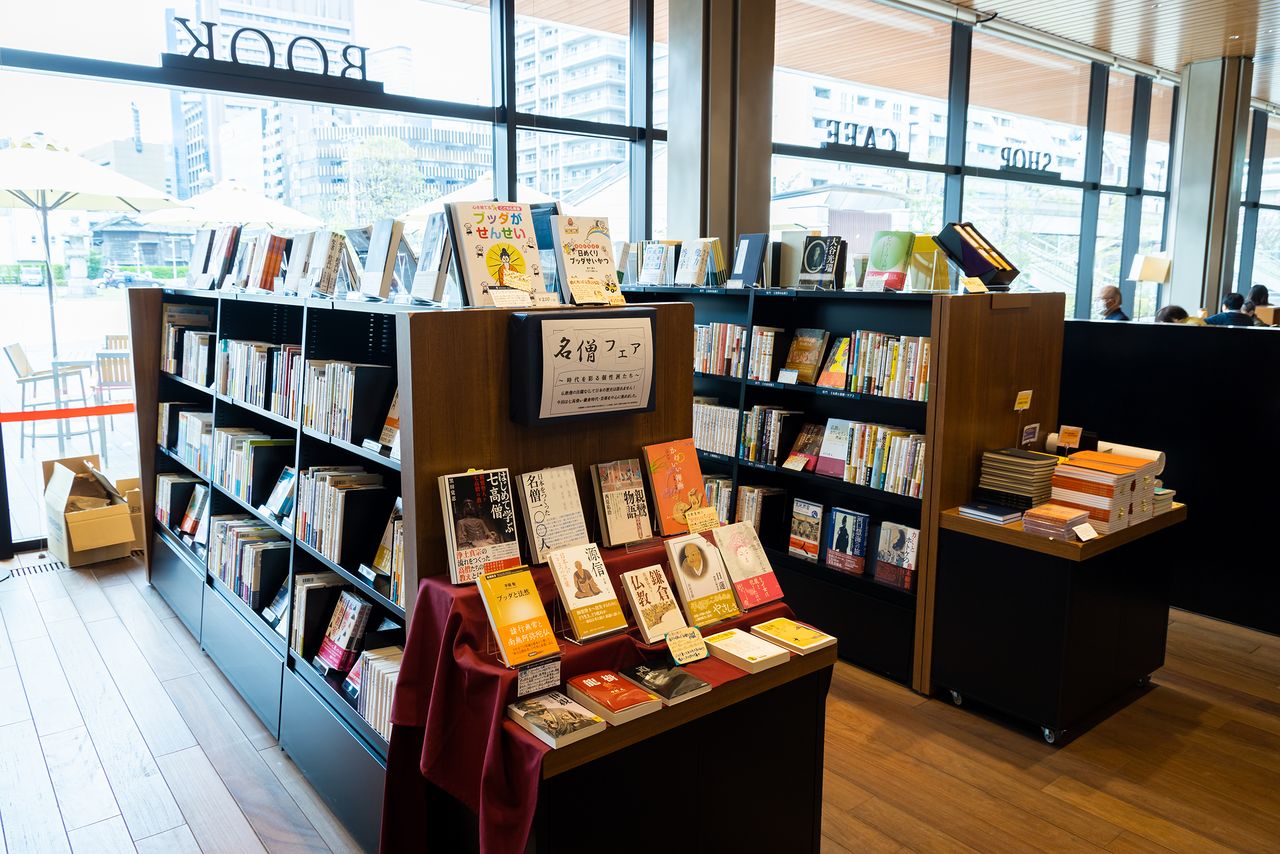 The temple bookstore has a wide range of titles concerning different aspects of Buddhism. 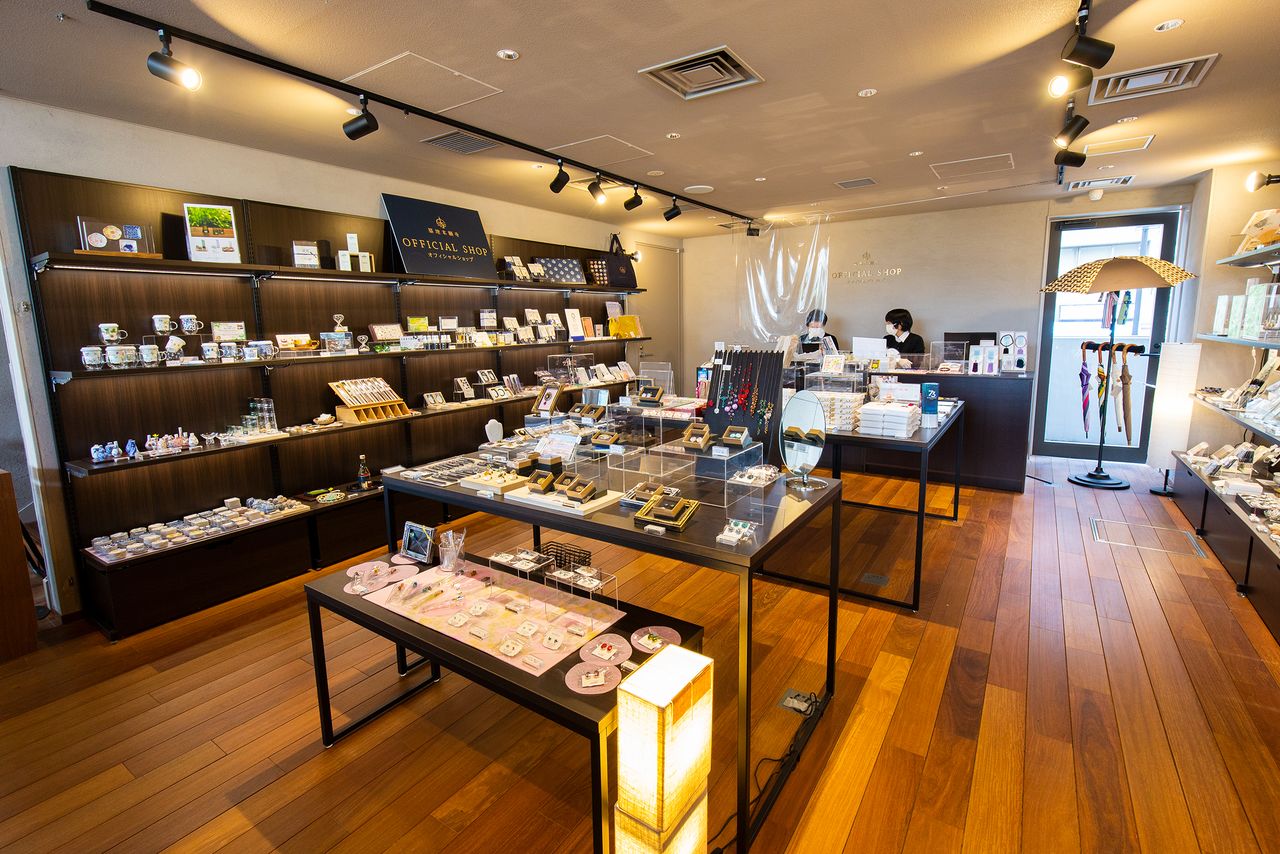 The temple’s official shop carries religious paraphernalia as well as knickknacks and other items bearing the logo of Tsukiji Honganji.

Next to the hondō is the multipurpose facility, Tsukiji Honganji Kaikan. The building houses a wedding hall, lounge, Japanese restaurant, and souvenir corner. There is also a hotel open to the public offering both Japanese- and Western-style rooms at reasonable prices, making it a great base for touring the outer market and surrounding areas. 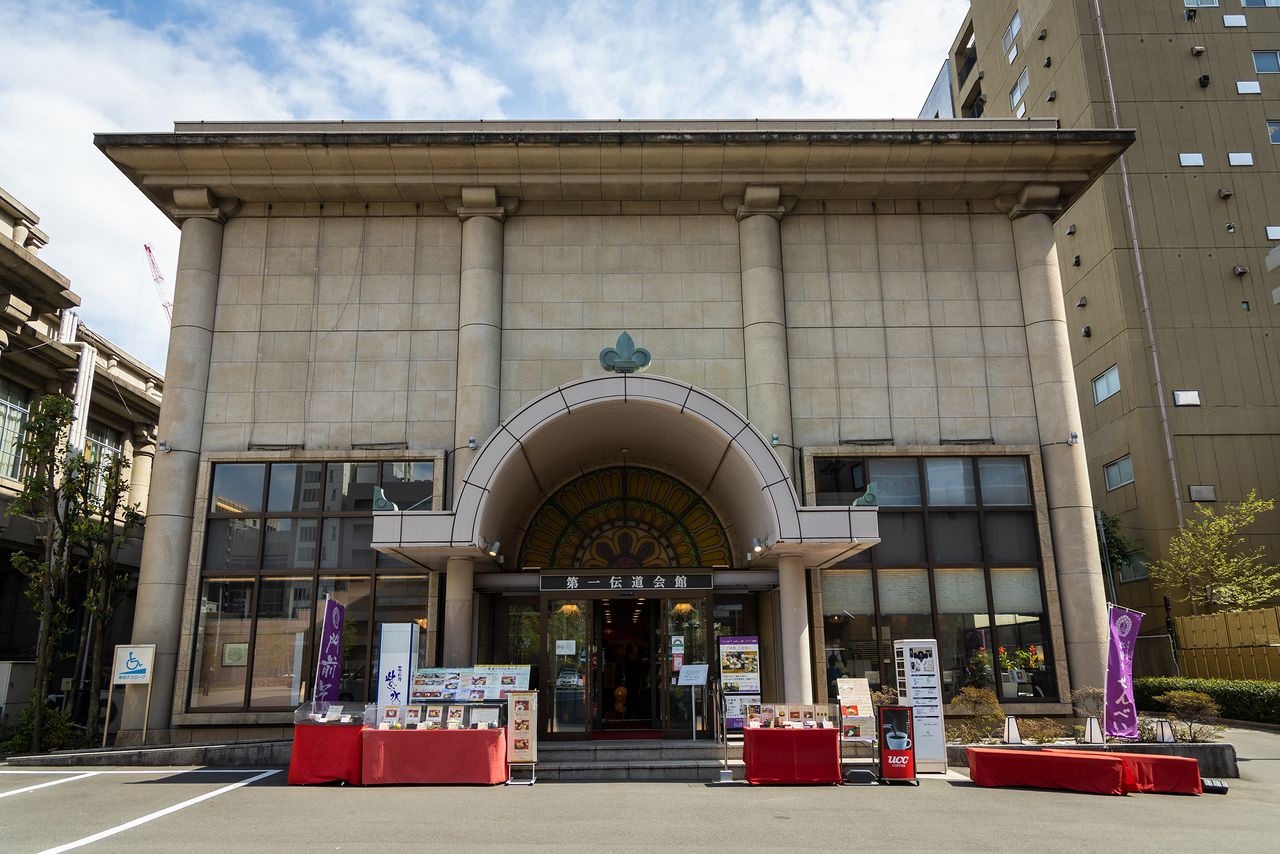 The hotel inside the Tsukiji Honganji Kaikan has 12 rooms that start from ¥5,500 per person per night. 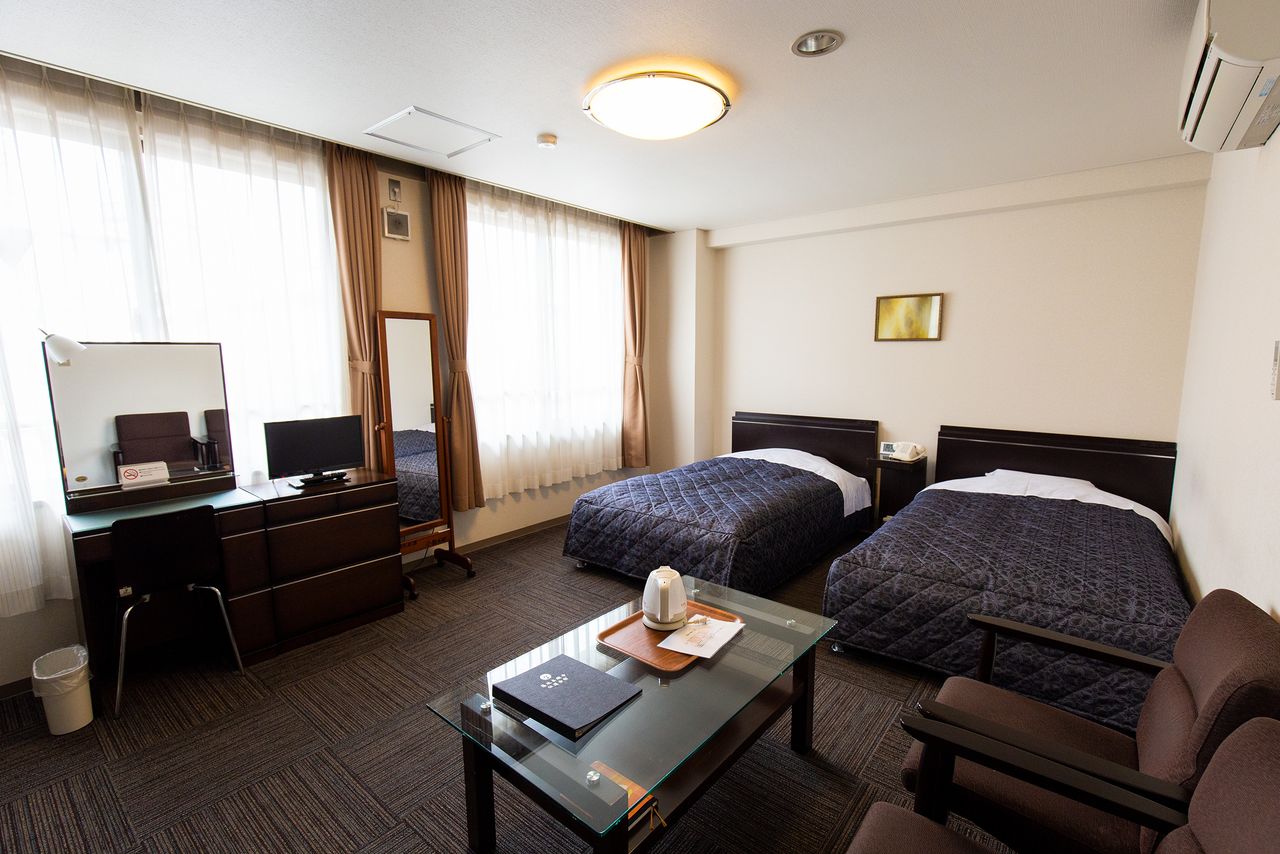 Tsukiji Honganji has also taken to social media as part of its outreach. Along with uploading short talks by priests on various aspects of Buddhism to YouTube, the temple livestreams musical performances featuring the pipe organ in the main hall. “We’re using the past and ongoing legacy of the Tsukiji Honganji to build connections locally and across the Internet,” Higashimori says. “Our goal is to become an open temple in every way.” 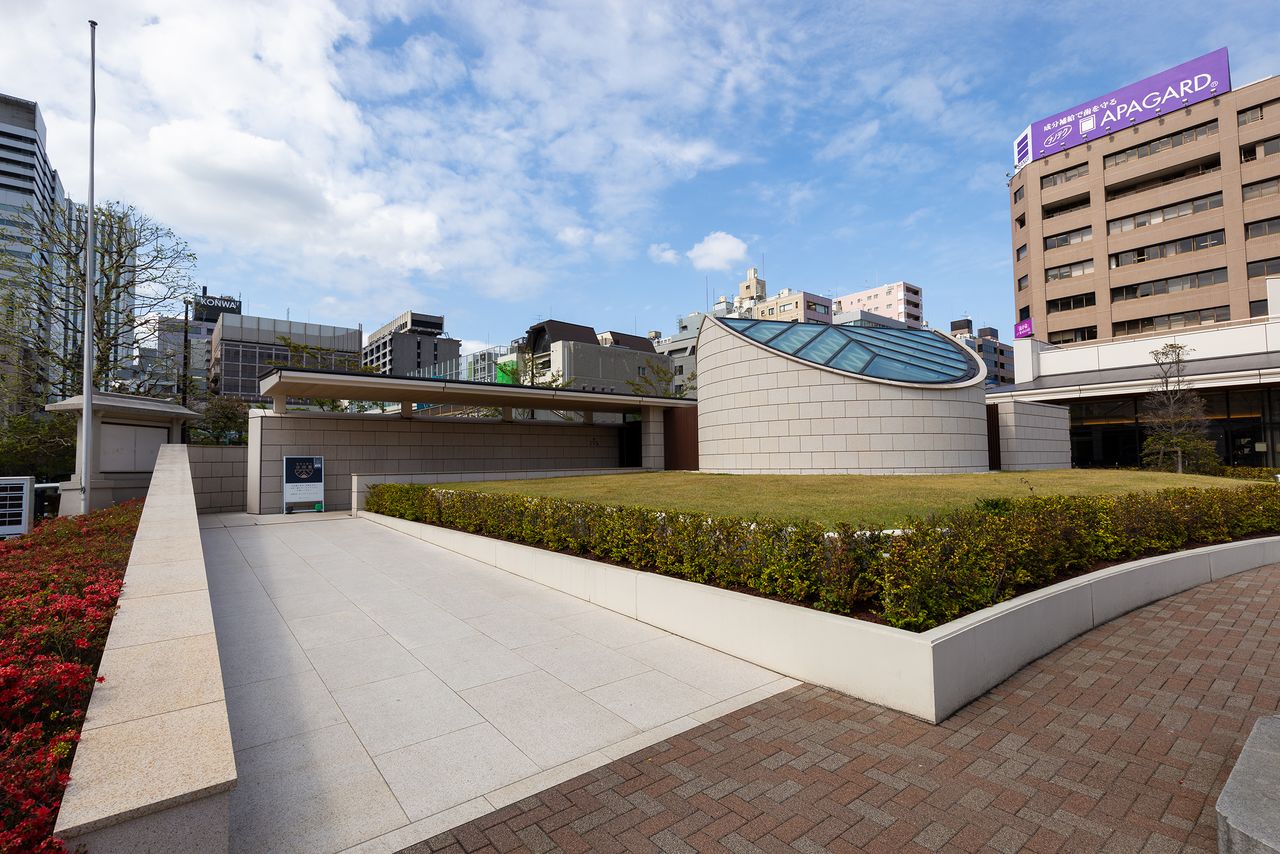 The temple’s communal grave is open to people of different denominations. 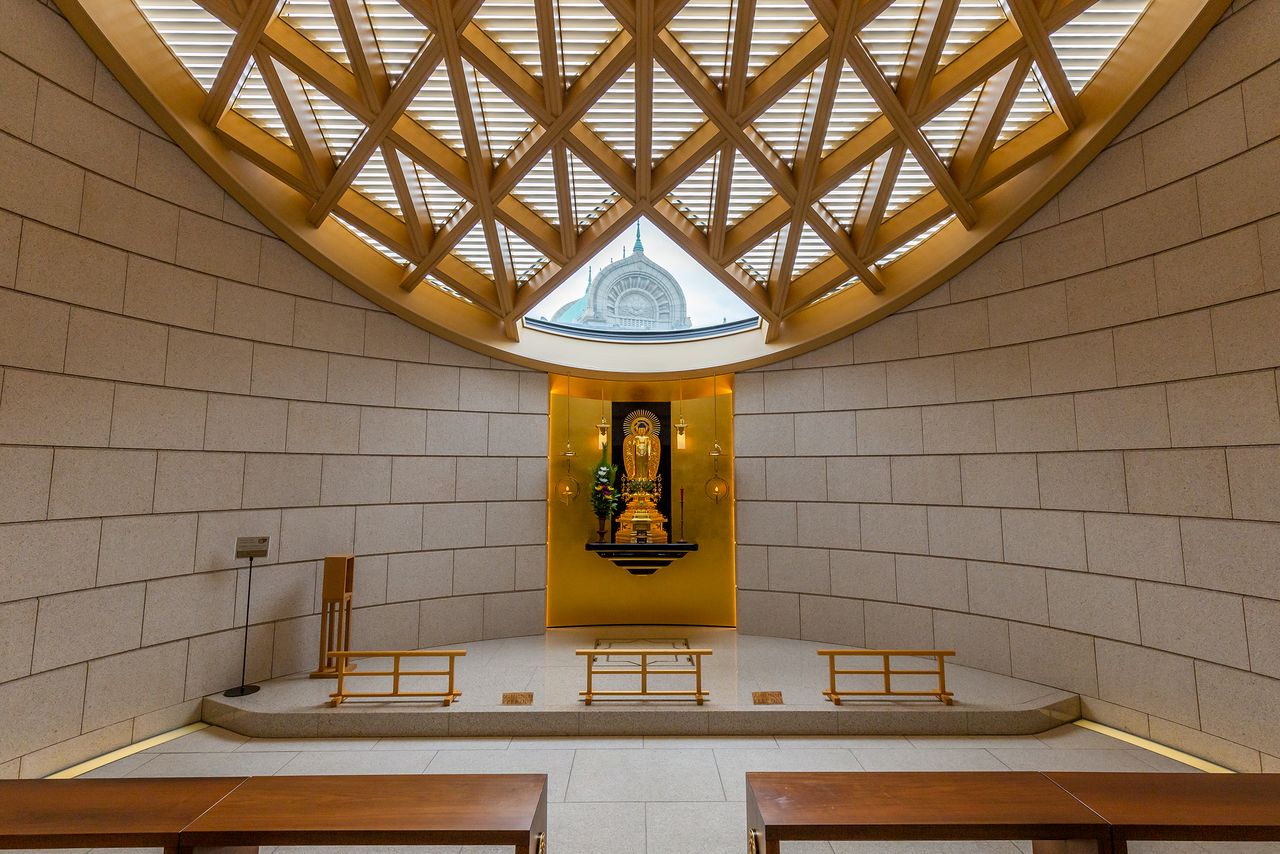 The altar of Tsukiji Honganji’s communal grave has a window that looks onto the dome of the main hall. 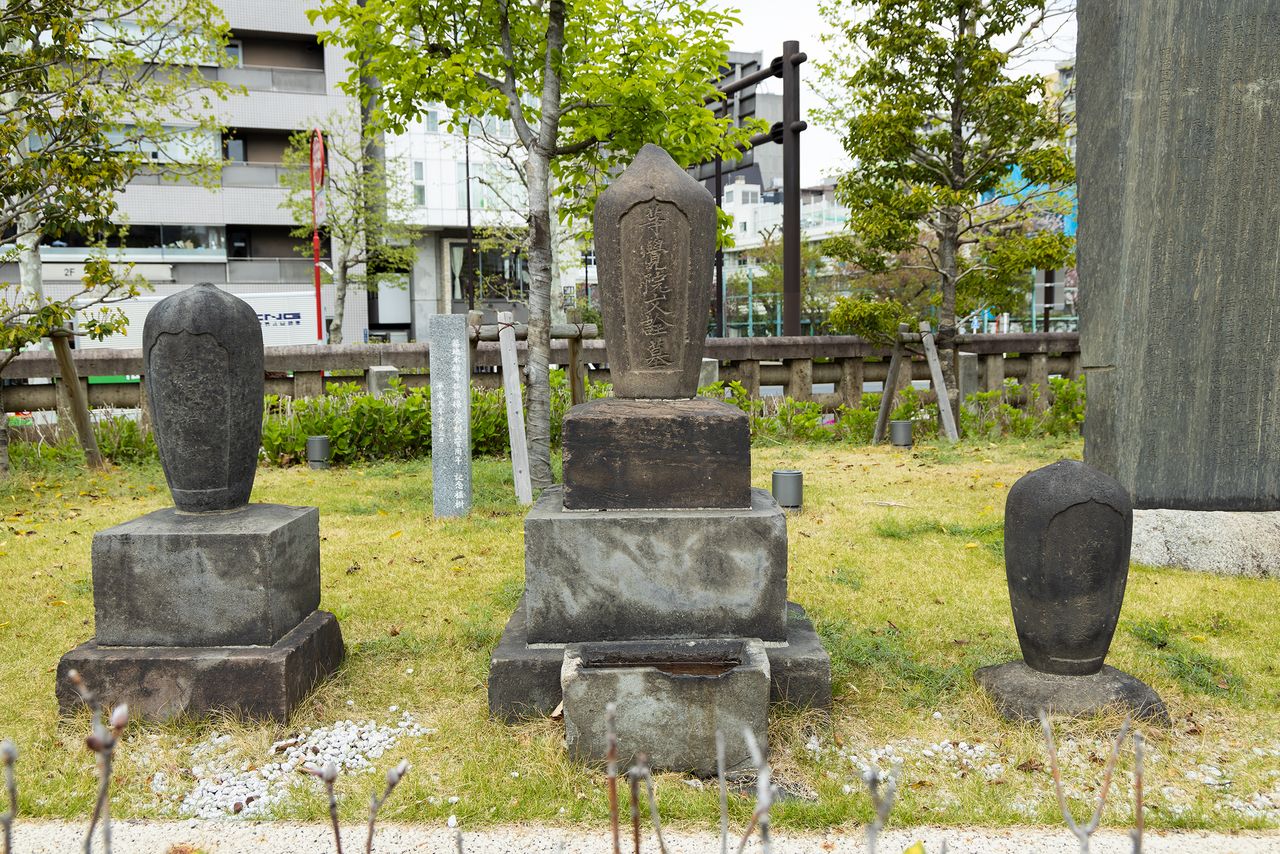 There are a number of graves of historical figures, including painter Sakai Hōitsu (1761–1829). 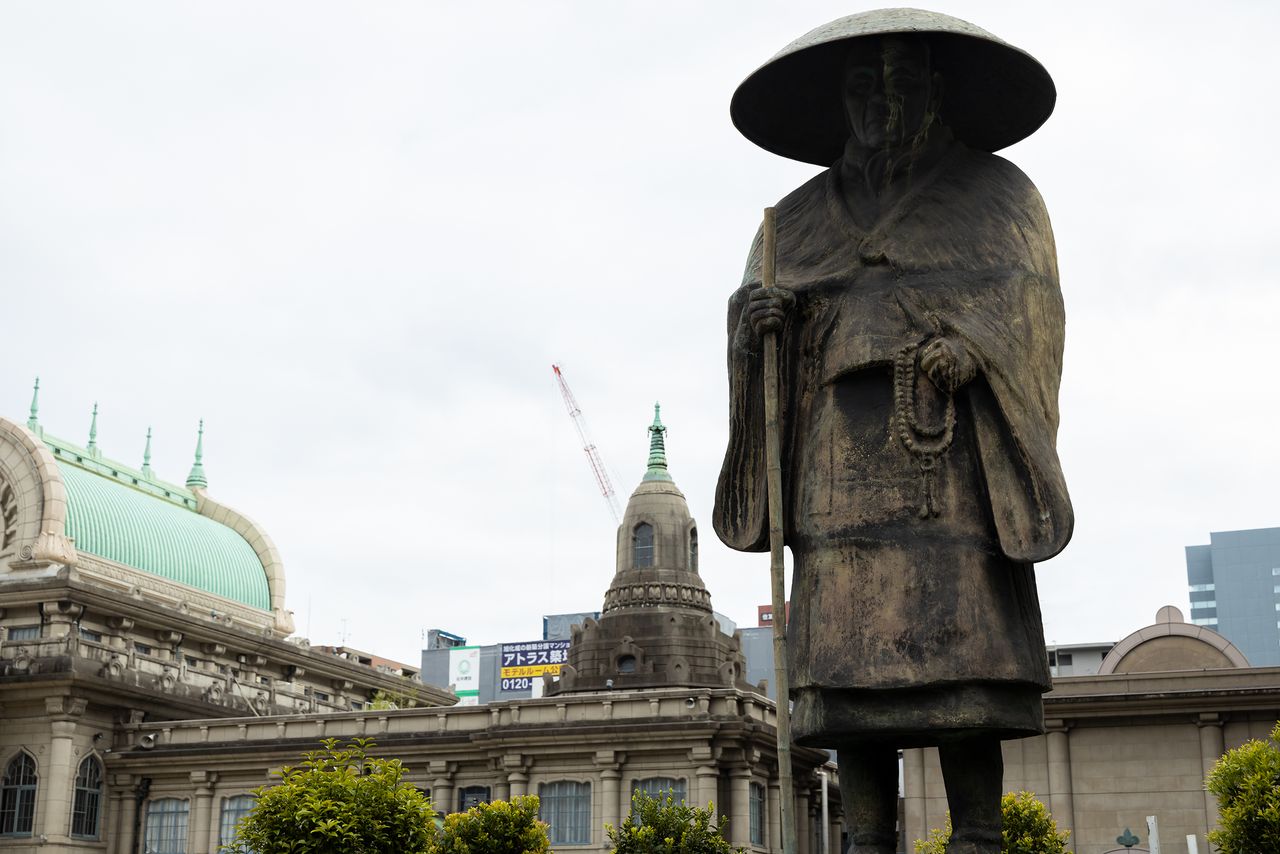 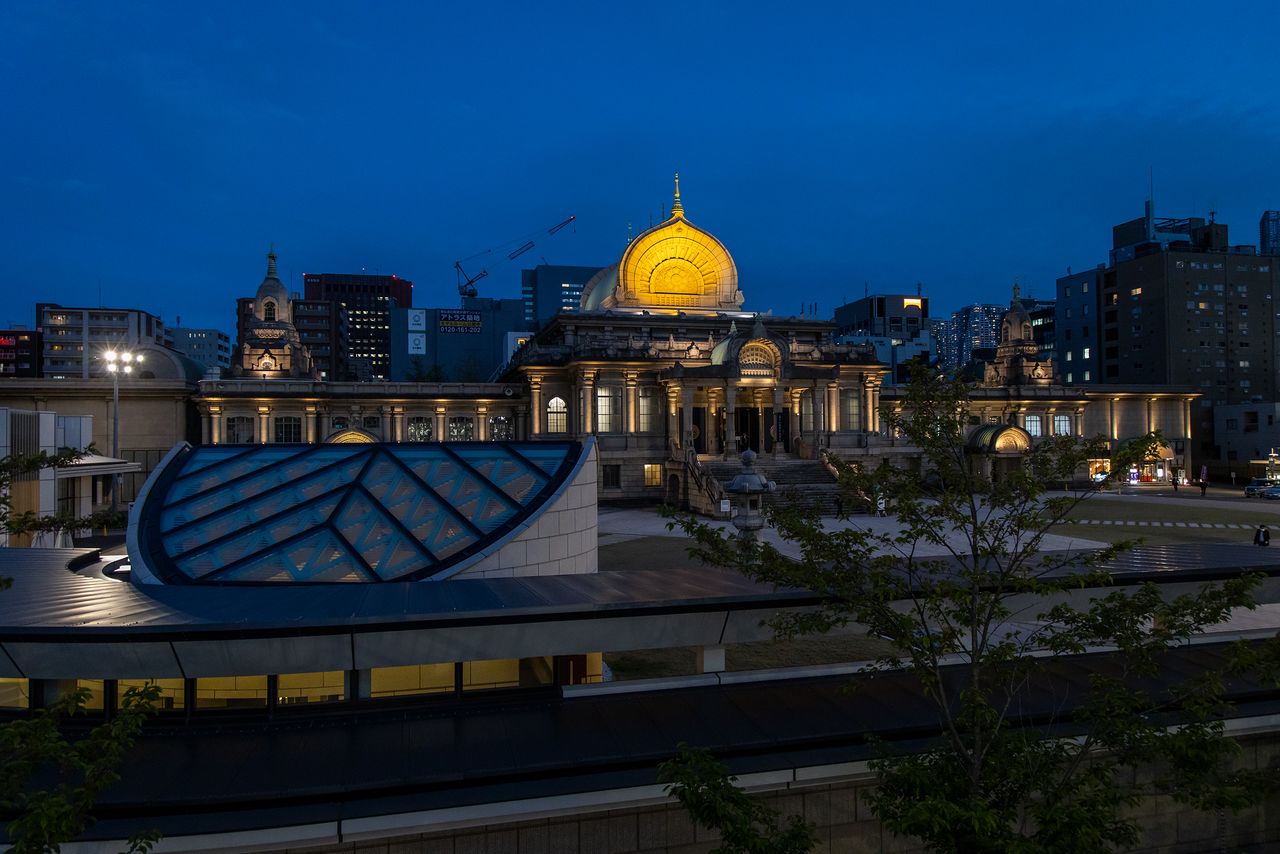 The dome of the hondō glows in the evening sky.

(Originally published in Japanese. Reporting and photos by Nippon.com.)