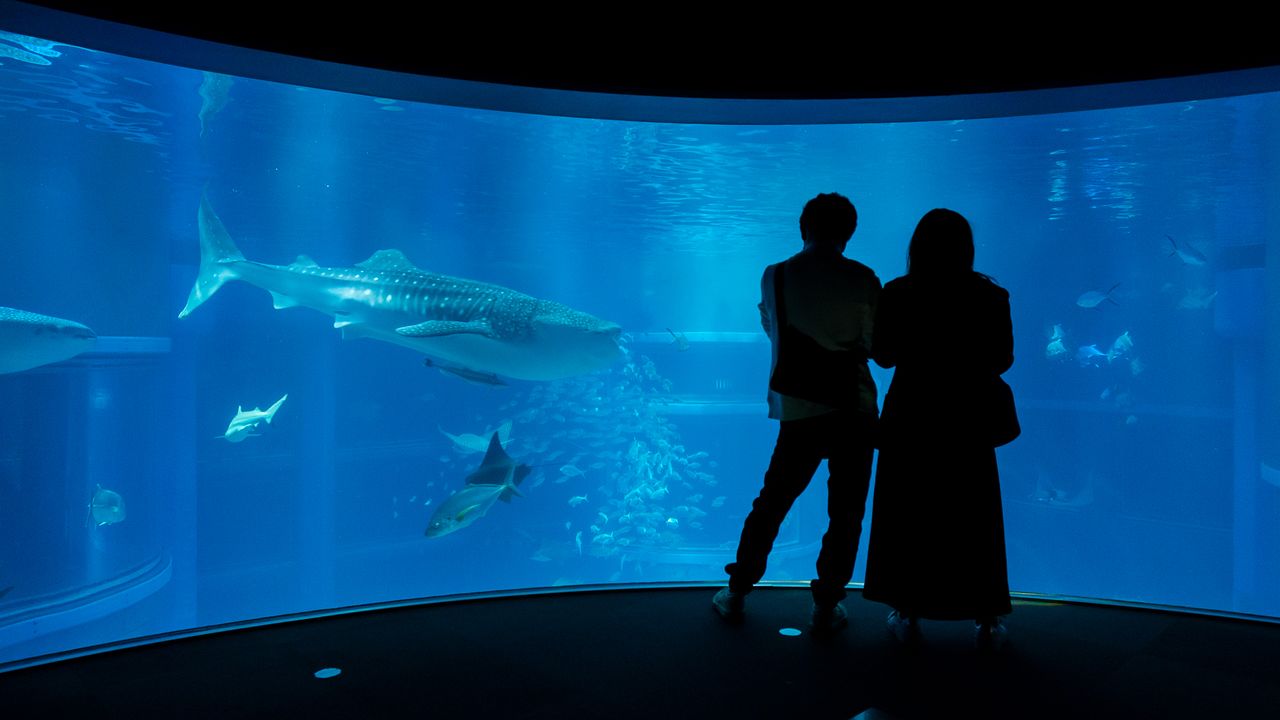 Travel Sep 10, 2021
Osaka aquarium Kaiyūkan is one of the city’s premier attractions, recreating habitats of the Pacific Ocean in giant tanks. Best-known for its whale sharks, it is also home to other fascinating sea animals, including gorgeous ringed seals and jellyfish. After 30 years, the aquarium’s popularity shows no sign of waning.

Just a five minute walk from Osakakō Station on the Osaka Metro Chūō Line, the distinctive blue- and red-banded building soars high on the ocean side of Harbor Village. The aquarium exhibits myriad aquatic creatures, focusing on the Pacific Rim. The building’s blue band represents the ocean, the “ring of life,” and the red band symbolizes the Pacific’s Ring of Fire, which skirts the edges of the encircling continents. 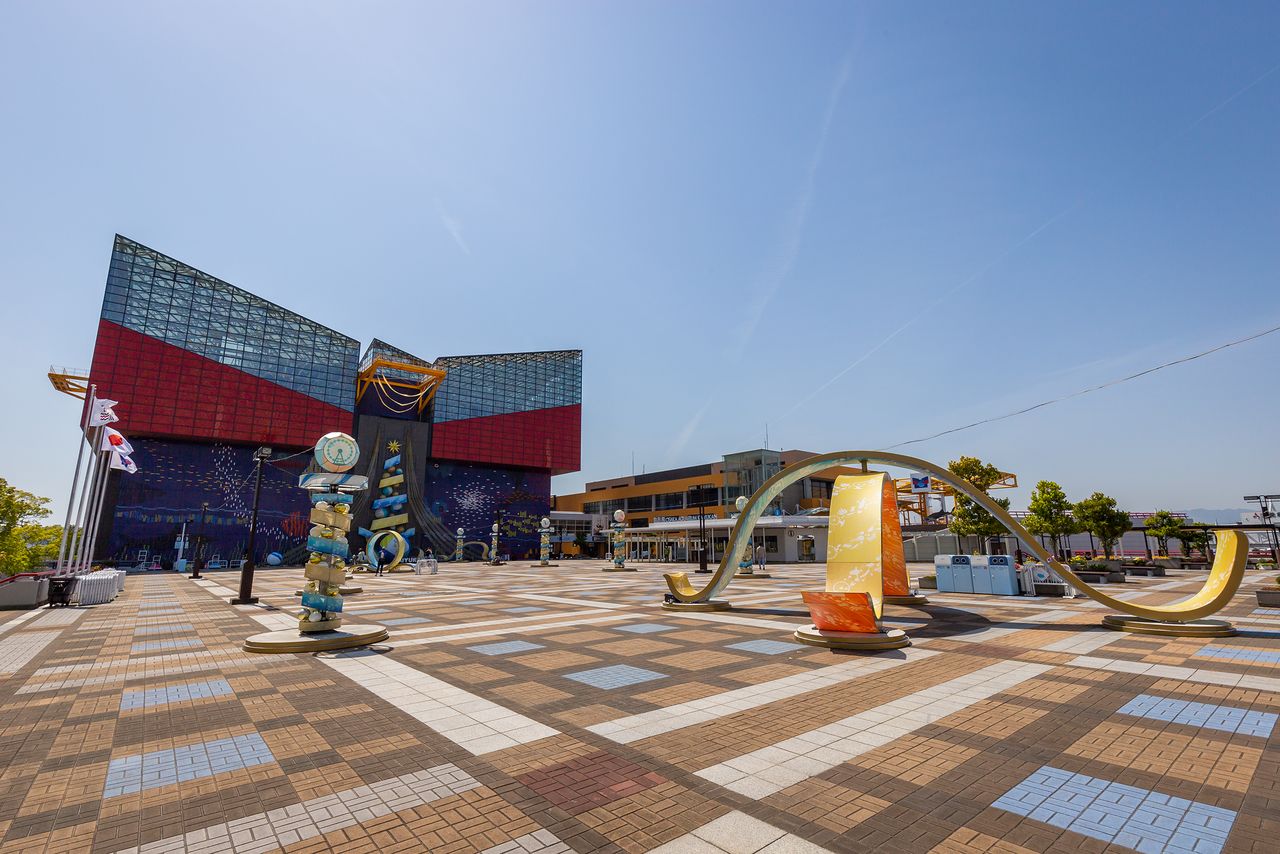 The aquarium viewed from the plaza in front of Tempōzan Marketplace. The orange structure on the right is the entrance building, containing the ticket counter and official shop. 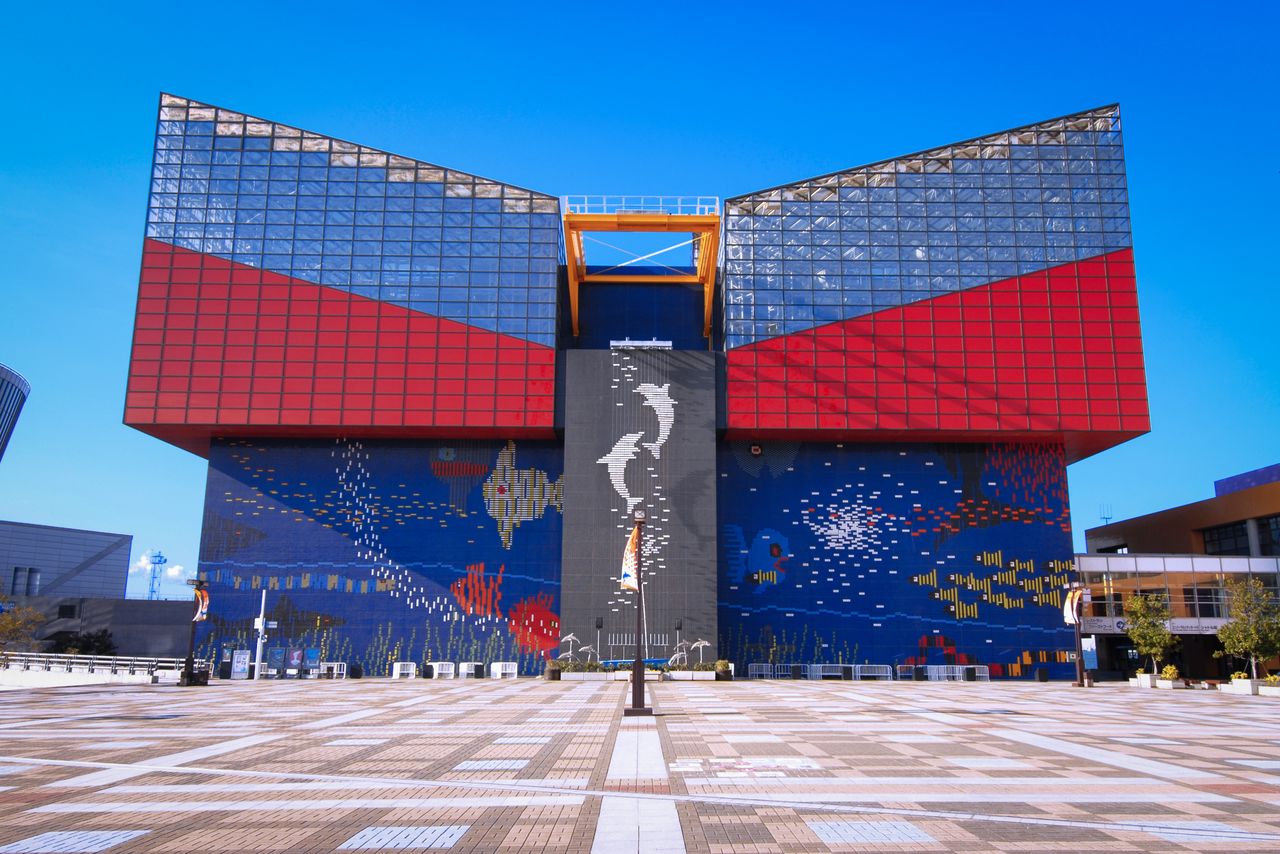 Since opening in 1990, the aquarium’s unique structure has made it a landmark of the Osaka bay area. (Courtesy of Kaiyūkan) 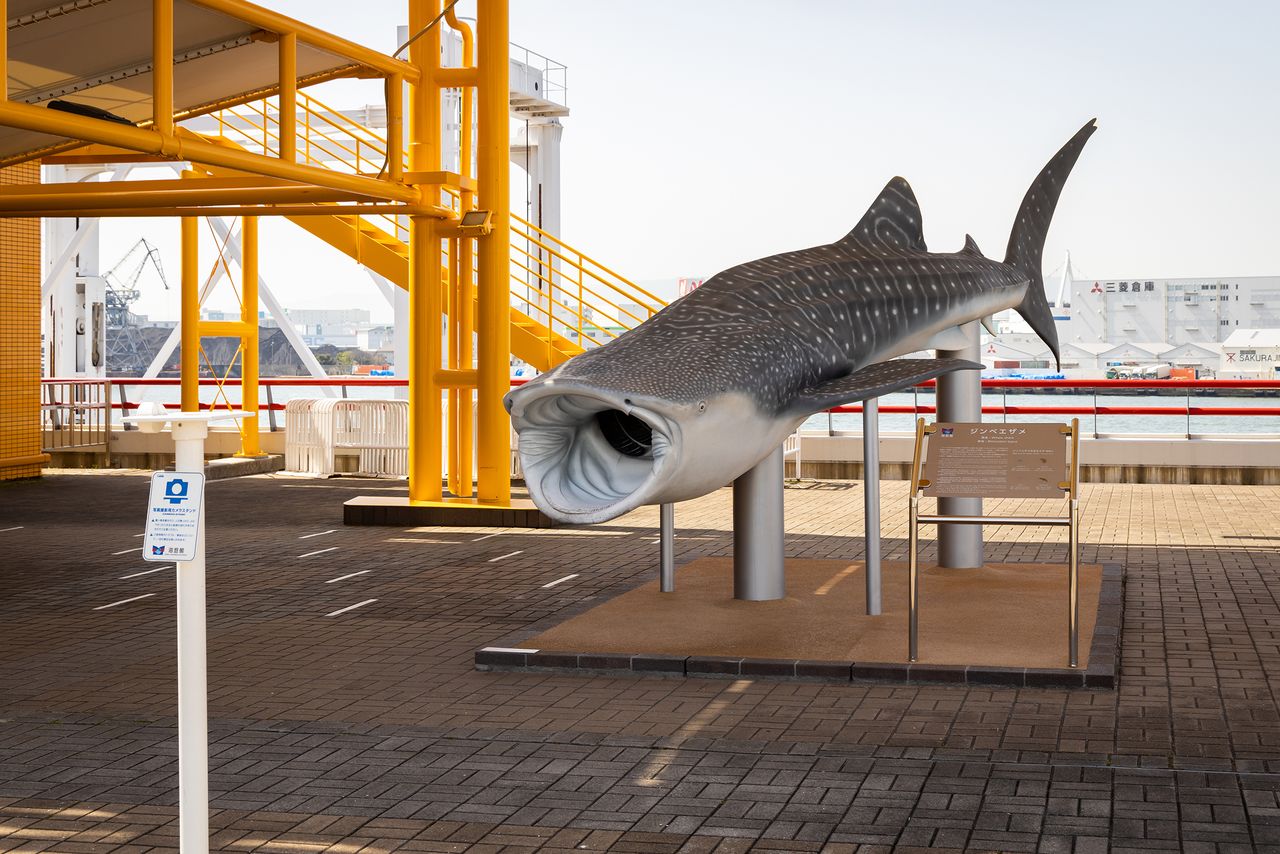 A full-scale model of a whale shark displayed on a landing near the entrance.

A Stroll under the Sea

Navigating the immense facility may seem daunting, but visitors need only follow clearly marked routes to find their way around. Elevators on the third-floor entrance whisk patrons to the eighth floor to start their tour. From there, a circular slope descends the building, passing between the aquarium’s giant tanks.

The eighth floor exhibit is dedicated to aquatic and other life found in Japanese forests. The area, bathed in natural light, features Asian small clawed otters. Continuing down the slope, the path darkens, and the tanks to the left display creatures from regions including the northern Pacific Aleutian Islands, California’s Monterey Bay, and continuing to Antarctica, with unique sea creatures and birds of each ecosystem.

The seventh floor tank recreates the environment close to the ocean surface, with sea lions frolicking on land and diving penguins. As visitors gradually descend to the sixth floor, they can enjoy the sensation of diving deeper into the ocean as they catch underwater glimpses of seals and penguins swimming about. 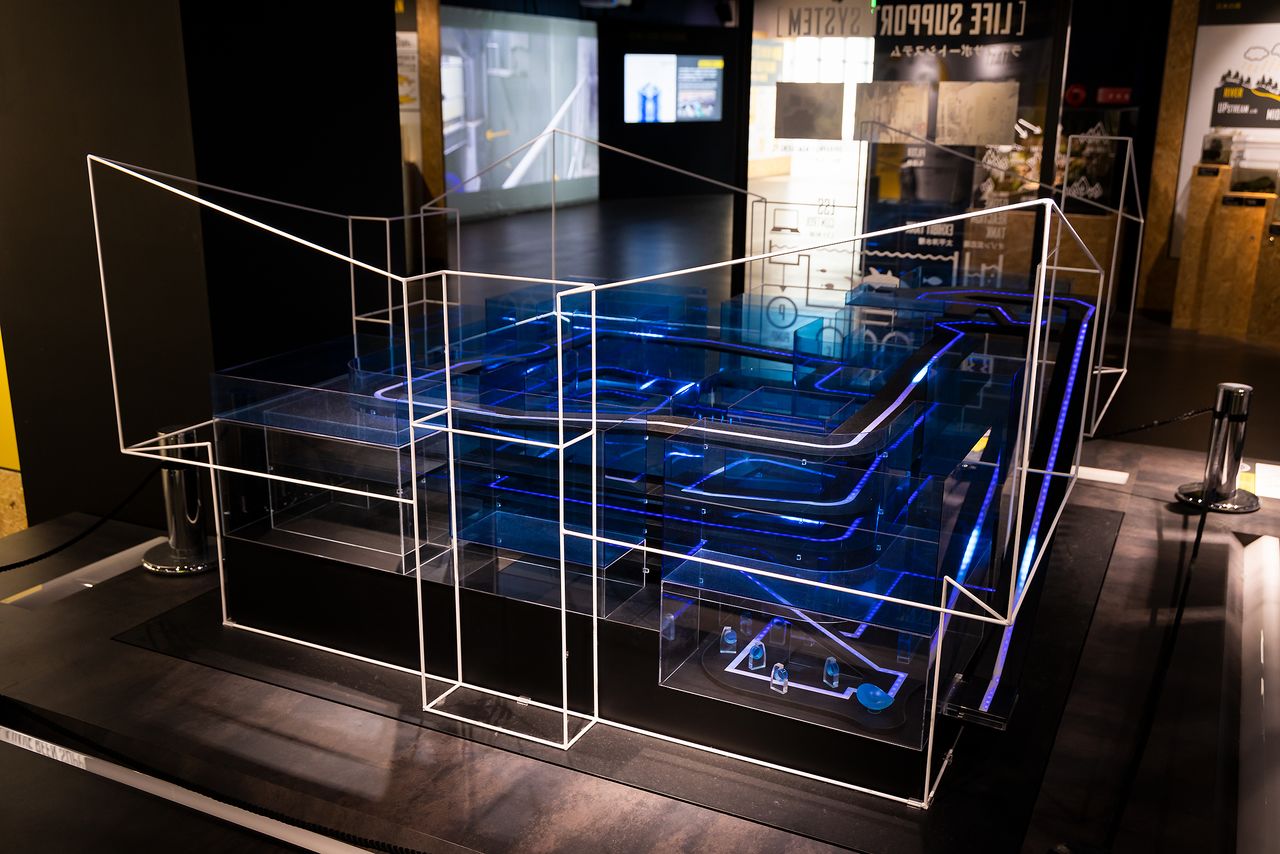 A model showing the structure of the aquarium. The blue light shows the visitor route. 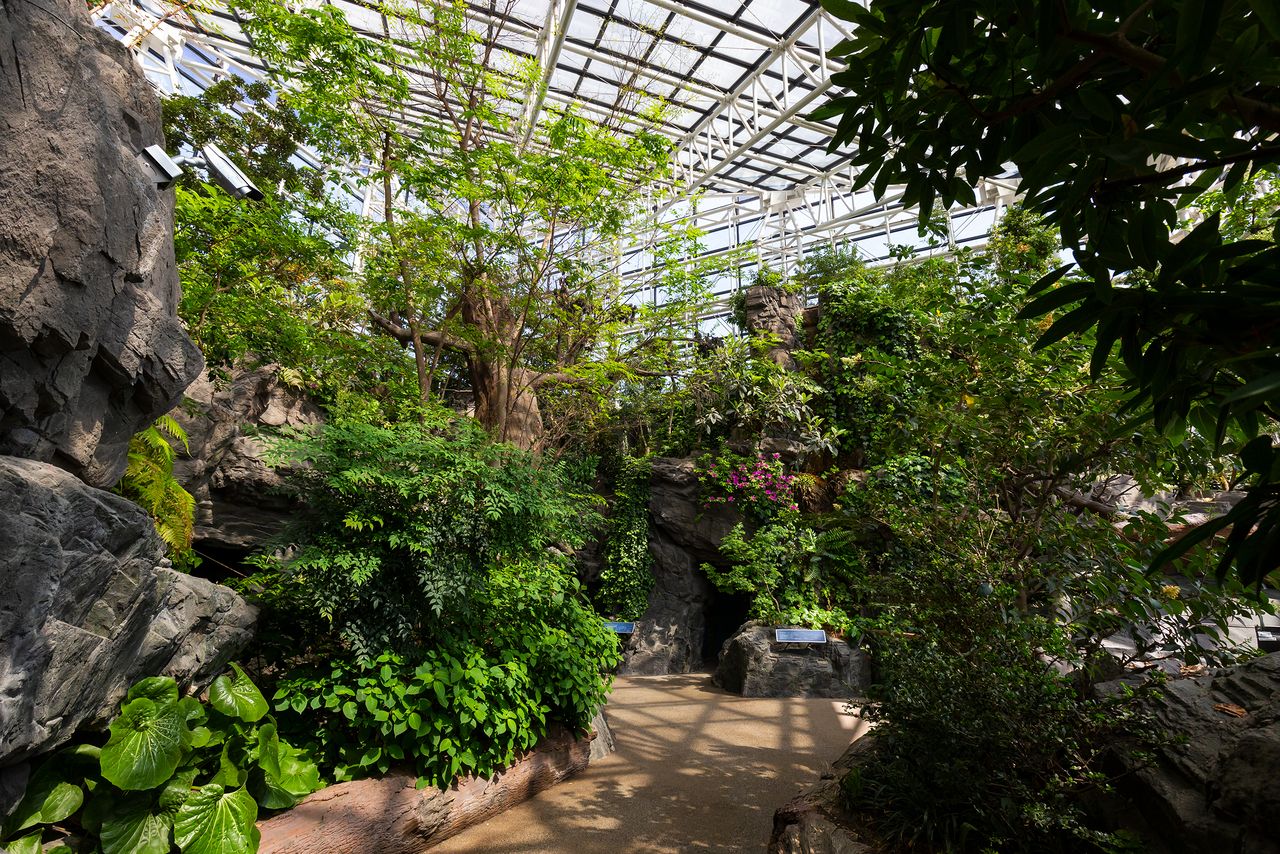 The Japanese Forest exhibit on the eighth floor. 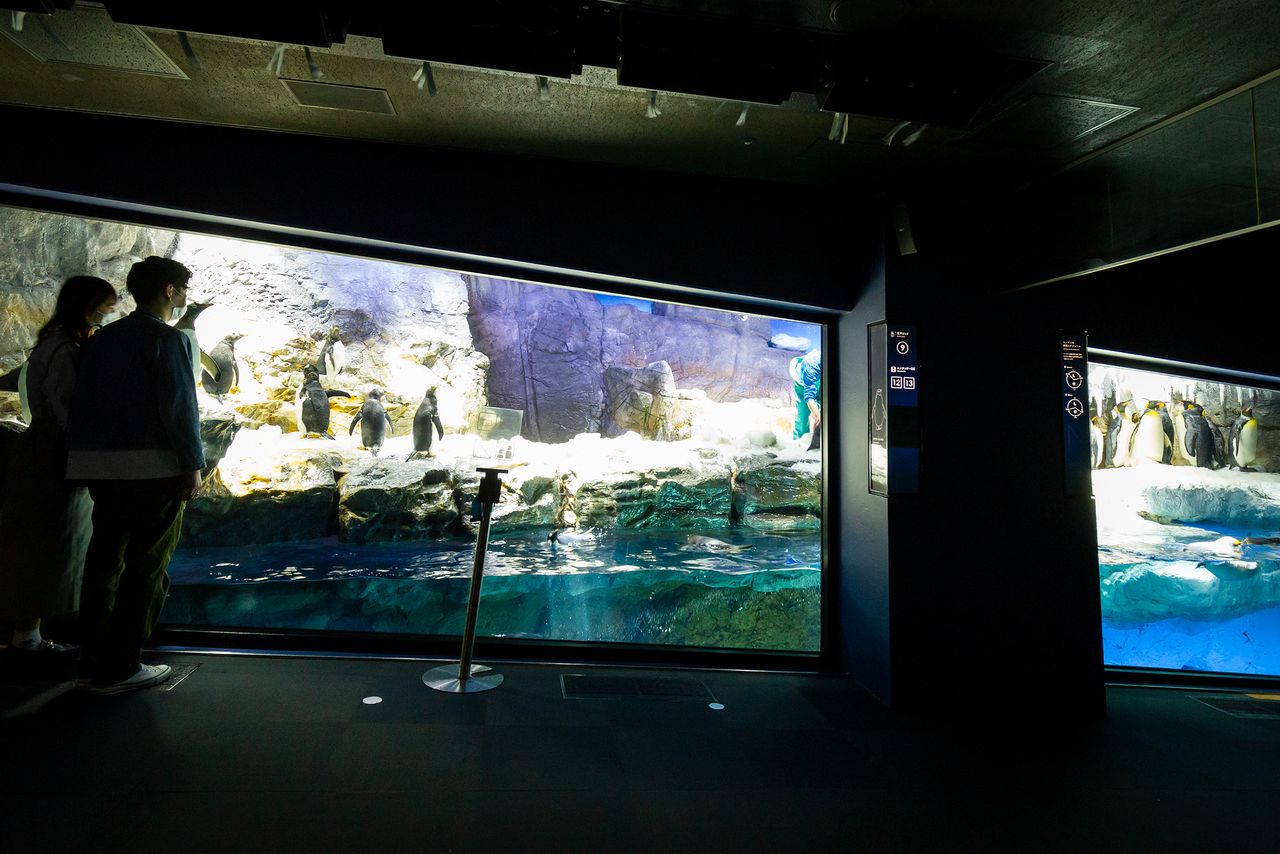 The Antarctica tank and its resident penguins. 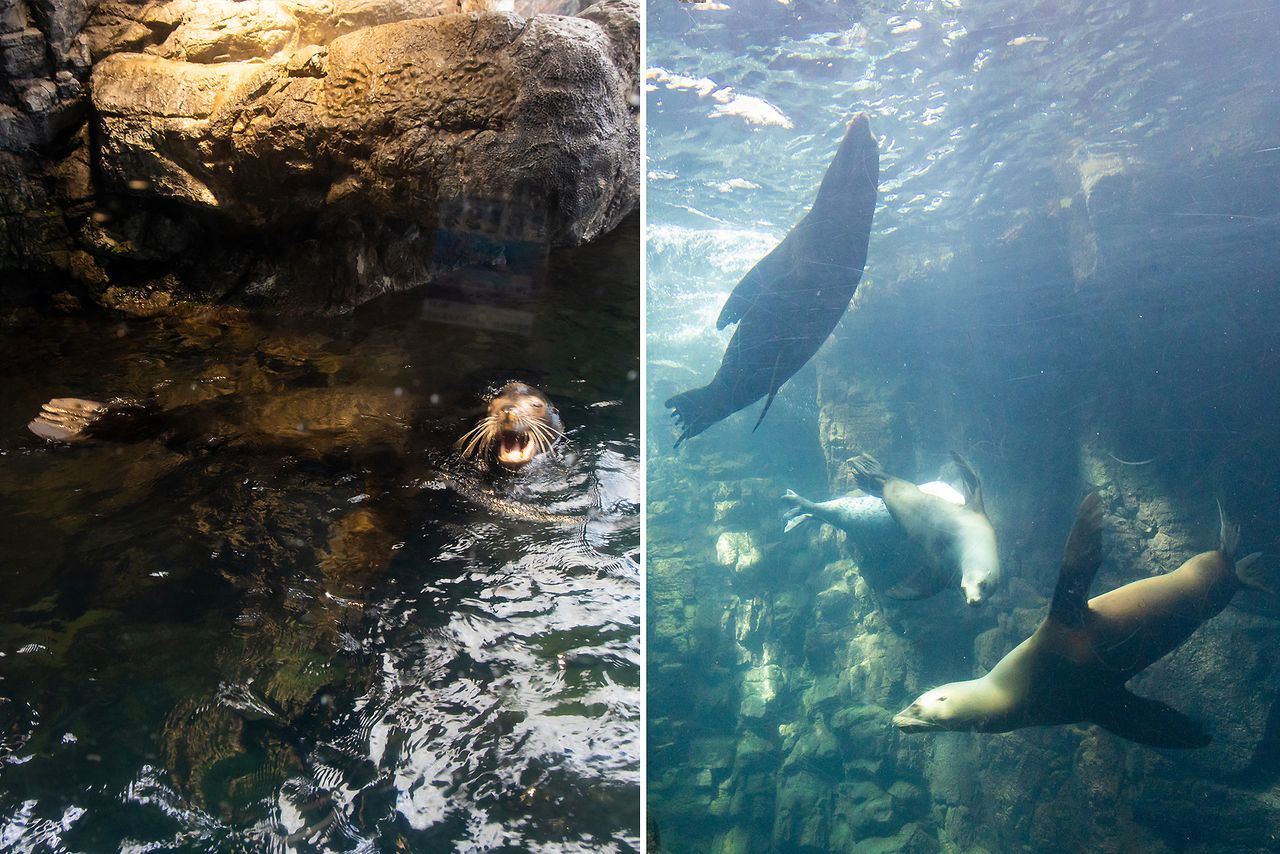 From above, California sea lions play on the water surface, while one floor below, they can be seen swimming underwater.

Whale Sharks and Ringed Seals are the Star Attractions

The central Pacific tank is enormous, measuring 34 meters across and 9 meters deep, and houses whale sharks, the world’s largest fish species. Whale sharks grow to over 12 meters in length, and different floors offer a view of their graceful movements of the creatures from various angles. Twice a day, at feeding time, they swim vertically to retrieve food from the water’s surface.

The whale sharks share their environment with other species, including scalloped hammerhead sharks, spinetail devil rays, and giant trevally. Each species has its own unique appeal, with some swimming in schools and others lurking in the lower depths. However, the imaginative design of Kaiyūkan lets visitors observe them all at eye-level. 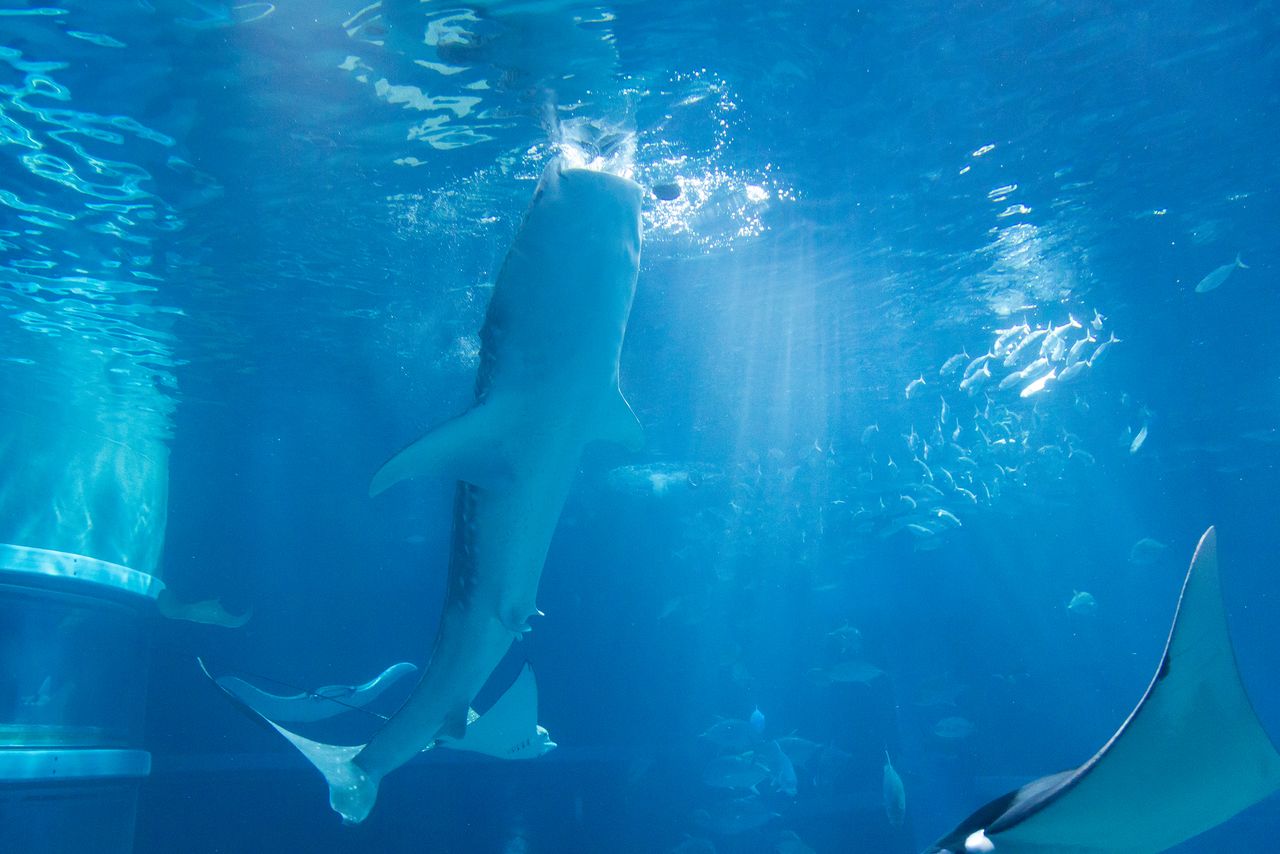 A whale shark gulps at the surface in search of food. 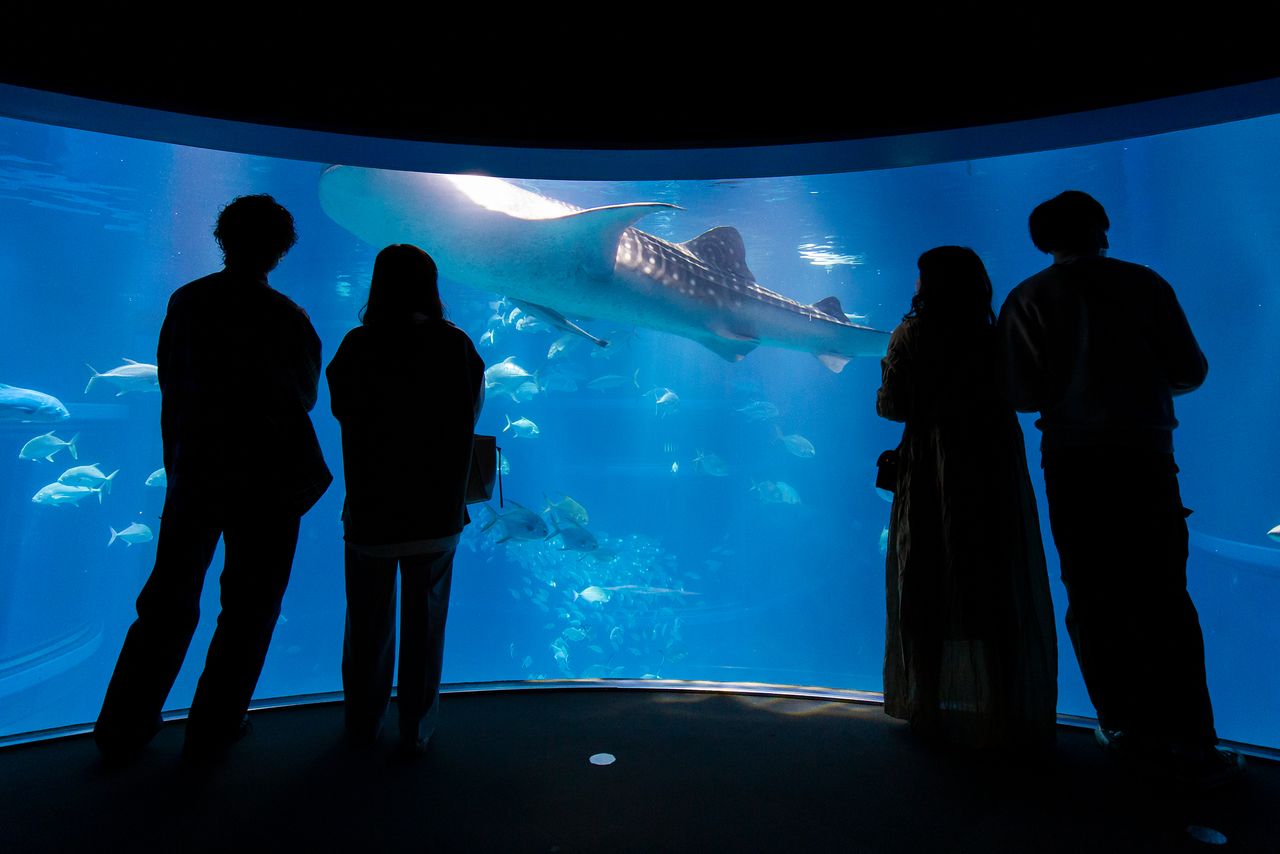 The Pacific tank, extends from the sixth to fourth floors and offers different angles in which to view tank inhabitants. 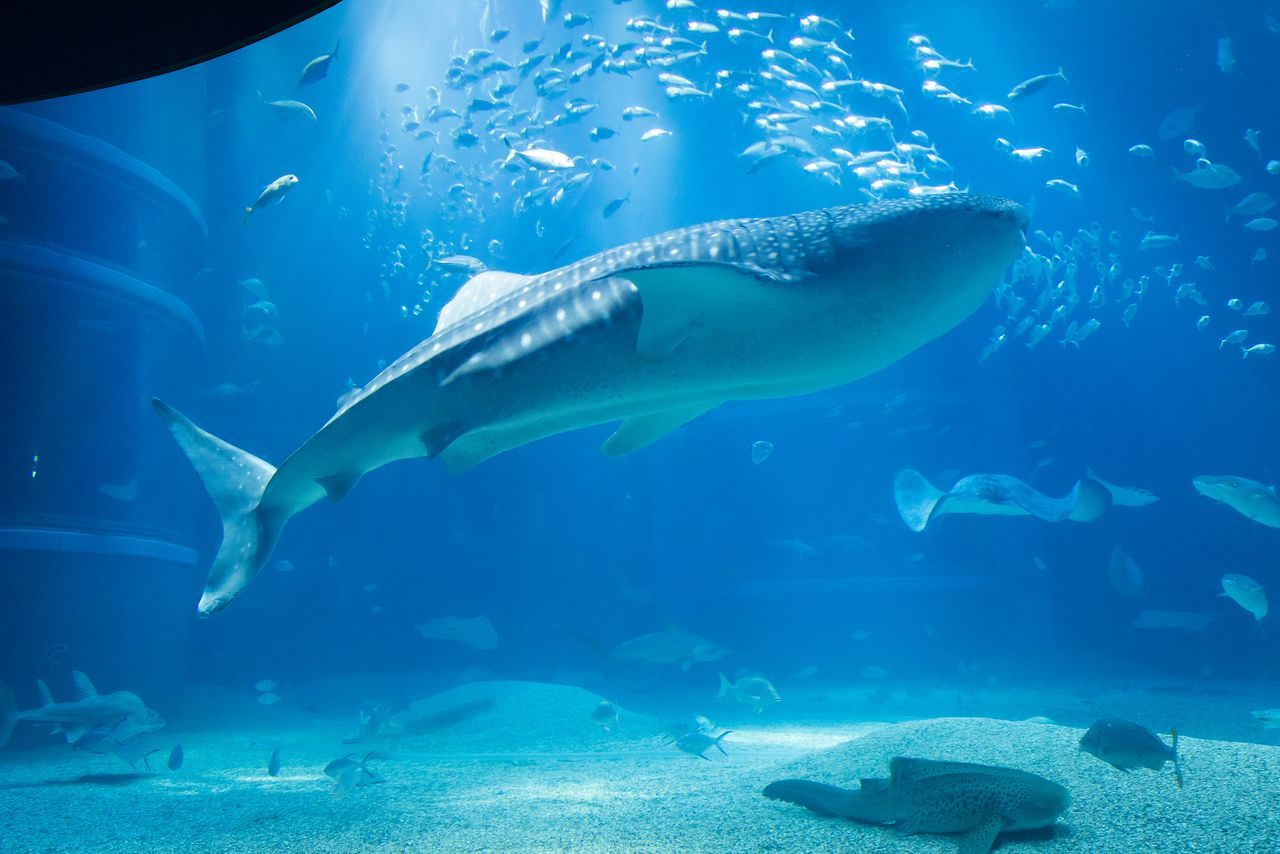 A whale shark and other fish drift near the floor of the exhibit.

The third-floor jellyfish tank and the aquarium’s new ringed seal attraction are popular draws. The jellyfish swim against a pitch-black backdrop and are illuminated by 700 ceiling lights that flicker dimly so that only the creatures are visible. Visitors are spellbound by the otherworldly sight of the jellyfish, which appear to be floating in outer space.

Ringed seals, from the Arctic region, are the smallest variety of seal. Kaiyūkan’s chubby ringed seals, Yuki and Arare, are star attractions. They frequently peek through the third floor ceiling-dome, to the delight of onlookers. 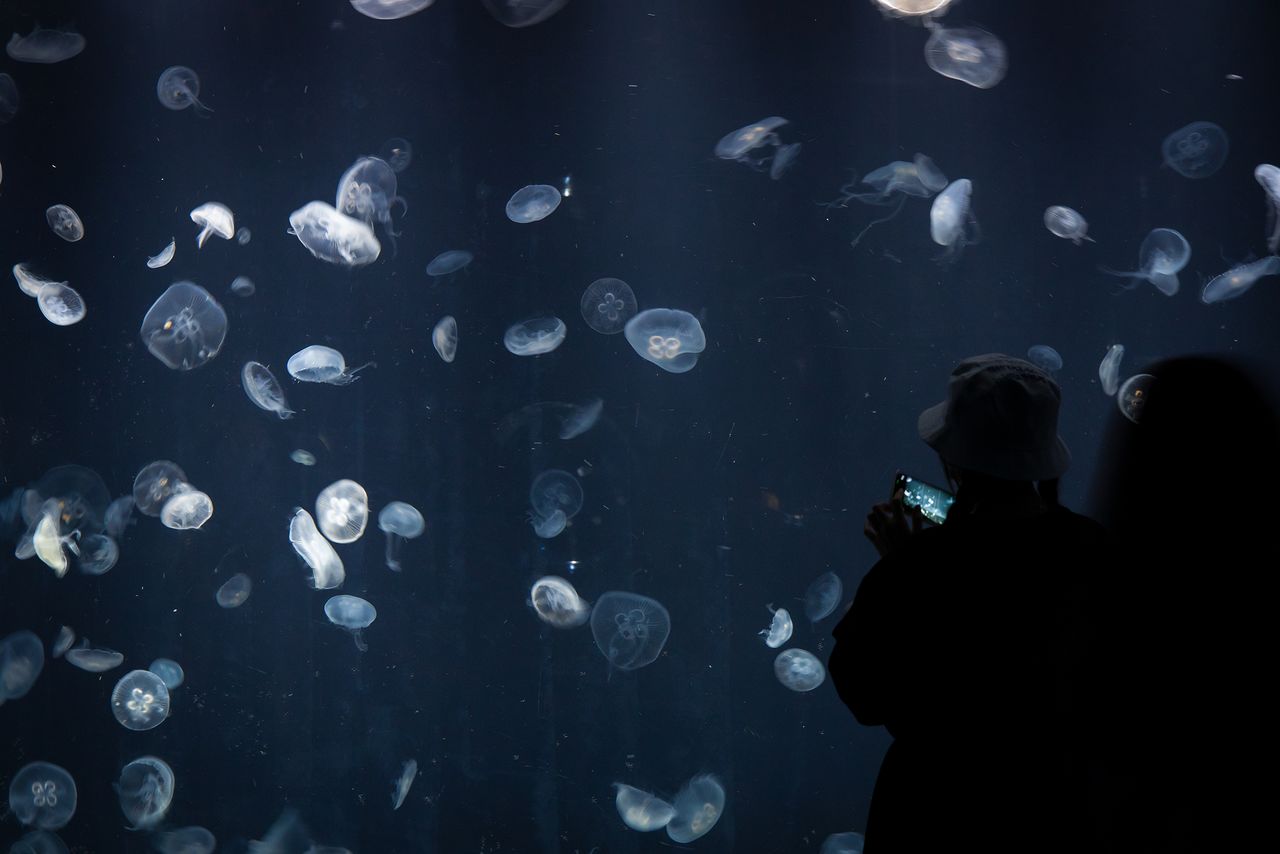 Jellyfish appear to be floating in outer space. 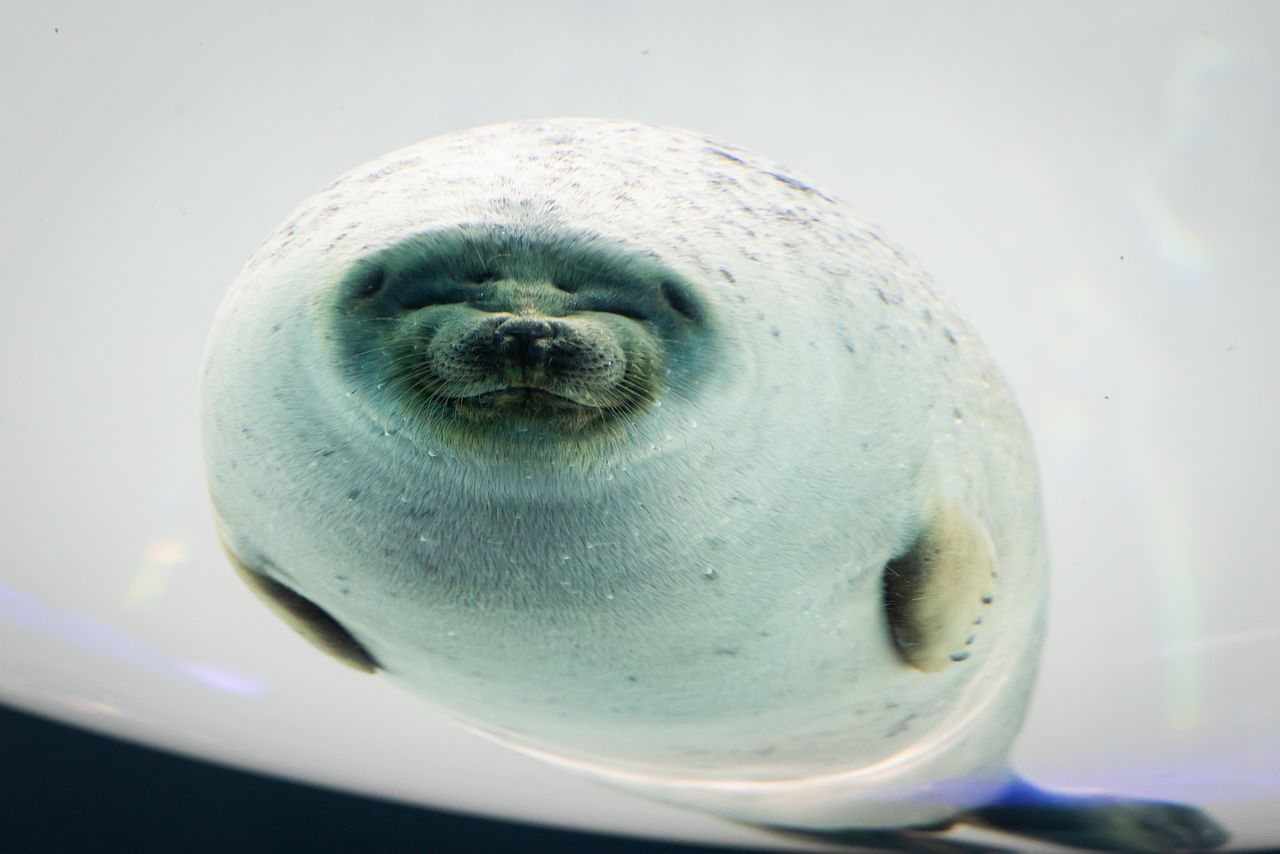 Ringed seals peer down at visitors through a dome-shaped window. 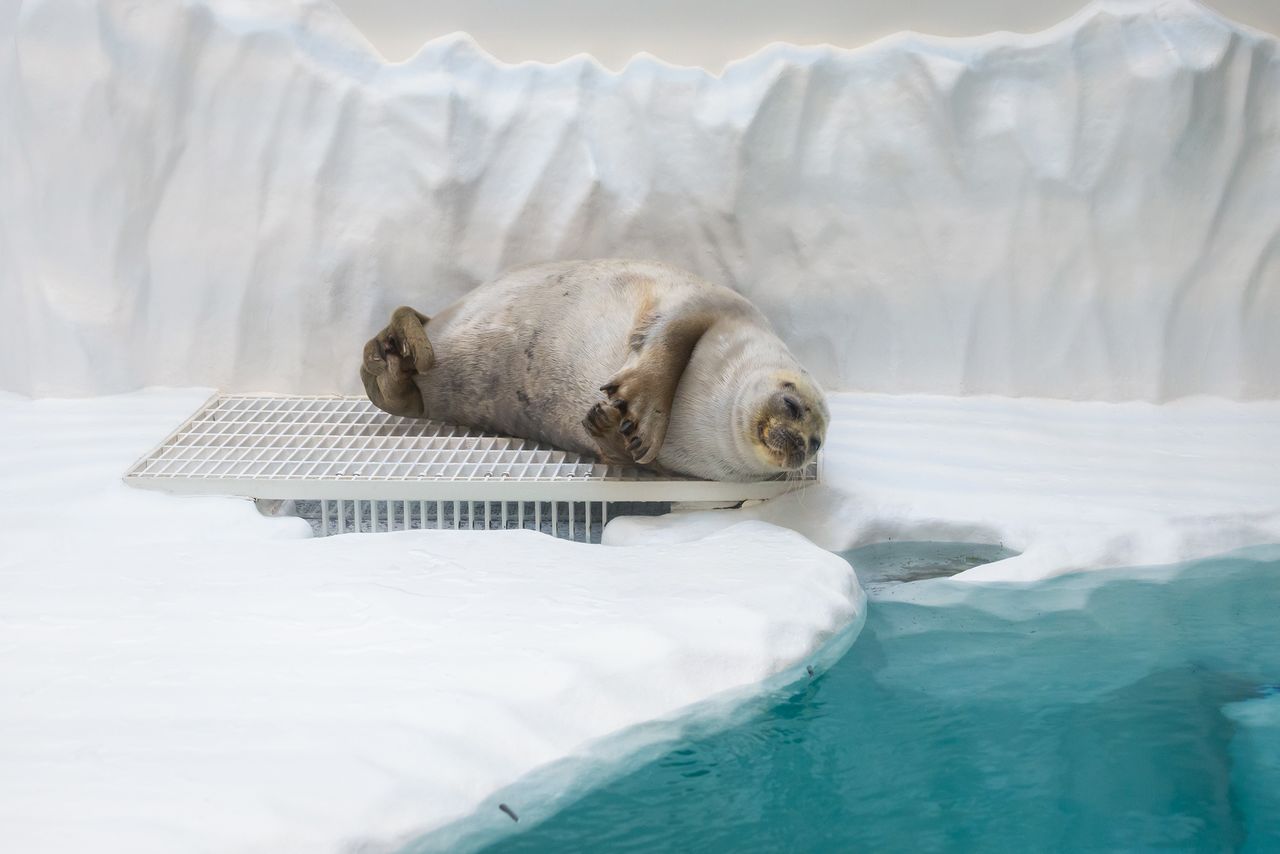 The Kaiyūkan official shop sells a range of unique souvenirs, including ever-popular ringed seal and whale shark cuddly toys. The cafe serves refreshments, such as whale shark-themed soft-serve ice cream and other treats.

Within neighboring Tempōzan Marketplace is a back alley-style food court featuring renowned Osaka eateries and local fare like okonomiyaki, takoyaki, and curry rice with Worcester sauce topping. The Harbor Village is home to a giant Ferris wheel, a cruise ship, the Legoland Discovery Center, and many other attractions. 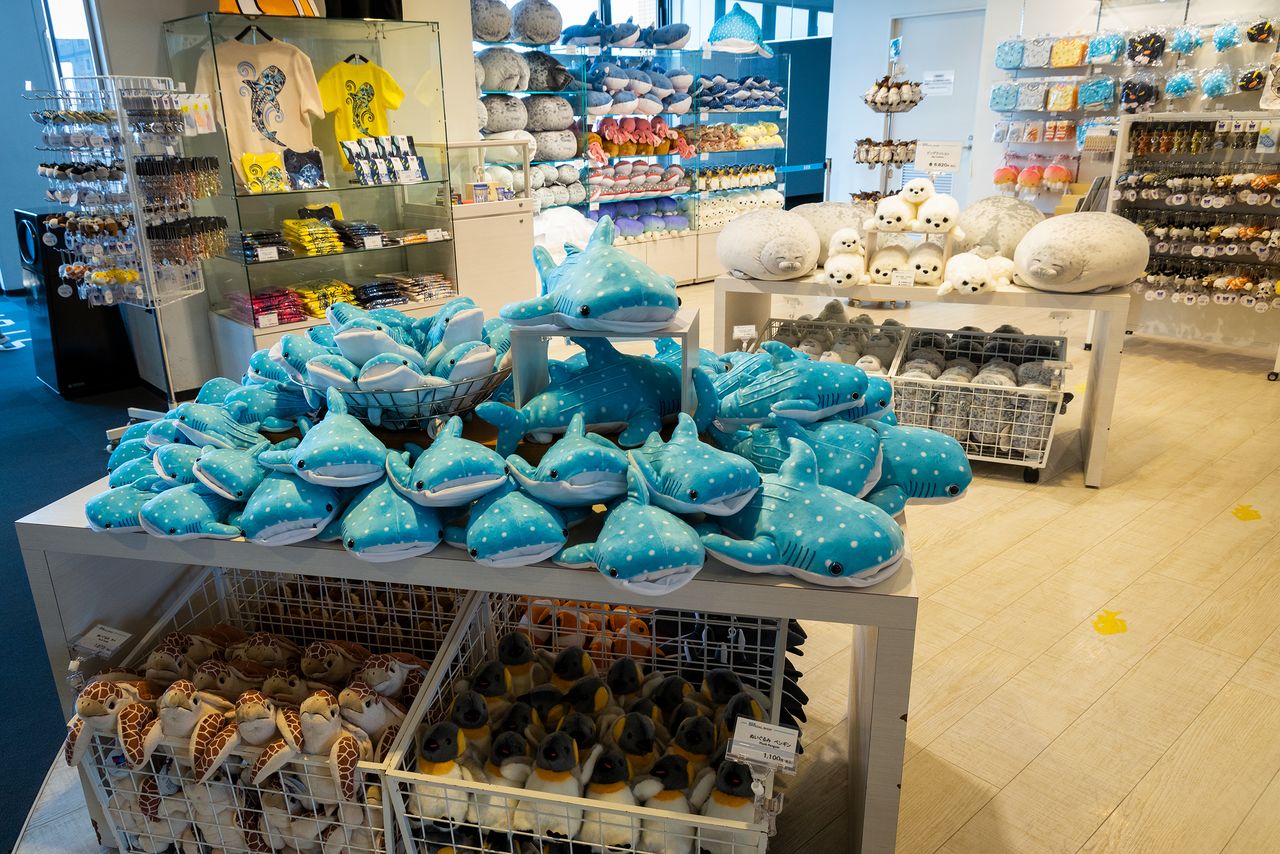 The official shop on the third floor sells exclusive Kaiyūkan souvenirs, including soft toys and stationery. 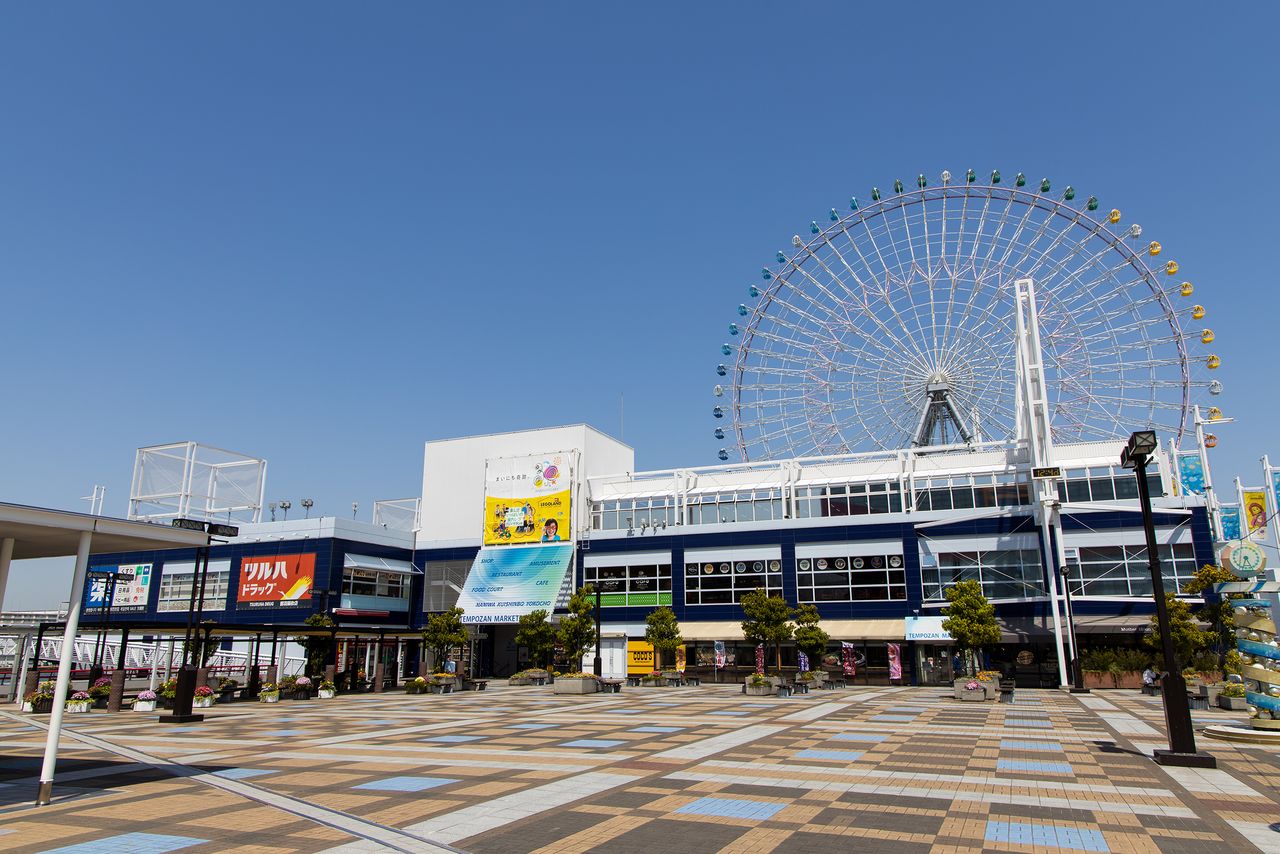 Legoland Discovery Center is a popular attraction within Tempōzan Marketplace. 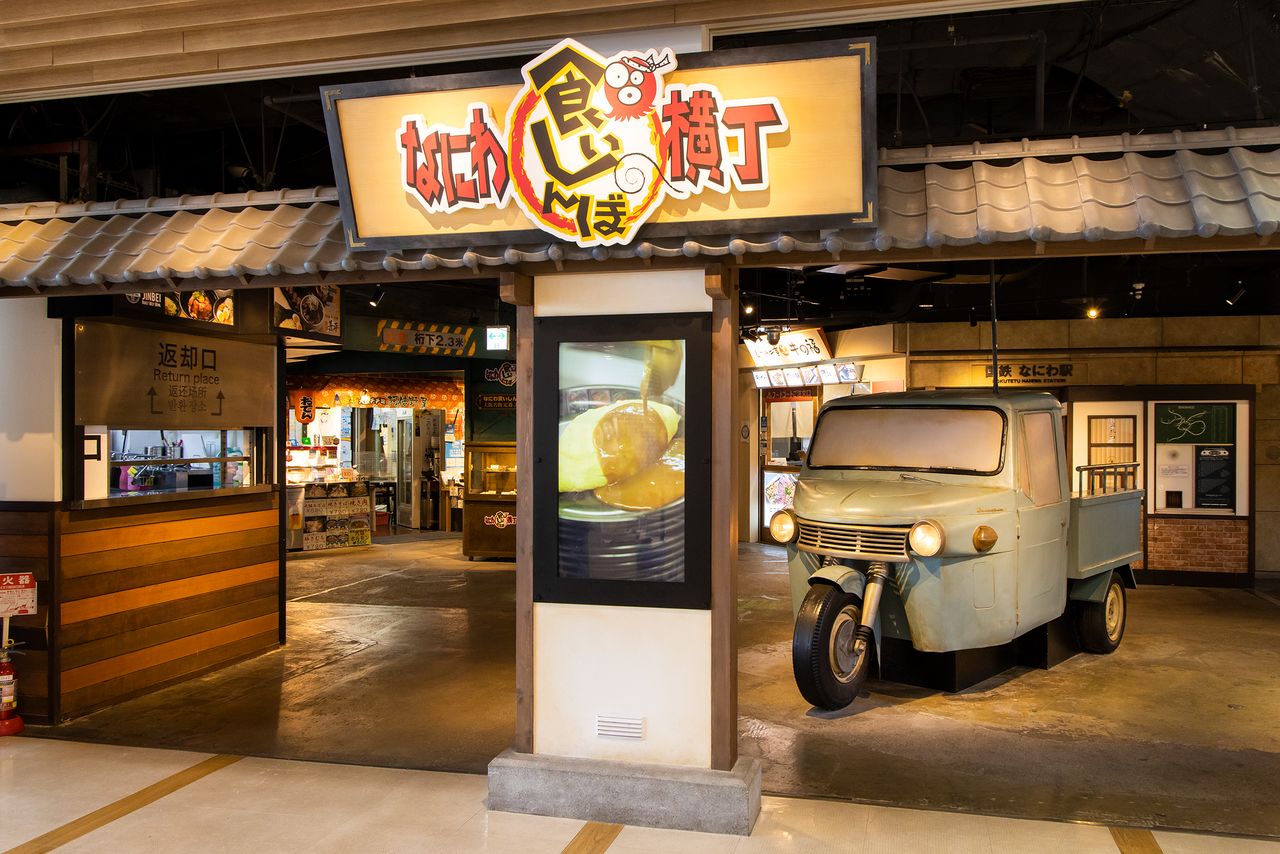 Naniwa Kuishinbō Yokochō recreates the atmosphere of old Osaka eateries, to the delight of hungry visitors.