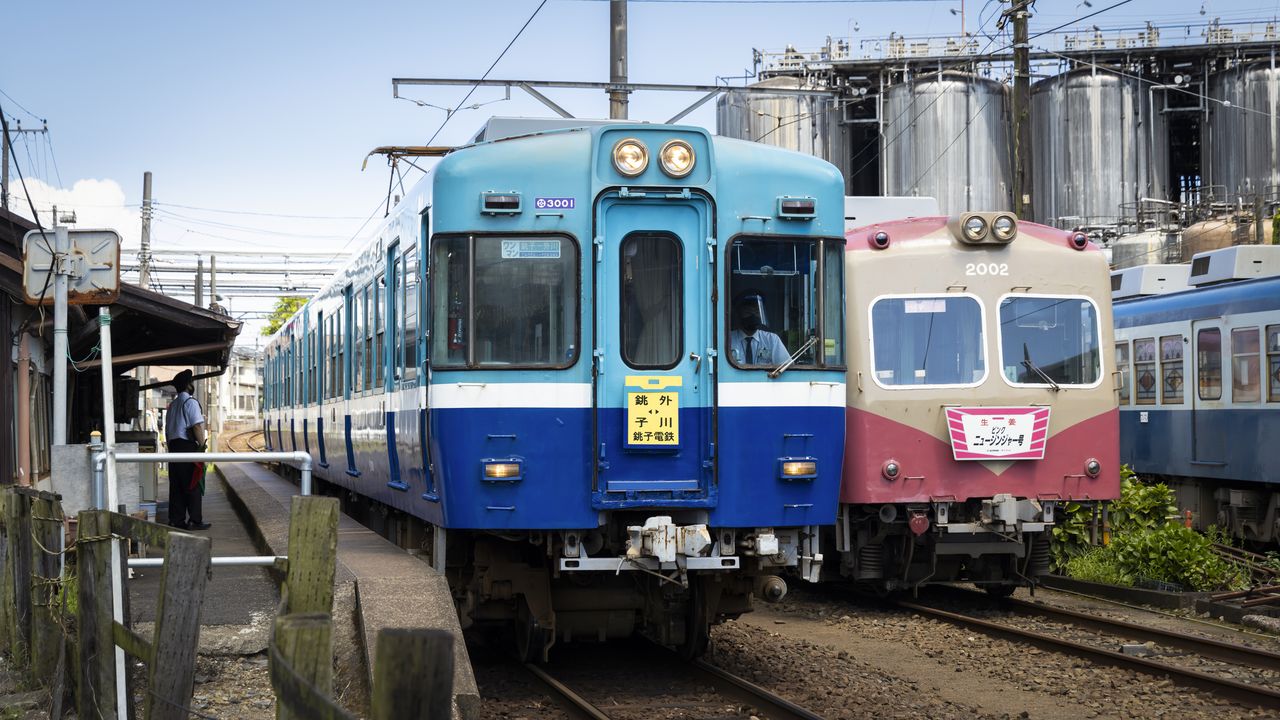 Catch a Ride on the Chōshi Electric Railway

Travel Sep 17, 2021
The Chōshi Electric Railway, a local line that serves the busy fishing port town of Chōshi in Chiba Prefecture, has tackled its declining ridership and revenue woes in unconventional ways. Aside from transporting passengers, it attracts customers with imaginative public relations gimmicks and a lucrative snack food side business.

Chōshi in Chiba Prefecture is known for its dramatic ocean vistas and rich fishing grounds. Located on a spit of land along the rugged Pacific coast, it juts into the ocean in an area where the warm and cold currents collide, nurturing sea life in abundance. It has been a major fishery since the seventeenth century, and today its fishing port lands more fish than any other in Japan

In the past, the town’s location at the mouth of the Tone River estuary, Japan’s largest river basin, made it a major depot for goods transported by sea from the Tōhōku region to the north. Another important local industry was soy sauce brewing, with major producers Higeta and Yamasa based in Chōshi. 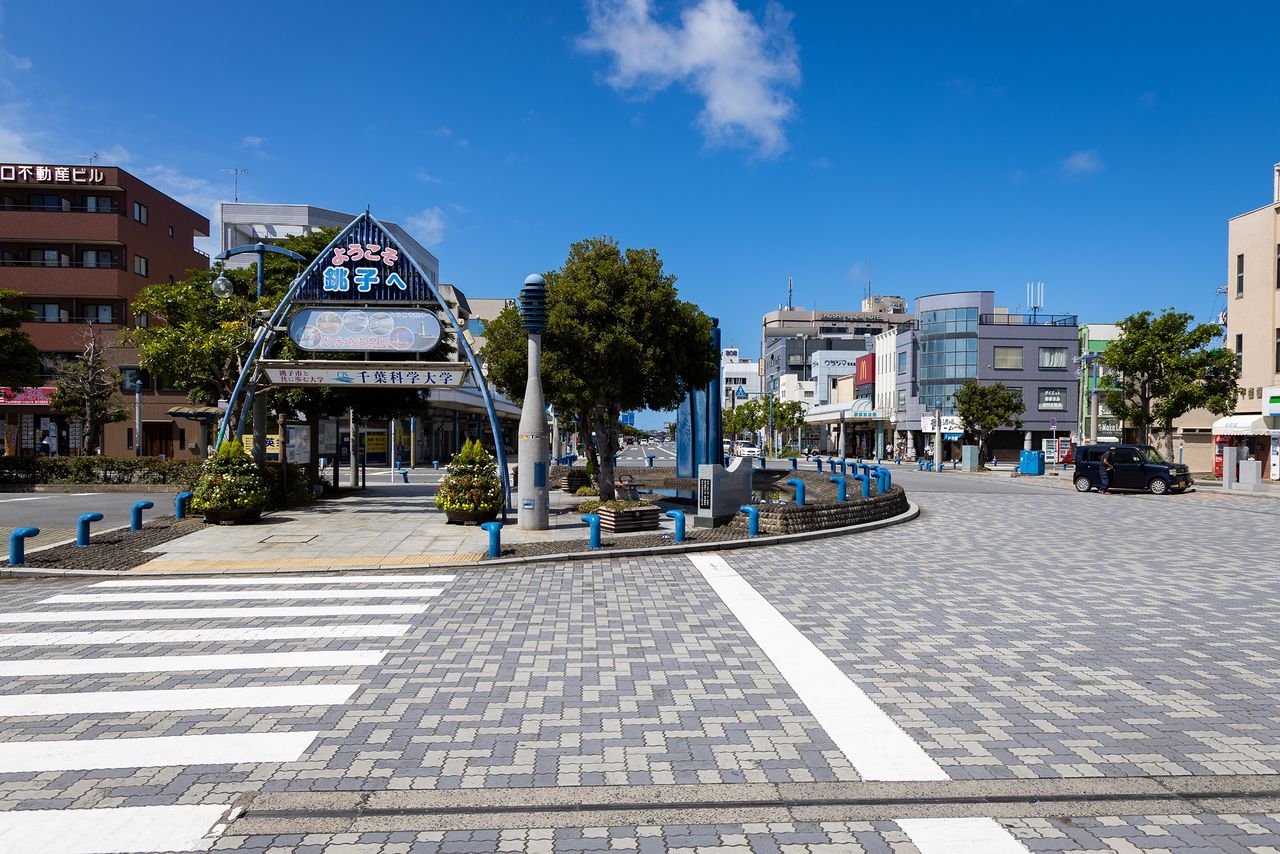 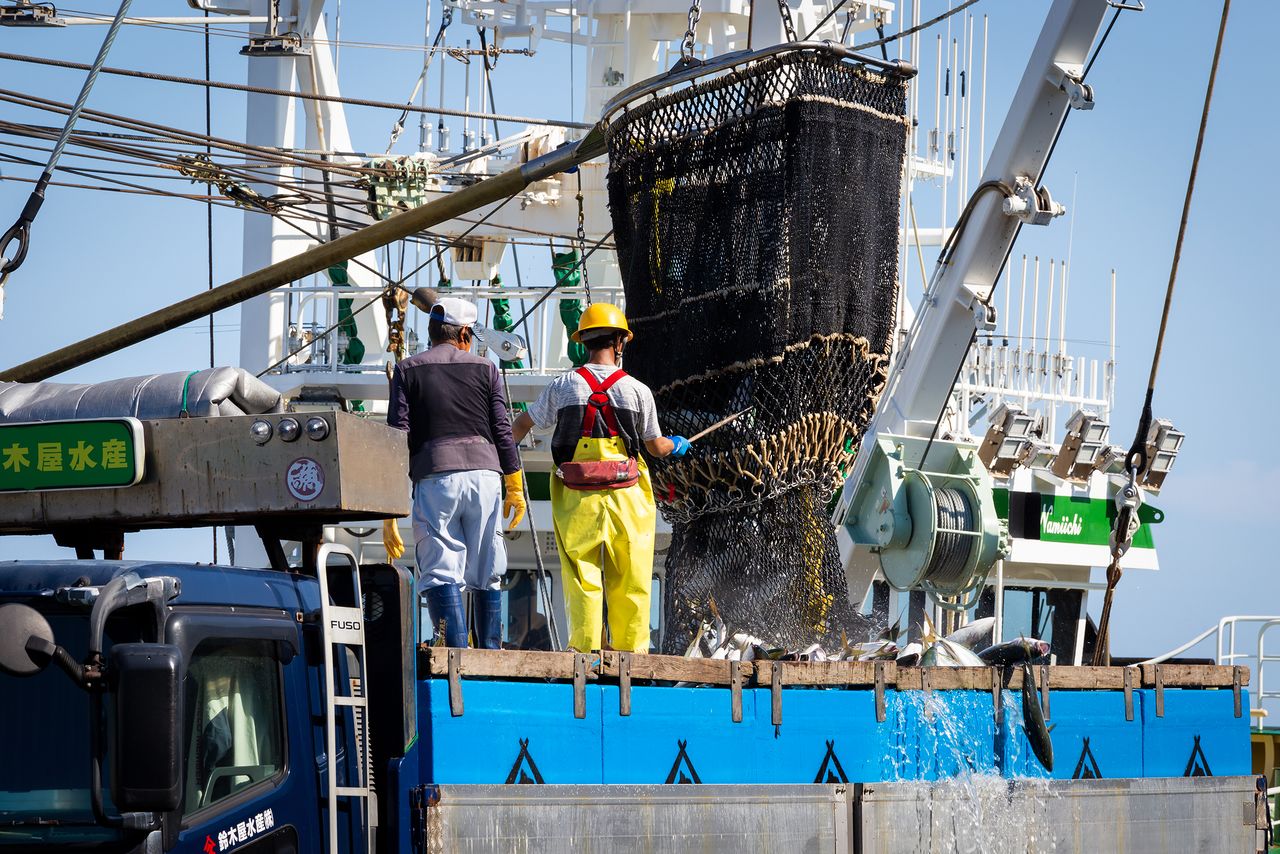 A fishing boat unloads its catch at Chōshi Port.

In the 1860s, Chōshi was a major population center, but like many other rural communities around Japan, the number of inhabitants has dwindled over time. The city boasted a population of more than 90,000 in 1965, but by 2020 it had dropped to fewer than 60,000.

The Chōshi Electric Railway has long served the transportation needs of the local community. Known affectionately as “Chōden,” it began operating in 1923 as the successor to the Chōshi Sightseeing Railway, which opened for a brief time in 1913. The 6.4-kilometer-long line runs from Chōshi Station in the center of town to Tokawa Station, near Tokawa Port, the forerunner of Chōshi Port, covering the distance in 20 minutes. Today, the railway is an essential component of Chōshi tourism, popular for unique souvenirs, old-fashioned railcars and station buildings, and a route wending through tranquil countryside. 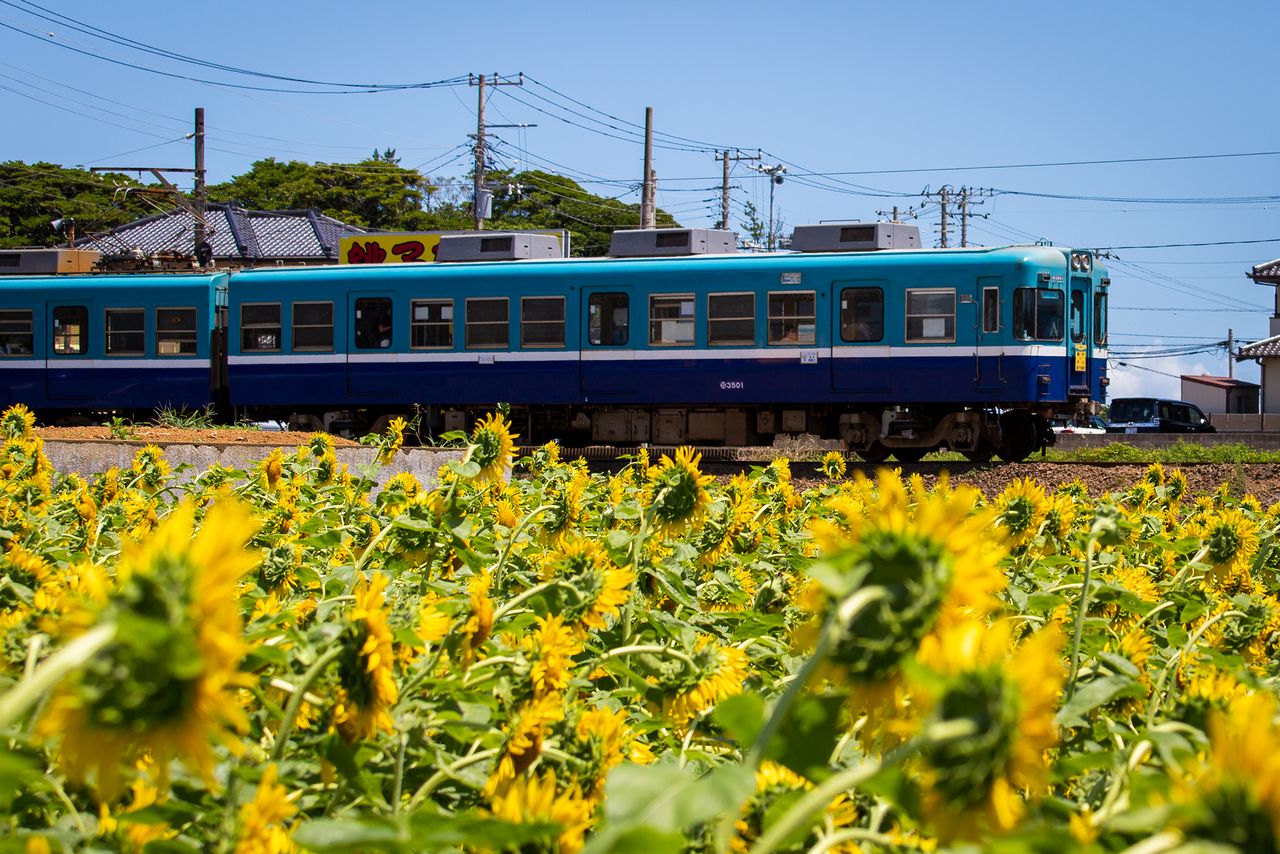 A Chōden train speeds by a field of sunflowers.

Long in precarious financial condition, Chōshi Electric Railway made national headlines in 2006 with the success of its Chōden-branded nure senbei, a popular type of rice cracker that is moist rather than crunchy.

Due to population decline, by the 1990s annual ridership had fallen to under 1 million, down from over 2.5 million in the 1960s. To bring in extra revenue, the railway hatched a plan of producing rice crackers, brushed with locally-produced soy sauce, as a side business. It built a plant for that purpose and launched the product in earnest in 1997. By the following year, cracker sales had already reached more than ¥200 million, far above the ¥100 million in revenue from ticket sales. 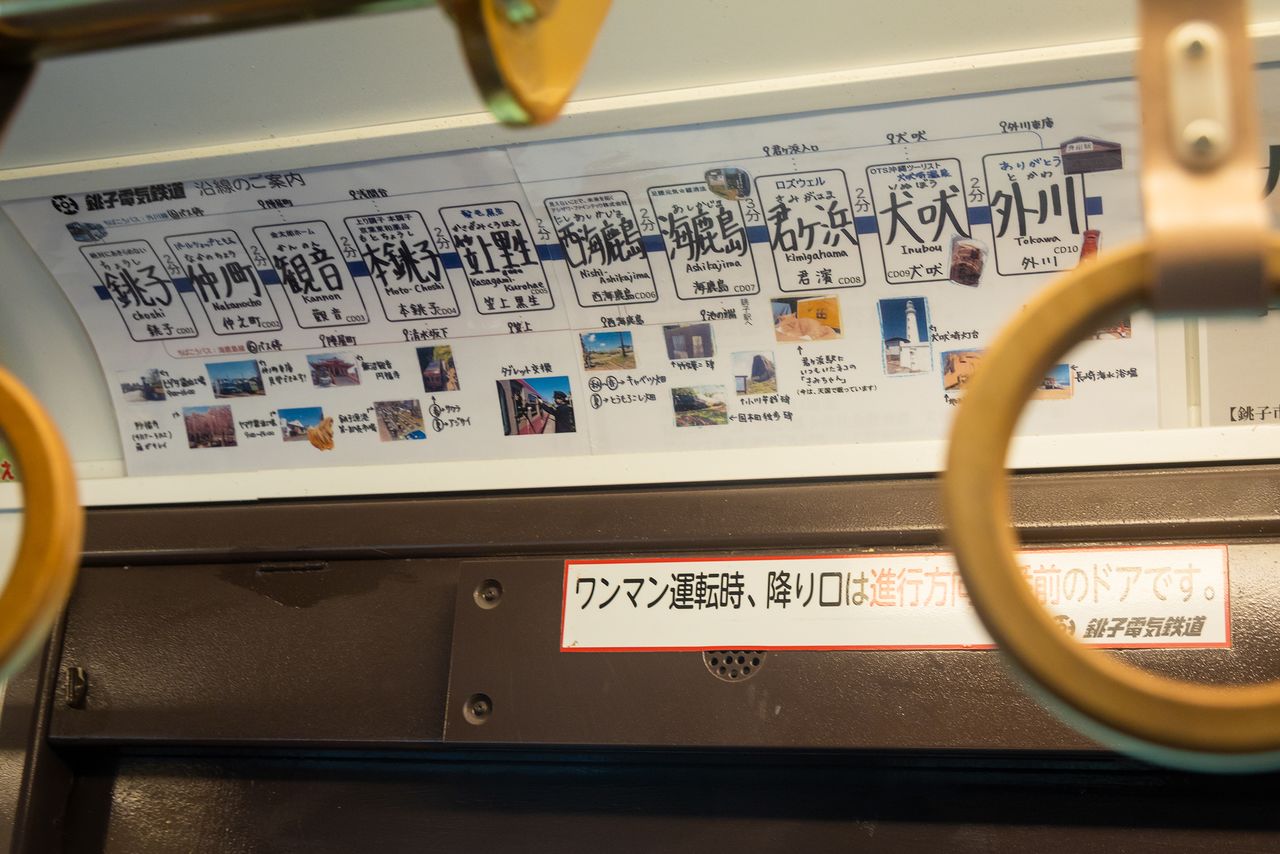 Hand-written station names give Chōden a down-home feeling. Each name is accompanied by a thumbnail sketch of a local attraction.

Rice cracker sales had saved the railway, but financial disaster struck in August 2006 when a former president was arrested for embezzling ¥100 million from the company. Short of operating capital, the rail line found itself unable to come up with ¥10 million needed to pay for the upcoming inspection of its rolling stock. And following a transportation ministry audit around the same time, Chōden was ordered to bring its aging level crossing and rail infrastructure up to code, which would cost an additional ¥50 million. Things were looking bleak when the accounting department head posted a desperate appeal on the railway’s official website asking people to help keep the line running by buying more nure senbei.

The message went viral and Chōden was flooded with over 10,000 orders for the snack in a span of just 10 days, bringing in enough revenue to pay for railcar inspection. The sustained media attention boosted sales of nure senbei in 2006 to ¥420 million, and ridership also jumped by nearly 50%. A Chōden supporters club was formed, and by the following year, enough money had been raised to complete upgrading the railway’s facilities. 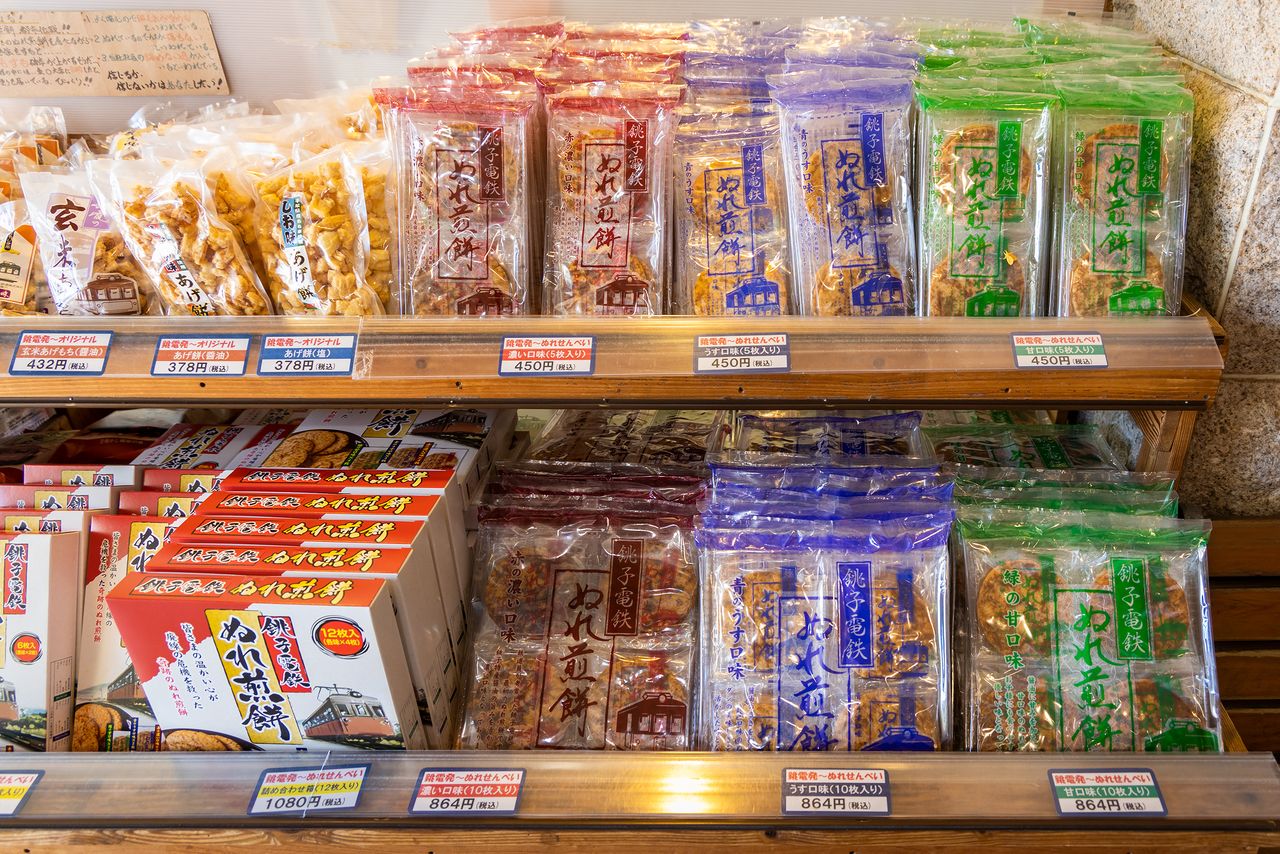 Nure senbei comes in a variety of flavors. At ¥864 for a pack of 10, the crackers are not cheap, but the product is addictive and attracts many repeat customers.

Since then, ridership on the line has returned to around half a million passengers a year, but the popularity of nure senbei has endured, with it becoming a well-established Chōshi souvenir. Online sales of the cracker are strong too. Planners went all out to give Chōden’s line of confectionery and food products zany, self-deprecating names, including poking fun at the company’s financial difficulties, all for the sake of supporting the rail line. Other imaginative money-raising ventures have included selling naming rights to the stations and using crowd funding to produce a horror comedy set on the railway.

The coronavirus pandemic has drastically reduced tourism to the area, further impacting rail operation revenue. Rail division head Oku Hideaki explains that while the railway derives 80% of its revenue from wholesaling confectionery, the focus remains on the train line. “Some say that we should double down on snacks, but our food products are popular precisely because they’re an offshoot of rail operations,” he exclaims. He points out at that many of company’s employees joined because they like railways. “I myself used to be a conductor, and I know we provide a vital transportation service. When nure senbei became a hit, we realized we had to swallow our pride and be ready to do anything to keep the line and Chōshi in the public eye. We’ll continue giving back to the local community for its support by doing what we can to attract more visitors.” 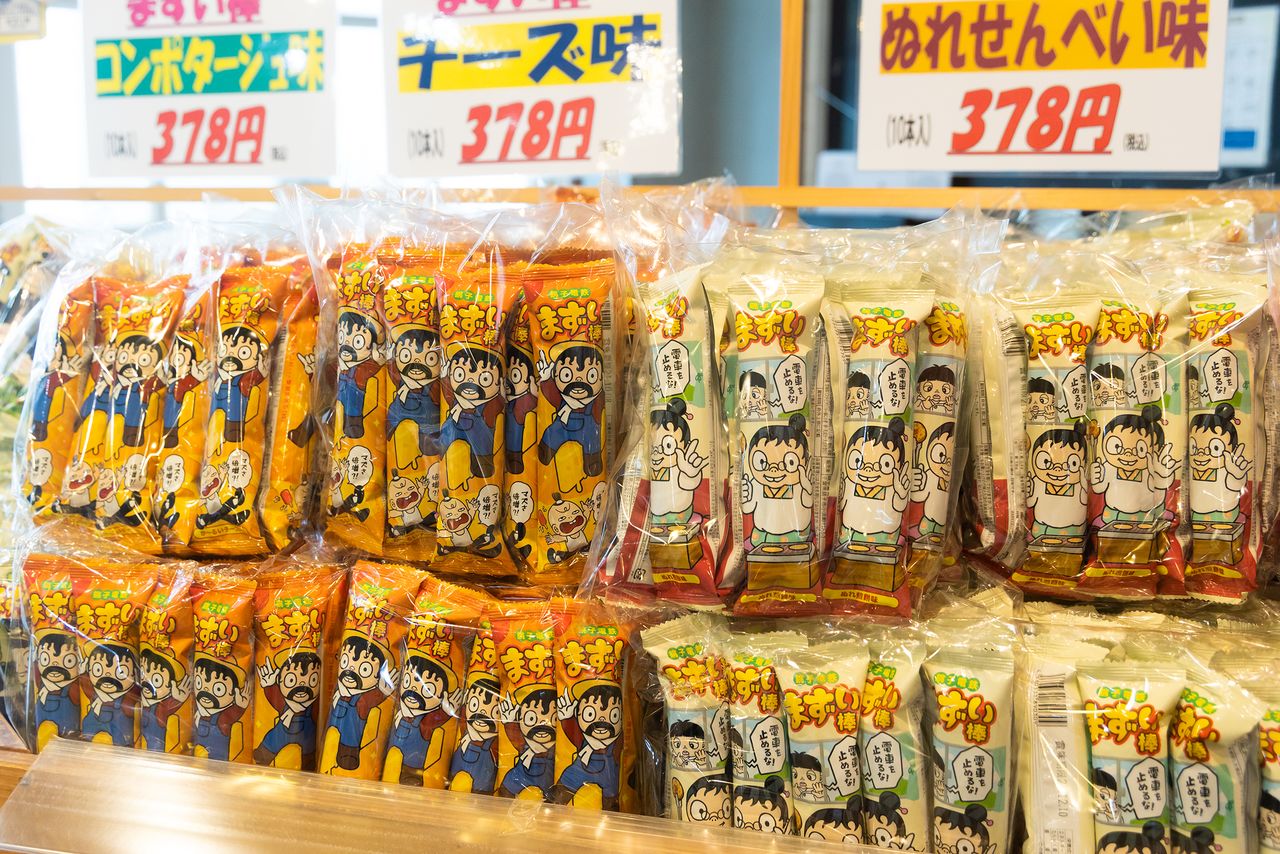 Chōden’s other popular product is Mazui-bō. In typical Chōden fashion, the name of the crunchy snack is a humorous take on a famous national brand of snack food. 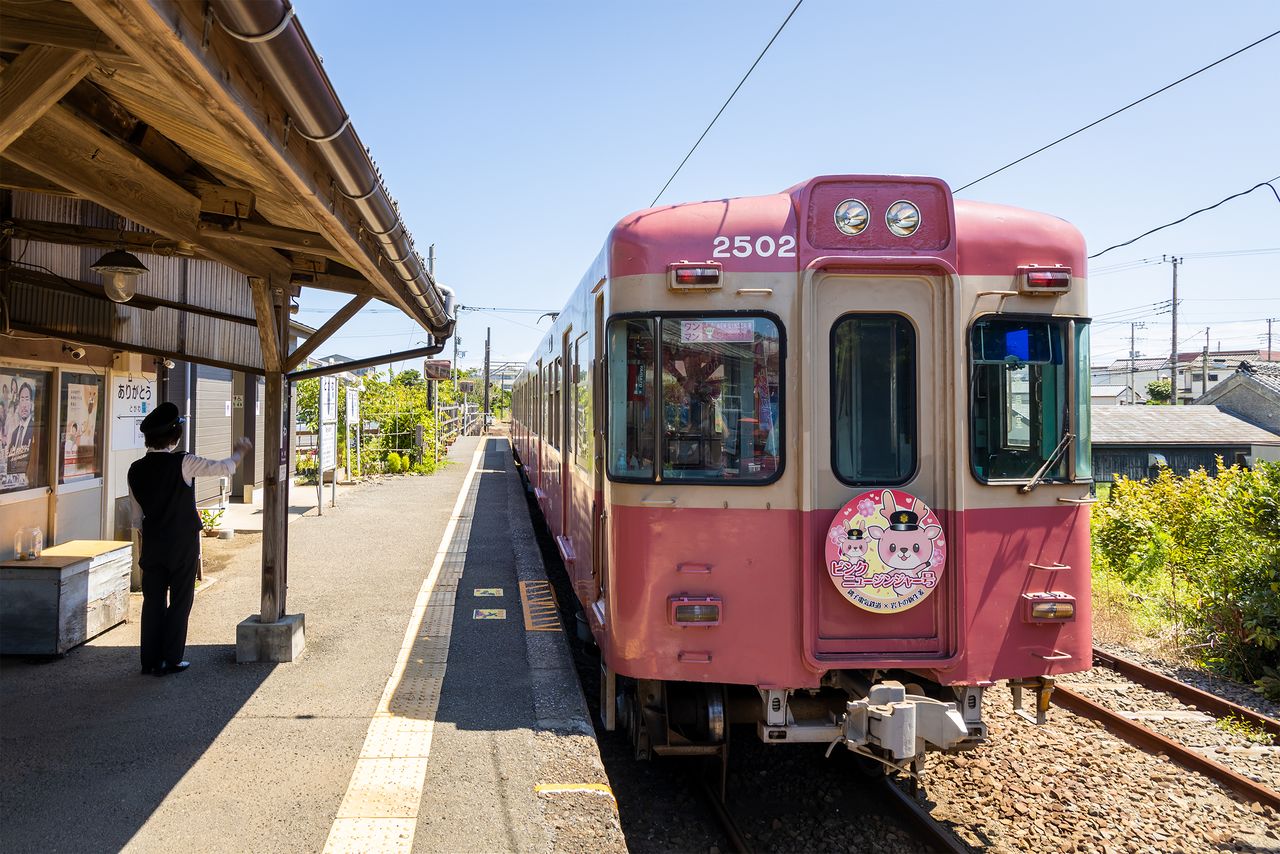 A station attendant sees the train off at Tokawa Station.

Chōden’s small, old-fashioned rolling stock and tiny station buildings are tourist attractions in their own right. Many visitors take advantage of the line’s one-day pass to take the grand tour, hopping off at every station to have a look around.

The two-car trains roll along through residential areas and fields of cabbages. Tree branches along the track sometimes brush against the windows, making the trains feel thoroughly part of the landscape. The stained-glass windows in the nearly century-old cars are tourists draws, with riders sharing photos of them on social media. 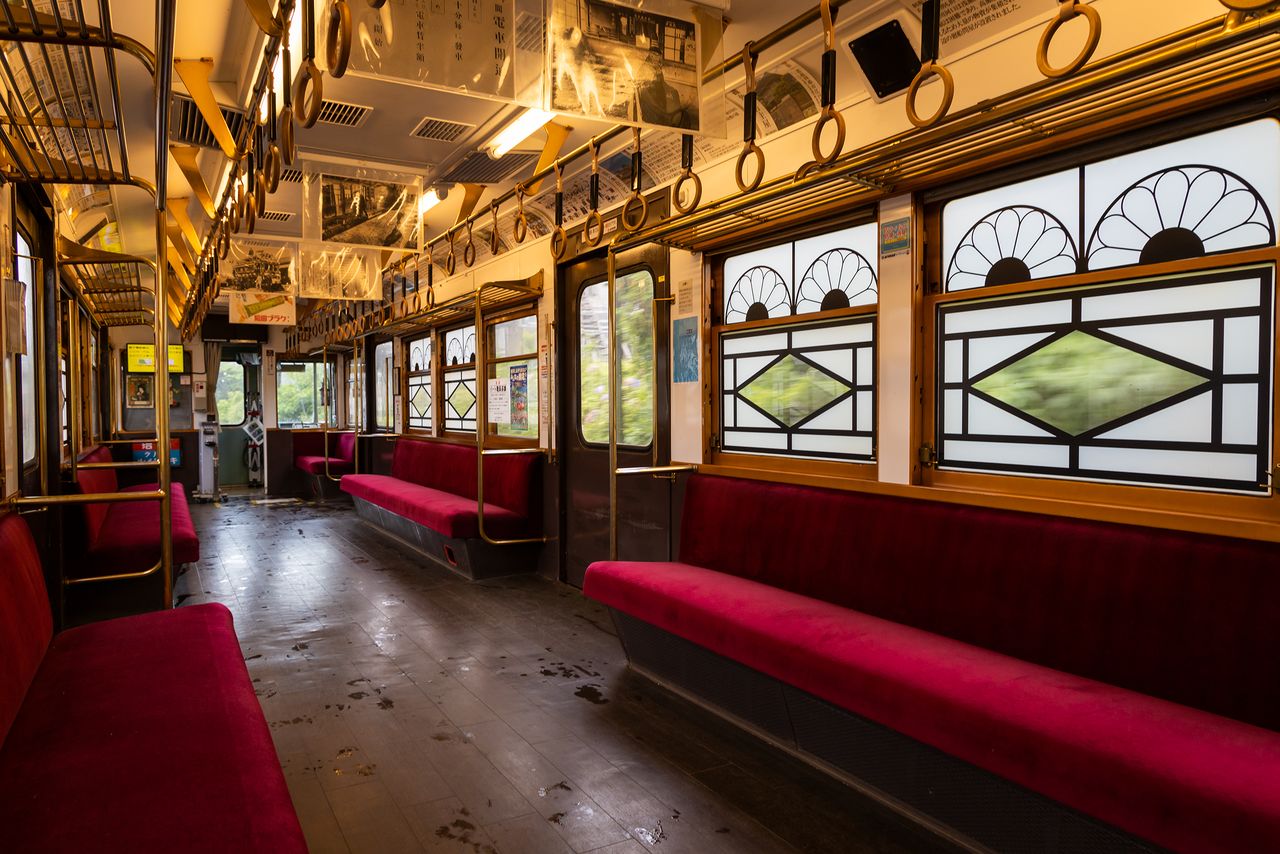 The windows convey a romantic atmosphere. 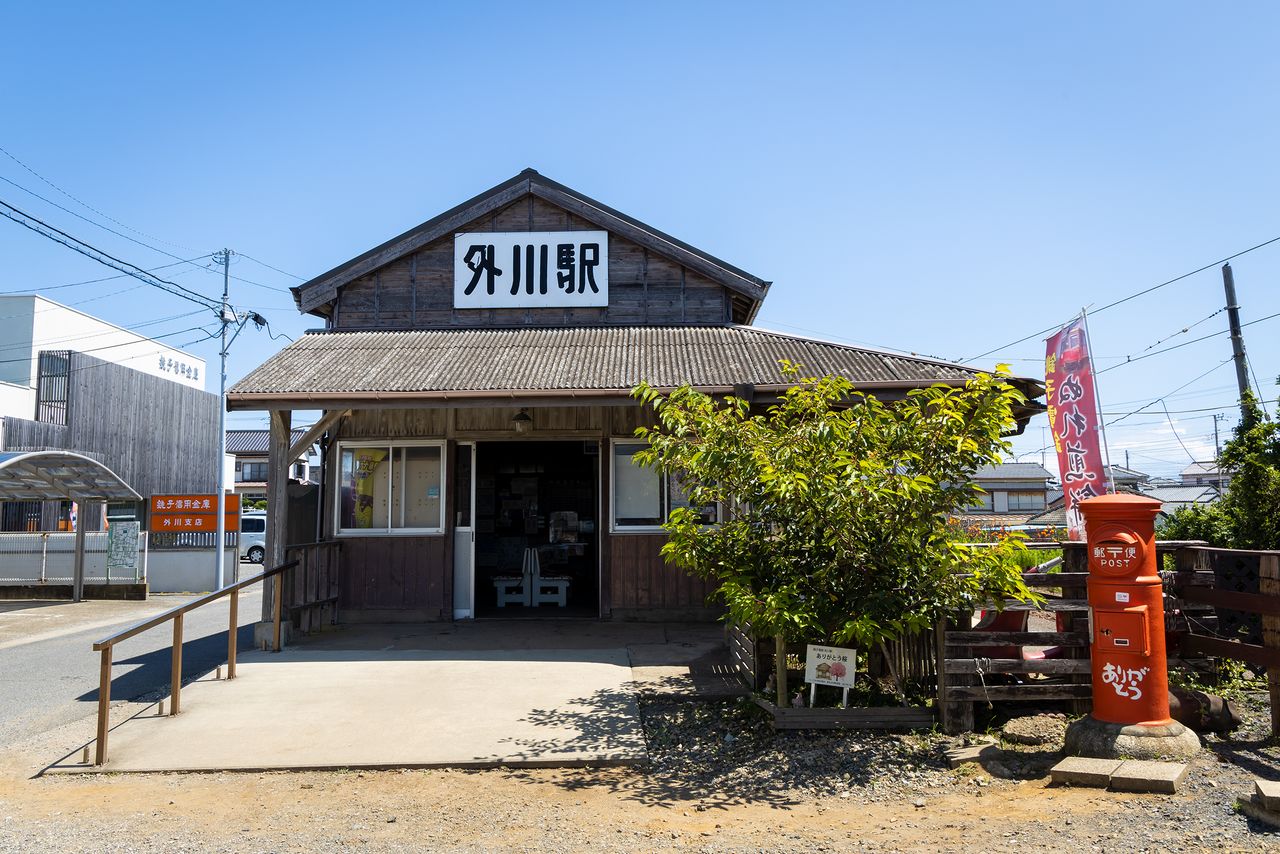 Tokawa Station’s weathered building has a flair all its own.

One of the railway’s main attractions is Nakanochō Station, site of Chōden headquarters. Across from the platform is the maintenance shed, where visitors can view unusual train parts and specialized tools as well as take a close-up look at a tiny German-made electric locomotive dating from 1922. 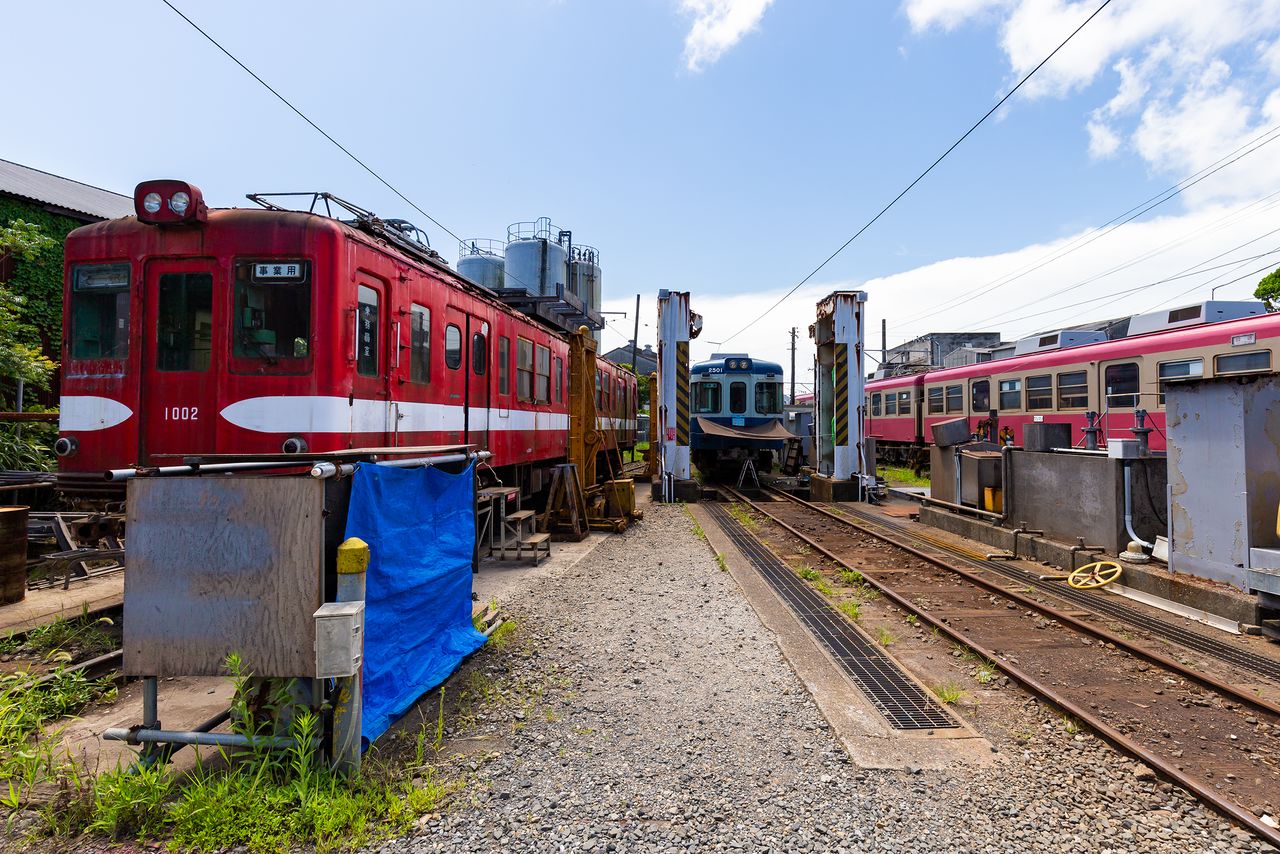 Every part of the railcars, right down to the wheels, is visible at the depot at Nakanochō Station. 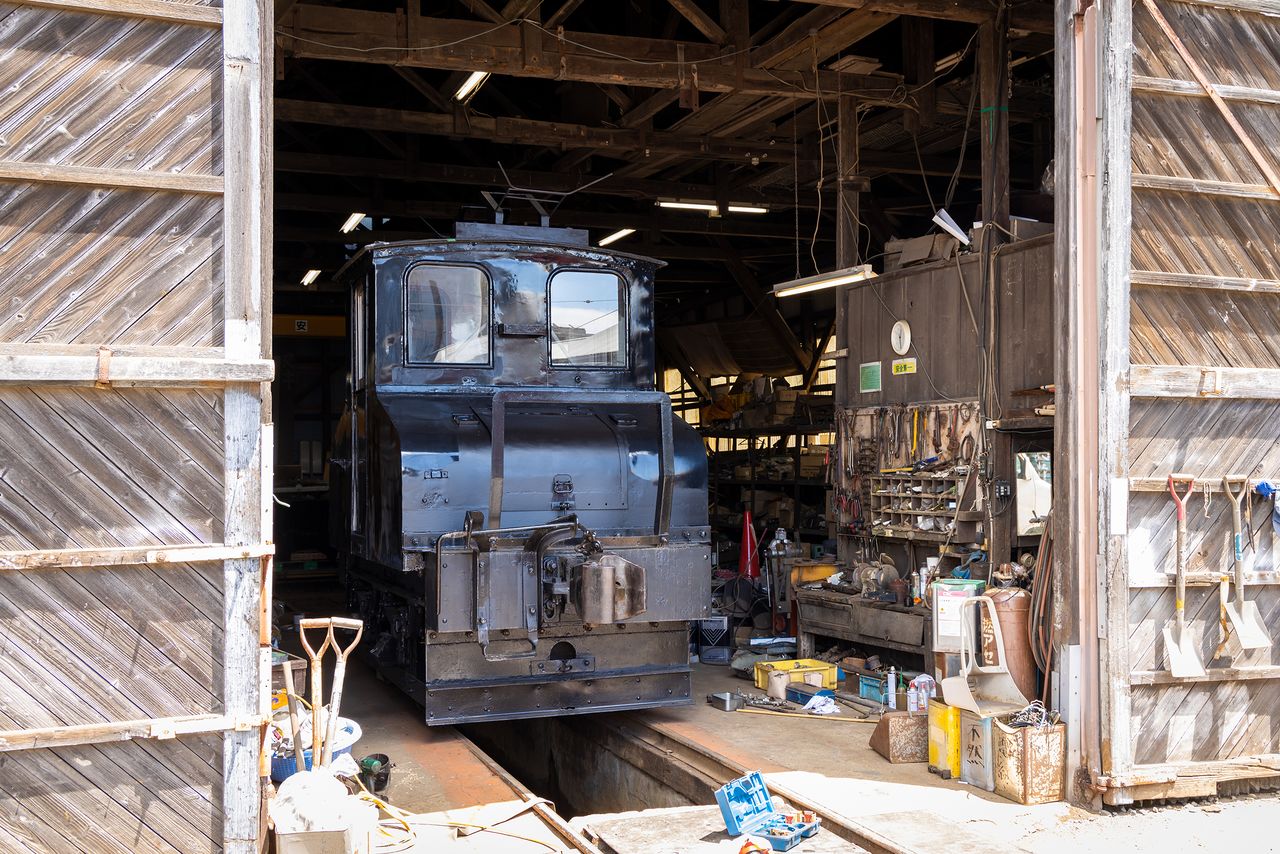 An electric locomotive in the maintenance shed. Vintage parts and tools are also on display.

The railway also features intriguing station names. Chōden began selling naming rights in 2015, and the line now officially runs from Zettai ni Akiramenai (never give up) Chōshi Station to the end of the line at Arigatō (thank you) Tokawa Station. Other stations carry the names of local businesses, such as pachinko parlor Pearl Shop Tomoe Nakanochō Station and realtor Kintarō Home Kannon Station. Kasagami-Kurohae Station has been dubbed Kaminoke Kurohae (grow black hair) Station. At first glance, these outlandish names may provoke a chuckle, but Oku insists that they convey the sponsor businesses’ earnest desire to keep Chōden in the limelight. 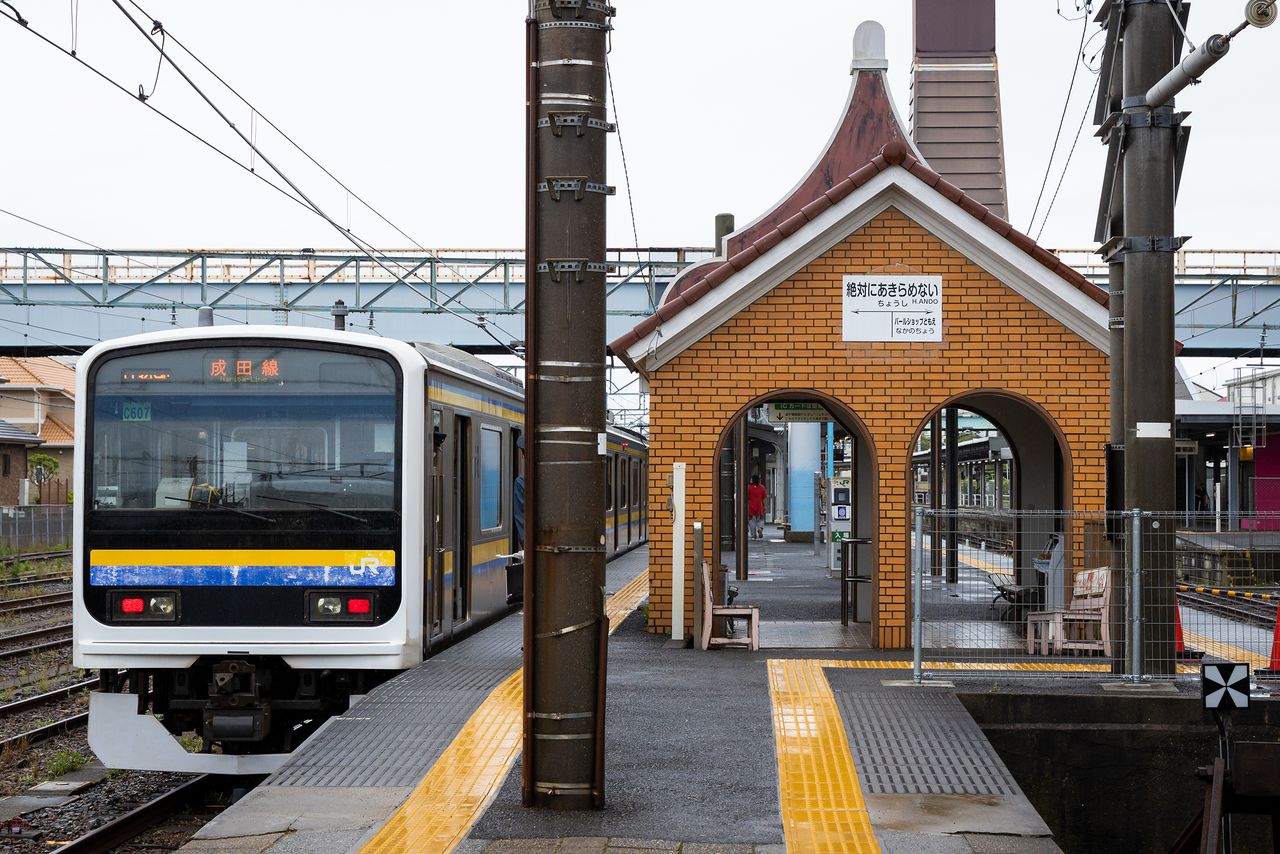 JR Sōbu Main Line trains connects to Chōden at Chōshi Station. Visitors unaware about the naming rights ploy may be surprised to learn that they have arrived at ”Never Give Up” Chōshi Station. 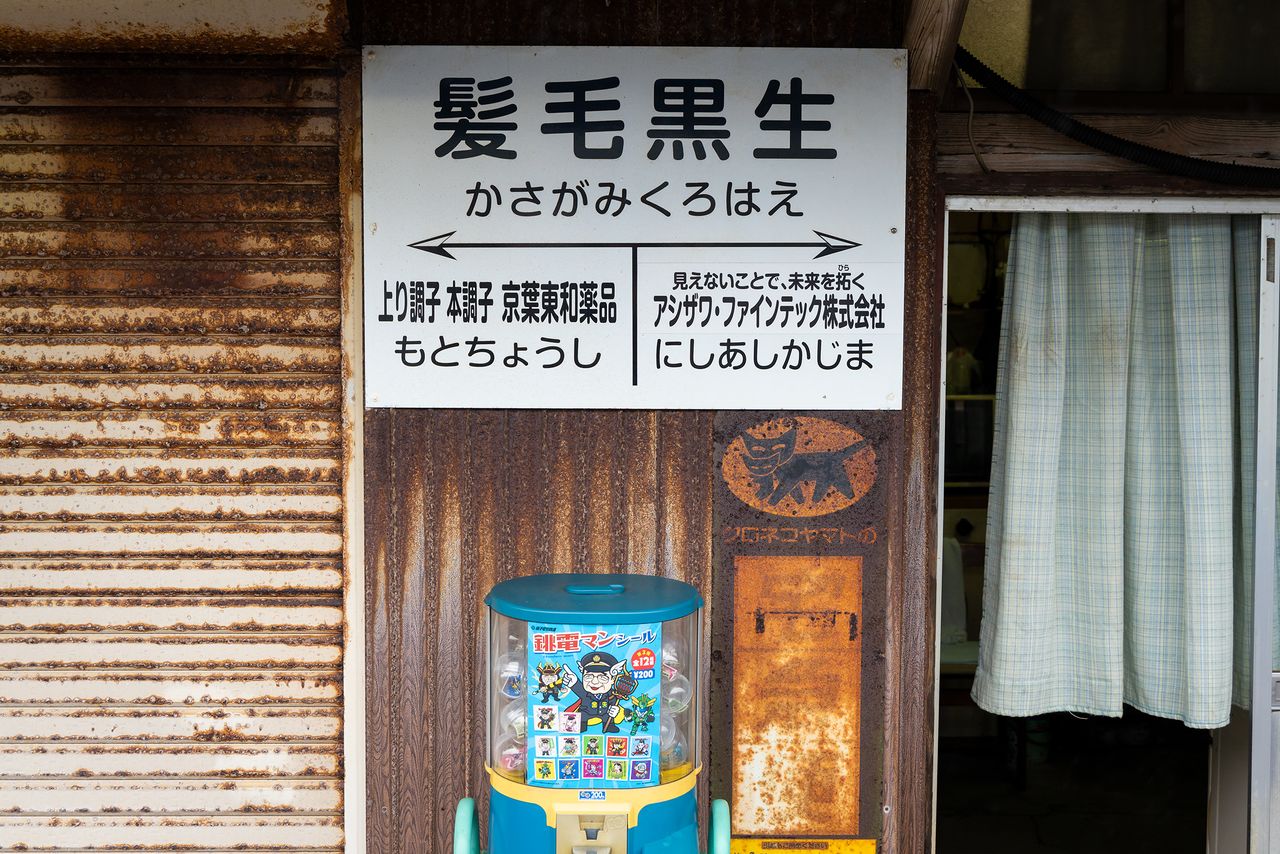 Station names are accompanied by humorous captions like at Kasagami-Kurohae, which displays felicitous phrases such as “on the up” and “going strong” for boosting the railway’s fortunes.

Chōshi and surrounding areas have a long history and many interesting spots to visit, including the iconic lighthouse at Cape Inubō. A short walk from Inubō Station, the 31-meter lighthouse was completed in 1874. Nearby is Inubō Seaside Terrace, built in 2018, which houses shops selling local souvenirs, a vegetable market, and restaurants. An observatory, the Chikyū no Maruku Mieru Oka Tenbōkan, is a 15-minute walk from the station. 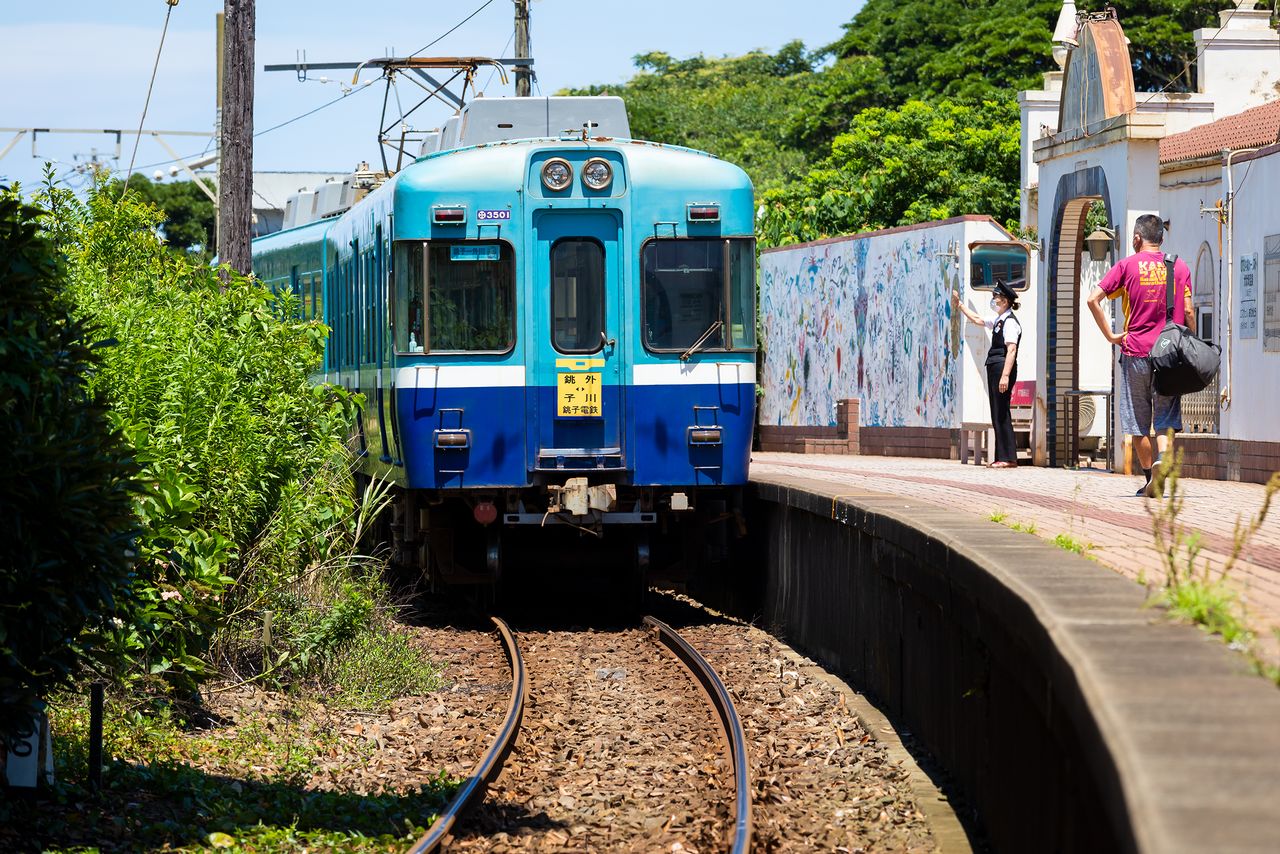 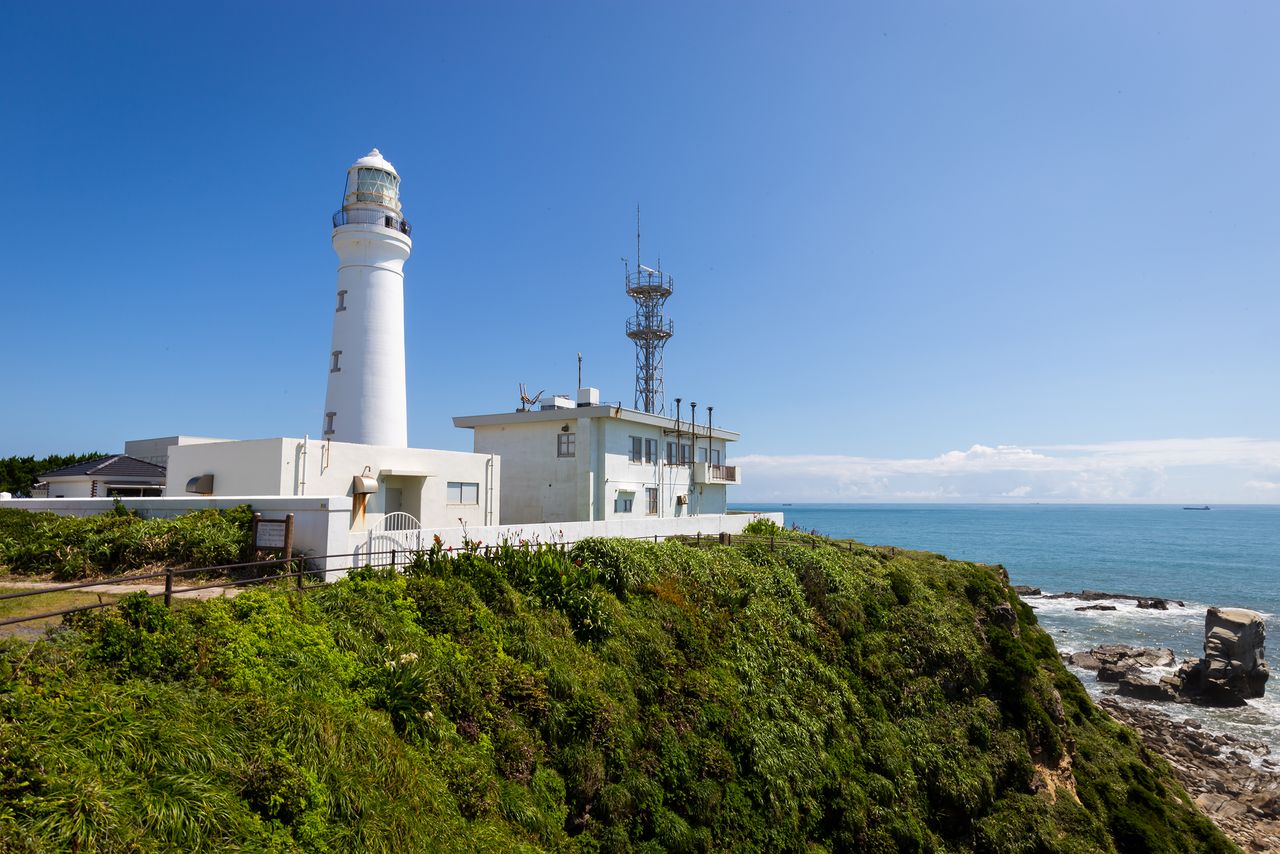 Visitors can climb to the top of the Cape Inubō lighthouse. 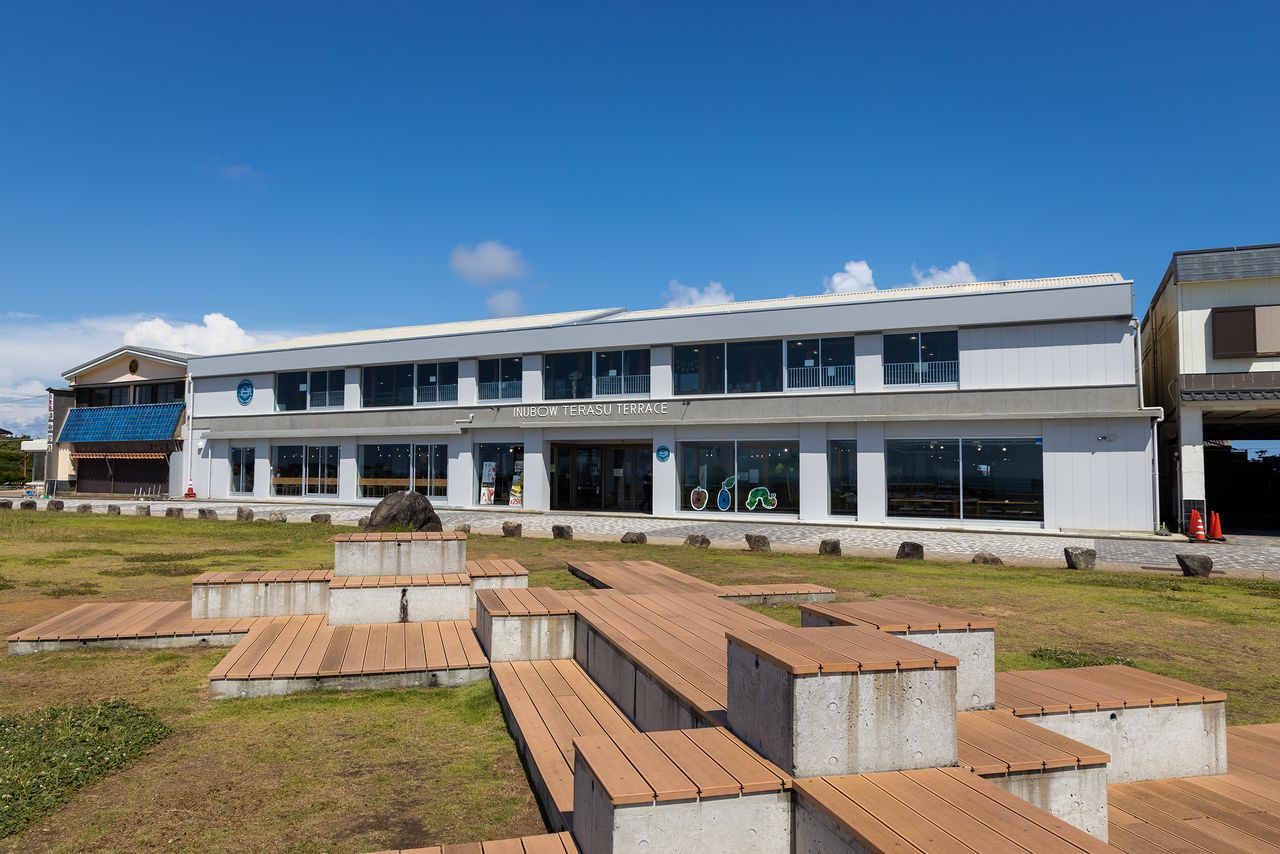 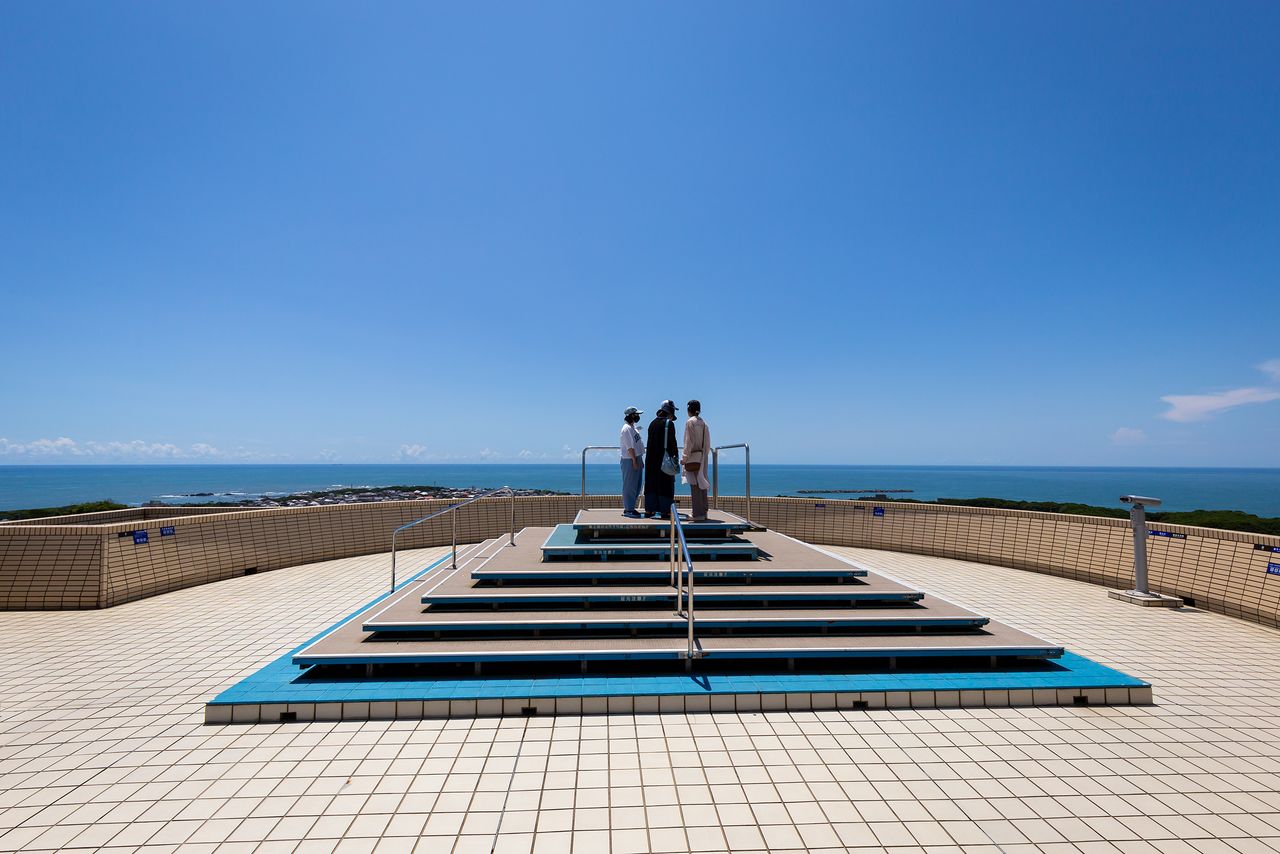 The rooftop terrace at the observatory offers a 360-degree panorama and a 320-degree view of the horizon.

Visitors who enjoy the distinct atmosphere of a fishing town should proceed to Tokawa Station, the last stop on the line. Tokawa was Chōshi’s first fishing port. Its time-worn buildings, together with the hilly cobblestoned main street of Isshin-dōri, make for great photos. Chōshi Port Tower and Wosse 21, a wholesale center for marine products, are also worth a visit, although reaching them takes 20 minutes or more by foot from Kasagami-Kurohae Station.

So far, Chōden’s side-businesses have kept the line running, and new products appear on a regular basis. This includes mobile phone ringtones—the clackety-clack of the train on the rails or the ding-dong warning bell at level crossings—which have been on offer since 2019. Regularly coming up with gimmicks is a taxing endeavor, and Oku admits that he has finally run out of ideas for promoting Chōden. Far from throwing in the PR towel, though, he is now looking to collaborate with other railway companies to attract passengers and boost demand for local rail lines throughout the country. 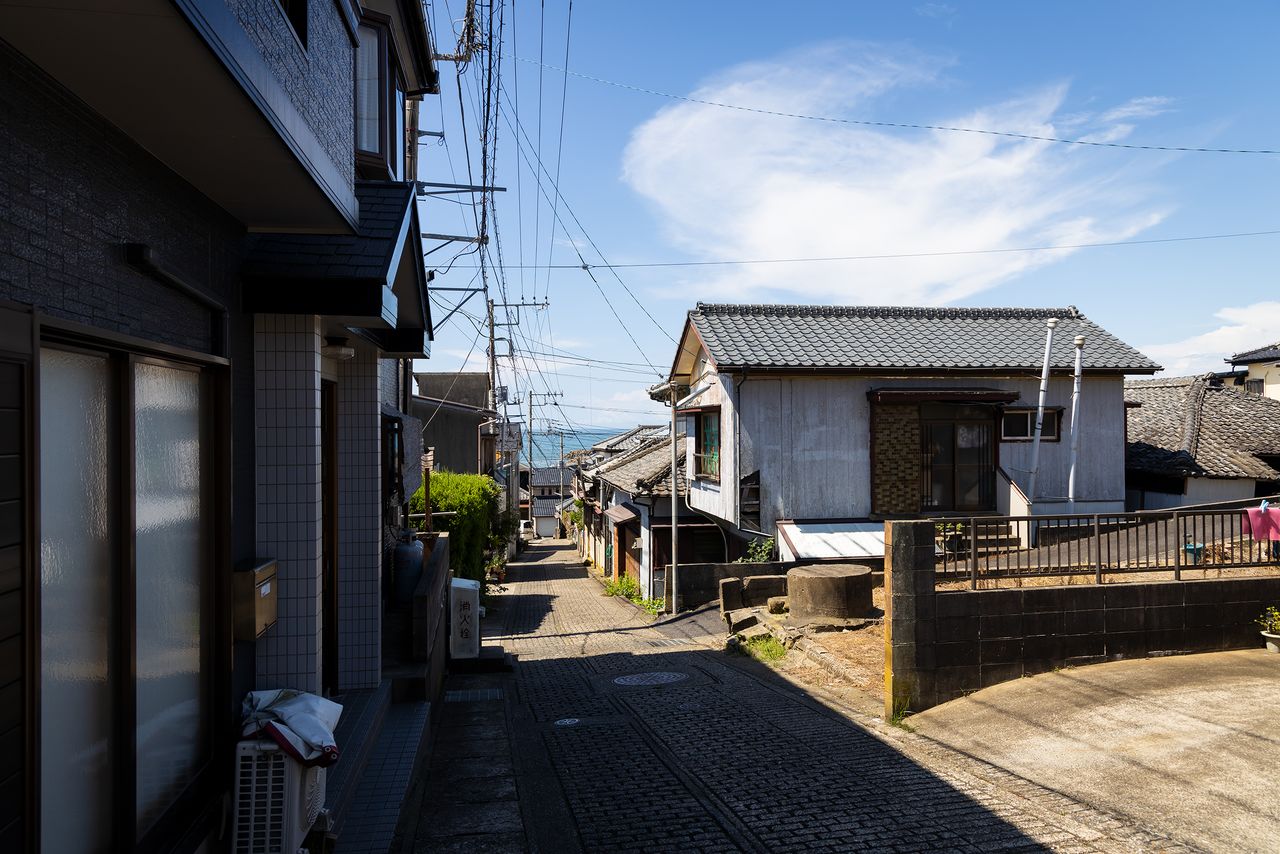 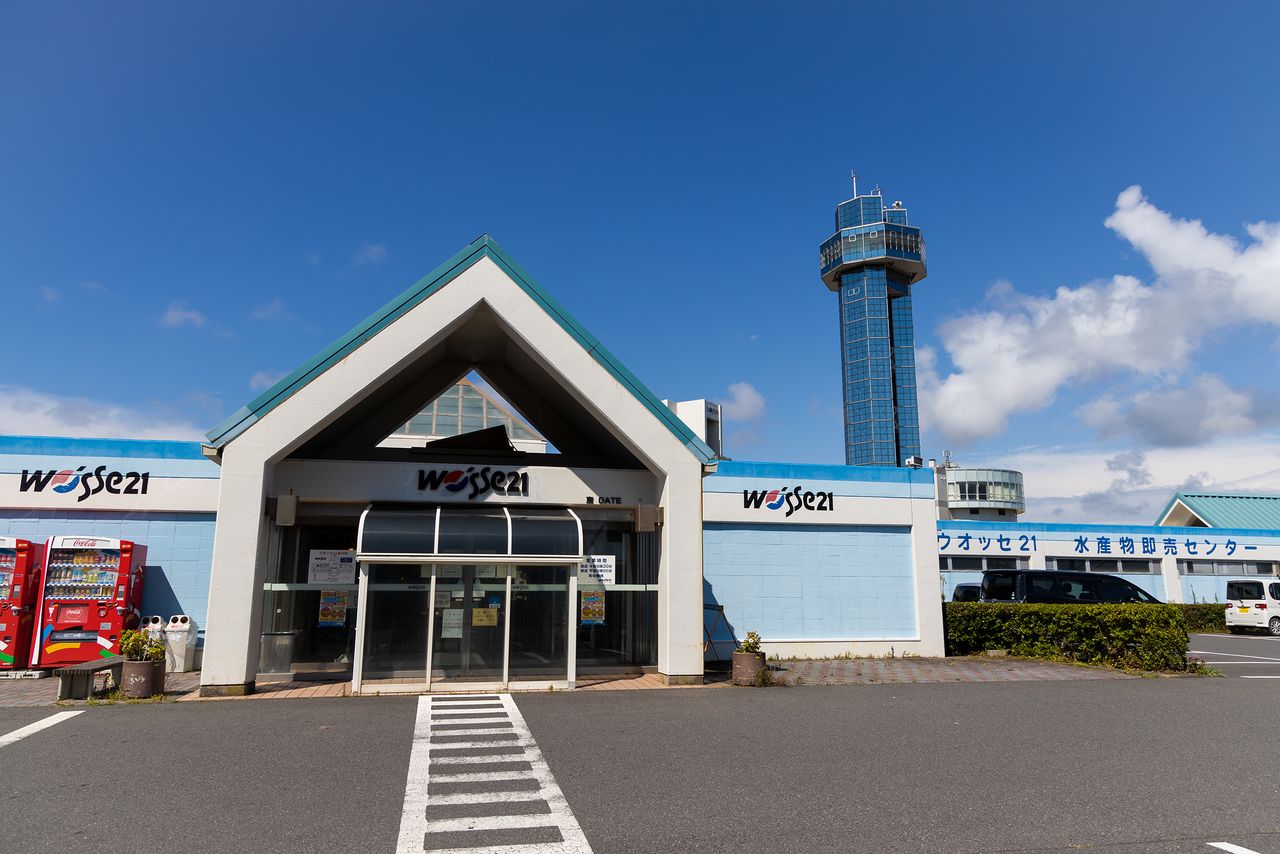 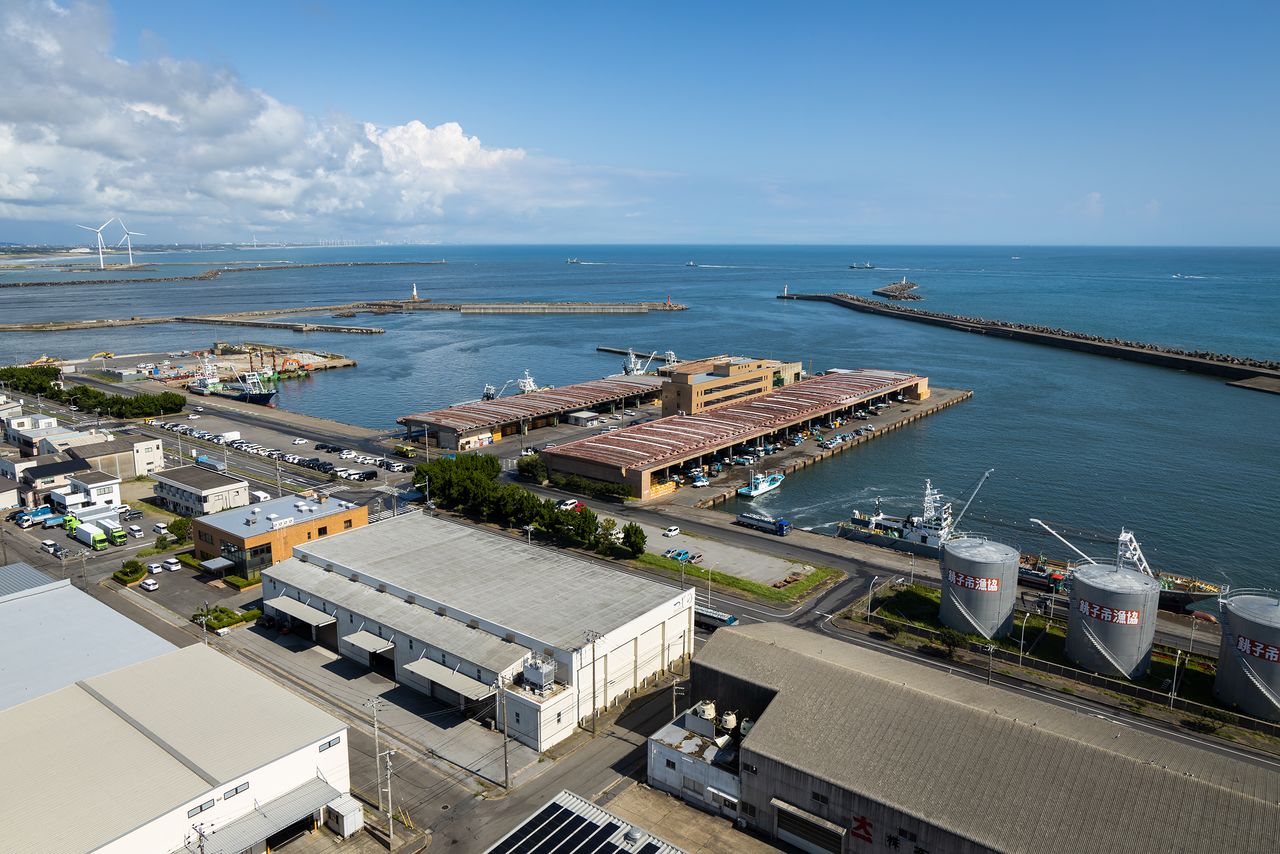 (Originally published in Japanese. Reporting, text, and photos by Nippon.com. Banner photo: Trains at Nakanochō Station, with the tanks of the Yamasa soy sauce plant visible in the background.)