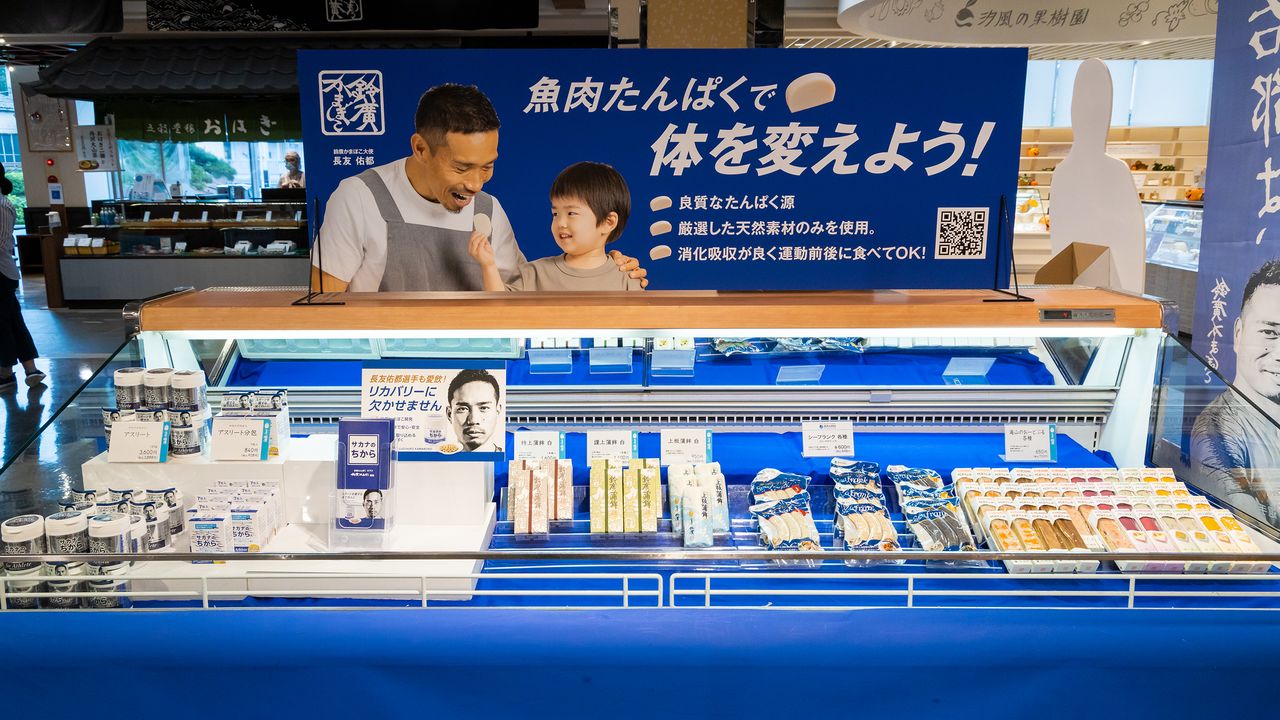 Nov 19, 2021
Nerimono products are made from minced fish and come in a variety of forms, including grilled patties and deep-fried fishcakes. The popularity of products has been on the decline in recent years, but nerimono has started attracting renewed attention among athletes and health-conscious consumers as people stayed home during the pandemic. Suzuhiro Kamaboko, a 150-year-old nerimono maker based in Odawara, Kanagawa Prefecture, has seen an opportunity to ride the food’s current wave of popularity.

The Suzuhiro Kamaboko no Sato tourist complex stands along the highway running through Odawara in Kanagawa Prefecture, the entry point for the hot spring resort area of Hakone. It is also on the route of the Hakone Ekiden, a university relay marathon that takes place yearly on January 2 and 3, and is usually thronged with visitors who drop in to dine, shop for souvenirs, or enjoy the hands-on experience of making kamaboko at the museum that is part of the complex.

An unusual sight greets shoppers in one section of the Suzunari Ichiba market hall: an eye-catching display featuring a life-size cutout of soccer star Nagatomo Yūto, a member of Japan’s national squad. There are also videos of Nagatomo in action, an autographed soccer ball, and a pair of his cleats. A sign proclaims the area as the headquarters of the “Fish Protein Federation.” The collaboration between Suzuhiro and Nagatomo began in December 2020 as a way to promote better health by encouraging consumers to eat more nerimono, a traditional fishcake that comes in a wide variety of assortments.

A Suzuhiro PR representative relates that the company has long promoted the benefits of fish protein, but with mixed results. However, as people stayed home during the pandemic, nerimono attracted attention as a tasty and readily available source of high-quality protein, and Suzuhiro saw pairing up with Nagatomo as a great opportunity to draw attention to its products. 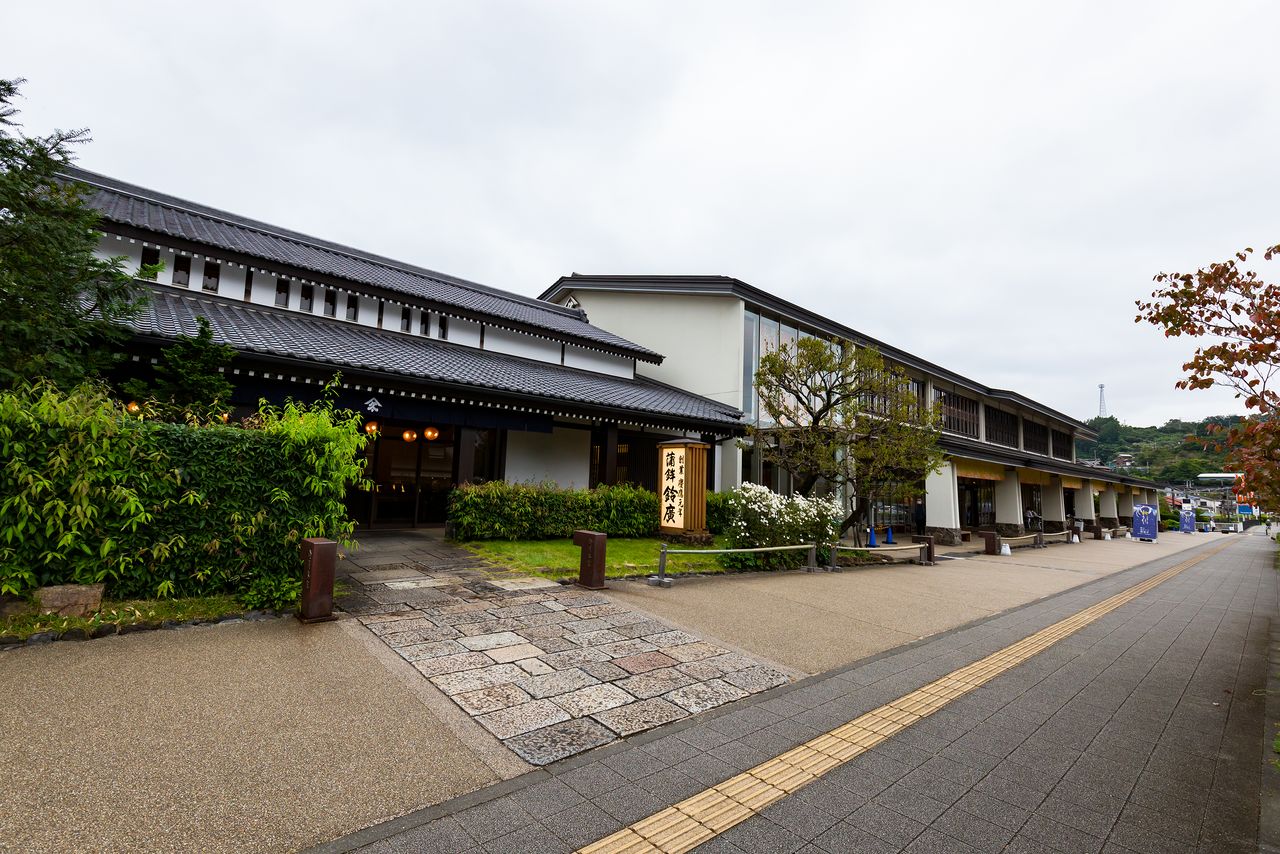 Kamaboko no Sato includes the headquarters of Suzuhiro Kamaboko, founded in 1865, and a complex that includes a museum, a restaurant, and the Suzunari Ichiba market hall. 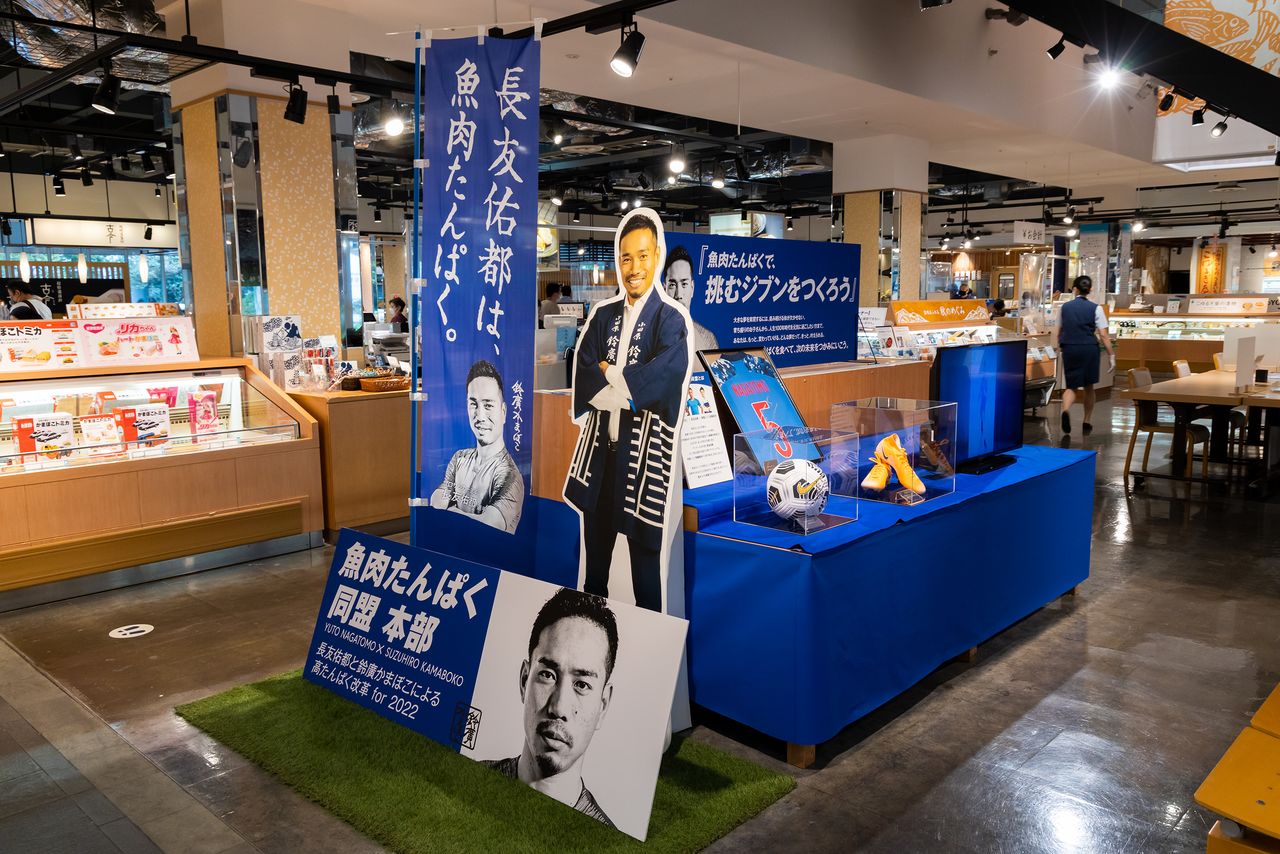 Nerimono products are endlessly versatile. Among offerings, kamaboko is part of auspicious New Year foods, known as osechi ryōri. Oden hot pots also feature fish paste patties and balls. Appropriately flavored and shaped, fish paste can be steamed to make kamaboko or shinjo dumplings, grilled to create leaf-shaped sasa-kamaboko cakes, boiled to make fluffy, white hanpen or swirling naruto, or deep-fried to produce satsuma-age. Kamaboko, perhaps the most venerable of these, boasts a centuries-old history, having been first mentioned in documents dating from 1115. 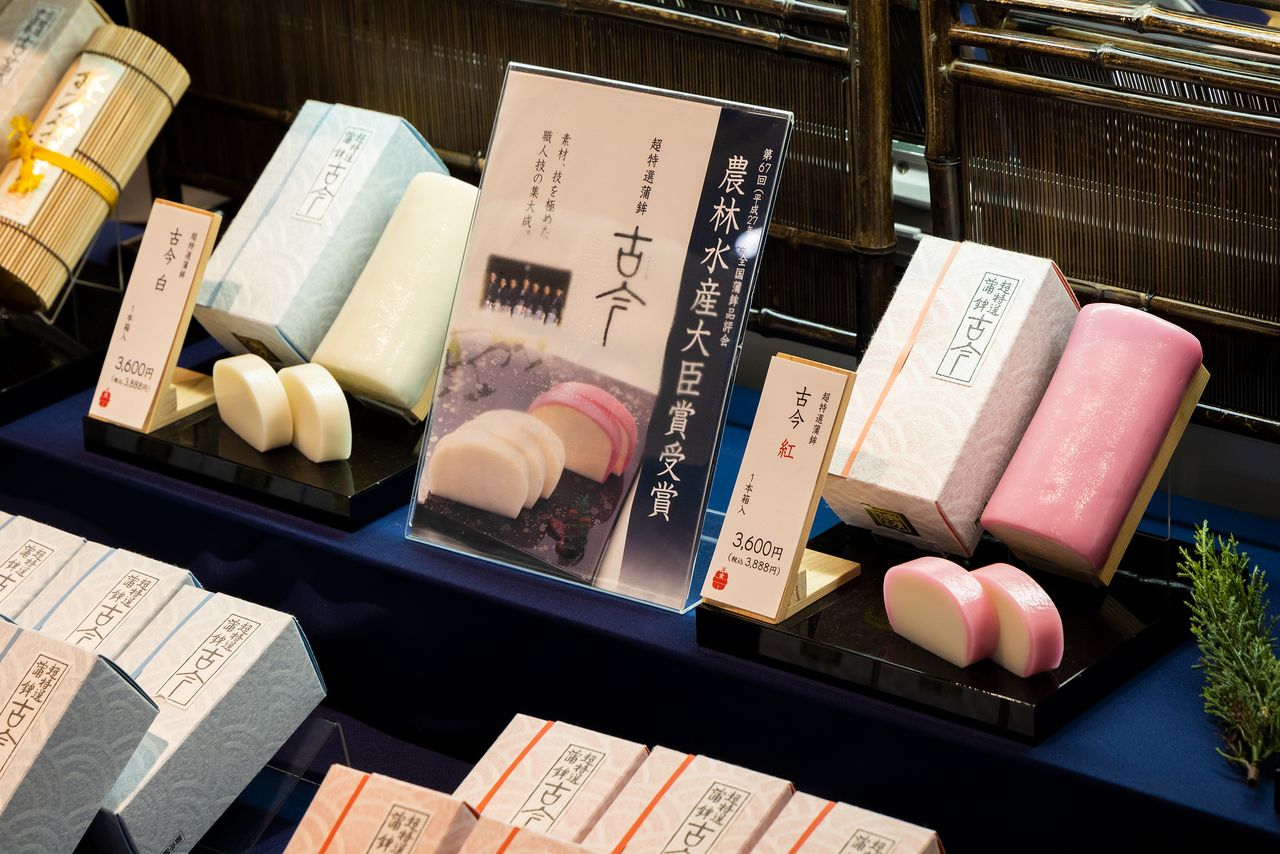 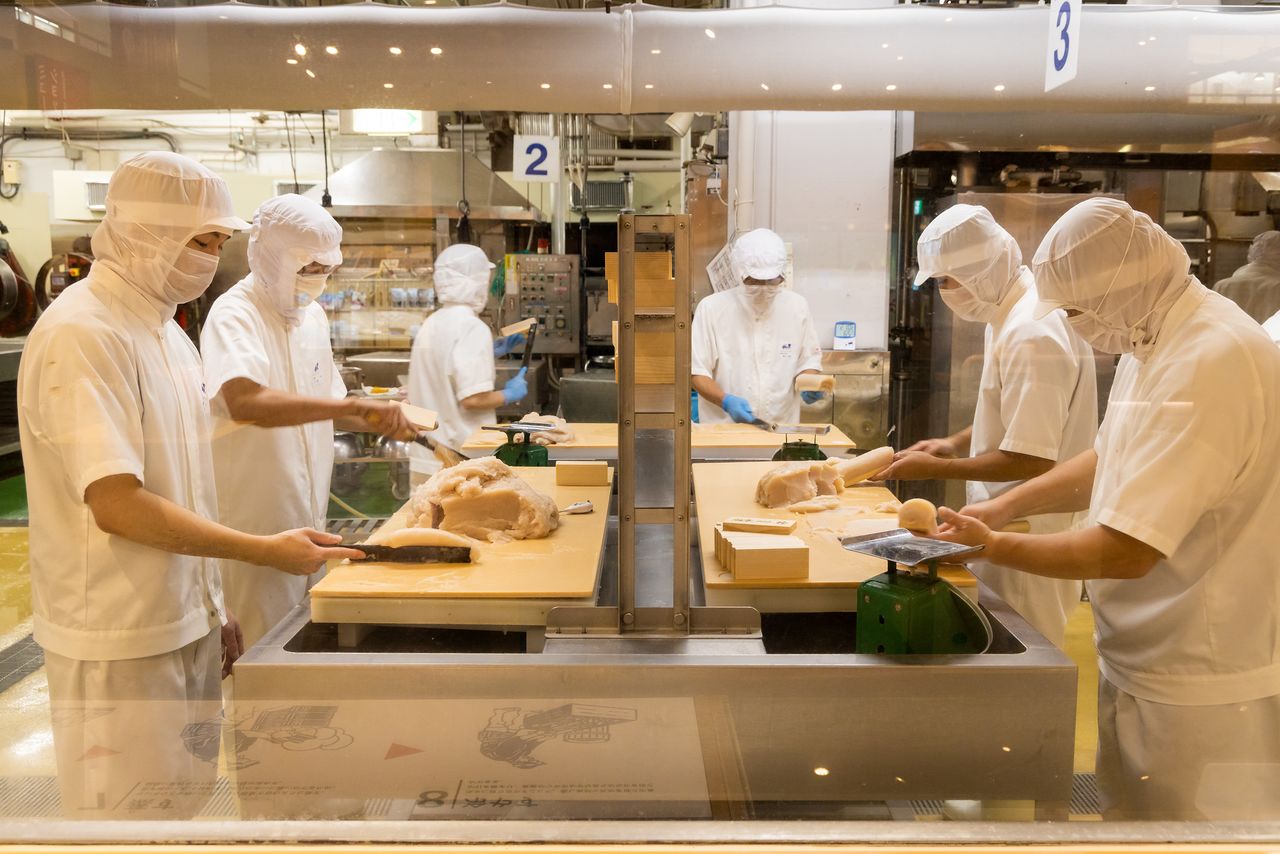 Workers display their skills at the Kamaboko Museum.

Up until the 1970s, nerimono were regularly eaten as a convenient side-dish for rounding out daily meals, but lost popularity with the increasing westernization of the Japanese diet. In the peak year of 1975, production reached 1,155,000 tons. Sales picked up again in the 1980s when kanikama, a type of imitation crabmeat, became popular, but by 2020, production had fallen to 473,000 tons, 40% lower than peak production volume. Membership in the Japan Kamaboko Association industry group, which topped 1,000 businesses at one time, has fallen to 600 firms today.

Business is starting to rebound, though. Consumers have woken up to the fact that products made from fish paste are low in fat and rich in protein, boosting the popularity of nerimono. Some manufacturers even say that demand is so strong that they are struggling to keep up. According to the Kamaboko Association, fish protein contains a balanced combination of nine essential amino acids that the body cannot produce on its own. It also helps maintain muscle, so it is beneficial for health and fitness. Easily digested and absorbed and low in fat, fish protein makes an ideal side-dish for a meal or light midnight snack. 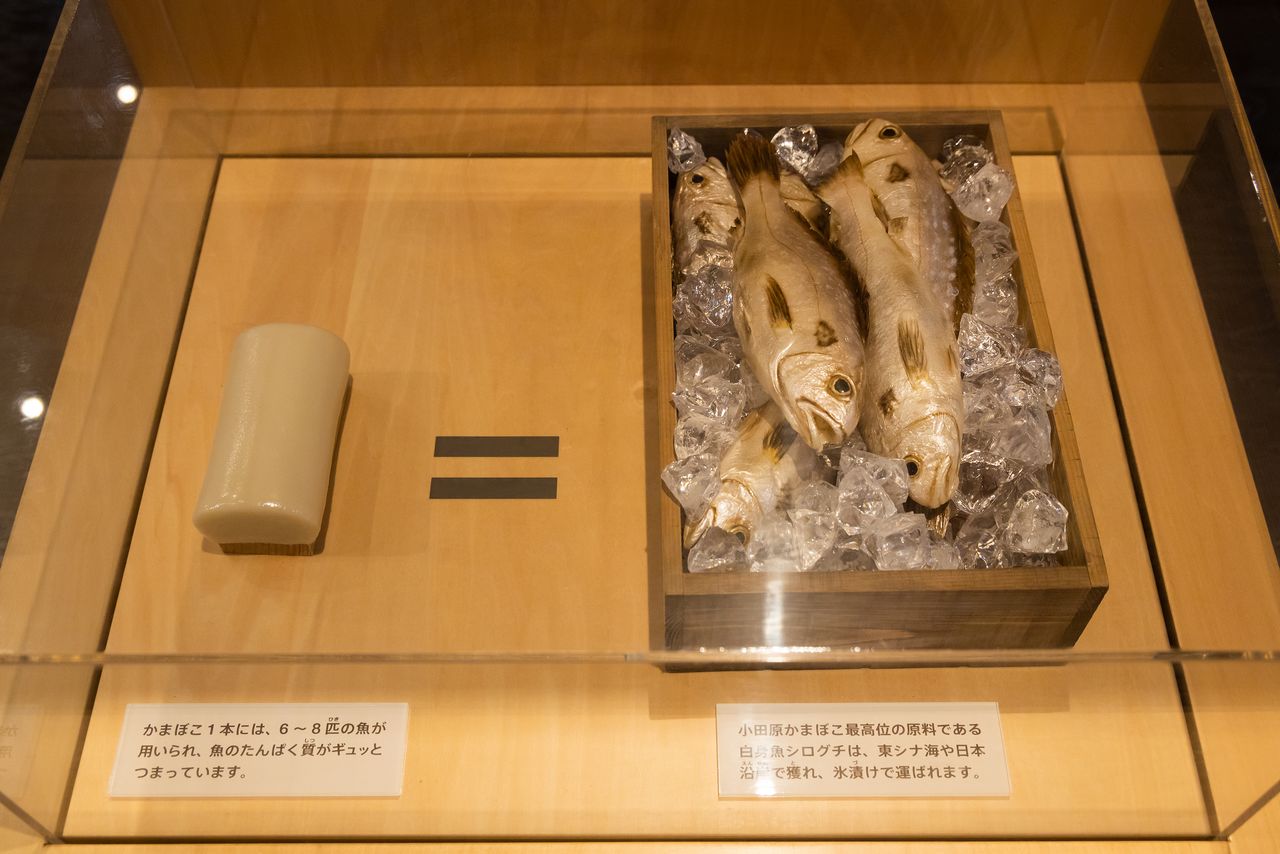 A display informs visitors that one block of Kokon kamaboko contains nutrients equivalent to those found in seven fish.

The Kamaboko Association says the pandemic changed consumers’ habits. People stayed home, cooked more, and become more health-conscious, leading to renewed interest in nerimono. Eager not to lose this opportunity to expand sales, the association created a logo especially to identify nerimono containing above a specified amount of fish protein. It has been distributing the mark to processors since November 2020.

Among other promotional activities, the group sponsored a yoga-based exercise and diet program on YouTube featuring a popular female entertainer. The Tokyo Olympics, held this year after a one-year delay, also stimulated interest in health and fitness, and the video targets individuals who want to improve fitness or maintain muscle tone, encouraging them to exercise and incorporate fish protein into their diet. 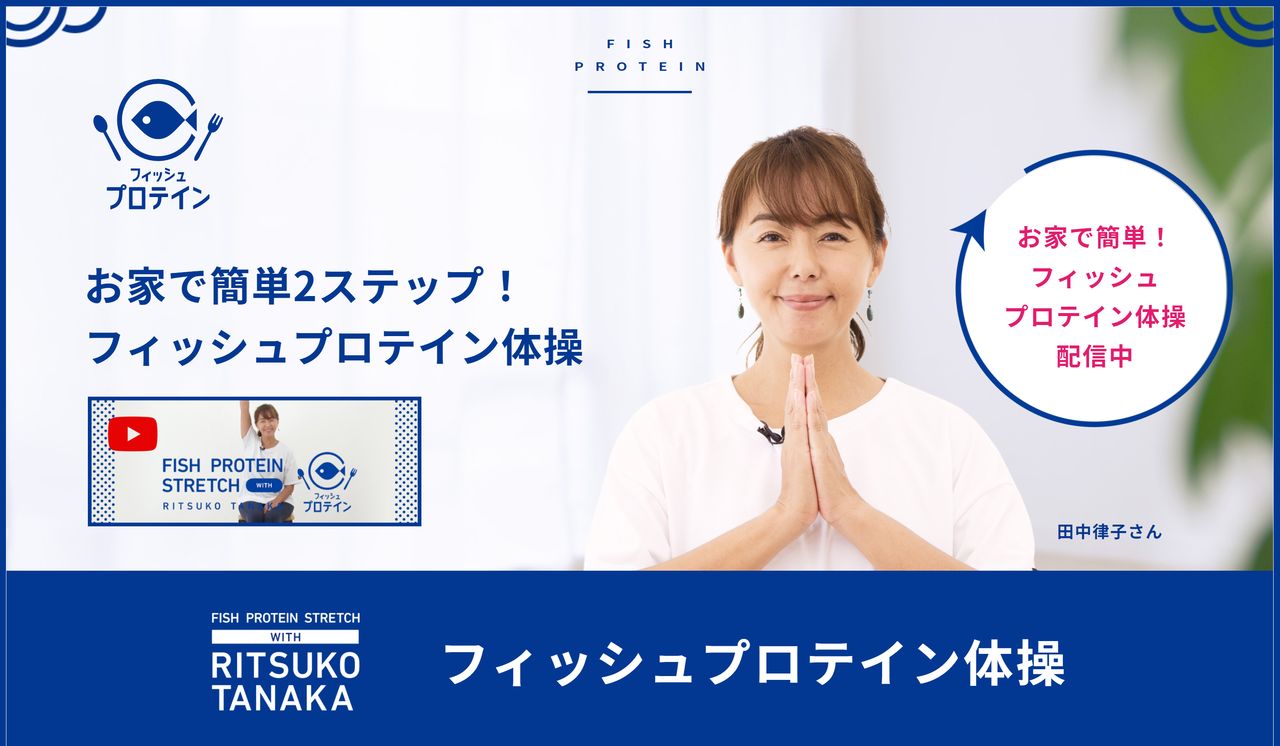 The renewed interest in fish protein has also included a number of leading Japanese sports figures.

Nagatomo, who frequently found himself sidelined by muscle injuries, hired a chef to cook for him and improve his physical condition. He developed a high-fat, high-protein diet, controlled for optimum carbohydrate intake, the principles of which he described in a best-selling book. One of the key components of Nagatomo’s diet program is fish, and since last year he has added kamaboko to his diet repertoire. He maintains that Suzuhiro’s products, made using natural ingredients and free of chemical seasonings and preservatives, are an essential source of energy for him after a training session. 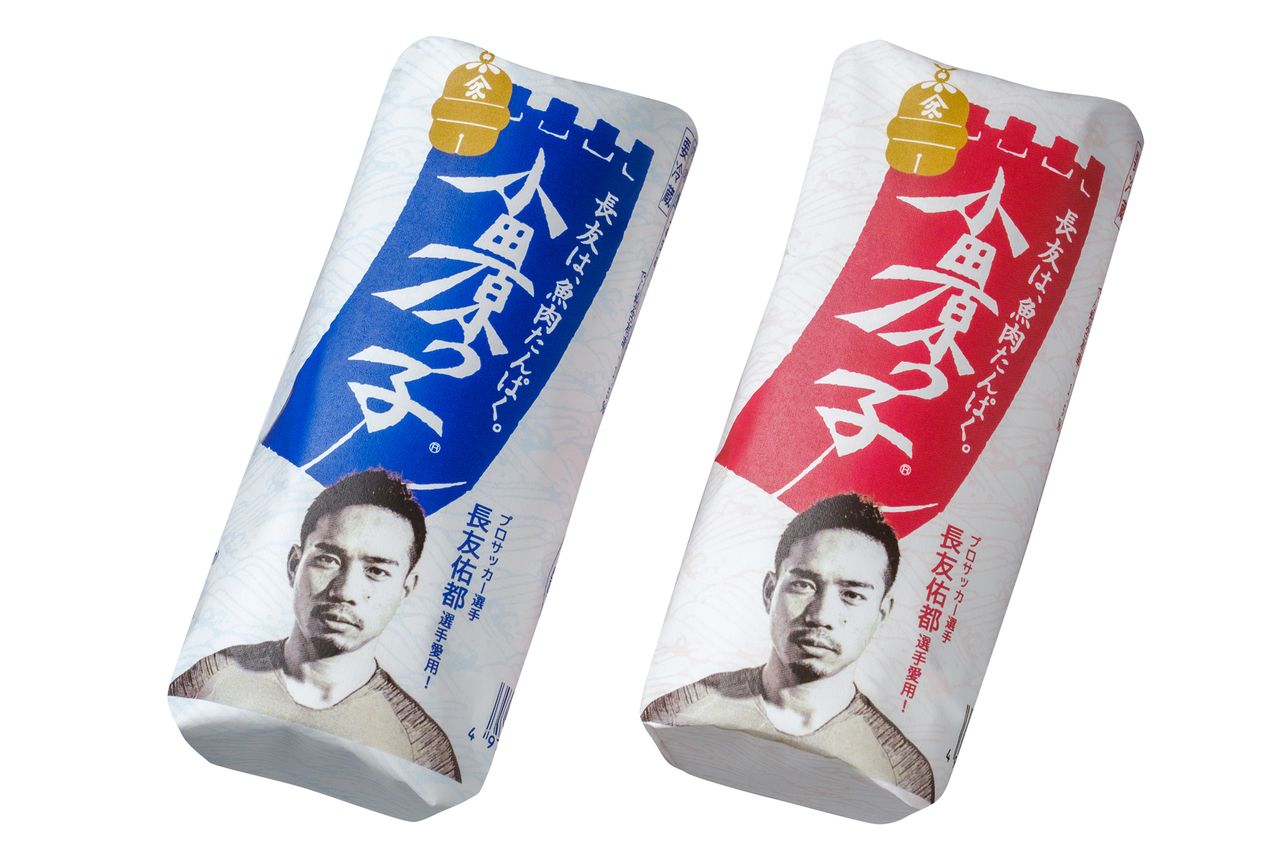 The collaboration between Suzuhiro and Nagatomo centers around the so-called Fish Protein Federation. In the summer, the project launched a crowdfunding campaign to develop the Chō Kamaboko. The product comes in three flavors: Galician-style octopus, splendid alfonsino acqua pazza style, and spinach and scallop gratin. The recipes for the products, featuring colorful strata reminiscent of layer cake, were developed by Katō Tatsuya, Nagatomo’s personal chef.

Each Chō Kamaboko protein bar contains more than 15 grams of protein. Initially, the product were sold exclusively to crowdfunding donors, but the project collected ¥8.3 million, far above the ¥1 million initial target, and there are now plans to make the brand more widely available. Suzuhiro’s PR representative feels that the company has a viable product on its hands. “We’ve heard from people who didn’t eat nerimono that much say that they want to continue consuming our products, which are also popular for use as gifts to the health-conscious, so sales are growing.” 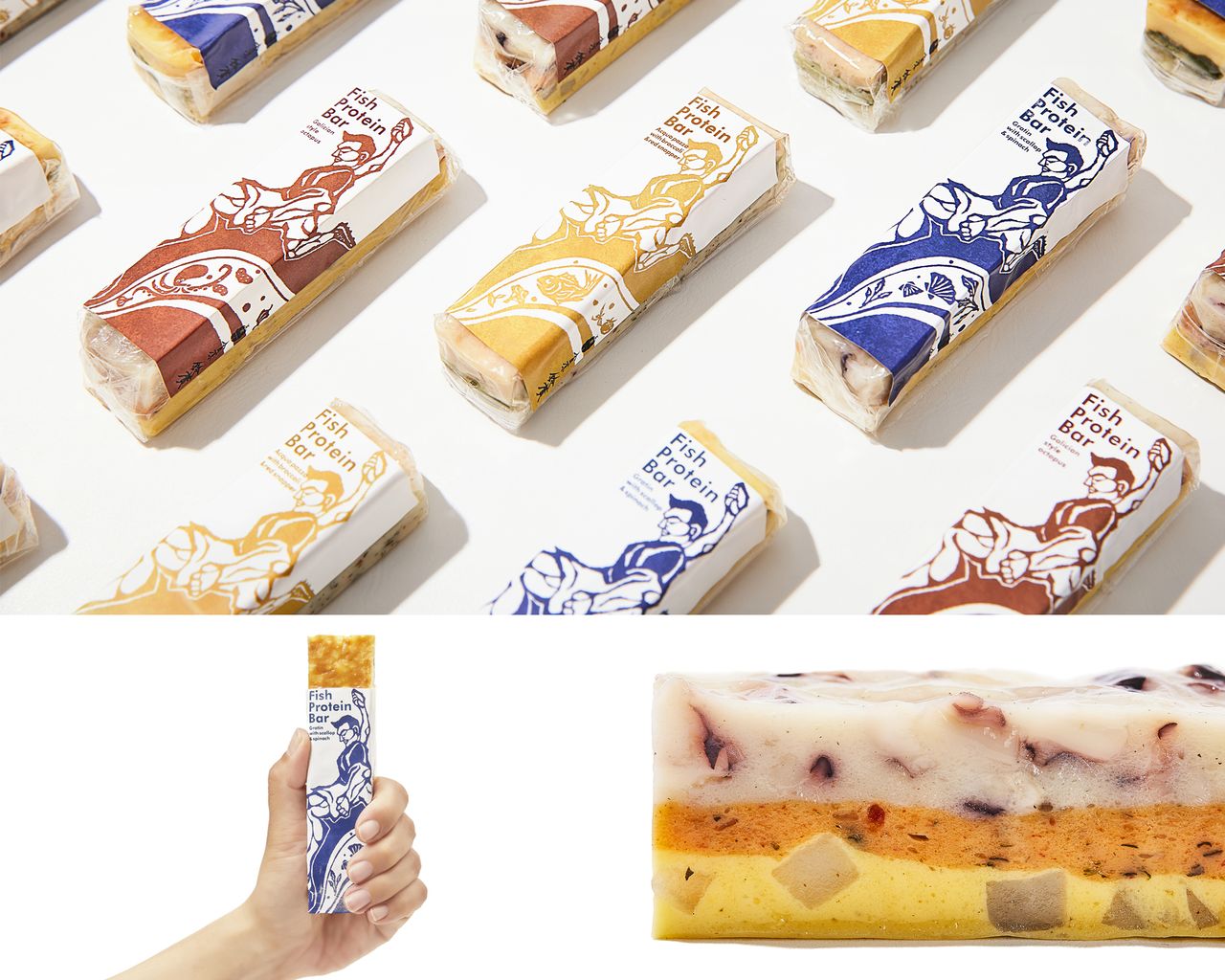 The Chō Kamaboko protein bars are Instagram-worthy too. (© Suzuhiro Kamaboko)

Not Just a Passing Fad

Suzuhiro also plans to direct its sales pitch about the virtues of fish protein to seniors, who are more familiar with nerimono. Incorporating wholesome fish protein into the diet of seniors, who tend to experience loss of muscle mass, is important for preventing falls and other mishaps. Another healthy appeal is that nerimono are easy to digest. They are also springy, and the chewing action required stimulates the brain and can help rev up the nervous system.

Suzuhiro also markets fish powder for creating nerimono at home by simply adding water. The product has proved to be a hit with customers, who enjoy molding the fishpaste into original shapes, and supermarkets have also shown interest in using it as an ingredient in prepared foods. “Sales aimed at the tourist trade plummeted when the pandemic shut down tourism, but the silver lining is that consumers are showing new interest in fish protein. We’re working hard to create products that go beyond our current repertoire, because we don’t want this trend to be just a flash in the pan,” explains a company representative. 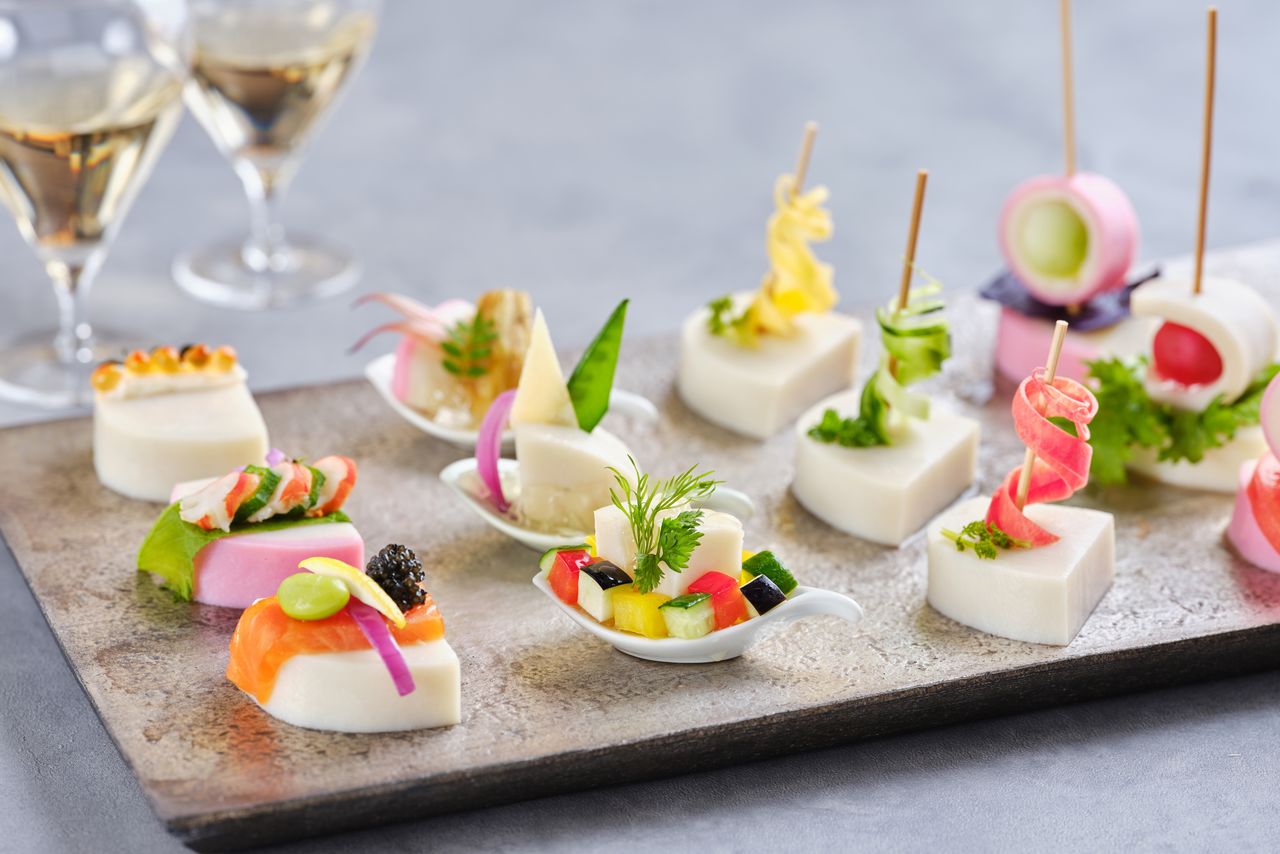 New varieties of products focusing on the benefits of fish protein have also begun to be available, including a line of chikuwa, a grilled, tube-shaped type of nerimono, by Yano Shōten. The company, based in Takamatsu in Kagawa Prefecture, manufactures and sells the aptly-named Kinniku (Muscle) Chikuwa made from Alaska pollock and nut-based plant protein. Launched online in September 2021, the product claims to have “twice the protein” as standard chikuwa. According to the producer, Kinniku Chikuwa has attracted customers from across Japan and supply can barely keep up with demand. 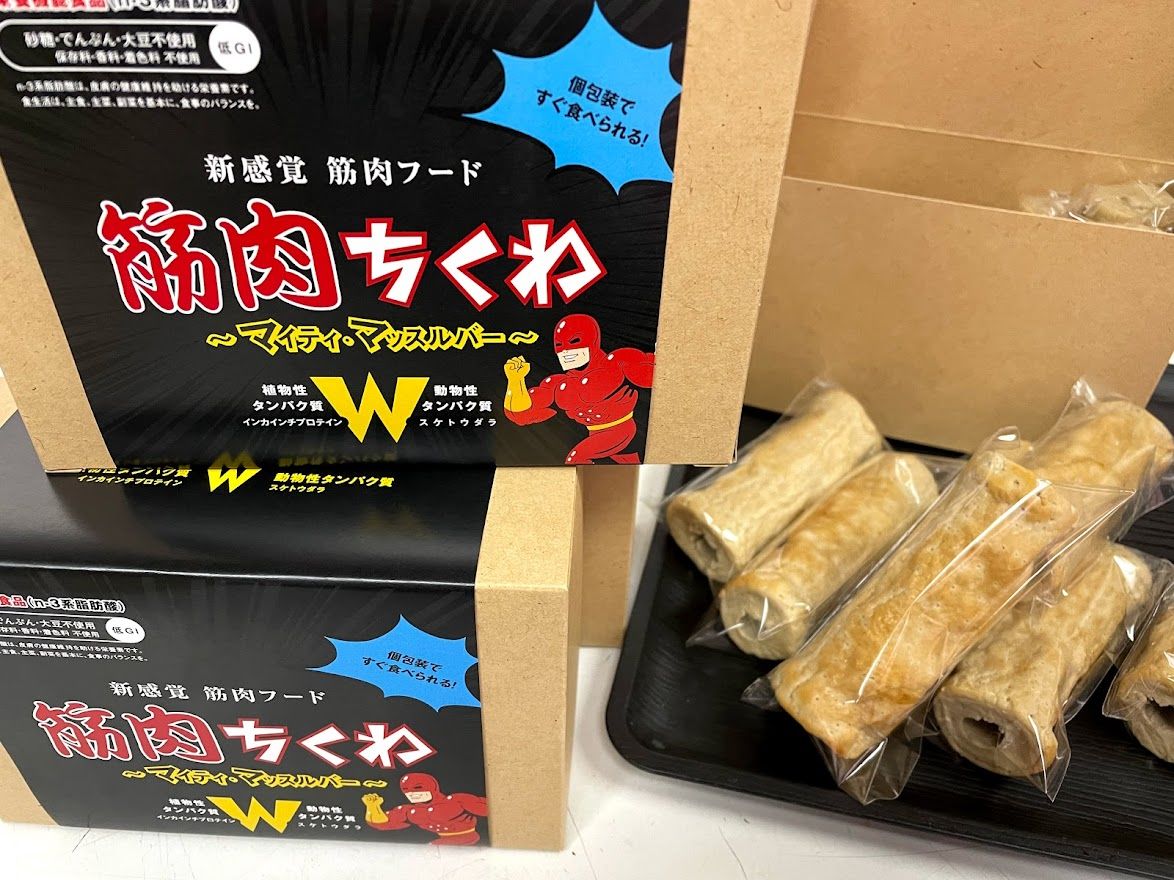 The pandemic has made consumers more health-conscious, and consumption and sales of nerimono are moving up. Nerimono have long been an integral, if unassuming, part of the Japanese diet, but have garnered renewed attention for helping people stay fit and healthy and in addressing the particular issues that come with an aging population. The time is ripe for stimulating demand for fish protein at home and abroad, and it appears that nerimono will enjoy sustained popularity into the future.

(Originally published in Japanese. Photos by Nippon.com unless otherwise noted.)