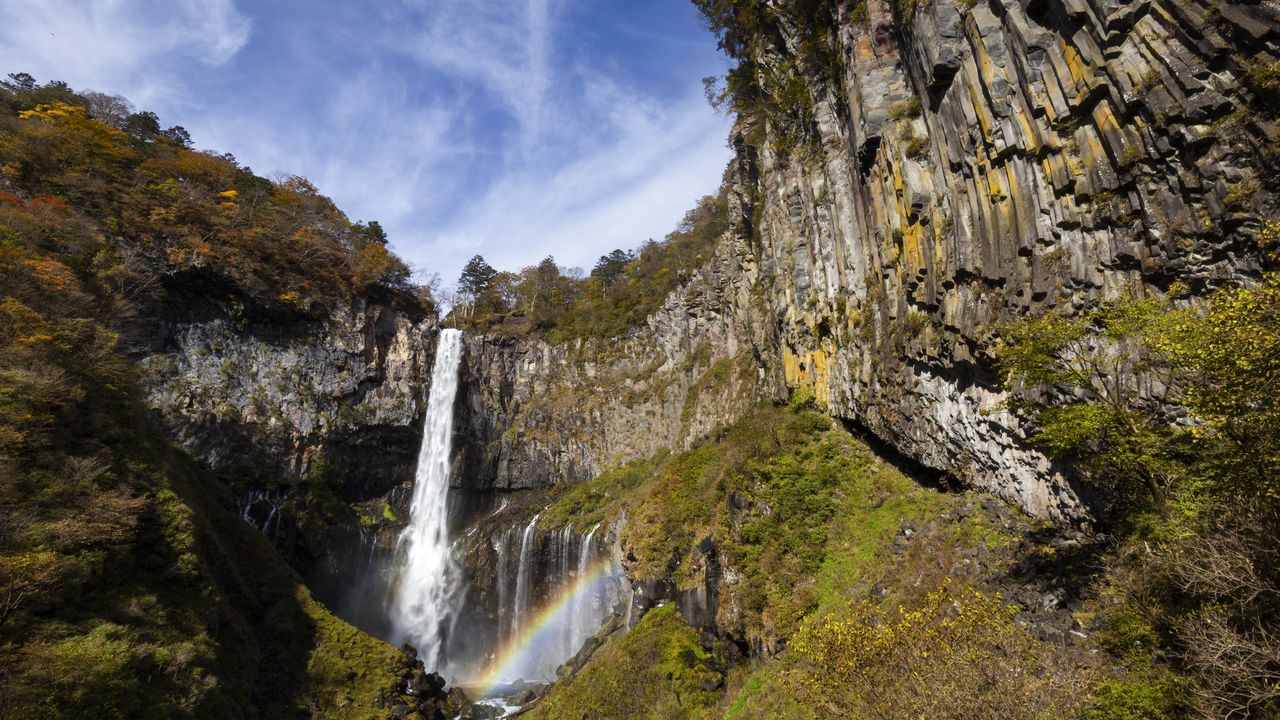 Travel Nov 22, 2021
One must-see sight when visiting Nikkō is Kegon Waterfall, ranked as one of Japan’s three most scenic. An elevator takes visitors down to an observation platform level with the waterfall basin, adding to the thrill. Ryūzu and Yutaki are two other waterfalls in Oku-Nikkō that are worth a visit as well.

Renowned for vibrant autumn foliage, Nikkō in Tochigi Prefecture is also home to dozens of attractive waterfalls, their clear waters flowing from lakes created by ancient volcanic activity in the Nikkō Mountains. Among the best known is Kegon Waterfall, which flows out of Lake Chūzenji, and which, along with Nachi Waterfall in Wakayama Prefecture and Fukuroda Falls in Ibaraki Prefecture, is considered as one the three most famous in the country.

Lake Chūzenji, the gateway to Oku-Nikkō, was created by an eruption of Mount Nantai. The lake itself is one of the highest in Japan at 1,269 meters above sea level. Senjōgahara, a highland plateau offering stunning naturals scenery and abundant hiking trails, and Yumoto hot springs are among the many attractions in the area, which is a popular escape from the summer heat and a draw during the fall foliage season. The lake, 25 kilometers in circumference, has only one outlet, from which Kegon Falls, 7 meters across, falls 97 meters down into the Daiya River. 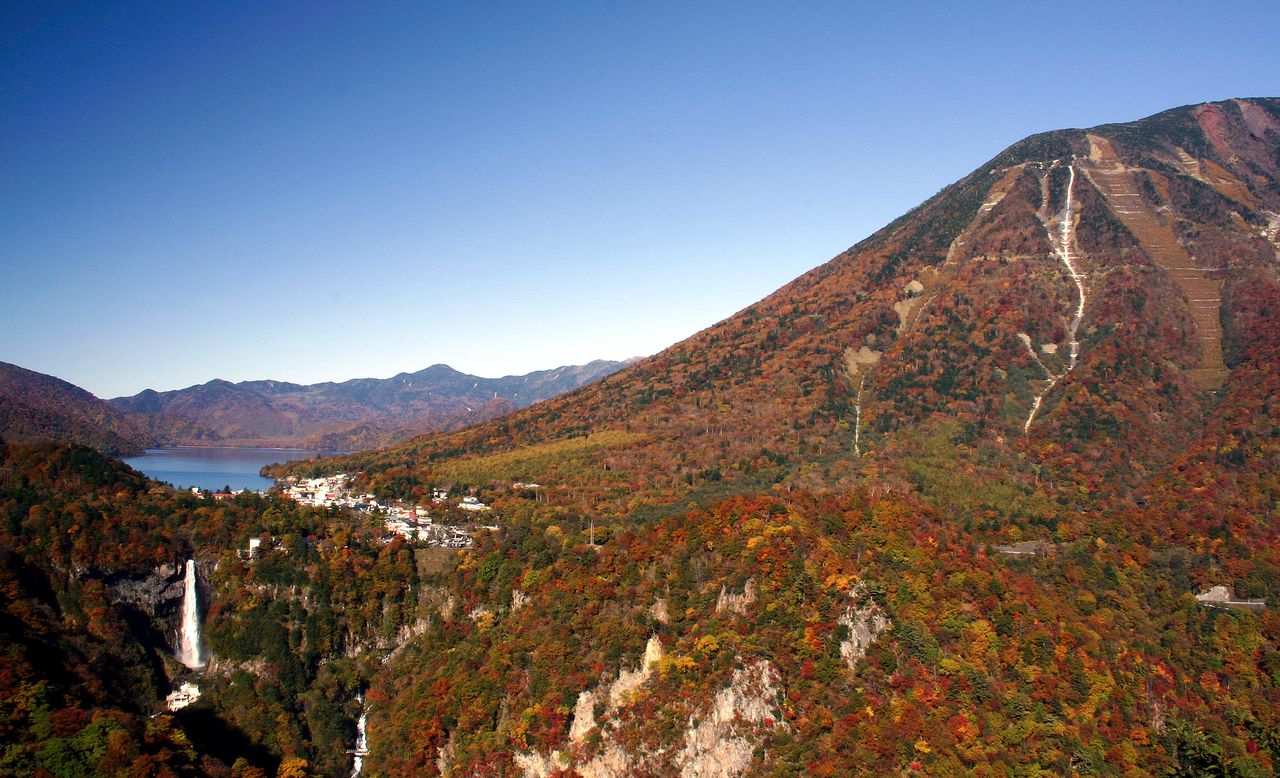 The view from the Akechidaira lookout. To the right is Mount Nantai, the sacred deity of Nikkō’s Futarasan Shrine. Kegon Waterfall can be seen flowing out of Lake Chūzenji, in the background at left. (Courtesy Tochigi Prefecture Tourism and Local Products Association)

Down, Down to the Foot of the Waterfall

Kegon Waterfall can be viewed in all its magnificence from two observation points. One is a lookout at the far end of the public parking area adjacent to the falls. From this viewing spot, which is free of charge, visitors overlook the waterfall, with the falling water visible through the foliage. For a closer look, level with the waterfall basin and directly facing the falls, visitors can take the Kegon Waterfall Elevator. 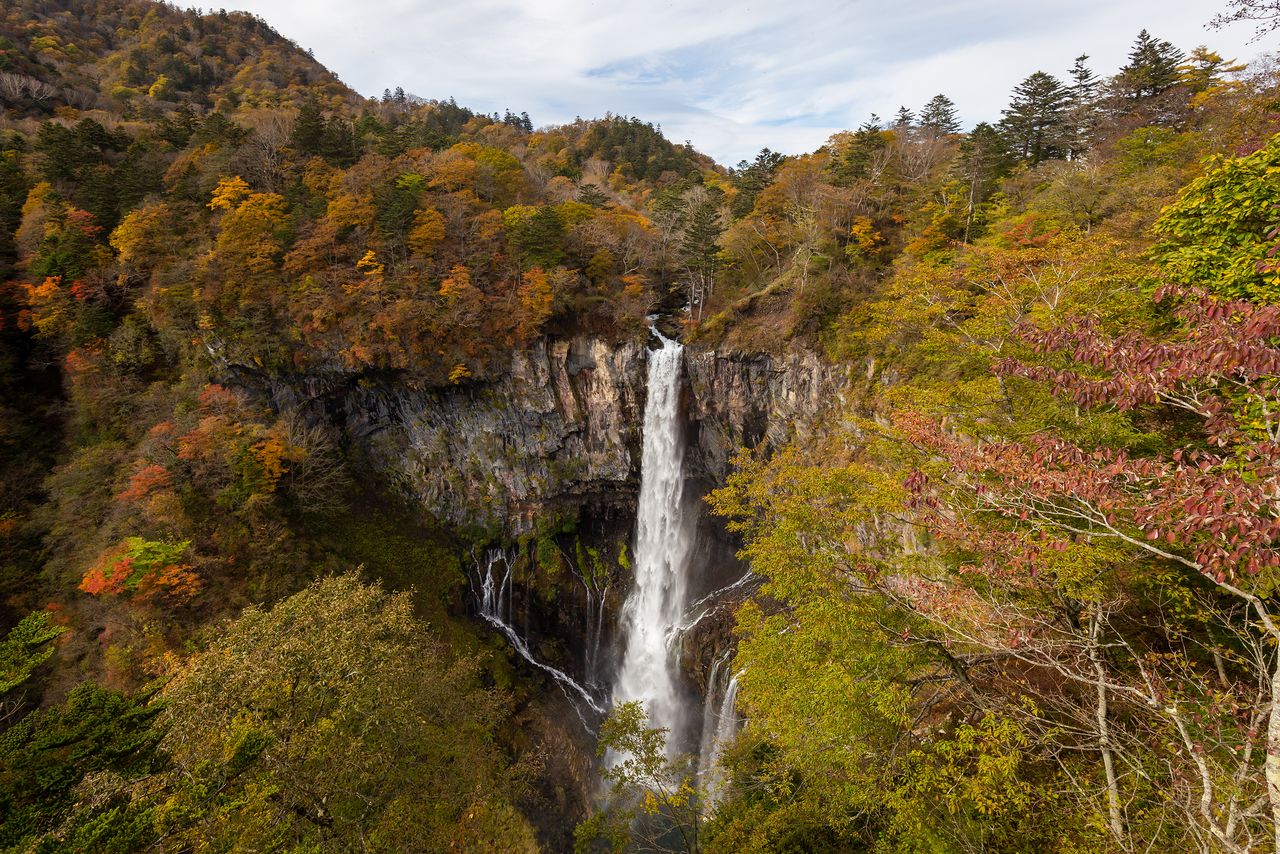 The view of the waterfall from the lookout at the far end of the parking area. 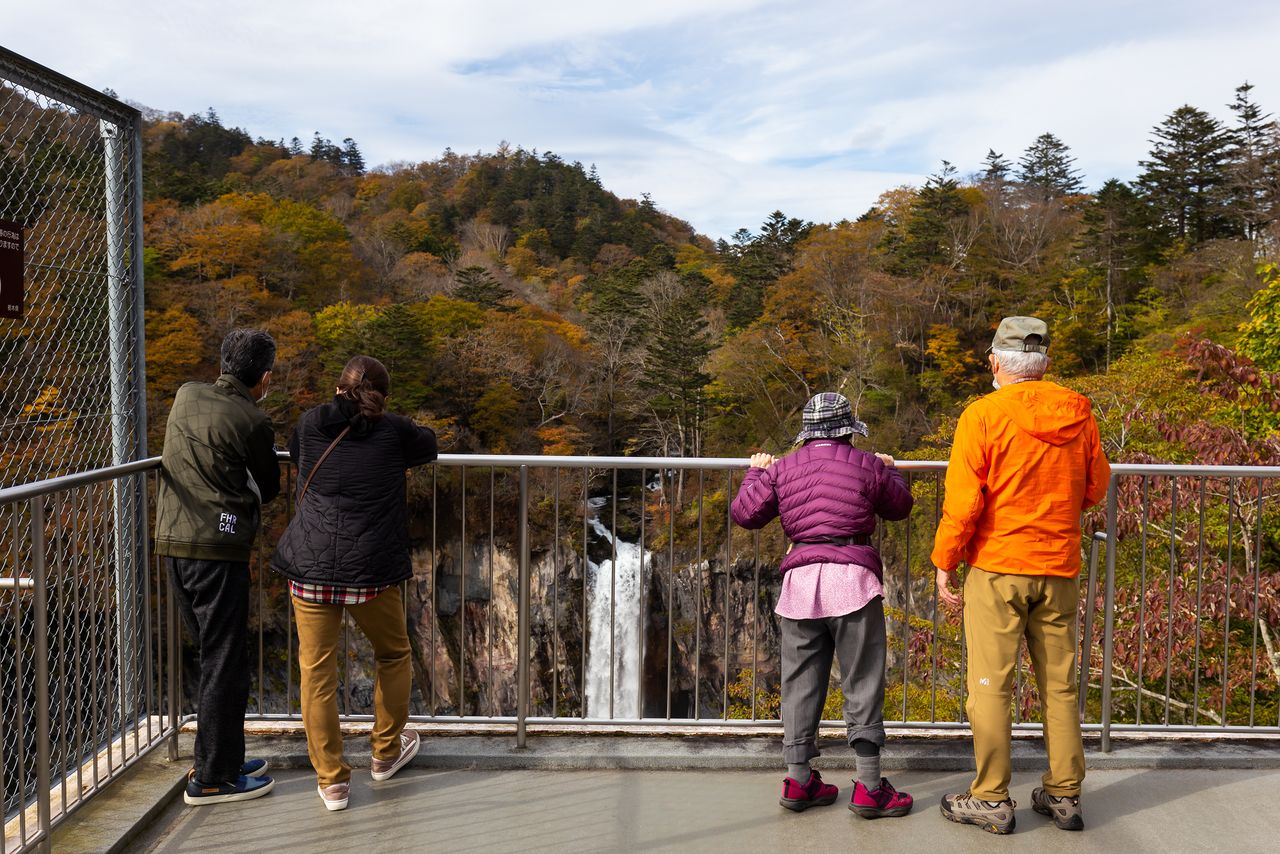 The breathtaking sight can be enjoyed from the lookout, free of charge. 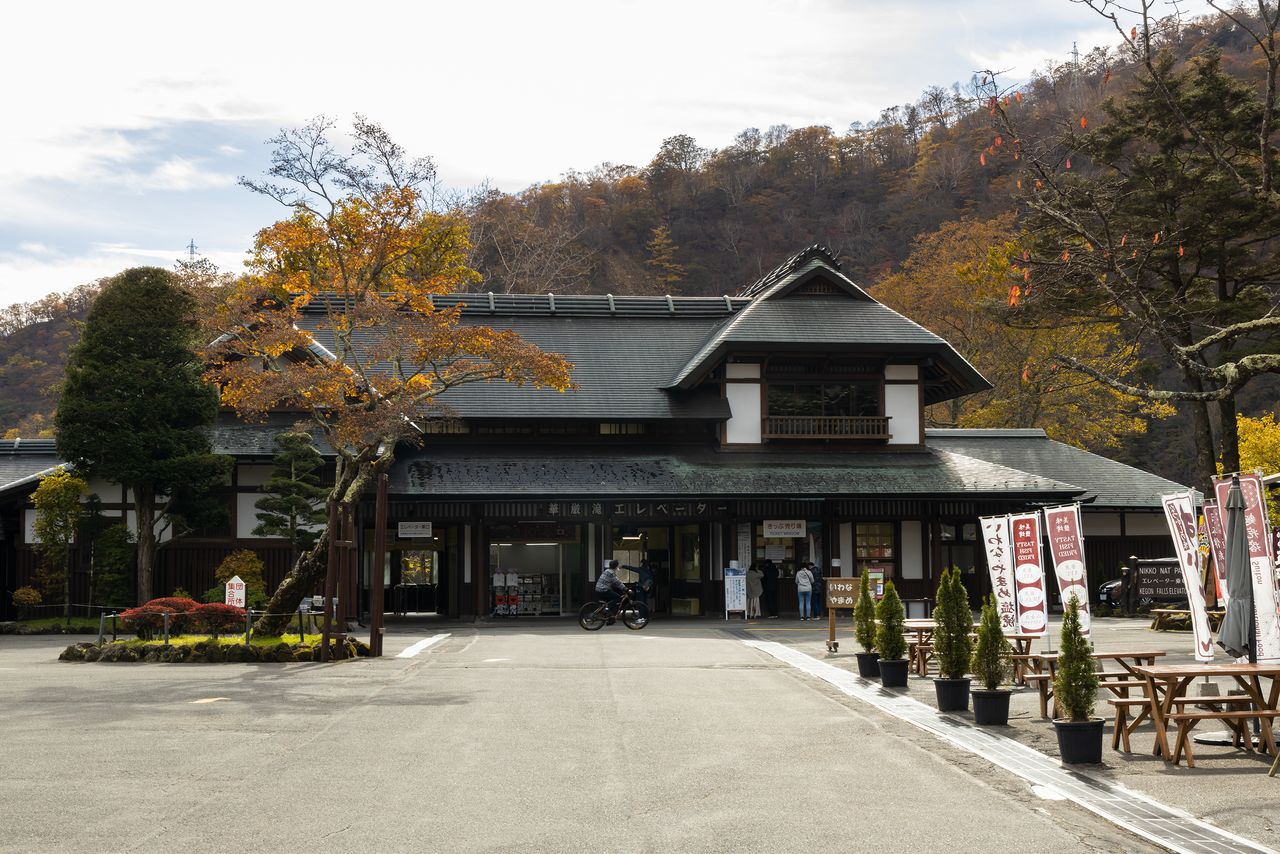 The Kegon Waterfall Elevator building, to the right of the lookout, where visitors can take an elevator down to the foot of the waterfall. The round-trip fare is ¥570 for adults and ¥340 for children.

This elevator, which began operating in 1930, takes visitors down 100 meters to the waterfall basin. The trip takes just 1 minute, the elevator doors opening to a long passageway leading to a three-level observation platform for viewing the waterfall and its basin, a gorge, and sheer cliff walls. 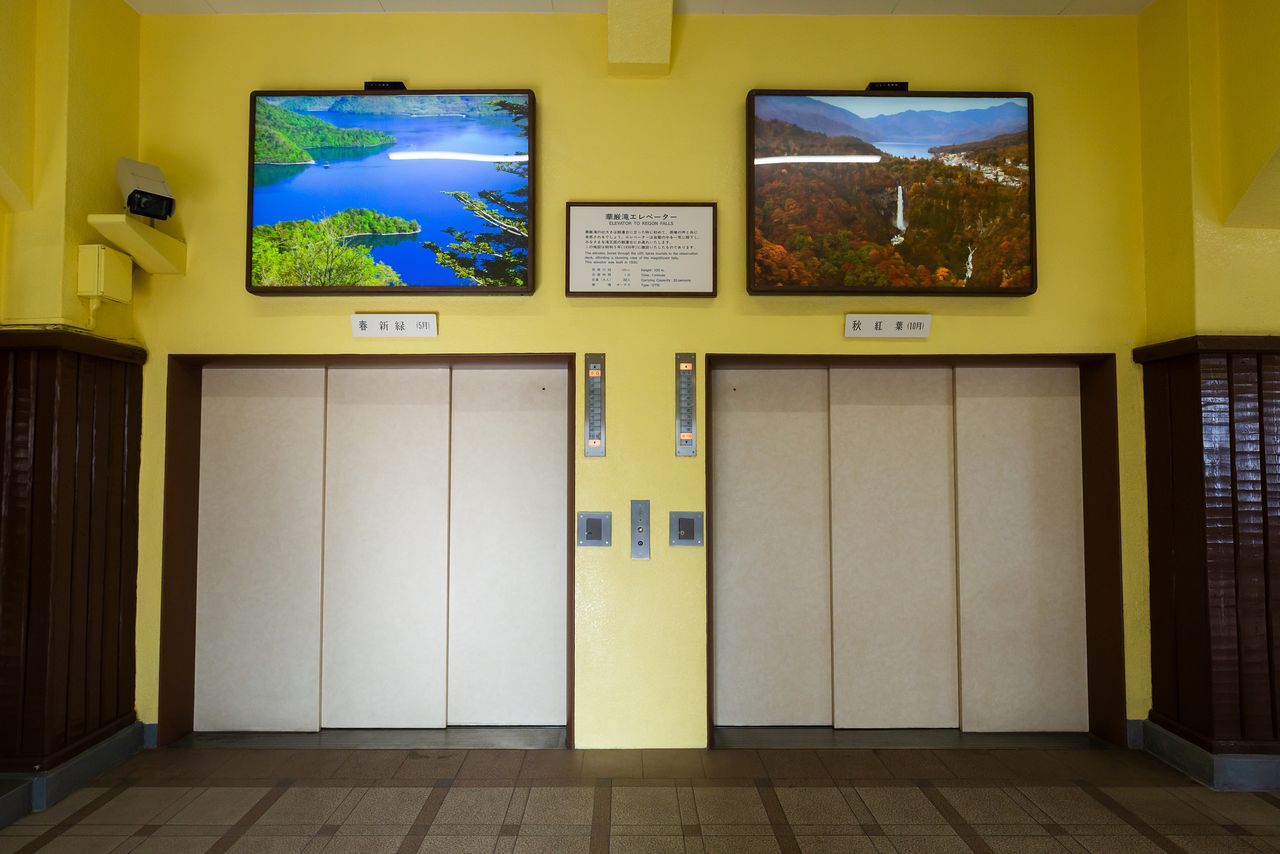 The elevators, each holding up to 30 passengers, travel straight down through solid rock. 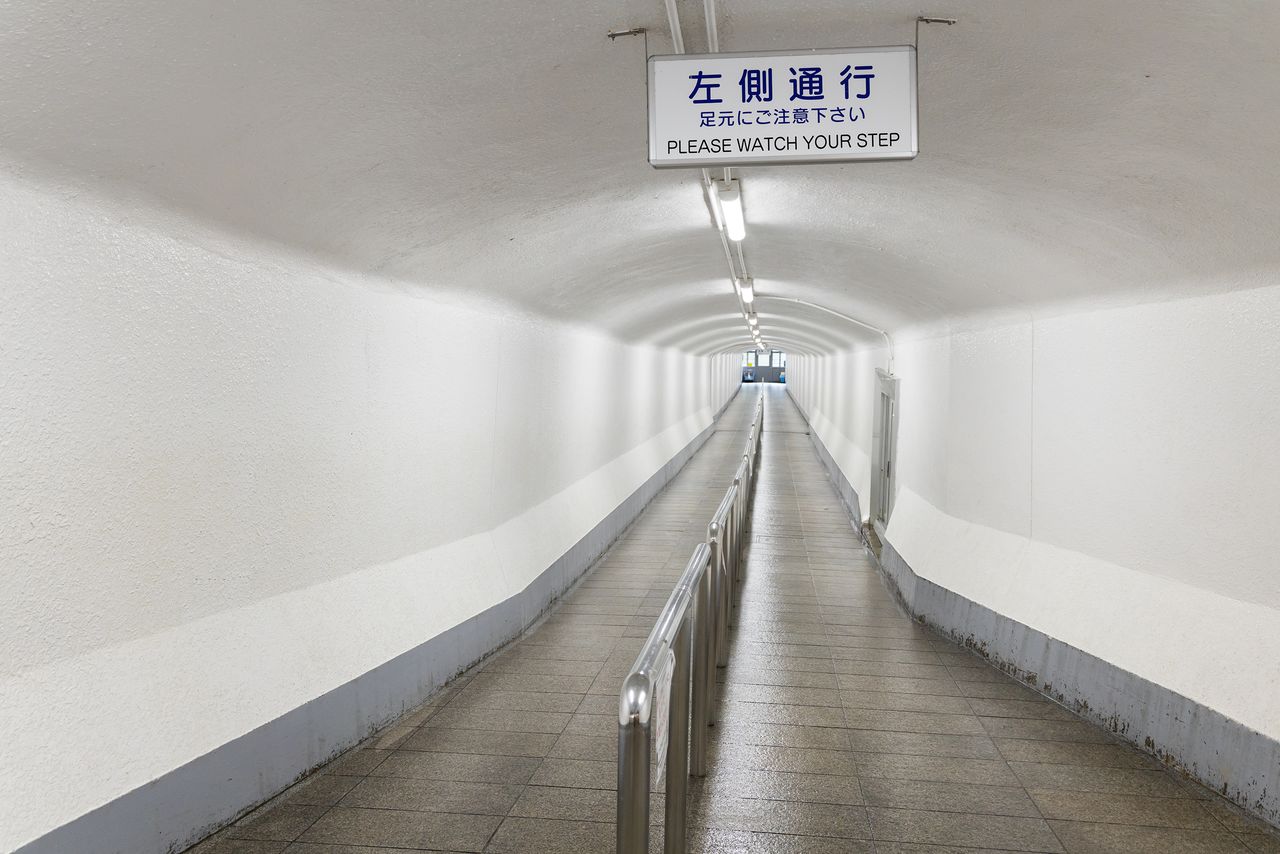 The long passageway leading to the observation platform. The spot is cool even in summer. 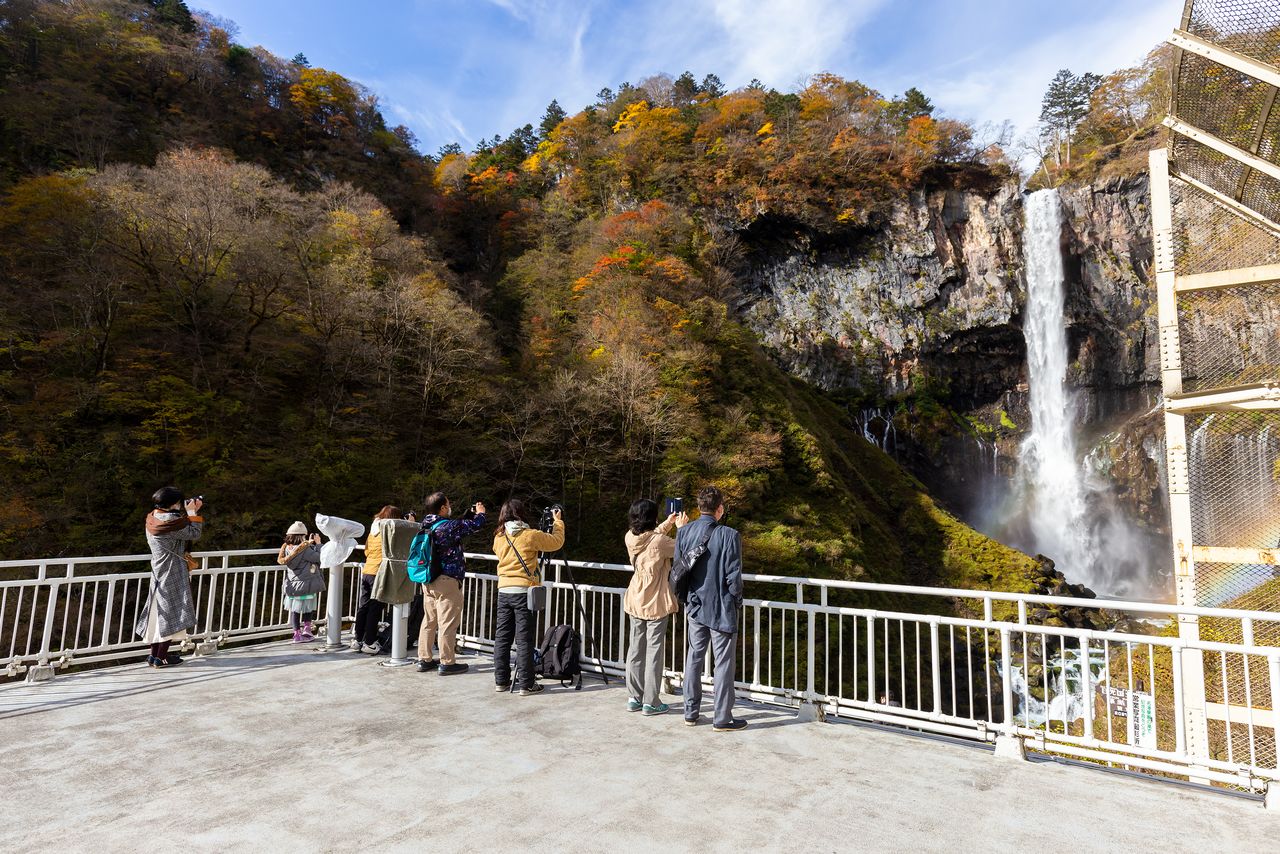 The topmost level of the observation platform affords a good view of the waterfall basin and the surrounding cliffs.

Kegon Waterfall flows at the rate of about 3 tons per second, although volume can increase in spring due to snowmelt or at the end of the rainy season. The waterfall basin, 4.5 meters deep, is surrounded by twelve smaller falls. The thundering waters create spray which, when carried by the wind, can reach the observation platform 150 meters away. The waterfall faces east and rainbows often form when the sun shines through, especially in the early morning when the weather is clear, creating an especially beautiful sight. 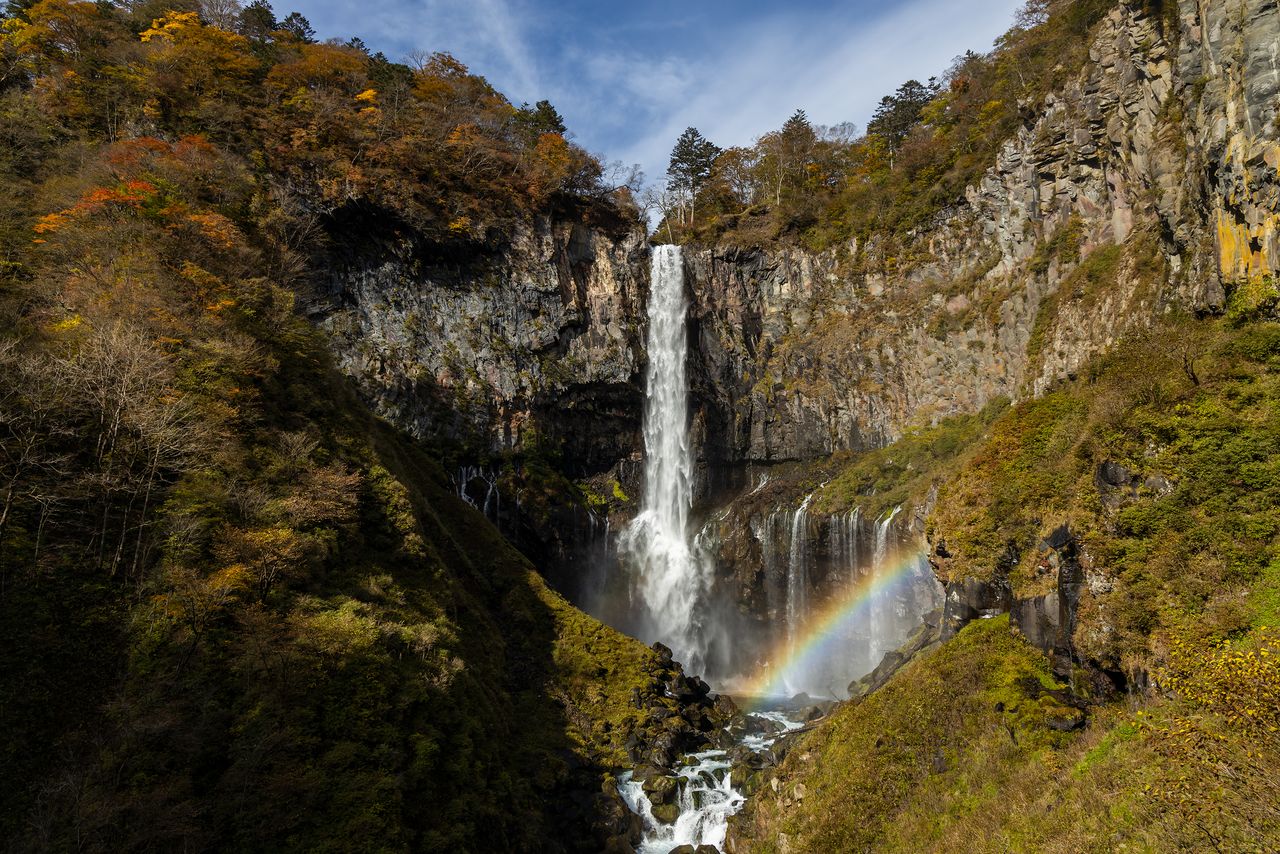 A rainbow spans the waterfall basin. This photo was taken before 9:00 am in late October. 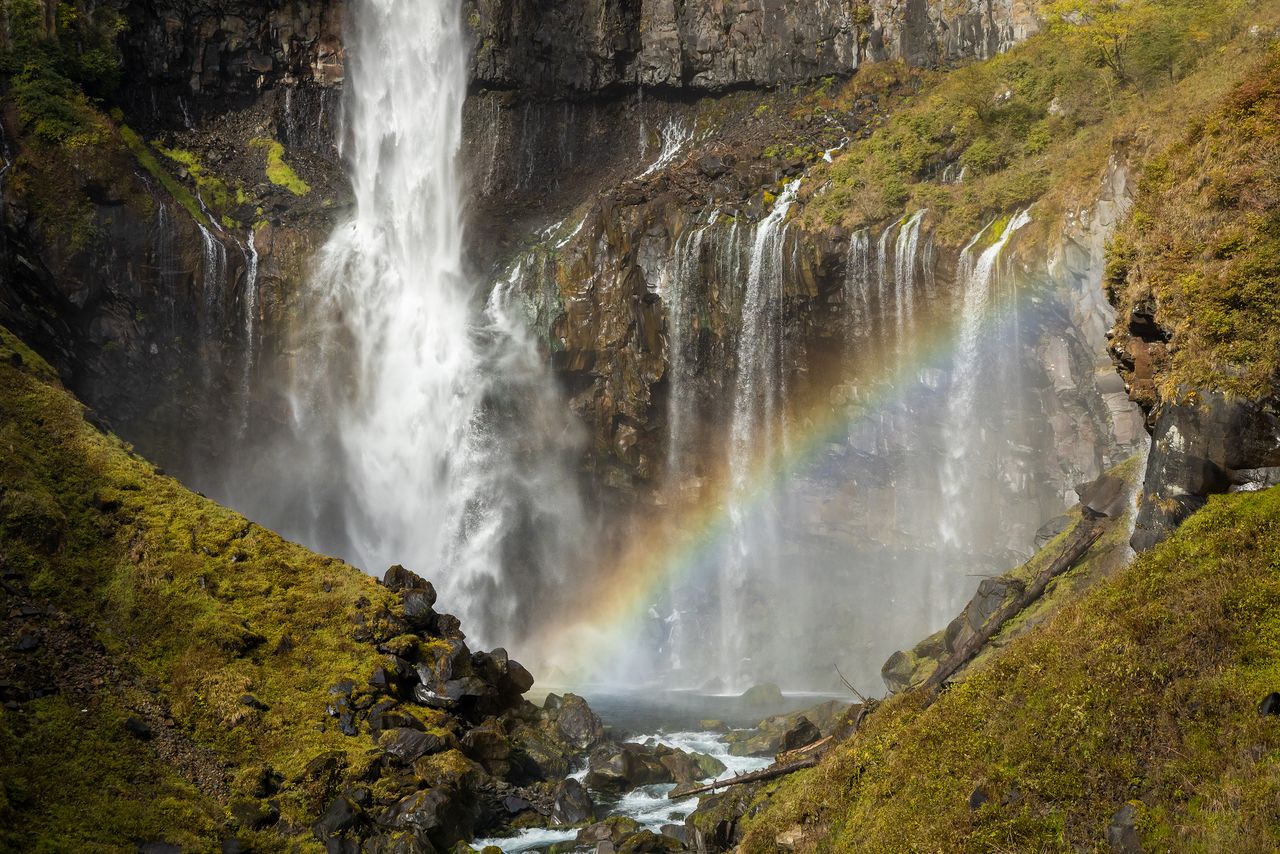 The smaller waterfalls at the bottom are equally entrancing. 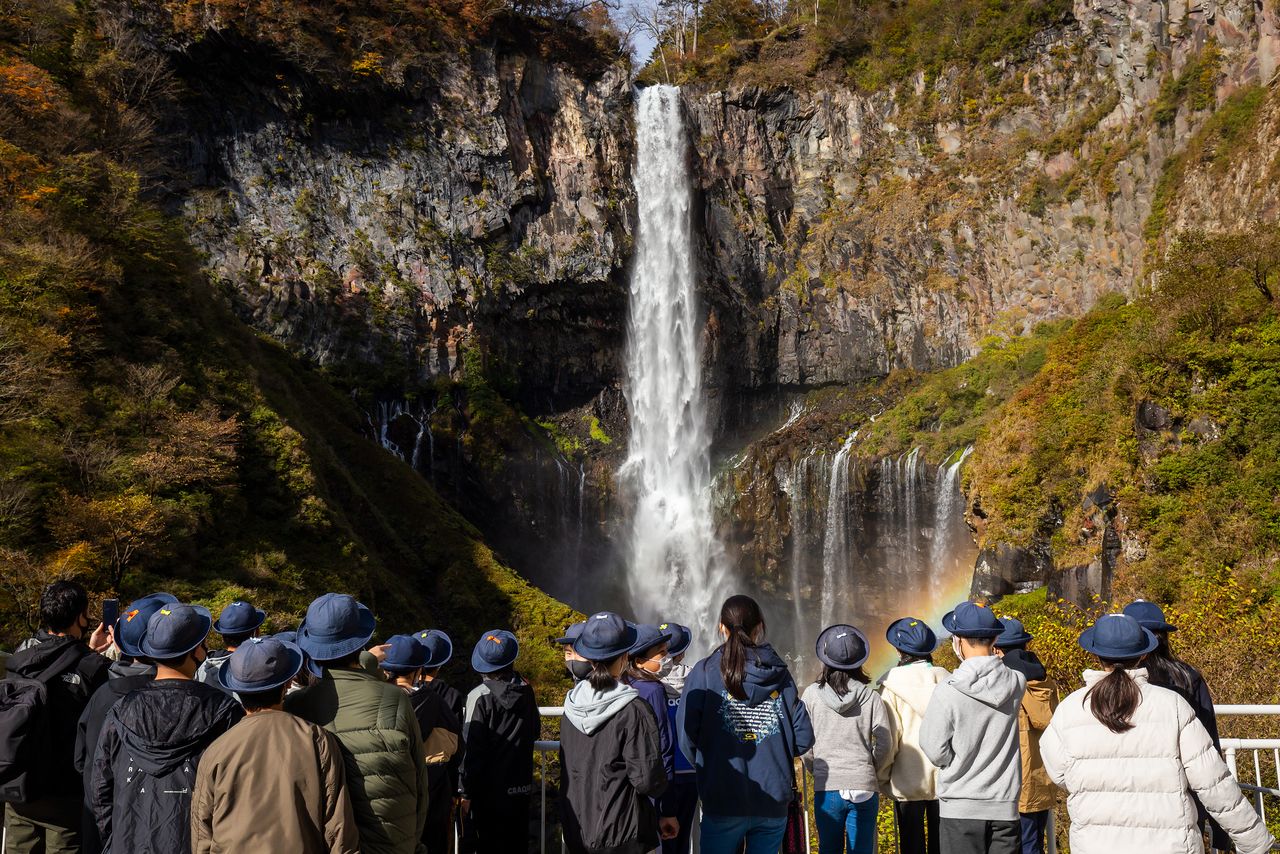 The falls are a popular destination for school excursions.

Kegon Waterfall is surrounded by huge walls of volcanic rock and formations known as columnar joints. These five- or six-sided fissures were formed due to the slow cooling of lava after an eruption, and the walls’ rugged appearance give the waterfall added majesty.

The name Kegon is said to come from the Flower Garland Sutra, the foundational text of the Kegon school of Buddhism. But some sources maintain that the waterfall’s name derives from the colorful springtime sight of azaleas blooming in the cliff walls. The water from the falls flows into Kegon Gorge, where the 20-meter tall Nehan Waterfall is another notable sight. 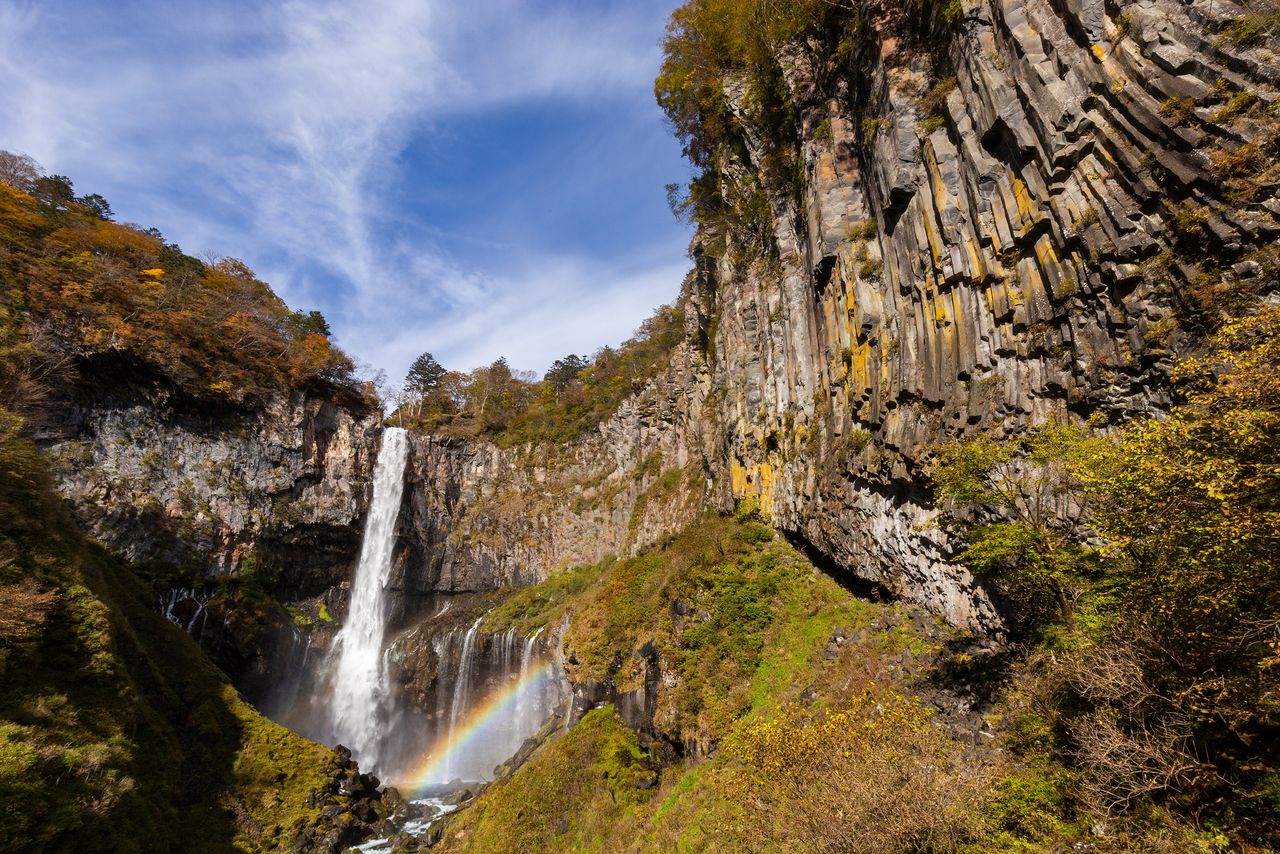 Cliff walls visible from the observation platform are an impressive sight. 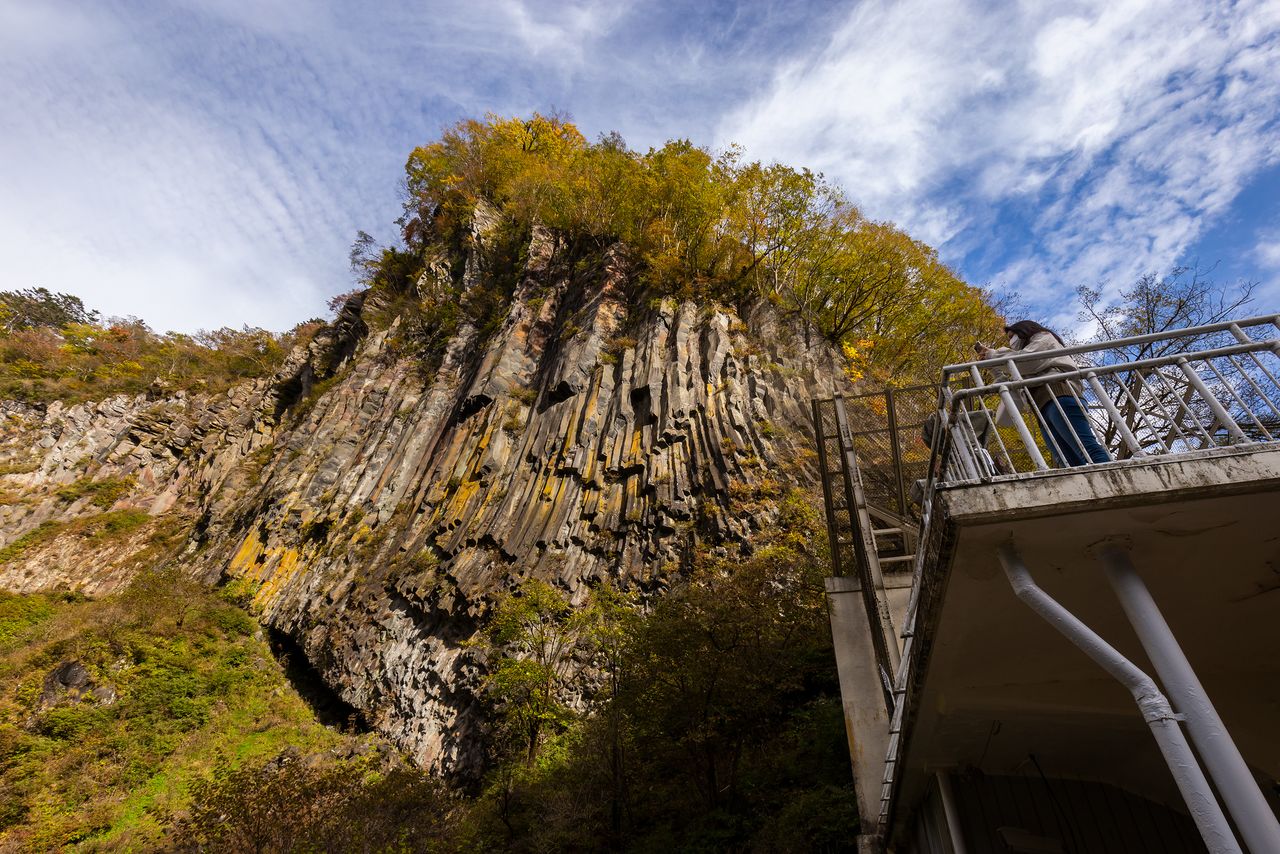 Columnar joints formed eons ago as lava slowly cooled after an eruption. 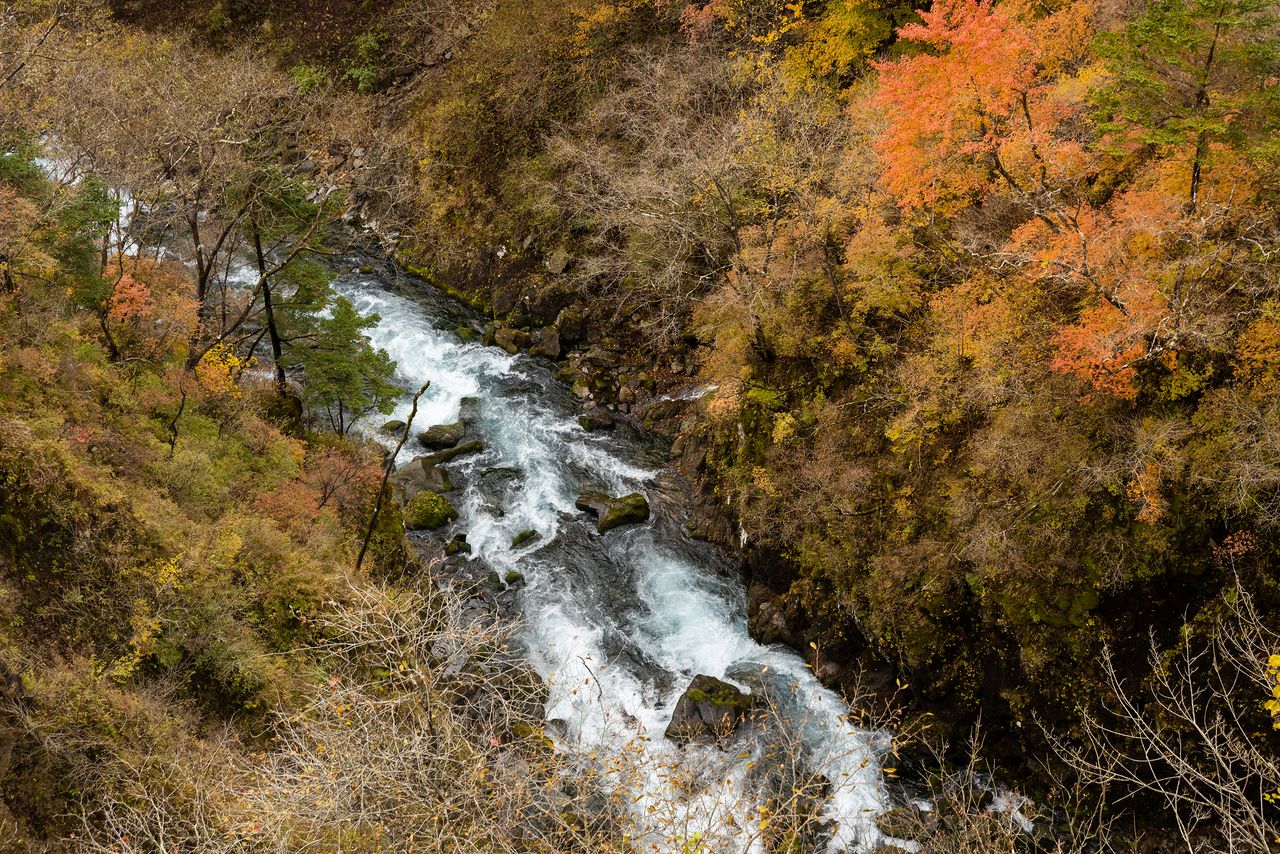 The steep-sided Kegon Gorge is a popular spot for foliage viewing.

In addition to Kegon Falls, Nikkō has two other famous waterfalls, Ryūzu and Yutaki. Both are along the Yukawa River, which flows from Lake Yunoko to Lake Chūzenji. Ryūzu, which is downriver, spreads 10 meters wide over rocks in stepped formation over 210 meters. Visitors can enjoy a closer view of the waters from an adjacent walking trail.

Yutaki, at the southern end of Lake Yunoko, can be reached by road via Senjōgahara. An observation deck allows a close look at the waterfall basin. The waterfall’s vertical drop is 70 meters, and the waters spreading veil-like over a 110-meter-high rock face is a beautiful sight. 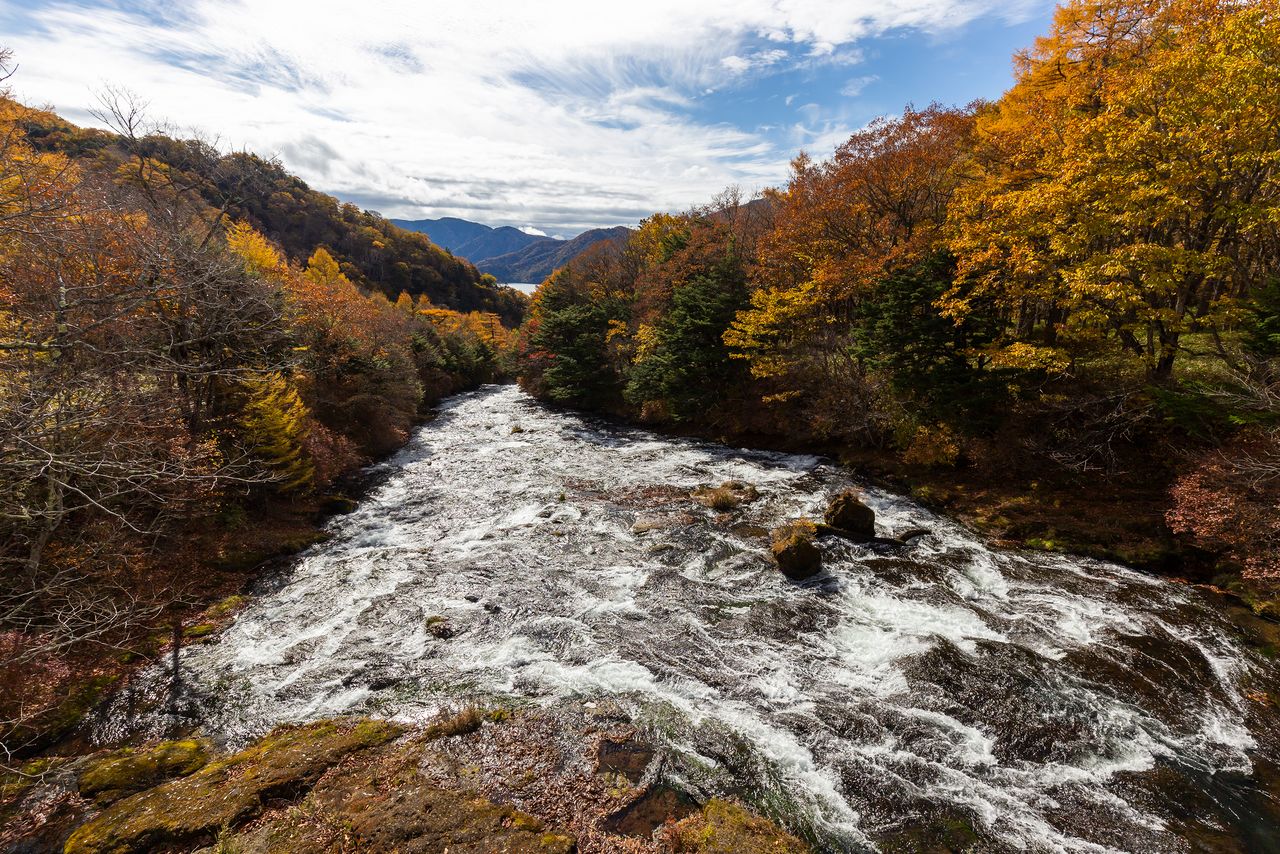 The view from Ryūzu Bridge above the falls. 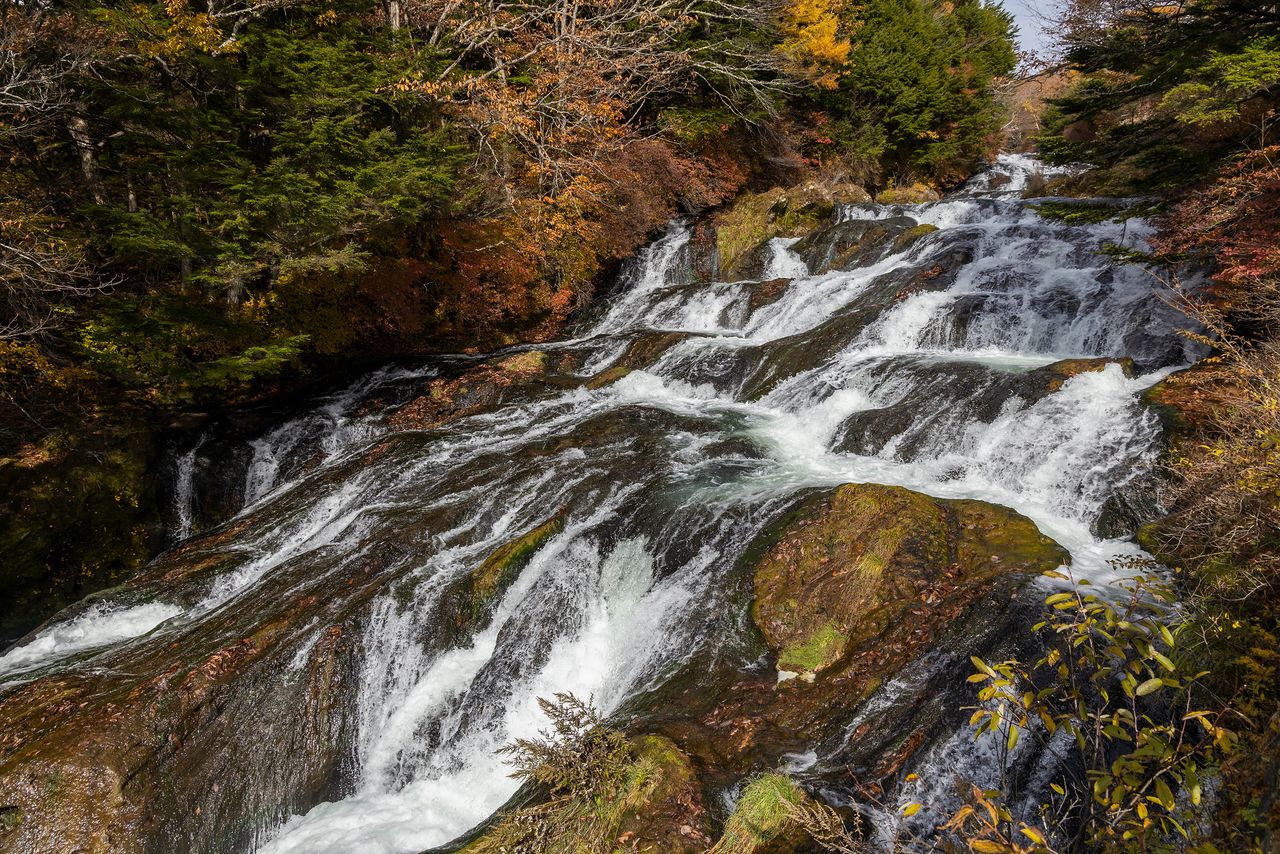 There is a walking trail along Ryūzu Waterfall. This photo was taken at a lookout midway along the trail. 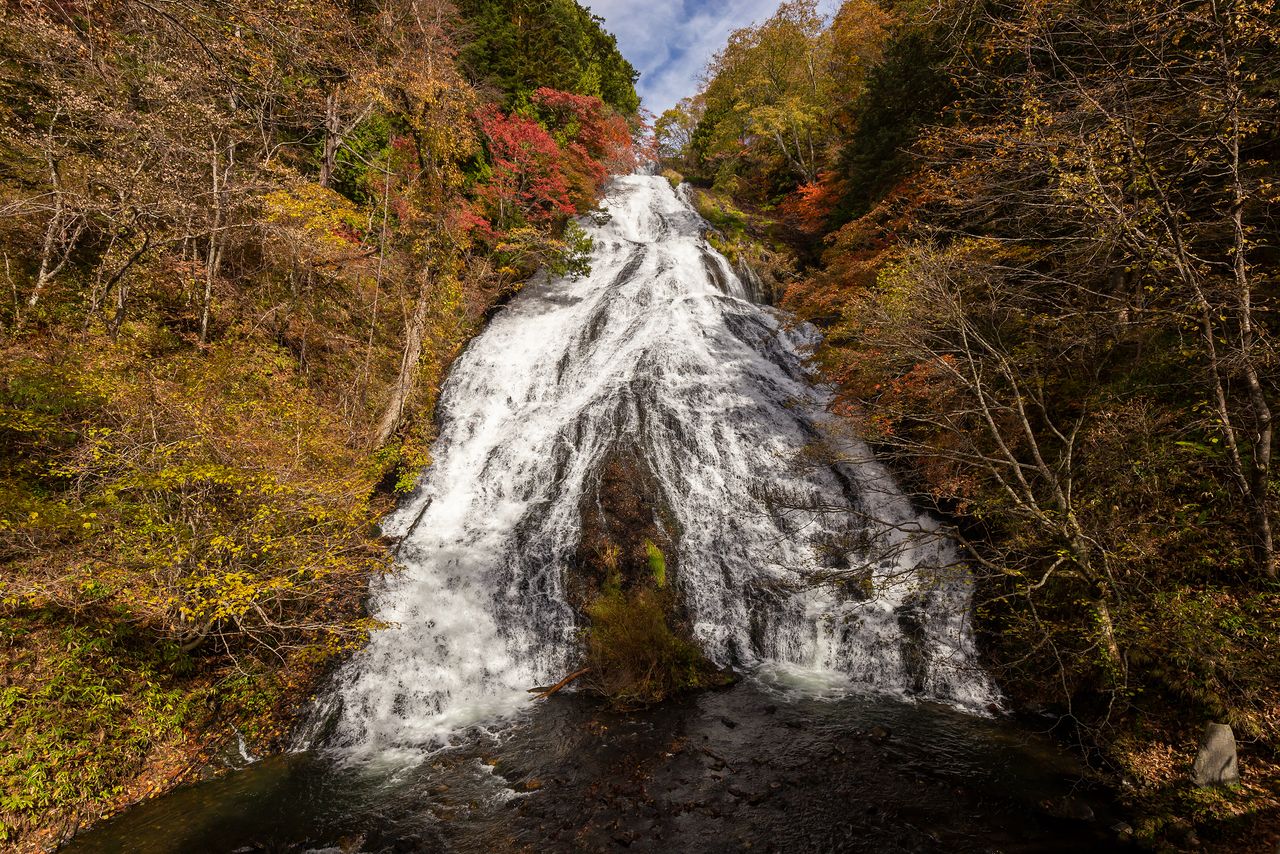 Yutaki, photographed from a lookout platform. The waterfall splits into two streams near the bottom. 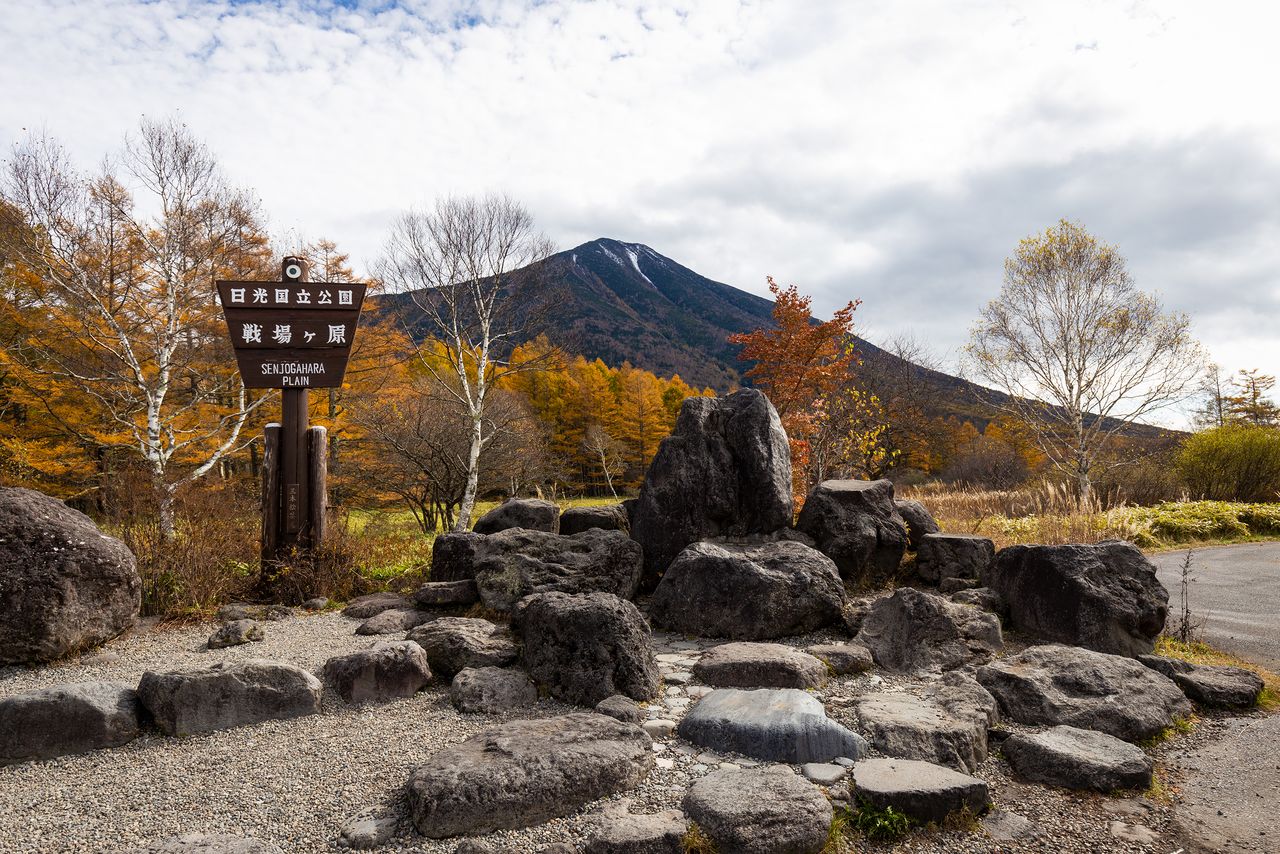 A hiking trail connects Senjōgahara with Yutaki. Mount Nantai is visible in the background.