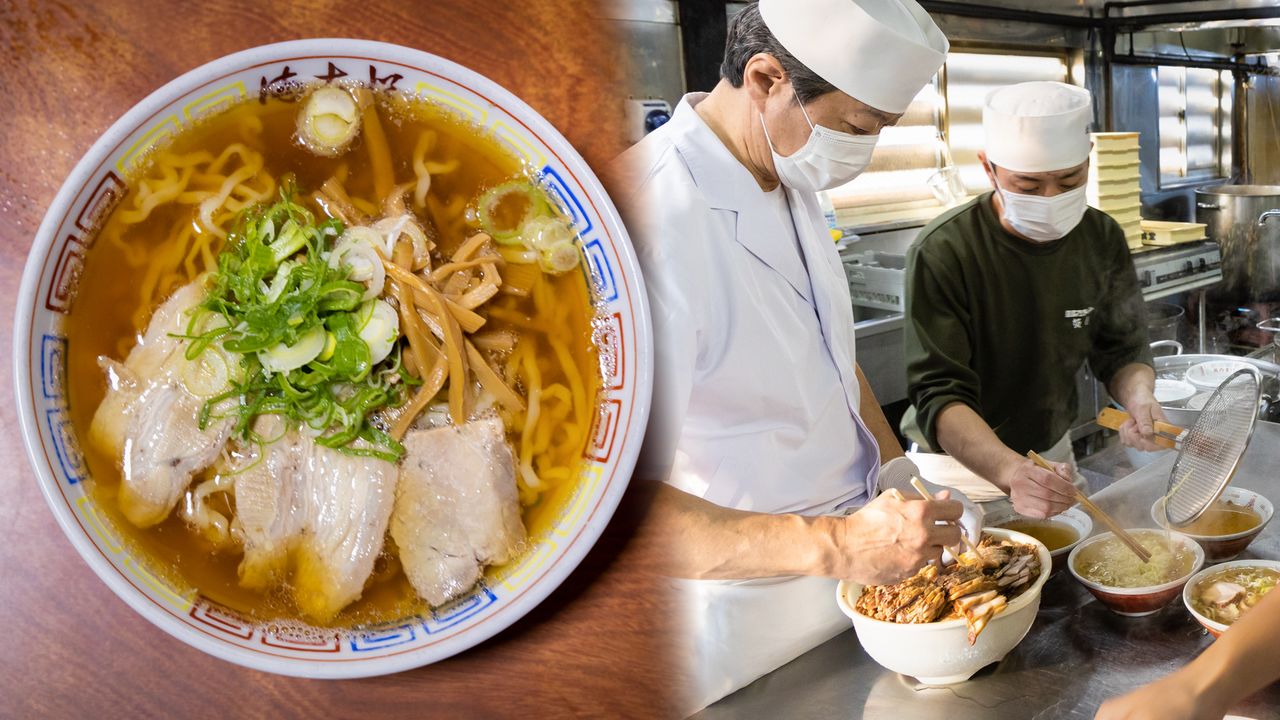 Travel Food and Drink Feb 25, 2022
Kitakata ranks among Japan’s “big three” ramen noodle hubs, attracting fans from all over the country. How has Kitakata, a relatively small city, managed to become a ramen mecca? We make the rounds of the destination’s three most notable ramen shops to discover the secret of their popularity.

Kitakata stands together with Sapporo and Hakata as one of Japan’s top three destinations for ramen noodles.

Kitakata is a small city in the mountainous inland Aizu region of Fukushima Prefecture. At the height of the ramen boom in the 1980s, it had about 30,000 inhabitants but over 120 ramen eateries, all offering tasty noodles on a par with big-city offerings. Residents even have the interesting habit of eating ramen first thing in the morning.

Busy in the kitchen at Bannai Shokudō, Kitakata’s most renowned ramen shop. Diners start pouring in at 7:00 in the morning.

Genraiken, a Chinese food restaurant, styles itself “the original” Kitakata ramen eatery. Its plain-looking bowl of noodles comes in a light yet deeply flavored soy-sauce soup that clings perfectly to the curly, medium-thick chewy noodles. Regulars claim that Kitakata ramen is something you can eat every day and yet keep coming back for more. 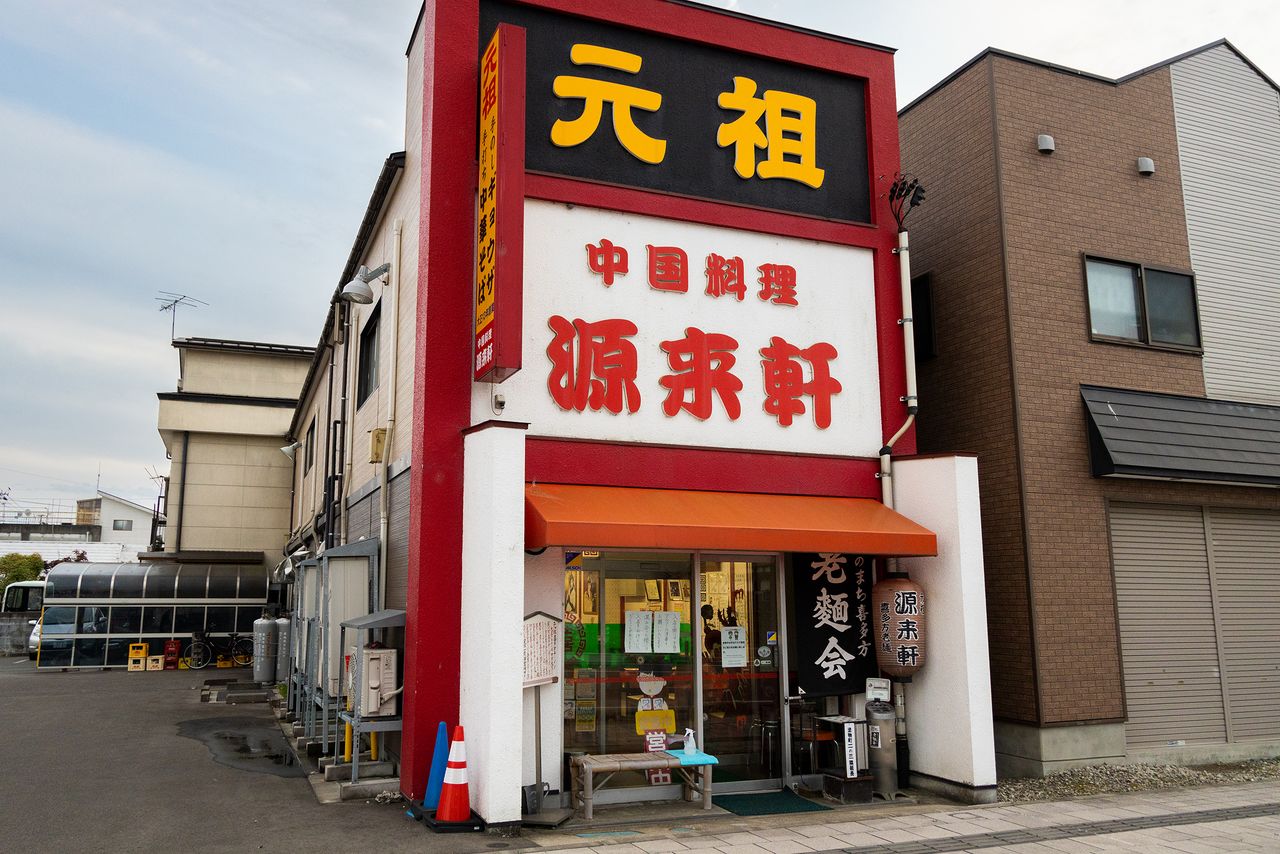 The Genraiken shop is a 6-minute walk from Kitakata Station. 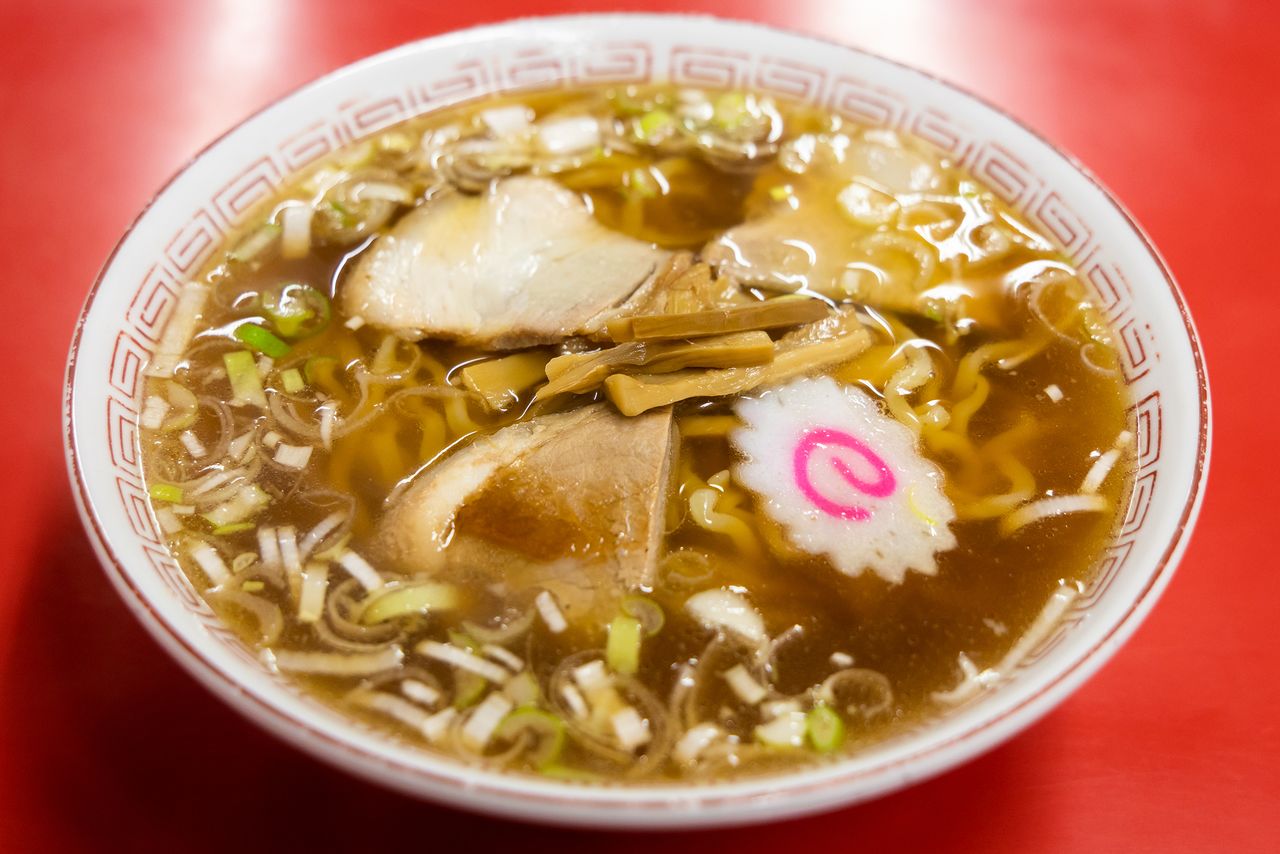 Genraiken opened in the mid-1920s, founded by Ban Kinsei, a Chinese immigrant who settled in the area. He came to Kitakata because his uncle lived there, but unable to find a job, he began selling Chinese noodles from a street cart. Through trial and error, he arrived at the taste of the noodles he was familiar with in China, and later opened Genraiken.

Ban was the originator of the distinctive Kitakata ramen noodle, which contains more water than other ramen noodles and is left to age before cooking. He shared his noodle recipe generously and trained many ramen cooks who then went on to open their own shops. Many noodle makers also modeled their product on the Genraiken noodle. 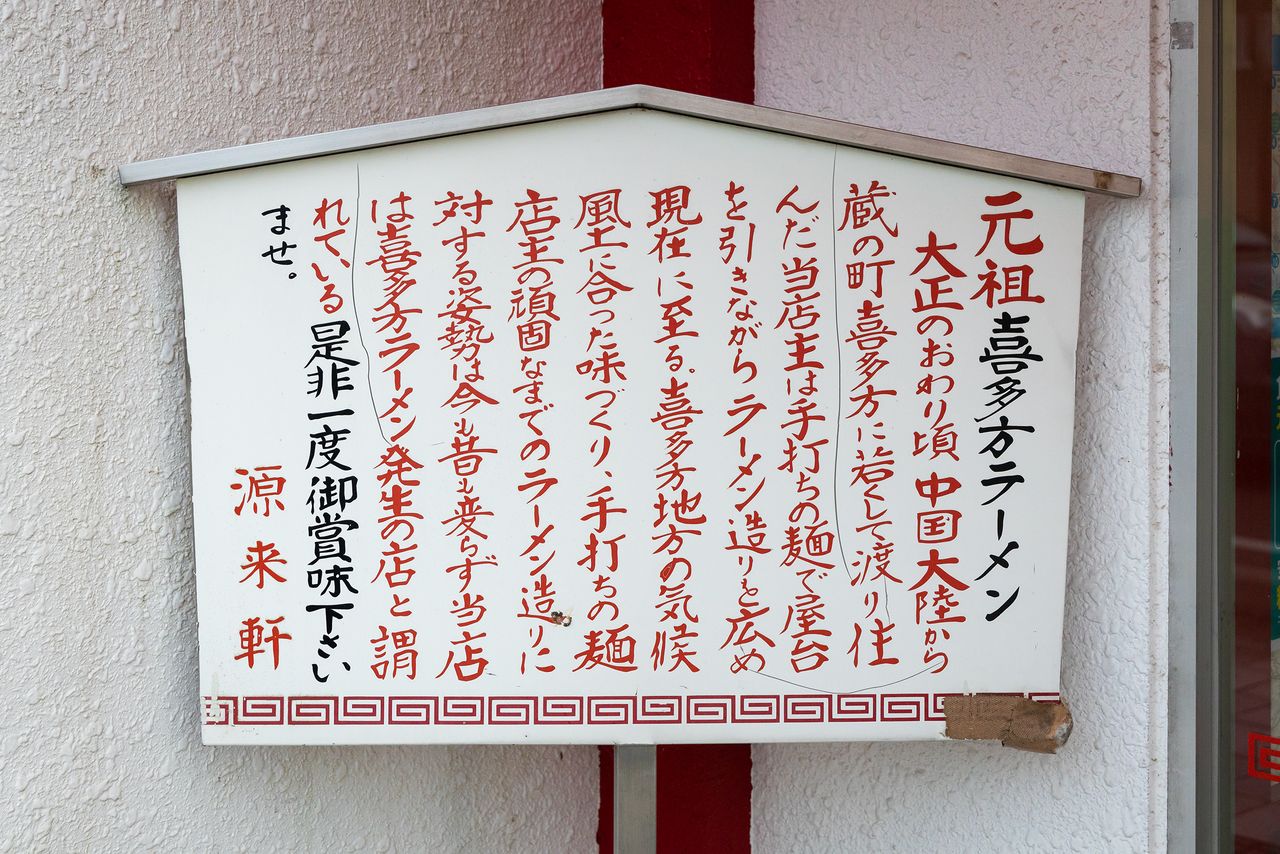 As noted above, the flat Kitakata noodles have a higher water content than other typical ramen noodles. The soup is usually soy sauce-flavored, although salty soup is also popular. Some eateries even serve ramen in miso-flavored soup or chilled noodles eaten with a dipping sauce. Along with Genraiken, Makoto Shokudō, which serves ramen in a soy-sauce-flavored soup, and Bannai Shokudō, where the soup is salt flavored, are the local “big three.” 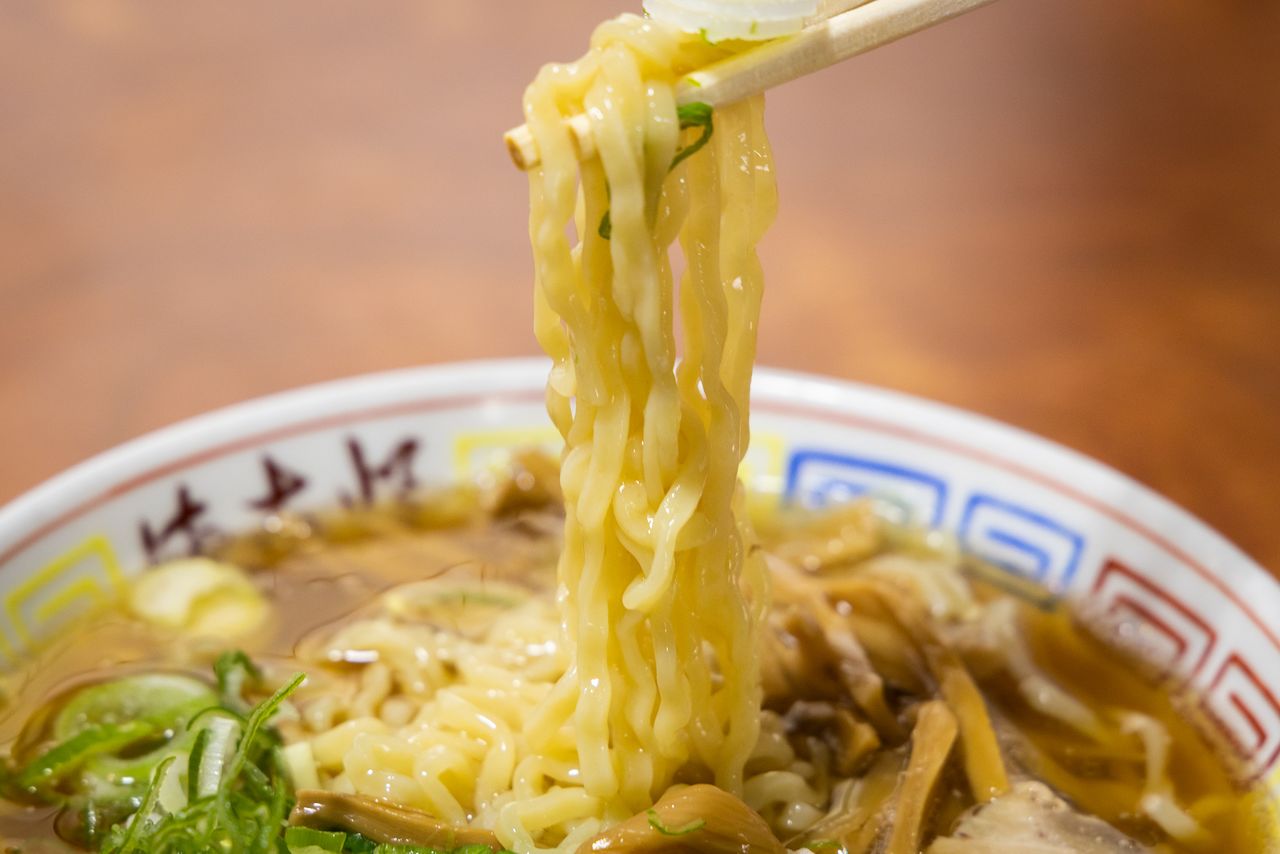 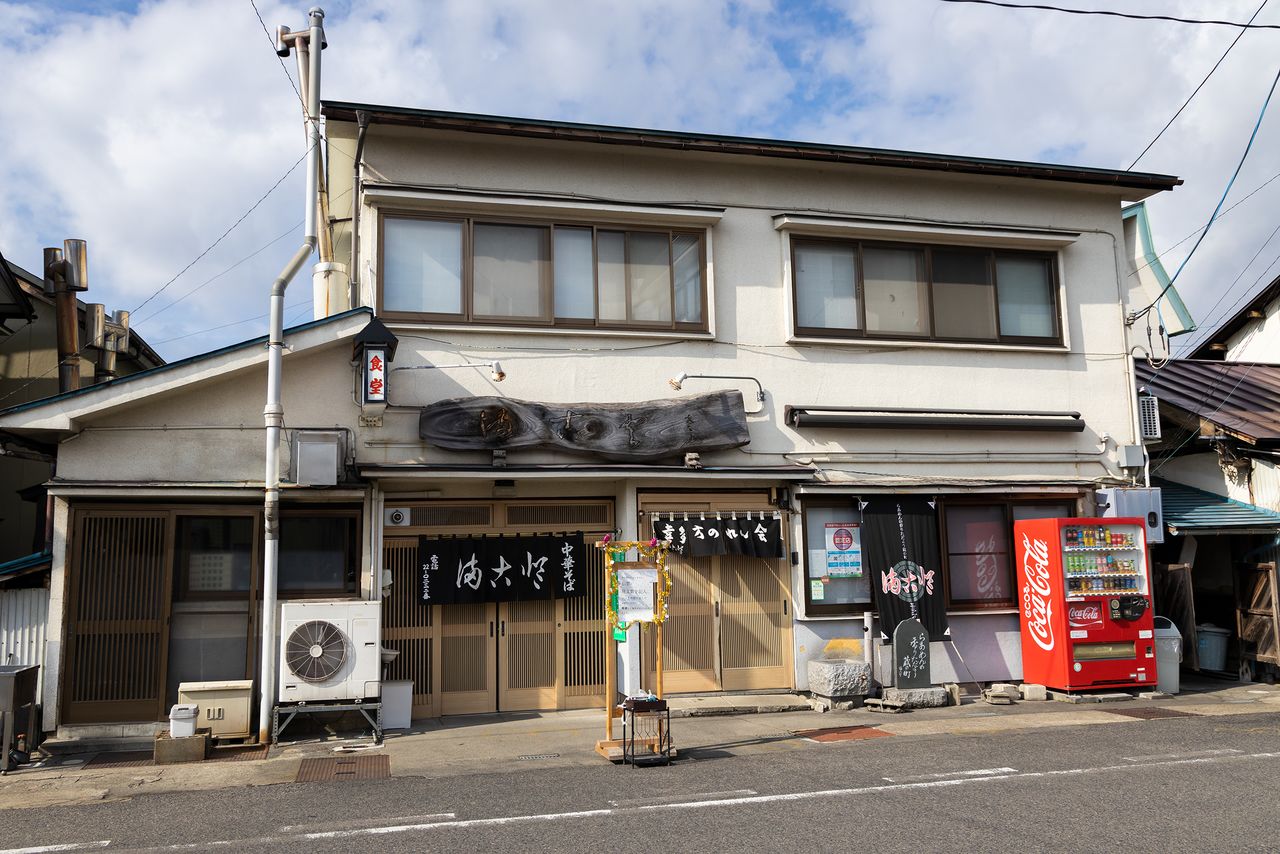 Makoto Shokudō is near the Kitakata city office. Ramen lovers start lining up before the shop opens, just like they do at Bannai Shokudō.

Satō Ume, Makoto Shokudō’s first owner, started the shop in the late 1940s. She worked hard to perfect her soup, creating a soy-sauce version made from small, dried sardines and pork bone broth that became the shop’s signature touch.

The soup is on the rich side and has a deep, satisfying flavor. But its clean aftertaste leaves diners ready to enjoy it again the next day. Packs of ramen are on sale next to the cash register, and even though customers’ hunger may be sated, they will surely be tempted to take some home. 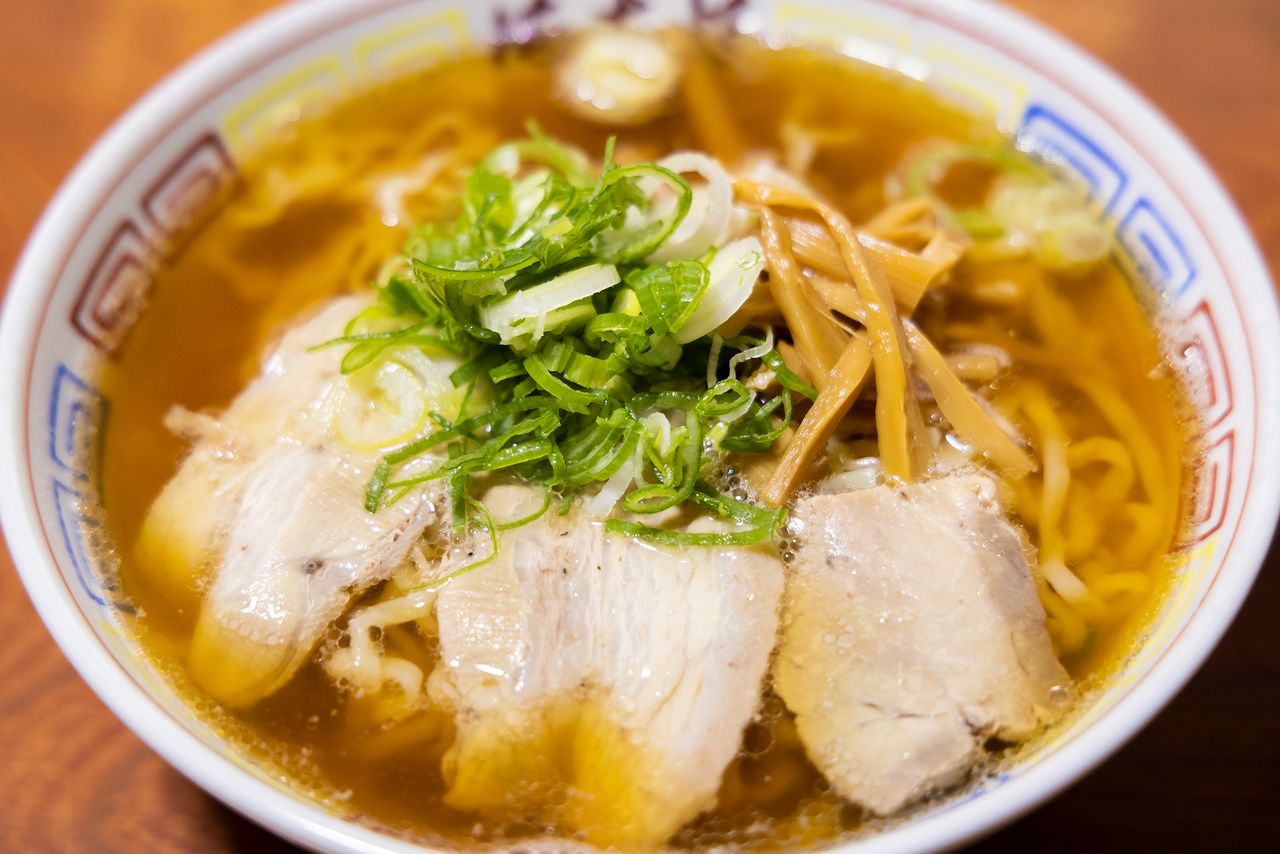 The dried sardine and pork bone broth at Makoto Shokudō is a perfect balance of lightness and richness.

The best known of the Kitakata “big three” may be Bannai Shokudō, famous for its niku soba, delicious noodles topped with an extra-generous helping of chāshū simmered pork belly. 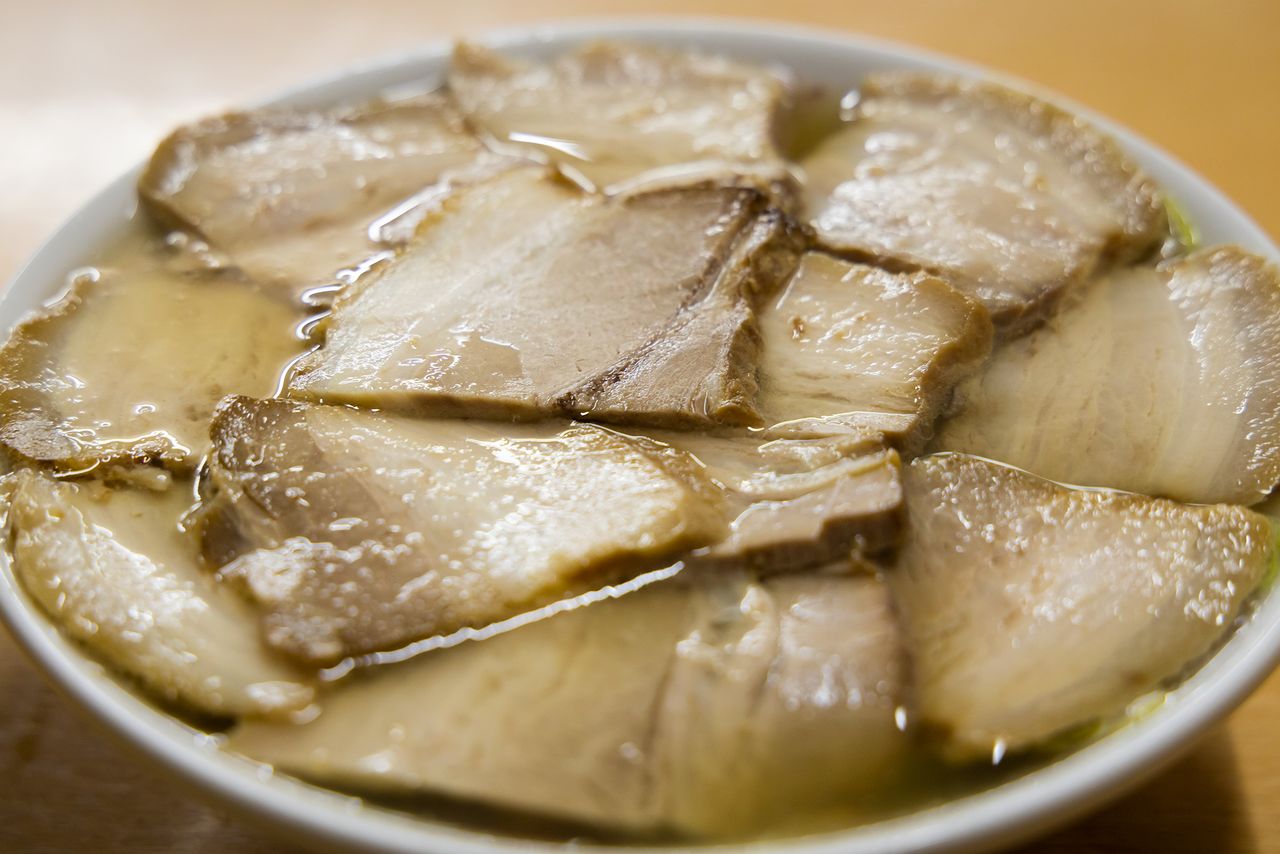 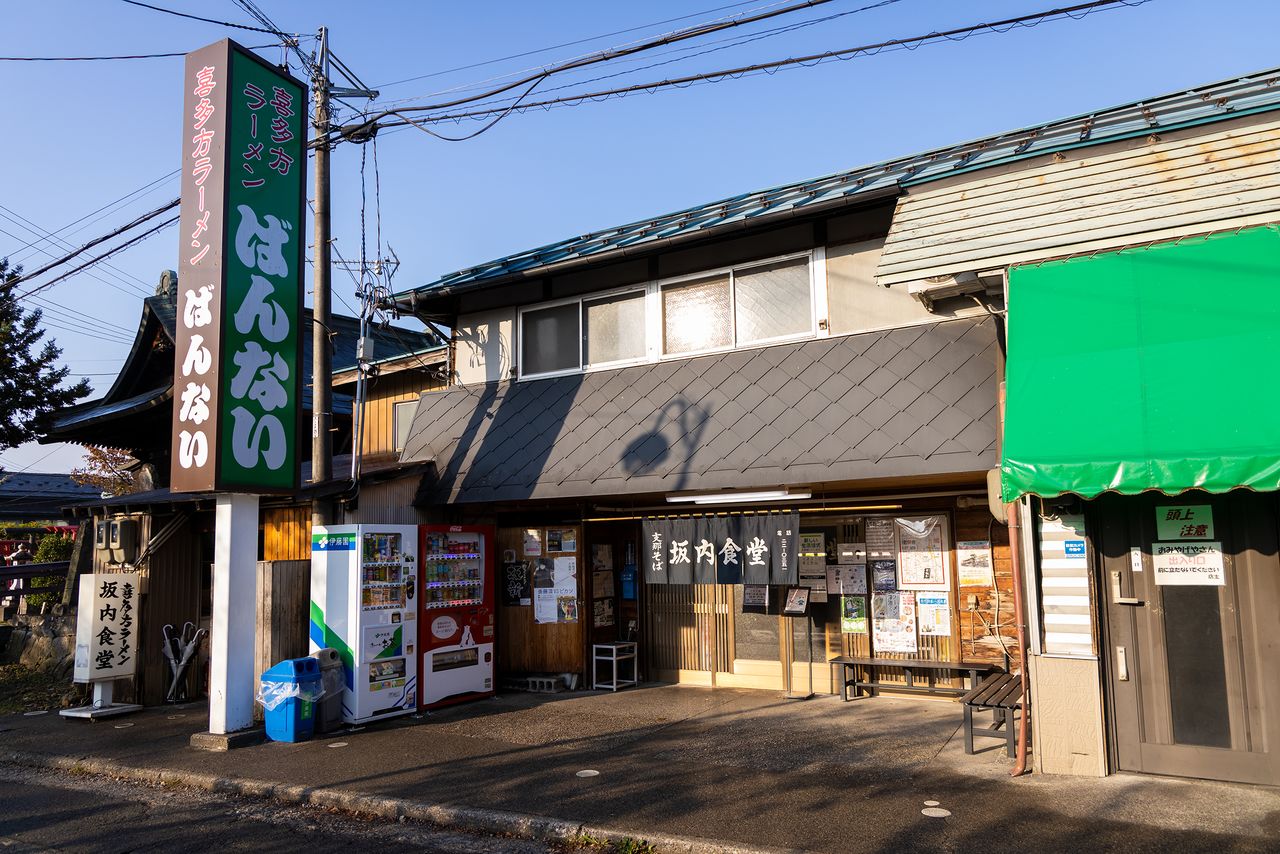 Bannai Shokudō, located on the other side of the Kitakata city office from Makoto Shokudō.

Bannai Shingo opened Bannai Shokudō in 1958. The salty soup served here is pork-bone-based, and the chāshū is simmered with a touch of soy sauce. The umami from the salt and the broth is robust, but the soup’s light flavor makes it a perfect match for the chāshū topping and the chewy noodles.

Bannai established the chain Kitakata Ramen Bannai in 1988, a franchising operation run by the firm Menshoku. It has over 60 branches in Japan, mainly in the Tokyo area, and also in the United States, that have spread the name and the taste of Kitakata ramen far and wide. 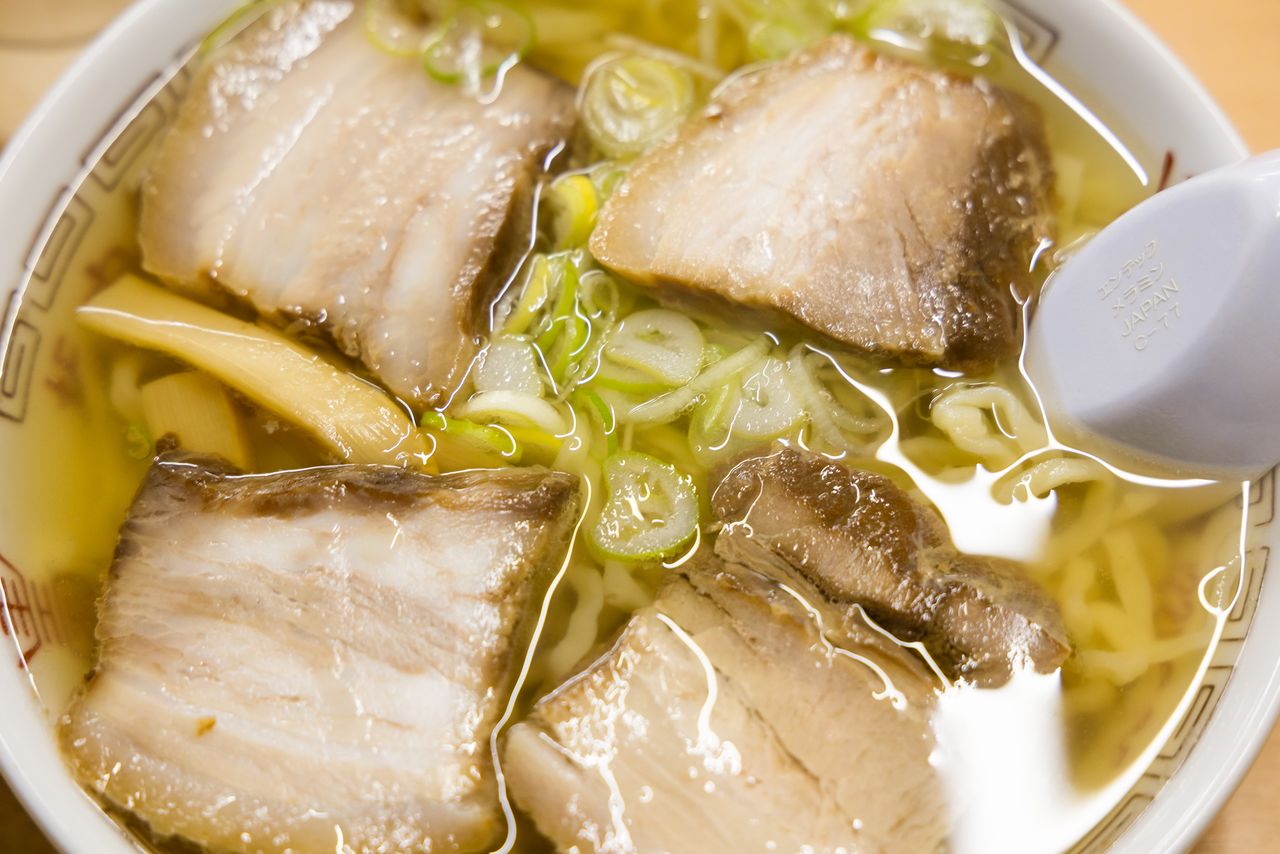 The golden salty soup at Bannai Shokudō is a main attraction for diners, many of whom come to Kitakata especially for its ramen.

Both Bannai Shokudō and Makoto Shokudō open at 7:00 am, by which time customers are already lined up outside.

Bannai Shōichi says, “Regulars see the shop lit up at dawn when we’re making the day’s preparations and I’m getting my children’s lunches ready, and they’ll poke their heads in the door and ask ‘Are you open yet?’ or ‘Are you ready to serve?’” Some customers are people who come for a bowl of noodles when they’re getting off a night shift at a factory, or farm workers who want to eat before starting work in the fields. It seems that the custom of having early morning ramen just sprang up naturally. 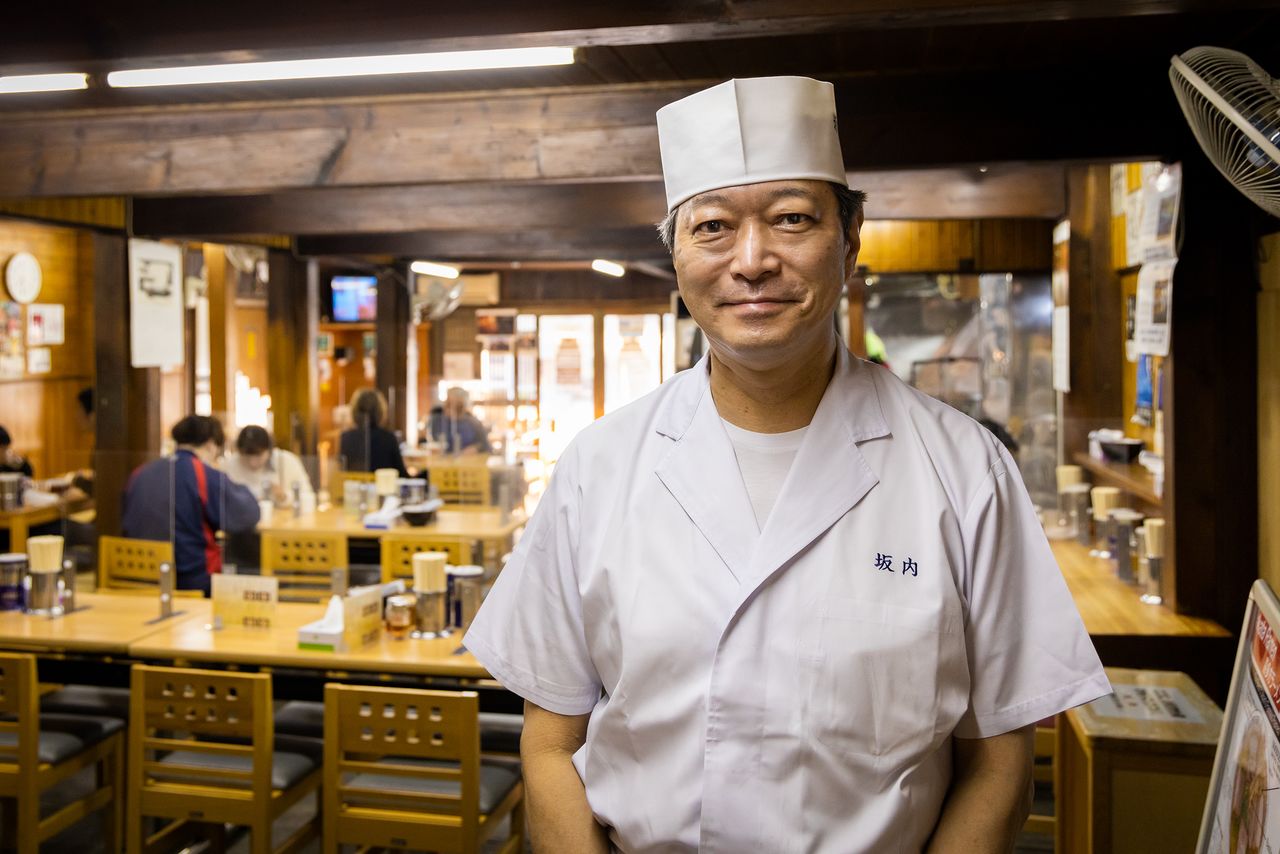 Kitakata ramen became a household name in Japan thanks mainly to Kitakata’s history and culture, not to mention the character of the local people.

Kitakata got its name because it was situated in the northern (kita) part of the Edo-period (1603–1868) Aizu domain. Kitakata people were entrepreneurs, and many of them set up businesses making sake, soy sauce, or miso. These are fermented products that rely on good water, so they took advantage of the clear streams flowing from nearby Mount Iide. Good water produces fine-tasting sake and soy sauce, and Kitakata noodles, high in water content, also made good use of this resource.

Another reason for the existence of Kitakata ramen is the presence of local soy sauce brewers. Ramen eatery operators are quite particular about the soy sauce they use, which influences the flavor of the soup and the chāshū they serve. It is also easy for them to order soy sauce made to their specifications. That gives ramen shops their distinctive taste—and is why so many of them can flourish in Kitakata. 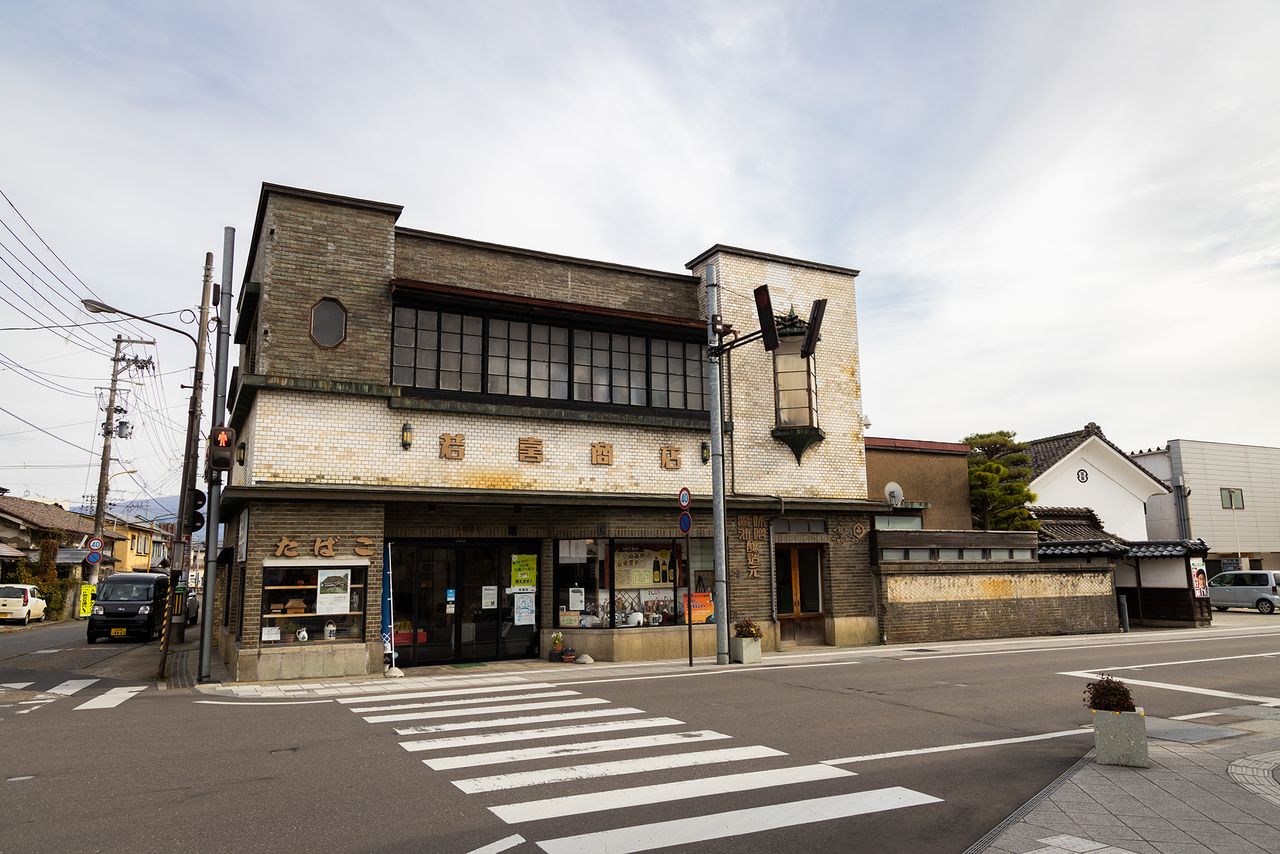 Wakaki Shōten, famous for its soy sauce and miso, stands on Retro Shopping Street. Its brick storehouse and tatami-mat sitting room are open to the public. 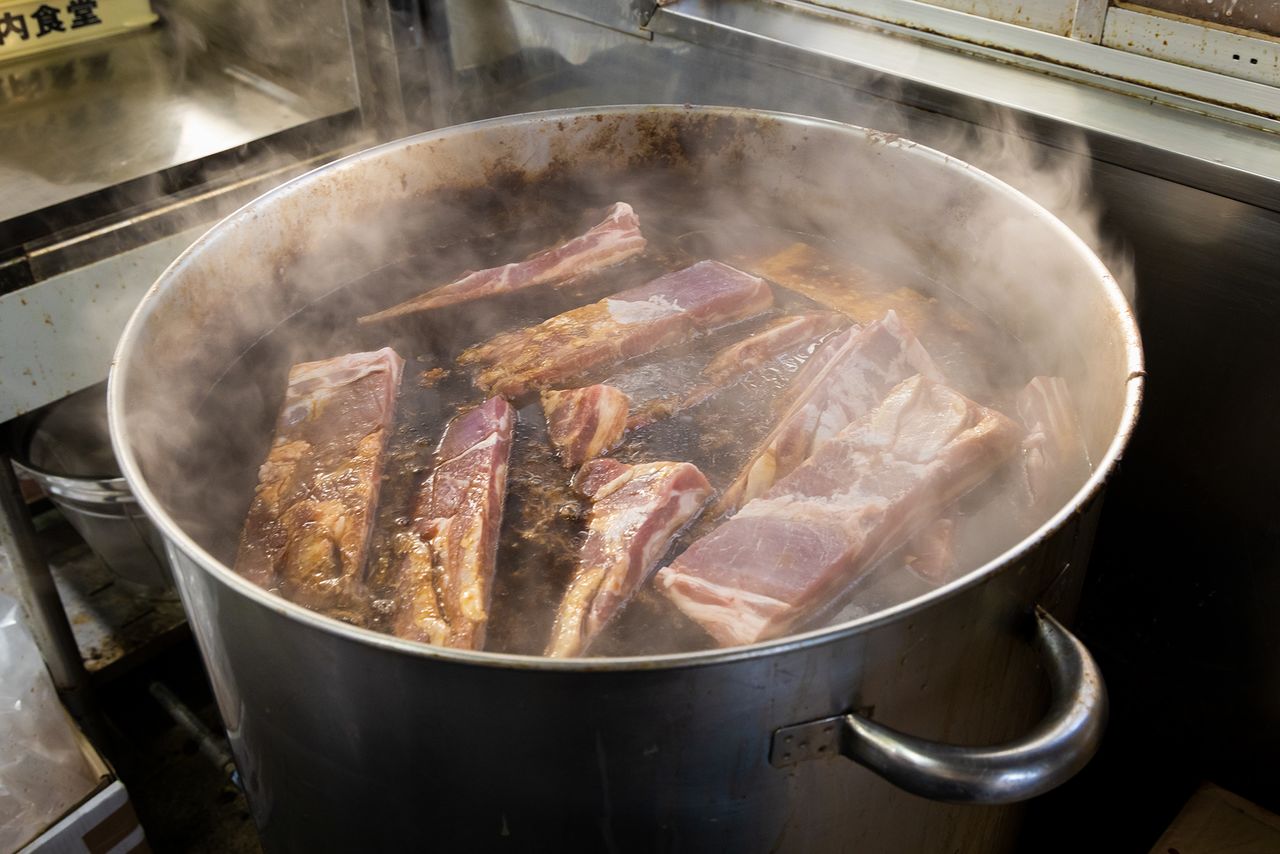 A City of Storehouses and Noodles

Prior to the ramen boom, Kitakata became a tourism destination in the 1970s, notable for its profusion of traditional kura storehouses.

Television coverage and photo exhibitions featuring Kitakata’s many kura, used by sake and soy sauce brewers, sparked interest in the city and gradually attracted tourists. In a bid to encourage them to linger, the city’s commerce and tourism department organized a tie-up with a tourism magazine in 1983 that began featuring popular local ramen shops.

Media interest intensified as a result, and a tourism boom was on. Coincidentally, Bannai Shokudō started up its Kitakata Ramen Bannai chain around the same time, which helped put the city’s name on the map. 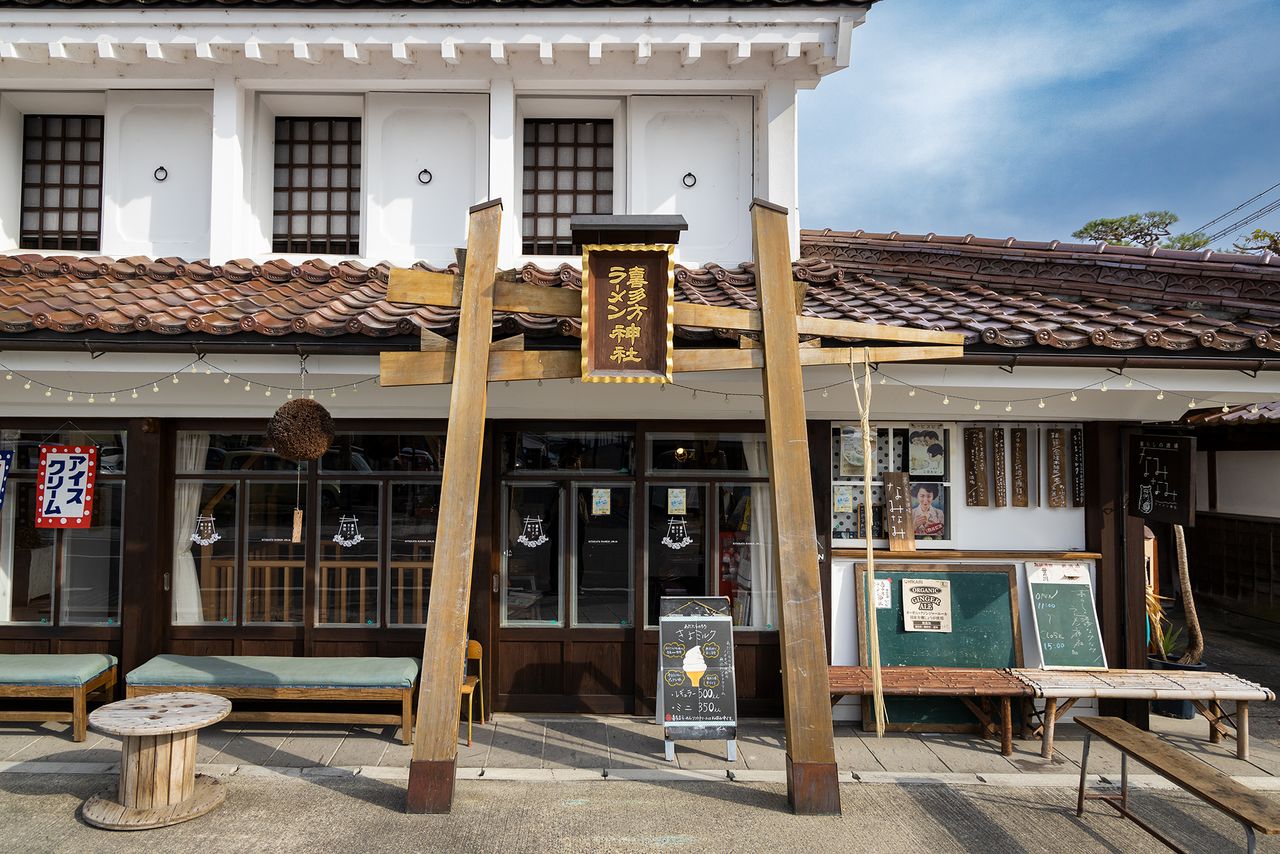 The Kitakata Ramen Jinja, a shrine dedicated to the city’s ramen, is on the Retro Shopping Street.

With so many people flocking to Kitakata for its ramen, the Ramenkai, an association of ramen-related businesses, also played a major role in branding the city. This group started up in 1987 with 40 ramen eateries and 5 noodle makers as members. A “ramen map” showing the location of member stores proved very popular and set off a fad among visitors, who enjoyed making the rounds of the eateries on the circuit. 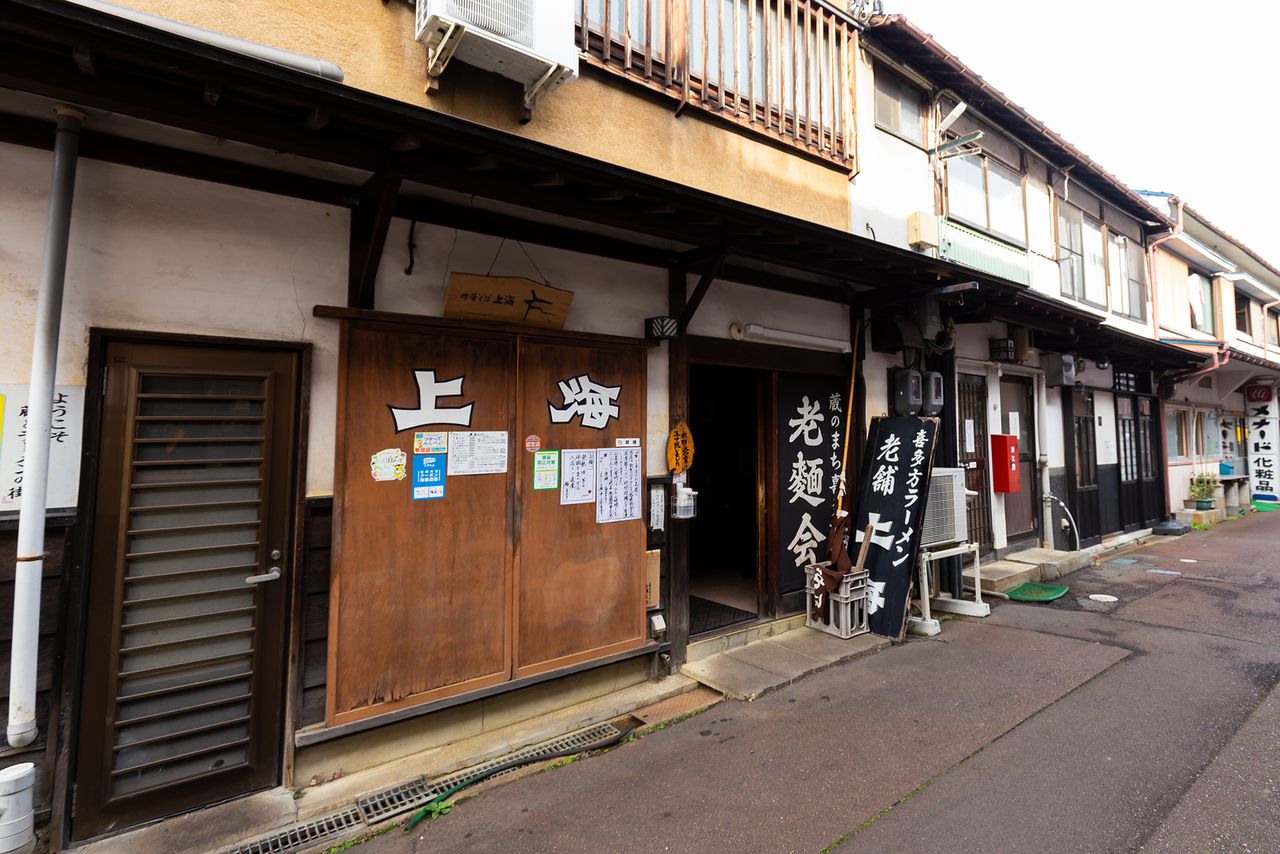 But the boom that brought so many visitors to Kitakata appears to have led some shops to cut corners, prompting local regulars to gripe that “the soup tastes watery,” “the broth is lukewarm,” or “the noodles have gone soggy.” The Ramenkai urged its members to uphold quality standards, for example by closing up early if they ran out of soup or noodles, and to improve sanitation standards.

Thanks to the Ramenkai’s efforts, the Kitakata brand has been protected and its lasting popularity ensured, much to the delight of ramen fans. 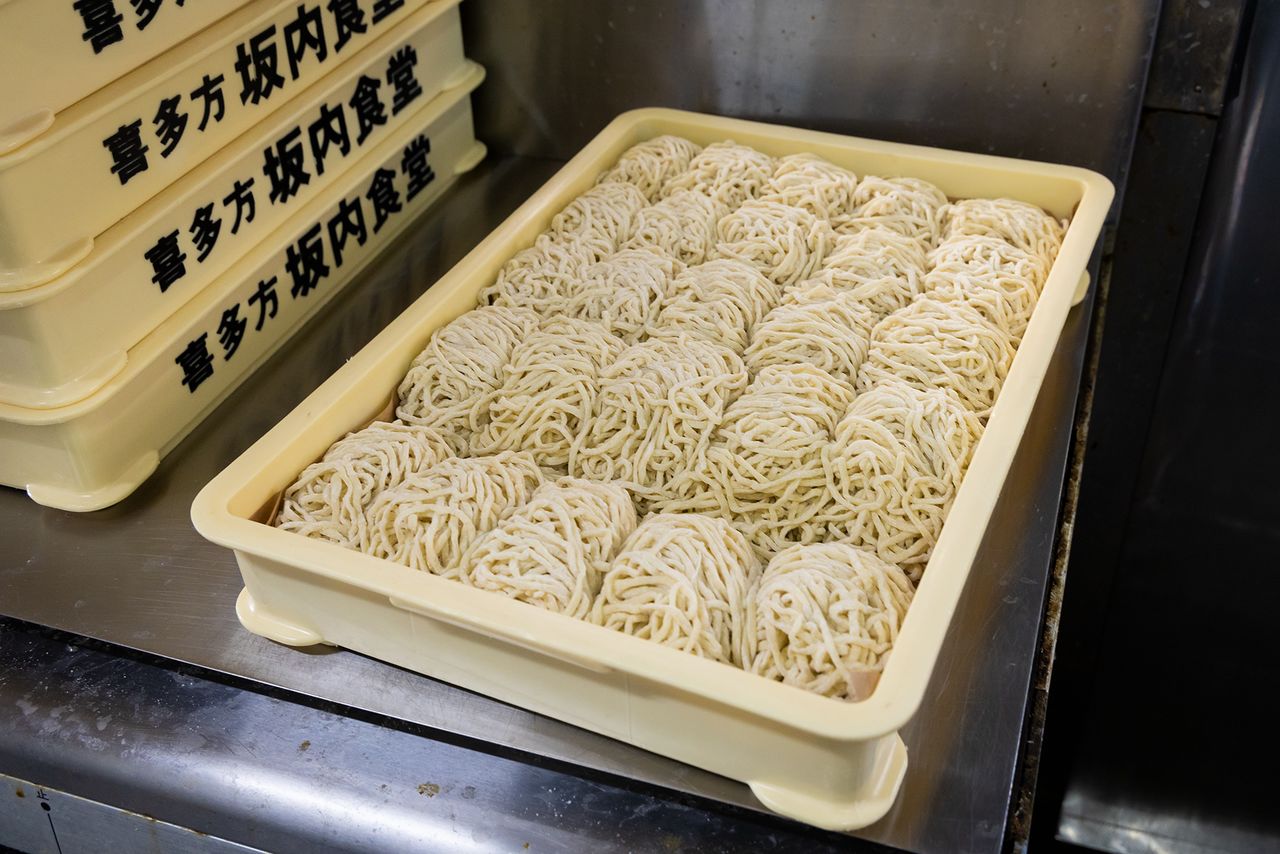 Kitakata ramen was born thanks to Ban Kinsei, who developed a flat noodle with a high water content.

(Originally published in Japanese. Reporting, text, and photos by Nippon.com. This article was prepared with the cooperation of the Kitakata Tourism and Products Association.)