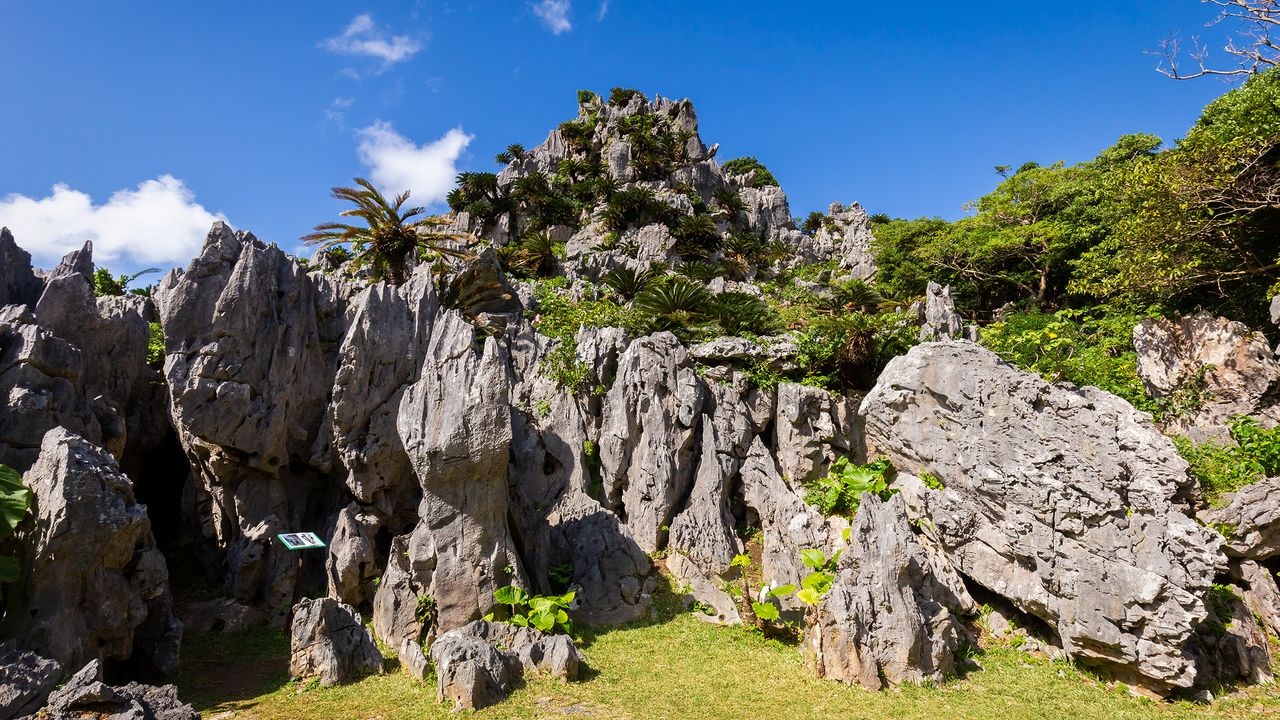 Travel Jan 28, 2022
Okinawa Prefecture has long attracted interest in its history, customs, and distinctive culture, and today, the northern part of the island, recently registered as a UNESCO natural heritage site, is the focus of special attention. Yanbaru, as the region is known, features several points of interest, including Daisekirinzan and Cape Hedo.

Daisekirinzan: A Taste of Nature in Northern Okinawa

The northern part of the island of Okinawa, a region known as Yanbaru, is a rich nature preserve. Much of it is taken up by a national park containing some of Japan’s most extensive evergreen broad-leaved forests. It is also the home of the Yanbarukuina, or Okinawa rail, along with many other endemic plant and animal species. In July 2021, it was inscribed together with Amami-Ōshima, Tokunoshima, and Iriomote as a UNESCO natural heritage site critical for preserving biodiversity.

Okinawa’s main tourist spots lie mainly in the island’s south, centering on the prefectural capital of Naha, while resort hotels are clustered on the western coast of the central part of the island. Up to now, the farthest north that visitors usually ventured was the area around the Churaumi Aquarium. Further to the north are the less familiar districts of Kunigami, Higashi, Ōgimi, and Yanbaru National Park.

The park covers a huge area. A recommended jumping-off point is Daisekirinzan in the Kunigami district at the northern tip of the island. The area features rugged limestone cliffs offering dramatic views. Visitors can also follow walking trails through stands of giant Chinese banyan to enjoy nature up close. 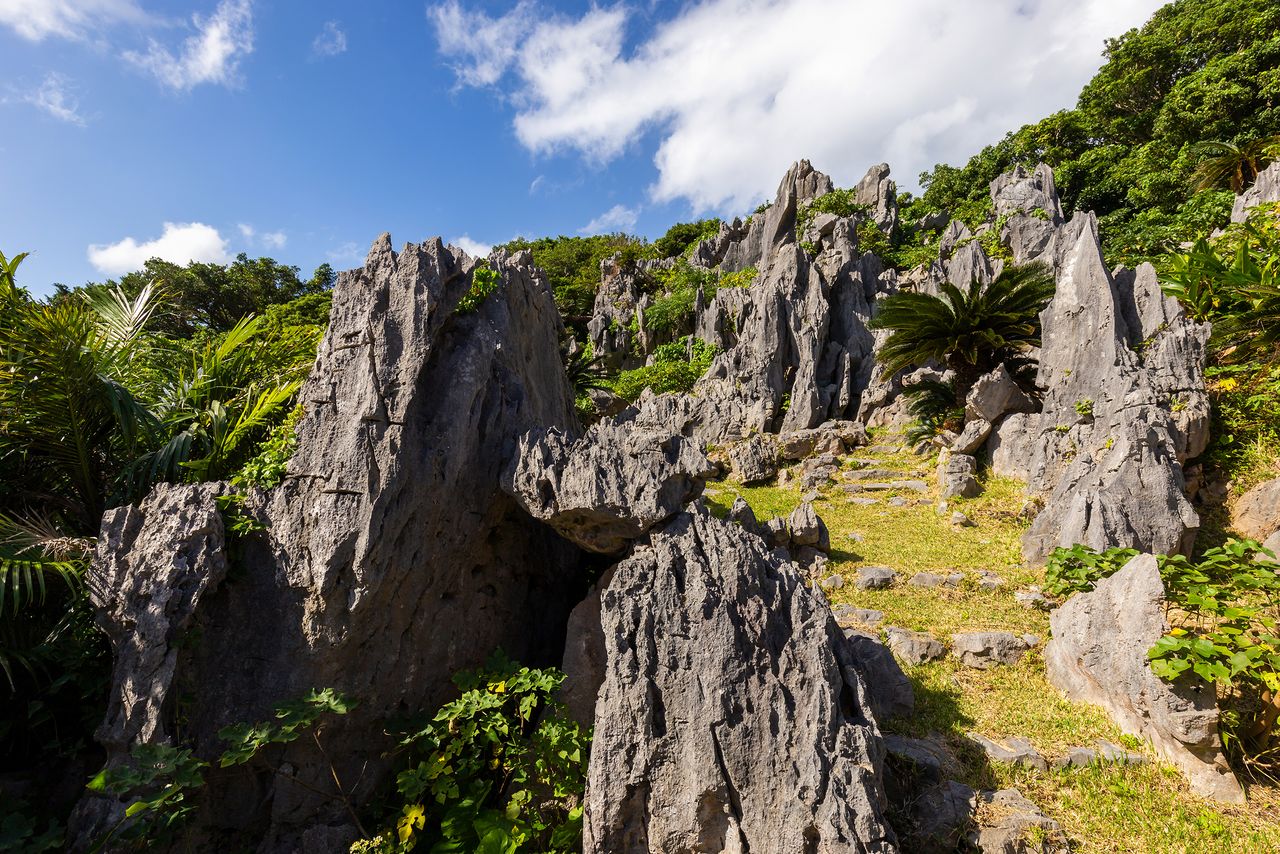 Huge rocks are a feature of the Yanbaru landscape. The region is the world’s northernmost limit for subtropical karst topography. 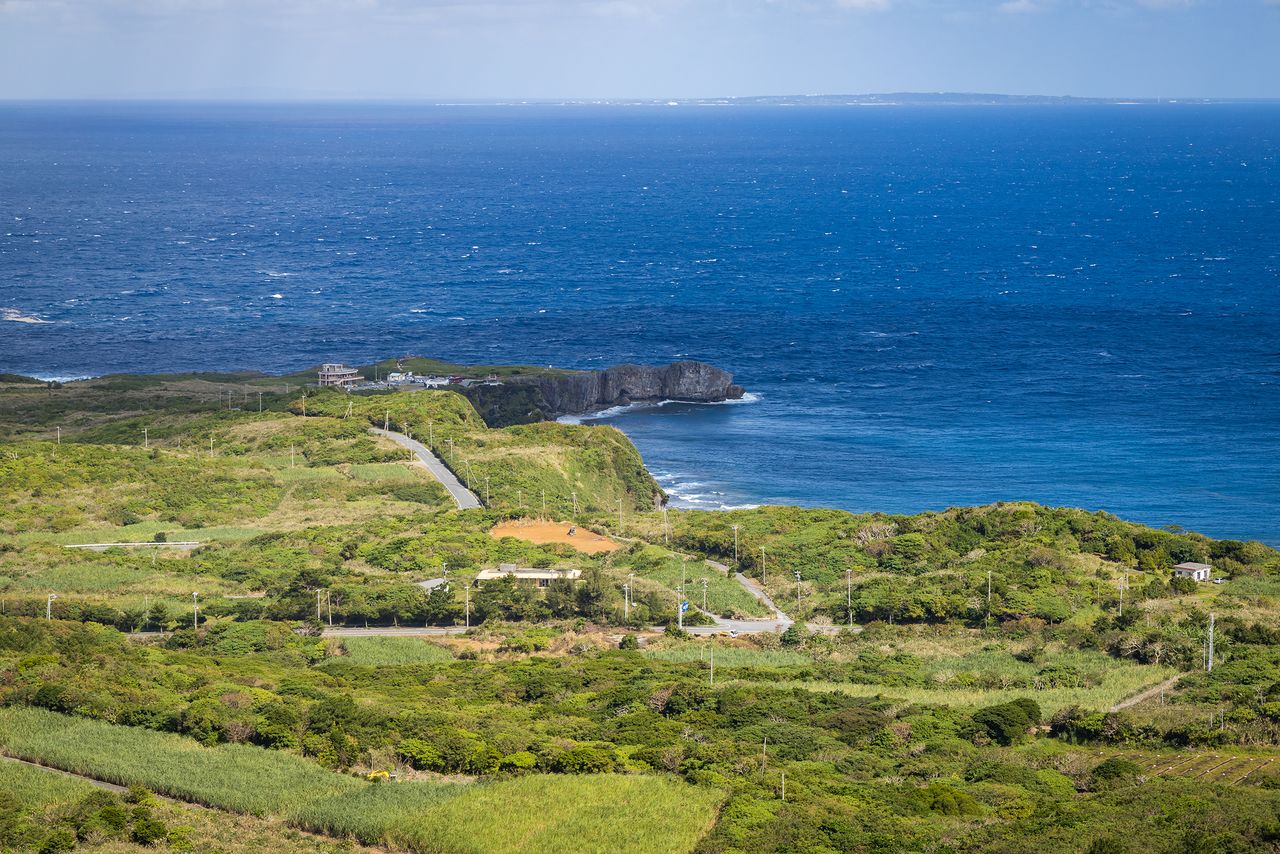 Cape Hedo viewed from the Churaumi Lookout at Daisekirinzan. Yoron Island is faintly visible in the distance to the right.

Daisekirinzan is near Mount Hedo and Cape Hedo at the northernmost tip of the island. Crustal movements 250 million years ago pushed limestone up from the ocean floor. Later wind and rain erosion left jagged promontories in the middle of the forests, creating dramatic landscapes.

Mount Hedo was one of the first places designated as ashimui (sacred ground) by Amamikiyo, a Ryūkyū ancestor deity. Today, over 50 such places of worship remain on the mountain, lending a mystical air that extends to Daisekirinzan. 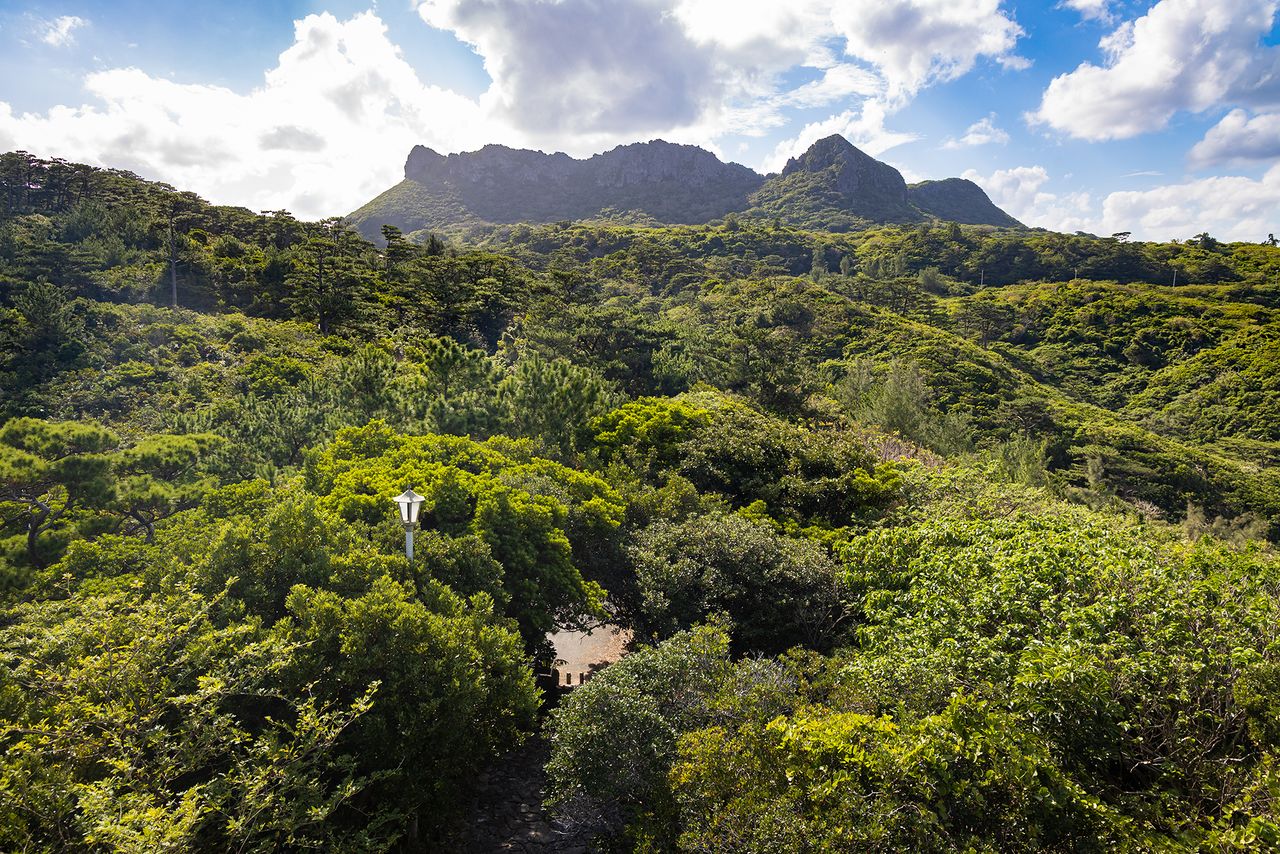 A view of the four peaks of ashimui from the Yanbarukuina Lookout. The taller peak on the right is Mount Iheya, behind which lies Daisekirinzan.

Daisekirinzan has four walking trails. All start at the Seikigoya rest area, which is easily reached by one of the shuttle buses departing from the Yanbaru National Park ticket office.

The wheelchair-accessible trail, measuring 600 meters, is the shortest and takes about 20 minutes to cover. The route, paved or covered in wooden decking, offers close-up views of the area’s rock formations and is ideal for seniors or families with young children. 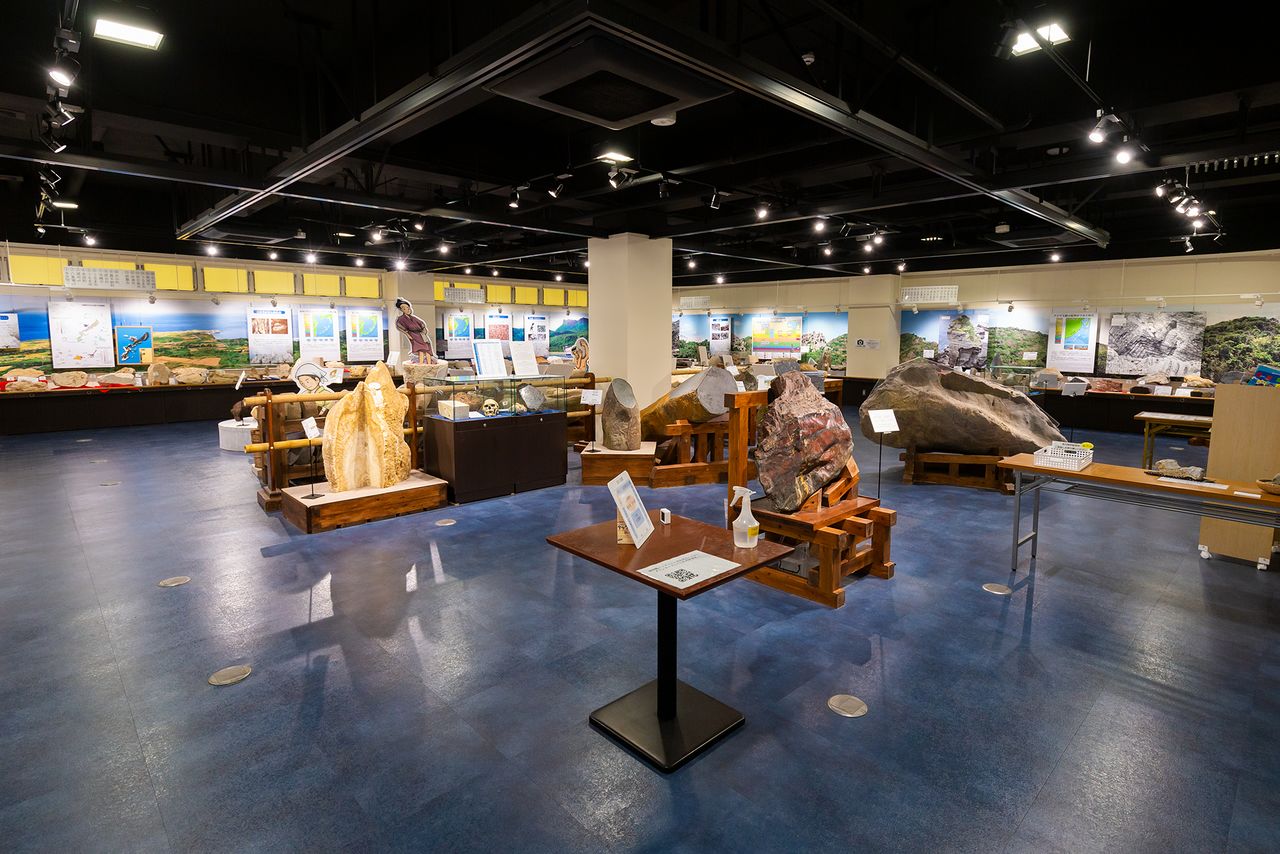 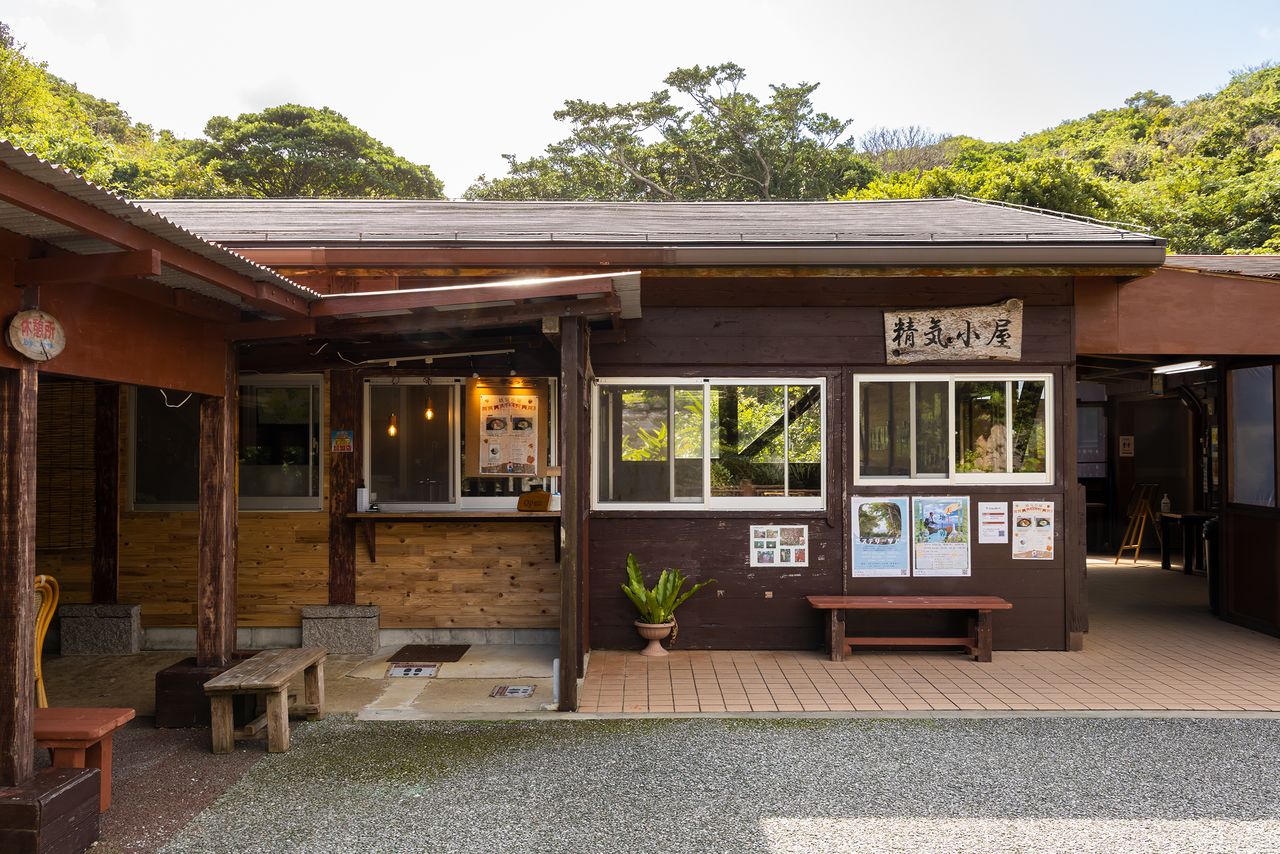 All trails start at the Seikigoya hut, a rest spot where food and beverages are available. 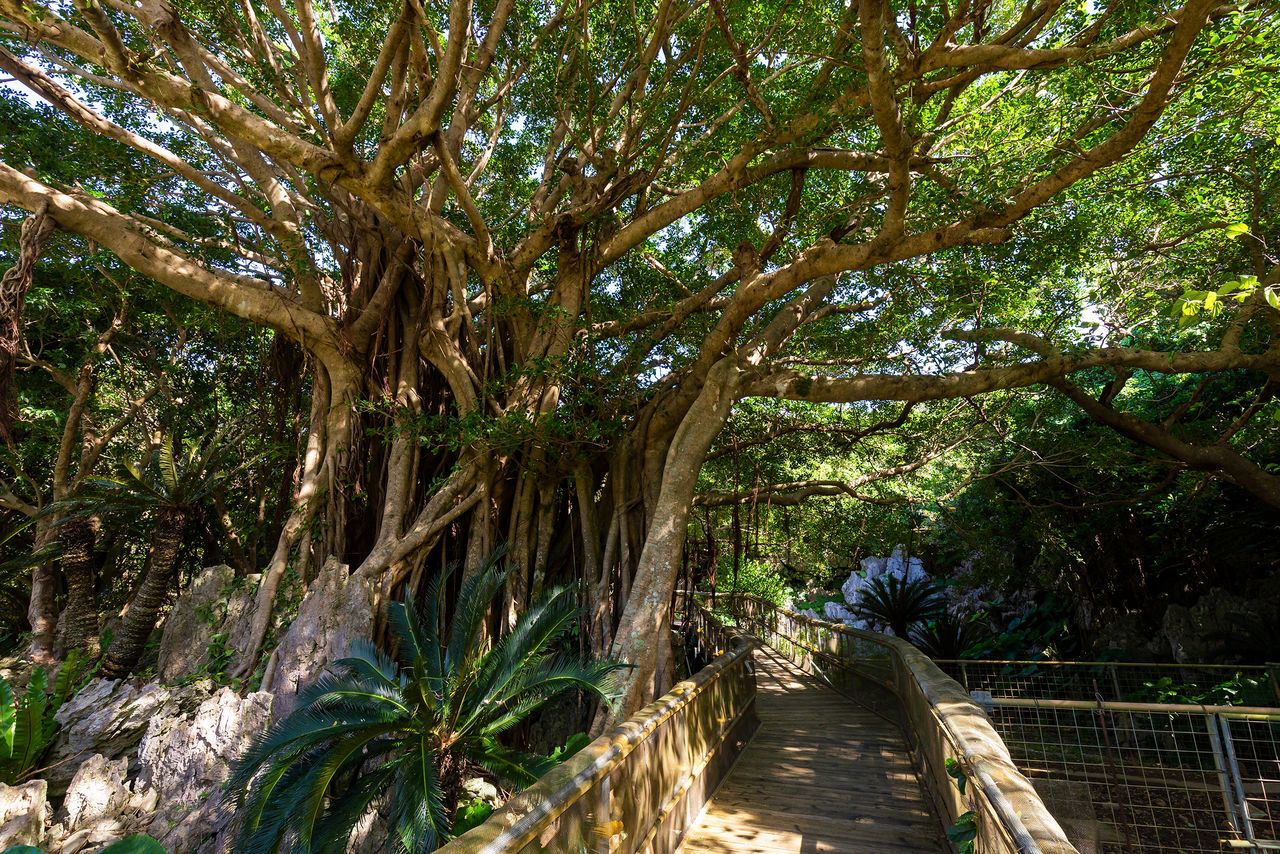 Chinese banyan and other subtropical vegetation can also be viewed up close on the wheelchair-accessible trail. 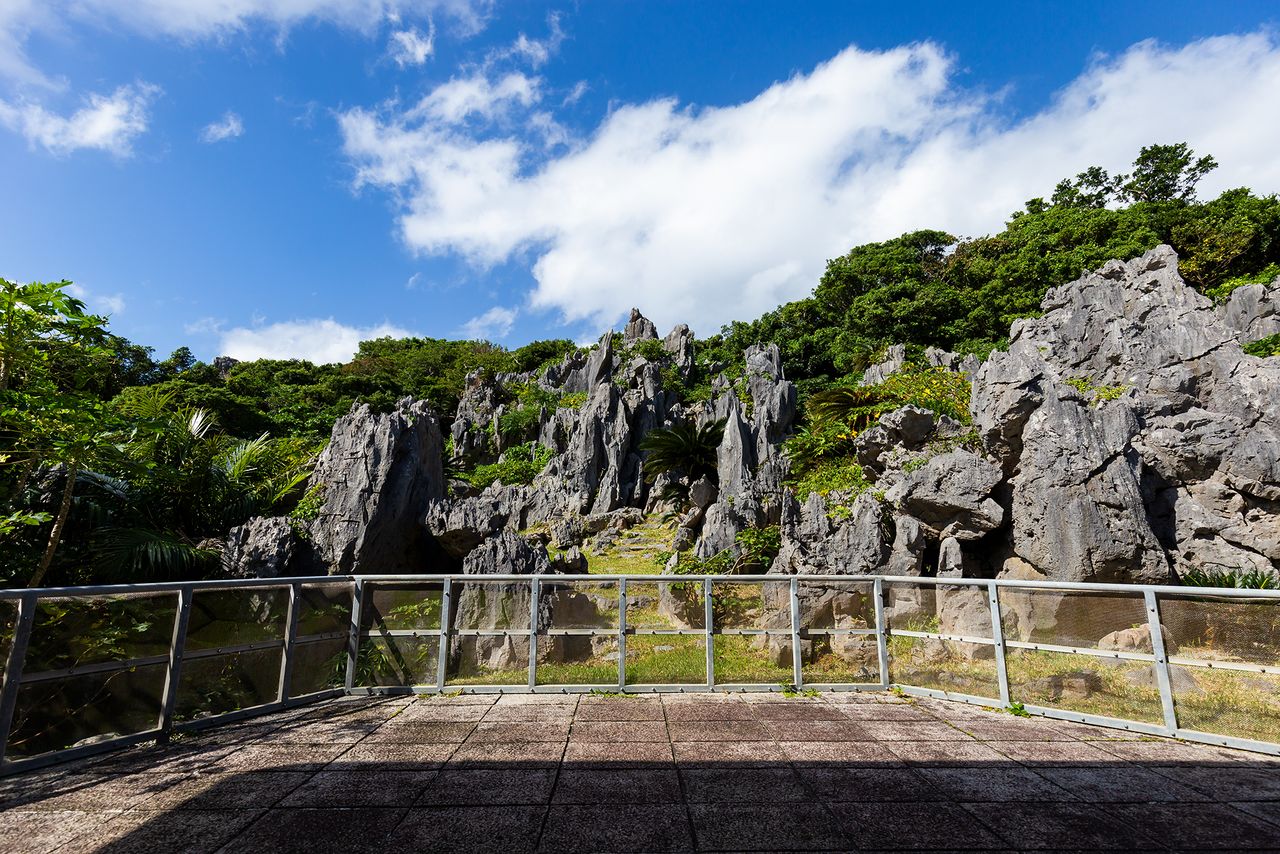 Visitors get a close-up look at fantastical rock formations from the observation deck.

The most popular route, combining the Wonder of Rocks and the Churaumi Ocean View Trails, enables trekkers to take in the clear blue sea and Cape Hedo. These trails, along with the wheelchair-accessible trail, end at Seikigoya, from where visitors can board a shuttle bus back to the ticket office. Travelers who want to see more can return to the ticket office on foot along the one-kilometer-long Subtropical Forest Trail. 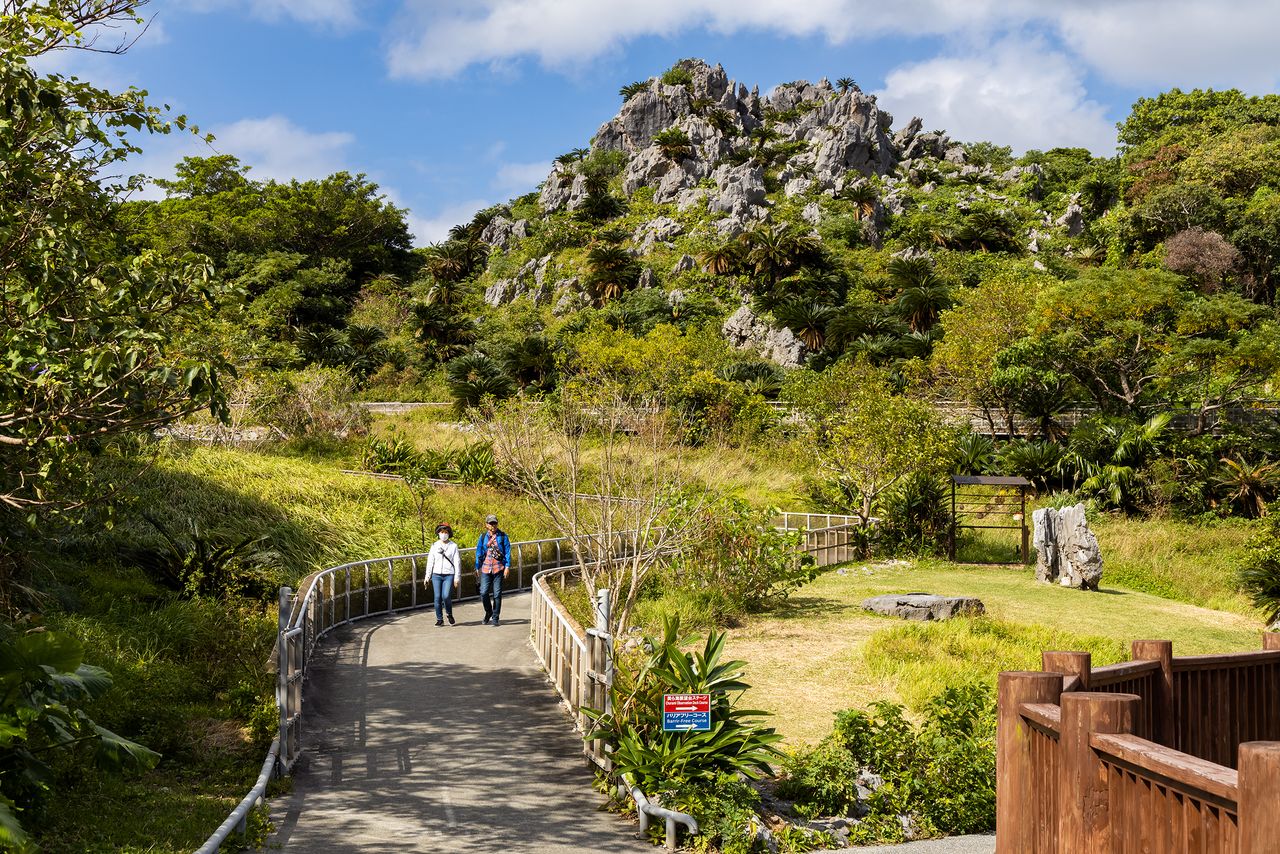 The final stretches of the Wonder of Rocks and the Churaumi Ocean View Trails converge at the wheelchair-accessible trail. All three end at Seikigoya. 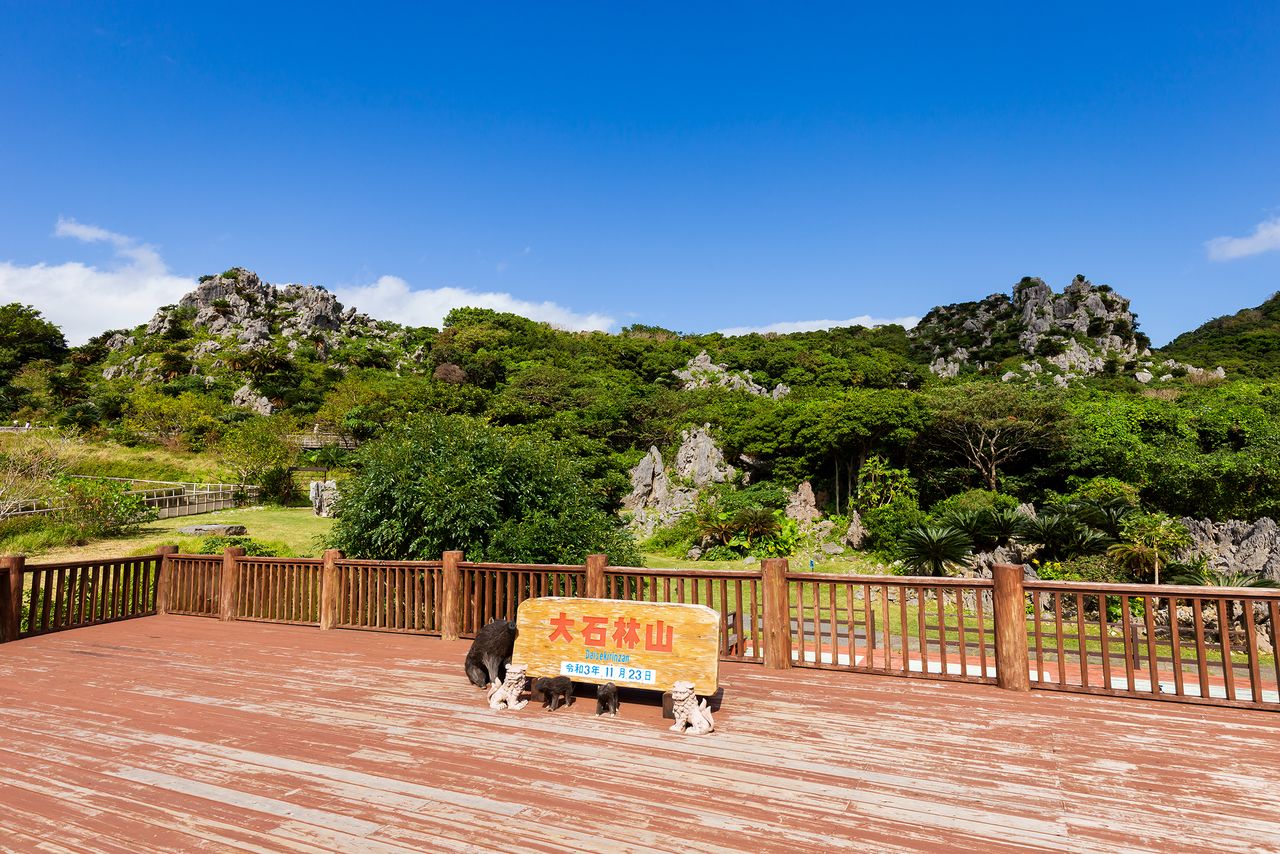 Along the Wonder of Rocks Trail, visitors encounter huge, strange-shaped boulders and the enmusubi rock, which promises luck in love. The Subtropical Forest Trail, a 35-minute trek, takes walkers through forested areas of Yanbaru. 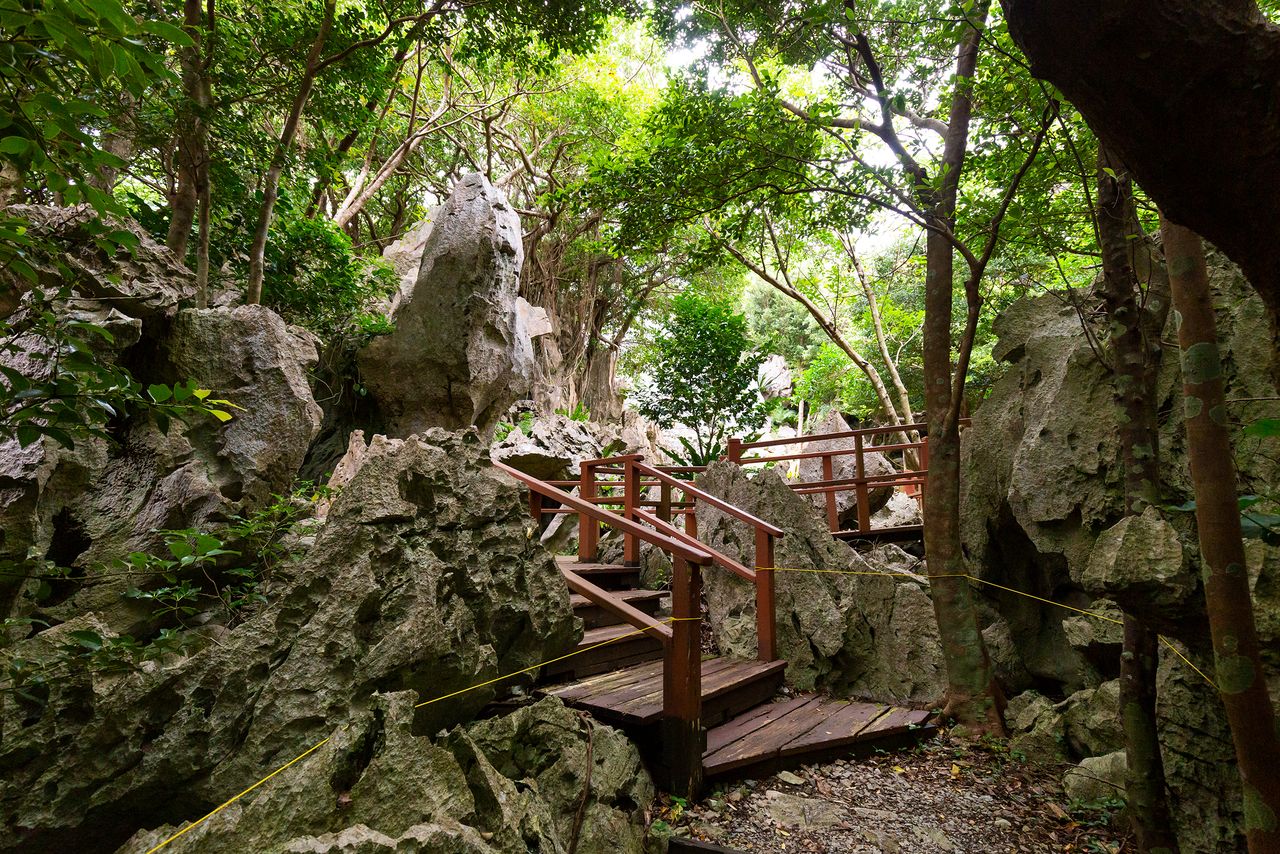 On the Wonder of Rocks Trail, visitors can view karst rock formations. 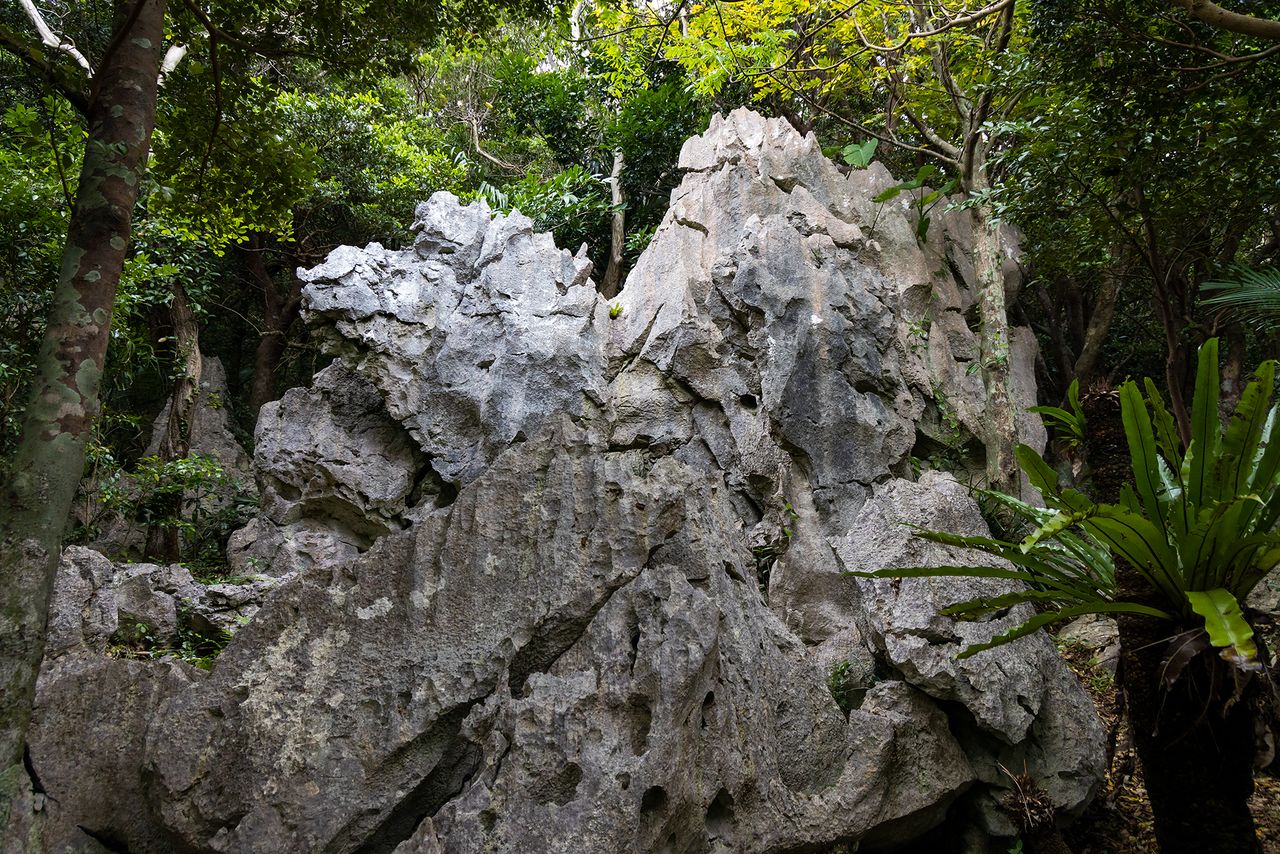 Many of the boulders resemble animals, such as this camel-like rock. 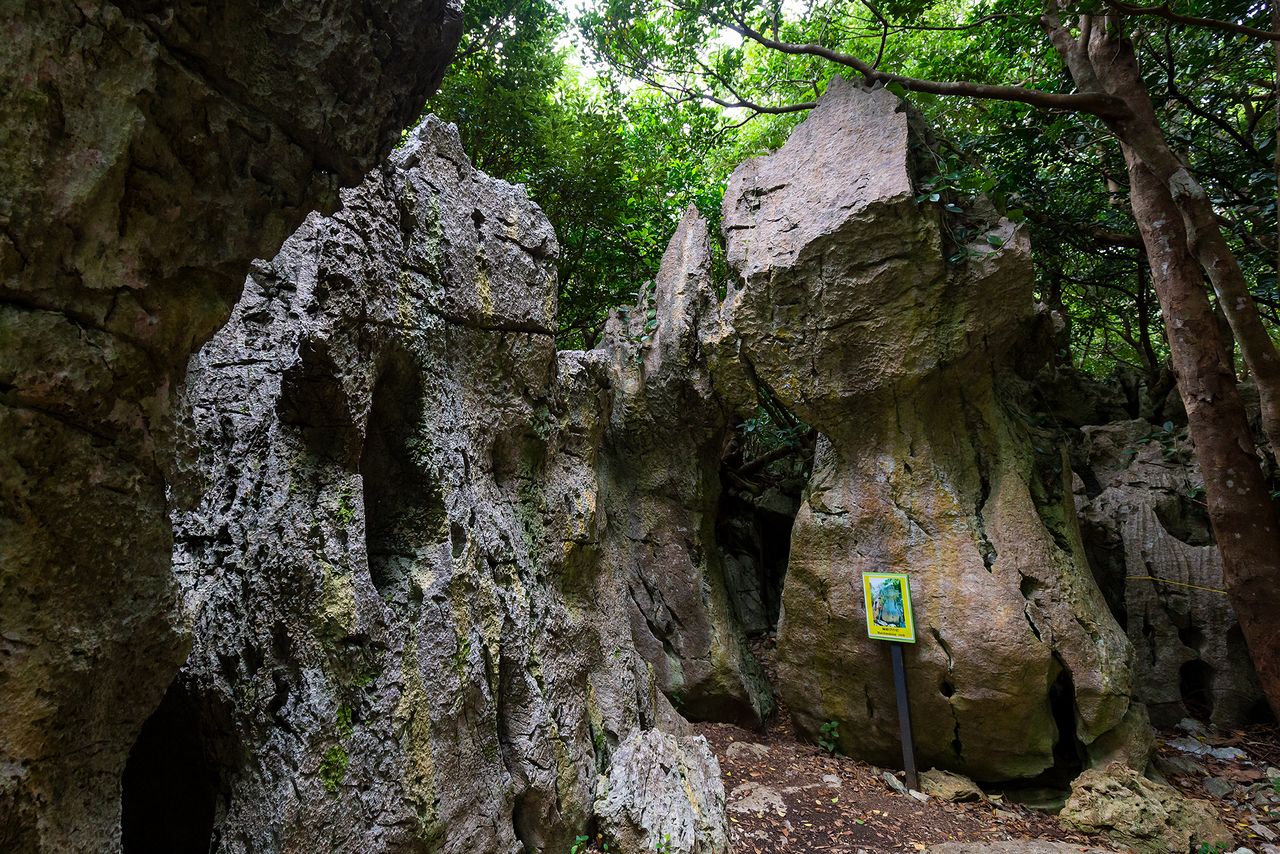 Daisekirinzan is also known for its spiritual atmosphere. To the right is the enmusubi rock.

Gokūiwa, symbol of Daisekirinzan, appears at the end of the forest road on the Wonder of Rocks Trail. This monolith takes its name from its resemblance to Mount Huaguo, birthplace of the mythical Monkey King, one of the main characters in the sixteenth-century Chinese novel Journey to the West. This trail continues along the ridge, eventually merging with the Churaumi Ocean View Trail. 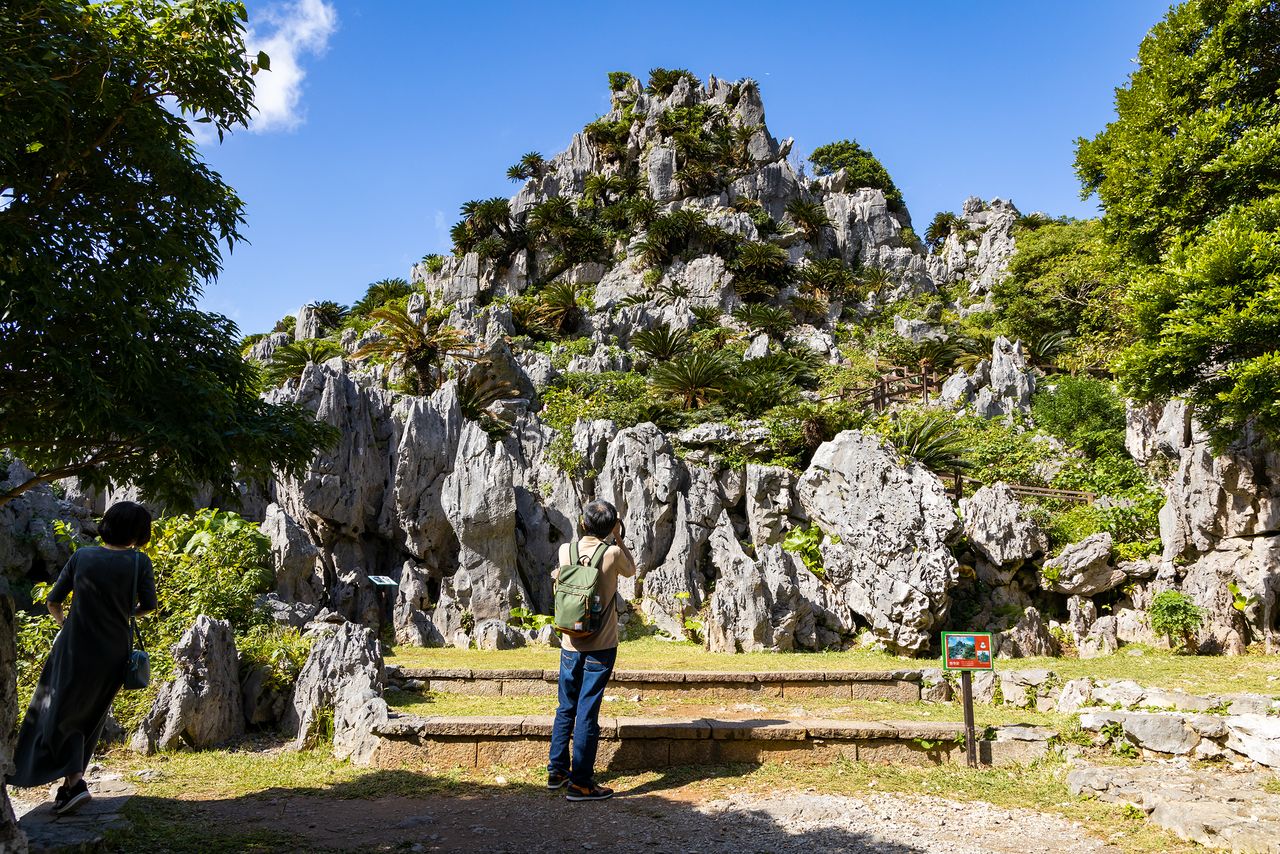 Gokūiwa at its most photogenic. 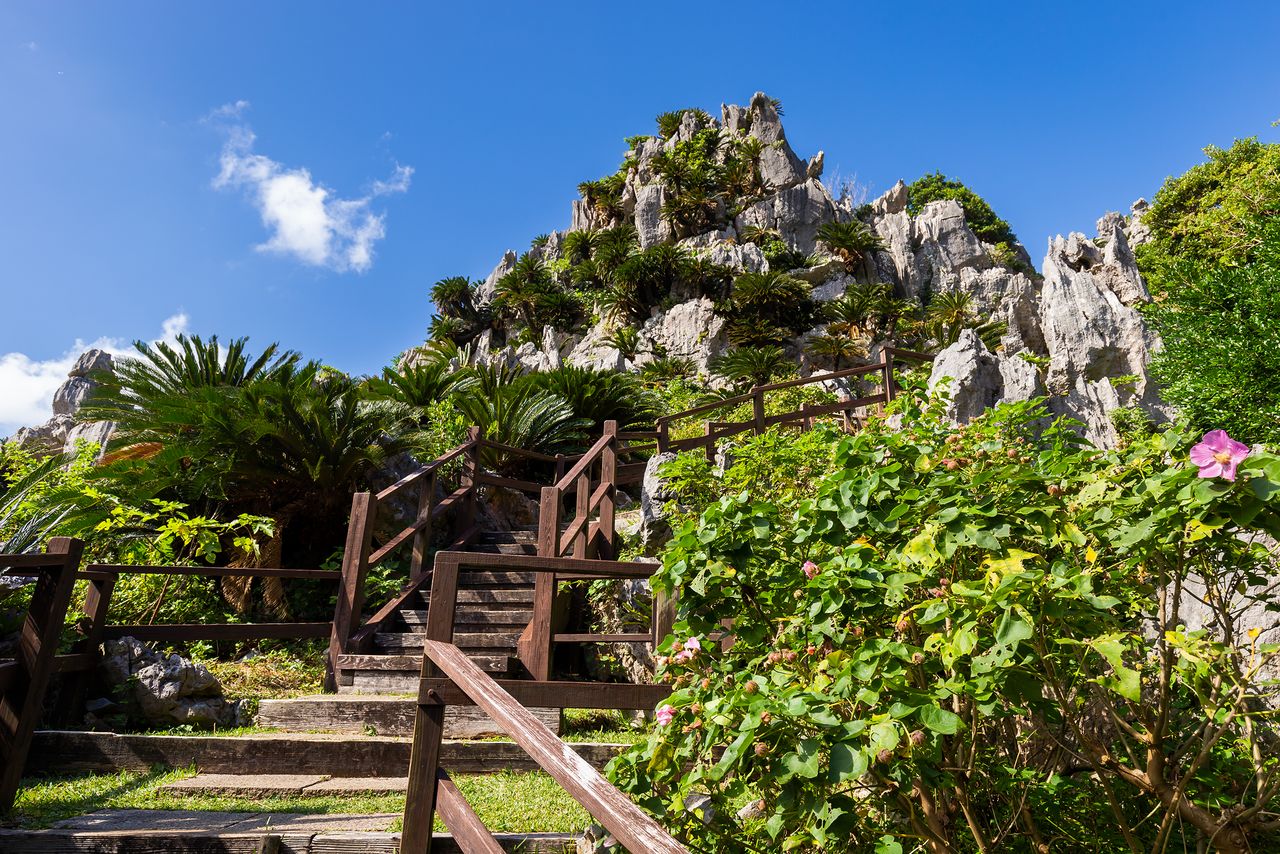 The stairs by Gokūiwa take visitors to the Churaumi Lookout.

Walking the 900-meter-long Churaumi Ocean View Trail takes about half an hour. Part of the path overlaps with the Wonder of Rocks Trail, and together the two take about 50 minutes to complete.

Past Gokūiwa are the Stone Forest Wall, the Dragon King Rock, and other places of worship. Many devotional spots are concealed between the rocks and are easy to pass by unobserved. The Churaumi Lookout atop of the trail overlooks the beautiful blue sea and Cape Hedo, and on clear days it is possible to see as far as Yoron Island 23 kilometers across the water. 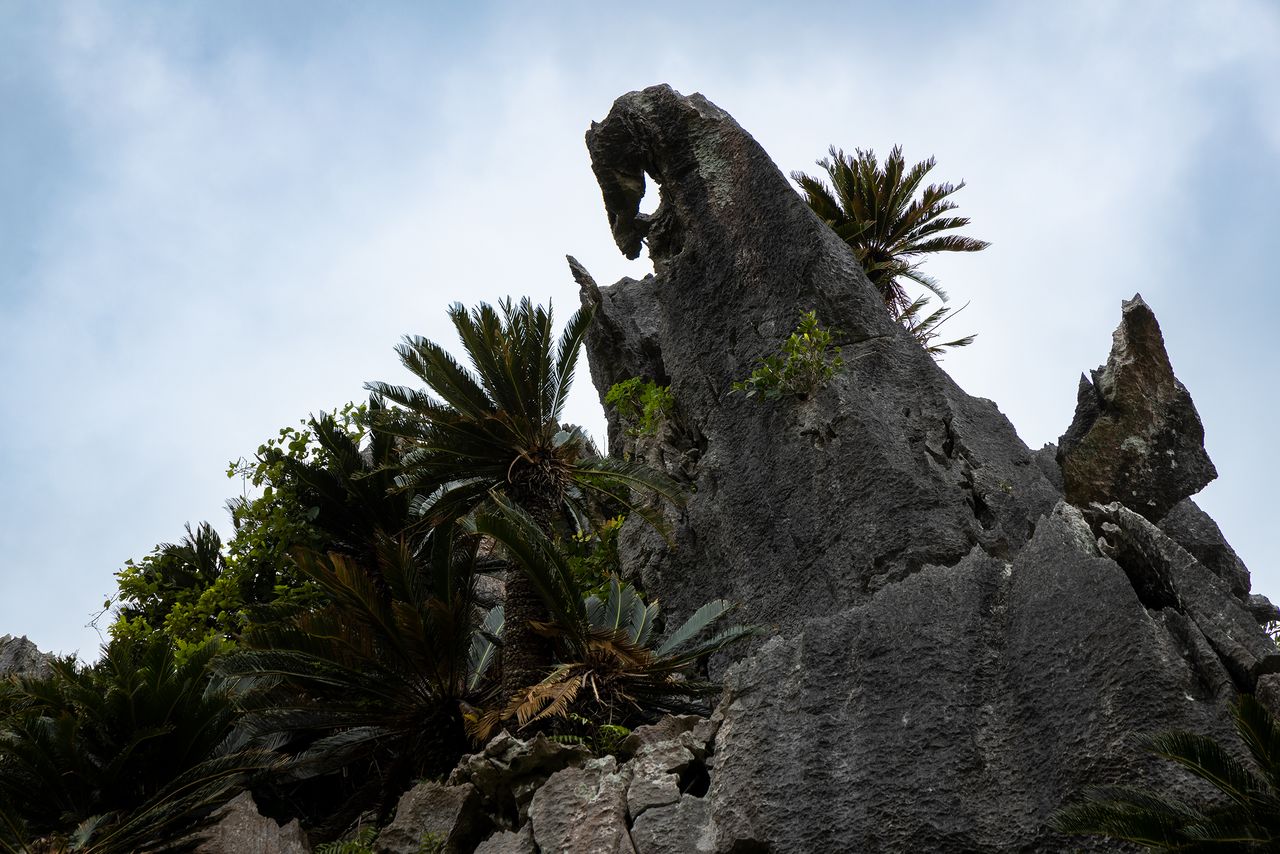 The Dragon King Rock atop Gokūiwa has been venerated through the ages. 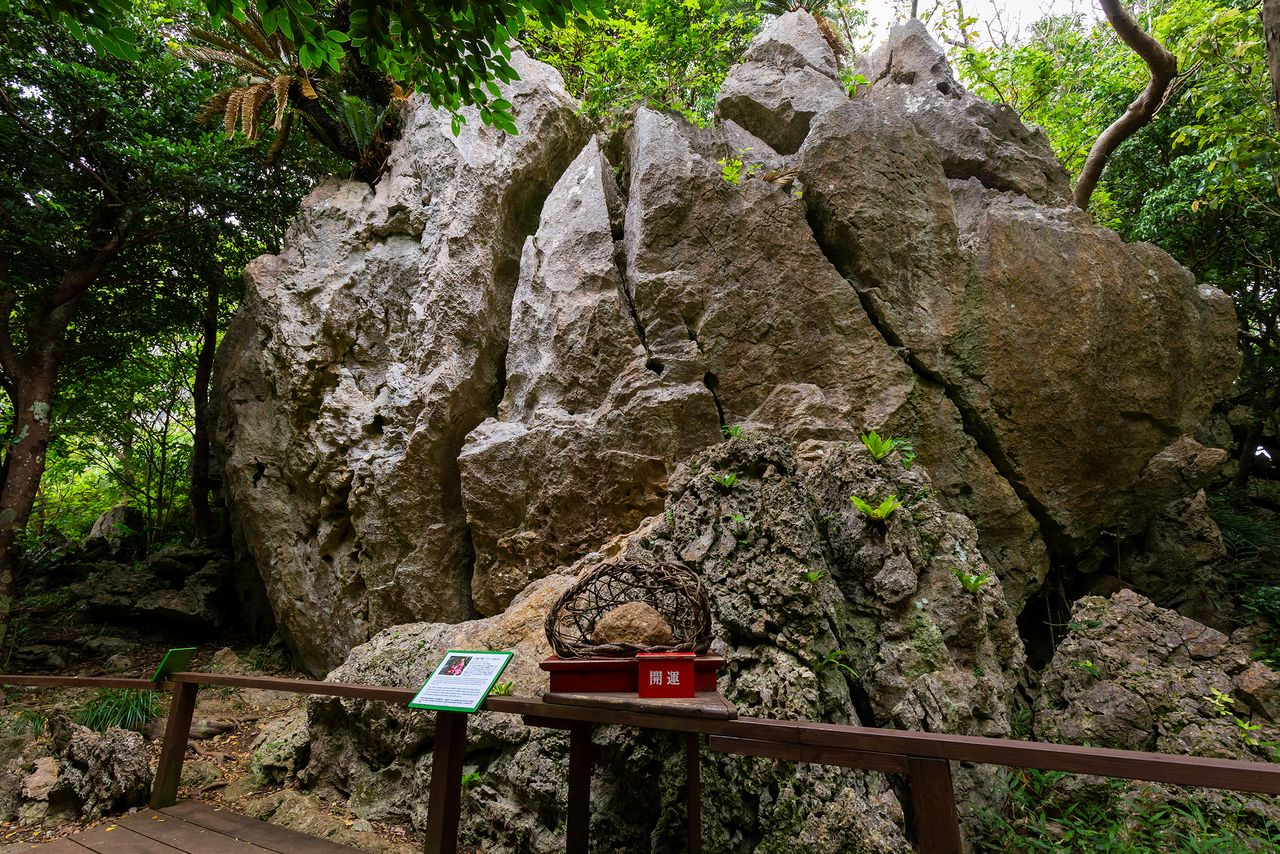 The Stone Forest Wall is reputed to have the most powerful spiritual presence. It looks especially awe-inspiring in the morning sun. 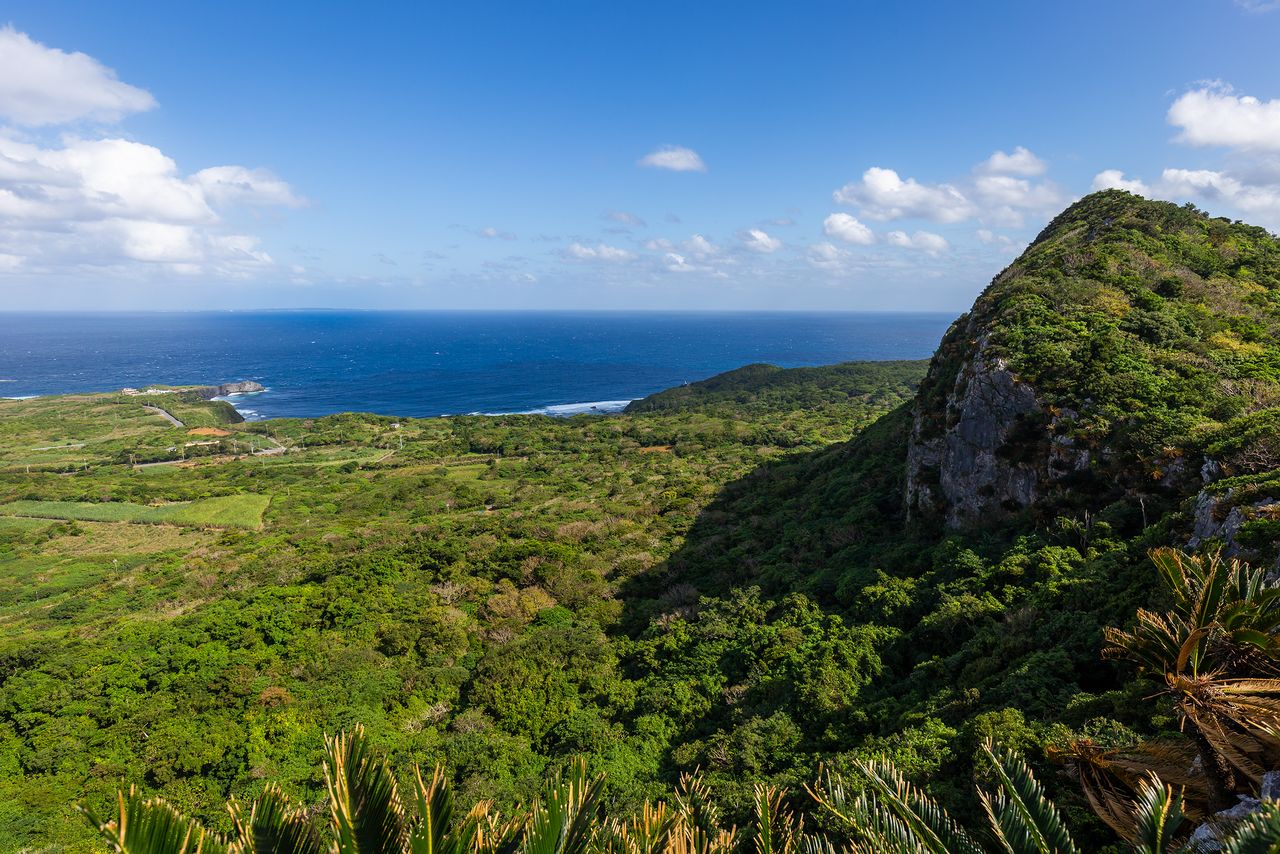 The view from the Churaumi Lookout. The promontory on the right is Mount Iheya, with Cape Hedo in the distance. 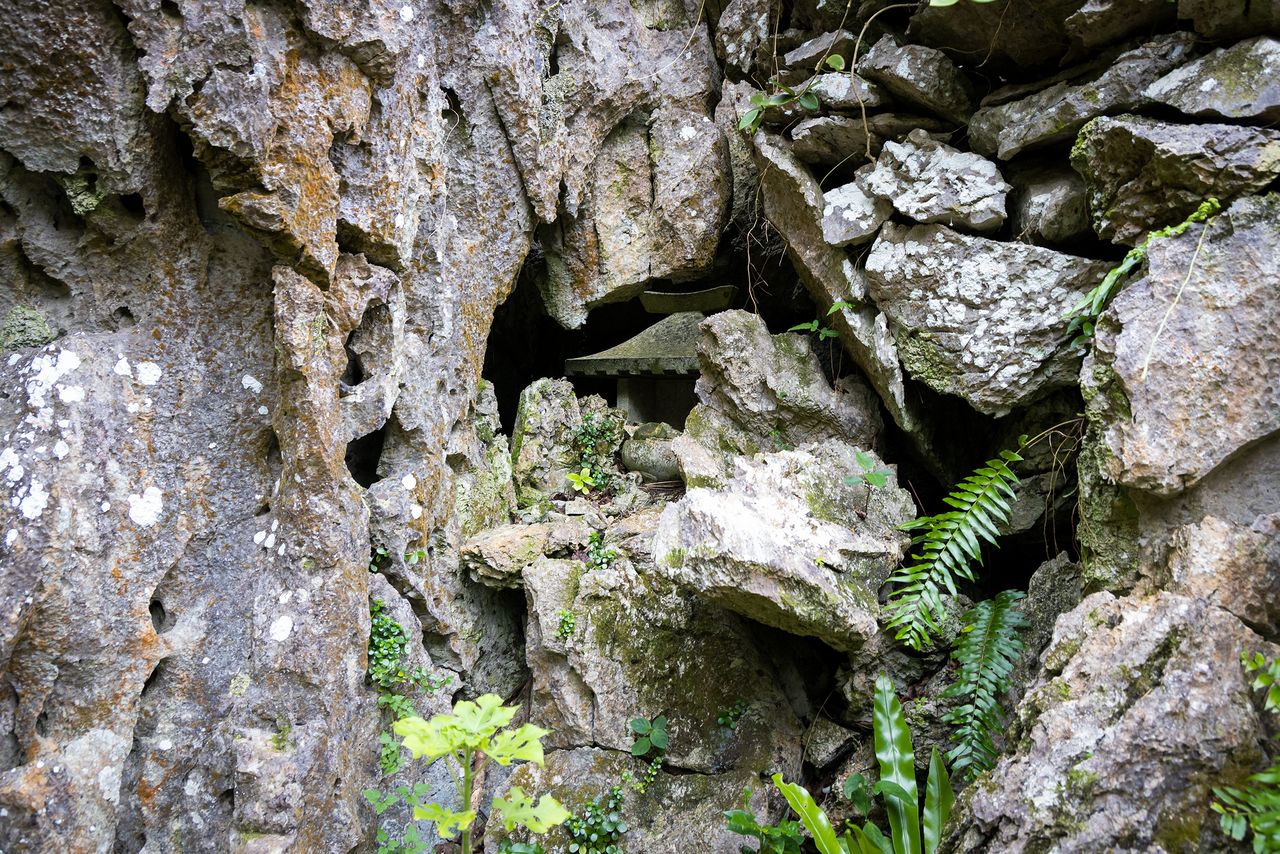 Some small devotional spots are easy to overlook.

Huge banyan trees line the trail, which also passes through colonies of hundreds of cycads. The Banyan of Worship near the end of the route spreads its branches wide and has one of the largest crowns of any tree in Japan. 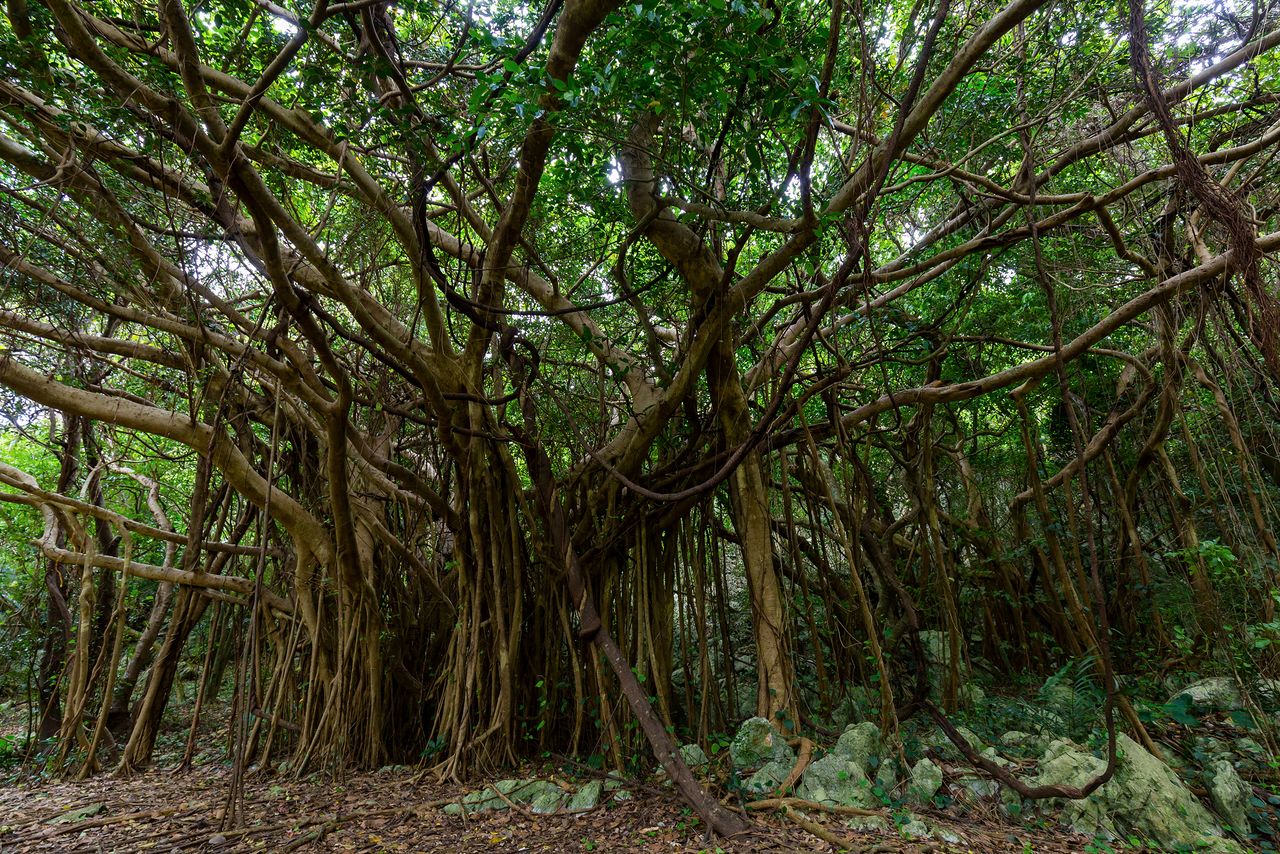 The Banyan of Happiness, where some say one can hear the voices of the spirits. 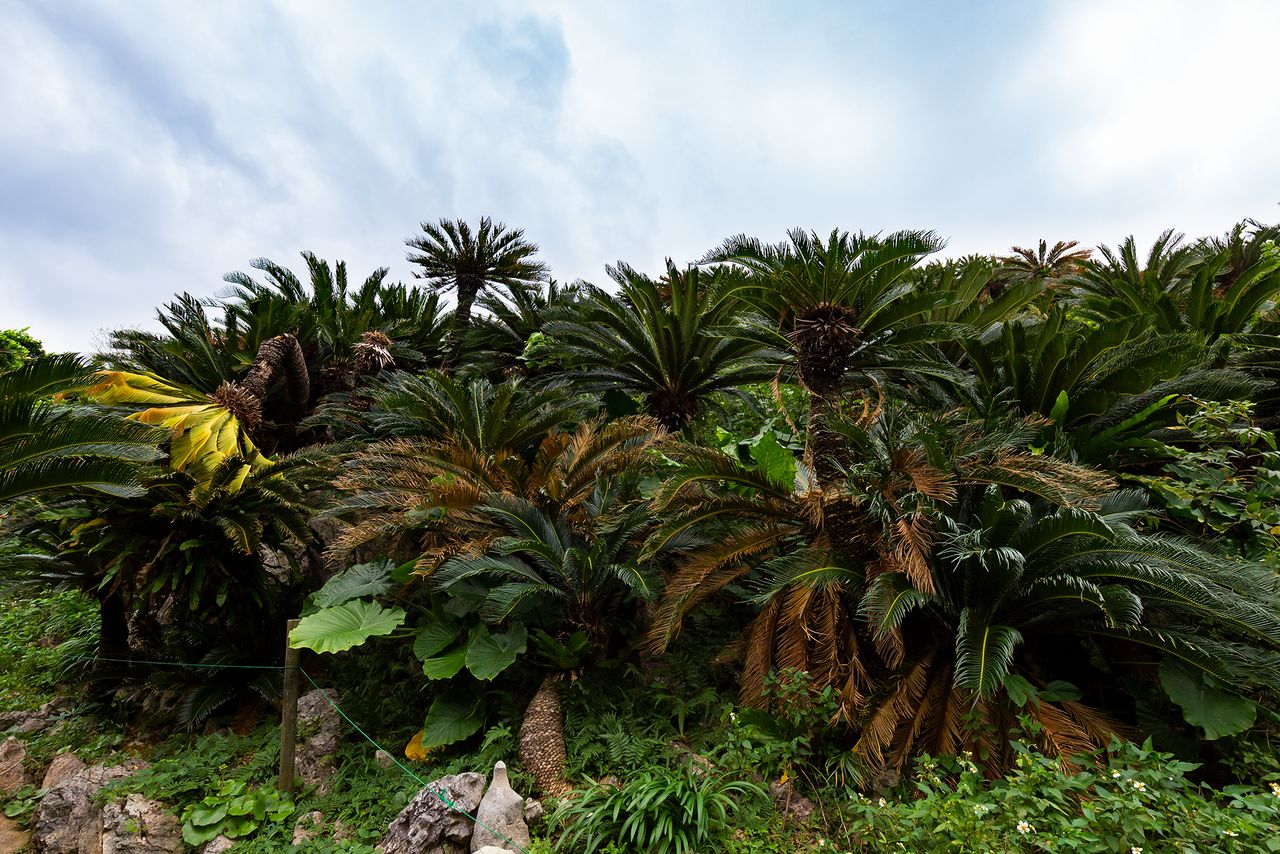 Cycads, some 60,000 in all, grow in colonies at Daisekirinzan. 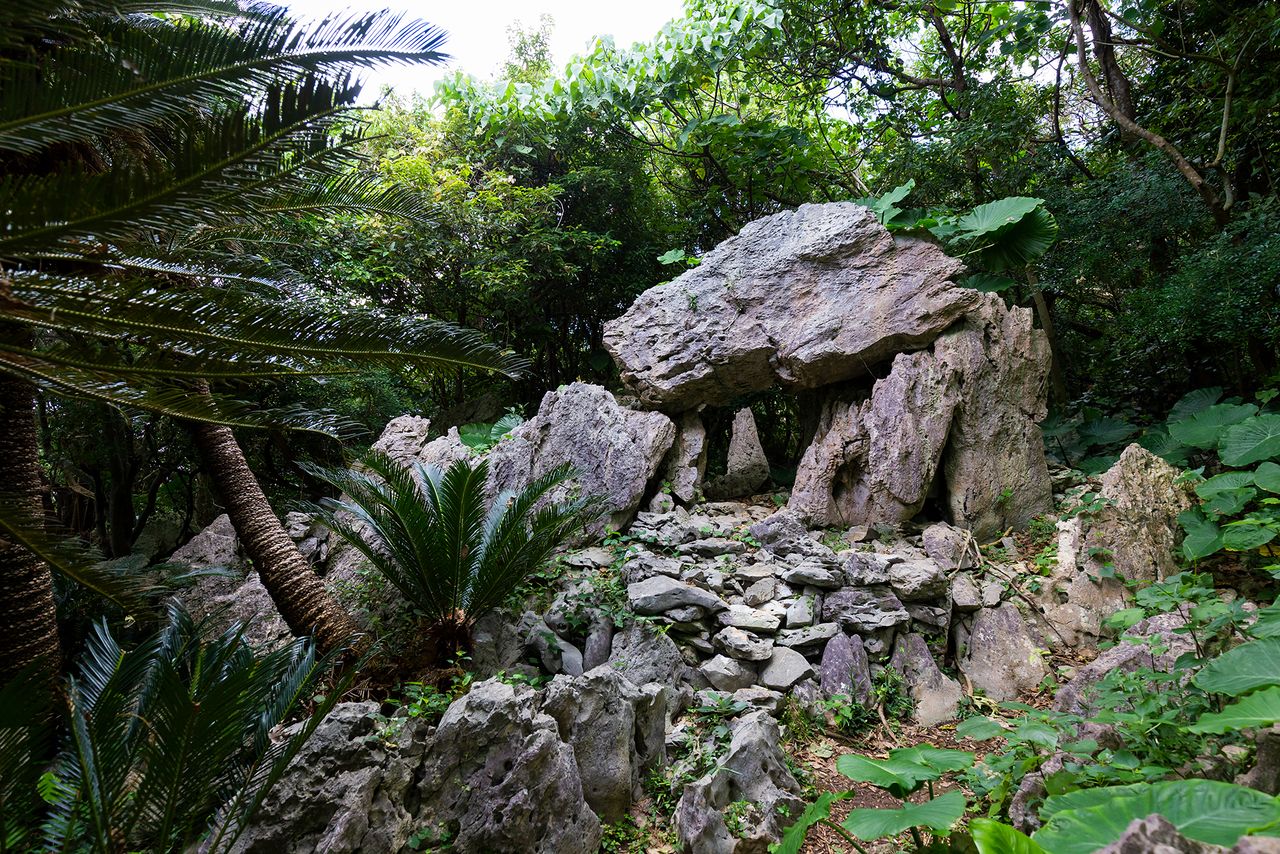 The stones at Agarime, another place of worship, are arranged to capture the morning light. 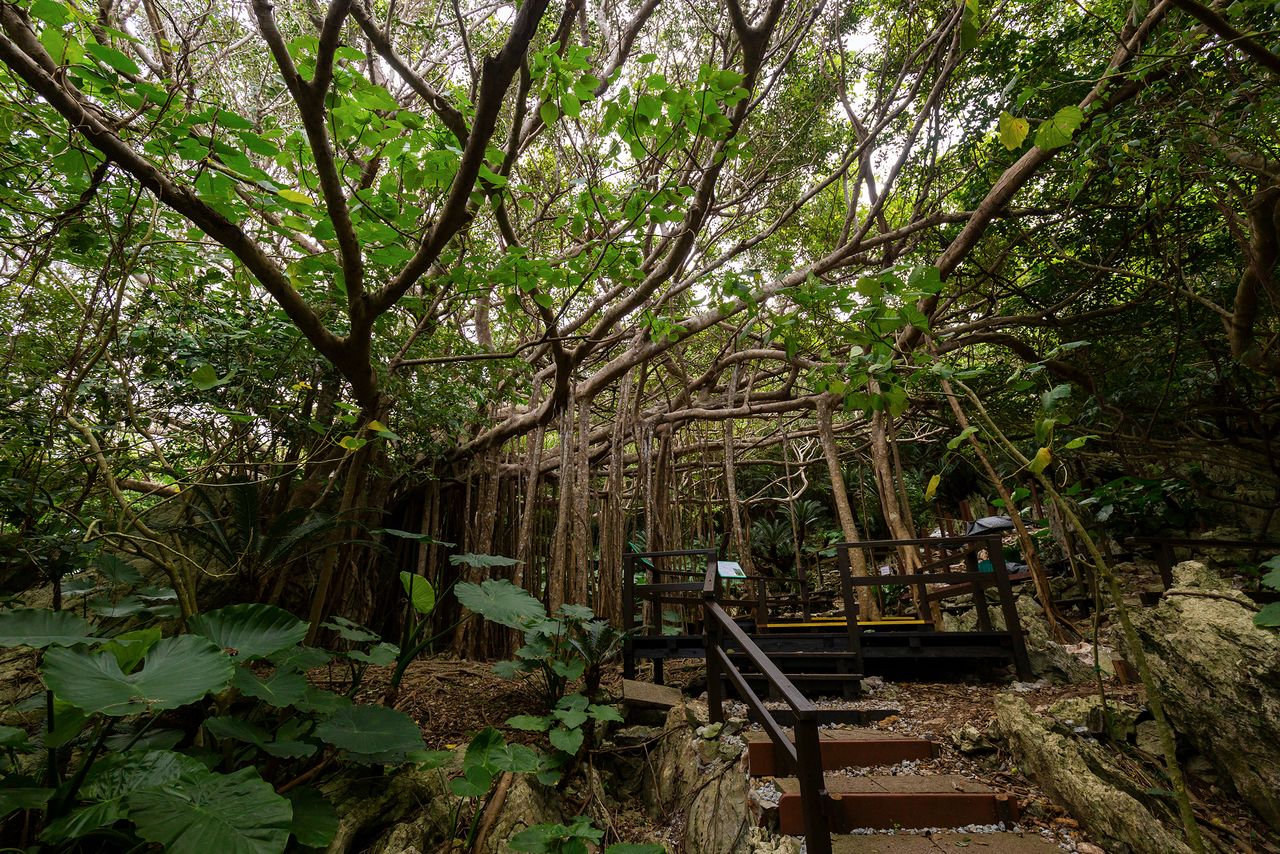 The Banyan of Worship stands near the ticket office.

Cape Hedo, just a five-minute drive away from Daisekirinzan, offers dynamic views of waves crashing at the base of sheer cliffs. Near the headland stands a monument to the local movement for the return of Okinawa to Japan, a fitting place to visit in 2022, the fiftieth anniversary of the prefecture’s reversion.

The Yanbarukuina Lookout near the cape is a lesser-known attraction. Although the path to the top is narrow and steep, it is worth the walk to take a look at the gigantic Yanbarukuina figure rising through the treetops. This vantage point affords a grand view of Yanbaru’s pristine forests, the ashimui sacred ground, and Cape Hedo. 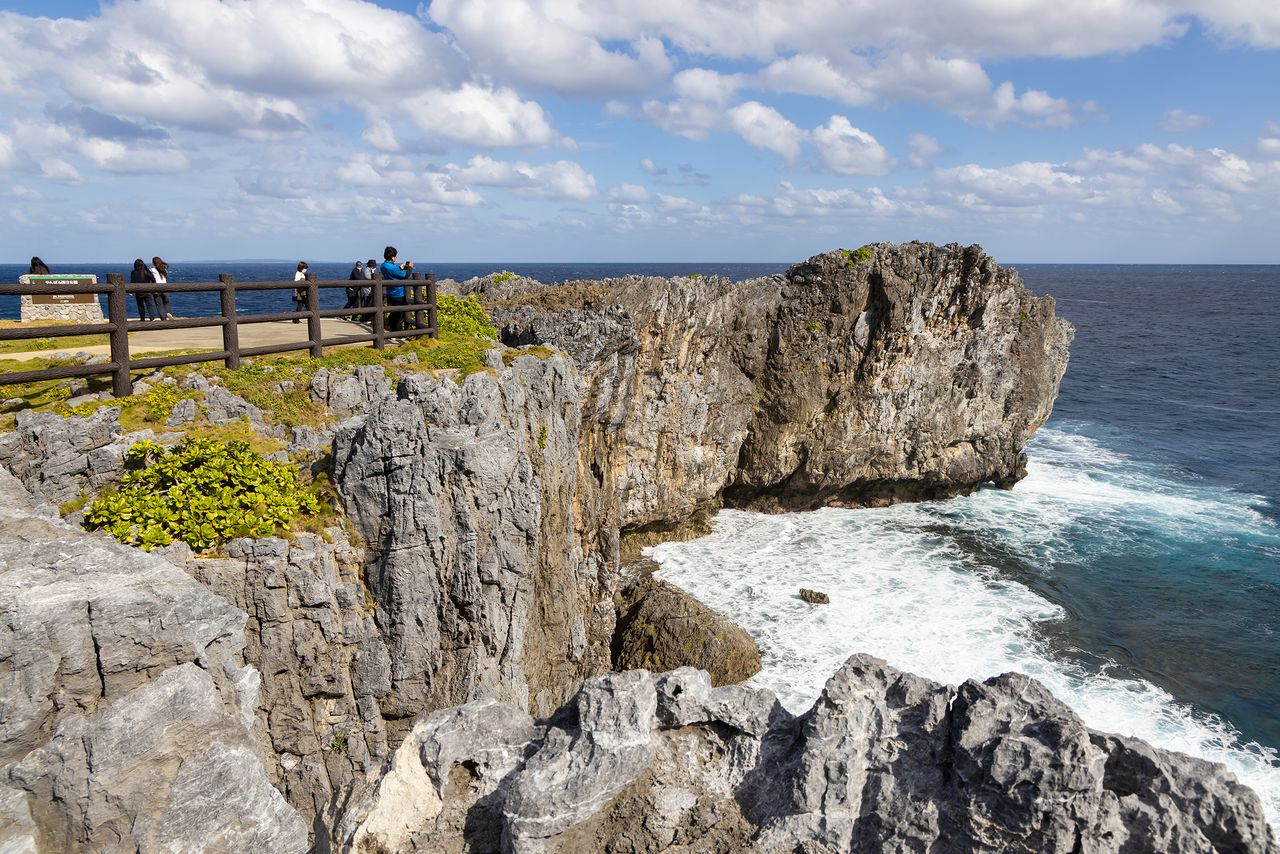 Cape Hedo, the northernmost point on the main island. 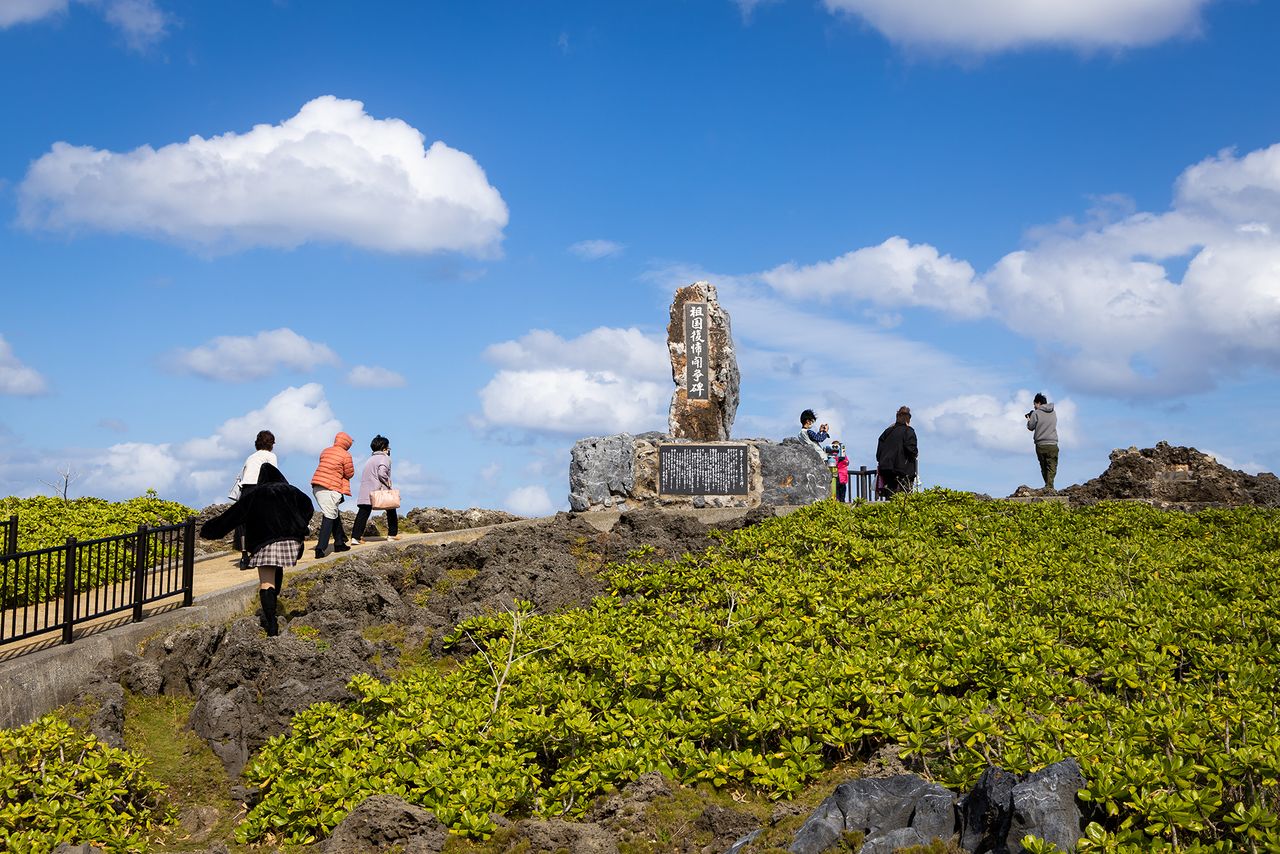 A monument commemorating the struggle for the return of Okinawa to Japanese rule was erected in 1976. Activists would light signal fires here and across the water on Yoron Island, the closest part of Japan to Okinawa until reversion. 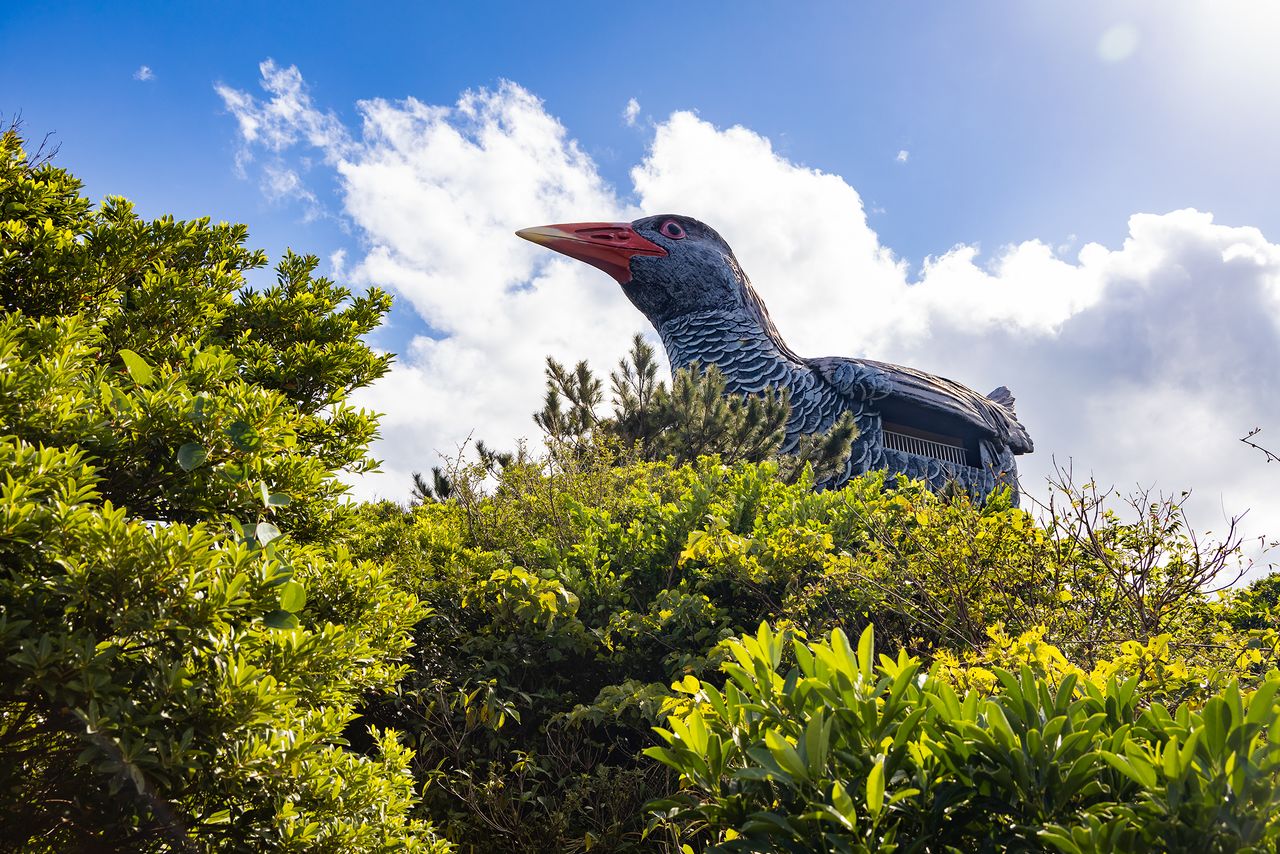 This giant Yanbarukuina signposts the lookout of the same name. 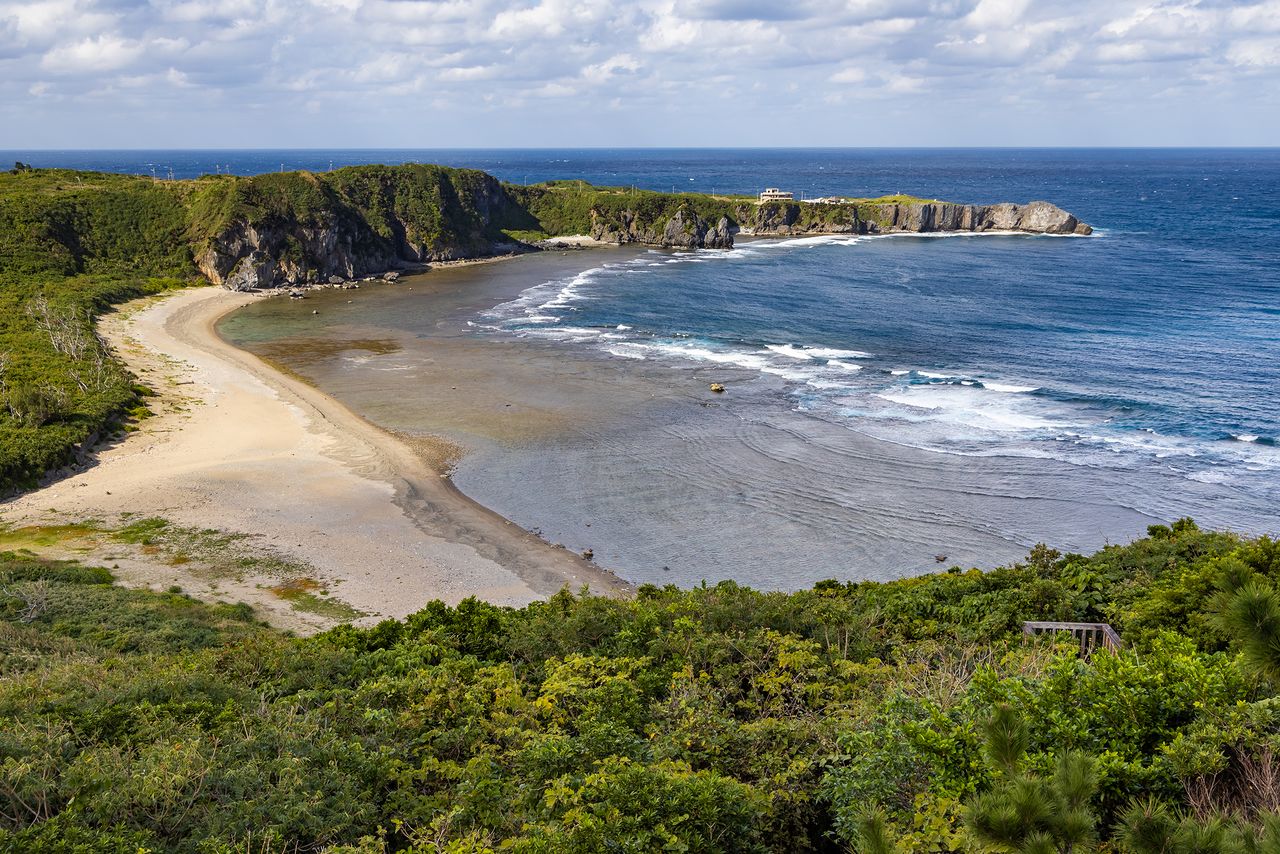 The view of Cape Hedo from the Yanbarukuina Lookout. Uzahama beach in the foreground is a popular spot.

Southwest from Daisekirinzan along the coast is Kayauchibanta, a sheer cliff 80 meters high. Atop the cliff is a lookout with a view of one of Okinawa’s most attractive panoramas, and which is also a very popular spot for enjoying spectacular sunsets. 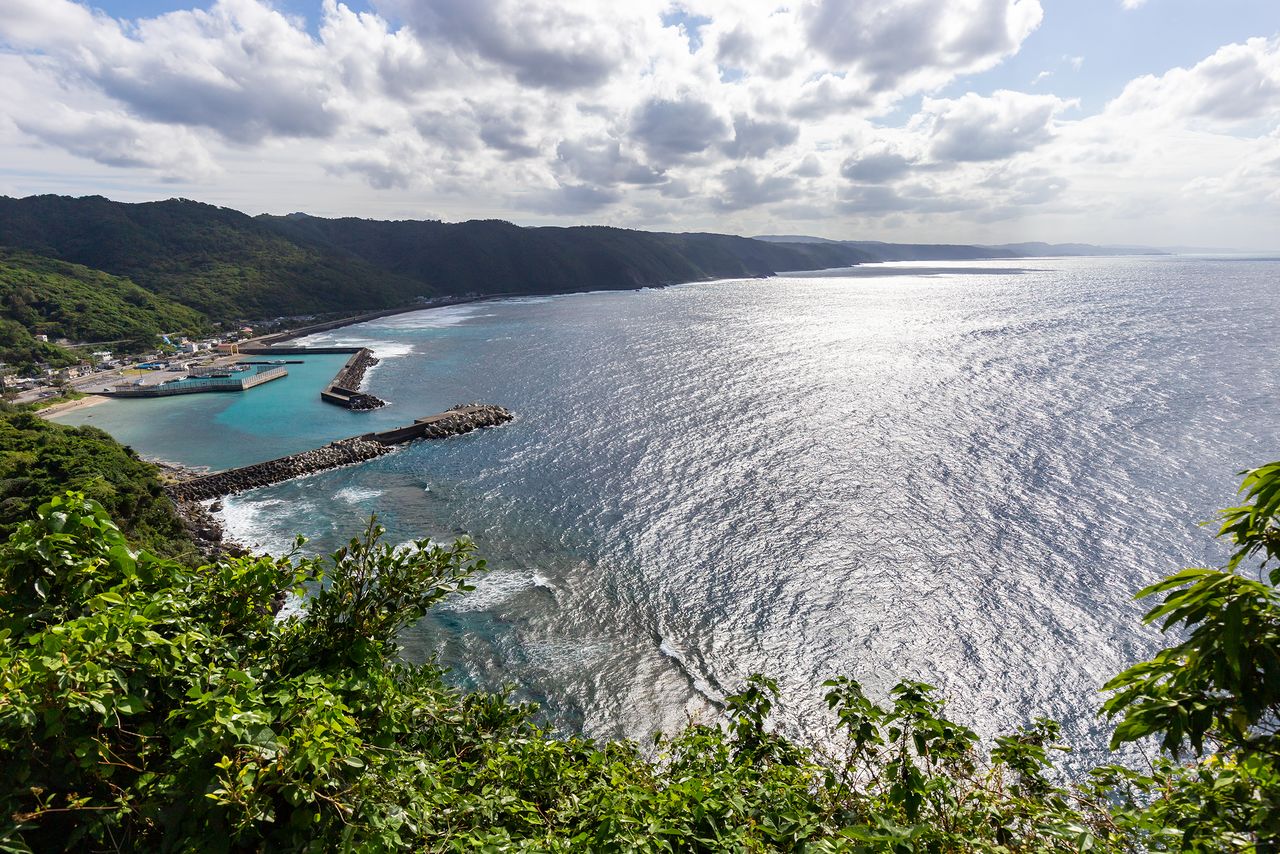 The view from Kayauchibanta is designated a “New Hundred Best Spots for Okinawa Tourism.” 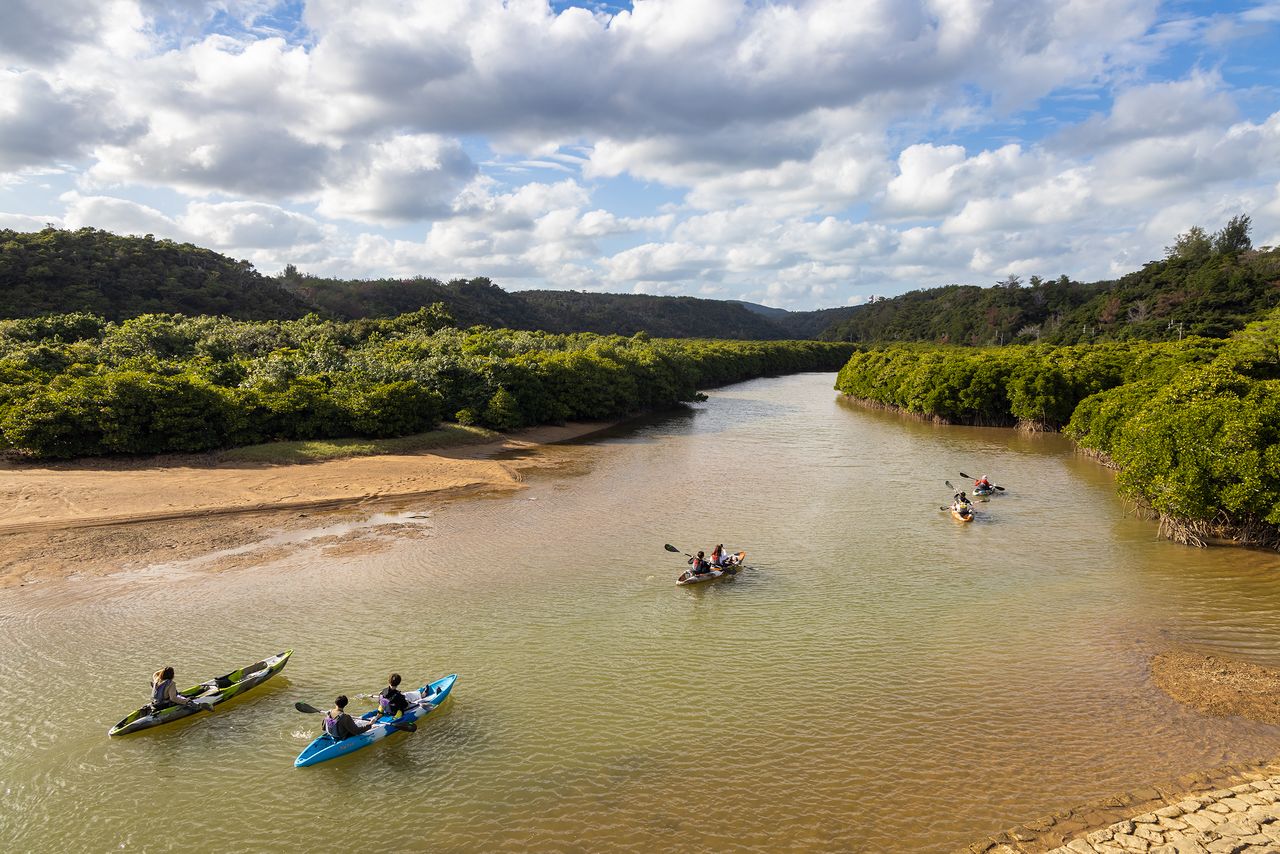 On the way back from Daisekirinzan, visitors can try activities like canoeing through mangrove forests on the Gesashi River in Higashi or river trekking at Taa Falls in Ōgimi.