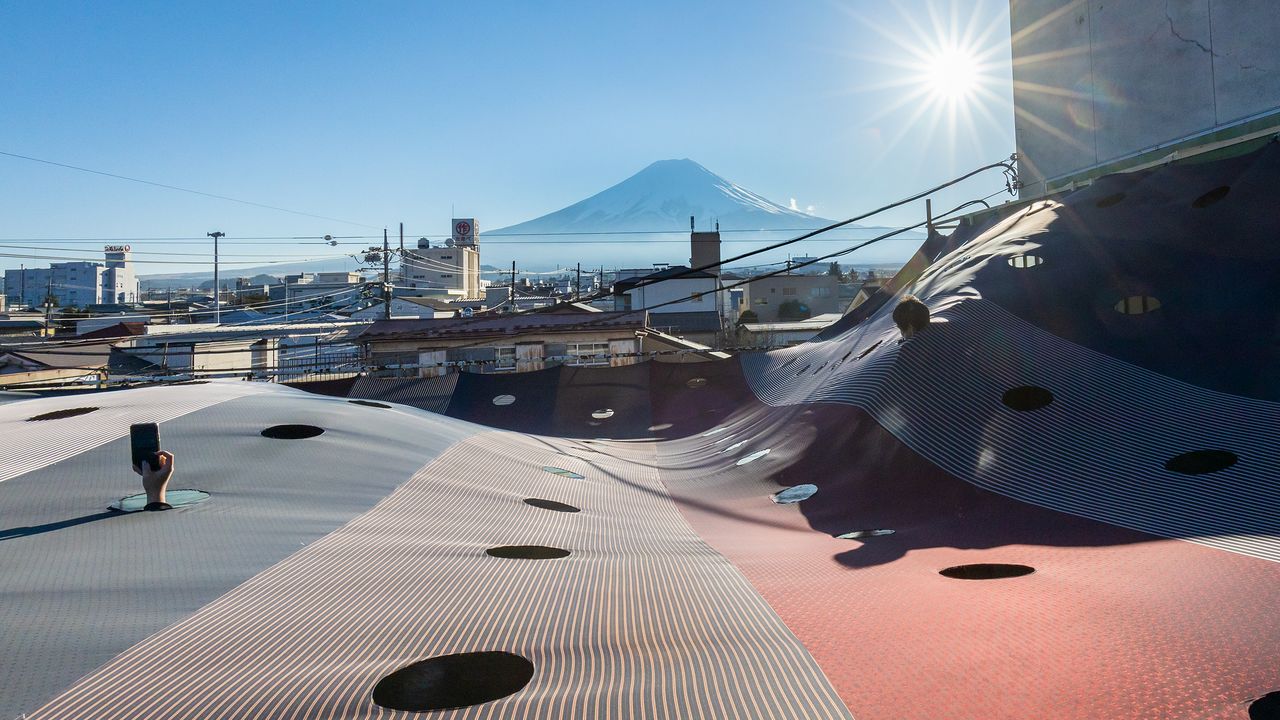 Fujiyoshida: Textile Center at the Foot of Mount Fuji

Travel Fashion Feb 18, 2022
Fujiyoshida, the city closest to World Heritage site Mount Fuji, has a long history as a textile producer. Although the industry diminished in recent decades, weavers and local authorities have started working hand in hand to highlight the industry’s traditions and high-quality output.

Fujiyoshida in Yamanashi Prefecture is known as the location of a now iconic photo featuring Mount Fuji and the Chūreitō pagoda in the city’s Arakurayama-Sengen Park. In 2015, the image graced the cover of the Michelin Green Guide Japan, and then the front of the Lonely Planet guide Best in Travel 2016, instantly putting Fujiyoshida in the spotlight at home and abroad. 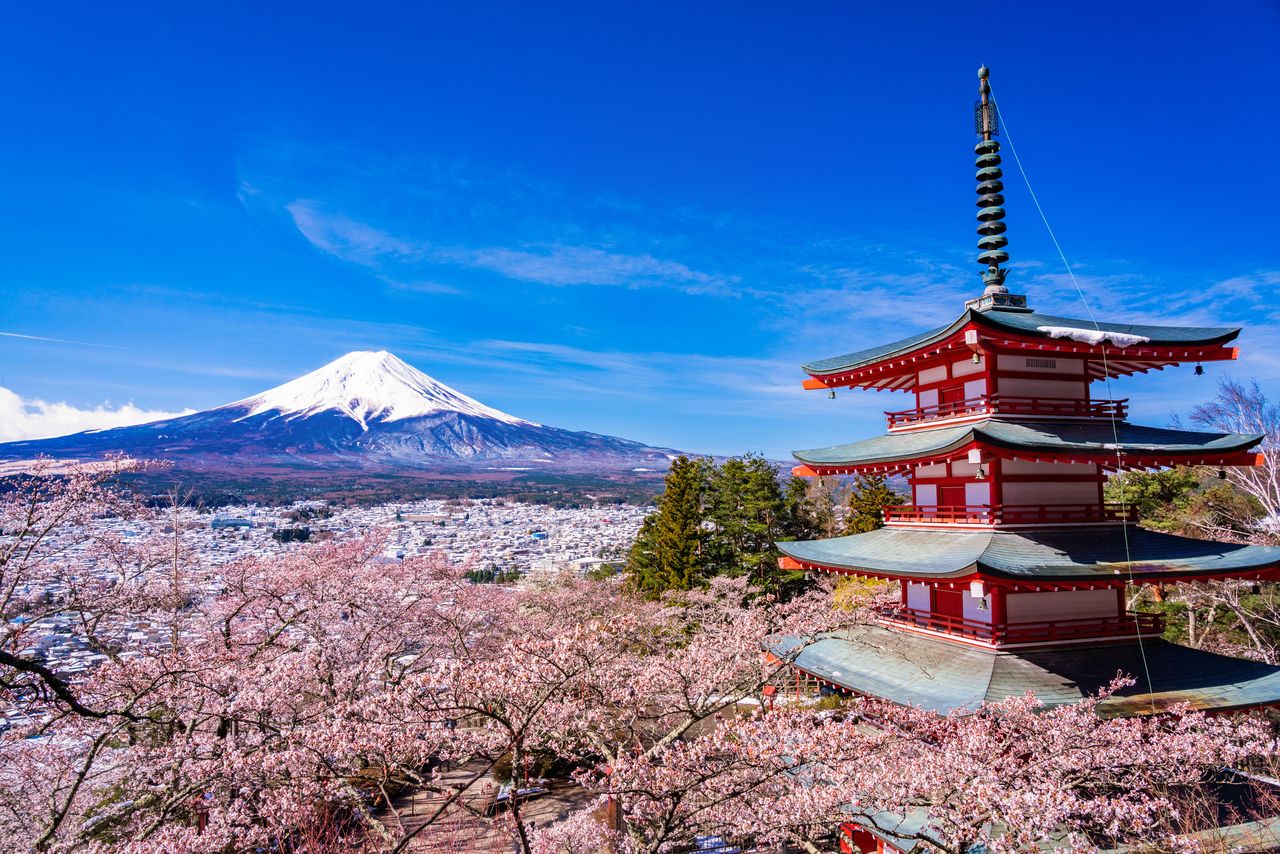 This iconic image of springtime cherry blossoms, the Chūreitō pagoda, and Mount Fuji has been shared worldwide on social media. (© Pixta)

Ever since, the pagoda and its scenic environs have been go-to destinations for travelers. The site was not especially well known in Japan, but with growing international attention it has become a popular day-trip destination for visitors from the Tokyo area. Despite the influx of tourists, though, few have taken time to explore Fujiyoshida itself, opting instead to climb Mount Fuji, visit the Fuji Five Lakes area, or head for the Fuji-Q Highland amusement park.

Fujiyoshida is now running a public relations campaign about the city’s past and its modern-day attractions. One feature the campaign emphasizes is the local tradition of weaving, a craft established here over one thousand years ago. In fact, before its acclaimed pagoda, Fujiyoshida was known around the world for its weaving technology and quality products. 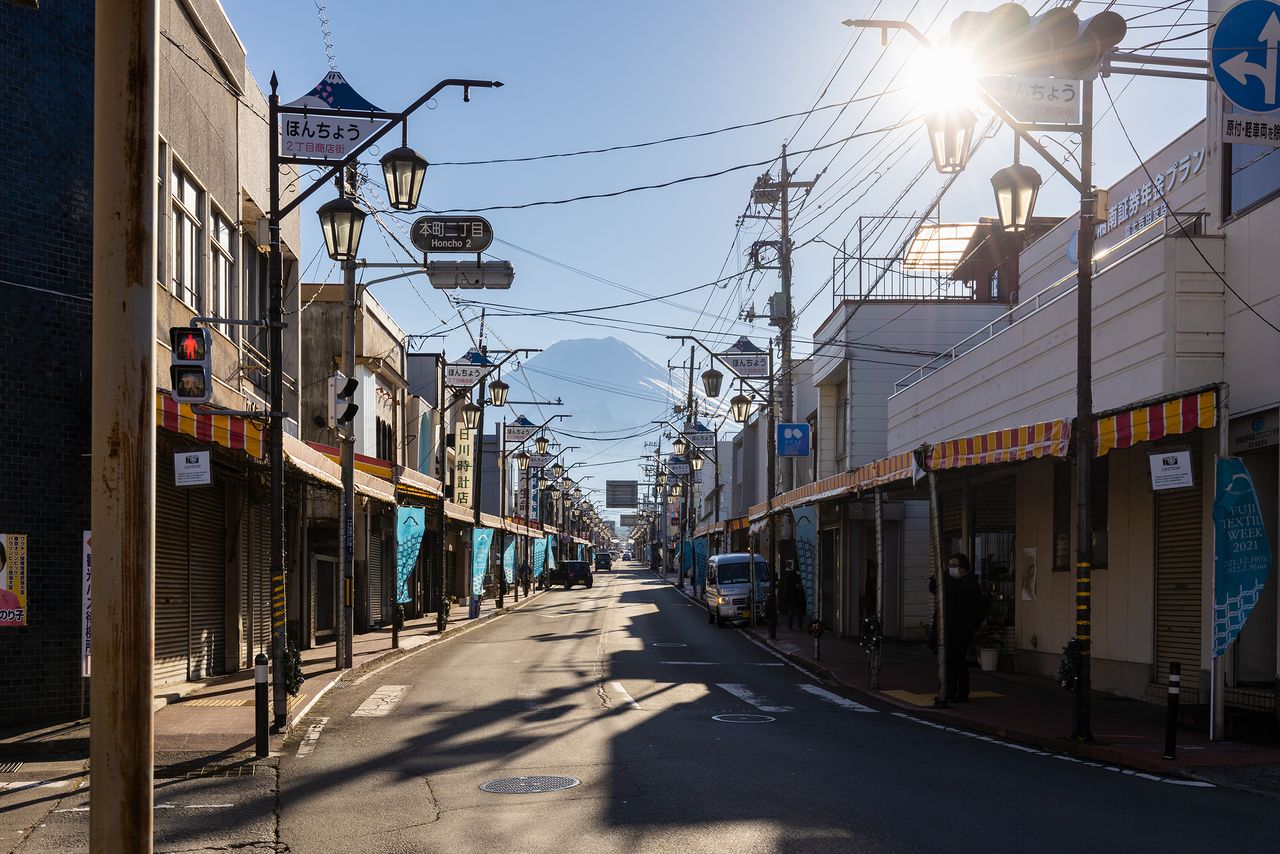 Long History as a Weaving Center

Visitors can start their tour of the city’s weaving traditions at Fujiyoshida’s information center, a facility operated by the local textile cooperative that stands adjacent to Fujisan Station on the Fujikyuūkō Line. The center displays textiles woven in Fujiyoshida and provides an overview of the local weaving industry’s history along with information on factory tours.

Several textile manufacturers in Fujiyoshi have created their own house brands and take turns hosting “Open Factory” events in which they open their doors to the public. The events are held the third Saturday of every month. Visitors can peruse outlet items and also reserve a place at a workshop to create a stole or tie-dyed fabric. 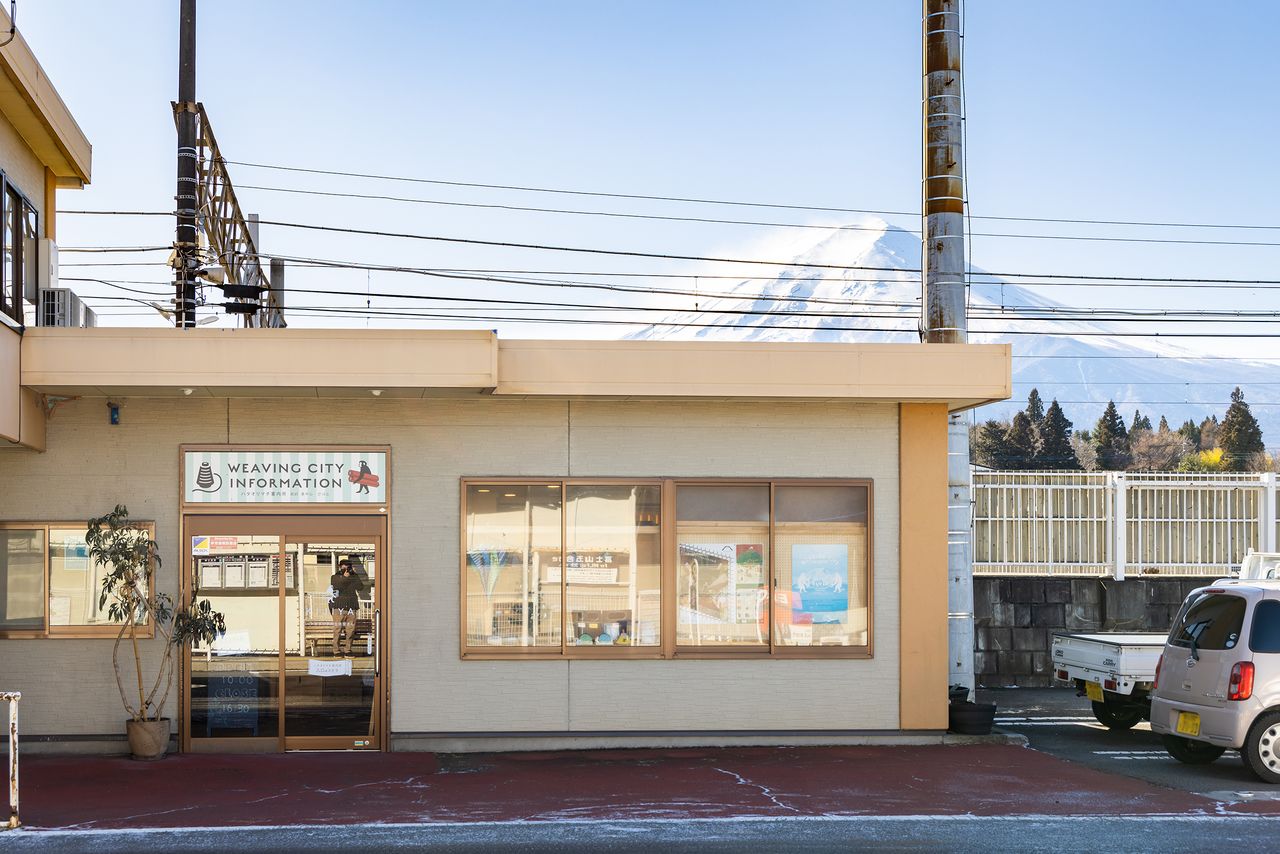 The Fujiyoshida Textile Information Center, with Mount Fuji in the background. 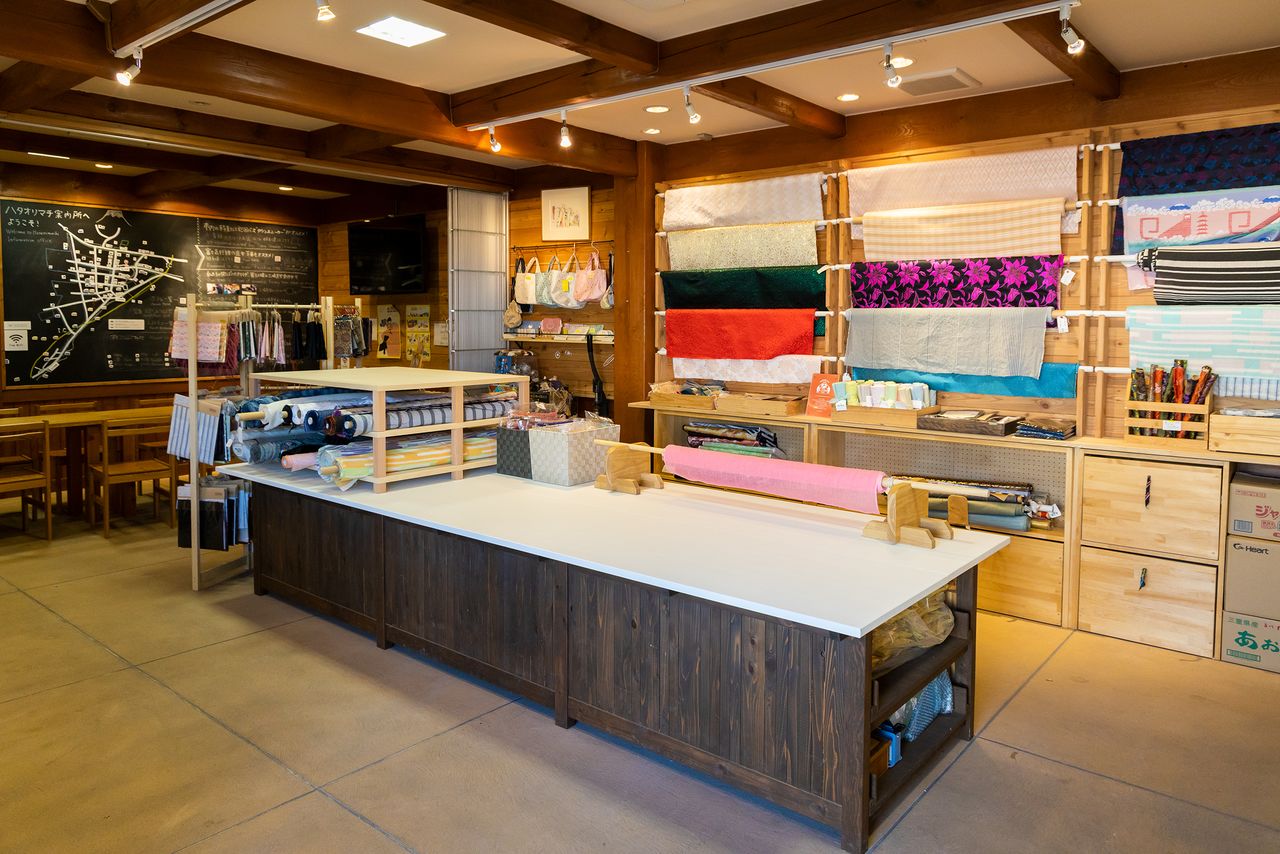 The Center offers a space where visitors can inspect fabrics or try their hand at making a fabric-covered button. 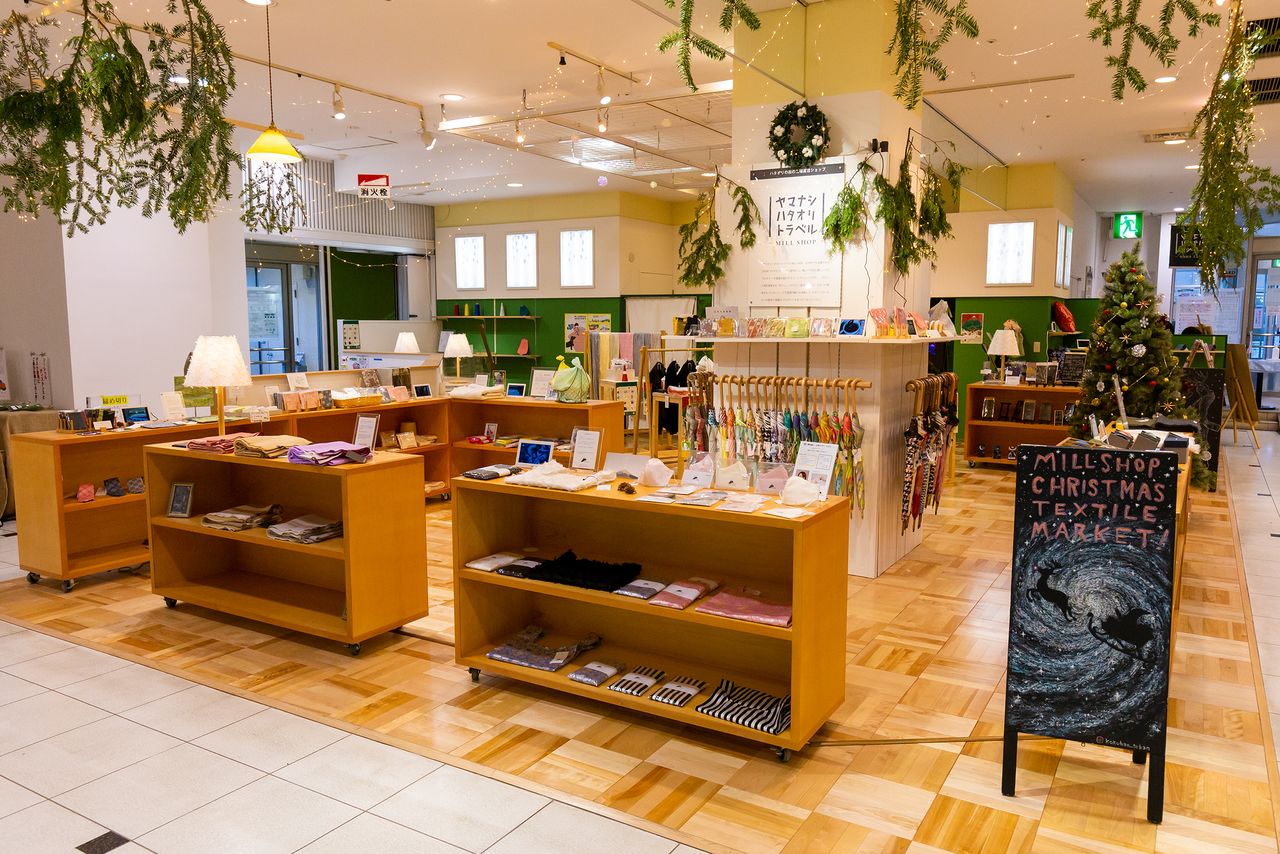 Small items from local textiles are available at the Yamanashi Weaving Travel Mill Shop in the Q-Sta shopping mall next to Fujiyoshida Station.

Weaving in Fujiyoshida dates back over a millennium, although some sources say it began in prehistoric times. The earliest written evidence is the Engishiki compilation of laws and customs completed in 927, which mentions that the Province of Kai (present-day Yamanashi) was obliged to provide cloth.

Maeda Tomio, an executive at textile firm Maedagen, which handles mainly organic cotton, explains that weaving took root as local soils are unsuitable for farming. “The plentiful snow-melt water flowing from Mount Fuji was ideal for dyeing, though,” he explains. “Many locals were engaged in raising silkworm and weaving from early on.” 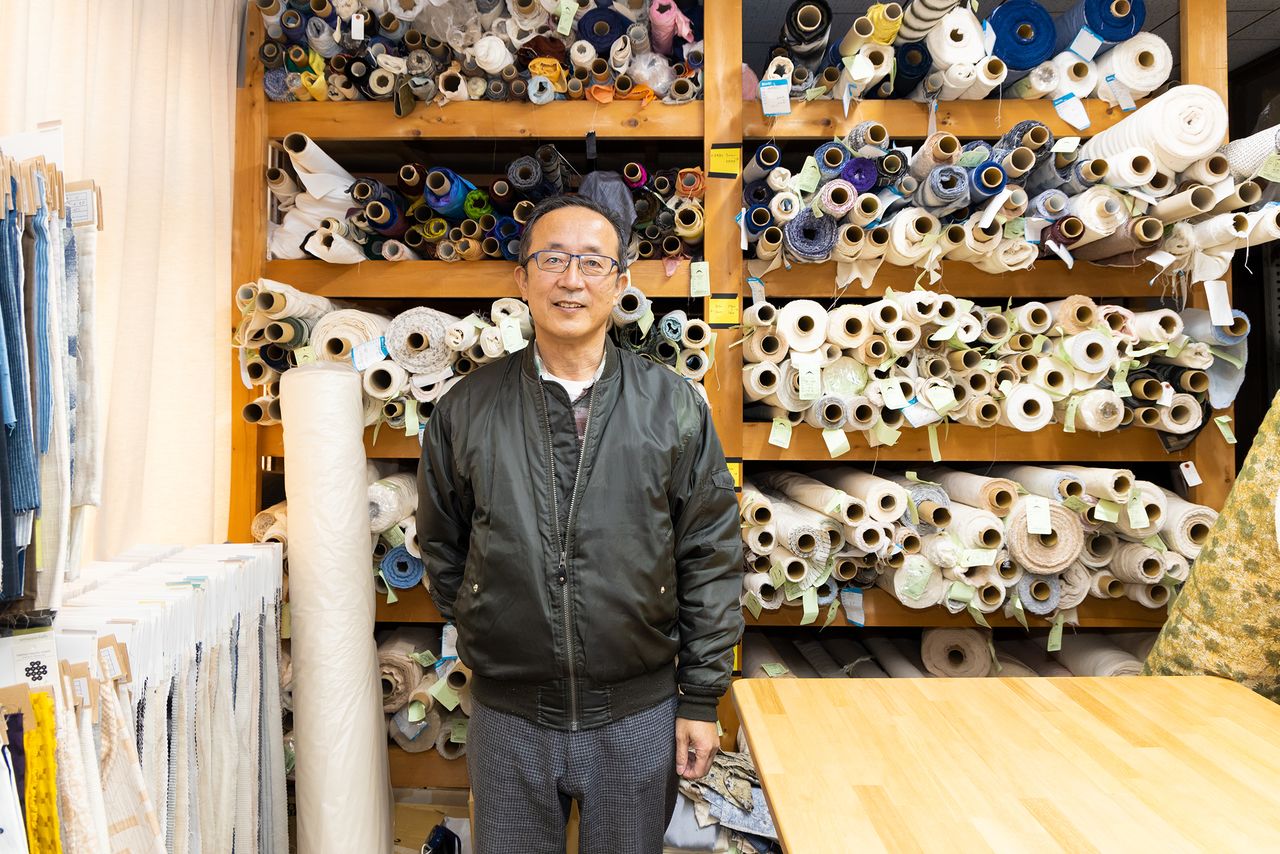 Maeda Tomio, of Maedagen. The shop originally was in the business of weaving silk for umbrellas and other items, but has recently branched out into organic cotton. 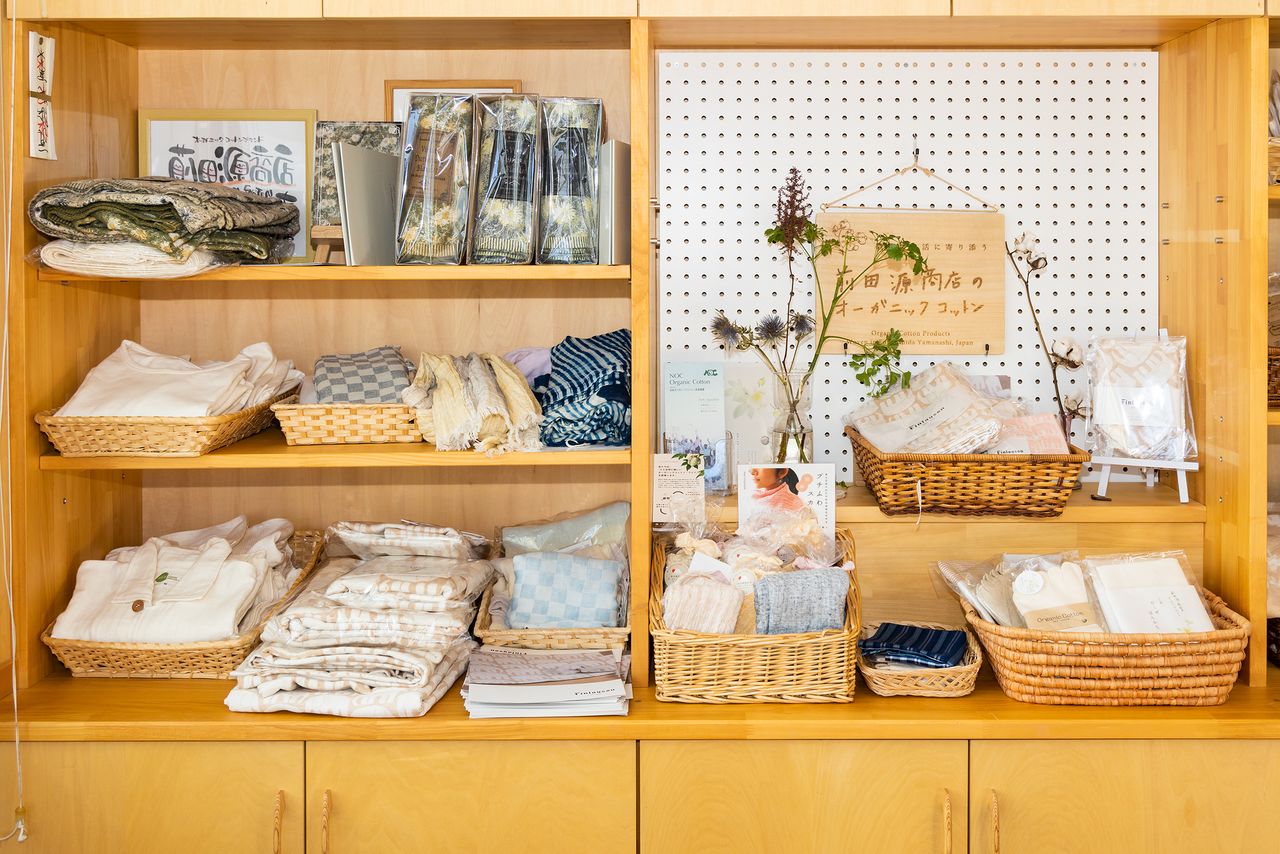 Stoles and other items made from cotton produced on looms originally designed for fine silk weaving are popular for their uniquely soft texture.

During the Edo period (1603–1868), yarn-dyed Kai silk was a popular item. Dyeing the thread before weaving yielded fabrics with vibrant colors that retained their hues and were resistant to fading. Sophisticated weaving skills also made it possible to produce patterned fabric, which was often used to line haori, a type of jacket worn over kimono.

Maeda says that in Edo times, social rules mandated that ordinary people dress in a restrained manner, but that they expressed their sense of style through the linings of their garments. “Outwardly, their dress was drab. When they took off their haori at a banquet or some other occasion, though, their garment’s fancy lining was on view for all to see.” He explains that in this way, fashion conscious people in society vied to outdo their peers. 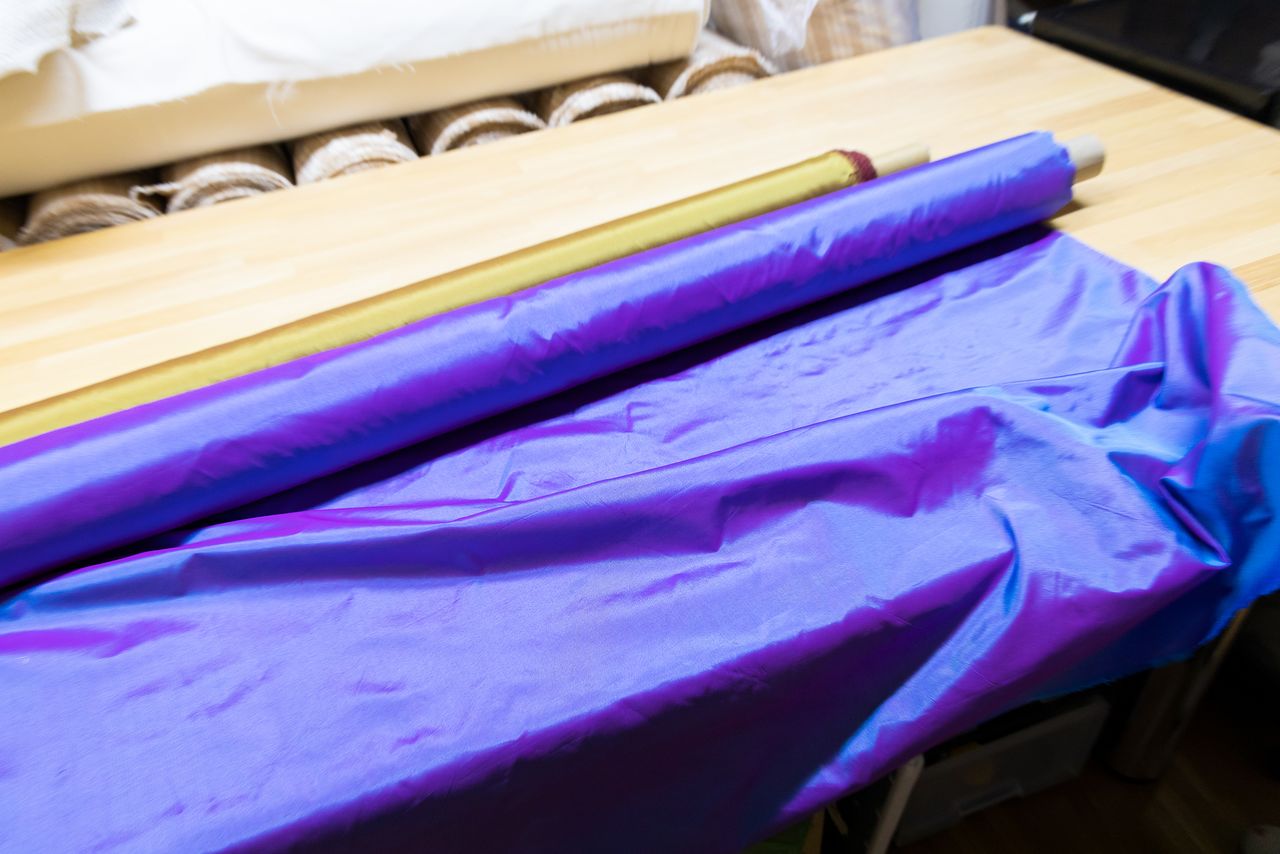 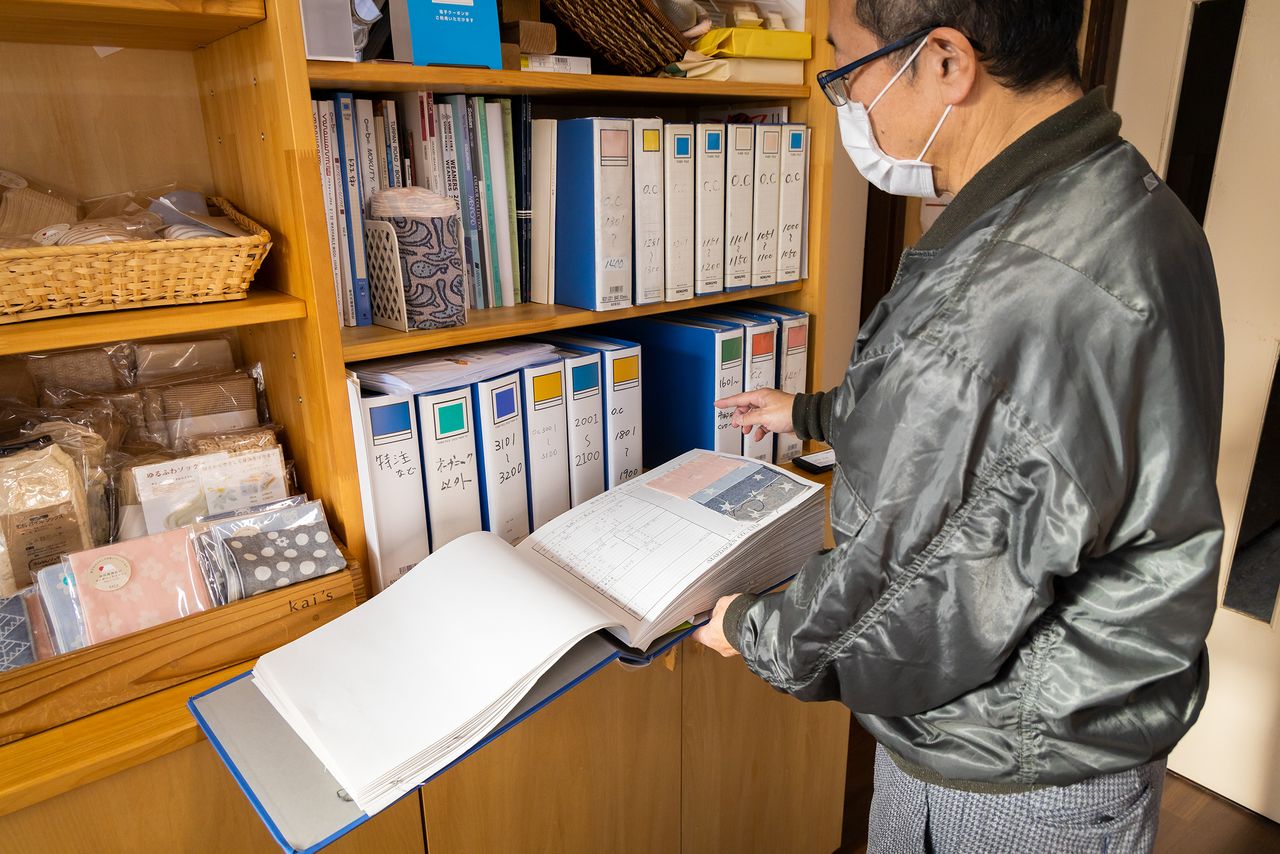 Each bolt of fabric has its own detailed specifications.

Fujiyoshida continued to prosper as a purveyor of quality textiles after the last decades of the nineteenth century, but experienced a decline during World War II when its looms were taken due to wartime requisition of metals. In the immediate postwar years, the trade sprang back. Wholesalers would flock to Fujiyoshida from all over the country to buy its textiles. In those days, each clack of the loom was likened to cash pouring into the till.

“Unfortunately, the renewed burst of prosperity was short-lived,” declares Kobayashi Shinji, operator of Tenjin Factory, which specializes in linen. Fujiyoshida’s weaving industry suffered a blow when imported textiles starting pouring into the country in the 1960s, leading several weaving concerns to either shut down or downsize their operations. Between 1975 and 1985, the region’s textile makers agreed to dispose of their looms en masse, and approximately 40% were destroyed. Lean years followed. Today, there are 200 companies with about 1,000 looms, compared to the industry’s most prosperous period, when there were over 6,000 weaving companies operating 20,000 looms. 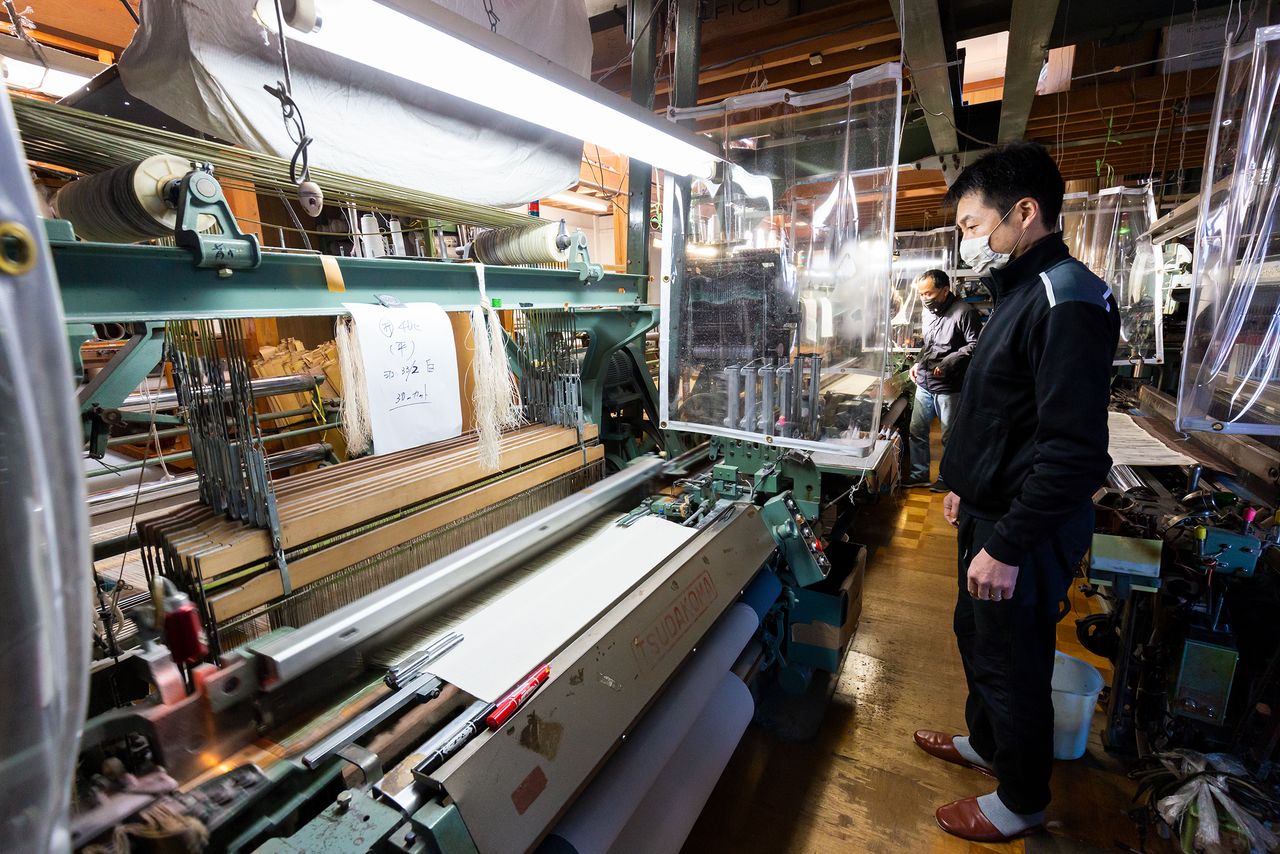 Kobayashi checks a loom. He says that older machines are sometimes preferred for weaving certain types of fabrics. 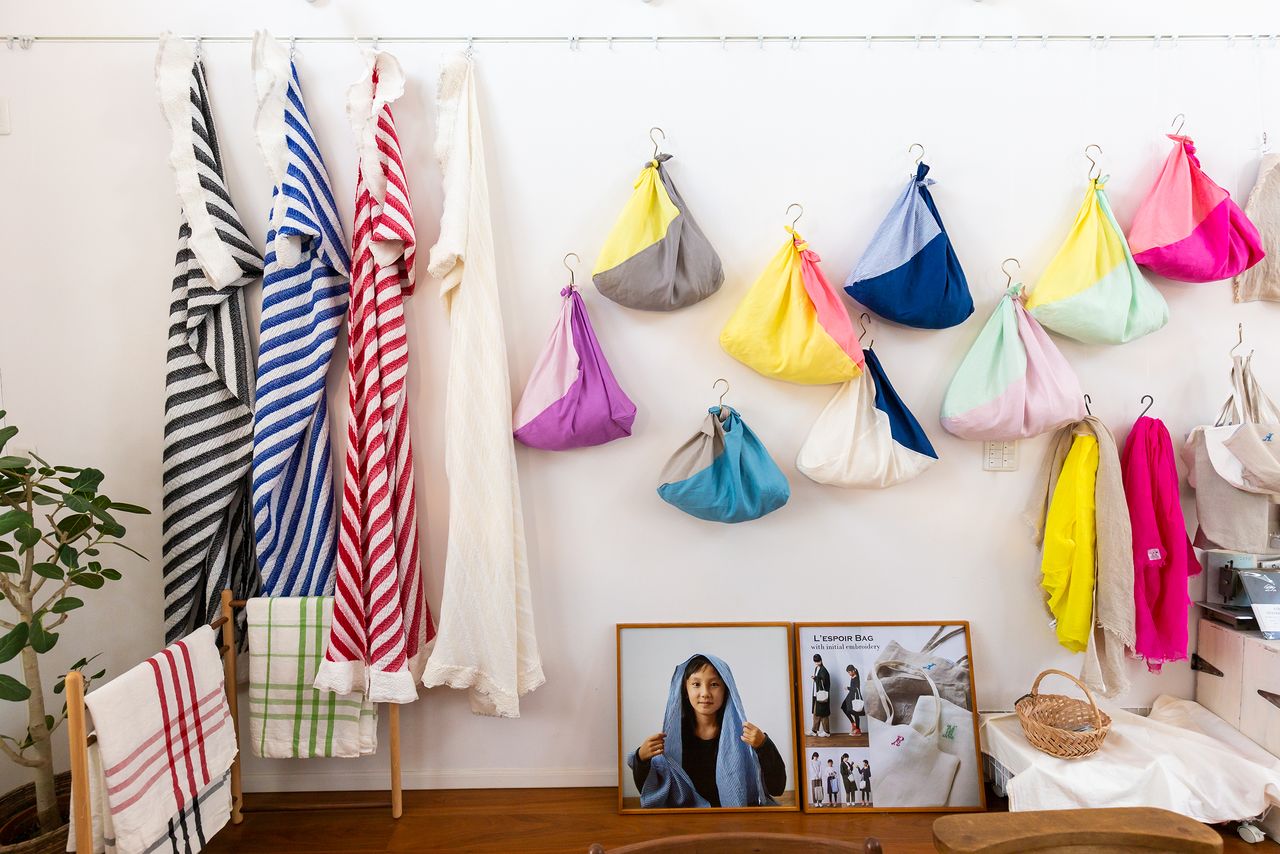 Despite these setbacks, the weavers of Fujiyoshida have transmitted their skills and worked hard to preserve the local craft. Motivated by connections with students from fine arts school Tokyo Zōkei University, in the last 10 years or so younger business owners have branched out in new directions, opening factory-owned shops or launching private brands.

“Many local weaving businesses are known for their highly-developed technologies and specialize in niche products unsuited for mass production,” explains Kobayashi. “But they are very small outfits and few produce outer cloth for garments, which may be why the local industry isn’t very well known.” Even though textiles made in Fujiyoshida are less in the limelight today, they continue to be used for garment linings, neckties, and umbrellas. 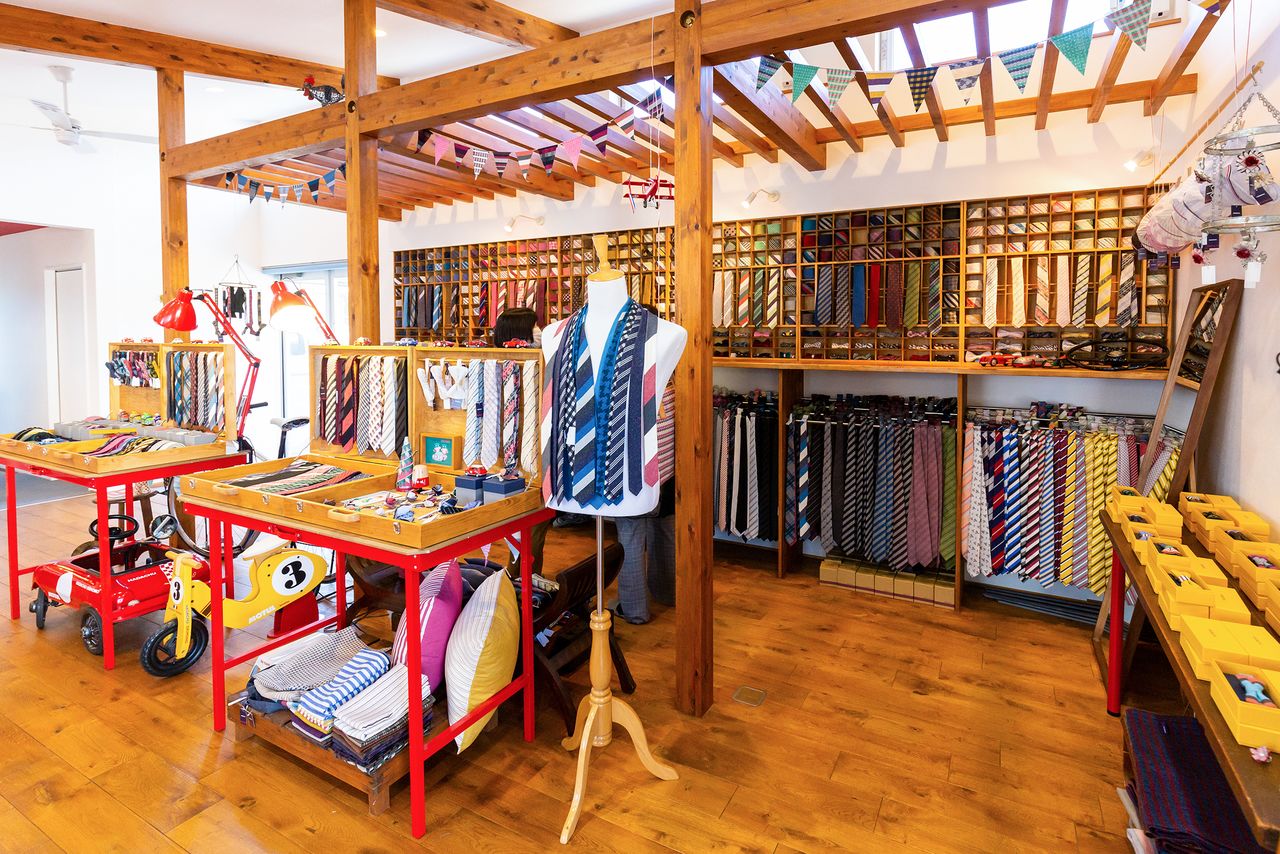 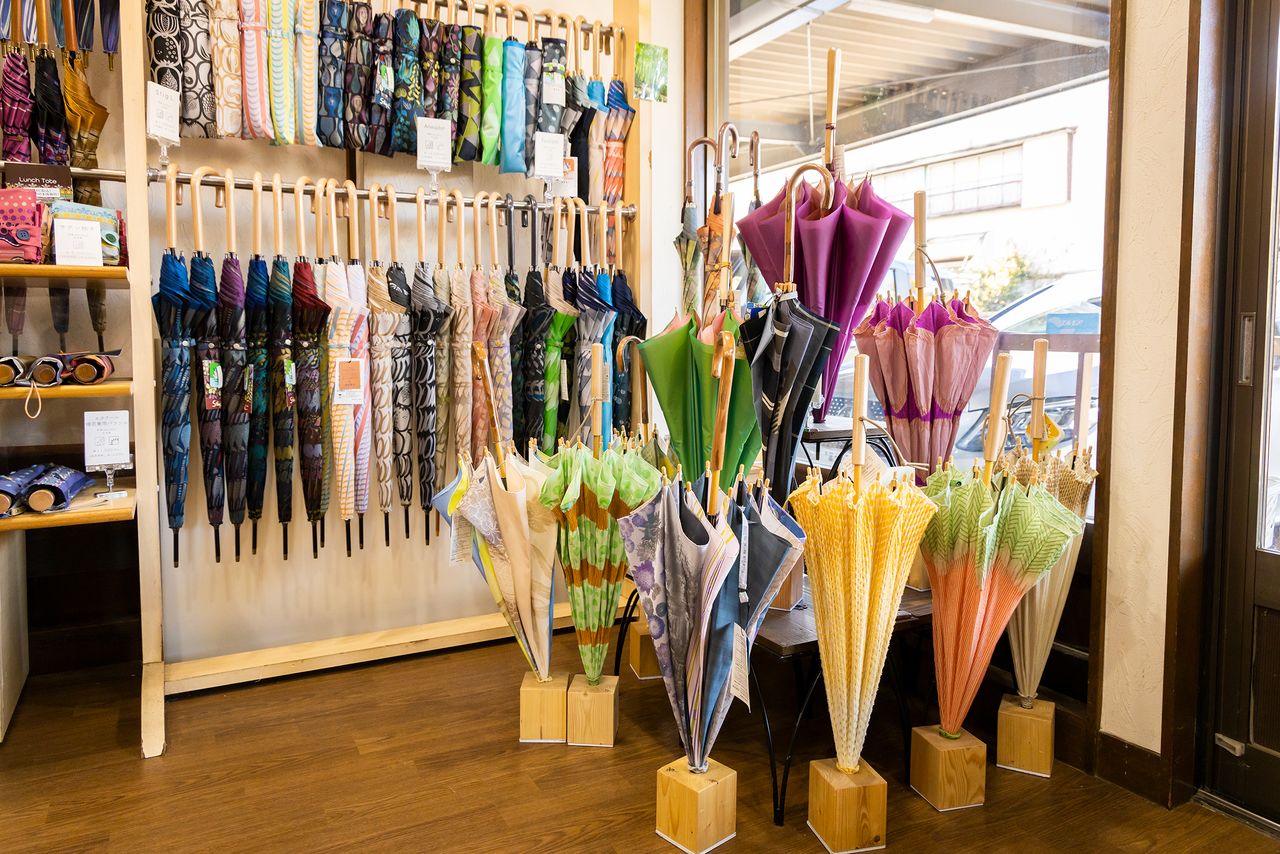 A shop operated by Makita Shōten, which produces fabric and also designs and manufactures umbrellas. 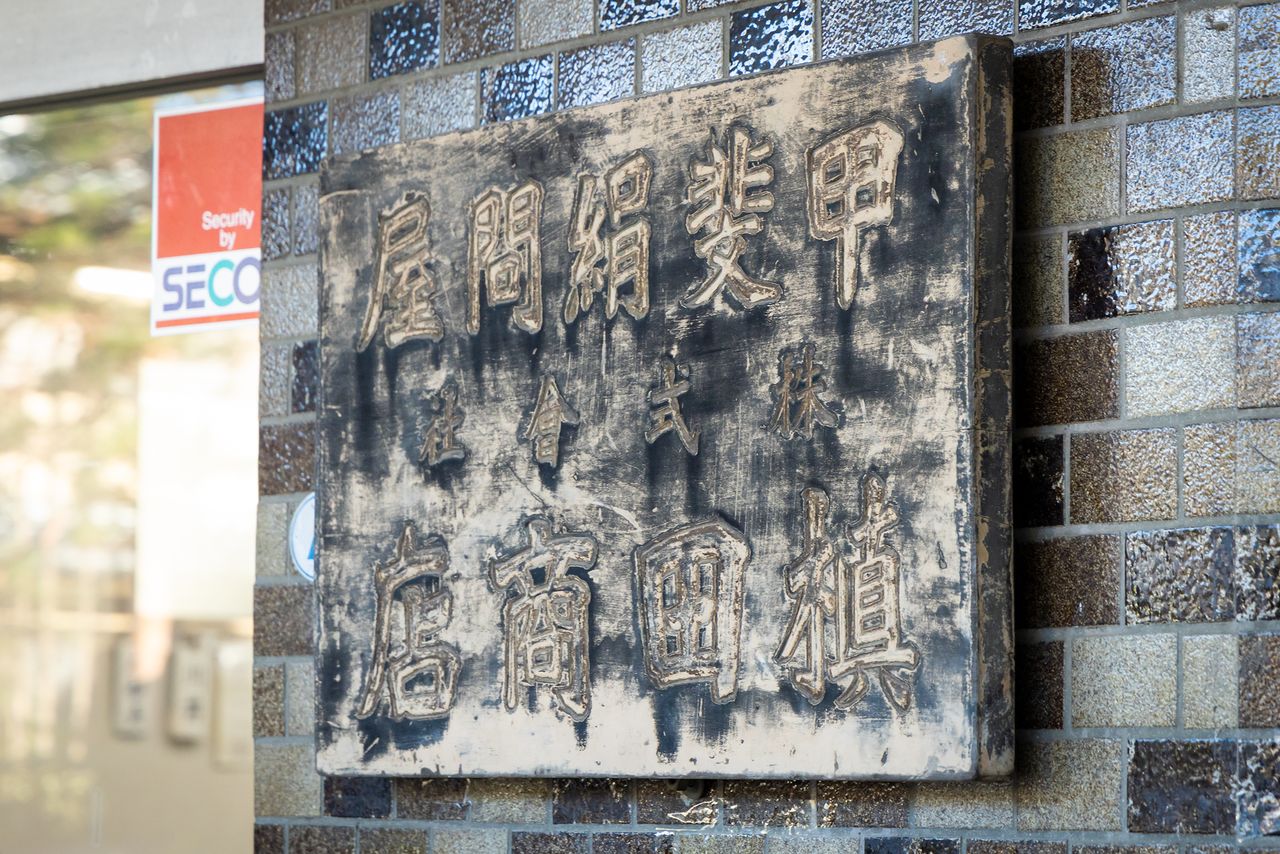 This sign for Kai Silk Wholesalers is over 150 years old.

Fujiyoshida textile producers have some of the best skills in the country, which has attracted notice among students who have worked hard to communicate the appeal and tradition of the local industry. Enticed by the city’s location in the foothills of Mount Fuji, many of the students even moved to Fujiyoshida after graduation. This spurred young weaving business owners to develop unique products for sale in their directly-owned shops to broadcast the appeal of their wares. It has also created a movement attracting creators from near and far. Working with this new blood, city authorities have gone into high gear to put “textile city” Fujiyoshida back on the map.

“We Fujiyoshida natives had lost sight of what made our city attractive,” says Kobayashi. “Young folks rediscovered the local appeal, just like foreign visitors were drawn to the area by that famous photo of the Chūreitō pagoda.” 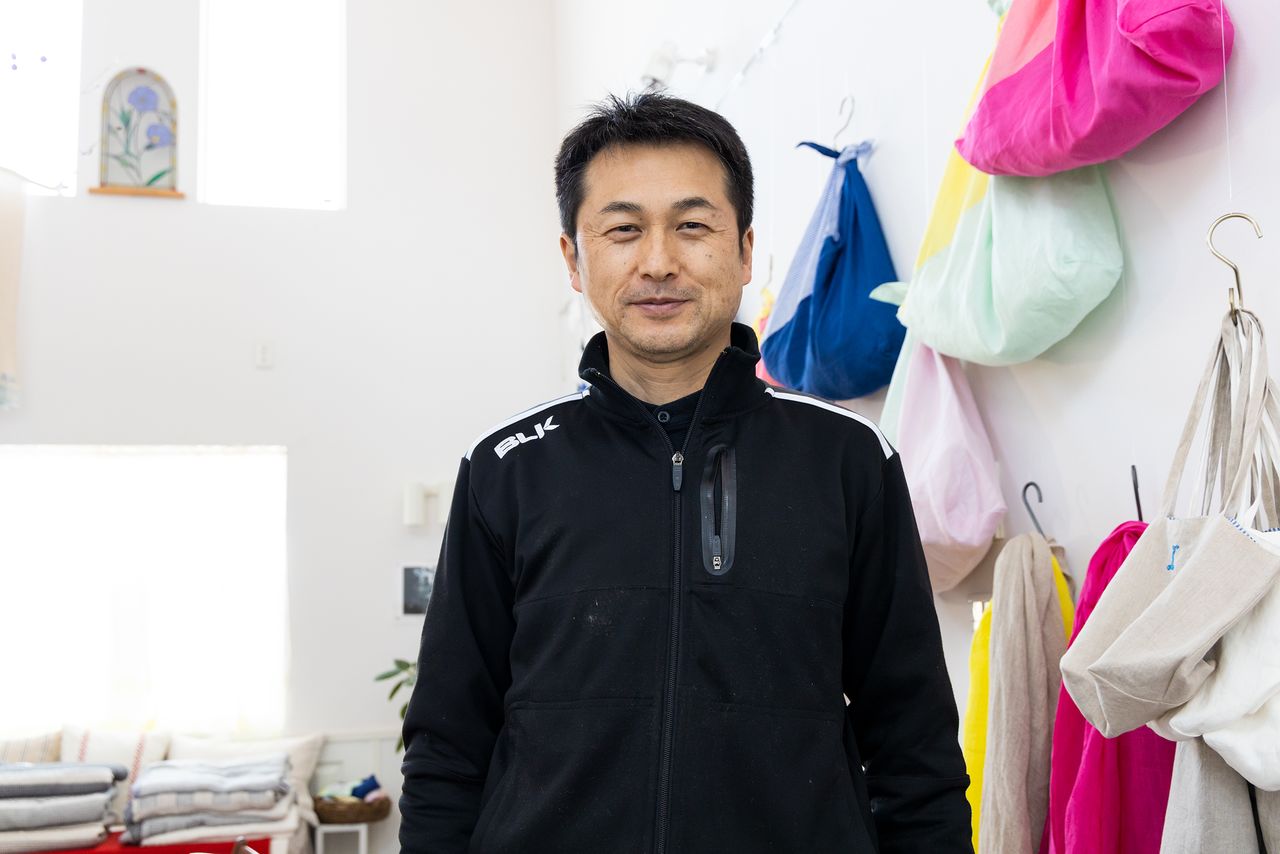 Tenjin Factory’s Kobayashi is proud of his linen products. 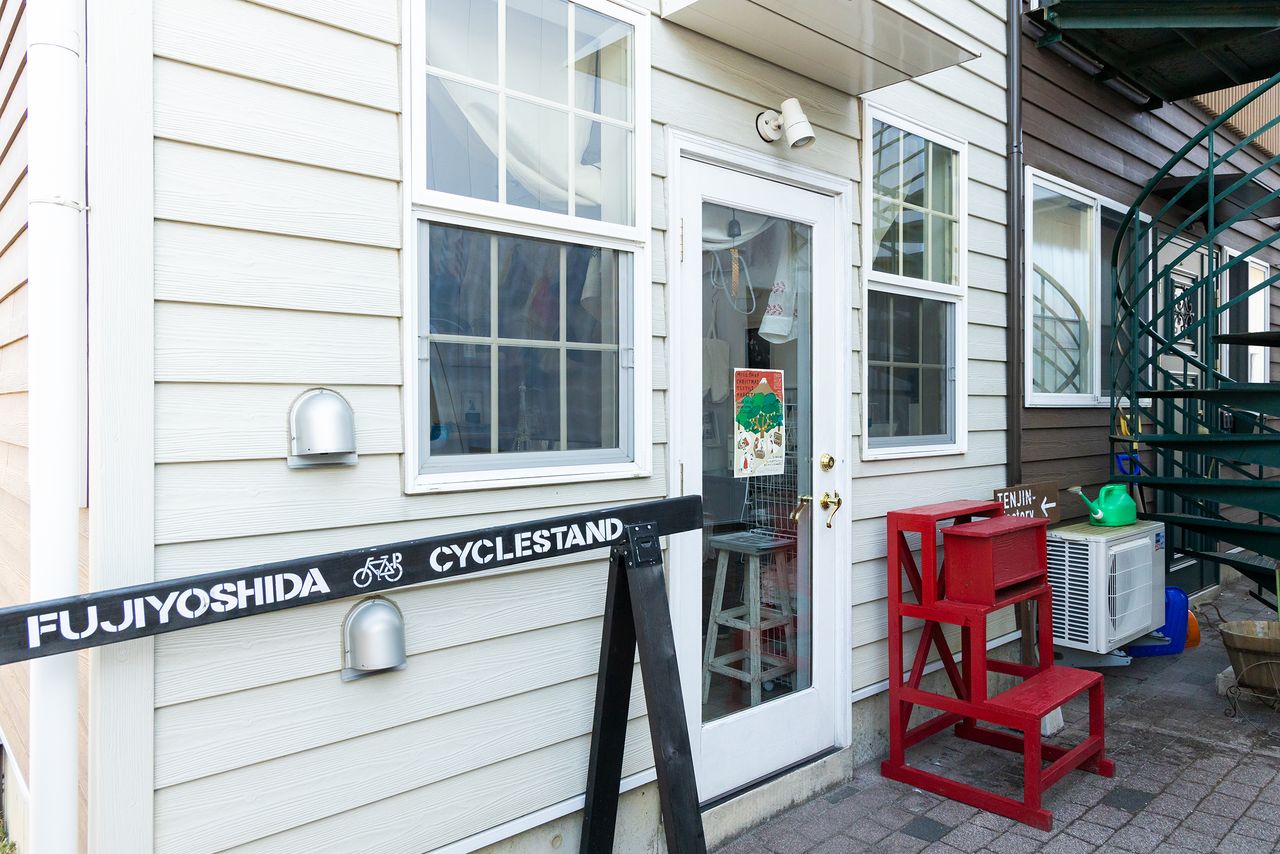 The Tenjin Factory shop. Cycling is a great way to see the town, and many businesses provide bike stands outside their shops.

Fujiyoshida holds a textile festival every October that attracts exhibitors from all over the country. Along with displays of wares, there are events like hands-on weaving sessions, demonstrations, and shows with live presenters to highlight the appeal of Fujiyoshida and its textiles.

Fuji Textile Week 2021, from December 2021 to January 2022, explored new possibilities for textiles and the city through fabric art installations at several locations along Honmachi-dōri and elsewhere in the city. Organizers foresee that this kind of event will gradually help make Fujiyoshida known for its textiles once again. 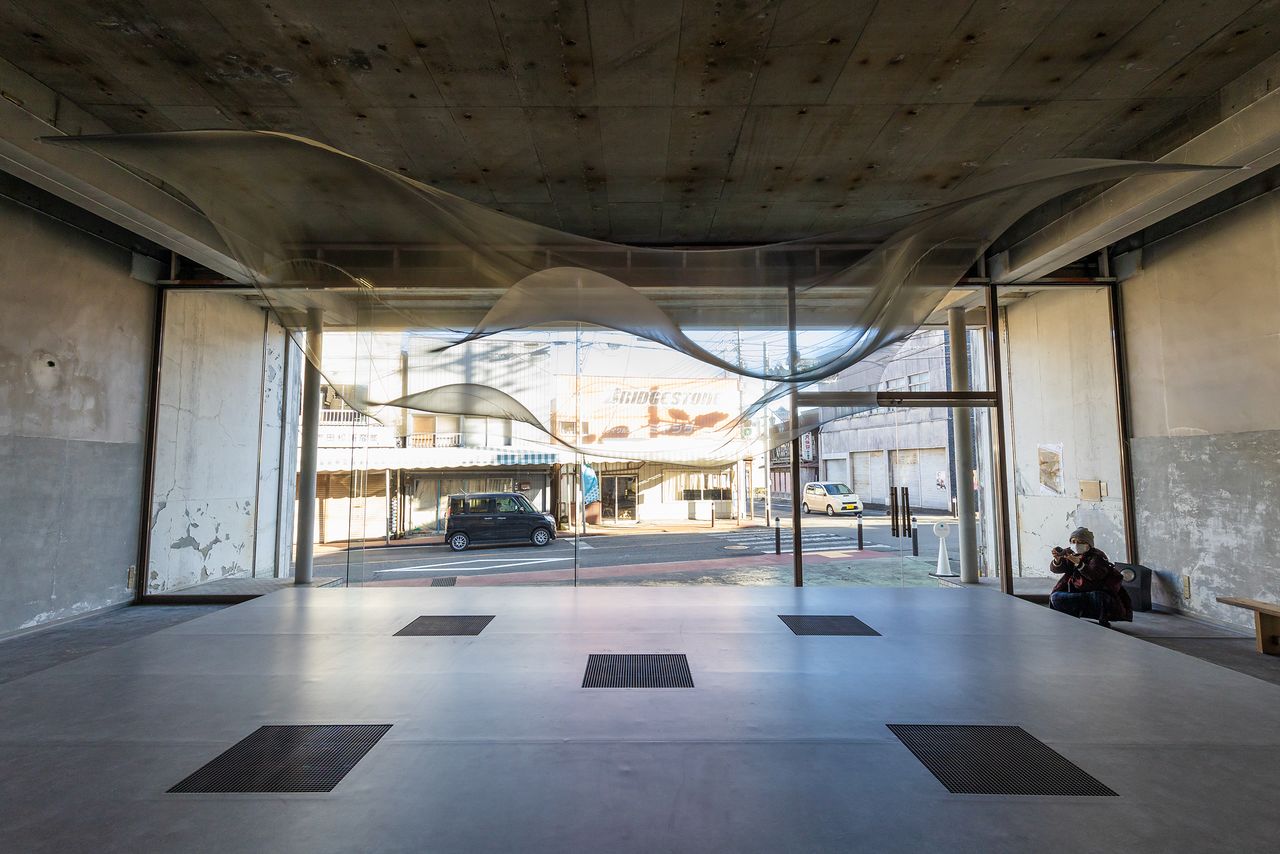 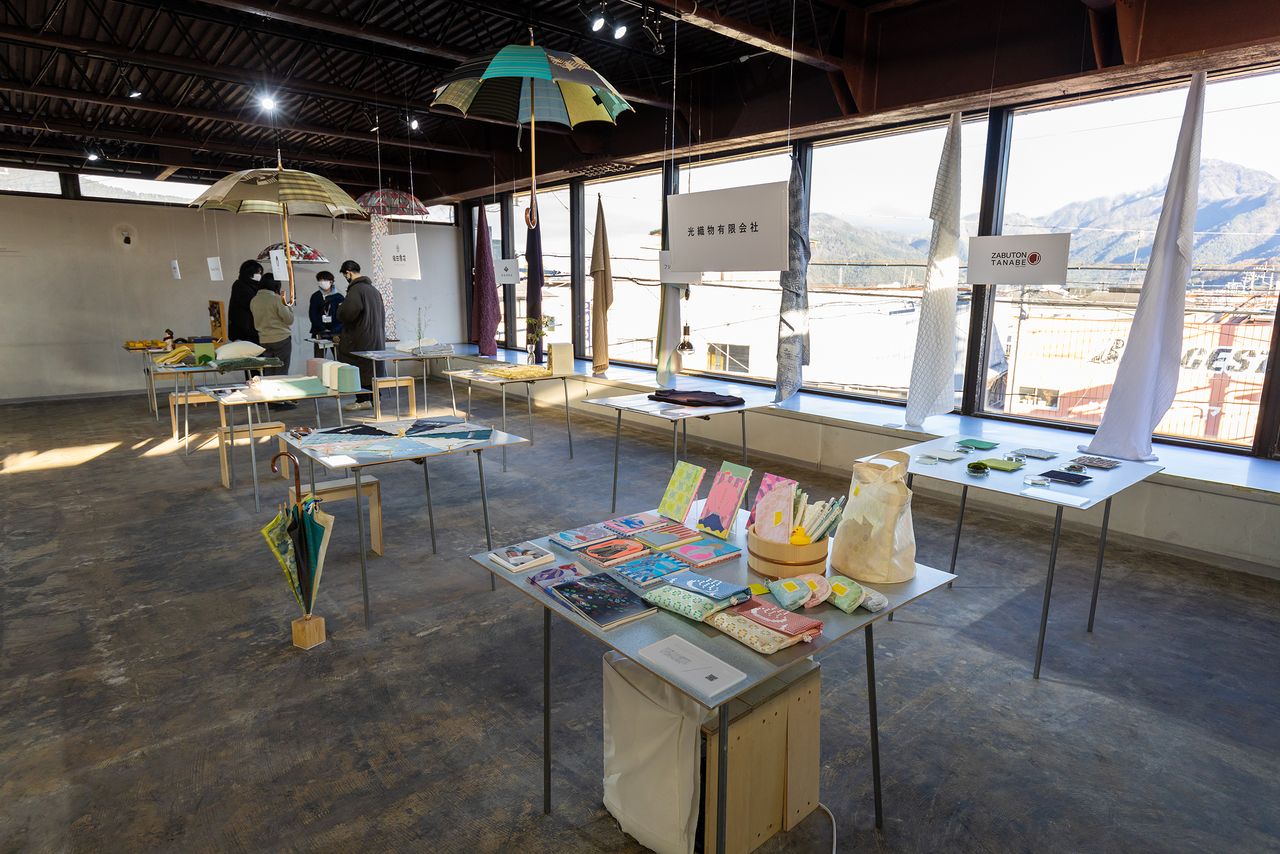 Fabrics and products from Fujiyoshida textile makers were also on display at the event.

Visitors to the area can also enjoy the local treat Yoshida udon. The thick, extra-chewy wheat noodles have a connection with the textile industry. In the past, many of the loom operators in textile factories were women. Men were in charge of preparing the noon meal, and to ensure that workers had enough sustenance to last until evening, they kneaded the udon dough to make chewy, filling noodles.

Walking through the city’s streets and sampling a bowl of Yoshida udon are surefire ways of getting to know Fujiyoshida and its mainstay industry better, and of appreciating the bounty that Mount Fuji has bestowed. 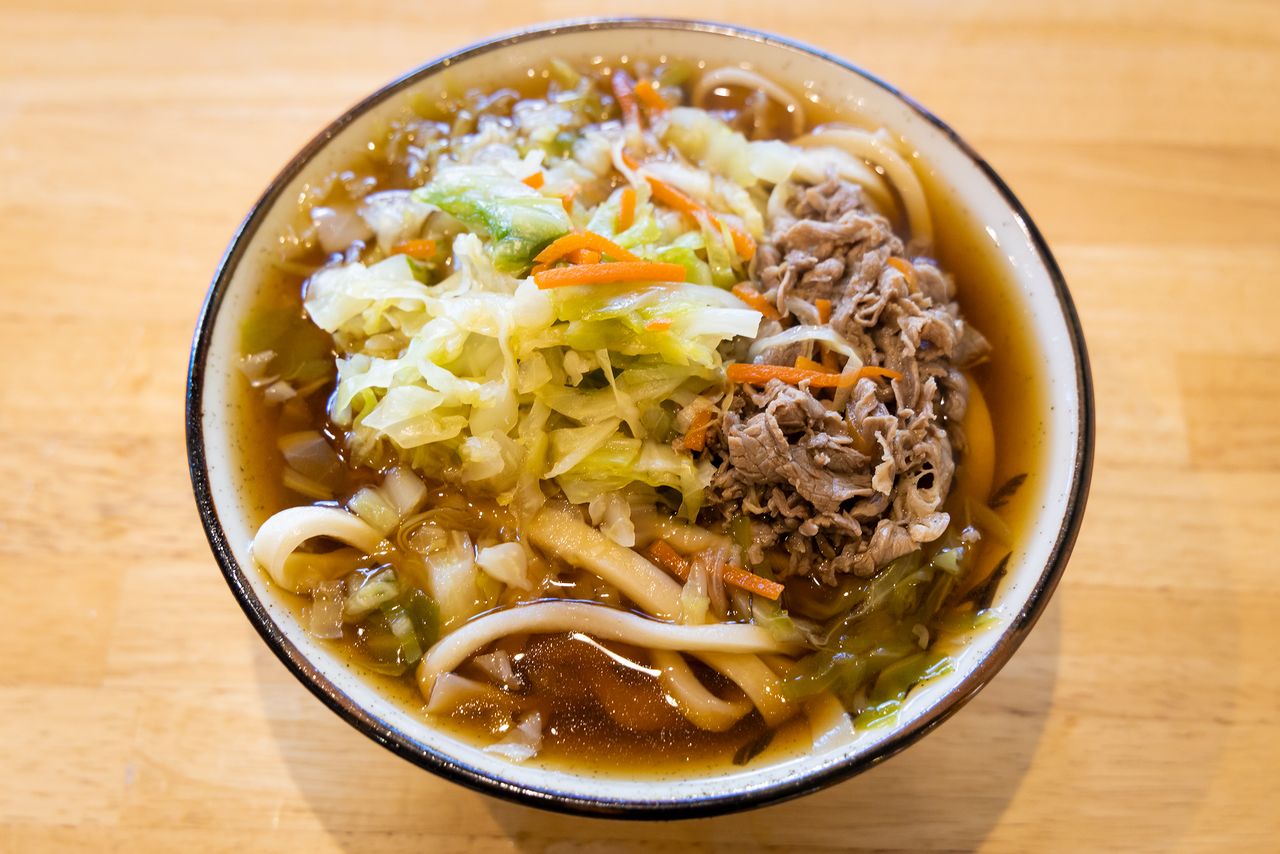 The typical Yoshida udon is topped with horsemeat and boiled cabbage and accompanied by a spicy paste seasoning. Extra-chewy udon in dipping sauce is also popular.