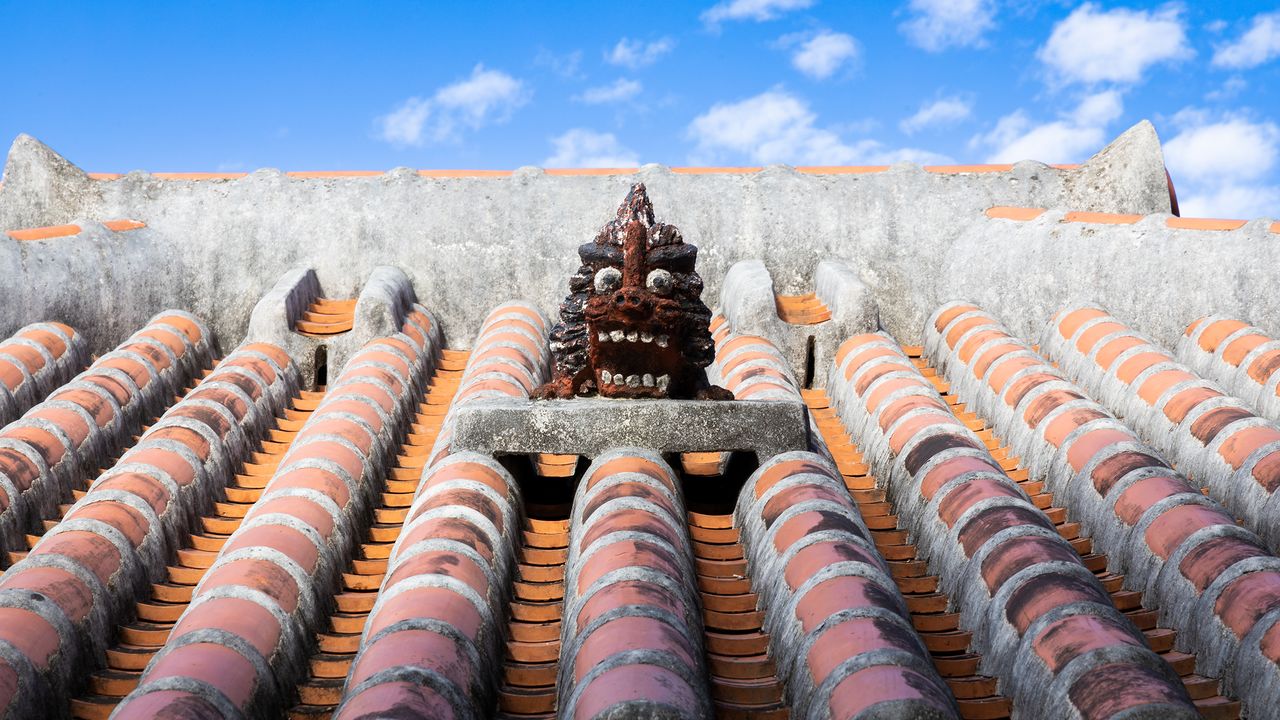 Culture Travel Mar 11, 2022
Okinawa’s shīsā are easily recognized by their distinct lion-like appearance. The fierce-looking figures adorn rooftops throughout the prefecture and are popular souvenirs for travelers, particularly adorable versions designed with large, round eyes and gaping mouths. This article looks at the history and characteristics of shīsā and the different roles they play.

In Okinawa, shīsā are everywhere. Resembling exotic lions, they adorn building entrances and stand guard atop roof eaves. Although the figures have long been part of the unique culture of the Ryūkyū Islands, their status as folk items is relatively new, with shīsā having first been adopted as home ornaments in the late nineteenth century. 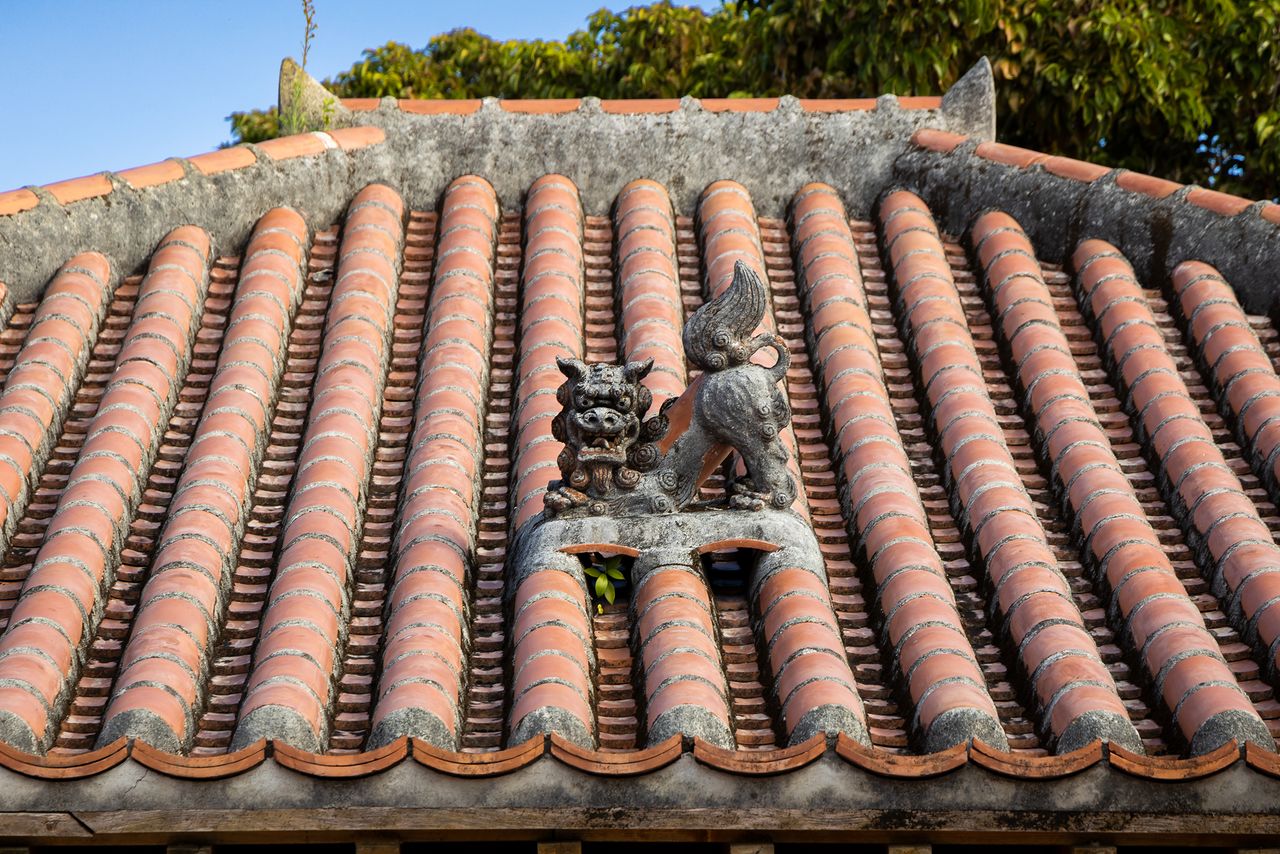 Traditional-style Okinawan homes have distinctive, red-tiled roofs. However, according to Sakai Wakaba, curator at the Okinawa Culture Center, the rulers of the Ryūkyū Kingdom for generations in fact forbade tiled roofs. The style grew in popularity only after authorities annulled this regulation in 1889. Builders used leftover tiles and plaster to craft shīsā for rooftops, leading to their spread on ordinary homes.

The Okinawa Culture Center is part of the Ryūkyū Kingdom Castle Town area of the tourist theme park Okinawa World in Nanjō. The center features displays of shīsā made by renowned artisans along with lion statues from abroad that are the forebears of the popular figures. The center is a red-tiled house built over 100 years ago, making it the perfect setting to learn about shīsā. 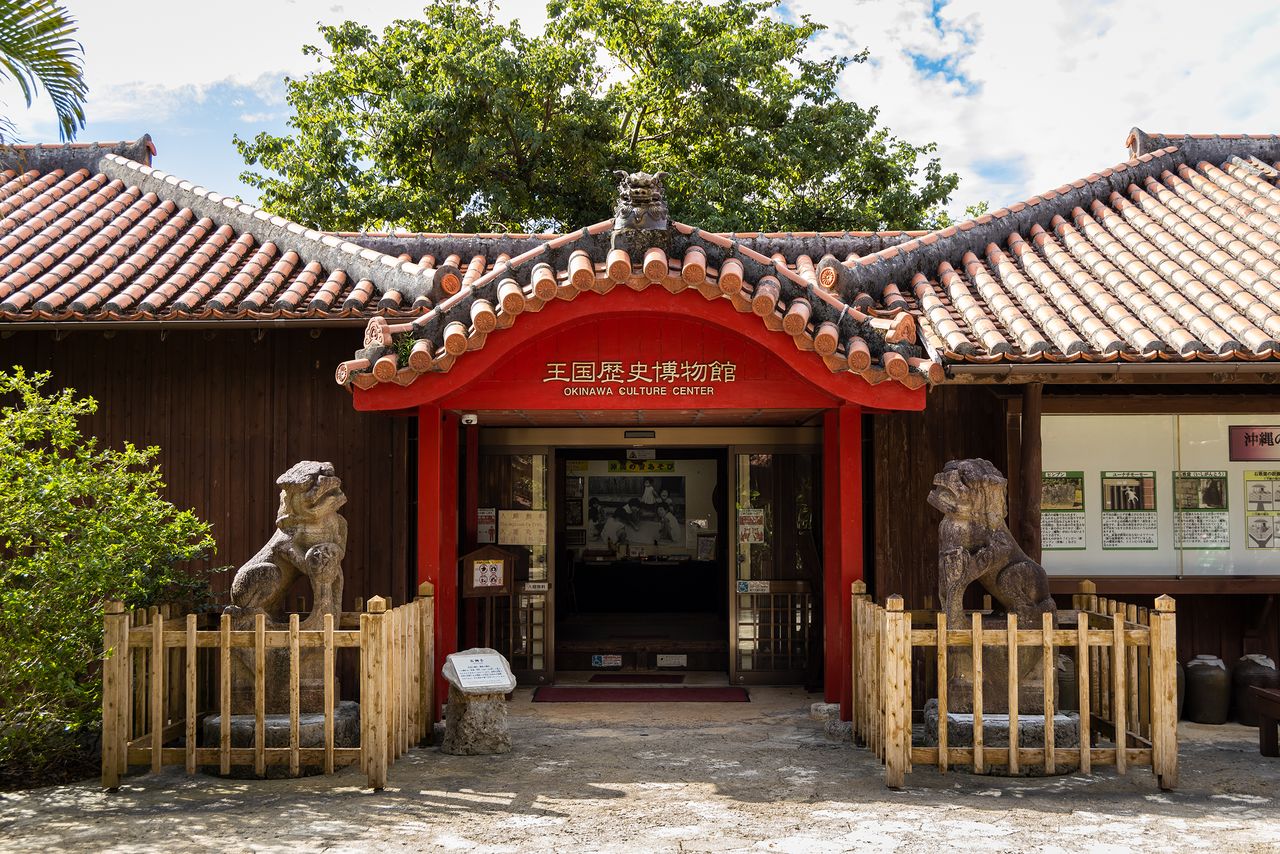 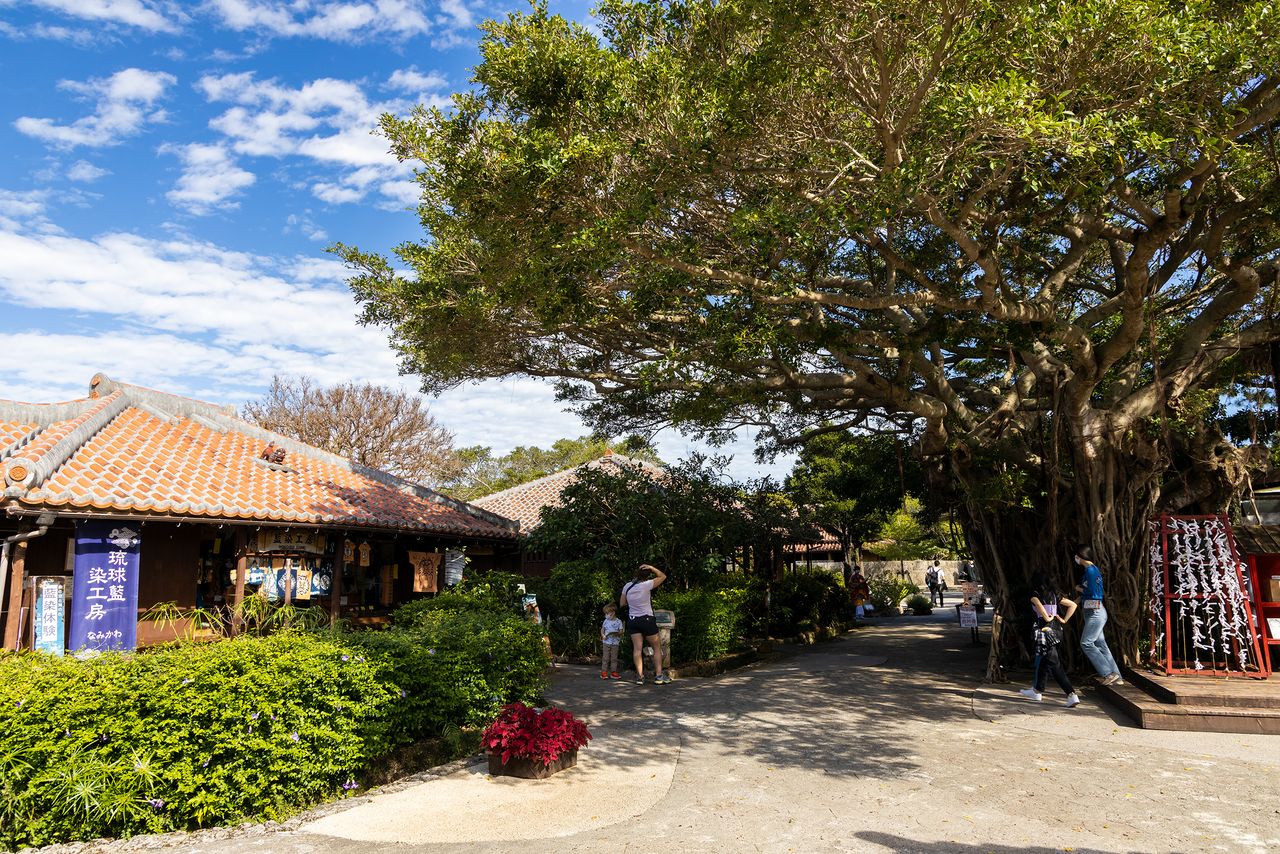 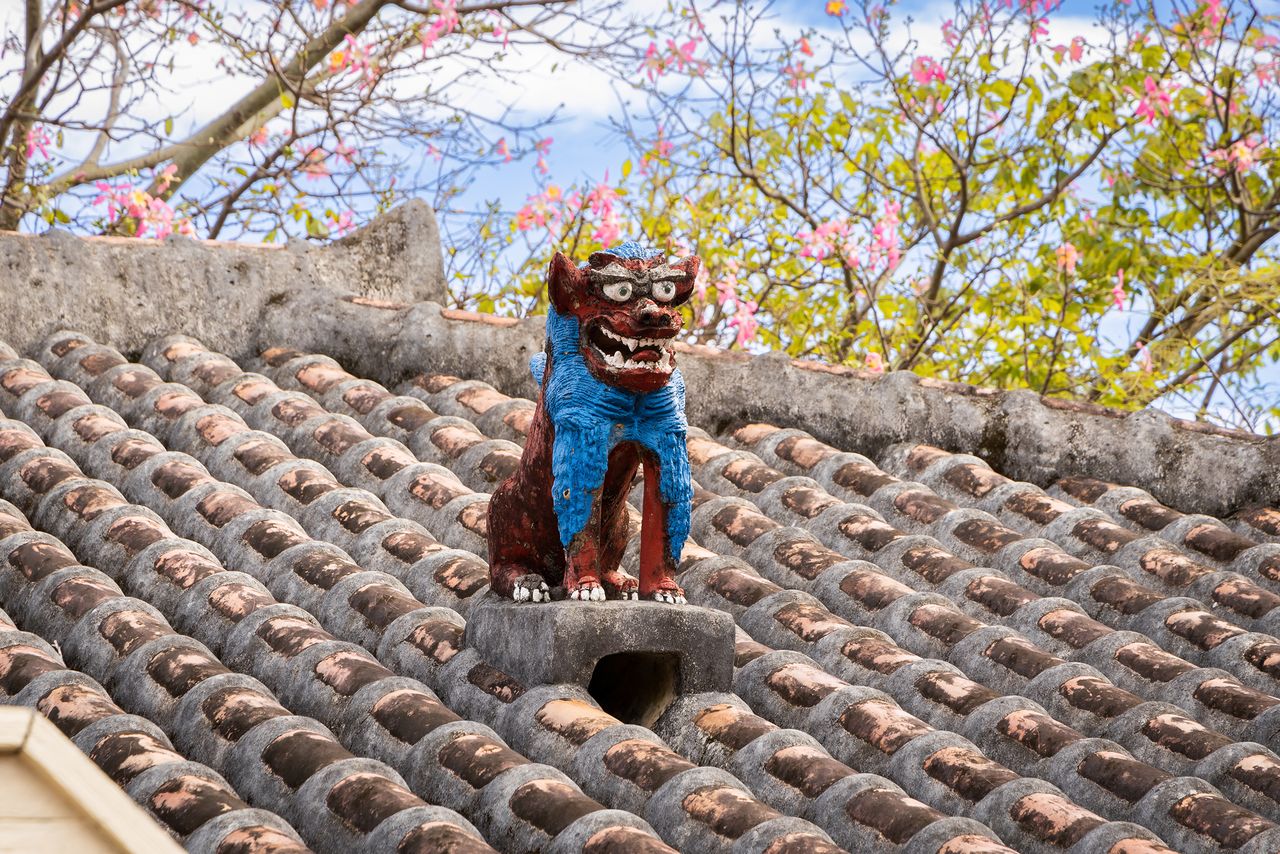 A ceramic shīsā. Each figure displays its own character and charm.

Shīsā are thought to have their origins in ancient Chinese lion statues. Long ago in Egypt and the Middle East, lions were considered holy, their strength and fierceness symbolizing the power of rulers. Images of lions decorated palaces and temples. The most famous is the Great Sphinx of Giza, with the body of a lion and a human head.

Lion statues gradually transformed as images of the beasts moved eastward along the Silk Road. When figures spread in places where lions were unknown, they came to be mythical, sacred creatures or deities to ward off evil. According to Sakai, some Okinawans are still uncertain whether shīsā are cats or more like their cousins, komainu, the guardian lion-dogs found at Shintō shrines in mainland Japan. Although both originated in China, komainu entered Japan via the Korean Peninsula.

In the north of Okinawa and the Yaeyama Islands, shīsā are known as shīshī. The word is often described as a corruption of the old Japanese term for lion, shishi. However, the name of the animals was actually introduced to Okinawa directly from China, where it is pronounced “shizi,” and it is more likely that this pronunciation evolved into the modern shīsā, or that the Chinese characters were simply read that way.

Sakai further explains that while many people emphasize the first syllable, shīsā is pronounced without an accent in Okinawa. Tourists often pronounce it “Caesar,” like the ancient Roman general, much to the chagrin of locals. 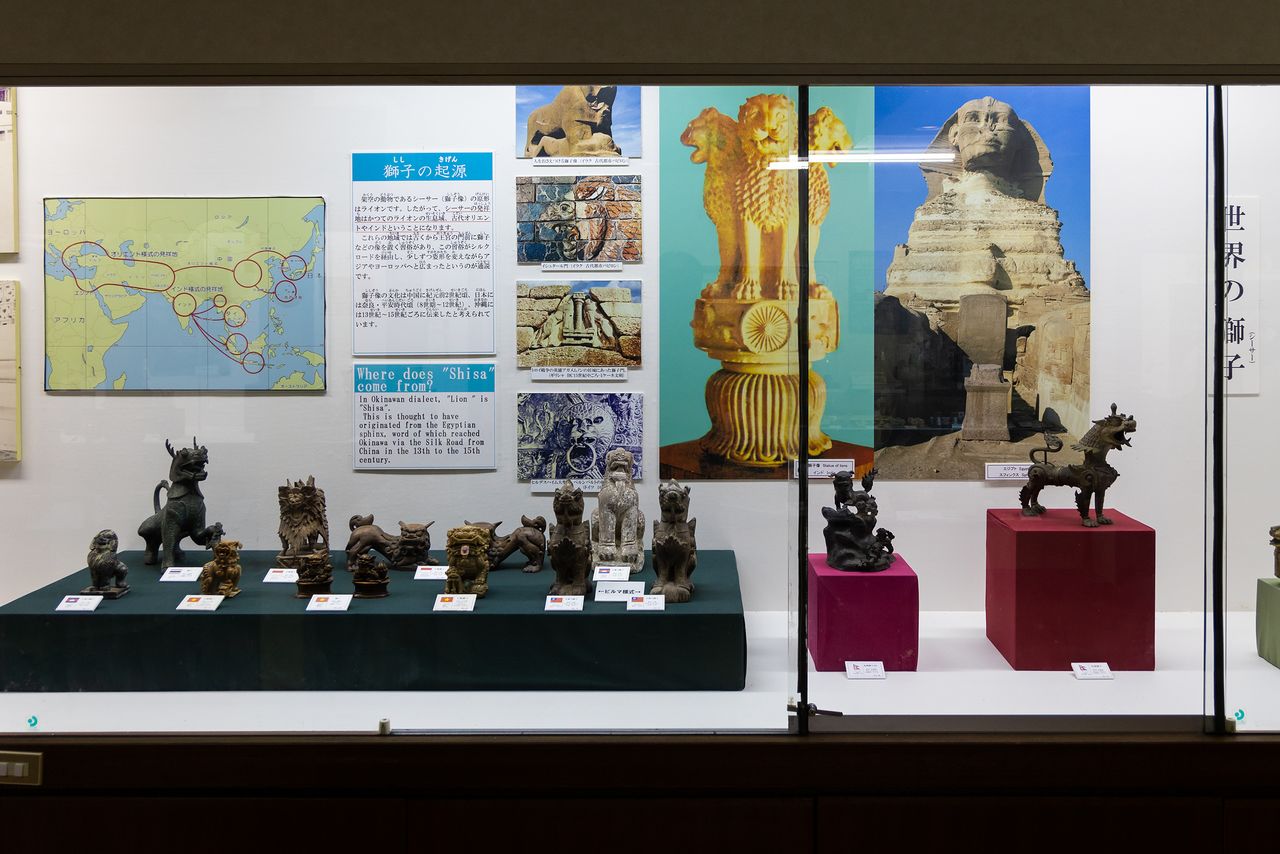 A display at the Okinawa Culture Center. 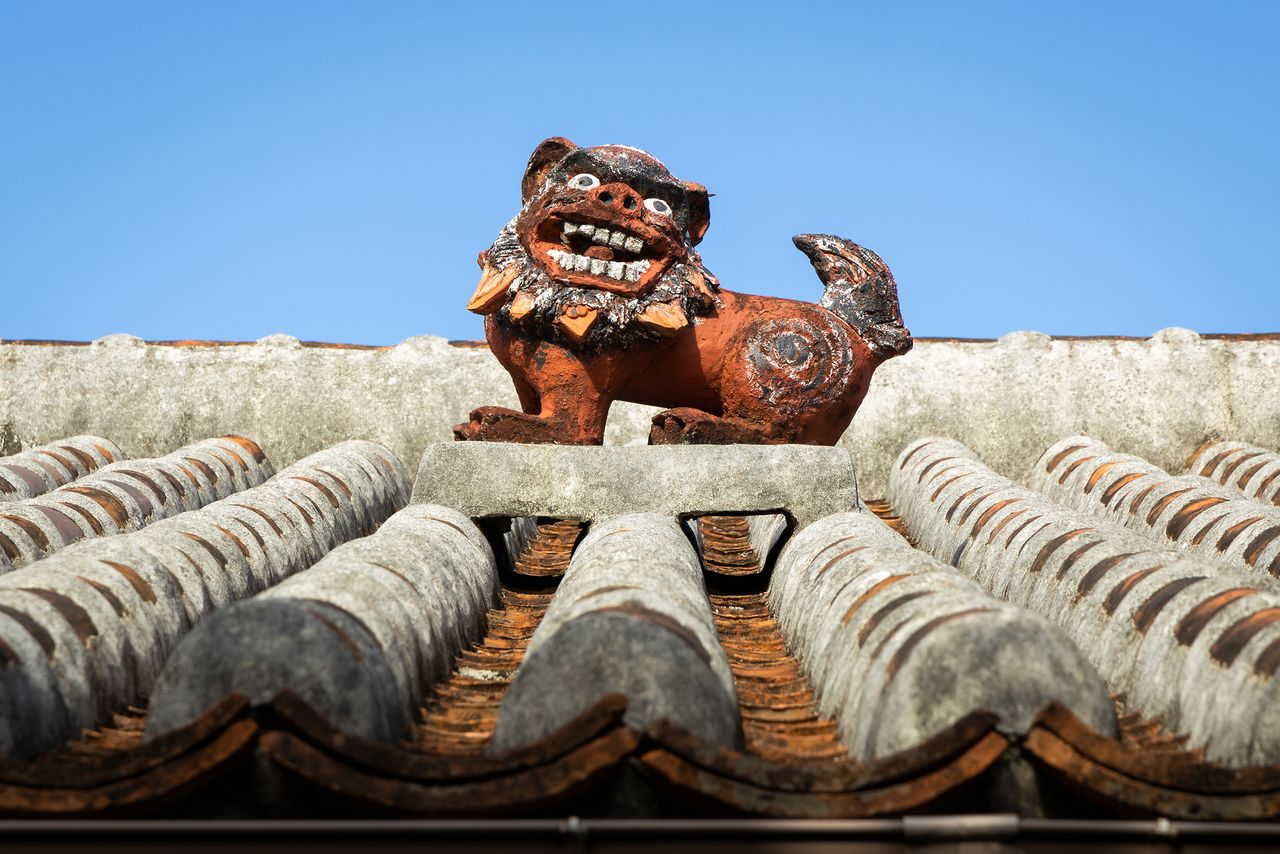 A second category is murajishi, or “town lions,” erected at the entrance to villages and on hilltops to ward off evil and to protect against fires. The oldest recorded murajishi is in Tomori in the town of Yaese on the main island of Okinawa. Legend recounts that Tomori was plagued by fires. Bewildered as to the cause, villagers sought the guidance of a diviner, who attributed nearby Mount Yaese as the source of the conflagrations and instructed residents to erect a stone lion facing the mountain. It is purported that the fires ceased thereafter.

This southern part of Okinawa saw fierce fighting during World War II. In the Okinawa Culture Center, there is a photo taken during the Battle of Okinawa showing US soldiers hiding behind the stone lion of Tomori and observing the surroundings through binoculars. This stone deity, which protected the village from calamity, also provided the invaders protection from gunfire. The statue is riddled with bullet holes, standing as a testament both to Okinawa’s ancient culture and the ferocity of the war. 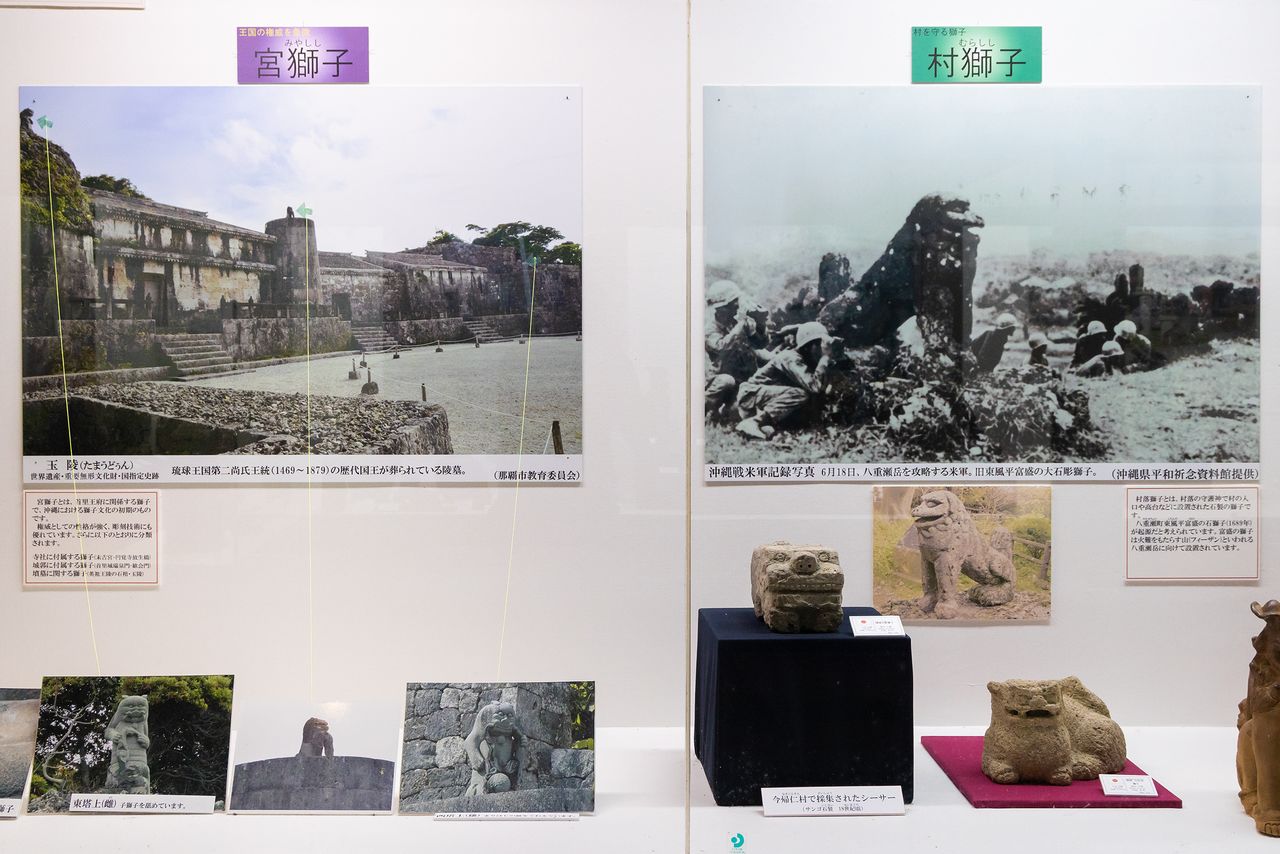 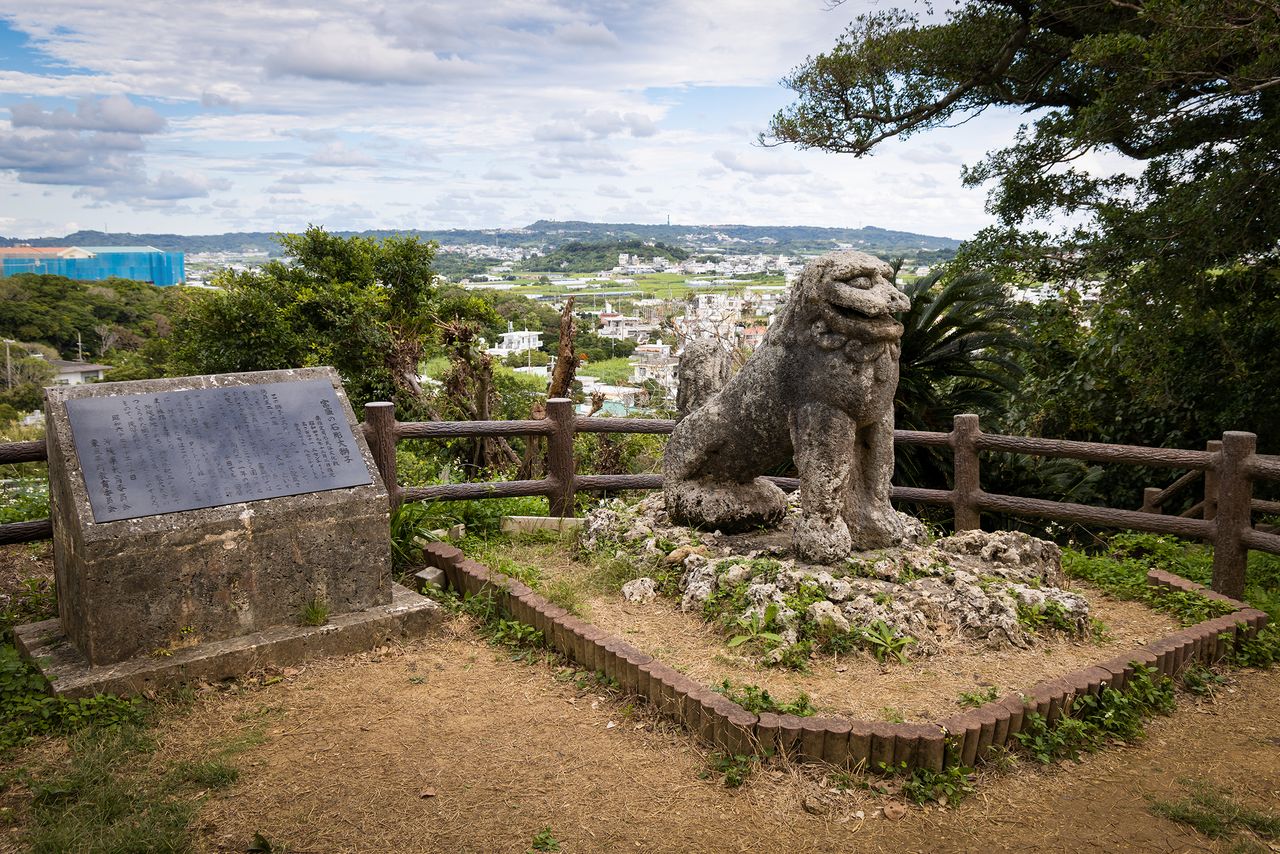 The stone lion of Tomori stands near the ruins of the castle Jirigusuku. 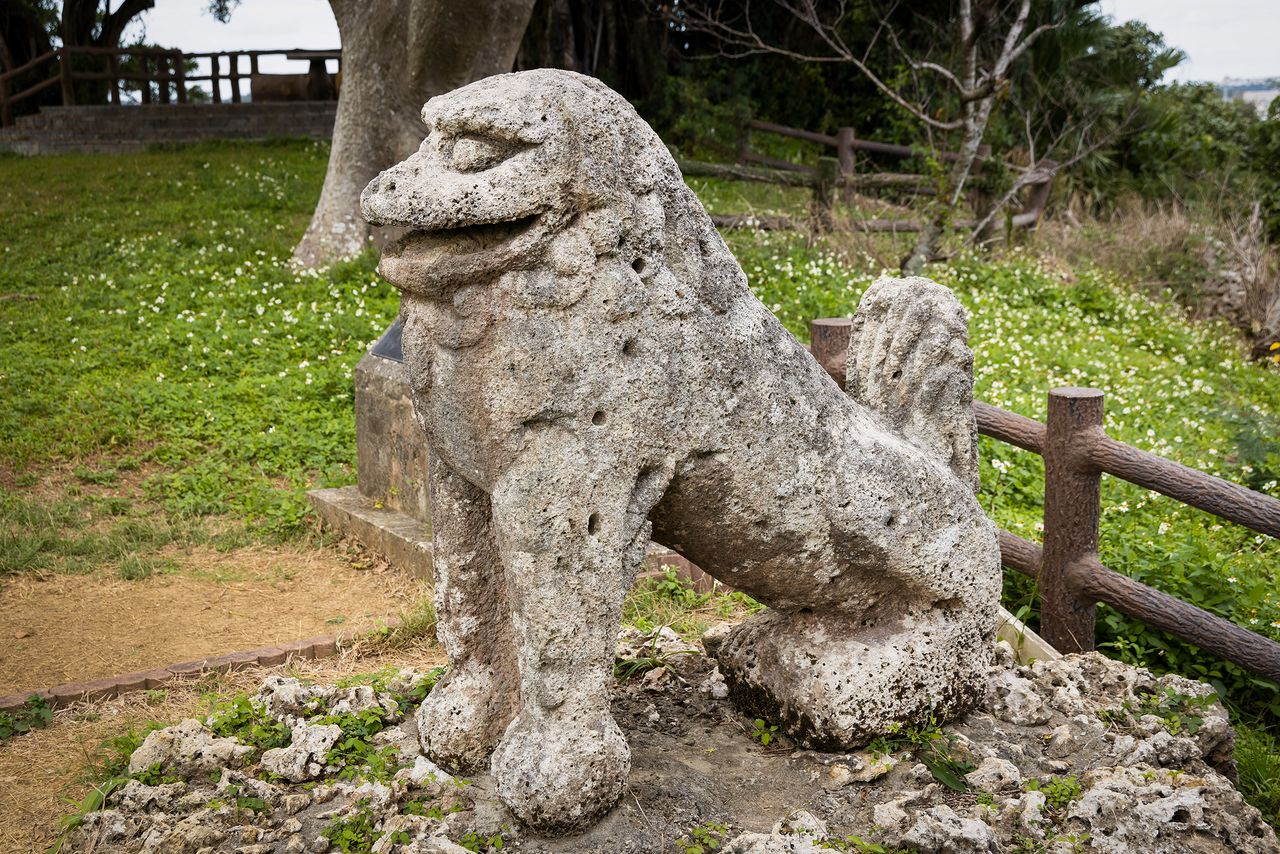 With the introduction of village lions, faith in shīsā spread among the population, leading to popularization of ieshishi, or “house lions,” during the Meiji era (1868–1912). These are commonly placed on rooftops, gate pillars, or close to the entrances of homes, their scowling visages warding off evil. Now that more people live in apartment buildings, smaller shīsā for inside the home are increasingly popular.

According to Sakai, Okinawa’s tourism boom has led to shīsā being adopted as a mascot character. The angry countenance of the traditional shīsā is now often replaced with a grin. The figures are popular souvenirs and come in a range of colors and designs. 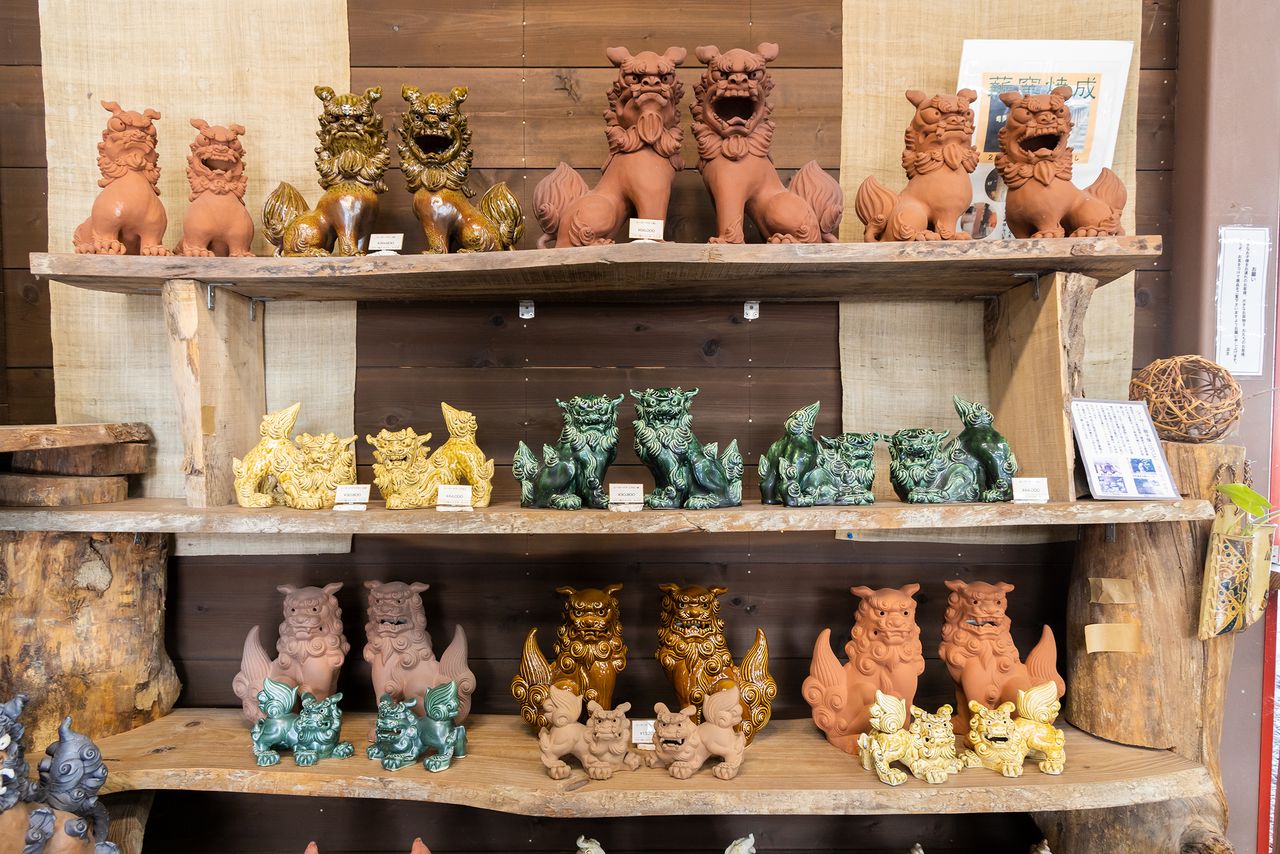 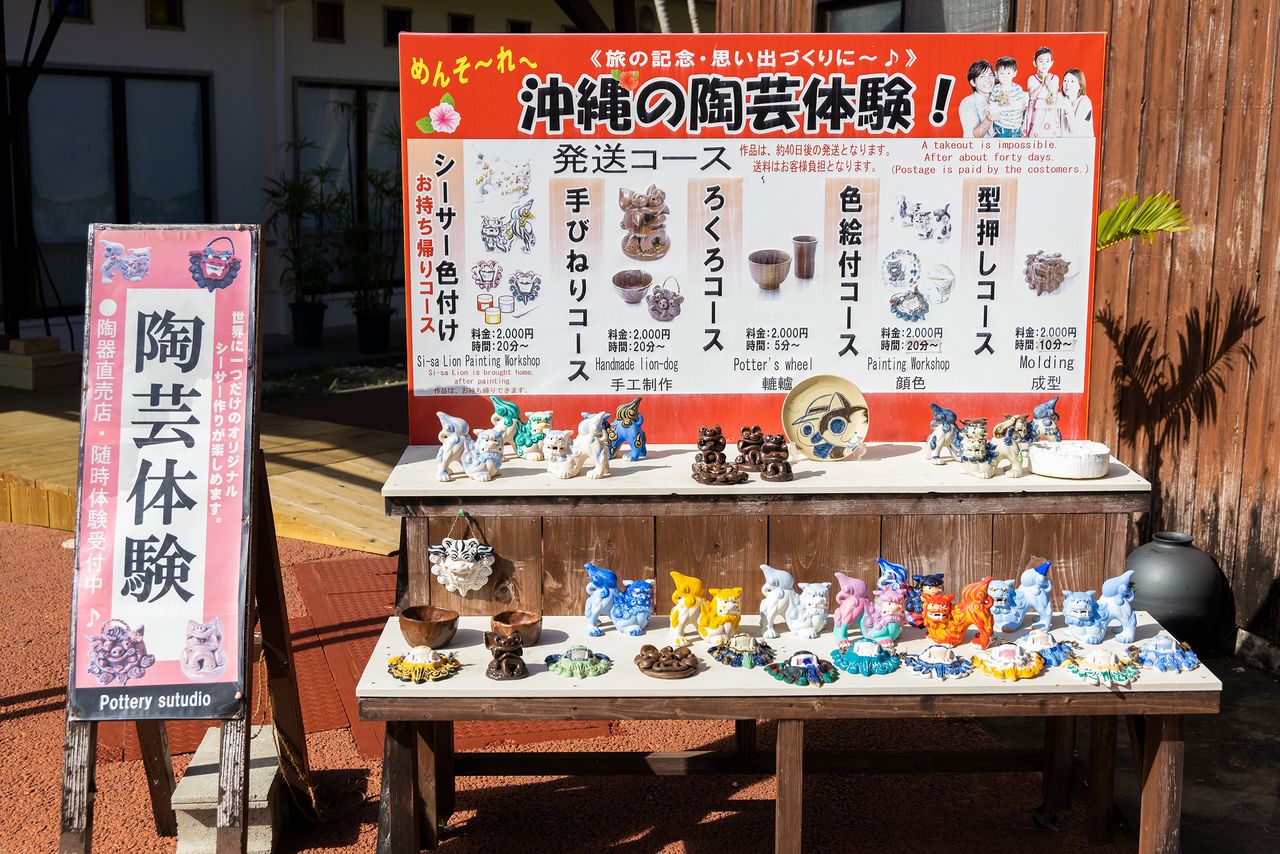 The theme park offers a pottery experience, where visitors can make their own shīsā.

Often, a pair of shīsā are placed on either side of a gateway, one with its mouth open and the other with its mouth shut. As with komainu, open-mouthed beast are purported to be male, and the closed-mouth indicates the female. Also, the open mouth is pronouncing the first letter of the Sanskrit alphabet, “a”, and the closed one the last letter, “un,” together representing the beginning and end of all things.

However, Sakai explains that shīsā can come individually or in pairs, and they are not necessarily male or female. Lion statues in China are often paired, and both usually have open mouths. Even if one has a closed mouth, in China, the male holds a jewel, representing treasure, and the female holds its cub. 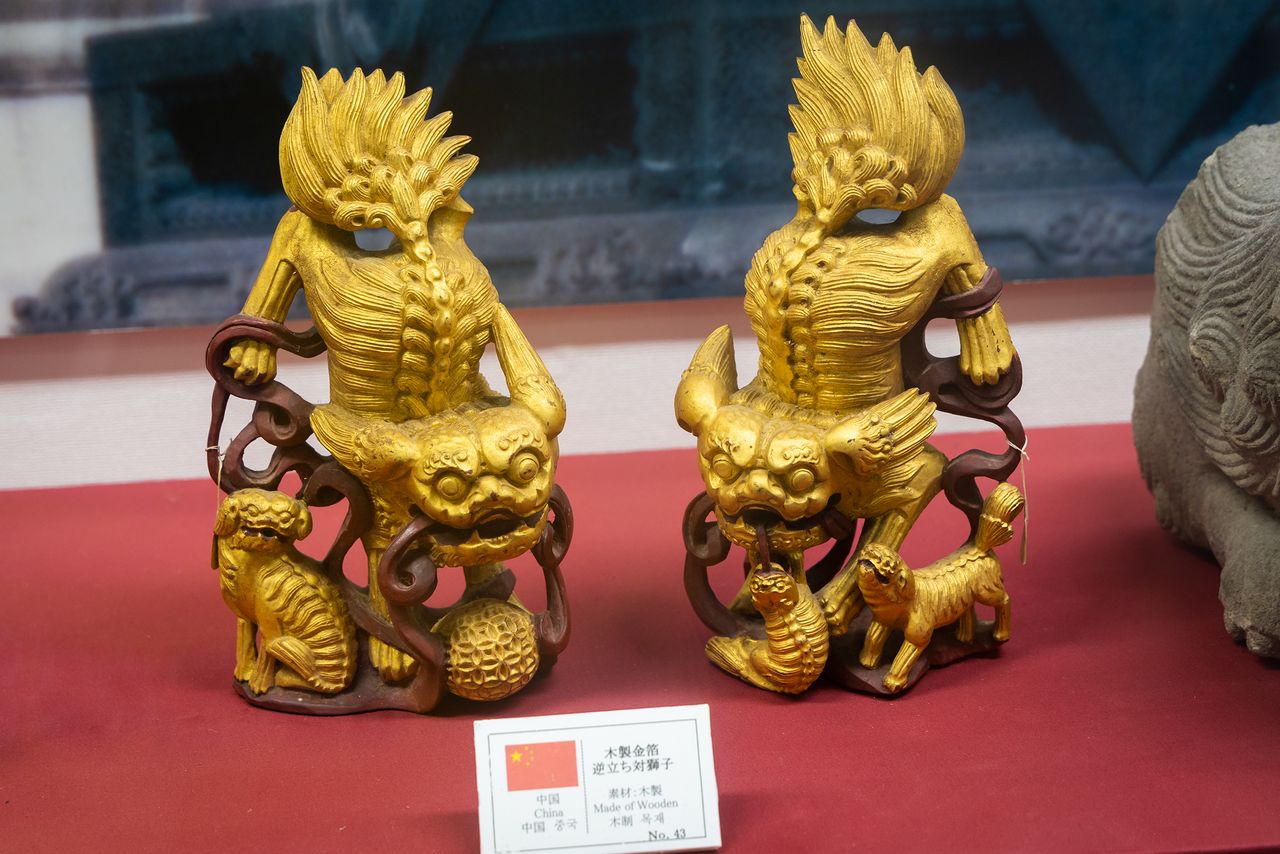 A pair of lion figures from China, both with their mouths open. The figurine on the left is male, indicated by the jewel it holds, and the female is on the right, holding its cub.

Ryūkyū shīsā originated from China, and individual figure are usually open-mouthed. Trying to distinguish male and female is often a fruitless task. In nature, only male lions have manes, but all shīsā boast this feature, a characteristic attributable to ancient people in Okinawa having never seen a real lion. Sakai explains it is only natural to consider that these guardian deities transcend gender. 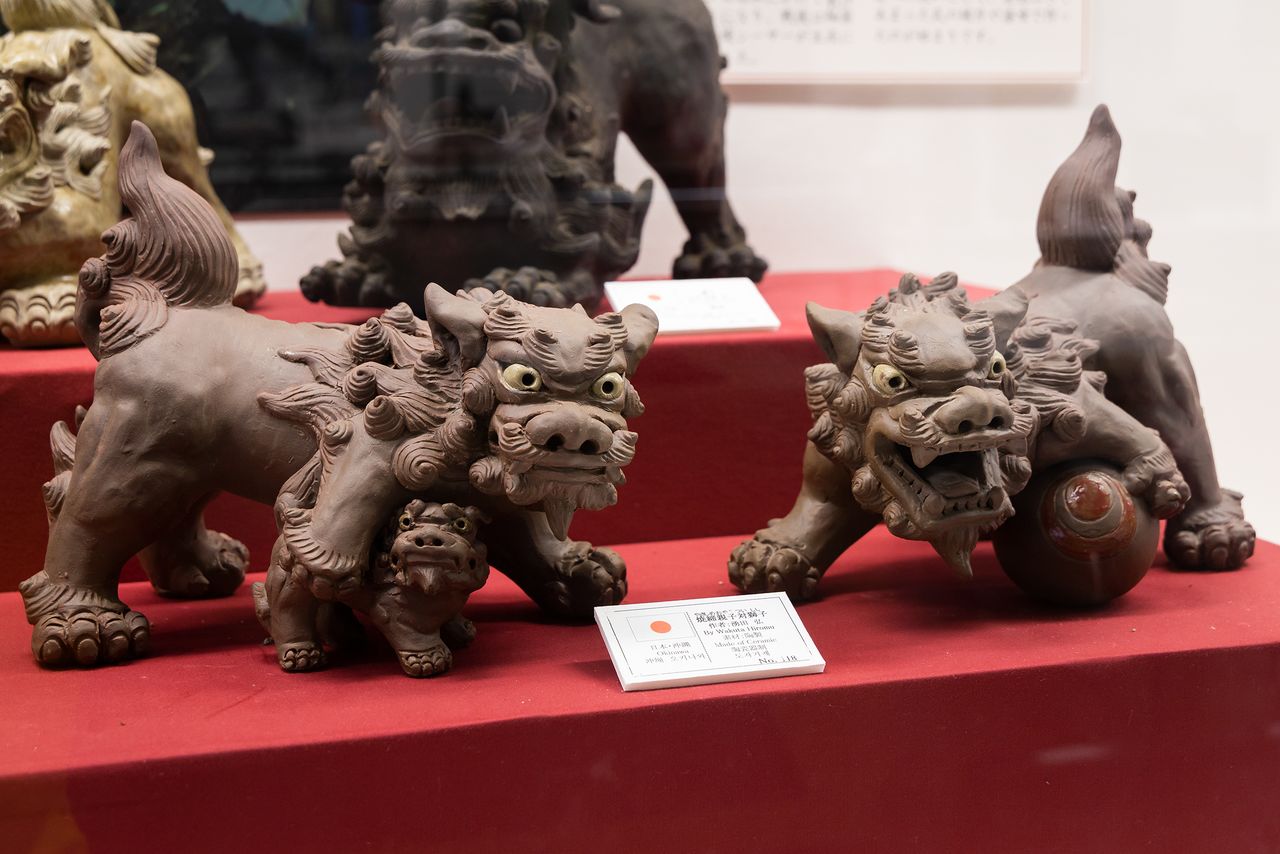 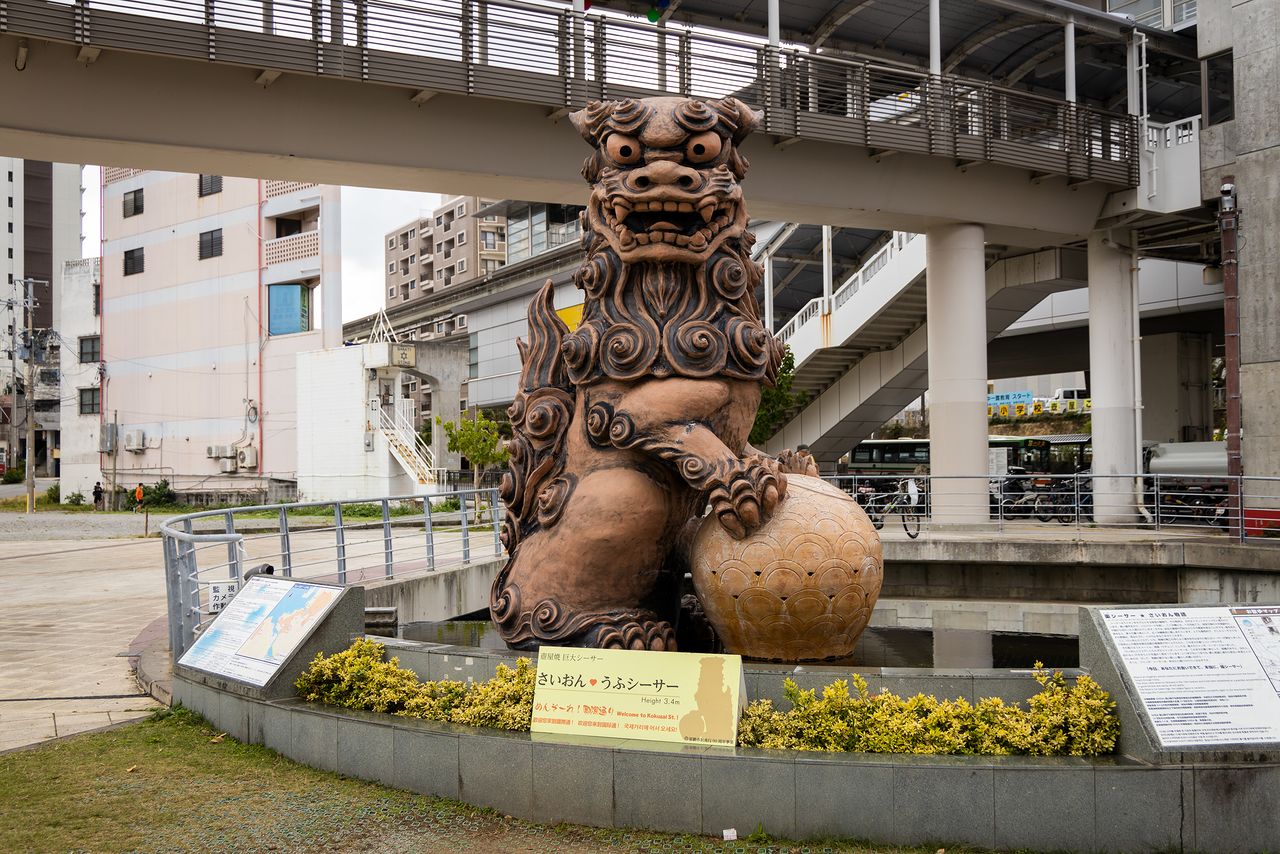 The giant Tsuboya-ware shīsā near Makishi Station of Okinawa’s Yui Rail in Naha holds a jewel.

Visitors to Okinawa can enjoy hunting for unique and unusual shīsā, of which there are plenty. Shishiku-no-Tō, a monument featuring five large lion statues at the entrance to Okinawa World, is one such location.

Another famous shīsā is the giant lion statue at Zanpa, some 35 kilometers north of Naha. This is the largest shīsā in Okinawa, measuring 8.75 meters in height and 7.8 meters in length. Zanpa is also known for its beach and Cape Zanpa Lighthouse, making it a pleasant excursion from the capital. 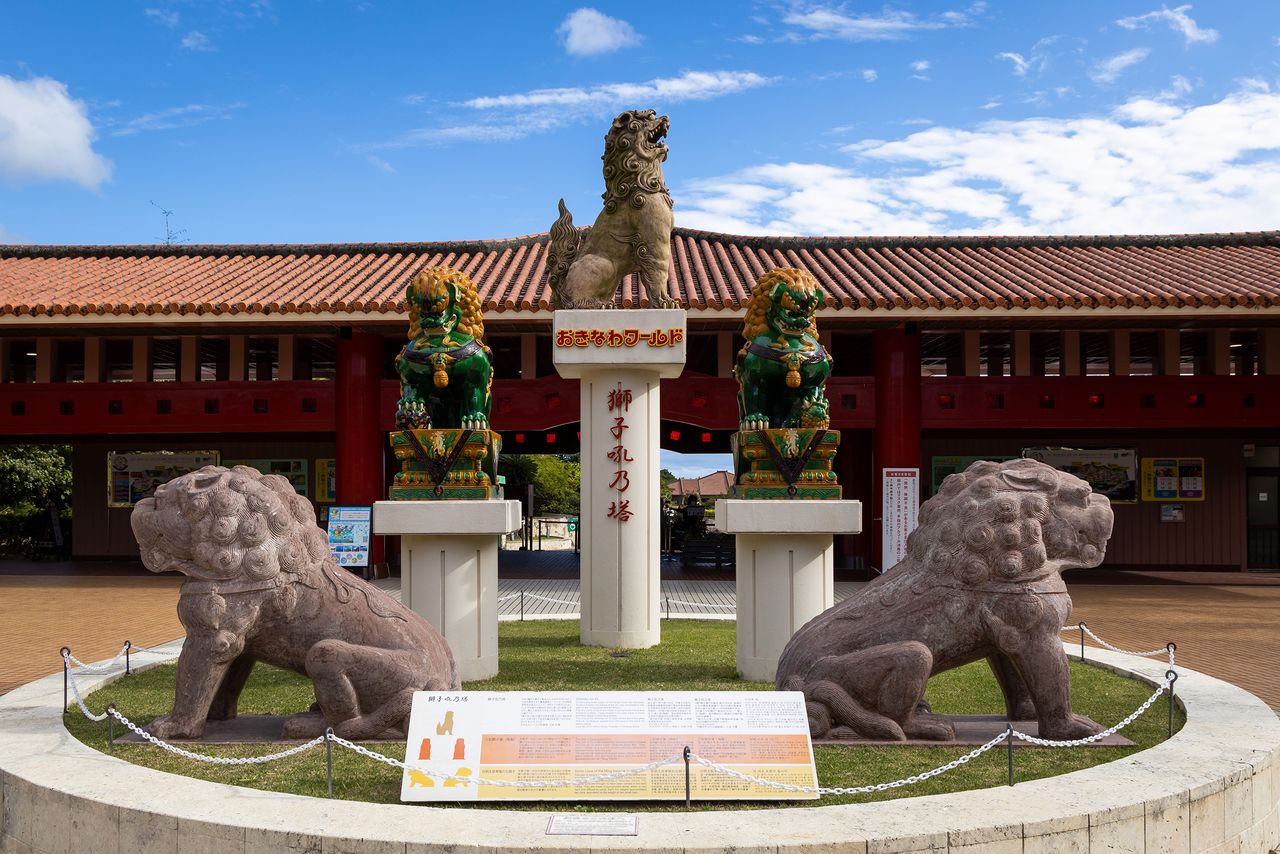 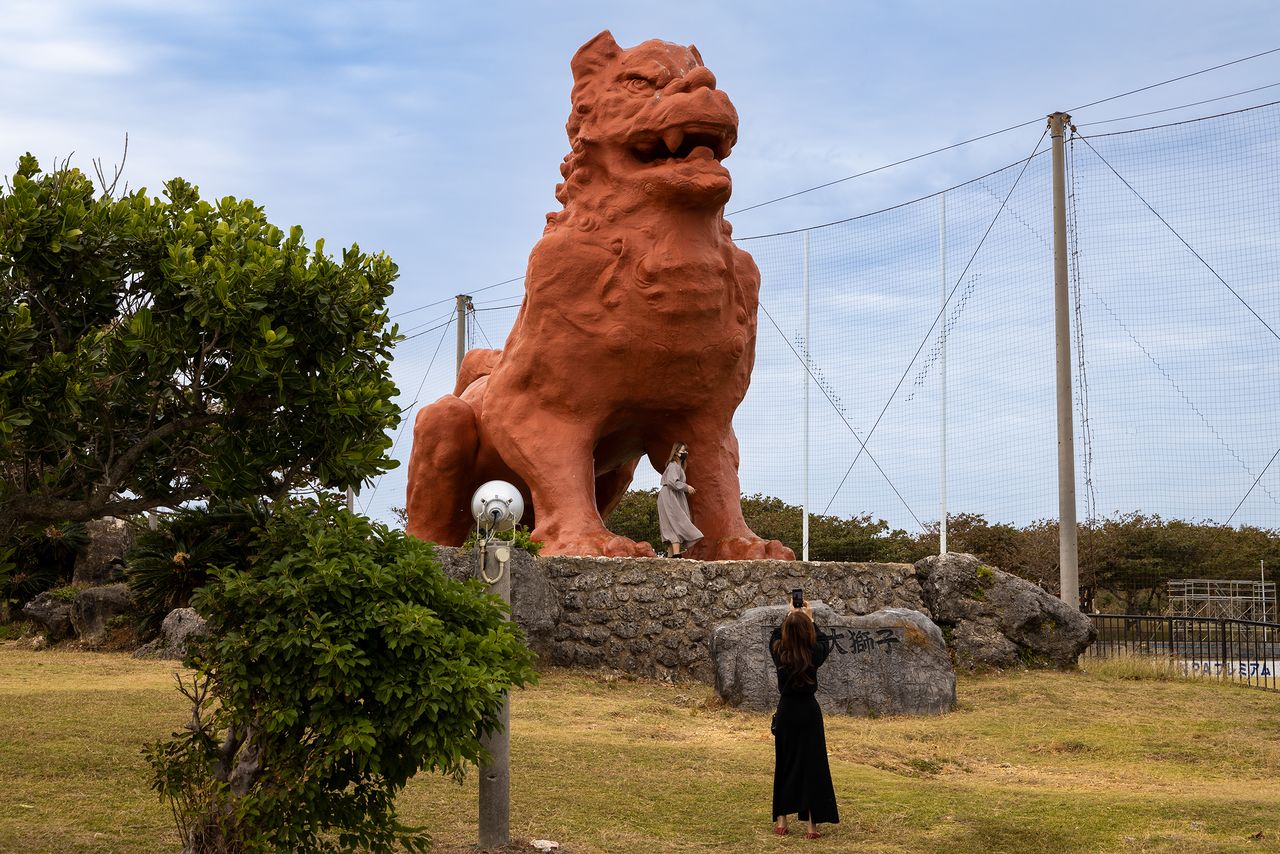 The woman in the foreground gives an idea of the size of the Zanpa shīsā.