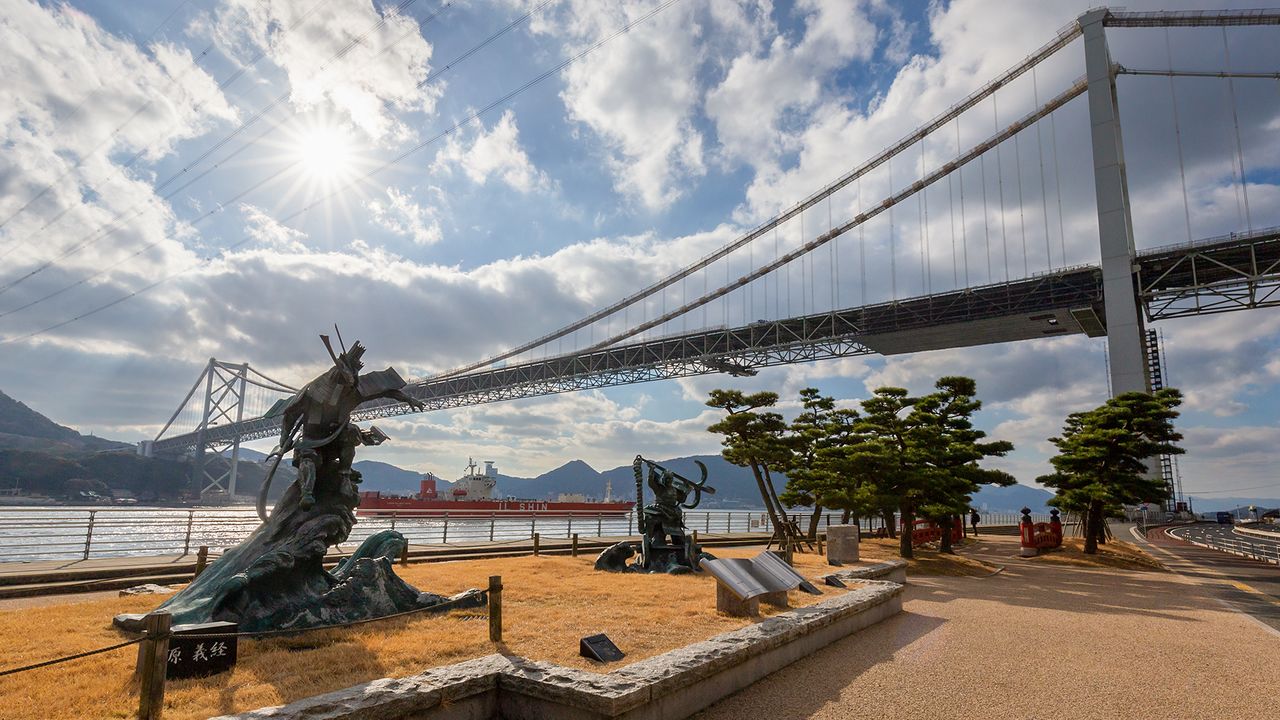 History Travel Mar 18, 2022
Following the six-year long Genpei War, Minamoto no Yoritomo achieved victory, and established his shogunate in Kamakura. The final defeat of the Taira clan came at the Battle of Dannoura, in 1185. We visit the scene of the battle and nearby historical sites, including the important Shintō shrine Akama Jingū.

Perilous Waters of the Kanmon Strait

Dannoura is the famed setting of the final battle in the Genpei War. The name lives on in Dannoura-chō, a suburb of Shimonoseki in Yamaguchi Prefecture, at the northern side of Kanmon Bridge that connects the islands of Honshū and Kyūshū. The area overlooks Hayatomonoseto, the narrowest part of Kanmon Strait. 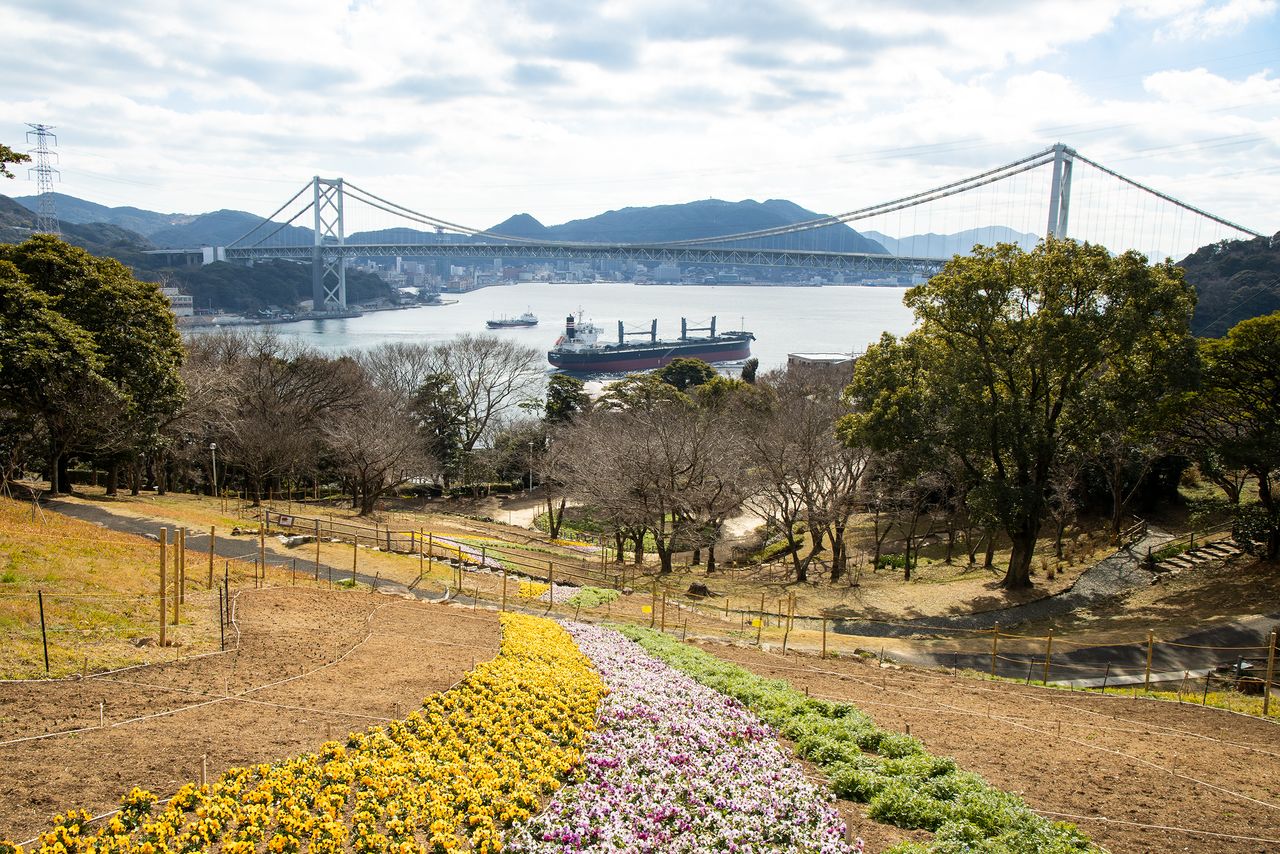 Kanmon Strait viewed from Hinoyama Park. Just 700 meters across the waters is the Mekari area in Kitakyūshū.

The Dannoura battlefield lies in Mimosusogawa Park, adjacent to Dannoura-chō. It features two dramatic statues recreating the events of the battle. The first is of Minamoto no Yoshitsune’s legendary “eight boat leap” to escape the grasping hands of a foe. The other depicts the vanquished Taira no Tomomori holding the anchor he used to drown himself. Alongside is a stone memorial marking the point from where the child Emperor Antoku is believed to have jumped with his grandmother, Taira no Tokiko, into the sea. 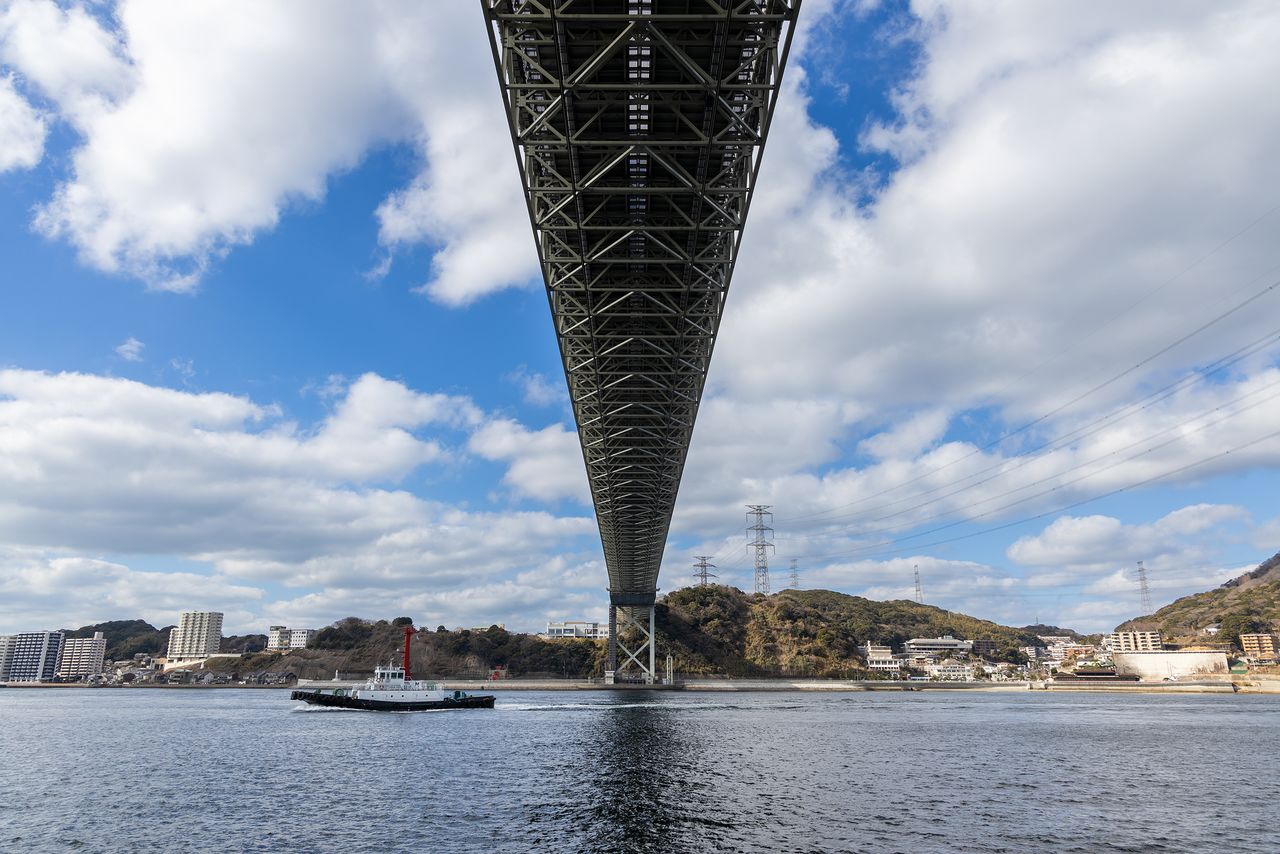 Dannoura-chō viewed from the Kyūshū side of Kanmon Bridge. The buildings to the right are the Mimosusogawa area, where the Dannoura Battlefield and Honshū entrance to the Kanmon Pedestrian Tunnel are located. 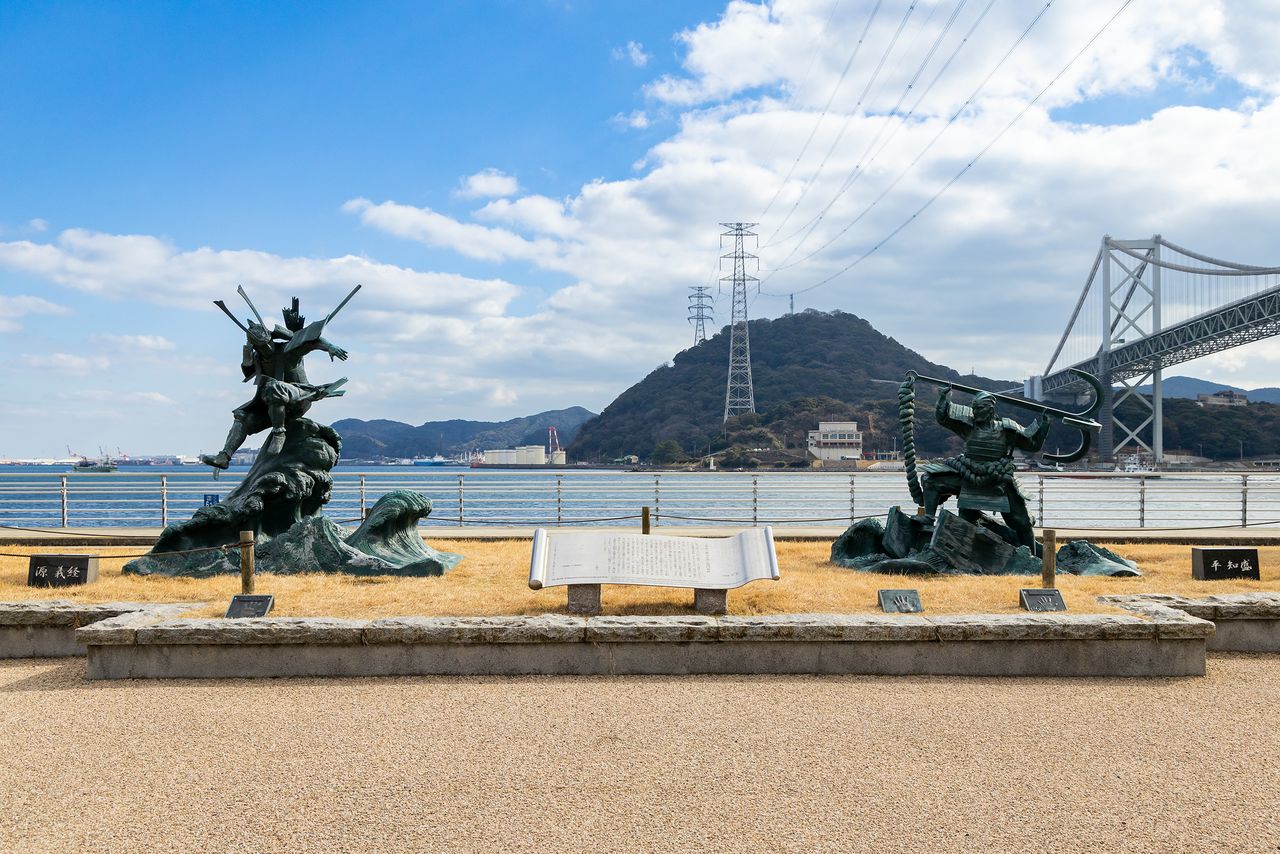 Statues of warriors Yoshitsune and Tomomori. The current through Hayatomonoseto can flow at up to 10 knots, or 18 kilometers an hour. 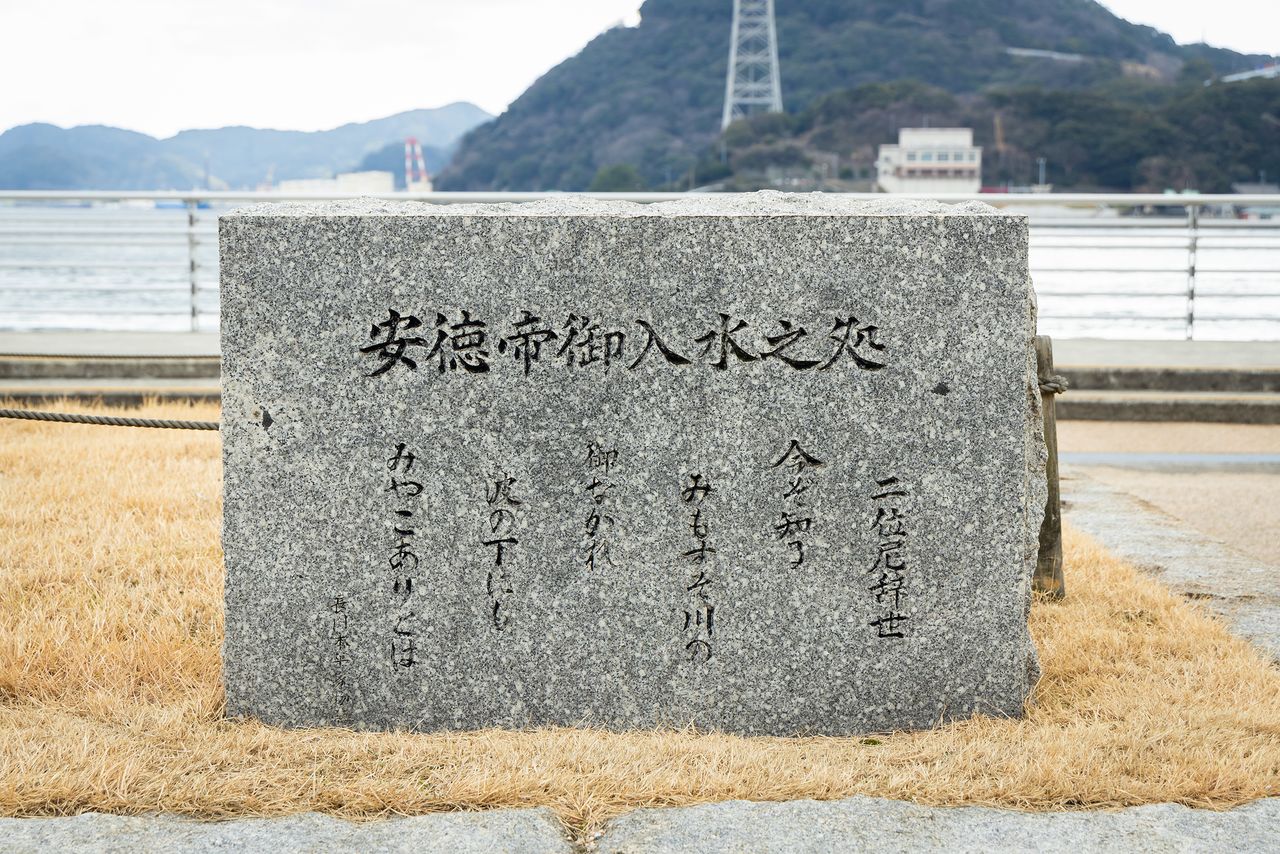 Memorial to Emperor Antoku’s drowning. Mimosusogawa derives its name from the death poem of his grandmother Taira no Tokiko, inscribed on the monument.

The current that flows through Kanmon Strait changes direction four times a day, and is considered especially perilous at Hayatomonoseto. The Genpei War had waged for six years until the Battle of Dannoura in 1185, but the Taira clan was on the back foot since its defeat a year earlier in the Battle of Ichinotani. Although they were cornered, the Taira used the tide at Dannoura to their advantage. However, the Minamoto clan withstood the onslaught and was able to draw out the battle. In the end, the Taira lost their advantage when the tide turned. Recognizing their likely defeat, members of the Taira chose to drown themselves.

Taira no Noritsune is said to have tried to drag the Minamoto military commander Yoshitsune with him into the sea, but Yoshitsune escaped, leaping six meters to a boat in the Minamoto fleet. Heike Monogatari (The Tale of the Heike), the epic account of the struggle between the two clans composed in the Kamakura period (1185–1333), states that Yoshitsune only made one leap, but later accounts exaggerated this to an eight-boat leap. 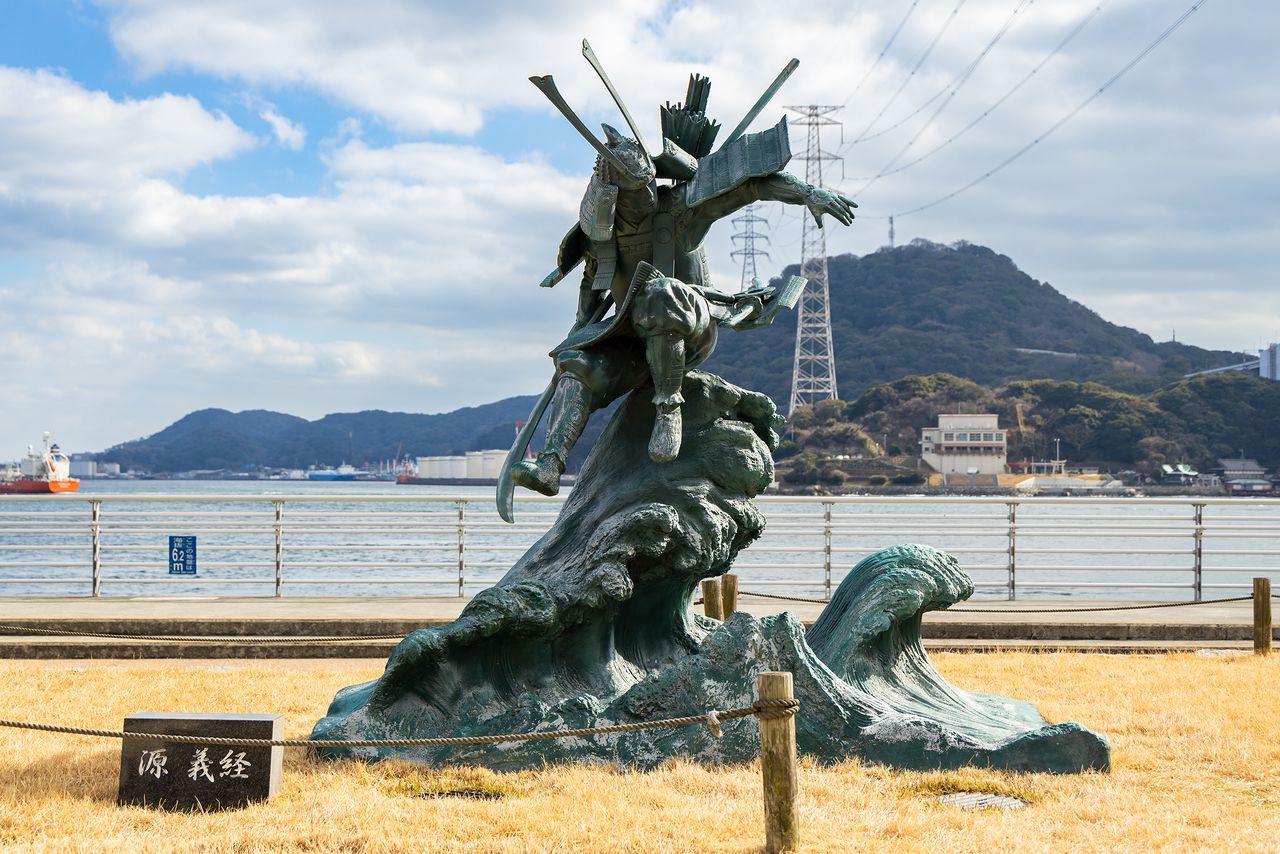 Statue of Yoshitsune, in heavy armor, leaping over eight boats.

The Taira Clan in the Afterlife

Taira no Tokiko, the wife of Taira no Kiyomori, is said to have recited a poem that she composed to the eight-year-old Antoku as she carried him to their death in the sea: “Know now, in the current of Mimosuso River, and under the sea, lies an Imperial Capital.” The area’s name, Mimosusogawa, is a sobriquet for the Isuzu River, which flows through the grounds of Ise Grand Shrine in Mie Prefecture. She carried her grandson, descendant of the Imperial line and the Ise branch of the Taira family, to a watery grave, beguiling him with a tale of a city below the waves.

Tomomori’s last words are also well-known. Upon seeing his mother, nephew, younger sister Tokuko (the dowager empress and mother of Emperor Antoku), and many retainers jump to their deaths in the sea, he took his own life, lamenting that “I have seen all that I must see.” The Tale of the Heike recounts that Tomomori donned two suits of heavy armor to ensure that his corpse would not re-surface and be defiled. Later Nō and Kabuki dramatic accounts depict him holding an anchor to weigh himself down. 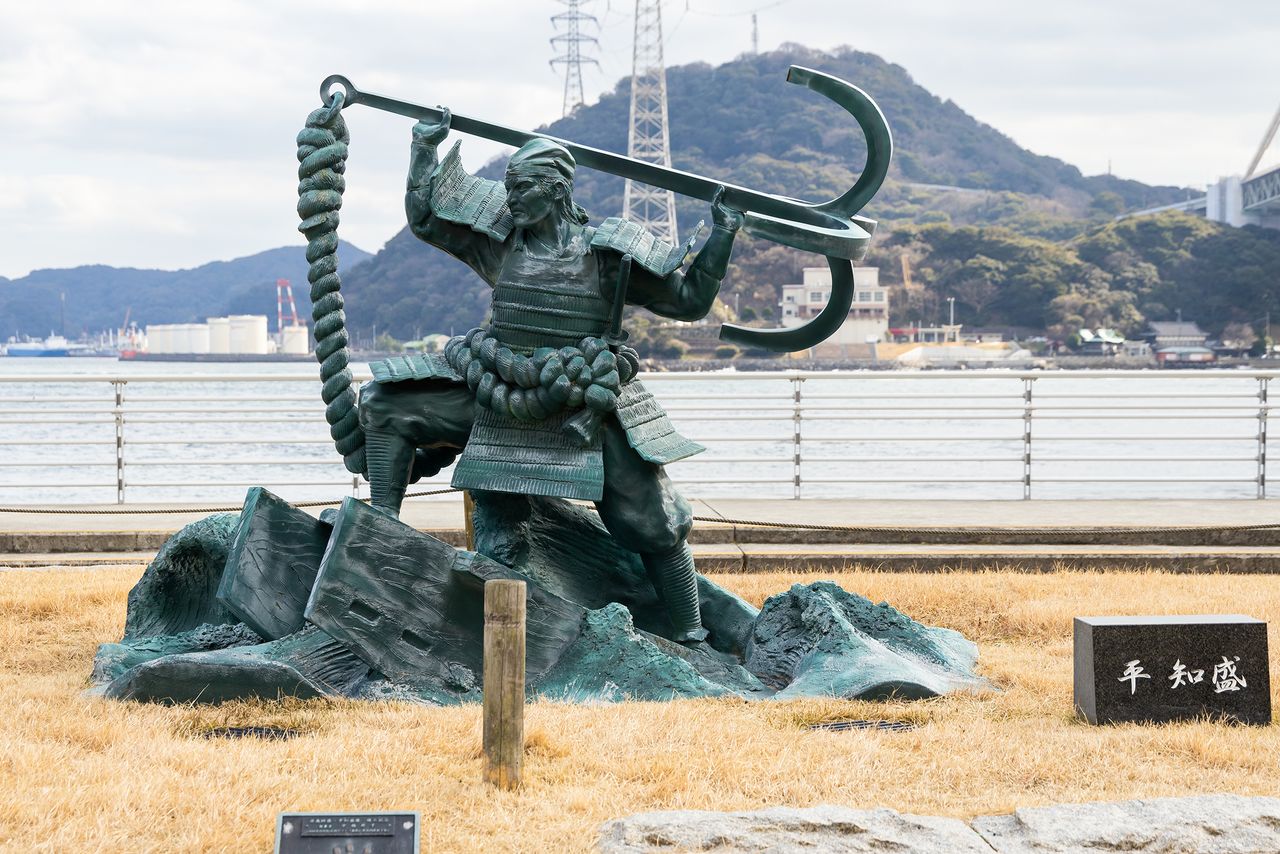 Statue of the gallant Tomomori with anchor. The statue recreates a famous scene in the Bunraku and Kabuki play Yoshitsune senbon-zakura (Yoshitsune and the Thousand Cherry Trees). 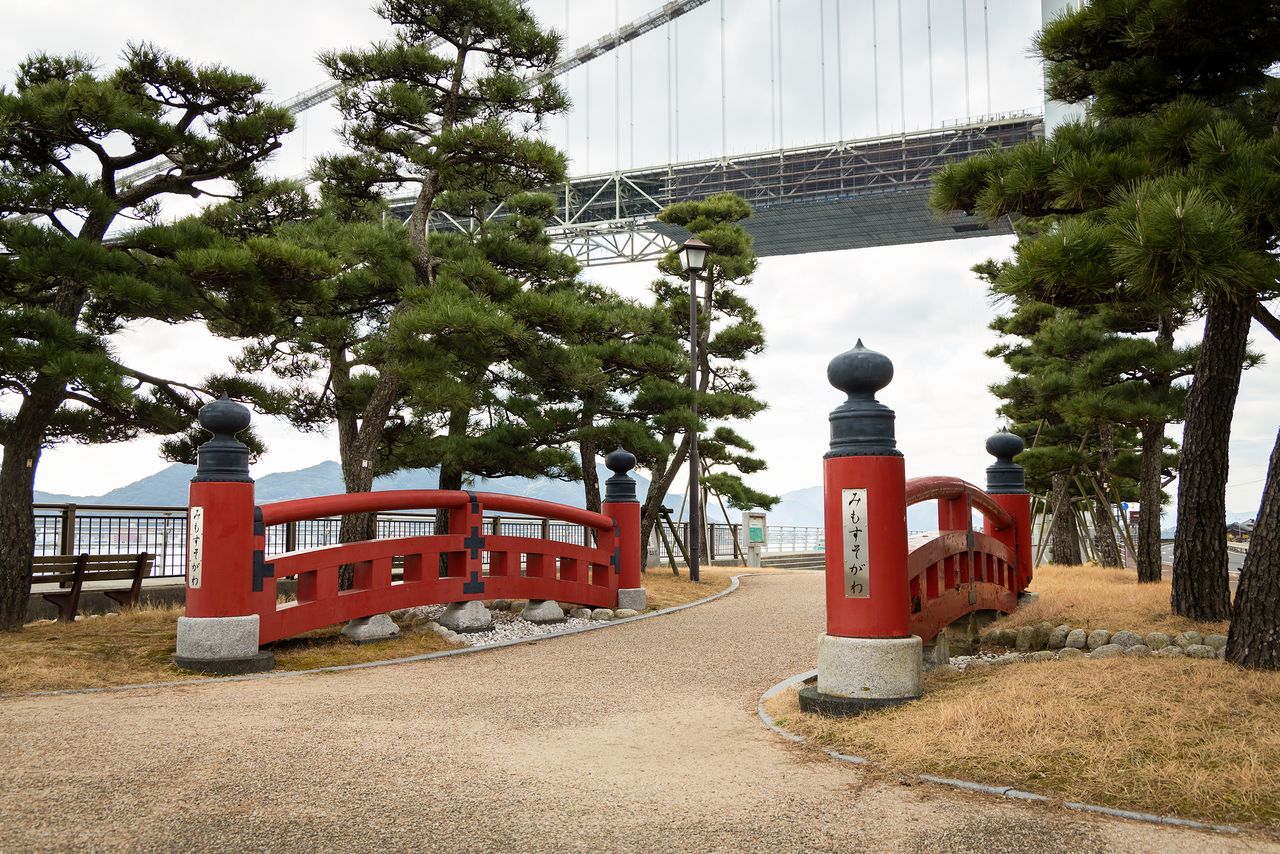 A creek that ran here was called Mimosusogawa. It now flows beneath the park, but an old bridge still stands near the statues of Yoshitsune and Tomomori.

Giant nineteenth-century cannons that belonged to the Chōshū domain are also displayed in the park. An artillery battery was built on the site at the end of the Tokugawa period, and was the stage for the Battle of Shimonoseki Strait, which began in 1863. The Shimonoseki-based Chōshū clan came under fire from the allied British, American, French, and Dutch fleet. Chōshū had advocated that Japan “expel the barbarians,” but after witnessing the might of the Western forces, they changed their stance, pressing to open Japan and forging an alliance with the Satsuma clan that led to the Meiji Restoration. Dannoura, the stage for the rise of samurai domination over Japan, was hence also pivotal in its demise. 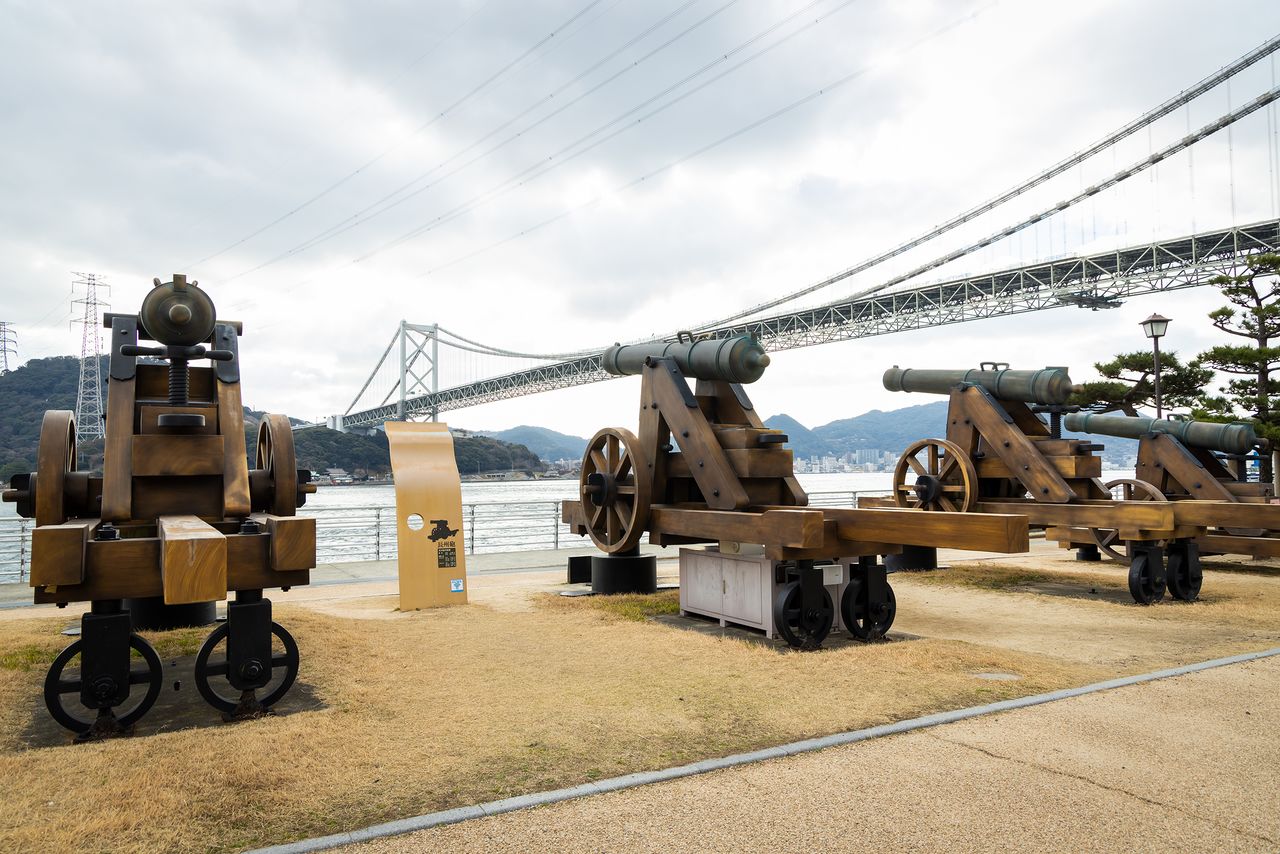 Sites Near the Dannoura Battlefield

West of the Dannoura Battlefield, in Amidaiji area of Shimonoseki, is the Shintō shrine Akama Jingū. The entrance, the Suitenmon, is said to resemble the gate of Ryūgū-jō, the mythical undersea palace of Ryūjin, dragon god of the sea, recalling Taira no Tokiko’s death poem. Nanamorizuka is a monument to the Taira within the shrine grounds. The tomb of Emperor Antoku is adjacent to Akama Jingū, and is the only imperial tomb in Japan’s Chūgoku region.

East of the battlefield, along Highway 9, is another monument to the conflict, the Heike no ippaimizu. A small Shintō gate and tiny shrine sit on the water’s edge. It is said that Taira warriors, having reached the shore, found fresh drinking water here, but although the first sip was sweet, the second turned to seawater. 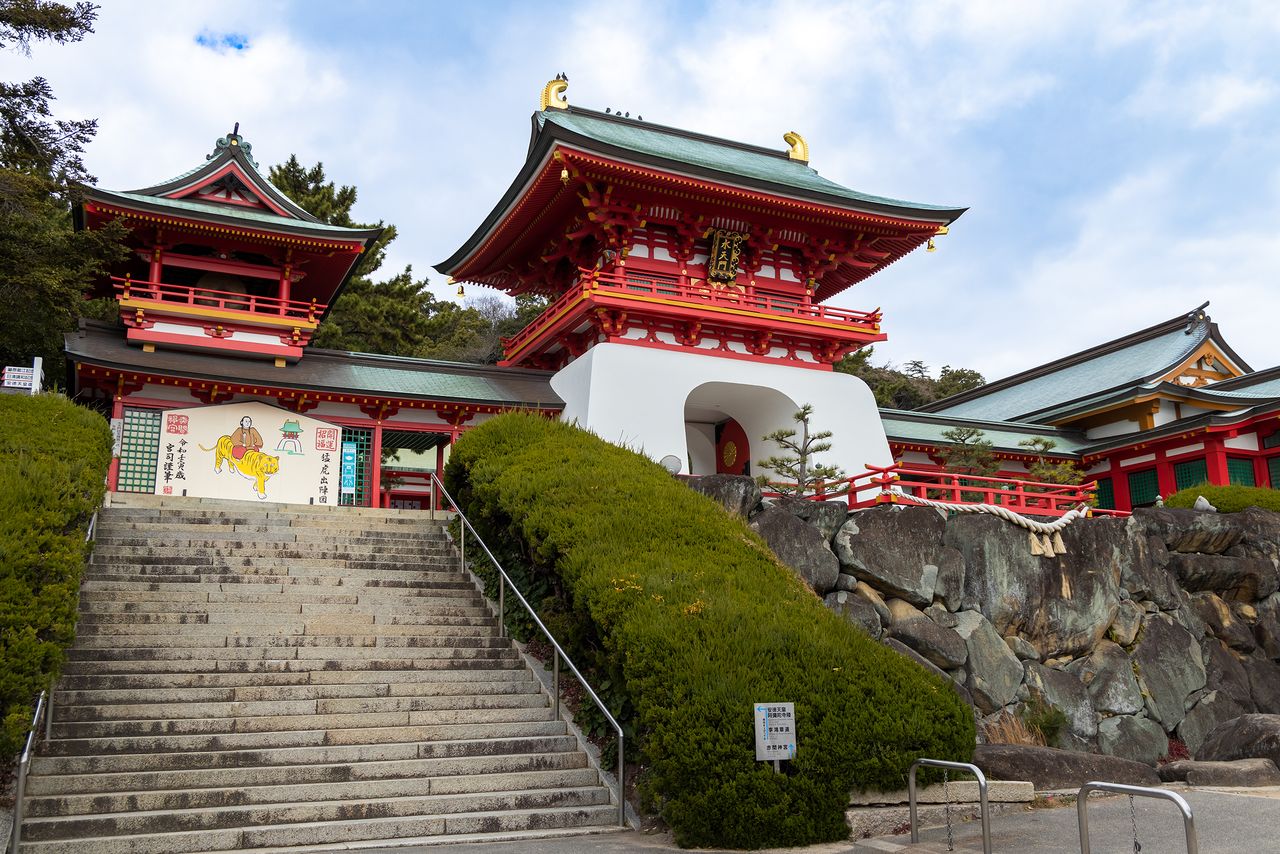 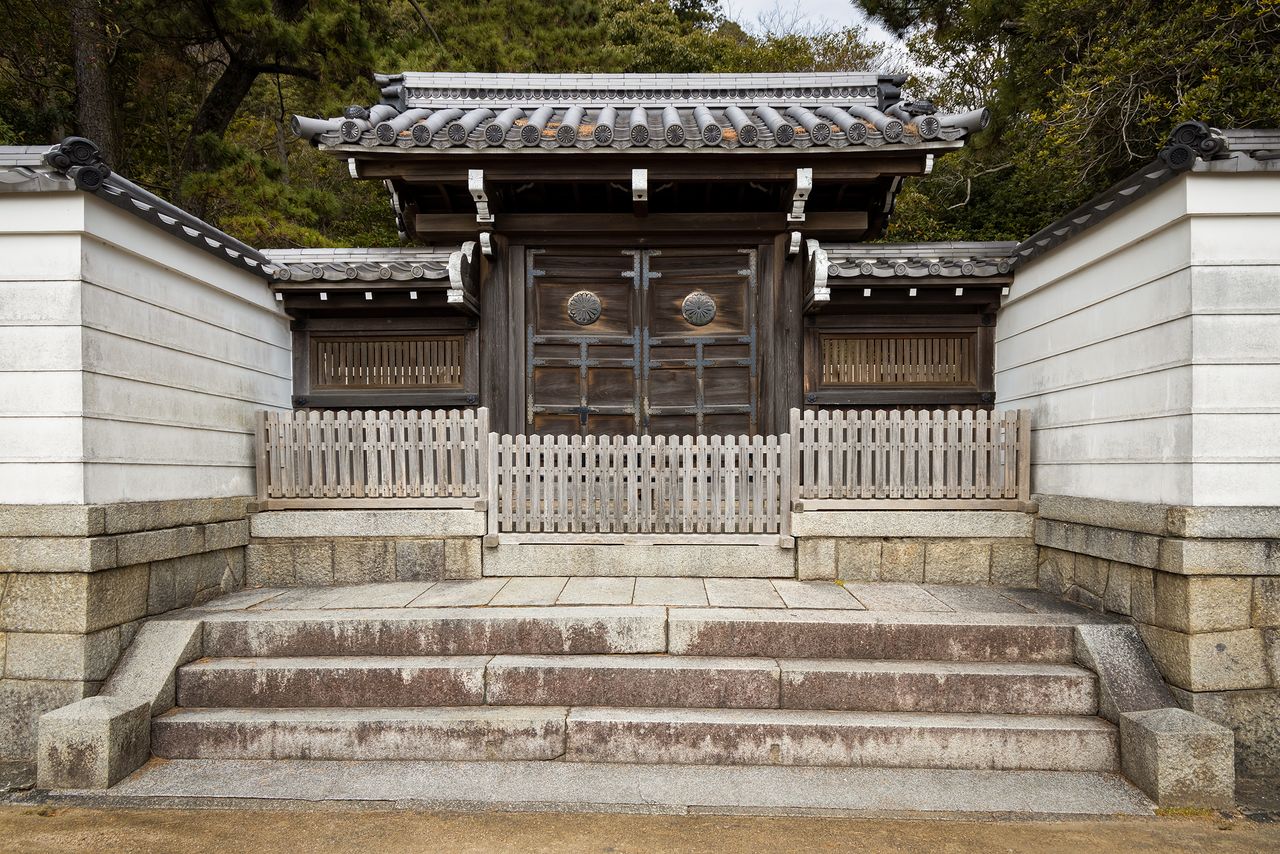 The tomb of Emperor Antoku, near Akama Jingū, is under the jurisdiction of the Imperial Household Agency. 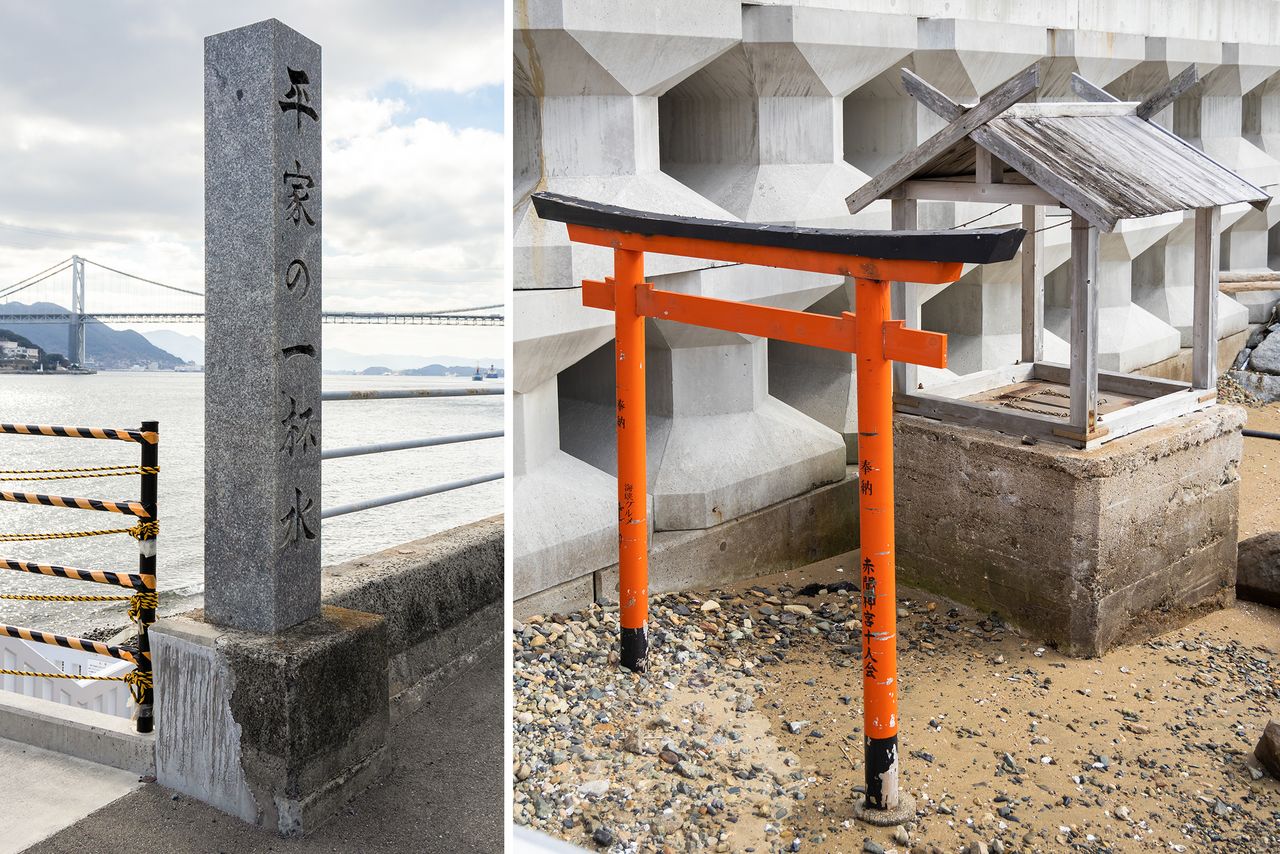 Heike no ippaimizu memorial is underwater at high tide. Opposite, on the Kyūshū shore , is a dried-up well bearing the same name.

Across the strait in Kitakyūshū, the Second Observation Deck in Mekari Park is a popular look-out with superb views of Kanmon Bridge. There is also a giant mural with images from an ancient picture scroll depicting the Genpei Dannoura Battle. The bridge is stunning when lit-up at night. 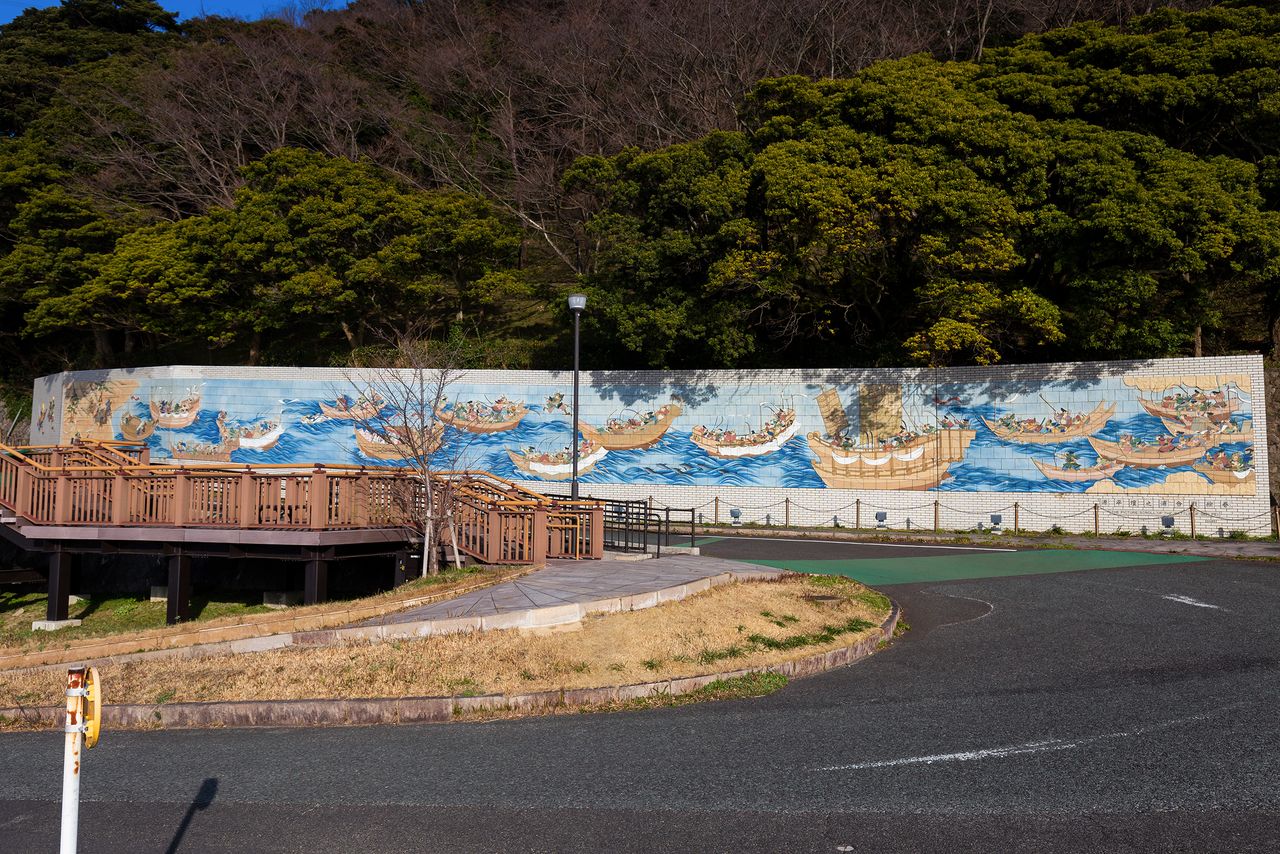 The 50-meter wide mosaic is made from Arita porcelain and recreates images from a picture scroll of the Dannoura battle. 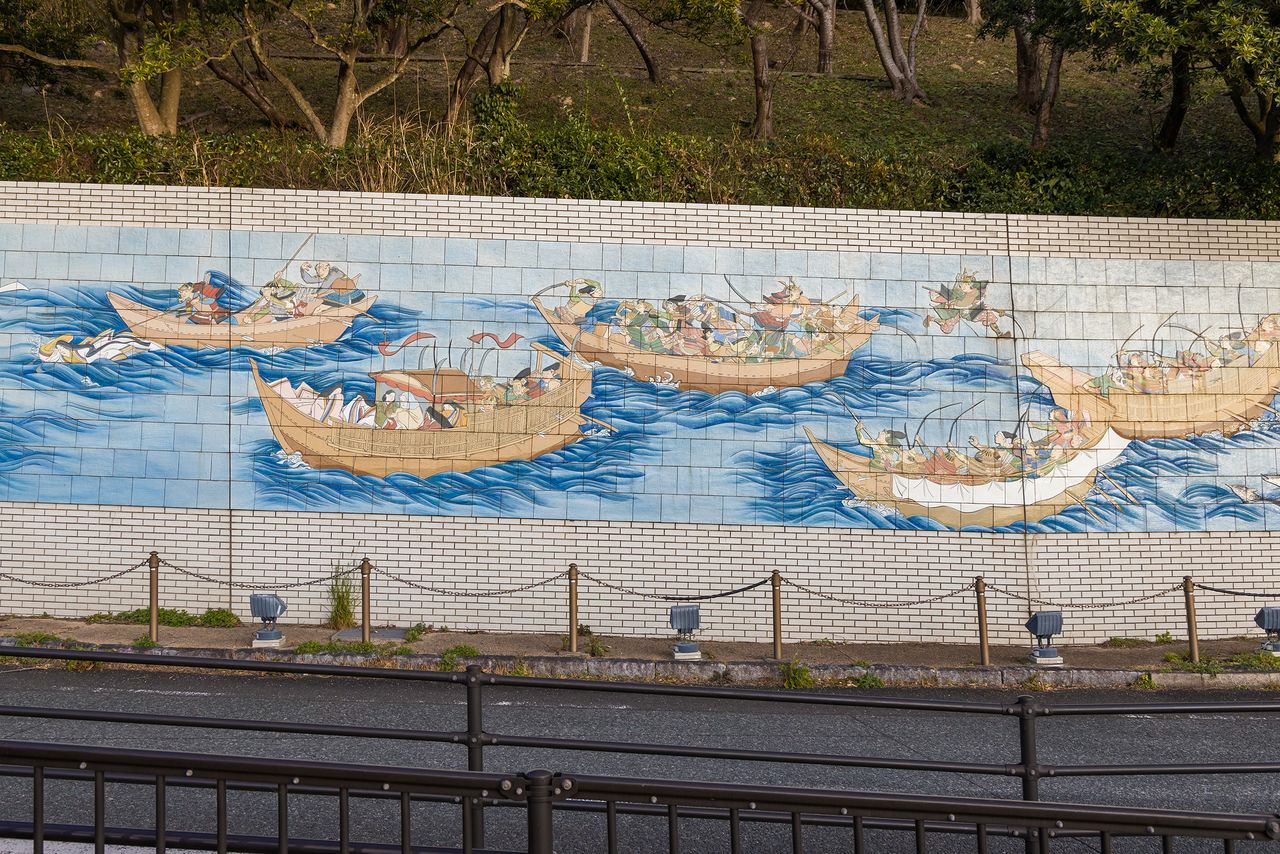 The dowager empress is seen jumping from the boat to the left, and below, to the right, is Taira no Tokiko embracing Emperor Antoku. In the upper right is Yoshitsune making his eight-boat leap. 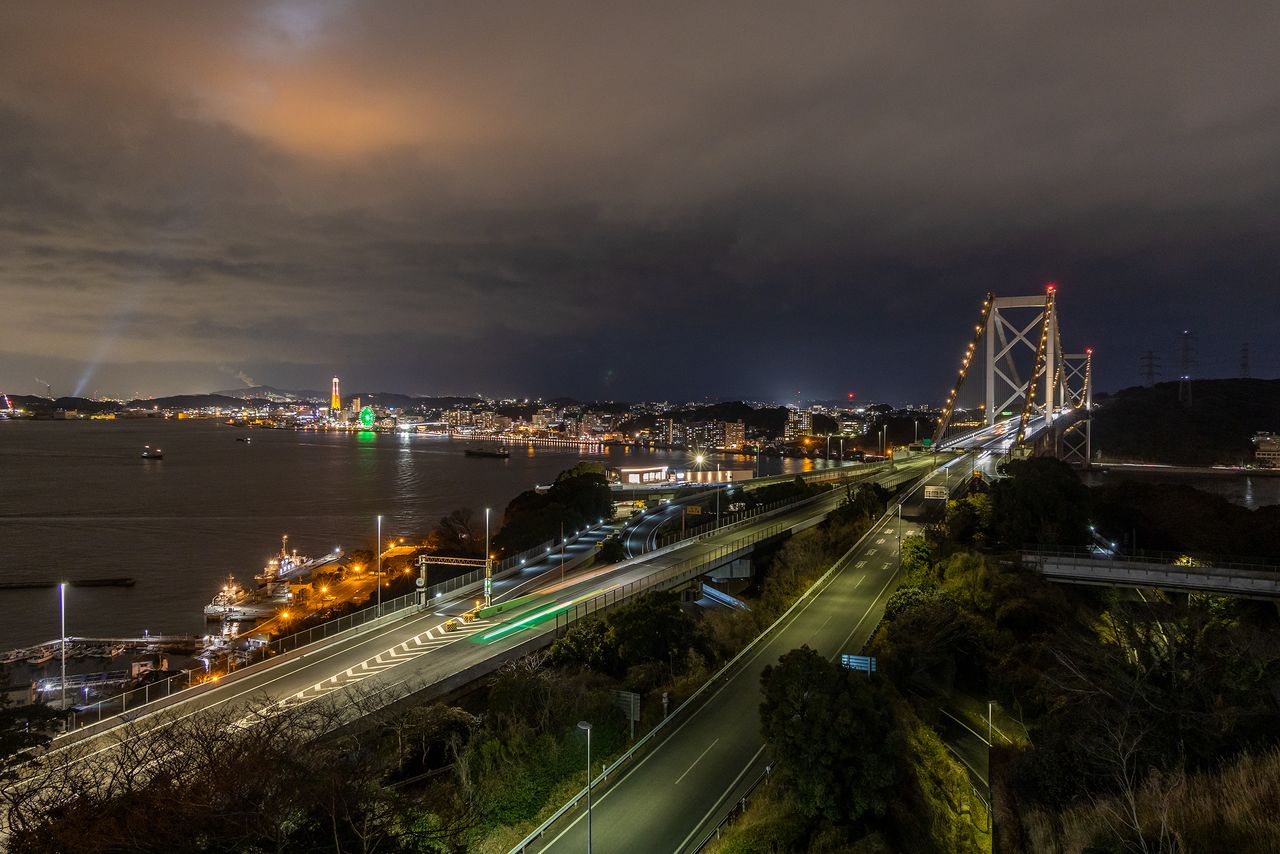 The spectacular view of the Kanmon Strait from Second Observation Deck in Mekari Park hardly evokes a battle scene.