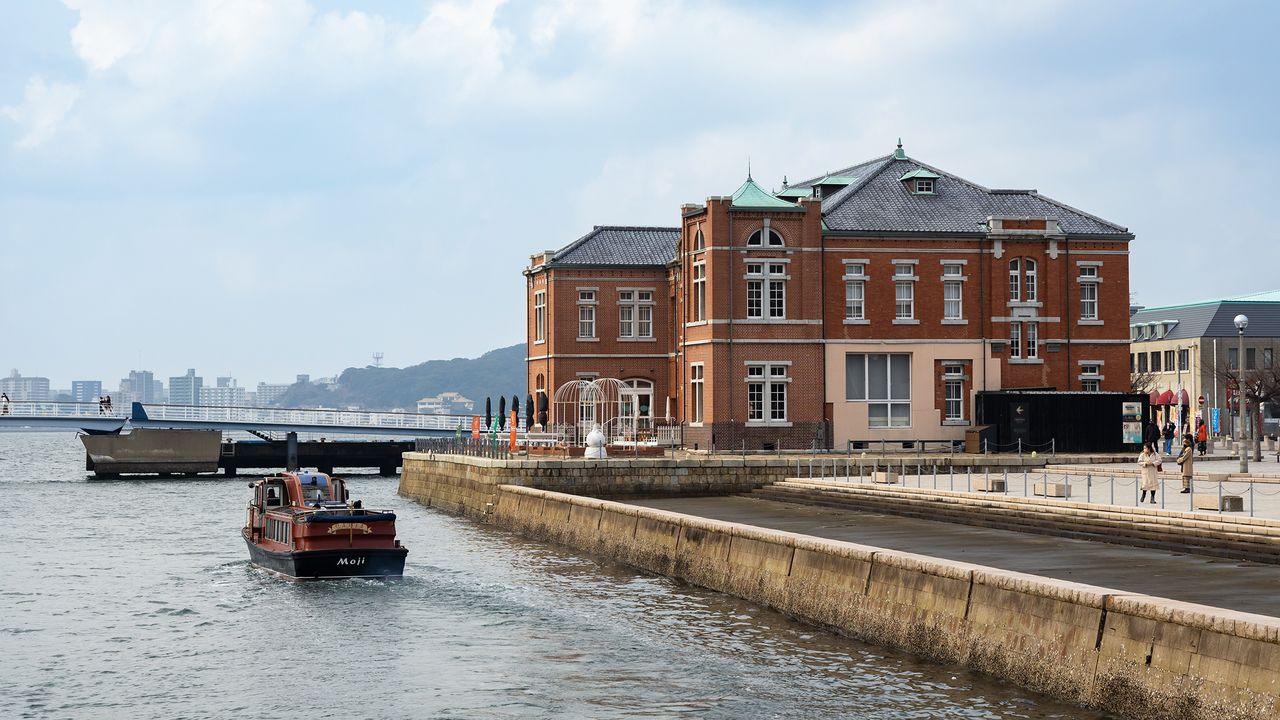 Travel History Mar 25, 2022
A century ago, Moji Port in the city of Kitakyūshū flourished as a gateway for trade. Mojikō Retro, a project begun in the late 1980s to restore the port’s historic buildings, turned the district into a tourism destination. We present an overview of Moji Port’s history and the district’s highlights.

Kitakyūshū’s Moji Port, together with Kobe and Yokohama, was a major trade port that prospered in the years up to World War II. Situated at the northernmost point of the island of Kyūshū in Fukuoka Prefecture, it overlooks the Kanmon Strait directly across from the city of Shimonoseki in Yamaguchi Prefecture. Many notable buildings, erected between the 1880s and the 1920s, give the area a distinctive old-fashioned feeling. Work to preserve and maintain the buildings started in the late 1980s and the area, dubbed “Mojikō Retro,” opened as an urban tourism destination in 1995. Well-known for its attractive nighttime views, Mojikō Retro drew over two million visitors a year prior to 2020. 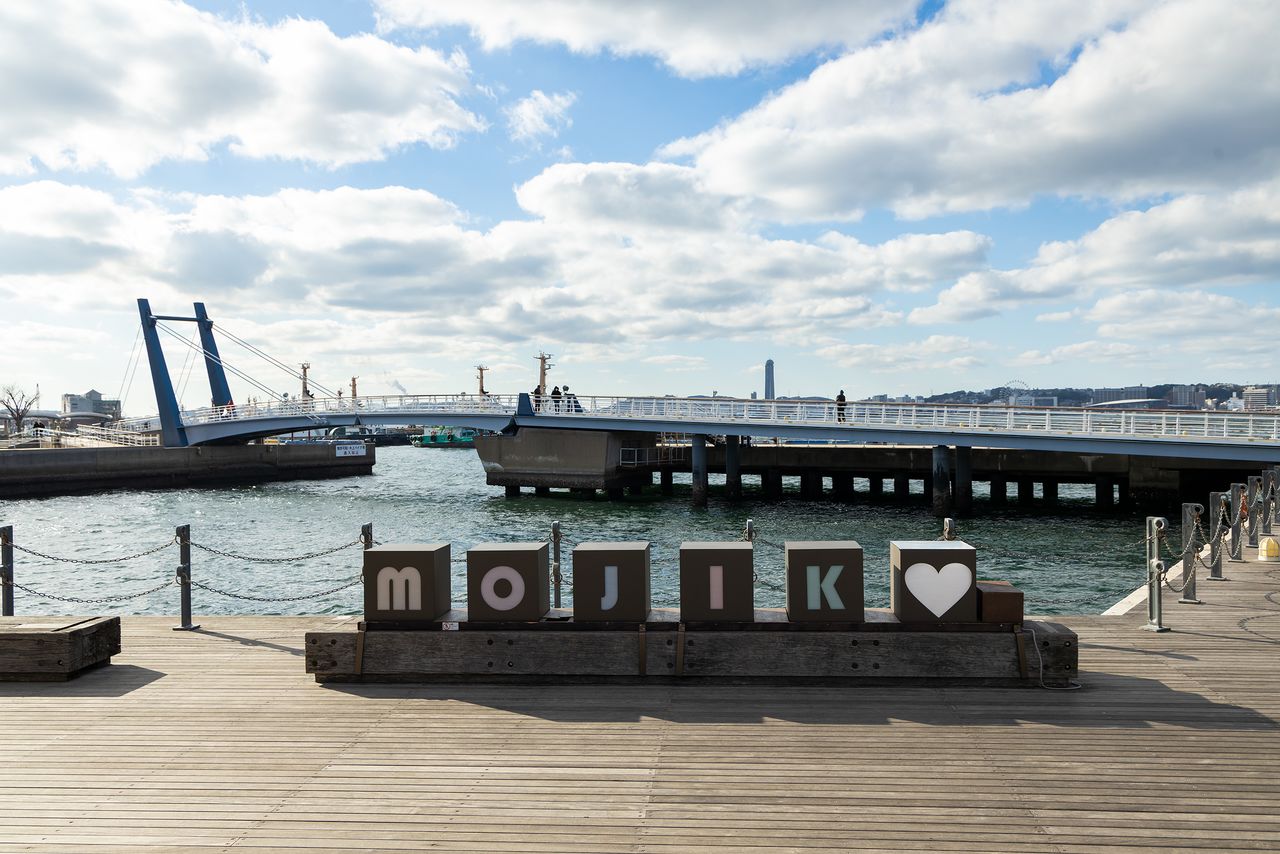 The Blue Wing Moji pedestrian drawbridge is a popular spot for couples. Symbol of the Mojikō Retro District, it was completed in 1993. 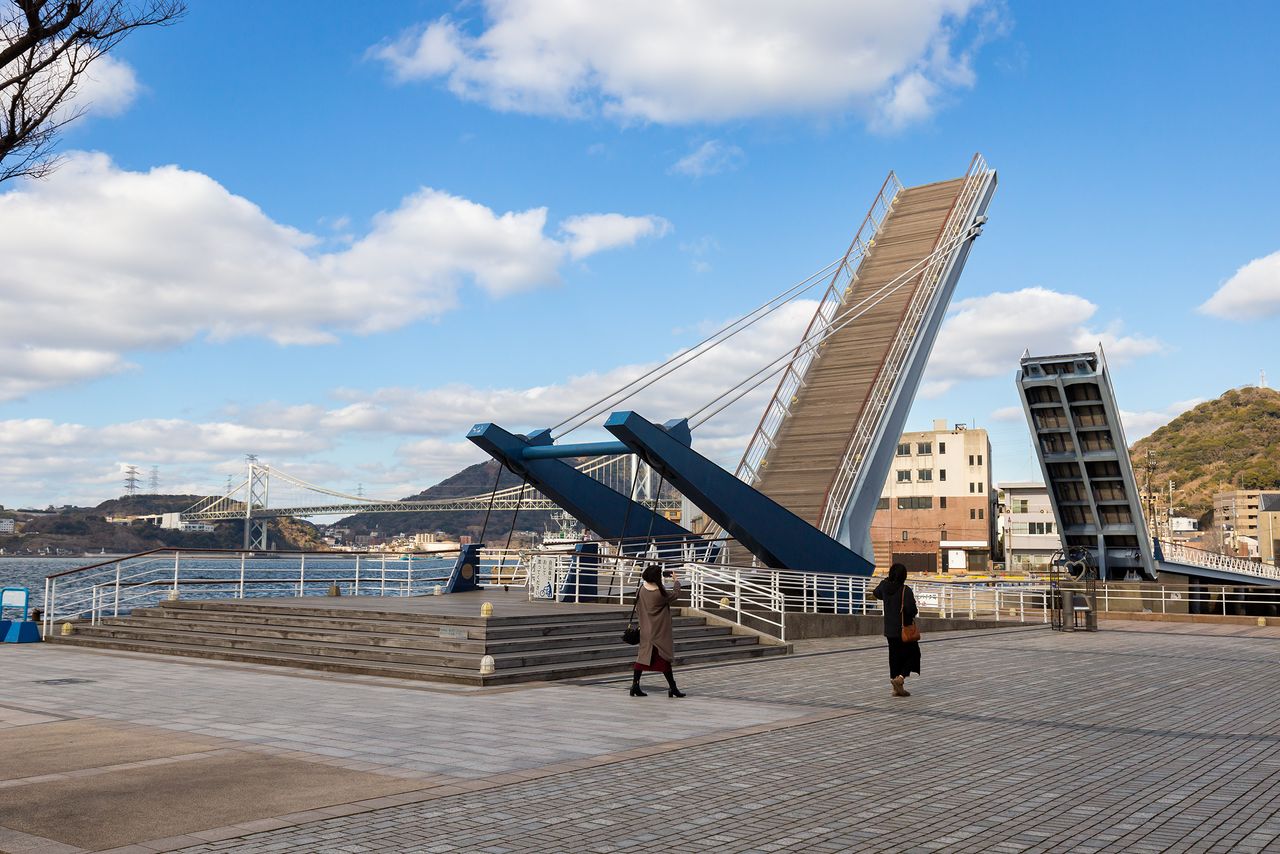 The drawbridge, which operates six times a day, is a great spot for viewing Kanmon Bridge and the city of Shimonoseki across the strait. 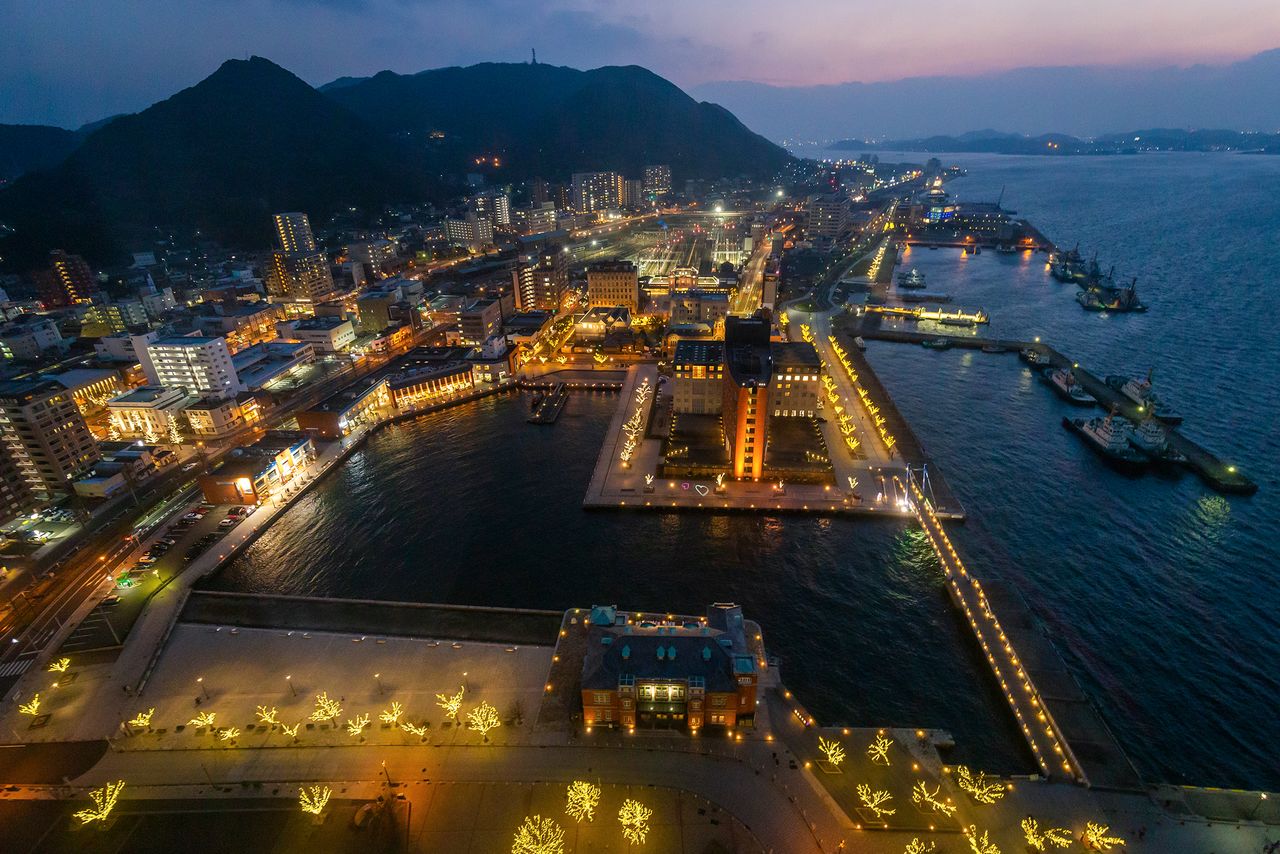 The view from the Mojikō Retro Observation Deck at twilight. The former Moji Customs Office is in the foreground, and in the center is the Mojikō Hotel.

In the Edo period (1603–1868), Shimonoseki flourished as a port of call on the kitamaebune shipping route that linked Osaka with ports on the Sea of Japan. Moji, meanwhile, was a fishing village in the middle of salt flats. Local boosters, eager to promote economic development by constructing a port, approached industrialist Shibusawa Eiichi and others, who founded the Moji Chikkō Company in 1889, and large-scale land reclamation work to create a port commenced. Moji was designated an open port for handling coal and rice from Chikuhō in central Fukuoka Prefecture, and in 1891 the Kyūshū Railway line was extended to Moji. The railway also placed its head office in Moji, making the port the gateway for both sea and overland shipping to Kyūshū. 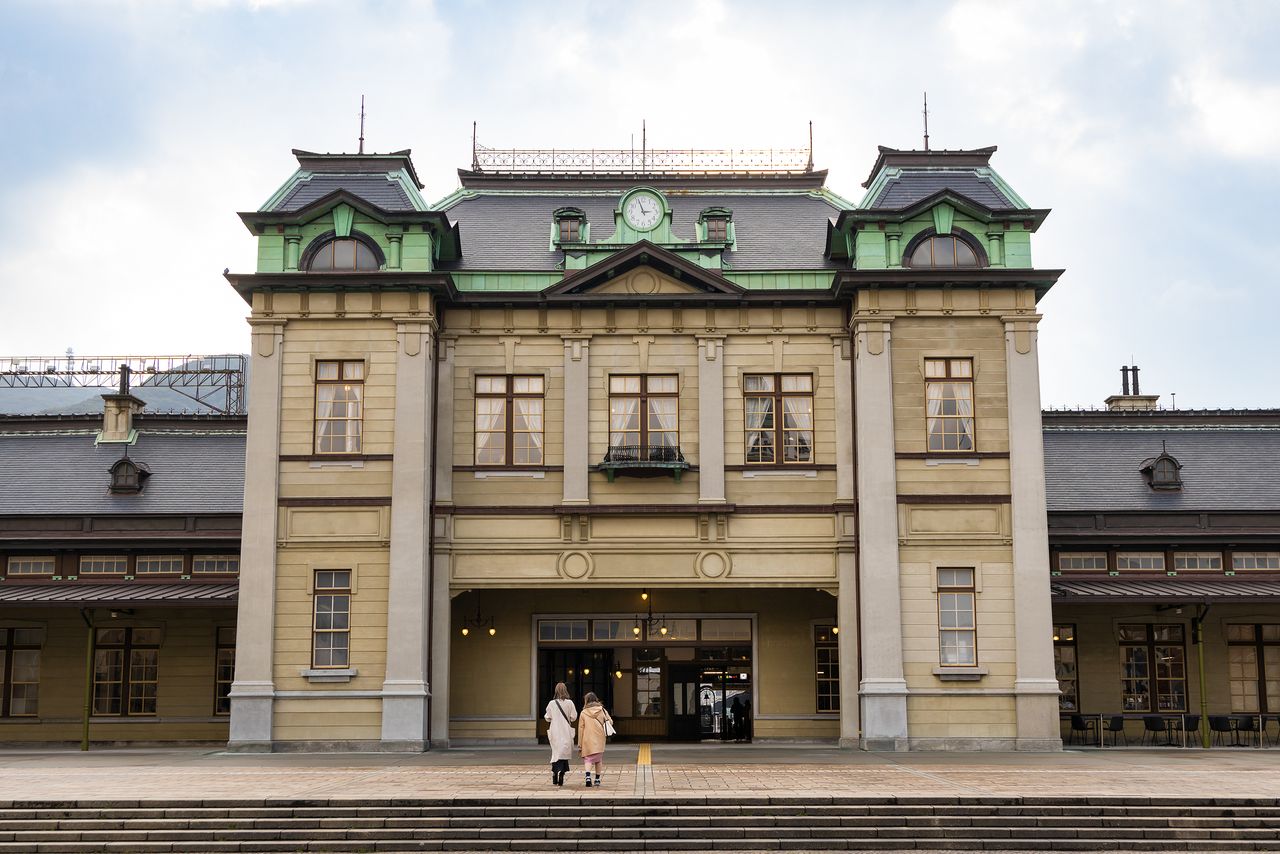 JR Mojikō Station, an important cultural property, was built in 1914. 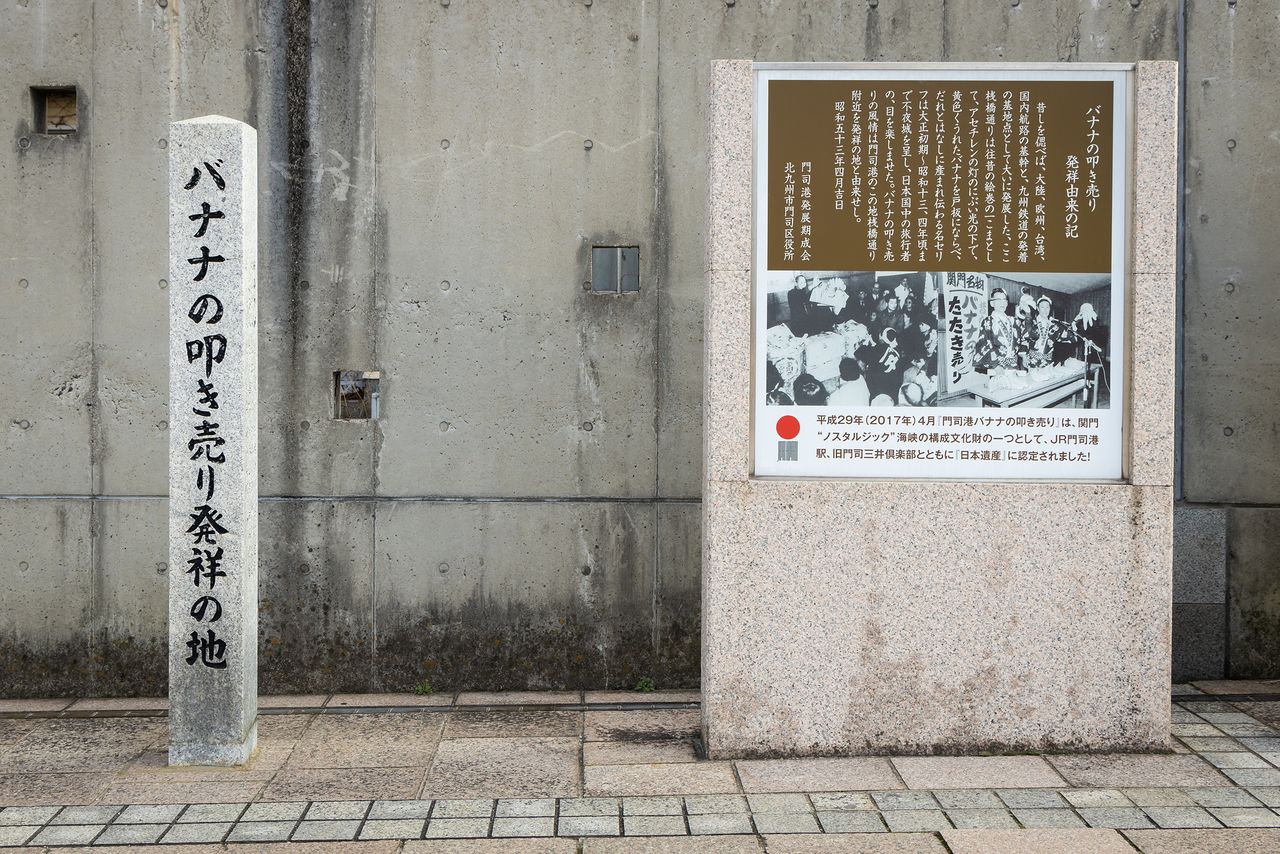 The monument to banana no tataki uri, the sale of cut-price bananas, which is said to have originated at Moji Port. Moji did considerable trade with Taiwan, from which it imported bananas. Banana no tataki uri later developed into a kind of street performance by peddlers who would attract crowds with their spiels. 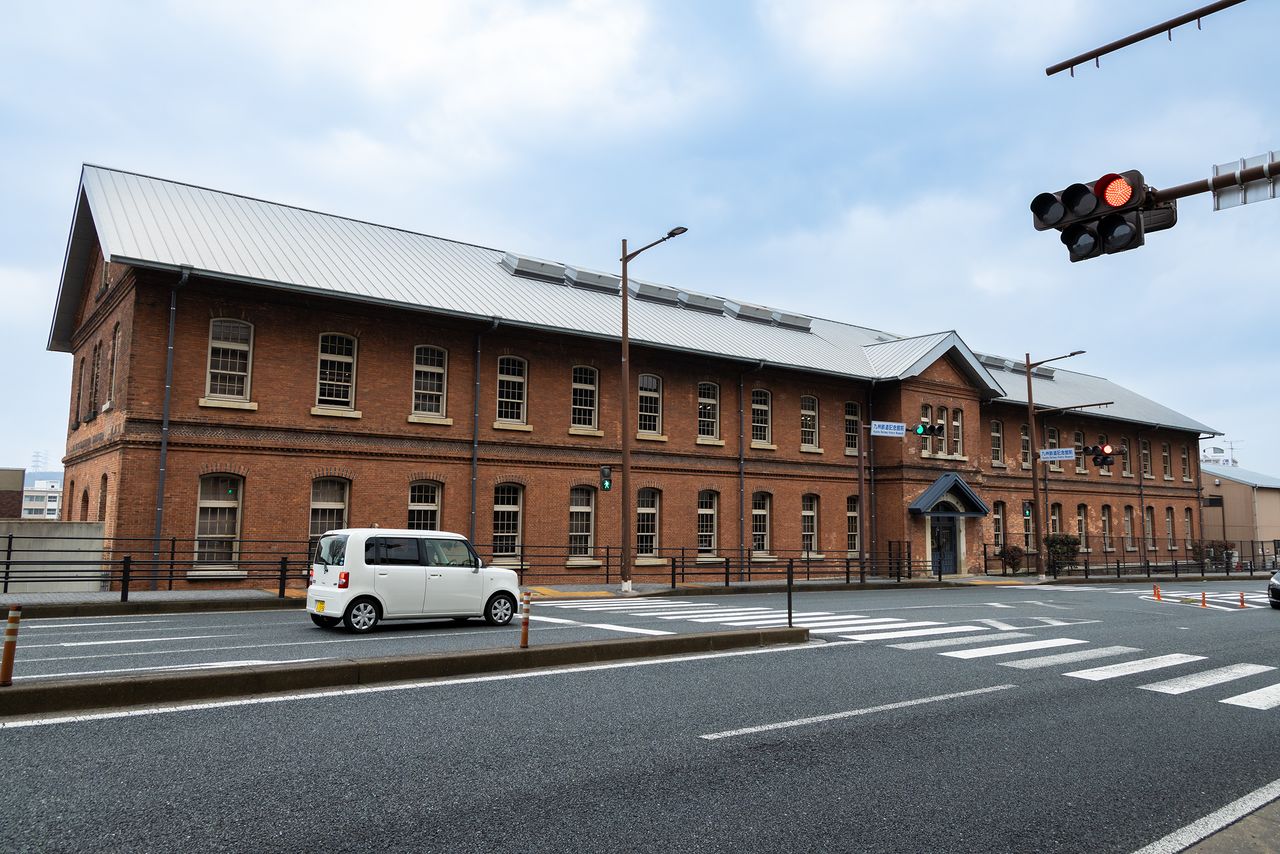 The oldest structure in the district is the former Kyūshū Railway head office building. Erected in 1891, it has been repurposed as the Kyūshū Railway History Museum. 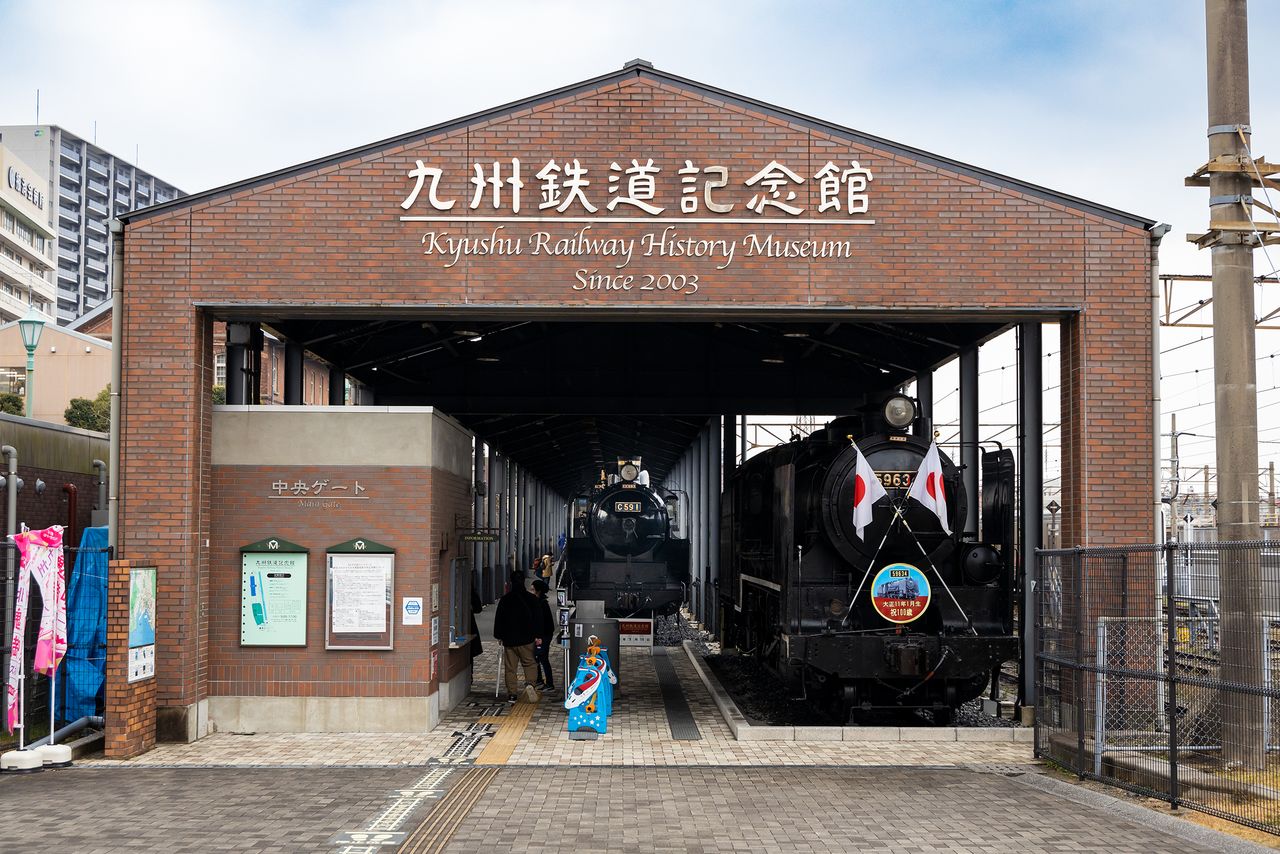 Locomotives are on display at the museum, which opened in 2003.

In the wake of the Sino-Japanese War (1894–5) and the Russo-Japanese War (1904–5), opportunities for trade with nearby China and the Korean peninsula expanded rapidly. Ocean shipping companies, trading houses, and banks soon set up branches in Moji.

After the opening of Moji Port in 1899, Moji vied with Kobe for dominance and soon became Japan’s leading port, registering the largest number of incoming ships for three consecutive years. The value of import and export trade also grew apace, and by the early twentieth century, Moji ranked fourth as a trade port after Yokohama, Kobe, and Osaka. A sea route between Moji and Qingdao (Tsingtao) in China, was opened up after World War I and scheduled service to Dalian and Manchuria started in 1932. 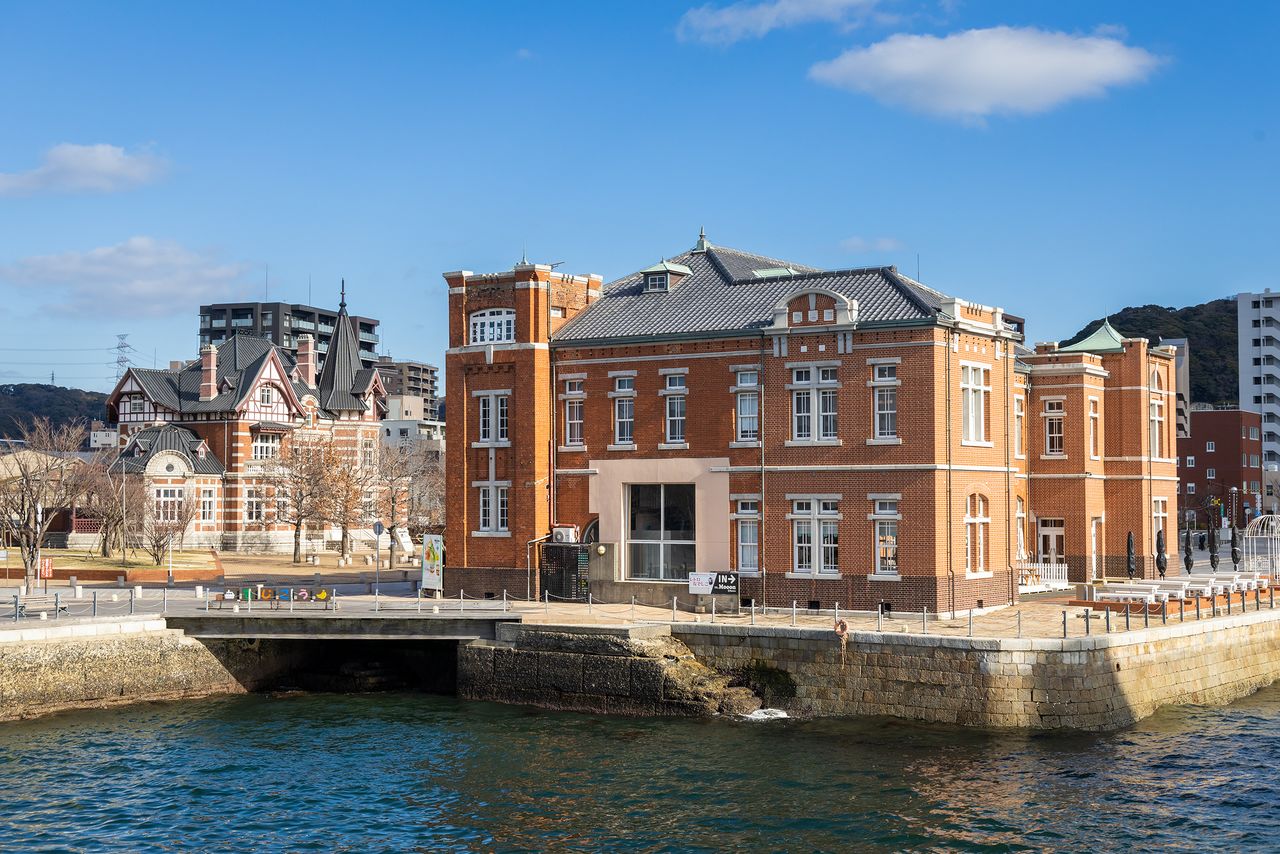 The former Moji Customs Office dates from 1912. The Dalian Friendship Memorial is visible in the background to the left. 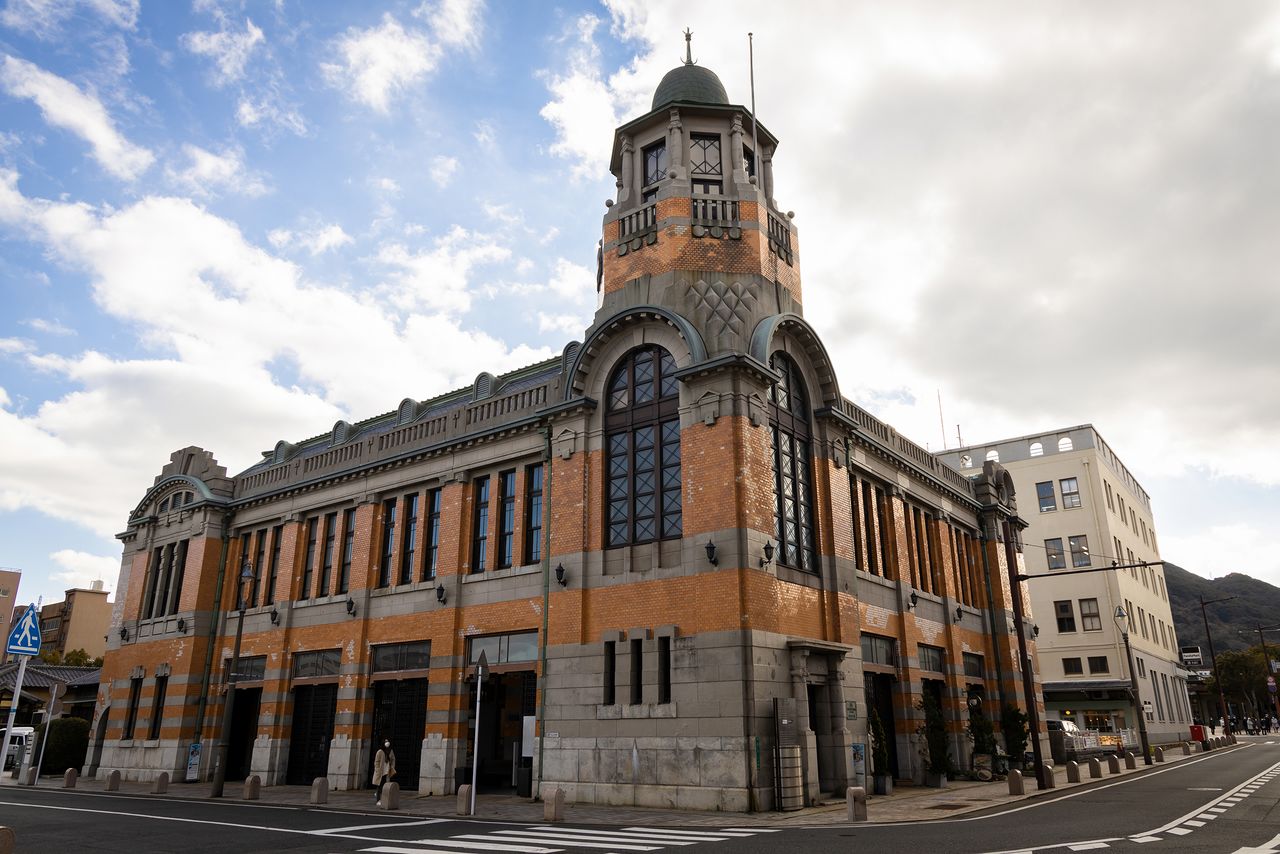 The former OSK Lines Building, built in 1917, features an elegant octagonal tower. The first floor of the building houses a gallery showing the works of Watase Seizō (b. 1945), a manga artist and illustrator who grew up in Kitakyūshū. 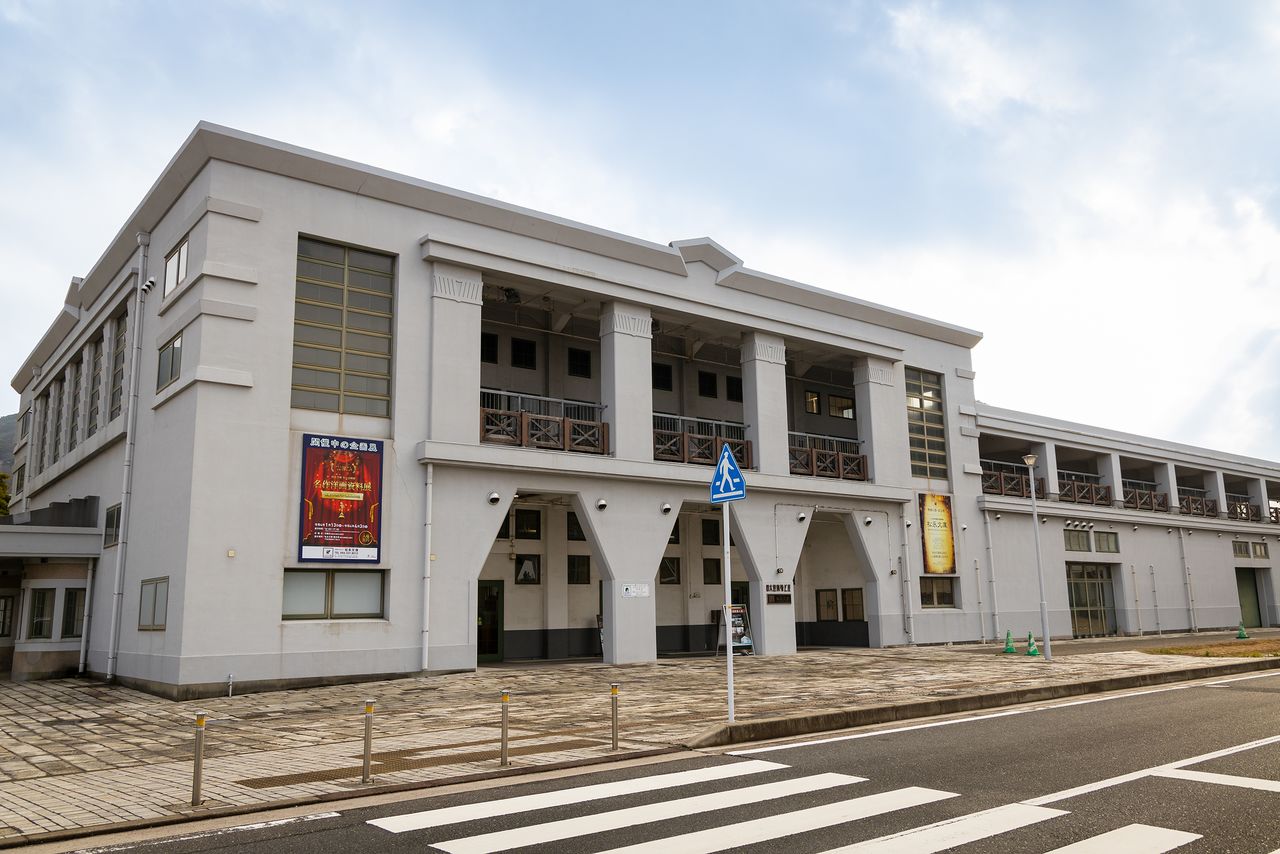 The former Dalian Sea Route Warehouse, erected in 1929, was the terminus for ships sailing between Moji and Dalian.

In the years leading up to World War II, Moji’s dominance as a port began to fade. Trade was almost exclusively with China, and as the war started to go badly for Japan, business fell off precipitously. With the 1942 opening of the Kanmon railway tunnel at Dairimachi, five kilometers south of Moji, Dairimachi Station was renamed Moji Station and became Kyūshū’s gateway for overland shipping. The former Moji Station was renamed Moji Port Station and its importance as a railway terminal faded away due to the emergence of this new gateway.

After 1945, some of the Moji Port wharves were requisitioned by the Allied Occupation Forces, leaving Moji unable to capitalize on demand stimulated by the Korean War (1950–3). Exports of coal from the mines in central Fukuoka Prefecture had also fallen off, and as new wharves capable of handling containerized traffic were built nearby, Moji gradually lost its role as a trade port.

The Mojikō Retro project to preserve Moji Port’s historic buildings got underway in 1988. Tourist attractions, including the Blue Wing Moji drawbridge and the Mekari Park Second Observation Deck overlooking the district, were built. More tourism facilities followed, such as the Kyūshū Railway History Museum, the Kaikyō Plaza, and the Mojikō Retro Observation Deck, transforming the area into one of northern Kyūshū’s most popular spots. The old buildings are illuminated at night, enhancing the old-time atmosphere. 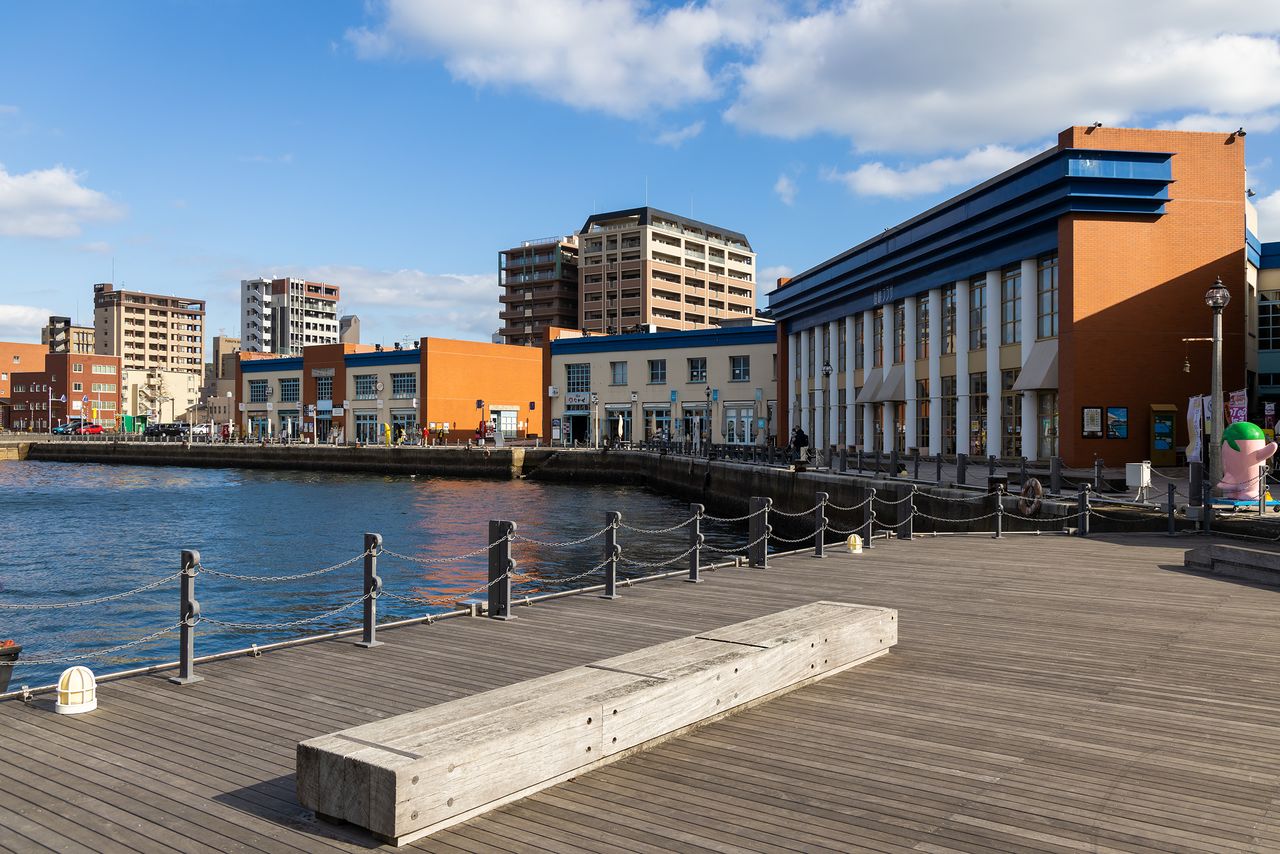 The Kaikyō Plaza is a commercial facility with restaurants, cafés, and souvenir shops. Mojikō Retro cruises also depart from here. 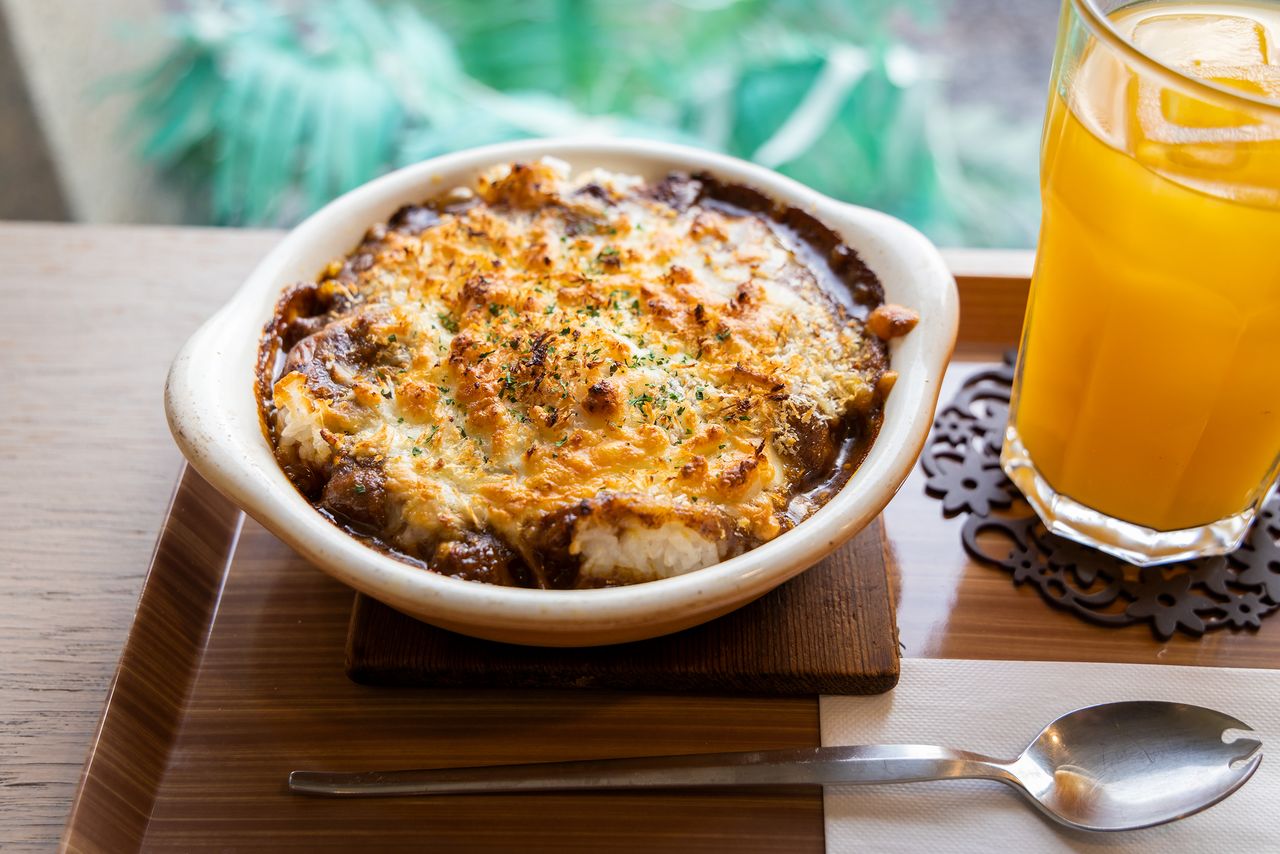 Yaki-karē, Mojikō’s signature dish, is a curry and rice gratin with a soft-boiled egg under the cheese topping. 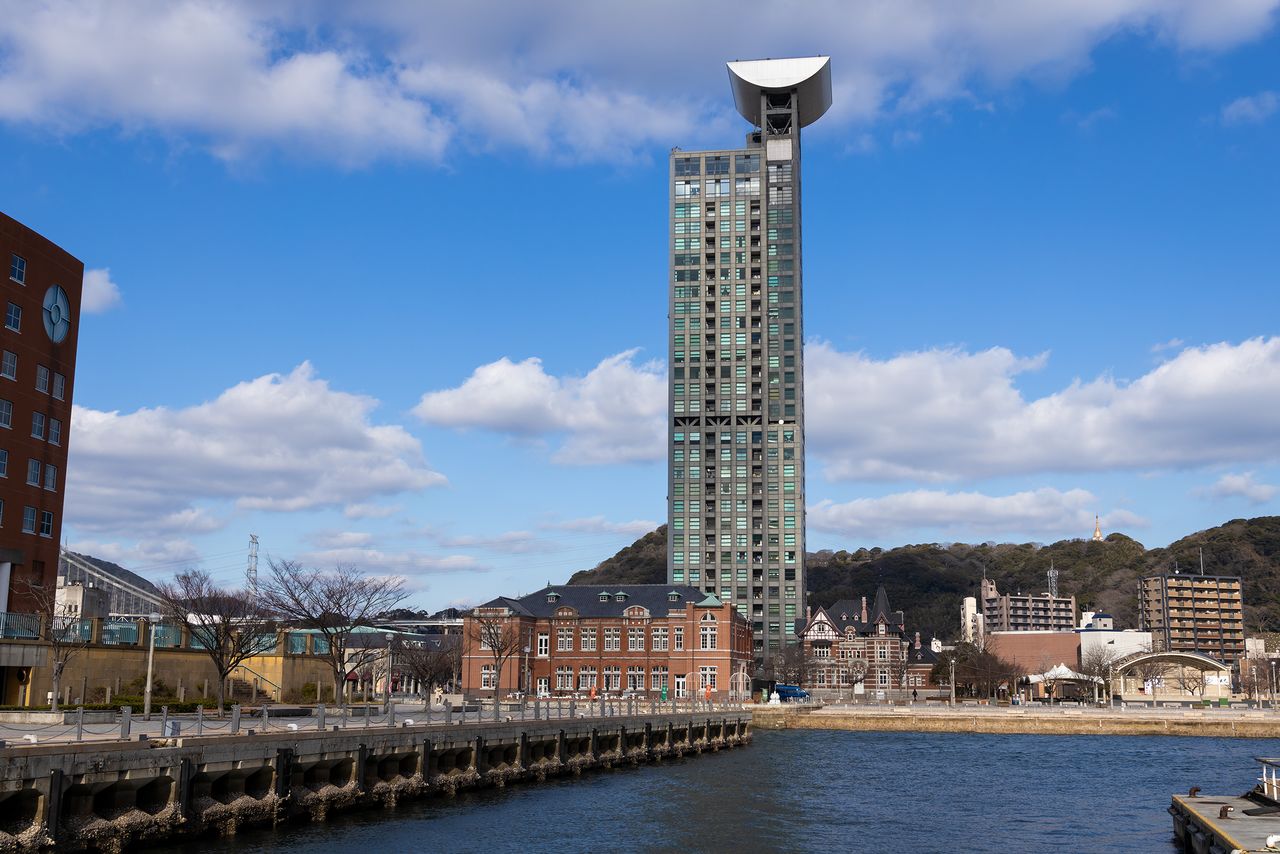 The former Moji Mitsui Club, dating from 1921, hosted many luminaries, including Albert Einstein.

The Mojikō Retro Scenic Line and Nearby Sights

The Shiokaze trolley train on the Mojikō Retro Scenic Line, running from the Kyūshū Railway History Museum to Mekari at the foot of the Kanmon Bridge, operates on weekends and during summer holidays. The line covers a distance of 2.1 kilometers in 10 minutes, and each of its four stations has noteworthy attractions.

The Idemitsu Museum of Arts is the first stop after the Kyūshū Railway History Museum. Moji is where present-day major petroleum company Idemitsu Kōsan got its start, and the museum houses a collection of artworks including paintings, calligraphy, and ceramics amassed by company founder Idemitsu Sazō. 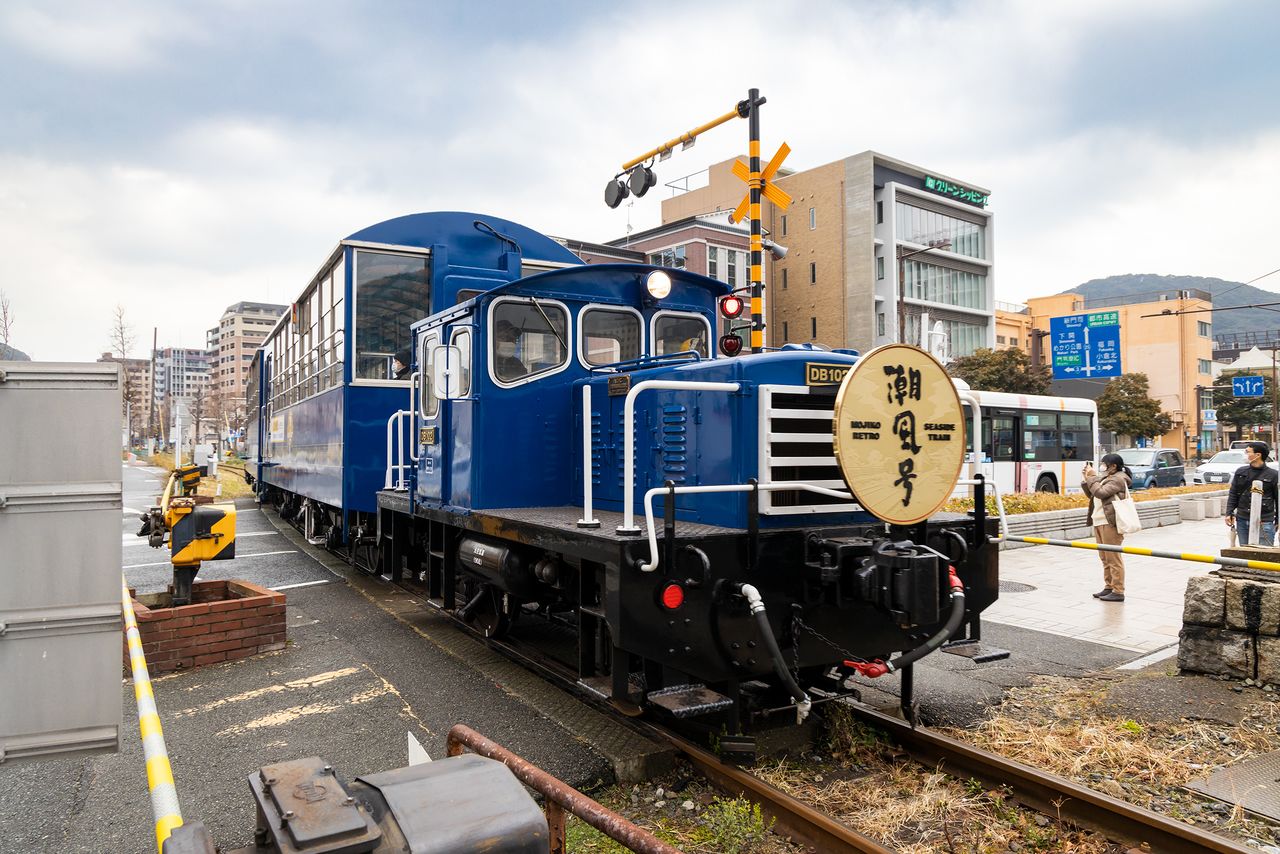 The Shiokaze trolley train is popular with visitors. The one-way fare is ¥300 for adults and ¥150 for children. One-day tickets are also available. 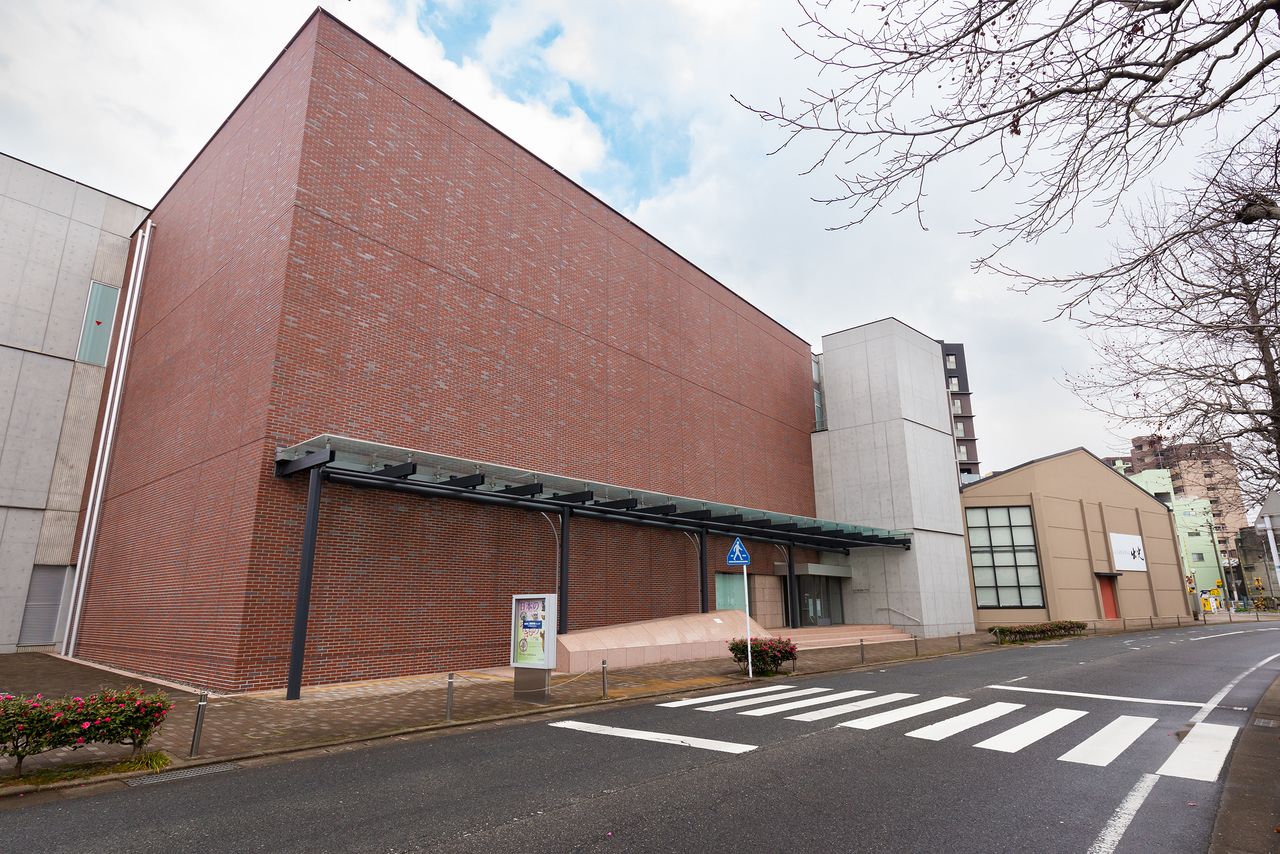 The Idemitsu Museum of Arts houses the collection of Idemitsu Sazō. Moji, formerly a major coal shipping port, later became the home of one of Japan’s leading petroleum companies.

The third stop on the line is Norfolk Square Station, named after Kitakyūshū’s sister city Norfolk, Virginia, also a port city. A huge anchor sits in the middle of the square, which offers a fine view of ships moving to and from in the Kanmon Strait. At the fourth and last stop, Kanmon Kaikyō Mekari Station, the Mekari Tide-Viewing Promenade runs nearby. It takes visitors under the Kanmon Bridge, who can then stroll in Mekari Park and return via the Shiokaze trolley train.

The Mekari Park Second Observation Deck is the best spot for viewing the Kanmon Bridge. Nearby is the mural of the historic battle of Dannoura between the Genji and Heike clans, which spelled the end of the Heike. 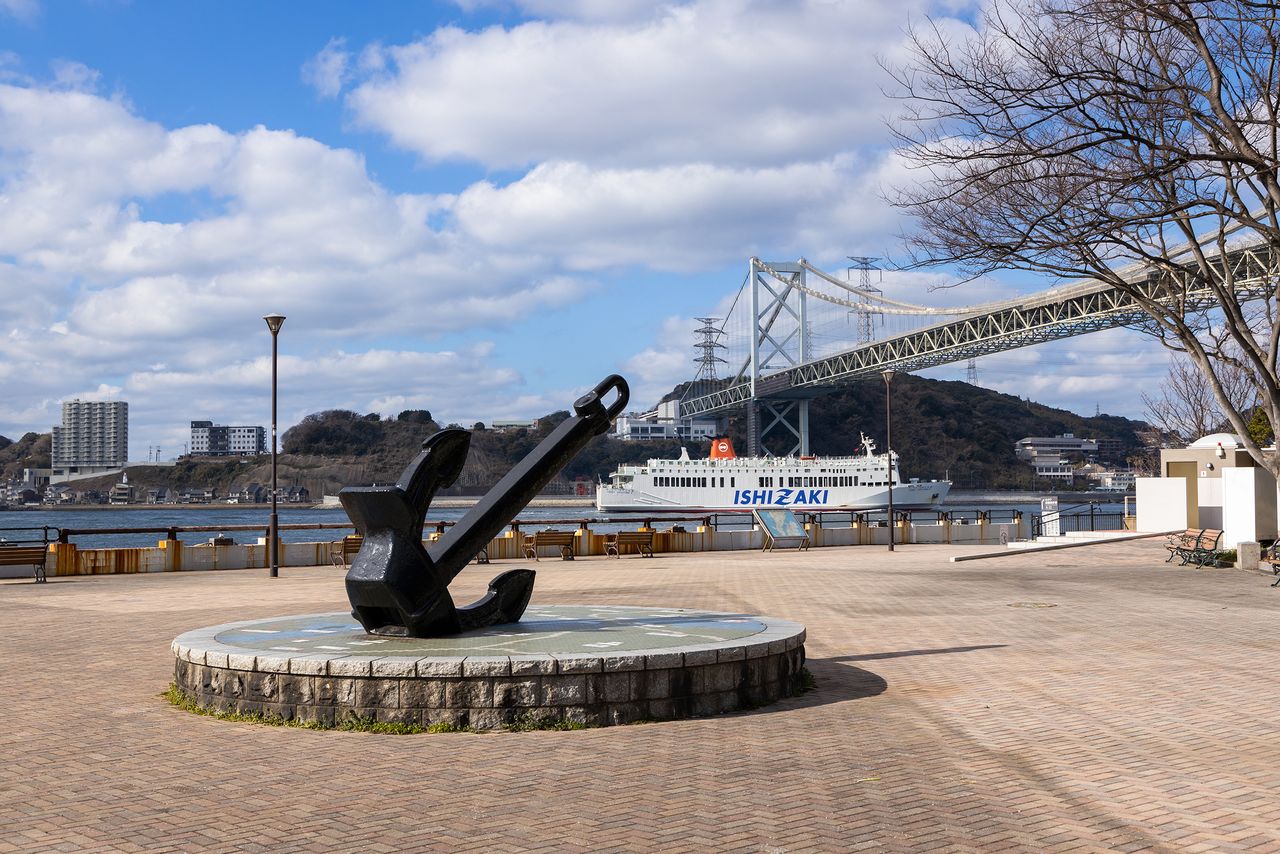 Norfolk Square is a popular picture-taking site. In the background, gigantic ships transit the Kanmon Strait. 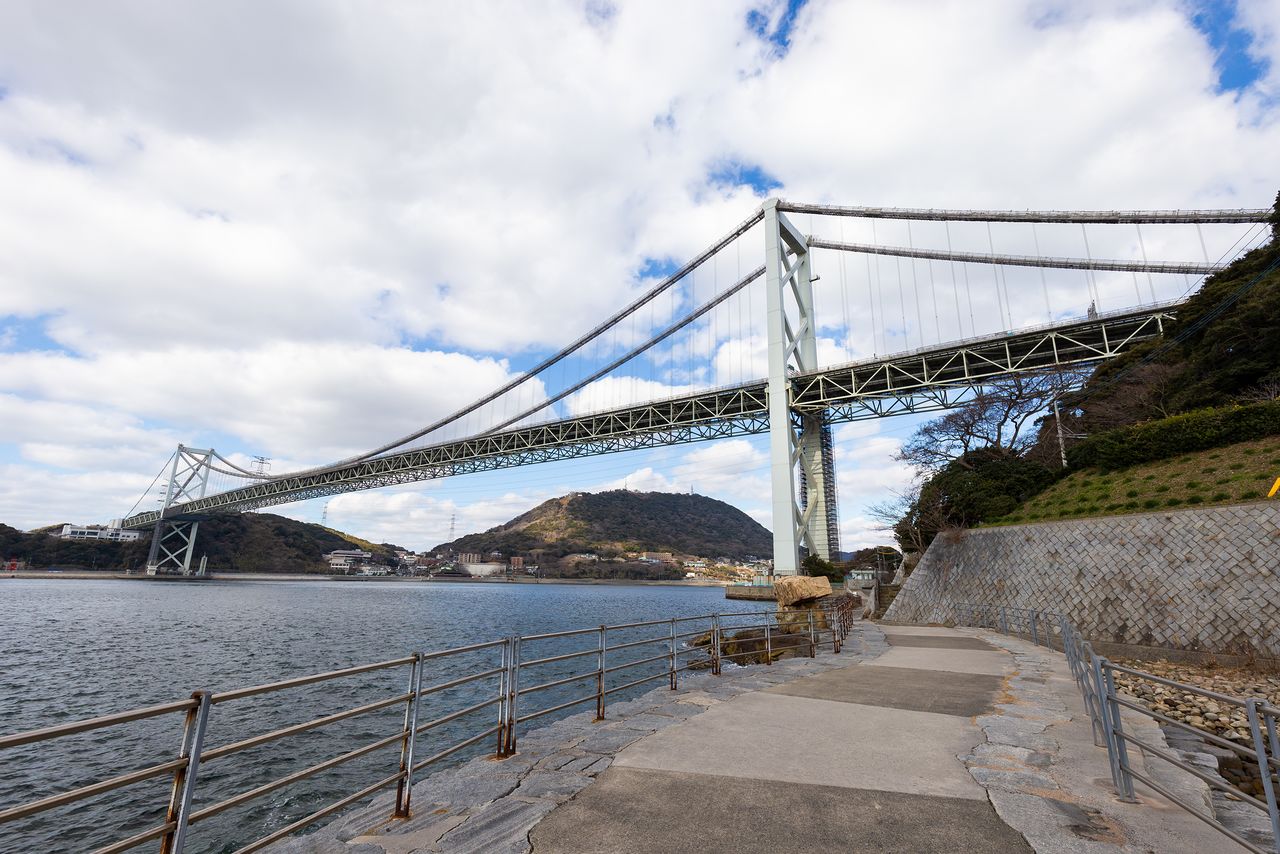 The Mekari Tide-viewing Promenade passes under the Kanmon Bridge. Across the water is Dannoura, site of a climactic twelfth-century battle, at Mimosusogawa in Shimonoseki. 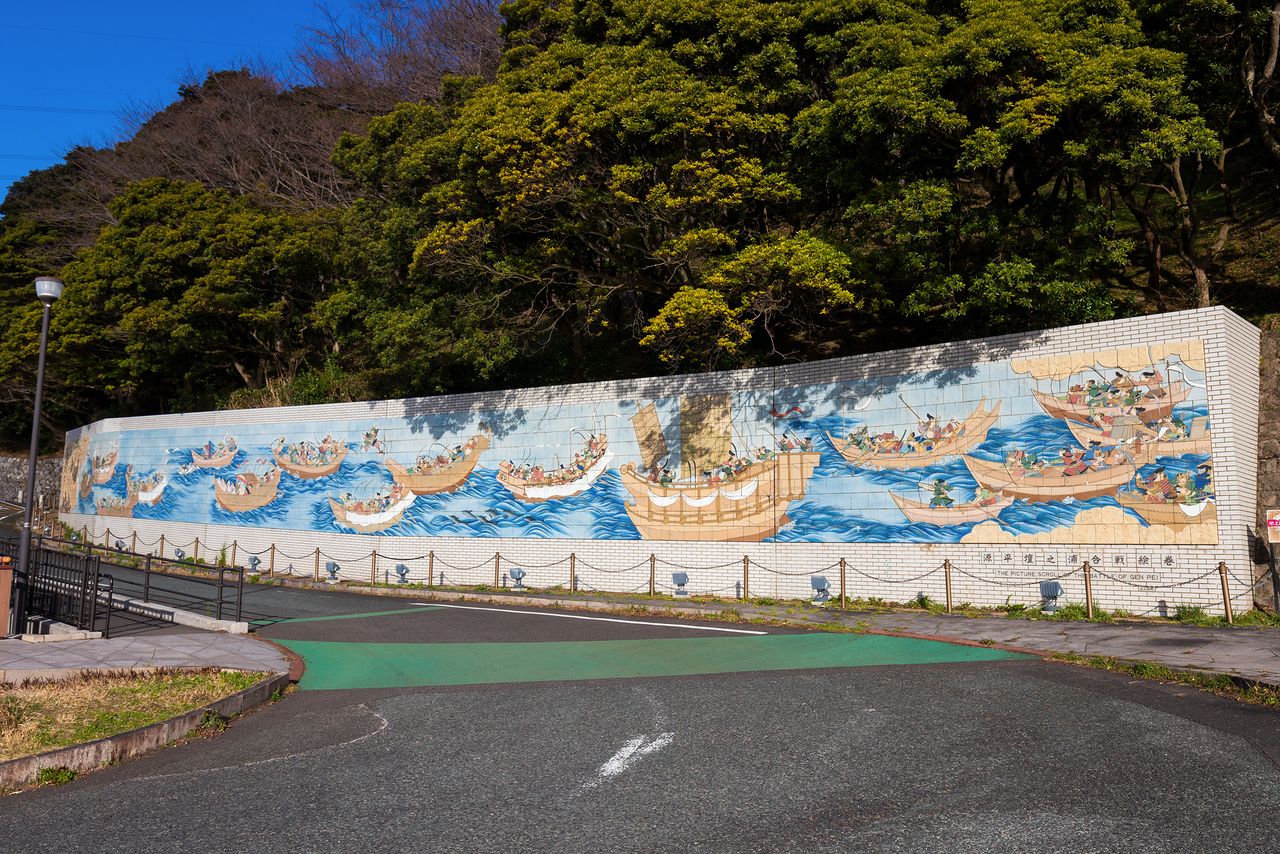 A huge mural depicting the Battle of Dannoura, made of Aritaware ceramics, is near the Mekari Park No. 2 viewing platform. 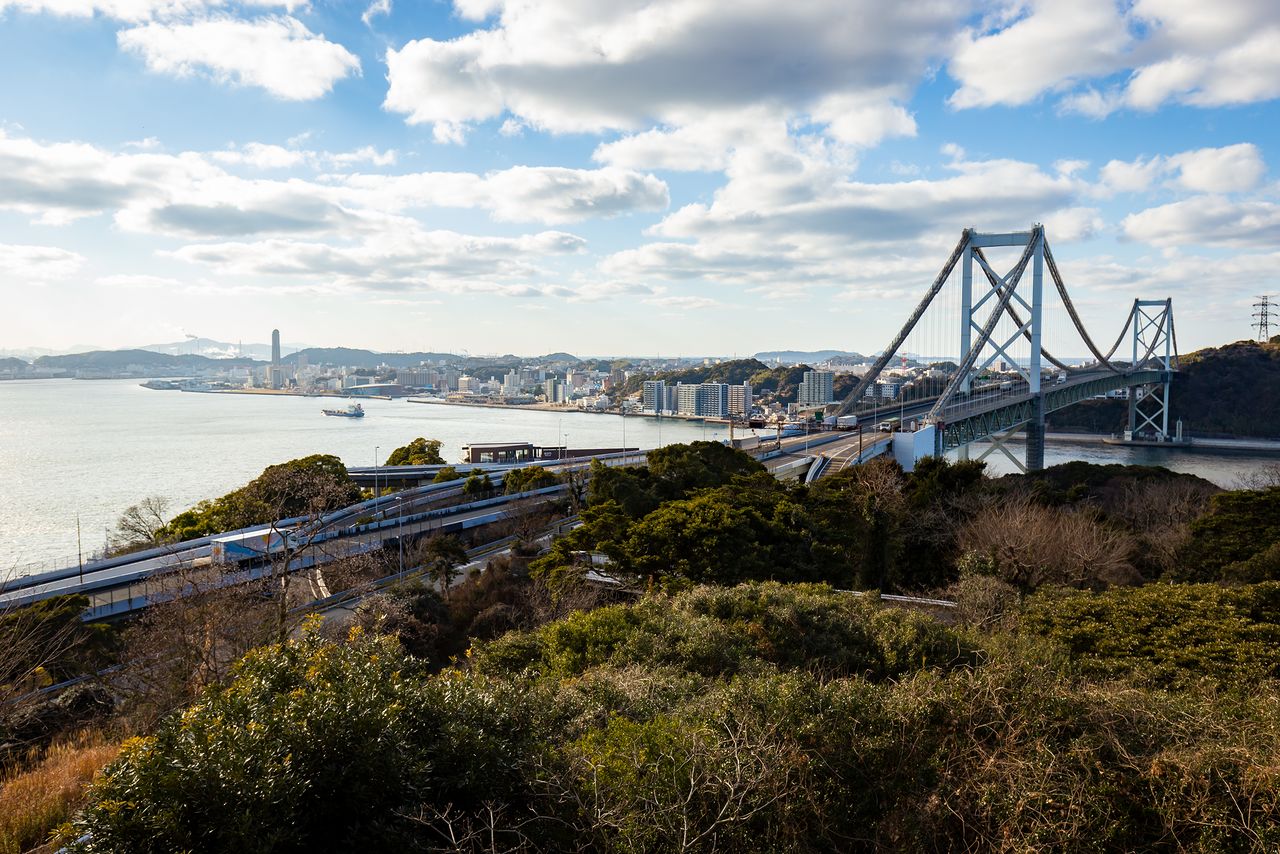 The city of Shimonoseki lies beyond the Kanmon Bridge. 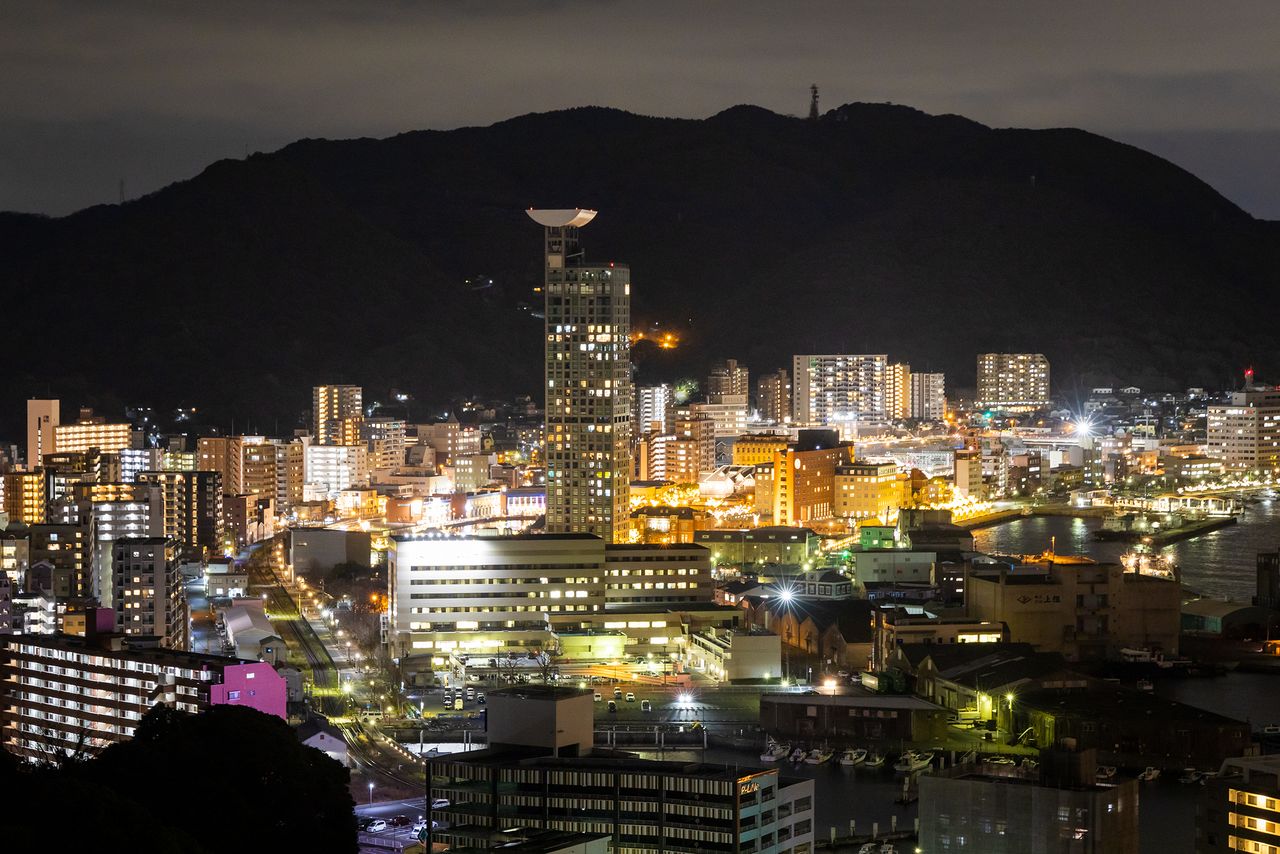