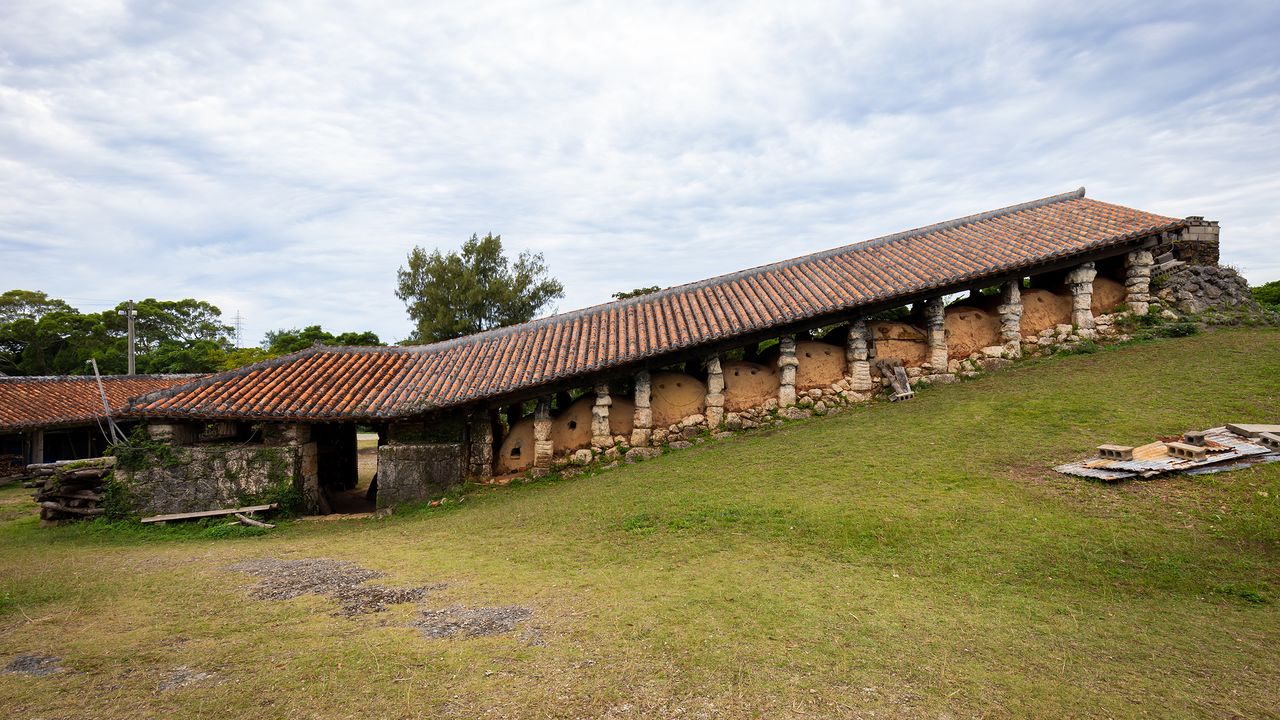 Travel Art Apr 8, 2022
The Yachimun no Sato ceramics village in Yomitan, Okinawa Prefecture, is a thriving center of the region’s distinctive pottery tradition. Visitors can tour the different shops selling ceramicware and observe such facilities as a traditional ascending kiln.

A Traditional Craft Is Born

In the Okinawan tongue, yachimun means ceramics. Okinawan pottery has a solid, rustic appearance, and often features whimsical designs. Yachimun no Sato in Yomitan, a village on the main island of Okinawa, is a ceramics mecca with some 20 pottery studios calling the site home. Visitors can enjoy exploring studios in search of shīsā, Okinawa’s iconic lion-like guardian figures, or the perfect ceramic dish. They can also view the ascending kiln with its majestic red-tiled roof. 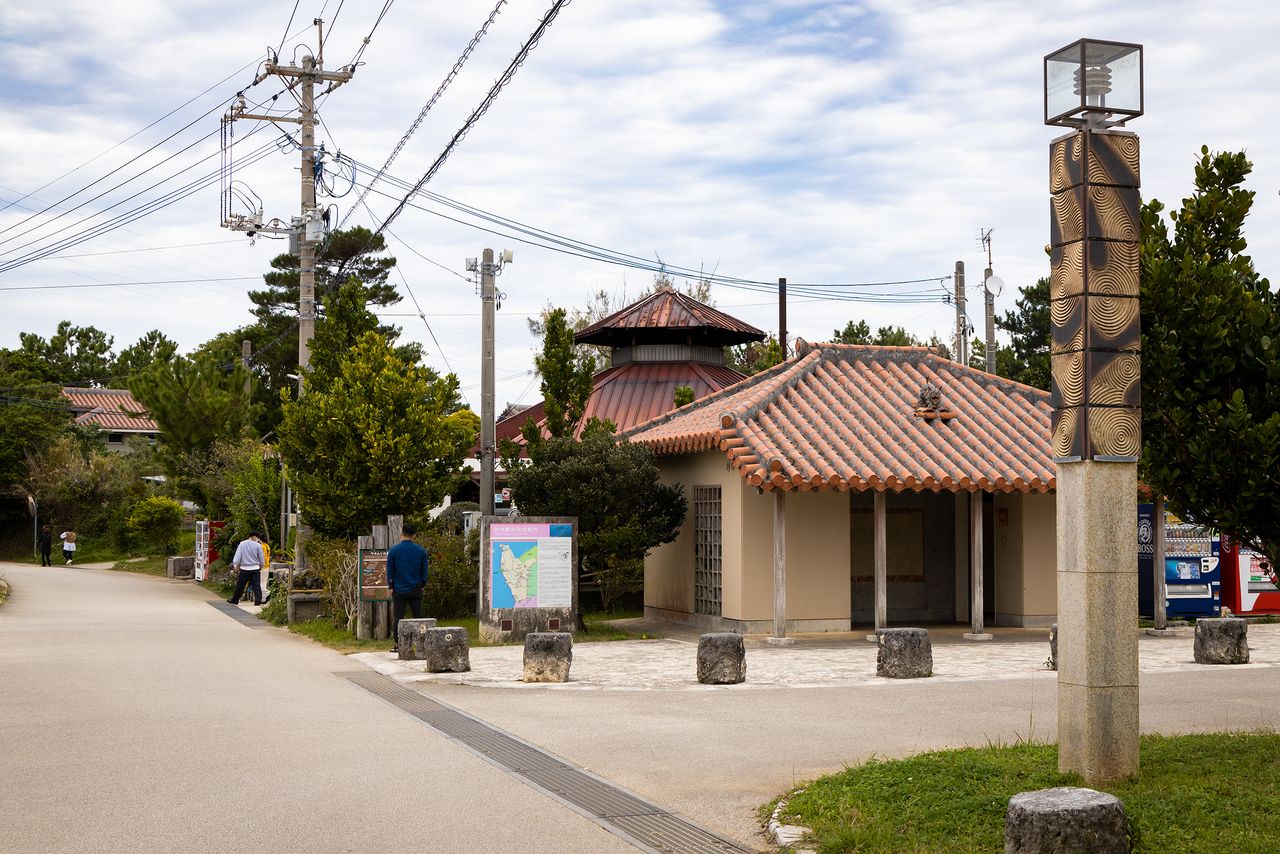 Yomitan has plentiful clay, water, and firewood, all essential for making ceramics. 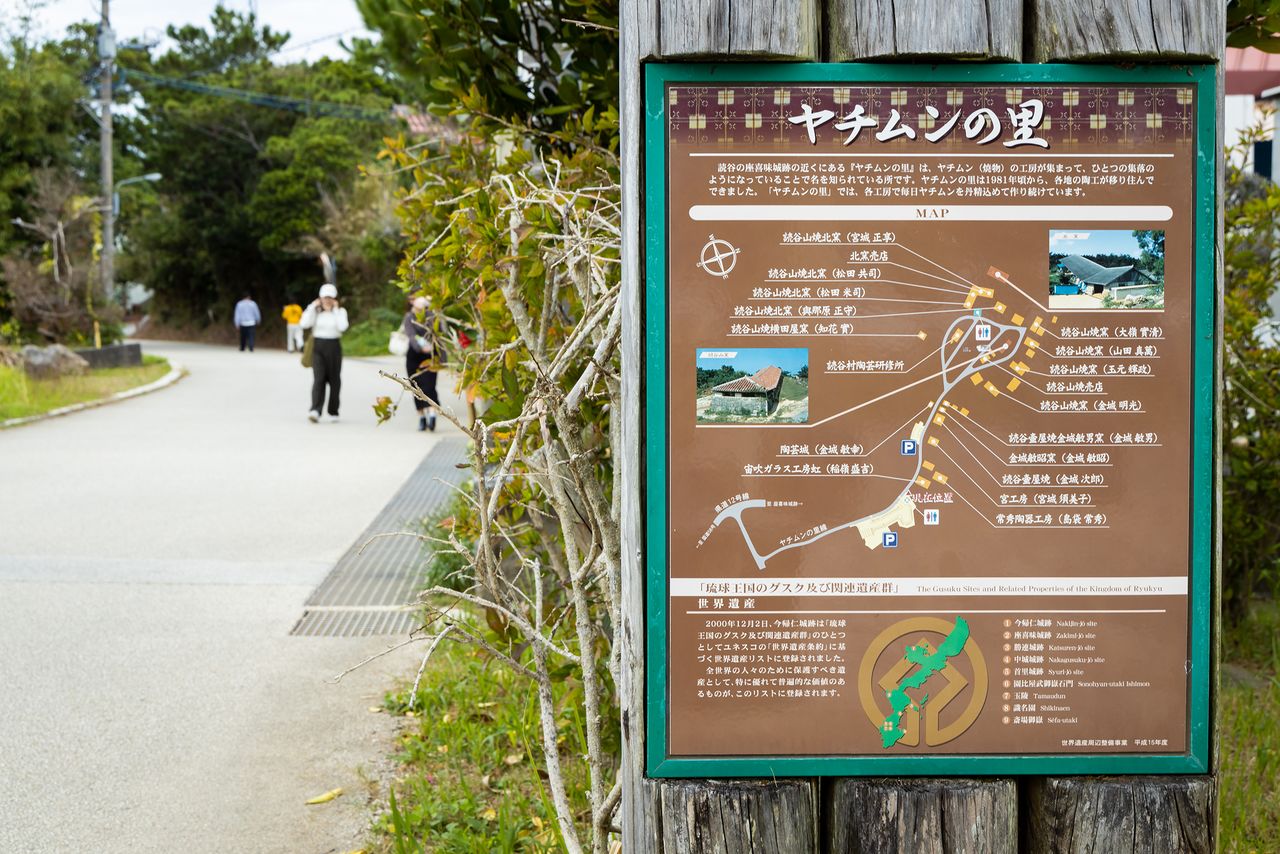 A map showing the various studios and other attractions. Visitors walking at a brisk pace can tour the village in about an hour and a half. 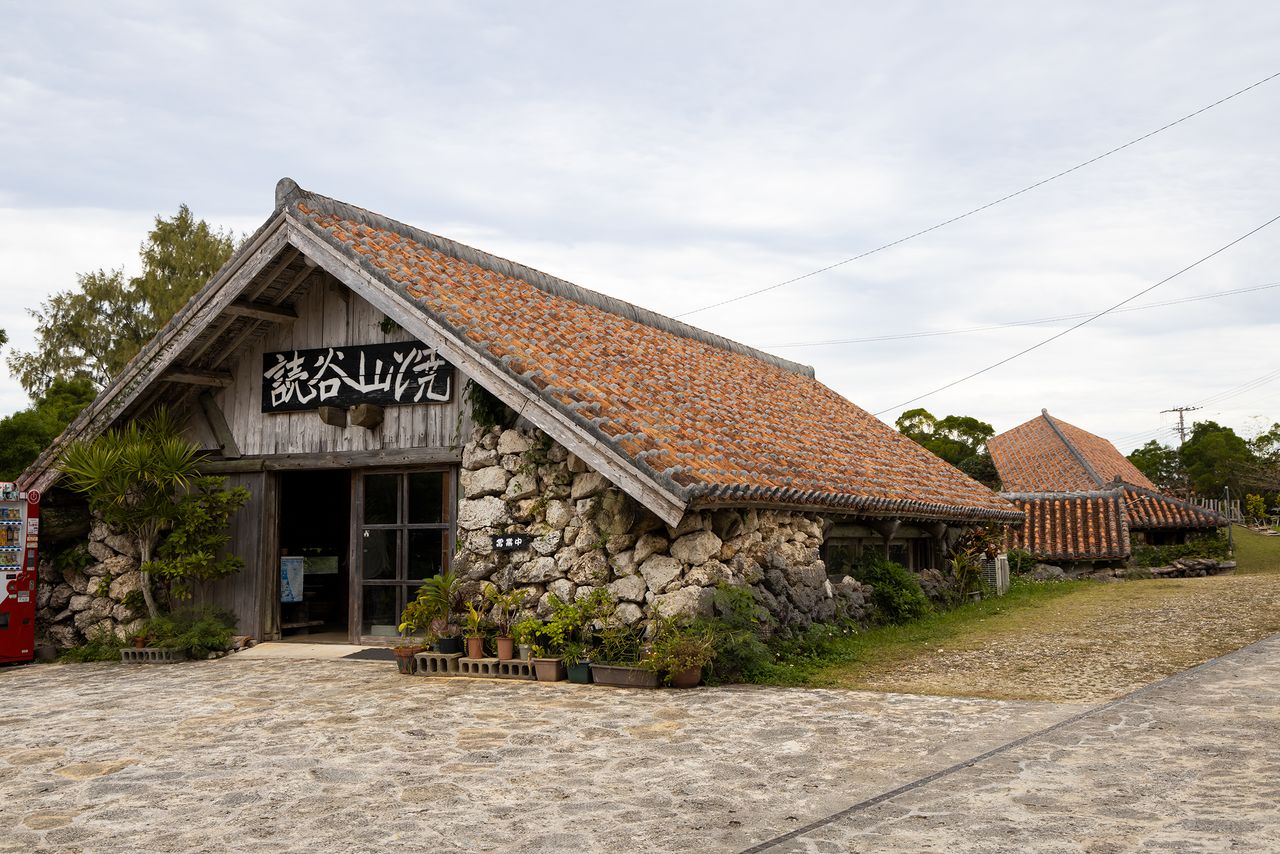 The Yomitanzan-yaki cooperative shop is in the center of the village. In the background is the ascending red-tiled roof of the “climbing kiln.”

The Ryūkyū Kingdom, established in the fifteenth century in what is now Okinawa Prefecture, traded heavily with its neighbors on the Asian continent. Ryūkyū ceramics developed with the influence of Chinese, Korean, and Southeast Asian pottery traditions, which contributed new techniques and improved on local technologies. The foundations of today’s yachimun were laid by Korean artisans based in the Satsuma domain (present-day Kagoshima Prefecture) who came to Okinawa in the early seventeenth century.

To encourage ceramics production, in 1682 the rulers of the kingdom settled all the potters on the island of Okinawa in Tsuboya, now part of the city of Naha, near the Asato River. The location was well suited for sourcing materials and transporting finished goods. It also gave its name to Tsuboya-yaki, a representative type of Okinawa ceramics. In addition to presenting ceramics to the royal court, the Tsuboya potters made containers for exporting the distilled liquor awamori and marine products. Their ceramicwares were also widely used by ordinary folk. 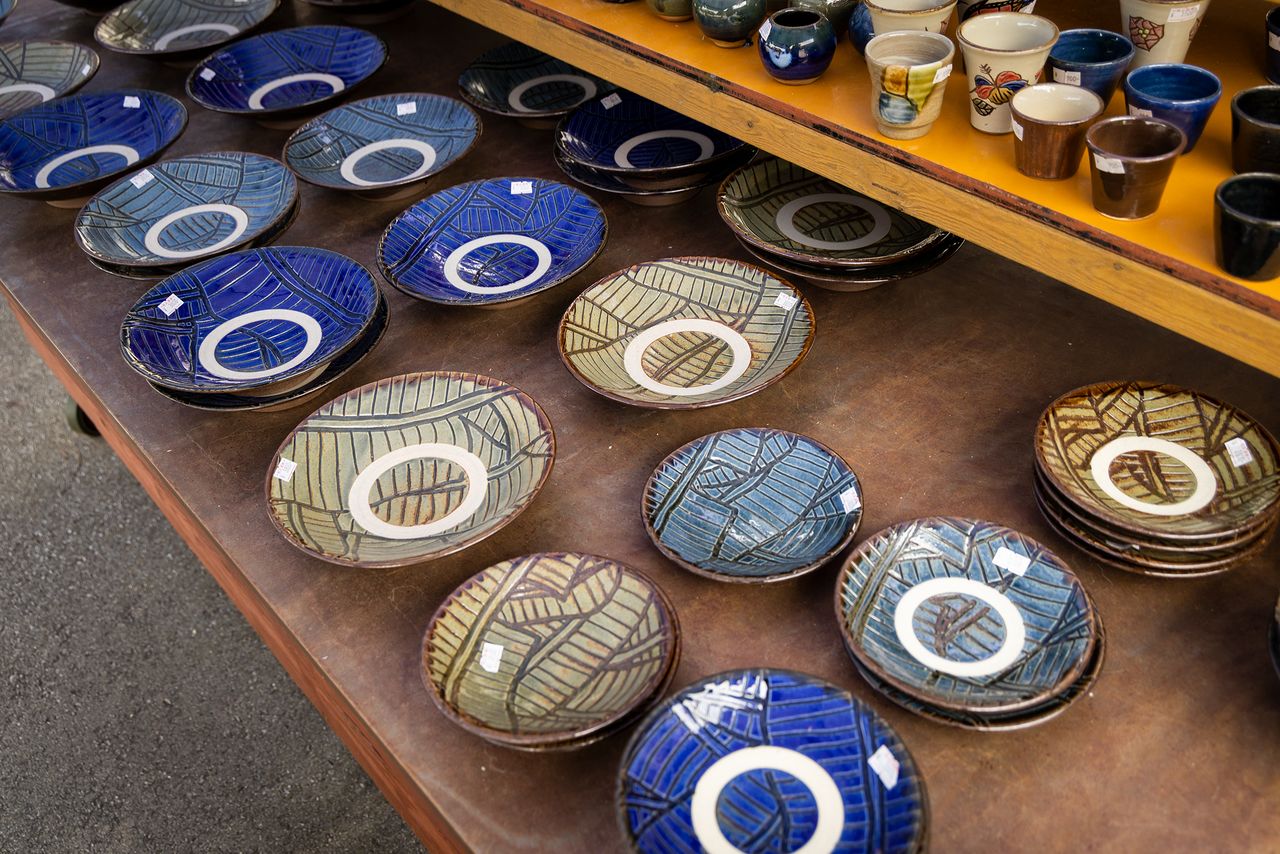 Okinawa’s yachimun often feature a white ring in the center. As plates are stacked for firing, the foot of the vessels on top wears away the glaze, creating an accent to the pattern.

A New Home for Yachimun

Rapid postwar urbanization soon engulfed Tsuboya, which is a stone’s throw from Naha’s bustling main street, Kokusai-dōri. By the early 1970s, residents began complaining about the smoke from Tsuboya’s kilns, and anti-pollution rules adopted by the city were introduced to curb the use of wood as a fuel in firing.

While some potters switched to gas-fired kilns, many were loath to abandon the traditional firing technique. Among the defenders of using firewood was Kinjō Jirō, who would later become Okinawa’s first-ever Living National Treasure. Around this time, authorities were laying plans for a cultural facility on land in Yomitan vacated by US armed forces stationed in Okinawa, and a proposal was made to build an ascending kiln there. When Kinjō decided to move his kiln to Yomitan in 1972, other potters followed him, leading to the creation of Yachimun no Sato around 1980. 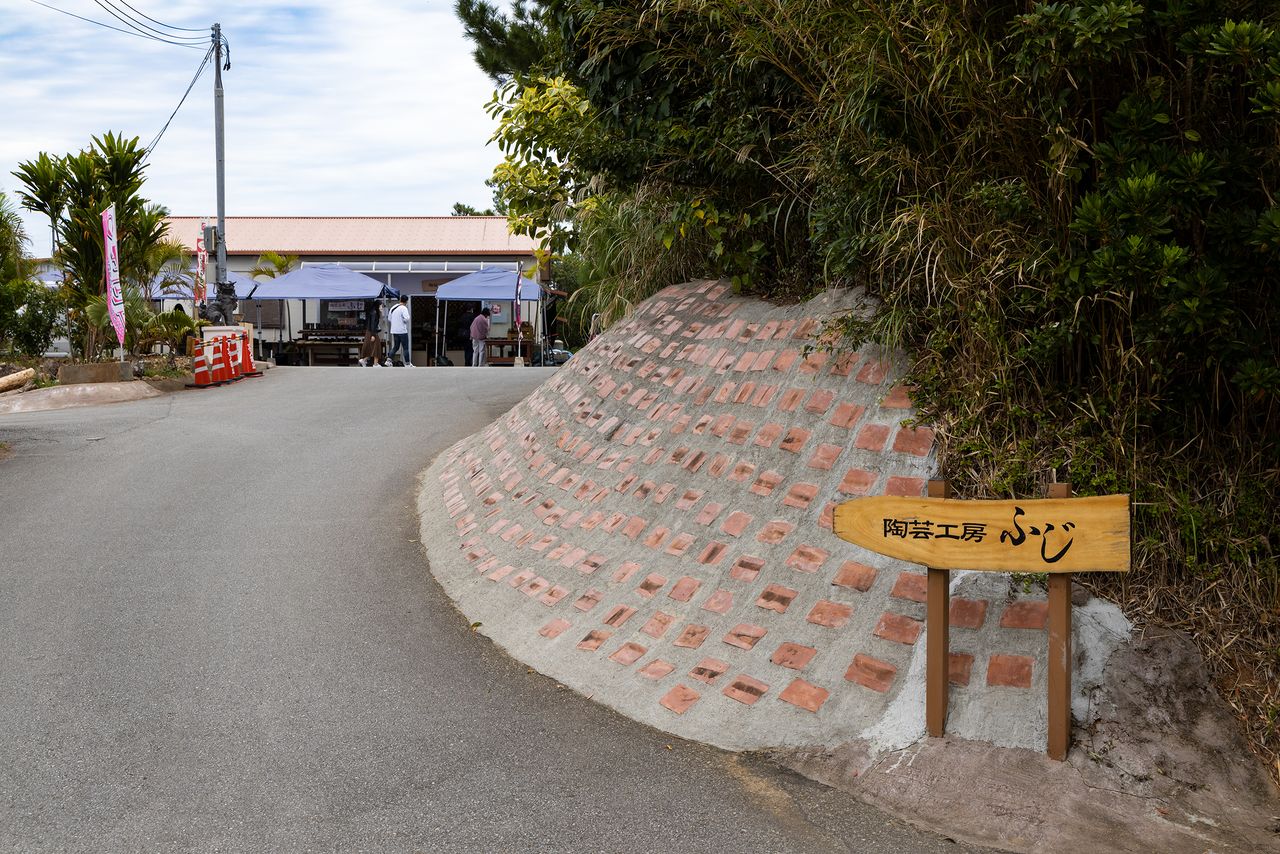 Some Yachimun no Sato studios are operated by relatives of Kinjō, including the gallery Tōgei Kōbō Fuji run by Fujioka Kanako, a granddaughter of the famed potter. 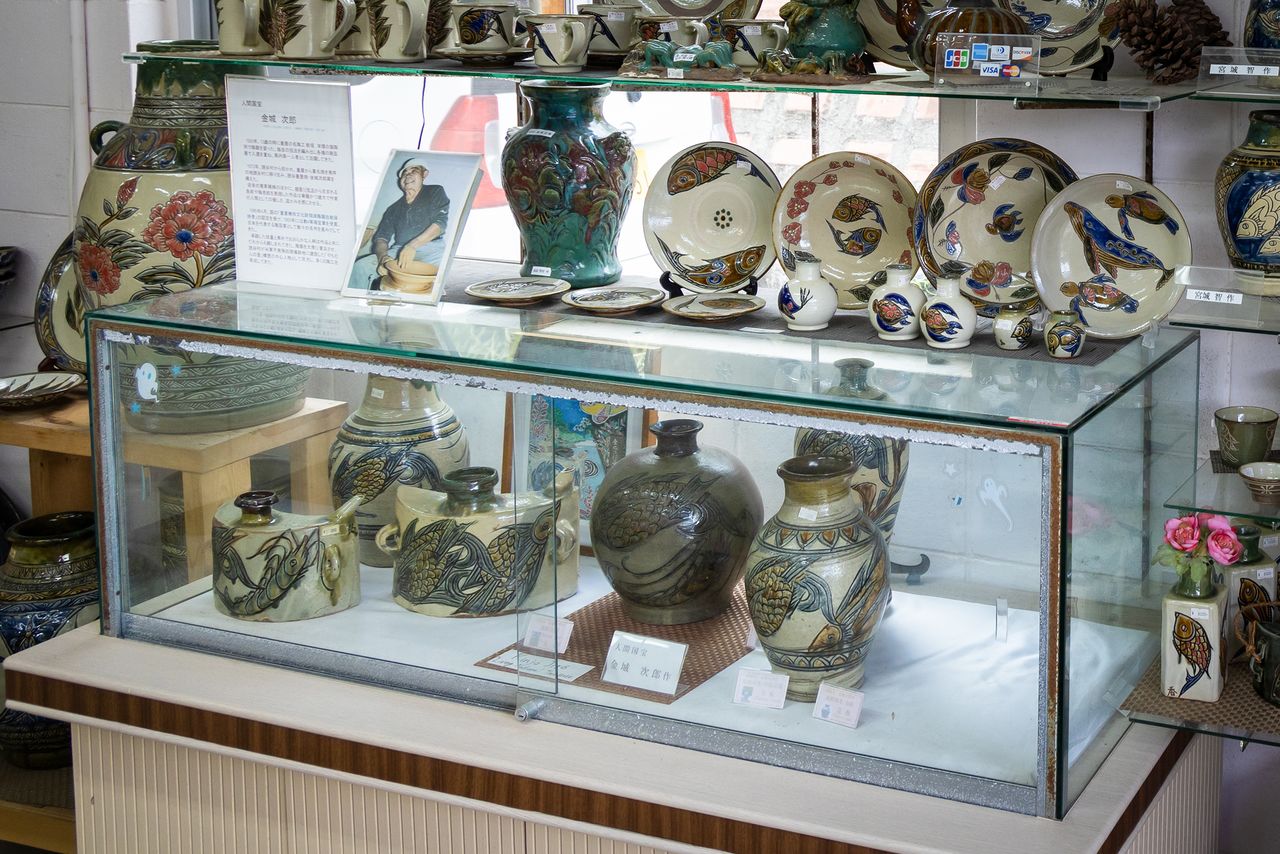 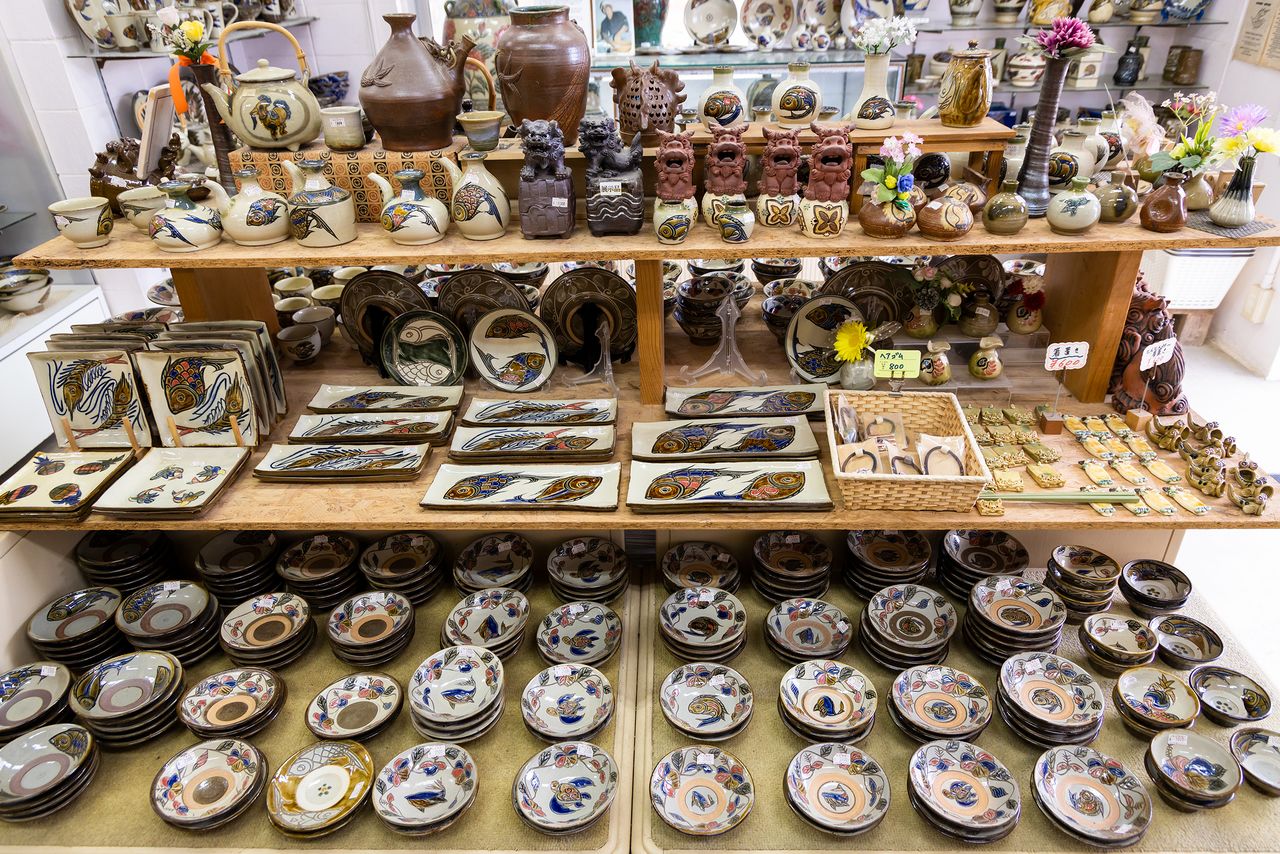 Plates with fish motifs, which Kinjō excelled at making, form an eye-catching display. Shīsā in all shapes and sizes are also for sale.

Yachimun no Sato’s most distinctive feature is the “climbing kiln” erected in 1980. The heat from firewood lit in the bottommost chamber of this nine-chambered kiln, erected on a slope, rises upward to fire the pots and plates inside. A second kiln, the 13-chambered Yomitanzan-yaki north kiln, is used by younger potters and has been in operation since 1992. Both kilns have cooperative shops where visitors can peruse wares created by the village’s pottery artisans.

Today, Tsuboya is known as the cradle of Okinawan ceramics and Yomitan the mecca to which visitors flock. While many of the wares artisans produce at Yachimun no Sato feature traditional designs, there are also pieces notable for the free expression and creativity of their creators. The cooperative shops gather a wide array of ceramics under one roof, but strolling to look in at the various studios in the village is worthwhile too. 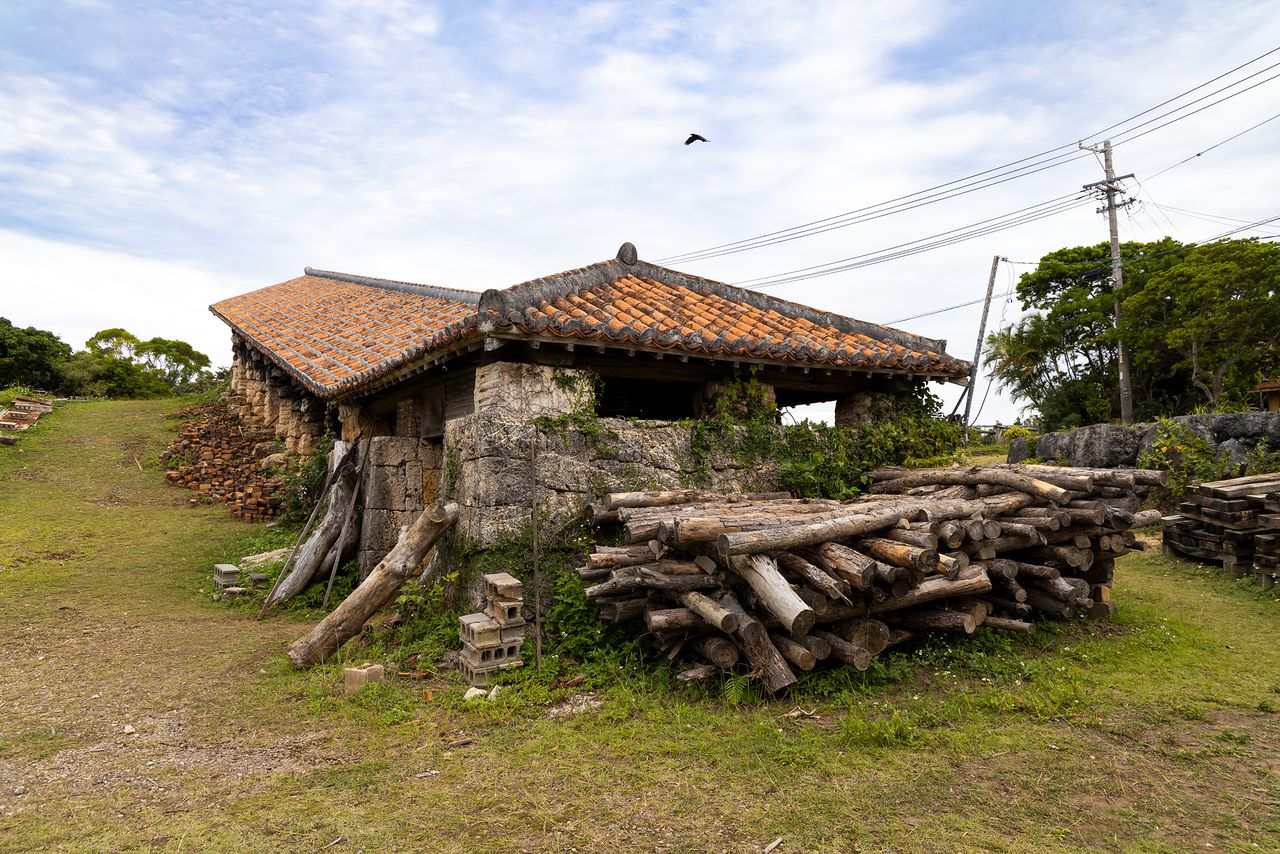 The Yomitanzan-yaki cooperative kiln is topped by a traditional red-tile roof. The kiln is at the center of the village and is near several pottery studios. 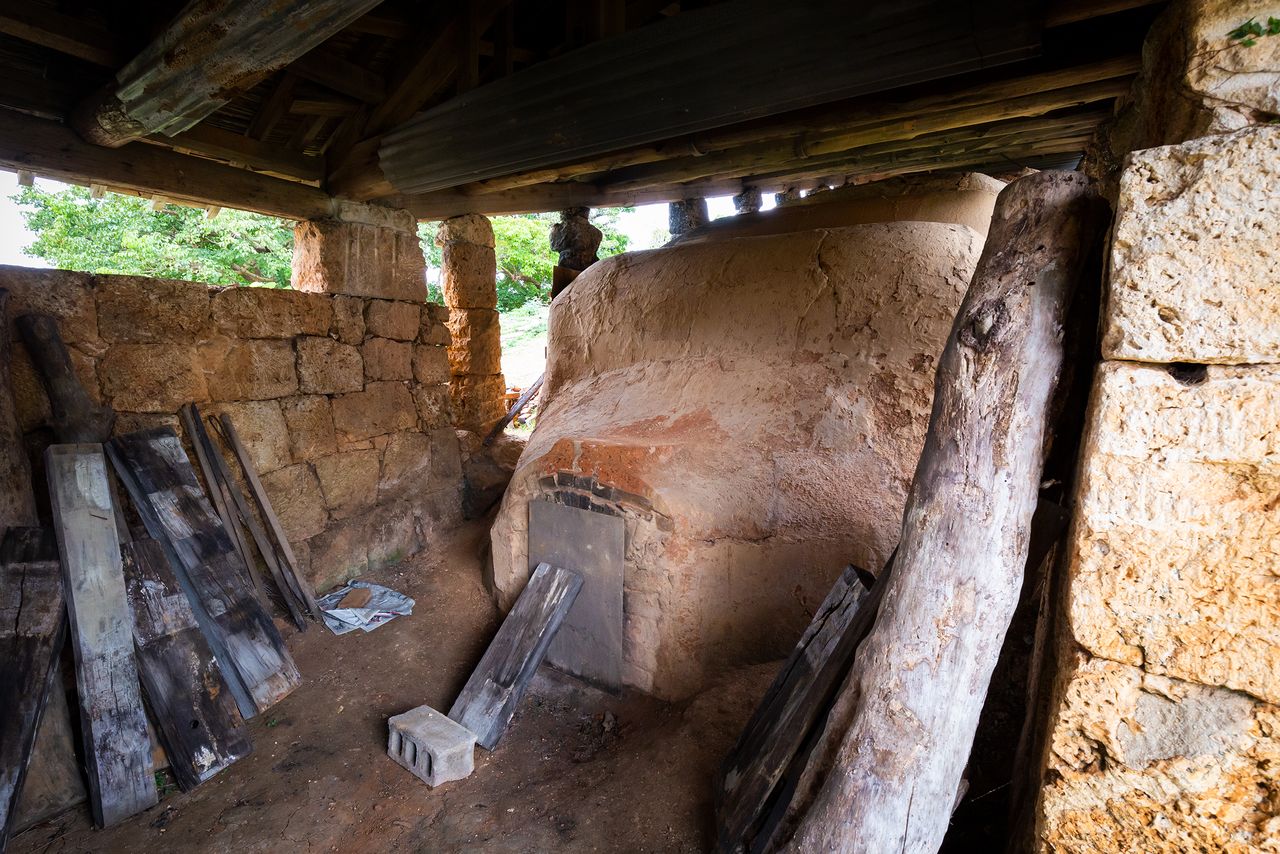 The heat from firewood fed from the stoke hole in the bottommost chamber of the kiln travels upward to fire the pots and plates inside. 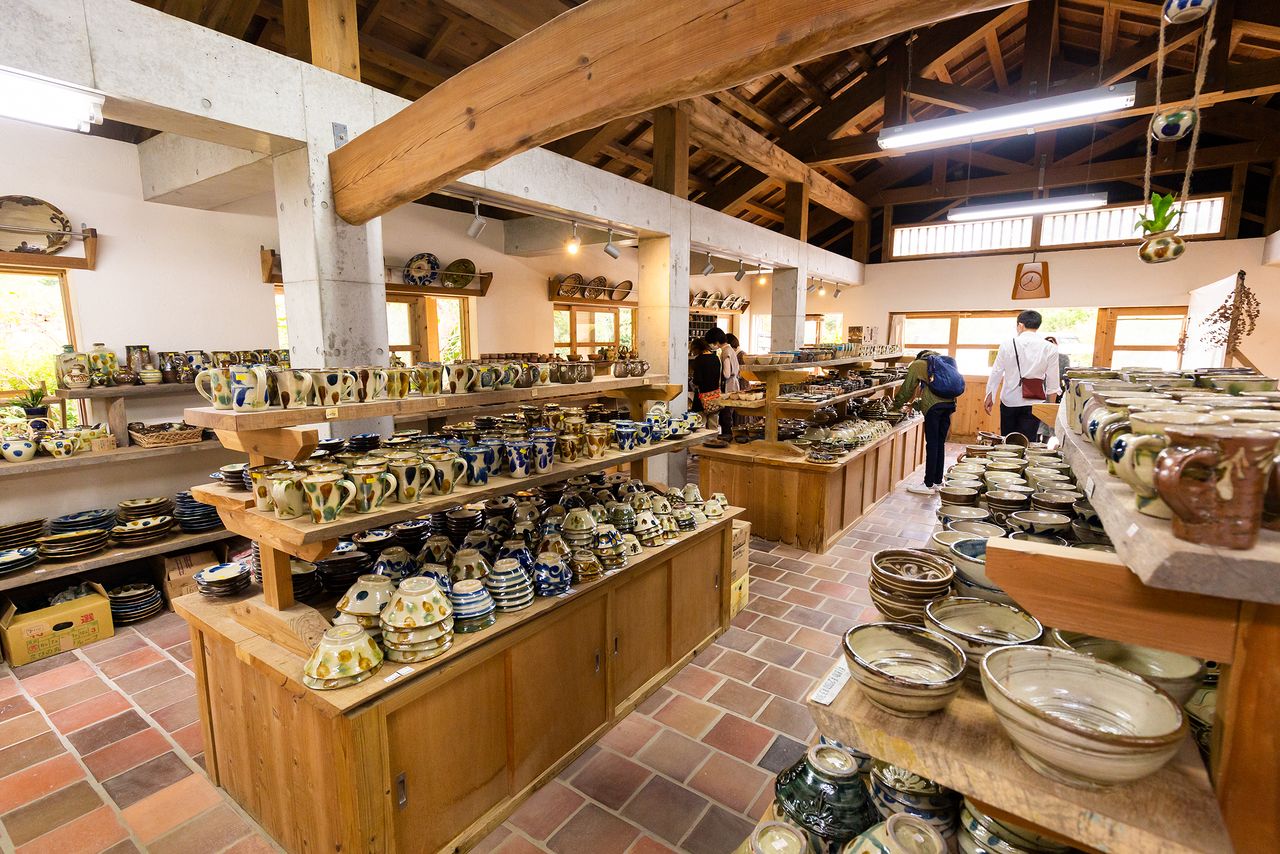 The north kiln cooperative shop brims with ceramicware of all types. 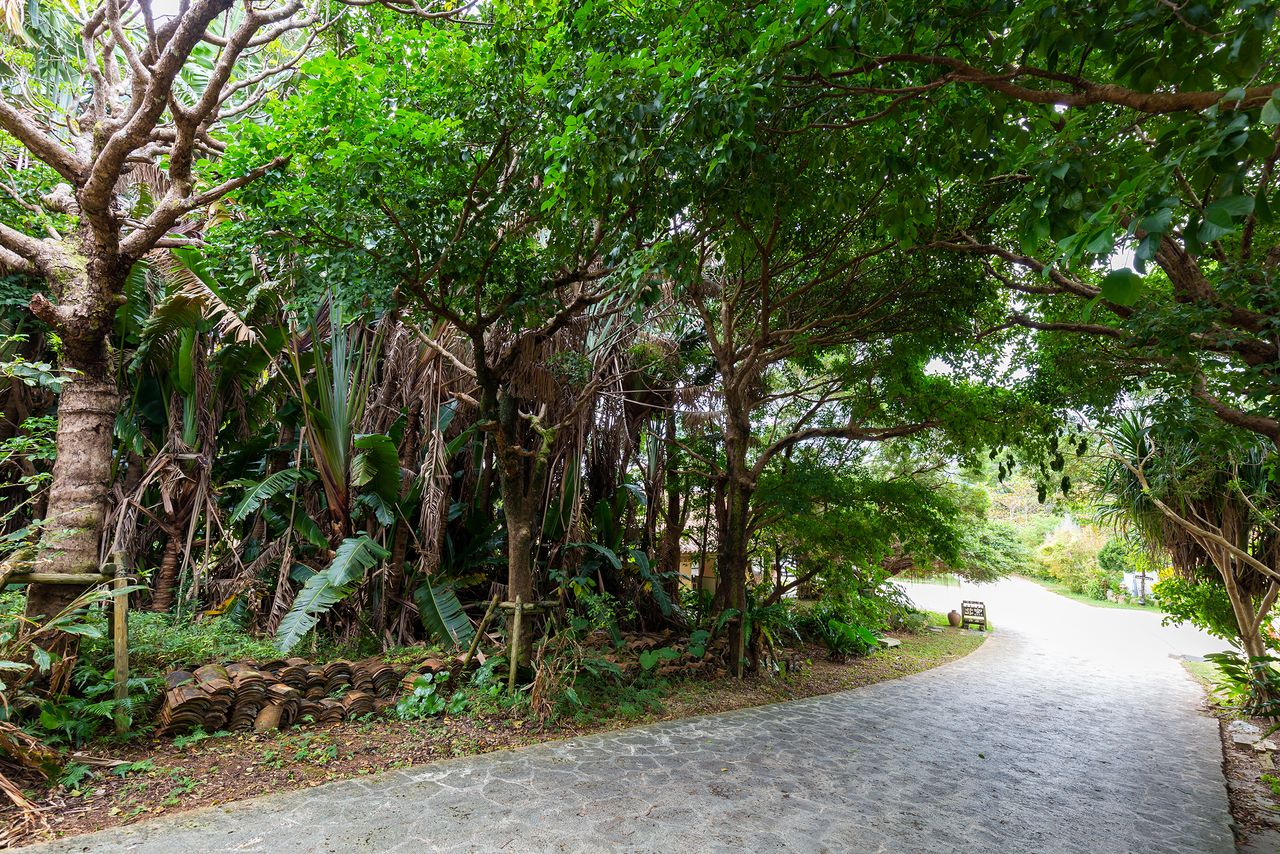 A tree-lined path winds through the village.