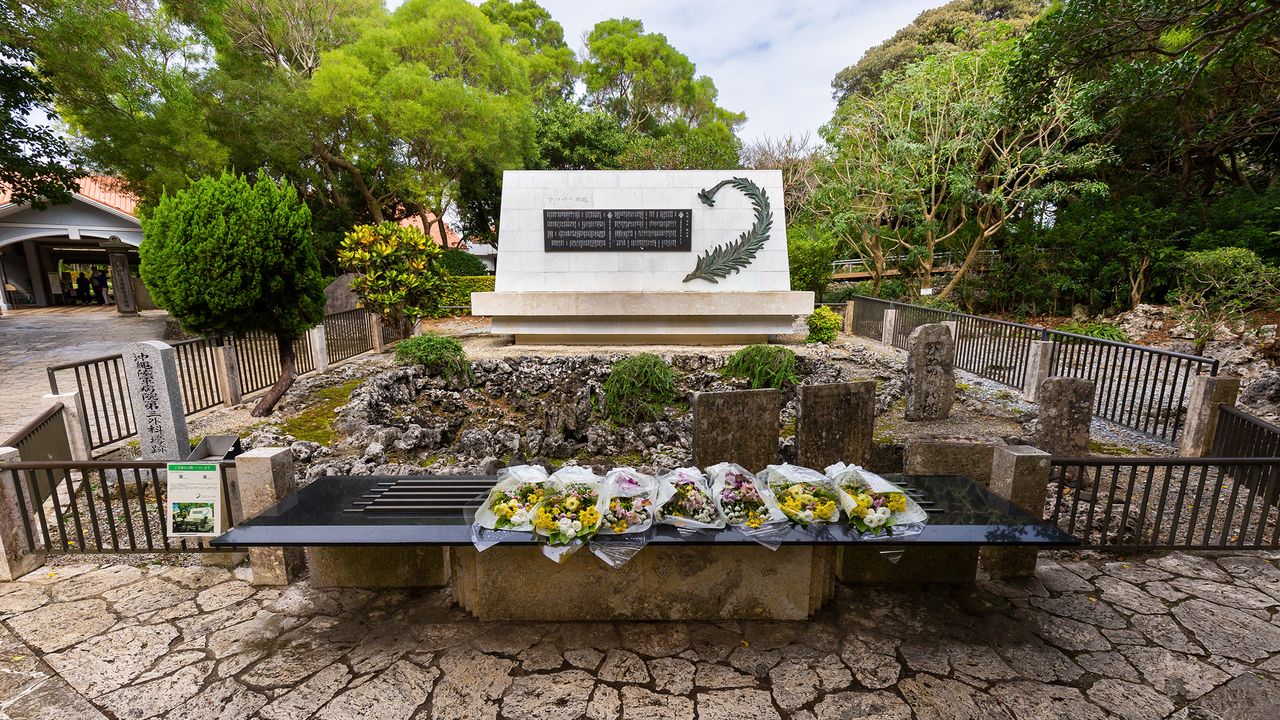 Reflecting on the Horrors of War: Okinawa’s Himeyuri Cenotaph and the Himeyuri Peace Museum

Travel History May 13, 2022
The southern part of the island of Okinawa saw fierce land battles during World War II. The Himeyuri Cenotaph and the Himeyuri Peace Museum at Ihara in Itoman tell the heart-wrenching story of the Himeyuri student corps, female students and teachers mobilized as nursing personnel in the closing months of the war, and sends out a fervent message of peace.

“Himeyuri” describes two Okinawan women’s schools, the Okinawa Normal School teacher training college and the Okinawa No. 1 Girls’ High School. The name derives from the school magazines of the two institutions, which were combined in 1916. Located in Asato, a district in the city of Naha then called Mawashi, the schools drew the most gifted students on the island, and pupils and alumnae alike shared pride in the name Himeyuri.

In the closing days of World War II, land battles raged on Okinawa, and the Himeyuri students were mobilized to care for sick and wounded Japanese soldiers. Working in unspeakable conditions, many of the women and girls lost their lives as the conflict raged. The Himeyuri Cenotaph stands in Itoman, in the southernmost part of the island, on the site of a former field hospital. The makeshift facility, secreted in a cave, is where 80 people, including 42 students and teachers from the Himeyuri student corps, died when attacked by US forces. 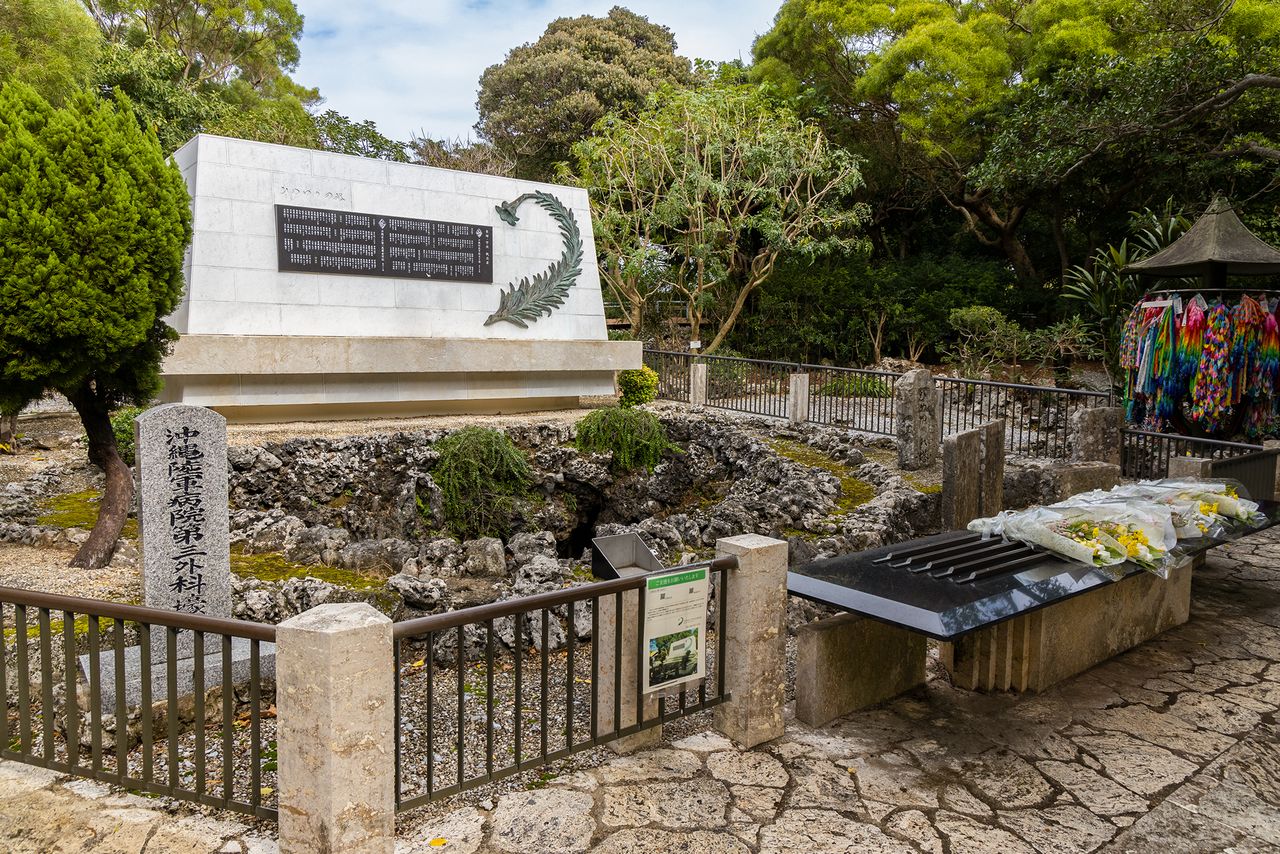 The Cenotaph is near the cave housing the Ihara No. 3 field hospital. 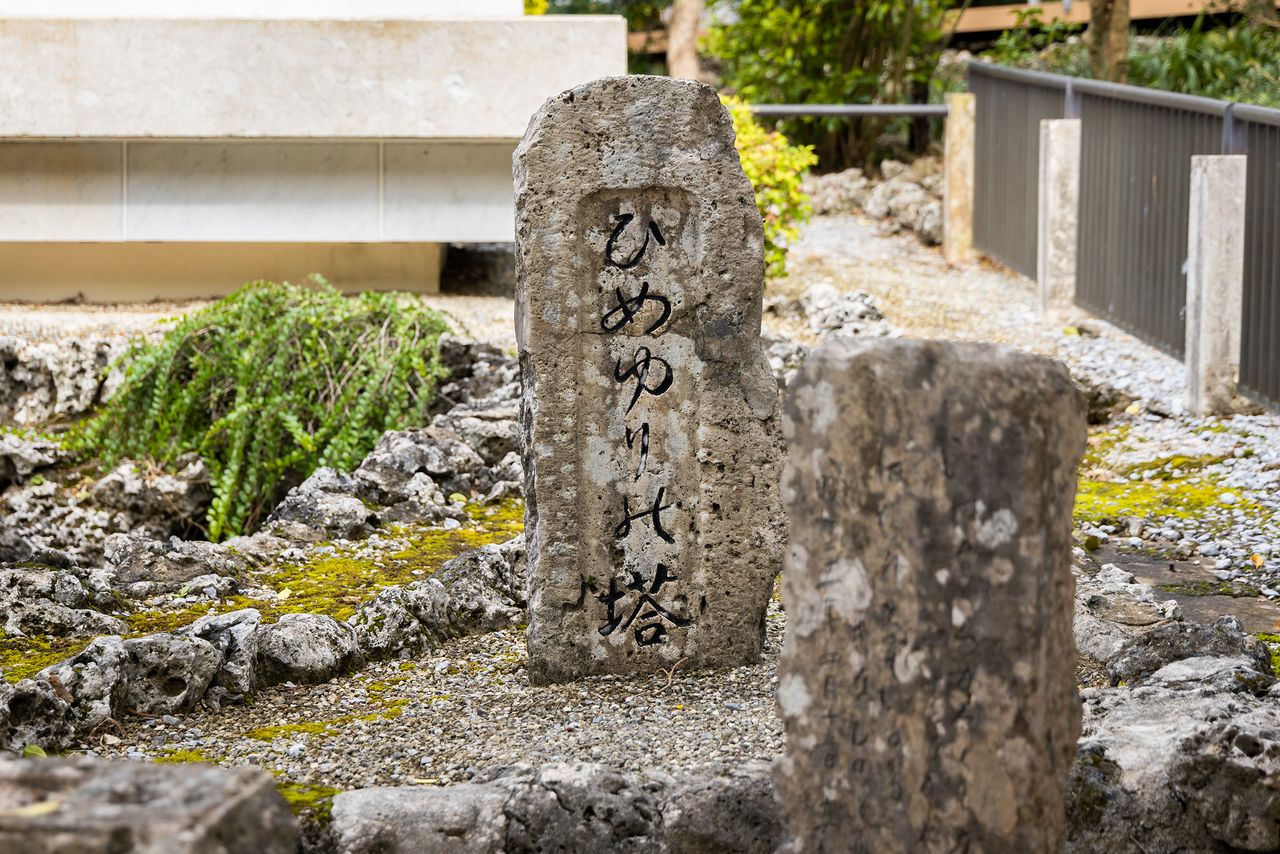 The original cenotaph, erected in 1946.

Near the cenotaph stands the Himeyuri Peace Museum. Modeled on the main building of the two schools, it exhibits materials documenting the days before the war, a diorama of the field hospital, and messages from Himeyuri corps survivors. Himeyuri, known today throughout Japan, conveys the tragedy of war, the invaluable weight of human life, and the vital importance of peace. 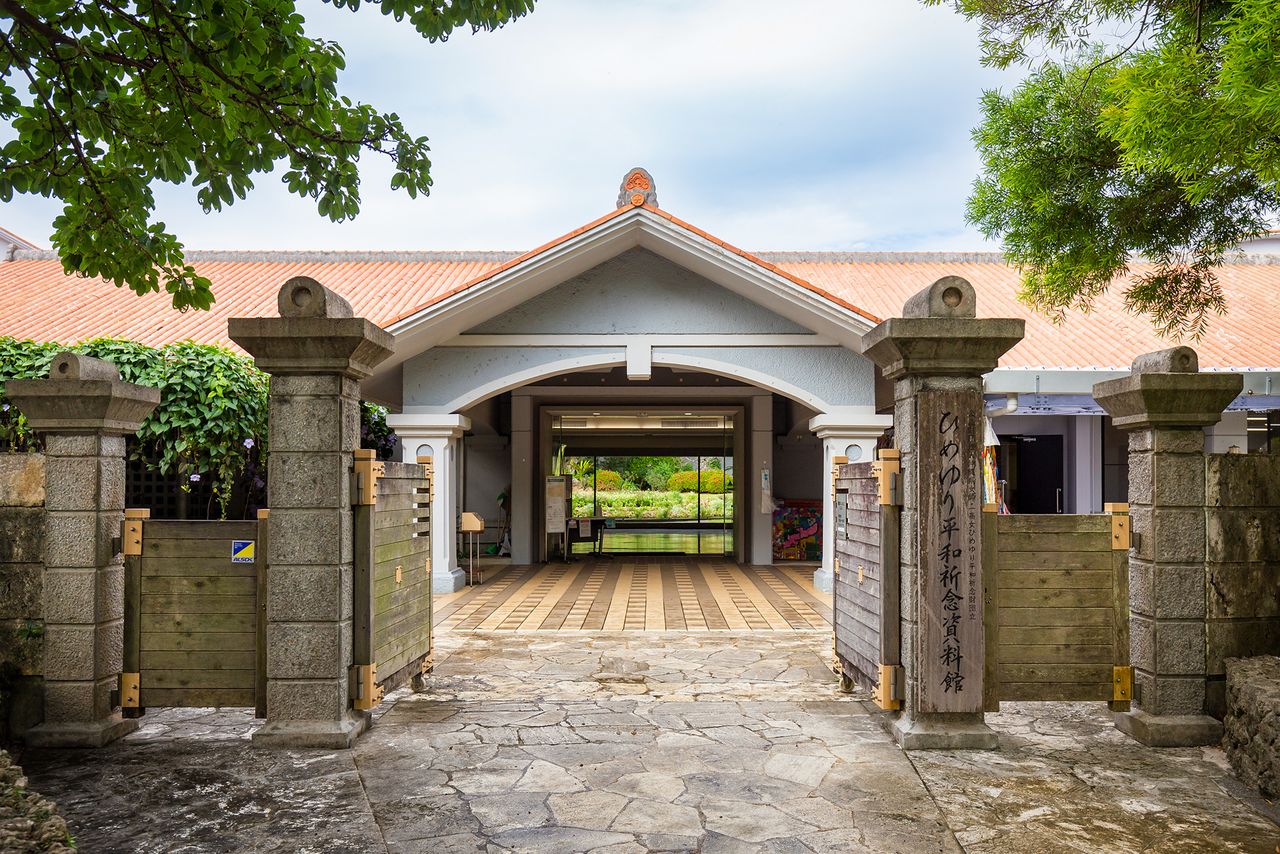 The Himeyuri Peace Museum opened in 1989. Along with exhibits is an inner garden dedicated to the memory of the teachers and students who perished.

Visitors to the museum are greeted by a photo of the class of 1944, who graduated one year before the Battle of Okinawa. Although Japan was at war, the smiling faces of the students express their hopes of a bright future. However, it was to be the last class to graduate from the schools. 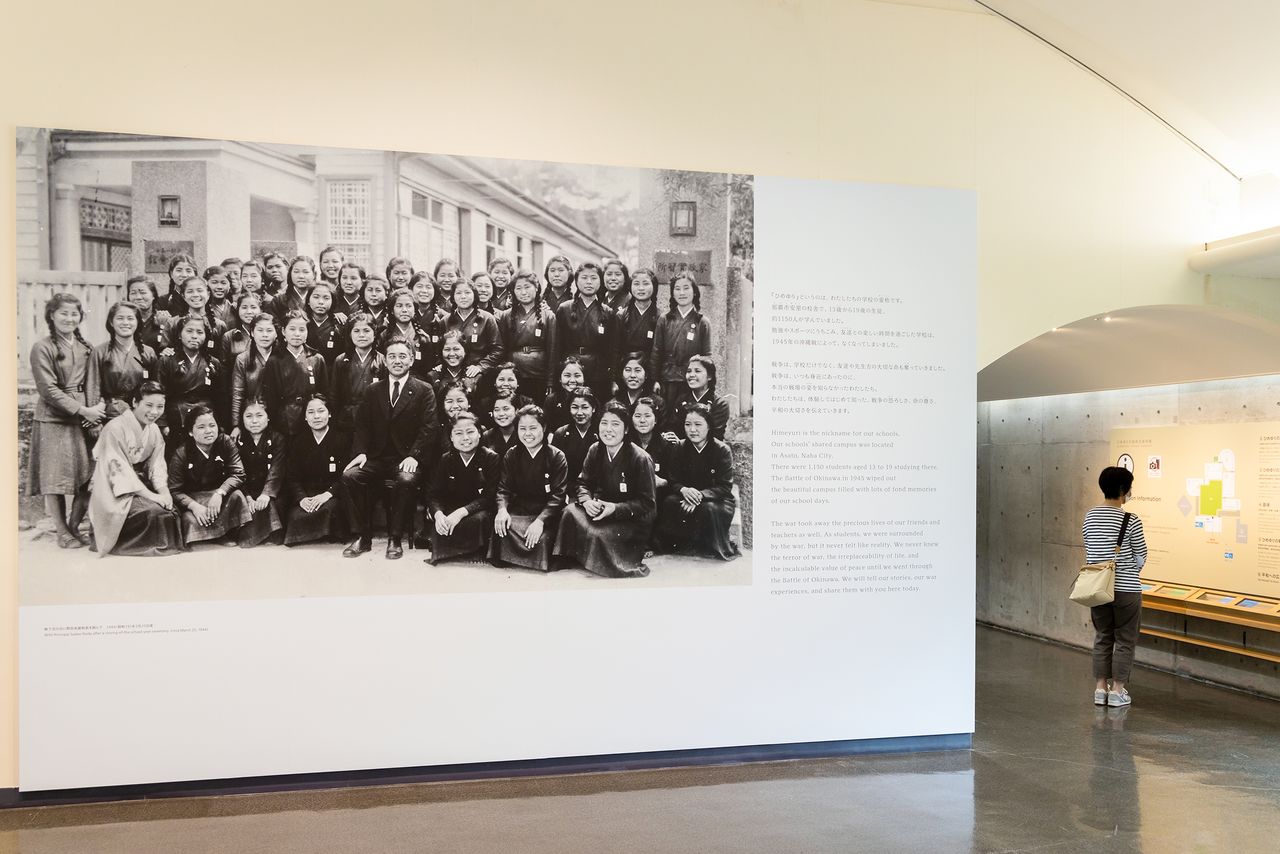 The graduating class are all smiles in this photo in the museum’s lobby. 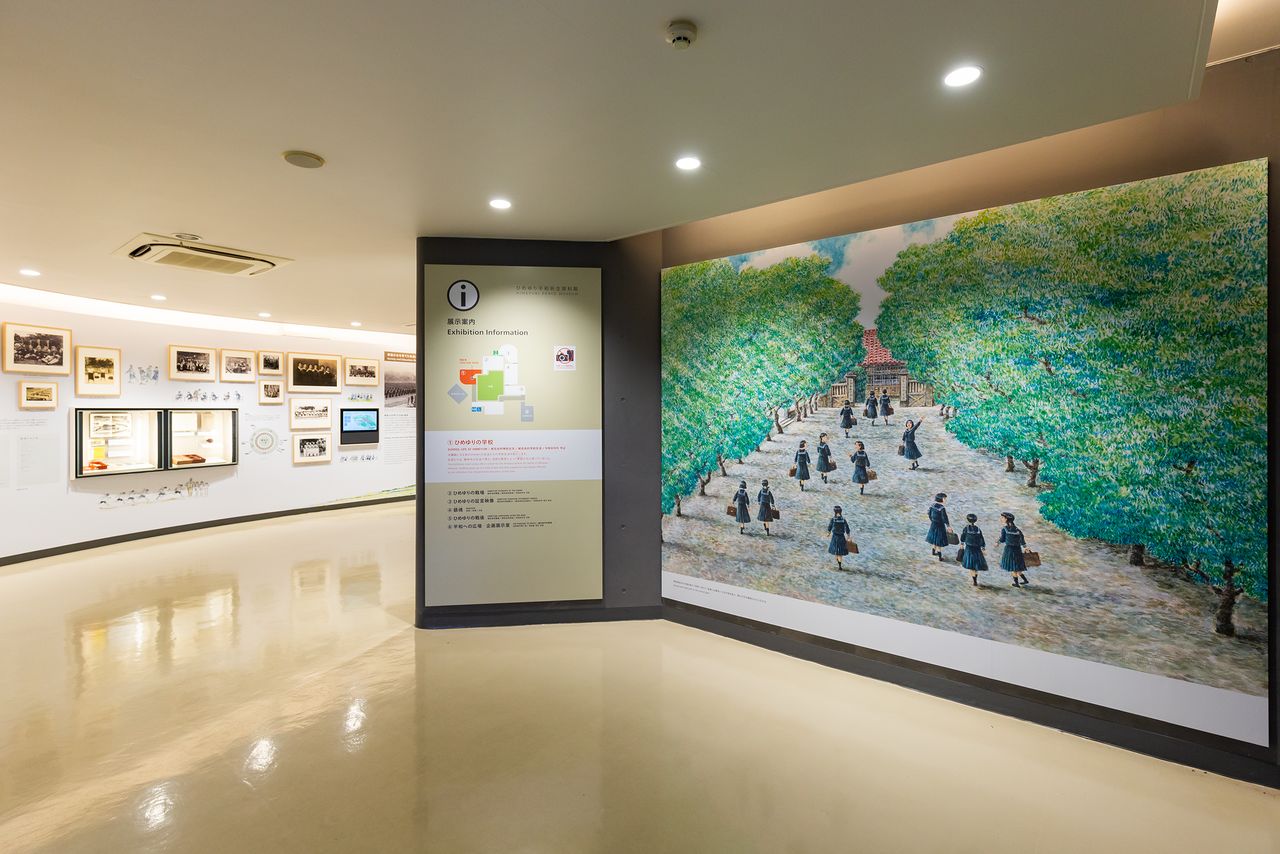 The first exhibit hall displays photos and illustrations of school life at the two institutions.

The United States began its assault on Okinawa in earnest on March 23, 1945. Late that night, 222 students aged 15 to 19 and led by 18 teachers, headed five kilometers southeast of Naha to a field hospital in Haebaru. The students believed they would be working in a safe, Red Cross-protected building. Instead, they encountered a rudimentary facility of bunk beds set up in a cave dug into the side of a hill.

American forces landed on Okinawa on April 1. The field hospital was soon flooded with casualties arriving from the front lines. In addition to looking after the wounded, corps members had to carry food and water, deal with human waste, and bury the dead. To access supplies, they dodged bullets as they left their hiding place, carefully hauling back food and water, and toiling night and day in the noisome cave. 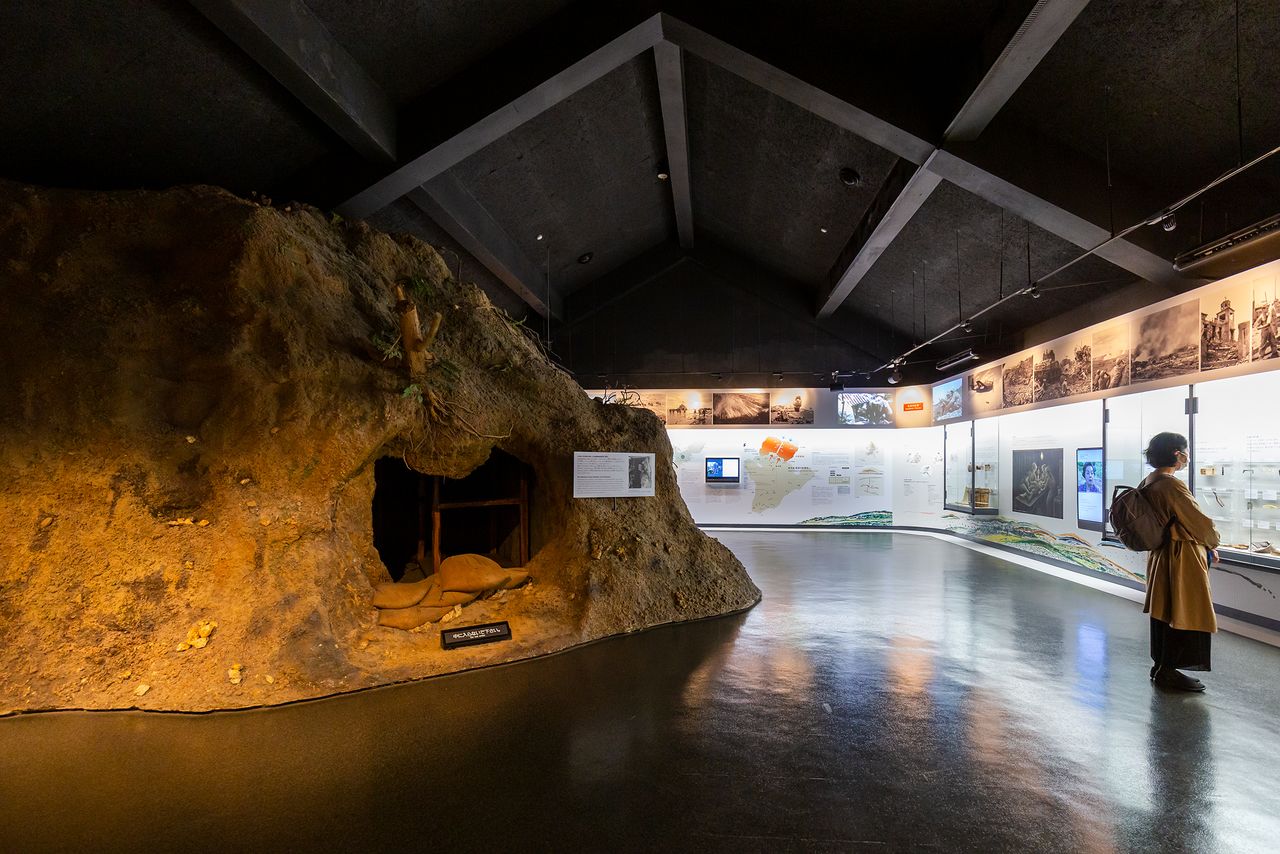 The second exhibit hall describes the corps’ tasks and includes a diorama of the Haebaru cave used as a hospital. There were nearly 40 such caves in the area.

Many Lives Lost in the South

To separate the northern part of the island from the south, US forces gained a foothold in the middle of the island and headed south for the Shuri district of Naha, where the Imperial Japanese Army’s high command was located. As the Americans neared Naha in late May, the order was given to abandon the Haebaru field hospital and move south. The student corps, together with patients who were able to walk, moved toward the city of Itoman at the southern end of the island. The area around Ihara in Itoman is dotted with caves, and the field hospital was relocated among six of them, but quickly ceased to function due to lack of supplies.

On June 18, as the US Army drew nearer to Ihara, the student corps was ordered to disperse and simply instructed to do as they saw fit. Indoctrinated to believe that enemy forces were savages, corps members most feared being taken prisoner. Hiding in forests and rocky crevices, the young women continued to make their way toward the coast, but many were killed by gunfire as they did so. In an equally tragic turn, the memorial to members of the student corps on the coast at Arasaki notes how teachers, panicked at the thought that they would be killed by Americans, used hand grenades to kill themselves and their charges.

A total of 136 Himeyuri teachers and students lost their lives in the Battle of Okinawa. Of those, 117 died after the dispersal order, indicative of the chaos amid the fierce fighting in the southern part of the island. 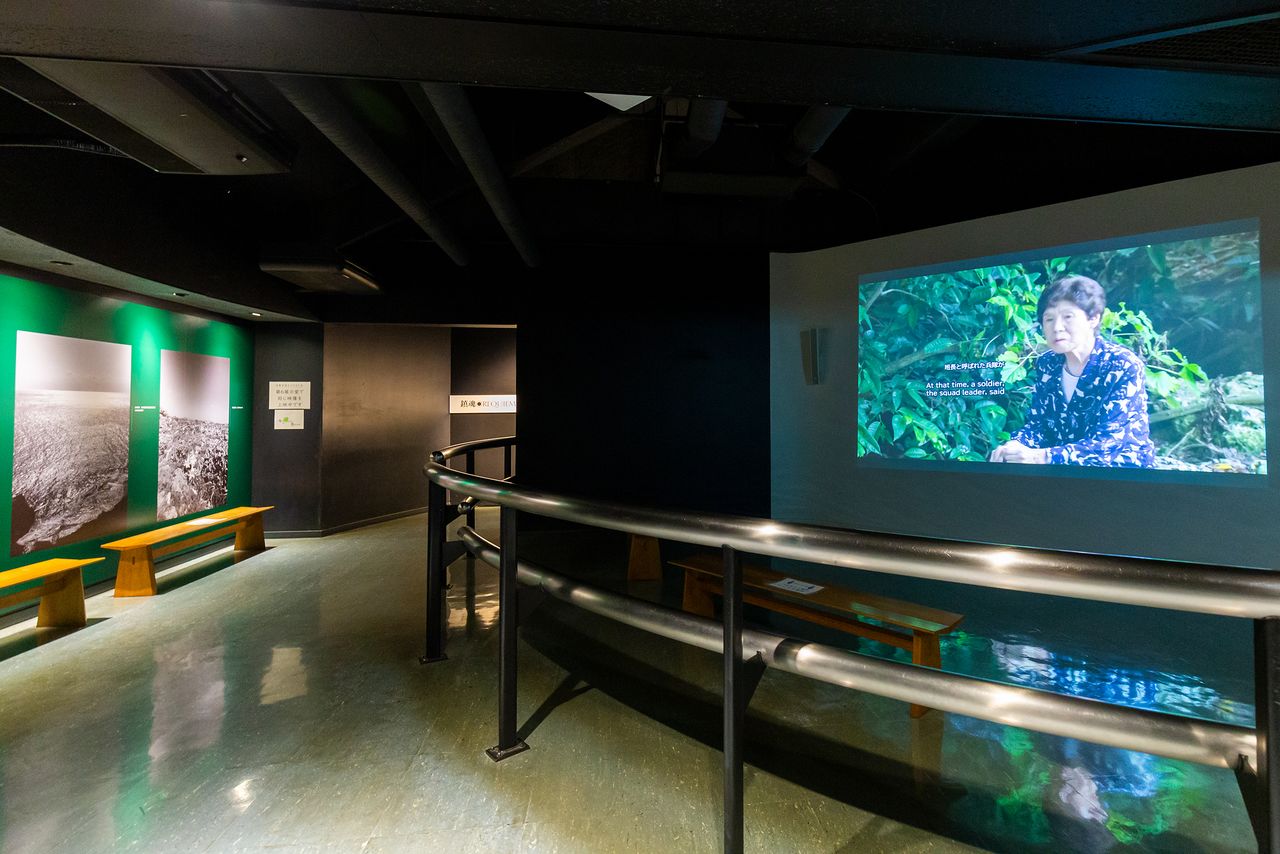 The third exhibit hall presents the testimony of corps members who survived along with footage taken by the US military. 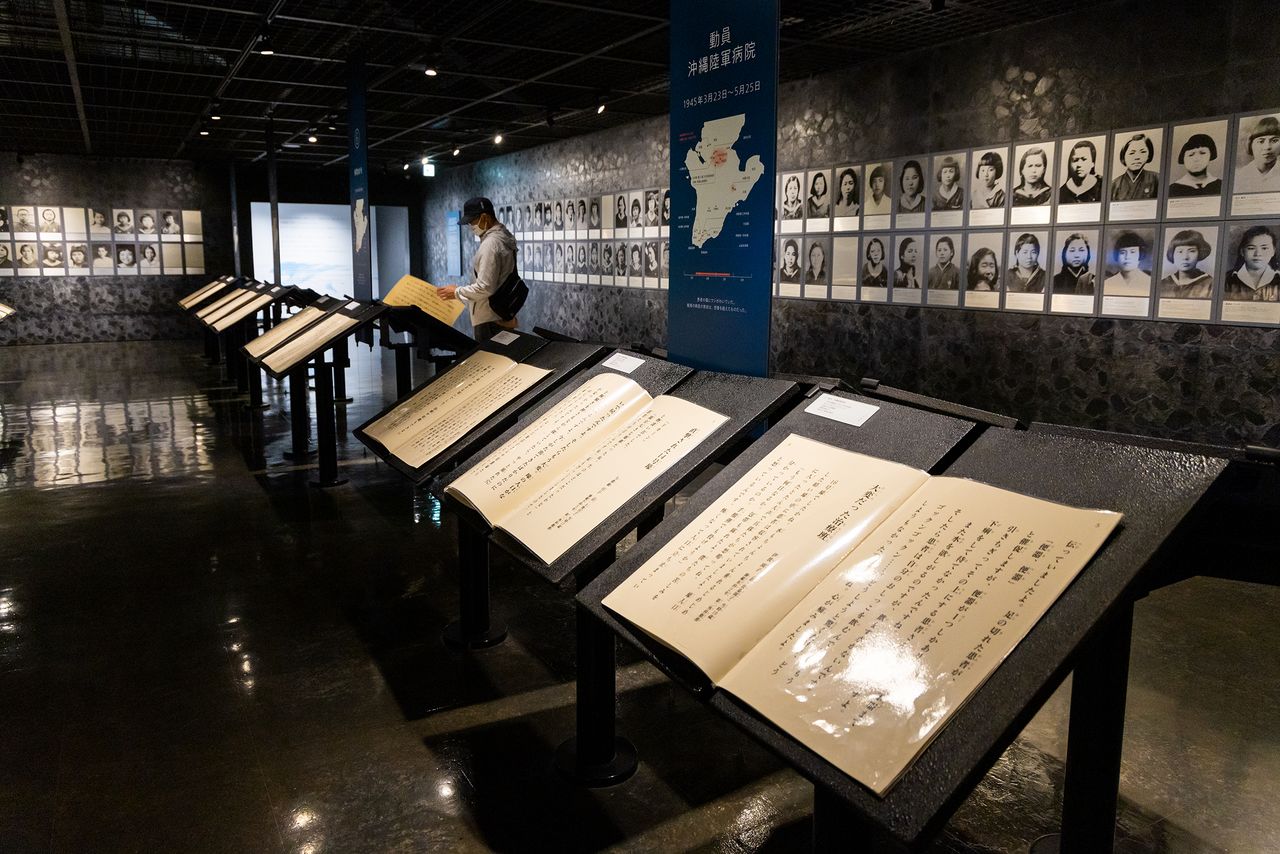 The fourth exhibit hall displays survivors’ testimony. Photographs of the students and teachers line the walls.

After the war, the residents of Mawashi, where the schools had been located, were ordered by the US military to move east of Ihara to Komesu. Kinjō Washin, then the headman of Mawashi and a bereaved relative of a student corps member, began to collect human remains together with area residents in 1946 and erected two memorials, the Konpaku no Tō ossuary in Komesu and the Himeyuri no Tō peace tower.

The story of the tragic fate of the Himeyuri student corps was recounted in US military detention camps and became widely known. Hearing the story, writer and Okinawa native Ishino Keiichirō (1909–1990) penned Himeyuri no Tō (The Tower of the Lilies), which was first made into a film in 1953, and then subsequently remade several times, ensuring the story’s renown throughout Japan.

Graduates of the two schools formed an alumnae association in 1948, although it was not until 40 years later, in 1989, that the Himeyuri Peace Museum opened. Corps survivors tormented by survivor’s guilt had hesitated to talk about their wartime experiences. It was only when they reached their sixties that they became convinced of the need to honor their follow students who had died by speaking to younger generations about the horrors of war and exhort the importance of peace.

The fifth exhibit hall carries a declaration by the alumnae that “Each one of us will continue speaking of what we experienced during the war.” 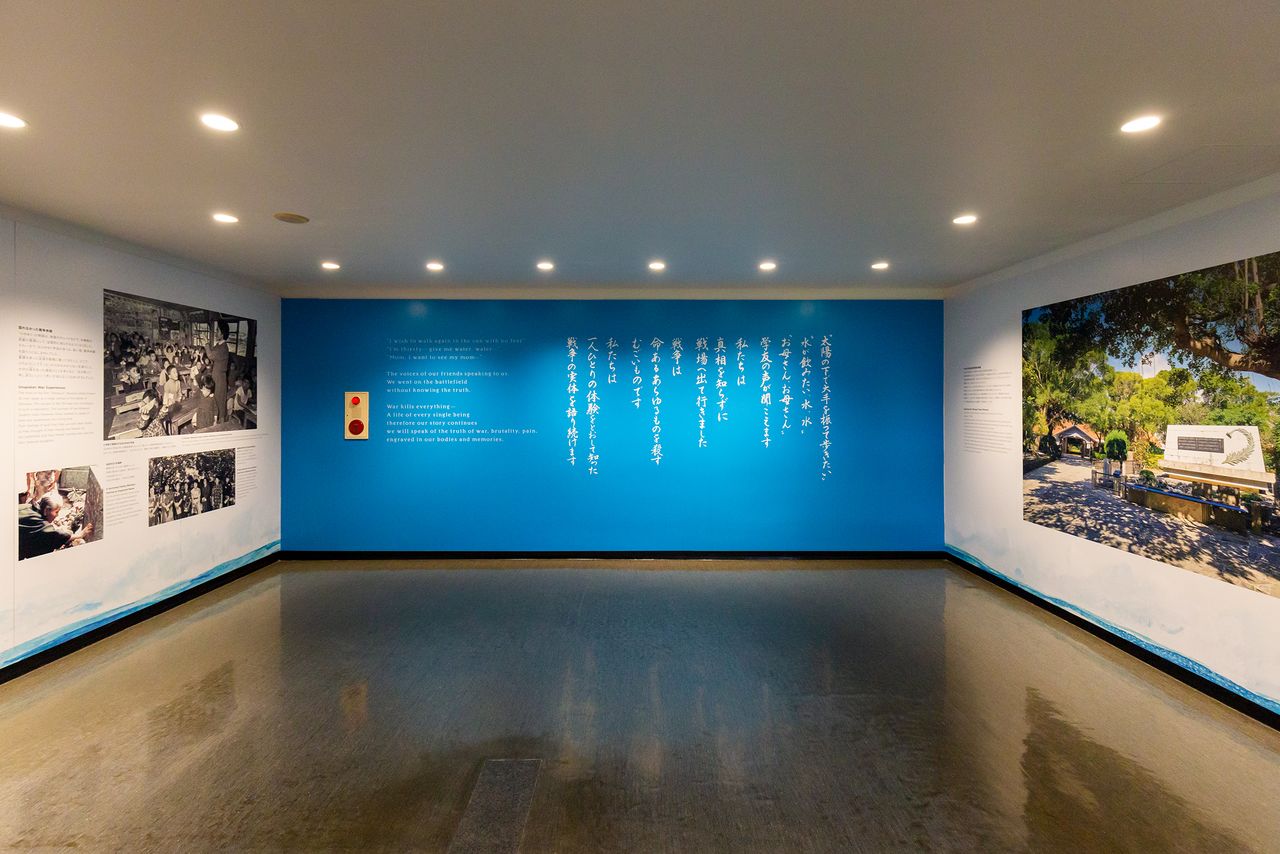 A display of the Himeyuri corps survivors’ activities and their declaration. 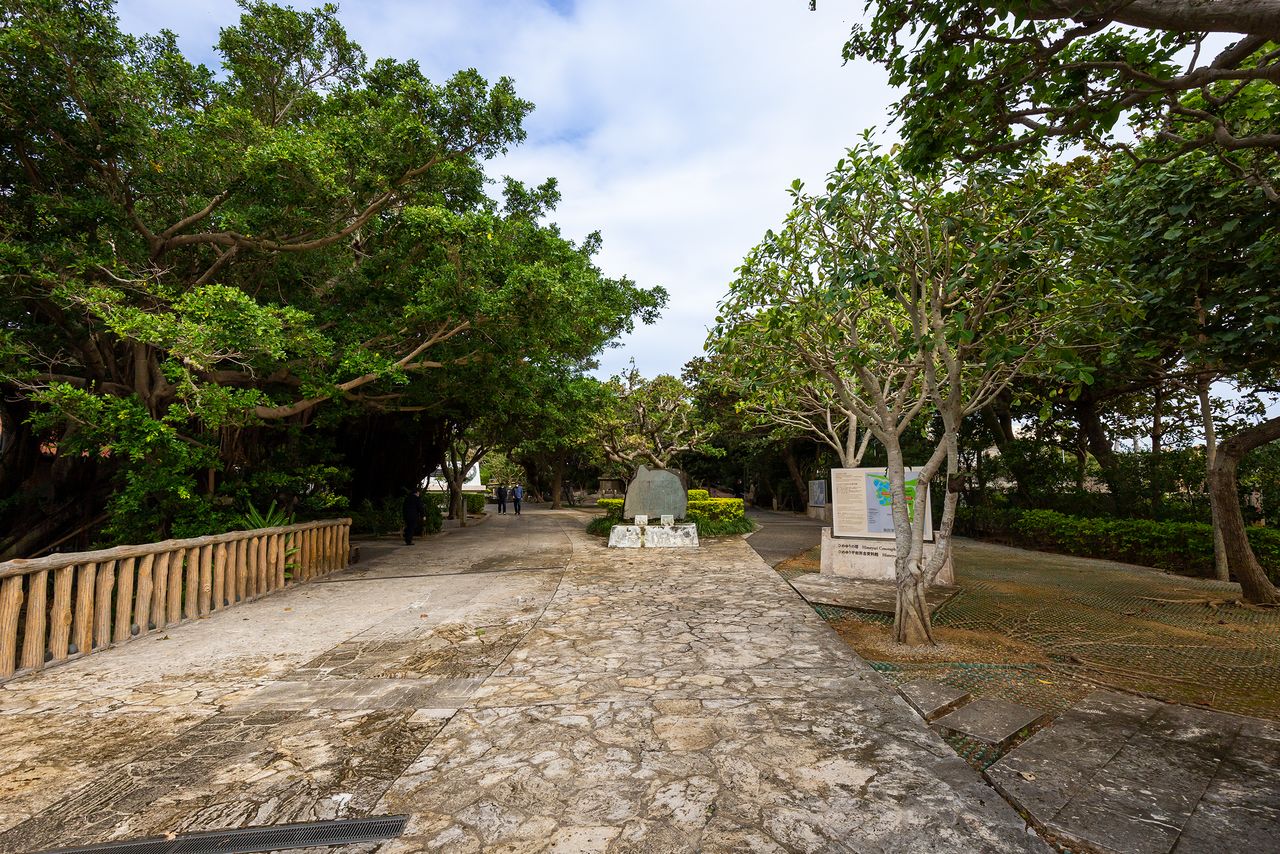 The peaceful surroundings of the Himeyuri Cenotaph invite reflection.