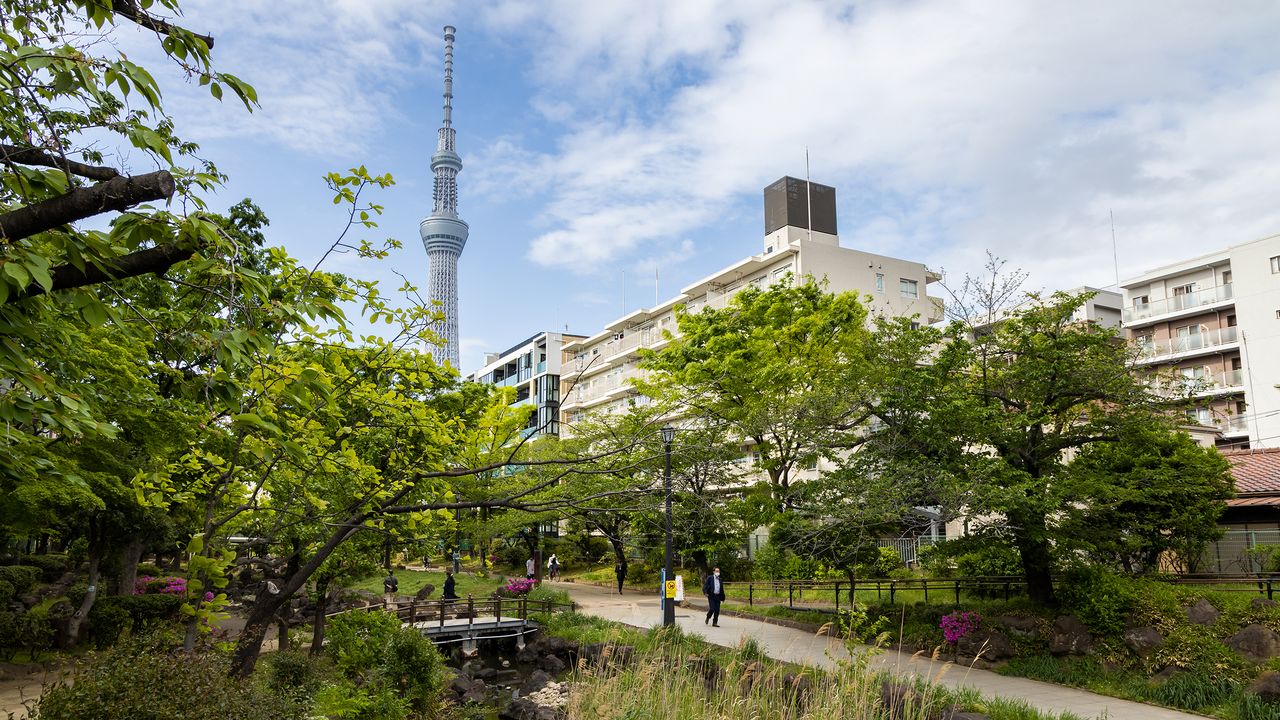 Architecture Travel Jun 3, 2022
The Tokyo Skytree is 10 years old this year. The construction of this landmark, Japan’s tallest structure, has stimulated development as the tower and the surrounding neighborhood continue to evolve.

The Tokyo Skytree in Sumida, Tokyo, is the world’s tallest free-standing tower at 634 meters high. This year marks the tenth anniversary of the structure, which along with its broadcasting duties is a popular sightseeing draw. Although tourist numbers have dipped during the pandemic, the total number of visitors to the tower since it opened hit 40 million in late 2021. The surrounding Skytree Town complex, which also includes the Tokyo Solamachi commercial facility and the Tokyo Skytree East Tower office building, has drawn more than 300 million people since opening its doors. 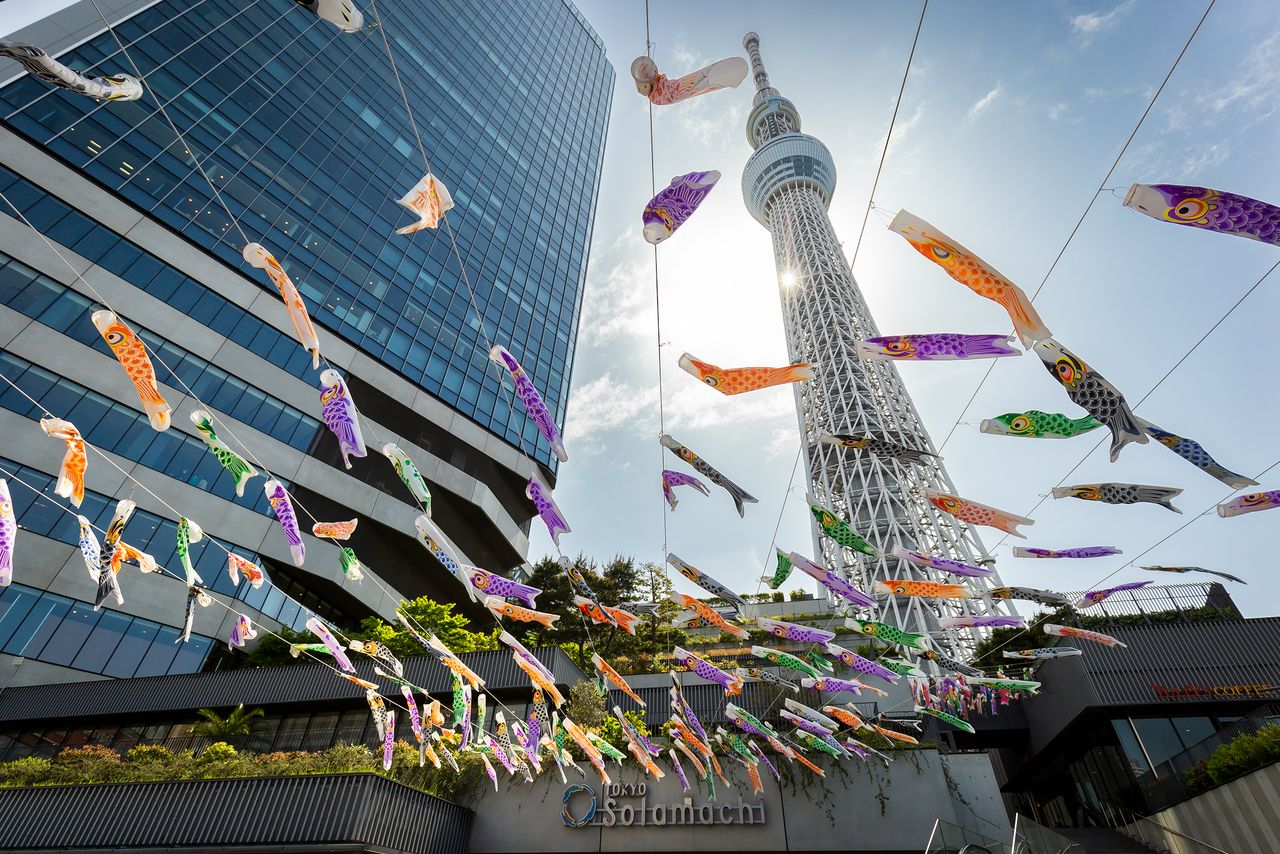 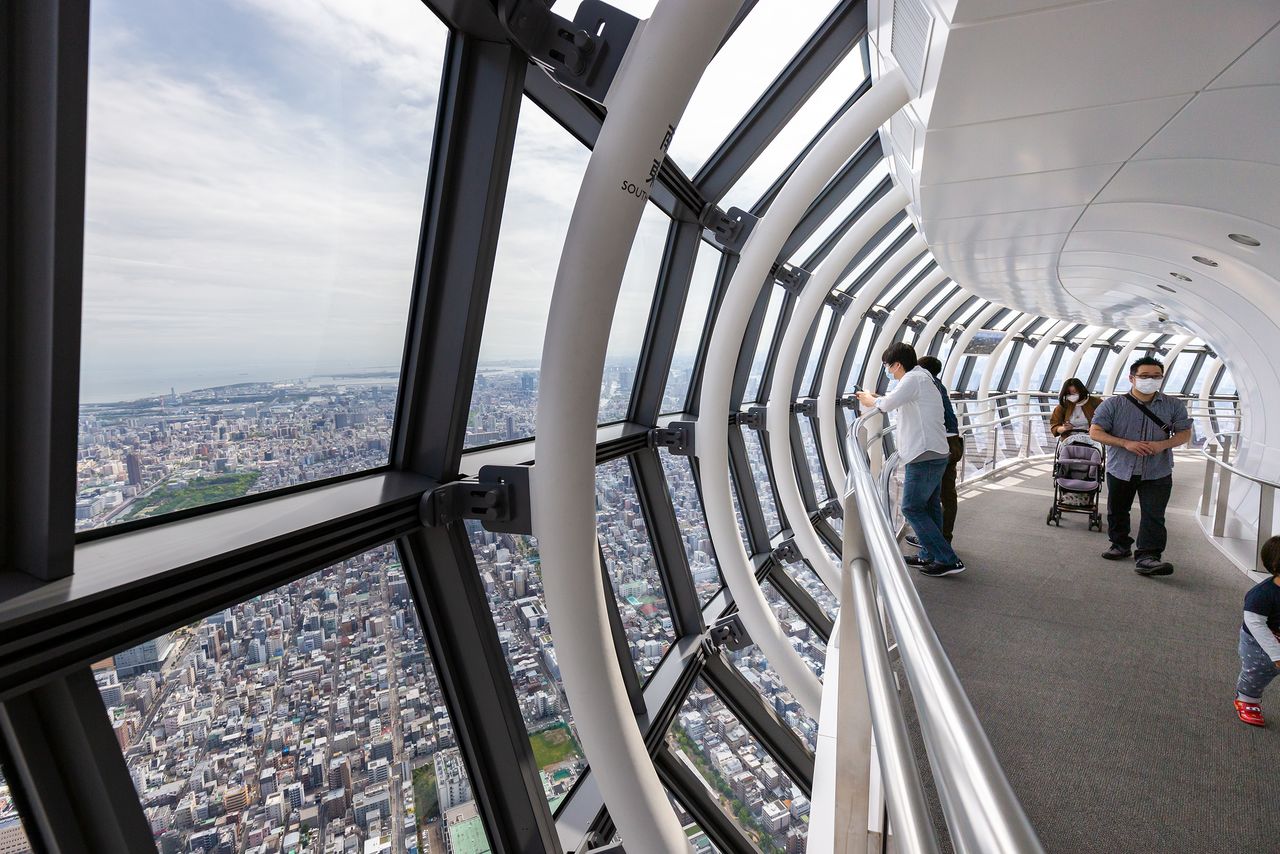 Visitors take in the view from the Tenbō Galleria observation deck 450 meters up, which features an upward-sloping floor meant to give the impression of strolling in the clouds.

Tokyo Skytree has been a preeminent Tokyo landmark for 10 years now, but completion of the tower has not been the end of the story. Speaking at a recent commemorative press seminar, Yamamoto Hideki, executive director at architectural and engineering firm Nikken Sekkei that designed the tower, noted that development of the neighborhood continues even now. 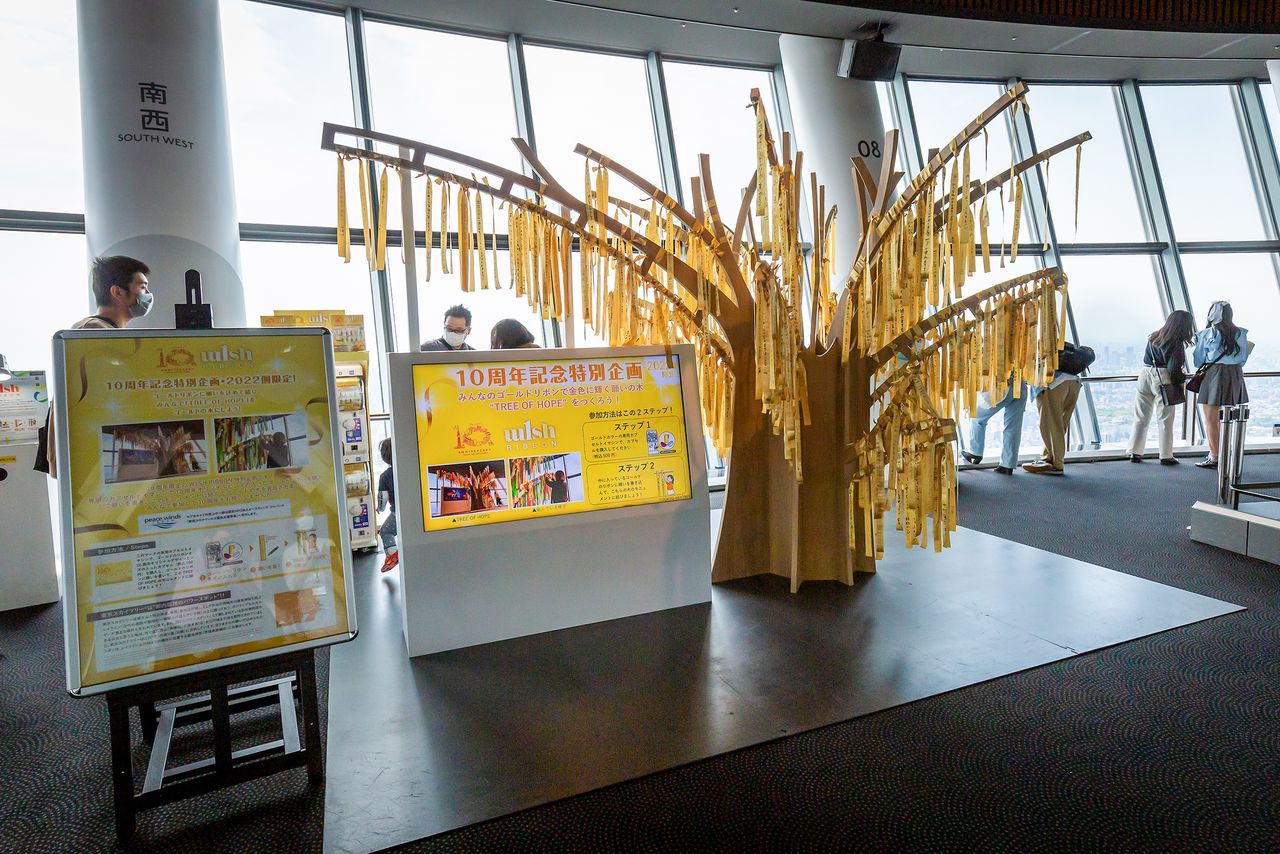 The “Wish Ribbon” at the 350-meter high Tenbō Deck was built as part of tenth-anniversary celebrations. Tokyo Skytree is also popular as a “power spot” and the tree is festooned with gold ribbons on which visitors have written wishes.

With Japan planning to launch terrestrial digital broadcasting in 2006, the search for a suitable site for a television transmission tower began in 2003. Intent on attracting the project, Sumida partnered with private railway operator Tōbu to offer the latter’s disused freight yard and other parcels of land as the site for the tower. This proposal was accepted in March 2006.

In the press seminar, Nikken Sekkei’s Yamamoto recalled how then mayor of Sumida Yamazaki Noboru wanted the structure would be light-colored, to brighten the drab image of the neighborhood, with its cluster of small workshops. 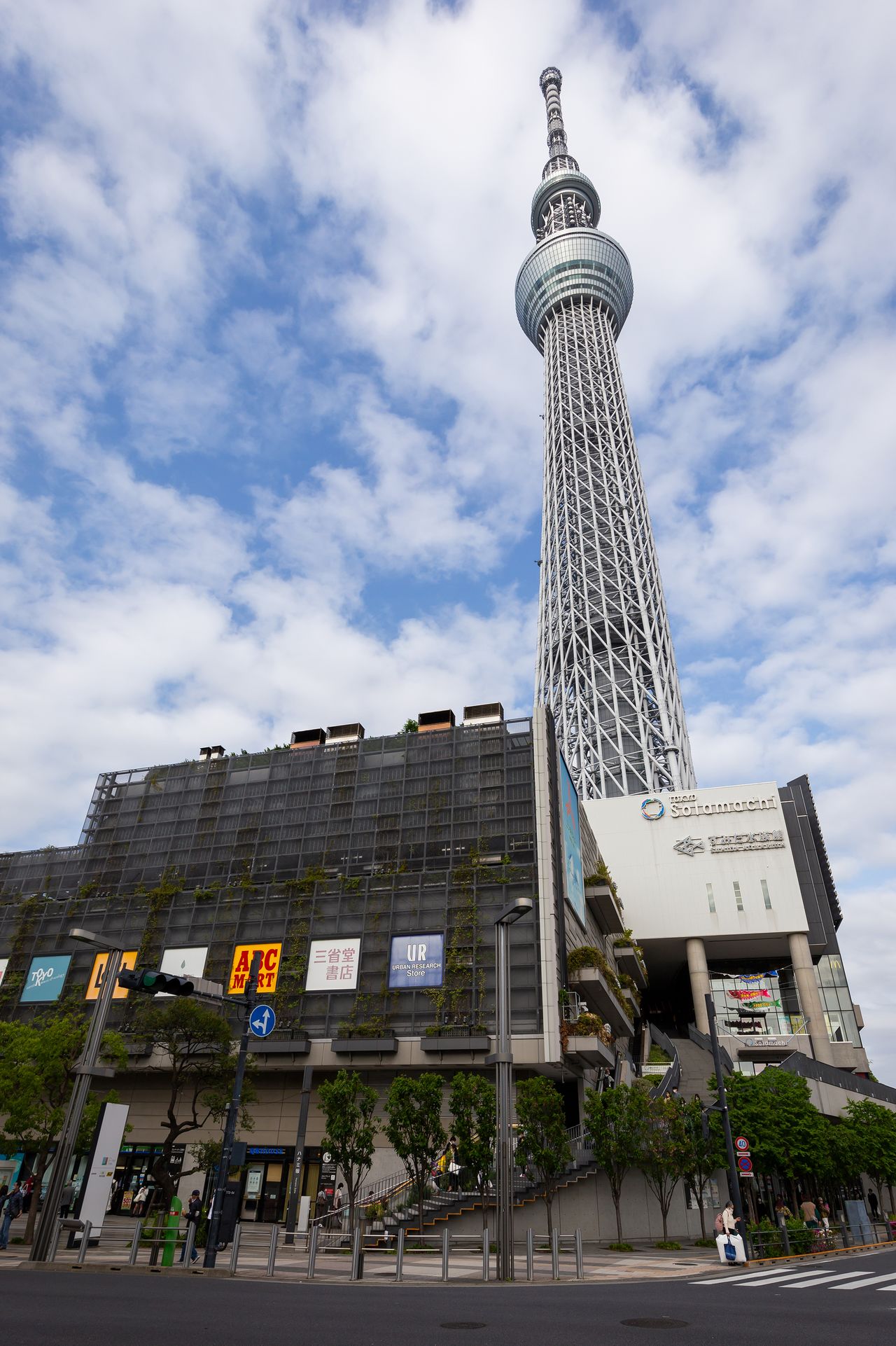 After World War II, Sumida, flattened by wartime aerial bombings, rebuilt itself by attracting small-scale manufacturers. Buoyed by the strong economy of the 1960s, the distinctive shitamachi culture of Tokyo’s low-lying eastern districts thrived. But as the boom faded, factories closed or moved away. Numbering ten thousand in 1970, only about three thousand factories still remained in Sumida by 2008, when construction of the Skytree began. Mayor Yamazaki saw the project as a way to revitalize the area through tourism and bring the neighborhood’s manufacturing businesses back to life. 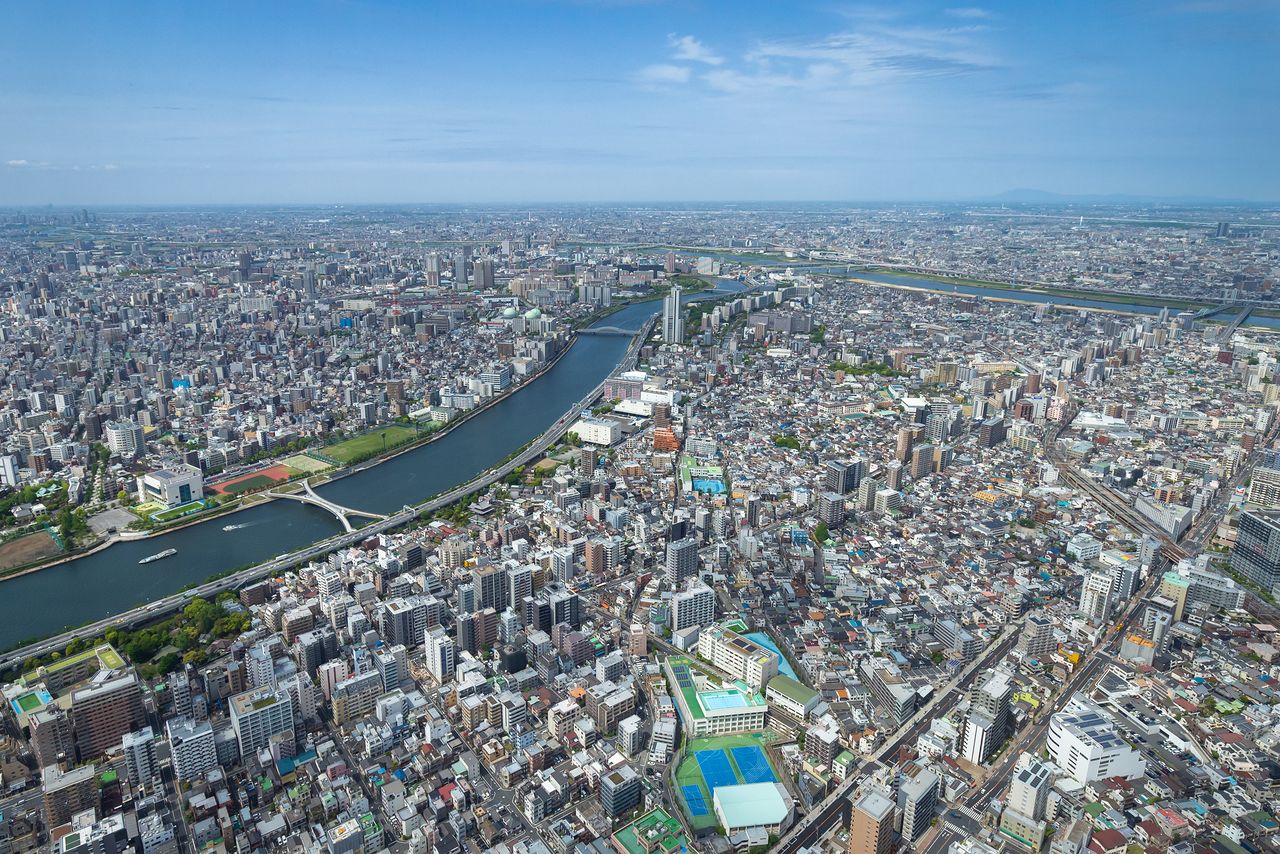 The view up the Sumida River from the Tenbō Deck, with the Arakawa River to the right. Sumida was an ideal site for manufacturing, thanks to the many artificial waterways created there during the Edo period (1603–1868).

Aware that other towers in Japan and abroad had attracted interest from visitors early on, only to flag later, Skytree’s operator was concerned that the tower’s draw as a tourism site might similarly wane in time. They felt that to attract a constant stream of visitors , the area around the tower needed to be included as part of the tower’s appeal. This vision meshed well with the local authority’s plan to remake the whole of Sumida into a tourist destination, and the project took off.

Sumida considers the project, which aims to create a circular route linking nearby popular sightseeing areas like Asakusa and Kameido, the starting point for creating a new shitamachi culture. 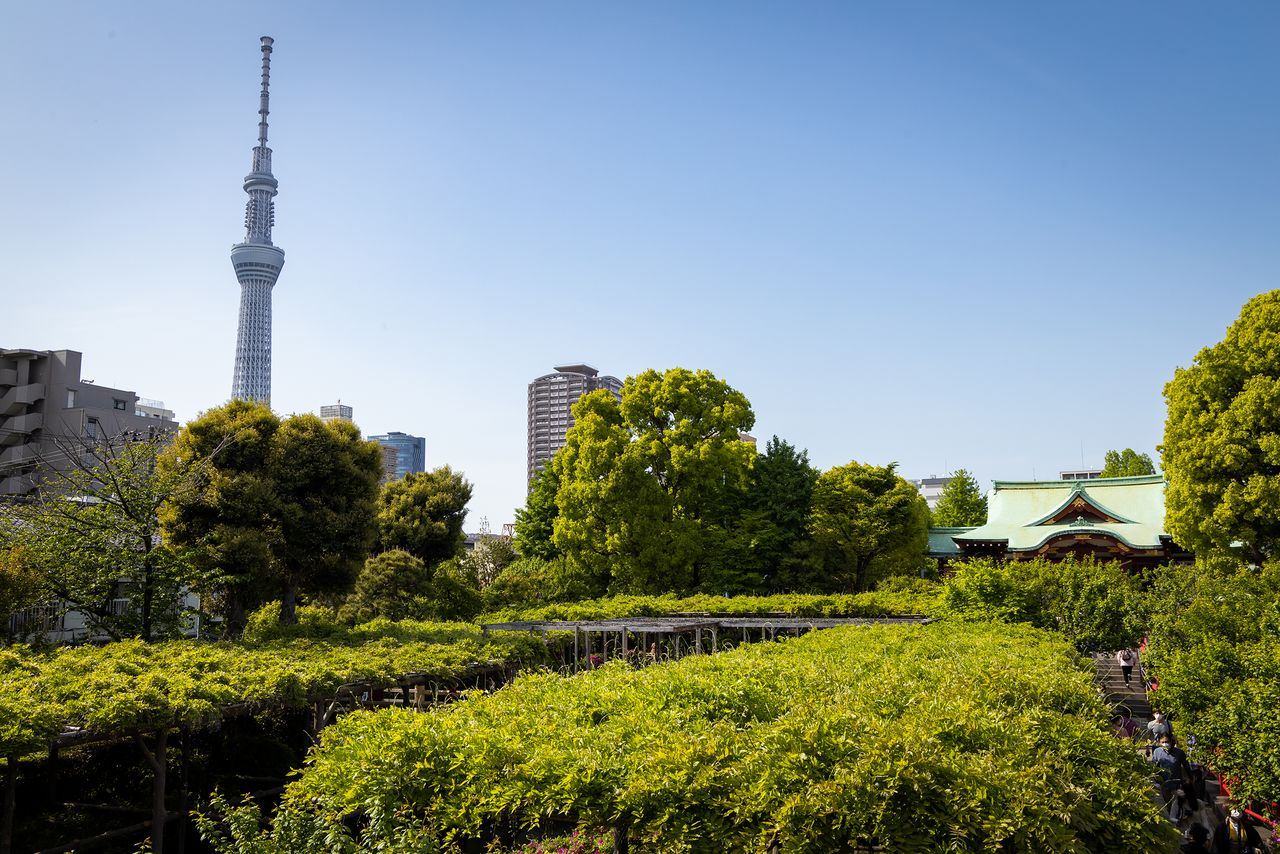 After Tokyo Skytree opened, efforts to beautify the area included cleaning up the nearby Kitajukken River and other waterways, and building a pedestrian walkway along the river and a dock for sightseeing boats. 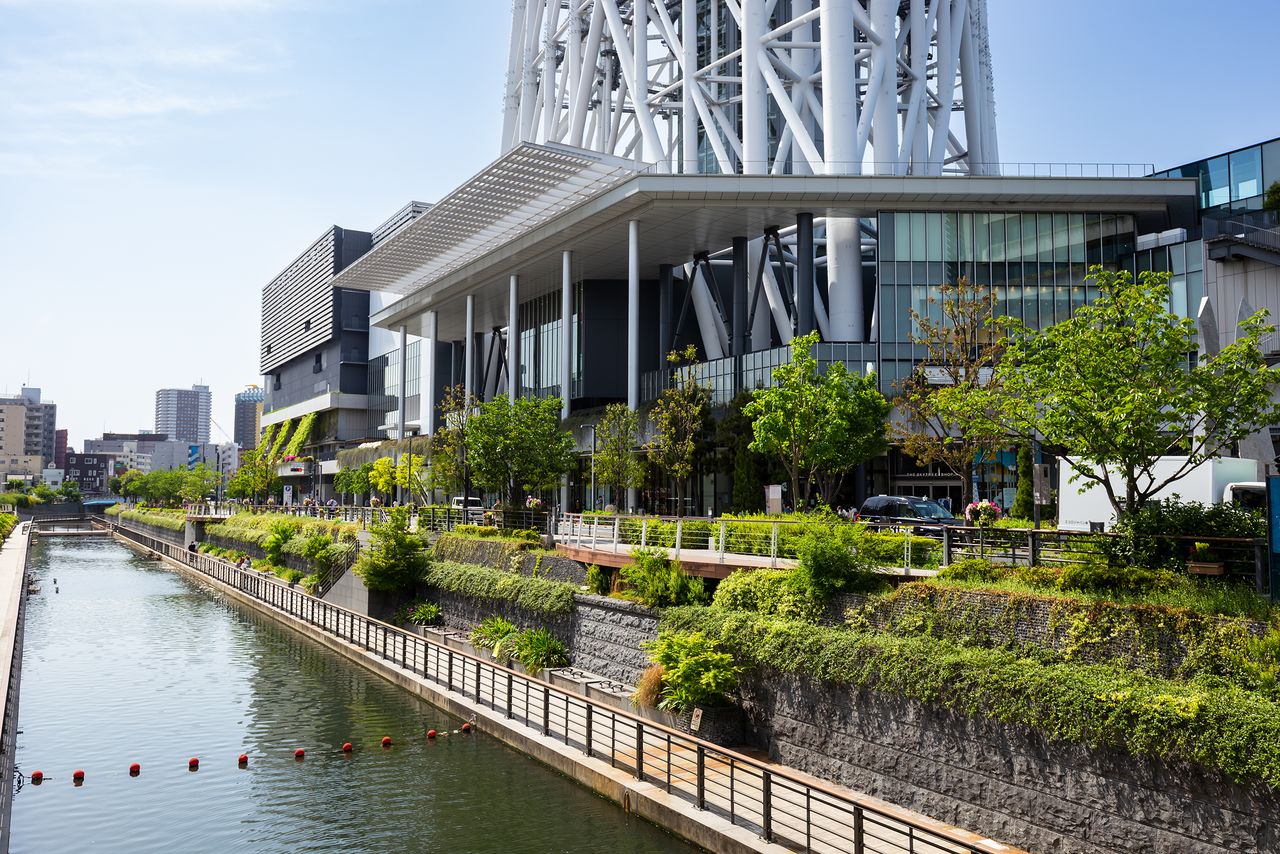 The Kitajukken River in front of the Skytree has become an attractive riverside spot.

Efforts to spruce up the area and attract more visitors continue. Overhead power lines have been buried and the Sumida Hokusai Museum, displaying works by ukiyo-e artist and Sumida native Katsushika Hokusai (1760–1849), opened in 2016. Tokyo Mizumachi, a commercial facility housed under the elevated tracks of the Tōbu Isezaki Line, and the Sumida River Walk, a pedestrian bridge across the Sumida River built alongside the tracks, opened in 2020. All of these attractions are part of the plan to improve the tourism route linking Skytree with Asakusa across the river.

Other related projects include elevating the railway tracks and eliminating level crossings near Tokyo Skytree Station to improve road traffic flow and prevent accidents. There are also future plans for linking with the Mukōjima district, home to the largest number of geisha in Tokyo. 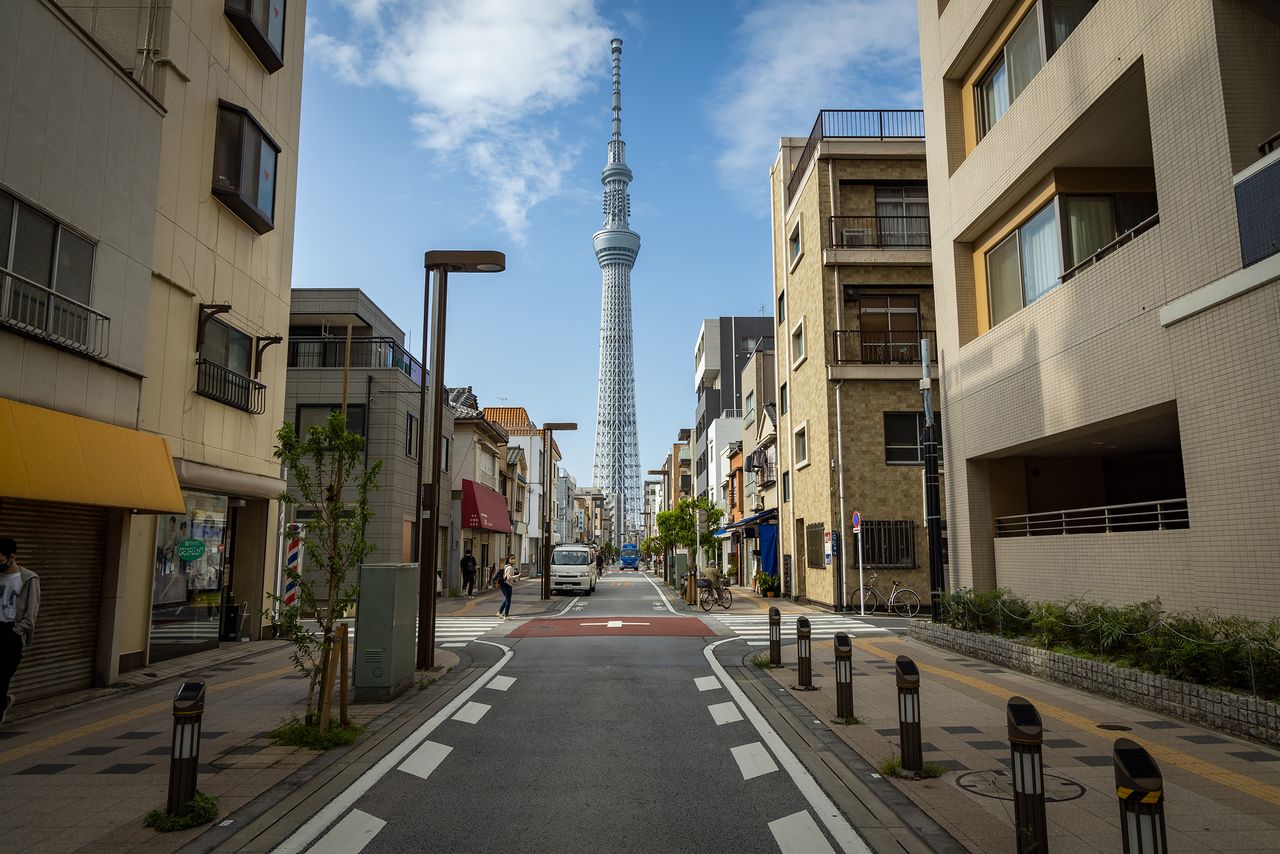 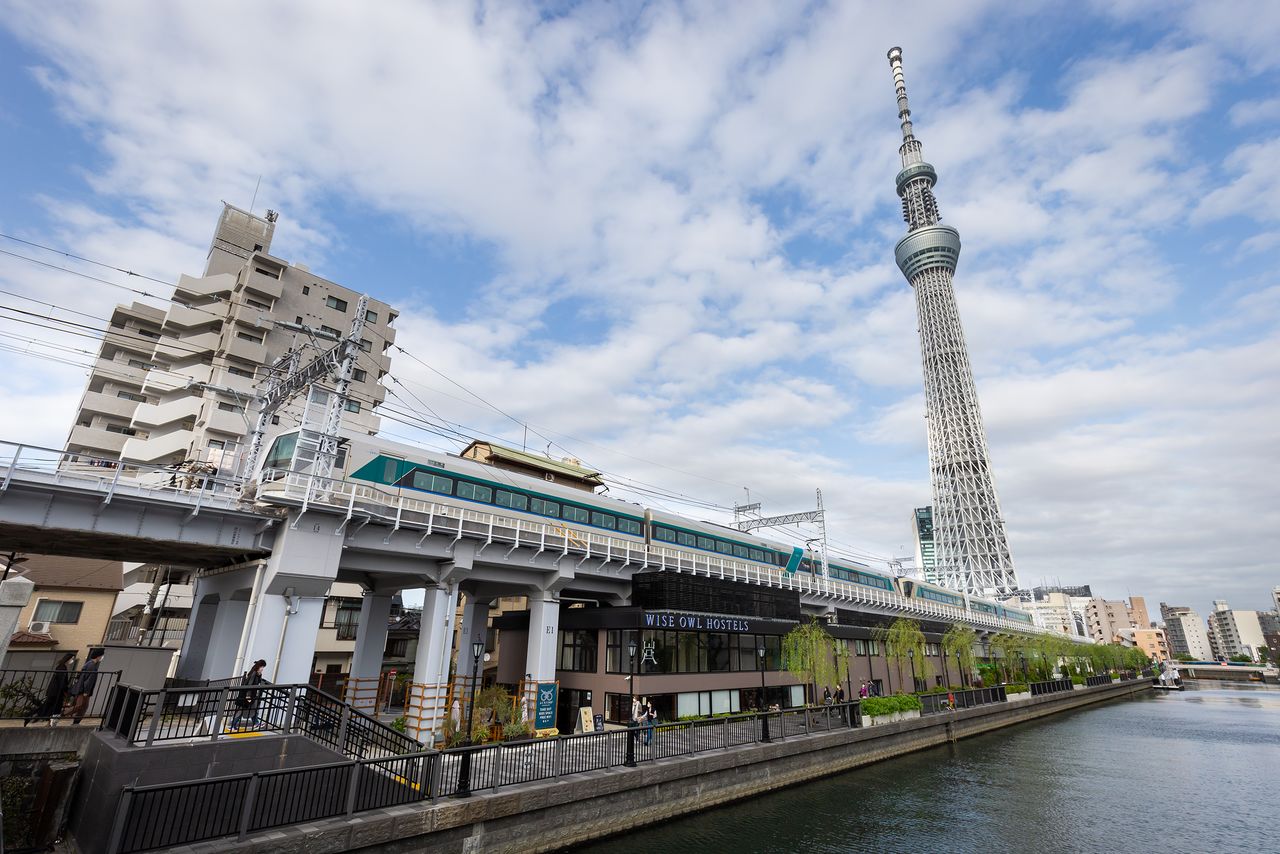 Tokyo Mizumachi, under the railway tracks along the Kitajukken River, hosts a community-run hostel and a variety of shops.

Asked about the effects of Tokyo Skytree coming to the neighborhood, municipal officials note that the number of visitors heading to Sumida from Asakusa has clearly increased, thanks to which new shops have been springing up along the connecting route and in adjacent areas.

Long-time Sumida residents are pleased that their area has become better known, not just in Tokyo but around the country, as Tokyo Skytree appears almost daily in the background of weather reports.

Broader name recognition for Sumida has also attracted construction of condominium apartments and boosted land values and rents. While the population of central Tokyo’s 23 municipalities continue to drop, for Sumida the opposite has been the case, even during the pandemic. What is more, people in higher income brackets are also choosing to live there. This in turn brings in more tax revenues for the city, thanks to which it can afford to continue making improvements in the community. 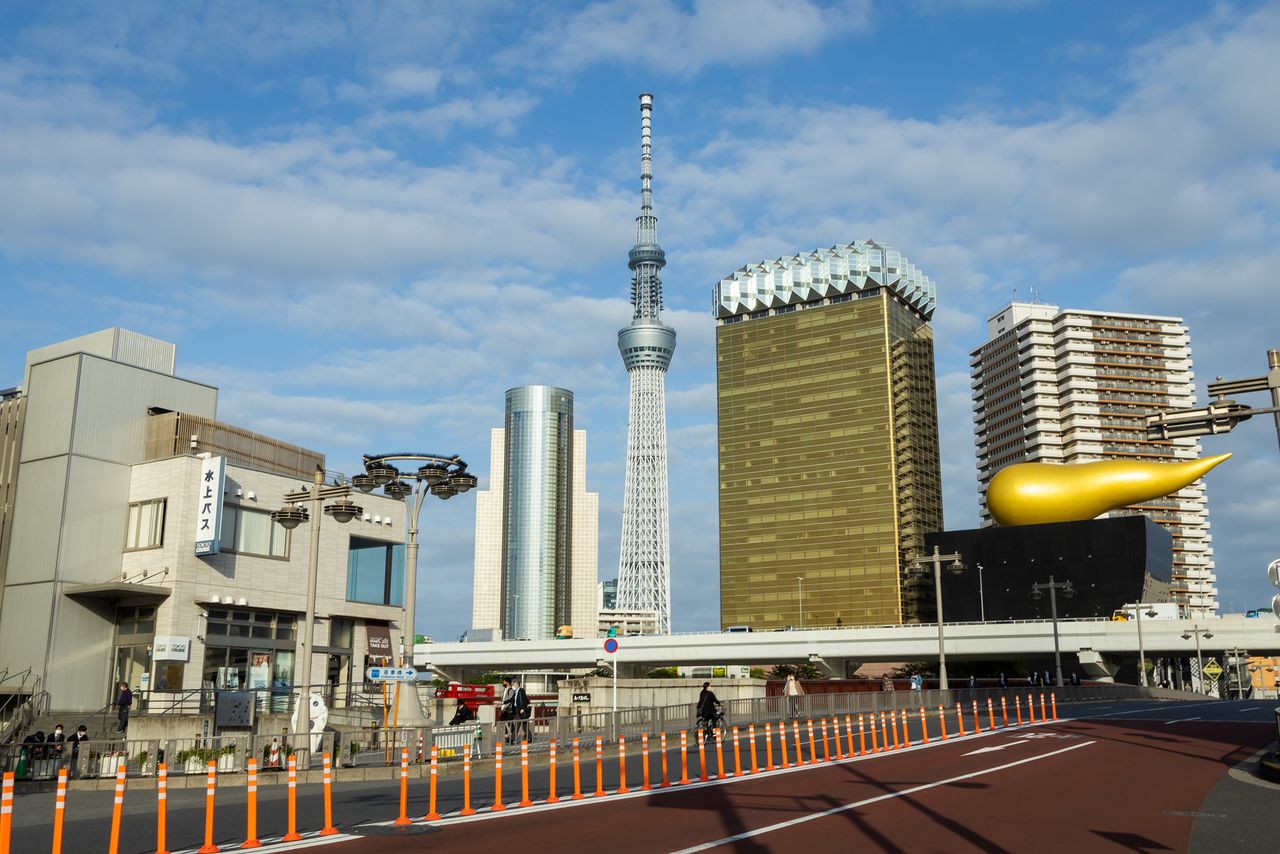 Skytree, viewed from Azuma Bridge near Asakusa Station. To the right is the Asahi Breweries headquarters building, reminiscent of a beer mug, with its gold flame-like object, an iconic sight from Asakusa. 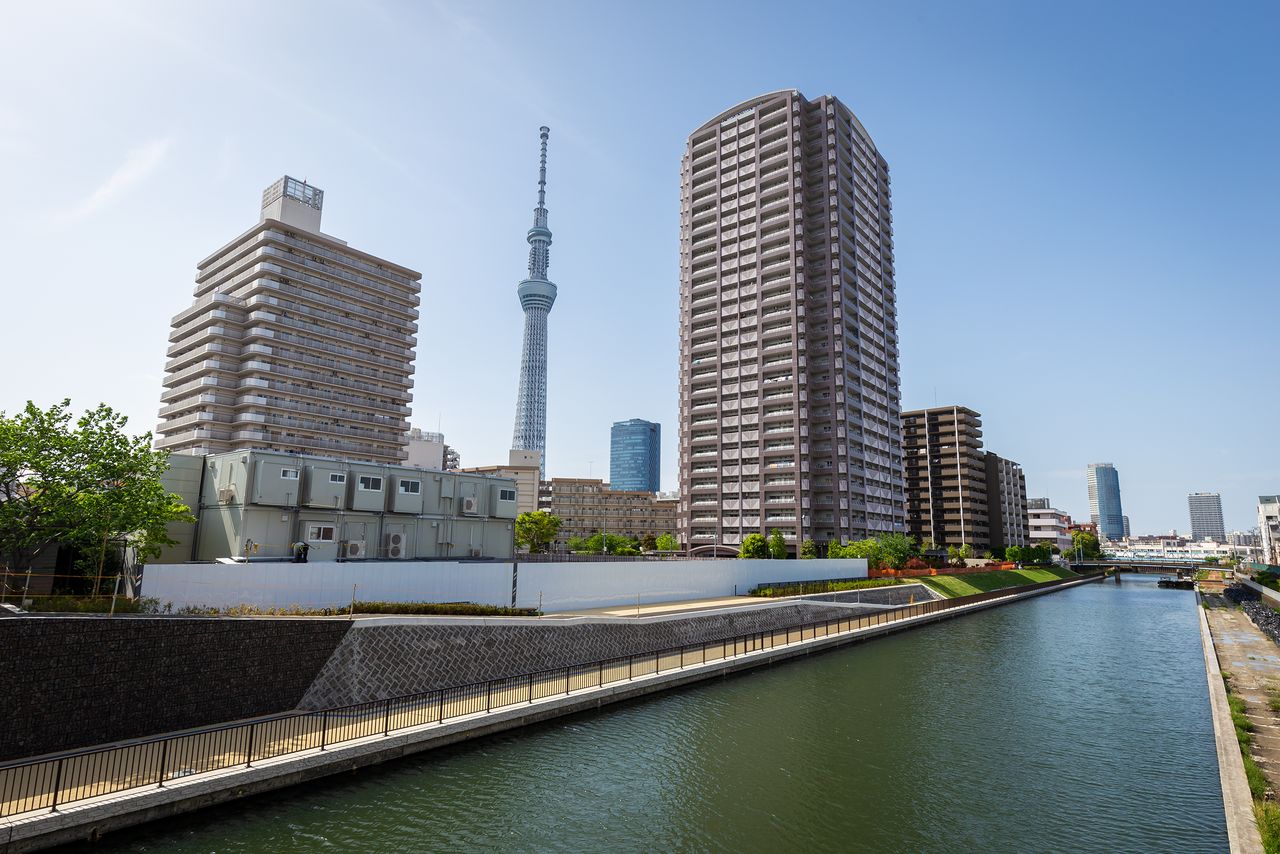 The view from Kurihara Bridge on the Yokokawa River, with new apartment buildings nearby. 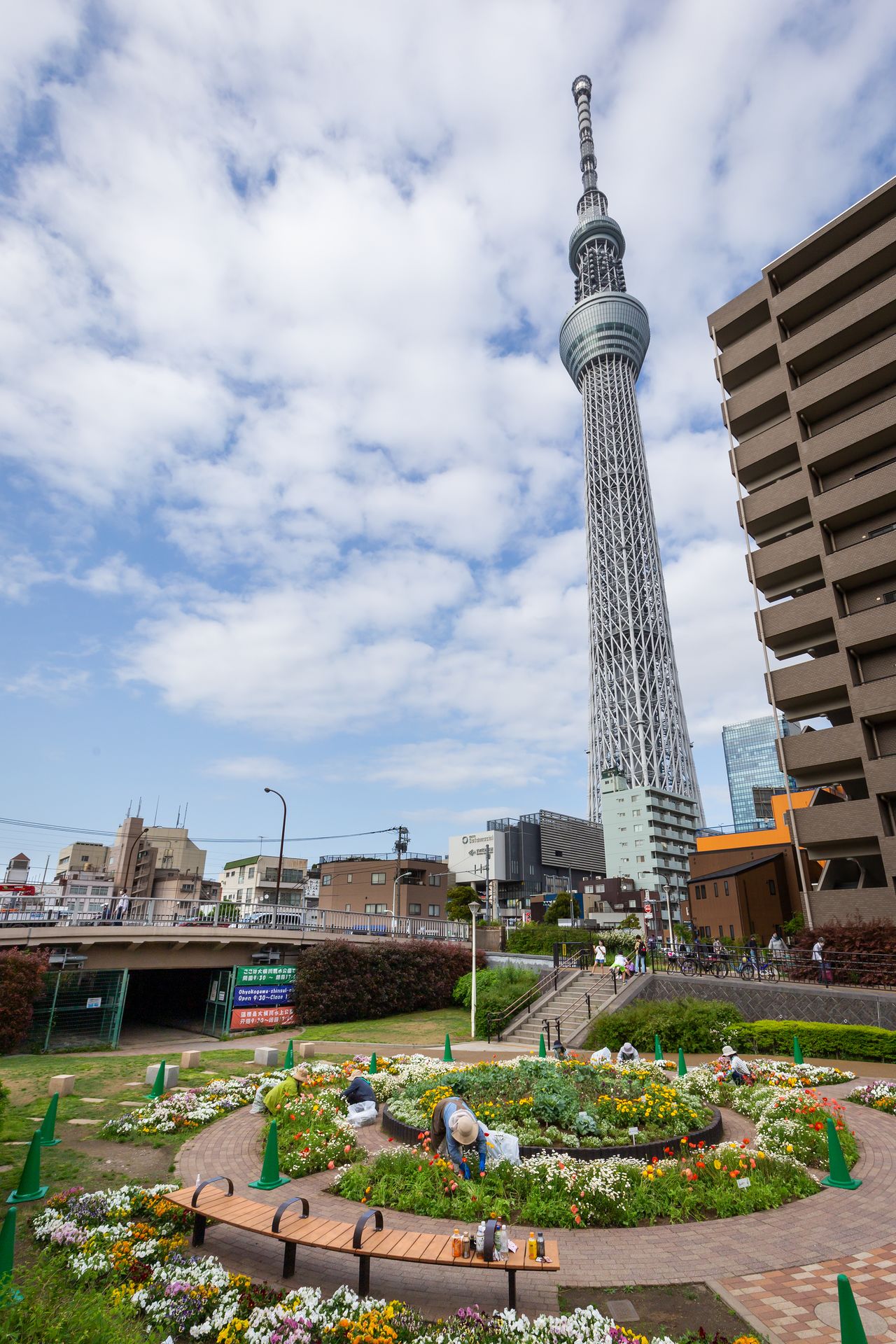 (Originally published in Japanese. Reporting, text, and photos by Nippon.com. Banner photo: The Ōyokogawa Shinsui Park, photographed from near Hō-onji Bridge on Kuramaebashi-dōri.)