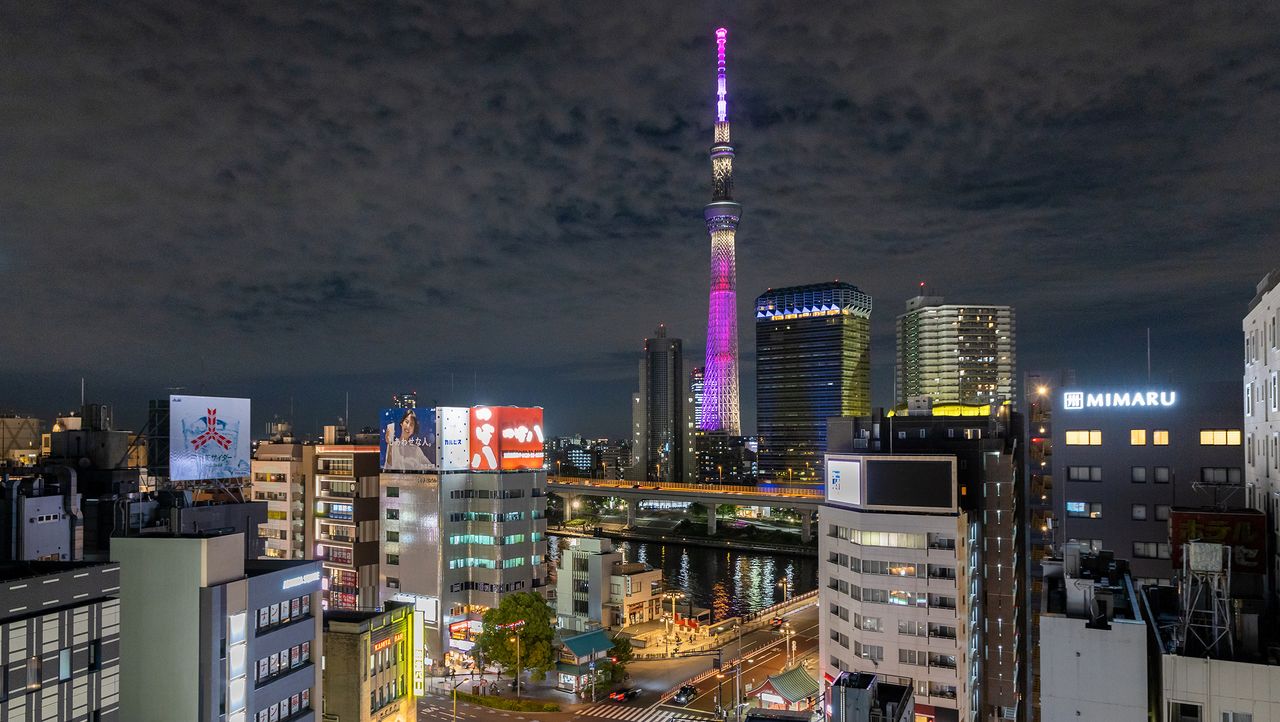 Architecture Travel Jun 10, 2022
Tokyo Skytree has been one of the Japanese capital’s preeminent landmarks since it opened in 2012. The tower’s repertoire of nighttime illuminations along with Sumida’s spruced-up neighborhoods make the area an ever more attractive tourist destination.

Tokyo Skytree’s slim, futuristic design, a sharp contrast to Tokyo Tower’s triangular, broad-based profile, initially took residents some getting used to. But today, its silhouette has become a familiar presence on Tokyo’s skyline. 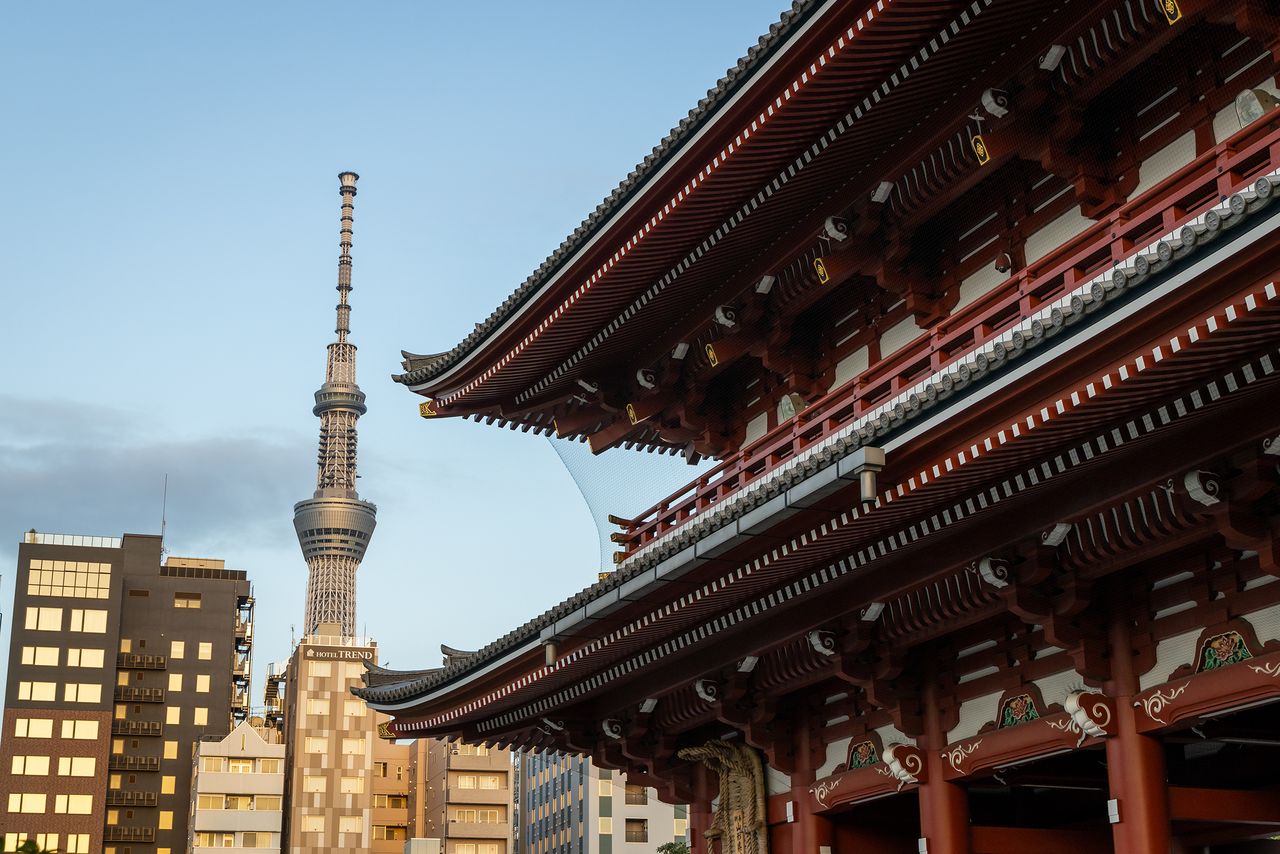 The old and the new: Tokyo Skytree seen from Sensōji temple’s Hōzōmon gate.

The tower stands on a long, narrow site running east to west, necessitating that it has a compact footprint. Rather than using a circular shape, which would have limited the structure’s diameter to 60 meters at ground level, designers opted for a triangular base 70 meters on a side to provide extra stability.

However, the Skytree ideally needed to be circular to ensure even distribution of television signals and to offer visitors 360º views of the city from observations decks. To achieve this, designers hit upon the solution of starting with a triangular cross-section at ground level and gradually morphing it into a circular tower higher up. The tower’s shape takes inspiration from the graceful arc of the Japanese sword and the softly swelling round pillars at the country’s ancient temples. 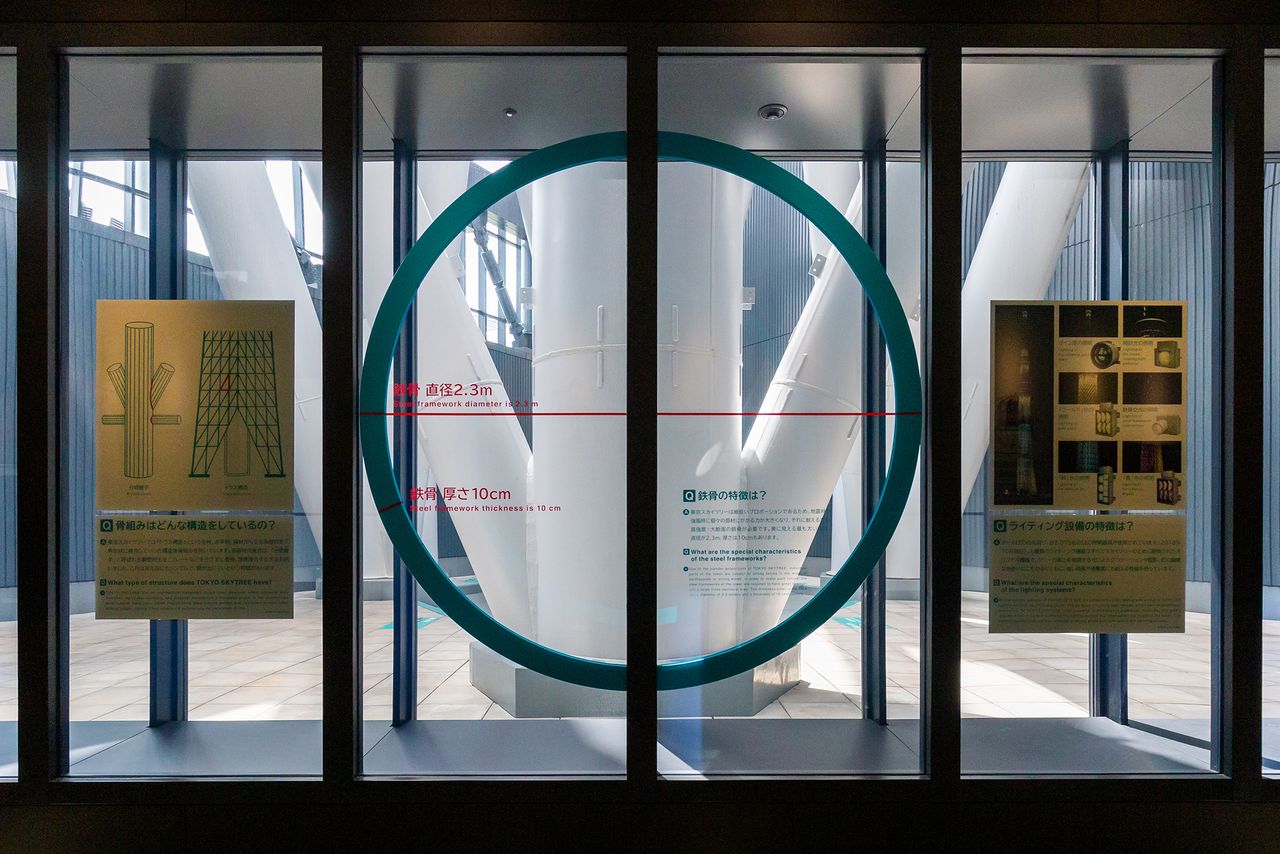 This first-floor window offers a close-up view of the west tripod forming one of the three corners of the structure’s triangular base. The thickest steel girder in the assembly is 2.3 meters in diameter. 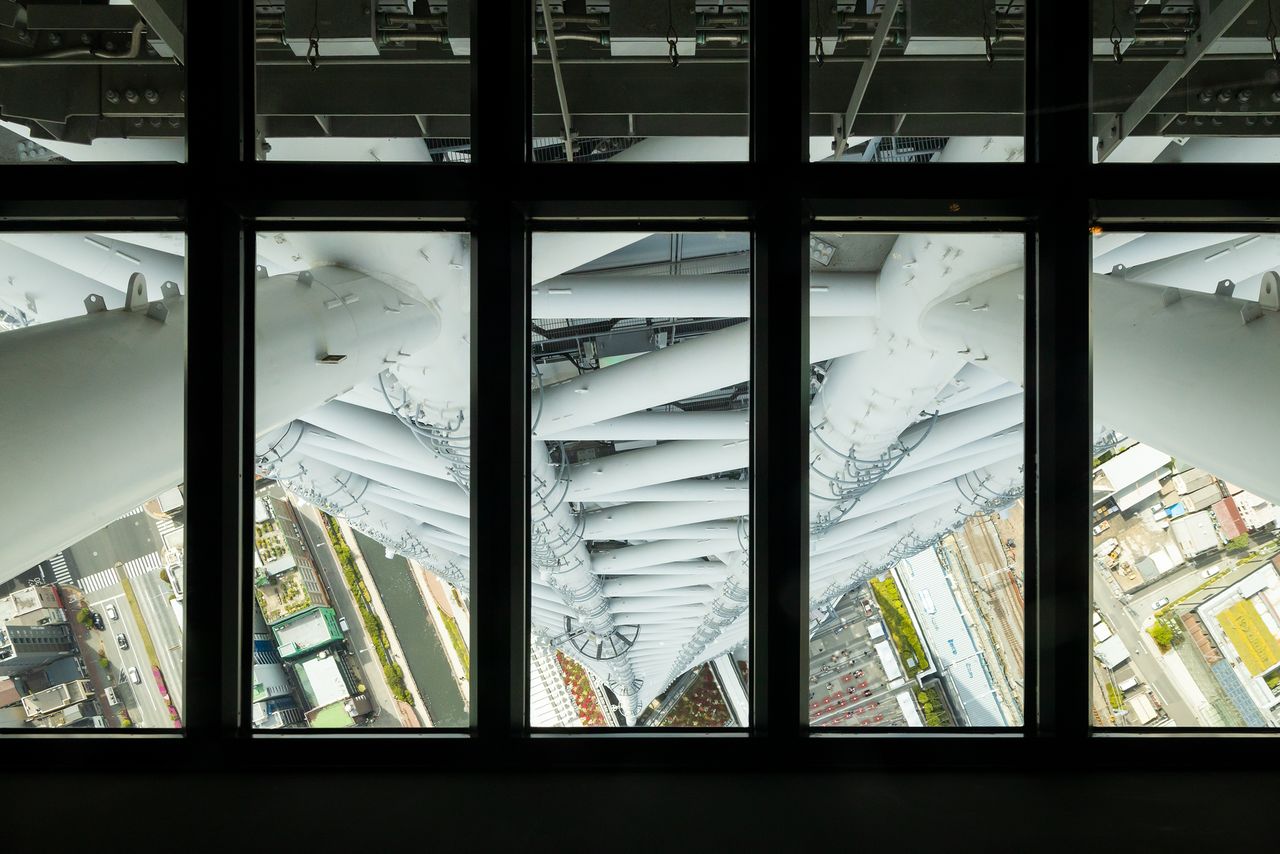 The triangular girder arrangement, twisting as it rises, is visible through the glass floor of the Tenbō Deck observatory 340 meters up.

Intriguingly, the tower’s intricate shape shows different aspects, depending on the angle of view. From certain spots, it can look symmetrical, present a “relaxed” posture, or even appear slightly inclined.

At first glance, the tower seems quite simple, which has helped it quickly blend into the cityscape, but closer inspection reveals a fascinatingly complex design. Overcoming the disadvantage of its cramped site, the Skytree is an architectural masterpiece designed on the concept of “the creation of a landscape transcending time.” 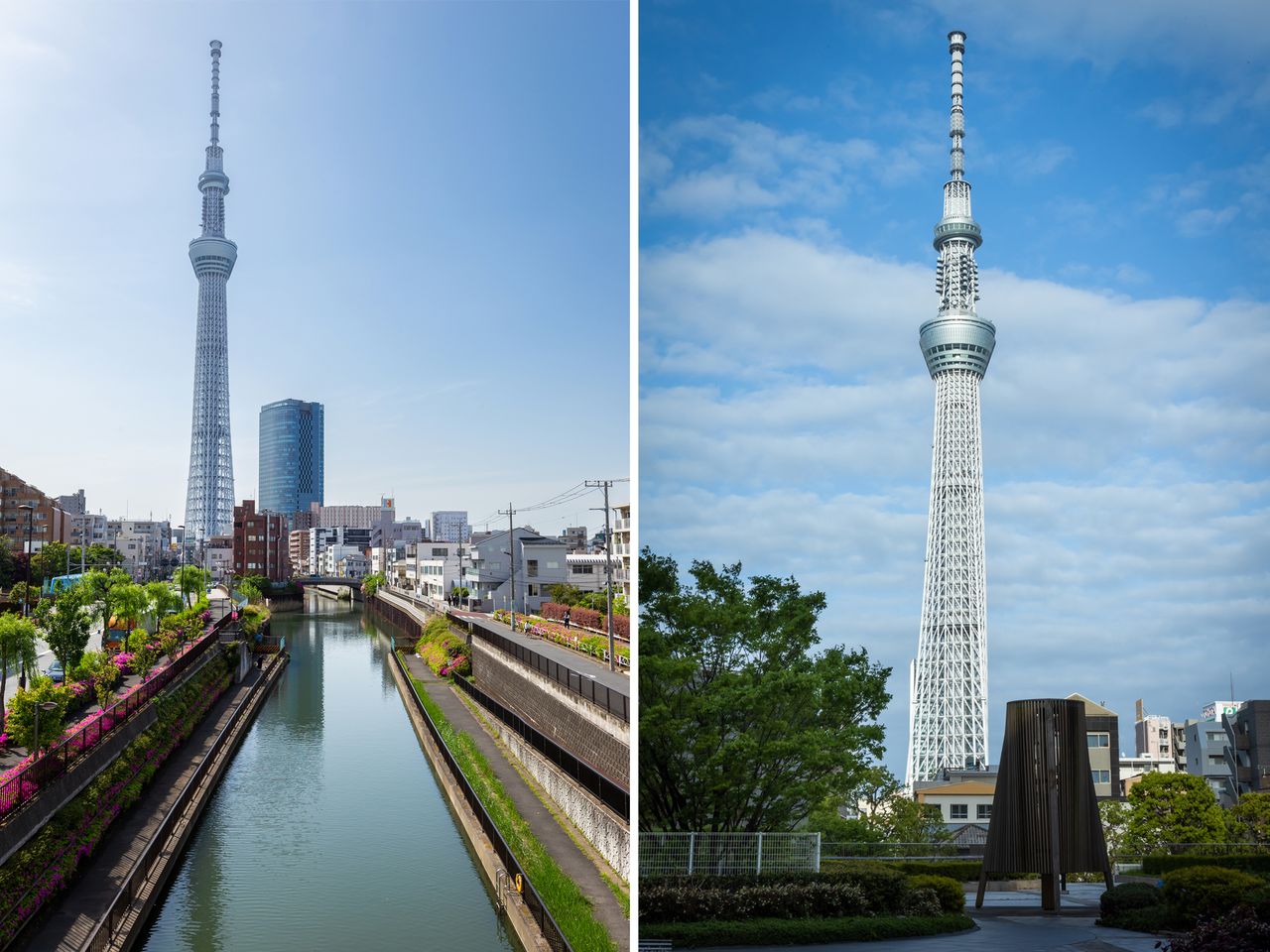 At left, the Skytree appears symmetrical when viewed from the Yanagishima pedestrian bridge over the Kitajukken River, but looks broader at the base and seems to lean to the right when seen from the Sumida municipal office.

Tokyo Skytree is the first structure ever to use the shinbashira, or “core pillar,” technology for earthquake resistance, which affords protection to the delicate-looking tower.

Inside the tower’s truss structure stands a steel-reinforced cylinder housing stairs and elevators. The bottom third of this cylinder is fixed solidly to the surrounding structure with steel plates. The upper two-thirds, however, it is not directly fixed to the tower, but connected to it by oil dampers. When an earthquake brings horizontal shaking, the shinbashira sways at a different frequency from that of the tower, counteracting the shaking and bringing the structure back to a stable state.

The shinbashira was put to the test when the Great East Japan Earthquake struck on March 11, 2011, while the tower was still under construction. The shake-reduction technology worked as planned and the structure was unscathed. Just a week later, workers affixed the lightning rod to the top of the tower, bringing it to its full height of 634 meters. Konishi Atsuo, the structural engineer for the project at the firm Nikken Sekkei, asserts that the technology has proved its worth, enabling the tower to withstand long-period ground motion as well as short, sharp seismic waves that are likely to occur in an earthquake striking directly beneath Tokyo. 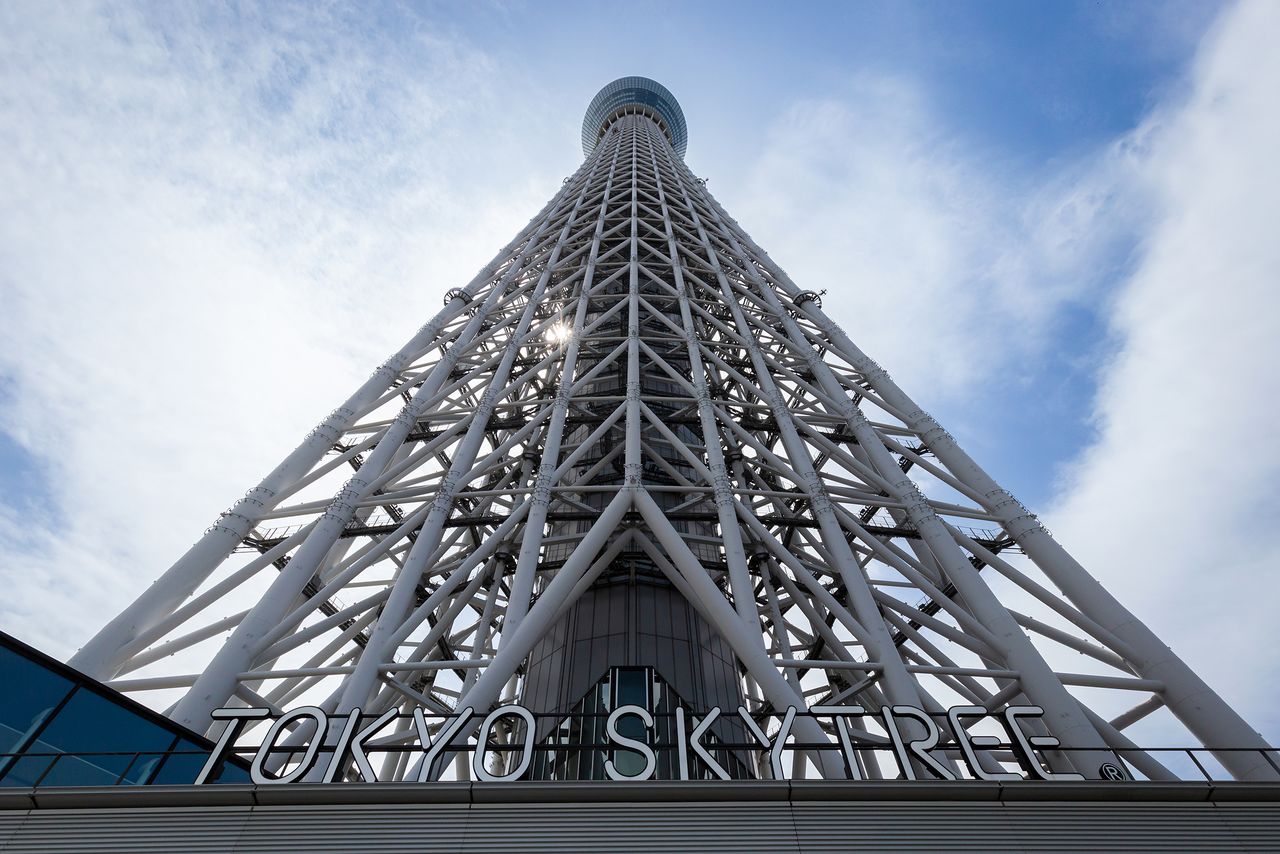 Evening LED illumination is one of the hallmarks of Tokyo Skytree. When the tower was built, it was virtually unheard of to use LED lighting on such a large structure.

Conventional high-brightness lamps produce color by using filters to block unwanted wavelengths, but this significantly affects brightness, and the colors degrade over time. LEDs, on the other hand, produce colors by combining various compounds, making the light more intense while reducing energy consumption by 40%.

The construction of the Skytree spurred further development of LED lighting, which was then in its infancy, and many more large structures now use the technology. 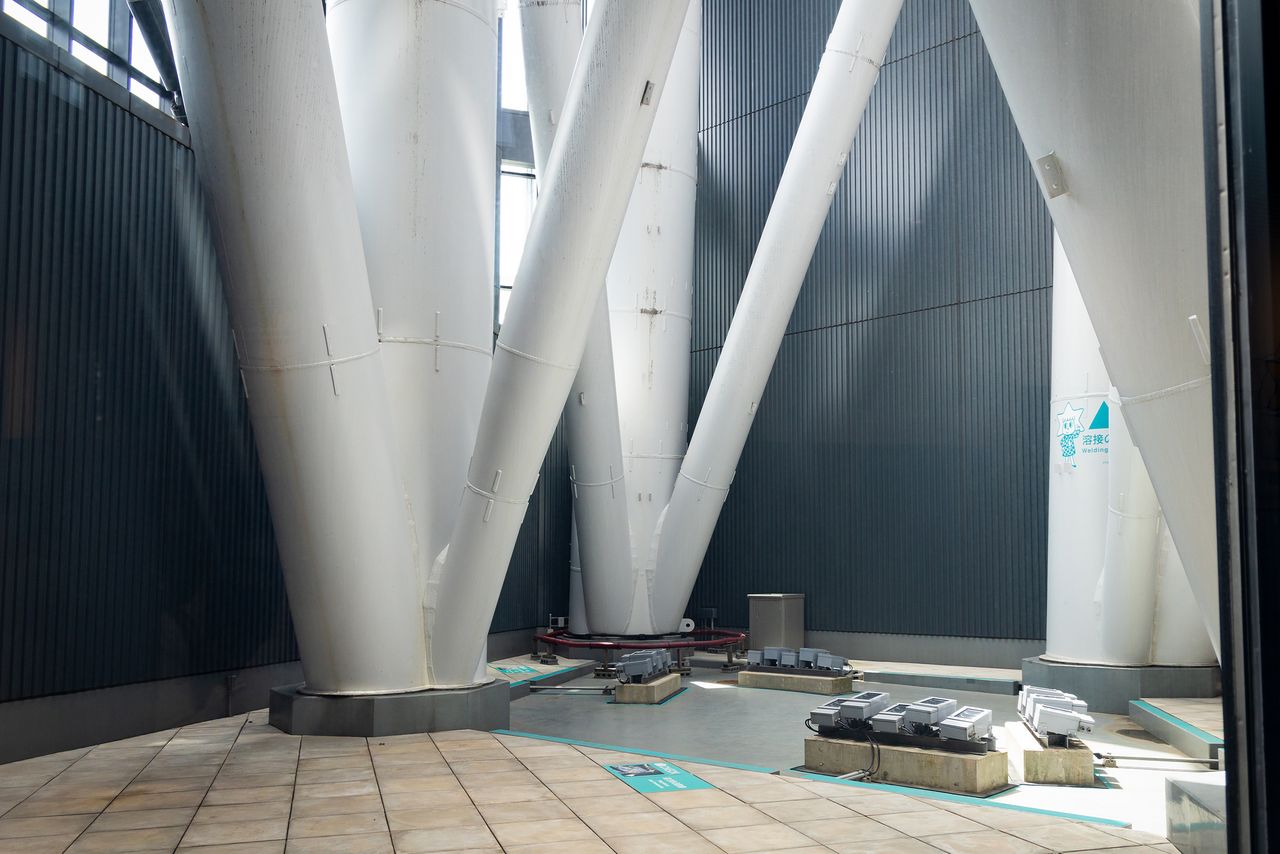 LED projectors installed around the west tripod. Small and versatile, they can be set up almost anywhere.

LED lighting is also compact and versatile. Lighting equipment can be installed to cast light downward. The glow from the projectors installed under the edges of the Tenbō Deck and the Tenbō Galleria, for instance, grows progressively paler the farther it reaches down the tower, reminiscent of the lacy edges of Mount Fuji’s snowcap. Head lighting technician Kaihō Kōichi describes this as “washing” the tower with color rather than simply lighting it up. It is a fitting attraction for Sumida, where echoes of Edo-period culture linger.

The downward-facing projectors also help reduce light pollution, which can affect neighbors with unwanted brightness, by confining illumination to the narrow bounds of the tower. 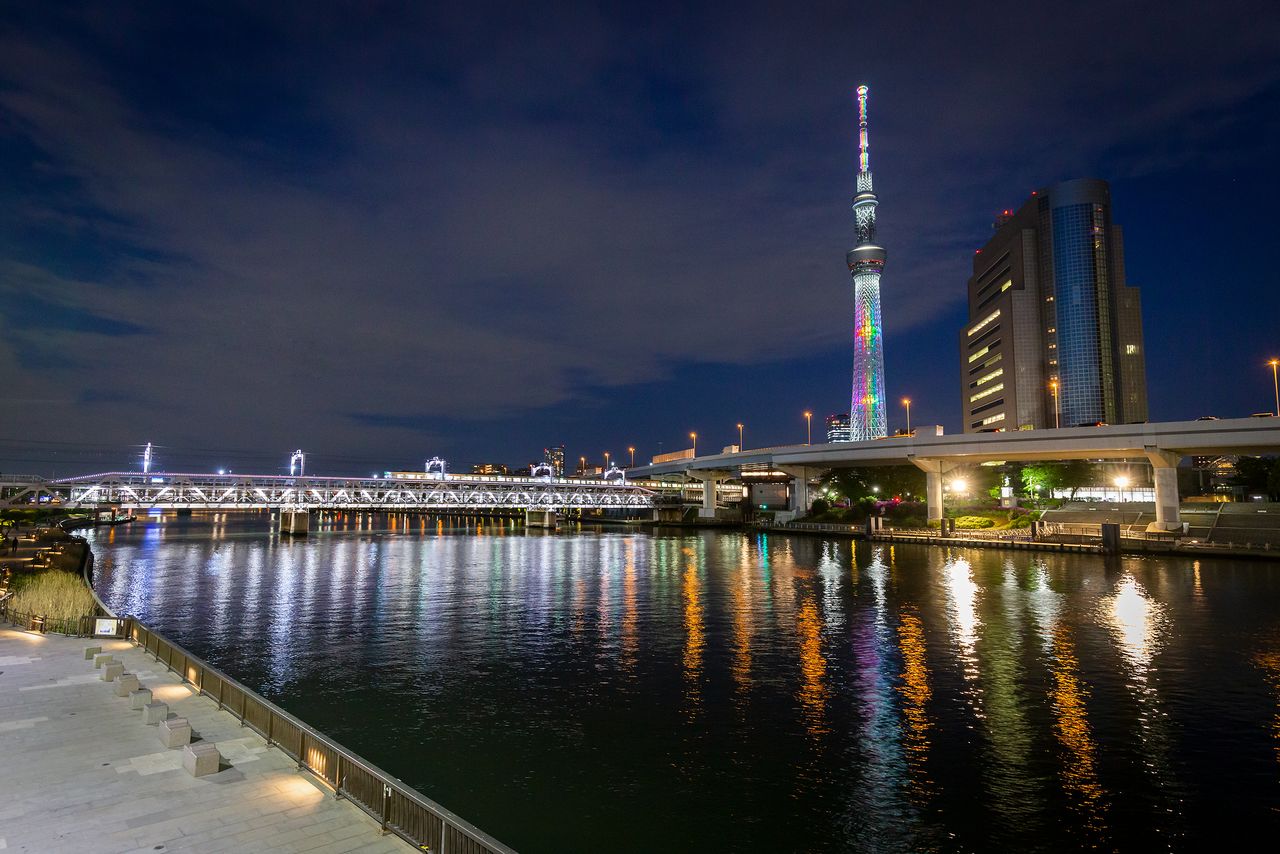 The tower is lit up in modulated shades of white for one hour after sunset. The Sumida Riverwalk, a pedestrian walkway connecting the Skytree area with Asakusa across the Sumida River, runs below the railway bridge span. The structure to the right is the Sumida municipal office. 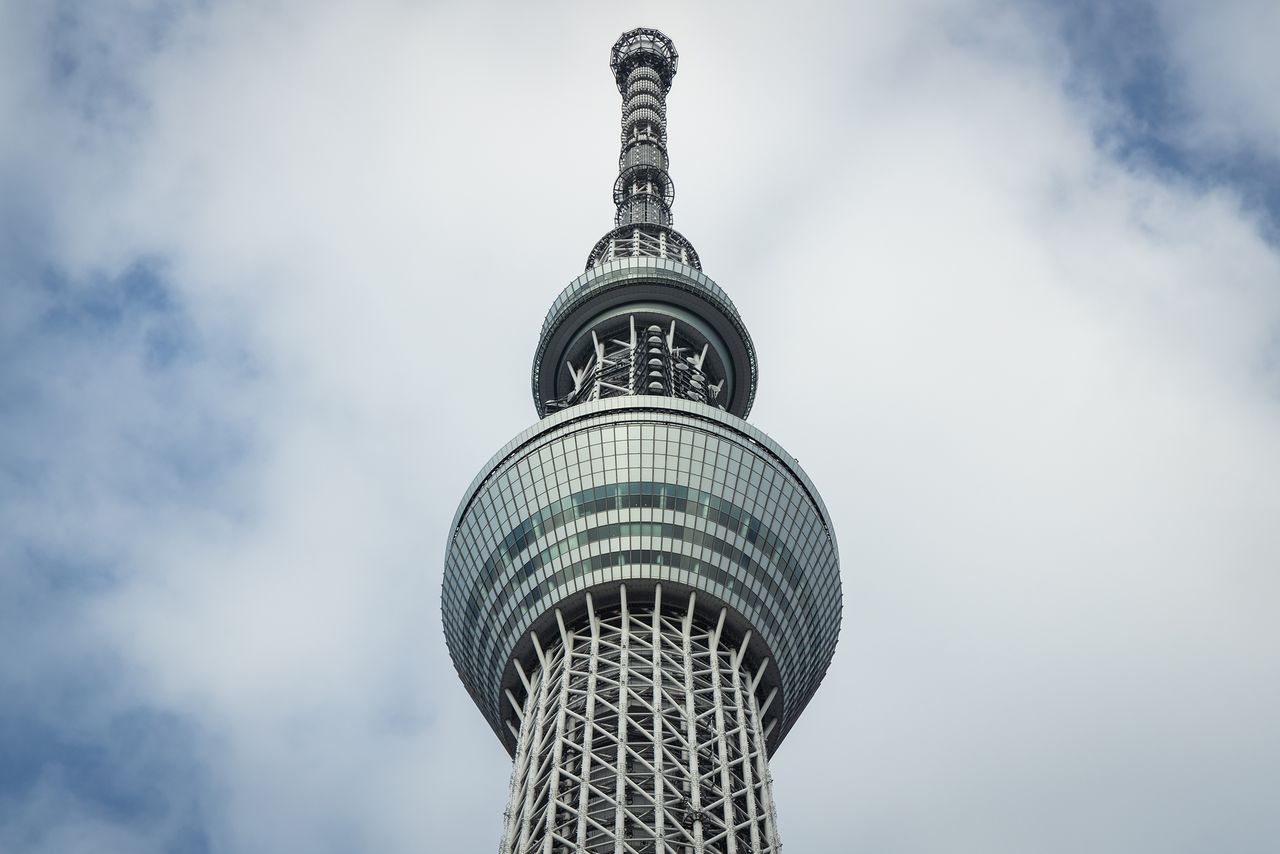 The lighting equipment is invisible from below. LEDs emit no ultraviolet light and attract fewer insects.

The lighting design repertoire initially consisted of the blue hue iki that conjures the stylish approach to life taken by residents of old Edo, and a pale lavender-and-gold shade called miyabi, or refined elegance. The orange nobori, or banner, was added in 2017. The lighting equipment was renovated in 2020, as were the three regular color patterns, and now the tower shines brighter than ever in the night sky.

Ten years after completion, Tokyo Skytree continues to evolve, as does the surrounding community. The COVID-19 pandemic has drastically reduced the number of visitors to the area, but a public relations officer for the Tokyo Skytree Town complex expresses gratitude to the surrounding community and Tōbu Railways users for their support and affirms that integrating with the neighborhood and contributing to its further development was the right decision.

Some may say that one visit to Tokyo Skytree is enough, but new discoveries await returnees. Take a stroll in the neighborhood and see for yourself. 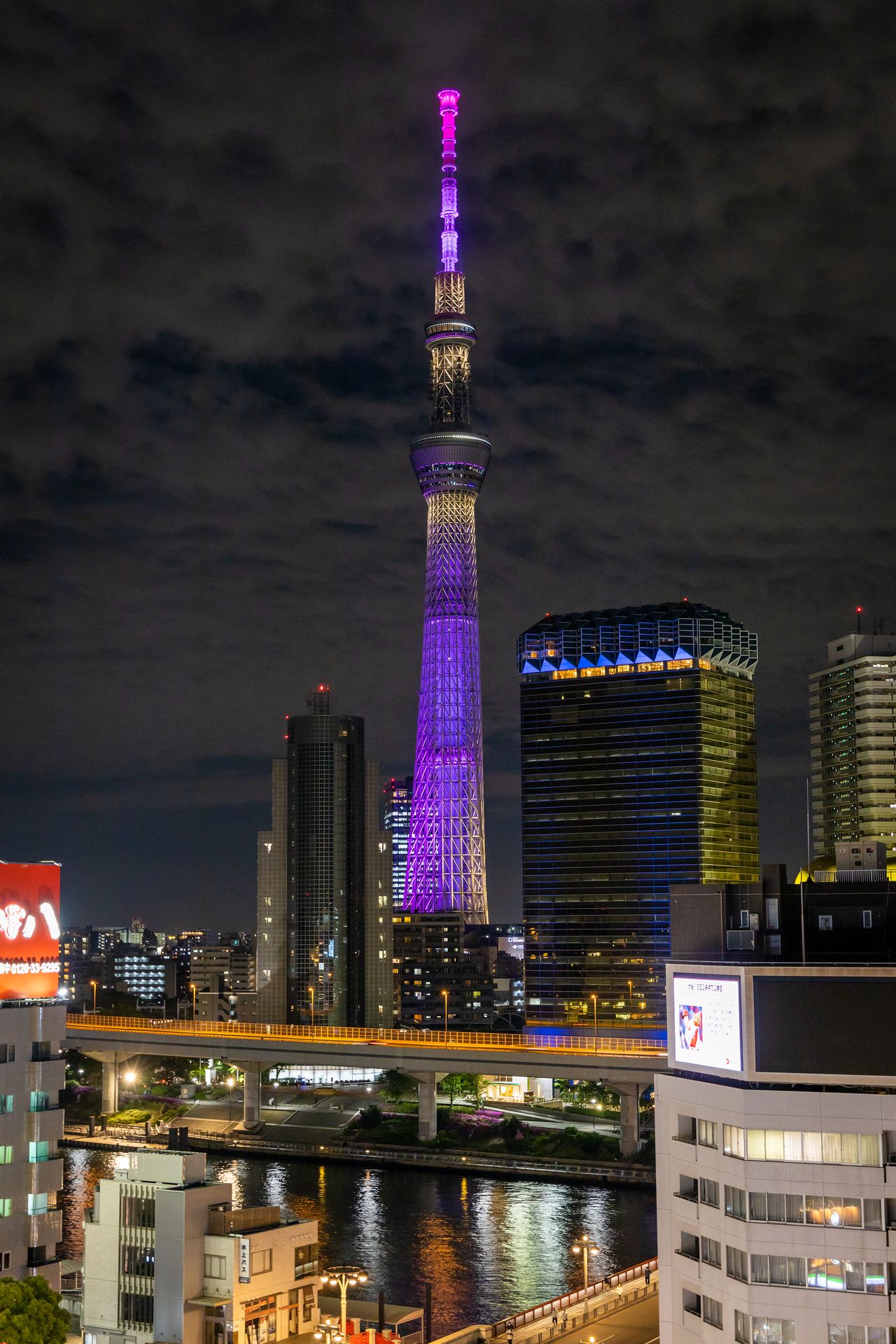 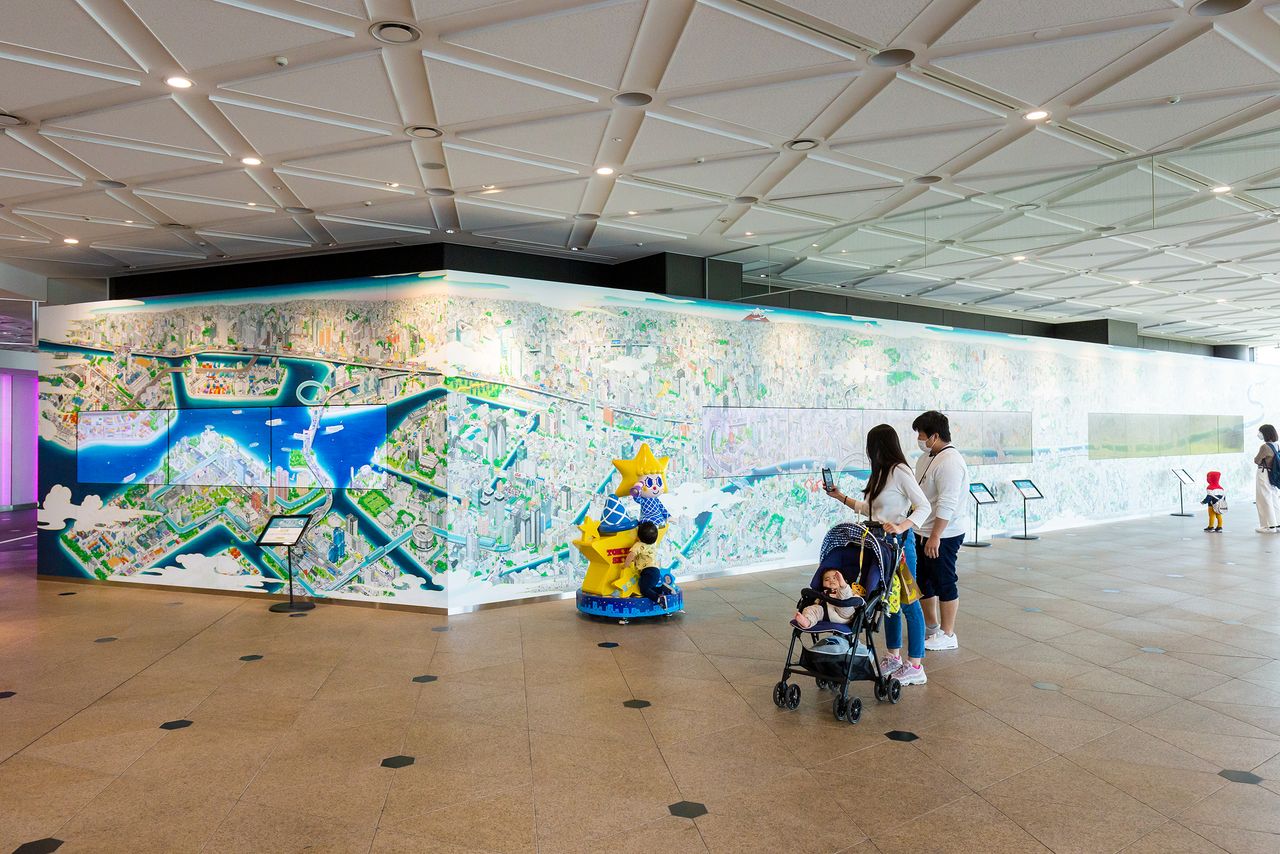 At the main entrance, visitors are greeted by a digital picture scroll of the Sumida River. Tokyo Skytree is the crown jewel of tourism to Sumida, the center of Tokyo’s shitamachi area and its lively traditional culture.