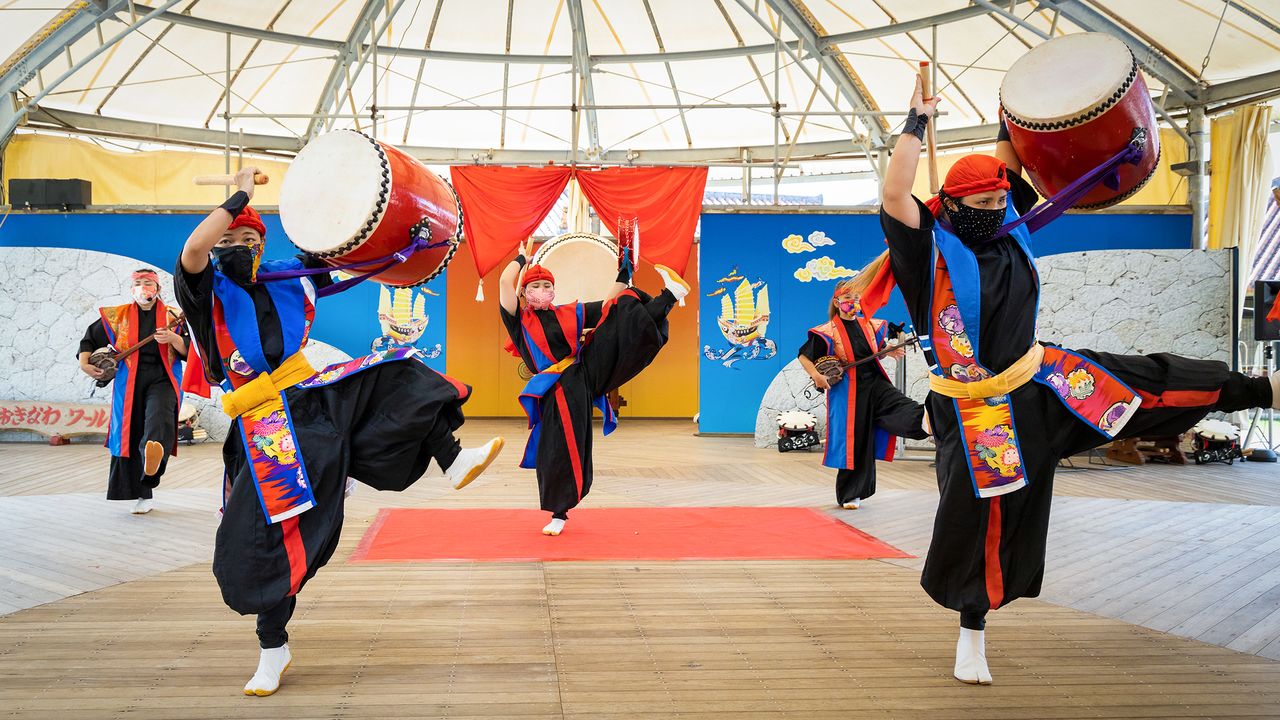 Travel Jun 17, 2022
The theme park Okinawa World in Nanjō on the southern tip of Okinawa Island offers natural and cultural attractions that include a vast limestone cave, an orchard of tropical plants, and traditional crafts and performing arts.

Okinawa World is a theme park located in Nanjō in Okinawa Prefecture. Opened in 1996, the park introduces visitors to history, culture, and nature of the islands. Attractions include a traditional crafts village where visitors can try their hands at such arts as indigo dyeing and glass blowing, a tropical orchard, a snake park featuring the native habu, and an immense limestone cave.

The park’s central attraction is the Gyokusendō, a massive, 5-kilometer long limestone cave. A 1967 survey of the cavity, which is thought to have formed around 300,000 years ago, discovered many spectacular grottos and other geological formations. An 890-meter section of the cave opened to the public in 1972.

As a coral reef island, Okinawa is rich in limestone. Gyokusendō is the largest of the some 600 limestone caves found on the island, and also boasts the most stalactites and stalagmites of any cave in Japan, with more than 1 million. 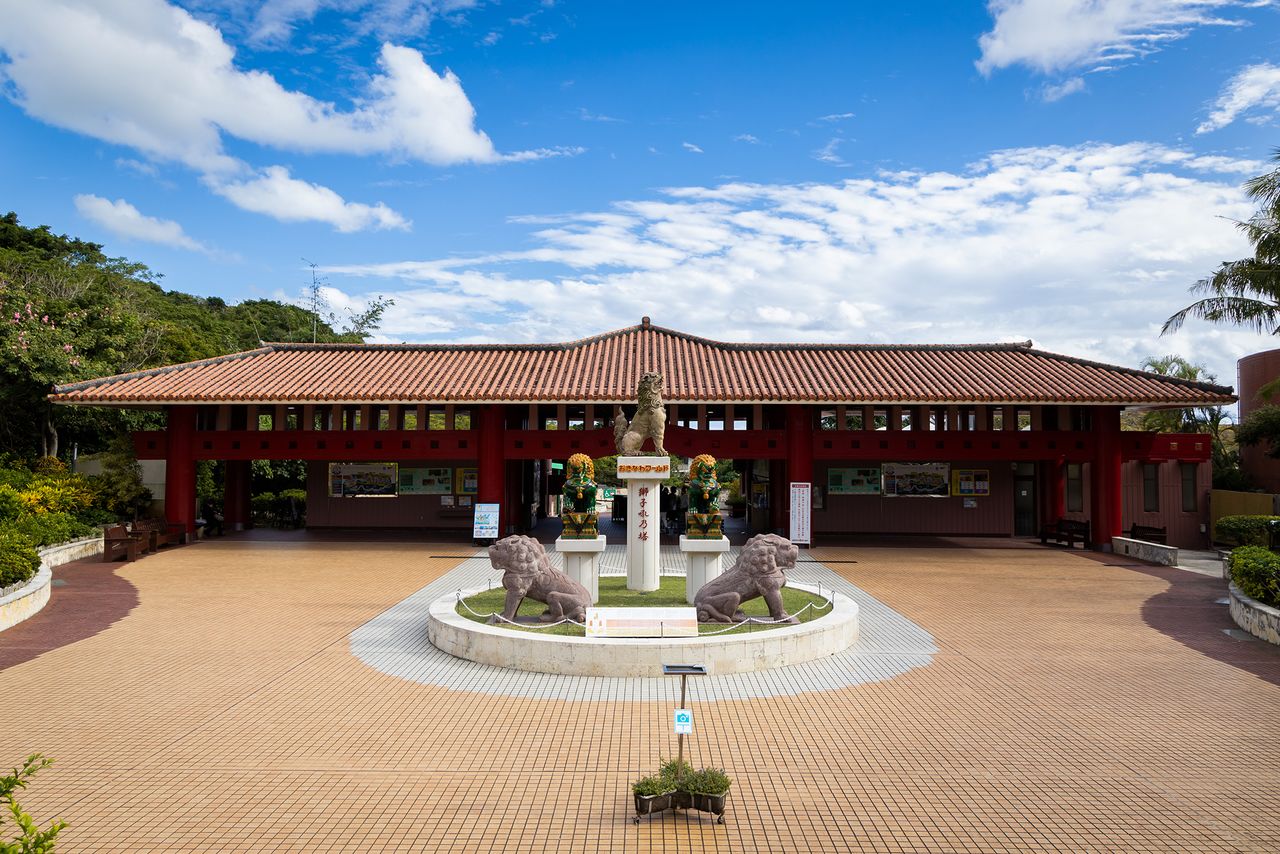 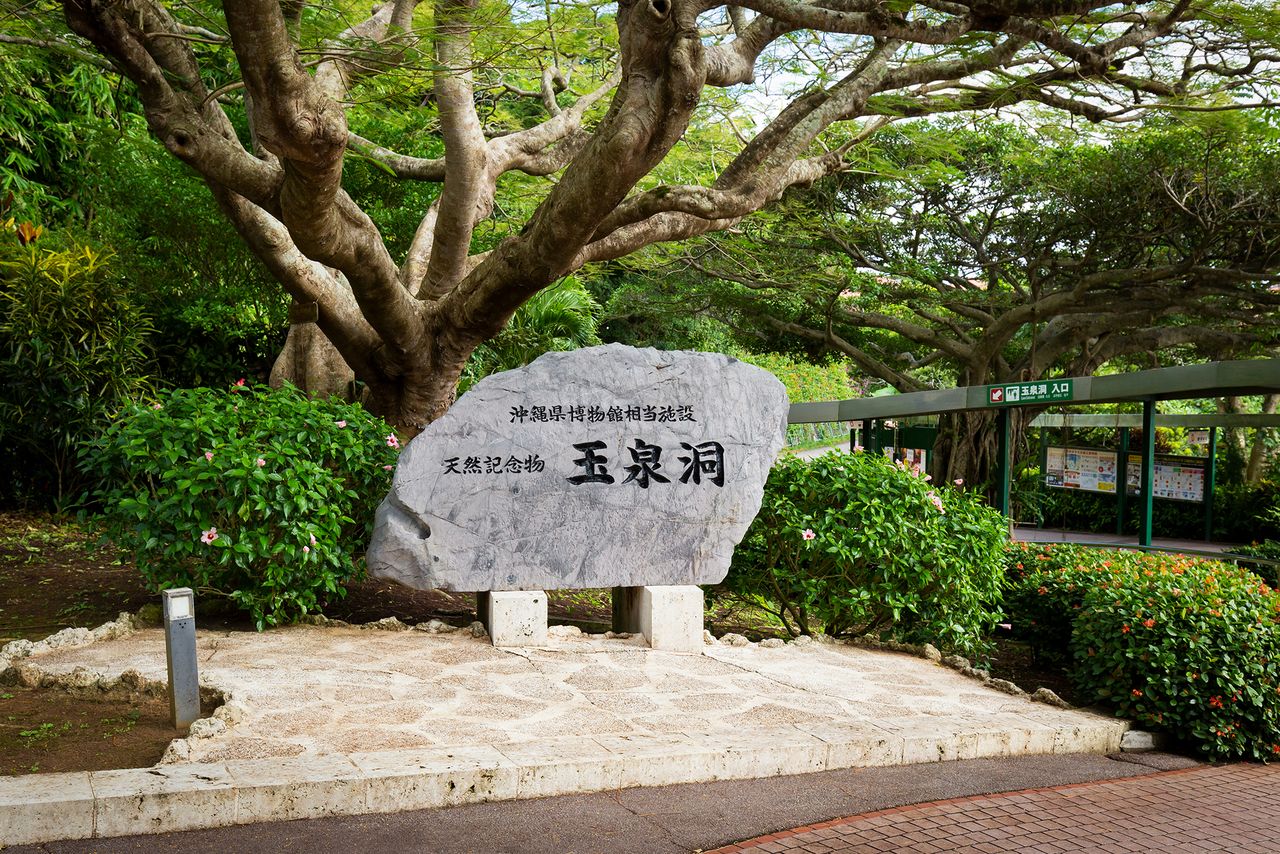 A large stone marks the entrance to the Gyokusendō limestone cave. 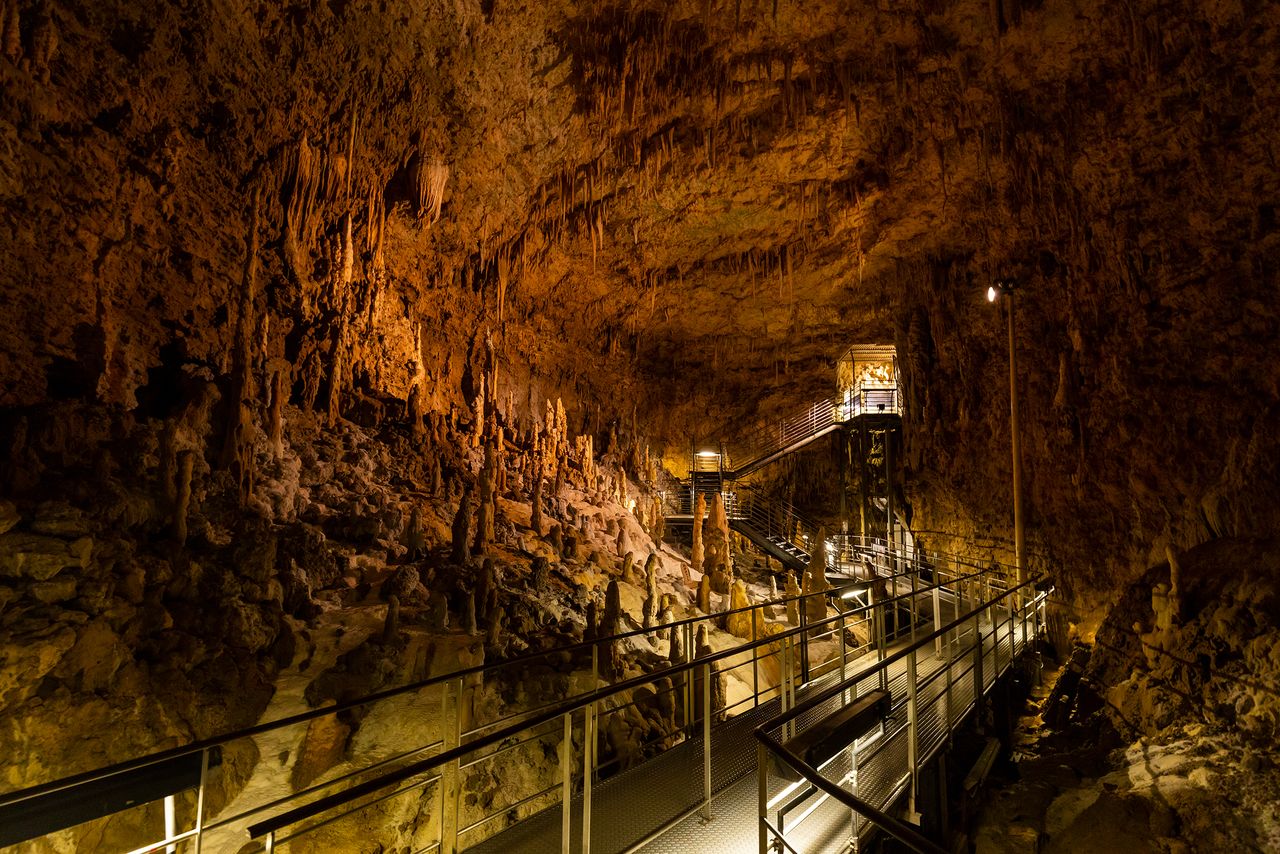 Stalactites and stalagmites jut from the walls of Gyokusendō’s cavernous Tōyōichidō chamber.

The entrance of Gyokusendō is located just inside the park’s main gate. The cave remains a constant 21 degrees Celsius year round, offering visitors a respite from the heat and humidity of Okinawa’s subtropical climate. A walkway passes through the cave’s many chambers, taking visitors past pools of sparkling blue water and countless stalactites and stalagmites formed by the steady drip of water over eons. 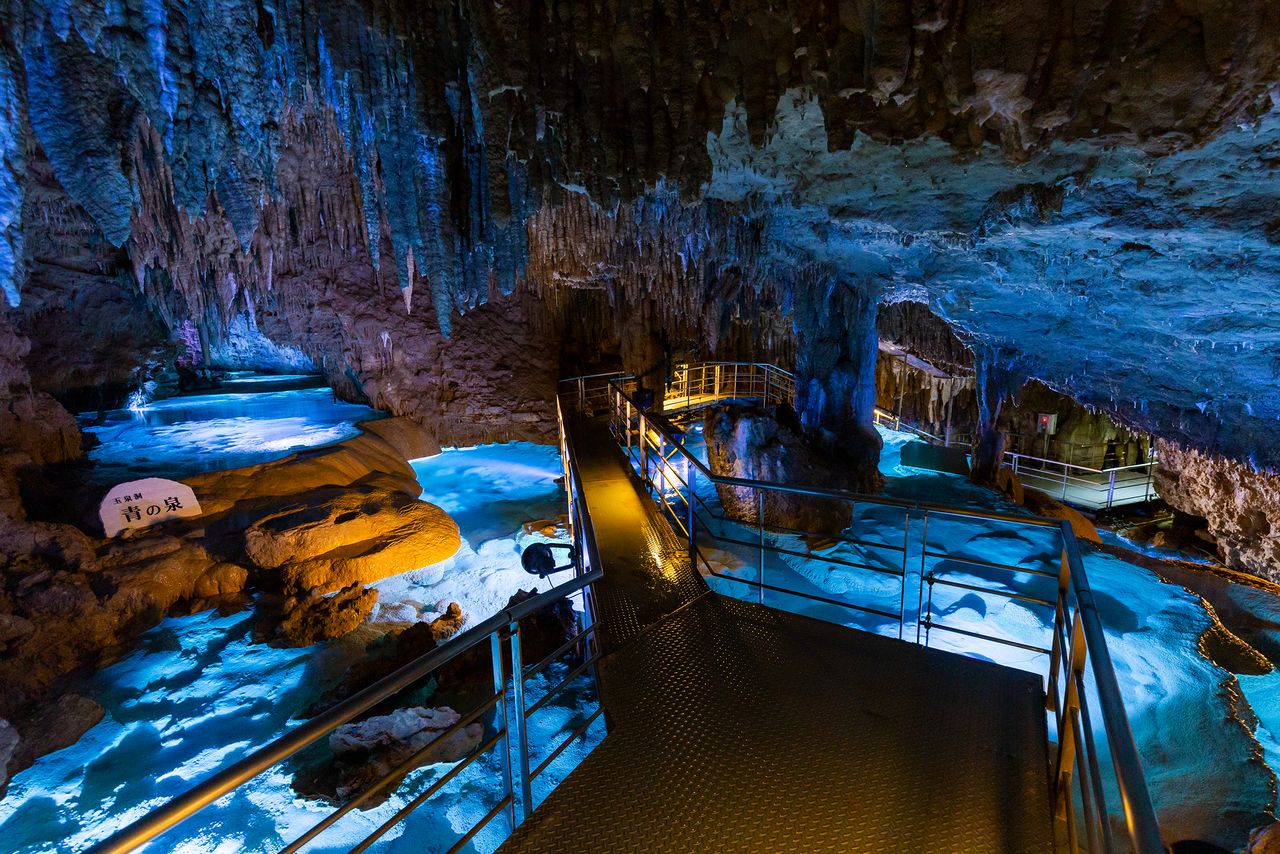 The iridescent blue Ao no Izumi is one of the many underground pools in the cave. 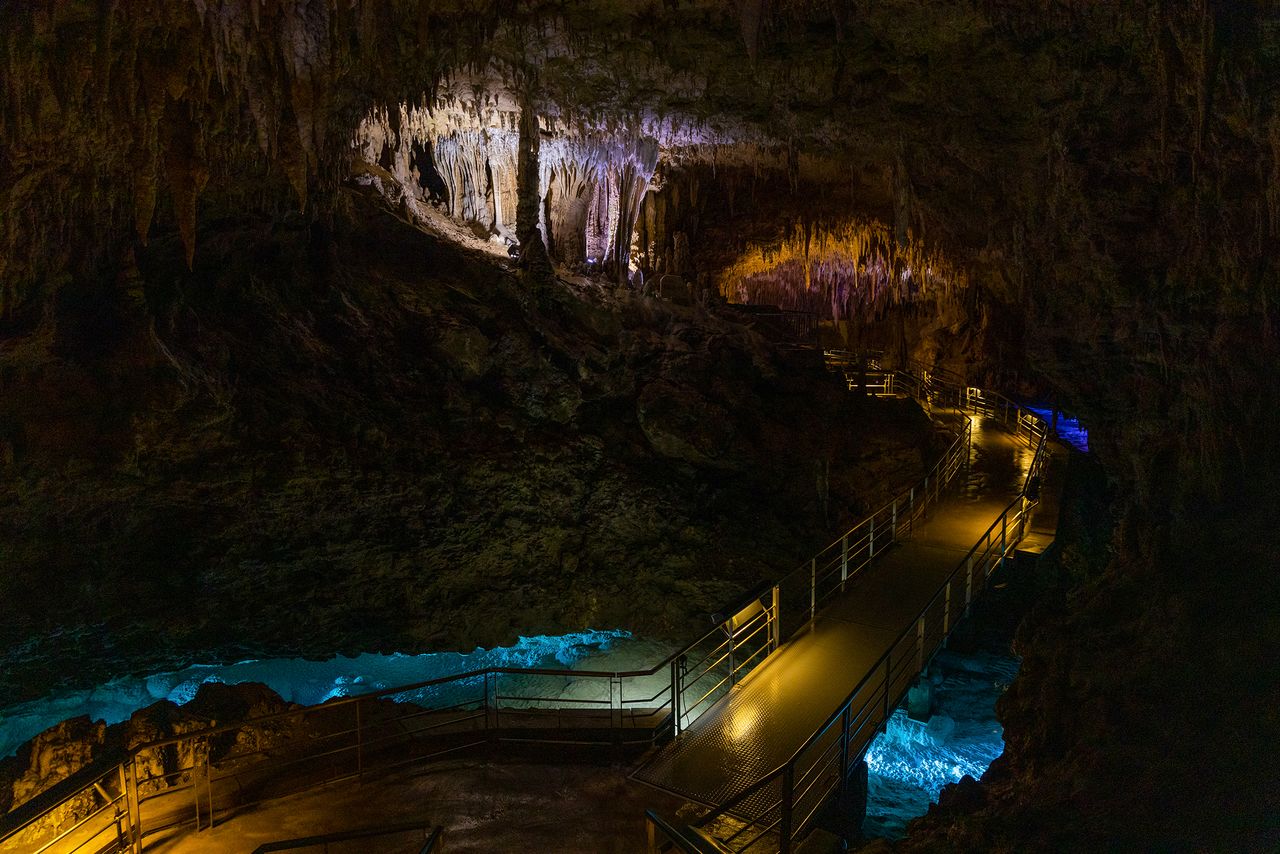 Exiting the cave by escalator, visitors step into the park’s tropical orchards populated by 450 fruiting trees and plants. Mango, papaya, and pineapple, along with rarer plants like dragon fruit and lychee, are among the around 50 varieties cultivated. The diversity ensures that several types of plants are in bloom or have ripening fruit in any given season, filling the orchard with sweet, tropical scents.

Adjacent to the orchard is the traditional craft area where visitors can try their hands at such arts as weaving, dyeing, and the yachimun style of ceramics. Many of the crafts were conveyed to the islands in ancient times through the Ryūkyū Kingdom’s trade with China and civilizations in Southeast Asia. However, Ryūkyū glass is a relatively new addition that took root during the US military’s occupation of Okinawa in the postwar period. 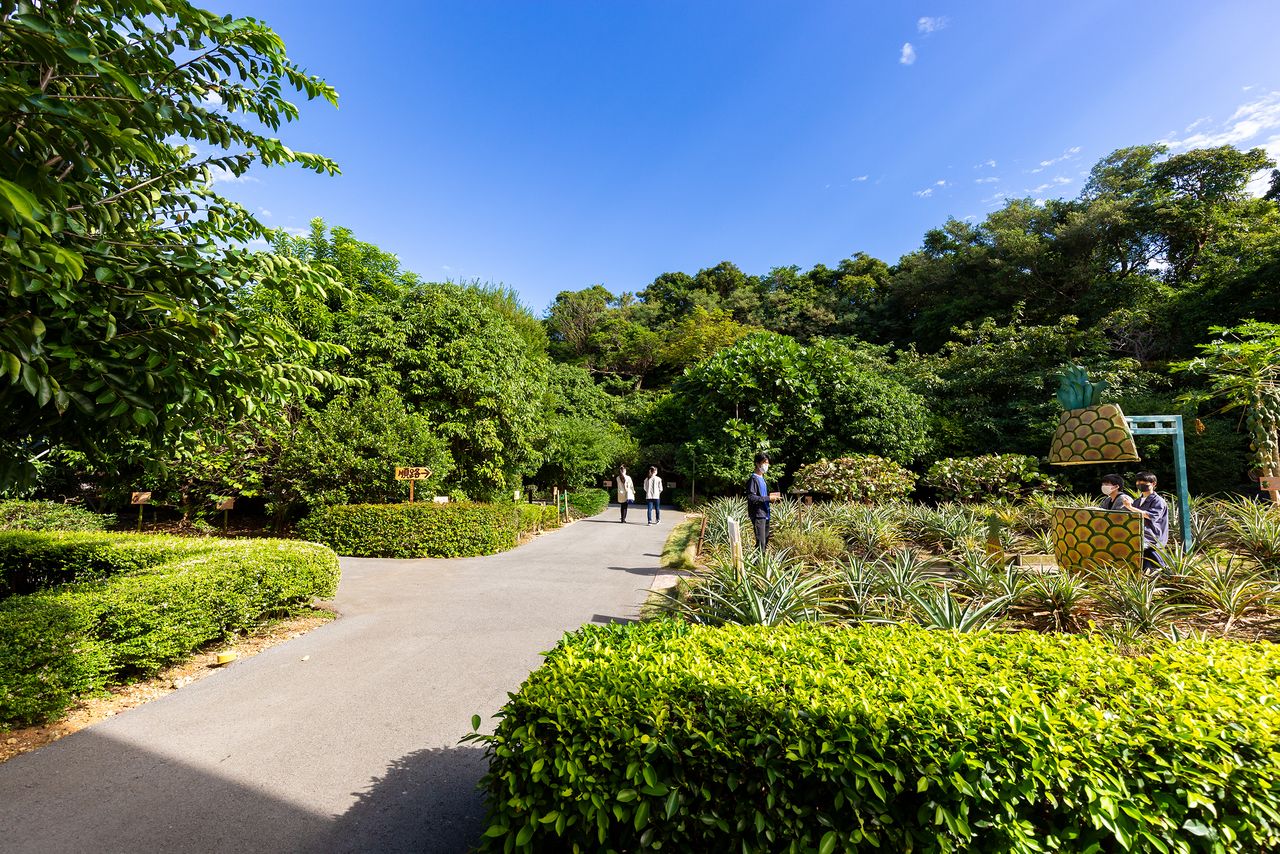 A wide variety of fruiting plants grow in the tropical orchard, including many local specialties. 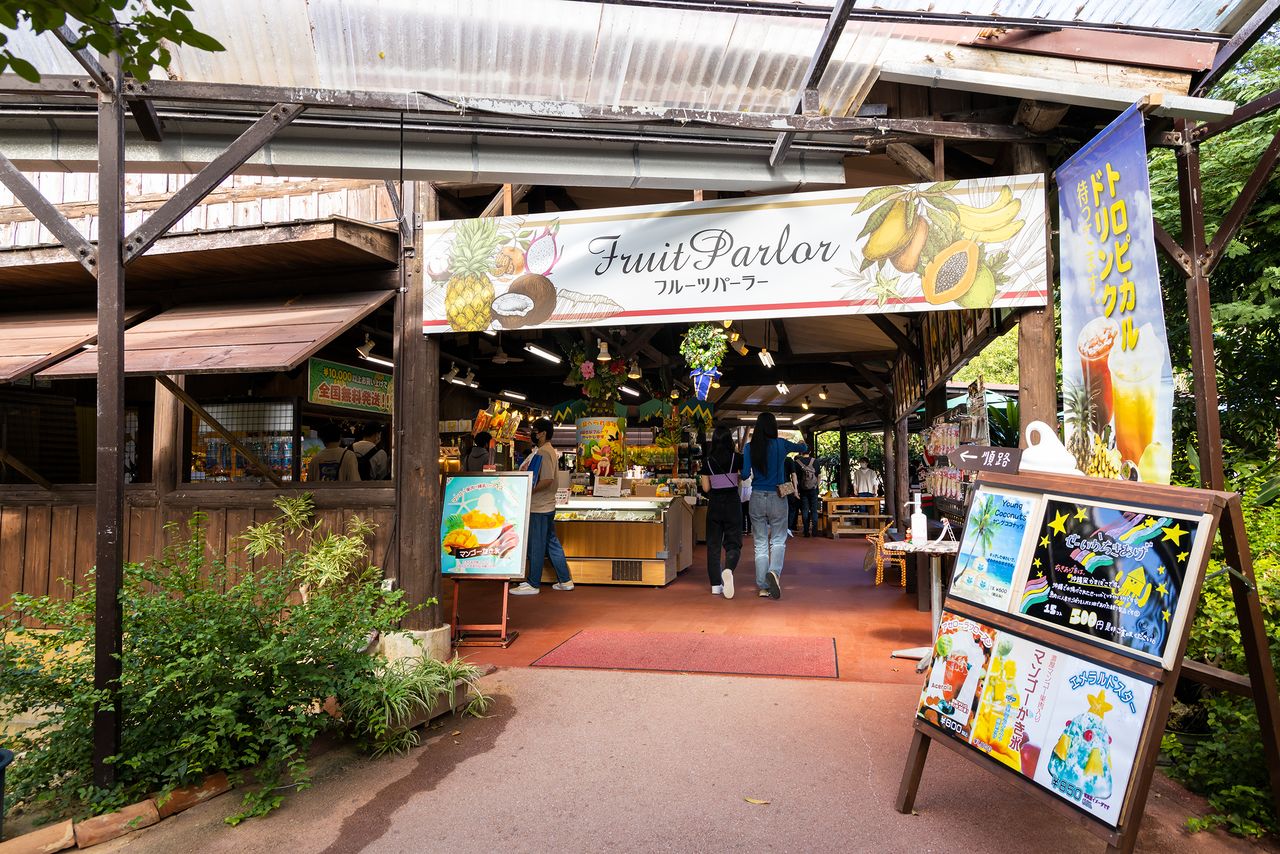 Visitors can enjoy treats like fresh juice at the Fruit Parlor refreshment stand. 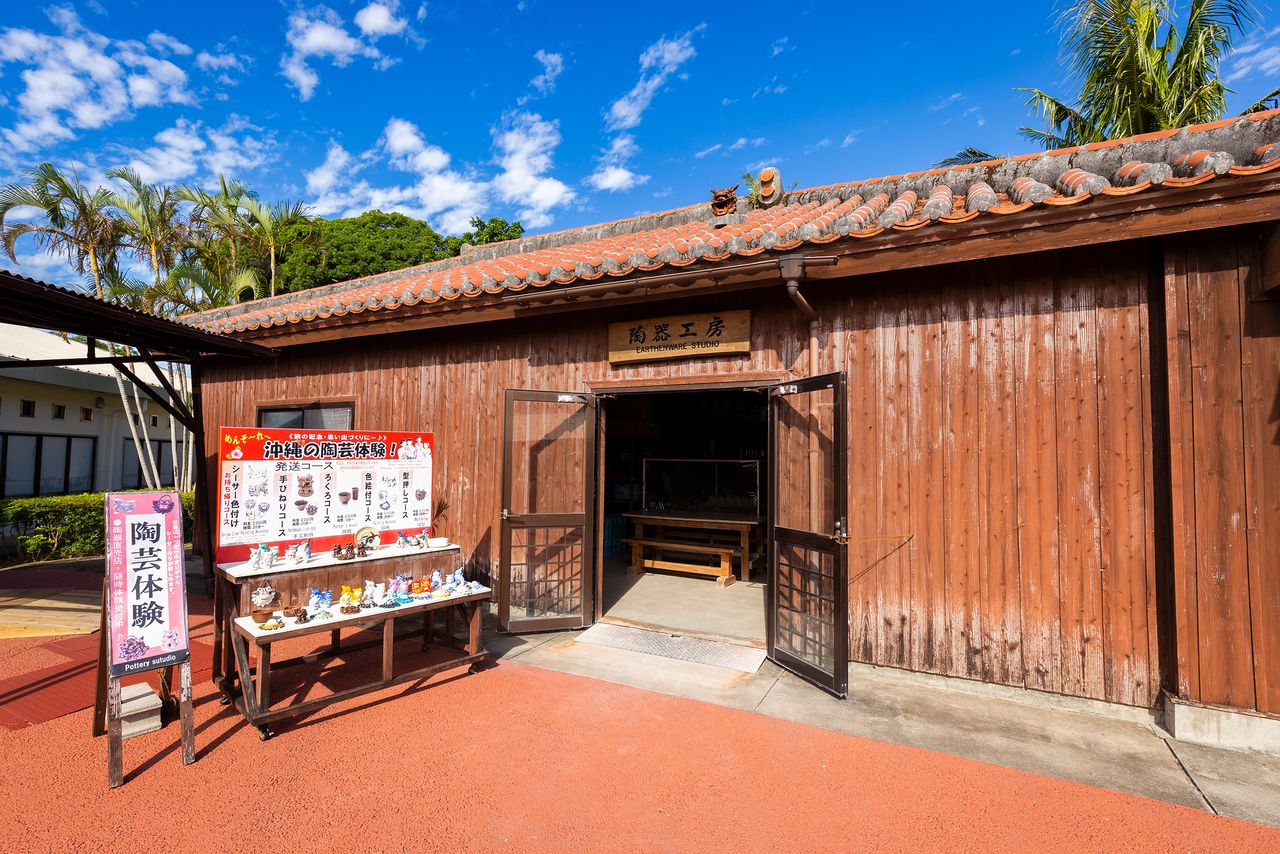 A yachimun ceramics workshop inside a traditional house.

The Kingdom Village area recreates an Okinawan settlement from the days of the Ryūkyū Kingdom. Visitors can explore four traditional homes rebuilt on the site, one of which is registered a tangible cultural property. The buildings present a number of distinguishing Okinawan characteristics, including red-tiled roofs. There is also a stone structure called a fūru that in the past served as a latrine and pen for keeping pigs.

The buildings in the village house various workshops for learning about traditional crafts like bingata dyeing and paper making. The adjacent Okinawa Culture Center has exhibits detailing the history of the island’s iconic guardian deities, the fierce-looking shīsa. 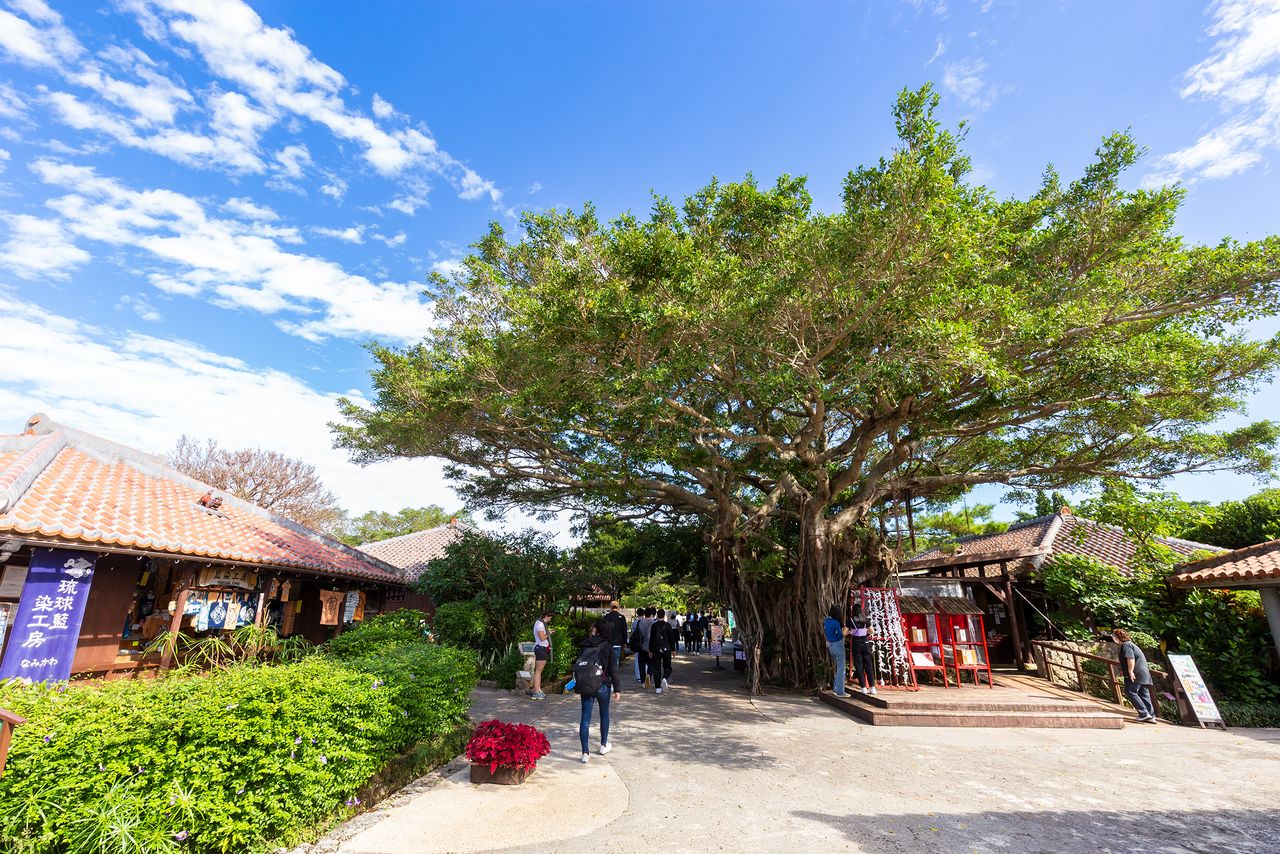 Traditional houses with red-tiled roofs in the Kingdom Village. 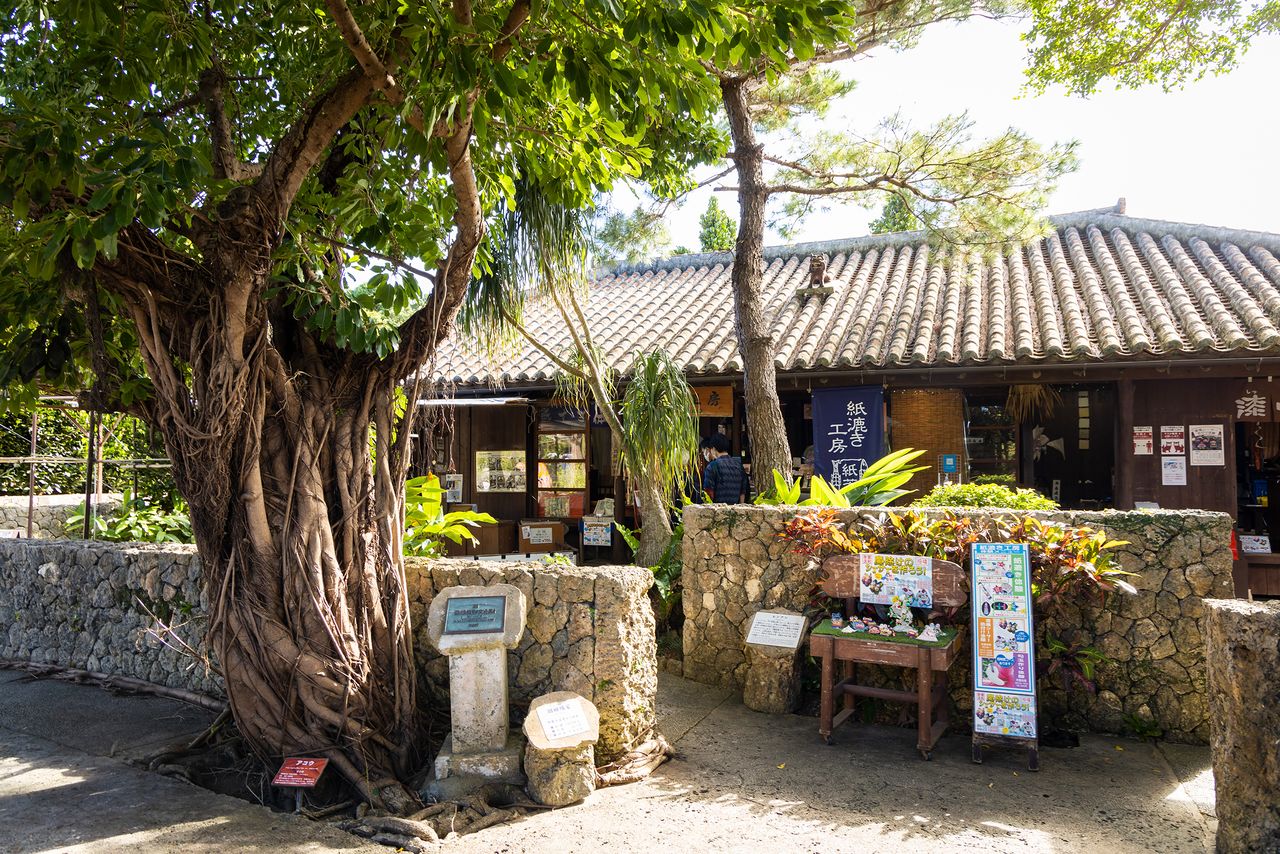 The former Taba family residence is registered an important cultural property. It houses a workshop for traditional paper making. 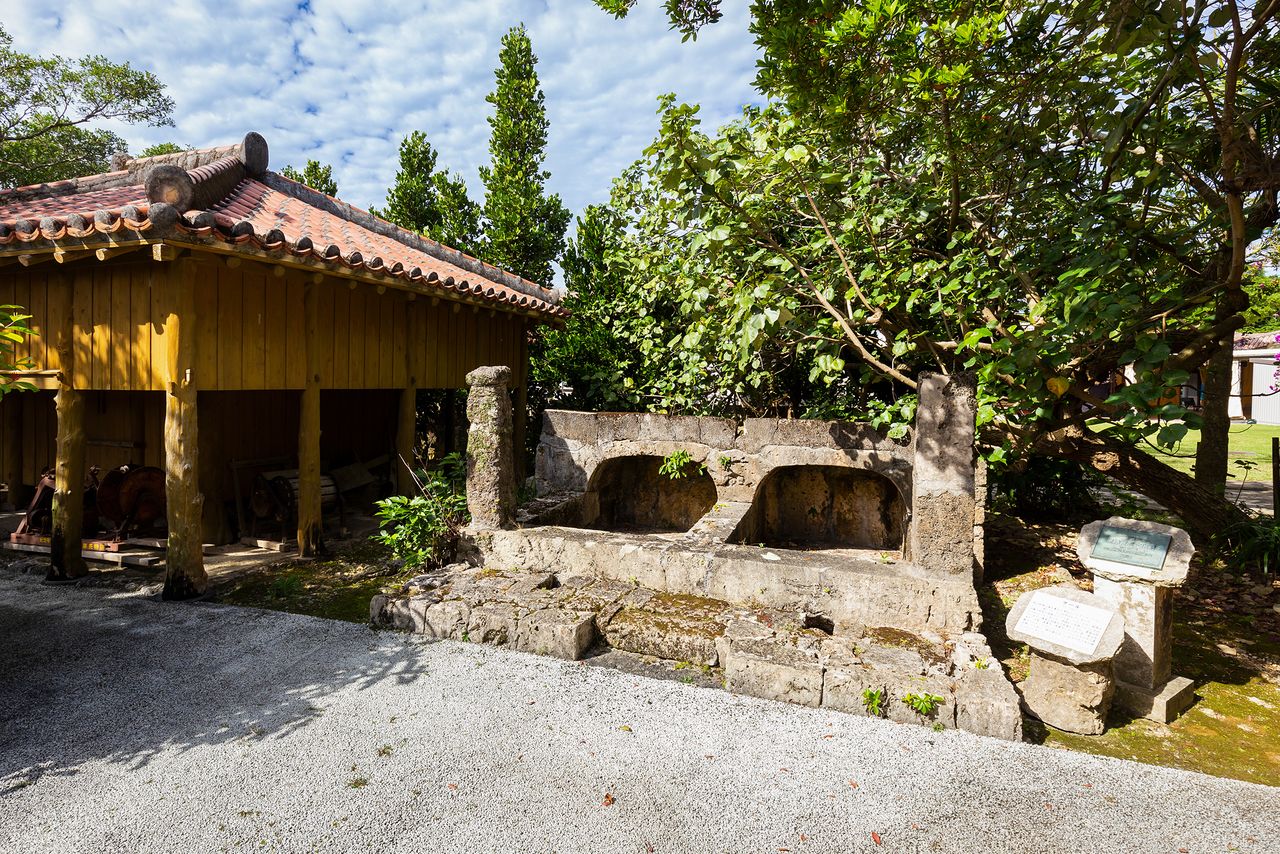 A fūru at the former residence of the Chinen family dates from the nineteenth century. The stone structure served as a latrine and pen, with the human excrement used to feed pigs. Fūru were used until fairly recently, but were banned in the postwar period as unsanitary. 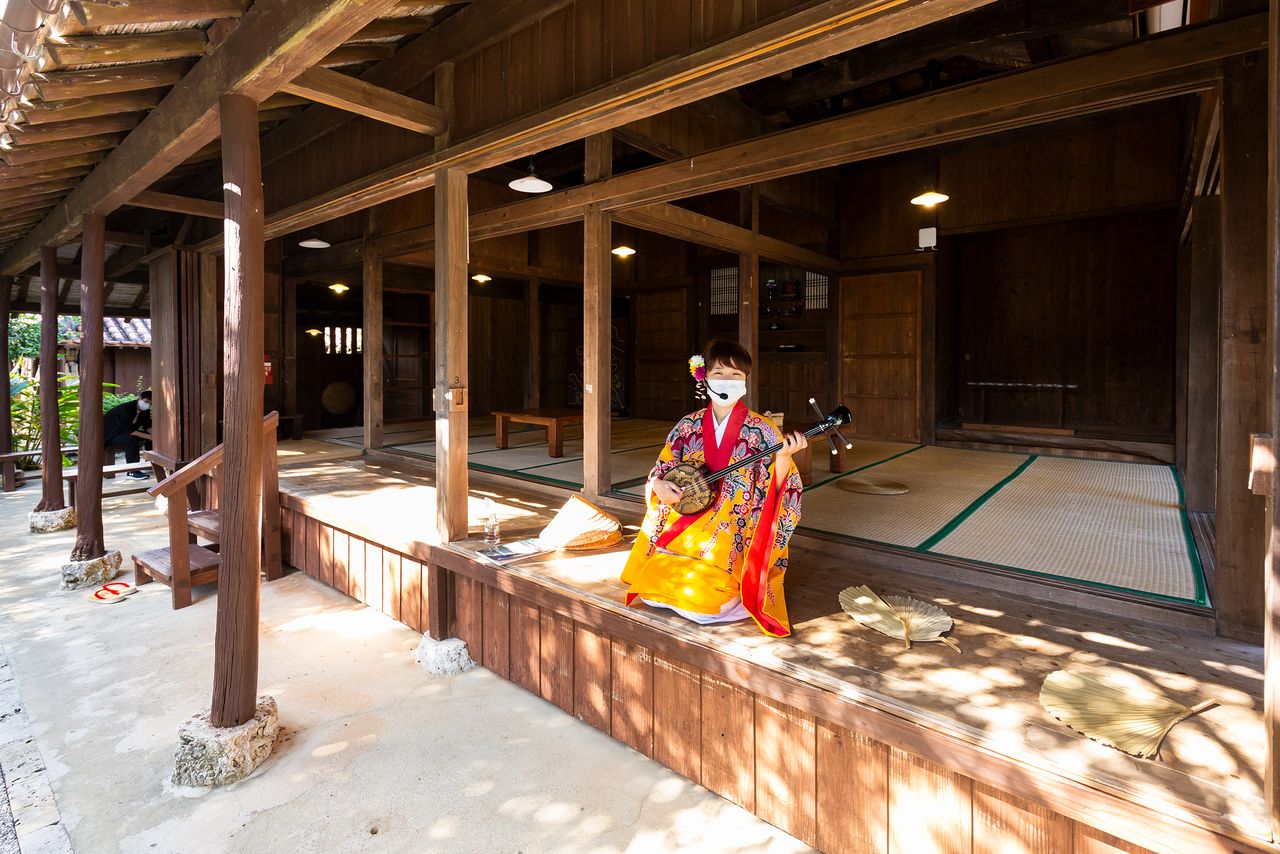 A performer plays a sanshin, a traditional Okinawan three-string instrument similar to a shamisen. Visitors are welcome to give it a try. 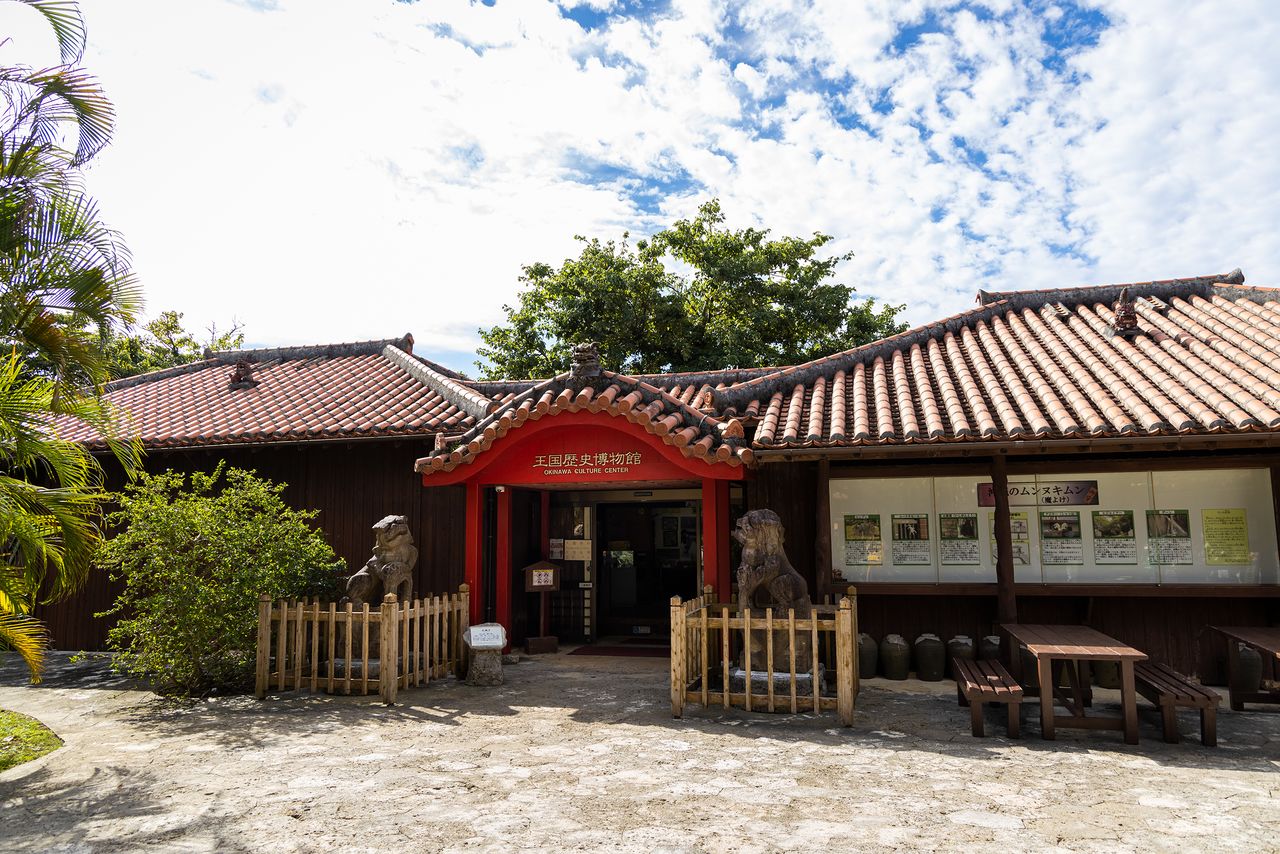 The Okinawa Culture Center. Like many other buildings in the park, it has a red-tiled roof in the traditional Okinawan style.

In Okinawa, the lively eisā, a performance combining dancing and drumming, is staged on the last day of the Obon festival in summer to see off visiting ancestral spirits. At the park’s covered stage, performers dressed in traditional attire put on a captivating version of the dance, along with other performances.

The Habu Museum Park near the main entrance is the site of an animal show staring the habu (yellow-spotted pit viper) that provides visitors an up-close look at the creature. The venue also houses a display on the biology and the cultural importance of the venomous snakes, along with exhibits of other endemic animals, including sea snakes and the Okinawa tree lizard. Visitors will want to take a commemorative picture with one of the park’s large albino snakes, which are considered to bring good luck. 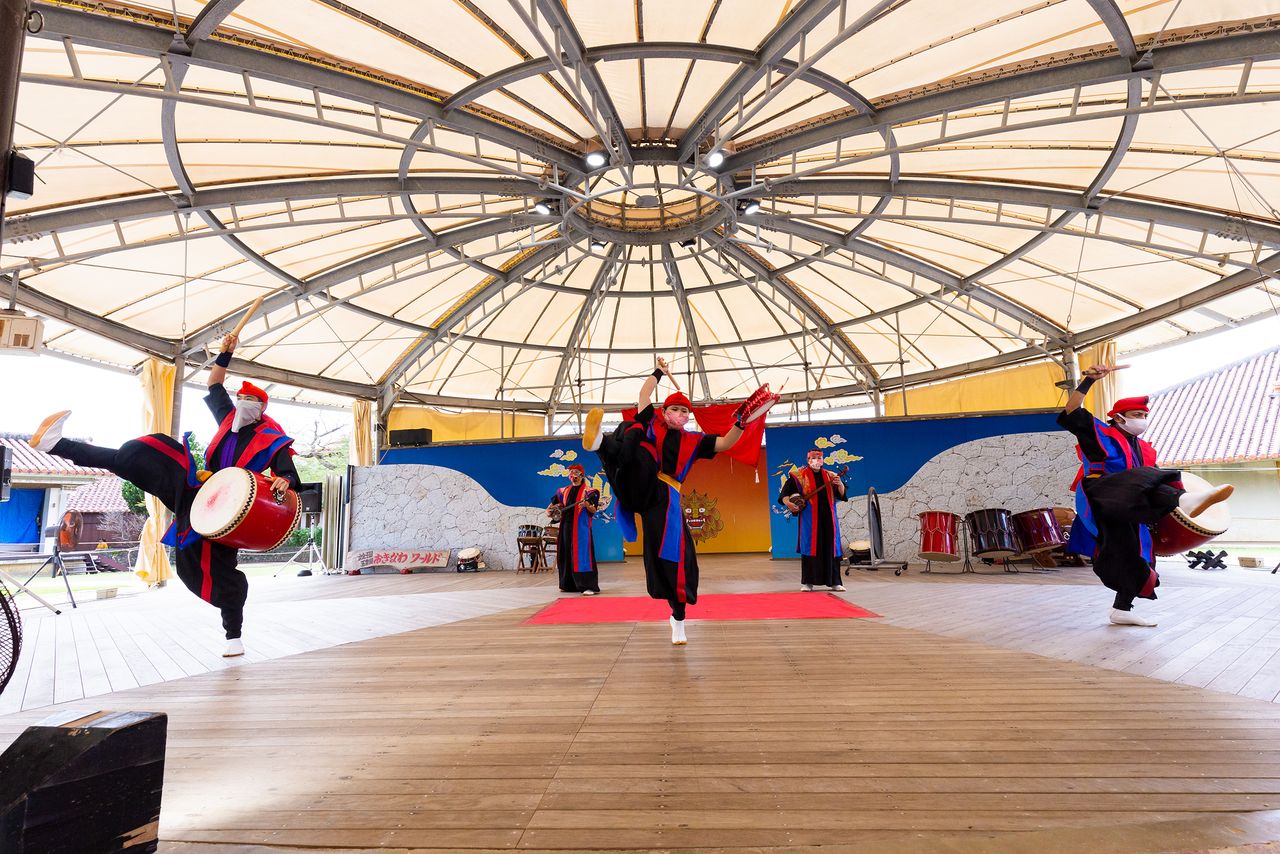 Dancers perform in the Super Eisā Show, which lasts around 30 minutes. 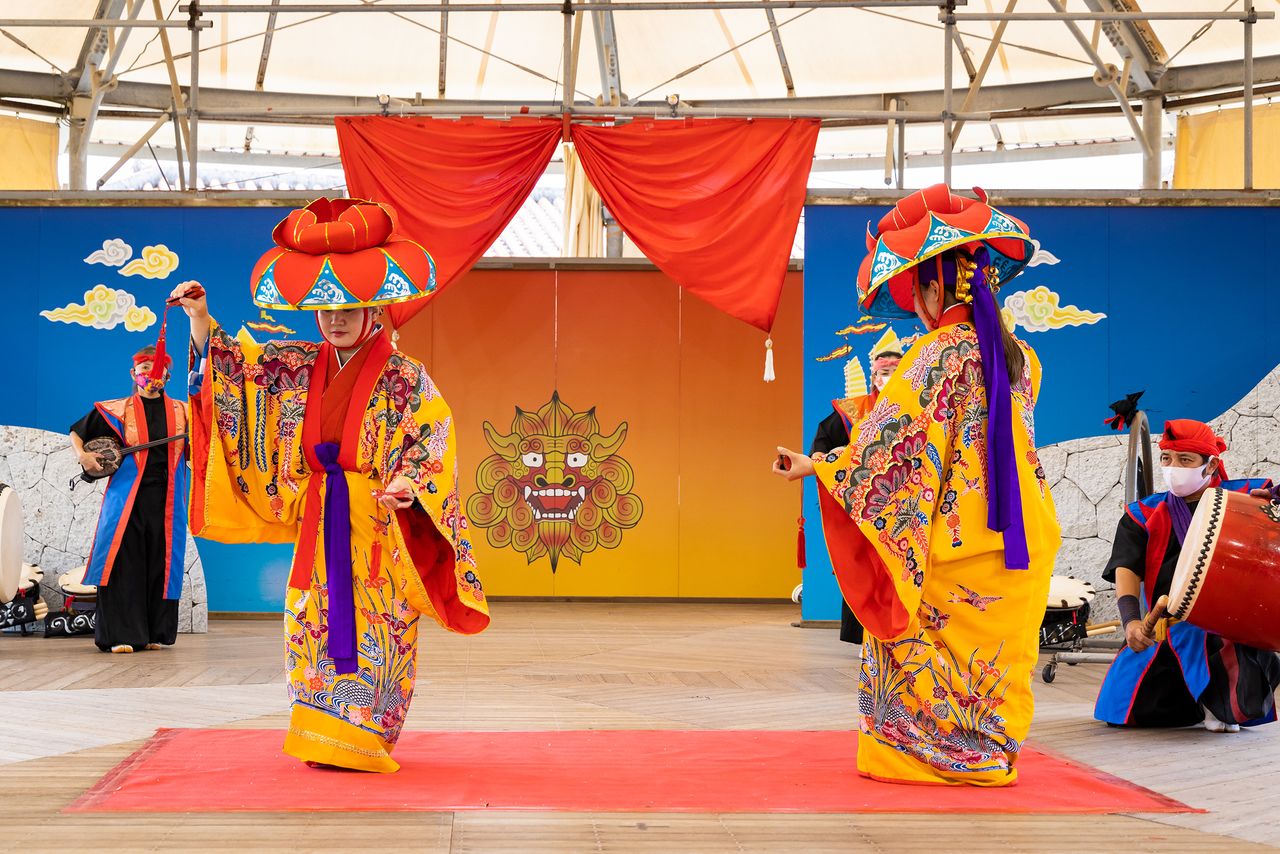 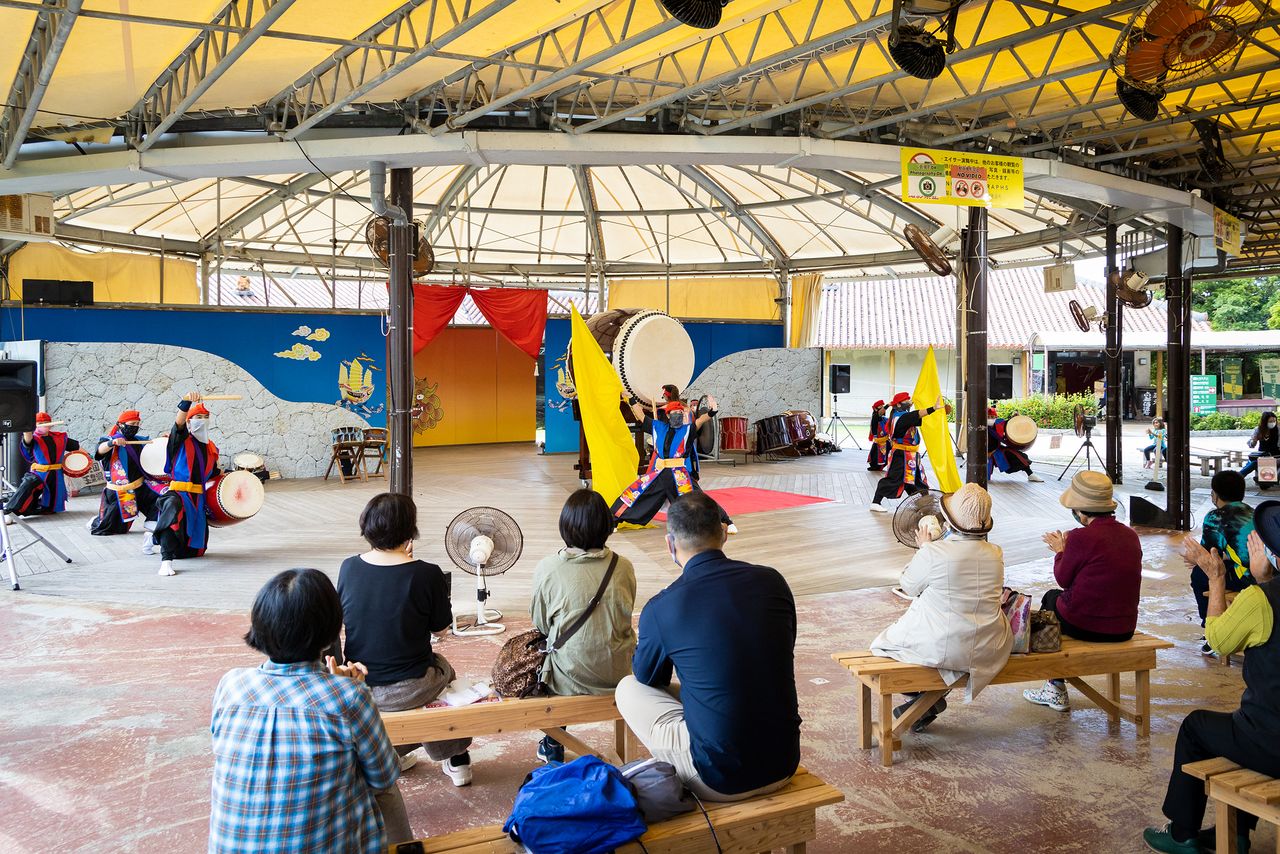 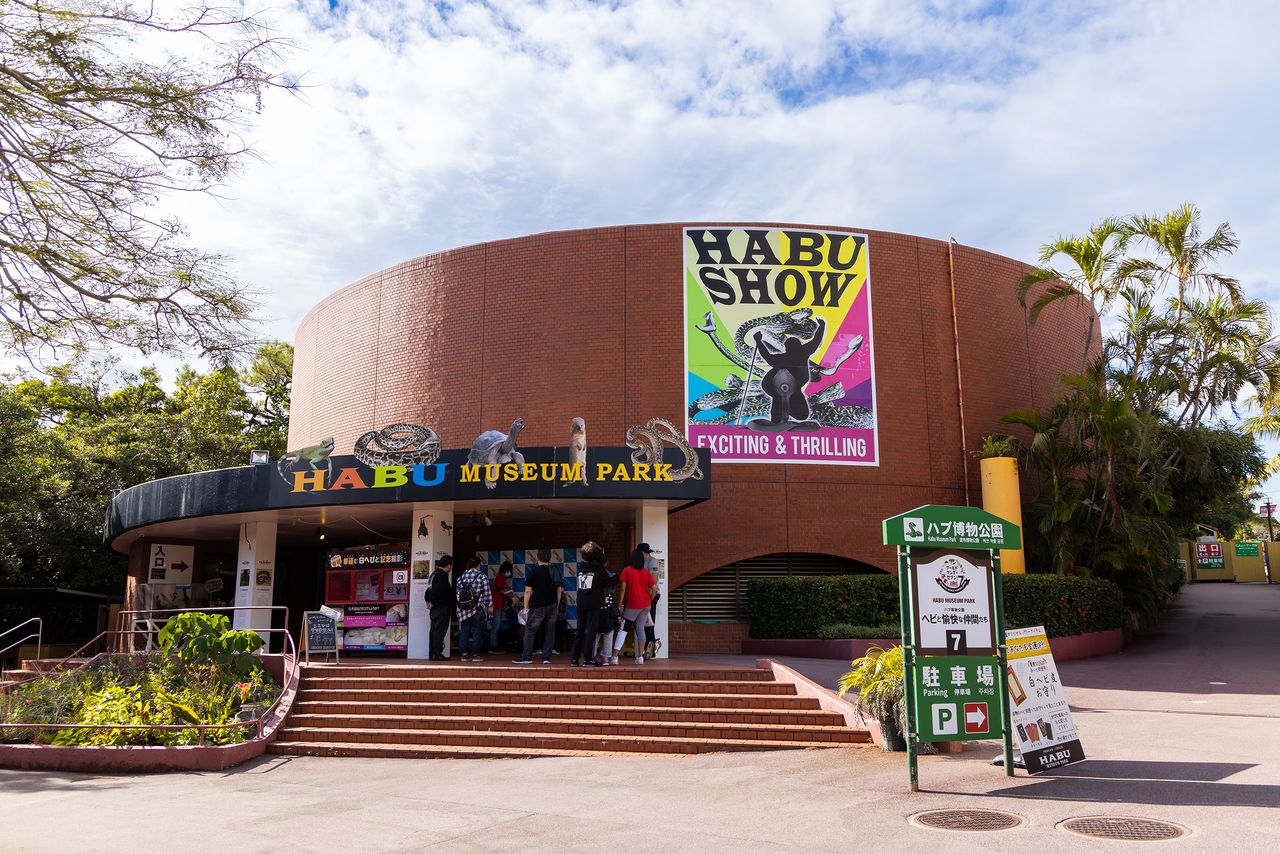 The Habu Museum Park has exhibits on different species of lizards and other animals found in Okinawa.

Okinawa is known for the medicinal drink habushu, made by preserving habu in the strong Okinawa liquor awamori. Visitors uninterested in the concoction can peruse the selection of local beers made by Nanto Brewery located onsite, or visit the park’s store, which carries an array of craft items and souvenirs. 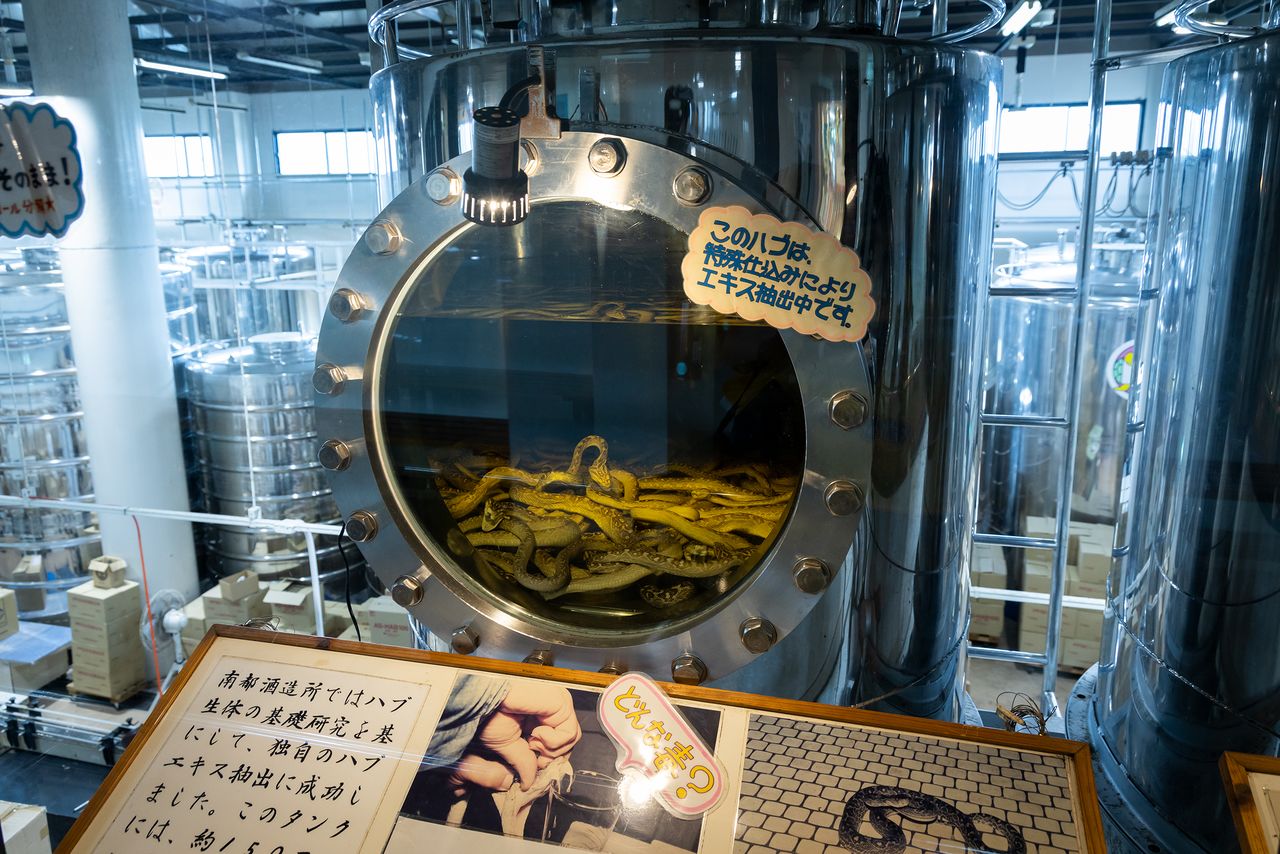 A snake-filled vat of habushu. 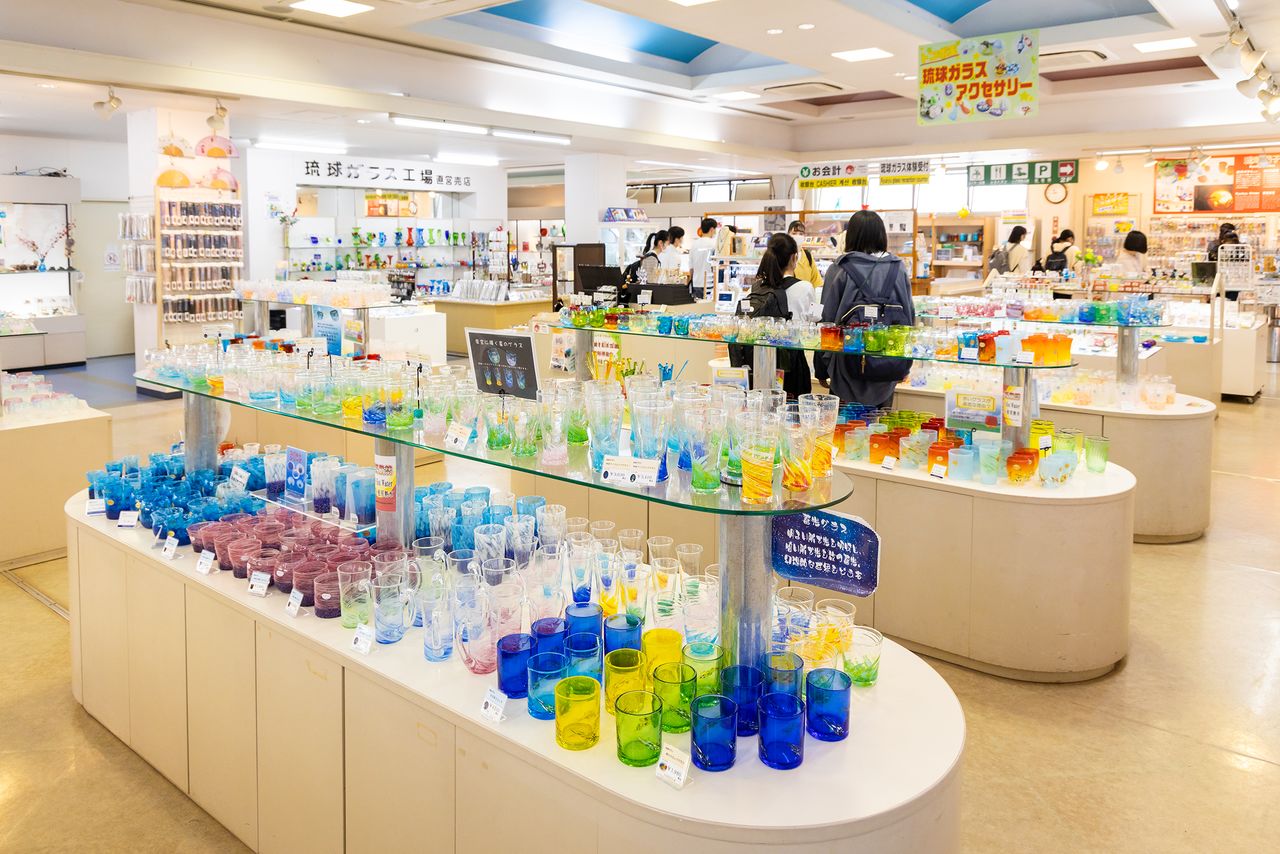 Souvenir shopping at the park’s shop is the perfect way to finish a visit.