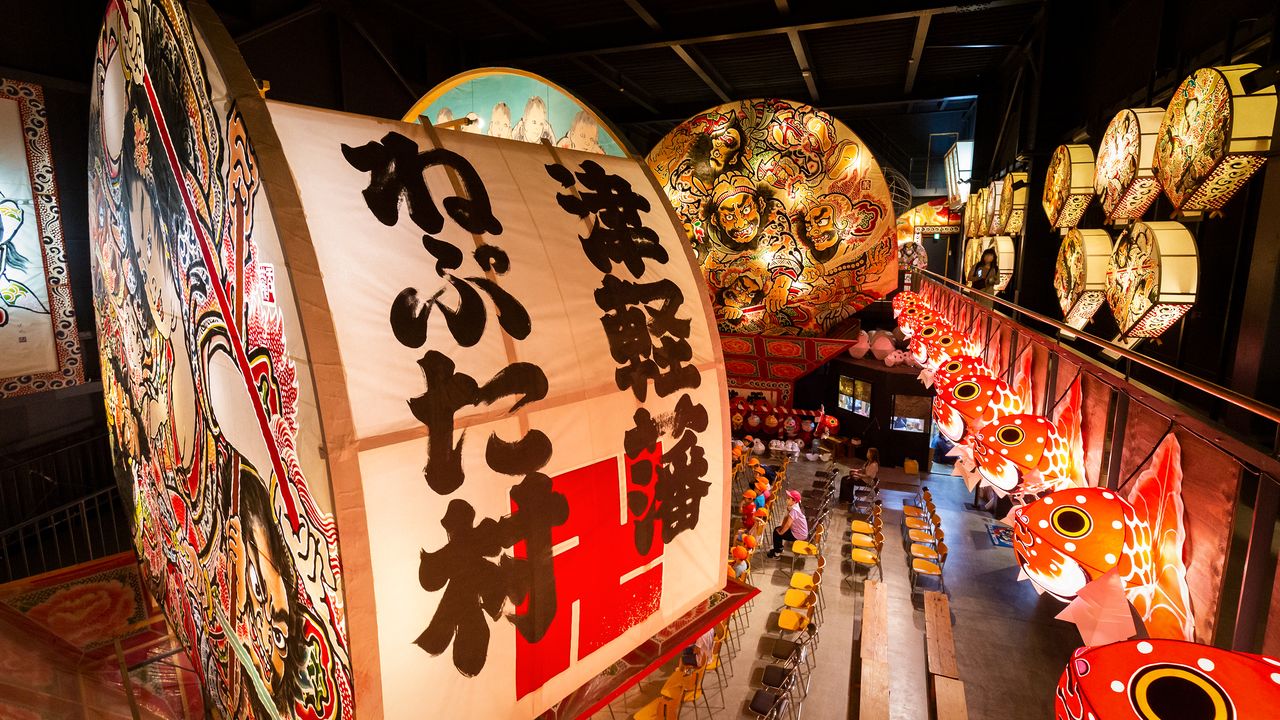 Travel Culture Sep 2, 2022
The Tsugaru-han Neputa Village in the city of Hirosaki in Aomori Prefecture presents the traditional culture and crafts of the Tsugaru region. Attractions at the tourist facility include large, intricately designed floats paraded through the streets during the Neputa Matsuri, a festival dating back 300 years, and lively performances of the Tsugaru-jamisen.

The Neputa Matsuri is the highlight of summer in the ancient castle town of Hirosaki in Aomori Prefecture. The festival, held the first week of August, dates from the Edo period (1603–1868). In the past, the popular event drew the interest of the heads of the Tsugaru domain, and today crowds from around Japan and further afield flock to the festival. The centerpiece of the Neputa are 10-meter-tall floats decorated with intricate hand-painted pictures and other designs.

The Neputa, not to be confused with the similarly named Nebuta Festival in the prefectural capital of Aomori, celebrated its 300th anniversary in 2022. The Tsugaru-han Neputa Village, a tourist facility next to Hirosaki Park, recreates the excitement of the event with displays of floats and shares the culture of Tsugaru through exhibits of the traditional crafts of the region. There are also performances of the distinctive sounding Tsugaru-jamisen and other attractions for visitors to enjoy. 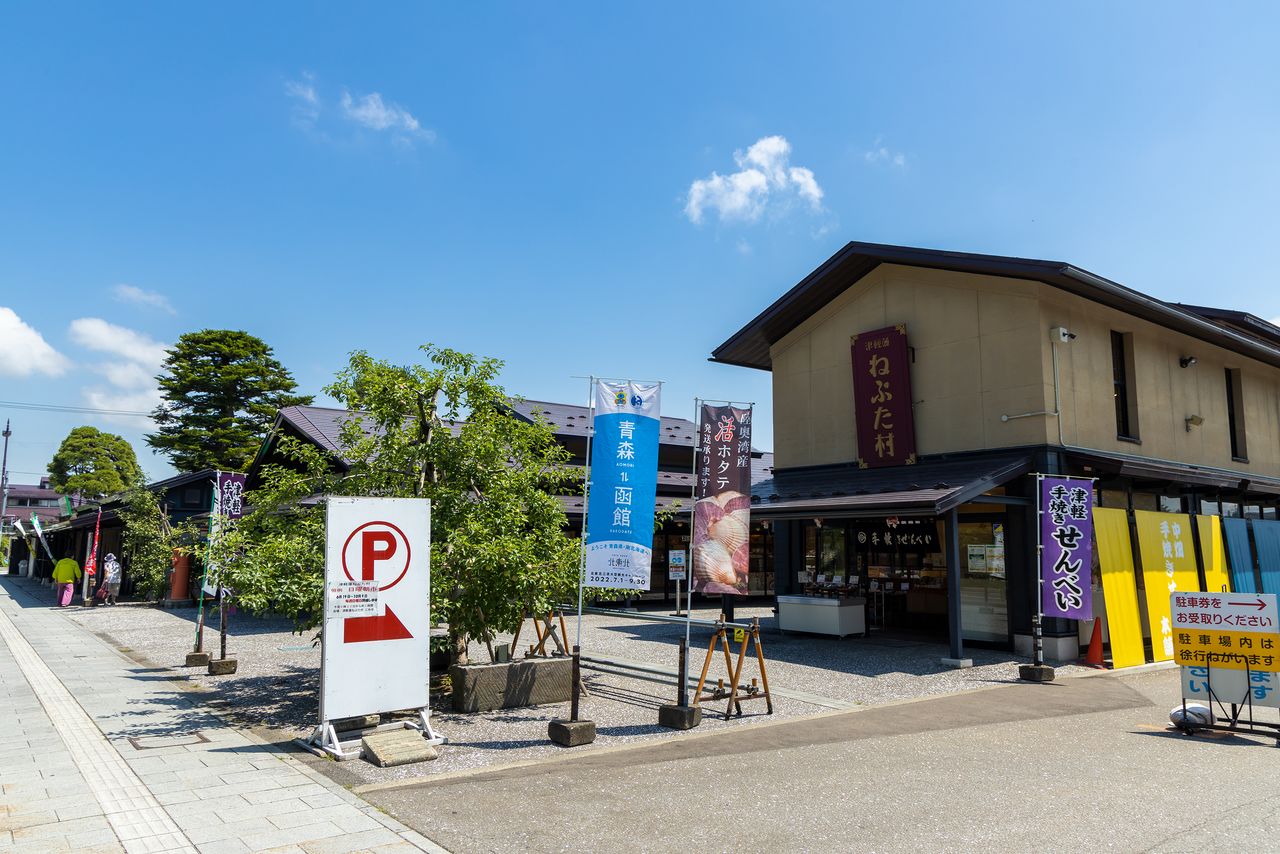 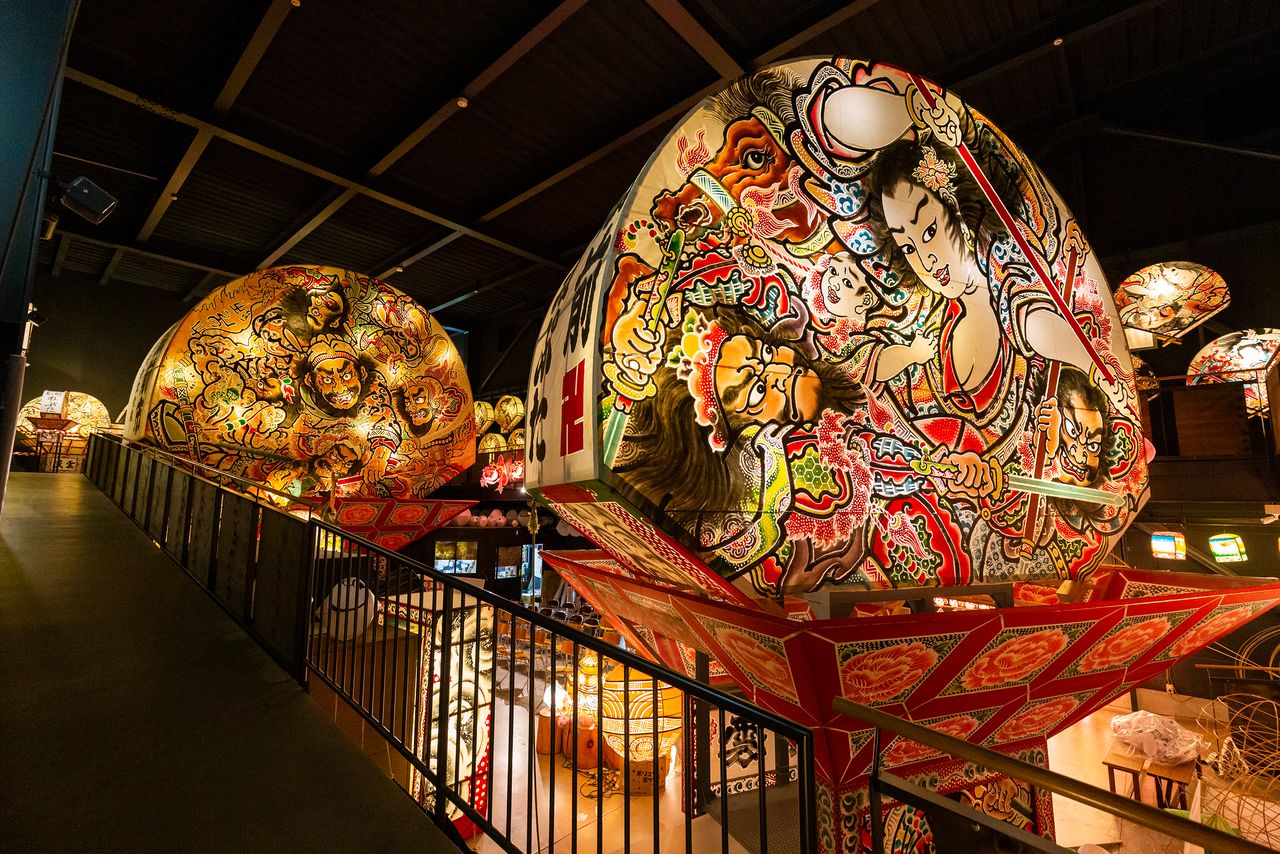 A display of floats from the Neputa Matsuri. The large structures are designed to look like a folding fan that is open.

Tours of the facility start in the Hirosaki Neputa Hall, where a presenter shares the history and characteristics of the festival, and visitors are treated to a performance of the hayashi music accompanying floats that feature bamboo flutes and taiko.

The origins of the Neputa and its cousin the Nebuta are uncertain, although the festivals are thought to be rooted in the Tanabata tradition of tōrō nagashi in which lanterns are set afloat on rivers and other bodies of water to celebrate the star festival. They are also linked to a similar ancient practice called nemuri nagashi historically observed in the Tōhoku region for “sweeping away drowsiness” that befalls farmers during the sweltering summer months. The custom was considered of particular importance on the northern tip of Honshū, with its short growing season.

The festivals over time developed distinct regional characteristics, one of the most obvious being their names. Both Neputa and Nebuta are thought to be corruptions of nemuta, meaning drowsiness. However, the intonation of residents of Hirosaki, Goshogawara, and other areas of Tsugaru’s interior is said to have transformed the word into the soft-sounding Neputa, whereas the lively dialect spoken in the fishing communities along the coast where the city of Aomori is resulted in Nebuta. 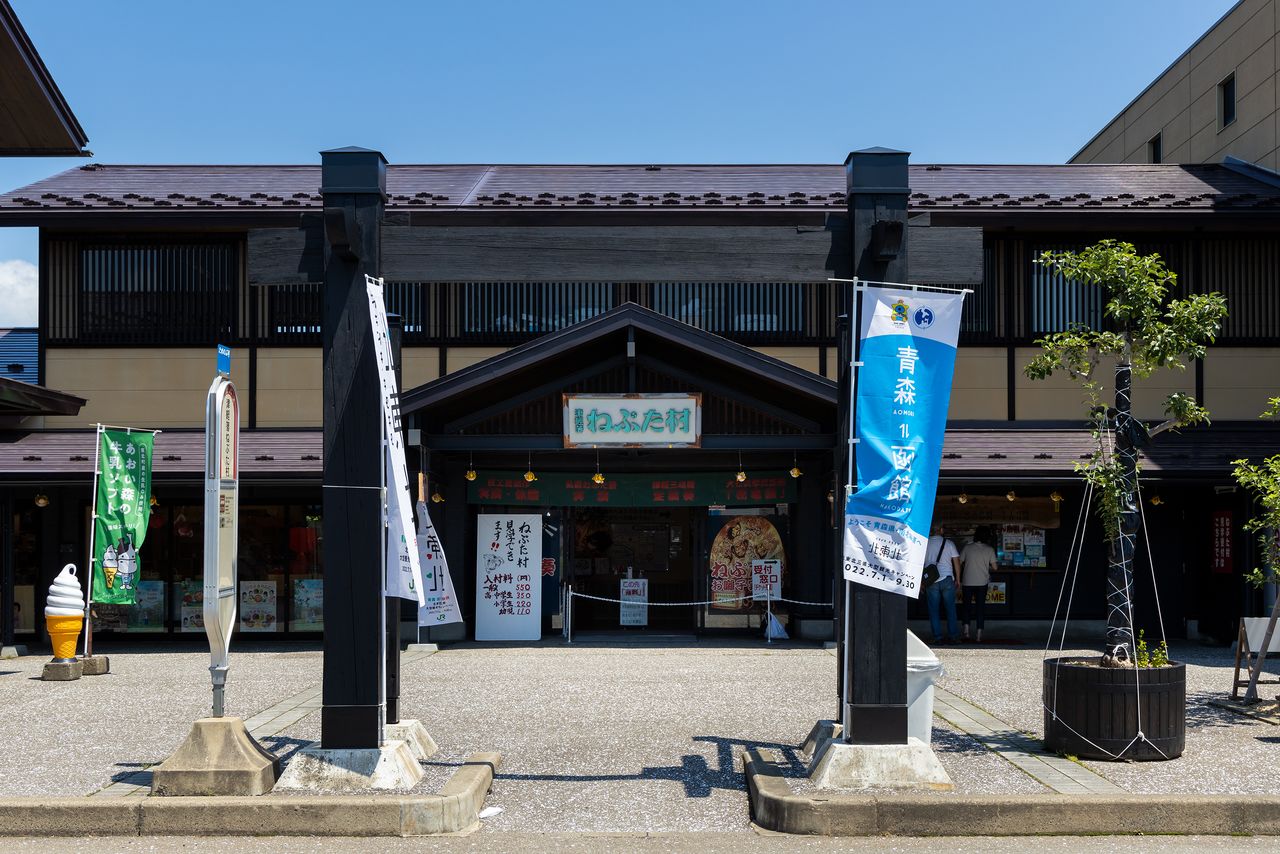 The entrance of the Hirosaki Neputa Hall. 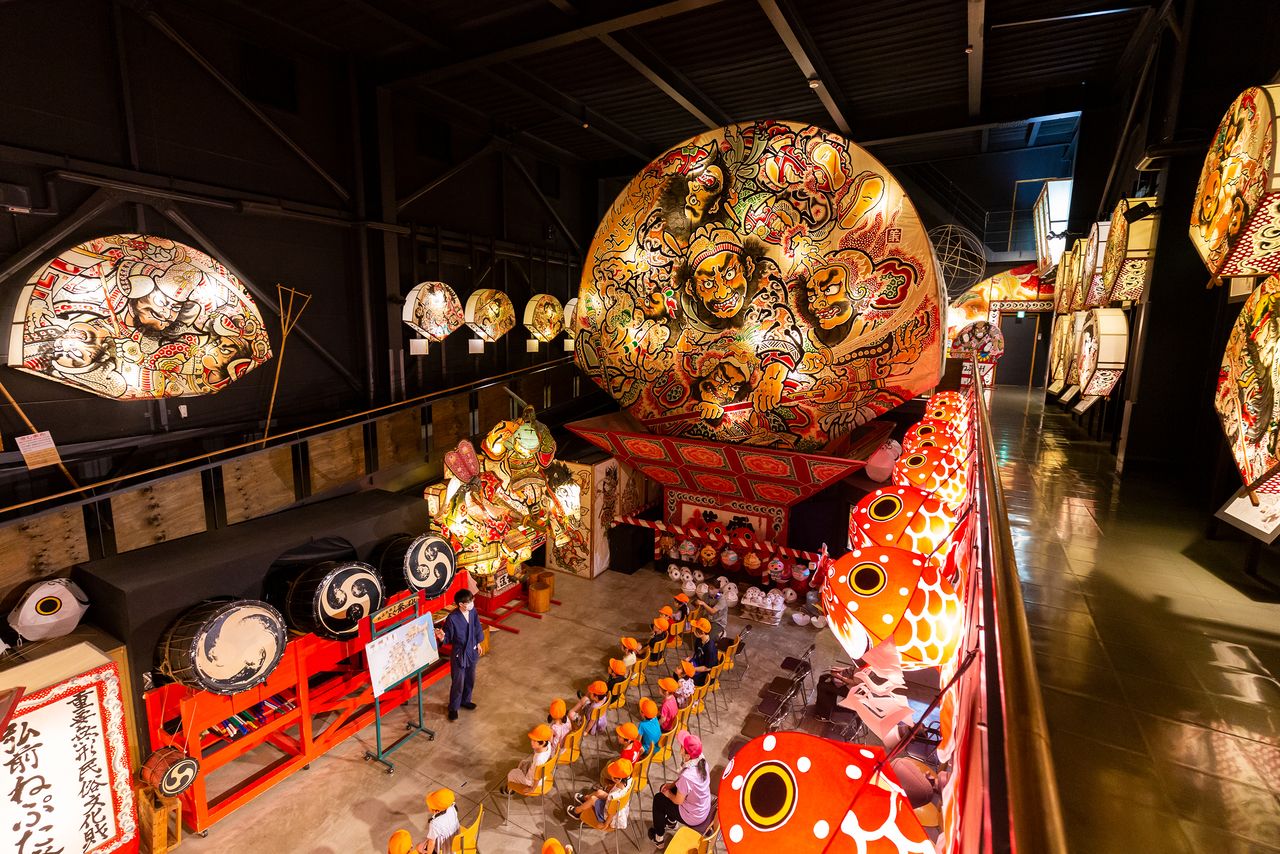 Floats on display inside the Hirosaki Neputa Hall. Visitors can listen to a brief lecture on the history and characteristics of the festival while enjoying the intricate designs of the structures.

The floats are the main draw of the two festivals, and here too there are obvious regional distinctions. Simple, square-shaped Tanabata lanterns common early on gradually gave way to more elaborate designs, and by the latter part of the Edo period, massive doll-like floats called ningyō-nebuta or kumi-neputa had become the norm. These were followed by fan-shaped ōgi-neputa that emerged during the middle of the Meiji era (1868–1912). The city of Aomori has become synonymous with the broad ningyō-nebuta, while Hirosaki embraced the ōgi-neputa. Goshogawara boasts a third type, the towering tachi-neputa.

Hirosaki’s ōgi-neputa have fronts decorated with elaborate pictures called kagami-e depicting famous characters or scenes from Chinese and Japanese lore. The backs of the floats feature portraits of beautiful women painted in the traditional style. The central sections of floats are designed to swivel, a spectacular feature that adds to the impact of neputa. 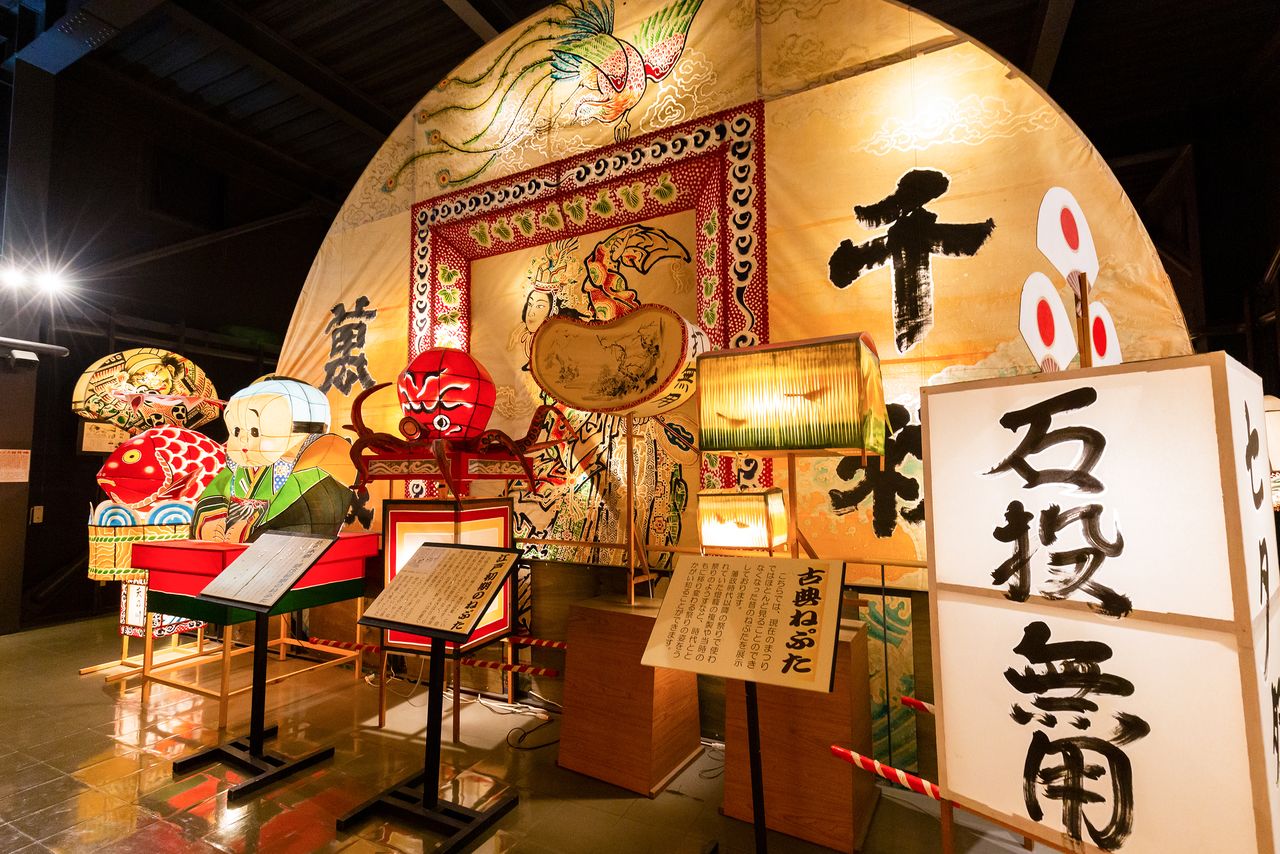 A display of different neputa lanterns from the early Edo period shows their development. 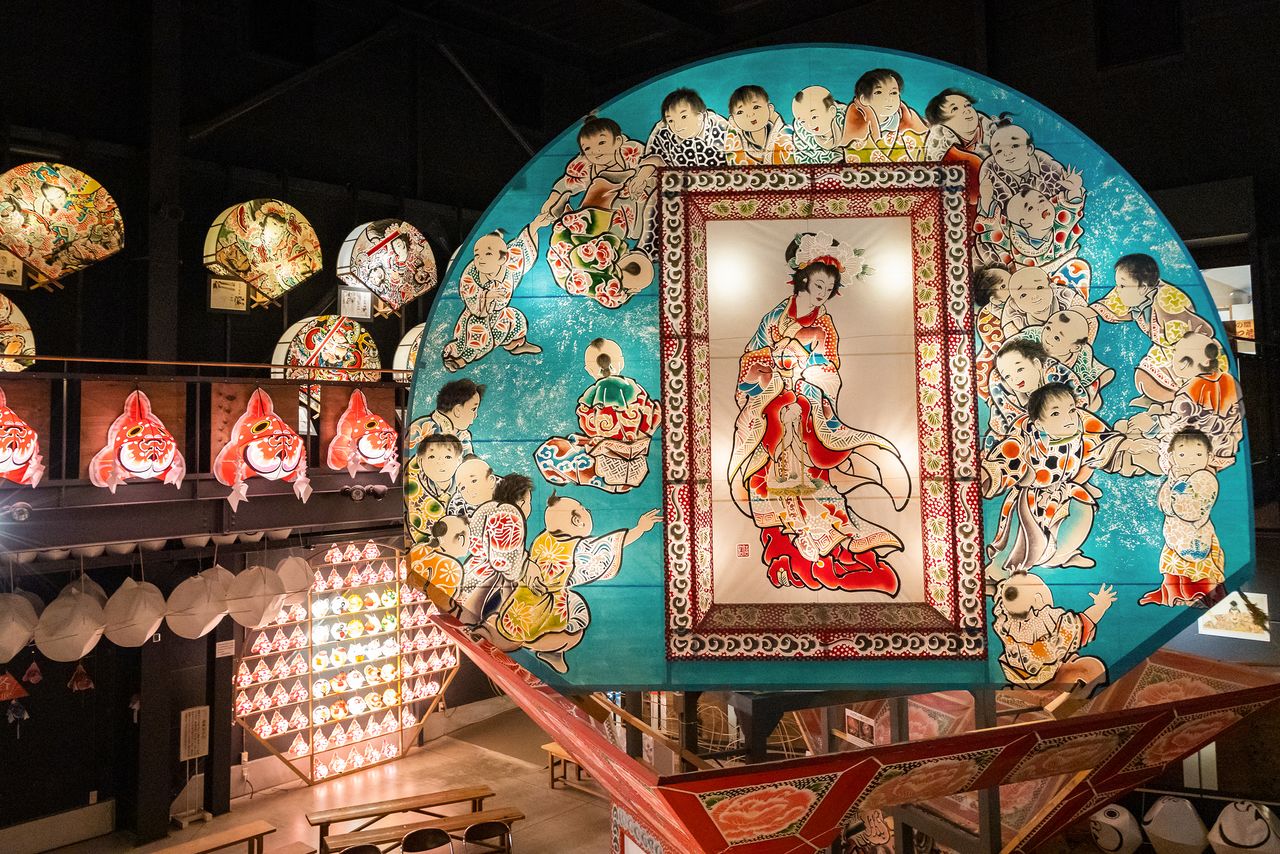 A float in mid turn reveals the okuri-e of a classical beauty painted on the reverse side. 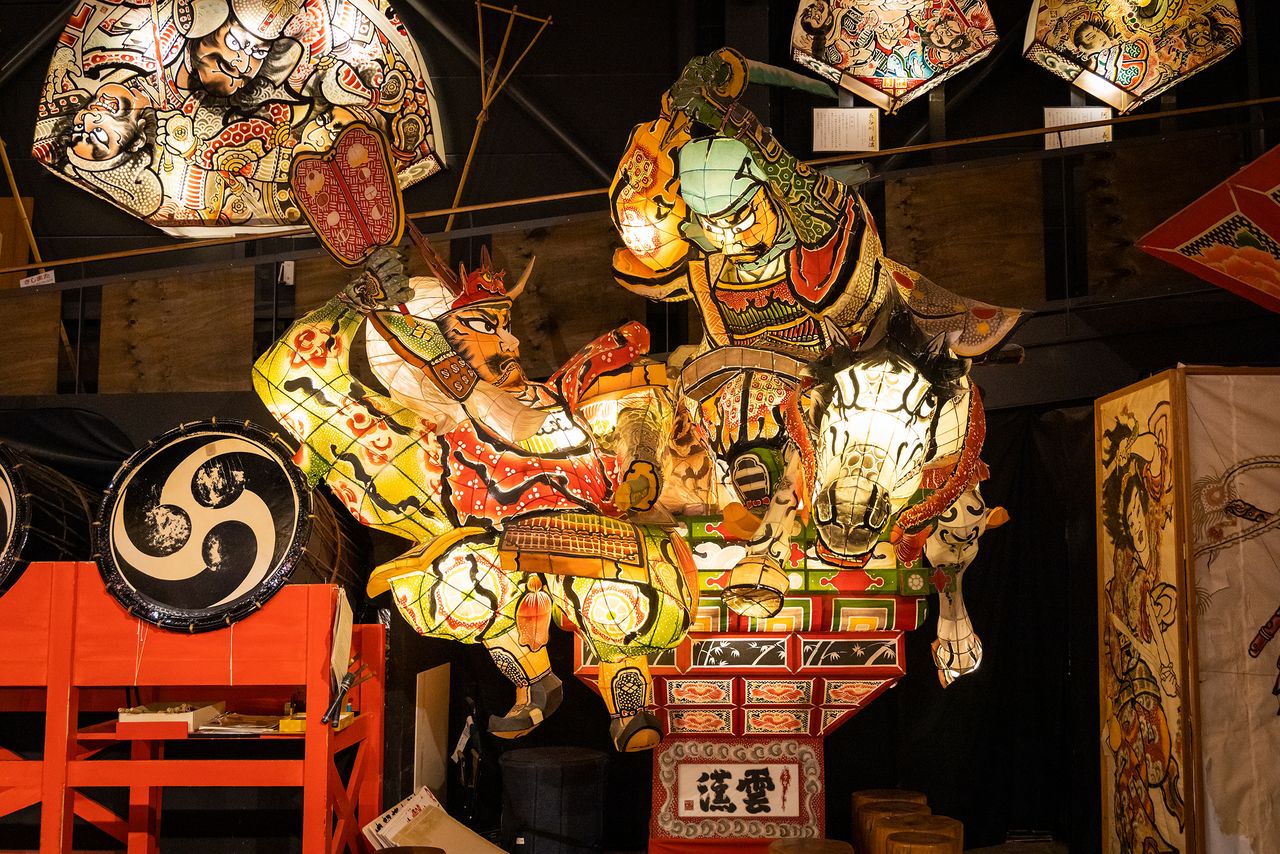 The ōgi-neputa took hold in Hirosaki in large part because their standard design makes them relatively inexpensive and easy to build. Compared to the more elaborate ningyō-nebuta characteristic of Aomori, which are crafted from the ground up by dedicated artisans and can take up to three months to construct at a cost of around ¥20 million—corporate and other sponsors typically foot the bill—building neputa is chiefly a volunteer endeavor. Groups like neighborhood associations provide much of the labor, frames are reused, and the images adorning floats are painted by part-time artisans rather than full-time professionals. This do-it-yourself approach has helped keep the local feel of the festival alive. 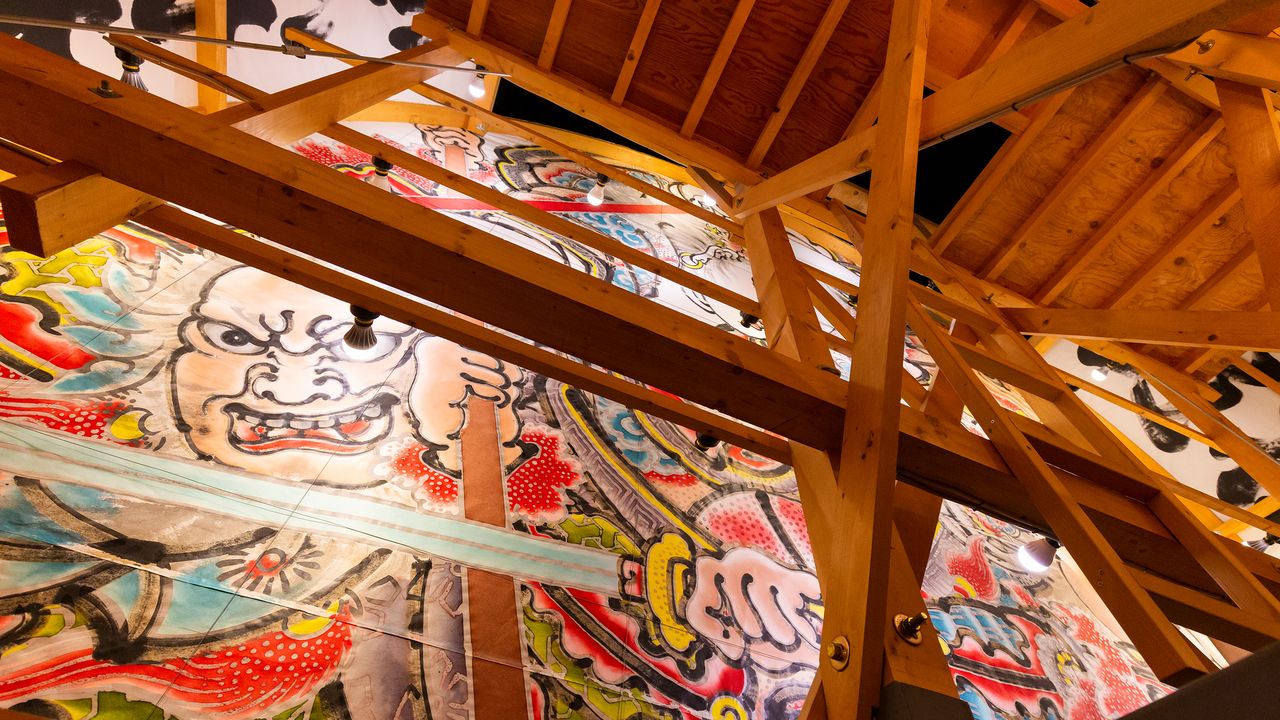 A float seen from the inside. The frame is made from a locally grown variety of native cypress. 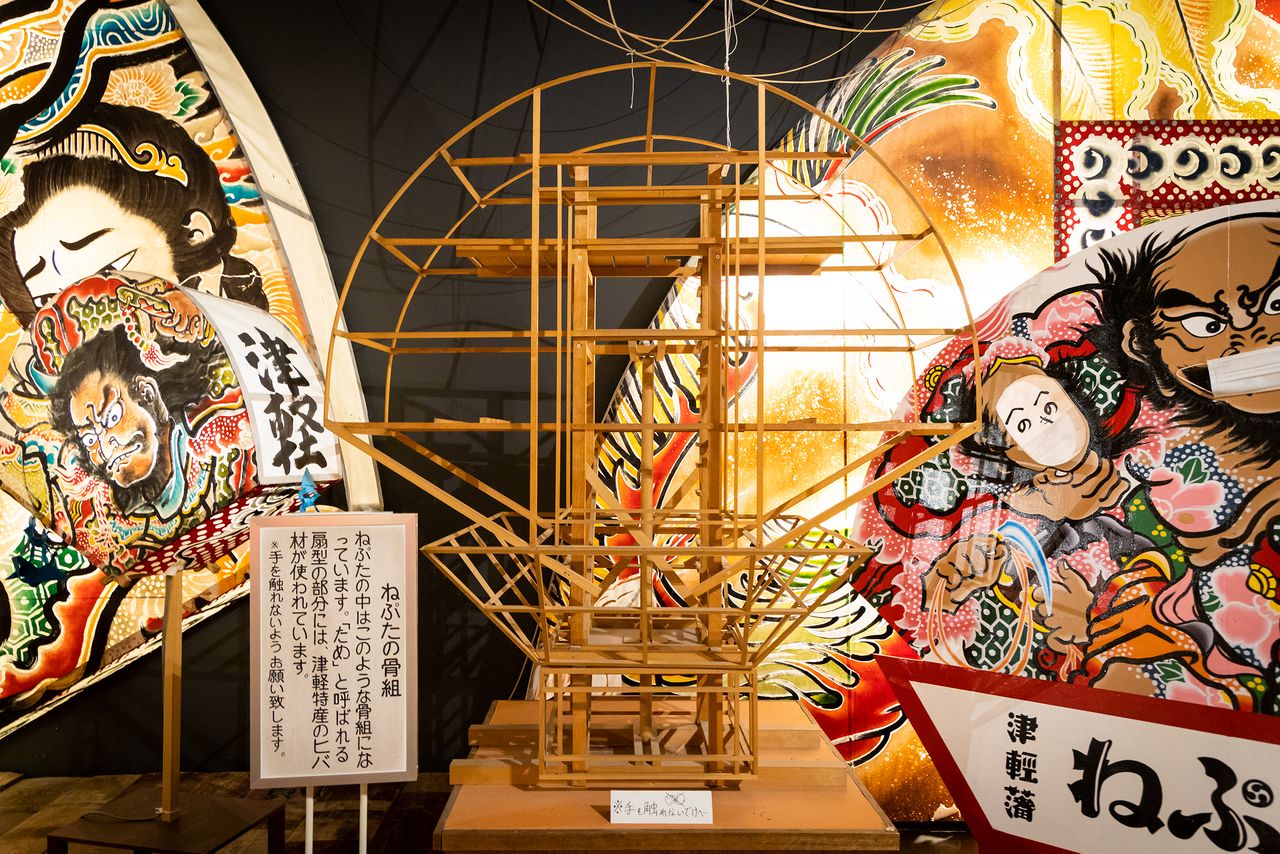 A model of the wooden frame of a float. 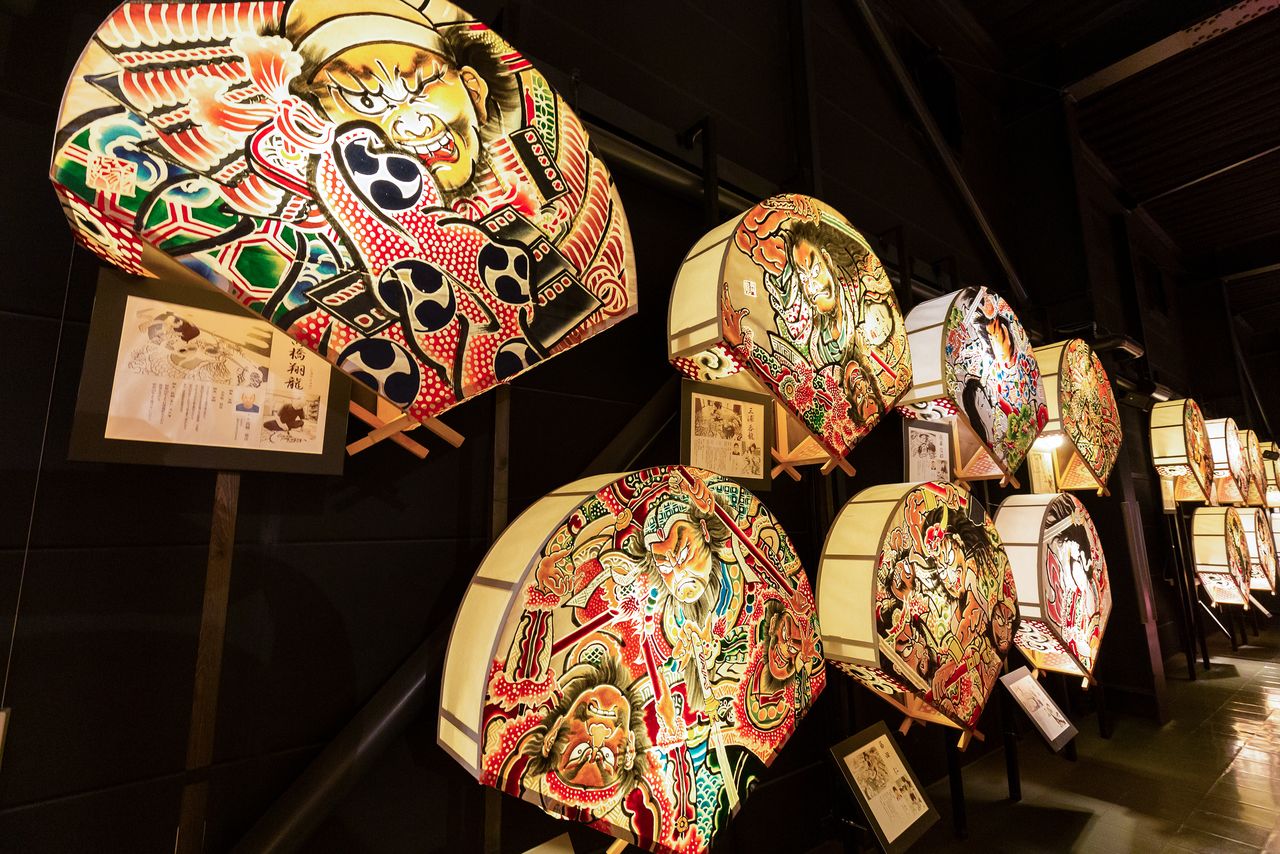 A display of pictures by different neputa-e artists. Work on the floats is seasonal, and most of the painters have regular day jobs.

After the Neputa Hall, visitors continue on to the Neputa Gallery, where there are exhibits introducing two other integral aspects of the festival: the chant of processioners and balloon-like paper goldfish called kingyo-neputa.

Participants at Aomori’s Nebuta repeatedly cry out “Rasse ra” as they jump and dance, whereas Hirosaki’s chant is the more subdued-sounding “Ya yado.” One theory is that the call derives from an old neputa song with the line ”Iya iya iya yo,” while another attributes it to the angry shouts of “Ya ya!” used to taunt an opponent during a fight. The Goshogawara Neputa has its own chant, “Yattemare,” that also has a goading ring, giving credence to the idea that the call was originally used to provoke rival groups as they towed neputa through the streets.

Kingyo-neputa are said to be modeled on the Tsugaru-nishiki, a variety of decorative carp treasured by the daimyō of Tsugaru. During the Edo period, heads of the domain hoped the fish would become an important trade item, but breeding attempts failed, and the variety eventually died out. The carp live on today as colorful lanterns that are carried by children. 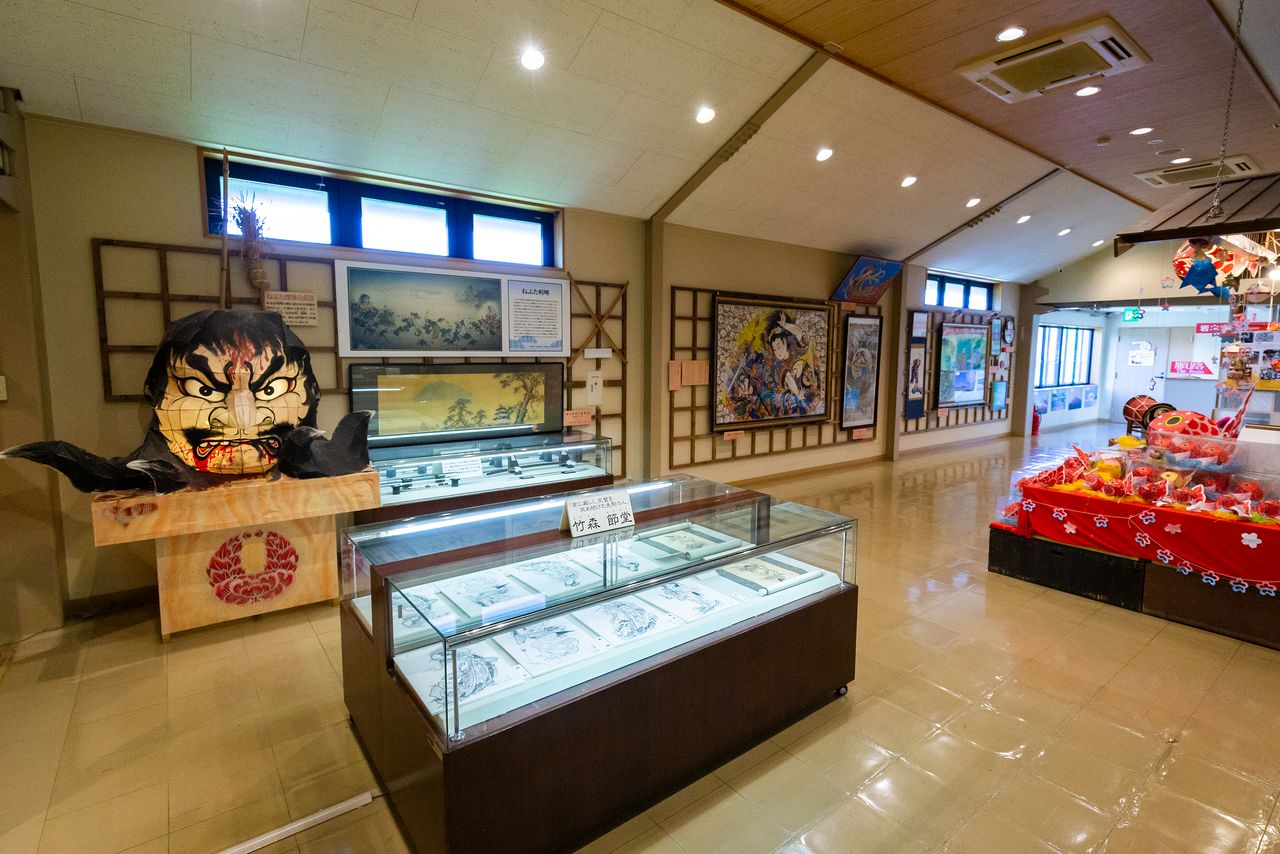 Drafts of neputa-e and other items are on display inside the Neputa Gallery. 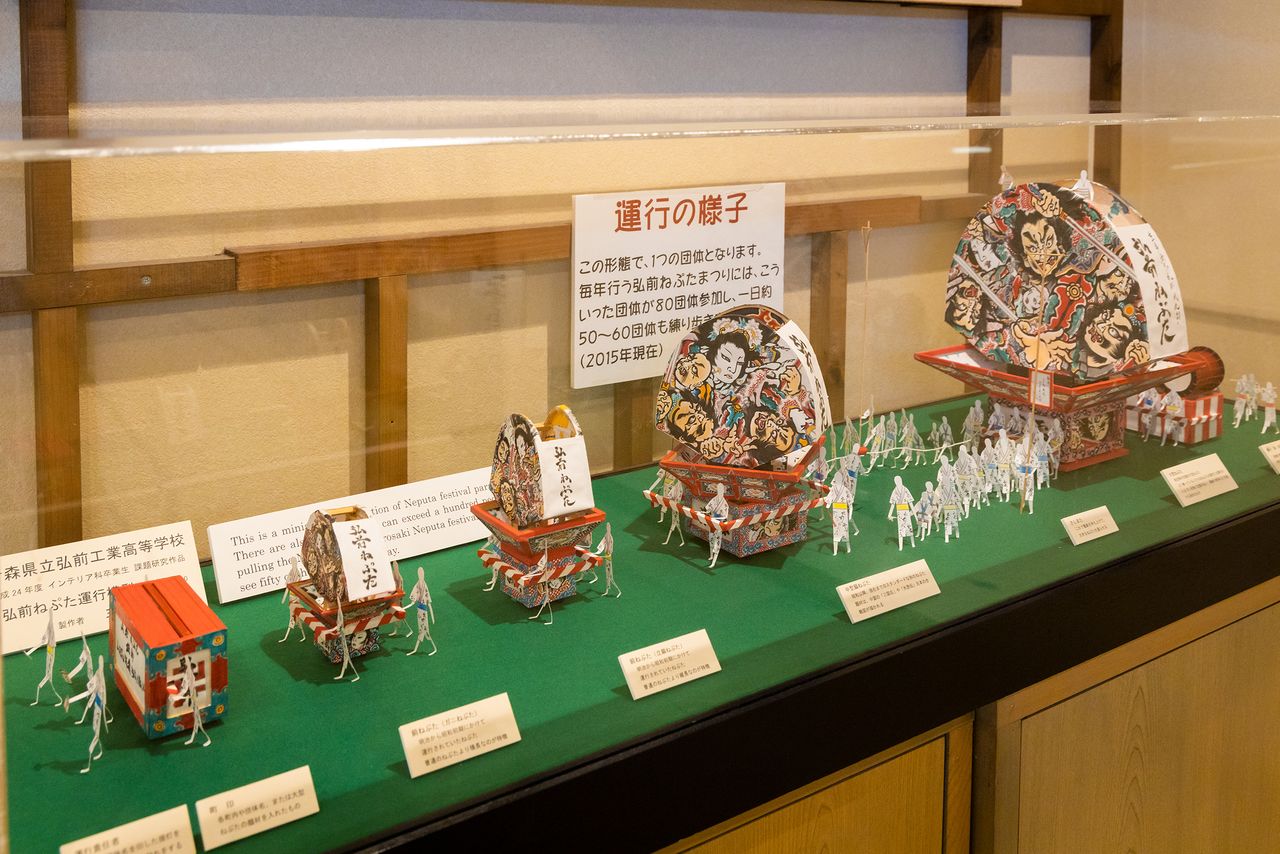 A diorama of a neputa procession. 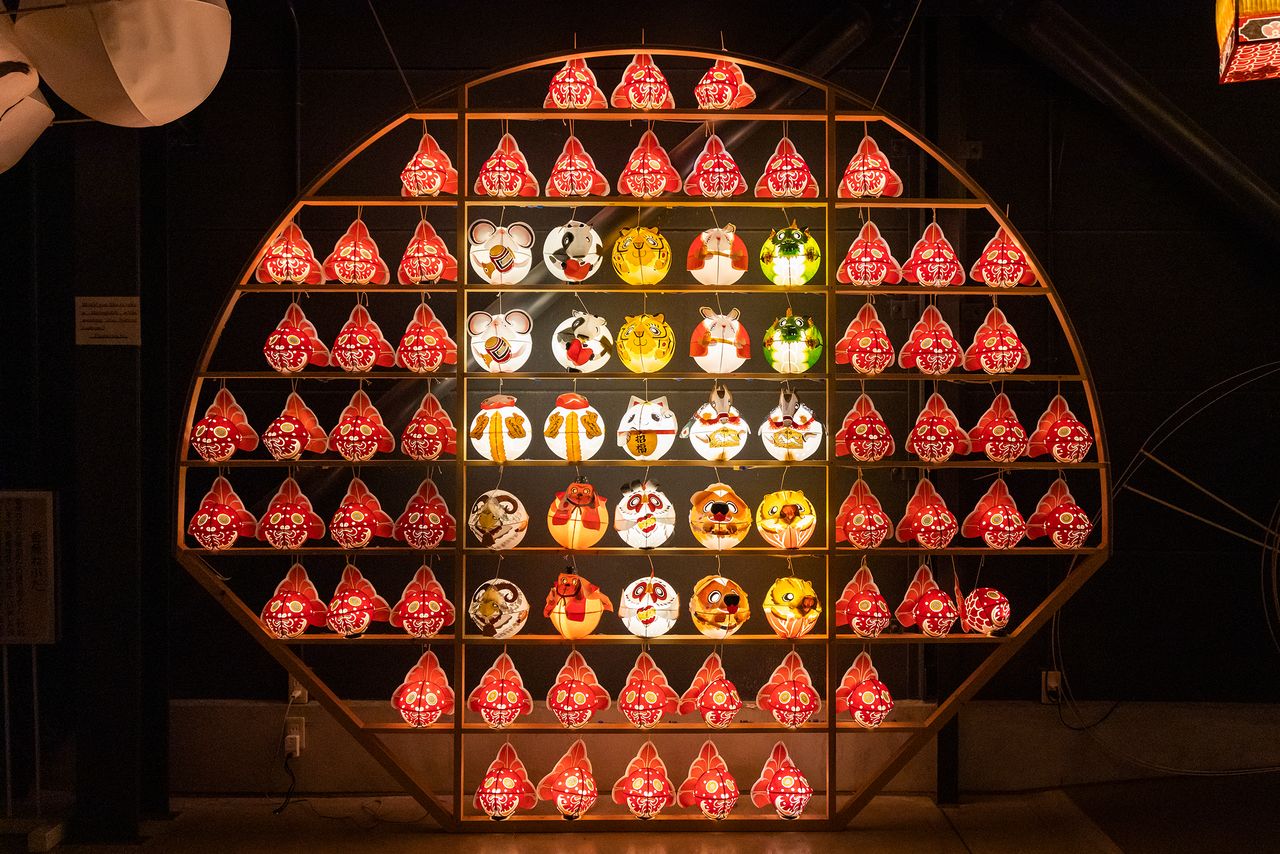 An array of kingyo-neputa. Along with goldfish are models based on eto, the 12 animals of the zodiac.

At the Tsugaru Craft Center, visitors can experience firsthand regional variations of traditional crafts like lacquerware, pottery, and embroidery. The adjacent Sangendō has displays on another regional hallmark, the Tsugaru-jamisen, and the Tsugaru-han Neputa Village offers daily performances of the iconic instrument. 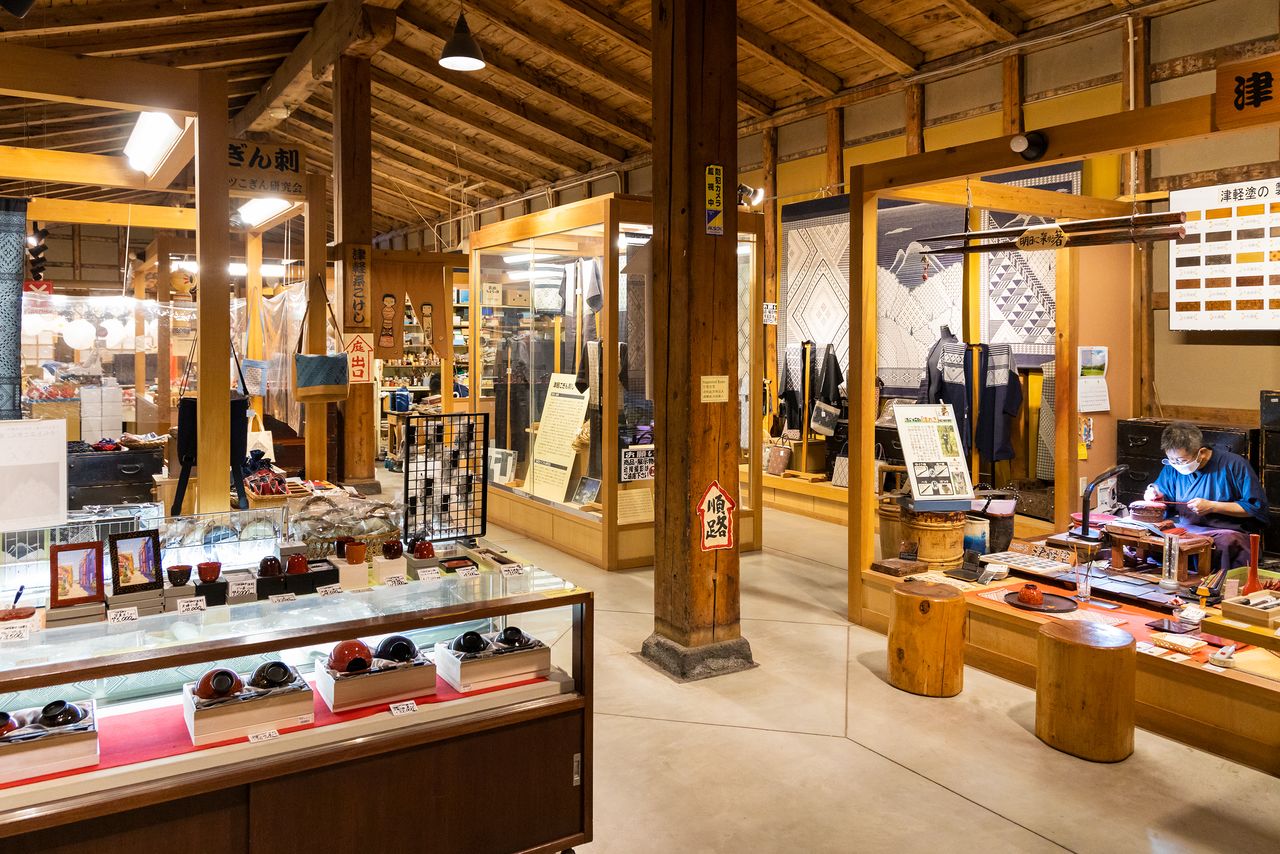 Traditional craft items on display at the Tsugaru Craft Center. 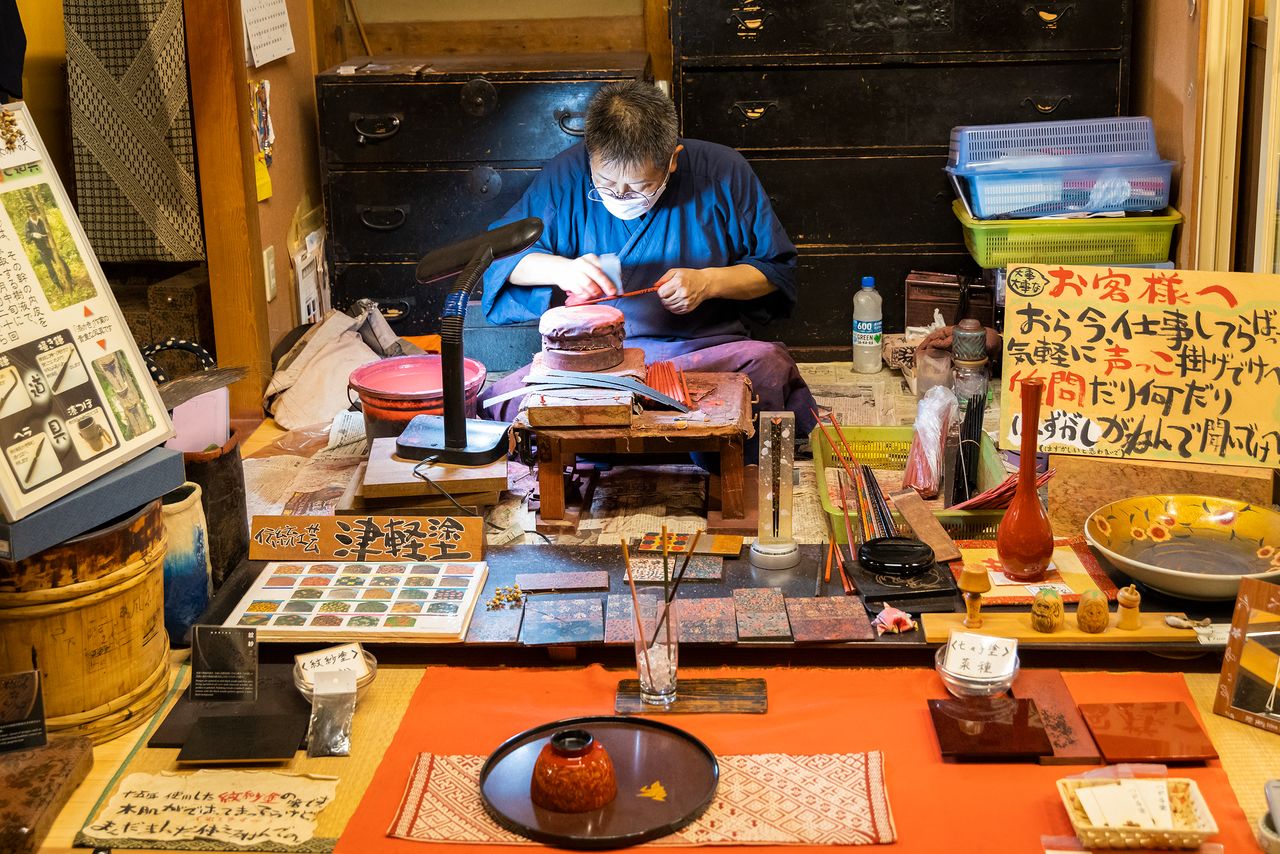 An artisan works on a piece of Tsugaru lacquerware. Visitors are welcome to ask questions. 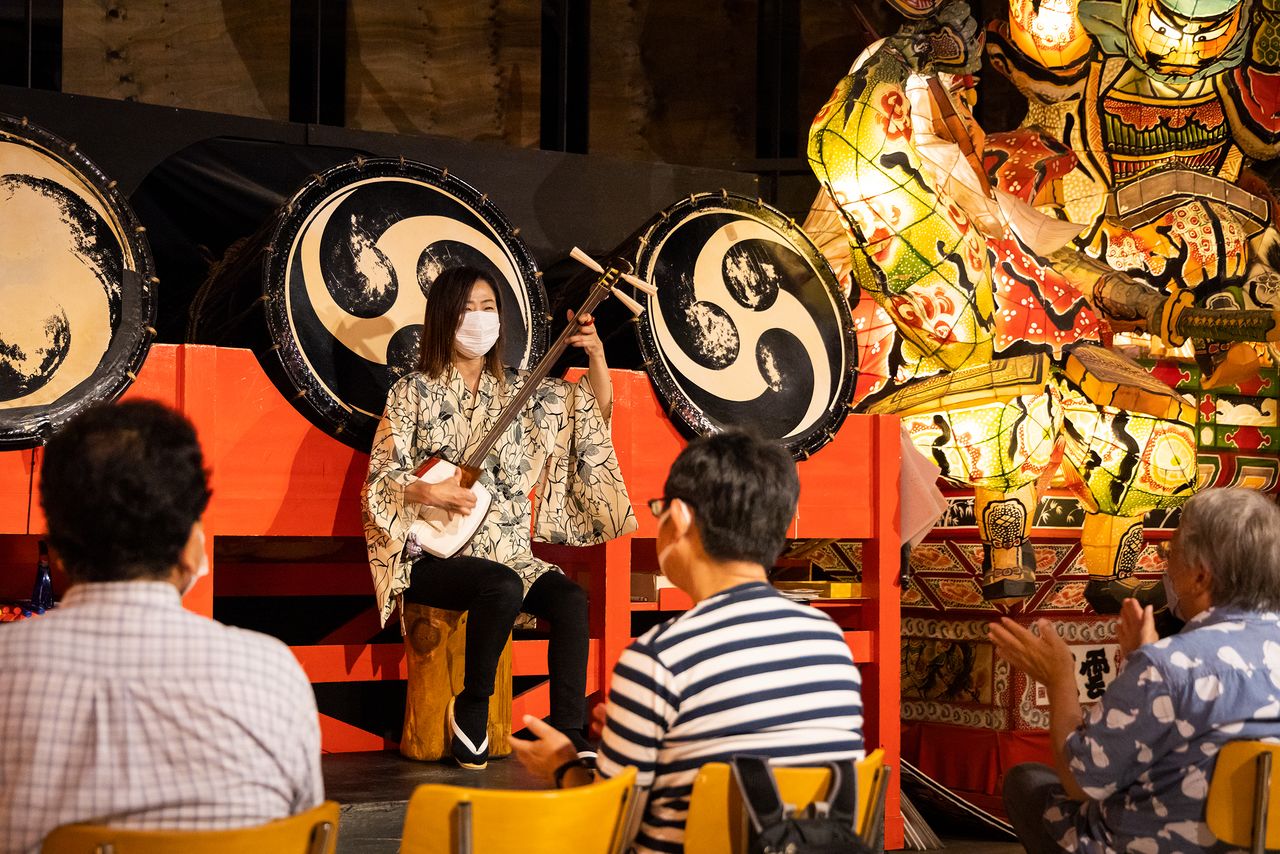 Yamada Sachimi, a two-time winner of the women’s division at the all-Japan Tsugaru-jamisen championship, performs for visitors.

The last stop on the tour is Yōkien, a Japanese garden that incorporates elements like Mount Iwaki and the hoary pines of adjacent Hirosaki Park into its design. After relaxing in the garden, visitors will want to stop by the well-stocked souvenir shop, which includes a branch of the Aomori Prefecture antenna shop, or try local cuisine at the restaurant Umaiya. 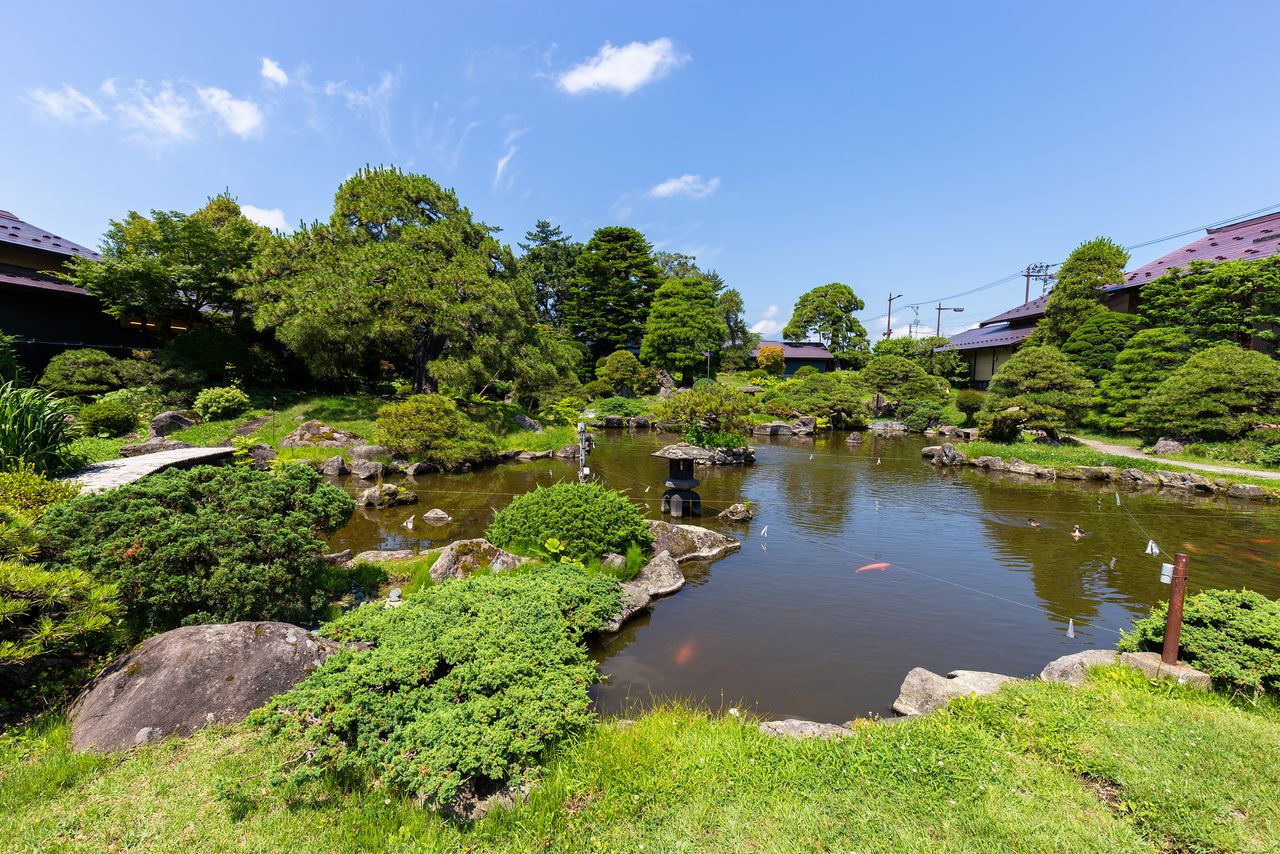 The Yōkien is designed in the Ōishi-bugaku style that is distinct to the Tsugaru region. 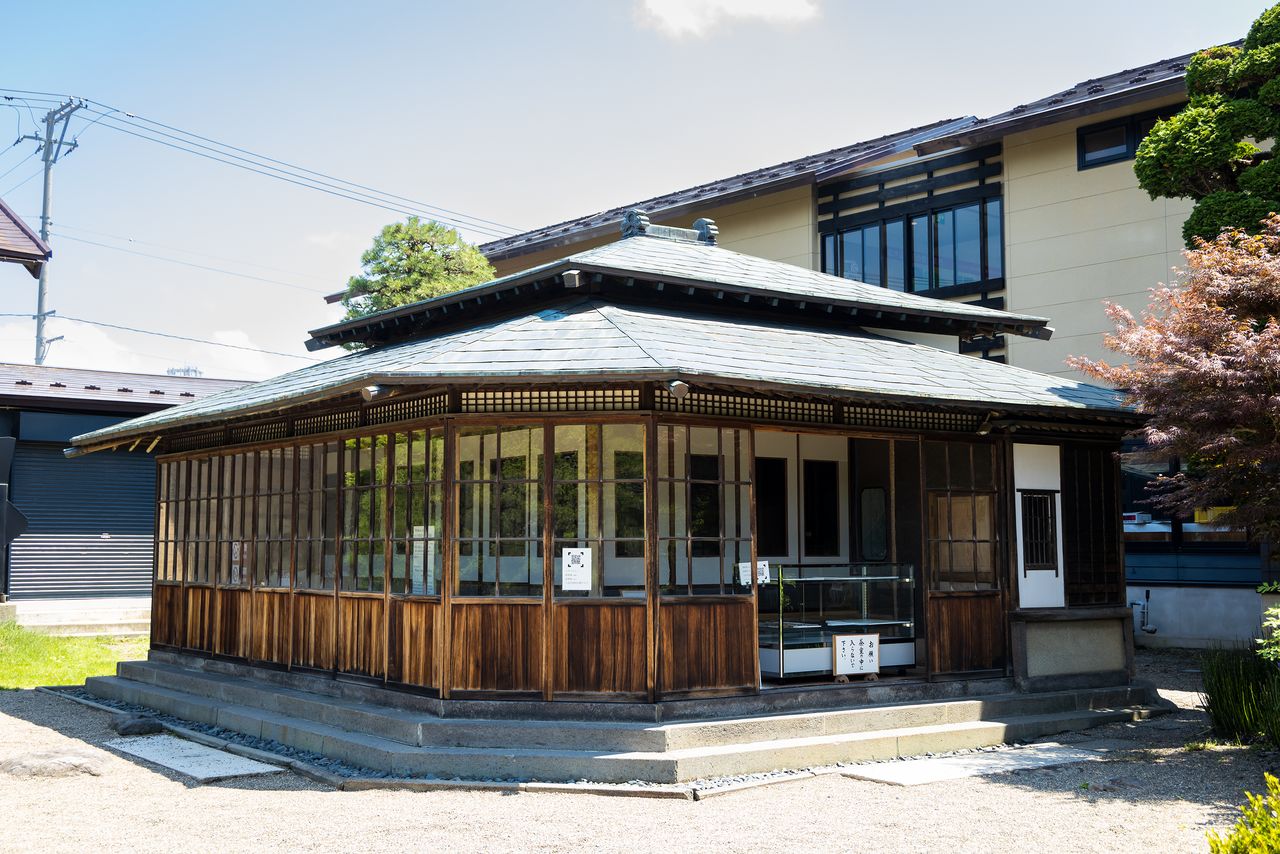 The teahouse Yōki-an on the grounds of the Japanese garden.