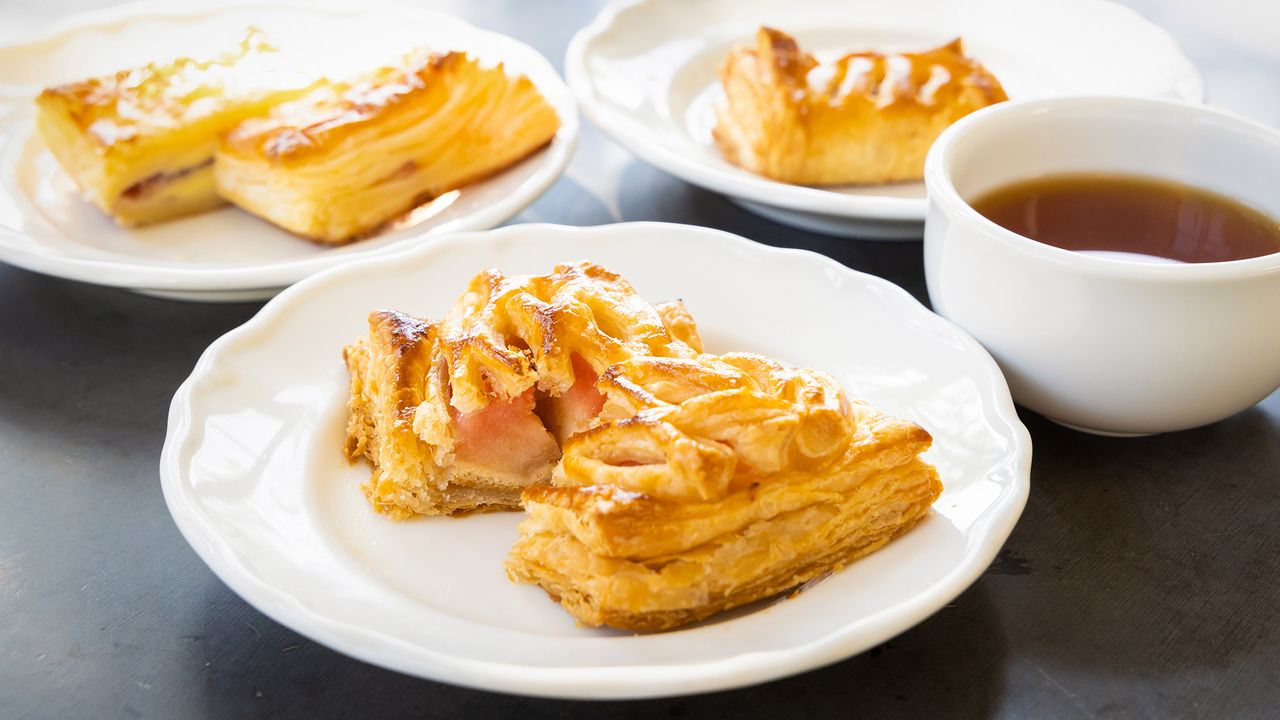 Travel Food and Drink Sep 16, 2022
Hirosaki is gaining attention as a destination for sweets lovers, particularly young people in search of tasty apple pies. Visitors to the historic town can be found clutching the Hirosaki Apple Pie Guide Map, a pamphlet compiled by the city’s sightseeing information bureau that describes the luscious apple pies available around the city.

Aomori Prefecture is Japan’s top apple producer. In 2021, farmers harvested nearly 420,000 tons of the fruit, equal to 60% of Japan’s annual production. Aomori’s climate, with its cool summers and rapid temperature drops in the fall, is perfect for producing sweet, juicy fruit that have just a hint of tartness. The western city of Hirosaki is the prefecture’s leading producer by volume.

A former castle town of the ruling Tsugaru clan, Hirosaki is full of interesting historic sights. But the city has started to garner attention for its culinary attractions as well, specifically apple pie. Bright red banners identify places where apple-based sweets like traditional round pies and smaller, hand-held treats, for which the city is famous, can be found. These delights are widely available at pastry shops, cafés, and even traditional Japanese-style wagashi confectioners. 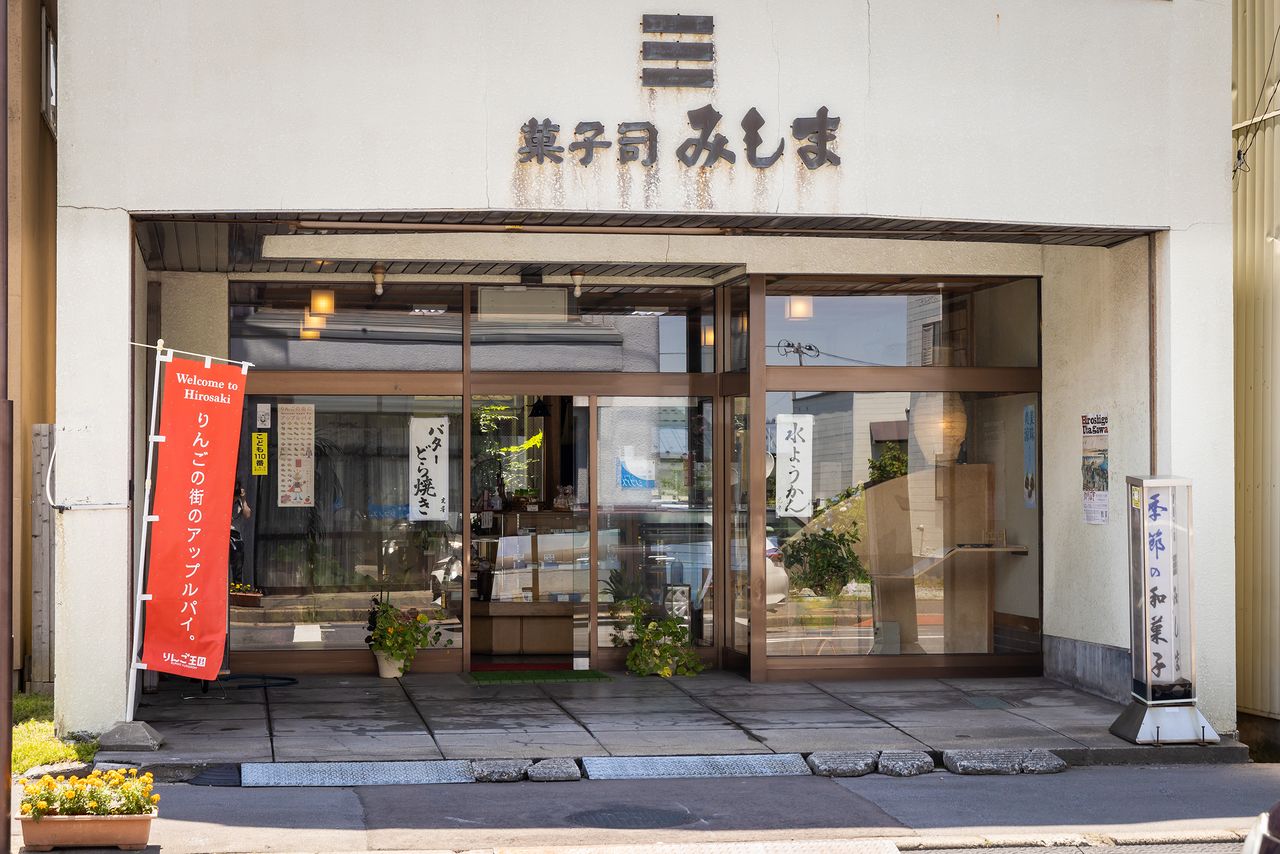 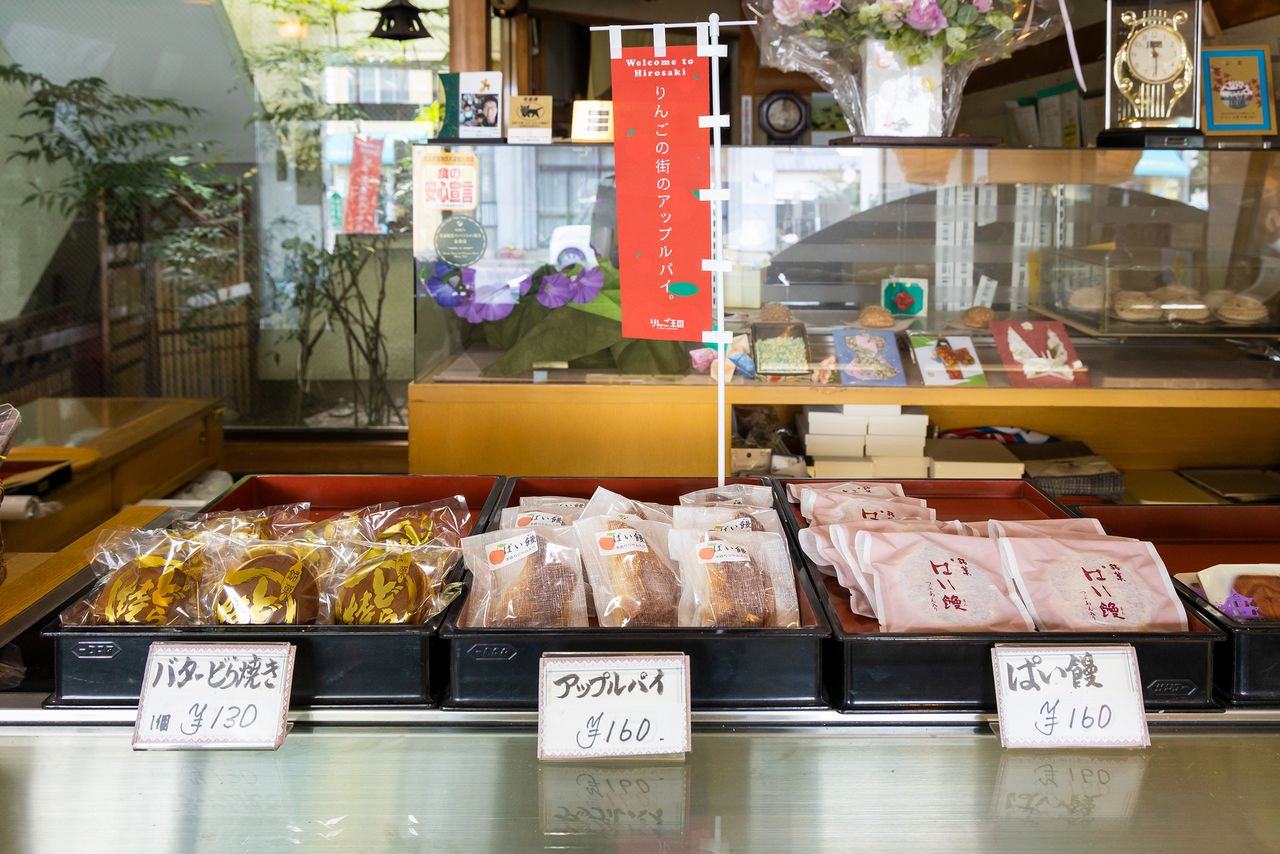 Kashitsukasa Mishima has been selling its apple pies alongside traditional confectionery like dorayaki for nearly 50 years. 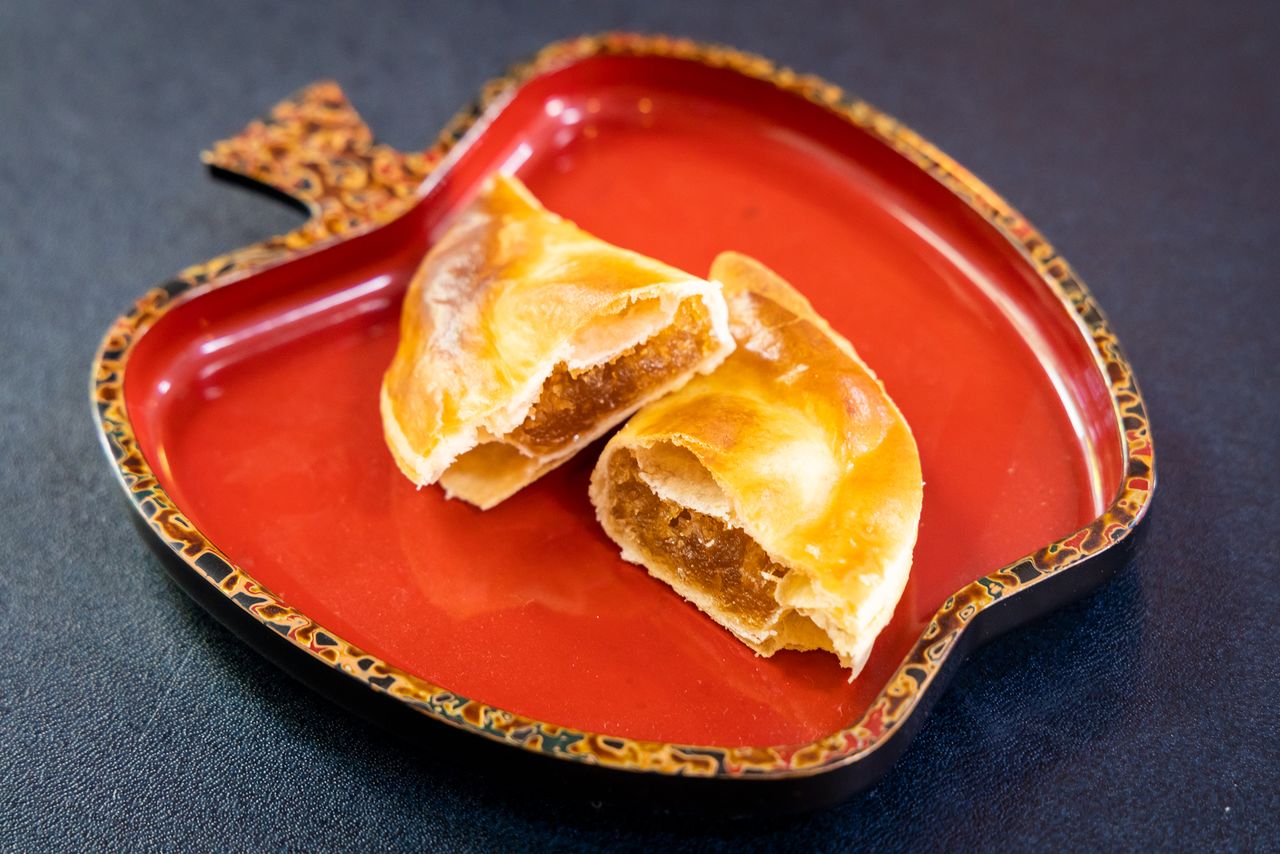 The filling is house-made jam using only the Kōgyoku variety of apples, also known as a Jonathan. The confection is popular among visitors for its fluffy pastry and gentle sweetness.

Helping visitors navigate the city’s many vendors of sweets is the Hirosaki Apple Pie Guide Map. Available for free at train stations and the tourist information center, the pamphlet lists 43 varieties of apple pies made with Aomori apples that are sold in Hirosaki. It also describes their different flavors and what makes each one of them special. First published in 2010, the map has become a popular item for visitors to the city, especially young people, and has helped make the quest for apple pies a staple of Aomori tourism. 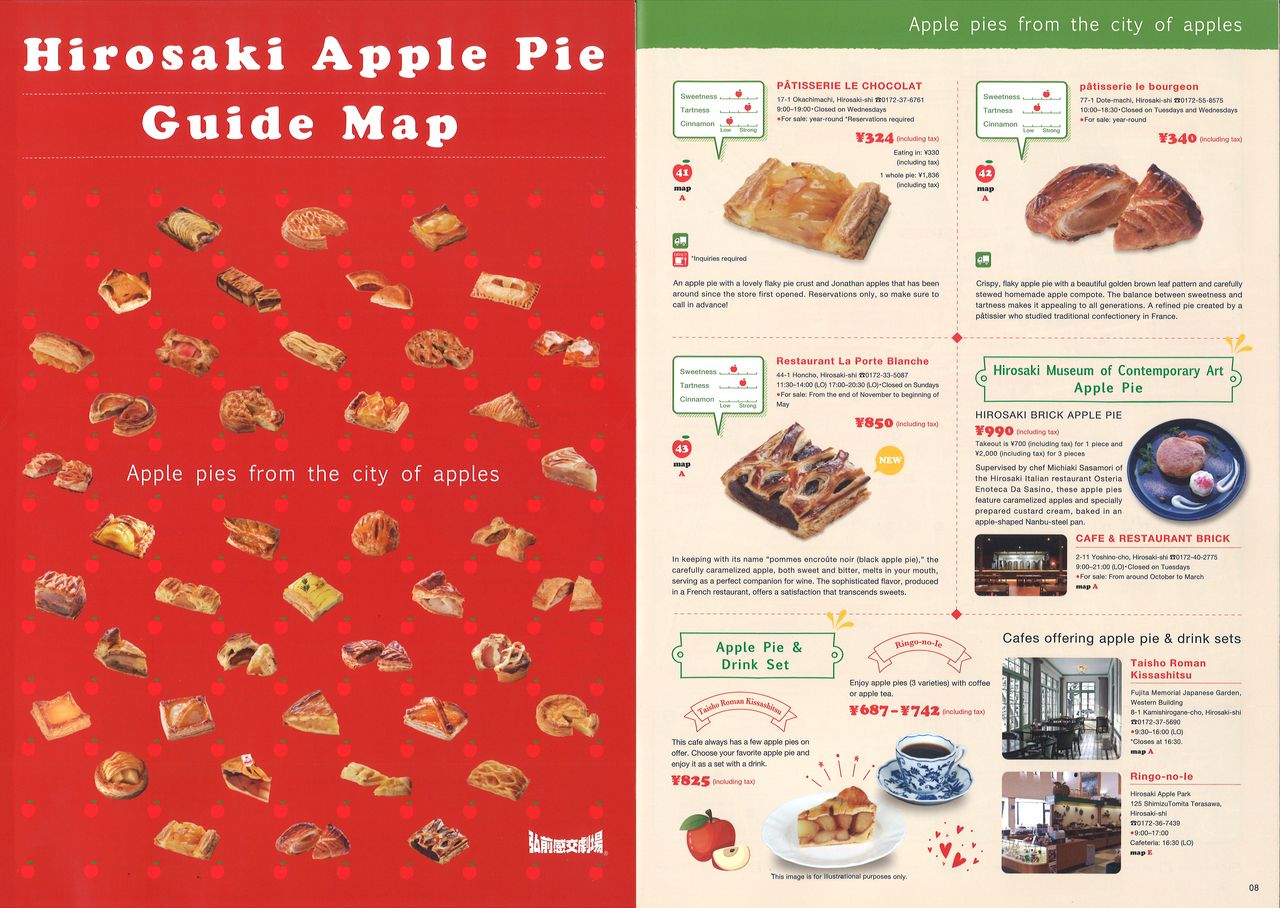 The Hirosaki Apple Pie Guide Map is a must for any sweet-toothed visitor to the city.

Nomura Izumi, who works at the Hirosaki’s Sightseeing Information Center, is in charge of periodically revising the Apple Pie Guide Map’s contents and coming up with ideas for associated merchandise.

The map was launched in 2010 in response to tourist inquiries. “Visitors often asked where to find apple pies or where the best shops were,” Nomura explains. “This prompted staff to take a proper survey of what the city offered. The first edition of the guide map was based on the information they collected.” 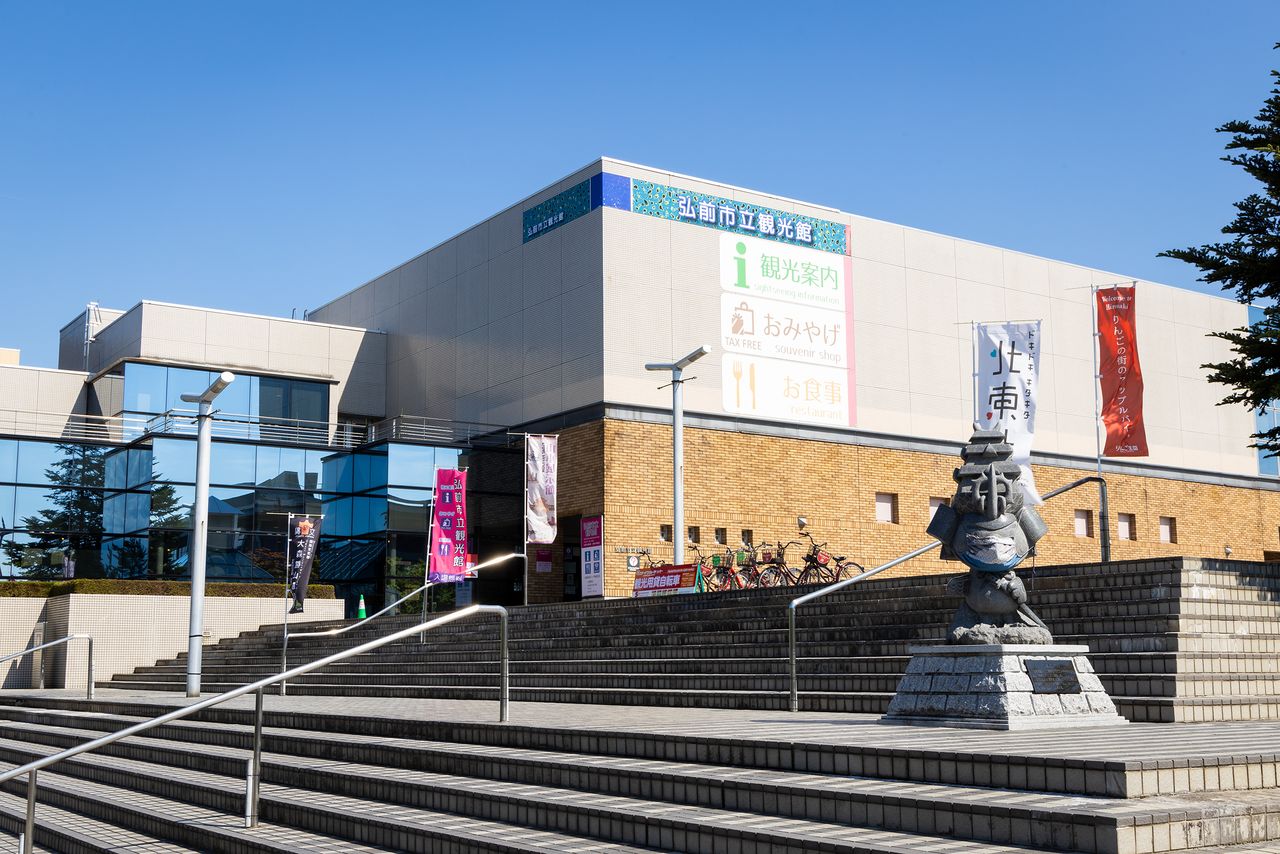 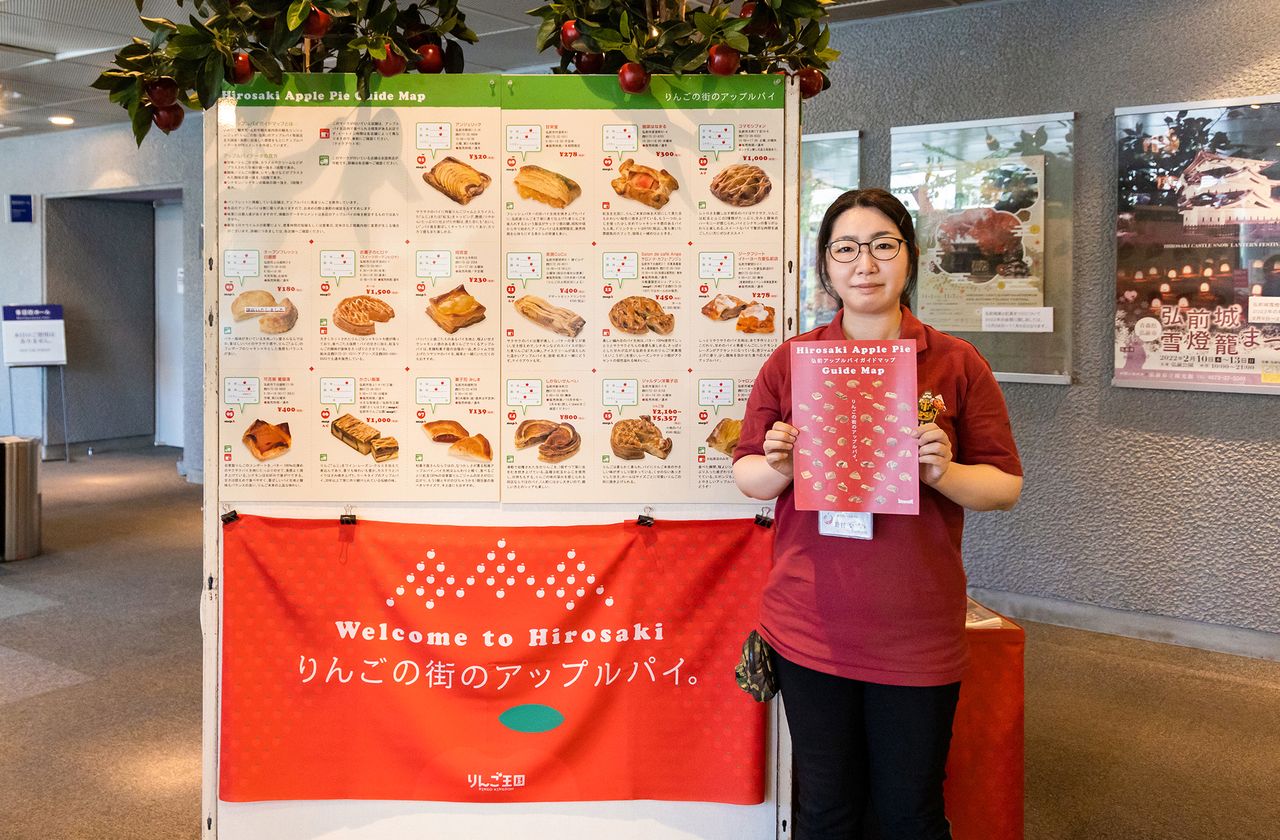 Later editions have built on this early version. Nomura phones pastry shops, cafés, and Japanese-style confectioners around town in search of new information. She has discovered that there are far more places selling apple pies than she had initially anticipated. She was particularly surprised at the number of wagashi shops offering apple pies, which are considered Western-style desserts. Inquiring at one vendor, she was admonished for her ignorance by a worker who huffily declared, “We’ve been selling apple pies for decades.”

Nomura and other staff at the sightseeing information center continue to uncover a wealth of apple pie riches in their community. Thanks to their work, Hirosaki’s profusion of apple pie creations, including previously hidden treasures, have taken center stage, with wagashi shops and even senbei rice cracker makers hopping on the bandwagon. 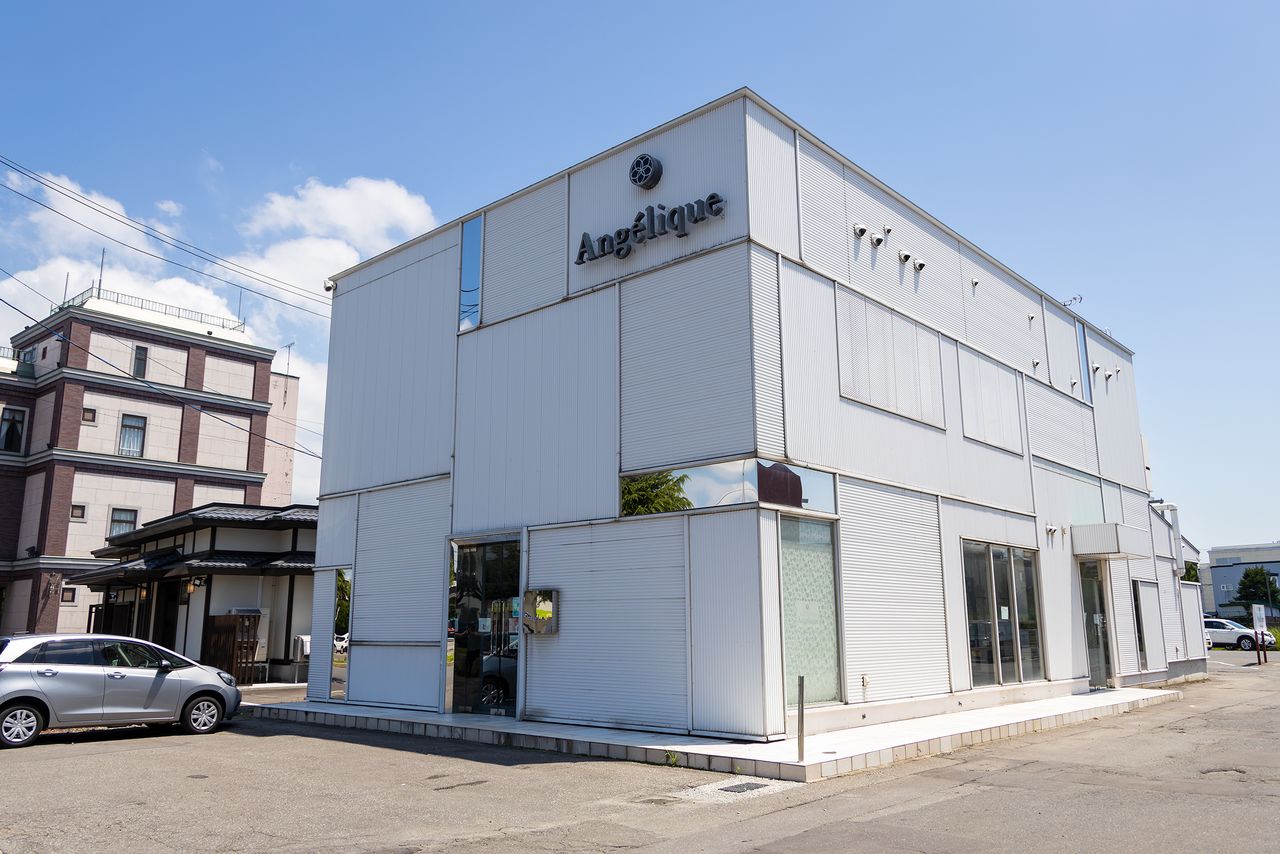 Angelique is one of Hirosaki’s most sought out purveyors of apple pastries. 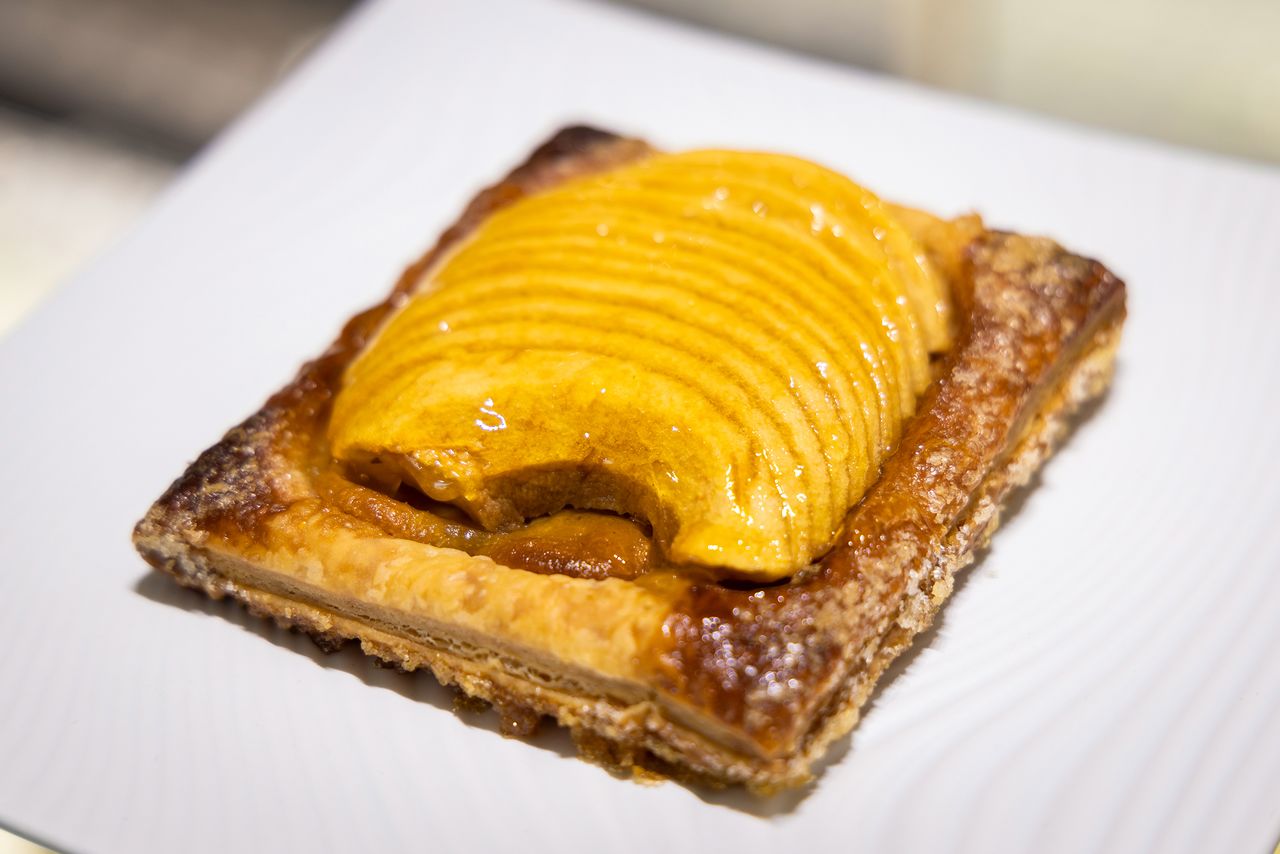 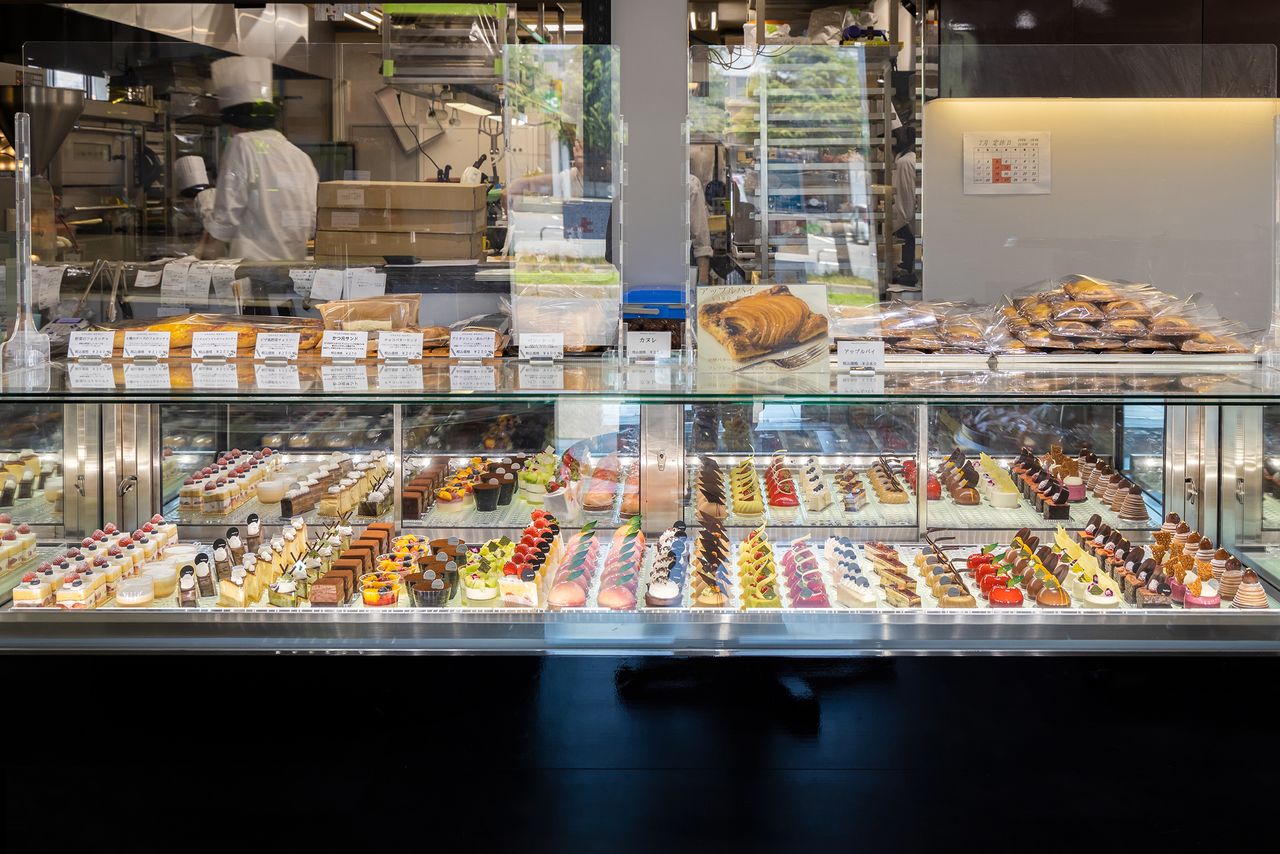 Although freshly picked apples are only available for a short time, apple pies are a year-round staple, making them a perfect tourist draw. To prepare the map, Sightseeing Information Center staff organized a tasting session where they compared the flavors and textures of 34 different pies an noted their special features.

Nomura was employed elsewhere when the first map was released in 2010, but she recalls being impressed when she received a copy. “I liked the cute design,” she recalls. “I had no idea so many shops in the city sold apple pies.” With map in hand, she started going down the list to try the pies for herself.”

The map, now in its fifteenth edition, is often featured on television shows and in women’s magazines when new information is added. A number of map-themed products, including a plastic document folder and a logbook, are available, and an English-language version of the map has been produced. There is even a sister version of the Apple Pie Guide Map, the Tarte Tatin Guide Map, and in 2021, the Hirosaki Tourism and Convention Bureau oversaw publication of the Hirosaki Apple Pie Recipe Book.

Sightseeing Information Center staff have been core to building Hirosaki’s “apple city” brand. The popularity of apple pies has been a boon to both pie sellers and apple growers. 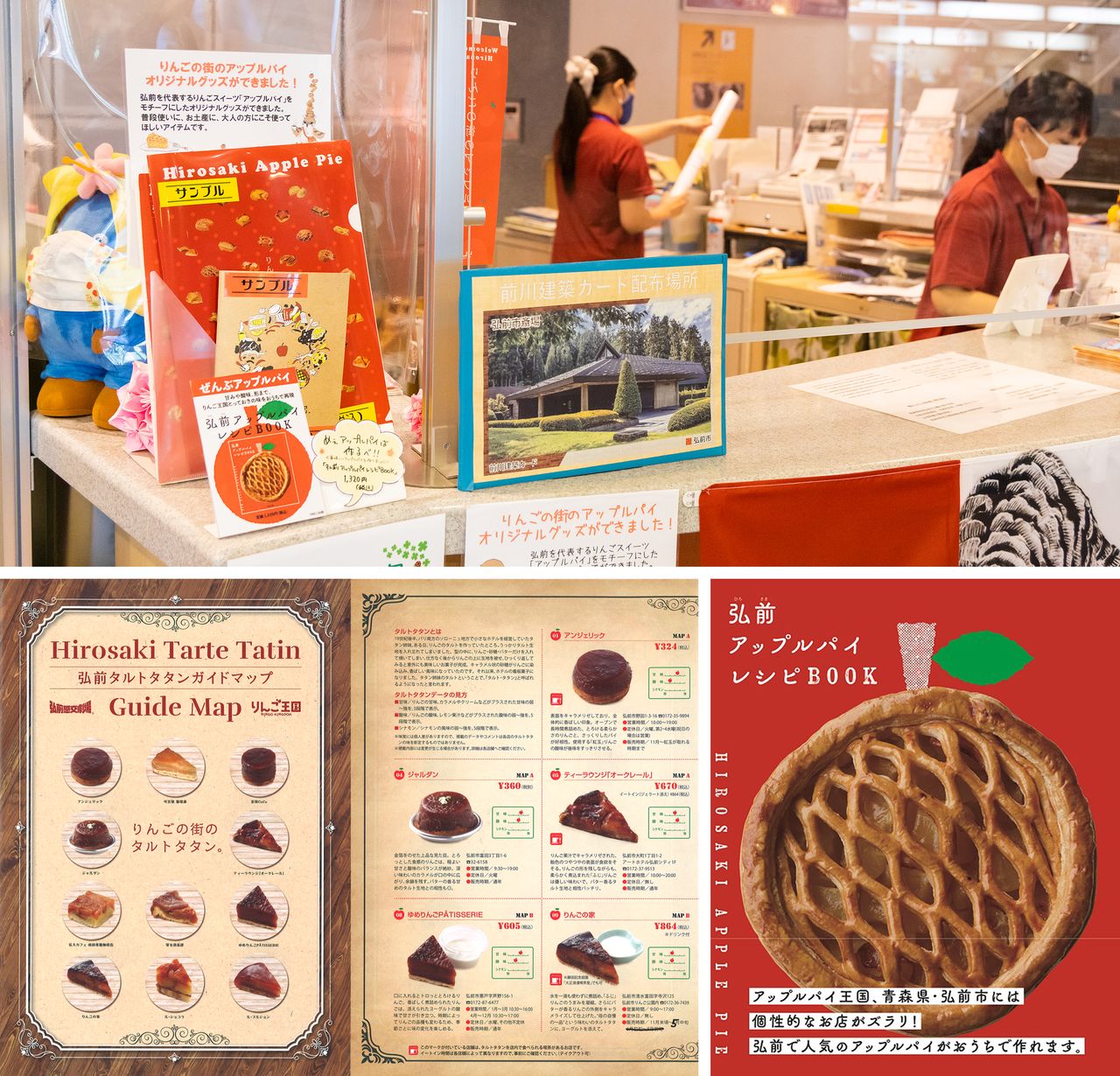 Clockwise from top: Map-related goods on display at the Sightseeing Information Center; the cover of the Hirosaki Apple Pie Recipe Book; and the Hirosaki Tarte Tatin Guide Map. 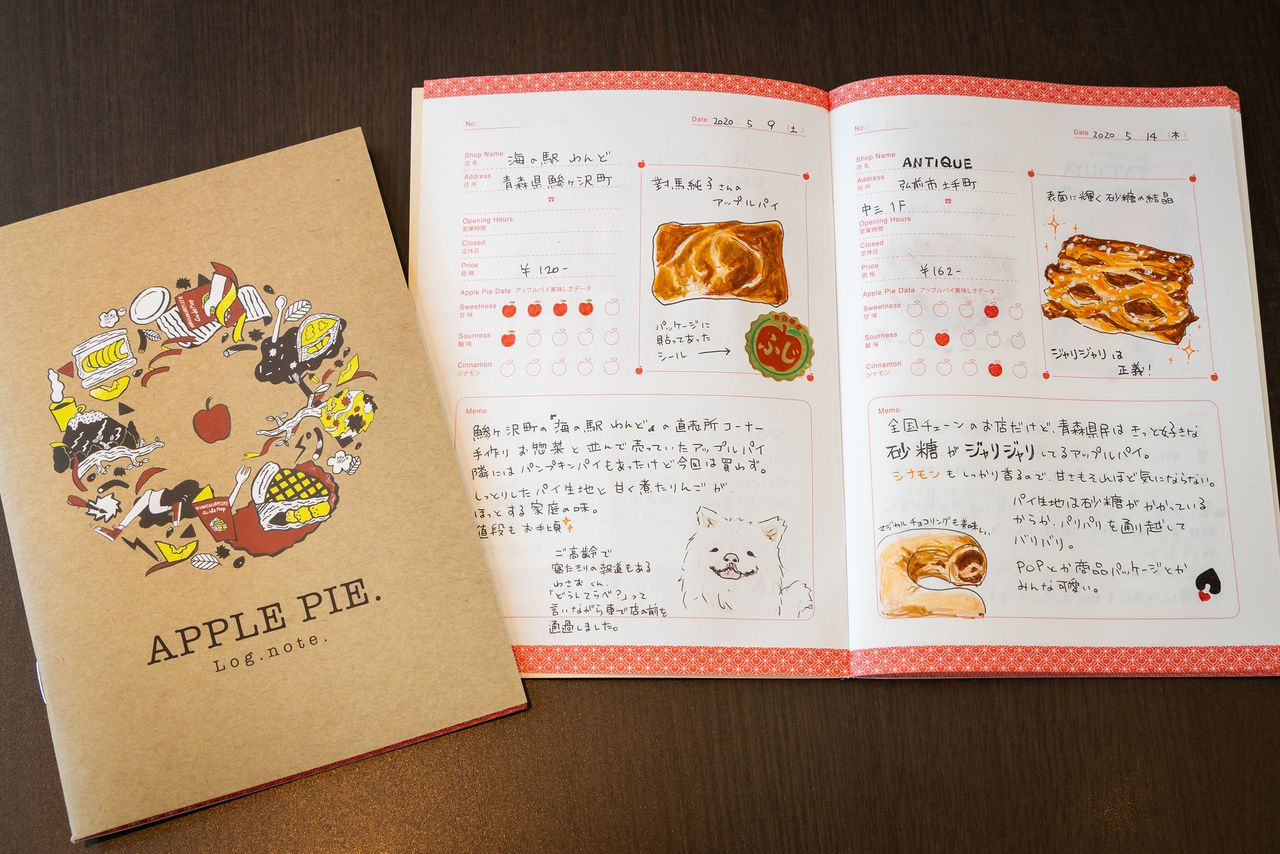 In her logbook, Nomura faithfully records her impressions of the apple confections she has sampled, including those made outside Hirosaki. Thanks to her extensive research, the Hirosaki Apple Pie Guide Map brims with authoritative information.

For visitors pressed for time and befuddled by all the different apple pie options, Nomura suggests the Taishō Roman Tea Room, which offers a wide selection of treats.

The tea room is in a picturesque Western-style building on the grounds of the Fujita Memorial Garden, a popular local recreation spot. On the day I visited, the tea room was serving nine varieties of apple pies, including one from Futamian, a wagashi confectioner that was the first in Hirosaki to sell apple pies, and another from Tamura Farm, made from Kōgyoku apples grown in its own orchards. 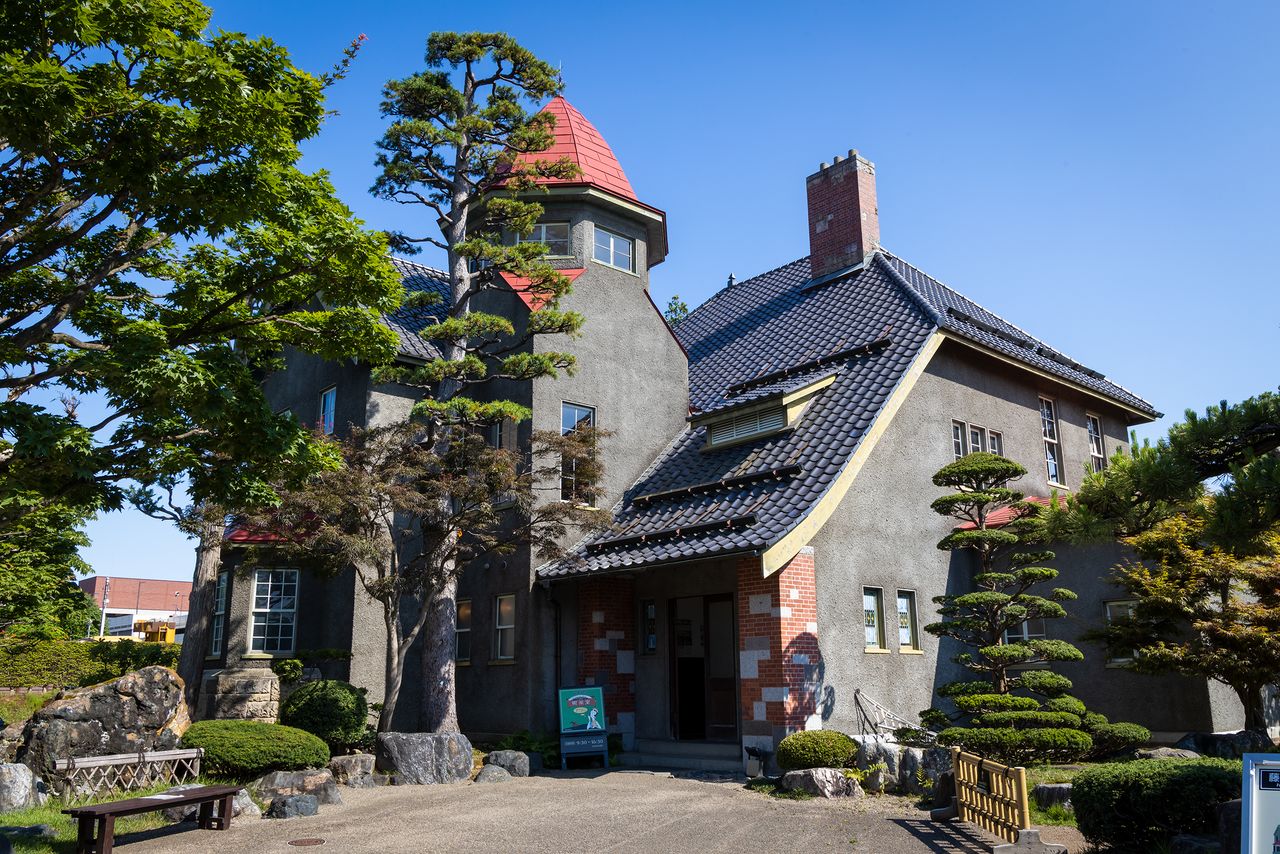 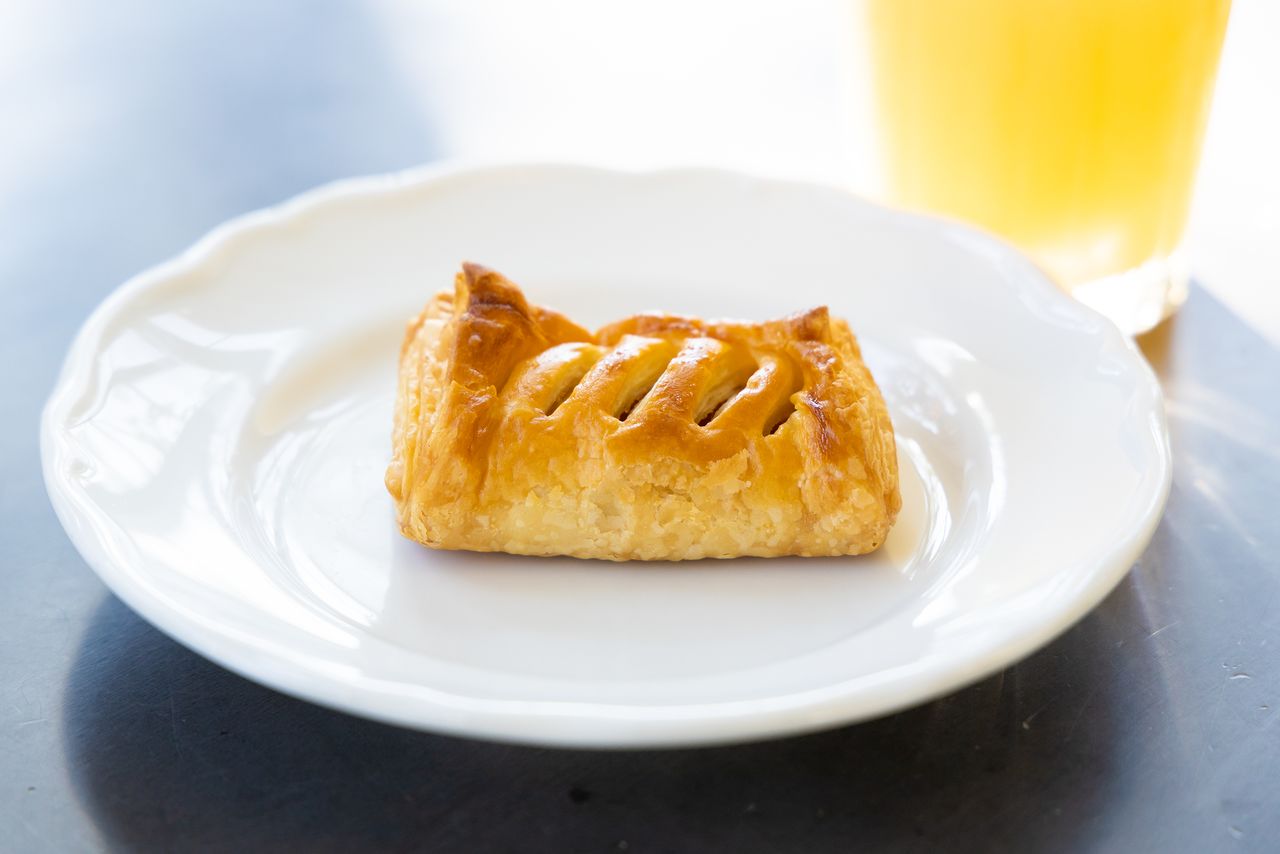 An apple pie from Futamian. The Japanese-style confectioner has been offering its apple pies, which have a mild flavor, for over 50 years. 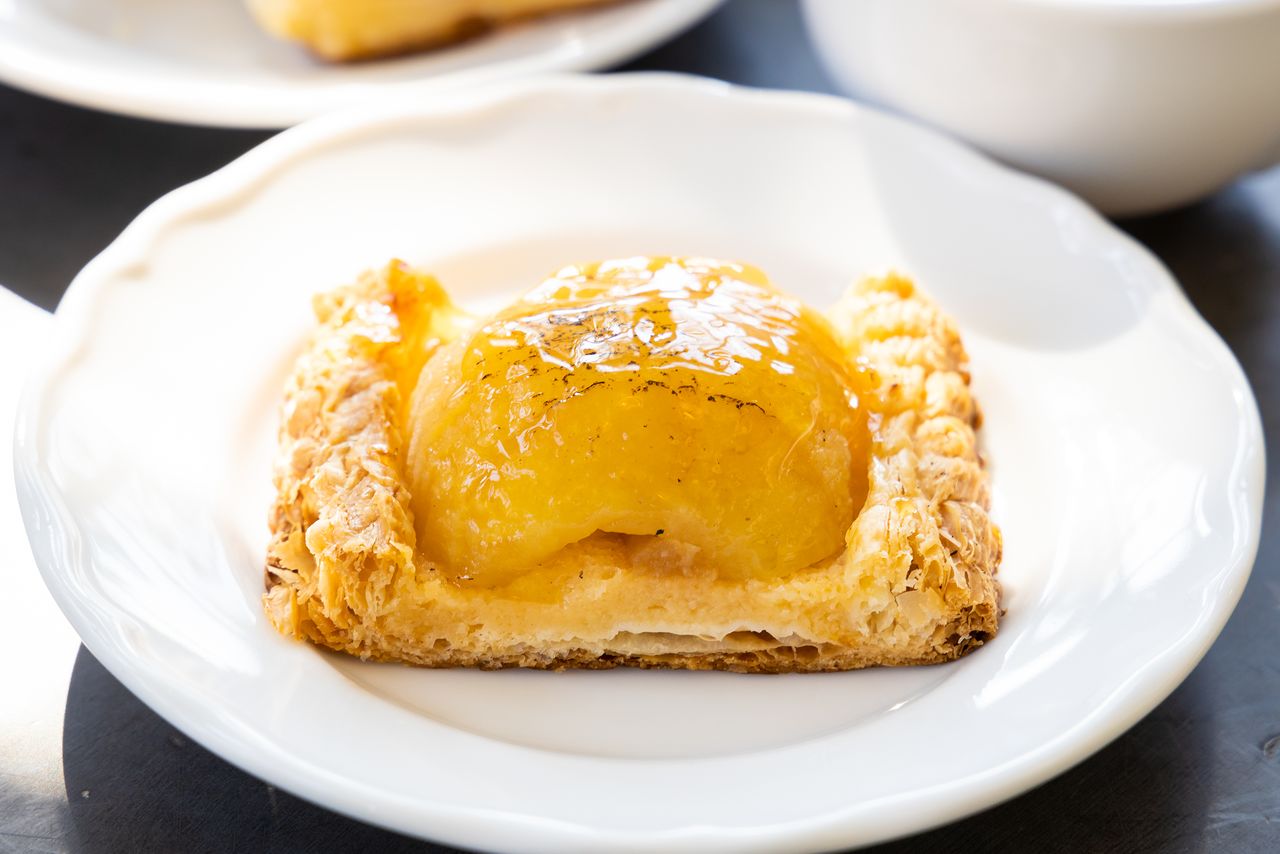 Customers to the Taishō Roman Tea Room a can tuck into a few pastries on the spot as well as buy different ones to take home and enjoy later. Station kiosks and tourist shops also sell a wide assortment of apple pies for takeout, allowing visitors to savor the taste of Aomori just a little longer. 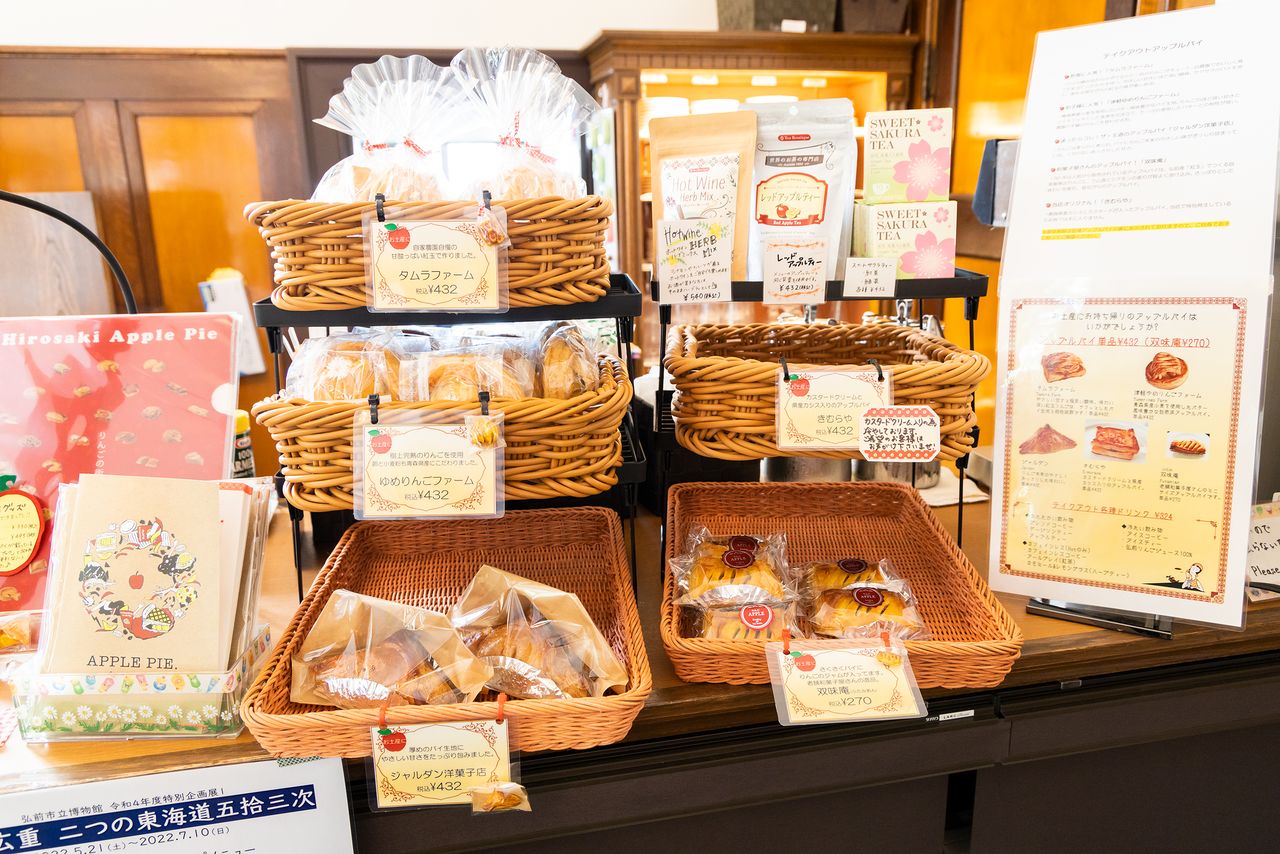 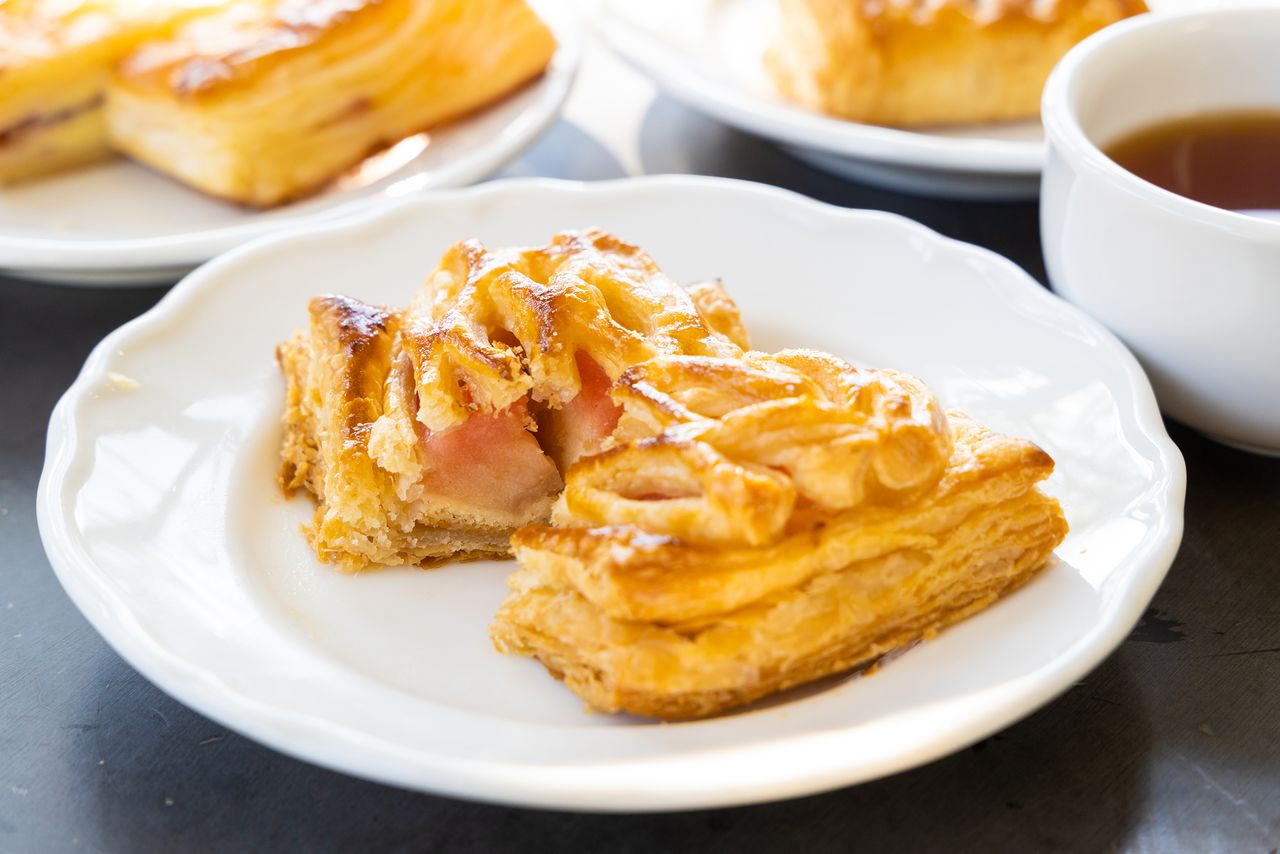 Tamura Farm products, made from the farm’s own Kōgyoku apples, are available throughout the city. The appetizing fruit is visible through the lattice-top crust. 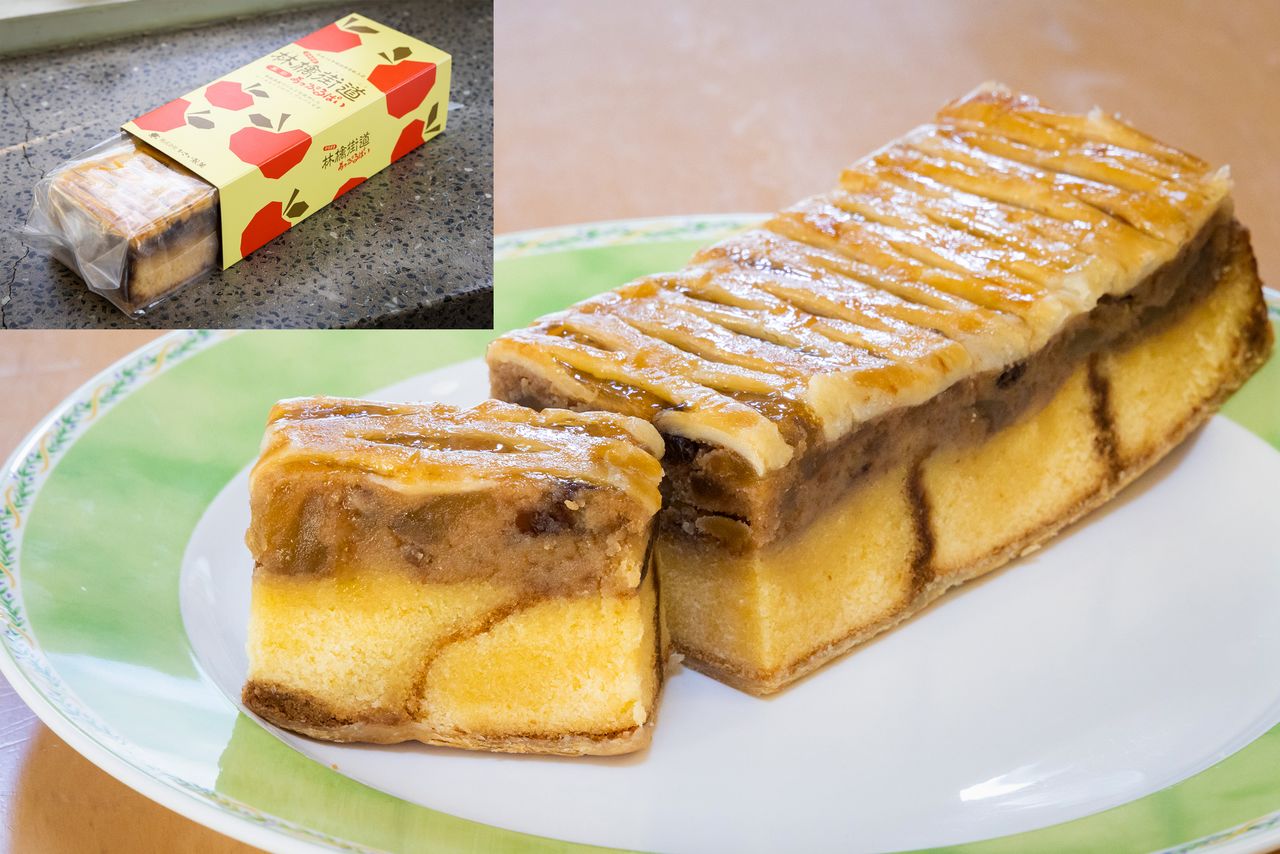 Kasai Seika’s Ringo Kaidō dessert consists of a layer of apples atop a spongy castella. Popular with tourists for over 30 years, it is sold at the Sakura House shop at the Sightseeing Information Center and other locations.

The first Western apples appeared in Aomori in 1875, supposedly brought by John Ing, an American teacher at the Tō-ō Gijuku school, who distributed them to his students at Christmas.

The Salon de café Ange, on the first floor of the former school’s residence for foreign teachers, is renowned for its crisp pies made using Eikōga, an apple variety developed in Hirosaki. It is fitting that the place responsible for introducing Japan to apples is today a venue where anyone can enjoy all sorts of delicious apple pies. 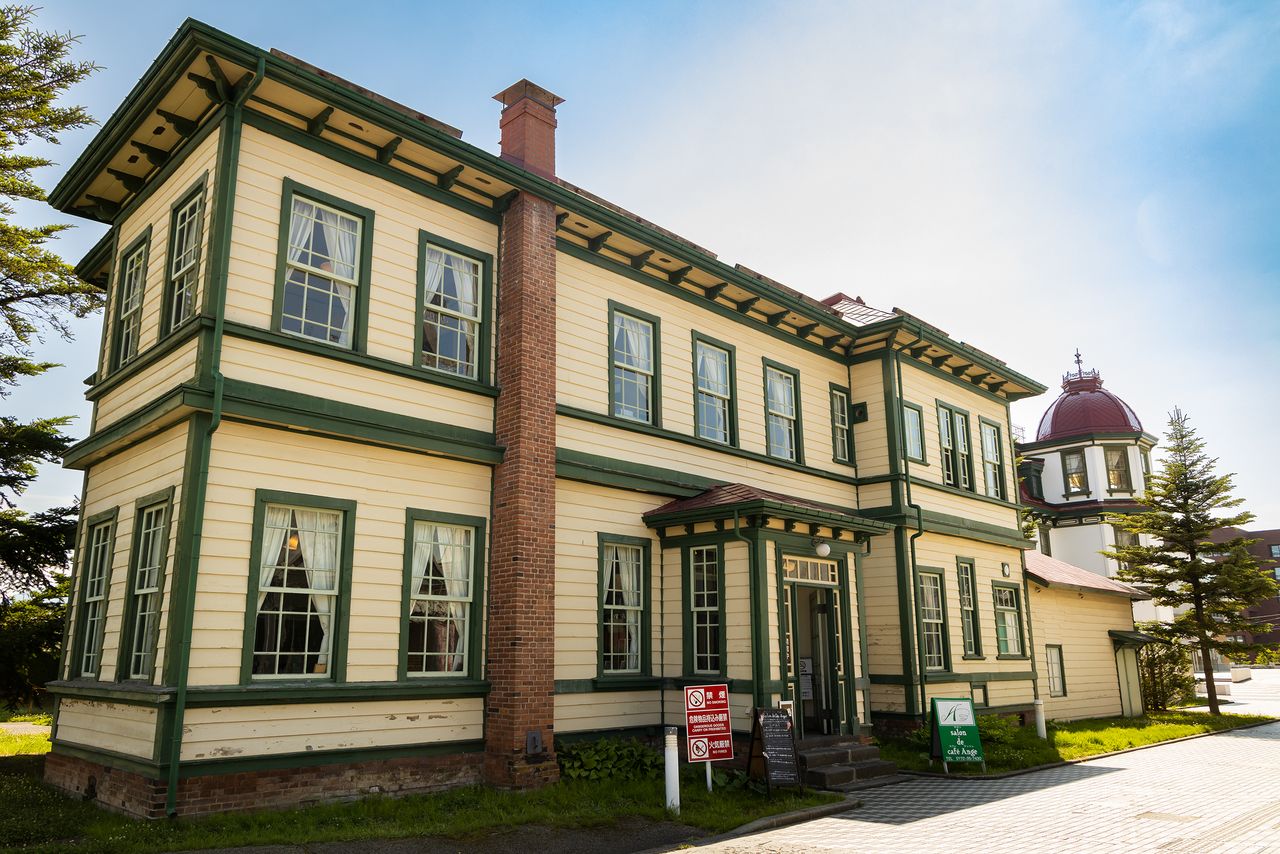 This former residence for foreign teachers at the Tō-ō Gijuku school, an education institution originally set up and operated by the Hirosaki domain. 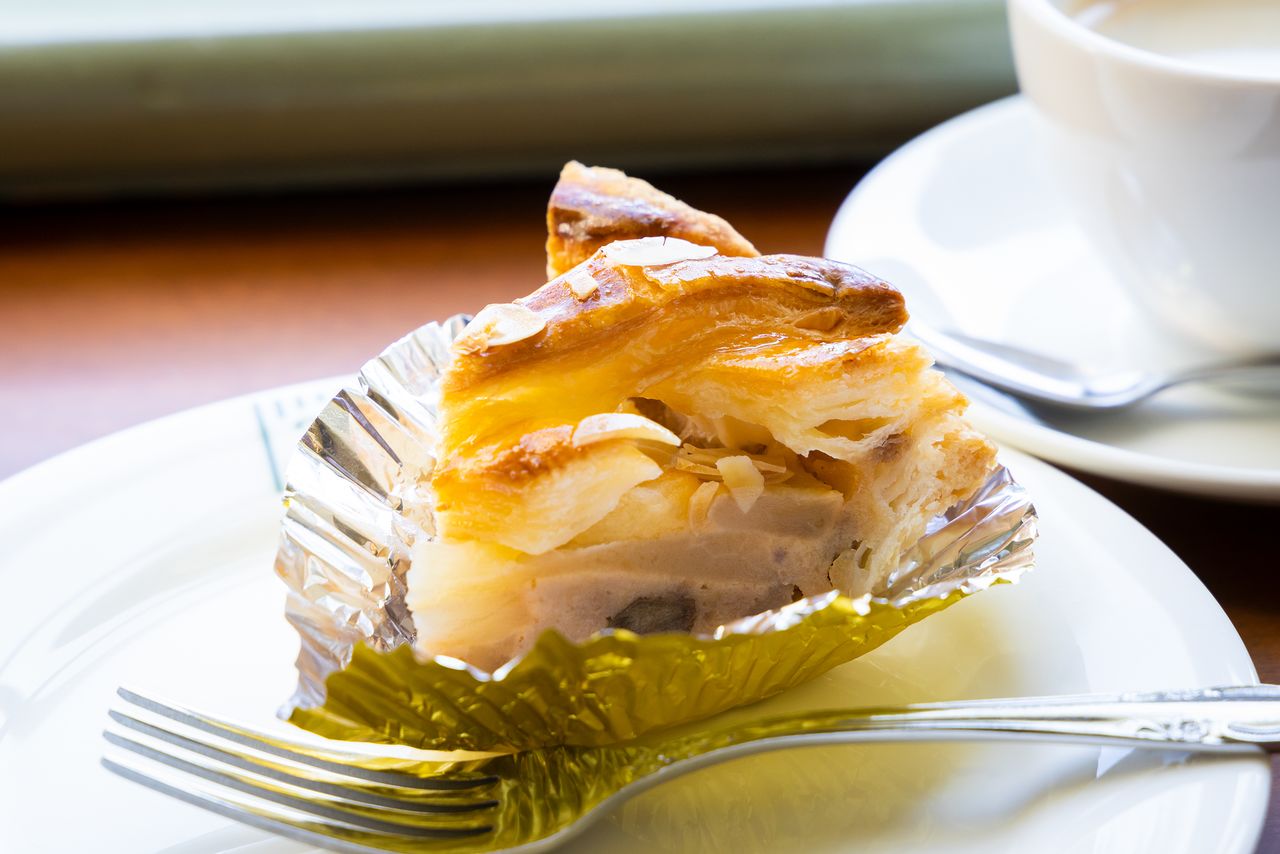