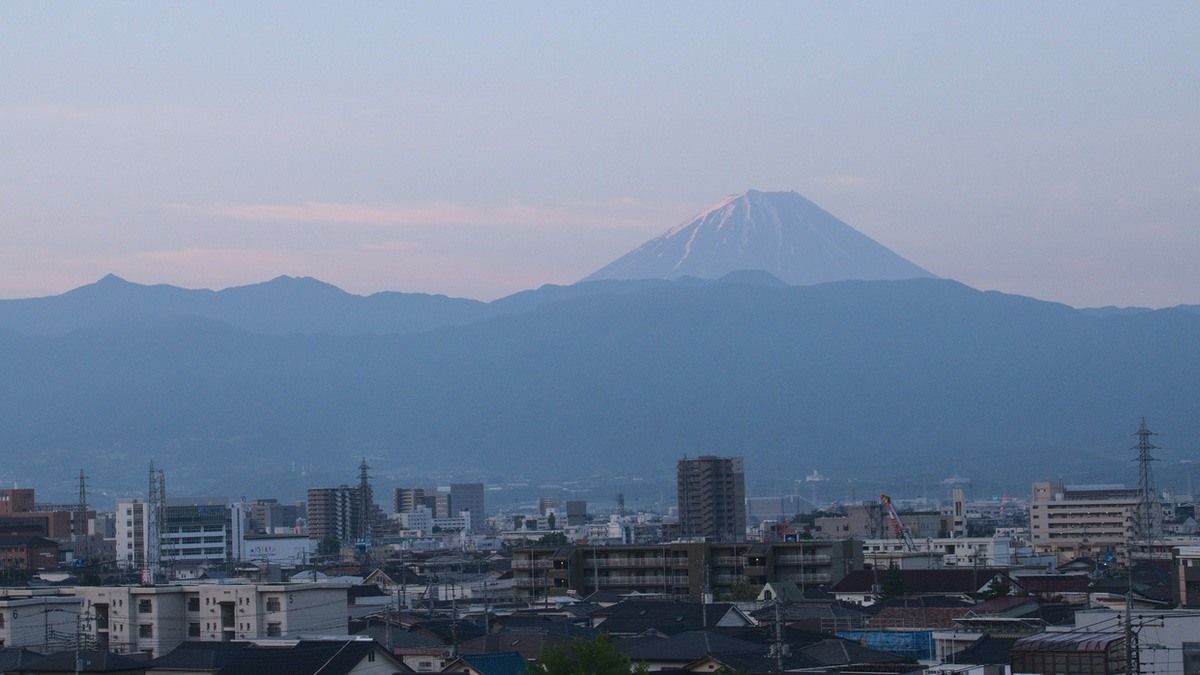 Building a Brand on Water with GI Yamanashi

Food and Drink Travel Economy Nov 2, 2022
Landlocked Yamanashi Prefecture is home to the towering Southern Alps, as well as Mount Fuji, and the cool climate and plentiful clean water have helped make it not only one of the nation’s biggest fruit producers, but also the source of 40% of Japan’s bottled water. That natural resource has become key to expressing the local sake industry’s unique identity in a crowded landscape.

A Kingdom of Water

Yamanashi might be more known for wine, but in economic terms another beverage is far more important to the prefecture: water. Forty percent of Japan’s bottled water comes from Yamanashi sources. The prefecture is surrounded by high mountains that gather heavy snowfall in winter and lots of rain in warmer months. This precipitation filters through volcanic soil and rock into underground aquifers, feeding springs and creating rivers. The prefectural and municipal governments are aware of the value of the resource, and have taken legislative steps to ensure that water quality remains as high as possible. This plentiful, clean water is what inspired Suntory to build the Hakushū whisky distillery here in 1973, and now that water is at the core of the local sake-brewing industry.

Most people know that the main ingredient of sake is rice, but in fact over 80% of the finished drink is actually water used in the brewing process. Sake brewers will tell you that a good supply of water was often the deciding factor in where sake breweries are located, so it stands to reason that Yamanashi, with its plentiful sources of quality water, would be prime for brewing.

The prefecture’s recent acquisition of a Geographical Indication for sake is based in large part on that water. GIs are governmentally conferred naming rights for products unique to a certain region and meeting certain conditions. This is how “Champagne” can only come from the Champagne region of France. Recent years have seen Japan adopt this World Trade Organization standard for a variety of products. Yamanashi has had a GI for wine since 2014, and with its April 2021 GI for sake, it became the first prefecture in Japan to get that recognition for two different alcoholic beverages.

GI standards are usually based on locally produced ingredients and local traditions. For sake, most of the 13 current GI areas primarily require the use of local rice, but in Yamanashi’s case the primary condition is water source. The sake brewery must use water from one of the six major sources, and must be made and packaged solely within the prefecture. Sake that meets the conditions and passes through an official quality certification can use the GI Yamanashi label as a representative of the prefecture’s flavor. 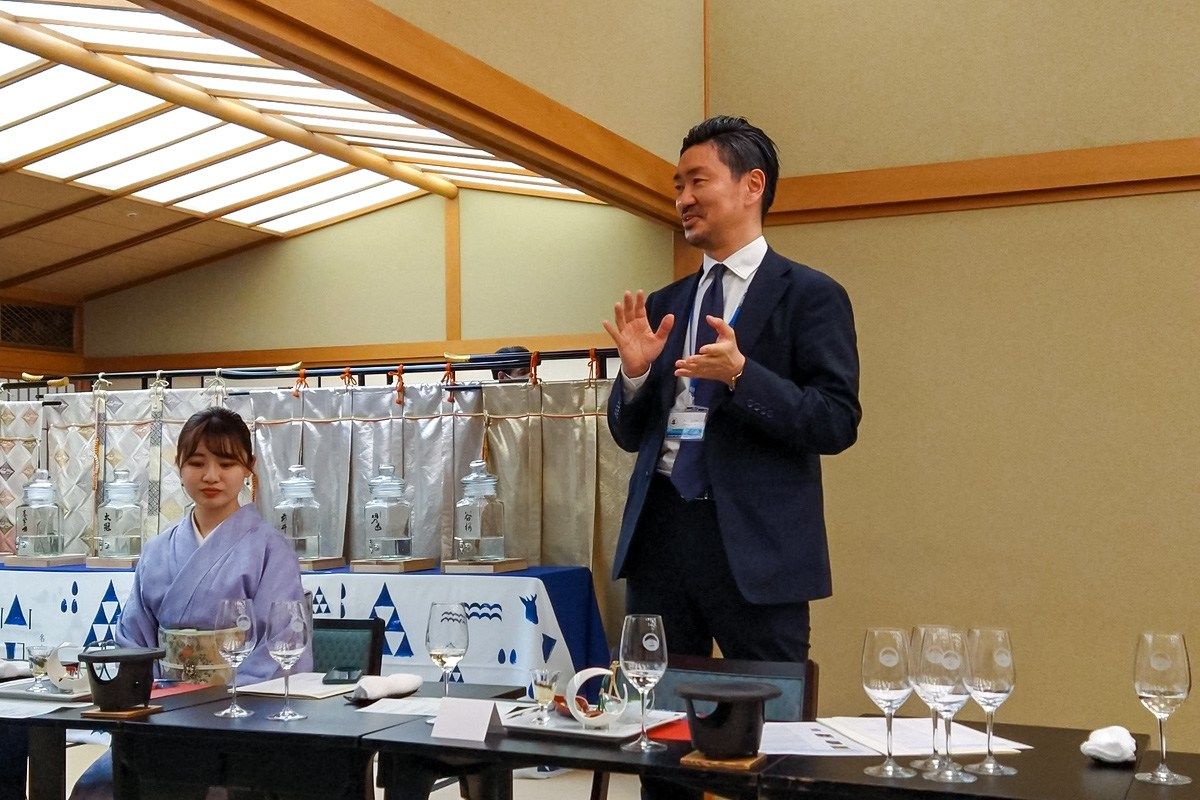 Amano Rei, the owner and manager of Sasaichi Shuzō in Ōtsuki, Yamanashi, was part of the efforts to develop the GI in cooperation with the Yamanashi Prefecture Brewers Association. He explains that the brewers and officials share hopes that it will help add to the perceived value of the prefecture’s sake. One official adds that the GI is a way to enhance perceived value, and the focus on water also creates a clear difference from other brewing regions. The need for differentiation is great, given that there are roughly 1,200 sake breweries in Japan, all vying for room in a shrinking domestic market and a still-tiny global one.

All 10 member breweries of the Yamanashi Sake Brewers Association are eligible for the GI, but each is also free to brew sake in their own way within those restrictions. This freedom allows each brewery to maintain a clear identity while still adopting the shared standards.

Ide Jōzōten brews sake under the label Kai no Kaiun near the banks of Lake Kawaguchi, at the foot of Mount Fuji. The brewing water is tap water—which means, for the city of Fujikawaguchiko, spring water pumped directly from the side of the mountain. Ide uses that spring water to create a wide range of sake across the spectrum from super-premium to mass-market table sake, but the focus for Ide is equally on rice. Ide Yogouemon, the owner and manager of the brewery, explains, “I personally prefer richer sake that’s geared for warmer drinking.” In brewing terms, that means the sake benefits from more rice umami, and so the brewery has begun to balance its water focus with locally sourced premium brewing rice. “It’s hard to get high-quality Yamada Nishiki rice locally,” Ide laments, “because the volcanic soil is mostly too porous to hold water in paddies in this part of Yamanashi.” 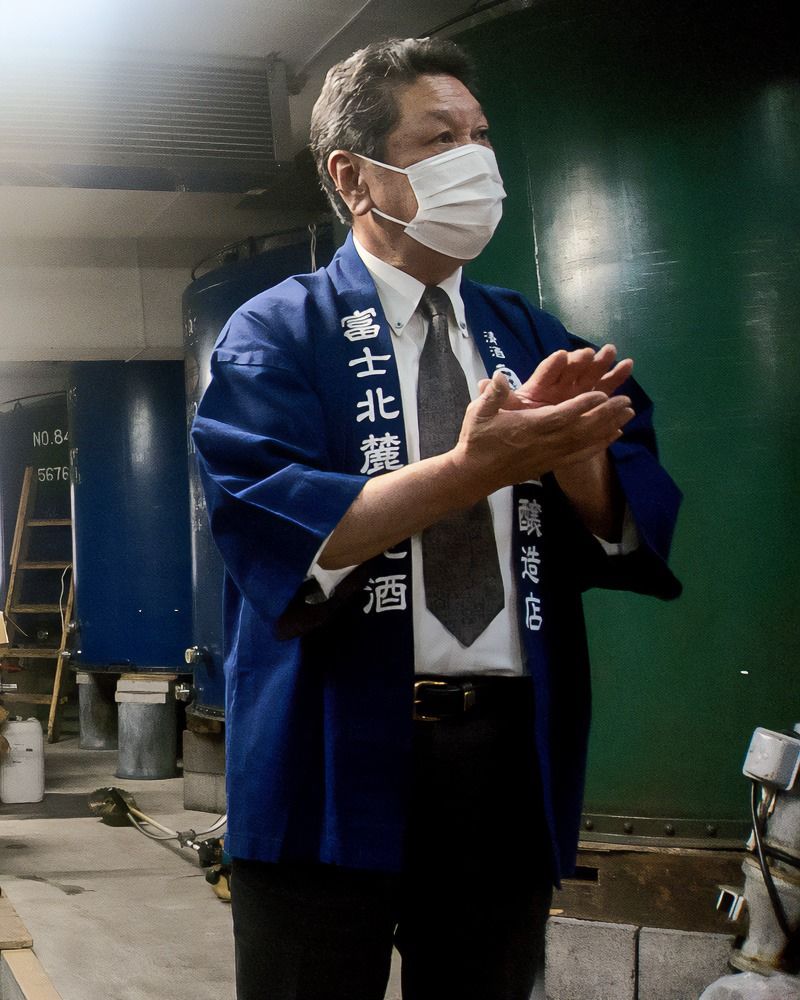 Ide Yogouemon explains a point about his brewery. (© Jim Rion)

The particularly cool climate is also a challenge for rice growing. However, from 2003 Ide has succeeded in sourcing a portion of its brewing rice from local fields that also use Fuji spring water, completing the circle of water.

Yamanashi Meijō Shuzō, home of the label Shichiken, stands at the foot of Japan’s Southern Alps in Hokuto, Yamanashi. It has taken the water-based elements of the Yamanashi GI to particular heart. Brewery head Kitahara Tsushima says that water is the key to Shichiken flavor. “We use the same water source as the Hakushū distillery,” he says, “and Shichiken is brewed to express the quality of that water.” To do so, the brewery has made extensive adjustments to its processes. “We try to reduce the physical impact on the rice as much as possible so that it doesn’t dissolve very much in brewing.” This means that the sake has much less of the inherent flavor of the grain, allowing the water’s influence to come through more prominently. One example of this is the brewery’s use of a special machine that mixes rice and rice kōji—which has been inoculated with the mold Aspergillus oryzae—as it is moved from one tank to the next. Normally, the two ingredients are added separately to the same tank and then mixed manually by staff using large wooden poles, which would also partially crush the rice. 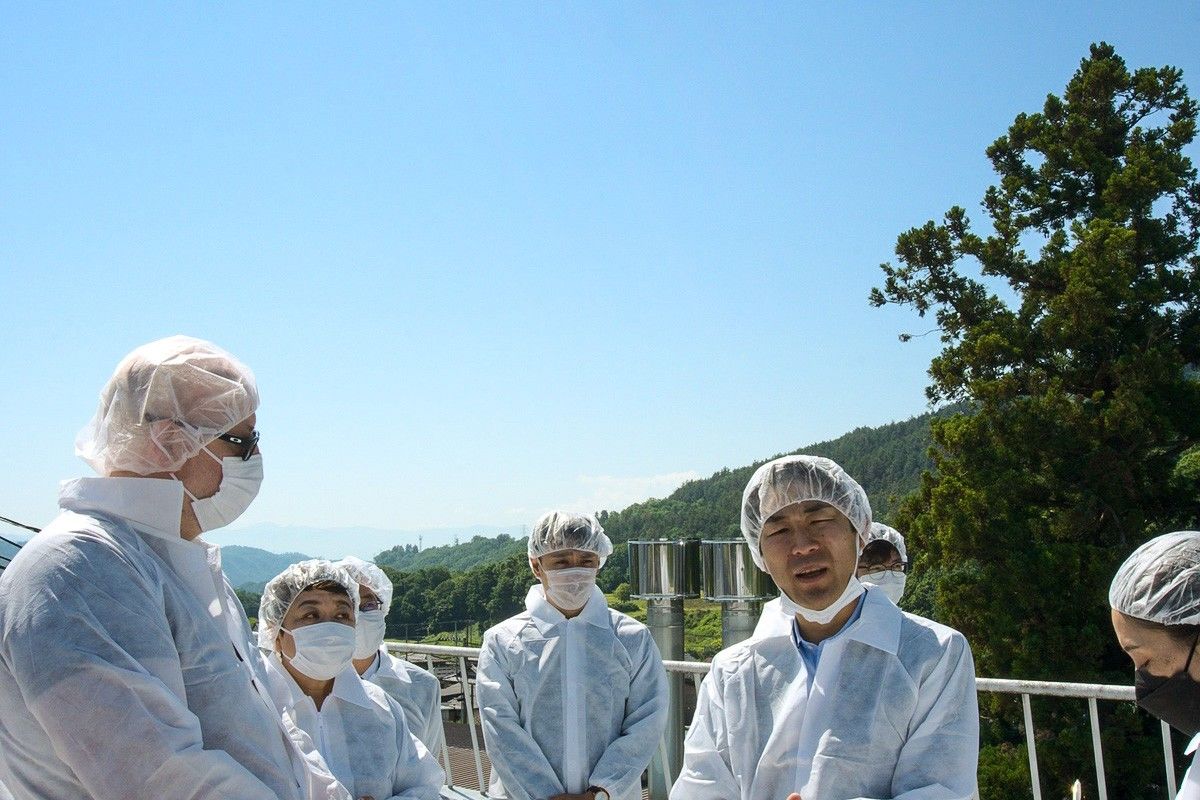 Kitahara Tsushima (with mask down) discusses brewing with Wine and Spirit Education Trust members against the backdrop of the Southern Japanese Alps. (© Jim Rion)

The effects of this can be seen in something called kasubuai, which is the percent of remaining solids left after the liquid sake is filtered from it. Sources vary on the average values, but most agree that the typical amount is 30%–40%, meaning that over half of the rice used in fermentation has dissolved into the sake to create flavor and alcohol. A particularly rice-heavy sake, like Hyogo Prefecture’s Kenbishi, can reach a kasubuai of around 10%, meaning that 90% of the rice has gone into the final liquid. Shichiken’s kasubuai ranges from 50% to 60%, so overall a majority of the fermentation rice is left undissolved.

The resulting sake is light and delicate, with a clear indication of the softness of the brewing water and a much lower expression of the rice.

Ide Jōzōten and Yamanashi Meijō represent two extreme points on the scale. The other breweries in the prefecture fall somewhere in between, and so each has been able to maintain their individuality. Kikuya Natsuki, a sake educator with the British Wine and Spirit Education Trust who has been instrumental in developing the WSET’s highest level of sake certification, expresses admiration for the diversity of sake that Yamanashi’s breweries offered. “We tasted sake from all the Yamanashi sake makers, and the styles are very different and varied to each other. . . . But even though the styles are quite different, and there’s no uniform style or set distinctive notes of what makes Yamanashi style, we all agree that the beautiful water made it possible to make this diverse sake culture of Yamanashi.” For her, the emphasis on water in the prefecture’s sake messaging is an excellent choice. “It makes sense to me and leaves a strong, remarkable impression of how Yamanashi producers express this message together,” she goes on. 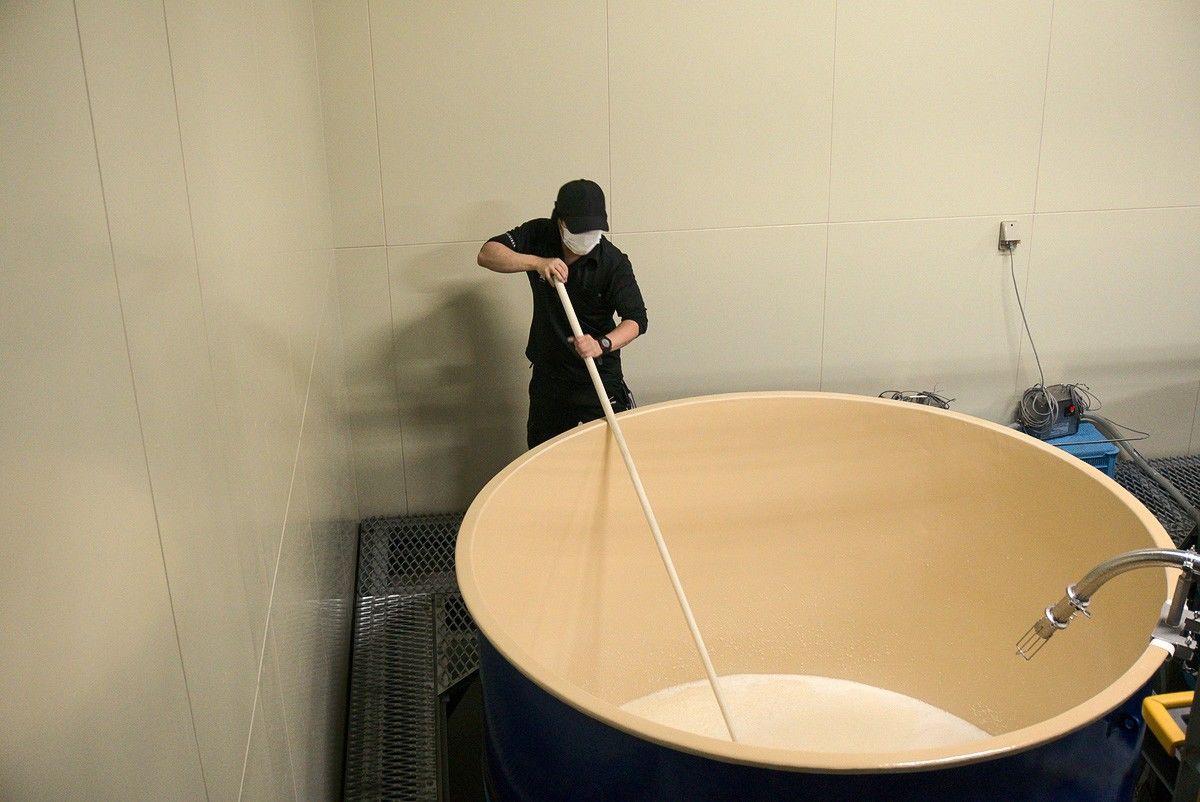 Yamanashi’s sake brewers and the prefectural authorities are hoping to use this new indication as a stepping-stone to increased international recognition of the local sake. In June of 2022, the Yamanashi Sake Brewers Association hosted members of the global sake community to demonstrate its unusual take on an increasingly common label.

One of those guests was Senior Commercial Development Manager Robert McCaughey. He finds Yamanashi’s focus on water a refreshing new idea in Japan’s growing field of GIs. “The GI system in Japan is becoming very interesting and I think that this is a move away from what was potentially becoming a little homogeneous,” McCaughey says, referring to the industry’s trend toward using rice and its polishing rates, or seimaibuai, as a primary focus when promoting premium sake. “Here in Yamanashi, the focus being on the water, I think, is really appropriate, and it’s something that people can very easily buy into. Water is such a large part of the total volume of what is in a bottle of sake that it makes sense to use that as a core driver of what makes it distinctive.”

Adrian Goh, head of Singapore’s sake retailer Inter Rice Asia and a WSET educator, agrees. “Yamanashi is unique in that they actually have classes of water, based on being from one of six distinct distribution systems. In fact, I do not recall seeing any similar water restrictions, other than water used in brewing needing to be from that prefecture, in any other sake GI.” He goes on to explain that this is quite important for sake. “Water makes up 85% of sake, and that will actually make a very big impact on the final product. I was able to taste the brewing waters of eight or nine breweries, and it was really interesting to see that although they are from the same prefecture, the source actually determines the flavor of water. Some were extremely pure, some had a little bit more minerality or a little bit more structure, and I’m sure that this shows up in the sake brewing system and the sake brewed.” 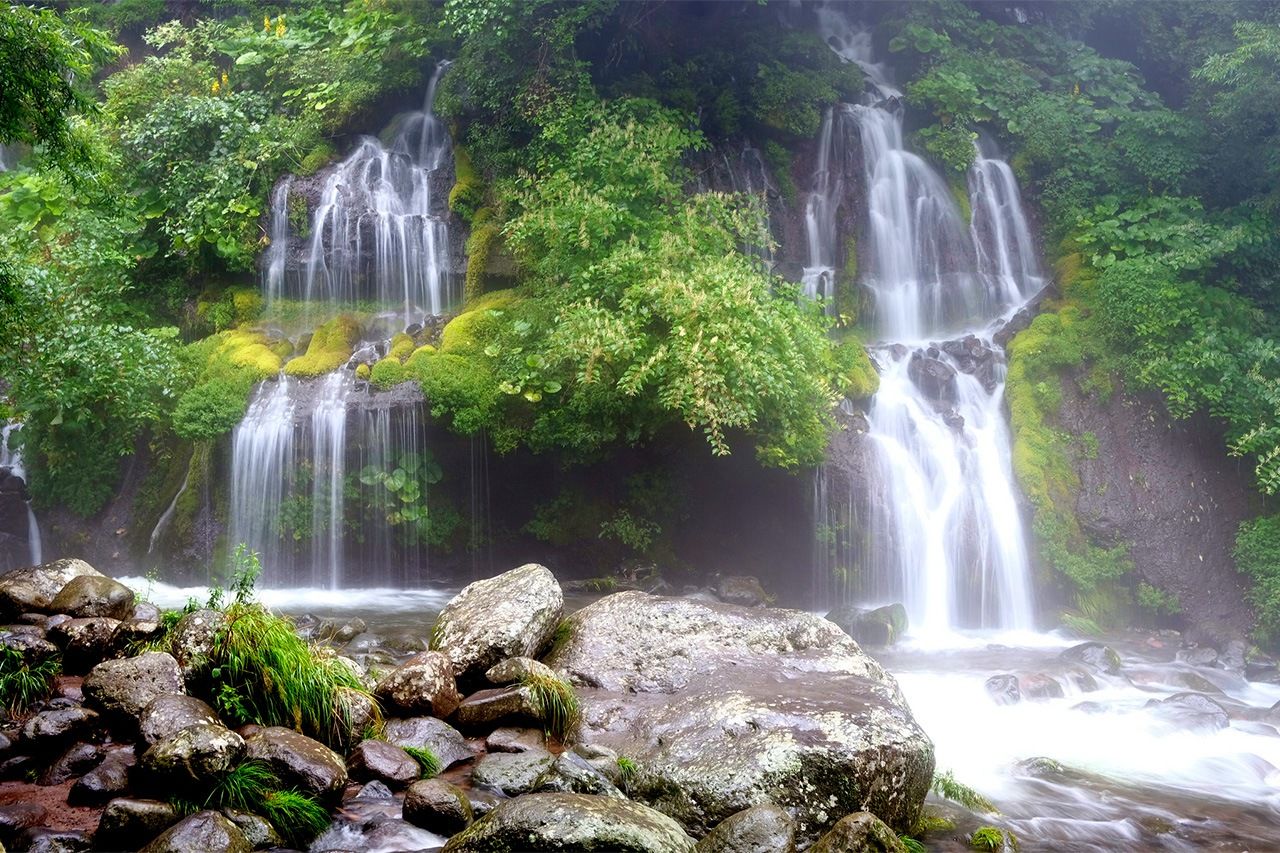 The Goryū Falls are fed from springs to the south of the Yatsugatake Range, one of Yamanashi’s six key water sources. (Courtesy of Nishijima Yasu)

Despite the ever-growing number of Japan’s sake GIs, Yamanashi’s remains a unique development in the industry and is bound to help it stand out. According to the WSET’s Kikuya, the potential it holds for the sake’s future is bright. “I think they’re in the right hands and I’m looking forward to see what’s going to happen over the next ten years.”