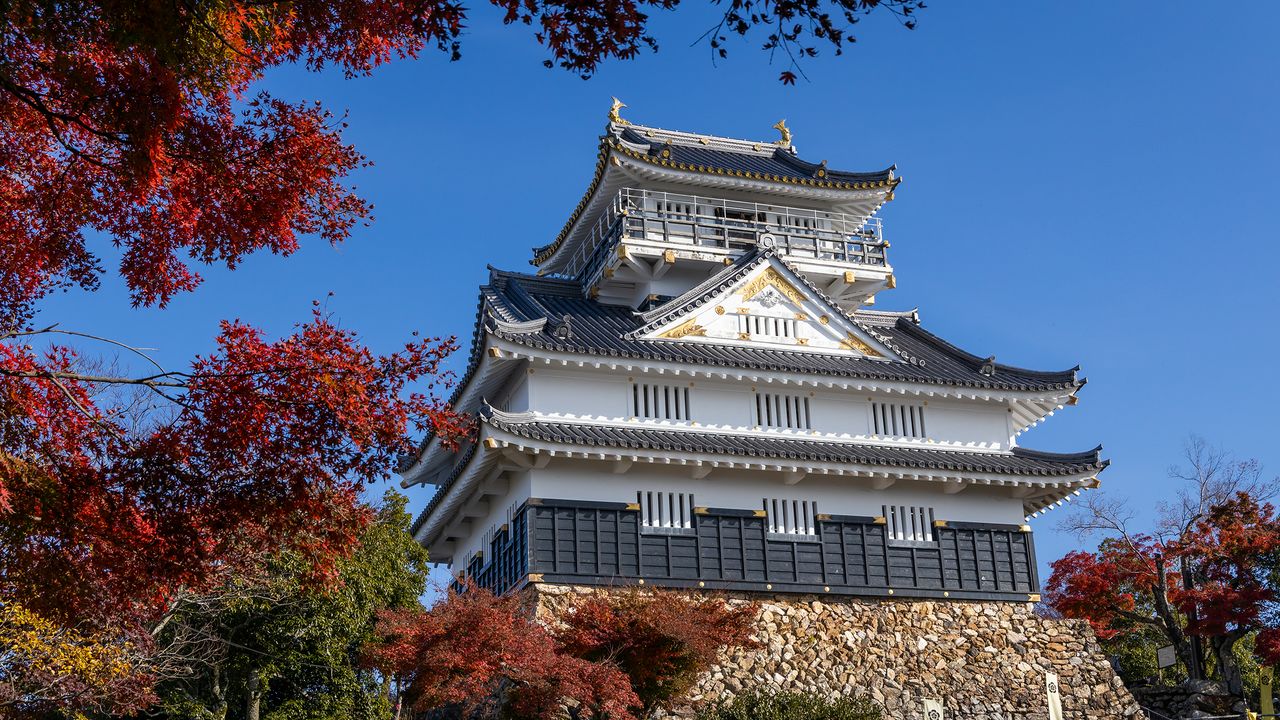 History Travel Jan 16, 2023
Once the home of Oda Nobunaga, Gifu Castle stands today as a symbol of the area’s historical importance. Archeological work has shed light on the keep’s past and the lives of residents of the surrounding castle town.

Positioned atop Mount Kinka looking down on the southern bank of the Nagara River, Gifu Castle was where warlord Oda Nobunaga (1534–82) began mapping out his campaign to unify Japan. Although he ultimately failed in his ambition, he set in motion forces that transformed Japanese history. 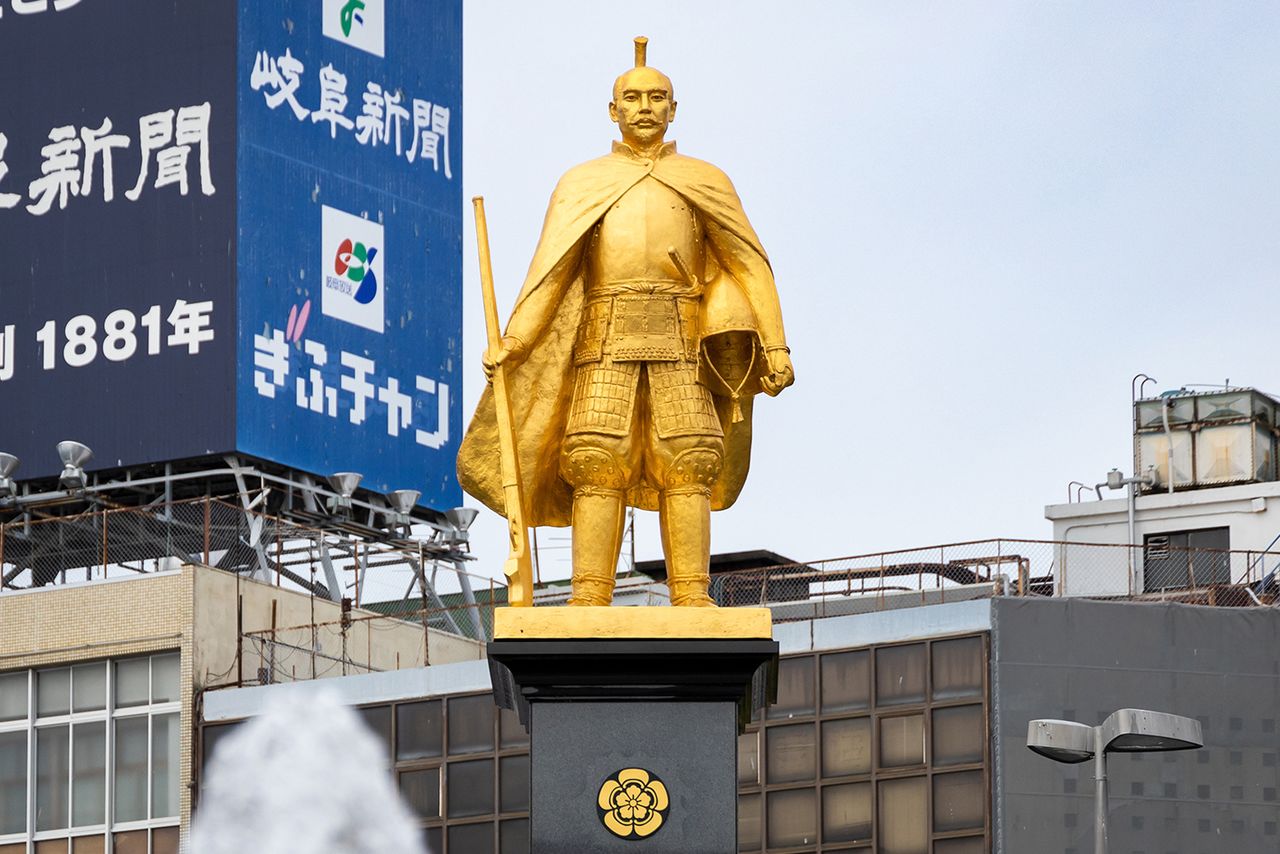 A statue of Oda Nobunaga outside of Gifu Station. Erected in 2009, the monument to the famous warlord was funded by donations from residents.

Nobunaga was the hereditary daimyō of Owari Province (now Aichi Prefecture). In 1567, he conquered neighboring Mino, exiling its ruler and taking up residence in its stronghold of Inabayama Castle, which he renamed Gifu Castle. Nobunaga is known for his clever battle tactics, including his early adoption of firearms. But he was also a social and economic reformer who introduced measures that brought prosperity to the area. 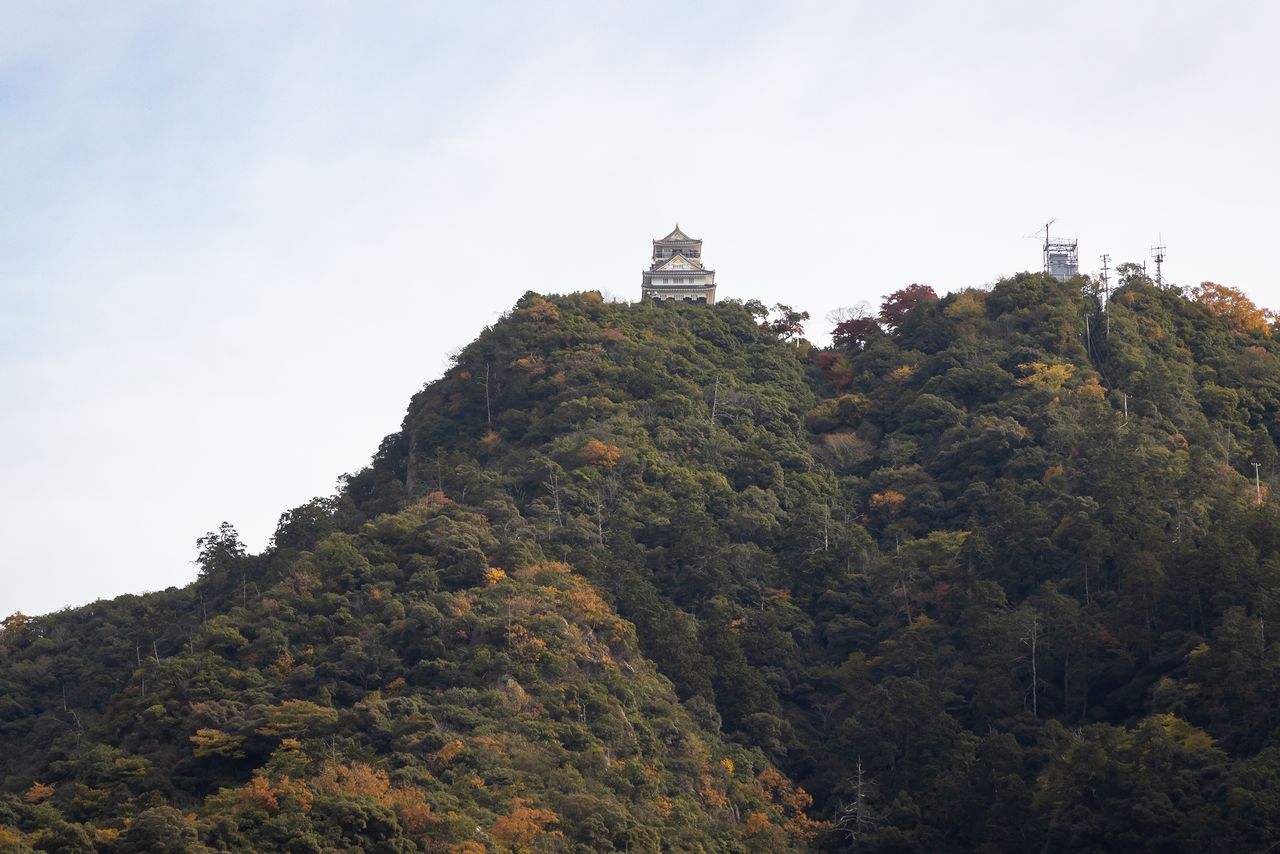 Gifu Castle atop 329-meter tall Mount Kinka. The main tower of the keep was rebuilt with modern materials in 1956. 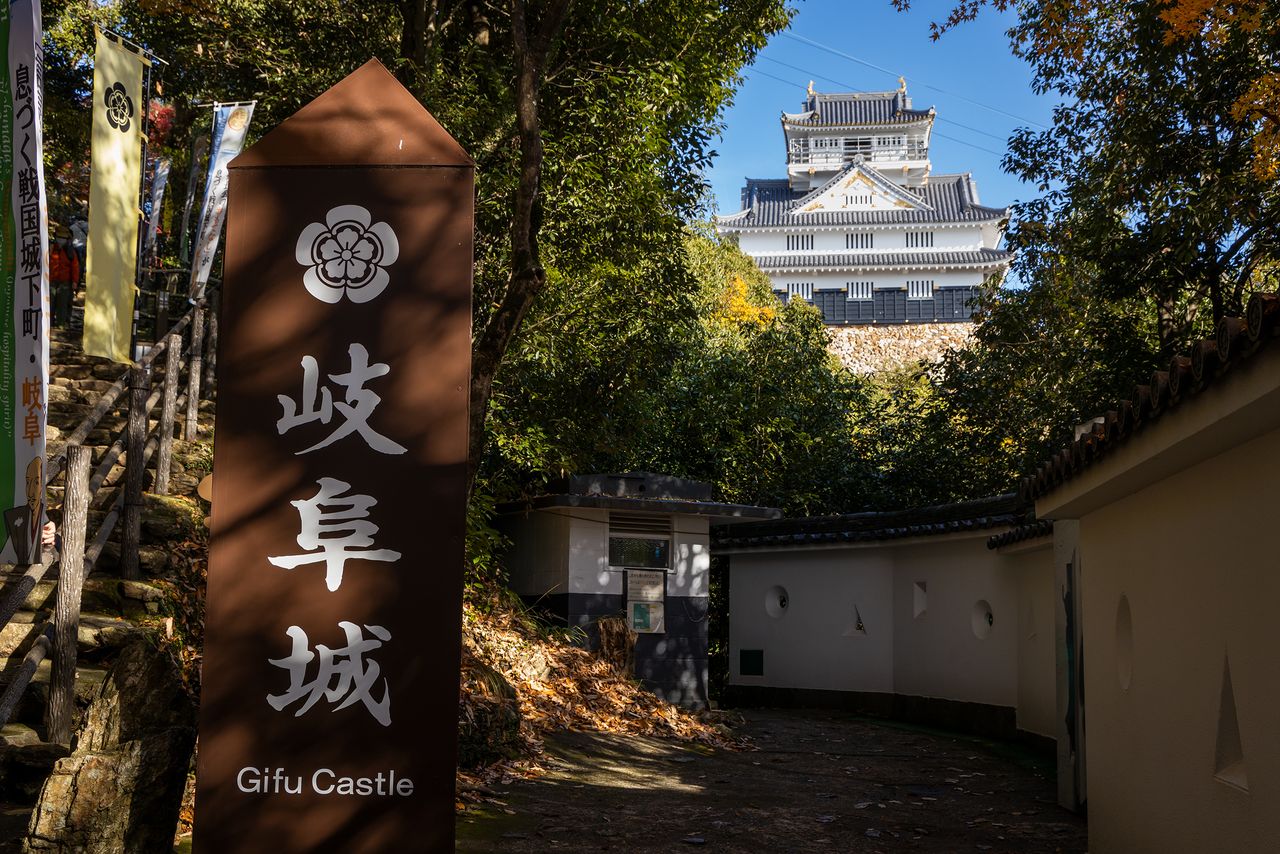 Gifu Castle as seen from Sanchō Station on the Kinkazan Ropeway, near the Ninomon castle gate.

Strategic Base of Operations

As a young man, Nobunaga had a reputation as being simple minded. However, when he married the daughter of Mino daimyō Saitō Dōsan in a political arrangement, he so impressed his new father-in-law that the aged patriarch entrusted the domain to him before falling in battle to his own son Yoshitatsu, who had rose up in rebellion. Fulfilling Dōsan’s dying wish, Nobunaga assumed control of Mino after nine years of conflict, defeating Yoshitatsu’s son Tatsuoki at the Siege of Inabayama Castle. Entrenched in his new home, Nobunaga chose to rename the keep and surrounding castle town Gifu.

At Gifu, Nobunaga cultivated his far-reaching ambitions, as exemplified by his use of a seal bearing the phrase tenka fubu, which roughly translates as “unify the realm with military might.” Gifu was strategically suited to this purpose. Setting near the important checkpoint of Fuwanoseki on the edge of the Tōsandō region that separated east and west, it provided Nobunaga ready access to the capital of Kyoto, a key piece in the warlord’s plans. 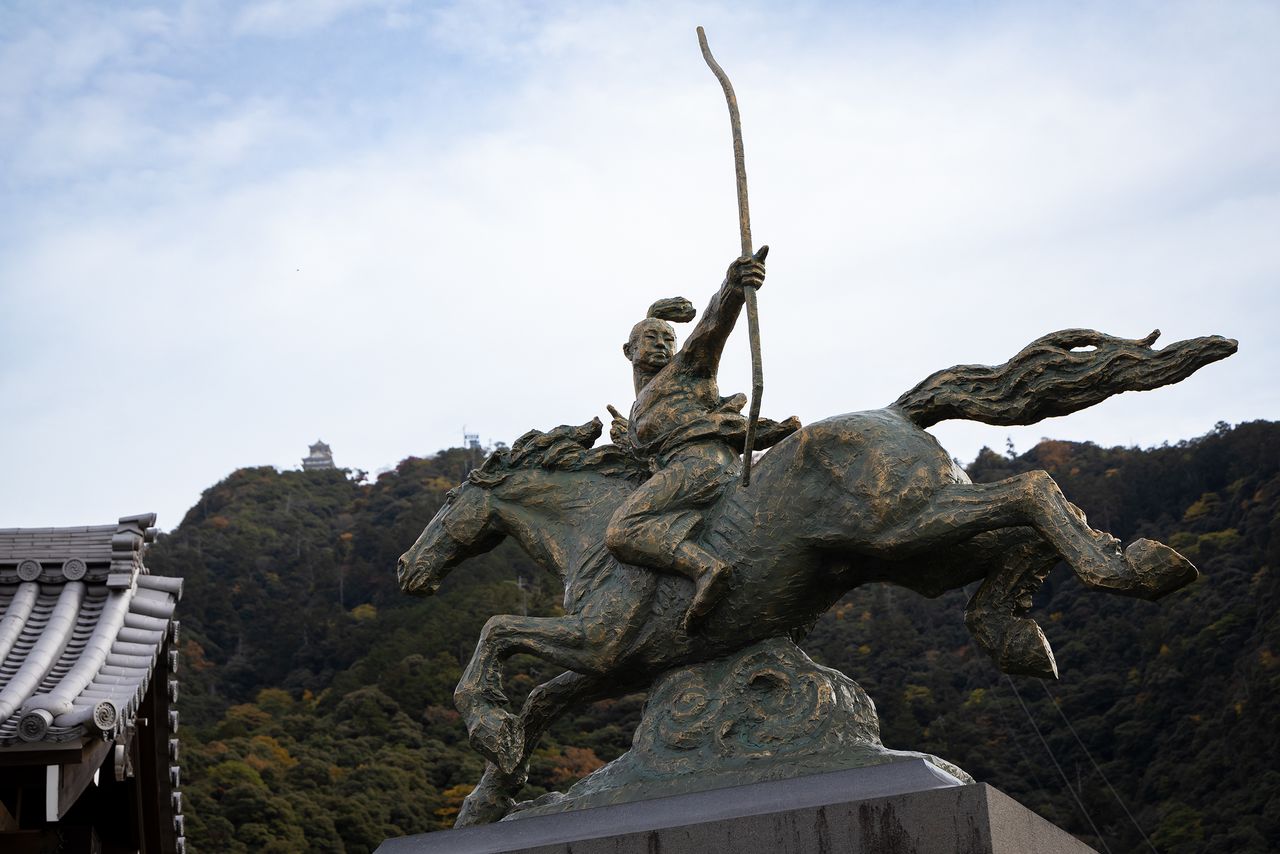 A statue of Nobunaga on horseback at the entrance of Gifu Park. 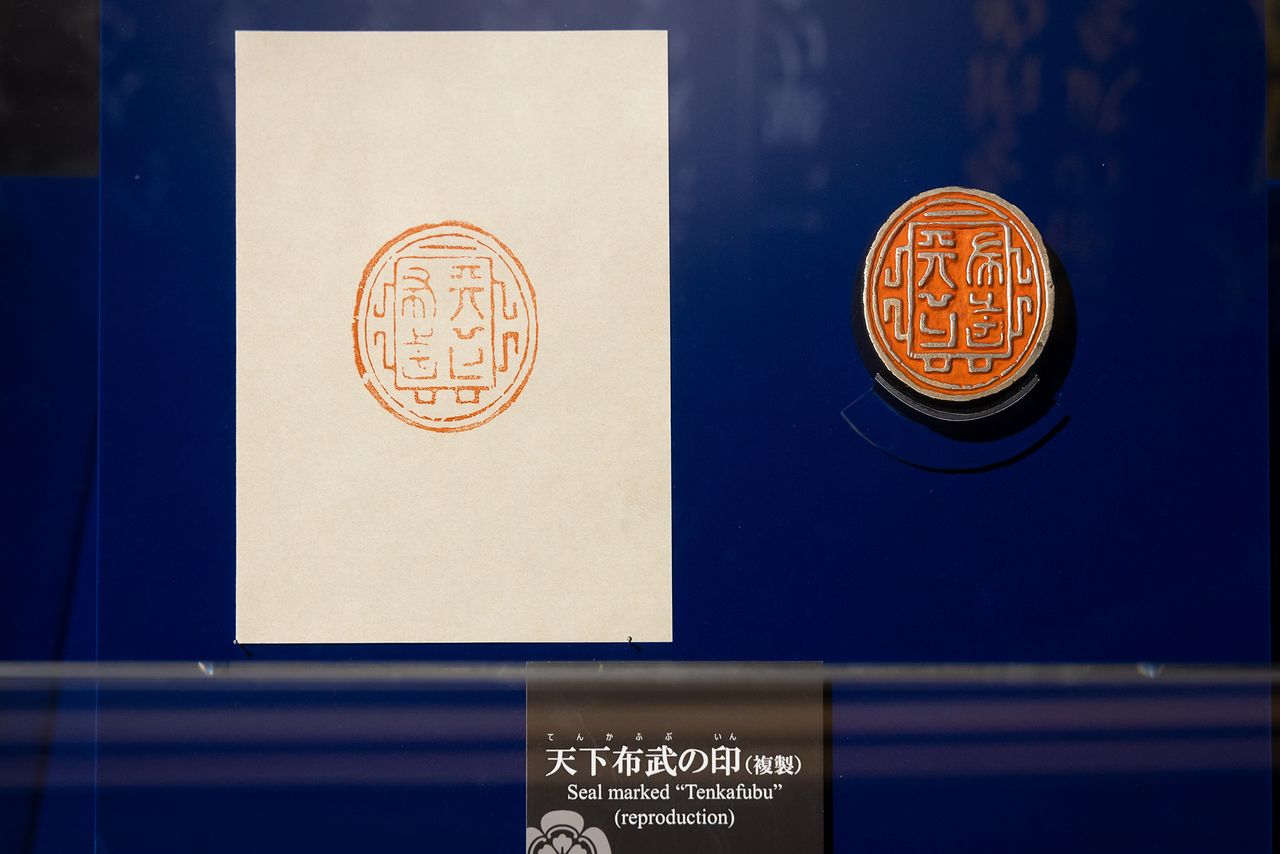 In addition to his military exploits, Nobunaga introduced economic and social reforms that shaped the evolution of castle towns. Notably, he broke up monopolistic trade organizations known as za, enabling merchants to freely buy and sell products. He also distinguished the warrior class and created a standing army by moving samurai into castle towns on a permanent basis, while at the same time doing away with the practice of pressing farmers into service and forbidding commoners from carrying arms.

In 1576, Nobunaga moved his base to the newly constructed Azuchi Castle in Ōmi (now Shiga Prefecture), leaving Gifu Castle in the hands of his eldest son and heir Nobutada. He continued to consolidate his hold on Japan and nearly succeeded in unifying the realm when he was betrayed by deputy Akechi Mitsuhide, who launched a surprise attack on the warlord in 1582 and forced both Nobunaga and Nobutada to commit suicide in what is known as the Honnōji Incident.

Nobunaga’s deputy Hashiba Hideyoshi (later Toyotomi Hideyoshi) avenged Nobunaga by defeating Mitsuhide in battle. Hideyoshi awarded Gifu Castle to a subordinate daimyō, who would determine its fate when he sided against Tokugawa Ieyasu in the decisive Battle of Sekigahara in 1600. Following the conflict, Ieyasu ordered Gifu Castle torn down. 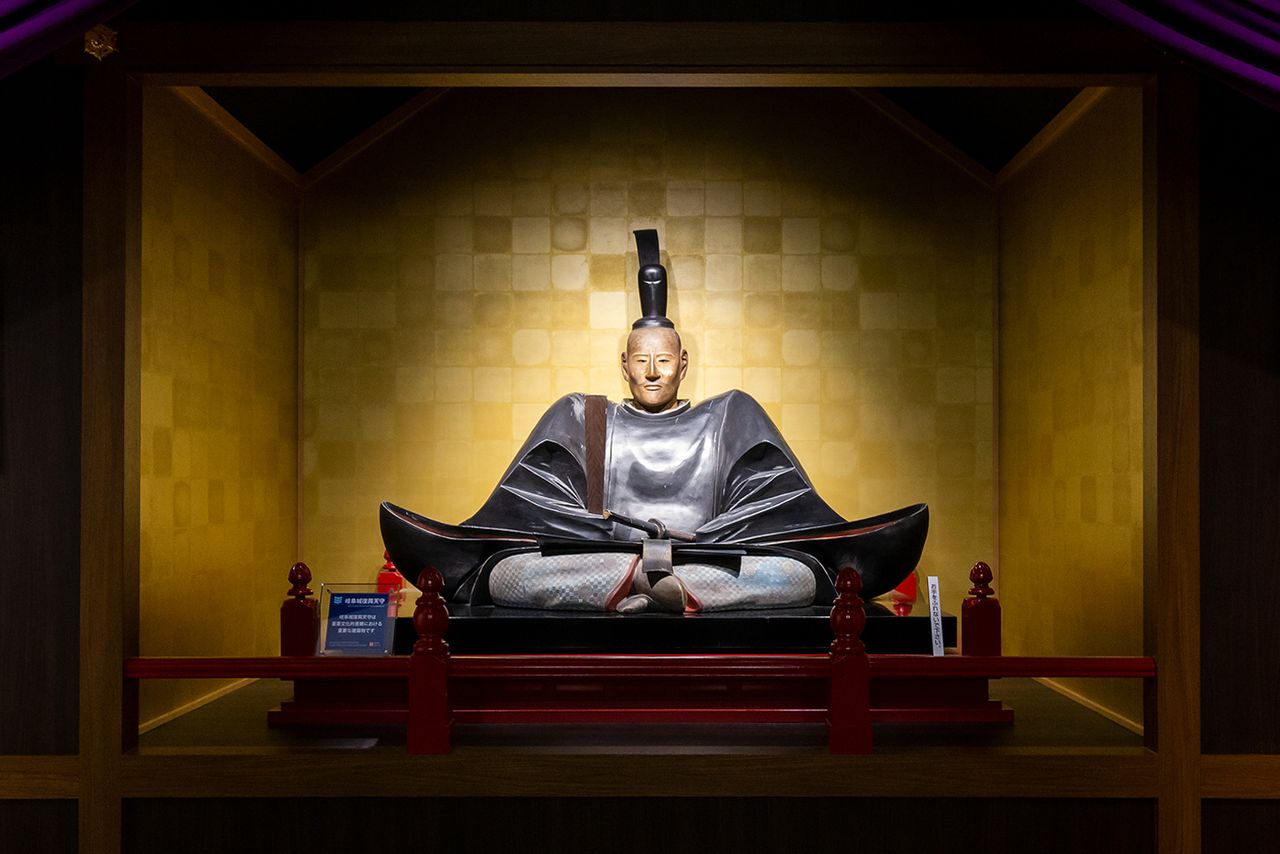 A replica of a wooden statue of Nobunaga made to commemorate the one-year anniversary of his death.

In 1910, Gifu Castle returned to its perch atop Mount Kinka when a wooden replica was built as a tourist attraction. The structure was destroyed by fire in 1943 and replaced by the current concrete keep in 1956, one year after the Kinkazan Ropeway went into service.

The Kinkazan Ropeway ascends from Sanroku Station inside Gifu Park and takes around four minutes to reach Sanchō Station at the top of Mount Kinka. From there, the three-tiered, four-story castle sets roughly a 10-minute walk away via a dedicated path. 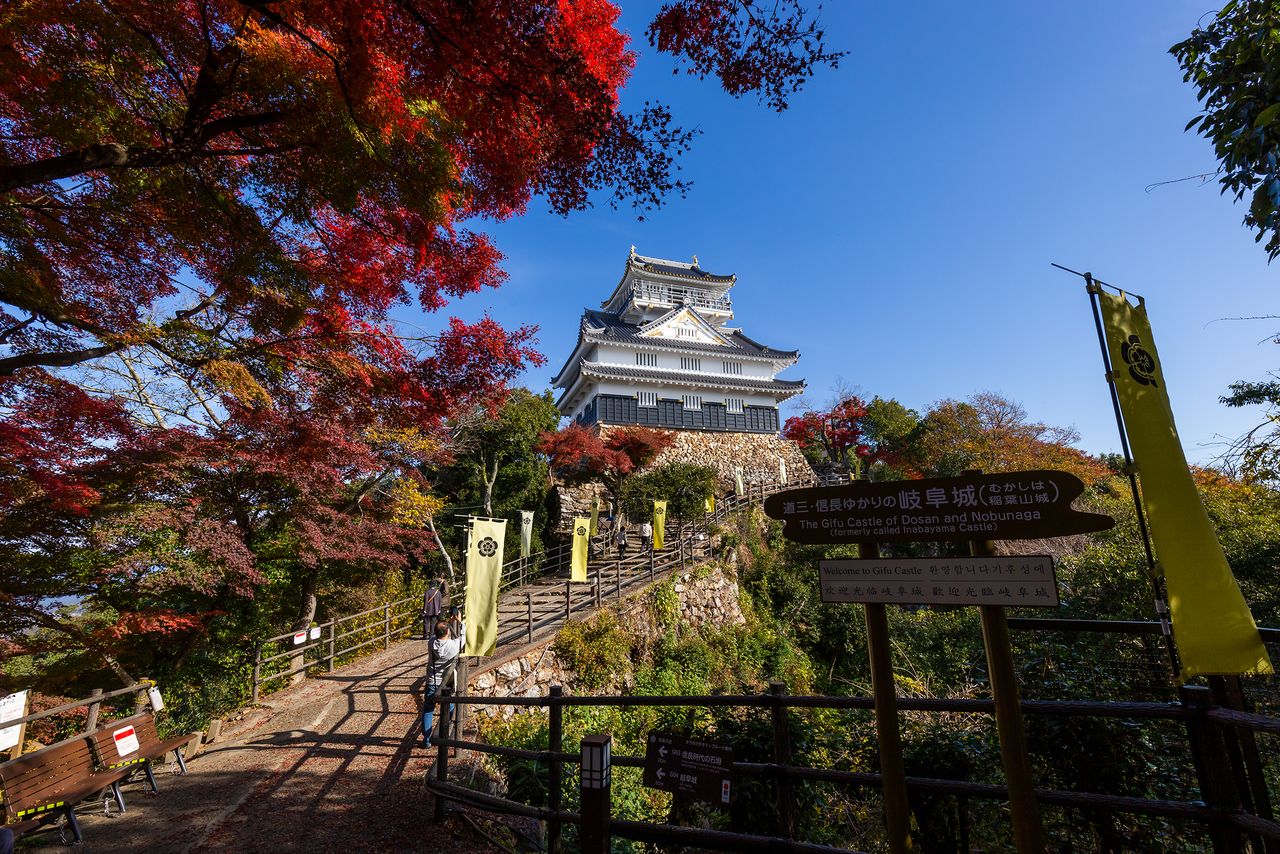 The approach to Gifu Castle at the top of Mount Kinka.

The bottom three floors of the castle house a museum with historic artifacts, models, and other displays centered around Nobunaga. The fourth and highest floor is an observation area providing a panoramic view of the city, Nagara River, and surrounding countryside. On clear days, the skyscrapers of nearby Nagoya are also visible. From the top of Gifu Castle, it is easy to imagine Nobunaga surveying the land and conspiring to bring the fractured realm under his control. 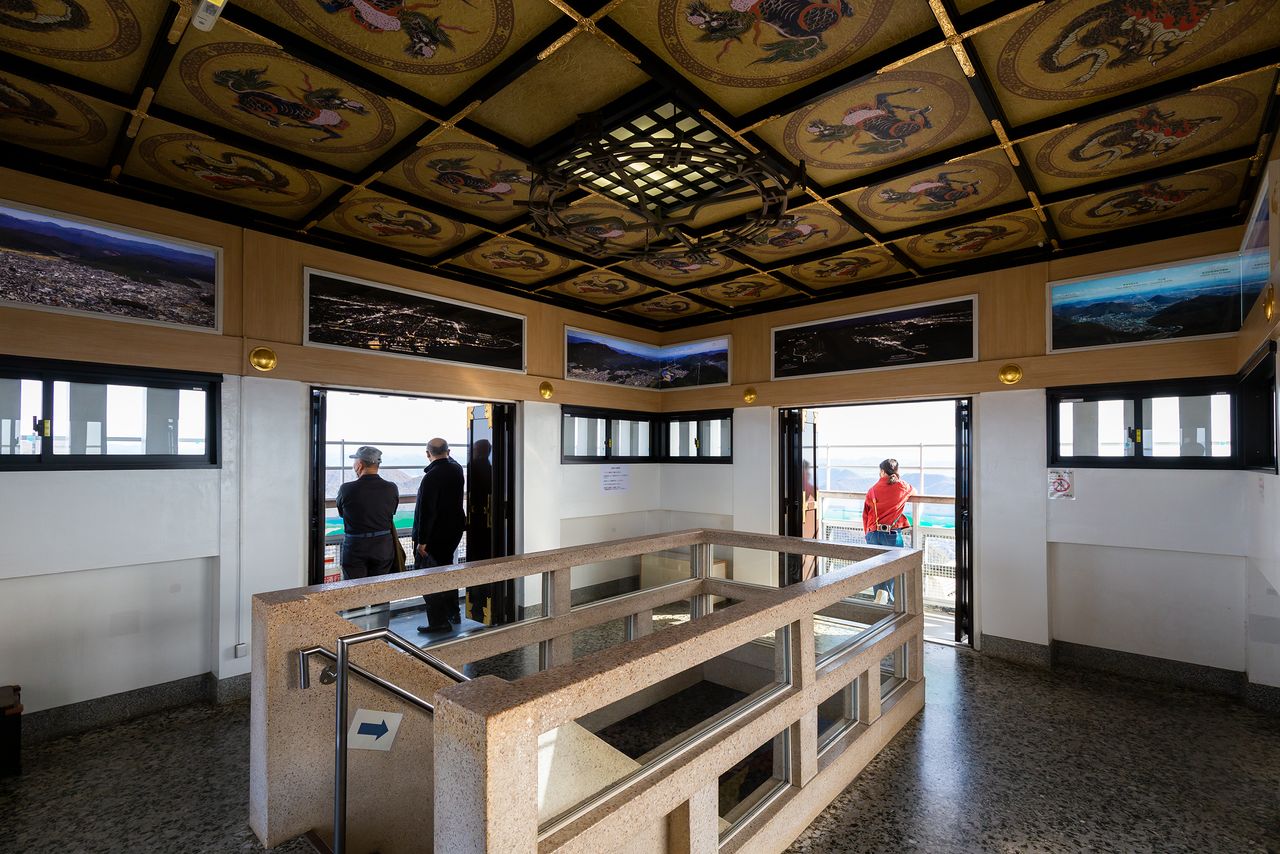 The observation floor of Gifu Castle. 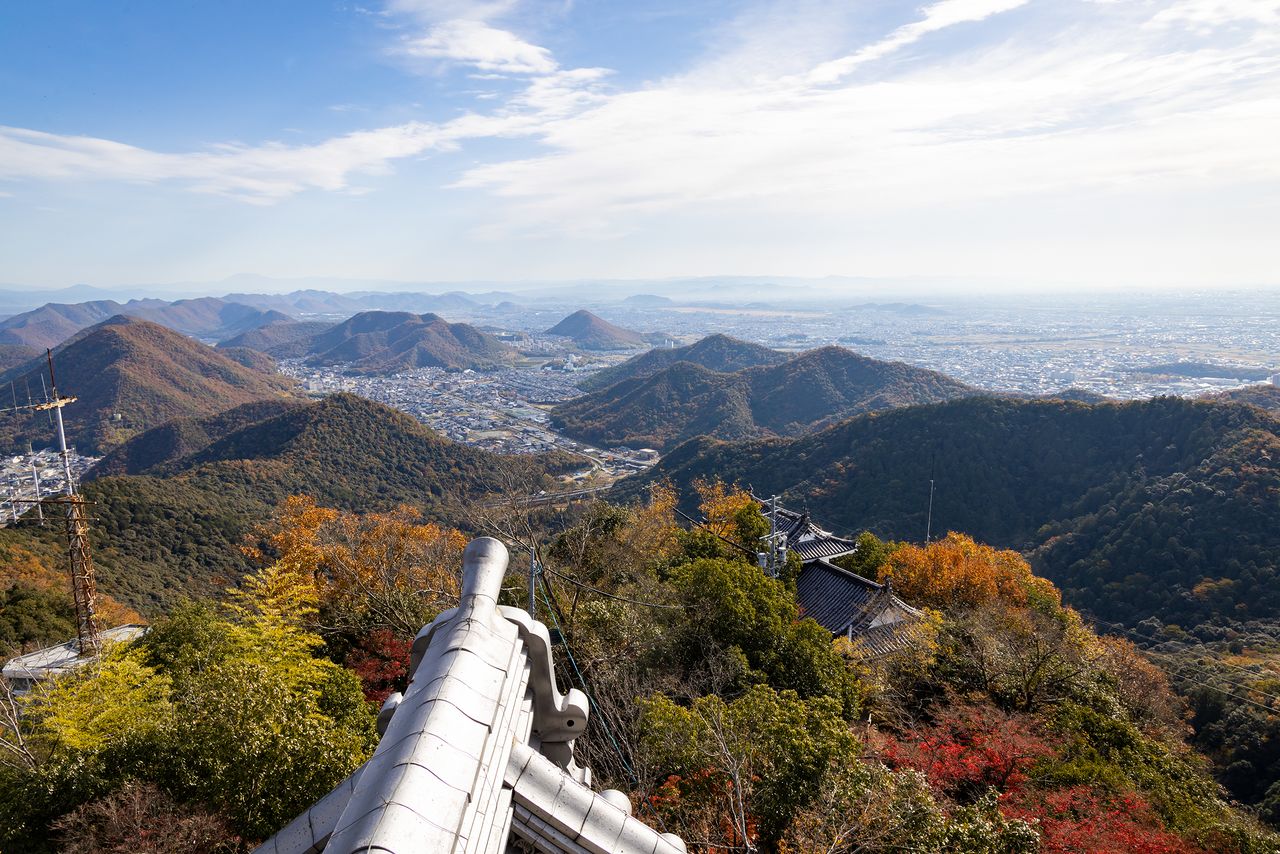 Looking east across the Nōbi Plain toward the mountains of the Southern Alps. 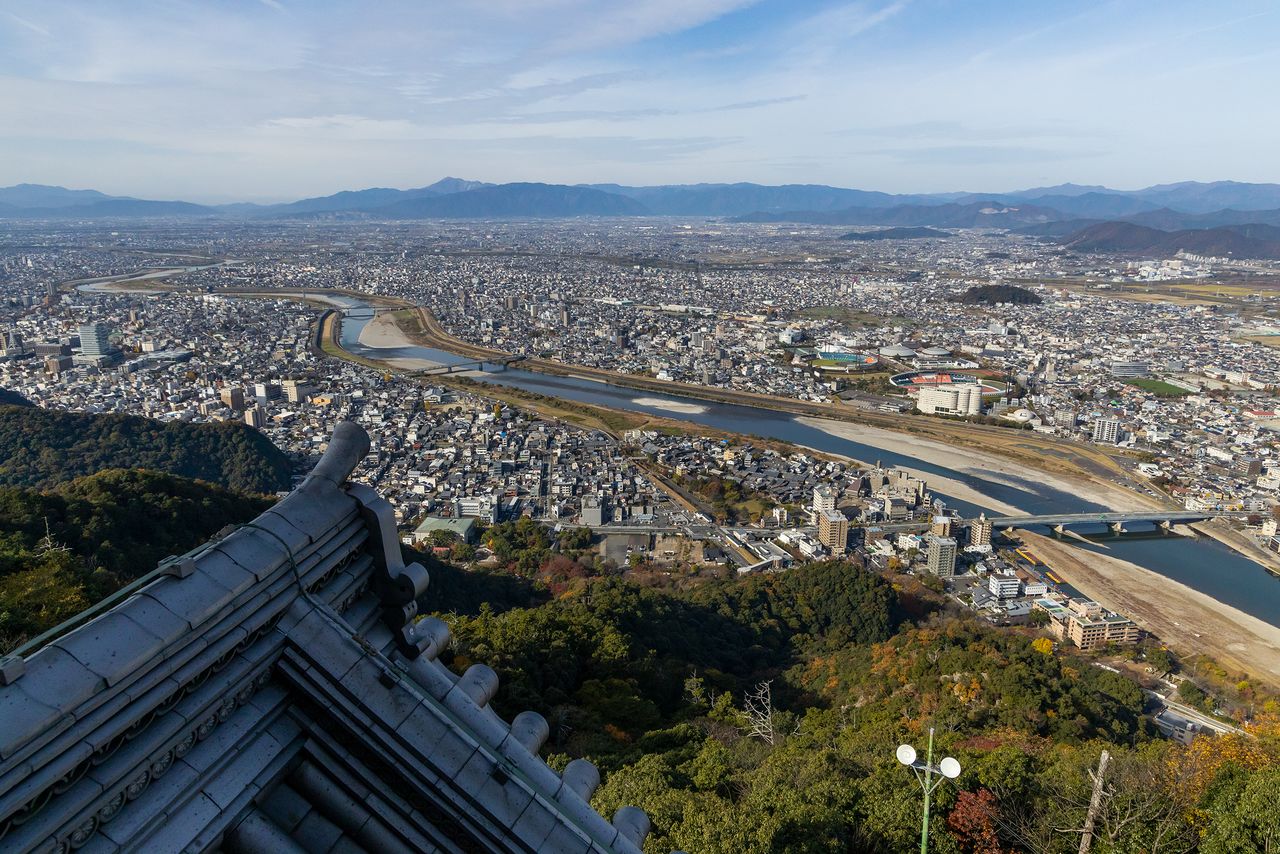 To the west, the Nagara River flows along its course. The waterway is famous for its traditional cormorant fishing boats that lure fish with fires suspended from baskets.

Although hardened history buffs might bemoan that modern materials were used to rebuild Gifu Castle, planners consulted historic documents and other records to ensure that its dimensions and outward appearance closely resemble the original fortress. The castle’s rock walls, on the other hand, are authentic, dating from the Warring States period (1467–1568). The castle museum’s assistant director recommends the view from the southern wall, which allows visitors to gaze up the stone ramparts that Nobunaga built toward the towering keep. 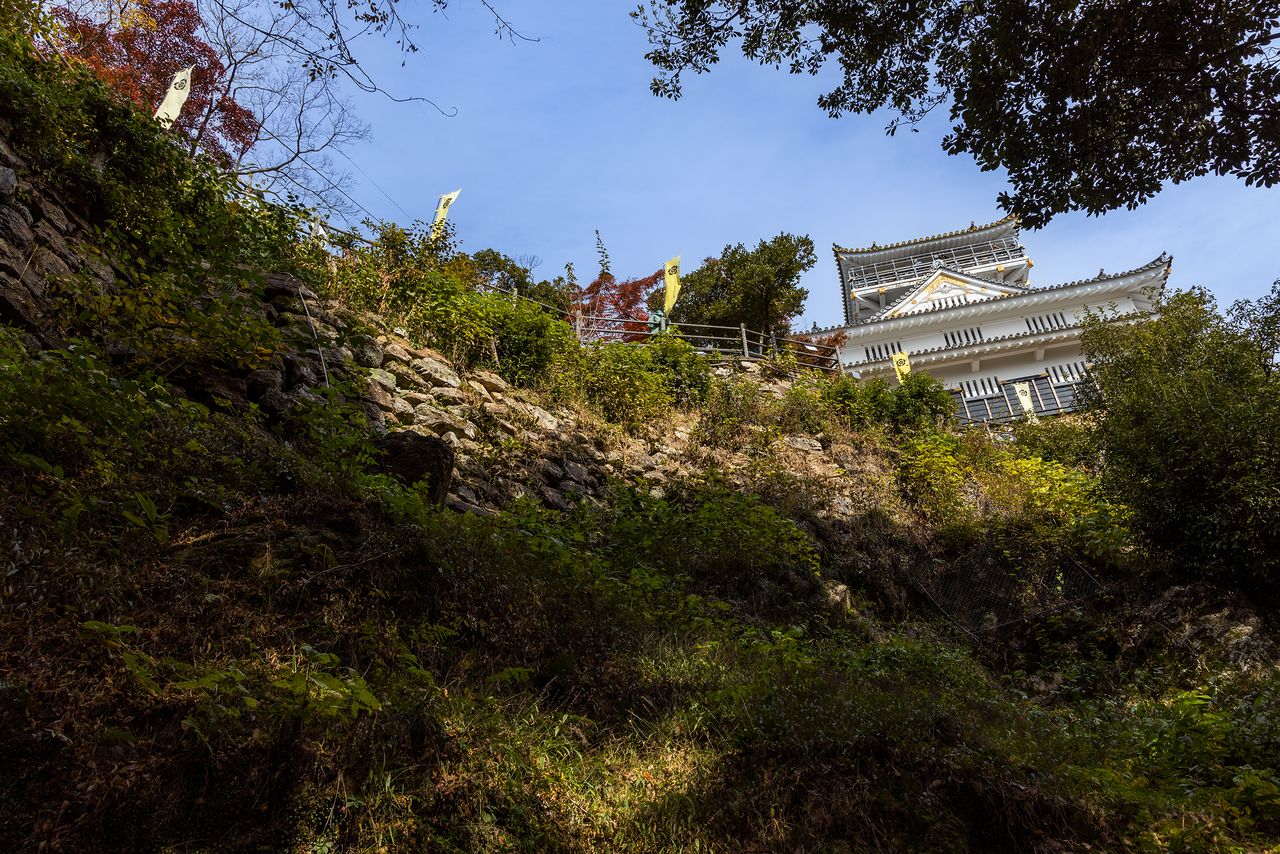 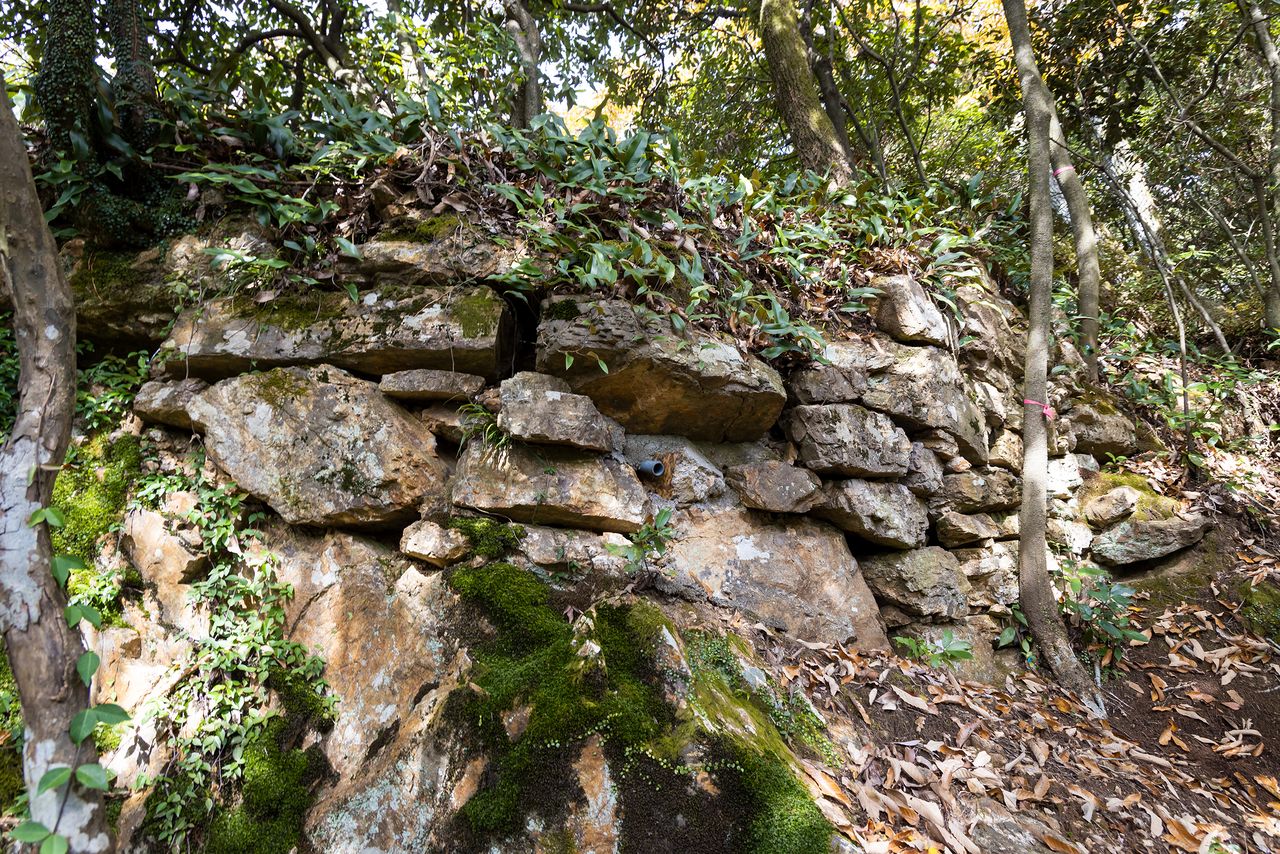 A wall near the San’nomon gate built with long, rectangular stones in a style favored by earlier daimyō Saitō Dōsan.

While Gifu Castle was an impressive fortification, Nobunaga would have spent most of his time at his residence in the bustling castle town at the base of the mountain. Records show the mansion was a splendid structure, standing four stories with massive stone walls and a sprawling garden that made use of the natural landscape. There, Nobunaga entertained guests, including the important Portuguese missionary Luis Frois, who called it Nobunaga’s palace.

Researchers started excavating the grounds of the mansion in 1984, and over the years work has uncovered a number of notable artifacts. One of the biggest findings was of decorative tiles in the shape of chrysanthemums and peonies. Analysis of these in 2012 showed that they had originally been covered in gold leaf. The discovery overturned the commonly accepted idea that Nobunaga first used such ornamental elements when building Azuchi Castle in 1576.

During the Warring States period, daimyō saw keeps as strictly defensive structures. However, Nobunaga shifted this functional view by incorporating decorative aspects, turning castles into symbols of a warlord’s authority and wealth. The discovery of gold-leafed tiles at Gifu Castle shows that Nobunaga had embraced the revolutionary idea earlier than previously thought. 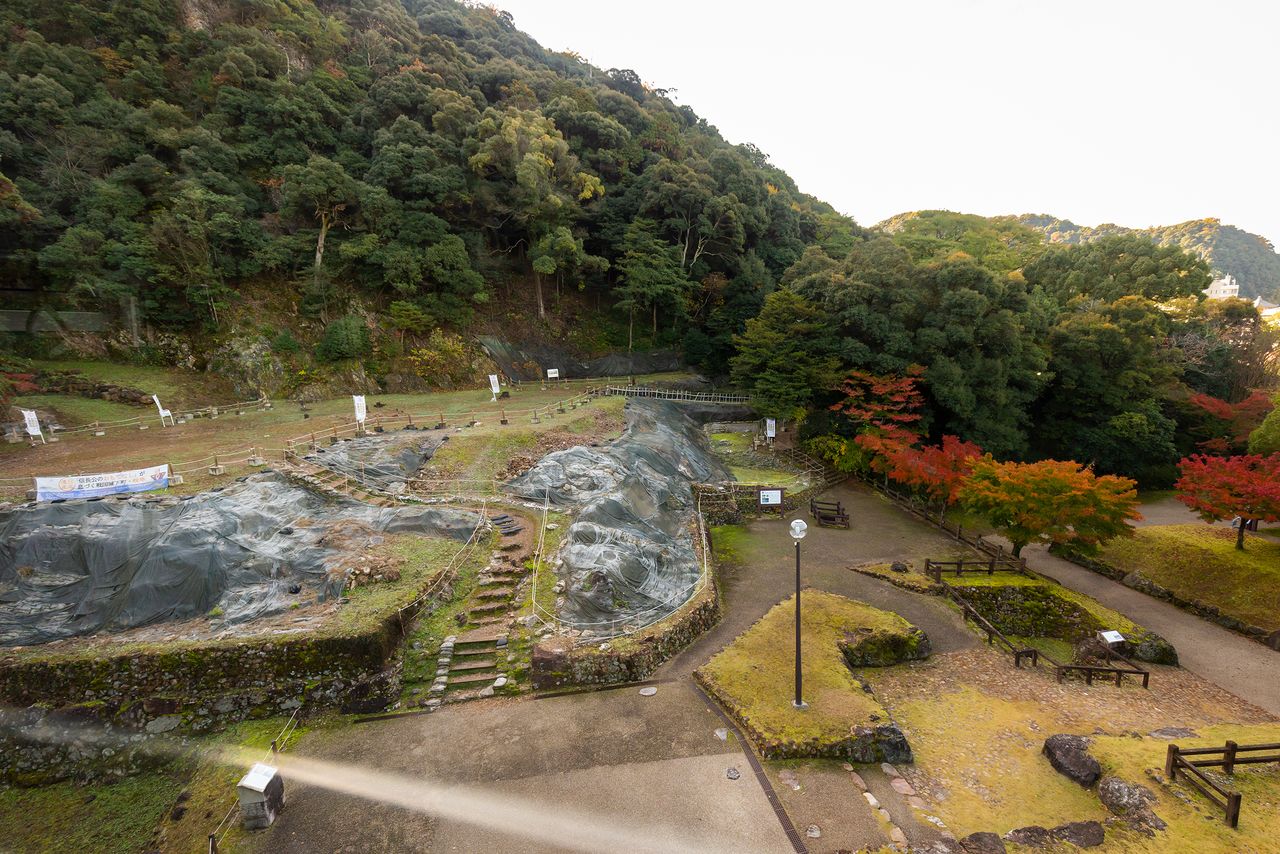 The remains of Nobunaga’s mansion, seen from the ropeway. 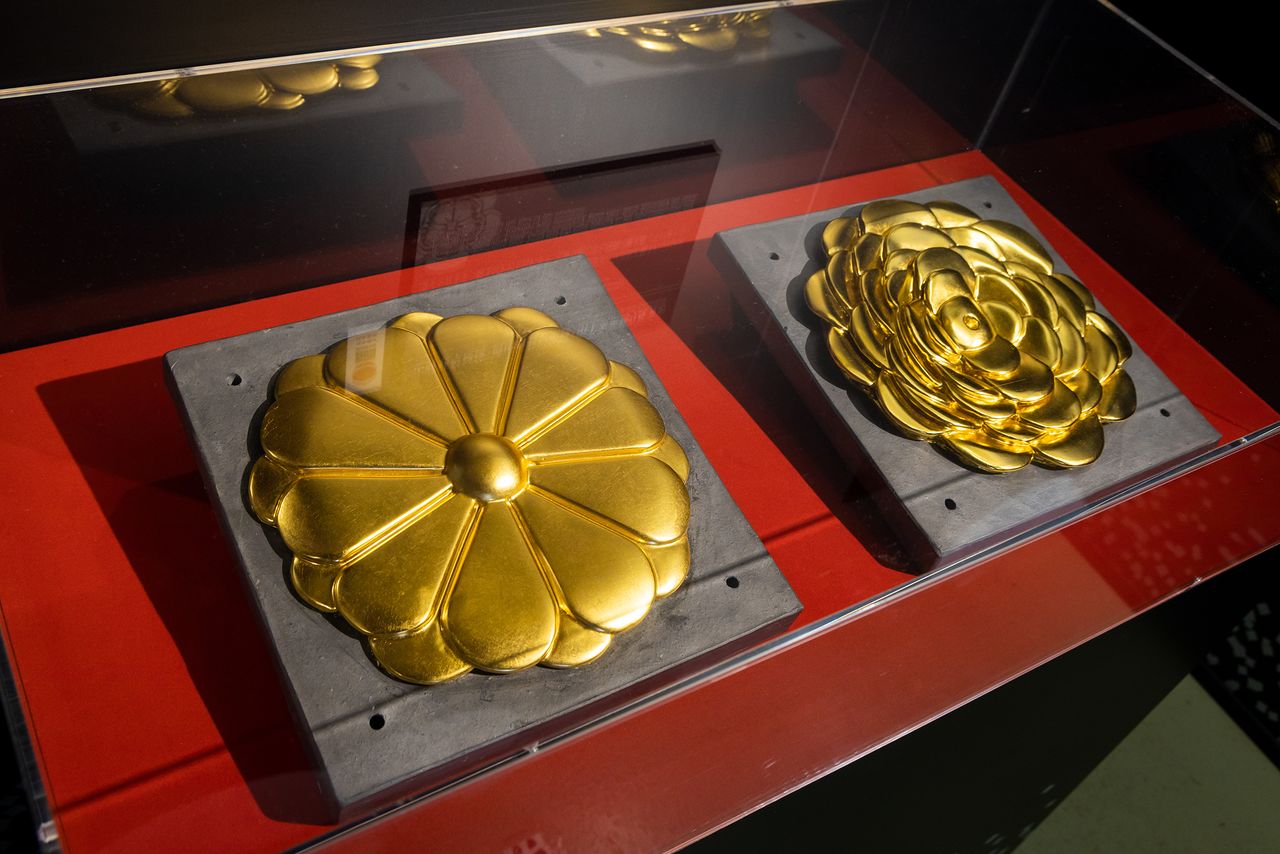 Replicas of Nobunaga’s gold-leafed tiles on display at Gifu Castle.

Many of the cultural aspects and traditions that arose in Nobunaga’s castle town, which Frois compared to both a paradise and Babylon, have been passed down and are still observed today. Most representative of these is cormorant fishing.

A hint of the old town remains along the Kawaramachi historic street that stretches from Gifu Park to the landing for cormorant fishing boats on the Nagara River. In the past, the lane bustled with wholesalers hawking goods like lumber brought down the river and washi (Japanese paper) from Oku-Mino that helped the castle town prosper. Several traditional buildings still stand, some of which house shops offering traditional crafts such as Japanese umbrellas, paper lanterns, and uchiwa fans made with Mino washi.

Whether visiting the keep on Mount Kinka or strolling through the streets of the castle town, Nobunaga’s legacy as a military commander and political and social reformer lives on. 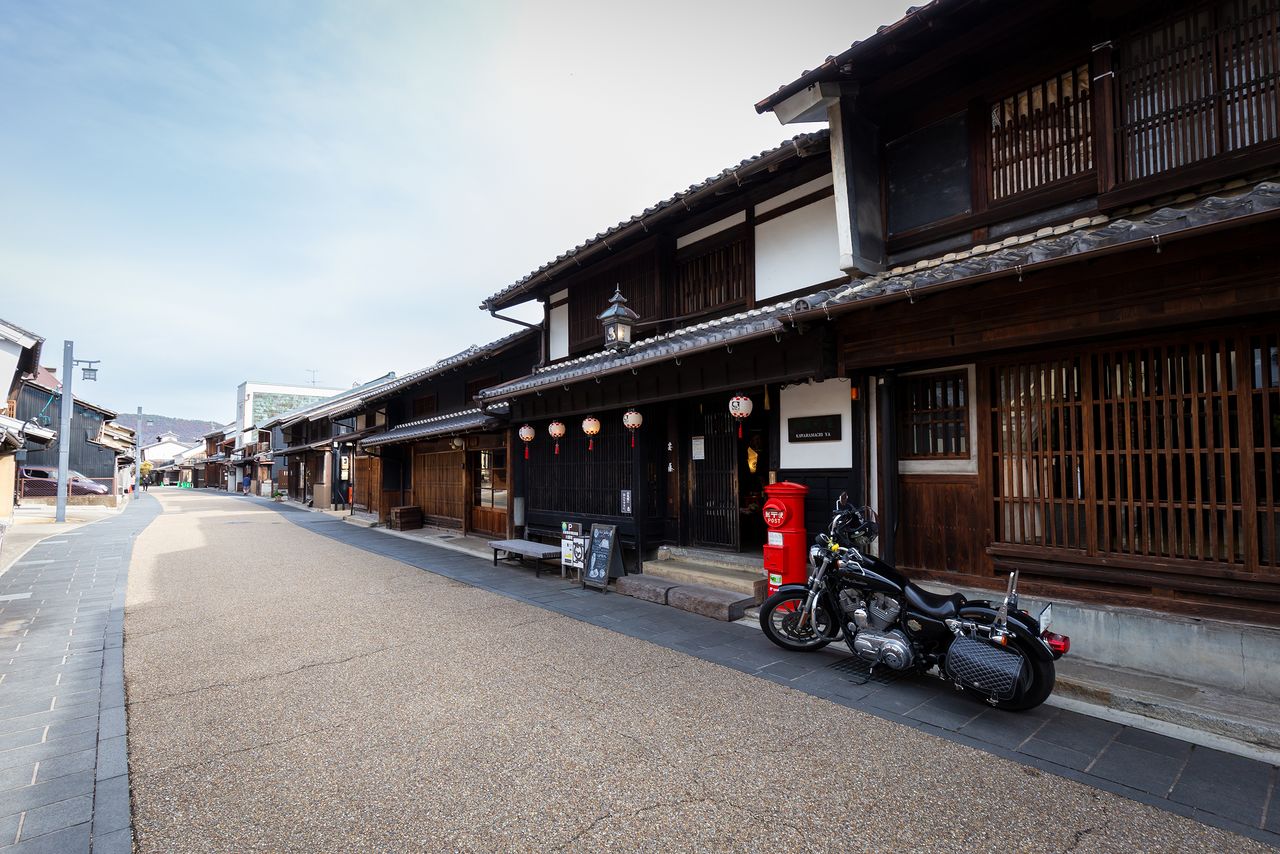