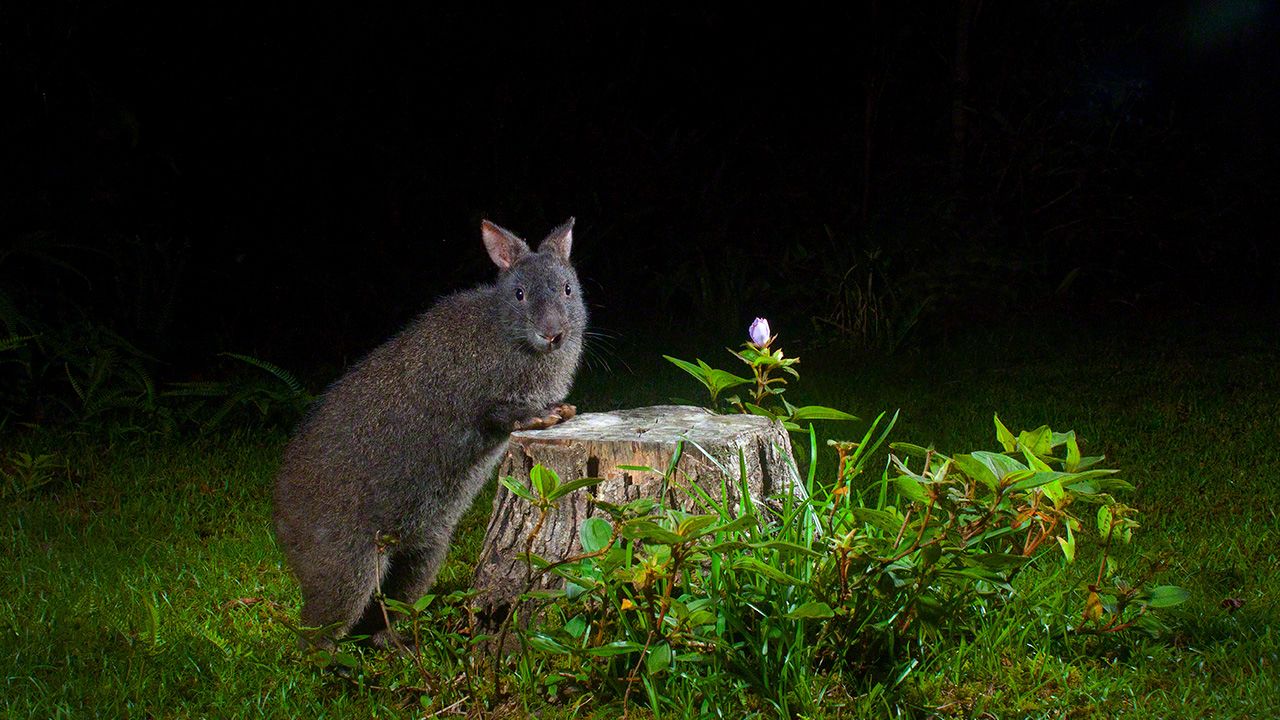 The Amami Rabbit: A Living Fossil in the Wilds of Amami Ōshima

Environment Jan 1, 2023
The dark-furred Amami rabbit is the last remnant of a primitive rabbit species that once populated the Asian mainland. Endangered, it is found only on the southern islands of Amami Ōshima and Tokunoshima in Kagoshima Prefecture. A photographer who has documented the rabbits for four decades shares his insights into these “living fossils.”

The Amami rabbit is one of the most recognized of Amami Ōshima’s many native creatures. Although I grew up on the island, I knew embarrassingly little about the animal. For instance, in 1921 it was the first ever species to be designated by the Japanese government as a natural monument. I only learned this, though, when Prince Philip, the Duke of Edinburgh, visited Amami Ōshima in October 1984 in his capacity as president of the World Wildlife Fund.

The late Duke of Edinburgh traveled to the small island in southern Kagoshima Prefecture to observe the rabbit, a descendent of an ancient subgroup that once roamed the Asian mainland. Reading of Phillip’s visit in the newspaper, I was moved by his expression of hope that conservation work would continue to protect the island’s environment, home to what he called one of the world’s rarest rabbits. To have such a renowned figure express concern for the tiny creature opened my eyes to the plight of the Amami no kurousagi, as the animal is known in Japanese.

In the summer of 1986, I made my first excursion into the wilds of Amami Ōshima to see for myself if the Amami rabbit really was as special as people said. This proved to be a life-changing experience. Setting out at night by car with my family in tow, I had been driving for around an hour along a rough mountain road when a black lump with glowing ruby eyes appeared in the vehicle’s headlights. Stepping onto the road, I slowly approached the animal, which at closer inspection revealed itself to be a dark-furred rabbit. After a moment, it suddenly dawned on me what I was staring at. Breaking out in goosebumps, I shrieked, “an Amami rabbit!” It was a moment I will never forget. 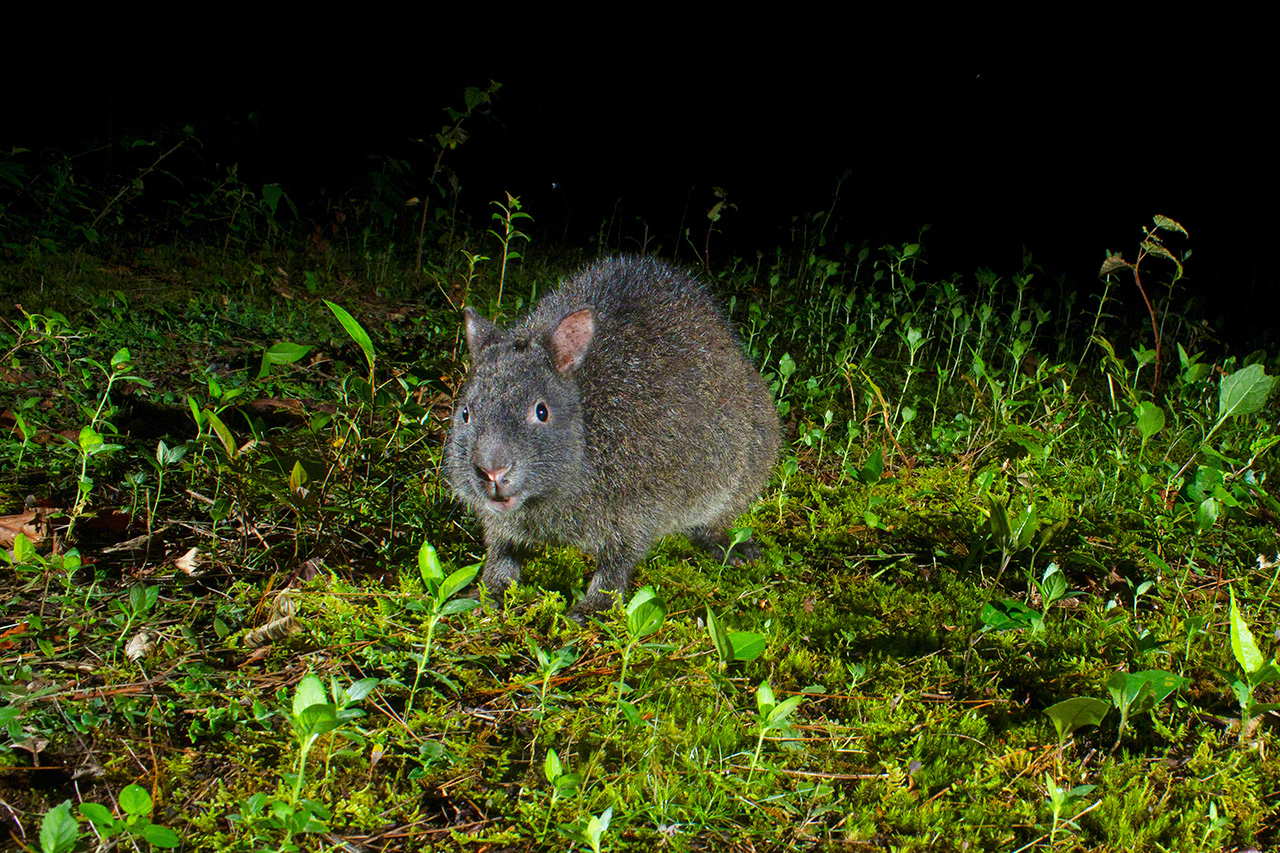 An Amami rabbit stares back at the camera.

I had left Tokyo and returned to Amami Ōshima intent on finding my calling as a photographer. But after six years, I had yet to find a suitable subject, which had left me feeling despondent and uncertain about my decision to move home. Coming across an Amami rabbit was like a shock to my system. Mesmerized by the experience, I started making regular forays into the island’s dense woodlands to photograph the creature.

At the time, the primeval forests of Amami Ōshima were full of dangers, both real and imagined. Anyone foolhardy enough to go trekking through the underbrush at night risked crossing paths with the dreaded habu (yellow-spotted pit viper) or arousing the ire of the kenmun, supernatural creatures similar to kappa thought to inhabit the island’s interior. I was heading into uncharted territory with the Amami rabbit, as few studies had been made into the ecology and behavior of the nocturnal animal. What information there was tended to be rudimentary—such as that it had short legs and ears, was dark colored, and sheltered in burrows in rocks or the ground—and had largely been gleaned from chance nighttime sightings along forestry access roads.

Despite having no experience photographing animals in the wild, from that summer on, I spent night after night scanning the undergrowth, telling myself that documenting the Amami rabbit would be my life’s work. With each outing, I fell deeper under the animal’s spell. I had to teach myself from scratch how to be a wildlife photographer, but my efforts were eventually rewarded when in December, six months after my first riveting roadside encounter, I discovered a rabbit’s burrow.

Setting about to document the creature’s behavior, I managed after a fair amount of trial and error to photograph the rabbit leaving its lair in early January 1987. This triumph spurred me to unearth more of the animal’s secrets, such as how it spent its days and cared for its young. Driven by these and other questions, I penetrated deeper and deeper into the island’s dense subtropical forests, where I discovered a remarkable world inhabited by a myriad of seasonally changing flora and fauna. 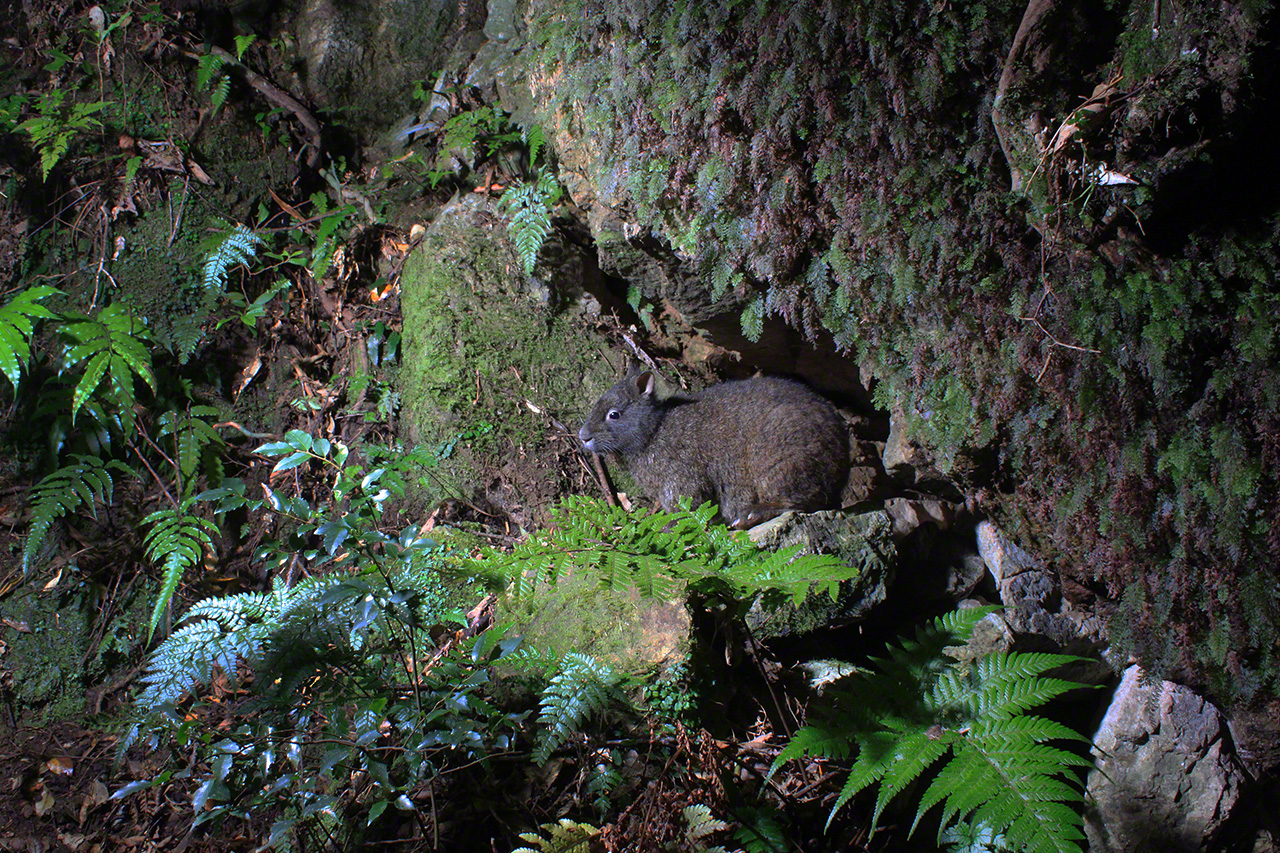 After many failed attempts, the author finally succeeded in snapping this photograph of an Amami rabbit leaving its burrow.

In time, my senses grew more attuned to the surrounding environment. When in the autumn of 1996 I came across a patch of disturbed soil, I immediately recognized it as an Amami rabbit’s nest, having had these described to me by an older island resident knowledgeable about the forest. 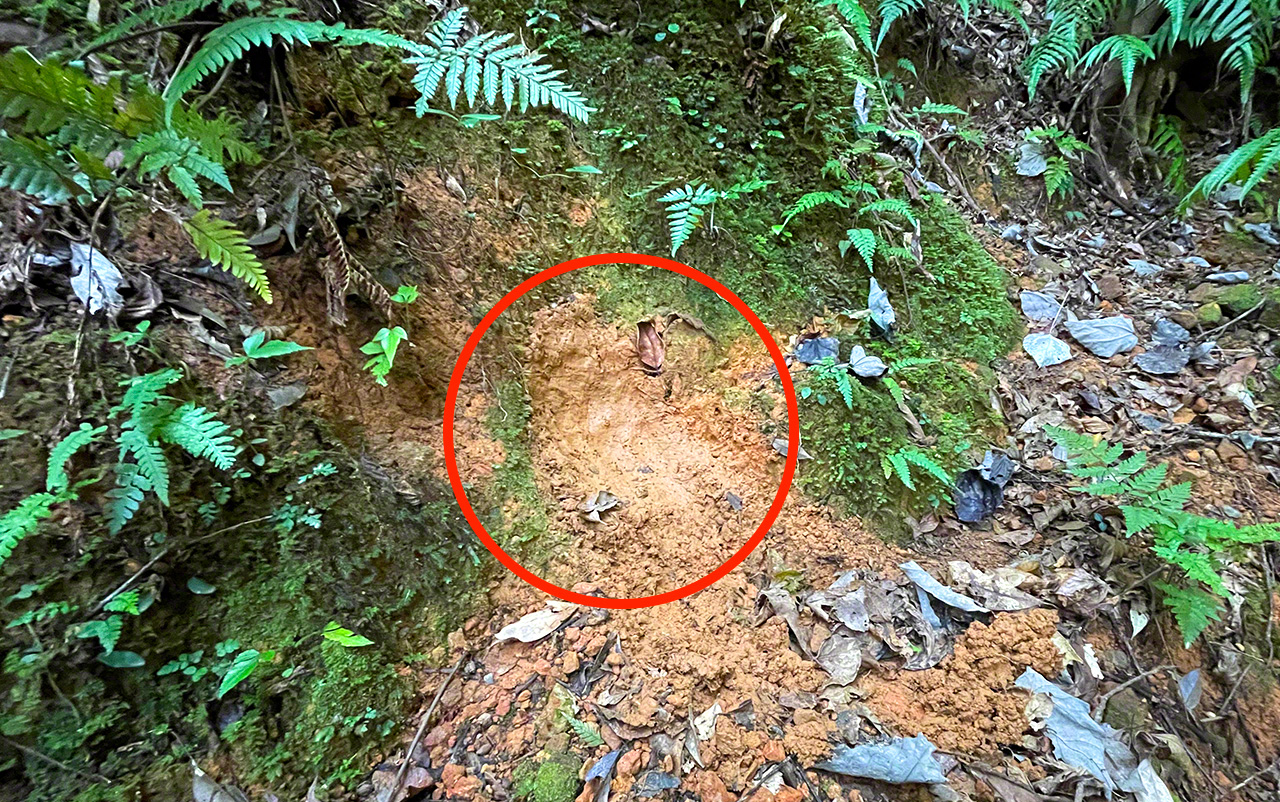 A section of disturbed soil indicates the entrance to a rabbit’s nest. The mother rabbit covers the opening of the nest with dirt to hide her offspring from predators like habu; the baby rabbits remain quietly there until she returns two days later.

Presented with an opportunity to pull the veil back on the nesting habits of Amami rabbits, I set about to record this previously undocumented aspect of the creature’s behavior. Capturing the brief interactions between mother and offspring, though, was no simple task.

Female Amami rabbits dig their nests in autumn away from their burrows. Once a mother rabbit has finished her nest, which is typically around 1 meter deep, she lines the bottom with leaves and gives birth to one or more kittens. She then seals the entrance of the nest with soil, returning once every two nights to feed her offspring. Suckling lasts a mere two minutes, and the mother rabbit will spend another 20 minutes resealing the entrance of the nest before disappearing back into the undergrowth. This cycle repeats for 40 days until the juvenile rabbit is big enough to leave the nest, at which time it takes up residence in its mother’s burrow.

With such a narrow window, timing was crucial. By camping out near the site for two months, I eventually succeeded in photographing the different aspects of nesting for the first time ever. 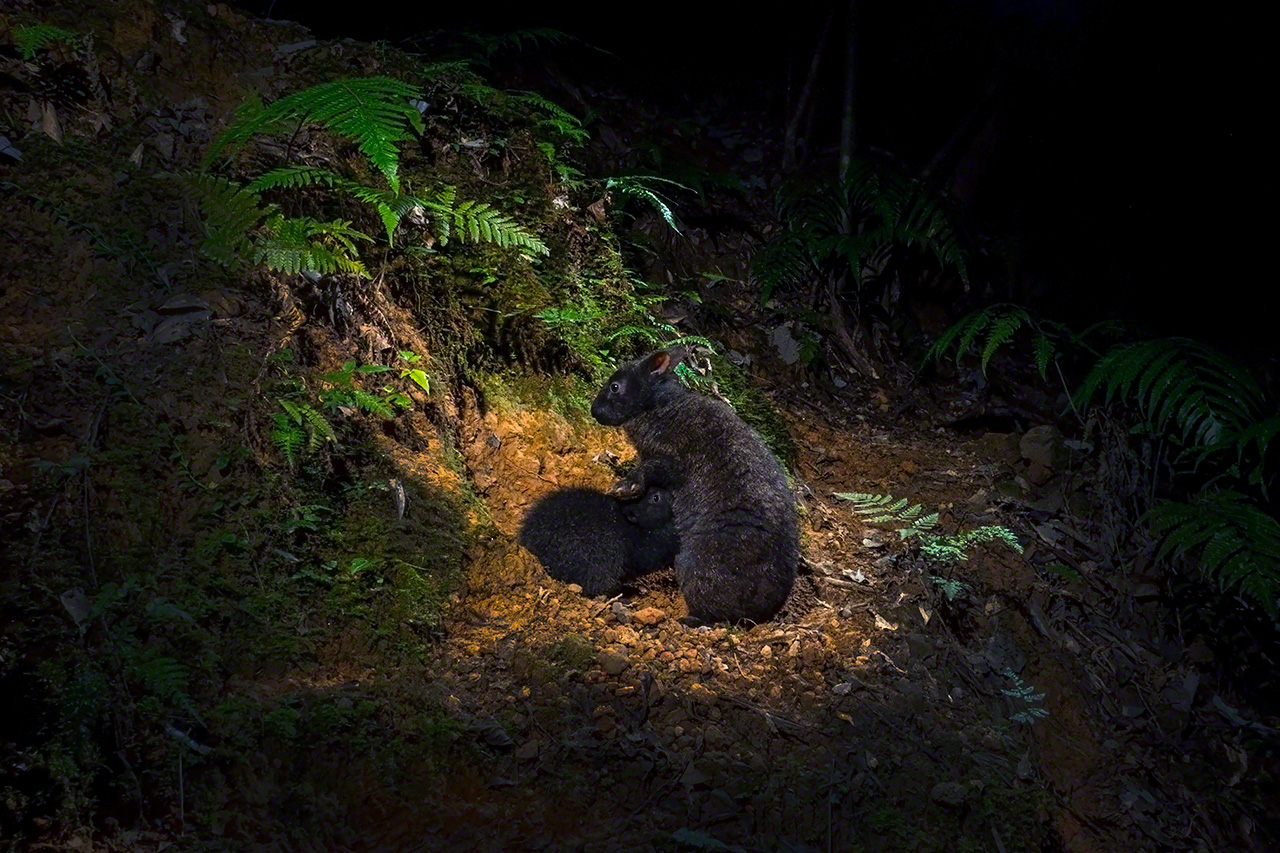 A baby Amami rabbit eagerly suckles. Feedings early on take place inside the nest, but as offspring grow, these sessions take place outside the hole. 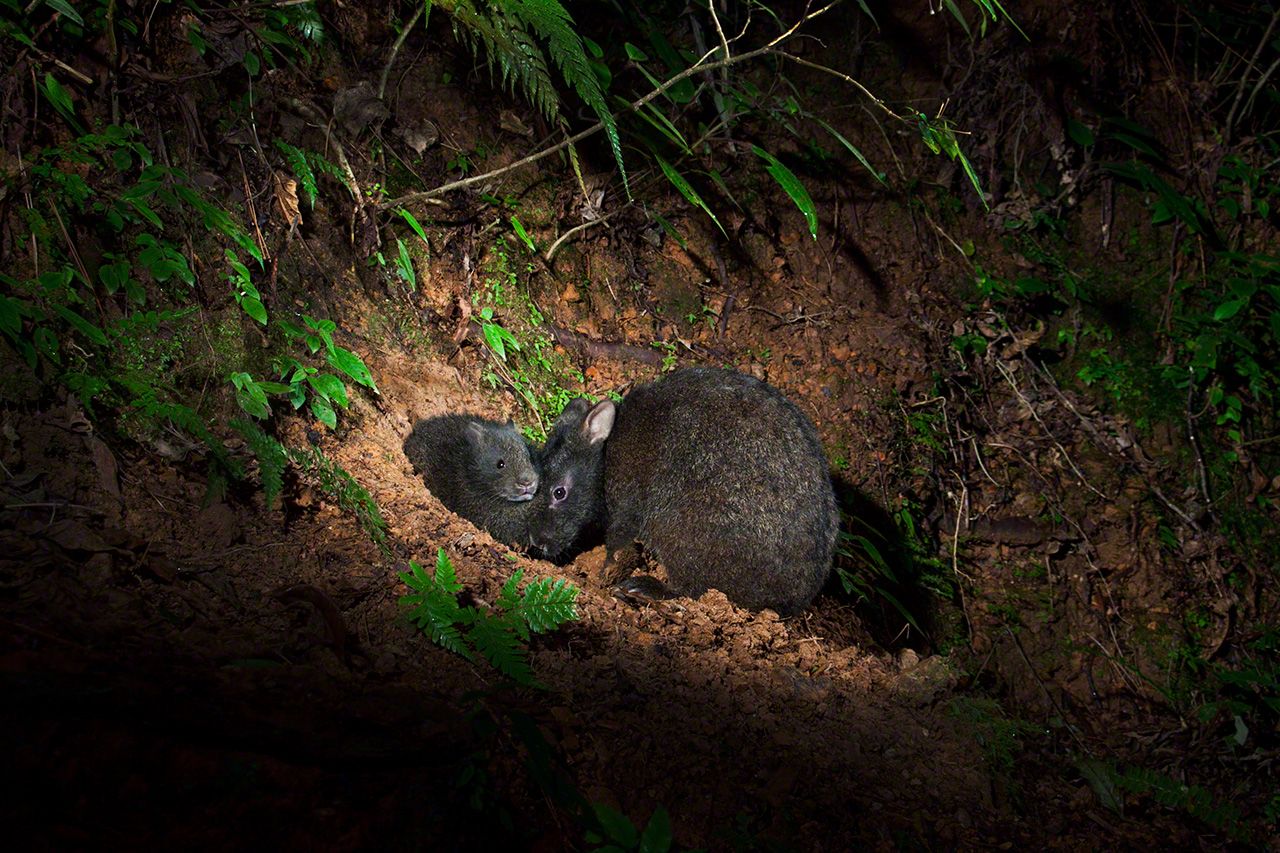 A mother Amami rabbit inspects the area around her nest while her offspring looks on.

Building on this success, in December 1998, I made the first-ever photographic and video record of the nesting habits of the Amami rabbit. The response to these images was incredible, turning Amami Ōshima from an obscure destination to a globally recognized sensation seemingly overnight. Esteemed magazines like the BBC’s Wildlife and National Geographic published features on the island, and experts penned papers on Amami’s flora and fauna for acclaimed international academic journals. 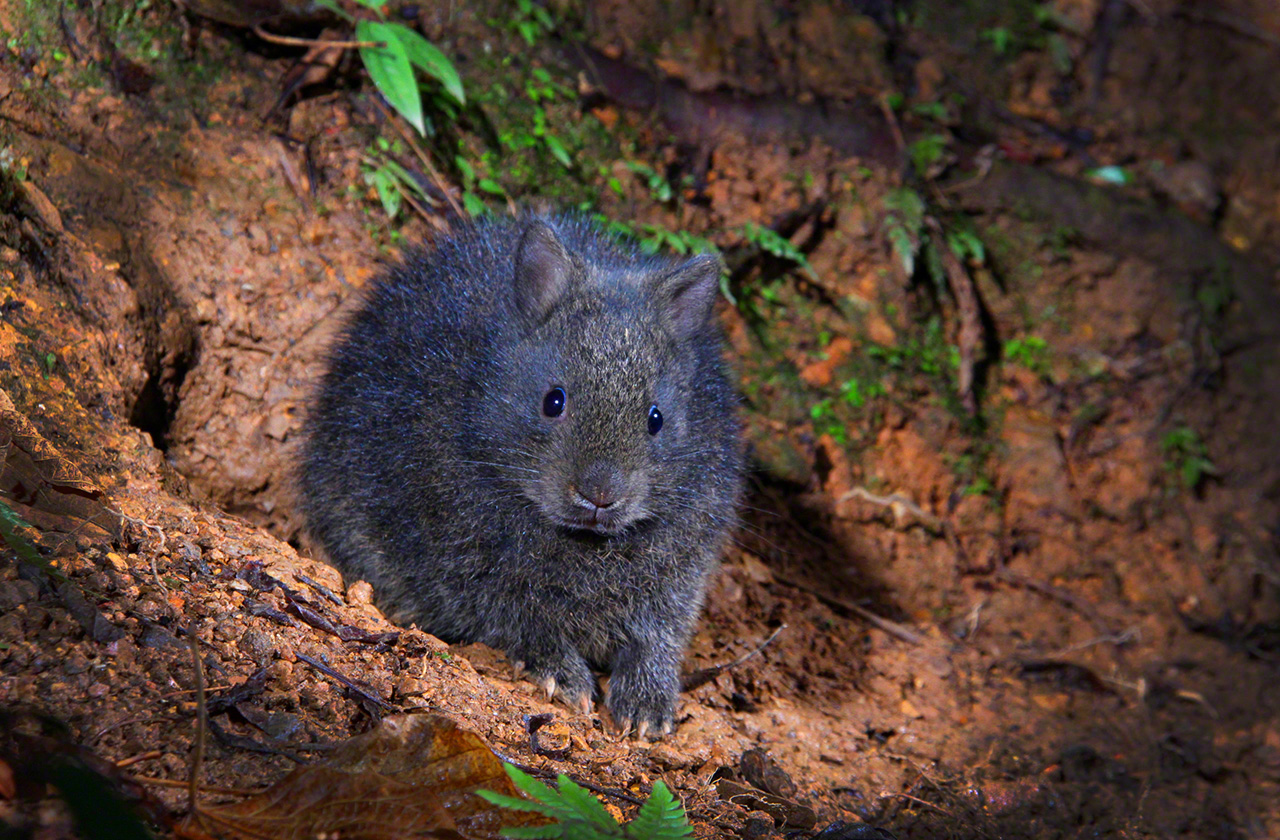 A juvenile Amami rabbit waits for its mother outside its nest. As a kitten prepares to leave its nest, it will emerge on its own and move around the surrounding area. Once a mother rabbit determines that her offspring has matured enough, she will lead it to her own burrow.

In 2021, efforts to protect the Amami rabbit and other species received an enormous boost when Amami Ōshima and neighboring Tokunoshima, which also supports a population of rabbits, were among a group of southern Japanese islands registered as UNESCO World Natural Heritage sites. This was an honor beyond my wildest imagination. I had spent 36 years up to that point focused solely on documenting the behavior of the Amami rabbit and the richness of its forest habitat. For my home island to receive such international recognition was beyond belief.

Amami Ōshima long suffered environmental damage at the hands of humans. Its forests were exploited as cheap sources of timber, and the introduction of the mongoose, ostensibly to control the habu population, only pushed the island’s ecosystem even closer to the brink. Despite the harm caused by such shortsighted policies, the Amami rabbit and other endangered native species have managed to hang on. I hope that through my photographs that I have had helped show others the importance of preserving these precious animals. 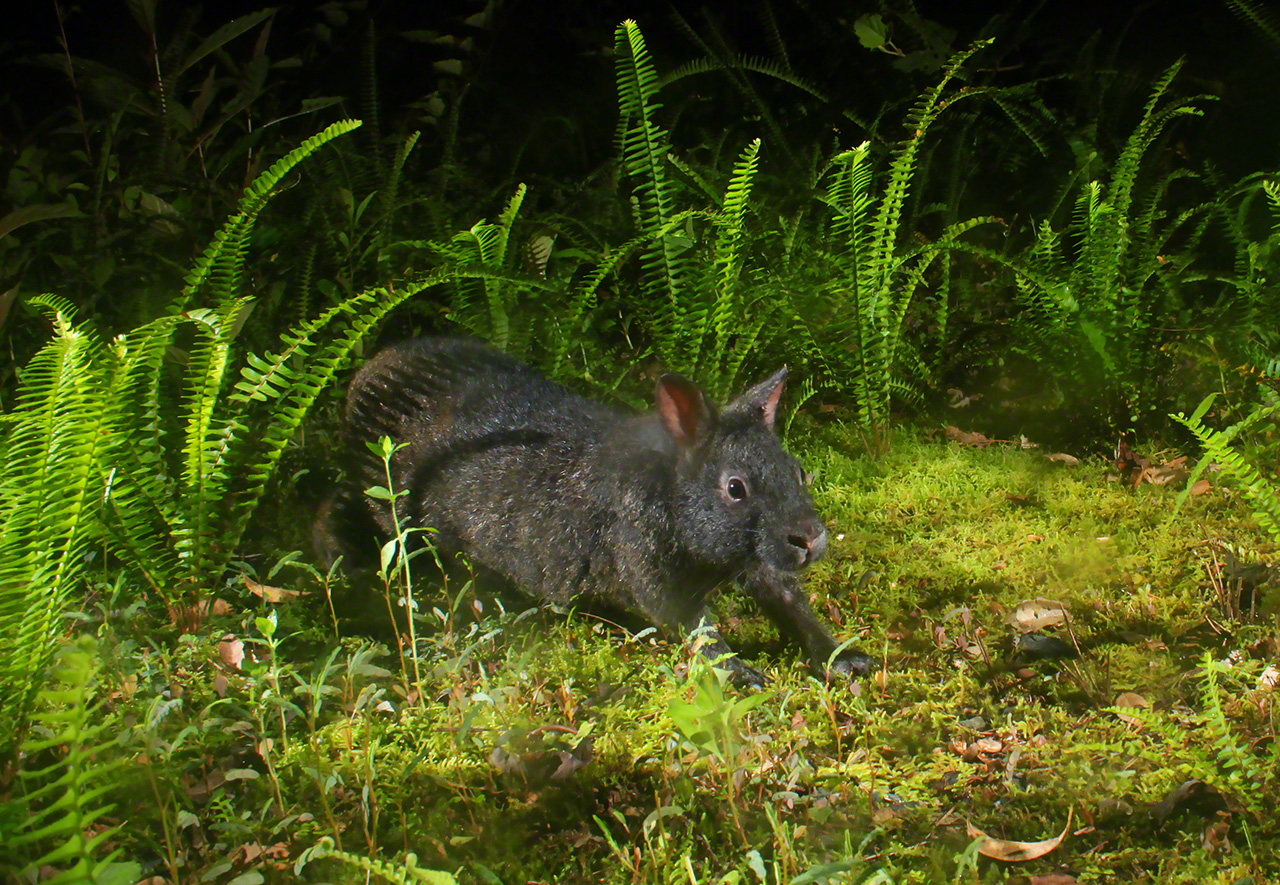 An Amami rabbit stretches in a mossy clearing. Rabbits are often pictured as round, fluffy creatures, but their bodies are quite long and slender, allowing them to fit through the narrow entrances of their burrows. 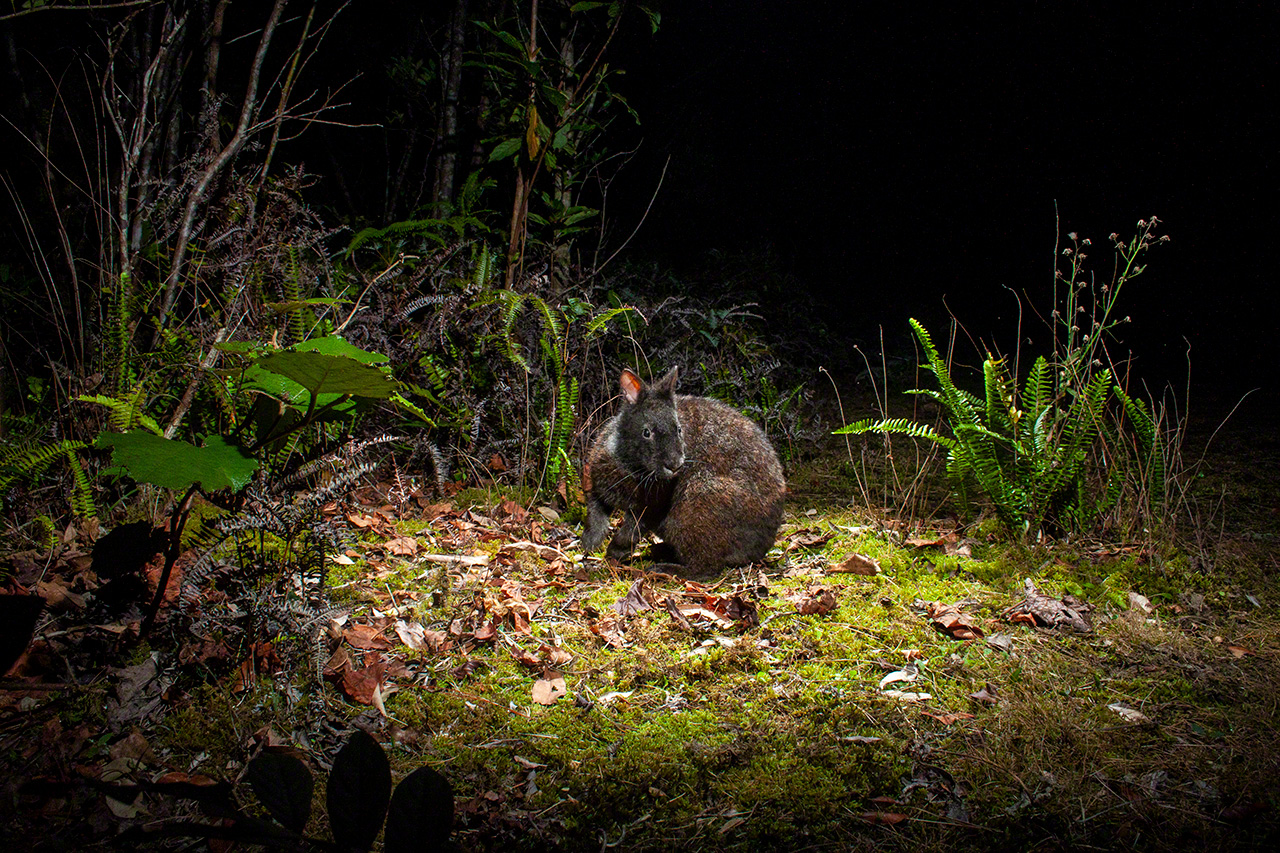 An Amami rabbit rests in a clearing. 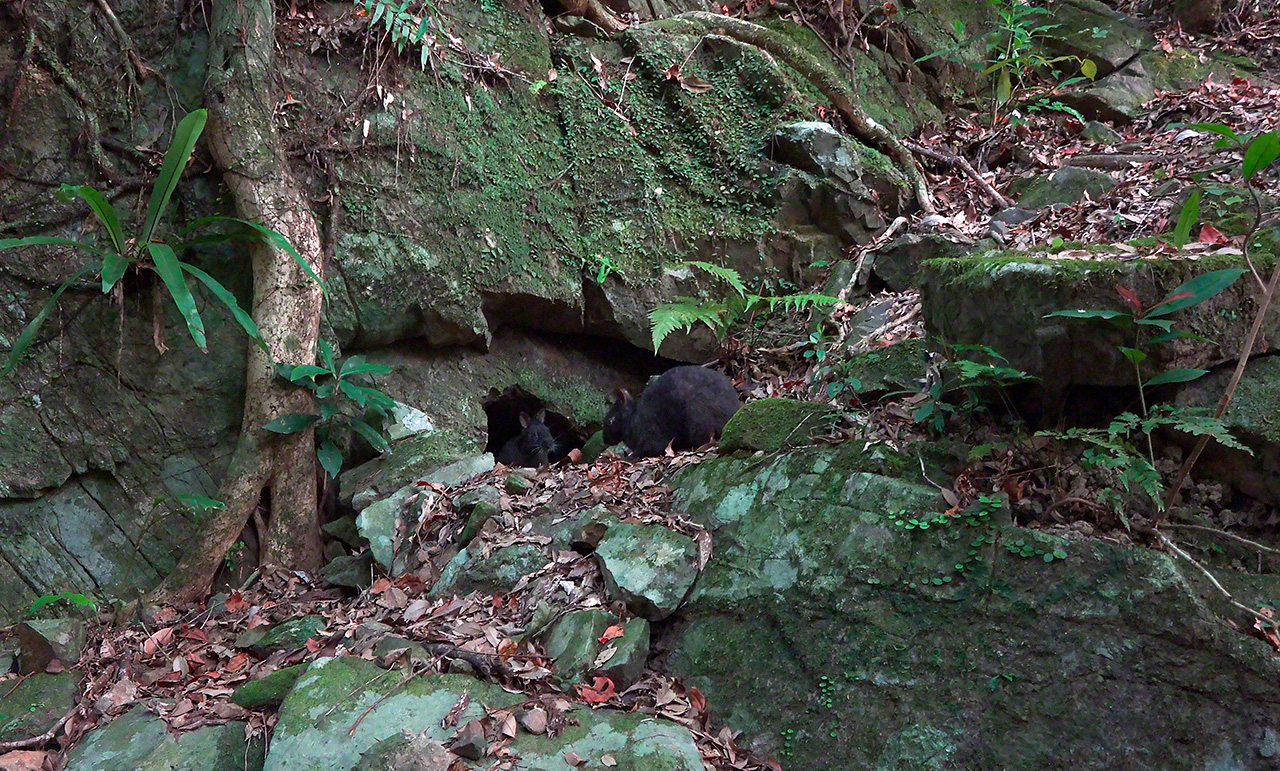 A hole in the rock face serves as a burrow. 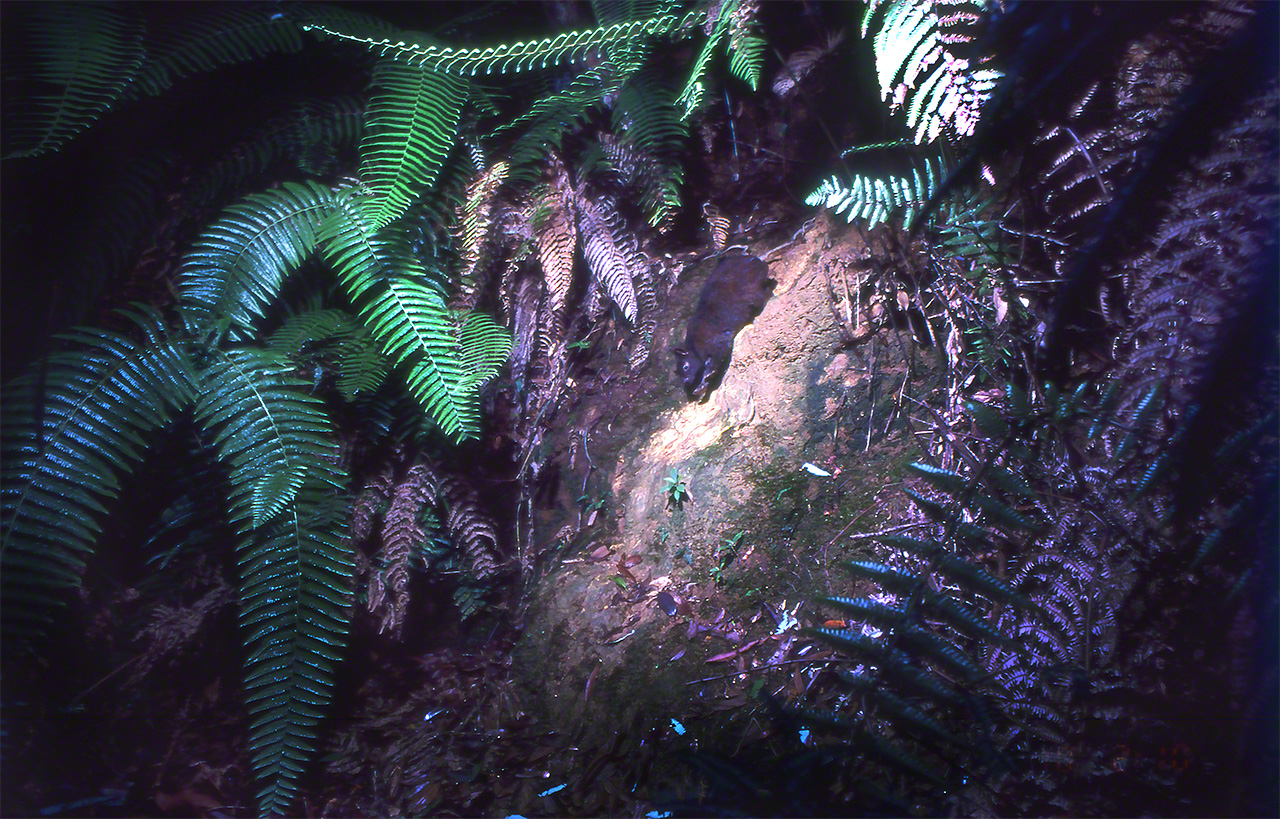 An Amami rabbit makes its way down a slope. The species has evolved long, sharp claws suited to traversing Amami Ōshima’s steep terrain. 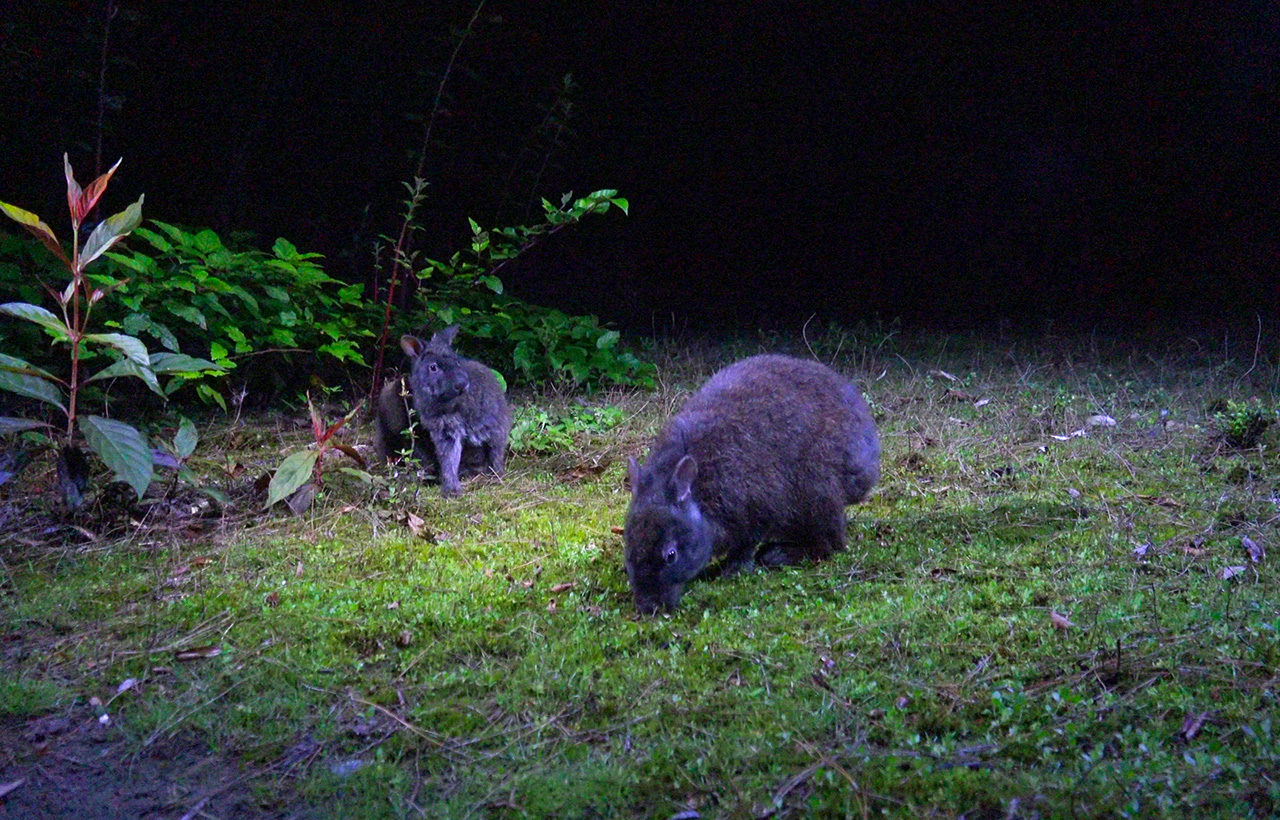 A mother and kitten graze in a clearing. 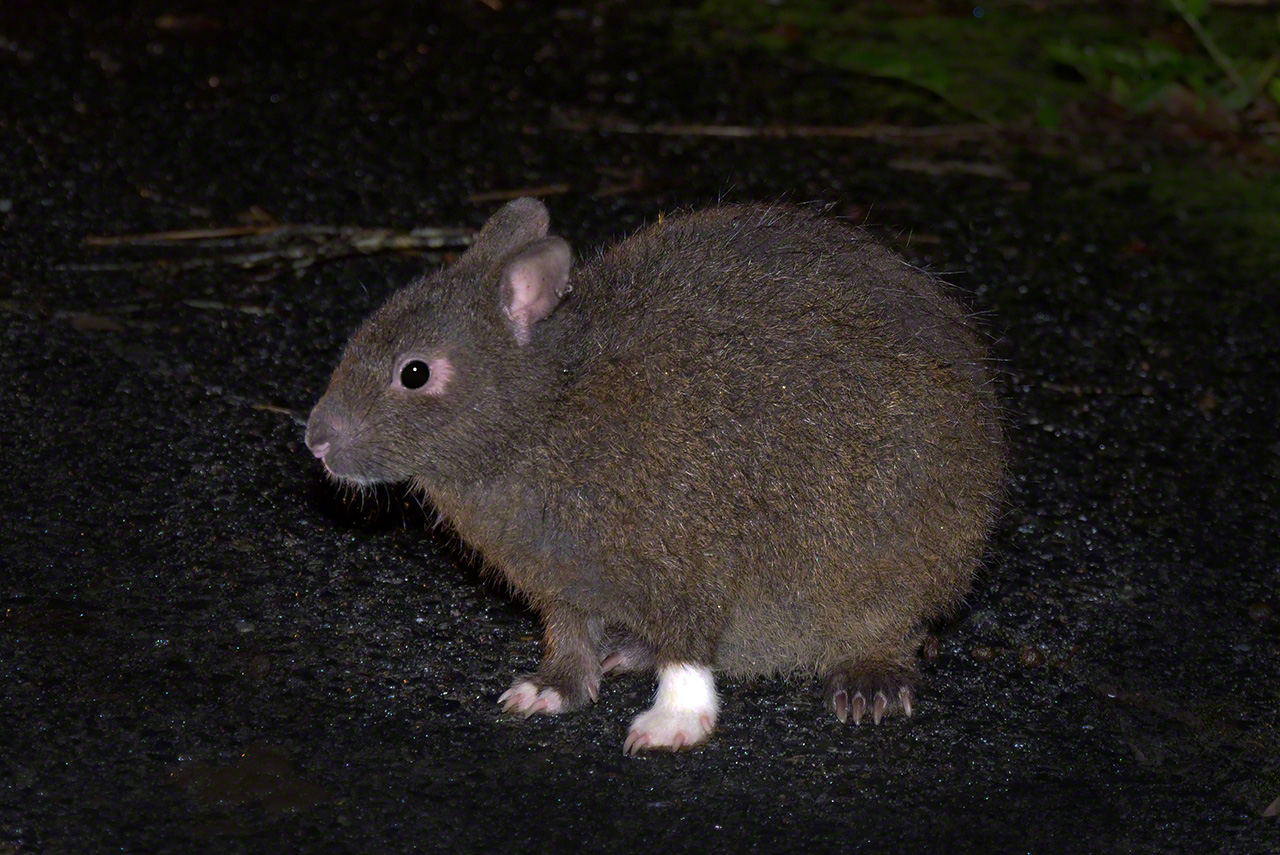 An Amami rabbit nicknamed “White Sock” for the unusual coloring of its front foot. 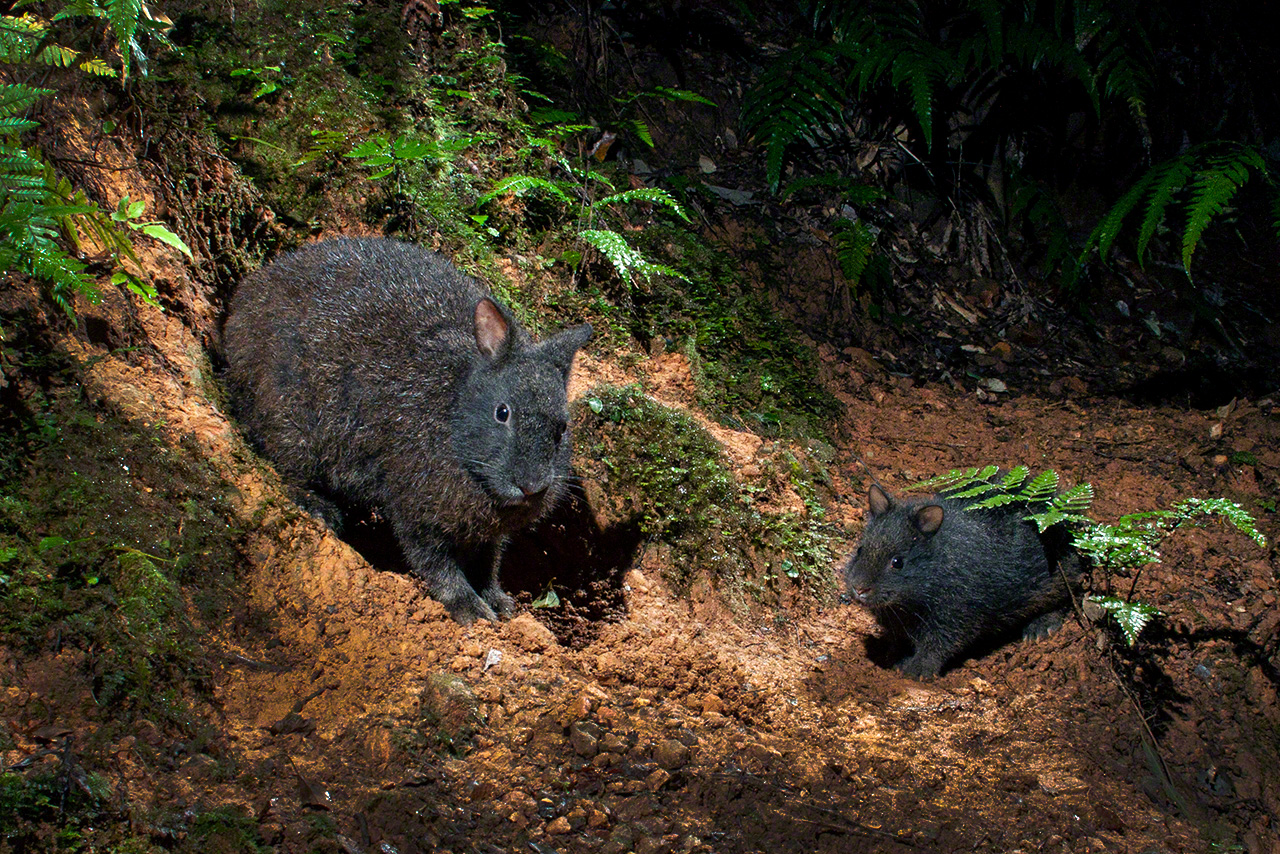 A mother and a kitten.

(Originally published in Japanese. Banner photo: An Amami rabbit looks into the lens of an unmanned camera as it attempts to climb onto a stump. All photos © Hamada Futoshi.)