The Anomalous Life of the Japanese Constitution

Politics Aug 15, 2017
The Japanese Constitution was drafted in the early postwar years and has never been amended. In this essay, a constitutional history and politics specialist examines Japan’s basic law as compared to its counterparts around the world. Do its brevity and reliance on legislation to alter its impact mean that Prime Minister Abe Shinzō does not need to focus on amending the Constitution to achieve his policy goals?

May 3, 2017, marked the seventieth anniversary of the enactment of the Constitution of Japan. Drafted and ratified during the Allied Occupation following World War II, it has been subjected to repeated calls for amendment in the intervening years. These efforts have picked up steam since December 2012, when a newly installed Prime Minister Abe Shinzō declared constitutional revision to be a priority during his tenure.

While the fate of constitutional amendment remains to be seen, the basic law is an outlier in one important respect: It is the oldest, unamended constitution in the world today. Prior research has shown that unamended constitutions tend to have shorter “lifespans”—without periodic revisions, they can fail to adapt to changing social norms, economic needs, and geopolitical challenges, thus facing higher risks of complete replacement.

The puzzle, then, is how Japan’s Constitution has survived for 70 years without any amendments to its text. My answer is simple: It is uncommonly short, leaving many details to be determined by law. As such, reforms that require amendments in other, longer constitutions can be legislated by a simple parliamentary majority in Japan. Formal amendments are less necessary in Japan.

As one indicator of constitutional detail, Figure 1 shows the word count of every constitution ratified since 1789, as translated into English by the Comparative Constitutions Project. Constitutions have become longer over time, as the spread of democracy has expanded the range of civil rights and government obligations demanded by citizens. While the average constitution today is 21,000 words, Japan’s is just shy of 5,000 words, making it the second-shortest constitution among democracies, following only Iceland’s. 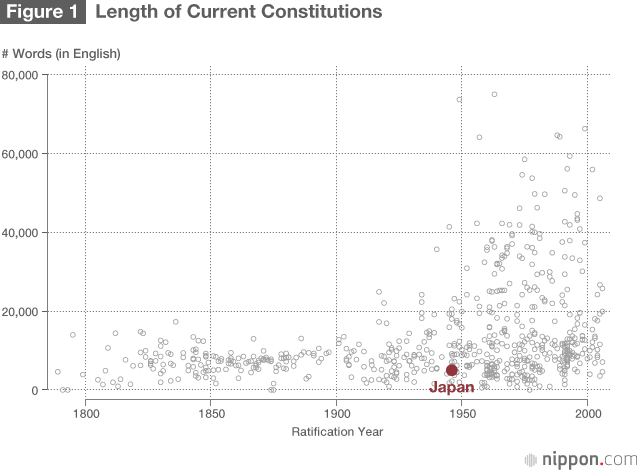 In the remaining essay, I highlight two “anomalies” of the Constitution of Japan. First, I discuss its origins, particularly the drafting choices made by Allied Occupation officers in 1946. Second, I use constitutional data to show the Japanese document’s uncommonly low specification of political institutions, which has contributed to reducing the need for amendments.

The occupation of Japan by the Allied powers began two weeks after its surrender on August 15, 1945. The Supreme Commander of Allied Powers, General Douglas MacArthur, pressed for the disarmament and democratization of Japan, with revisions to the Meiji Constitution a top priority. Frustrated by the slow progress made by Japanese government officials, MacArthur tasked his own officers with drafting a new constitution. The committee completed its task in a week, and the draft was publicized as a wholesale amendment to the Meiji Constitution in March 1946. It was ratified in November of the same year and implemented on May 3, 1947.

The new Constitution of Japan departed from its Meiji predecessor in emphasizing three important points: (1) popular, not imperial, sovereignty; (2) respect for fundamental human rights; and (3) pacifism and the renunciation of war. The third point, enshrined in Article 9, has long been at the center of constitutional disputes.

Article 9. (1) Aspiring sincerely to an international peace based on justice and order, the Japanese people forever renounce war as a sovereign right of the nation and the threat or use of force as means of settling international disputes. (2) In order to accomplish the aim of the preceding paragraph, land, sea, and air forces, as well as other war potential, will never be maintained. The right of belligerency of the state will not be recognized.

While Article 9’s interpretation has changed over time, it has traditionally proscribed Japan from possessing offensive military capacities. As a result, Japan officially only has its Self Defense Forces, although they constitute a military whose budget ranks eighth in the world (SIPRI Fact Sheet 2017).

Japanese conservatives have long decried the nation’s dependence on the US security umbrella and urged revisions to Article 9. The fact that the Constitution was drafted by US Occupation officers has also fed criticisms of its legitimacy. Despite the conservative Liberal Democratic Party holding parliamentary majorities for all but four years since 1955, however, no formal amendment proposal has even been submitted to the Diet.

Second, Elkins, Ginsburg, and Melton (2009) show that constitutions that do not go through moderate levels of amendment are less likely to survive, because citizens’ preferences naturally drift from that of the founding generation.(*1) In fact, the median lifespan of unamended constitutions is only 3 years; that for amended (at least once) constitutions is 22 years.

Why, then has Japan’s Constitution never been amended? One hypothesis is that it is too difficult to amend. Article 96 requires an amendment proposal to be initiated in the Diet by a two-thirds supermajority, followed by ratification in a national referendum by a simple majority. While there is no consistent cross-national data on voter referenda, the CCP provides information on the legislative hurdles for amendments. Looking only at existing constitutions, 76% require two-thirds assent by the legislature, making the legislative procedure in Article 96 of Japan’s Constitution quite typical. Importantly, even constitutions with this two-thirds hurdle are amended an average of once every nine years, making Article 96 unlikely to be the main cause.

Instead, the document’s lack of amendments can be better explained by its uncommon combination of “specific rights” and “vague institutions.” Let me unpack what this means. Figure 2 shows the specificity of rights and institutions in over 800 written constitutions since 1789, using CCP data. In McElwain and Winkler (2015), we identify 26 common human rights and 30 political institutions, and then measure how many of these topics are explicitly encoded in each constitution.(*2) The Constitution of Japan specifies 65% of rights (17 out of 26) and 47% of institutions (11 out of 30). Each circle in the figure represents the specification rate for one constitution at the time of its ratification, with human rights on the left panel and institutions on the right. Compared to the black trend line, we can see that the Japanese Constitution’s rights specificity, identified by the dashed lines, was relatively high for its time, while its institutional specificity was low. By 1947 standards, it enumerated more rights than all but four other constitutions; even today, it ranks in the top third. By contrast, its enumeration of political institutions, such as the powers of the executive, the autonomy of local governments, and the electoral systems for political offices, ranks 138th in the world today. 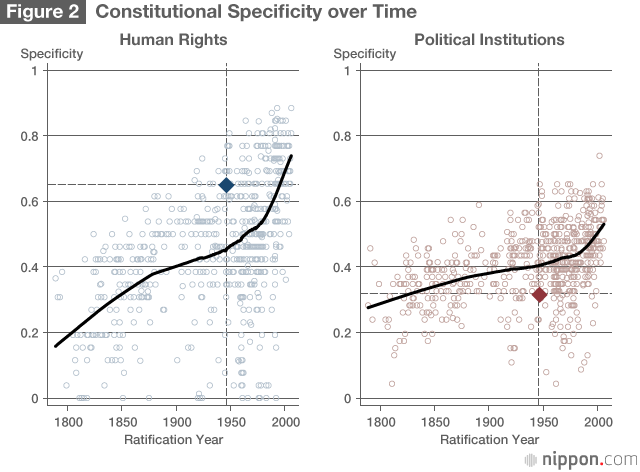 This pattern, particularly the low specificity of institutions, has had profound effects on the Constitution’s life since its ratification. In a separate project with Jean Clipperton of Northwestern University, we examine patterns in constitutional amendment over time.(*3) We find that on average, 74% of the first amendments to constitutions concerns political institutions, and 81% of second amendments do the same. Typical changes include revisions to the term lengths and election procedures of political officers. Constitutional amendments tend to focus on political processes, not on human rights.

Returning to the Japanese case, the Constitution’s institutional vagueness has meant that changes that require constitutional amendment in other countries can be accomplished by regular legislation in Japan. Take, for example, the electoral system. Japan’s Constitution specifies:

Article 47. Electoral districts, method of voting and other matters pertaining to the method of election of members of both Houses shall be fixed by law.

The pertinent law in Japan is the Public Office Election Act (公職選挙法), which has been revised 54 times since 1950. While many changes are minor, the House of Representative’s electoral system was revised wholesale in 1994, while that for the House of Councillors was partially changed in 1983 and 2001.

Similarly, the Constitution leaves the structure of local governments to law:

Article 92. Regulations concerning organization and operations of local public entities shall be fixed by law in accordance with the principle of local autonomy.

The Local Autonomy Act (地方自治法) currently designates 47 prefectures as the primary subnational unit in Japan. Unlike in federal systems such as Germany or the United States, which identifies specific states as fundamental units, Japan can theoretically dissolve these prefectures and replace them with 10 states or 300 municipalities by passing a simple law.

I should note that the structure of the Constitution is not the only reason for its lack of amendments. For most of the postwar period, Japan experienced steady economic growth, social order, and international peace. It has not suffered from severe economic crises or foreign invasions, both of which can produce political turmoil and moments of constitutional reflection. As a result, Japanese citizens have arguably never felt the need to amend the constitution.

Even should crises manifest in the future, however, the Constitution can accommodate institutional or policy-oriented adaptations due to its uncommon brevity. In May 2017, Prime Minister Abe inserted himself directly into ongoing debates on constitutional revision. He advocated the amendment of Japan’s Constitution by 2020, noting two points of emphasis: adding a third clause to Article 9 to formally recognize the SDF and making tuition for higher education free.

These revisions do not require constitutional amendment. First, regarding Article 9, it is not clear why the SDF, which already exists and whose survival has not been subject to serious constitutional challenge, needs formal recognition via amendment. In fact, the LDP has long assumed the constitutionality of the SDF, so declaring the need for revision seems to suggest that the government does not believe in its own rationale.

Article 26 (2) All people shall be obligated to have all boys and girls under their protection receive ordinary education as provided for by law. Such compulsory education shall be free.

To make higher education free, the government simply needs to change the legal definition of compulsory education from the current nine years of elementary and junior high school education.

None of these arguments should be construed as opposition to any constitutional amendment. If Japanese politicians and citizens agree with specific revisions at levels that meet the amendment threshold, then the principles of constitutional democracy will be satisfied. However, we should also be cognizant of the risks of constitutional amendment, particularly the possibility of unintended consequences. There should be broad consensus on the problems that the Constitution engenders, and how a particular amendment would solve them. We should be wary of proposals that fail to satisfy these criteria, especially because the beauty of the Constitution is its ability to address problems through nonconstitutional means.

As the old saying goes, “Don’t fix it if it ain’t broke.”

(Originally written in English. Banner photo: The original copy of the Japanese Constitution stored in the National Archives of Japan. )