Economy Work Nov 14, 2018
Under the government’s 2018 Basic Policy on Economic and Fiscal Management and Reform, Japan will allow a greater number of foreign workers into the country, marking a major shift in its immigration stance. This article will review previous immigration policies and explore the future implications of this policy change.

Japan’s policy toward foreign workers is undergoing radical change. The government’s 2018 Basic Policy on Economic and Fiscal Management and Reform, approved in June this year, includes a provision to create a new class of work visa for unskilled foreign labor to fill a dire manpower shortage in selected industries.

This is a major reversal of the government’s basic stance on foreign labor first established in 1988 with the adoption of the Sixth Basic Plan on Employment Measures. Under this plan, Japan actively welcomed foreign labor with specialized knowledge or skills but maintained its ban on unskilled laborers from abroad who might otherwise be admitted to compensate for domestic labor shortages.

Over the past three decades the subject of admitting foreign workers as a way to cope with the country’s declining population and attendant labor shortages has repeatedly surfaced. However, the government has held to its basic stance and avoided seriously considering the issue, claiming the need to first forge a national consensus.

In reshaping its annual economic and fiscal policy guidelines, though, the government shifted its long-held stance on immigration. To offset the growing shortage of labor, it included for the first time measures to admit blue-collar foreign workers and created a new status of residence for foreign workers coming to Japan.

According to Ministry of Health, Labor, and Welfare statistics, as of the end of October 2017 there were a record number 1,278,000 foreigners working in Japan. Remarkably, though, fewer than 20% hold working visas.

There are several different classes of visas that permit foreign residents to work, with different policies implemented for each class. In the following section, I will describe government policies and conditions pertaining to the individual visa classes over the past 30 years.

The Japanese government has maintained a policy of attracting highly skilled foreign talent and implemented various measures in line with this objective. This includes in 2000 setting as part of its basic IT strategy the goal of attracting 30,000 IT specialists by 2005; in 2012 instituting a point-based system for issuing visas to highly skilled foreign professionals according to criteria like educational attainment, age, and yearly earnings; and in 2015 establishing a specific visa category for highly skilled professionals.

In 2017, it created a fast-track system it termed a “green card for highly skilled professionals” that allows foreign workers earning a certain score under a point system to apply for permanent resident status after just one year instead of the usual 10.

The government as part of its growth strategy set a target for approvals under the point system for highly skilled professionals, and approvals are currently trending higher than the target figure. However, entry and exit figures indicate a low domestic retention rate as more foreigners holding highly skilled professional status have been exiting Japan than have been entering.

Visa Classes Based on Personal Status

In 1990, revision of the Immigration Control and Refugee Recognition Act created a new resident visa for foreigners of Japanese descent. As a result, a great many Japanese Brazilians came to Japan to work, settling mainly in the Tōkai and northern Kantō areas where there is a heavy concentration of manufacturing. Although most individuals initially arrived in Japan as migrant workers, a significant number stayed, renewing their visas or eventually acquired permanent resident status.

The number of Brazilians in Japan on long term resident visas reached a record 316,967 at the end of 2007. However, many visa holders were employed through labor dispatchers or contractors and had little job security. In the five years after the global economic crisis of 2008, over 100,000 returned to Brazil, of whom about 20,000 availed themselves of a monetary incentive from the Japanese government for returning to their home country. Incentives of ¥300,000 for individuals and ¥200,000 for each dependent were given on condition that recipients not re-enter Japan under the same visa status for at least three years. The Brazilian population in Japan declined until 2015 but as of the end of 2017 has rebounded to 191,362.

Over the last 30 years education-related issues, including truancy and low university advancement rates among children of long-term resident visa holders, have frequently been cited. In the past few years nursing care for long-term residents has emerged as an issue in regions where there are large foreign communities.

In 1993 Japan initiated the Technical Intern Trainee program as part of its international cooperation activities with the ostensible intention of transferring skills to individuals from developing countries. Today, the program accounts for about 20% of foreign workers in Japan. Initially, the program covered 17 types of job categories, mainly in manufacturing, and allowed interns to stay two years, one year for training and another for acquiring practical skills. It was expanded to include agriculture-related work in 2000 and personalized service of nursing care in 2017. Currently there are 77 occupational categories covering 139 types of work activities, and the period of stay has been extended to a maximum of five years.

However, the system has not been entirely problem-free. Incidents of trainees being subject to human rights abuses and labor law violations by their employers have appeared in the Japanese and foreign press and was even mentioned in the US State Department's Trafficking in Persons Report. To address the issue, Japanese authorities enacted the Technical Intern Trainee Act in 2017 that introduced regulations and penalties for managing entities and companies employing trainees.

Until a few years ago Chinese accounted for the largest proportion of technical trainees, but numbers have dropped as China’s economy has developed and the country begins to feel the effects of its low birth rate and aging population. Vietnam overtook China in 2016 in terms of trainees in Japan, and the number of Vietnamese interns continues to grow.

Similar to China, though, Vietnam’s economy has become more vibrant and the country is beginning to feel demographic pressure as its birthrate declines and its population ages. A recent uptick in trainees from Cambodia and Myanmar suggests that focus is now shifting to these countries as sources for manpower. However, this flux in trainees indicates that Japan must adjust its industrial structure to appeal to foreign workers so as to secure a steady and much-needed supply of low-cost labor. 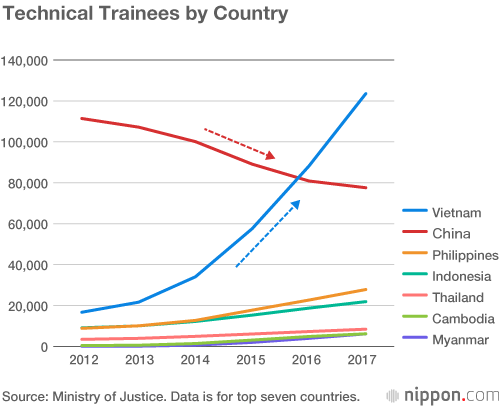 Japan is unusual in that foreign students make up a significant portion, over 20%, of foreign workers in the country. In contrast, only 1.5% of foreign students in Korea hold jobs. Foreign students, for whom the main purpose of their stay in Japan is study, are becoming an increasingly important presence in the domestic labor market.

Japan has gradually changed its policy on foreign students. In 1983, the government, looking to promote internationalization, announced a plan to boost the number of foreign students in the country to 100,000 by the year 2000. This target was reached in 2003, three years behind schedule. A subsequent plan linked with the government’s focus on attracting highly skilled foreign workers is currently underway that aims to admit 300,000 foreign students by 2020. 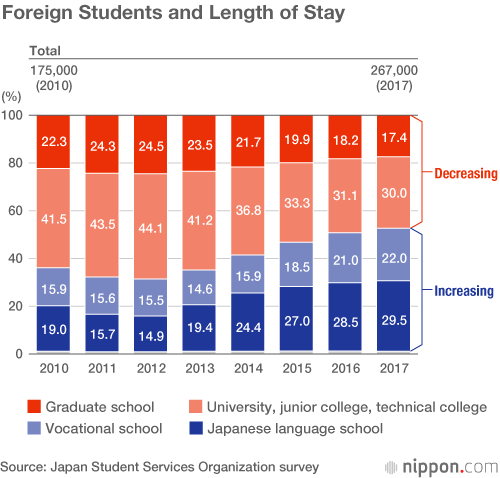 According to a Japan Student Services Organization survey, the percentage of foreign university and graduate students working part-time jobs is trending downward. By comparison, rates for foreign students at vocational and Japanese language schools is increasing, with people working mainly in restaurants and shops such as convenience stores.

However, this has led to a situation where many students, particularly at Japanese language schools, are spending more time at their part-time jobs than on their studies. In October 2018 the Ministry of Justice stepped in, establishing stricter standards for classroom hours and oversight of students as part of requirements for Japanese language schools.

The Designated Activity Visa, while not widely known, has been gaining importance, particularly after shifts in immigration policy under Prime Minister Abe Shinzō. This visa is broad in scope, allowing entry to foreign workers based on such factors as Japanese lineage, participation in economic partnership agreements such as for nursing care and the construction and shipbuilding industries, and employment in special strategic zones in Japan.

Viewing Foreign Workers as Members of the Community

Regions with high concentrations of foreign labor have taken the lead in initiating more inclusive social governance policies. However, the central government has been slower to act.

The government in creating new visa types has tended to focus its attention on criteria such as required skills for foreign laborers, target industries, and period of stay. As more foreigner laborers will be coming to Japan for longer periods, there is serious need for deeper discussion in how to help newcomers integrate into local communities and make them feel that they are part of Japanese society.