Space: A New Battleground for Japan

Politics Dec 5, 2018
Increasing military use of satellites means that space is an integral part of many countries' defense strategies. Until recently, Japan's use of space was limited to civilian purposes. What does the future hold for Japan's strategic use of satellites and other space technologies?

The Importance of Space Systems to Modern Military Technology

The latest updates to Japan’s National Defense Program Guidelines and Mid-Term Defense Program are due to be drawn up at the end of this year. It is already clear that one new priority in these crucial strategic documents will be cybersecurity and the defensive implications of space technology. Prime Minister Abe Shinzō recently suggested that maintaining an advantage in these new areas is of “vital importance” to national security, placing Japan’s space capabilities under new scrutiny.

Japan’s space development program has followed a somewhat different path from the one seen in other countries. When the National Space Development Agency of Japan was established in 1969, a resolution of the Diet decreed that Japan’s development and use of outer space should be exclusively limited to peaceful, civilian purposes. This resolution was modeled on the Atomic Energy Basic Act, which requires that the Self-Defense Forces should have no involvement with nuclear power. The 1969 resolution was long taken to mean not only that Japan should refrain from developing its own space system with potential military uses but that it was also banned from possessing, operating, or even using such space systems. Japan’s space program has therefore focused on purely civilian objectives, with the sole exception of the use of commercial satellites for military data and communications, which has been allowed since the 1980s. For decades, therefore, defense and space development existed in totally separate spheres.

Today, however, many modern weapons systems are almost impossible to operate without the use of a space system. The GPS satellites that play such a familiar role in our daily lives are also a vital part of the US military system, and provide essential services in military strategy by controlling drones and monitoring the location of military units. Satellite communications networks are essential for controlling these drones remotely. Images acquired from reconnaissance satellites are vital for ascertaining the position of potential targets and understanding strategic positions, and ground systems for launching and maintaining these satellites are also an important element of military defense strategy.

In other words, a country’s ability to build and operate space systems is now a decisive factor in maintaining a military advantage. Despite this vital importance, however, space systems remain vulnerable. They must operate in an environment that is cluttered with the upper stages of rockets, expired satellites, and other space debris, all of it orbiting the earth at a speed of 28,000 kilometers per hour. Any satellite that collides with this debris is likely to shatter and be rendered useless.

For a satellite to escape the earth’s gravity, it needs to be as light as possible. This, of course, makes cladding it in thick and heavy protective plating impractical. In fact, there is no real way to protect a satellite from space debris—the best that can be done is to try to avoid the stuff in the first place. The defense authorities of the United States and other countries with space programs therefore operate systems for increasing Space Situational Awareness, monitoring debris in orbit and sharing information to help prevent collisions. But the SSA program can only detect debris that is at least 10 centimeters in diameter. As yet, there is no way to avoid smaller debris. This means there is a danger that a military-purpose use satellite will collide with debris and lose its functionality.

An even bigger risk is that an enemy might deliberately target defense-related satellites. In 2007, China carried out an anti-satellite (ASAT) test, demonstrating that it had the capability to destroy a satellite using a missile launched from earth. The Soviet Union also conducted similar tests during the Cold War. Today, when space systems are vitally important assets, possessing ASAT capability is more significant than ever.

This means that space systems would be a likely first target if tensions between the United States and China ever increased to the point where a military conflict seemed imminent. Crippling a country’s space system would dramatically reduce the enemy’s military capability. At the same time, since military satellites are unmanned, there would be no risk of casualties. Another factor that makes these satellites tempting as the target for a first strike is the fact that they are located several hundred kilometers from Earth’s surface, making it almost impossible to trace responsibility for any attack with absolute certainty.

Although it would be relatively easy to identify the culprit in the case of an ASAT or similar physical attack, if a belligerent state or other actor decided to launch a cyberattack or knock out a satellite by transmitting jamming signals, attribution would be extremely difficult. And defending a space system by expelling enemy units would be much more difficult than in conventional warfare involving the land, sea, and air forces. Space systems are constantly orbiting the earth. This often means that they inevitably pass above enemy airspace. And even if you want to stop an enemy from launching its own offensive satellite, there is no way to do so. For these reasons, attacking an enemy’s space systems at an early stage in any armed conflict makes sound strategic sense.

Given the increasing role of space systems and the importance of making them less vulnerable, many countries are reorganizing their military to bolster their strategic capabilities in space. This applies particularly to countries like the United States and China, which have strategic interests around the world and maintain an ability to project force across long distances. US President Donald Trump recently called for a Space Force. The idea is to increase research and development in space systems, with the aim of overcoming some of the present vulnerabilities of these systems by launching large numbers of smaller satellites and using constellation technology to synchronize them. The United States is currently looking to revise its military funding model to make this feasible. Despite the science-fiction overtones of the term “Space Force,” evoking the image of space battles like something out of Star Wars or Space Battleship Yamato, in fact the primary purpose of any Space Force for the foreseeable future would be to play an important defensive role by developing and maintaining space infrastructure.

In this context, the prime minister’s declaration that space is “of vital importance” in the lead up to formulating the new defense guidelines, suggests an awareness that Japan’s defense systems need to acquire a new space capability to enable them to respond to modern warfare. But because of the requirement that the country’s space development program focus exclusively on peaceful uses, Japan has done very little to develop or use space for defense purposes until now.

Under the 2008 Basic Space Law, the development and use of space for defense purposes was allowed on a restricted basis for the first time. But compared to countries like the United States and China, the scale remains extremely limited. At the moment, the Ministry of Defense and the SDF do not possess any satellites of their own, and merely have exclusive use of the X-band communications satellite system Kirameki. 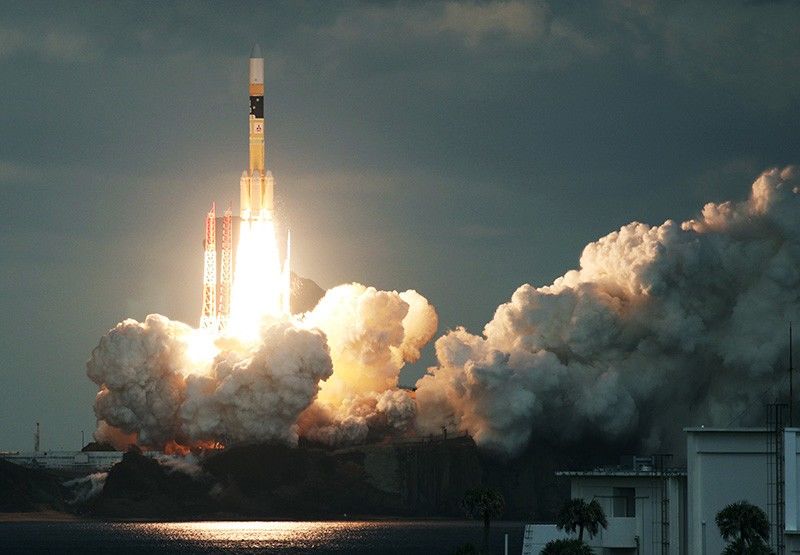 Launch of an H-IIA rocket carrying the X-band communications satellite Kirameki-2, developed by the Ministry of Defense, from Tanegashima Space Center, Kagoshima Prefecture, on January 24, 2017. (© Jiji)

The Basic Space Law decreed that any development and use of outer space must be “in accordance with the pacifism of the Constitution of Japan” (Article 2) and carried out “to ensure international peace and security; and to increase the national security of Japan” (Article 3). When the new law was passed, it was widely expected that the MOD and SDF would start to make more active use of space systems. But in fact, most of Japan’s defense equipment is operational without strategic support from space, and unlike the United States or China, Japan has no need for long-distance power projection capabilities. This meant that building a space system has been a low priority until now.

Another factor has been the pinched situation of government spending. Although there has been a relative increase in the defense budget, the bulk of this new spending has gone on bolstering missile defenses and acquiring F-35 fighters to respond to the rising military presence of China in the region and the threat from North Korea’s nuclear program. Money that might otherwise have been spent on building a space program has tended to be diverted to these other purposes.

The fact that the prime minister has underlined the critical importance of space indicates a growing anxiety within the government that Japan must not fall behind in building a strategic capability in outer space at a time when the United States and China are actively developing their own programs. During the Cold War, the Sputnik Shock triggered an intense space race between the United States and the Soviet Union that lifted the two superpowers to a level of technological capabilities that no other country could match. High-tech industries in both countries made massive leaps forward as a side-effect. It is quite likely that the current efforts on the part of the United States and China to develop their strategic space capabilities will have a similar effect. Falling behind could therefore have knock-on repercussions for Japan’s wider technological capacity as a whole.

The Need to Work with Allies

Nevertheless, the fact remains that Japan’s defense strategy does not require the ability to project power across long distances. Neither does the country need to protect global strategic interests or dispatch the SDF elsewhere in the world. Given this reality, it does not make much sense for Japan to invest massive amounts in building space systems.

The priority for Japan should be the reality that the country’s own defense capability could potentially be affected by any attack on the space systems of its American ally. Japan is already cooperating in SSA with the United States, Europe, and Australia. Even if the country does decide to develop its own space system, the objective should not be simply to serve Japan’s defensive needs alone. Japan should aim to be in a position to offer its own systems to its allies, ensuring that the strategic ability of the alliance as a whole would not be reduced even if some of space systems were affected by an enemy attack.

Japan should first look to incorporate its intelligence satellites and GPS alternative, the Michibiki quasi-zenith satellite system, into its defense thinking, and consider shared use with allied countries. In terms of any space systems it may develop in the future, Japan should have a view to the strategic needs of its allies, and aim to maintain its defensive advantage not by acting alone but in partnership with other nations.