Six Years in Office: What is Next for Abe Shinzō and His Government?

Economy Dec 28, 2018
Since taking office in December 2012, Prime Minister Abe Shinzō has pursued economic policies known as Abenomics. While these policies have had some effect in overcoming deflation and in bringing about an economic recovery, growth strategies have yielded few results, and many challenges remain.

Prime Minister Abe Shinzō made overcoming deflation an imperative and, to achieve this aim, announced a triad of policies called the “three arrows” that consisted of bold financial policies, flexible fiscal management, and growth strategies that stimulate private-sector investment. These policies represented the first round of Abenomics.

Abenomics initially was a major success. The economy marked a trough in November 2012 and turned upward, a change that was reflected in major economic indicators. Real GDP accelerated its growth from 0.8% in fiscal 2012 to 2.6% in fiscal 2013. Similarly, nominal GDP rose from 0.1% to 2.6%. The unemployment rate fell from 4.2% in October–December 2012 to 3.6% in January–March 2014, and the ratio of active job openings to active applicants climbed from 0.82 to 1.05. Consumer prices excluding fresh foods increased year on year from -0.1% in October–December 2012 to 1.3% in January–March 2014. To summarize, the economy accelerated, employment conditions improved, and the consumer price index turned positive. 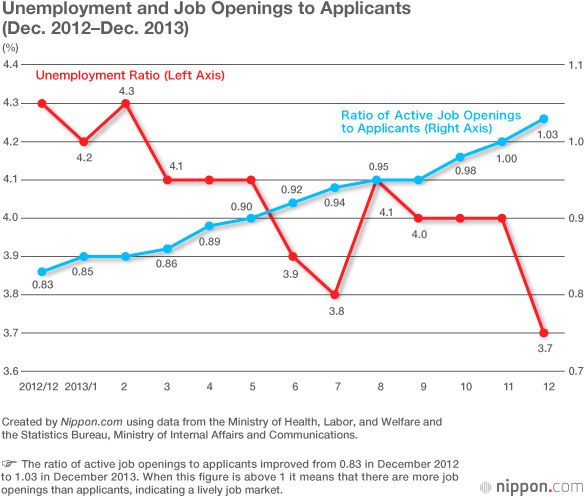 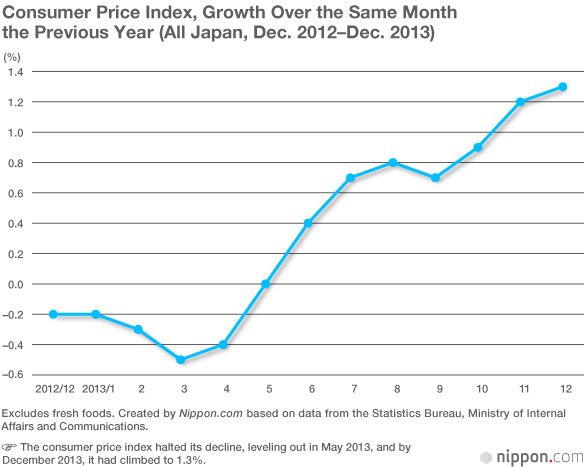 Why did Abenomics initially do so well? Four reasons can be cited. First, with the start of the Abe administration, market participants came to expect a significant easing of monetary policy and economic policies prioritizing growth. These expectations lifted stock prices and weakened the yen. Second, the depreciation of the yen increased domestic prices through higher import prices, and the rise of export prices in yen terms enabled the earnings of exporting companies to recover. Third, public works spending grew 8.6% in real terms based on GDP in fiscal 2013 and boosted demand. Fourth, the impending increase of the consumption tax in April 2014 from 5% to 8% led to a substantial acceleration of demand in fiscal 2013. These positive factors, however, were temporary in nature. Their effect waned in fiscal 2014, and the recovery of economic performance came to an end.

Once the consumption tax was increased, the economy leveled off for the most part. Then, when the world economy began to recover in the second half of 2016, the growth of exports enabled Japan’s economy to expand again. Despite such twists and turns, the economy has logged the second longest expansion in the postwar period as of November 2018 and will achieve the longest expansion if growth continues to January 2019.

Monetary Easing of a “Different Dimension” and Its Limits

Monetary policy was a major component of Abenomics. As deflation persisted in Japan, the Bank of Japan increasingly implemented aggressive measures as it moved beyond its former framework for monetary policy. These measures in many cases entered the realm of the unknown and were by necessity experimental in nature.

The second measure was monetary easing of a “different dimension” that Kuroda Haruhiko, the new BOJ governor, unveiled in April 2013. This measure sought to achieve the 2% inflation target in two years by doubling the monetary base and the BOJ’s holdings of long-term government bonds and exchange traded funds, and by more than doubling the average durations of the long-term government bonds the BOJ purchased. This was monetary easing of a different dimension in both quantity and quality.

Governor Kuroda’s clear and confident explanation and strong commitment to respond as necessary to achieve the 2% target in two years had a considerable effect on this policy.

As it became clear that the 2% target was unlikely to be achieved on schedule, the BOJ eased monetary policy further by increasing its monthly purchases of Japanese government bonds to ¥10 trillion in October 2014.

This new framework consisted of (1) buying Japanese government bonds to maintain long-term interest at an annual rate of around zero, (2) retaining a negative interest rate policy, and (3) continuing to expand liquidity until CPI stably exceeded 2%. This policy came to be known as “quantitative and qualitative monetary easing with yield curve control.”

What made the assessment of monetary policy necessary is plain to see. First, monetary easing of a different dimension did not prove effective, and the goal of achieving a 2% inflation target in two years was not achieved. Second, the massive purchases of government bonds would become restricted by their supply in about two years’ time. Third, the negative interest rate policy did not have much effect, and such side effects as a reduced lending spread worsening the earnings of financial institutions became pronounced.

This turnaround in monetary policy is currently ongoing, making evaluation difficult. However, it is reasonable to think that the BOJ is beginning to change the direction of monetary policy. This is suggested by the shift in monetary policy from quantity to controlling the interest rate, by the BOJ deciding not to drive the interest rate further into negative territory, and by the possibility that purchases of government bonds will need to be reduced if the target for the long-term interest rate is to be achieved. A major policy challenge for the BOJ will be how to exit toward normal monetary policy management while avoiding a return to persistent deflation.

The Abe administration has subsequently expanded the policy scope of Abenomics. In June 2016, the Abe cabinet approved “Japan’s Plan for Dynamic Engagement of All Citizens,” which included a new set of three arrows.

These three arrows are (1) a robust economy that gives rise to hope, whose target is nominal GDP of ¥600 trillion; (2) dream-weaving childcare support, which aims for a birthrate of 1.8; and (3) social security that provides reassurance, where no one is forced to leave their jobs to provide nursing care.

The government is also forcefully engaging in work-style reforms as a cross-sectional issue. Its main objectives are the achievement of equal pay for equal work and the correction of long working hours. To this end, in March 2017 it adopted the Action Plan for the Realization of Work Style Reform, which establishes an upper limit for labor hours without exception even when there are labor-management agreements or special clauses. With respect to equal pay for equal work, the plan specifies that companies should avoid unreasonable differences in treatment between regular and nonregular employees in wages as well as in bonuses and employee benefits.

Such are the ways economic policies have been pursued under the Abe administration. Many issues, however, remain. They include strengthening the growth capacity of Japan’s economy through growth strategies, responding to a declining birth rate, and promoting free trade globally.

A major issue demanding attention is the reform of public finances and social security. Awareness is widespread that Japan’s fiscal balance has worsened to a crisis point. Many economists are concerned that, unless this crisis is addressed, it will risk major economic turmoil that would greatly harm the welfare of Japanese citizens. This is the so-called fiscal bankruptcy scenario. In the implementation of Abenomics, however, restoring the integrity of public finances has been put off. The increase of the consumption tax rate to 10% that was scheduled for October 2015 was postponed in November 2014, and then again in June 2016. Moreover, a significant portion of the funds raised through the consumption tax hike was directed toward the support of childcare and early childhood education. The return to sound public finances is moving ever further out of reach.

In its Solid Policy Framework for 2018, the government established two targets for restoring the integrity of public finances: (1) achieving a positive primary balance in fiscal 2025 and (2) the stable reduction of the ratio of government debt to GDP. However, in the “Economic and Fiscal Projections for Medium- to Long-Term Analysis” published by the Cabinet Office, the primary balance is projected to be a negative 0.5% of GDP in fiscal 2025 even when high economic growth is assumed. There is no avoiding the fact that the path toward restoring sound public finances will be long and difficult. 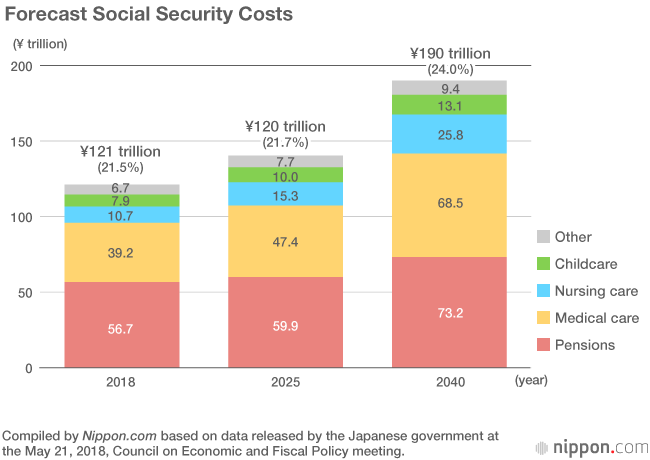 An urgent issue when considering the future of public finances is social security reform. Standing by and doing nothing as Japan’s population ages further will result in the natural growth of such social security costs as medical, nursing care, and pension expenditures. There is a need to reform social security and to rationalize expenditures. Politicians, however, are reluctant to do so, fearing the reaction of Japanese citizens. As it enters its seventh year, the Abe administration continues to face many challenges.