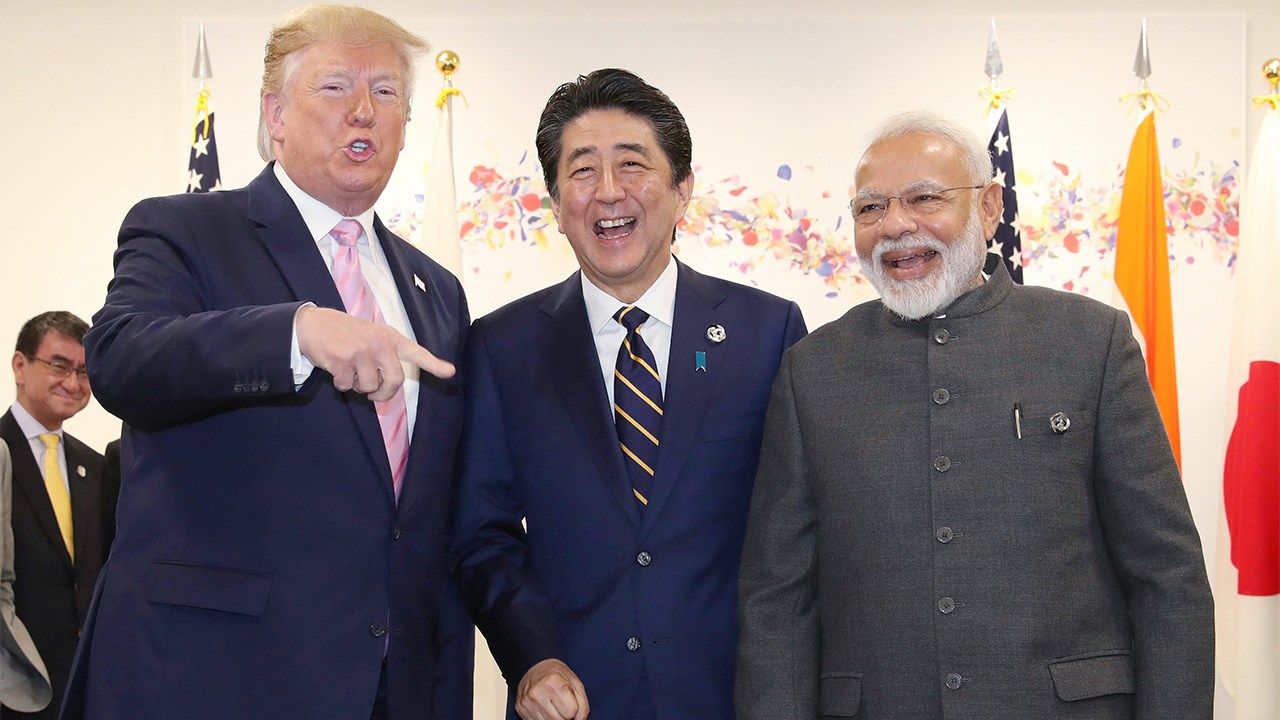 “Modi Diplomacy” and the Future of Japan-India Relations

Politics May 18, 2020
Under Prime Minister Narendra Modi, India has been walking a tightrope between the United States and China even as it nurses its own ambitions for global leadership. Horimoto Takenori assesses the role of the Japan-India relationship in this dynamic context.

India’s ruling Bharatiya Janata Party scored another resounding victory in the May 2019 general election, ushering in a second term for Prime Minister Narendra Modi and “Modi diplomacy.” With a nationalistic swagger reminiscent of such leaders as US President Donald Trump and Russian President Vladimir Putin, Modi is just the third Indian prime minister to leave such an indelible stamp on the country’s foreign policy (after Nehru, who championed the policy of nonalignment, and Indira Gandhi, who forged India’s partnership with the Soviet Union).

Under the diplomatic leadership of Modi and Japanese Prime Minister Abe Shinzō, Japan and India have continued to strengthen ties, cognizant of their growing importance to one another in the context of international power politics. In the following, I attempt to analyze and forecast the trajectory of Japan-India relations under Modi diplomacy.

Perhaps the most salient aspect of India’s foreign policy during Modi’s first term was its explicit reorientation toward a vision of India as a major world power. This reorientation has all but negated the meaning of “nonalignment” as a pillar of Indian diplomacy.

Narendra Modi came to power following the BJP’s historic victory in the general election of 2014. In February 2015, in keeping with his party’s “India first” manifesto, Prime Minister Modi called on top Indian diplomats worldwide “to help India position itself in a leading role, rather than just a balancing force, globally.” The following May, in a speech to the International Institute for Strategic Studies in Singapore, Foreign Secretary Subrahmanyam Jaishankar took the idea a step further, stating that India’s new aspiration was “to be a leading power, rather than just a balancing power.”(*1) By substituting “power” for “role,” Jaishankar articulated a new vision of India as a major world power, signaling a decisive shift in the country’s foreign policy.

Supporting that vision is the hard reality of India’s rapidly growing economic and military might. According to the World Bank, India’s gross domestic product for 2014, the year Modi took office, was US $2.04 trillion, making it the world’s ninth largest economy. In 2018, it ranked seventh, with a GDP of $2.73 trillion. During the same time, its defense spending rose from $46.1 billion to $66.5 billion, propelling it from eighth to fourth in the world, according to the Stockholm International Peace Research Institute. (Japan ranks ninth.)

But while Modi’s basic long-term goal may be clear, his actual foreign policy can be mystifying. Over the past five years, India has strengthened its strategic partnerships with the United States and Japan while at the same time taking significant steps to bolster relations with both China and Russia. Calling this multidirectional diplomacy provides a superficial description but sheds little light on the strategic thinking behind India’s foreign policy. What are the driving forces behind Modi diplomacy, and what role can we expect Japan to play in it henceforth?

Charting a Course Between China and the US

The term “leading power” implies global leadership. But for now, India’s main concern is the Indo-Pacific region, where China and the United States are locked in a battle for hegemony. From India’s standpoint, Japan has a critical role to play in terms of protecting and advancing India’s interests amid this unfolding drama. The converse is also true.

After taking office in 2017, US President Donald Trump removed the pillars of the Obama administration’s East Asia policy—the Trans-Pacific Partnership and the strategic rebalance to Asia and the Pacific—without bothering to replace them. In November 2017, when Trump toured Asia for the first time, his administration still had no coherent Asia-Pacific strategy. This explains why it was so quick to embrace Abe’s Free and Open Indo-Pacific (FOIP) concept.(*2)

The December 2017 National Security Strategy, issued by the White House, identifies China and Russia as key threats to America’s interests and criticizes China for attempting to “displace the United States in the Indo-Pacific region, expand the reaches of its state-driven economic model, and reorder the region in its favor.”(*3) It further states, “We welcome India’s emergence as a leading global power and stronger strategic and defense partner. We will seek increased quadrilateral cooperation with Japan, Australia, and India.”(*4) The last sentence is a reference to the informal quadrilateral security dialogue (or “Quad”), originally initiated by Abe in 2007. It was in fact revived in 2017 and upgraded to a ministerial-level forum in September 2019.

When Trump visited India in February 2020, the Modi government pulled out all the stops, staging a massive rally to welcome the president. Trump gushed over a deal to sell US military helicopters to India at a price of about $3 billion (a step toward reducing India’s massive trade surplus with the United States) and spoke of further revitalizing the “Quad initiative.”

Despite these signs of strategic cooperation with the United States, New Delhi’s attitude toward China is far more ambivalent and nuanced than Washington’s. To be sure, longstanding border disputes remain a major source of bilateral tension. In addition, New Delhi looks askance at the China-Pakistan Economic Corridor—part of Beijing’s ambitious Belt and Road Initiative—claiming that the infrastructure projects are part of a strategy to encircle India. That said, the Indian government is intent on staying engaged with China, particularly on an economic level, and it would love to put the relationship on a more stable footing. Aware of Beijing’s hostility toward any regional framework that threatens to exclude or contain China, Modi has deliberately rephrased Abe’s FOIP concept as a “free, open, and inclusive Indo-Pacific” (FOIIP). This is typical of New Delhi’s China strategy of engaging while hedging.(*5)

In November 2019, Modi’s government abruptly announced its withdrawal from negotiations for the Regional Comprehensive Economic Partnership, a proposed free trade agreement embracing the Association of Southeast Asian Nations and six ASEAN partners, including Japan and China.

New Delhi had been strengthening ties with ASEAN since the 1990s, when it adopted its Look East policy (which Modi expanded and renamed Act East). In 1995, India became an ASEAN dialogue partner, and in 2012 it concluded a strategic partnership with ASEAN. In 2012, India entered into negotiations for the RCEP, hoping to further strengthen economic ties with ASEAN. Tokyo had welcomed India’s involvement in the initiative as a useful counterweight to China’s influence.

India’s November announcement came as a shock to the Japanese. The Indian government explained its decision by citing the country’s large trade deficit with China and opposition from business and agriculture interests concerned about an influx of cheap imports. Still, the decision could have the effect of negating the hard-won gains of India’s Look East policy. Today ASEAN, as a whole, accounts for 10% of India’s exports, making it India’s fourth largest export market. Indian affairs expert Kishore Mabhubani compared the last-minute announcement to Britain’s Brexit decision and predicted that “India will come to realize that its ‘Look East’ and ‘Act East’ policies will mean absolutely nothing if it does not join RCEP.”(*6)

India’s withdrawal from the RCEP represented yet another setback for Japan’s Indo-Pacific policy, which was still reeling from Trump’s decision to pull the United States out of the TPP. Without India, Japan’s influence in the RCEP would be significantly reduced. Although Beijing has publicly called on New Delhi to reconsider, one can easily imagine that the Chinese are privately pleased with the latest turn of events.

RCEP issue has been followed by Abe’s called off visit to India. In terms of ties between New Delhi and Tokyo, Modi’s second term began on a promising note. In November 2019, Japan and India held their first “2 plus 2” meeting of foreign and defense ministers and expressed their intent to conclude an acquisition and cross-servicing agreement (ACSA) between Japan’s Self-Defense Forces and the Indian military. The agreement would set the stage for the kind of security cooperation, including joint exercises, that Abe is eager to pursue as a deterrent to Chinese aggression. The ACSA was to be signed at the fourteenth Japan-India summit, scheduled to be held in Assam in December 2019, but Abe’s visit was canceled amid violent anti-government protests in the region.

Significance and Future of the Japan-India Relationship

India’s emergence as a major power could have a profound impact on the shape of the regional and global order. Much will depend on New Delhi’s relationship and interaction with Beijing. Given the stark contrast between Indian democracy and Chinese totalitarianism, the rivalry could have major ideological as well as geopolitical implications. Unfortunately, the anti-Muslim Hindu nationalist policies of the Modi government, which have triggered a backlash from Islamic nations as well as protests at home, have tarnished India’s image as a champion of liberal democratic principles.

Beijing’s ambition is clear: to displace the United States as the dominant power in the Indo-Pacific. There is no question, moreover, that America’s influence in the region is weakening relative to China’s. There are growing concerns that the coronavirus pandemic has handed Beijing an opportunity to seize the mantle of leadership from the United States, providing medical supplies to Spain, Italy, and other countries in need and ramping up its public diplomacy, while the White House does little except blame the Chinese for the epidemic.(*7)

In such an uncertain and dynamic environment, India is understandably hedging its bets. While signing on to FOIP and the Quad, it is also engaging actively with China through participation in the Shanghai Cooperation Organization, the BRICS summit, and the Russia-India-China (RIC) trilateral summit. For a country that (whatever its ambitions) still lacks major-power clout, such a balance will be difficult to maintain. A stable, reliable relationship with Japan is very much in India’s interests.

Japan and India are alike in that neither has ever amassed the hard power needed to “go it alone” in the world. Since the early twentieth century, Tokyo has built its foreign policy around alliances with major Western powers: first the Anglo-Japanese alliance, then the Tripartite Pact (with Germany and Italy), and finally the Japan-US alliance after World War II. India took a different path with its Cold War strategy of nonalignment, but that policy depended on a partnership of nonaligned nations. In the 1970s and 1980s, faced with the US-China rapprochement, it shifted to a de facto alliance with the Soviet Union.

While a great deal has changed since then, Japan and India remain essentially in the same boat; both must still assiduously cultivate and maintain relationships with other countries to support their own position in the global community. In today’s perilous world, the two countries are bound to one another by common interests, at least insofar as foreign policy is concerned. While keeping a close eye on developments at the local, regional, and global level, they will have no choice but to proceed with diplomacy that emphasizes bilateral relations tor the time being.