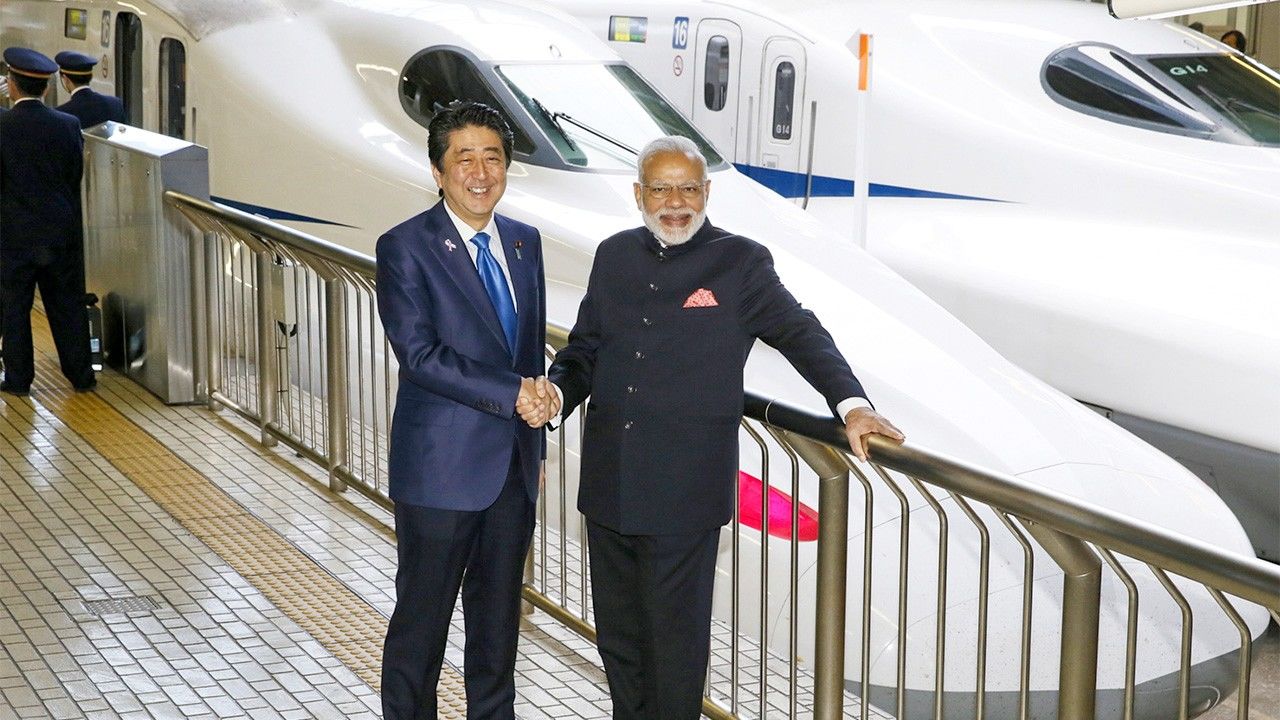 Economy May 20, 2020
Japan is fulfilling an important role in India’s infrastructure development, such as in the building of new industrial cities through the construction of subways, dedicated freight railways, and high-speed railways using Shinkansen technology.

Japan and India are Asia’s two major democracies. They are natural partners, with an economic complementarity that is potentially quite high. Being burdened with a mature economy, an aging population, and a low birthrate, Japan is in need of a growth scenario. In developing such a scenario, it will be important for Japan to expand its relationship with India, which is continuing to grow rapidly. However, as highlighted by sluggish bilateral trade and foreign direct investments in India driven by expectations, this economic relationship falls far short of its potential. What is most noteworthy at the moment is Japan’s investment in Indian infrastructure through official development assistance. India has high expectations of Japan as a development partner. This article discusses the latest trends in the multifaceted Japan-India economic relationship and examines its future prospects and issues.

Prior to World War II, Japan imported large quantities of cotton and pig iron from India, and India accounted for 10% to 15% of Japan’s total trade. Currently, both countries have diversified their trading partners, and the share of bilateral trade has declined. As of 2018, India had a 1.1% share of Japan’s total trade, and Japan’s share of India’s trade was 2.1%. Despite the Japan-India Economic Partnership Agreement, which took effect in August 2011, bilateral trade has not increased by any great degree. Japan-India trade totaled about $17.6 billion in 2018—less than the trade between India and South Korea, and only a fifth of India’s trade with China.

Japan has had a recurring trade surplus with India. Leading products imported from India are petroleum products (naphtha), organic chemicals, gemstones, and fish and shellfish. Horizontal trade has not developed between Japan and India as seen in the trade of industrial products and parts between Japan and East Asian nations. While India has a comparative advantage in generic drugs, exports of pharmaceuticals to Japan remain stagnant, even though the Japan-India EPA gave India national treatment for the registration of generics and related applications. While India exported $5.4 billion in pharmaceuticals to the United States in fiscal 2018, corresponding exports were only $58.2 million to Japan.

In contrast to the situation for trade, foreign direct investment is experiencing a more dynamic trend. Japan is a major investor in India exceeded only by Mauritius and Singapore. Japan’s FDI in India grew sharply in the years since 2007. The purchase of Ranbaxy Laboratories, India’s largest drugmaker, by Daiichi Sankyō, and NTT Docomo’s equity participation in Tata Teleservices caused Japan’s FDI in India to surge to $5,551 million in 2008 on a net flow basis, followed by FDI of $3,664 million in 2009. Subsequently, with the two companies above withdrawing from the Indian market, Japan’s FDI in India has slowed, but the number of companies entering the Indian market has grown steadily from 550 in 2008 to 1,441 in 2018. 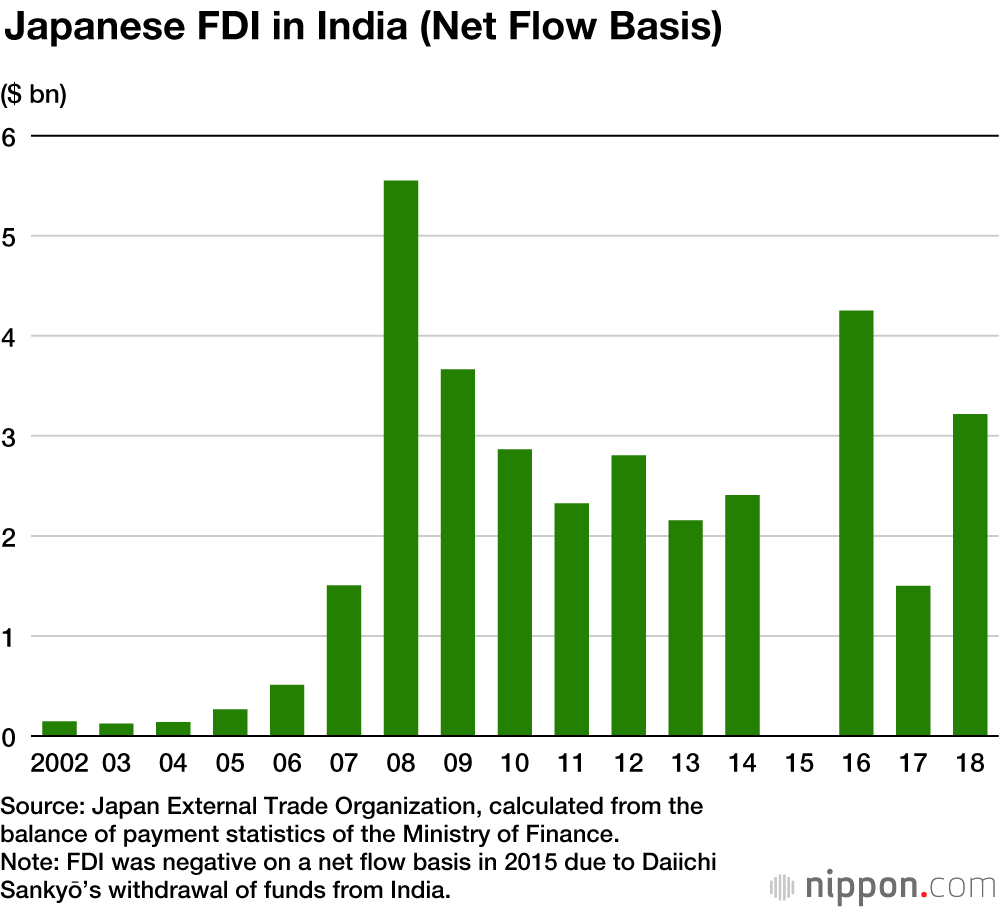 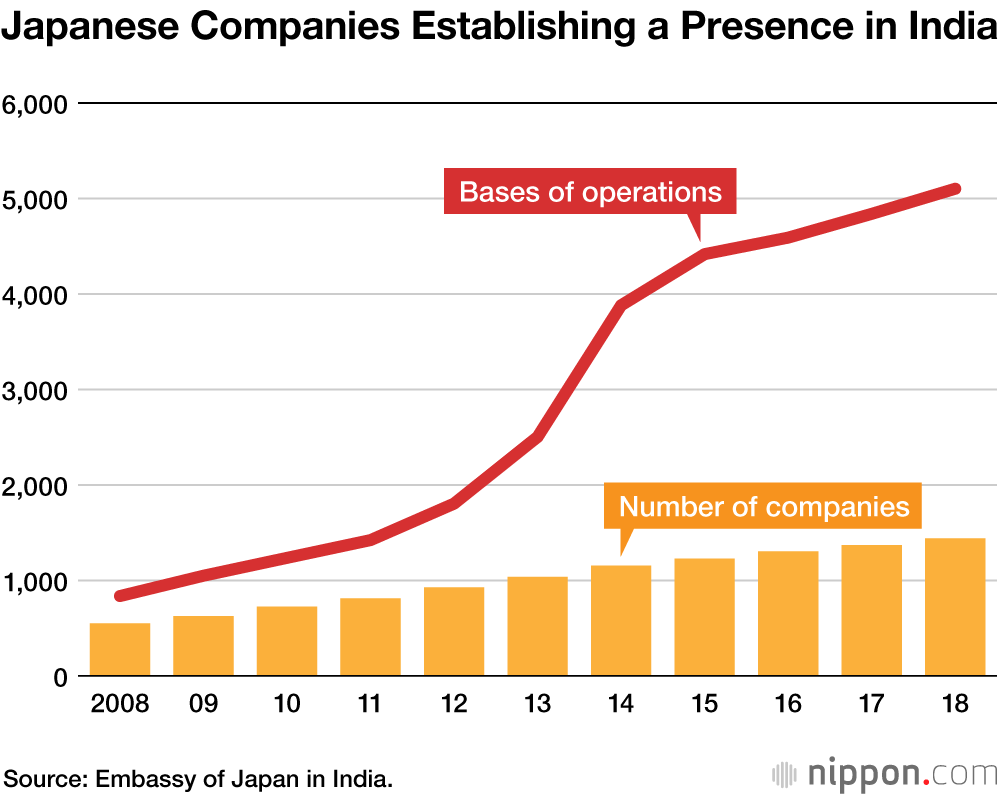 As indicated by Suzuki’s success in India, Japanese automakers’ advance into the market has contributed greatly to raising Indian manufacturing industry standards, such as by increasing workers’ skills and by improving quality control. These changes had the effect of encouraging the advance of Japanese companies into India in such areas as steel, machinery, power generation equipment, and logistics. In the air conditioner sector, Daikin has maintained its position as the top brand. The advance of Japanese companies into India is increasing in a wide range of areas, such as foods, stationery, cosmetics, pharmaceuticals, sanitary goods, and toilet facilities. In the retail sector, Muji of Ryōhin Keikaku opened its first Indian outlet in Mumbai in August 2016, and Fast Retailing opened its first Uniqlo store in New Delhi in October 2019.

A 2019 Japan Bank for International Cooperation (JBIC) survey of Japanese manufacturers with overseas subsidiaries revealed that India ranked first as a desirable place to do business in the long term (the next 10 years) and in the medium term (the next 3 years). The most frequently given reason for India’s attractiveness was the future prospects of the domestic market. Expectations toward India stood out compared to other geographic regions. On the other hand, India ranked lower than many geographic regions in the degree of satisfaction with sales and earnings, a measure of business performance, a metric in which it placed at the same level as Brazil and Russia. Some of the reasons given as issues hindering investments in India were a lack of infrastructure, severe competition with other companies, and a lack of transparency in the application of laws.

A point worth noting in the Japan-India economic relationship is the significant role Japan has played in the development of India’s infrastructure. India was the first recipient of international yen loans that Japan began to provide in 1958. In successive years since fiscal 2004, India has been the largest recipient of Japan’s ODA. A large share of yen loans went for the construction of subway systems. The Delhi Metro that began operating in 2002 is a successful example of the transfer to India of Japan’s operation systems, construction culture, and safety technology. Japan’s support of subway systems has spread from New Delhi to Ahmedabad, Mumbai, Kolkata, and Chennai.

India is developing plans for five industrial corridors. Of these projects, it is the Delhi Mumbai Industrial Corridor (DMIC), a joint Japan-India project with estimated investment between $90 billion and $100 billion, that is drawing attention as the flagship project. With the Western Dedicated Freight Corridor (DFC), a dedicated freight railway, serving as the backbone, the construction of eight Investment Nodes is planned in a belt zone stretching through six states. Currently 18 projects are under way as part of the DMIC. Japan has taken a 26% equity interest in the Delhi Mumbai Industrial Corridor Development Corp., whose board includes two officers sent from the JBIC. Japan initially proposed 19 candidate projects valued at $4.5 billion. Of these projects, a successful case supported by NEC is the Logistics Data Bank, an IT-driven logistics visualization services project. 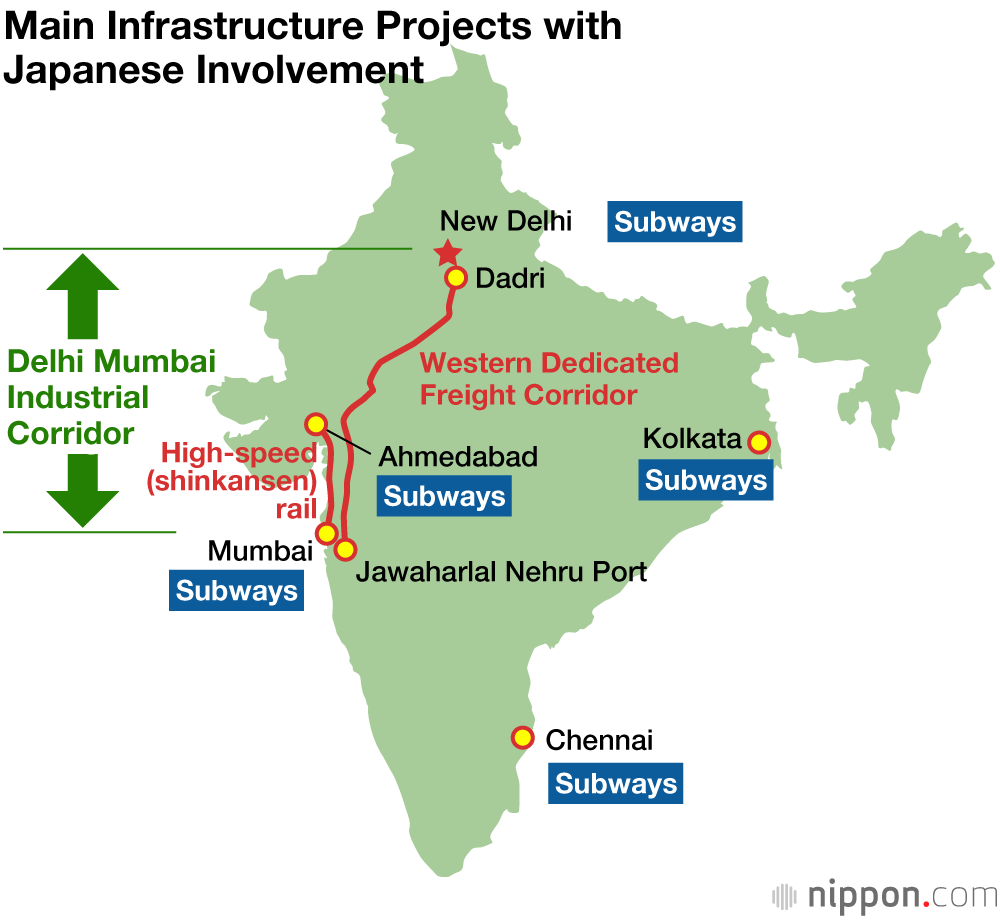 Prime Minister Asō Tarō promised ODA loans for the construction of the Western DFC at the 2008 Japan-India summit meeting. The Western DFC will extend 1,504 km from Dadri (in the Delhi National Capital Region) to the Jawaharlal Nehru Port (JNPT) on the opposite bank of the Mumbai Port. Electric locomotives will transport double-stack containers on a double-track railroad. Freight that took three to four days to travel from Delhi to Mumbai on conventional railways will be able to complete the trip in a single day, and freight capacity will increase 3.6 times per train. The Western DFC project was provided with a ¥731.5 billion loan through the Japan International Cooperation Agency. Based on the Special Terms for Economic Partnership (STEP) loan, more than 30% of the materials used is to be supplied from Japan, and Japanese companies are required to be the main contractors for each railway construction package. India’s Ministry of Railways, however, will handle the electric locomotive project since cost factors made Japanese companies reluctant to participate. As of October 2019, construction is 63% complete for the phase 1 section (Rewari to Vadodara) and 31% complete for the phase 2 section (Dadri to Rewari and Vadodara to JNPT). Although rail service is scheduled to begin by the end of 2021, there is the possibility that it will be delayed.

The construction of the Mumbai-Ahmedabad High-Speed Railway is attracting considerable interest as the new symbol of joint Japan-India projects. The final decision to introduce Shinkansen technology for the above project was made at the Japan-India summit meeting held in December 2015. Japan agreed to cover 80.9% of the total construction cost (¥1.8 trillion) through ODA with the very concessional terms of a repayment period of 50 years (including 15 years of grace period) and an interest rate of 0.1%.

The high-speed railway will be elevated for the entire 508-kilometer distance, as is the case in Japan, and travel time will be reduced from eight to two hours. East Japan Railway will be responsible for the transfer of Shinkansen technology in such areas as rolling stock, operations, and the training of Indian personnel. The planned production of 240 units of shinkansen rolling stock will basically take place in Japan, excepting the case of such rolling stock being widely used on other railway lines.

While construction is to take place from 2018 to the end of 2023, there is still much uncertainty about costs and the expropriation of land. Indian Railways had already acquired 47% of the land needed for the construction of the high-speed railway as of February 2020. However, in the October 2019 election of the Maharashtra Legislative Assembly, the ruling Bharatiya Janata Party (BJP) did not win a majority, and a coalition government led by the regional party of Shiv Sena —which is skeptical about the high-speed railway project—took power. Since regional governments have strong authority over land expropriation, there will be a need to monitor future developments.

What has enabled the start of the large infrastructure projects described above is an institutional framework taking the form of annual summit meetings between Japan and India based on a Strategic and Global Partnership. Whether these projects can be brought to completion will put to the test the value of this bilateral partnership. Finally, the development of mutual understanding through active human exchanges will be extremely important in establishing a foundation for the expansion of bilateral ties. This will be indispensable in increasing Japan’s investment in India and for partnership in information technology. How to strengthen human exchanges is an important issue that should be broadly addressed by industry, government, and academia involved in Japan-India relations so that the lack of such exchanges does not become an obstacle to the enhancement of ties between our countries.