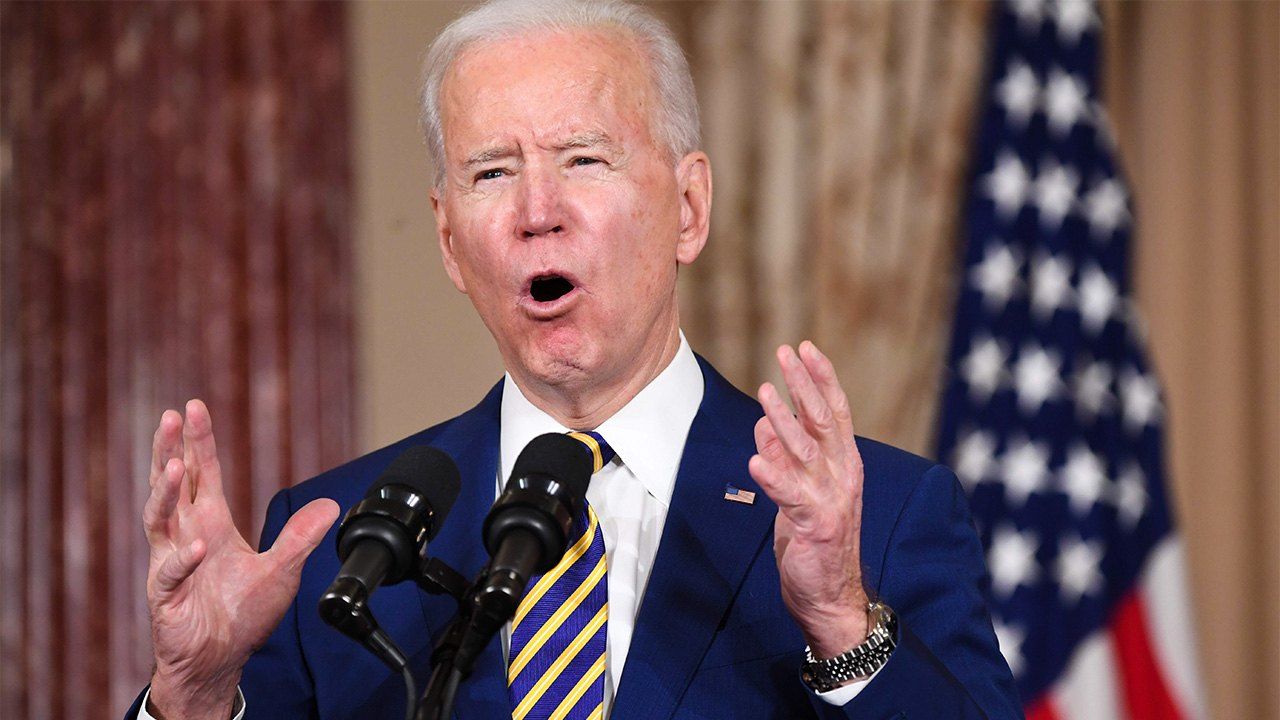 Politics Apr 5, 2021
Although US President Joe Biden has been at pains to contrast his foreign-policy approach with that of his predecessor, the impact of Trump and Trumpism is unmistakable in Biden’s call for “a foreign policy for the middle class,” argues the author, a specialist in American studies and diplomatic history.

On February 4, 2021, US President Joe Biden delivered his first address on foreign policy at the Department of State headquarters. “America is back,” Biden asserted in a speech that clearly conveyed his intent to repair frayed relationships with allies and re-engage in world affairs.

There is no doubt that the speech was intended as a repudiation of the America First policies of Donald Trump, who had scorned multilateral organizations and agreements, disrupted cooperation with allies, and undermined the foundations of the international order. For the most part, the world welcomed Biden’s remarks as heralding a revival of the internationalism to which US foreign policy had previously adhered.

But while Biden’s rhetoric contrasts with Trump’s, there is reason to question whether his foreign policy will differ that decisively in substance. The grounds for this can be boiled down to a phrase that made an appearance in the second half of his speech: “a foreign policy for the middle class.” Where did such a concept originate? How does it relate to Trumpism? Can it be reconciled with the kind of internationalism that Japan and others expect from a Biden administration?

Origins of the Biden Doctrine

In his speech, Biden made the point that there is no longer a clear line between foreign and domestic policy. He reiterated the truism that American strength abroad hinges on the strength of its domestic economy, with the middle class as its foundation. More surprising was his assertion that “every action we take in our conduct abroad we must take with American working families in mind.”

Biden’s embrace of this foreign-policy orientation reflects the influence of US National Security Advisor Jake Sullivan. Although only 44, Sullivan is no newcomer to national policy making, having served in the administration of President Barack Obama as deputy assistant to the president for national security affairs and as national security advisor to then Vice President Joe Biden. More recently, he co-authored a report titled Making US Foreign Policy Work Better for the Middle Class, published last September by the Carnegie Endowment for International Peace, a foreign-policy think tank headquartered in Washington, DC.

The Carnegie report is the result of a two-year study, launched in 2017, by a bipartisan task force of former senior policy makers. The report was based on interviews and focus groups conducted in three states to gather feedback on US foreign policy from middle-income working people living in the American heartland.

Why, one might ask, would an elite Washington-based group of policy makers go to such lengths to solicit the foreign-policy views of middle Americans? They did so out of the somber realization that US foreign policy had for too long been the preserve of a closed, elite circle disproportionately influenced by powerful voices from America’s large coastal cities, and that as a result, it had not only neglected but seriously undermined the interests of ordinary working people in other parts of the country.

It is no accident that the Carnegie study was launched in 2017. That was the year that Donald Trump took office as president after a shocking come-from-behind election victory. Initially dismissed as a political sideshow, Trump had rapidly gathered support from working people in the Midwest and elsewhere with promises to bring back US jobs through tough diplomacy and trade policies that put American interests first. In his inaugural speech, Trump used the term “American carnage” to describe the mounting challenges facing American working families, placing much of the blame on the internationalism that had for so long dominated US foreign policy.

“For many decades,” he said. “We’ve enriched foreign industry at the expense of American industry, subsidized the armies of other countries while allowing for the very sad depletion of our military.” He charged that the United States had defended other nations’ borders while refusing to defend its own and had spent trillions of dollars on other countries while allowing its own infrastructure to decay. “We’ve made other countries rich while the wealth, strength, and confidence of our country has dissipated over the horizon,” he said. From that point on, he pledged, all policy decisions would be made to benefit American workers and American families, especially those left behind by globalization and the rise of digital technology.

Trump’s election laid bare the disconnect between Washington insiders and middle Americans on the subject of foreign policy. The internationalist orientation of the foreign-policy establishment reflected the opinions of political and economic elites headquartered in Washington, New York, and the West Coast, while largely ignoring the views and needs of people in the industrial centers of the Midwest. The gap had widened as globalization and digitalization had triggered a shift in America’s industrial structure, leading to a massive exodus of manufacturing jobs. Trump tapped into a deep vein of popular resentment toward the policy-making elites who had neglected the interests of ordinary working people, and he mobilized that anger for his own political purposes.

The authors of the Carnegie report acknowledged the broad appeal of Trumpism, even while insisting that “the America First approach is not the answer.” Of course, it is questionable how much the working class really benefited from Trump’s policies. But it is a cold, hard fact that Trump amassed tremendous political support by promising relief for the many working families—“the forgotten men and women,” in Trump’s words—who are struggling in today’s globalized economy. It was becoming clear that if the next administration disregarded that fact and reverted to a foreign policy divorced from the interests of middle Americans, their resentment could again be mobilized to support an extreme political agenda.

Reconnecting with the Heartland

To avert such a scenario, it was felt, foreign-policy makers needed to connect with working people outside the Washington Beltway, get a handle on their living conditions and concerns, and formulate policy that reflects their views and interests. With this goal in mind, the Carnegie research team conducted interviews and focus groups with hundreds of people in Colorado, Nebraska, and Ohio, including small business owners, farmers, middle-income workers, state and local officials, and community leaders.

In their September 2020 report, the task force concluded that US government policy as a whole needed to place top priority on rebuilding the middle class. From the standpoint of foreign policy, it warned, that would mean a “somewhat less ambitious” international agenda. That said, the Carnegie task force found little support in the heartland for Trump’s America First nationalism or for the kind of isolationism embraced by Washington between the two world wars.

Ever since the 2016 election, when upsets in the Midwest had played such a critical role in Trump’s victory, there had been a tendency to stereotype working people in the American heartland as nationalists narrowly focused on jobs and pocketbook issues and indifferent to larger concerns, such as international peace. But middle-class Americans are not a monolithic group, as the Carnegie report was quick to point out. In fact, the study found considerable support for less extreme, nonmilitary forms of global engagement, as through foreign aid and support for international organizations.

William Burns, who served as president of the Carnegie Endowment prior to his March 2021 appointment as director of the Central Intelligence Agency, discussed these and other findings in a piece in the Atlantic titled “The Blob Meets the Heartland” (September 24, 2020). “The blob” is an unflattering sobriquet for the US foreign-policy establishment and the network of Washington-based elites that has long held sway over government policy in this area.

In the Atlantic piece, Burns explains that for decades “the blob” had taken for granted the notion that “expansive US leadership abroad would deliver peace and prosperity at home.” In the Carnegie study, he said, key members of this elite group ventured outside of their Washington bubble and solicited the views of middle-class working people in the heartland—fellow Americans who experience and see the same world quite differently.

Burns believes that this effort to reconnect was an important exercise in its own right. It was especially helpful, he points out, because the conversations the team had “showed more nuance, pragmatism, and common sense” than the polarized partisan policy debates common in Washington.

The big question now, however, is how this will all play out in the United States and the wider world under the new administration.

The Biden foreign-policy team is built around experienced Washington insiders, and such a team inspires confidence after the Trump administration’s erratic diplomacy. However, it has also raised concerns among some that Washington will lapse back into its default mode of overextended internationalism, with little concern for the economic consequences to ordinary Americans. This seems unlikely. After four years under Donald Trump, the Washington foreign-policy elite understands that it can no longer afford to ignore the interests of middle-income Americans in the heartland.

It remains to be seen, however, whether the Biden administration can strike a balance between the leadership role the world demands of the United States and the economic interests of its own middle-income working families. Will its “foreign policy for the middle class” be distinguishable in substance from Trump’s America First policy? How, exactly, will it differ? The outcome of this latest course shift will hinge on the Biden team’s seafaring skills over the next four years.