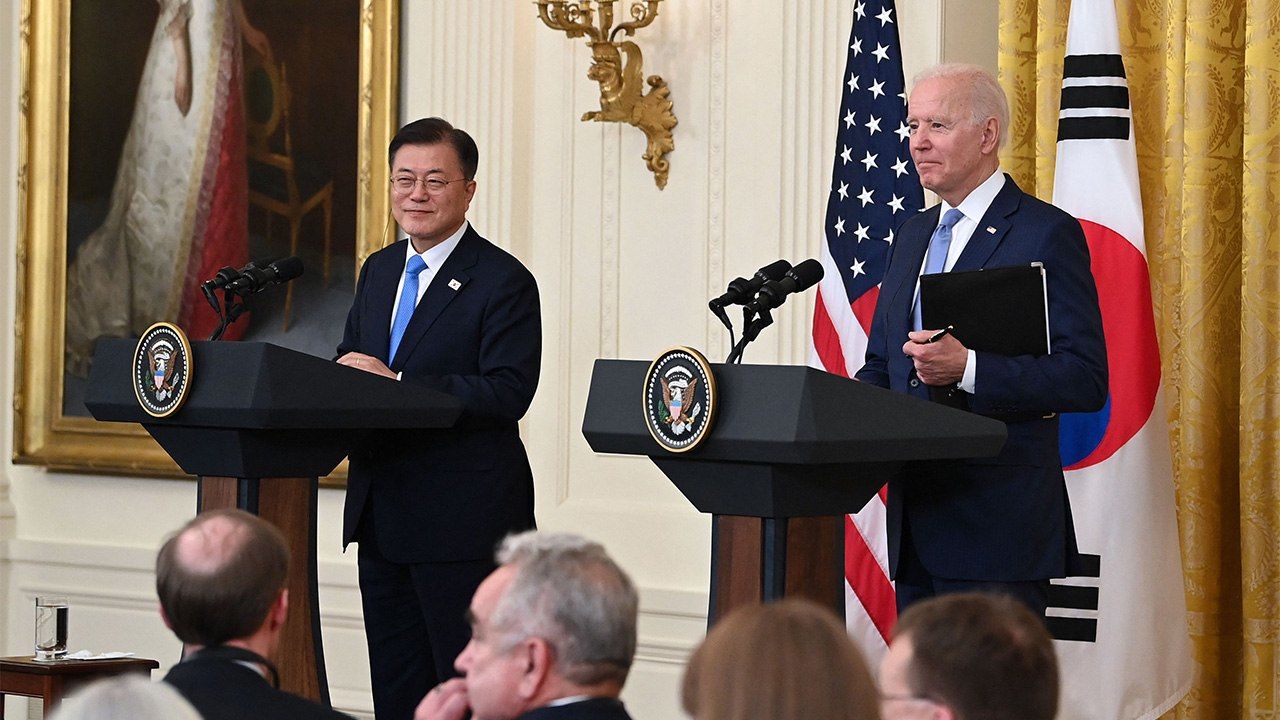 Politics Jul 5, 2021
South Korea has thus far managed to juggle its role as a US ally with its growing economic dependence on China, but the Biden administration’s crusade against autocracy could force a costly reckoning.

East Asia has been a focus of intensifying diplomatic activity in recent months. Driving this acceleration is the new administration of US President Joe Biden, who has clearly identified China as his administration’s foremost strategic concern. This policy emphasis may be a welcome development for Tokyo, but it could pose a serious dilemma for Seoul.

Much has been made of the fact that Japanese Prime Minister Suga Yoshihide was the first foreign head of state to visit the White House for summit talks with President Biden, but there is ample precedent for that. Far more unusual—and therefore more indicative of the Biden administration’s foreign-policy priorities—was the choice of South Korean President Moon Jae-in as Biden’s second official guest. To be sure, the decision may have been influenced in part by the state of the COVID-19 pandemic, which has hit Europe much harder than South Korea. But it was still a highly significant first for Seoul.

The key factor behind both choices, of course, was the Biden administration’s focus on countering the threat of China’s growing power. At his March 2021 press conference, Biden said, “China has an overall goal . . . to become the leading country in the world, the wealthiest country in the world, and the most powerful country in the world. That’s not going to happen on my watch.” In the context of this orientation, consultation with the leaders of Japan and South Korea, America’s allies in Northeast Asia, was necessarily a high priority.

But Washington’s tough stance toward China could prove a serious headache for Seoul, and not just on account of President Moon’s leftist politics. A more fundamental problem is South Korea’s heavy economic dependence on China.

South Korea and Japan both rely on China for about 25% of their international trade volume. But South Korea’s economy is more than twice as trade-dependent as Japan’s, with exports accounting for roughly 40% of its gross domestic product (2019). In short, South Korean industry and the economy as a whole rely heavily on the Chinese market, which is why improving diplomatic relations with China has been such a high priority for South Korean leaders in recent years. That includes conservative politicians—as exemplified by former President Park Geun-hye—who have strong ties with big business.

Given this economic relationship, the Biden administration’s tough stance toward China could present an unprecedented challenge for President Moon Jae-in and his successor. To better understand that challenge, let us briefly review the rise in US-China tensions and Seoul’s response to this point.

A change in Washington’s attitude toward China first became apparent back in 2014, under the administration of President Barack Obama. That shift was triggered by military rivalry, as China flexed its muscles in the South China Sea. Over the next year or so, President Park Geun-hye came under sharp criticism from the United States for continuing her courtship of Beijing amid these tensions. One notable outcome of this was that Park, under pressure from Washington, ended up signing an agreement with Prime Minister Abe Shinzō to end the “comfort women” dispute. (The Obama administration worried that the growing rift between Japan and South Korea over historical issues could hobble US-led efforts to counter the military threat from China.)

President Donald Trump’s administration took a more aggressively anti-Chinese stance. Its concerns were predominantly economic, and its response centered on such unilateral moves as the imposition of punitive tariffs and the designation of China as a “currency manipulator.” In South Korea, there was growing concern about the potential impact of this brewing trade war on the national economy.

Ultimately, however, Seoul has been able to avoid taking sides. The military tensions that broke out between the United States and China during the Obama administration had no immediate repercussions for Seoul (apart from Beijing’s objections to South Korea’s deployment of THAAD missiles, which were directed at North Korea, not China). After all, South Korea, unlike Japan, faced no direct threat from China’s provocations in the South China Sea. The economic tensions that surfaced under the Trump administration were worrying for South Korea, but they did not threaten Seoul’s relationship with Beijing, as Trump had no special antipathy toward authoritarianism and little appetite for cooperation with other democratic nations. Indeed, such was his indifference to ideological issues that he happily tolerated Moon’s pursuit of dialogue with the North.

However, it remains to be seen whether South Korea can maintain the same diplomatic freedom and flexibility under the administration of Joe Biden, for whom military and economic competition are secondary to the existential battle between democracy and autocracy.

Fear and Loathing in America

Public opinion in the United States has turned sharply against China in the last year or so, and the biggest catalyst for that change has been COVID-19. The pandemic has inspired both deep mistrust and fear of the Chinese juggernaut.

The mistrust stems from the Chinese government’s handling of the epidemic in its earliest phases, particularly the secrecy and censorship that allowed the coronavirus to spread outward from Wuhan. The pandemic has claimed in excess of half a million American lives—more than both world wars and the Vietnam War combined. The Communist Party of China, with its tight control over the flow of information, has been widely blamed for unleashing this scourge.

At the same time, many Americans have grown fearful of the Chinese system, given how effective and efficient it was in controlling the infection’s spread after the government’s initial stumbles—especially as compared with America’s fragmented and prolonged battle against the epidemic. Some US observers have gone so far as to remark on the weaknesses of American-style democracy when it comes to coping with such a crisis. Moreover, China, despite being the epicenter of the pandemic, managed to post economic growth even during 2020, when the economies of Japan and all the Western democracies tanked, and it has rebounded strongly, with GDP expected to grow a full 8% in 2021 (according to the International Monetary Fund).

What is clear is that the COVID-19 pandemic has heightened Americans’ consciousness of the differences between their system of government and China’s, and that this is the environment in which the Biden administration’s hard line on Chinese autocracy took shape. Inevitably, this has had an impact on Washington’s East Asia policies.

Epitomizing the change is the emergence of the Taiwan problem as a key foreign-policy issue. If America’s beef with China were purely economic or military in nature, Washington would not be nearly so concerned about the fate of Taiwan. But once US-China animosity is reframed as a conflict between democracy and authoritarianism, the Taiwan problem takes on a different complexion entirely. Abandoning Taiwan would mean abandoning the democratic system that the people of Taiwan have built and sustained since the 1990s. In an echo of the “domino theory” that drove Washington’s East Asia policy during the Cold War, some have expressed concern that other countries in the region might waver in their commitment to democracy when confronted with the CPC’s apparent success at governing and managing the economy.

This recasting of the US-China rivalry as an ideological conflict could put Seoul in a difficult position. South Korea is proud of its democratic government, established in response to a massive popular uprising in 1987. It can scarcely stake out a neutral, on-the-fence position in an escalating battle between American democracy and Chinese authoritarianism.

With this in mind, there was deep alarm in South Korea ahead of the May US-ROK summit. The concern was that Biden would force Moon to “renounce” China by joining in Washington’s condemnation of Chinese trade, maritime, and human-rights practices. Those fears proved unfounded; the joint statement issued by the two leaders made no direct mention of China, nor did Biden call on Seoul to cooperate with the countries of the Quadrilateral Security Dialogue (Australia, India, Japan, and the United States) in a “Quad Plus” partnership encircling China.

But this reprieve is likely to be short-lived. Although the Biden administration was quick to announce its basic strategic guidelines, it is still hammering out concrete policy measures in support of that strategy. This is the basic reason Biden refrained from making specific demands of Moon vis-à-vis his policies toward China and North Korea. Eventually, though, Seoul will come under pressure to take a stand.

In the 1970s, as détente with Communist China progressed, the United States turned its back on Taiwan and South Vietnam, and South Korea was facing the same fate. Americans were unwilling to invest much in the defense of poor, divided countries ruled by authoritarian regimes. Today, South Korea is a major economic power and a proud democracy. Ironically, its very membership in this club of advanced democracies is embroiling it in an ideological conflict it would much prefer to avoid

How will Seoul balance its relationships with Washington and Beijing in response to a rivalry that some have termed the “new Cold War”? Will President Moon, who is nearing the end of his single five-year term, be obliged to change course? Or will he leave the task to his successor, to be decided in the March 2022 election? In either case, South Korea will face tough choices in the months and years ahead.

(Originally published in Japanese. Banner photo: South Korean President Moon Jae-in, at left, with US President Joe Biden at a press conference following their summit talks at the White House on May 21, 2021. © AFP/Jiji.)