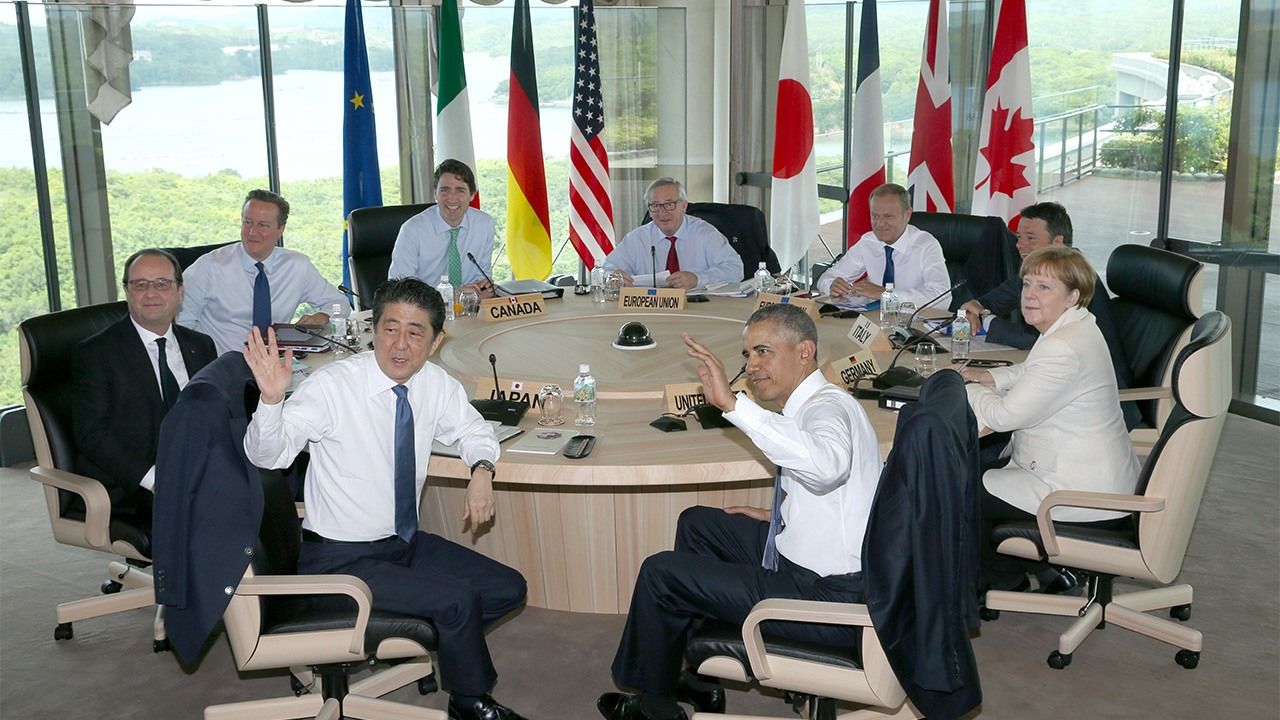 Japan and the Challenge of Human Rights Diplomacy

Politics Sep 1, 2021
Tokyo is under mounting pressure to take a stand against human rights abuses in China and elsewhere, breaking from a laissez-faire tradition going back 70 years. Hosoya Yuichi traces the evolution of postwar Japan’s foreign-policy doctrine, from Yoshida Shigeru to Abe Shinzō, and considers the path ahead.

Human rights diplomacy is back in the news, and this time Japan is taking note.

It was back in December 1948, in the early days of the Cold War, that the UN General Assembly adopted the Universal Declaration of Human Rights. The International Covenant on Civil and Political Rights and the International Covenant on Economic, Social, and Cultural Rights, both ratified by Japan in 1979, further cemented the importance of human rights as a basic norm of international society. Yet it is only in the past few years that human rights issues have begun to figure prominently in discussions of Japanese diplomacy. In the following, I examine the origins and consequences of Japan’s longtime neglect of human rights diplomacy and take a look at recent developments in the context of broader international trends.

Prime Minister Yoshida Shigeru set the tone for Japan’s postwar foreign policy while the nation was still under occupation. The Yoshida Doctrine, as it is known, was a highly pragmatic national strategy that concentrated on building up the Japanese economy while relying heavily on the United States for national security. In the context of foreign policy, this translated into a narrow realism centered on the material values of economic and military might. Such ideals as democracy and human rights, though central to Japan’s own postwar Constitution, were considered essentially irrelevant to its dealings with other countries.

For decades thereafter, Japan’s foreign policy continued to focus on bolstering military security by strengthening the Japan-US alliance and on boosting the economy via trade. As a result, Japanese diplomacy has displayed, at best, a dim awareness of the fundamental importance of human rights in the liberal international order, and it barely registered the rise of human rights diplomacy from the 1970s on. In fact, the prevailing attitude toward human rights diplomacy within the Ministry of Foreign Affairs (MOFA) was one of deep cynicism.

Japan’s relationship with South Africa is a case in point. From the 1970s on, international criticism of South Africa’s white minority rule and apartheid policies intensified, and the international community stepped up pressure on the government through boycotts and sanctions. Japan, however, had no compunction about expanding trade with South Africa and in fact emerged as the country’s biggest trading partner during the 1980s.

The same economic pragmatism governed Japan’s reaction to the Tiananmen Square Incident of 1989, when the Chinese government cracked down violently on pro-democracy protesters. In the immediate aftermath of the incident, when the Group of Seven was deliberating a unified response, Japan alone opposed joint sanctions against China. As one of China’s most important economic partners, Japan was ideally positioned to ramp up pressure on Beijing by coordinating with the other leading democratic powers. But it let the opportunity slip and turned a blind eye to China’s flagrant violation of human rights.

The internal organization of MOFA and the content of the Diplomatic Bluebook it publishes each year both testify to the foreign-policy establishment’s low regard for human rights diplomacy. The path to advancement in the ministry has always been through the International Legal Affairs Bureau (treaties) or one of the major regional affairs bureaus. The Bluebook rarely makes more than passing mention of human rights issues. Even in the wake of the Tiananmen Square Incident, when international criticism of the Chinese government was at its height, the 1990 Diplomatic Bluebook refrained from any outright criticism of the actions taken against demonstrators and pro-democracy activists. While acknowledging that the incident had damaged China’s international image, it blithely echoed Beijing’s own reassurances by stressing that “in January 1990, martial law was lifted in Beijing, and in May the martial law in Lhasa City that had been proclaimed since March 1989 was also lifted.”

Yoshida’s narrow focus on economic ties and the Japan-US security alliance continued to dominate Japanese foreign policy until the advent of “values-oriented diplomacy” under the first administration of Prime Minister Abe Shinzō, formed in September 2006. The main architects of this new strategic emphasis were Vice-Minister for Foreign Affairs Yachi Shōtarō and Kanehara Nobukatsu, head of the Foreign Policy Bureau’s Policy Coordination Division. Both were to play key policy-making roles under the second Abe administration (2012–20) as well.

Minister for Foreign Affairs Asō Tarō formally introduced the concept in a speech titled “Arc of Freedom and Prosperity: Japan’s Expanding Diplomatic Horizons,” delivered to the Japan Institute of International Affairs on November 20, 2006. Asō's remarks on that occasion were quite unlike the bland, wishy-washy bromides to which Japanese foreign ministers usually confined themselves. The speech was drafted not by a cadre of career bureaucrats but by a former journalist, Deputy Press Secretary Taniguchi Tomohiko (later to become special cabinet advisor under the second Abe administration), and the clear message it conveyed clashed sharply with mainstream MOFA thinking.

“Today,” said Asō, “I am going to be speaking on the topics of ‘values-oriented diplomacy’ and ‘the arc of freedom and prosperity.’ Both of these are new bases for our foreign policy and new expressions at that, but I very much hope that you remember these two phrases when you leave here today.”

Elaborating a bit, Asō explained that values-oriented diplomacy meant diplomacy aimed at advancing such “universal values” as “democracy, freedom, human rights, the rule of law, and the market economy” (the same universals cited by Vice-Minister Yachi in his explanations of values-oriented diplomacy). Although such an emphasis may not seem particularly controversial, the idea of placing those values at the core of Japanese diplomacy elicited quite a backlash, and not only from within the Foreign Ministry.

Despite such resistance, values-oriented diplomacy gained traction under the first and second Abe administrations, adding a new dimension to a foreign policy long dominated by the Yoshida Doctrine. The new orientation assumed a more concrete form with Japan’s Free and Open Indo-Pacific initiative. Proposed in 2016, the strategy has since won the support of the United States, Britain, the European Union, Australia, India, and the Association of Southeast Asian Nations.

From “Values” to Human Rights

Contrary to what one might expect, however, the new doctrine has not translated into a strong commitment to human rights diplomacy. Values-oriented diplomacy was aimed at strengthening and expanding the community of democratic nations, not at calling out governments for human rights abuses. Japan’s response to instances of persecution, political repression and other human rights abuses—or its lack thereof—remains a thorny issue.

In just the past year, Tokyo has come under criticism for its tepid stance on major human rights violations in China and Myanmar, countries with which Japan has built close economic ties. At issue in particular are China’s brutal repression of its Uighur minority and the Myanmar army’s government takeover and use of deadly force against the populace. Amid outrage over policies toward the Xinjiang Uighurs that many regard as genocidal, Japan has also been criticized for refusing to sign the Convention on the Prevention and Punishment of the Crime of Genocide.

One reason Japan is susceptible to such criticism is that it has not created the legal framework it needs to match the response of other leading democracies. Unlike the United States, Canada, Britain, and the European Union, it has no “Magnitsky legislation” (named after the US Magnitsky Act of 2012) allowing the government to punish individuals or organizations regarded as human rights offenders by sanctioning them, freezing their assets, and banning them from entering the country.

This is one reason Diet politicians have begun to seize the initiative on the issue of human rights diplomacy. In February this year, the ruling Liberal Democratic Party launched a Human Rights Diplomacy Project Team, which released a set of preliminary recommendations on May 27.

The document gives high marks to Abe’s values-based diplomacy as “a move consistent with the international trend toward a stronger insistence on respect for human rights.” But it calls for further progress in human rights diplomacy, insisting that it is in the national interest, and argues that appropriate “mechanisms” must be created if Japan is to take the next step.

Underlying these moves is a worldwide trend. Globally, the tide is turning strongly toward human rights diplomacy. In the United States, there is solid bipartisan support for a tough response to human rights violations in China; this is one issue on which the current Democratic administration of President Joe Biden agrees with the previous Republican administration of Donald Trump. The European Union, long reluctant to jeopardize profitable economic ties with China, has also begun to speak out and take action. As this trend gathers steam, there is a growing feeling that Japan cannot afford to be the lone holdout.

Certainly Japanese diplomacy cannot lapse into the cynical mercantile realism of the past. But we must also avoid the opposite extreme of following the West in lockstep and using sanctions to force Western values on non-Western countries. Japan must harmonize its foreign policy with current international trends in human rights diplomacy, even while continuing to advance its own economic interests. Surely we can pioneer our own approach, leveraging engagement and cooperation to promote universal values and improve the human rights situation around the region. That must be our goal going forward.

(Banner photo: Prime Minister Abe Shinzō, far left, at a working session of the May 26–27, 2016 Group of Seven Ise-Shima Summit, where the G7 leaders reaffirmed their common commitment to “freedom, democracy, the rule of law, and respect for human rights.” © Jiji.)