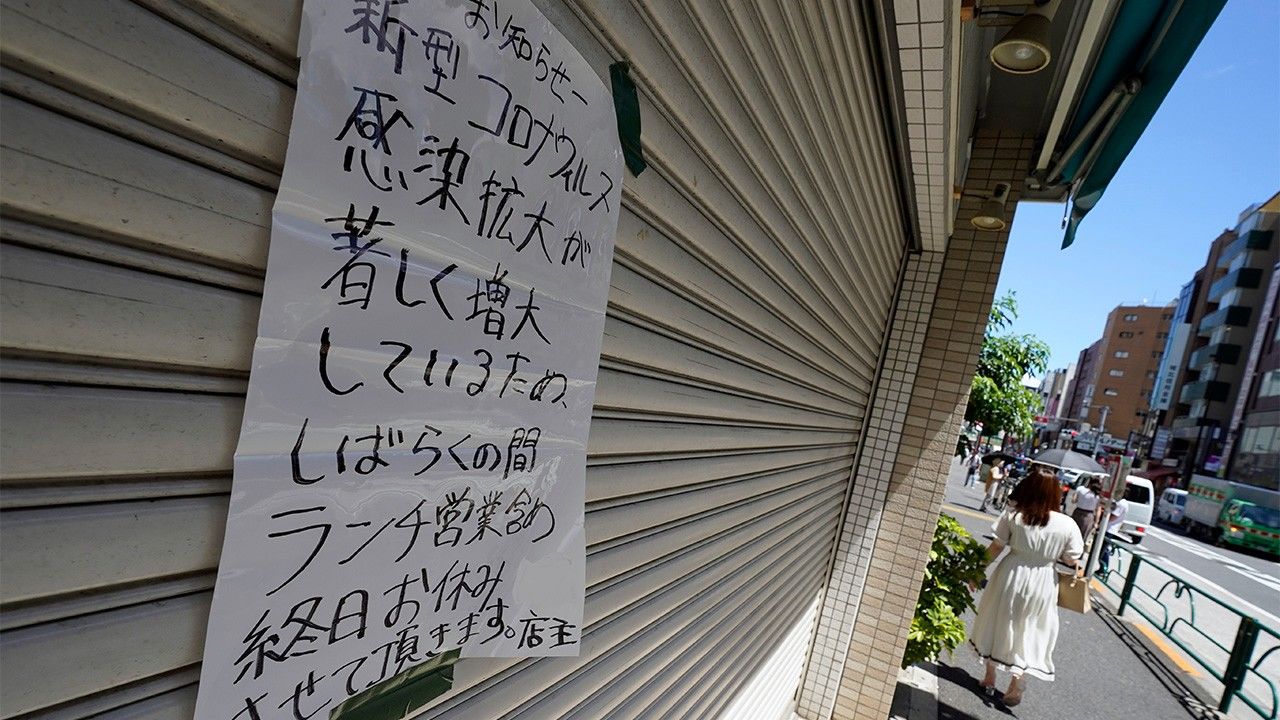 Finding a Way Out of Japan’s COVID Crisis: Could the US Hold the Key?

Economy Health Work Society Sep 21, 2021
The COVID-19 pandemic continues to rage around the globe, and whether countries sink or swim has a lot to do with their rates of vaccination and their uptake of information technology. Veteran economist Takemori Shunpei gives his take on the outlook for Japan’s economy.

COVID-19 is both a pandemic and an issue of global dimensions. Let us start our discussion there. Around the world, this virus has dealt a blow to businesses that require face-to-face contact to operate, while the impact on businesses that are able to use IT to have their employees “telecommute” has been more limited. This has widened the “digital divide”—a phenomenon that has existed since before the pandemic in which those with access to IT tend to earn more than those without. This is no coincidence.

People are saying that COVID-19 symbolizes the “dark side” of globalization. However, globalization’s dark side, that is, its tendency to exacerbate social divisions within developed economies, dates to long before the pandemic. This issue has manifested itself in particular in relation to the flow of people across borders, including notably migrants and refugees. The problem is especially pronounced in Europe, where an influx of Syrian refugees damaged outgoing German Chancellor Angela Merkel’s authority and cast a stark impact on the political landscape of her country. The fact that former US President Donald Trump made the construction of a wall along the Mexican border an election pledge shows that, in some quarters, opposition to immigration had reached boiling point in America as well.

However, by applying IT to these situations, it becomes possible to use foreign labor forces remotely to benefit of one’s own economy. The global supply chain is nothing other than telecommuting on a global scale. In other words, IT has played an important role in reducing the social divisions created by globalization, by reducing the face-to-face contact between workers of different nations, languages, races, and religions.

With this in mind, let us now rethink the assessment that COVID-19 represents the dark side of globalization. The virus cannot be transmitted over a fiber-optic cable. Rather, COVID-19 infection is triggered by person-to-person contact, in particular contact with persons from regions prone to infection. In other words, the pandemic happened precisely because gaps still exist in our IT-based international system that allows us to do business without coming into contact with those from different linguistic, cultural, and religious backgrounds—because of the existence of a “dark zone” that has been left behind despite globalism’s advances. COVID-19’s historical significance is the way the pandemic has, both in Japan and overseas, decreased the economic value of activities requiring person-to-person contact, while increasing the value of noncontact activities performed via digital networks.

Let me make one more important point from a global perspective. It concerns the balance of power between leading Western nations and industrialized Asian nations. The emergence of two factors—the delta variant of the SARS-CoV-2 virus and the vaccine—significantly changed this balance of power. Until around autumn 2020, that is, after the outbreak of the pandemic but while the delta variant had yet to rear its head and a vaccine was still only a possibility, Asian nations experienced much lower rates of infection and death than many of their advanced Western counterparts, and this difference dictated the global economic order. Asian societies’ discipline and use of surveillance was praised as having staved off the ill-effects of the pandemic, to the point of making some say that there was now an even stronger feeling that the twenty-first century was Asia’s century.

Despite being the epicenter of the COVID-19 outbreak, China managed to rein in infections by carrying out increased monitoring of its citizens, and was the only major economy to grow last year. One wondered if the negative side of authoritarian China had actually worked in its favor. By contrast, the pandemic was a disaster for the West, with many major European countries losing hundreds of thousands to the disease, and the United States recording over half a million deaths. Leading Western nations focused on developing vaccines as a way of recovering from the brink of destruction. Spurred on by the healthcare systems of European welfare states, record US healthcare costs that approached 20% of GDP, basic research capability built over the many years of developing the yet-to-be-perfected HIV vaccine, and advanced capital markets that were able to raise huge amounts of cash, the researchers succeeded, and in 2021 inoculations using new mRNA vaccines began.

At around the same time, the delta variant—which is 50% more infectious than earlier forms of the virus, putting COVID-19 on a par with chickenpox—took over as the dominant strain globally. In Asia, even countries like Taiwan and Vietnam that had thus far managed to keep covid cases miraculously low saw a sharp increase in infections. Formerly, these countries’ success in suppressing the virus made them less interested in rolling out the vaccine. This attitude has now become a liability.

The Chinese authorities were intent on developing their own vaccine against COVID-19. However, it remains to be seen whether Chinese vaccines, which perform poorly in clinical trials, will be effective against the original viral strain, let alone delta. As the number infected with the delta variant increases, the Chinese authorities have imposed even stricter restrictions on overseas arrivals. This has contributed to a decline in economic activity, which until then had been strong.

Japan’s Response: Too Little, Too Late

Based on the above assessment of the international situation, let us now consider the Japanese experience. In terms of the first factor, the flow of people across borders, Japan’s level of international arrivals has been far lower than those seen in the Middle East, North Africa, or for that matter Europe, where movements within the region have been a very important factor in the spread of the disease and impact on economies. We can say that the magnitude of the outbreak and the effect on Japan’s economy have therefore been relatively small. Of course, the restrictions have also meant less money is being spent by Chinese tourists, and on several occasions the Japanese authorities have requested bars and restaurants to close voluntarily, albeit using measures less strict than the lockdowns seen in Europe. One such state of emergency is still in place at the time of writing. This has had a not insignificant effect.

The extent to which voluntary closures are effective depends on the level and swiftness of compensation by the government, however. It cannot be denied that in Japan’s case, the swiftness of compensation payments in particular was an issue. The fact that European-style lockdowns were not an option to the government also necessitated protracted voluntary-based measures, which may have increased the blow on bars, restaurants, and hotels.

Meanwhile, Japan’s manufacturing sector saw strong performance led by exports. This led to unexpectedly robust economic performance. It appears that the global supply chain (global telecommuting, as described above) served as an “antibody” against globalization’s dark side, or the pandemic. However, healthy trade performance also highlighted the weakness of Japan’s manufacturing sector. Japan’s semiconductor industry, which used to supply half the world’s demand, has become greatly weakened. This trend began with the March 2021 fire at a Renesas Electronics factory, a disaster that highlighted the vulnerability of the automotive semiconductor supply chain. This in turn led to a re-examination of the full scope of the sector’s underlying issues, highlighting the difference in capability between Japanese manufacturers and Taiwan’s TSMC, which boasts unparalleled competitiveness in semiconductor microfabrication.

Japan’s low level of international arrivals compared to Europe, along with dramatically reduced inbound tourism, served as a factor in mitigating the negative impact of COVID-19. In Asia, however, small nations like Taiwan remained focused on international marketing activities, in which intraregional business trips are key to economic growth, thereby successfully maintaining the vast sales channels (and therefore vast markets) that serve as the base for mass production.

Another unexpected effect of the pandemic was that it revealed the negative effects of the failure of Japanese corporations to market themselves internationally for many years. The Japanese government currently places harsh restrictions on overseas arrivals. The fact that this is not producing serious issues in the domestic economy might be indicative of the real problem facing Japan.

Prospects for a US-Led Recovery

After the global recession caused by the great financial crisis of 2008, the Chinese economy, which, recovered before that of any other nation on the back of extensive public investment, led the global economic recovery. People hoped the same thing would happen this time, too. However, between the delta outbreak and poorly performing Chinese vaccines, the future is anybody’s guess.

Instead, a scenario of a global economic recovery driven by the United States, a nation reining in the pandemic by encouraging its citizens to get inoculated with highly effective vaccines while spending over $2 trillion to stimulate consumption, is looking more likely. Starting in 2002, Japan made its way out of a “lost decade” of stagnant growth by way of an export-led recovery fueled by a major economic stimulus package in the United States. With the Biden administration prepared to use even greater levels of economic stimulus to overcome the current crisis, Japan’s manufacturing sector can again expect to enjoy the benefits of this policy.

There is one point of concern, however. Asia, with its slow vaccine rollout, has begun to see a constricted component supply in the manufacturing sector. This has caused Japanese manufacturers to experience a new crisis, as exemplified by Toyota’s August 19 announcement that it was cutting September production by 40%, showing just how serious the problem is. In Vietnam, Malaysia, the Philippines, Thailand, and other Asian production hubs significant for Japanese corporations, infections continue to rise.

Thus far, the Japanese government has gained confidence by indicating a willingness to cooperate actively with the US approach by way of green policies and the like, and has been successful in securing shipments of US-made vaccines. Indeed, the percentage of the population that is vaccinated has risen markedly. Of course, with the highly infectious delta variant on the loose, it will take more than vaccination alone to take us back to business as usual. We will soon start to hear calls for not only an acceleration in the vaccine rollout but policies that strengthen controls on movement.

In future months, the encouragement of other Asian countries to ramp up their vaccination programs simultaneously, and in particular the encouragement of leading Western nations to supply vaccines to the Asian industrial nations with which Japan has strong economic ties, will be an important theme in Japanese diplomacy.