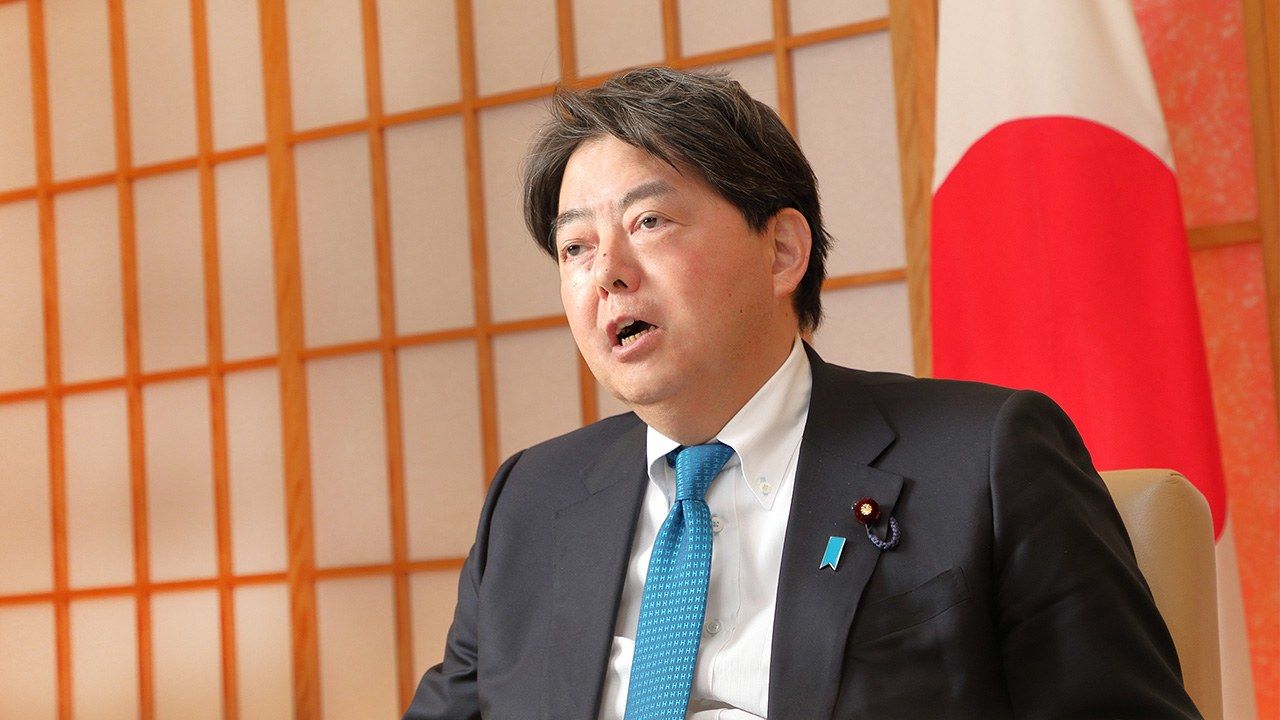 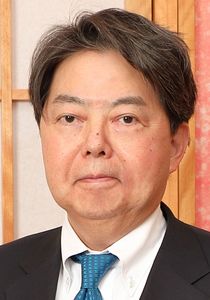 Minister for foreign affairs and House of Representatives member from the Yamaguchi 3 electoral district. Born in 1961; graduated from the University of Tokyo in 1984 before entering Mitsui & Co. Worked as political secretary for his father, Minister of Finance Hayashi Yoshirō. Received his MPA from Harvard University’s John F. Kennedy School of Government in 1994. First elected to the House of Councillors in 1995 and served five terms before being elected to the House of Representatives in 2021. Previously served as minister of defense, minister of agriculture, forestry, and fisheries, and minister of education, culture, sports, science, and technology.

TAKENAKA HARUKATA  Prime Minister Kishida Fumio has characterized his diplomatic approach as “Realist Diplomacy for a New Era.” Meanwhile, in your recent foreign policy Diet speech, you emphasized the importance of “three determinations” and a balanced and stable diplomatic posture with a “high level of readiness.” Could you explain in detail what these ideas mean?

HAYASHI YOSHIMASA  The underlying premise is that the world is rapidly changing. This is epoch-making change. For a while after the end of the Cold War, a generally optimistic outlook for international relations prevailed. Things did not develop as expected, however, and challenges to the universal values and the international order that have underpinned the world’s peace and stability have increased in severity.

Furthermore, economic factors are increasingly impacting national security. In light of these developments, and in recognition of the current situation, the Kishida cabinet will build on the diplomatic assets tirelessly fostered by our predecessors─namely the world’s trust in Japan─ to pursue realist diplomacy underpinned by “three determinations”: the determination to fully defend universal values, the determination to fully safeguard the peace and stability of Japan, and the determination to contribute to humankind and take on a leadership role in the international community. As foreign minister, I want to open up new frontiers for Japanese diplomacy through a balanced and stable posture with high level of readiness.

TAKENAKA  What are you trying to communicate by emphasizing “realism”?

HAYASHI  I am not sure if my interpretation of Prime Minister Kishida’s words will do them justice, but I can reflect on what former prime ministers like Ōhira Masayoshi and Ikeda Hayato said and wrote. Prime Minister Ōhira, for example, spoke of “perpetual incrementalism,” and while he was committed to his ideals, he was also constantly focused on what could be done in the “here and now.” Not only for diplomacy, but also for domestic politics, I think the word realism implies “making decisions realistically.”

In connection with the balanced and stable posture with high level of readiness, it helps to think about tennis. When returning a serve, tennis players prepare themselves by lowering their hips. This creates momentum that allows rapid and explosive power. On the other hand, if their center of gravity is too high, the players can easily lose their footing. This mindset is essential if we are to open up new frontiers in response to the rapid, epoch-making changes we are currently witnessing.

The Bilateral Alliance: Doing What We Can for Ourselves

TAKENAKA  You have talked about strengthening the US-Japan alliance, reiterating that it is “the cornerstone of peace and prosperity in the Indo-Pacific region.” In concrete terms, how will you strengthen this relationship?

HAYASHI  Considering the current international situation, we should first of all do what we can do for ourselves. With this mindset, since Abe Shinzō took office, we have developed legislation for peace and security. We will also secure necessary funding for Japan’s defense budget. Through these efforts, we will work to deepen communication between the United States and Japan at all levels, including at the leadership and ministerial levels.

In terms of “doing what we can do for ourselves,” it’s not only about reinforcing our defense capabilities, but also about diplomacy. When I first became a Diet member, Japan was often referred to as the “junior partner” in the alliance. This was at the time when the United States was the overwhelming and sole superpower. However, since then, the relative power of the United States has been in decline. It is important to consider contemporary trends. The administration of President Joe Biden is said to be taking an “Allies First” diplomatic stance. We cannot miss this opportunity to strengthen the alliance. 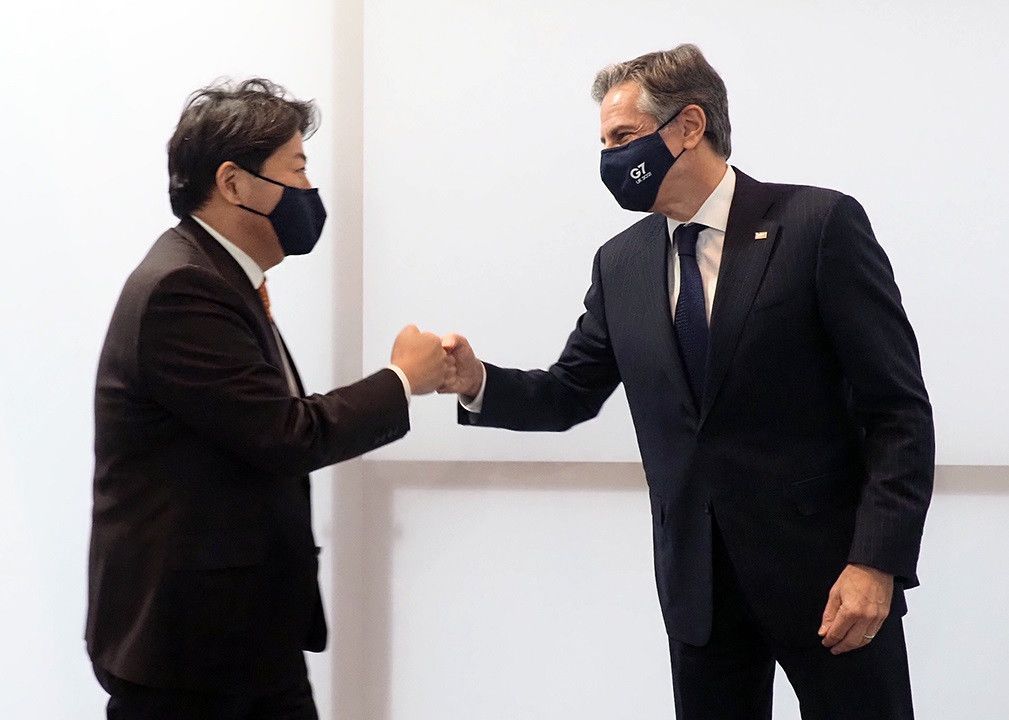 Japanese Minister of Foreign Affairs Hayashi Yoshimasa (left) and US Secretary of State Antony Blinken greet each other at the G7/US-Japan Foreign Ministers’ Meeting (December 11, 2021) in Liverpool, Britain. (© Jiji Press; courtesy of the Ministry of Foreign Affairs)

TAKENAKA  The Kishida administration has also emphasized economic security and the need to cooperate with allies and like-minded countries on securing strategic technology and material supply chains. What kind of consultations will you have with the United States regarding the scope and structure of cooperation?

HAYASHI  Three years ago, the Liberal Democratic Party established a Strategic Headquarters for the Creation of a New International Order. Akira Amari, former minister of economy, trade, and industry, chaired the group, and I was its vice-chair. Yamagiwa Daishirõ and Kobayashi Takayuki were the secretary general and executive officer, respectively. Yamagiwa is now the minister responsible for economic revitalization and for economic and fiscal policy, while Kobayashi is the minister responsible for economic security in the current cabinet. In May last year, this LDP group released an interim summary─a recommendation for the Basic Policy on Economic and Fiscal Management and Reform 2021─which was very close to the final document. We argued that it was necessary to lay the groundwork that would help Japan maintain “strategic autonomy and strategic indispensability.” The next step is to submit the bill to the Diet.

We need to have this legislation in place. As the Basic Policy on Economic and Fiscal Management and Reform 2021 says, we will pass basic laws and then work on building robust supply chains, enhancing the reliability of our core infrastructure, and other key tasks.

Currently, I don’t think we can say exactly what we will work together on with the United States, but in terms of the notion of strategic indispensability, we must maintain our scientific and technological capabilities and industrial competitiveness so that other countries think, “we need to maintain good relations with Japan.” We also need to strengthen our economic and technological power as a nation, as well as maintain economic security. After all, it’s important to avoid a situation where we gradually lose things to protect, even while building means to protect them.

Therefore, it’s essential that we strengthen research on new and advanced technologies. While doing this, we will protect these technologies with a secret patent system and other measures. We’ll also explore harmonizing our standards with those used overseas by our allies and other like-minded countries. For example, the government launched the Competitiveness and Resilience, or CoRe, Partnership with the United States during last year’s summit between Prime Minister Suga Yoshihide and President Biden. This is an agreement to work together to strengthen competitiveness in important technology areas like the digital field, as well as to promote innovation and reinforce supply chains. Building on planned new economic security legislation, we would also like to coordinate efforts and collaborate with like-minded partners such as Australia and European countries.

TAKENAKA  US Trade Representative Katherine Tai recently expressed her intention to launch a new economic framework with allies and partner nations in the Indo-Pacific region. What kind of framework is the Japanese government interested in, and is there a connection to economic security? Will the Japanese government try to persuade the United States to return to the Trans-Pacific Partnership (TPP)?

HAYASHI  I met with Trade Representative Tai in November last year, and we discussed the issue. The United States intends to express a positive commitment to maintaining and enhancing economic order in the Indo-Pacific region. We welcome this stance. Within this framework, the United States identified areas for cooperation including digitalization, infrastructure, and supply chain resilience, but they are still at the “suggestions” stage. I expect more concrete proposals will be forthcoming. Japan will also have its own specific proposals economic security.

We have consistently urged the United States, at all levels, to return to the TPP. During my meeting with Trade Representative Tai, we talked about a lot of things, starting with how much difficulty I faced during trade discussions when I was minister of agriculture, forestry, and fisheries! [Laughs] We mentioned this to Commerce Secretary Gina Raimondo and Secretary of State Antony Blinken as well. We must continue these efforts.