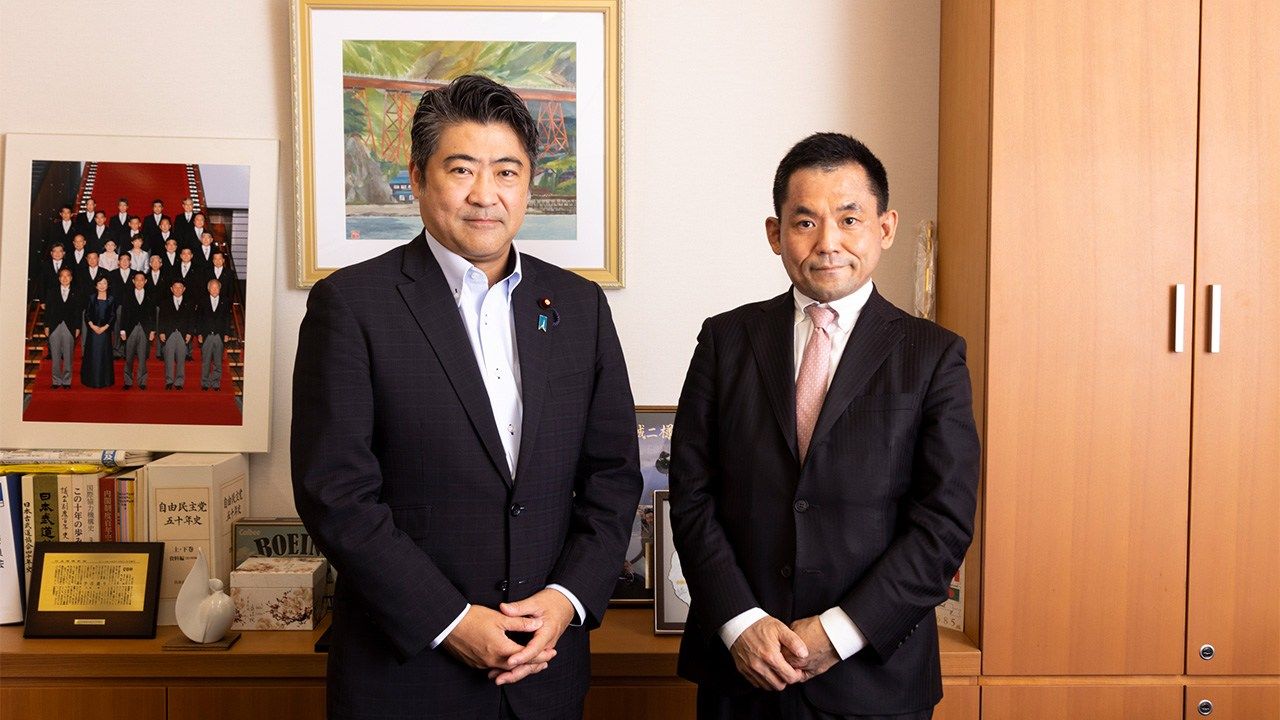 Economic Security and the New Capitalism

KIHARA SEIJI  The basic thinking behind the New Capitalism is twofold. First of all, we’re trying to promote the further development of capitalism in Japan. Capitalism has passed through several phases, from laissez-faire to welfare capitalism and most recently to neoliberalism, and we believe the time has come to upgrade to a new version. Until now, the pendulum has tended to swing back and forth between the government and the market, but under the new version of capitalism, we’re calling on the government and the market to work together.

Take green innovation, which we’re pursuing as a model for early-stage investing. The government commits itself to a substantial investment in green technologies and identifies certain target areas, such as modernization of the power grid and development of battery-storage and hydrogen-fuel technologies. Having presented the government’s basic policy, we wait for businesses to invest. We’re trying to build a new economic model that doesn’t choose between government and the market.

The second overarching purpose of this upgrade is to enable us to defeat authoritarianism. Under a democratic system, economic liberalism inevitably results in inequality, and if the disparities grow too large, democracy ceases to function properly. Social division and stratification have become a serious challenge for American democracy, for example. An authoritarian government is better able to suppress and control this kind of conflict. Unless we can correct the defects in our own capitalist system, we may not be able to win out over authoritarian regimes. We want the public and private sectors to work together to fix those problems so that we can exert more global influence to counter authoritarian states.

Returning to your question, economic security policies are essential if we’re to achieve this goal. We can’t stand up to authoritarian countries if we depend on them for important components of our economy.

Authoritarian governments have the power to mobilize industry directly. Our government can’t do that. What it can do is take the lead by planning and showing the scale of its fiscal commitment. Individual businesses may or may not respond to that inducement. But we’re certainly not going to stand up to the challenge of authoritarianism simply by saying to industry, “Okay, compete.”

TAKENAKA  In authoritarian states, the government is positioned to quickly marshal investment resources for the development of technologies that it views as a national priority. So, is the idea for the Japanese government to get involved in critical technologies like semiconductors as a matter of economic security?

KIHARA  The government plans to allocate substantial funds for early-stage investment in the semiconductor industry. Crisis management is another area we’re targeting. For example, the government plans to assist the pharmaceutical industry in building the capacity to develop and manufacture vaccines and therapeutics on an emergency basis, so that we’ll be ready for the next pandemic.

TAKENAKA  Where semiconductors are concerned, the government has already shown a clear commitment, such as the 400 billion yen that it promised in order to persuade Taiwan Semiconductor Manufacturing Co. to build a plant in Kumamoto Prefecture. The media have also reported on a Japan-US partnership to develop and produce next-generation 2-nanometer chips. Is that a possibility?

KIHARA  I do think we’ll be entering into deeper cooperation with the United States. Along with production at the Kumamoto plant, we need to secure our own cutting-edge chip technology. To be honest, these are costly investments with no guarantee of success, and private companies can’t be expected to take that kind of risk on their own. A certain level of government involvement is required. 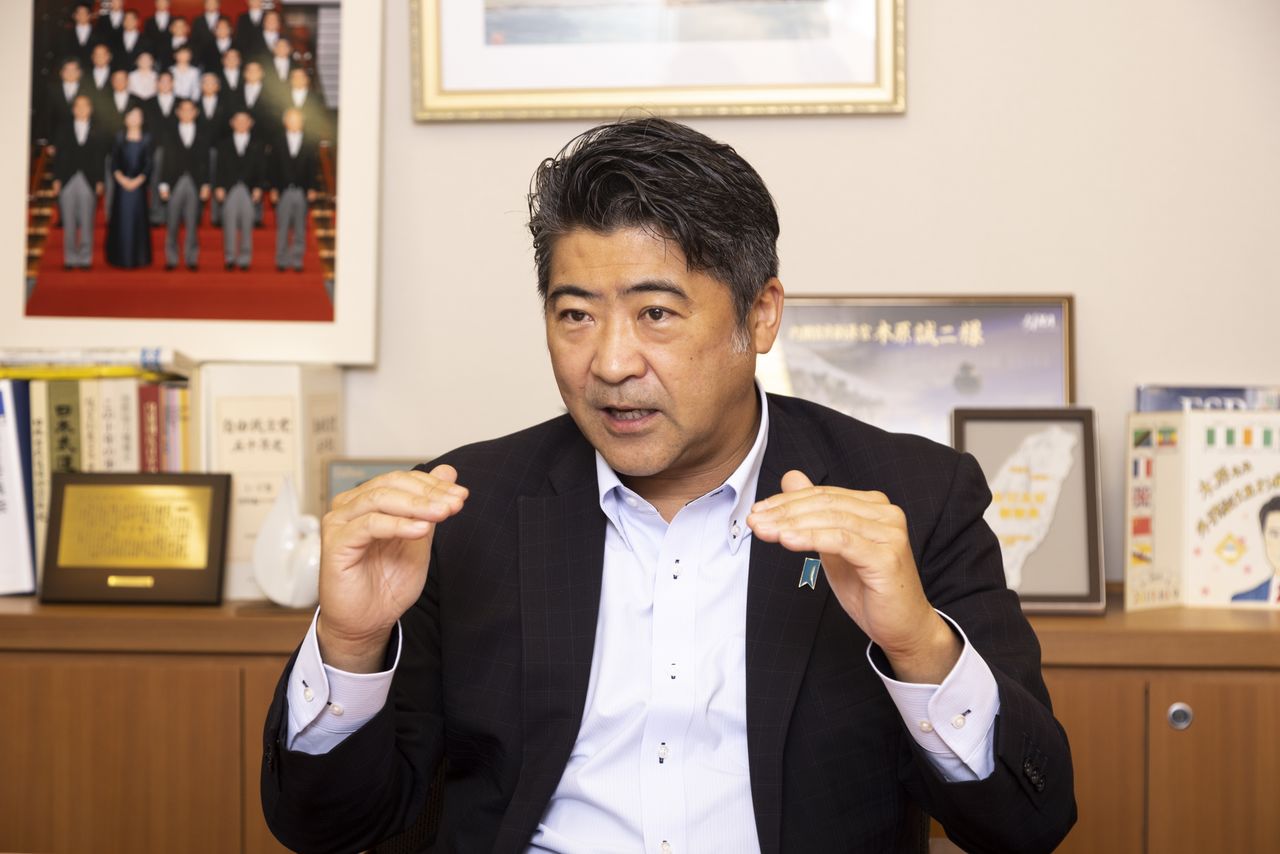 TAKENAKA  Kishida has called for a “new era of realist diplomacy” and outlined a foreign-policy stance resting on three pillars: upholding ‘universal’ values, such as freedom, democracy, and the rule of law; tackling climate change and other global issues; and diligently protecting the lives and livelihoods of the Japanese people through diplomacy and defense. How was this policy developed?

KIHARA  Prime Minister Kishida served as foreign minister for four years and eight months. The basic foreign policy his cabinet has mapped out is rooted in his own convictions and resolve. The first component of that policy is defense of universal values. The second is the centrality of the Japan-US partnership. And the third is a commitment to tackling global issues.

Of course, the emphasis on universal values goes back to the administration of Asō Tarō and continued under Abe Shinzō and Suga Yoshihide. The difference is that China’s power and influence have continued to grow, and the government must adjust its policies accordingly. We’ve entered an era in which China has begun to overtake the United States in some areas, and we have to get really serious about standing face to face with China. That’s one reason we need to change the way our economy works and allow the private and public sectors to join forces. I think the Kishida foreign policy reflects a stronger sense of urgency on that score than those of previous administrations.

TAKENAKA  Let’s move on to the Ukraine war. US President Joe Biden has characterized it as a battle between democracy and authoritarianism. How does the Japanese government view it? What’s your own thinking on the subject?

KIHARA  The Japanese government doesn’t go so far as to describe the war in that way. I personally think it’s a mistake to frame the issue in terms of democracy versus authoritarianism. The question is whether or not to uphold the rule of international law and punish those who break the rules. There are authoritarian regimes in East Asia as well. We don’t say to them, “You should become democratic states.” But they have to obey the rules.

TAKENAKA  The Japanese government responded to the crisis quite promptly this time around and has taken a pretty tough stance toward Russia. Was that Kishida’s own judgment?

KIHARA  The prime minister made a swift and decisive call on that. Prime Minister Kishida has made it quite clear, speaking on various occasions, that he places great importance on compliance with the rules. If we let one party get away with breaking them, other rule breakers will follow. That’s why a firm response is essential. The situation this time is particularly alarming, given that the rule breaker is a permanent member of the UN Security Council, which has responsibility for maintaining the international order. The outcome of this war is going to have a huge impact on the global community as a whole.

Toward a Free and Open Indo-Pacific

TAKENAKA  In May, President Biden visited Japan for a bilateral summit with Kishida, and the two also attended a “Quad” [Japan, Australia, India, and the United States] leaders’ meeting in Tokyo. What’s on the Quad’s agenda for cooperation in support of a “free and open Indo-Pacific”?

KIHARA  The Quad is not a security framework. It’s a framework for cooperation on practical civilian matters like vaccine development, infrastructure, funding for startups, and so forth. The idea is to use this kind of cooperation as the foundation for development of a rules-based regional order grounded in shared values. Security cooperation per se isn’t on the agenda, but we hope to make the Quad framework as solid as possible through cooperation in these other areas. This strong framework of cooperation should contribute to the realization of a free and open Indo-Pacific.

TAKENAKA  While in Tokyo, Biden officially announced the launch of the Indo-Pacific Economic Framework for Prosperity. What’s the main purpose of the IPEF, in your view?

KIHARA  I think it’s a highly significant framework, and a good thing, in that it shows the United States renewing its commitment to East Asia and recentering its policy around Asia. Furthermore, thirteen countries signed on at the outset, surpassing initial expectations. That’s an impressive number, and I want to give the effort my blessing. That said, Japan’s ultimate objective is for the United States to come back to the Trans-Pacific Partnership.

TAKENAKA  It looks like Britain is going to join the TPP, and China and Taiwan have both applied. Are there any plans afoot to expand membership to OECD countries like South Korea, Colombia, and Israel?

KIHARA  The important thing, I think, is that we maintain the TPP’s standards as a high-level economic partnership agreement.

TAKENAKA  This year marks the fiftieth anniversary of the normalization of diplomatic ties between Japan and China. Kishida has said that where China is concerned, he will say what needs to be said, while cooperating on matters of mutual interest. What do you think has to be said to China?

KIHARA  First off, we have to insist that China adjust its unilateral, intimidating conduct in the East China Sea and South China Sea. Both historically and under international law, the Senkaku Islands are an integral part of Japanese territory, so we will say what needs to be said on that score. In addition, we have to demand transparency from China with respect to its nuclear, missile, and general air and naval capabilities, which it has been building up in an extremely untransparent manner. All that being said, China is our neighbor, and I do believe we need to leave the door open for dialogue.