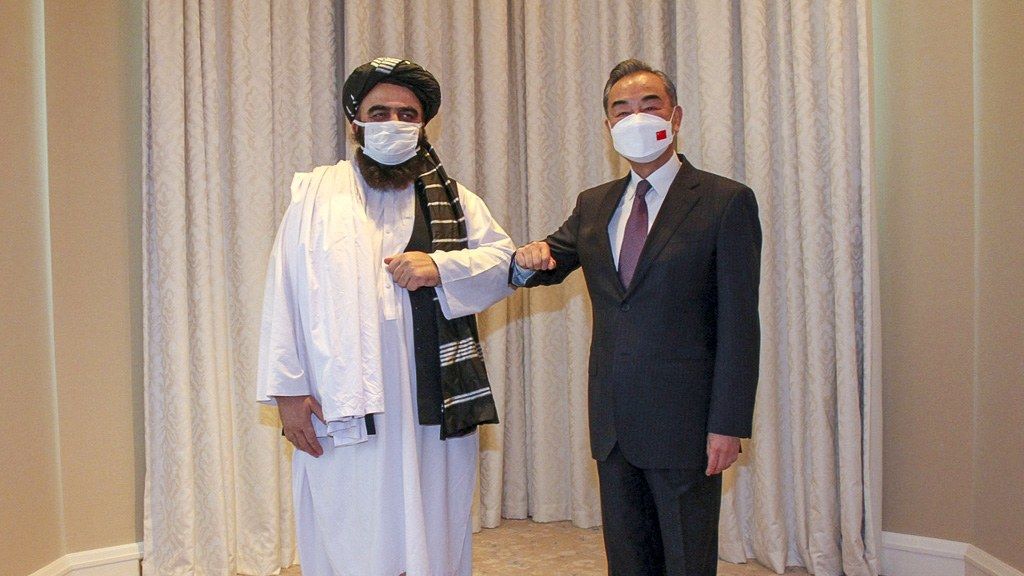 Afghanistan in Flux: China Gropes for Engagement with the Taliban

Politics Dec 6, 2021
What approach has China adopted toward Afghanistan since the withdrawal of US troops? This article analyzes Chinese-Afghan diplomacy during the years of US control and investigates China’s key issues in diplomacy in the region.

Quid Pro Quo in the War on Terror

In August 2021, when Taliban forces recaptured the Afghan capital, the fall of Kabul sent shock waves around the globe, and attention focused on the failure and irresponsibility of the US administration of President Joe Biden. China seized the opportunity to criticize the United States’s original justification for the use of force in the theater, namely, human rights issues; and on its efforts to impose US-style democracy worldwide.

Hua Chunying, of China’s Foreign Ministry Information Department, compared US-style democracy to “chilled milk”—something anathema to Chinese people—condemning US coercion of other countries to adopt its democratic systems. Beijing has repeatedly emphasized its policy of an Afghanistan “by the Afghans for the Afghans.” Its message implies that the United States completely lacked respect for Afghanistan’s sovereignty.

All this made it seem as though the Afghanistan issue had been added to the list of China-US disputes, but in fact China had been developing strong ties with the Afghan government, even while the latter was under US control. American intervention in Afghanistan, of course, dates back to the September 11, 2001, terrorist attacks on the United States. At the time, China showed support for the American-led “War on Terror” in Afghanistan, but this was in return for US designation of the Eastern Turkestan Islamic Movement as a foreign terrorist organization.

ETIM is the general name used to describe an organization that formed around Uyghur activists belonging to the self-proclaimed Turkistan Islamic Party who fled China’s Xinjiang Uygur Autonomous Region to neighboring countries in the 1990s. Those involved in the ETIM apparently do not use the term to describe themselves, but it was the designation adopted by the United States when it formally designated the group as a terrorist organization. In essence, China’s battle against separatist forces in Xinjiang became internationally recognized as one facet of the War on Terror. China praised the United States for its stance, and in return, supported its antiterror stance and provided aid for the reconstruction of Afghanistan. 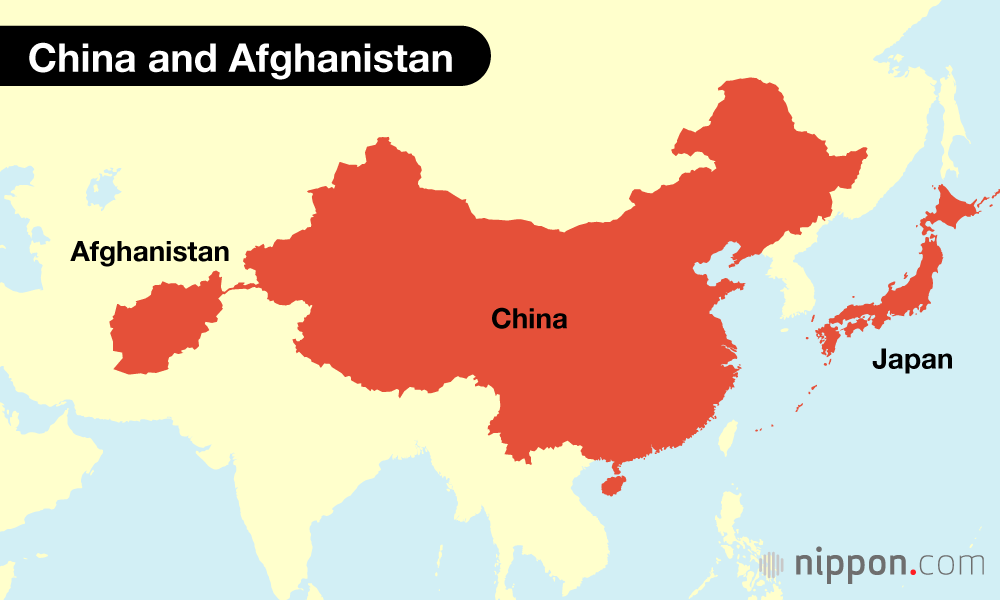 Strengthening Ties with the Belt and Road Initiative

While this reciprocal US-Chinese support was taking form, China was making its own efforts to establish relations with the Afghan Interim Administration established by the United States. According to the website of the Chinese Embassy in Afghanistan, China dispatched a small-scale task force to the country as early as December 2001. In January 2002, Hamid Karzai, the US-backed chairman of the AIA, made a visit to China. There he met with Chinese President Jiang Zemin and Premier Zhu Rongji, and Jiang pledged to provide $150 million over the next five years to support Afghanistan’s reconstruction. Construction of China’s embassy in Kabul was completed on February 6.

In the two decades that followed, during the years of US influence, China continued developing its relations with the Afghanistan government. Although there were few visits by important officials during that time, there was interaction between the leaders of the two countries, such as when President Karzai attended the August 2008 opening ceremony of the Beijing Olympics and met with Hu Jintao, then China’s head of state. In April 2010, Afghan Vice President Karim Khalili attended the Chinese-led Boao Forum for Asia, where he met with Xi Jinping, then vice president of China.

Later, with the inauguration of Xi Jinping’s administration, China-Afghanistan relations accelerated. In June 2012, President Karzai traveled to Beijing for the Shanghai Cooperation Organization summit, and the two countries made a joint declaration of the establishment of the China-Afghanistan Strategic and Cooperative Partnership. Then, in September 2013, Karzai returned to Beijing for further talks, and the two partners announced the deepening of their strategic partnership. Karzai’s successor, Ashraf Ghani, visited China in October 2014, at which time a similar declaration was made.

Thereafter, China and Afghanistan continued to develop their relationship, partly thanks to China’s proposal of its Belt and Road Initiative (formerly known as One Belt One Road). In 2014 and 2016, they exchanged memorandums on economic cooperation and other areas, including communication and trade. Ghani and Xi continued to hold top-level discussions, meeting at SCO summits each summer from 2015 to 2019.

However, China’s ongoing efforts to enhance relations with the US-led Afghanistan government were not motivated by the economic appeal of the nation, but rather by its need to ensure security within its own borders. China has been highly vigilant about what it labels the Eastern Turkestan Islamic Movement, and links stability in Afghanistan with stability in Xinjiang.

Consequently, until Taliban forces succeeded in regaining power, China had actively encouraged Kabul to be on guard against terrorist organizations. On July 28, 2021, Chinese Foreign Minister Wang Yi is widely known to have held talks with religious leader Abdul Ghani Baradar of the Taliban. But just two weeks earlier, on July 14, Wang met with Afghanistan’s Mohammad Hanif Atmar, then minister of foreign affairs, in Tajikistan’s capital Dushanbe. There he emphasized that Afghanistan must never again become a gathering point for terrorists.

But drastic changes took place in just weeks, when the Taliban successfully recaptured Kabul—far quicker than anyone anticipated. Wang subsequently held his talks with Baradar, demanding that the Taliban decisively sever relations with terrorist organizations, including the ETIM. Baradar is purported to have guaranteed that no interests would be permitted to inflict harm upon China from Afghan territory. But although Baradar may have made such a statement, the question remains as to how capable the Taliban is of fulfilling this assurance.

Cooperation with Russia in Counterterrorism

In response to the rapid developments in the Afghan situation, China has unequivocally affirmed its counterterrorism stance in alignment with Russia and Tajikistan. In early August, China and Russia held a joint military exercise, named Zapad/Interaction-2021, in northwest China’s Ningxia Hui Autonomous Region. China was represented by the Western Theater Command of the People’s Liberation Army, which includes Xinjiang in its jurisdiction. China’s Ministry of National Defense positioned the exercises as “a demonstration of its determination and capabilities to attack terrorist forces and to jointly maintain peace and stability in the region.” On August 18 and 19, immediately following the fall of Kabul, China’s Ministry of Public Security conducted an antiterror drill with Tajikistan’s Ministry of Internal Affairs just outside Dushanbe.

China has subsequently expressed its intention to play a constructive role in Afghanistan, but the details of its plans remain unclear. Despite its past criticisms of US intervention in Afghanistan, China’s latest indications of its plans for engagement with its neighbor are believed by some to suggest accelerated involvement following the US withdrawal. If this “constructive role” takes the form of economic assistance, though, it will be no different from the aid it provided while Afghanistan was under US influence. Currently, the degree to which China will become involved remains unclear.

But circumstances in Afghanistan have not yet settled enough to establish the specifics of China’s “constructive role.” Baradar, who met with Wang, is rumored to have lost his position, and the situation remains unpredictable. For now, China and Russia will maintain a close watch on the actions of the new Afghan government.

It seems likely that China will engage with Afghanistan, economically and in terms of military security and counterterrorism, under the pretext of constructive involvement, but it is unlikely to undertake military action in the way that the United States and former Soviet Union did. China is probably not foolish enough to stick its neck out in the country often dubbed the “Graveyard of Empires.” But neither will China simply step in to fill the vacuum left by the US exit.