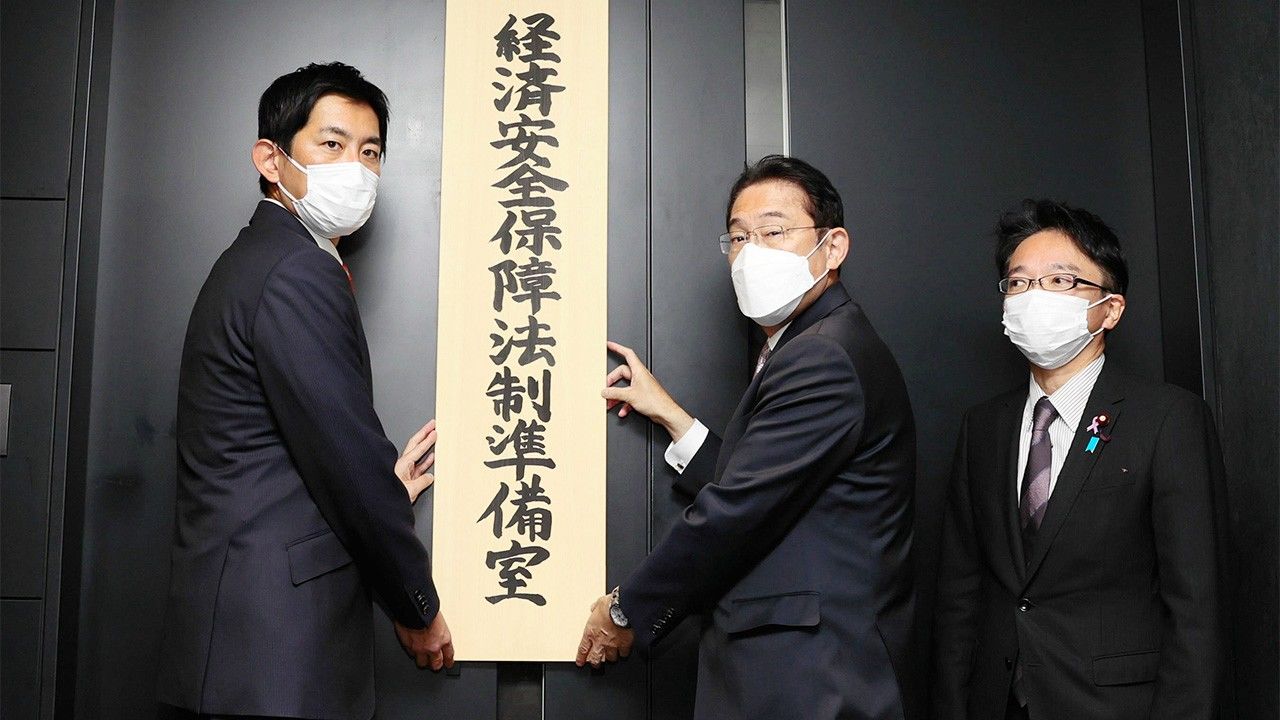 Politics Economy Feb 9, 2022
Having pledged to prioritize economic security, the Kishida cabinet has set to work hammering out policy tools to address Japan’s most glaring vulnerabilities. Suzuki Kazuto offers an overview and critique of the strategy that has begun to emerge from these labors.

Prime Minister Kishida Fumio has identified economic security as a key policy priority for his government, and the submission of legislation for that purpose appears to be high on the administration’s 2022 Diet agenda. Early into Kishida’s tenure, the details of such legislation remain unclear yet, but the general outlines are beginning to emerge. In the following, I offer an overview of the basic security challenges the cabinet hopes to address and the outlook for policy action in each area.

The Kishida cabinet’s efforts to beef up economic security are currently focused on the drafting of new legislation under the leadership of Minister for Economic Security Kobayashi Takayuki. While the precise content of that legislation remains as a work in progress, we can gather from previous reports that it will cover four major priorities: building a more resilient supply chain, supporting research and development in emerging technologies, introducing a system for classified patents, and strengthening critical infrastructure.

Topping this legislative agenda is the creation of a legal framework for nondisclosure of sensitive patents.

As a rule, patents are made available to the public. Only by disclosing patents is it possible to enforce intellectual property laws aimed at preventing non-patent-holders from using proprietary technologies without paying the appropriate licensing fee. However, some patents contain sensitive technology whose disclosure could be detrimental to national security.

This is of particular concern nowadays, with the line between civilian and military technology becoming increasingly blurred. We have already seen numerous examples of advanced civilian technology—especially in the fields of artificial intelligence and robotics—adapted for military purposes, and China’s “civil-military fusion” strategy is actively promoting military use of civilian technologies, making the distinction even harder to maintain.

Japanese companies and universities hold a substantial number of patents in emerging technologies with a potential for dual use, and many inside Japan have voiced concern about the dangers of making such information public. What has galvanized the ruling Liberal Democratic Party and the Ministry of Economy, Trade, and Industry, however, is a sense of urgency about bringing Japan up to speed with the rest of the international community. Japan and Mexico are the only members of the G20 that disclose all of their patents, and Japan could come under intense criticism from its Western partners if a strategic rival or adversary, such as China, North Korea, or Russia, were to appropriate technology disclosed in Japanese patents and use it for military purposes.

For this reason, the Kishida cabinet’s economic security team has made it a top priority to bring the nation’s patent system into step with those of other leading industrial democracies so as to maintain Japan’s reputation as a responsible member of the international community.

Also high on the agenda are measures to boost the resilience of the supply chain. This is an issue that has received much attention of late, not only in Japan but around the world. US President Joe Biden ordered a review of America’s supply chains in February 2021, and the European Parliament is deliberating measures to strengthen Europe’s supply chain resilience.

A key factor driving these efforts is China’s pivotal place in the global supply chains that have sprung up as a result of trade liberalization and market integration. The United States and China have become deeply interdependent economically, even as tensions have mounted over such flashpoints as China’s authoritarian one-party rule, human rights violations, and military expansion. In the event that such tensions escalated into a serious clash, the United States and Japan would both be vulnerable to Chinese economic coercion in the form of sanctions and embargoes. Beijing has already demonstrated its willingness to use trade as a weapon against countries that provoke its ire, as seen in its ban on Taiwanese pineapple imports and its imposition of a wide range of punitive sanctions against Australia (including a ban on coal imports) after Prime Minister Scott Morrison called for a full-scale international investigation into the origins of the COVID-19 pandemic.

With such security considerations in mind, policy makers have been looking at ways to reduce Japan’s dependence on China, as by diversifying our supply sources for key materials and products and augmenting our stockpiles of strategic supplies. It remains to be seen how the cabinet’s economic security legislation will tackle these challenges, but the first step will doubtless be a thorough review of the nation’s supply chains to assess our degree of dependence on Chinese suppliers.

The government has already taken some concrete steps to address supply chain issues with respect to semiconductors. Essential to a wide range of electronic products and systems, semiconductors are highly strategic products, yet Japanese manufacturers today are almost entirely dependent on overseas makers for advanced logic chips. Moreover, in the past two years a combination of supply bottlenecks and surging pandemic demand has created a global chip shortage that has impacted Japanese manufacturers and consumers alike. Hoping to boost domestic chip production quickly, the Japanese government has persuaded Taiwan Semiconductor Manufacturing Co. to build its first chip plant in Japan by offering subsidies covering half the construction costs. When it comes to economically strategic goods like semiconductors, maintaining a stable supply—even at the cost of hefty subsidies—is a political as well as security priority.

The need to promote digital transformation in the public sector was thrown into high relief during the pandemic, when widespread reliance on paper forms impeded the compilation and reporting of health data (with facsimile machines playing a prominent role) and slowed the processing of emergency benefits. Owing to the lack of a unified vaccination record system, efforts to track COVID-19 vaccination status at various levels also entailed a massive mobilization of administrative labor. Chastened by these failings, the cabinet of Prime Minister Suga Yoshihide launched a program to develop Digital Agency at the national level in the expectation that the ripple effects would hasten a similar shift in the way local governments and private companies do business.

This initiative has highlighted the need to enhance the nation’s digital infrastructure. The government has already allocated funds for the installation of fiber optic networks at the municipal level, but this is only one aspect of the challenge. In Japan, data centers are heavily concentrated in the major metropolitan areas, where demand for cloud services is high. This centralization raises the risk of massive damage from data center outages. To better manage these risks, it is necessary to bolster Japan’s digital infrastructure with an eye to a wider, more even distribution of data centers. We also need robust systems to protect this and other critical infrastructure from cyber threats. The use of Chinese products and components in our digital networks will need to be carefully reviewed. Much remains to be done on these challenges, but the issues are under deliberation and are likely to feature in the government’s emerging economic security strategy.

International competition to set the standard in key emerging technologies is intense, and the outcome of that competition could have a profound impact on our strategic autonomy and security. The need to step up public investment in R&D is manifest, but this is a problem of long standing, and progress is likely to be slow.

On the other hand, the Japanese government can and must take decisive steps to prevent the transfer of sensitive emerging technologies to other countries and their diversion for military purposes. To that end, the government will eventually need to build a list of sensitive technologies with potential military applications and subject them to tough restrictions.

In addition to imposing export controls on devices and parts incorporating such technology, the government needs to restrict participation by Chinese students in sensitive research projects. The Kishida cabinet seems to understand that protecting Japanese technology from appropriation for military purposes will ultimately contribute to the nation’s security.

The Kishida cabinet’s economic security team is currently placing top priority on drafting legal frameworks and other policy tools pertaining to the four areas of economic security described above. But there is no real sign of a grand strategy or vision driving these efforts.

What we see instead is a timid approach that eschews economic statecraft for an inward-looking defensive game plan. The current government’s policy initiatives in the areas of secret patents, supply chain resilience, critical infrastructure, and R&D funding are all geared to fixing vulnerabilities or at most maintaining an edge in technologies where Japan currently excels.

The next question is whether Japan, as the world’s third-largest economy, can make the leap from a passive, defensive economic security posture to a confident, assertive strategy geared to parlaying our economic and technological strengths into geo-economic power and leveraging that power to help shape the international order.