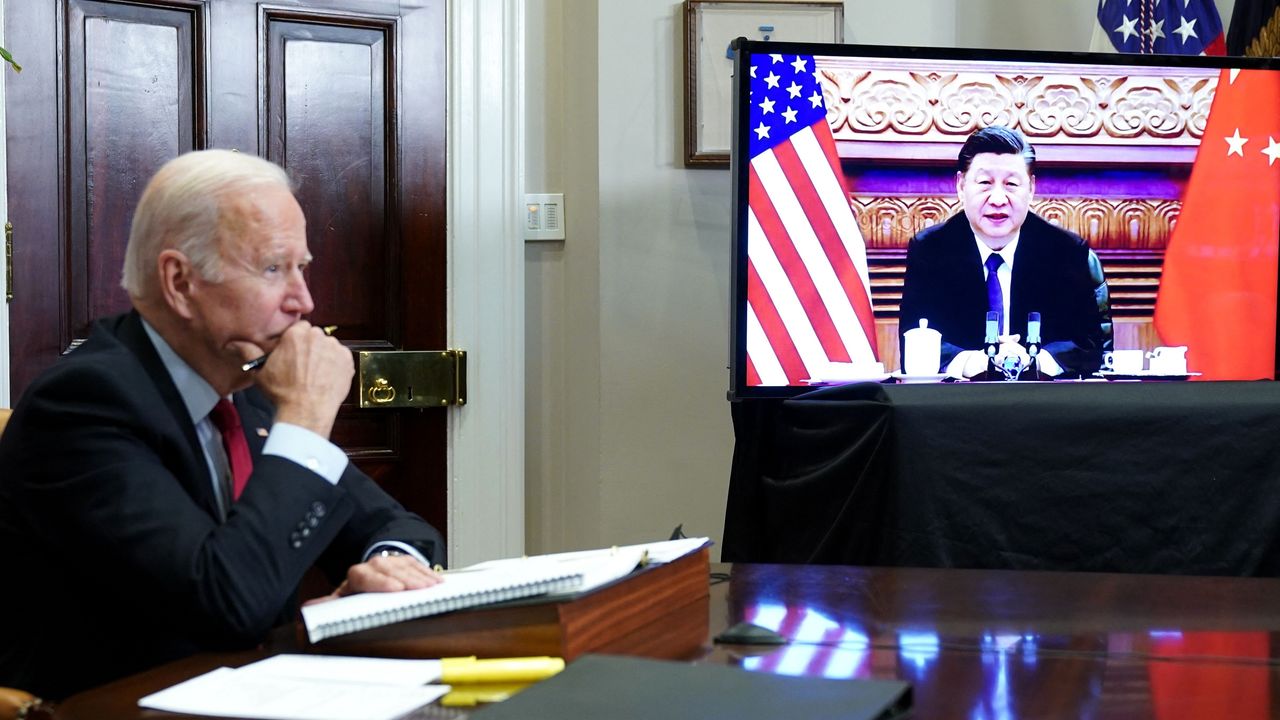 Economy Politics World Mar 7, 2022
China’s new approach to economic security bears three features deserving greater attention: its use of industrial policy to address supply chain vulnerabilities exposed by recent US sanctions, a rapid legal and regulatory evolution of its economic security framework, and a significant risk that its new autonomy-focused approach will give Beijing another diplomatic tool for economic coercion.

One of the most important developments in the “high-tech cold war” between the United States and China took place in May 2019. The United States Department of Commerce’s Bureau of Industry and Security added Huawei and several other Chinese tech companies to its “Entity List.” Authorized by the Export Administration Act, this list restricts certain entities from sourcing American technology.

Through this simple act, the United States dealt a major blow to Huawei, the world’s leading smartphone maker. To meet China’s massive domestic demand for electronics, Chinese companies have been importing large quantities of semiconductors. By targeting China’s supply chain vulnerabilities in this way, the American semiconductor embargo effectively cut off China’s high-tech companies from the source of their livelihood.

China responded by placing supply chain security and innovation in science and technology at the center of its fourteenth Five-Year Plan (2021–25). President Xi Jinping’s April 2020 speech at the seventh meeting of the Central Financial and Economic Affairs Commission foreshadowed this autonomy focus by emphasizing the importance of “building production chains and supply chains that are independently controllable, secure, and reliable” and the need to “strive for important products and supply channels to all have at least one alternative source.”

The Chinese government had previously identified the importance of being able to produce semiconductors domestically in 2015 when it released its Made in China 2025 industrial strategy. In August 2020, as the government continued working on the fourteenth Five-Year Plan, the State Council released its notice on “Several Policies for Promoting the High-Quality Development of the Integrated Circuit Industry and the Software Industry in the New Era.” Building on China’s thirteenth Five-Year Plan for S&T Innovation, this notice identified plans to use various industrial policy tools to achieve semiconductor autonomy, including tax incentives, local government investment funds, and increased R&D support.

While the atmosphere in China surrounding its pivot to domestic semiconductor production can be described as “quasi-warlike,” many obstacles to success remain. Several semiconductor fabrication facilities are being built in various regions in China with loans from local government investment funds, but there are concerns that resources will be wasted due to duplication and excessive investment in low-quality facilities. Furthermore, in December 2021 state-owned semiconductor manufacturer Tsinghua Unigroup ceased operations and applied for reorganization bankruptcy. Tsinghua Unigroup had up until then pursued a bold mergers and acquisitions strategy backed by debt and significant government subsidies so that it would emerge as a major semiconductor industry player.

Due to the current Western monopoly on advanced lithography technology and chip design software, it will likely take at least another five years for China to begin domestic fabrication of high-end single-digit nanometer chips. However, in the middle- to low-end 10–100 nanometer range, Chinese companies have already made significant advances while China has established the industrial capacity to manufacture supporting materials and instruments. It is possible that a domestic Chinese semiconductor industry supported by a well-developed value chain and a reliable and vast domestic user base will begin competing on a global footing within 5–10 years. The West may come to regret recent actions that seem to have provoked a furious Chinese determination to accelerate the building of an autonomous semiconductor industry.

China initially retaliated to Huawei’s addition to the Entity List by establishing its own Unreliable Entity List. However, the Chinese government, seemingly now aware that it is in a high-tech cold war, has recently begun to enact laws and regulations in rapid succession in pursuit of “economic security.”

Three features stand out regarding this rapid legislative evolution. First, while initially a passive response to the United States’ economic measures, China’s approach has rapidly evolved into the more active pursuit of economic security by emulating the United States’ legislative framework. In particular, the Export Control Law, which came into effect in December 2020, makes the export and re-export of all “controlled items” subject to licensing requirements. These controls not only apply to Chinese companies or individuals providing controlled goods, technology, or services to foreign companies, but also to “re-export” transactions between third party countries for products and services that contain Chinese-made parts or technologies developed in China. This extraterritorial application of export controls is in line with American regulations but will nevertheless have a massive impact on foreign companies operating in China.

Secondly, the regulatory scope of new legislation is broad and vague. For example, one proposal defining “important and core data” sought to subject to export control “data on scientific and technological achievements in such areas as encryption, biology, electronic information, and artificial intelligence that have a direct impact on national security and economic competitive strength.”

The United States’ new export controls on “emerging” and “critical” technologies directed at China are also defined in vague and broad terms, which has made initial implementation difficult. In China, however, there is a high possibility that the above regulations will be administered without the scope being first clarified. There is therefore concern that the authorities will have the discretion to arbitrarily single out certain transactions by certain companies for violating the law. This lack of transparency and predictability both ways could depress commercial activity in China.

Third, the scope of China’s new regulations goes beyond enhancing economic security to include broader “national security and interests”. The Provisions on the Unreliable Entity List, for example, compel the state to adopt measures against foreign entities “endangering national sovereignty, security or development interests of China” (Article 2-1). This is addition to penalties for “suspending normal transactions” or “applying discriminatory measures against an enterprise, other organization, or individual of China, which violates normal market transaction principles.”

Just how broad the scope of China’s “national security and interests” can be is revealed by Xi Jinping’s 2014 Overall National Security Outlook. The Outlook conceives of national interests in political and economic terms, but also incorporates Chinese culture, society, and overseas interests into this “comprehensive” definition of national security.

The Anti–Foreign Sanctions Law also states that the government has the right to employ corresponding countermeasures against any attempts to “contain or suppress” China under “any kind of pretext” or interfere with China’s internal affairs (Article 3). Furthermore, countermeasures can be employed against any foreign states, organizations, or individuals that “carry out, assist, or support conduct that endangers our nation’s sovereignty, security, or development interests” (Article 15). There is no precedent for justifying the pursuit of national interests by defining “security” in the comprehensive manner outlined above. It is difficult to avoid the sense that something else may lay behind the evolved “economic security” approach than first meets the eye.

From Economic Security to Economic Coercion?

The third feature of China’s transformed economic security approach is the increased risk that the country will adopt economic coercion in its diplomacy by leveraging the raft of new laws and regulations outlined above. After all, China has reserved for itself the right to impose sanctions on foreign countries that interfere in its “internal affairs” or “infringe on China’s core interests,” and believes itself justified in forcing other countries to “correct” unreasonable attitudes.

For example, Beijing responded to the Australian government’s pursuit of an independent investigation into China’s responsibility for the COVID-19 pandemic by imposing antidumping duties on Australian barley in May 2000 and wine in August of that year. Beijing also undertook retaliatory measures by instructing steel mills and power plants not to import Australian coal.

Then, in July 2021, the Chinese government took measures against Lithuania after its government approved the establishment of a representative office operating under the official name of “Taiwan.” Not only did China disallow imports of Lithuanian products, but Beijing also attempted to pressure international companies not to use Lithuanian-made parts.

Both cases are characteristic of a pattern of behavior where China tries to achieve its diplomatic objectives by bringing smaller countries to their knees through economic coercion. In the former case, it was to avoid being held accountable for failing to control or alert the international community about COVID-19. In the latter case, it was to punish Lithuania for violating Beijing’s One China principle pertaining to recognition of Taiwan. If the international community does not support nations targeted by such coercion, smaller countries will be picked off one by one, and others will be intimidated into submitting to China when it asserts its national interests.

Ultimately, it seems as if China’s economic coercion has gained a new wind under the guise of “economic security” and its new armory of laws and regulations. The international community needs to stand together in response and make it clear collectively that it will not yield to coercive economic diplomacy.