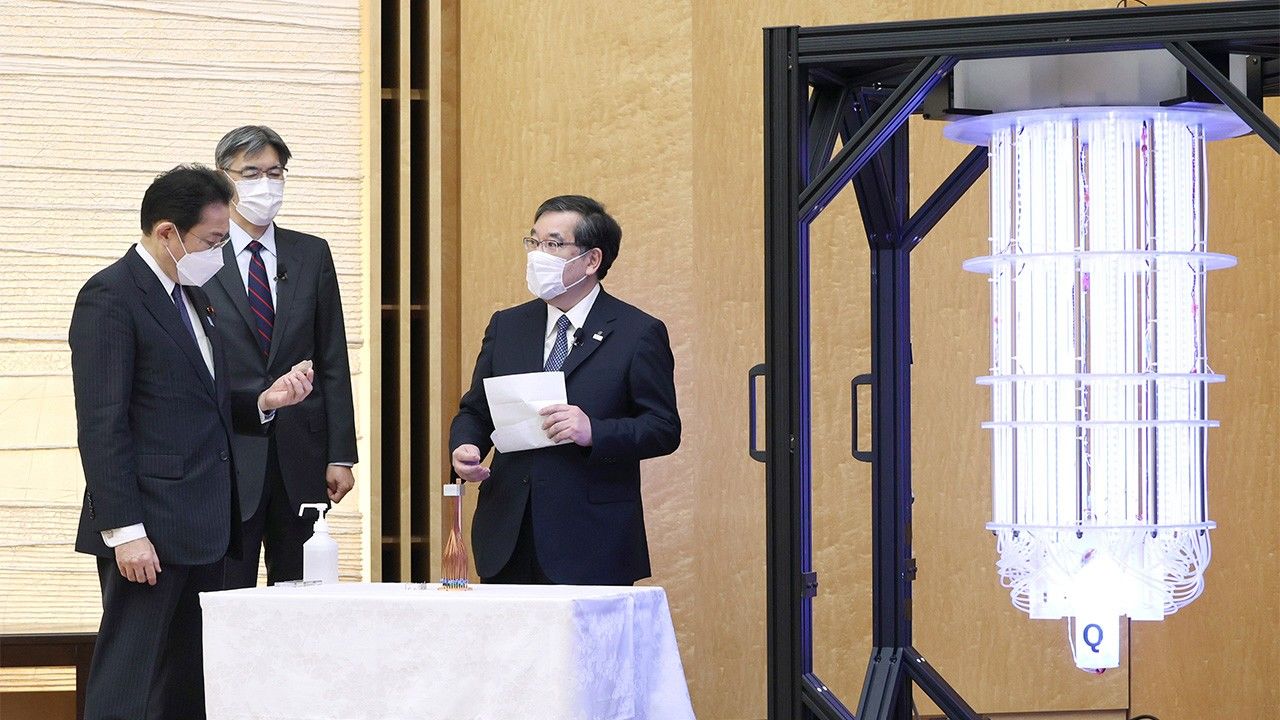 Economic Security and the New Capitalism: Synergy or Tradeoff?

Politics Economy Aug 12, 2022
Prime Minister Kishida Fumio has raised some eyebrows by positioning economic security as a pillar of his administration’s growth strategy. Policy expert Suzuki Kazuto probes the relationship between economic security and the New Form of Capitalism.

A beefed-up economic security policy, embodied in the cabinet-sponsored legislation that passed the Diet on May 11, is one of Prime Minister Kishida Fumio’s signature initiatives. In fact, the government has positioned economic security as a pillar of its economic growth strategy. But is economic security really compatible with the aims of Kishida’s New Form of Capitalism? In the following, I examine the two concepts more closely with that question in mind.

What’s New About the New Form of Capitalism?

The Kishida government’s flagship economic policy, dubbed the New Form of Capitalism, has attracted a good deal of debate in recent months, with skeptics asking what exactly it is and how it qualifies as new.

The prevailing interpretation (based largely on earlier statements by Kishida) is that the term New Form of Capitalism represents a shift toward the redistribution of wealth after years of trickle-down neoliberal economics under Prime Ministers Abe Shinzō and Suga Yoshihide, who focused on boosting business profits via deregulation, loose monetary policy, and fiscal stimulus. To many, however, the New Form of Capitalism seems like a throwback to the economic policies of the 1960s and 1970s, when the government intervened aggressively via a growth-oriented industrial policy and programs aimed at distributing the fruits of that growth.

The Kishida administration’s growth strategy differs most obviously from the postwar approach in respect to the industries it targets. Where the postwar industrial policy emphasized investment in mass-production of consumer goods, the New Form of Capitalism identifies four very different growth engines: promotion of technological innovation to power high-value-added industries; revitalization of local economies through the Digital Garden City Initiative; investment in the green economy with the goal of achieving carbon neutrality; and finally, “economic security.” The focus on high-value-added, high-tech industries and the green economy as engines of growth makes sense in today’s slow-growth environment, which followed a similar path to that taken by the European Union. But the relationship between economic security and growth is not intuitively obvious.

In the context of the New Form of Capitalism, the government characterizes economic security policy as a force for restructuring the Japanese economy and redefining the relationship between the public and private sectors. As explained on the website of the prime minister’s office, the aim is to “enhance the independence of Japan’s economic structure and secure the superiority and thus the indispensability of its technology so as to safeguard the people’s security and peace of mind.” In the process, we are told, the policy will “encourage private-sector investment in these areas and stimulate economic growth.” The big question is whether the last assertion is realistic.

The central aim of today’s economic security policy is to build a nation’s capacity to resist coercive economic measures, especially from hostile countries bent on boosting asserting their own political or ideological will. The rapid globalization of economic activity has strengthened ties of interdependence via international trade and investment. Yet those same ties can make us vulnerable to economic coercion. The biggest concern is that a strategic rival or adversary will apply political pressure by threatening to cut off supplies of essential goods or services. Accordingly, a strong economic security policy is one that functions to avert such coercion, as by stockpiling essential goods, diversifying the supply chain, and developing substitute goods.

The problem is that our dependence on other countries’ goods or services is the result of rational economic decision making. We prefer to source certain items from certain countries—including adversarial ones—because they offer us good quality at low cost. When we act purely out of rational economic self-interest in this manner, we end up trading with whoever offers the best deal, regardless of security concerns. On the other hand, the logic of national security tells us to avoid the risk of being economically dependent on an adversarial country and to find some other stable supply of the goods we need, even if that decision goes against our economic interests. In this way, the logic of economics can come into conflict with the logic of national security. And economic security generally comes down on the side of the latter. Simply put, economic security values the benefits of national security over those of economic growth.

This presents a dilemma for the Kishida cabinet. For Japan to achieve economic growth, it must strengthen its competitive advantage through economically rational policies, such as measures to reduce costs and boost competitiveness in areas where Japan can maintain an edge, while allowing uncompetitive industries to move offshore. But such policies may run counter to the imperatives of economic security. The idea of encouraging private investment in domestic industries tied to economic security also poses issues unless investments are carefully screened to prevent sensitive sectors from coming under the influence of hostile foreign powers.

In fact, the 2019 revision of Japan’s Foreign Exchange and Foreign Trade Act laid the basis for more rigorous screening of foreign direct investment by requiring prior notification of any purchases of stocks that would give the buyer 1% ownership or more of a listed company, down from 10%. But is this heightened scrutiny of foreign investment conducive to economic growth?

This dilemma is by no means unique to Japan. Today almost every country in the world is integrated into the global economy to one degree or another, and most have economic ties to countries that they regard as actual or potential adversaries.

A particularly relevant example today is the European countries’ dependence on Russian energy. While the members of the European Union agree on the need to apply economic sanctions to punish for its invasion of Ukraine, their dependence on Russian natural gas makes it difficult for them to cut off Russia’s most important source of foreign currency. Moreover, in an effort to get the sanctions lifted, Russia is using its position as a key energy supplier to engage in economic coercion toward the Group of Seven countries—including Japan—as by threatening to halt the flow of natural gas and placing the Sakhalin 2 gas and oil project (in which two Japanese corporations have a major stake) under the control of a Russian state-owned enterprise.

Under these new circumstances, the countries of Europe are also grappling with issues of economic security. Hoping to reduce the energy dependence that makes them susceptible to economic pressure from Moscow, they are building new facilities to receive shipments of liquefied natural gas from other countries and accelerating the shift to alternative energy sources. But a sound economic security policy involves preparing for such contingencies, not reacting to them after they happen. The EU should have undertaken these measures before the conflict came to a head and Russia began tightening the screws.

Another hot topic in the area of economic security is America’s evolving China policy amid growing tensions between these two rival powers. After President Donald Trump took office in 2017, Washington began to distance itself from free-trade initiatives and calling for a measure of “decoupling” from China, its main strategic rival. After withdrawing from the Trans-Pacific Partnership, the Trump administration adopted a policy of slapping unilateral tariffs on Chinese goods.

On the whole, the administration of President Joe Biden has continued Trump’s economic security policies, taking a more circumspect approach to free trade in view of the risks of interdependence. After his inauguration, Biden issued an executive order for a review of US supply chains, and plans were drawn up to beef up supply security for such strategically critical goods as semiconductors and batteries.

What distinguishes Washington’s new economic security policy from Tokyo’s is the former’s distinctly protectionist bent, as seen in calls for the “reshoring” of key industries with the aim of reducing dependence on all foreign suppliers, not just strategic adversaries. Where reshoring is unfeasible, “friend-shoring”—shifting to friendly nations as sources of essential goods—is the next-best option. The Biden administration has tightened the requirements of the Buy American Act (applicable to direct purchases by the US federal government valued at more than $10,000) in its efforts to boost domestic industry and reduce dependence on imports. Foreign capital is also under close scrutiny as the Committee on Foreign Investment in the United States reviews the national security implications of investments by foreign entities (Japanese investors included) in American companies or operations.

As these examples suggest, countries the world over are confronting the same basic challenge of steering a course between economic rationality and national security. At this point, all are still struggling—albeit each in its own way—to strike a sustainable balance.

Toward a New Era of Economic Security

It is natural to question the compatibility of Kishida’s economic security policy with the growth strategy of the New Form of Capitalism. However, in view of the risks posed by economic dependence on hostile or adversarial countries, we might think of economic security as a risk management plan that needs to be in place before we can safely pursue economic growth. Looking at the economic security policies evolving in other countries, we can sense a rising awareness that the risks of economic dependence are growing rapidly and that those risks must be controlled if we are to enjoy economic growth and its fruits in the years to come.

This analysis leads us back to the question posed earlier: What exactly is new about the New Form of Capitalism? The novel component may be a recognition that the liberal economic order Japan has embraced since the end of World War II has reached a crossroads, that the risks attending a single-minded focus on economic growth have become unacceptable, and that it is necessary to build an economic policy on a firm foundation of economic security. The pursuit of growth predicated on a balance between the imperatives of economic self-interest and those of national security may well be the new shape of capitalism in the twenty-first century.

(Originally published in Japanese. Banner photo: Prime Minister Kishida Fumio, far left, attends a presentation on quantum computing at a meeting of the Council for Science, Technology, and Innovation at the Prime Minister’s Residence, June 2, 2022. © Jiji.)