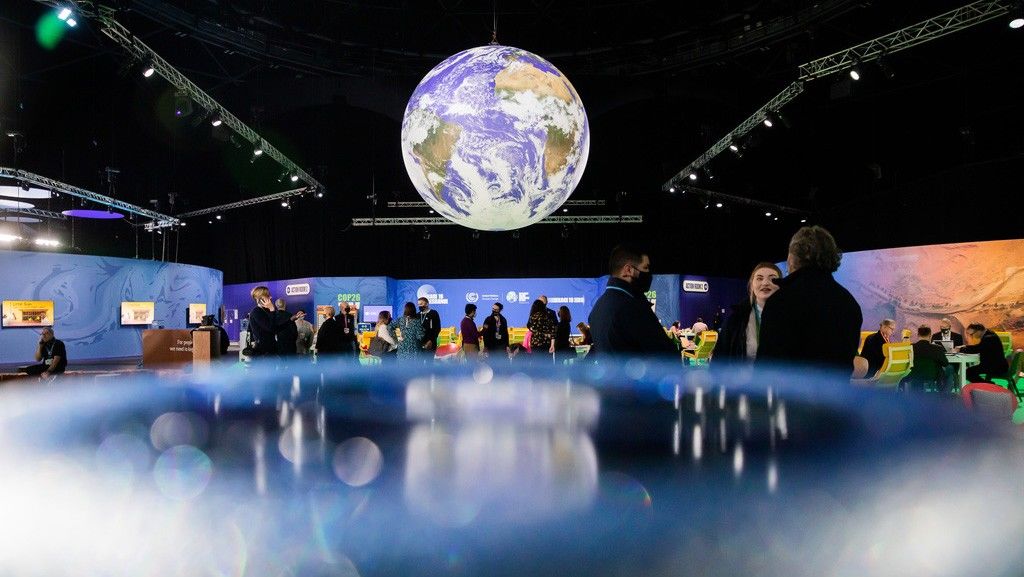 The 2021 UN Climate Change Conference was held in Glasgow, Britain, from October 31 to November 13. The main outcome of the long-delayed meeting, known as COP 26, was an affirmation of the need to strengthen climate action with the goal of keeping the average global temperature within 1.5 degrees Celsius of preindustrial levels during the twenty-first century. Where do we go from here? In the following, I offer an overview of climate diplomacy leading up to COP 26 and consider Japan’s responsibilities in the context of those trends.

Commitments Under the Paris Agreement

The Paris Agreement was concluded in December 2015, replacing the 1997 Kyoto Protocol as the primary international agreement on climate change. Both instruments called for national commitments to reduce emissions of carbon dioxide and other greenhouse gases, but the Paris Agreement extended that obligation to all parties, instead of limiting it to the developed countries and the former Soviet bloc nations. Under the Paris Agreement, the parties also agreed on the goal of limiting global warming to 2°C, and preferably 1.5°C. With the conclusion of this accord, the United States—which had ultimately rejected the Kyoto Protocol on the grounds that it exempted such key emitters as China and India—rejoined the global climate regime.

Under the Paris Agreement, all parties are required to draw up and submit their own climate action plans every five years. Although these “nationally determined contributions” (NDCs) are expected to become progressively more ambitious, each country is free to set its own targets using the baselines of its choice. How did the world’s major carbon emitters respond to this challenge?

The most ambitious plan was submitted by the European Union, which pledged a 40% reduction in emissions from 1990 levels by 2030. The United States, which was the world’s second-largest emitter in 2015, pledged a 26%–28% reduction from 2005 levels by 2030. Japan also set a 26% reduction target, but from the baseline year of 2013 (when emissions spiked). By contrast, the NDC submitted by China, now the world’s top carbon emitter, would allow economy-wide emissions to continue rising until 2030, even though emissions per unit of gross domestic product should fall by 60%–65% from 2005 leels. Similarly, fast-growing India, now the world’s third-largest carbon polluter, permitted itself considerable leeway with a plan to reduce emissions per unit of GDP only by 33%–35%.

The push for stronger climate action gathered steam with the October 2018 release of a Special Report on 1.5°C by the Intergovernmental Panel on Climate Change (the UN body responsible for scientific assessments and projections pertaining to climate change). The report concluded that it was necessary to keep the global rise in temperatures to within 1.5°C (as opposed to 2°C) to avoid the worst impacts of climate change, and that that would require a 45% cut in CO2 emissions by 2030 and net zero emissions by 2050. In September 2019, at the UN Climate Action Summit, 77 countries committed in principle to net zero carbon emissions by 2050, and most of those promised to revise their NDCs accordingly.

A raft of new commitments followed. In December 2019, the European Commission presented the European Green Deal, aimed at halving carbon emissions by 2030 and achieving climate neutrality by 2050. The EU’s 2030 reduction target was subsequently raised to 55%, and in June 2021 the policy became legally binding with the enactment of the European Climate Law. At the September 2020 meeting of the UN General Assembly, President Xi Jinping of China announced a new national goal of carbon neutrality by 2060. The following October, in his first policy speech to the Diet, newly appointed Japanese Prime Minister Suga Yoshihide signaled a major shift in national policy by embracing a target of carbon neutrality by 2050. Japan then boosted its 2030 reduction target to 46%.

The response of the developing countries was lukewarm by comparison. India avoided any mention of carbon neutrality, and China disappointed the world by failing to commit to stronger actions in the run-up to COP 26.

Out of Step on Coal Power

A major bone of contention in the negotiations surrounding COP 26 and the Glasgow Climate Pact was the proposed phase-out of coal-fired power plants. In the developed world, the trend had been underway since around 2016, when Western governments began announcing plans to eliminate the use of traditional coal-fired electricity: France by 2022, Britain by 2024, Italy by 2025, and Canada by 2030. Even Germany, which is relatively dependent on coal, promised to complete the transition by 2038. The United States, while stopping short of a promise to scrap coal power, has pledged to reach 100% carbon-pollution-free electricity by 2035.

As COP 26 host and president, Britain took its cue from these trends and made the accelerated phase-out of coal power a major goal of the conference. It drew up the Global Coal to Clean Power Transition Statement, calling for the richer economies to complete the transition from unabated coal power before the2040s and for poorer countries to follow suit before the 2050s. Although 46 governments, including the EU, signed on, neither China, India, Japan, nor the United States were among them. Language supporting the phase-out of coal power was initially included in the COP 26 outcomes document, but was later replaced with the term “phase down” after a last-minute objection from India and other coal-dependent developing nations. Conference President Alok Sharma regretfully accepted the change as the price for achieving his top priority, an agreement on the 1.5°C target.

Those pushing for an eventual phase-out of coal power got no support from the Japanese government. To the contrary, Prime Minister Kishida Fumio’s statement supporting the use of coal-derived hydrogen and ammonia for low-carbon power generation was greeted as regressive, and Japan came under sharp criticism from climate groups, as it did at the previous conference. Granted, special circumstances—most notably, the impact of the 2011 Fukushima meltdown on nuclear power generation—make it difficult for Japan to secure a stable and reliable power supply without the aid of coal. But by failing to take a more proactive position on decarbonization of the power sector, Tokyo set itself in opposition to progressive currents and appeared to accept the status quo among the coal-dependent developing countries.

Climate Diplomacy and the National Interest

In recent years, the champions of sustainable development have tended to focus on the economic benefits of decarbonization as a new growth strategy. The idea is that the push for carbon neutrality will fuel technological innovation in such areas as renewable energy, carbon capture, hydrogen fuel cells, and storage batteries, which in turn will give rise to new markets. Experts agree that the transition to a low-carbon economy will generate a vast array of new business opportunities, and the world’s leading economic powers have begun targeting public investment in a bid to position themselves as leaders in the new economy.

The EU has emerged as a leader in this trend. In January 2020, the European Commission unveiled the European Green Deal Investment Plan, which aims to mobilize 1 trillion euros over the next 10 years for such projects as electrification of transport, biomass power generation, and development of carbon removal technologies. The American Jobs Plan unveiled by President Biden in March 2021 calls for $2 trillion in spending over eight years, with a substantial portion allocated to investment in electric vehicles and high-voltage transmission lines to help deliver renewable energy to consumers.

Nor are such policies limited to the industrial West. More than a decade ago, China began targeting new energy technologies, green technologies and equipment, and new energy vehicles as “strategic emerging industries.” It has also worked to develop overseas markets for such goods and technologies through its Belt and Road Initiative. As a result, Chinese companies now control 70% of the global market for solar panels, and 5 of the top 10 makers of wind turbines are Chinese. Japan has jumped on the bandwagon recently with a ¥2 trillion Green Innovation Fund (announced in December 2020) to support development of technologies for achieving carbon neutrality by 2050, including hydrogen and low-cost offshore wind power.

Economic competition of this sort can certainly play a role in promoting the development and adoption of low-carbon technologies. But the profit motive cannot alter the trajectory of the world’s developing countries in time to avert a full-blown climate crisis. This is why we need to keep sight of the basic reason for pursuing decarbonization: the need to stabilize the earth’s climate as an essential global public good.

While the developed countries draft ambitious plans to phase out coal and other fossil fuels, the world’s poorer countries are still struggling to meet their basic energy needs. India currently relies on inexpensive coal for more than 70% of its electric power. This is why, at COP 26, it resisted Britain’s push for a commitment to phase out coal entirely. India did pledge to increase the share of renewables in its energy mix by 50% by 2030, but that share currently stands at less than 5%. The economic, political, and technical obstacles to a speedy transition are huge. Moreover, as economic activity rebounds in India and the rest of the developing world in the months ahead, construction of roads, railways, and factories will pick up, further boosting demand for coal to provide low-cost electric power.

The only way to bridge this great divide is for the richer countries to subsidize the energy transition in the developing world. Without such assistance, the developing countries will remain dependent on coal for the foreseeable future and continue to pump greenhouse gases into the atmosphere. This is why, in 2009, the developed nations pledged to jointly provide $100 billion annually in aid to help poorer countries reduce emissions and adapt to climate change. Unfortunately, the industrial world has failed to keep that collective commitment. (Herein lies the importance of Prime Minister Kishida Fumio’s Glasgow pledge to contribute an additional ¥1 trillion to developing countries.)

The threat of climate change is not limited to small island nations in danger of sinking into the ocean. Extreme weather events like Hurricane Ida, which devastated the East Coast of the United States in the summer of 2021, are increasingly common. This is why we say that climate stability is a global public good. From this standpoint, it is manifestly in Japan’s national interest to work harder to reduce its own dependence on coal power generation and assist the region’s developing countries in making the same transition.

(Originally published in Japanese. Banner photo: A giant model of the earth looms over COP 26 participants in Glasgow, Scotland, on November 13, 2021. © DPA/Kyōdō.)