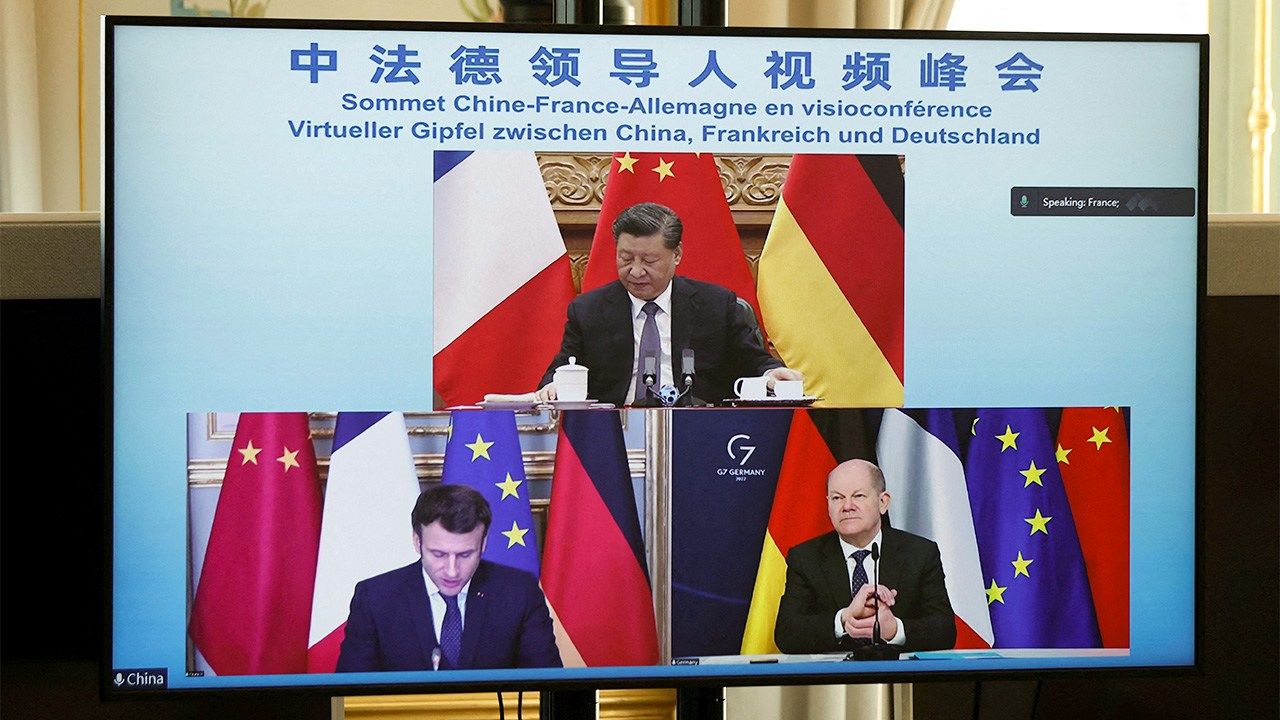 China and the War in Ukraine: Anatomy of a Tightrope Act

Politics Apr 26, 2022
China watcher Kawashima Shin analyzes Beijing’s slippery stance on the Russian invasion of Ukraine, speculates on the path it will choose in the weeks ahead, and considers the conflict’s implications for Taiwan.

China’s stance on the war in Ukraine has been the subject of much comment and speculation. Beijing has steadfastly refused to condemn Russia’s military aggression, citing the expansion of NATO (North Atlantic Treaty Organization) as a major cause of the conflict. At the same time, it has repeatedly called for peace and even offered to help mediate a settlement between Ukraine and Russia. As Russia’s new strategic partner, will China use its influence to broker a peace? Or will it defy the West and lend its support to Moscow’s war on Ukraine?

In the following, I offer my own assessment, based on four key considerations. One is Russia’s strategic importance to China in the context of the latter’s ongoing rivalry with the United States and its democratic allies. The second is Beijing’s reluctance to damage profitable trade ties with the West by siding openly with Russia. The third is China’s long-term strategic emphasis on cultivating close ties with the world’s developing nations, for whom the principle of national sovereignty is sacrosanct. And the fourth factor, looming over the rest, is the National Congress of the Communist Party of China, scheduled for the fall of 2022.

Risk Avoidance Ahead of the National Congress

The Twentieth National Congress of the Communist Party of China, scheduled for the autumn of 2022, will be an important test of Xi Jinping’s autocratic power. At this major political event, Xi is hoping to secure a third term as general secretary of the CPC and possibly even the august title of chairman. While most observers believe he will easily win a third term, there are institutional hurdles to overcome. The CPC’s rules technically prohibit more than two terms for party leaders, although they currently allow for a single extension. In addition, Xi Jinping will be past the customary retirement age for party leaders (68). It follows that he is anxious to avoid any major missteps before the National Congress convenes.

China still depends heavily on trade with the United States, Europe, and Japan, despite recent moves to expand economic ties with the countries of ASEAN (Association of Southeast Asian Nations) and other non-Western partners. Open support of Russia’s actions could trigger sanctions that would hurt the Chinese economy, a scenario Xi is keen to avoid with the National Congress approaching. Such considerations, it seems, have impelled Beijing to adopt an increasingly neutral stance on the war, after its initial expressions of support for Moscow’s demands. By the same token, the need for Xi to play it safe ahead of the National Congress will probably keep Beijing from playing a proactive role in brokering a peace, given the high risk of failure.

Russia’s Role in the China-US Rivalry

An important long-term factor to keep in mind when analyzing Beijing’s stance on the Ukraine conflict is that it views Russia as a critical strategic partner in its bid to challenge the dominance of United States and its allies—a struggle China expects to continue toward achieving its goal of becoming a “great modern socialist country” by the centenary of the People’s Republic of China in 2049.

The face of the budding China-Russia partnership was on vivid display early in February this year, as Russian President Vladimir Putin met with Xi Jinping on the eve of the Beijing Winter Olympics (from which Russia was officially banned). The Chinese greeted Putin with great fanfare, showing him a warmth and deference no other leaders were accorded. The state-run media ran lavish coverage of the meeting, including photos of Xi and Putin conferring unmasked. In a joint statement, Putin and Xi stressed wide-ranging strategic bilateral cooperation while criticizing the Cold War mentality of the Western nations and calling for a halt to NATO expansion. China also committed to additional purchases of natural gas from Russia. It is unclear whether Putin let Xi in on his plans to invade Ukraine at this time. But if he did, he probably also assured him that Russian forces would have the country under control in a couple days’ time—in other words, between the end of the Winter Olympics and the opening of the Paralympic Games.

In a video news conference on March 7, Chinese Foreign Minister Wang Yi asserted unequivocally that the situation in Ukraine made no difference to China’s relations with Russia. Stressing Russia’s importance as a neighbor, a fellow member of the UN Security Council, and a key strategic partner, he called the China-Russia relationship “rock solid,” adding, “No matter how perilous the international situation, China and Russia will maintain their strategic focus and continuously advance our comprehensive strategic partnership for the new era.”

Close But Not Too Close

It should be stressed, however, that China and Russia are not allies. Since the early 1980s, Beijing has embraced nonalignment as a pillar of its foreign policy. Moreover, the two countries’ national interests do not always coincide. From a long-range standpoint, Russia, as the world’s second largest military power, is also a rival that China must outstrip to reach its centenary goals.

Partnership notwithstanding, Xi Jinping is leery of being lumped with Putin as a “murderous dictator.” Nor does he wish to be viewed as complicit in Russian aggression, which clearly violates China’s “five principles of peaceful coexistence.” In addition to exposing China to the possibility of damaging sanctions from the West, overt support for the invasion could undermine China’s long-term global strategy, which hinges on gradually winning over a majority of the world’s developing countries and portraying the American-led West as an antiquated elite. Among most of the developing countries, non-intervention and respect for national sovereignty are sacred principles. Any statement or action by Beijing condoning Russia’s military intervention would invite the criticism and suspicion of the countries it is working so hard to court. This is why China, while refusing to condemn Russia outright, has stressed that “the sovereignty, independence, and territorial integrity of any country should be respected and safeguarded.”

Beijing regards the UN General Assembly as an important tool for amassing international clout, and it cannot but feel threatened by the resolutions that have passed the assembly of late. On March 2, an American-supported resolution criticizing Russia and demanding its withdrawal from Ukraine passed with 141 votes in favor. When the focus is placed squarely on the issue of national sovereignty, even countries like Cambodia are willing to join forces with the United States. (That said, Beijing can take some comfort from the dozens of countries throughout Eurasia and Africa that joined with China in abstaining from the vote.)

China’s relationship with Ukraine should also be mentioned in this context. After establishing diplomatic ties in 1992, the two countries issued a number of joint statements laying the foundation for a strategic partnership of their own. In 2013, their leaders signed the Treaty on Friendship and Cooperation Between China and Ukraine, which includes a statement of Chinese support for efforts by the government in Kyiv “to protect the unity and territorial integrity of Ukraine.” In a joint declaration issued around the same time, China—reiterating a 1994 statement—pledged “unconditionally not to use or threaten to use nuclear weapons against Ukraine as a non-nuclear-weapon state and to provide corresponding security assurances to Ukraine in the event of aggression or threat of aggression against Ukraine using nuclear weapons.” Although these assurances may not constitute ironclad guarantees, they do carry some weight in the world of diplomacy.

With regard to the ongoing conflict between Ukraine and Russia, Beijing’s basic position has been that implementation of the 2015 Minsk Agreement, mediated by France and Germany, is the only practical means of resolving the situation. In a virtual summit with the leaders of France and Germany on March 8, Xi Jinping reiterated this stance, along with his opposition to economic sanctions. Overall, China has endeavored to keep relations with the European Union on a positive footing, while stepping up criticism of NATO as a relic of the Cold War.

The underlying Chinese objective, it seems clear, is to get the EU countries to break from Washington and pursue their own solution to the Ukraine problem. However, quite the opposite has occurred. For now, the crisis in Ukraine has brought Europe closer to the United States than ever, reversing the push for “strategic autonomy” led by French President Emmanuel Macron.

As I indicated above, President Xi is anxious to avoid any taint of failure, and for that reason is unlikely to take the initiative in mediating a settlement between Ukraine and Russia. At the same time, Beijing is eager to project the image of a responsible, peace-loving country that the world can count on in a crisis. This explains why Xi agreed to talks with US President Joe Biden, while in all probability viewing them as a waste of time.

According to Foreign Minister Wang Yi, China has been performing the role of mediator ever since the start of the invasion. For example, in a phone conversation the day after the operation began, Xi Jinping is said to have urged Putin to negotiate a ceasefire with Ukraine and to have received a positive response. Xi’s initiative in holding a virtual summit with the leaders of France and Germany is also cited as evidence of his sincere desire to broker a peace. The truth is that China has repeatedly called for an end to the violence, and it has provided humanitarian assistance to the victims as well.

Beijing has also been pressuring Hungary and other nearby countries to step up their support for refugees from the conflict. The main motive here is to safeguard the welfare of Chinese citizens residing in Ukraine, who have faced numerous hardships since the invasion began. Protection of Chinese nationals abroad is an issue taken very seriously within China, and Xi Jinping has been at pains to demonstrate his commitment to the cause.

Implications for Taiwan and Japan

Beijing will doubtless take away a number of lessons from the situation in Ukraine, including the high cost of armed aggression. This is not to imply that China was seriously planning such a move against Taiwan. Although Xi Jinping explicitly refused to rule out the use of force as a tool of reunification in January 2019, there has been no mention of the military option since then. Instead, China has ratcheted up efforts to infiltrate Taiwanese politics, influence public opinion, and nurture pro-unification forces, while also engaging in gray-zone military intimidation and harassment. However, the success of this strategy of “subduing the enemy without fighting” is anything but certain.

Russia, too, worked hard to beef up pro-Russian elements within Ukraine, but those efforts did not pay off as anticipated. Unlike the relatively effortless annexation of Crimea in 2014, the latest invasion of Ukraine has run into fierce resistance. If anyone in China was seriously contemplating an armed takeover of Taiwan, Russia’s difficulties in Ukraine will surely cause them to think twice, or, at the very least, to postpone such plans until an easy victory is within reach.

China’s leaders will also have taken note of the international response to the war. In addition to triggering a wide range of sanctions against Russia, the invasion has boosted Ukraine’s international stature and unified the West in Kyiv’s defense, accelerating efforts by Ukraine and other former Soviet republics to join the European Union. By the same token, any move by China to seize Taiwan by force could spur the leading democracies to extend Taiwan official recognition, an outcome Beijing is anxious to avoid.

In short, Russia’s invasion of Ukraine has been a cautionary tale for Beijing, underscoring the challenges and consequences of armed aggression. Of course, a clear-cut Russian defeat would provide the most powerful deterrent, but even a partial victory is likely to seem hollow given the high cost.