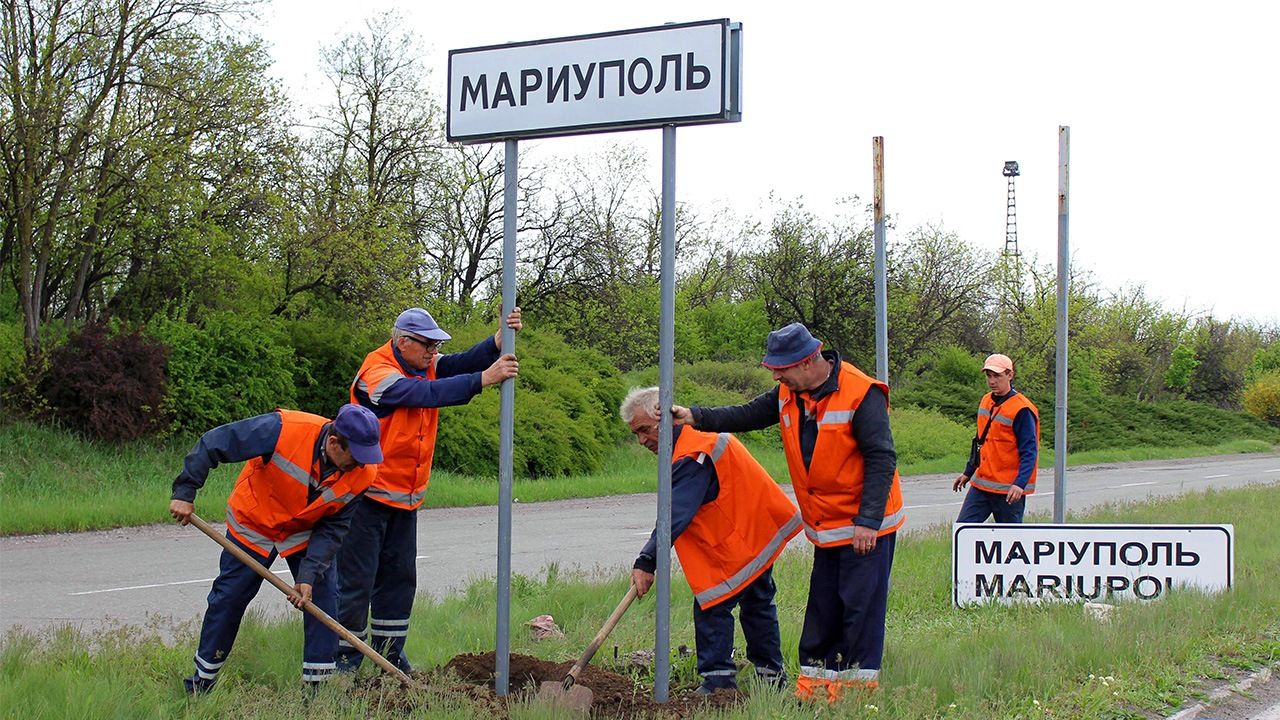 Politics Sep 7, 2022
Russia’s invasion of Ukraine has drawn attention to its relations with so-called “unrecognized states.” Russia uses states like Luhansk and Transnistria (Moldova) to influence the politics of internationally recognized sovereign states in Russia’s “near abroad” that were formerly part of the Soviet Union. There are, however, signs of changing relations between Russia and these entities, notably including the recent electoral defeat of a pro-Russian incumbent in South Ossetia.

War and conflict have been regular occurrences in the former territories of the Soviet Union. The outcome has been numerous “frozen conflicts” or “prolonged/protracted conflicts,” and an increase in the number of so-called “unrecognized states.” Simply understood, an unrecognized state is a political entity that “declares independence from a sovereign state, has the appearance of a state, call itself a state, but has not received international state recognition.” The University of York’s Nina Caspersen has formulated a more precise definition of unrecognized states:(*1)

Currently, there are six unrecognized states within the territory of the former Soviet Union: Abkhazia and South Ossetia in Georgia, the Nagorno-Karabakh Republic, or NKR, in Azerbaijan, Transnistria in Moldova, and Donetsk and Luhansk in Ukraine. These unrecognized states have often been vectors for Russian influence in Russia’s “near abroad”—the sovereign states outside of Russia’s official boundaries but within Moscow’s sphere of influence as former parts of the Soviet Union. 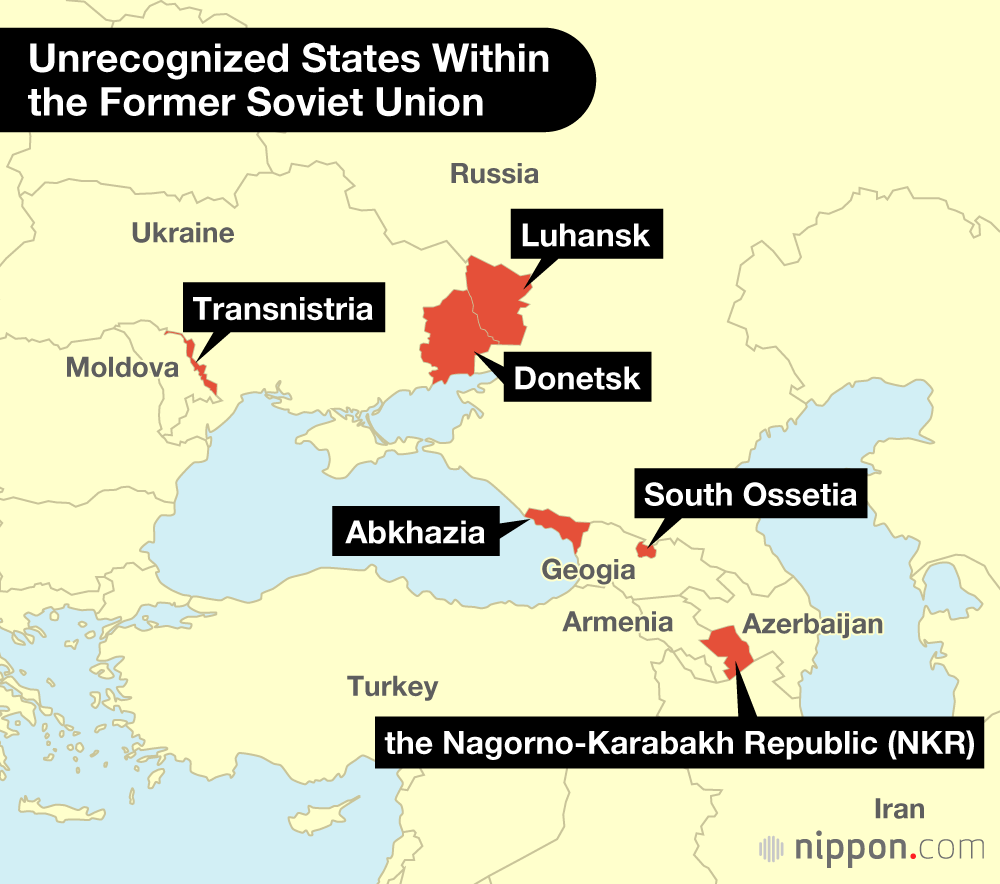 Russia is often the patron of these unrecognized states and exerts great influence over their politics. Russia also uses these entities to strategically constrain and influence the domestic and foreign policies of the anti-Russian and pro-Western sovereign states in its near abroad. The one exception is the NKR within Azerbaijan. Russia had little influence there until the Second Nagorno-Karabakh War between Azerbaijan and Armenia in 2020. Azerbaijan emerged victorious and captured about 40% of the Nagorno-Karabakh region, including districts it had lost in post–Cold War conflicts. Russia brokered a peace deal that included deploying Russian troops in the remaining 60% of the territory for peacekeeping. This means Russia has some influence, but Armenia remains the patron state of the still unrecognized NKR.

In any respect, for these unrecognized states to have the desired impact on the sovereign states in Moscow’s sphere of influence, they should not become independent, and they should not be annexed by Russia. They need only continue to exist as an entity within the territory of the legally sovereign state that is not subject to administrative control by that state.

However, after the 2008 Russo-Georgian War, Russia recognized Abkhazia and South Ossetia as states within Georgia and started promoting de facto integration into Russia. My assumption was that Russia essentially recognized the sovereignty of Abkhazia and South Ossetia as an act of revenge—several countries in the international community had just recognized Kosovo as a state within Serbia, infuriating Russia and China.

Russia has, however, made further irrational moves of late. Following its annexation of Crimea in 2014, Russia supported pro-Russian armed groups in the provinces of Donetsk and Luhansk in their fight against Ukrainian government forces. This essentially enabled the creation of two unrecognized states in Ukraine’s southeastern Donbas region. On February 21, 2022, however, Russia suddenly recognized the sovereignty of Donetsk and Luhansk.

This worked against Russia’s traditional strategy in its near abroad. The Minsk Accords of 2014–15 had ended the civil war between pro-Russian militants and Ukrainian government forces in eastern Ukraine while granting considerable autonomy to the two provinces in the Donbas region. This autonomy would complicate any Ukrainian moves to join NATO, assuming these provinces opposed it. Keeping these two states unrecognized but within Ukraine was a trump card for Russia and was recognized as the most inexpensive, effective, and optimal strategy for Russia wanting to keep Ukraine within its sphere of influence. However, Russia recognized the independence of Donetsk and Luhansk, and three days later directly invaded Ukraine, bringing the Donbas region under its direct control.

Near Abroad Countries Distance Themselves from Russia

These acts not only represent a shift in Russia’s policy towards unrecognized states but are also driving changes in Russia’s relationship with these entities, as well as with the sovereign states of the former Soviet Union.

For example, Russia’s invasion of Ukraine has resulted in the deterioration of perceptions of Russia amongst the residents of Donetsk and Luhansk. They have completely turned their backs on Russia due to the brutality of Russia’s invasion. Not even these two states—let alone the whole of the Ukraine—were eager to come under Russia’s control. While the possibility of Russia using intimidation and fear to annex territory was never beyond imagination, the only way Russia can pacify these regions is through a perpetual politics of fear and occupation. There is no way to envision a positive future for the region under these circumstances.

Another outcome is that Russia’s military struggles in Ukraine have encouraged the sovereign states in Russia’s near abroad to distance themselves from Moscow. These countries have been surprised by Russian weakness and are no longer fearful of the country’s power. For example, all members of the Russian-led Collective Security Treaty Organization except Belarus criticized the Russian invasion. Azerbaijan even invaded the NKR in March, despite the presence of Russian peacekeepers.

The tendency to disregard Russia’s preferences stood out in the unrecognized state of South Ossetia in Georgia. Although South Ossetia is extremely loyal to Russia and was open to integrating with North Ossetia in Russia (the Caucasus Mountains divide North and South Ossetia), about 300 South Ossetian soldiers refused to deploy to Ukraine after fighting began. In the state’s presidential run-off on May 8, the Russian-backed incumbent President Anatoly Bibilov, who had been leading the charge towards integration with Russia, lost to Alan Gagloev. Gagloev better reflected the sentiments of the residents of South Ossetia, who are now apprehensive about hasty integration into Russia. Although Russia in the past probably would not have hesitated to intervene and even force a redo of elections that did not turn out in its favor, Moscow notably did not take any action. This strongly suggests that Russia’s grip on its sphere of influence is weakening.

Possibly the unrecognized state that has attracted the most attention throughout the Ukraine crisis is Transnistria (the Pridnestrovian Moldavian Republic). Transnistria is located near Odessa in southern Ukraine. If Russia asserted control over the entirety of Ukraine’s Black Sea coast, it would link up with Transnistria, providing a launchpad for completely suppressing southern Ukraine. Along with Russia’s movements on the southern front, observers have paid careful attention to events in this part of the region.

In fact, in April a few months after Russia initiated hostilities against Ukraine, the buildings of security authorities in Tiraspol (Transnistria’s “capital”) were rocked by a series of bombings. While this was seen as a provocation by Russia, there were fears of a Russian “false flag” operation that would justify Russia attacking the Ukraine from Transnistria. In the end, nothing serious happened. However, the threat to Transnistria and the potential for its involvement in the war has certainly increased following Russia’s invasion of Ukraine.

Not long after, tensions surrounding Transnistria entered a new phase when Moldova, the internationally recognized sovereign of Transnistria’s territory, announced its candidature for the European Union alongside Ukraine on June 23.

Transnistria is likely to be a stumbling block to Moldova’s EU accession. Russia will likely become more involved in the future if Moldova’s accession seems likely. However, Russia seems to think that Moldova’s accession to the EU will take some time—perhaps as long as a decade—or may not succeed at all.

The residents of Transnistria see things differently. They believe that Moldova candidature for EU membership will push Russia into action to help Transnistria integrate into Russia. It appears that Transnistrian elites have been particularly enthusiastic about integration with Russia following Moscow’s 2014 annexation of Crimea.

On the other hand, Moldova seems to believe that if it succeeds in becoming a member of the EU, the opportunity for residents of Transnistria to work and live throughout the EU will be highly positive and persuasive. Moldova is therefore hopeful that EU membership will allow it to reintegrate Transnistria. Russia, Transnistria, and Moldova appear to have interpreted the current situation in very different ways, and the positions of the three parties are likely to diverge further.