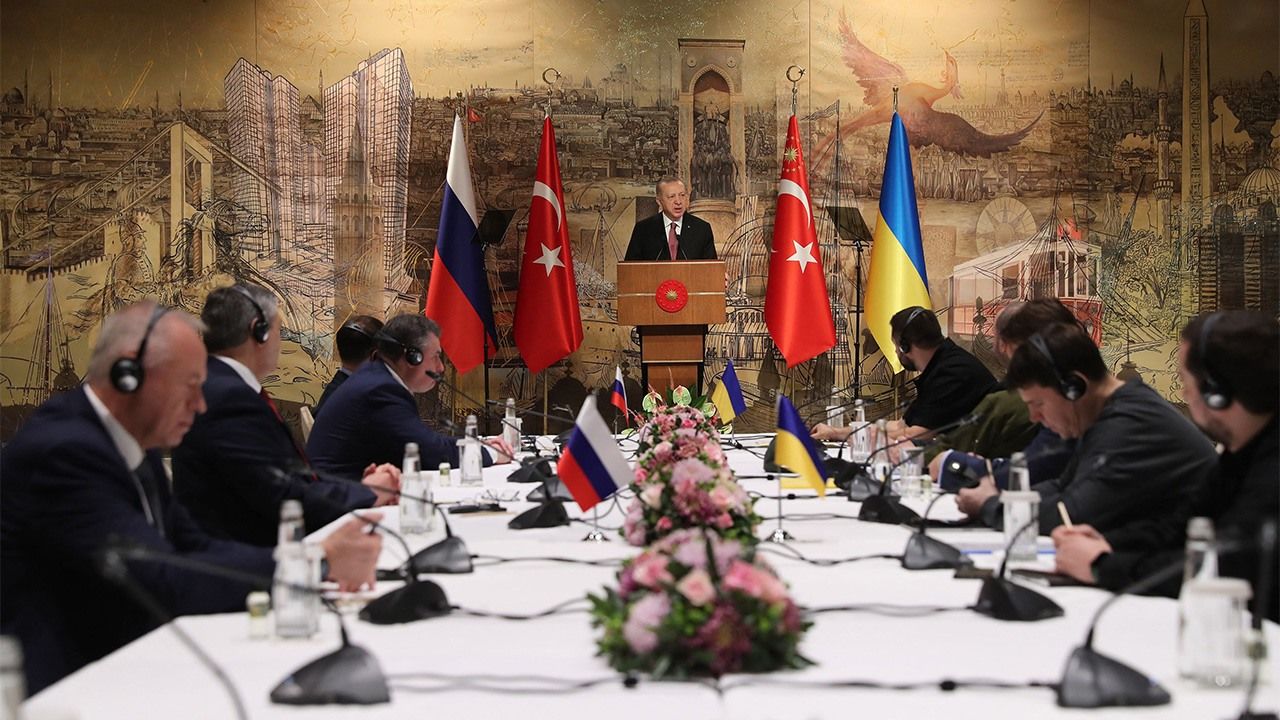 Politics Aug 25, 2022
Turkey’s diplomatic profile has risen substantially since Russia launched its invasion of Ukraine. Imai Kōhei draws on his expertise in Turkish politics and foreign policy to analyze Ankara’s response to the war and its fallout, including Finland and Sweden’s applications for NATO membership.

Turkish diplomacy has been in the spotlight amid the turmoil of the Russia-Ukraine war and the ongoing backlash from the international community. In the following, we will examine Turkey’s role as a mediator in the conflict, as well as its controversial response to Finland and Sweden’s applications for NATO membership.

As a member of the North Atlantic Treaty Association with close ties to both Russia and Ukraine, Turkey has stepped up to the plate in the capacity of mediator since Russia launched its invasion of Ukraine. While condemning Moscow’s actions, Ankara has also opposed Russia’s ostracism by the international community. Since the start of the crisis, it has been working actively with governments around the world—especially Moscow and Kyiv—to broker a solution.

On March 10, the first post-invasion bilateral foreign ministers’ conference was held in Istanbul. To arrange and advance those talks, President Recep Tayyip Erdogan met with policy makers from Russia. Ukraine, and other countries on about 15 separate occasions, while Foreign Minister Mevlut Cavusoglu attended roughly 40 such meetings. The Turkish government continued its efforts after the conference, as by hosting a meeting of senior Russian and Ukrainian officials on March 29. Turkey has also been mentioned as a favorable venue for a summit between Russian President Vladimir Putin and Ukrainian President Volodymyr Zelenskyy, should the two sides agree to talks.

The West has looked less favorably on another performance by Erdogan in the diplomatic arena, that is, his reaction to bids by Finland and Sweden to join NATO. In mid-May, the two Nordic countries announced their desire to enter the alliance in response to Russia’s invasion of Ukraine and the broader threat it posed. Among NATO’s members, only Turkey raised objections, but Ankara’s opposition alone was enough to derail the expansion, since the accession of any new member requires the unanimous approval of current member states.

In opposing Finland and Sweden’s bids, Erdogan cited Turkish national security concerns centered on the Kurdistan Workers’ Party, or PKK, a militant group designated a terrorist organization by Ankara. Erdogan pledged to block both Nordic countries’ accession on the grounds that they were harboring key figures associated with the PKK accused of carrying out terrorist attacks in Turkey. He also cited the arms embargo that Sweden and Finland had imposed against Turkey in response to the latter’s October 2019 cross-border attacks on Kurds in northern Syria (although Britain and Germany have implemented similar sanctions).

For Turkey, the PKK is not an issue to be taken lightly.

Fighting between the PKK and Turkish forces has gone on for almost four decades (despite periodic ceasefires)—ever since the organization launched its insurgency in 1984. By 2016, an estimated 30,000–40,000 lives had been lost to the conflict, and the International Crisis Group reports that 6,030 people were killed from July 2015 to the end of June 2022. During those last seven years, PKK militants have accounted for the vast majority of casualties. But the toll also includes 1,331 Turkish troops, and each time a Turkish soldier dies in the line of duty, the newspapers and other media prominently feature photos of the deceased and the grieving family. Such coverage has fueled deep anger toward the PKK among the Turkish people.

The PKK was formed in the late 1970s under the leadership of Abdullah Ocalan. Linking leftist ideology with Kurdish nationalism, the organization was initially devoted to armed struggle aimed at the creation of an independent Kurdish state. However, as the goal shifted to Kurdish autonomy, the PKK divided its campaign between armed resistance and political activism.

Europe quickly emerged as an important base for the PKK, which could count on the Kurdish diaspora for financial and other support. The National Liberation Front of Kurdistan (ERNK), the European arm of the PKK, was founded in Germany in March 1985, just months after the PKK launched its insurgency against the Turkish government. From the late 1980s on, the PKK became more and more active in Europe, aided by the rapid development of the internet. Its expansion was particularly conspicuous in Denmark, France, Germany, the Netherlands, and Sweden.

The PKK’s armed struggle lost much of its ferocity after Ocalan was captured and imprisoned by Turkish authorities in 1999, but its political activities in Europe continued unabated. Incidentally, there are currently an estimated 100,000 Kurds living in Denmark and about 15,000 in Finland, although naturally most do not support the PKK.

The 2009 Compromise and Election Strategy

The Turkish government’s recent reaction to the membership applications of Finland and Sweden recalls its response back in 2009 to the candidacy of outgoing Danish Prime Minister Anders Fogh Rasmussen for the post of NATO secretary general.

At the time, some 30,000 Kurds were residing in Denmark, and PKK-affiliated groups were quite active there. Ankara was particularly incensed over the activities of Roj TV, a pro-PKK Kurdish international television station broadcasting from Denmark. Arguing that Denmark supported anti-Turkish Kurdish terrorism, the Turkish government used its veto power to hold up Rasmussen’s appointment. In the end, it gave the nod to the former prime minister, who ended up serving as secretary general of NATO from August 2009 to July 2014. In September 2010, the Danish government shut down Roj TV, presumably as a quid quo pro. Where Finland and Sweden were concerned, Ankara must have concluded that what worked in the past could work again.

Another factor driving Erdogan’s hard-line response to the Nordic countries’ NATO application may be the fact that he and his ruling party are facing a tough general election in June 2023. With a public approval rating of 44% as of June (according to the polling agency Metropoll), Erdogan could easily lose to the opposition candidate if the election were held tomorrow. Erdogan’s Justice and Development Party, or AKP, seems likely to secure no more than about 30% of the vote, which would preserve its position as the biggest party in the Grand National Assembly but force it to enter into a ruling coalition.

Overall, the biggest factor influencing Turkish elections since 2001 has been the economy. Until the mid-2010s, the economy grew fairly robustly under the AKP, and that success was reflected in election outcomes. But the AKP’s share of the vote has declined in recent years as economic conditions have deteriorated.

The second-biggest factor after the economy is national security. The November 2015 general election provided a vivid example of this dynamic in action. Having lost its parliamentary majority the previous June, the AKP had failed to form a coalition, necessitating a November do-over. In the interim came the October 10 Ankara suicide bombings, the deadliest terrorist attack in modern Turkish history, with a death toll of 103. Security suddenly became the top election issue, and the AKP, with its hard line against terrorism and proven track record on national security, won a resounding victory.

With no end to Turkey’s economic woes in sight, the AKP may well be considering ways to shift the focus to security in advance of the 2023 election. Using the two Nordic countries’ NATO membership application to highlight the Kurdish problem and the Turkish government’s anti-terrorism campaign could be part of that election strategy.

At the June 28 NATO summit in Madrid, Ankara lifted its veto threat after Erdogan met with Swedish Prime Minister Magdalena Andersson, Finish President Sauli Niinisto, and NATO Secretary General Jens Stoltenberg. In return, Stockholm and Helsinki pledged to crack down on PKK terrorists and lift their arms embargo against Turkey. As the office of the Turkish president put it, Erdogan “got what he wanted'’ from the two countries. In the end, Turkey’s threat to use its veto power within the alliance functioned very much as it had in 2009.

On the other hand, it might be expected that the final decision to approve NATO’s expansion would provoke Russian ire and damage Turkey’s relationship with Moscow, undermining Ankara’s position as a go-between. But thus far Russian criticism of Turkey has been muted, and Ankara is expected to continue in its role of mediator for the time being.

That said, the government is likely to shift its focus to domestic affairs ahead of next year’s general election. These and other political movements inside Turkey could decisively affect Ankara’s capacity and willingness to mediate the Russia-Ukraine conflict going forward.